By marathon SILVER 2727
Published on 23rd November 2013
This is Leg 5 of this vacation in Mainland China. I expanded the original FR in French, adding a tourist bonus in the end:

This FR begins in front of the Civil Aviation Building in the city center, at the terminal of the shuttle buses to the airport. As soon as I reach the place, a taxi driver rushes and proposes to drive me there for a flat 20 RMB per person, the same fare as that of the bus. A look at the sign displaying the bus fares: yes, the bus is indeed at 20 RMB, so why not take that taxi?

Guilin is one of the very few cities in China where the taxi drivers wear a seat belt (with Xi'an, if my memory is right). I assume that the local police has an eye on that. See on the right that the meter has not been started.

Guilin is famous for its karstic relief. It is the main attraction of the region, but it does not facilitate the building of an airport, and that of Guilin is quite far from the city. 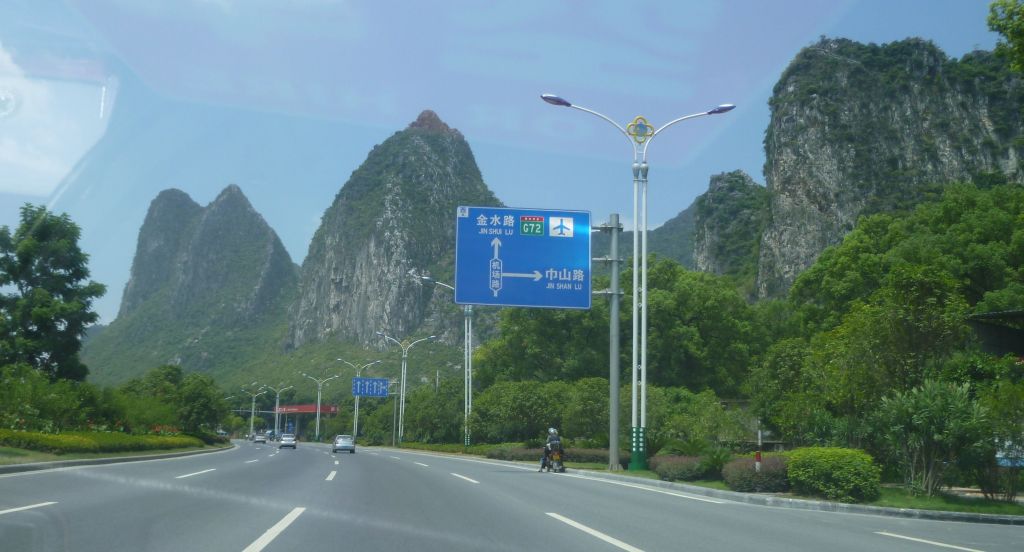 A few hundred meters before reaching the terminal, the driver sets his meter, probably to make believe to a policeman that he had used it all the way. 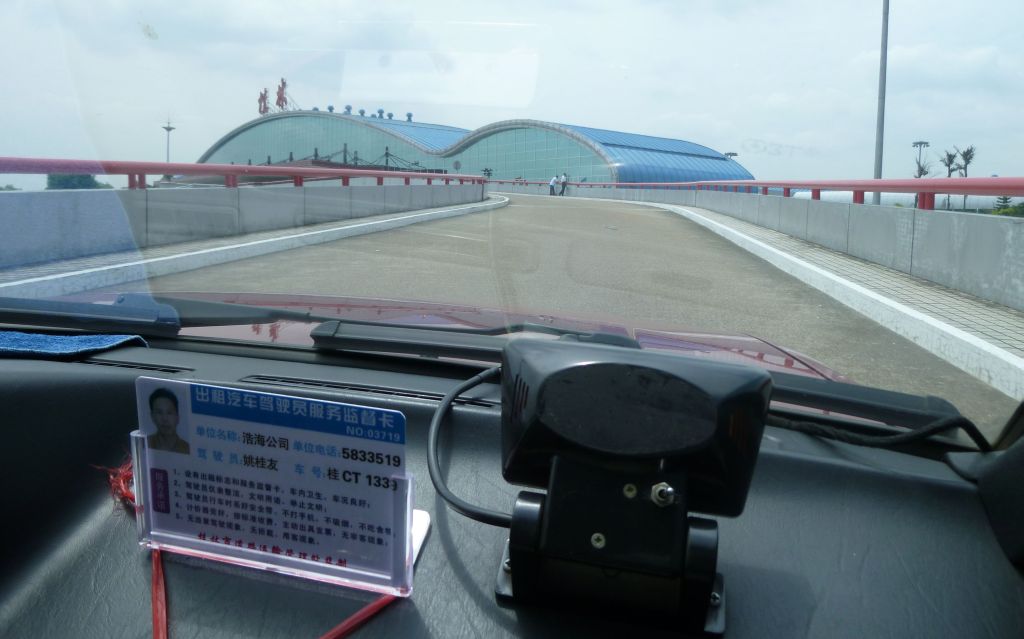 He drops me there, where women wash with lots of water, and immediately begins a tough negotiation for a flat rate to the city with a potential customer. 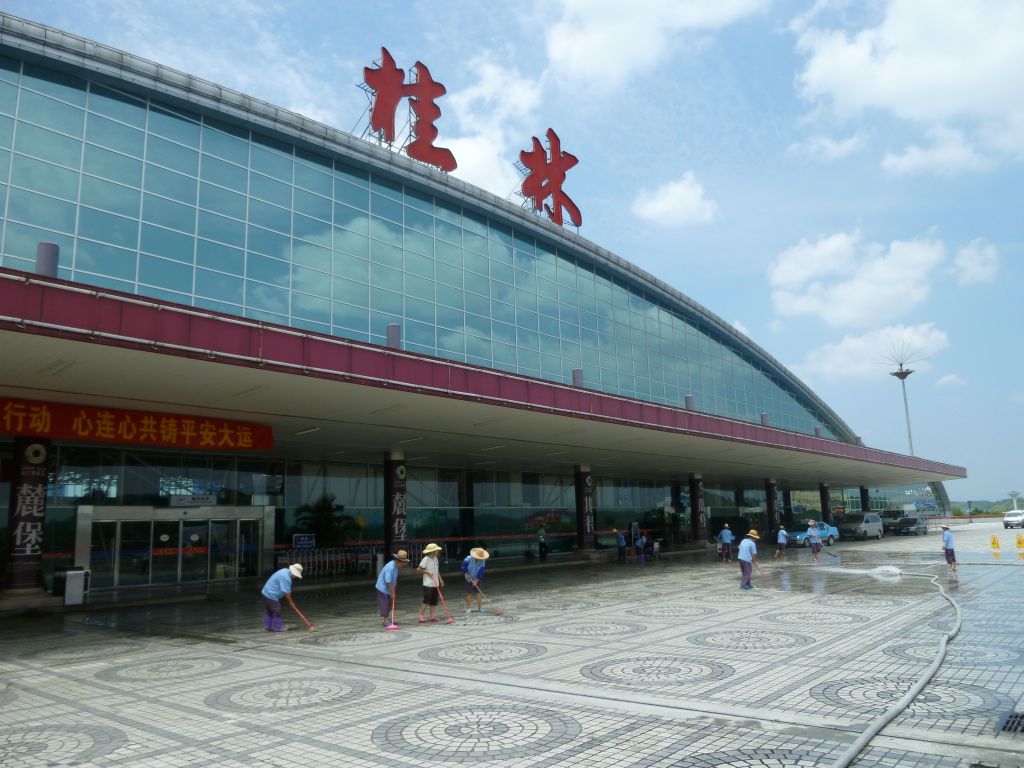 The terminal is decorated with elegant palm trees: trees do not grow well in an air conditioned building, but the plastic has no aging problem. Much fewer than outside where it took unexpected colors.

Contrary to all other Chinese airports that I patronized, of which the list is long, KWL does not have an opening time for checking in.

Even though I had arrived very early, I could check immediately, and was actually the first one, in accordance to number 001, and have a seat on the first row behind two probable rows in J.

Just after the security check, there is an attraction like there could be one in China only: a giant picture of an A380 in Airbus livery, in front of which the passengers can have their picture taken and buy the print. 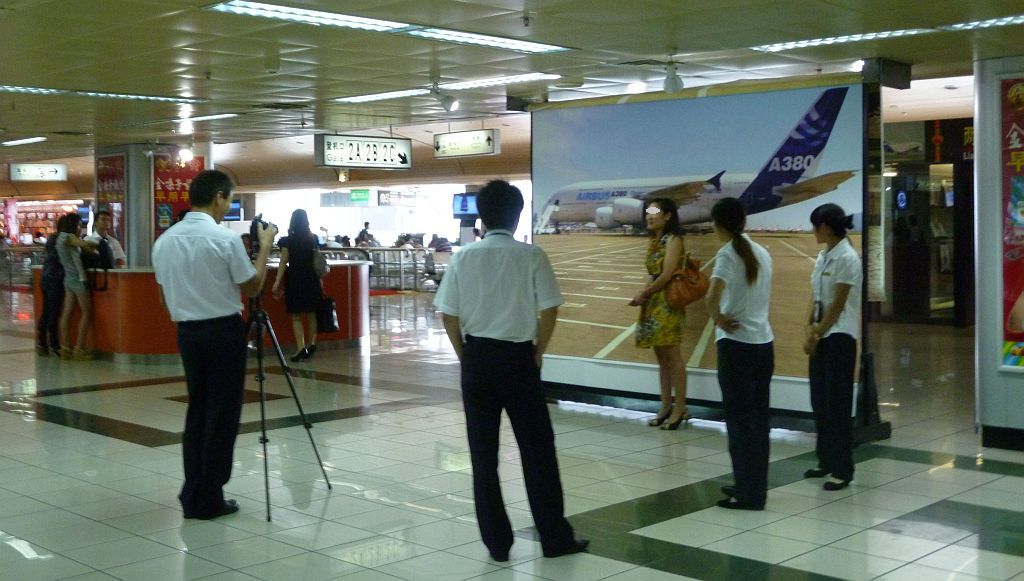 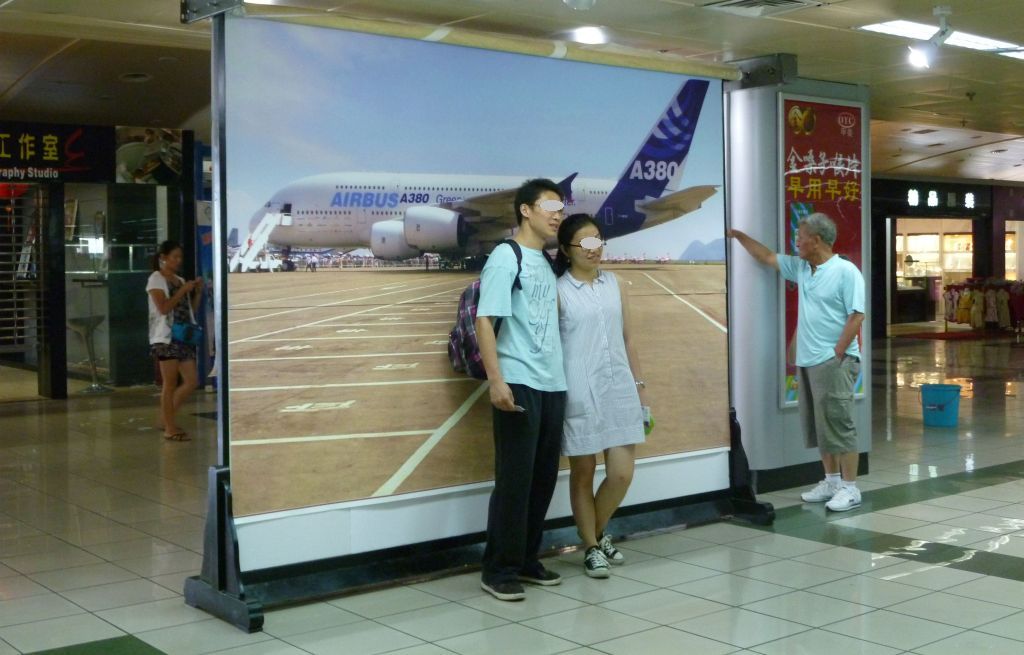 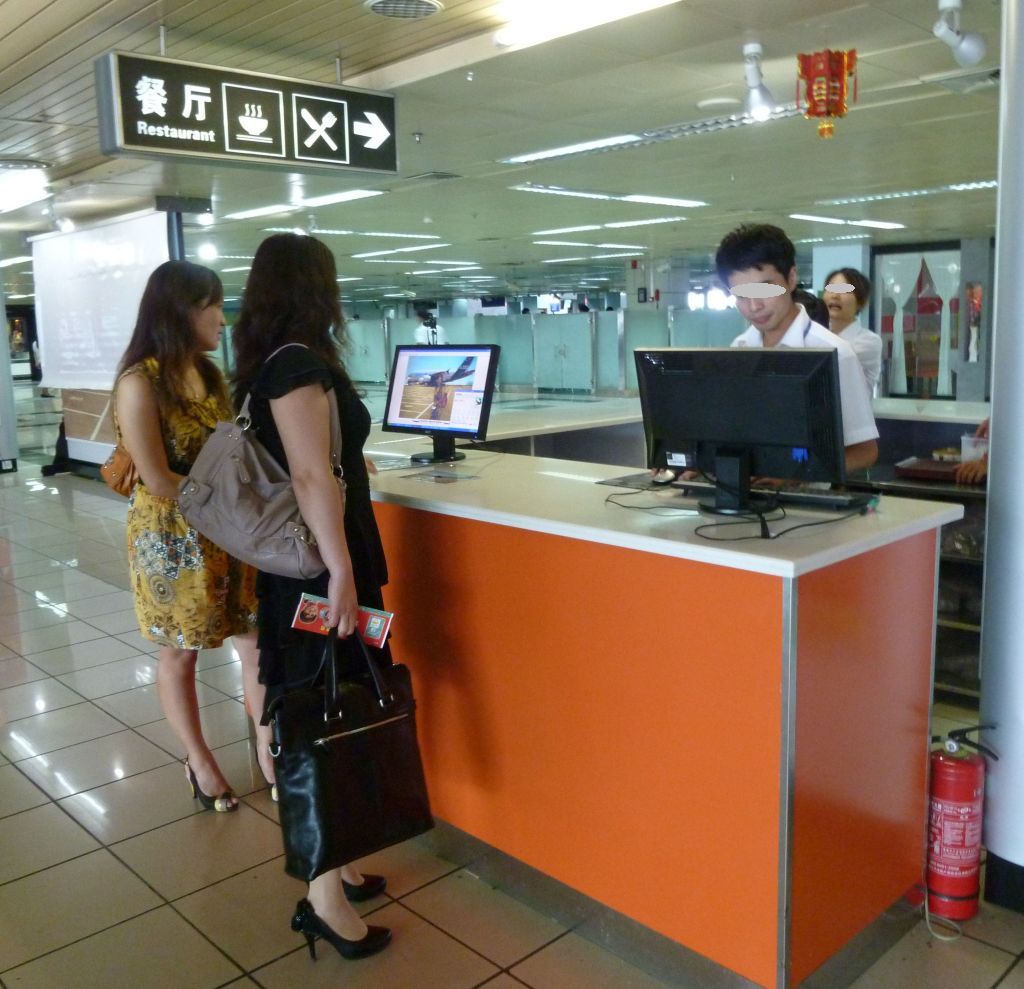 The most interesting thing is that there is a brisk business. Look at this whole group withing in line to have their picture! And if you look closely, you will see that this activity provides work to six people: a photographer, three assistants to attract the customers and order the line, and two staff at the counter. 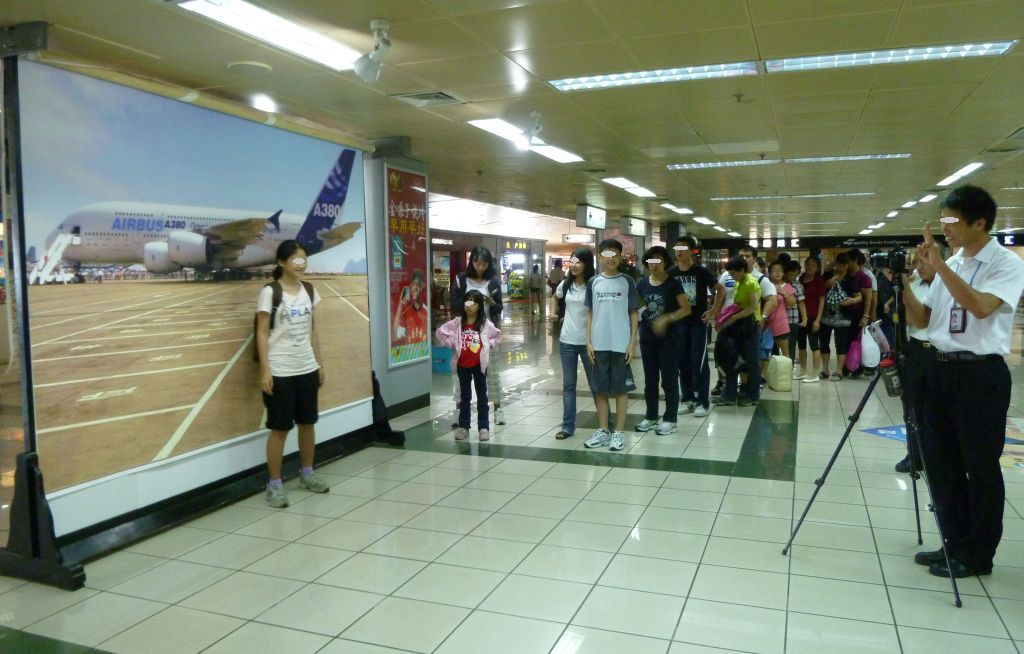 Another perculiarity of KWL is that there is no separation of incoming and departing passengers (in XMN too), using the same jetbridges. On the left, you have the indication of Gate 5, that of my flight, and on the right the exit for the incoming passengers. 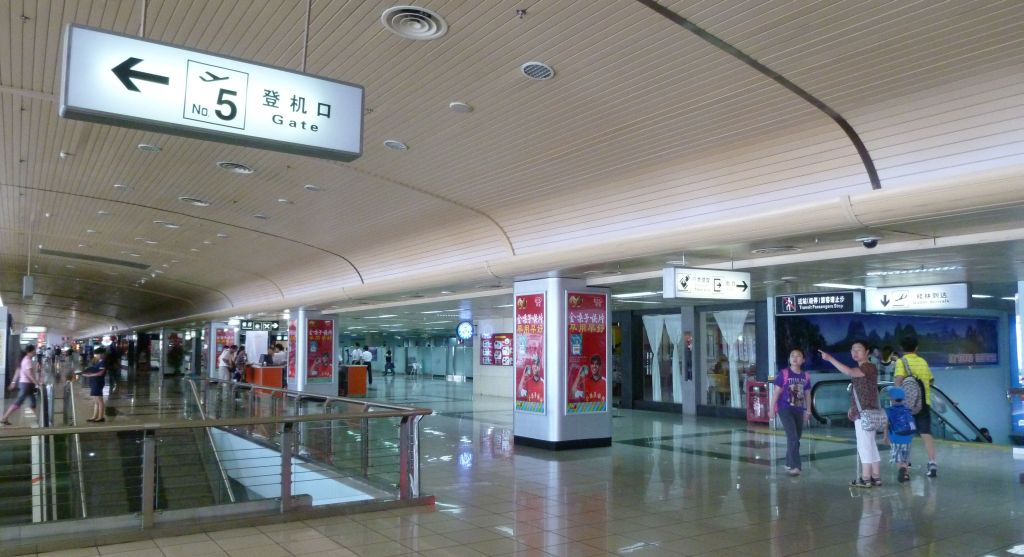 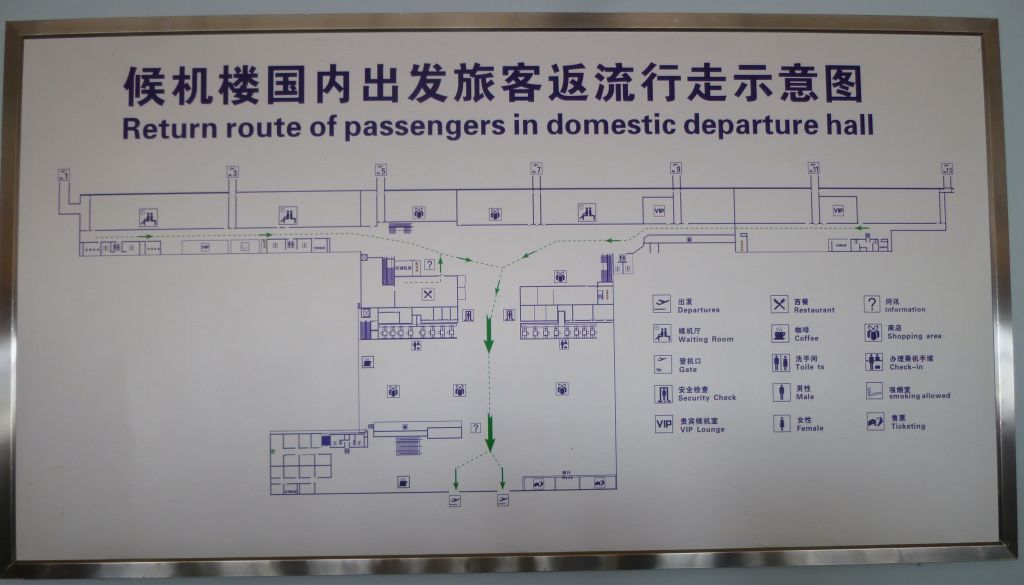 There are electric plugs in one place only, for electrizing mobilephones.

KWL's airside space is quite plane spotter friendly. The lighting is wrong and an anti-UV film has been glued to the windows, but I have seen much worse. This is a sample of the planes serving KWL. 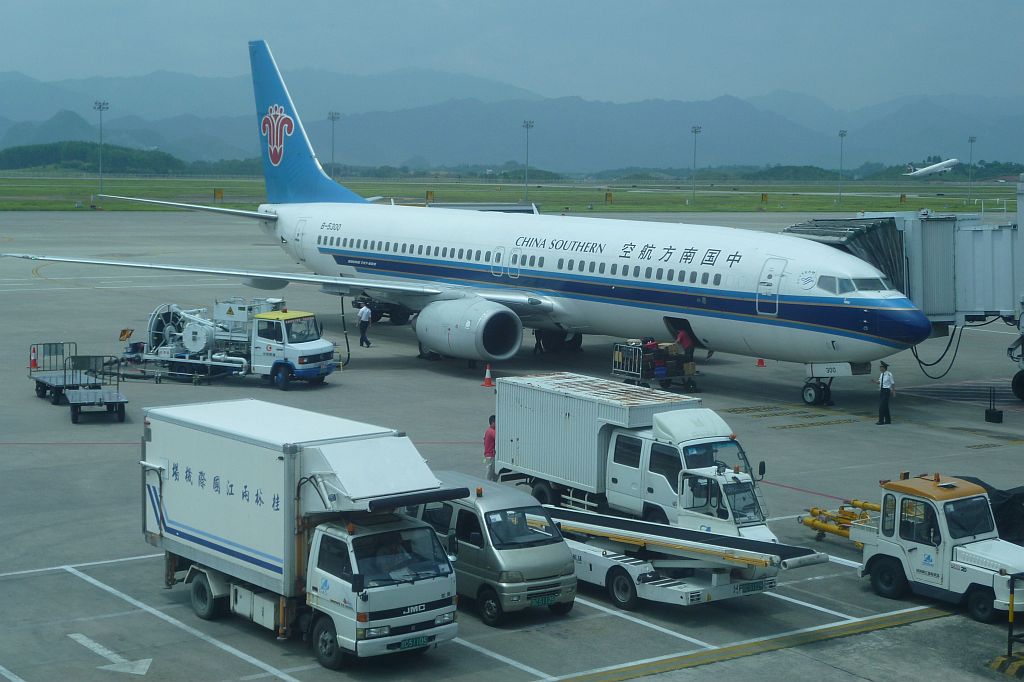 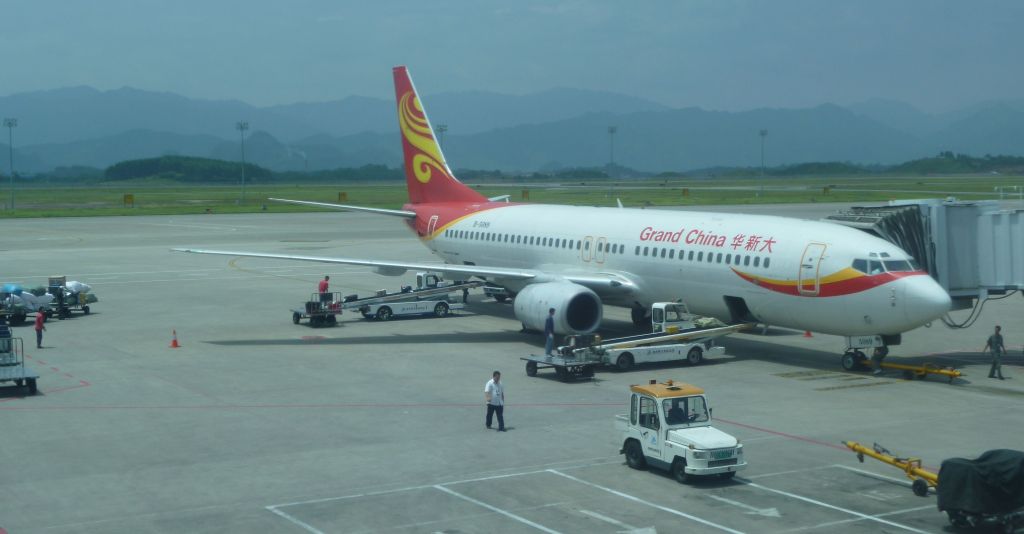 Two China Eastern and Tianjin Airlines mosquitoes are parked in the distance.

Unfortunately, the PA broadcasts continuous boarding announcements at a head shattering noise level. It is by far the worst Chinese airport that I know in this regard. A real torture for my ears.

How about the kids' counter? It is a Fail here too: I only found a tiny padlocked nursery room which is obviously used for storing wheelchairs and prams belonging to the airport. It could not be used for nursing an infant either, since it does not provide any privacy. 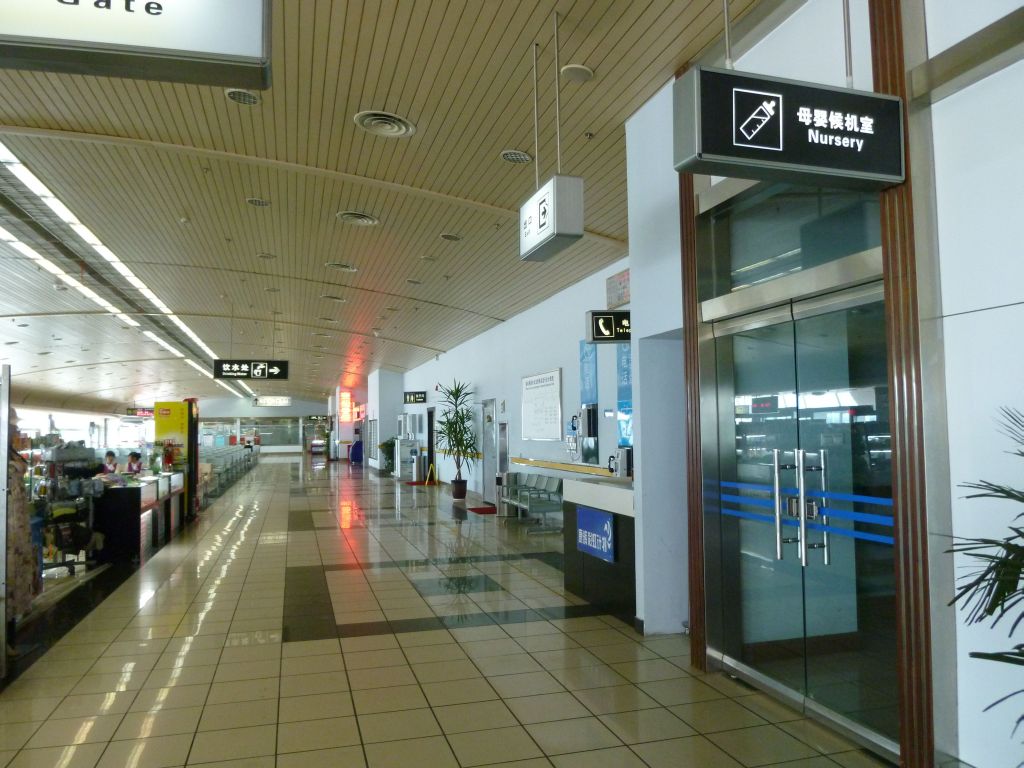 My A319 arrives to the terminal, guided by a Follow me car.

A 320 from the same airline arrives soon afterwards, and parks at the next gate. The first one still has the Dee Air livery, the second has the new Capital Airlines name.

The luggage handlers are as efficient in Guilin as anywhere in China: as soon as the plane has stopped, the hold is opened, the ramp is brought next to the plane and unloading begins. 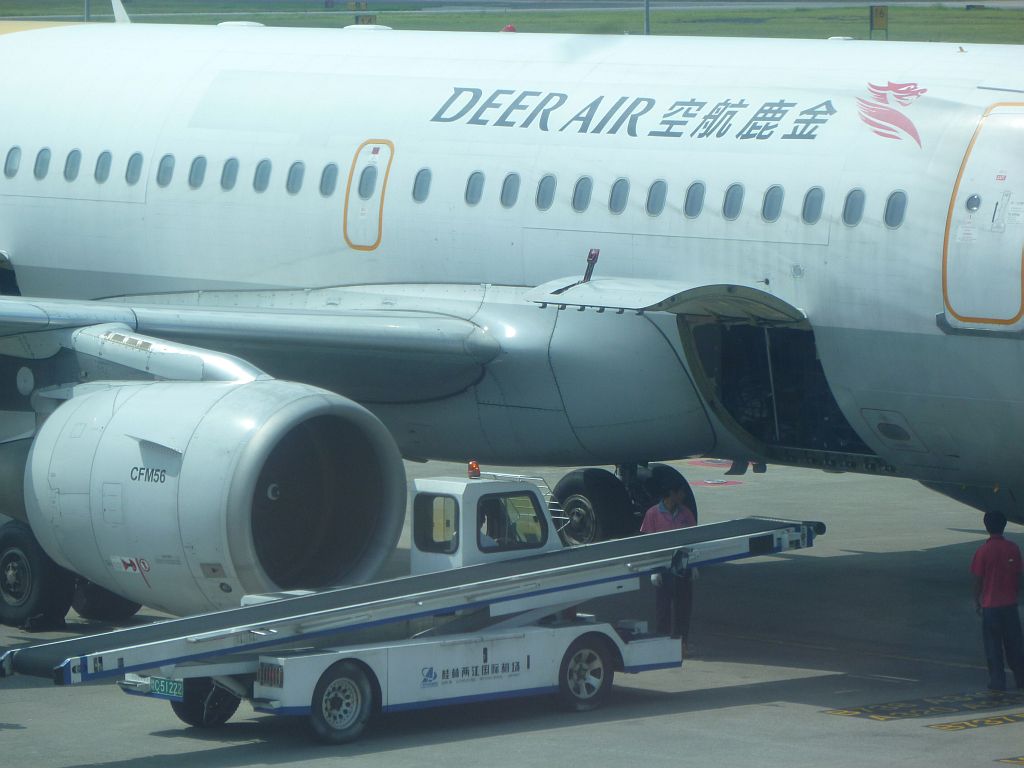 Guilin is actually a stop for that aircraft which is coming from Haikou, on the island of Hainan in the extreme south of China. The origin is no real surprise, because Capital Airlines was recently part of the Hainan Airlines group.

As opposed to the few Chinese domestic flights with a stop that I already took before, all passengers from Haikou have left the aircraft and must board again before the others.


Two passengers from Haikou had obviously misunderstood; the staff is looking for them with a loudspeaker, which does not help making the terminal any quieter.

They come at last, and boarding of the other passengers can start, quite efficiently so. The load factor is at least 85%.

Surprise: there is no business class: the first three rows are red, possibly reserved for Elite passengers. Note the glass partition which shows the FA making the standard announcement. The seat pitch is very comfortable and allowed me to start the French version of this FR on my laptop. 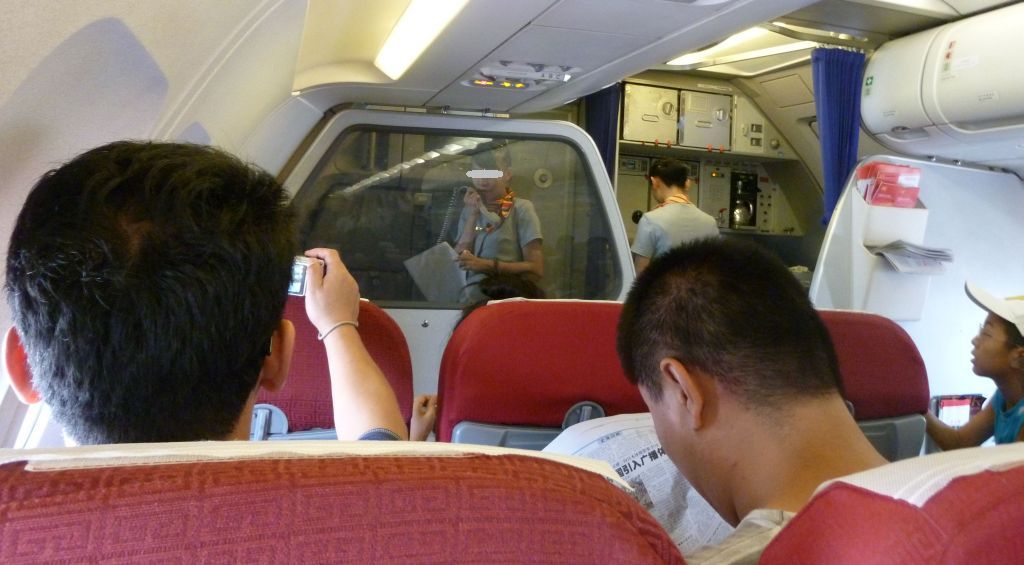 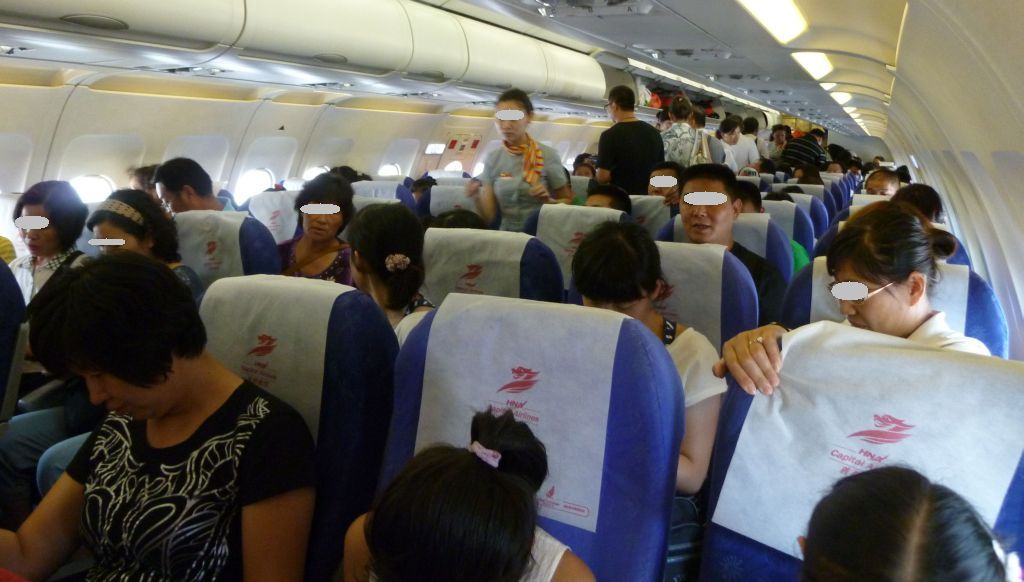 Like on Hainan Airlines, the four FAs are introduced by name to all passengers, each bowing slightly at her name. One of them as a dramatic case of acne, which does stop her from being as friendly as her colleagues. That also makes the airline friendly for keeping her in the staff.

The meal is lighter than the Chinese standard, or improved from the standard of Hainan Airlines, which had taken over Deer Air which became Capital Airlines, and started as a low cost airline. So, no choice : the hot meal is with turnip+rice+beef+potato dish, accompanied with 16 grams of marinated vegetables and a drink (the coffee is with milk, and very diluted). 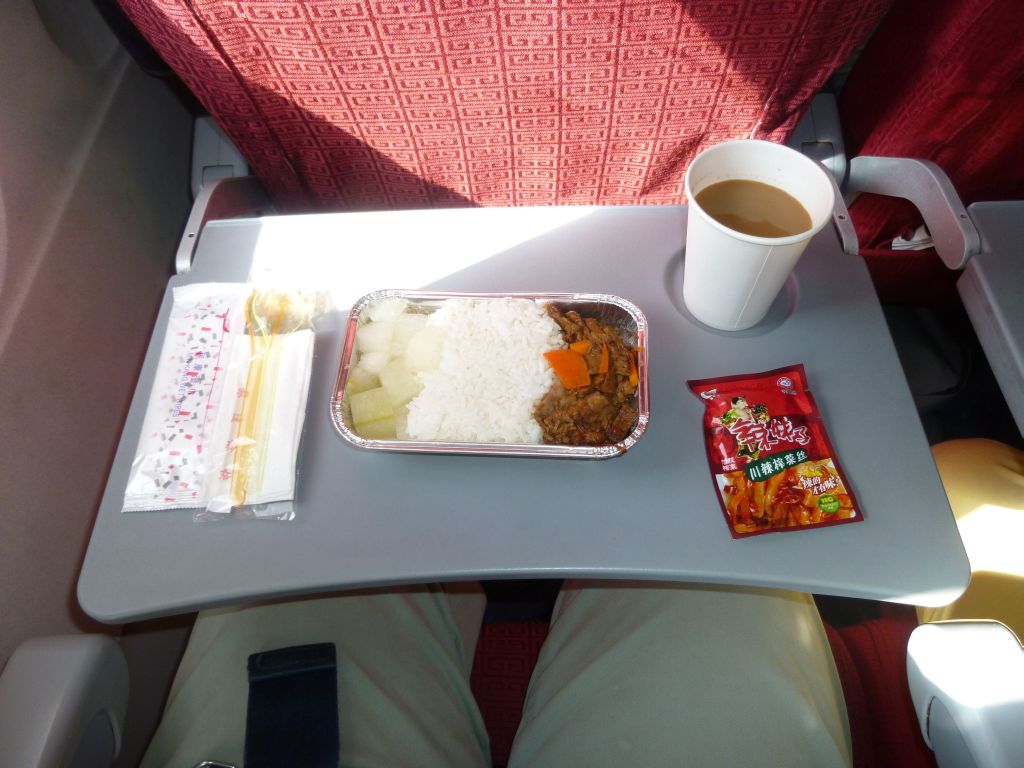 The bright red pack of vegetables deserves a comment: it warns anybody know can read it that it is spiced with Sichuan hot peppers. Few foreigners know that Sichuan province is famous in China for its pepper and red peppers, and for its boundless use in its recipes, shaming Thai and Mexican dishes when it comes to spiciness. If you cannot stand spicy meals, do not consider a job offer in Chengdu! 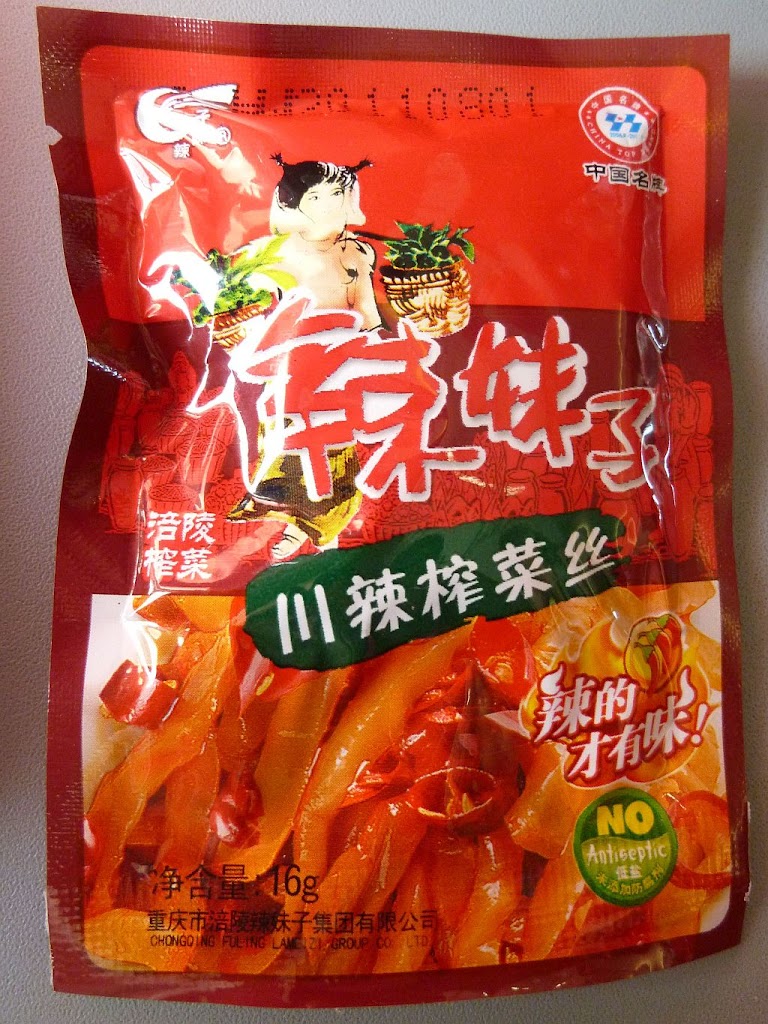 Another unusual feature is that after the meal, an FA makes a sales pitch for various derivatives with the airline's colors: stuffed toys, a watch, a wallet, key rings… I might have been interested by this model, but it was not worth its 260 RMB (29 EUR) price. 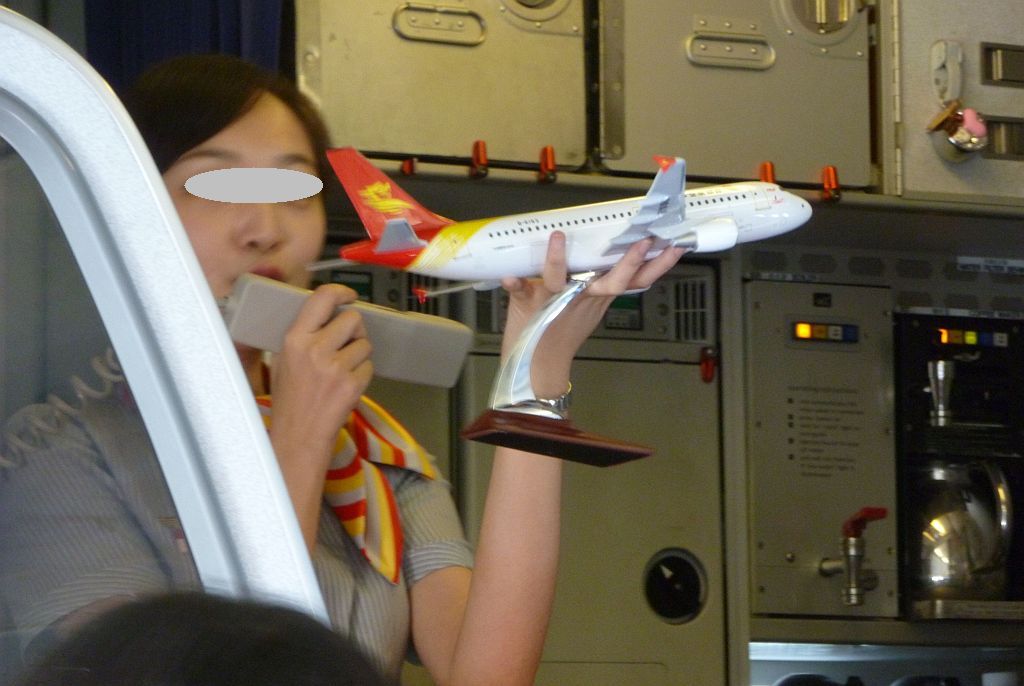 Approach of Jinan, where the weather is very overcast – once on the ground it will look more like industrial pollution. 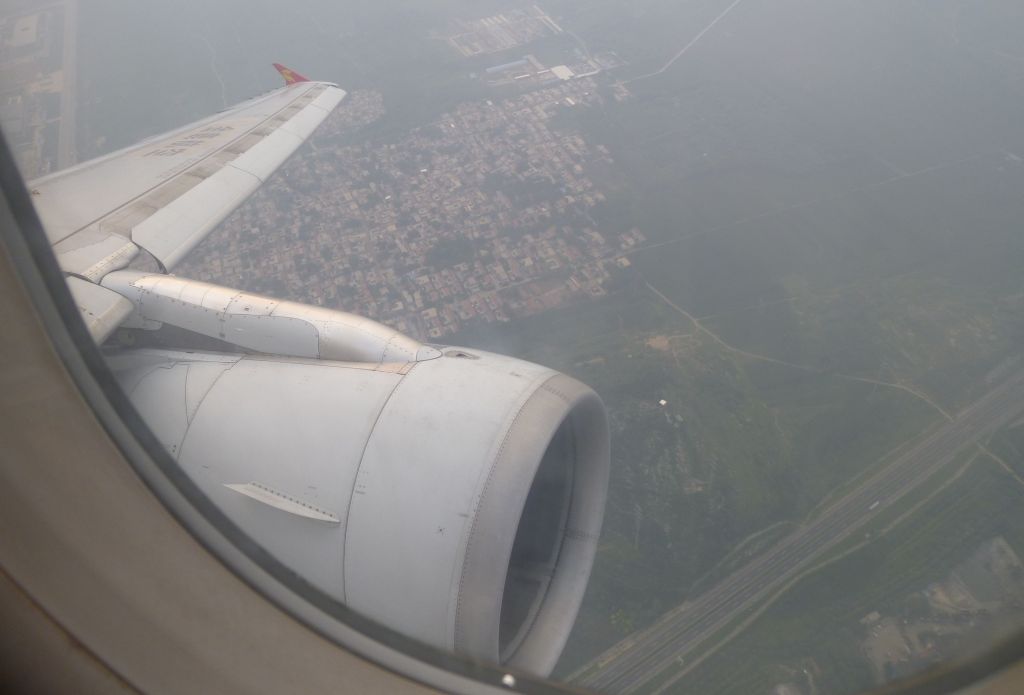 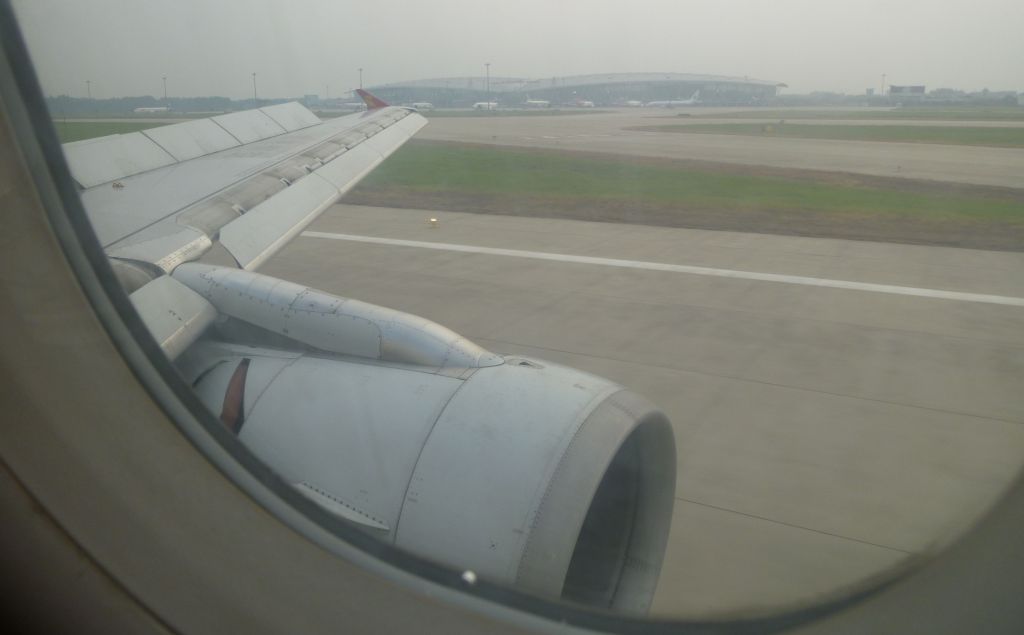 A longish taxiing, behind a 'Follow me' car. Jetbridge or no jetbridge? A last turn towards the terminal, not towards a parking place, not to a remote parking space where a passenger bus and a business minibus are waiting for an Embraer which arrives soon afterwards.

(yes, the picture is very dark, and I chose not to improve it. It was 6 pm; that give you an idea of the air quality…)

A last look at the cabin. 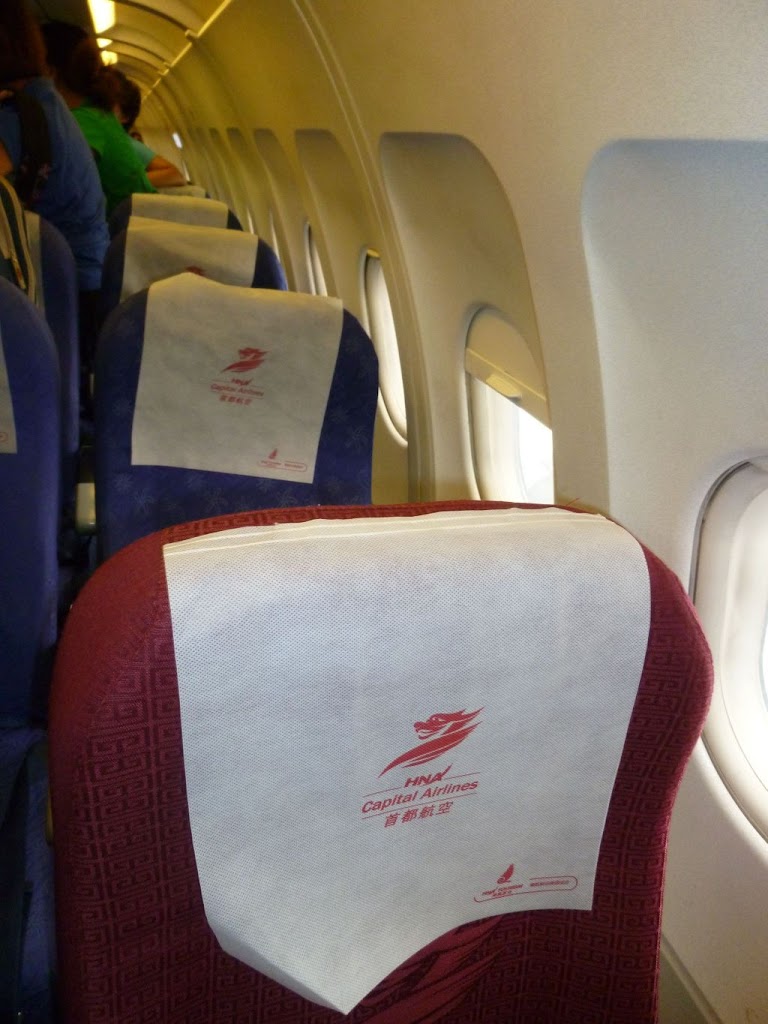 My suitcase is delivered a quarter of an hour after touchdown. I only need to negotiate the taxi ride to my hotel: when I leave the terminal, the foreign sucker fee starts at 285 RMB… and a driver eventually caves in at 90 RMB. 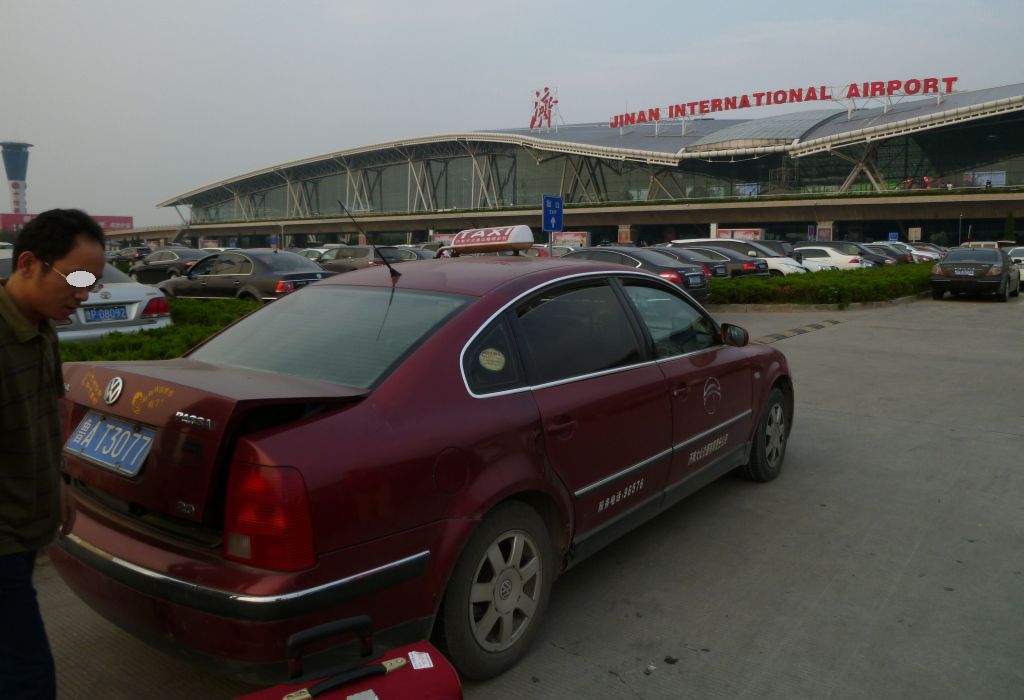 Jinan's airport is indeed international (or at least regional in local politically correct parlance), because I saw suitcases with BR luggage tags in my hotel's lobby: Taiwanese travelers who had obviously flown on the direct Taipei – Jinan flight operated by Eva Air. It feels like the end of my vacation…

I had booked a seat on Shandong Airlines' Flight SC1155 to Beijing, but you won't have a FR, only the picture of that aircraft (Jinan is the capital of Shandong province).

I chose to cancel my ticket (it only cost 5% of the fare) to take the high speed train, which was three times cheaper and much faster from city center to city center for a 400 km ride. I have good reasons to believe that Shandong Airlines' 737 is safer than this Chinese CRH380, but it has terrific looks. 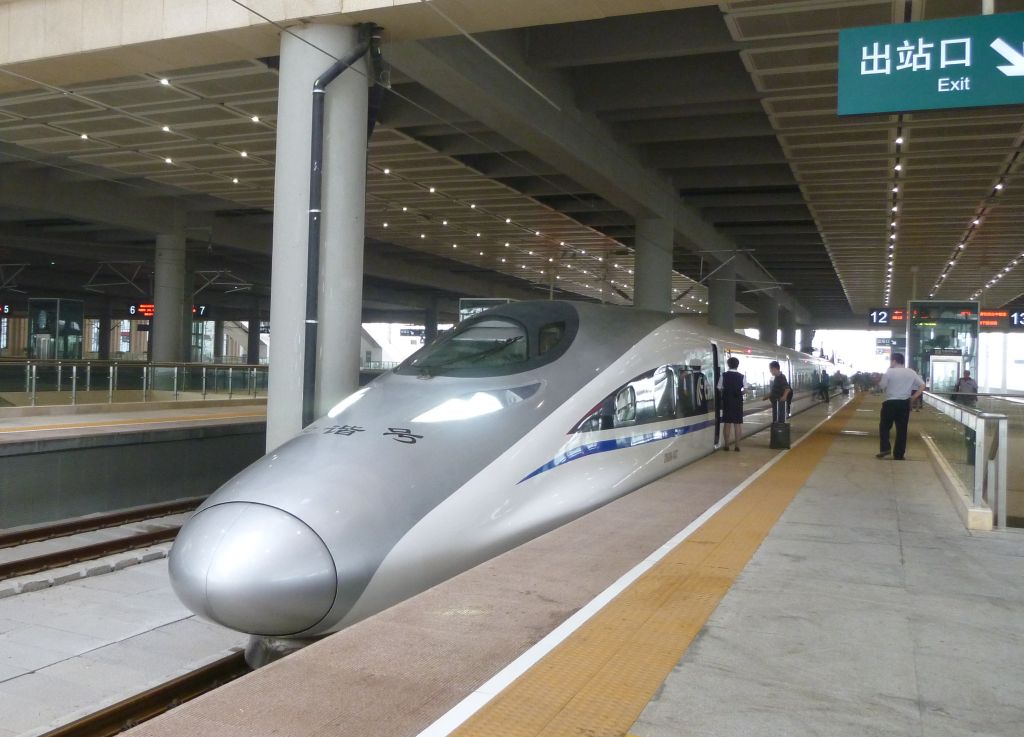 This is the end of the FR itself, now comes the tourist bonus.

Guilin is moderately interesting, and Jinan not at all, but both cities are start points for major sights. North of Guilin lie the famous Bridges of Wind and Rain, which were built without a single piece of metal, like Liping Bridge.

The most famous one is Chenyang Bridge

It was not the best season to see them, but the hike through them was nevertheless spectacular.

The Zhuang minority are famous for the long hair of their women, reaching all the way to their ankles for some.

Is it enough to protect them ? Probably not. The single child policy enforced in China results in selective abortions and female infant killings, resulting in a severely imbalanced sex ratio, especially in the rural areas. Hence the slogans that I saw during that hike

Taking care of baby girls is protecting the minority's future

Boys and girls are equally good. Girls can equally care for the elderly

Chinese drivers are usually reckless, and those of Shandong Province are no exception. There was a severe traffic jam on the expressway from Jinan to Qufu in the morning

And another one on the way back in the afternoon.

Qufu is the hometown of Confucius (Kongzi 孔子, in Mandarin, 551-479 BC), the philosopher who made a lasting print on the Chinese civilization.

You cannot realize the crowds of Chinese tourists visiting the former estates of the Kong family. There were no fewer than five tour guides, each with her own loudspeaker, in this courtyard alone. This is typical Chinese mass tourism.
See more

Beijing Capital Airlines is another regional Chinese airline which is on par with its much larger competitors. More friendly FAs, a lesser meal, but altogether a very good deal by Chinese standards.