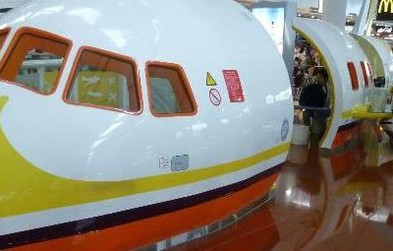 By marathon GOLD 4607
Published on 23rd November 2013
This is the final leg of this vacation in Mainland China :

This FR starts at the exit of the transit security check in HKG. The plane from PEK was on time, which meant that I had nearly two spare hours before boarding, and I started walking around for some plane spotting. As usual, the traffic was very active and diverse.

Kenya Airways B767; a United Airlines B747 in the background.

I admit I was initially intrigued by this 767. www.daodao.com (litterally, To where, to where ?, in Mandarin) is the Chinese name of Tripadvisor; you can recognize the logo. No, Tripadvisor does not have a plane: Mega Global Air, an airline based in the Maldives Island was cashing on some advertising space on its only aircraft.

Then a tour of the food court level upstairs, and a new variant of the kids' corner: 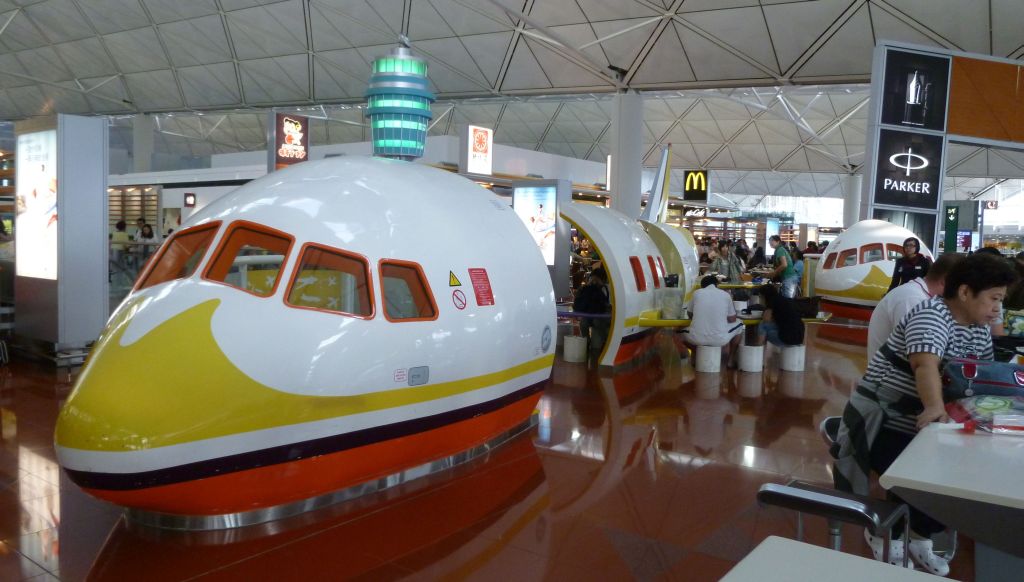 There are free internet access computers here and there in the terminal. Free access has a double meaning for me, because this is the first time in three weeks that I can surf anywhere on the web, including Flight Report which is blocked in Mainland China.

There are also unusual ATMs which can deliver cash in HKD of course, but also in USD and RMB. The Chinese yuan (RMB) is not convertible, which is theoretically not negotiable abroad, but Hong-Kong is not quite abroad (Actually, it is also possible to buy and sell RMBs in banks in Taipei). 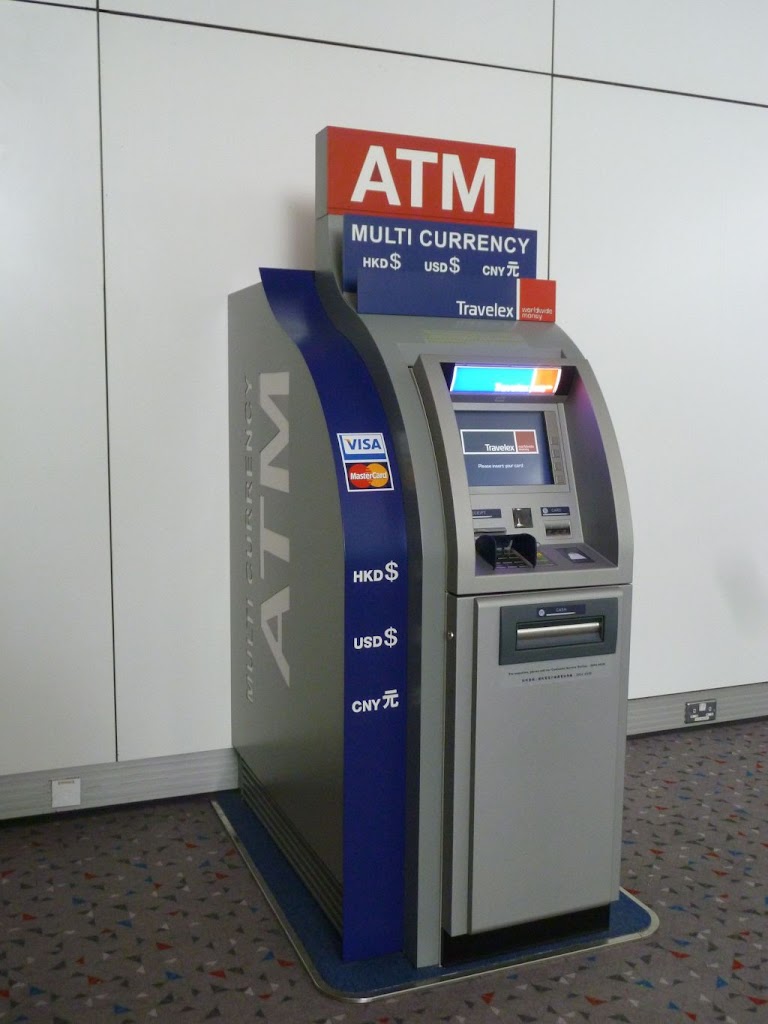 This prayer room would be nowhere to be found in an airport in Mainland China. 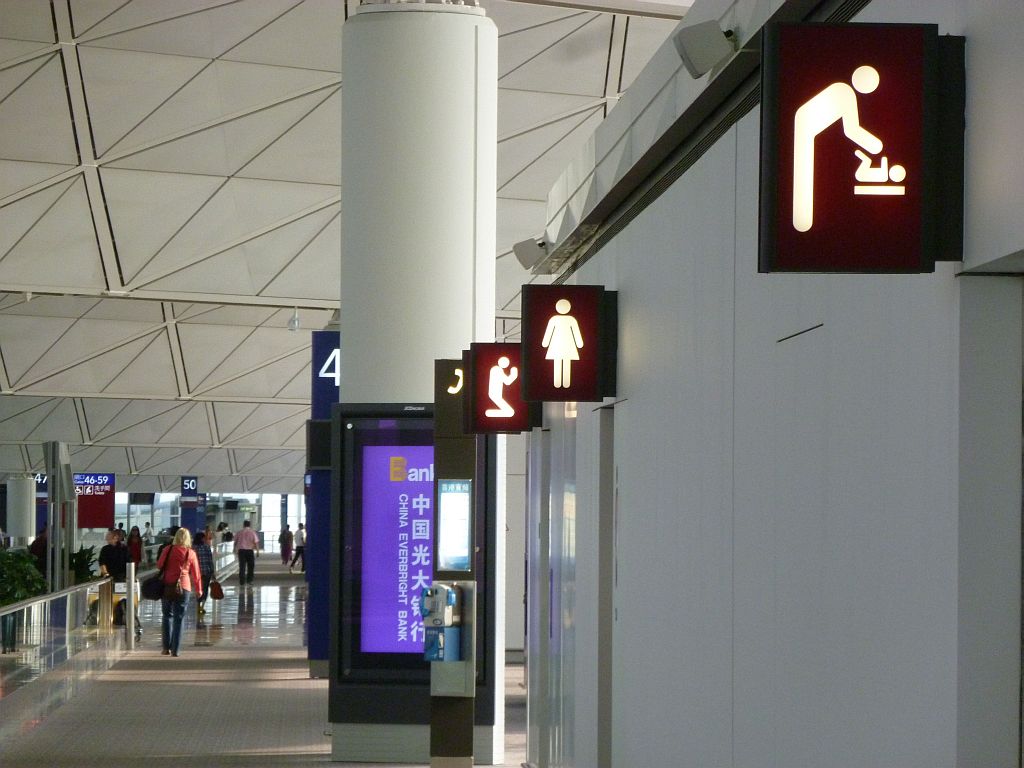 I come closer to my boarding gate; the power plugs are much better laid out than in PEK, but lo behold if you forgot to take a type G adapter! This is only standard available in HKG, whereas in China, the power plugs are always compatible Type A, B, E+F and I, even if the cheapest hotel. 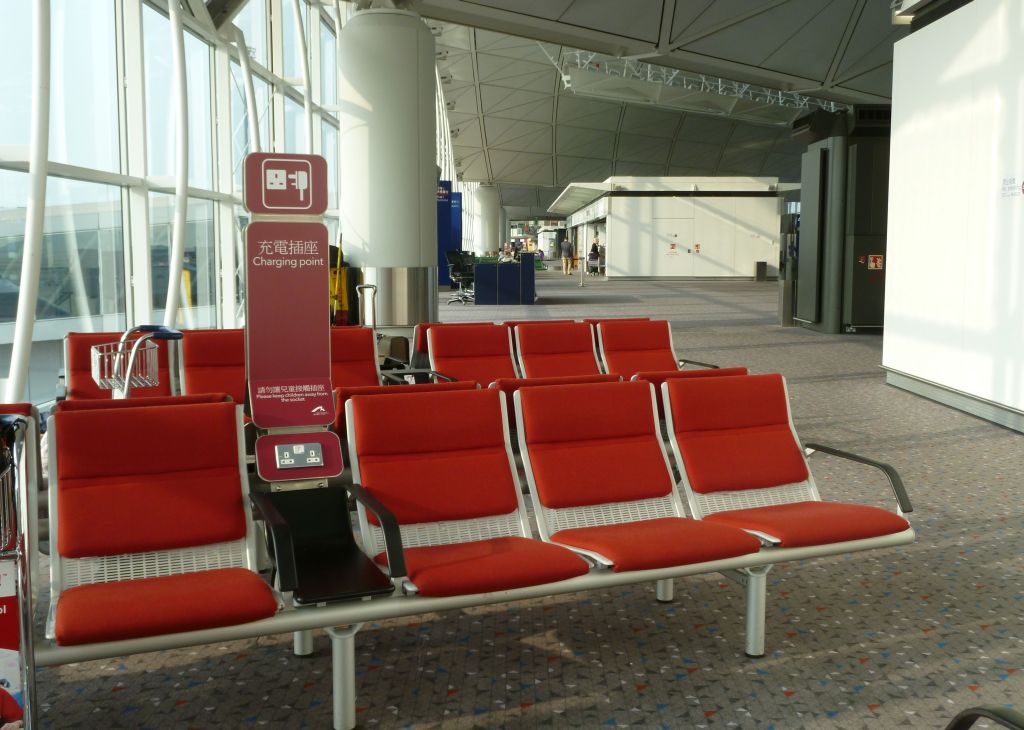 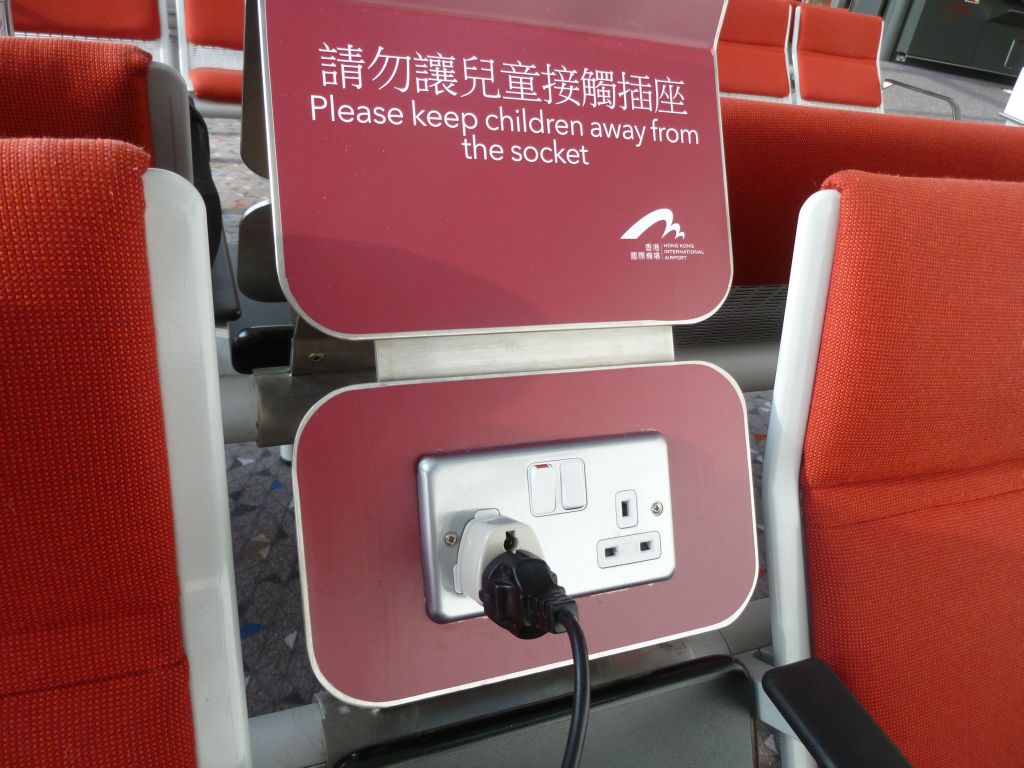 CX may have noted my ignorance when it comes to identify planes, and tried to convince me that I was going to fly on a B777.

This was really getting too far, and I recognized a B747. (A jumbo jet for a short haul flight – typical

A 747 for an 800 km flight? Sunday evening is a rush hour on the HKG-TPE route. Taiwan's China Airlines also operates a 747 and a smaller A330. I also see in the distance a big Eva Air aircraft.

Boarding is by zone, announced in Mandarin only. Contrary to Mainland and Taiwanese airports, you must show an ID with the BP.

When checking in in PEK, I ahd asked for a window seat on the left (the side for a good view on Hong Kong at take-off if the weather is right). Seat 44A, with a card telling me that this was an emergency exit seat. I should have paid more attention to it, but I did not have as much experience as I now have.

Many travelers prefer these seats for stretching their legs, but mine are size S, and I have little use for that. 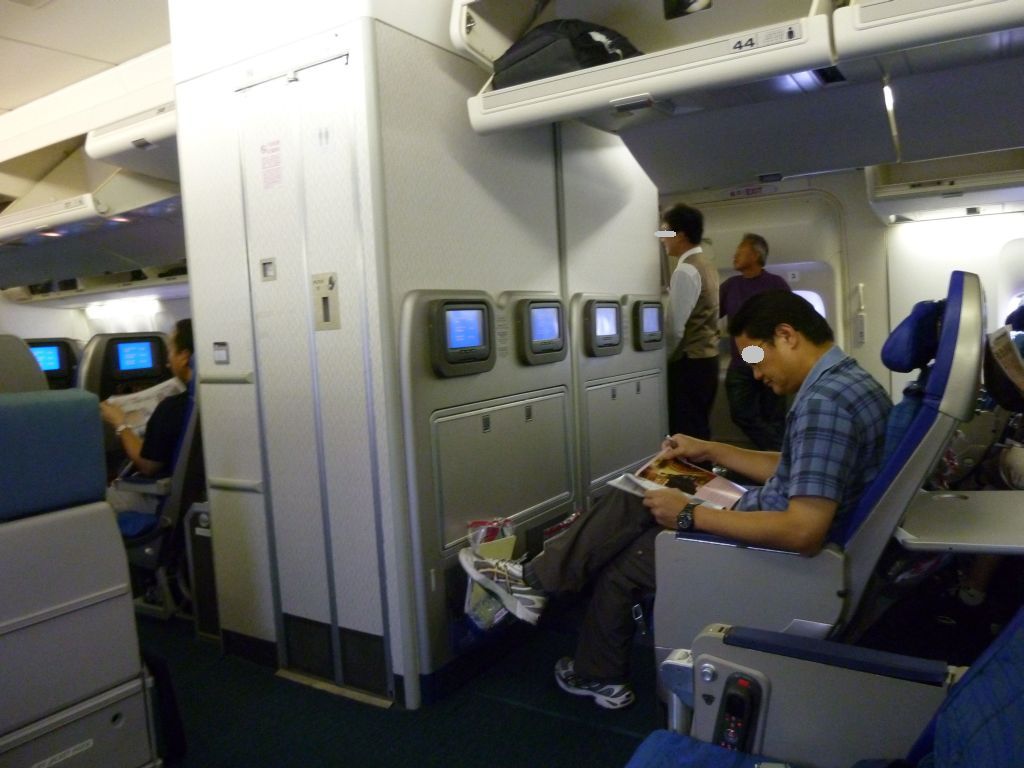 On the other hand, I do not enjoy the absence of storage under the preceding seat which makes it compulsory to store all your hand luggage for take-off and landing, and being in full view of the FAs sitting on the jumpseats facing you, making picture taking during the more interesting phases of the flight problematic.

Only when reaching my seat did I discover that this window seat… had no window. 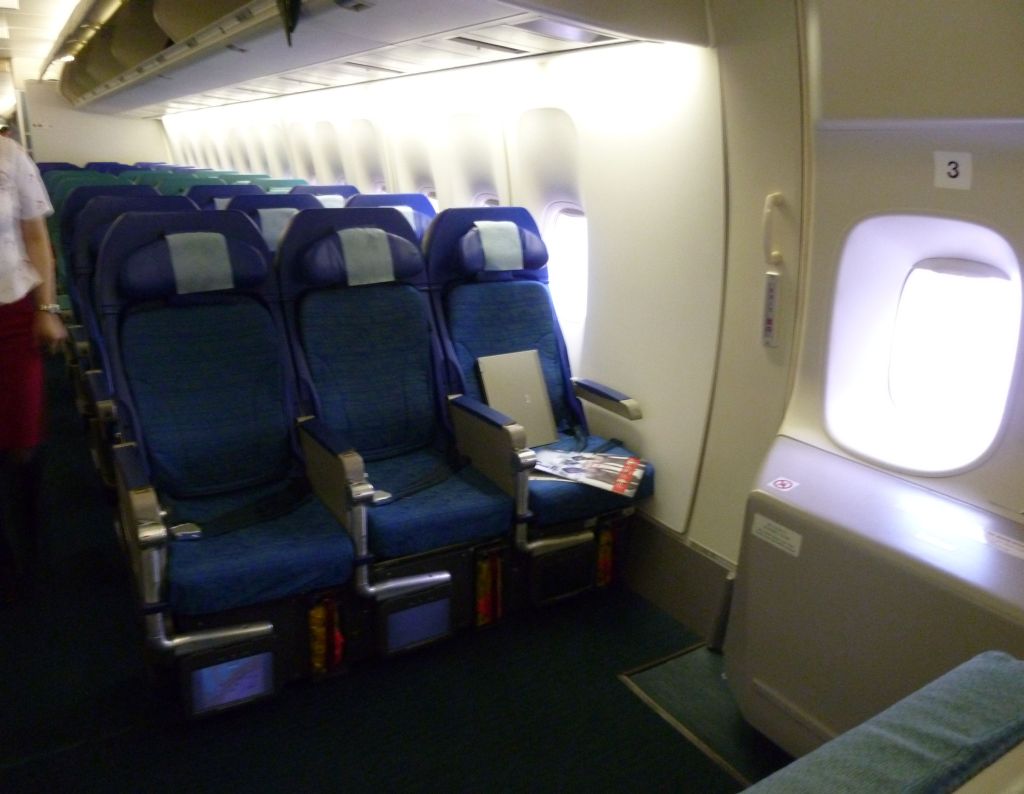 The immediate consequence is that I'll have all the aforesaid inconvenient, and no advantage. Even more so that if one of the FAs sitting in front of me is pretty and smiling, her colleague is neither (which is quite unusual in this part of the world).

Furthermore, only later did I discover that that there was a small fold-away IFE in the armrest, and I looked only the IFE 2.5 meters away overhead. 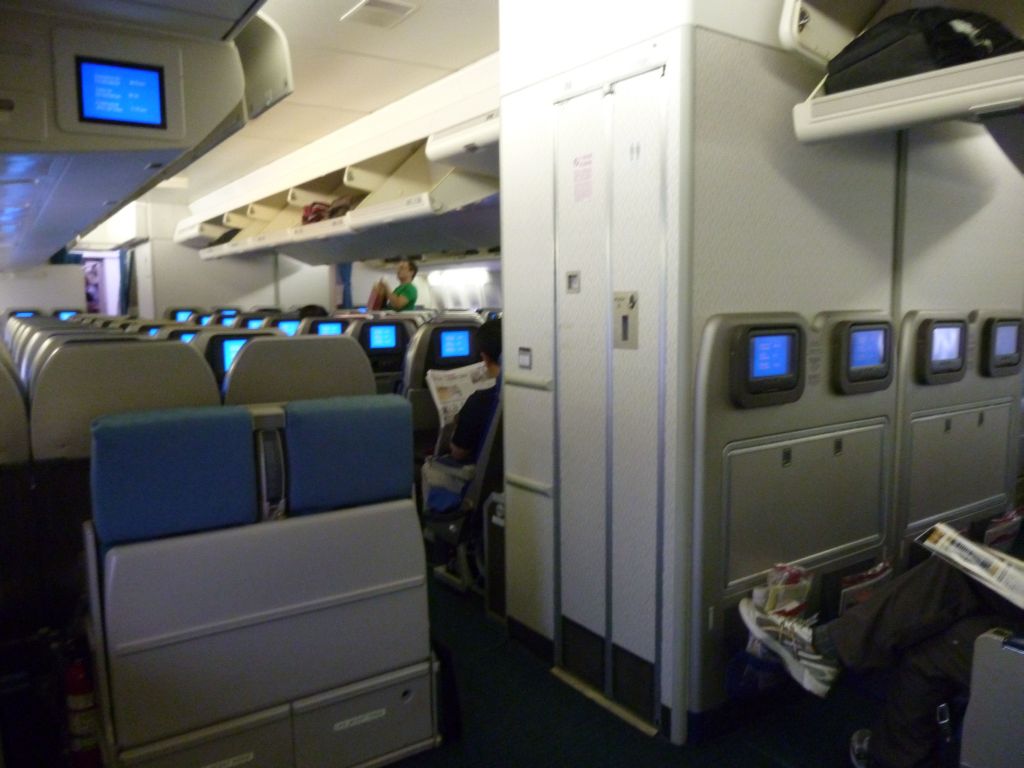 Let's face it: I am furious against the check-in agent in Beijing. I mention that to one of the FAs, who understands my disappointment, and offers to help me change seat informing me that the plane is full – which means zero chance that there is a spare seat.

Two views of the economy cabin: 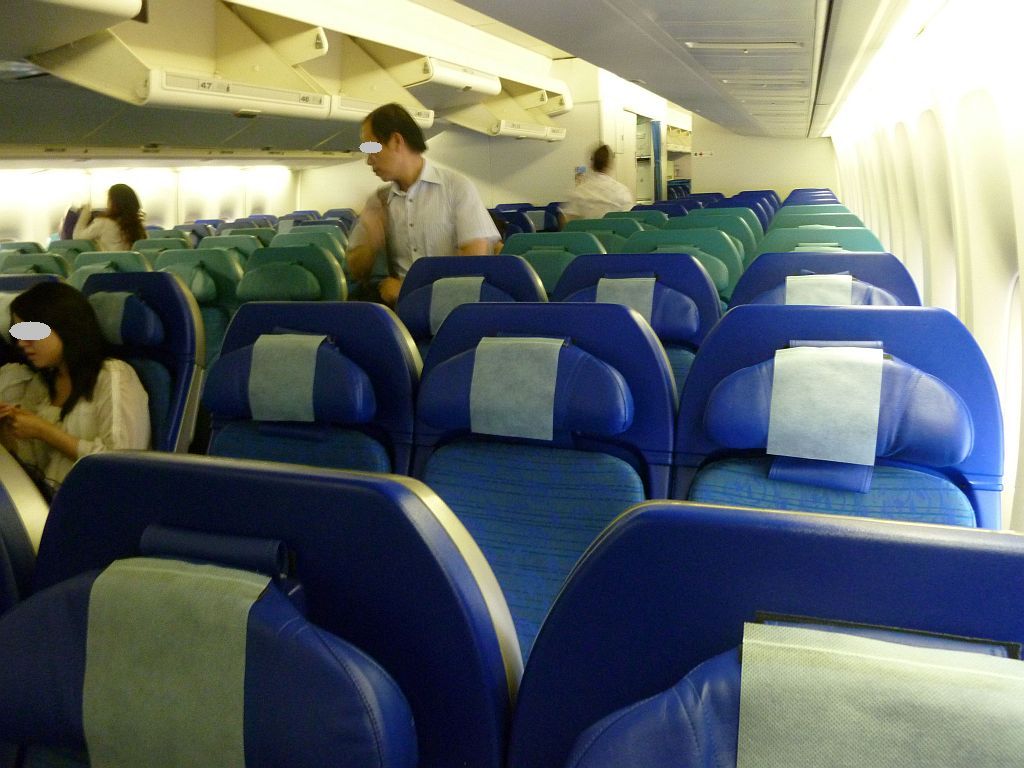 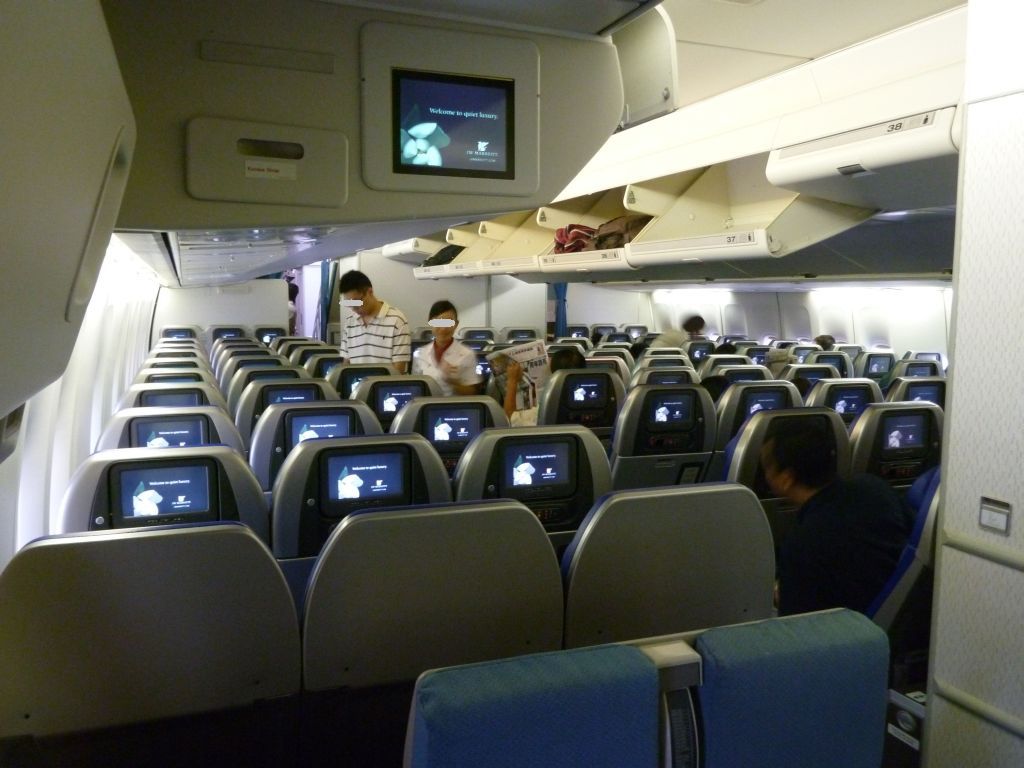 Another source of poor comfort: it is very hot in the plane, as hot as outside, i.e. approximately 30°C. During the take off, one the FAs sitting on the jumpseats on the other side kept using a newspaper as a fan, and I wouldn't blame her for that – I would have done the same.

What happened a dozen rows ahead of me? I did not find out, but several FAs appeared to relay to plug a leak (hot or cold air?) with towels and tape. It really looked like jury-rigging. 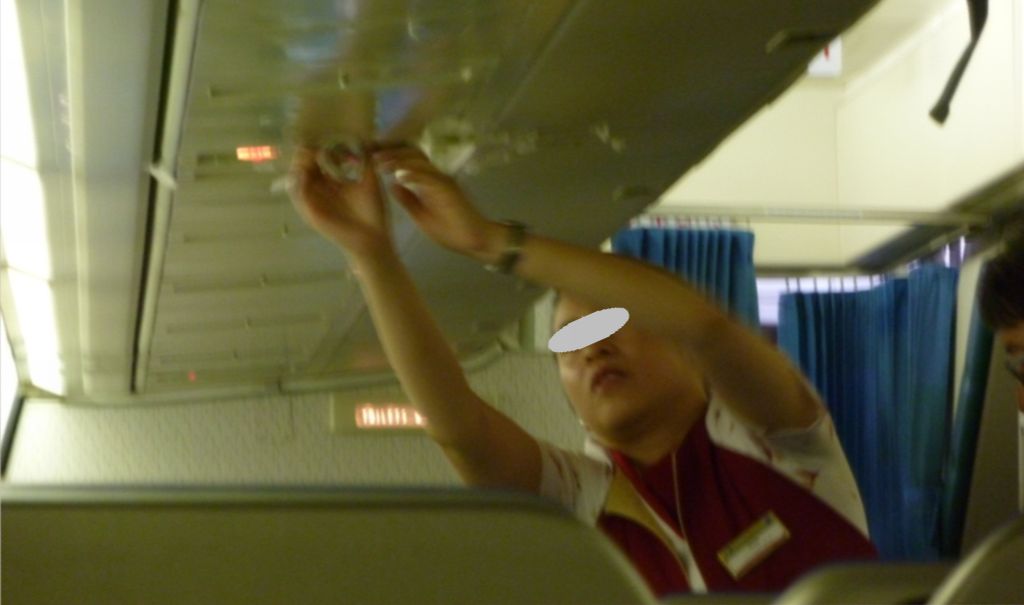 Taxiing towards the runway (I used the window behind me, very uncomfortably so).

As soon as this is possible, the FAs distribute the dinner which is quite disappointing, because this pork wrap is extremely hot and the crust is hard and burnt. A decent coffee ensues. 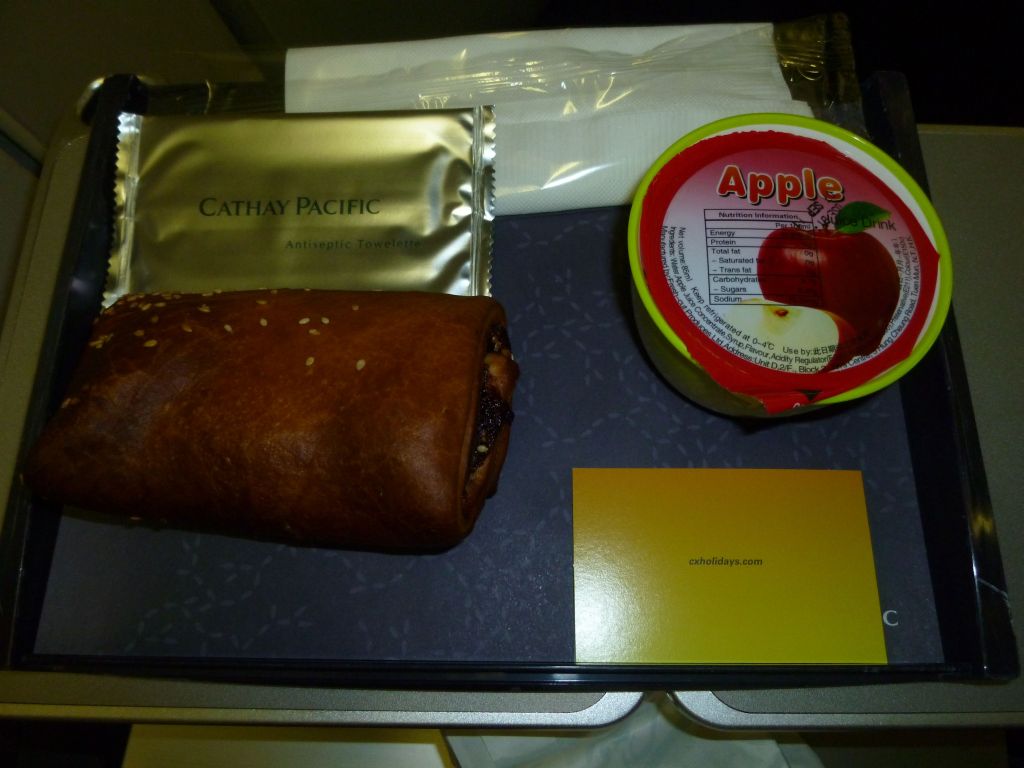 The captain makes the usual speech; no so usual, since typhoon Nanmadol is nearing the south of Taiwan, and he reassures the passengers in that it should not perturbate the flight. It was getting time to come back from vacation!

Landing on time. I had a brief view of the old herringbone layout of the J cabin which I hated when I flew earlier in a CX A340.

At the luggage delivery, a ground staff (I masked the face with black) optimizes the position of the suitcases which come in at a brisk pace. Many pieces of luggage are actually of hand luggage size, but he is nevertheless remarkably efficient. 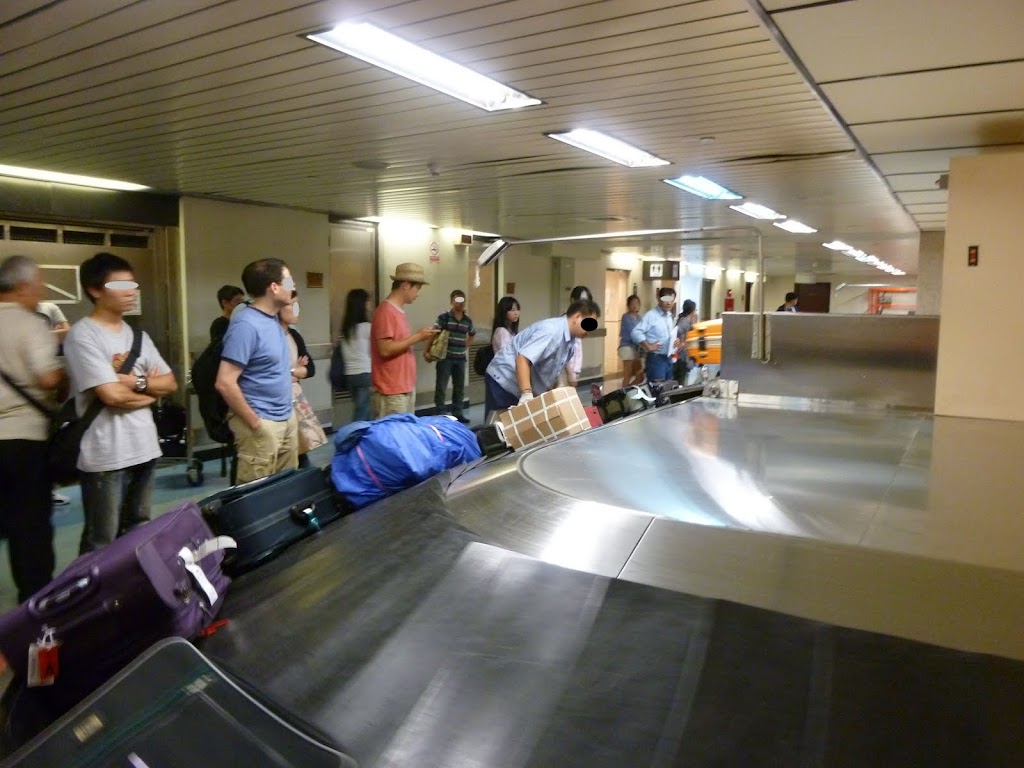 I let you guess the timing had it been a fully loaded 747 landing in CDG or JFK (remember that I was flying economy, with no priority other than my resident card, but standard immigration is always very fast in TPE).
See more

My comfort rating of Flight CX278 was severe. That of Flight CX402 is even more severe, because of the inconvenient of the emergency exit seat. On the other hand, the meal was disappointing, but a lot better than what you get on a similar distance in Europe.