#40 out of 113 Airlines A minimum of 10 flight-reports within the past two years is required to appear in the rankings. 132 reviews

By marathon SILVER 3326
Published on 8th December 2013
This Flight report is really an oldie, and actually the first I posted on Flight-Report which had just been created. The date of the flight is after the launch of the website, but I had not prepared for it, and this FR as well the two ensuing ones are really archive FRs and there are not as detailed as the later ones. I added a tourist bonus to the original French version.

This was a triangular business trip from TPE to the other China :

This is the name in Chinese of the flights across the Straits of Taiwan: only in 2009 have direct flights between China (excluding Hong Kong and Macau) and Taiwan have been authorized. At the time of this flight, the number of flights were limited, because Mainland China citizens were only allowed to board them if they had bought very expensive all-inclusive tours. The first flight from Taipei to Zhengzhou happened on March 31st, 2009: only politics could make it impossible during sixty years to have a flight between two cities of several million inhabitants each, speaking the same language, only two hours flying time from each other.

How many readers of the FR could place Zhengzhou (CGO) without cheating? I was the only foreigner on board this flight, anyway.

I arrived a little late at the airport: there was a long line for check in of all China Southern flights. No indication above the counters. The fast lane was only for business class and Pearl Club Elite members, but not for FB Elite, even though CZ is part of Skyteam. There had been a last call (in Mandarin only, with a Taiwanese accent) that I did not catch… I reached the counter ten minutes too late. I insisted, I had no luggage to check, put my FB platinum card prominently on my passport,… and they relented. Wow! This was really the last minute, because even though immigration and security checks were as usual very efficient (and nothing rang at the metal detection), they closed the door of the aircraft behind me.

In these circumstances, walking at a brisk pace in the terminal, I only paused to take a couple pictures. In China, a 738 does not necessarily have winglets, and this one did not. 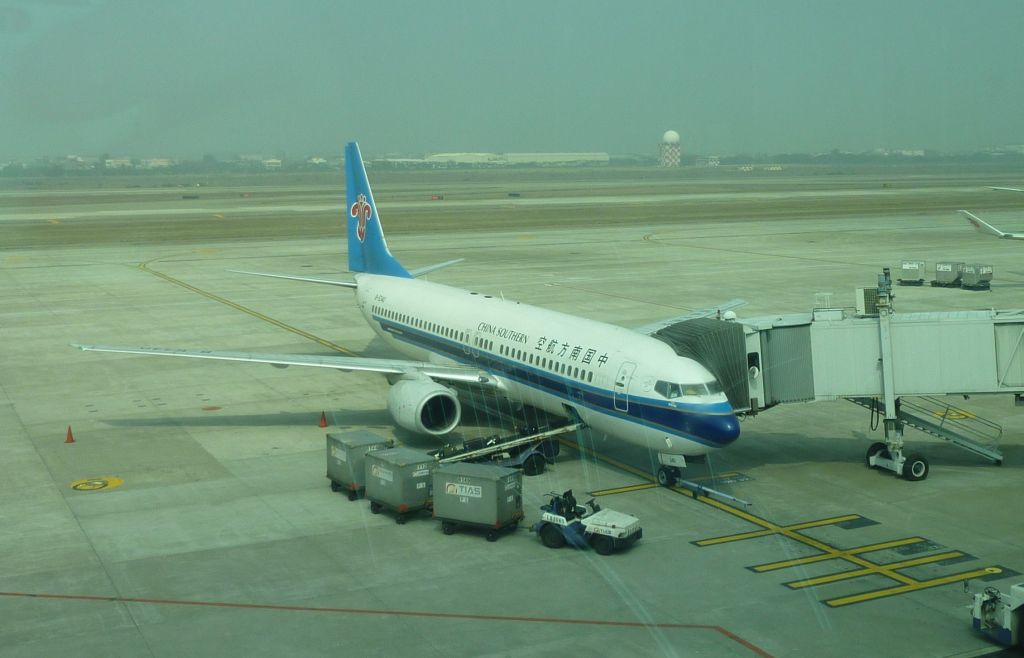 For aircraft registration number geeks, this one was B-5340.

I did not measure it, but the seat pitch was quite generous (32?). The meal was identical to that of Chinese domestic flights: nothing extraordinary, but in economy, you always have the choice between two hot meals, always a variation between beef, chicken and fish, with rice or noodles. Rice is usually a better choice, to my taste. In a similar manner, we had a quarter of an hour of stretching and relaxation exercises on the IFEs. In China, many passengers do them, but here, most passengers are Taiwanese, and do not care for them. At the arrival in Zhengzhou, it was snowing and the cloud ceiling was very low, so much so that I wondered in retrospect how the plane did land. Anyway, it did land, as opposed to Henan Flight 8387, which crashed 1,500 meters short of the runway in Yichan on 24 August the year before, destroying a quarter of that Zhengzhou based airline.

It is a short walk; a small group of presumably Chinese gathers before the immigration, leaving all the counters available for me.

ZhengZhou, an international airport? Better say it quickly. The list of that Friday's flights on the airport's website (in Chinese only, which is not very international) spoke for itself: one flight from KUL (via PVG), and one from BKK (via CAN), one from HKG (in China, but with a quasi-international status), two from TPE (that China would like to consider as Chinese). For the first two flights, immigration is at PVG and CAN, respectively. In other words, Zhengzhou's immigration officers are not overworked. The policeman examines this unusual French passport, bearing on two successive pages two valid resident's visas in Taiwan and Mainland China, but gave it back to me, with a smile and an unusual stamp of entry in China in Zhengzhou. Next comes the tourist bonus. The Holiday Inn Express does not seem a grand name

There seemed to be some affluent customers here. There is something to say about bad weather when you love fast cars and do not want the police to know too much about your car's registration number.

The wrong thing about a business meeting is that the venue is often where the action will be, i.e. where there is nothing yet. Note that the snow did not melt : it evaporated in the dry winter weather.

It was just after the Chinese New Year, and the decorations were still there. Miles of them…

Apart from the excellent Henan province museum, there is not much to say about Zhengzhou. The remains of the rammed earth Shang Dynasty wall was a cold attraction.

A view from the top, on a driving school

(note the ? (study) ideogram on the right of the number plate)

A cock fight at the foot of the wall

Did you notice the construction work in the background ?

Good chance are that Zhengzhou now has a Shang Dynasty wall in mint condition.

What if you want to give a gift to your beloved ?

Sure you can give her flowers, but they won't last long when it is that cold

Stuffed toys are a safer choice than flowers !

The flight itself was very much like any Chinese domestic flight. What was unusual was the route… and the price of the ticket: Taiwan-China flights are very expensive, with no justification other than the fact that the offer is much less than the demand, for purely political reasons.