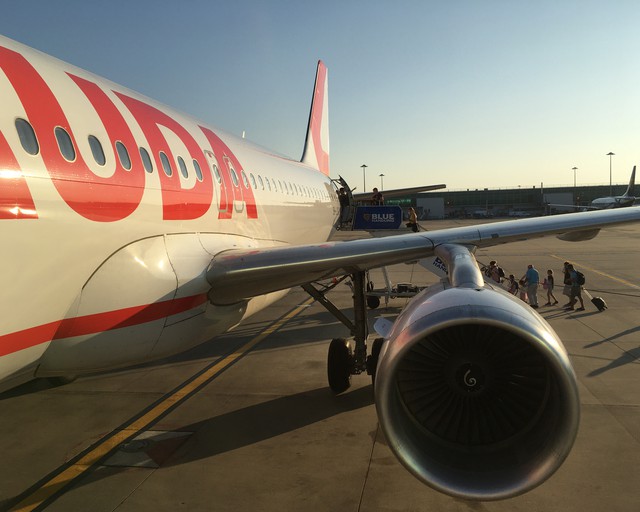 The story of this airline begins in 2003. Niki Lauda, a famous and retired F1 Grand Prix racing legend set the airline up in Austria as a low cost holiday airline. Lauda founded this airline following Austrian Airlines acquisition of his first airline Lauda Air. This new airline named NIKI would also partly succeed the recently defunct AeroLloyd Austria operations. The airline flew Airbus A320/A321 for the most part of its existence initially wearing a striking silver livery with "NIKI" written in bright red encased by a circle. 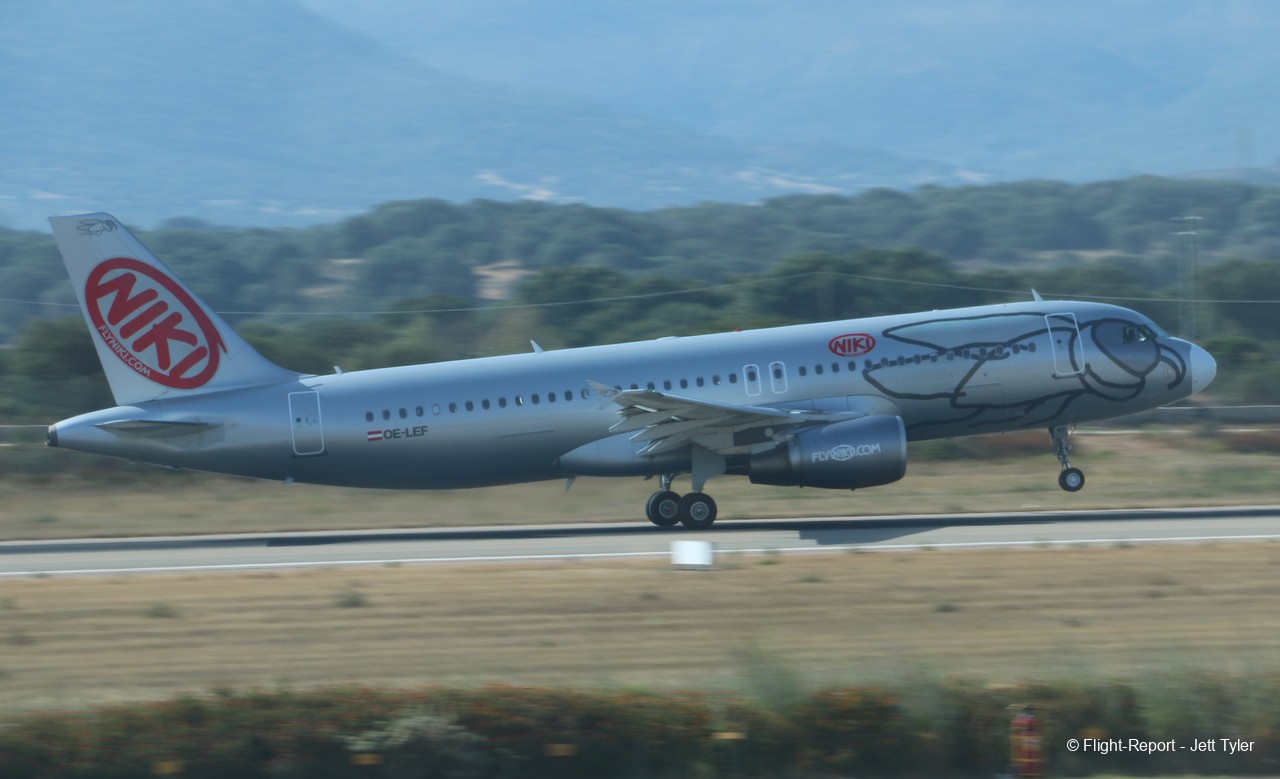 In 2017 the long troubled Air Berlin went into insolvency and ceased operations in October 2017. Niki Lauda stepped up and bought the assets of NIKI and would merge the assets into his current airline business Amira Air and brought a new airline into the world- LAUDAMOTION!

This would prove to become Niki Lauda's final airline venture as he passed away on May 20th 2019. 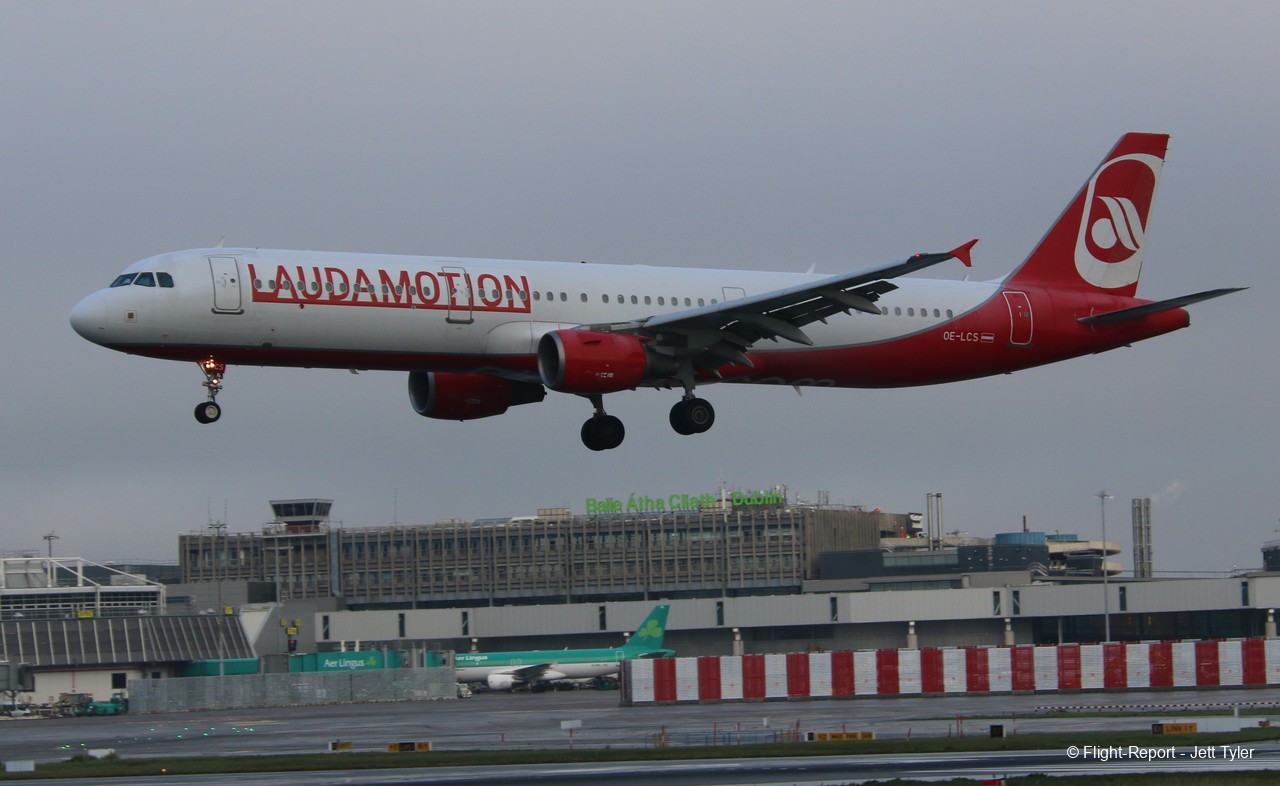 LaudaMotion titles adorned the Airbus A320/A321 fleet acquired to set up the new airline- still flying in a basic Air Berlin livery for the time being. However in the spring of 2018 Ryanair acquired a 24% stake in the new Austrian airline- adding it to their growing portfolio of European airline spin offs (including Buzz! and Ryanair UK). Eventually Ryanair would acquire 100% of the airline in January 2019. The Airbus A321 would leave the fleet and the airline would settle on the Airbus A320- a stark contrast to the other Ryanair Group airlines who all operate the Boeing 737-800 or Boeing 737-8200 (737-8MAX). A new livery was also introduced to wipe off the historic ties to the defunct Air Berlin. The new livery and brand would see the "Motion" dropped from the airline name keeping it simply as LAUDA. 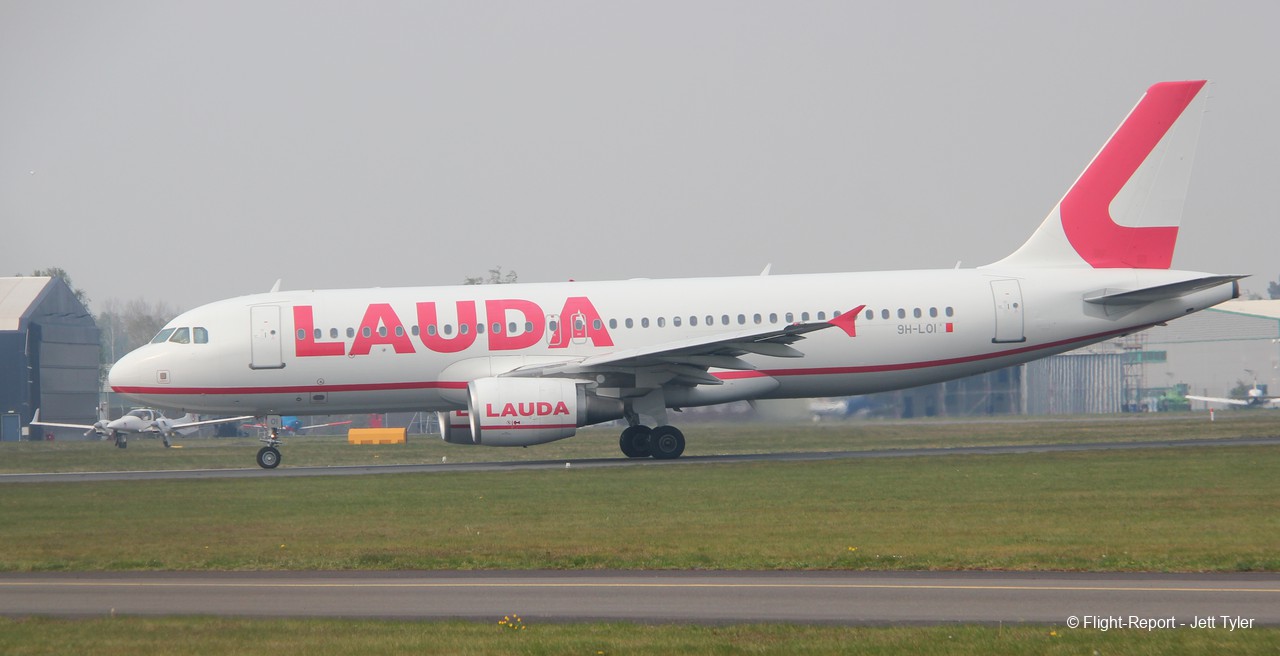 Since 2019- the LAUDA fleet has worn this livery on their Airbus A320 fleet, all planes now wear a Maltese registration.

However during 2019 and 2020 the airline would enter issues as Ryanair and various unions in Austria/Germany, where the airline set up bases on behalf of its parent company, would enter some strong disputes. This resulted in LAUDA being closed as an Austrian airline and being re-established in July 2020 as a Maltese based company- LAUDA Europe.

The airline serves Ryanair flights mainly out of Vienna and some leased flights across the Ryanair network. Despite some suggestions of Boeing 737-MAX aircraft being introduced to phase out the Airbus A320s- in 2022 it was confirmed that the A320 fleet leases would be extended until 2028. 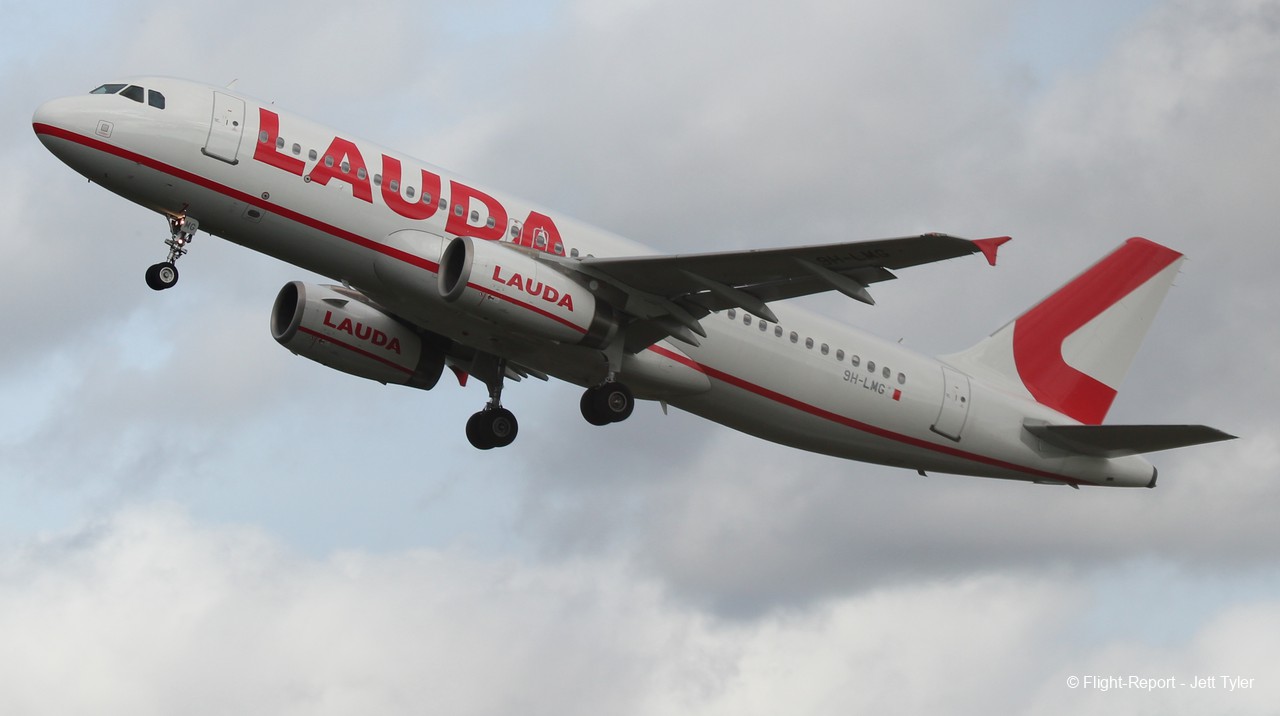 Me and my travel gang arrived into London STN early, parking a car in the so-called "Red Zone" just a short walk from the Terminal building. We arrived a good three hours early due to the on-going staffing problems Airports over Europe are facing. We had added priority security to our itinerary, which saved us a lot of hassle from not having to que in the main security lane which was understandably heaving! 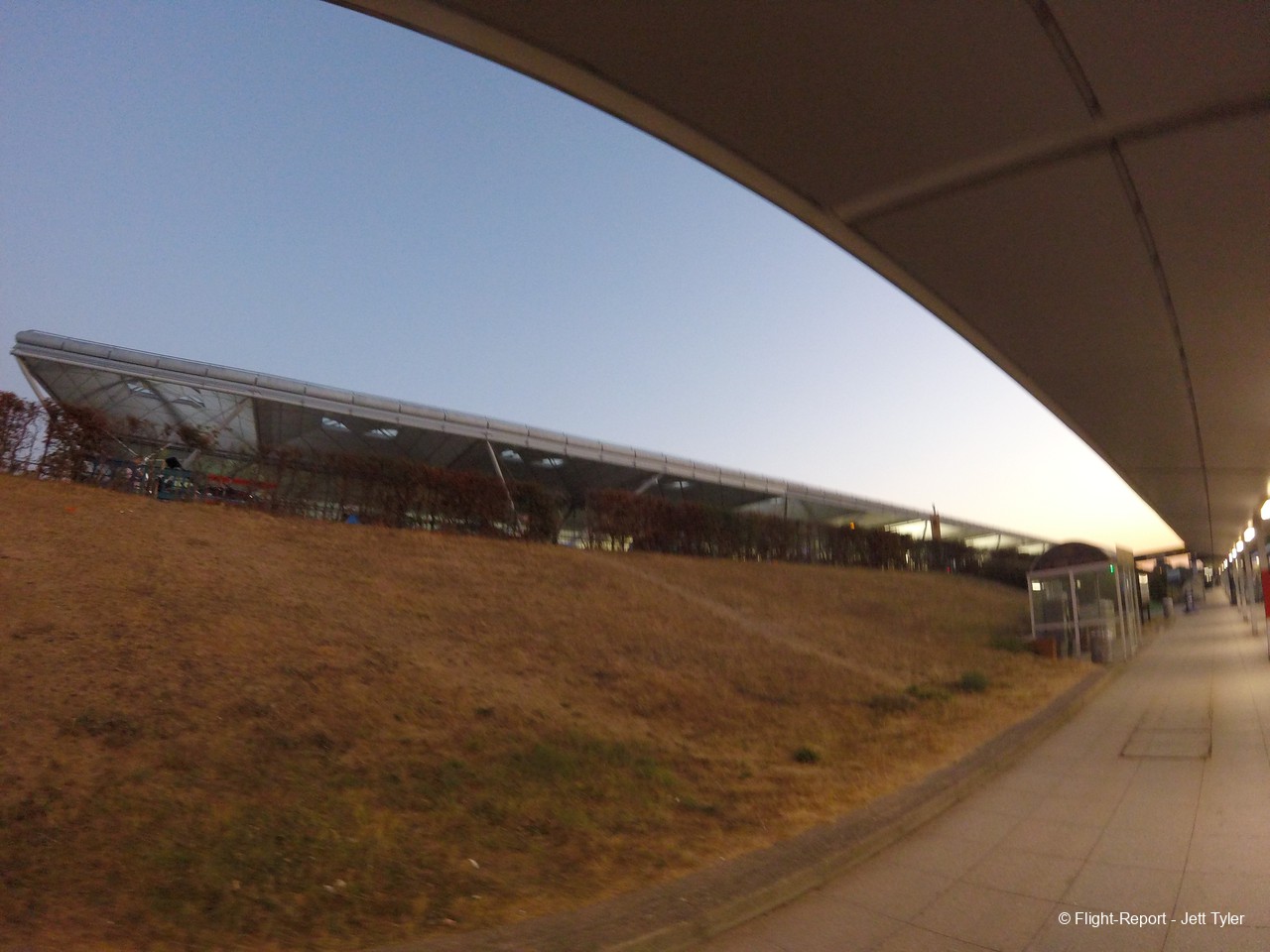 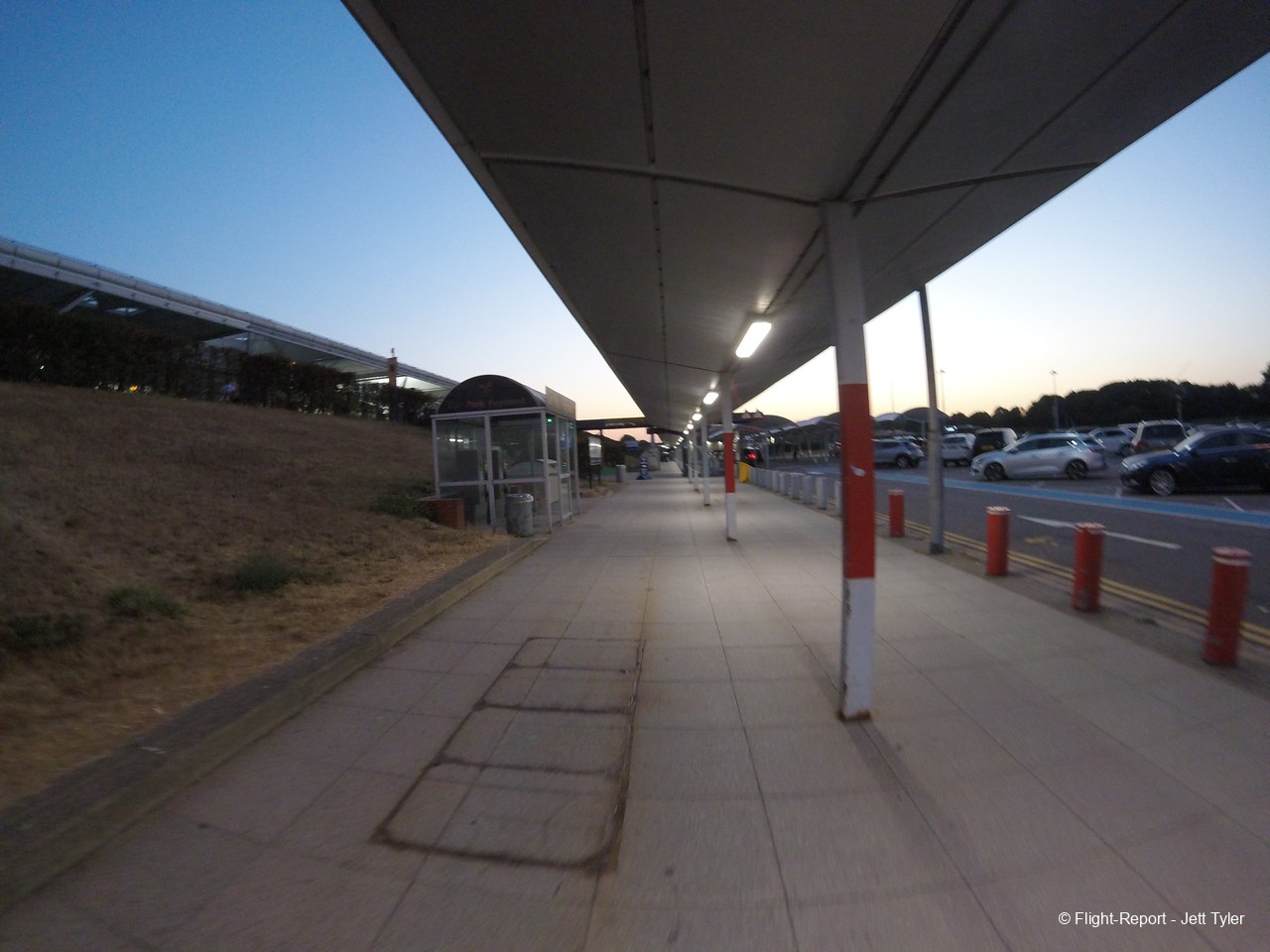 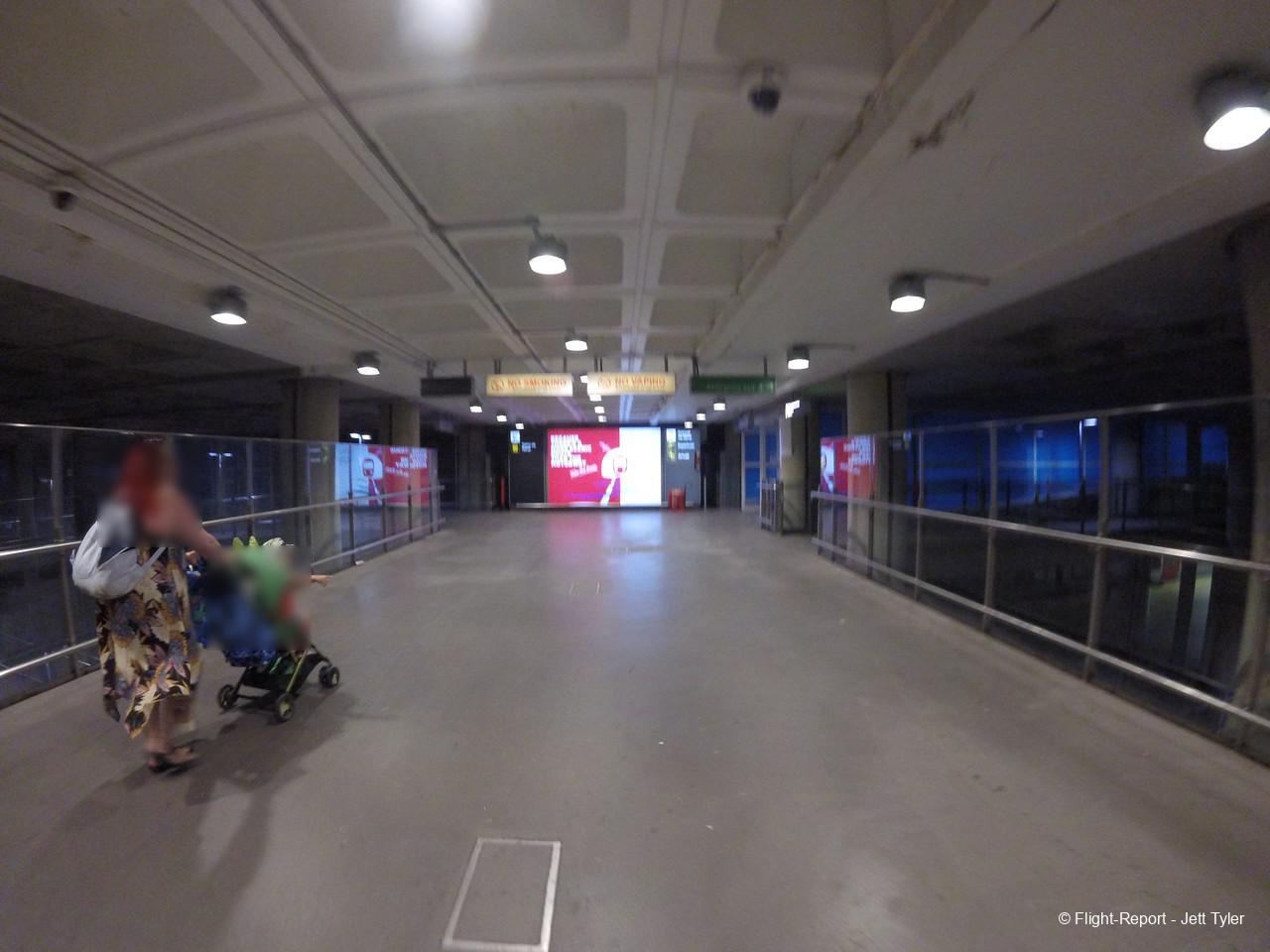 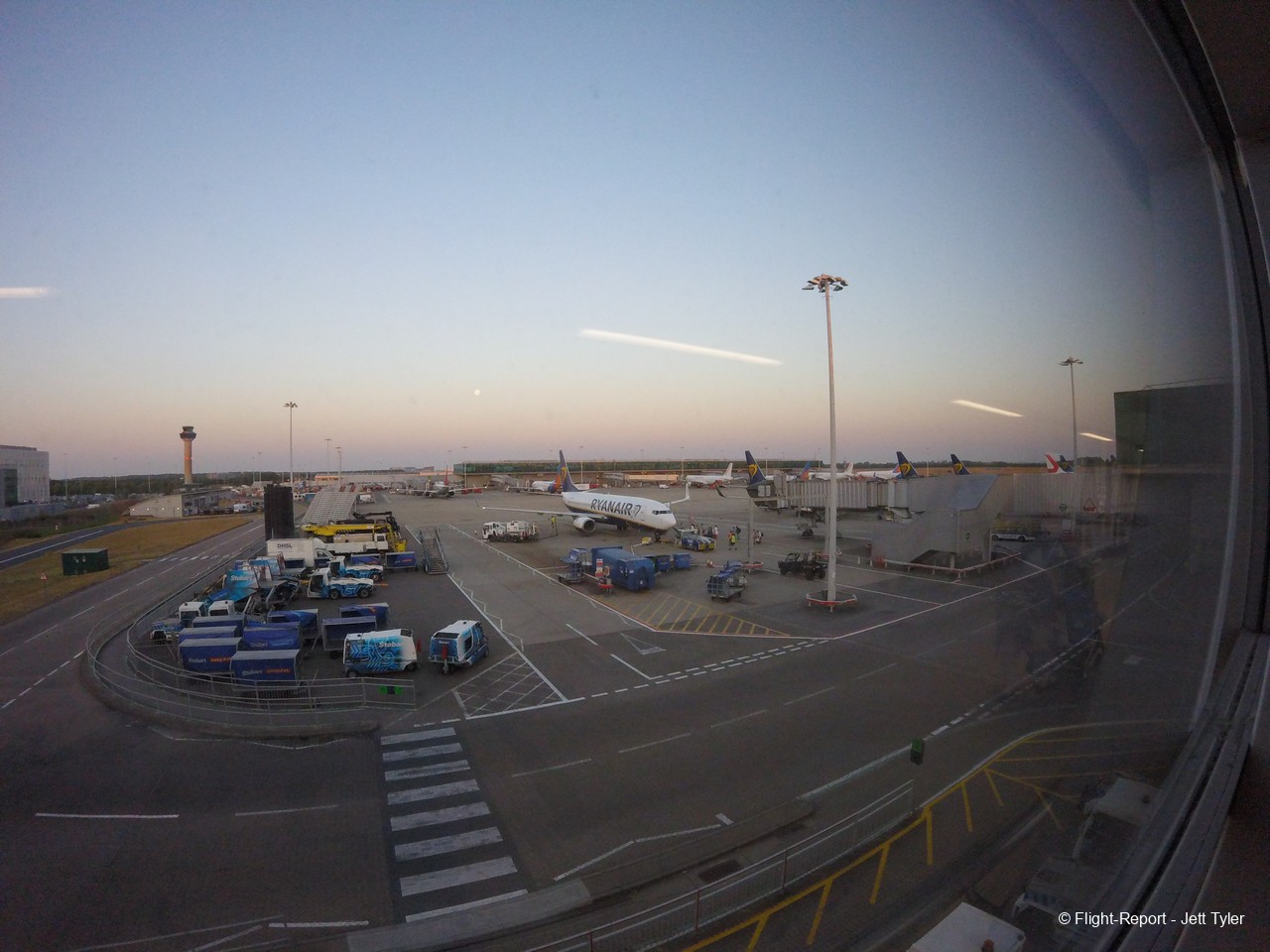 Getting airside was easy enough, however after the route march through STN Duty Free and into the "crucible" section- All the eateries were jammed packed! So we went off to our advertised gate, which was made easier given all four LAUDA Airbus A320 stationed at London STN were parked in this particular area. Our gate was boarding a Boeing 737 for Bucharest- but ours was noted as the next flight at the Gate.

Our Airbus A320-ceo for this flight would turn out to be 9H-LOR, a 15 year old aircraft who had flown for the Chinese Shenzhen Airlines before coming over to LaudaMotion and Lauda Europe in 2019. 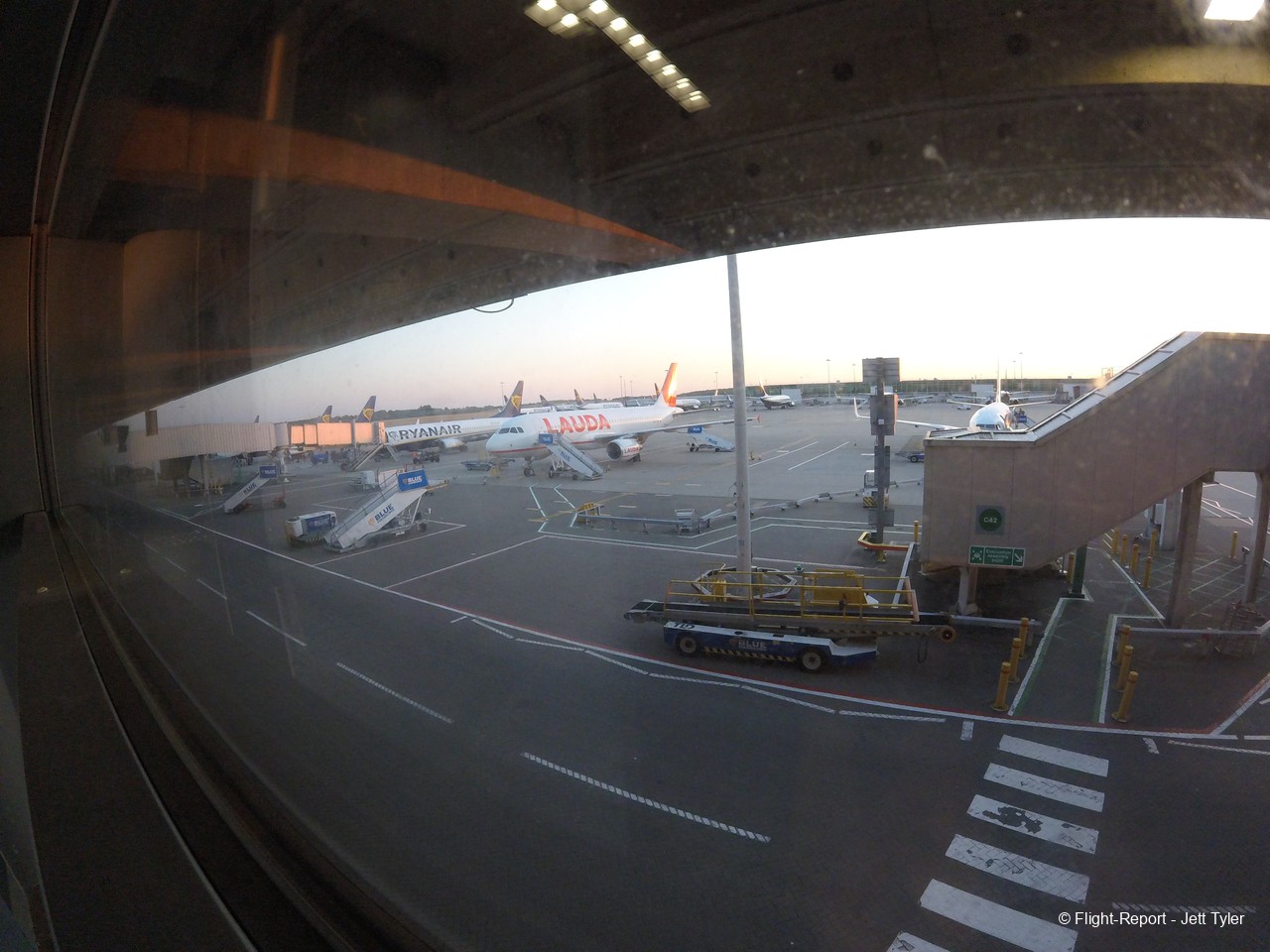 When boarding eventually began, the typical open board that is to be seen at London STN was to be enjoyed at its fullest! It also allowed a good chance to grab some boarding shots going into a Lauda A320 for a change over the usual Boeing 737 of Ryanair! 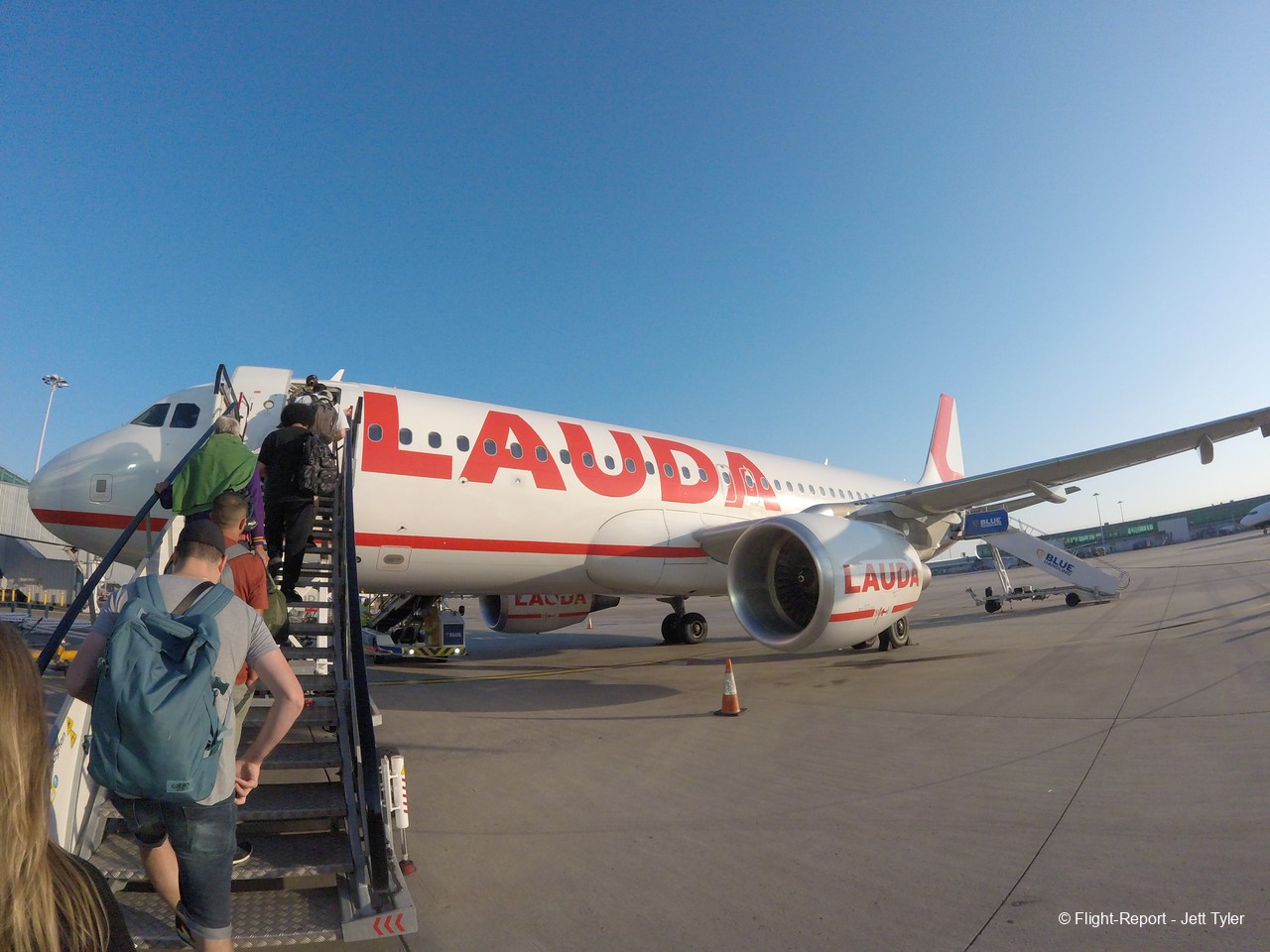 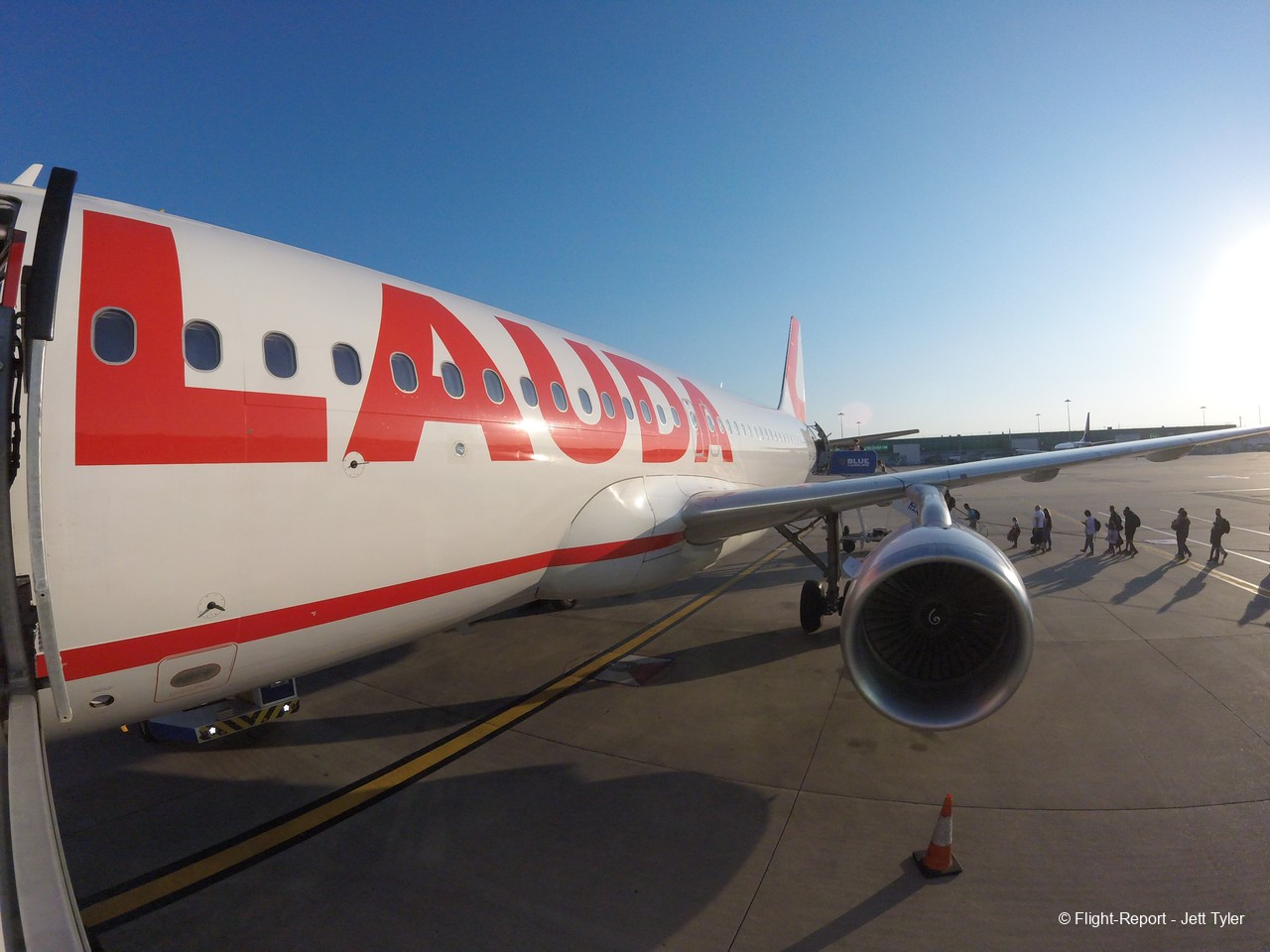 Boarding was the usual story, but I was very happy with the seat of choice which was right by the engine, Seat 10F.

It was a very busy flight with a good 170+ seats filled out of the possible 186 an Airbus A320 can fit in. I found the seats to be quite comfortable, slightly better than the seats offered by the Ryanair 737s. These seats are an older design (likely from its previous Chinese owner) and are in a neutral grey colour. 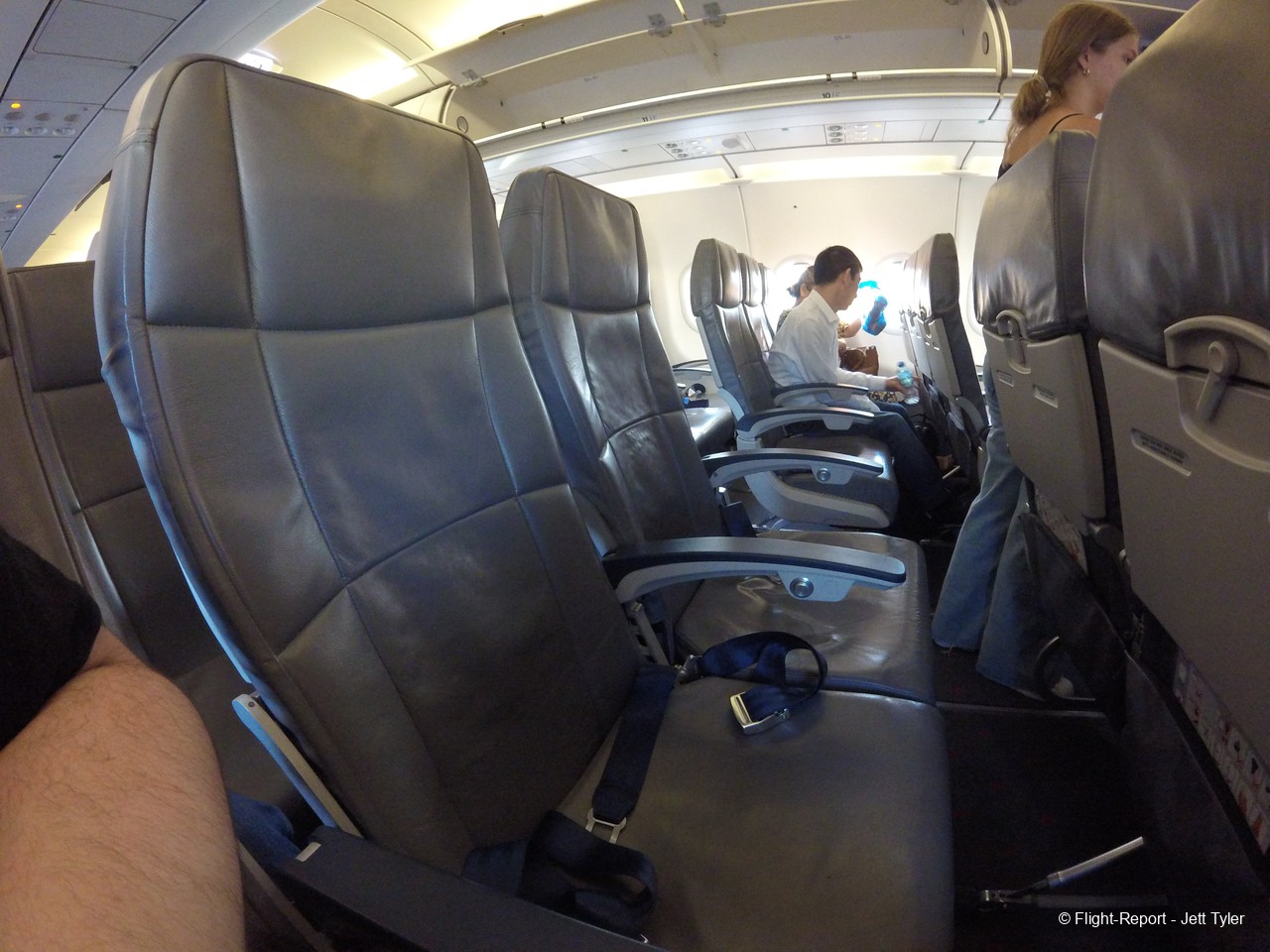 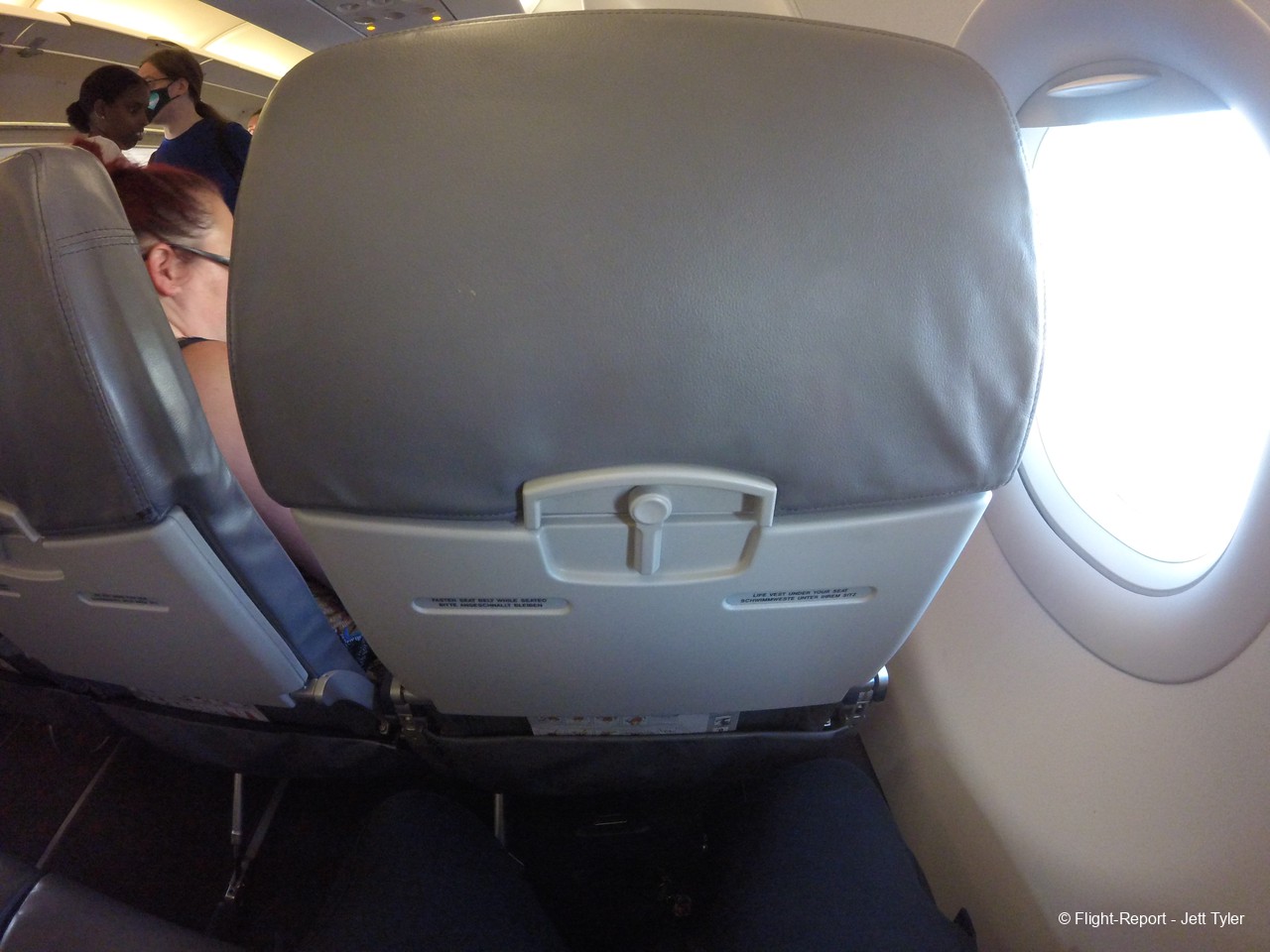 We pushed back and had a prolong taxi to the other side of London Stansted for a sunny departure from Runway 04, passing by the VIP Area and Ryanair maintenance hanger. One thing I enjoy about summer time departures is the 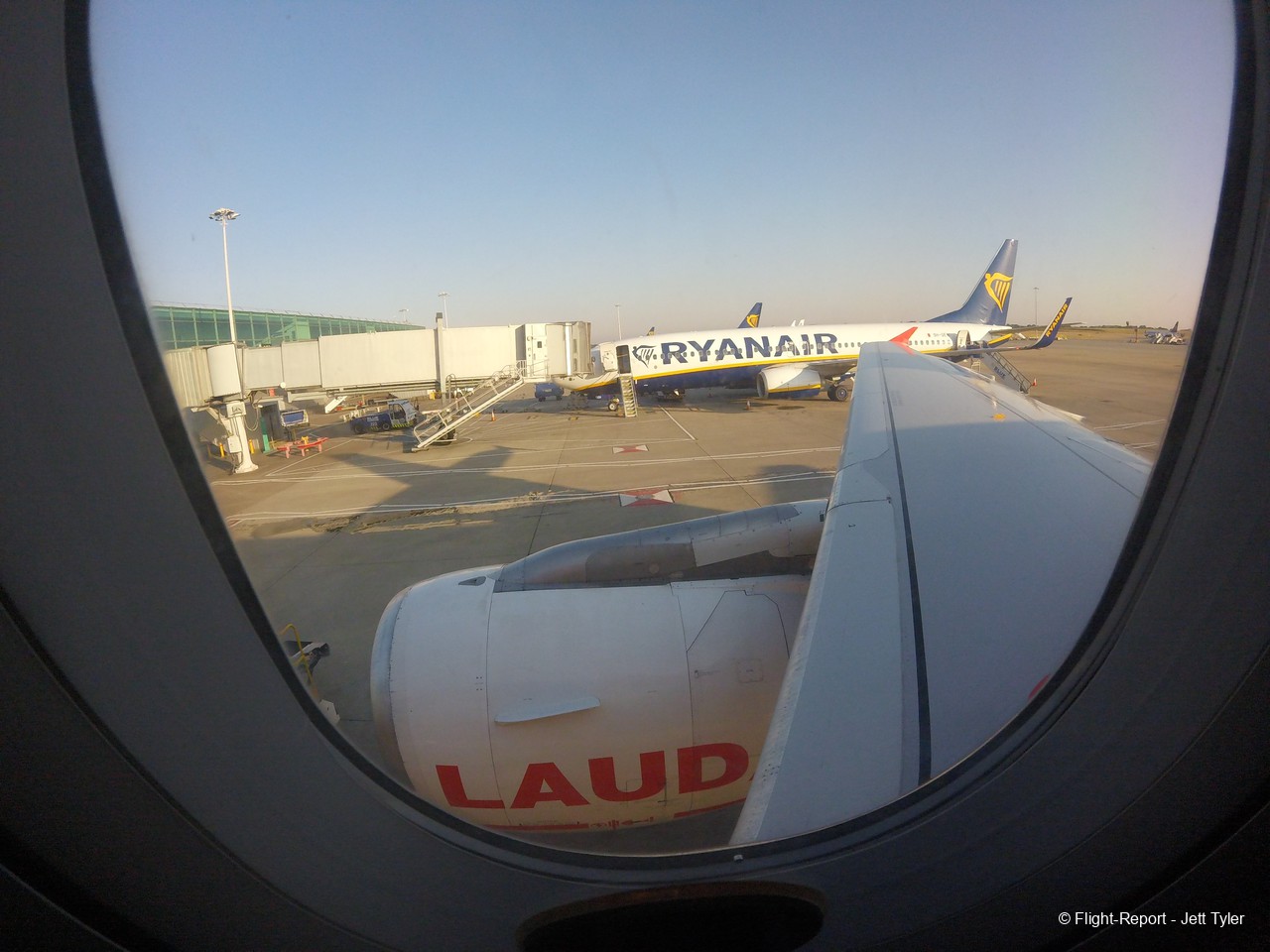 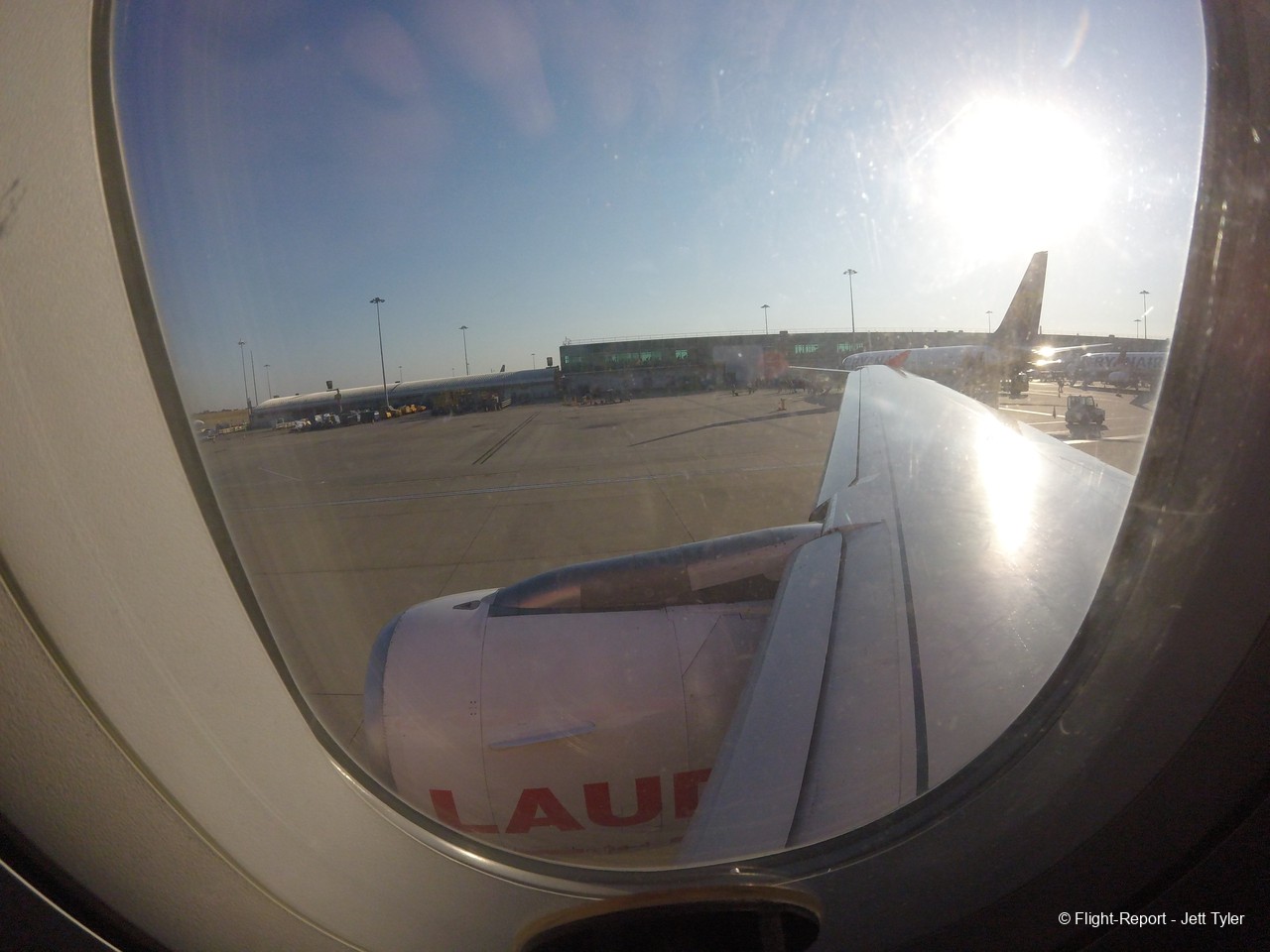 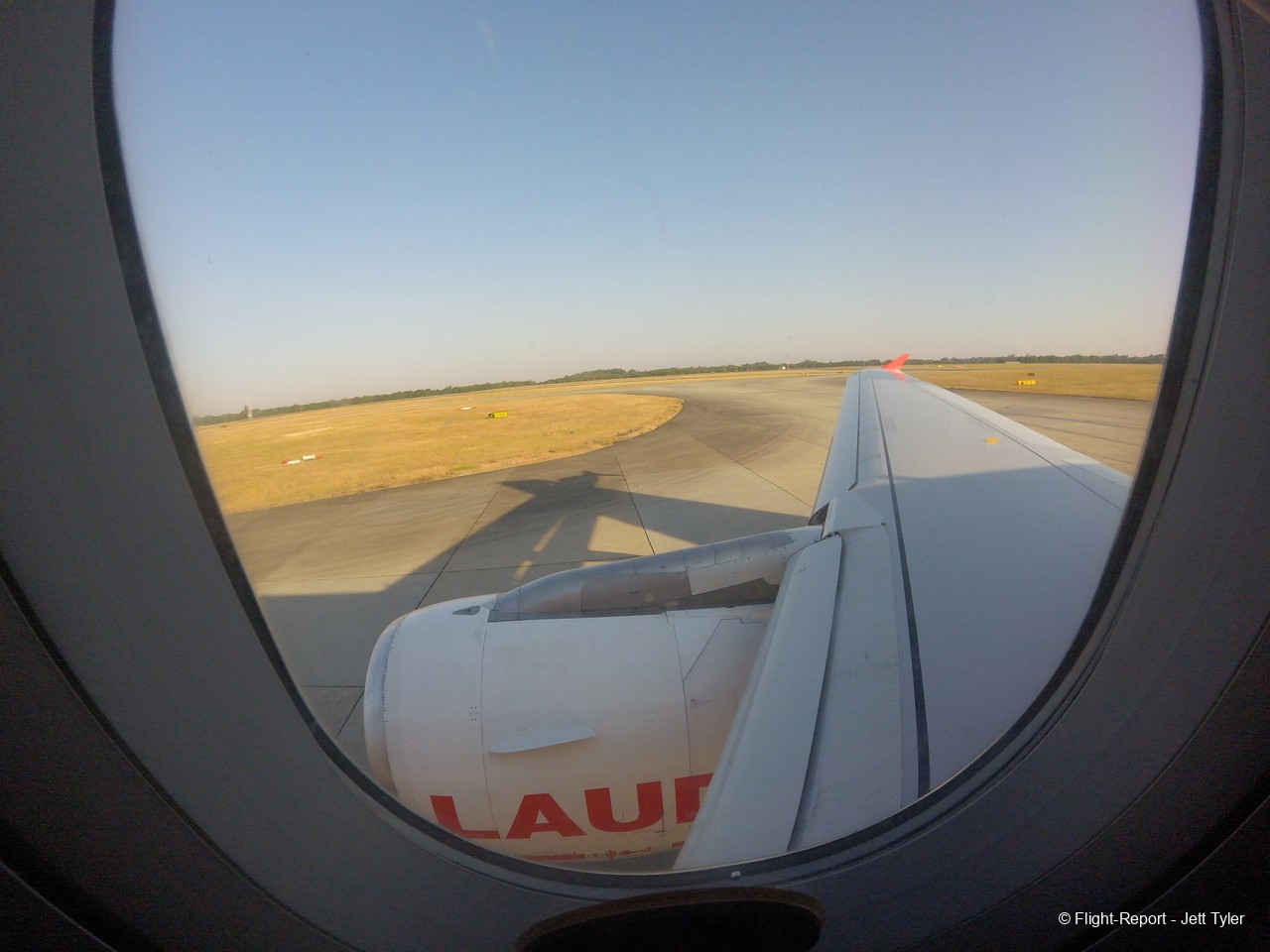 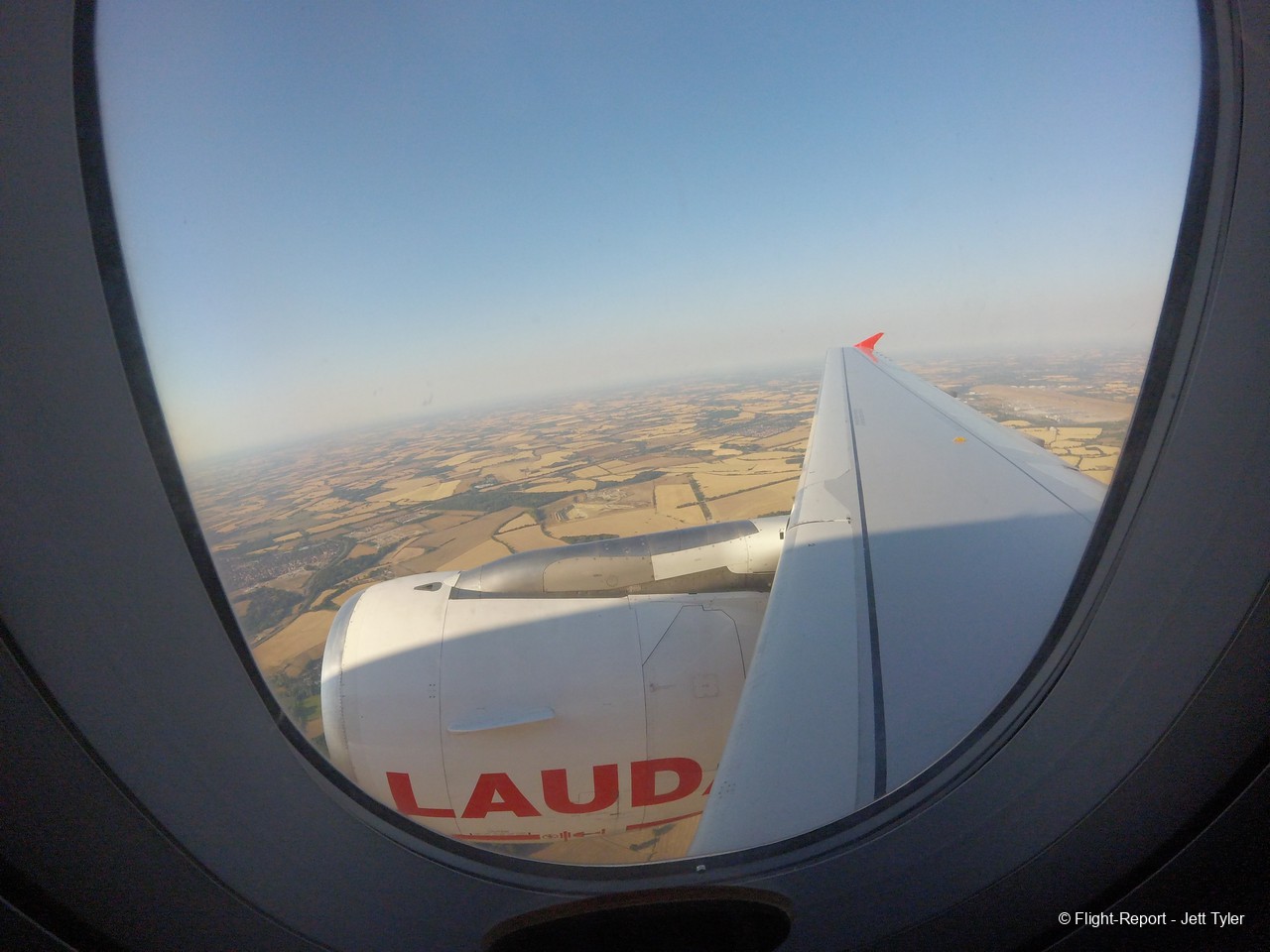 We took off and after making a round about turn- we headed off towards Denmark. Our route would take us over the Netherlands and across the coastline of Northern Germany as we made our way to the Danish mainland. 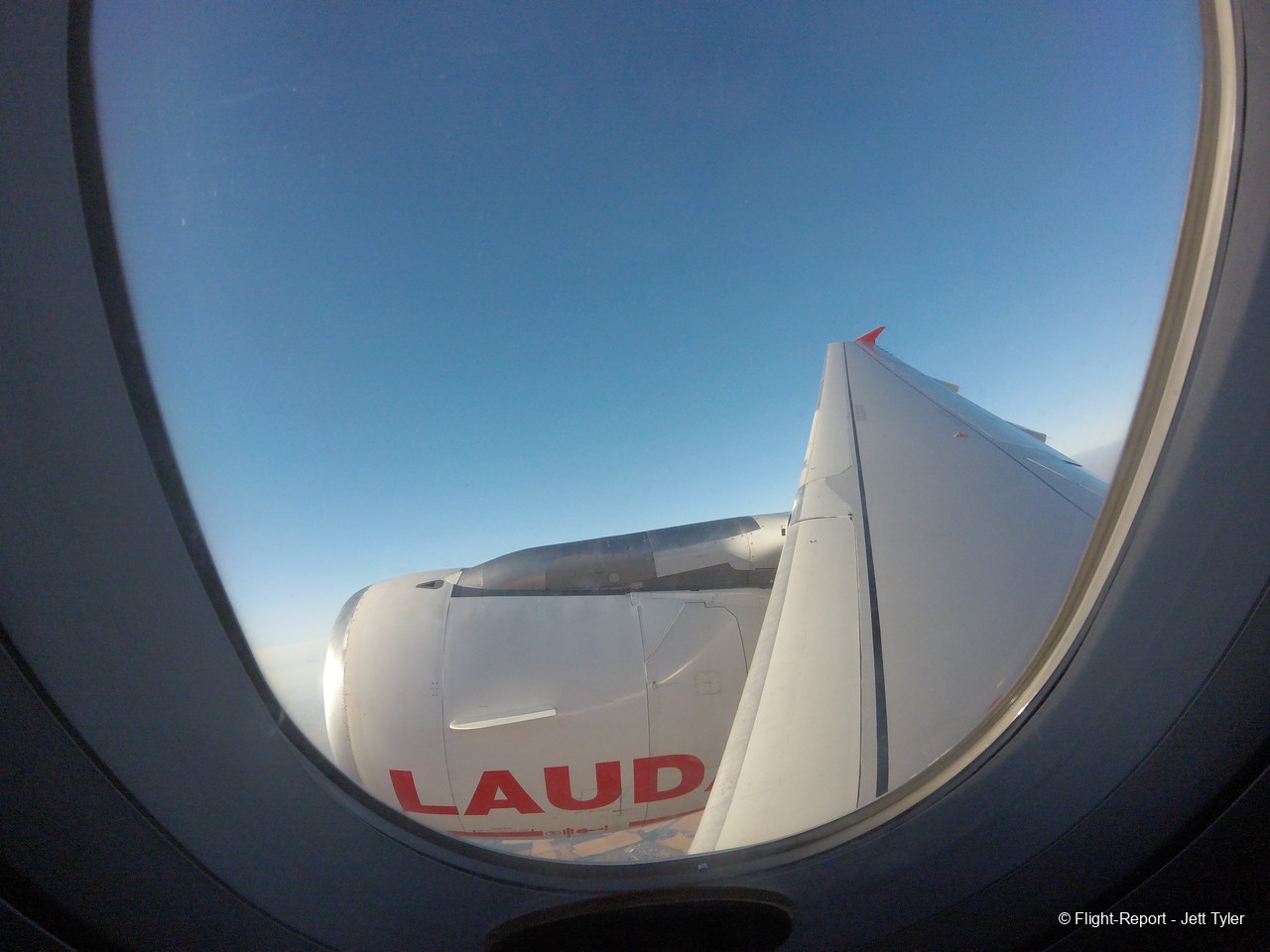 The service on Lauda is the same as it is on Buzz! and Ryanair, I opted to indulge in the classic offering of a 10EUR meal deal as I couldn't get anything in the Airport that morning. This time I combined the Bacon Roll, Hot Tea and a chocolate Croissant, with a side Cola drink for later. 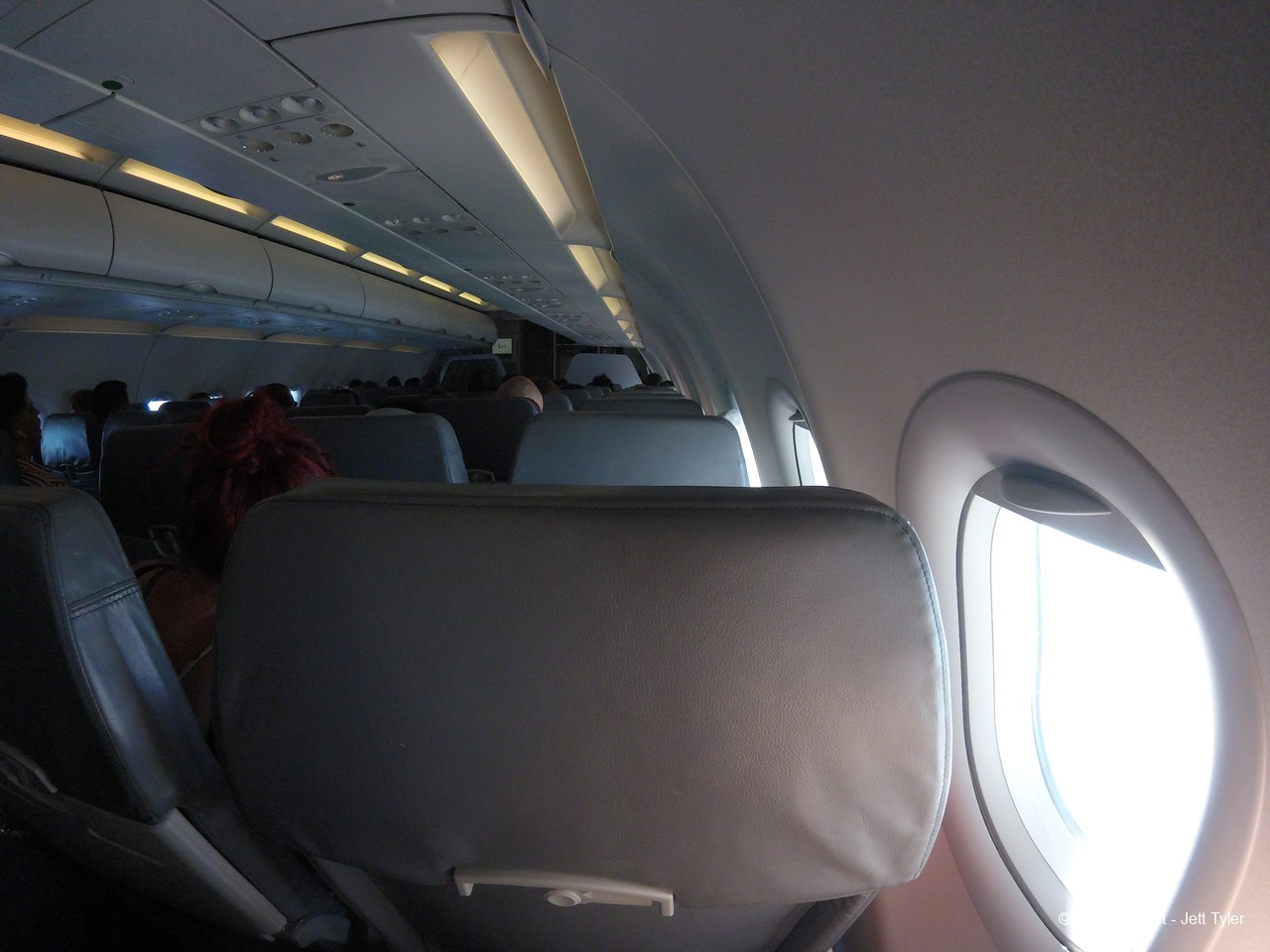 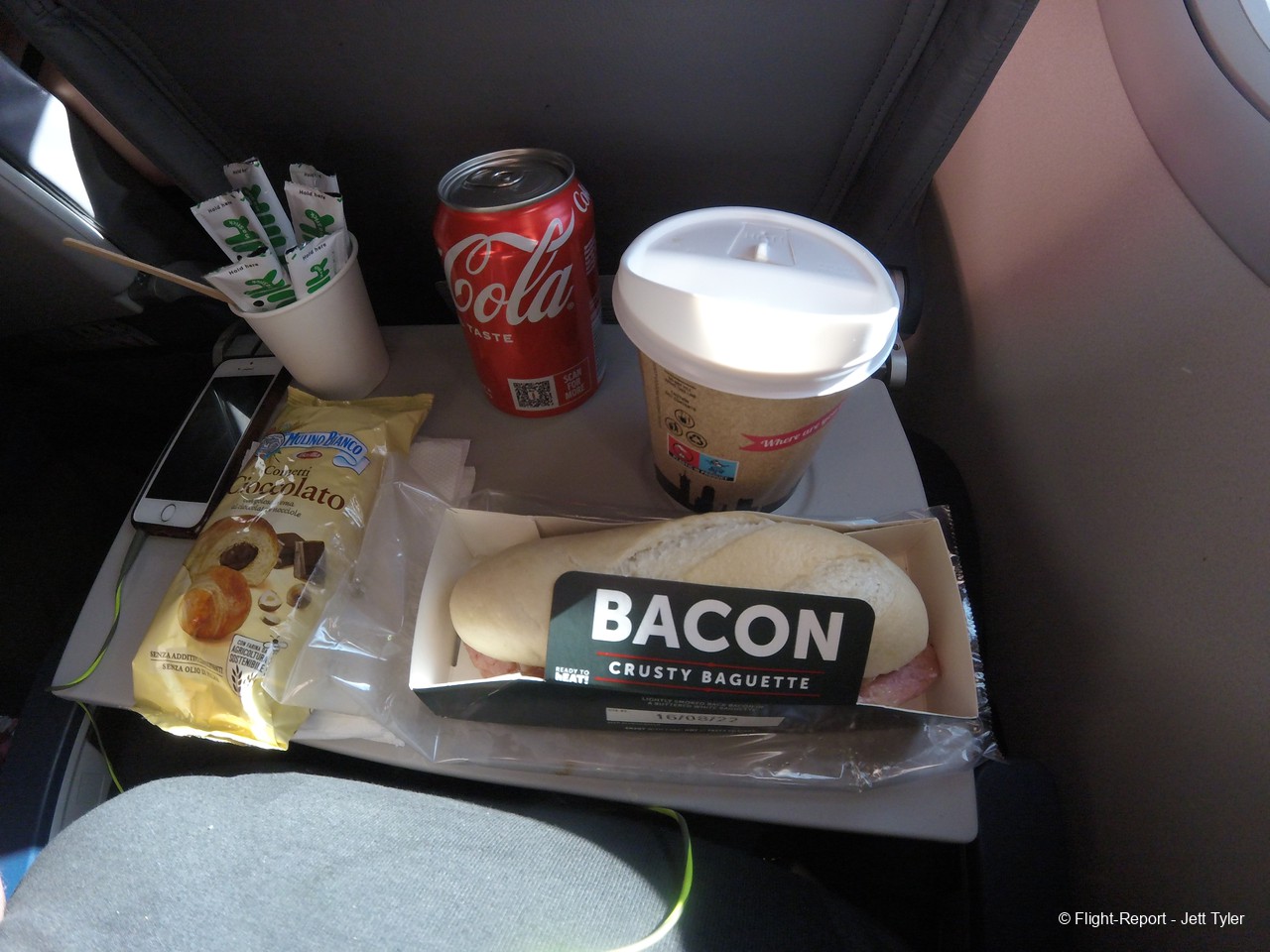 There was some nice clear views over the North Sea that morning. But the flight was quickly passing as they do on intra-European flights. 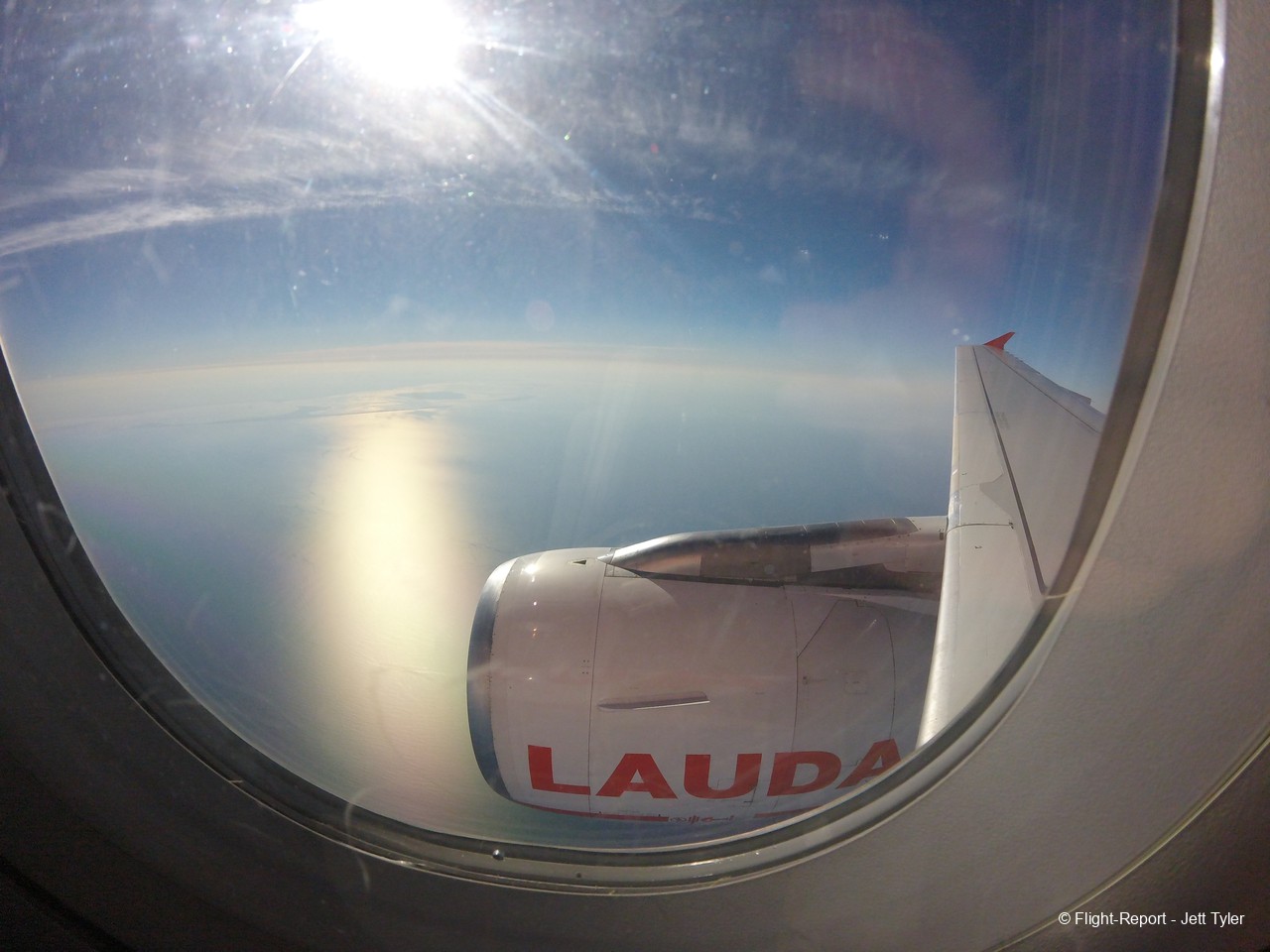 After a good hour inflight, we began our descent and eventual arrival into Billund- my third city in Denmark.

We arrived into "The Home of Lego" and made a short taxi over to the Terminal building, which was full of intra-European flights, we passed over to the end of the Airport, taxiing by two Turkish airliners and a BA A320 before coming on stand in what was clearly the non-Schengen area. We got to disembark the plane via an Air Bridge, a unique one for Ryanair, however as the Lauda A320 doesn't contain its own stairs built in- I guess this was nessesary. 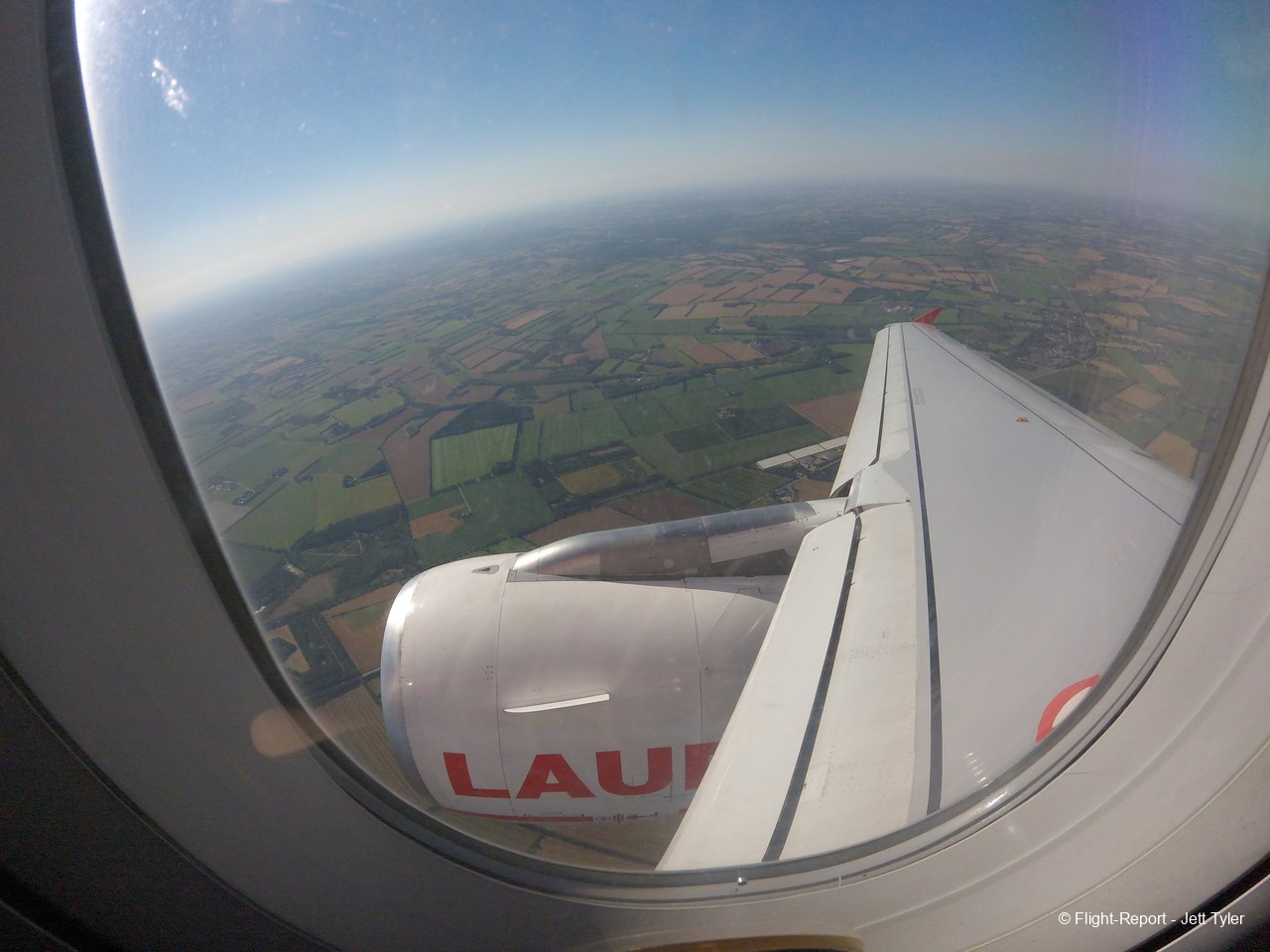 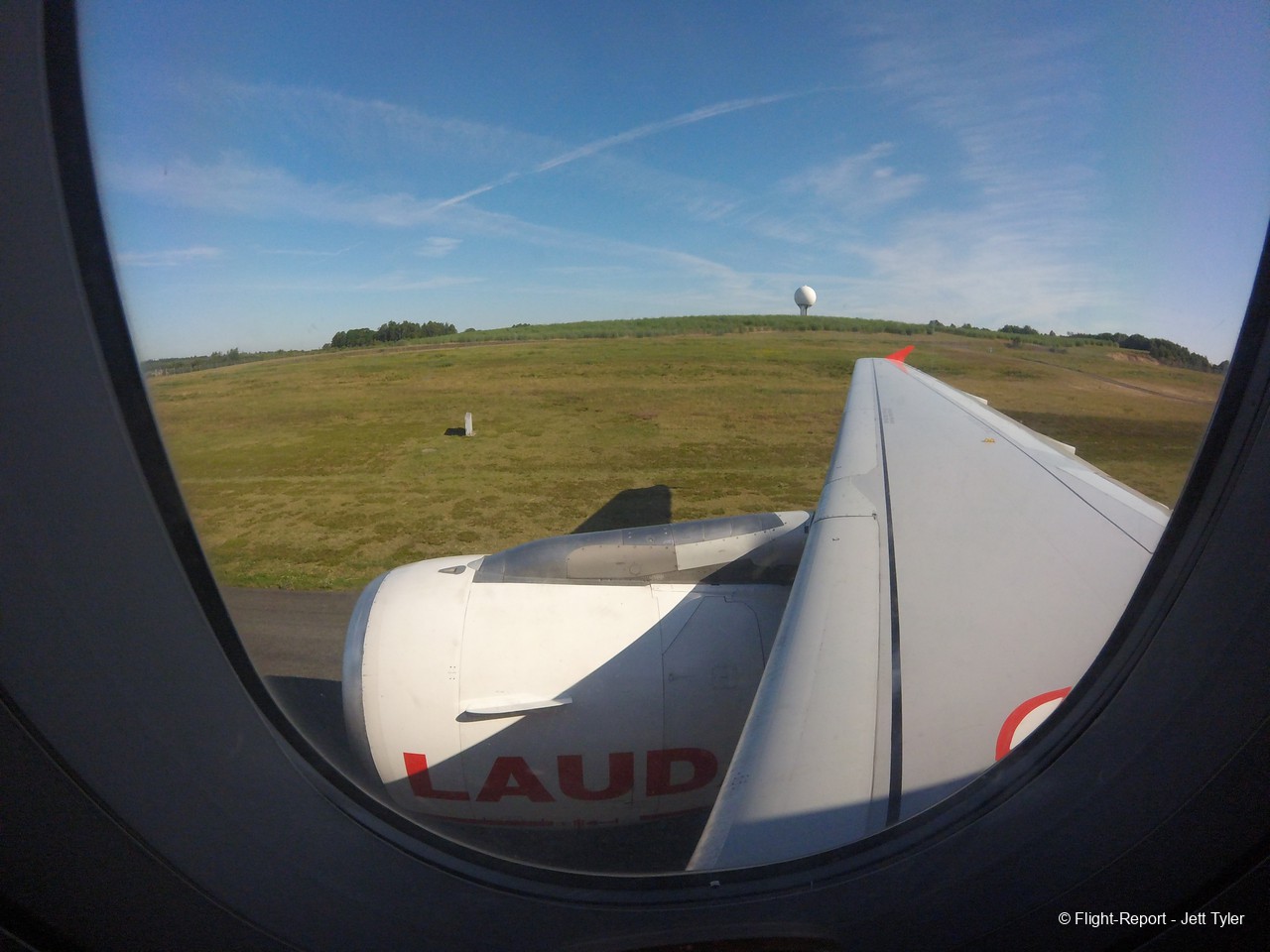 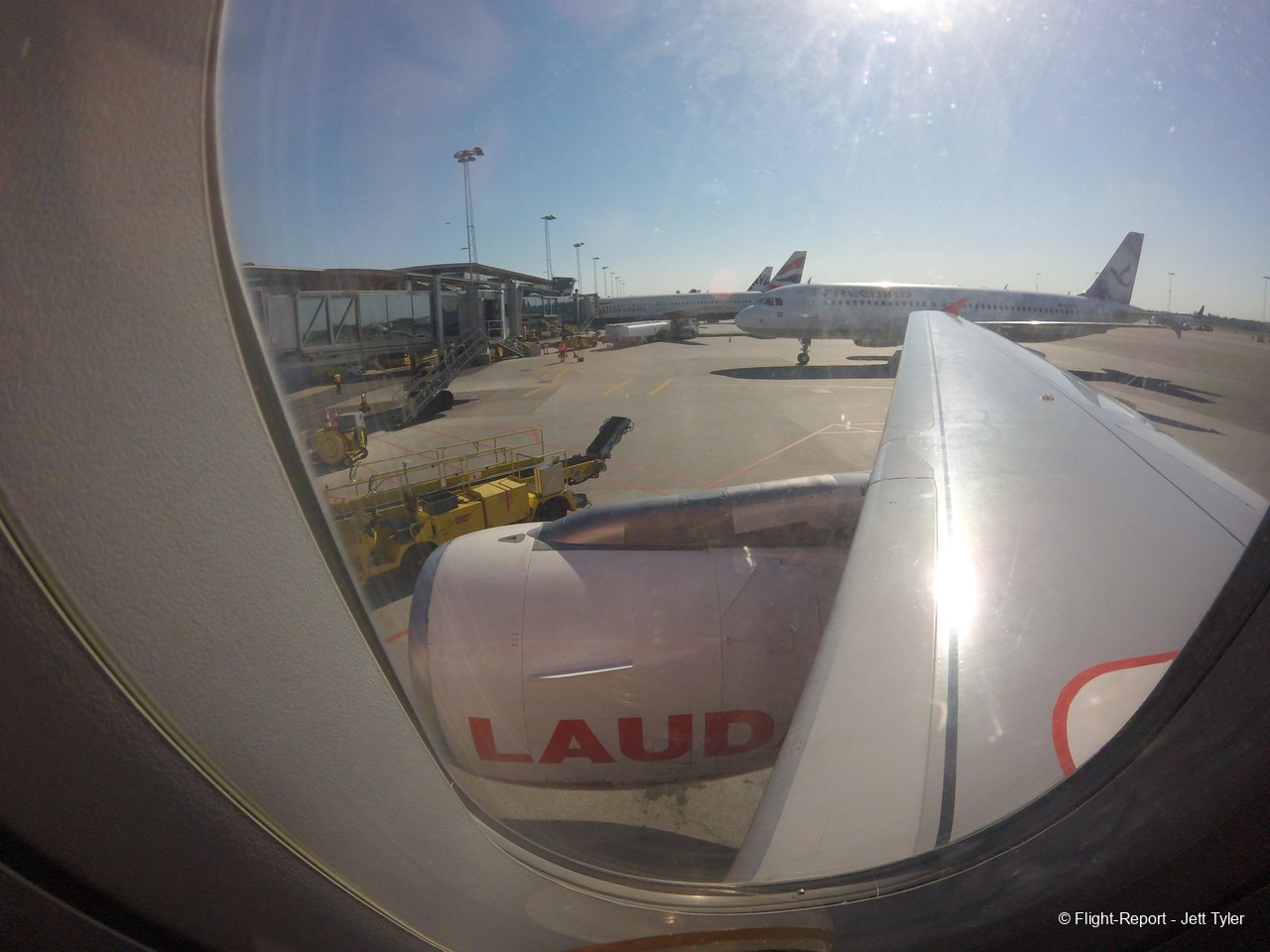 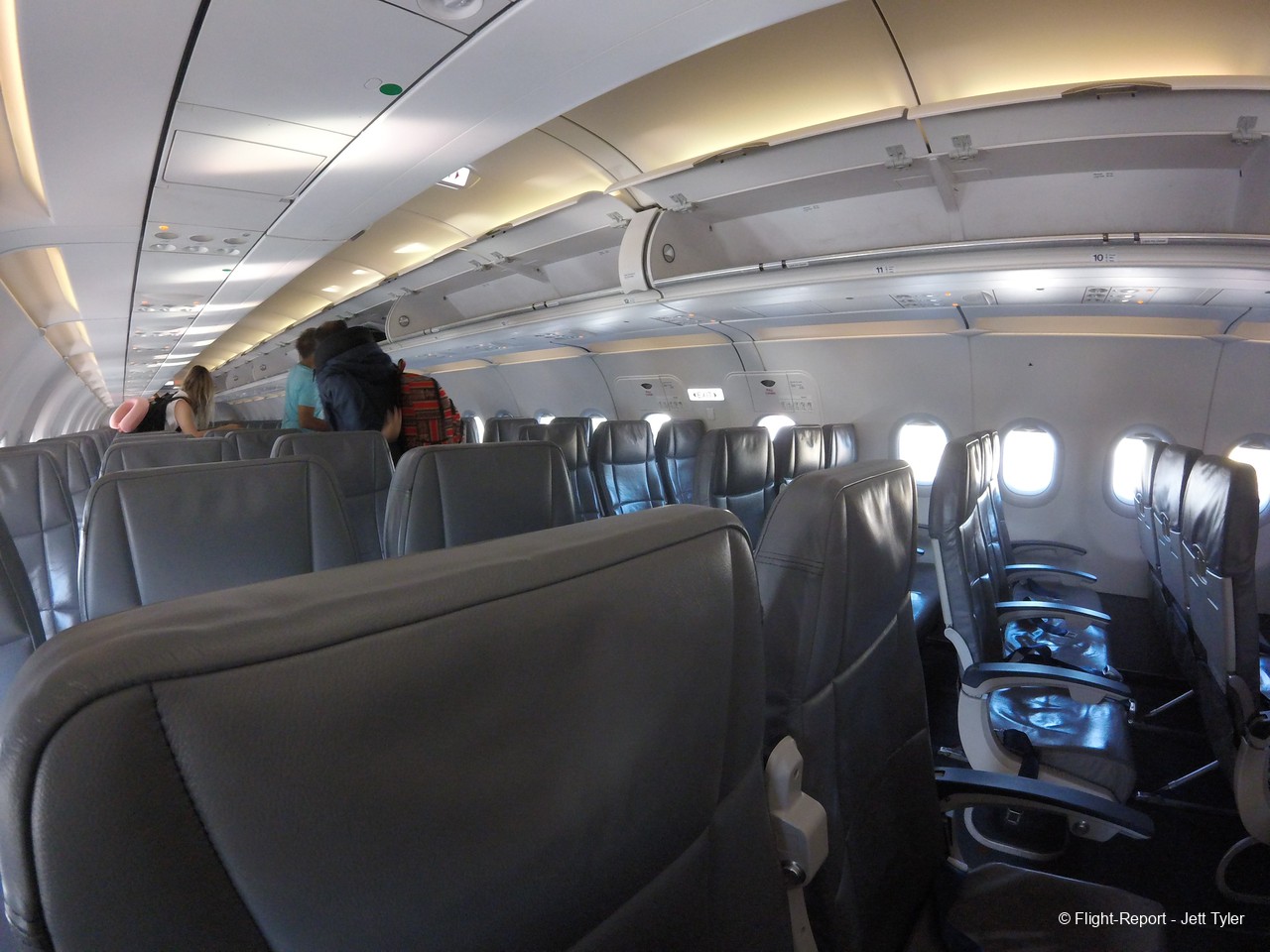 Getting off the plane it then took a good 90 minutes to clear the passport control check which only had two officers on. One doing the EU passport holders and the other doing non-Schengen passport holders (mainly Turkish & British nationals given the flights that had arrived). But we eventually got there and it was on for a 24 hour stay in Billund! 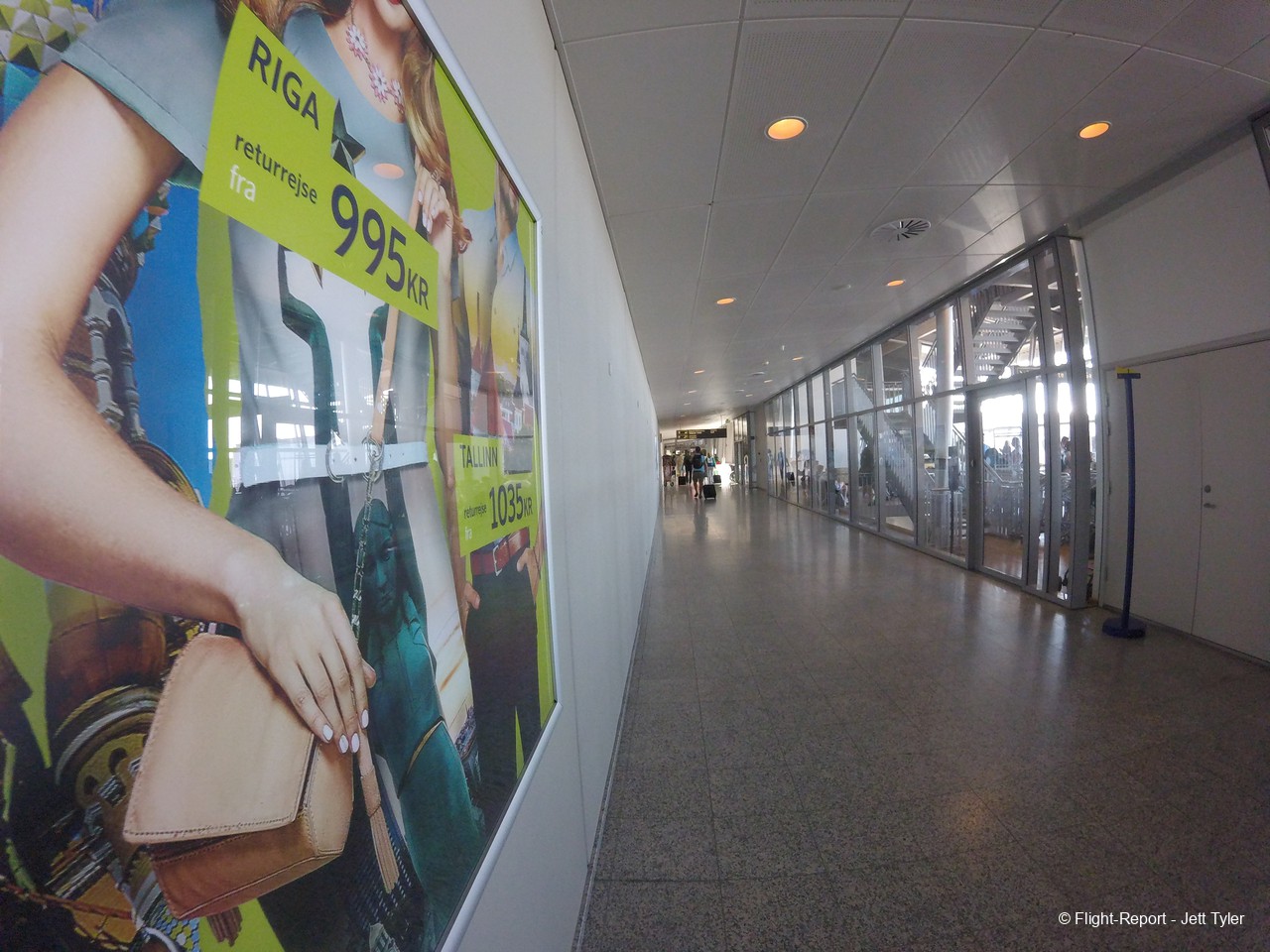 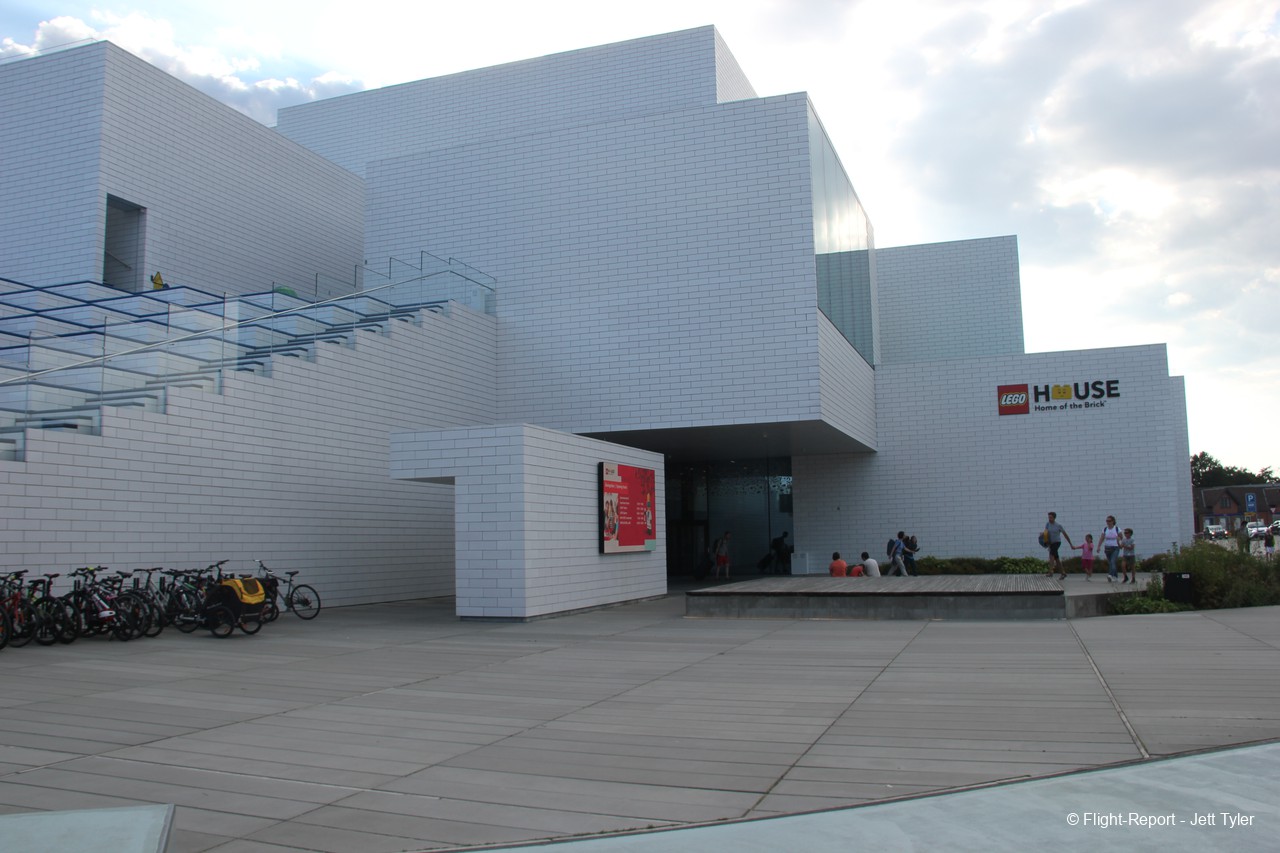 Lauda- Nicer version of Ryanair, I was happy with my experience as the flight was on time and I got a cheap trip to a new city for me!

London STN- Very packed, couldn't get into any bars or restaurants and there vending machines that day weren't working. The parking service was good and I was happy with the Priority Security service.

Billund Airport- Arriving into Billund was very inefficient as it took 90 minutes to be done. However my departure experience was nice, which I'll get to in a different report soon hopefully!