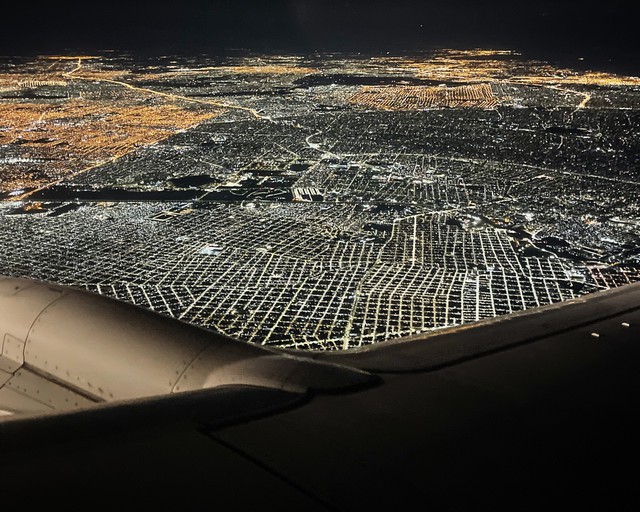 Welcome to yet another flight report. This time, I'll be flying economy on Aerolineas Argentinas' Boeing 737-800. Today's destination is the southern city of Bariloche, one of the most popular tourist hotspots of Argentina and South America. I know that I've said in my last flight report that I wouldn't be flying AR again anytime soon, but as it turns out, it was the only airline flying to BRC that allowed me to book an emergency exit row seat free of charge.

As this is a true red eye flight, my completely sleep deprived self arrived at the domestic terminal at 01:00 in the morning. 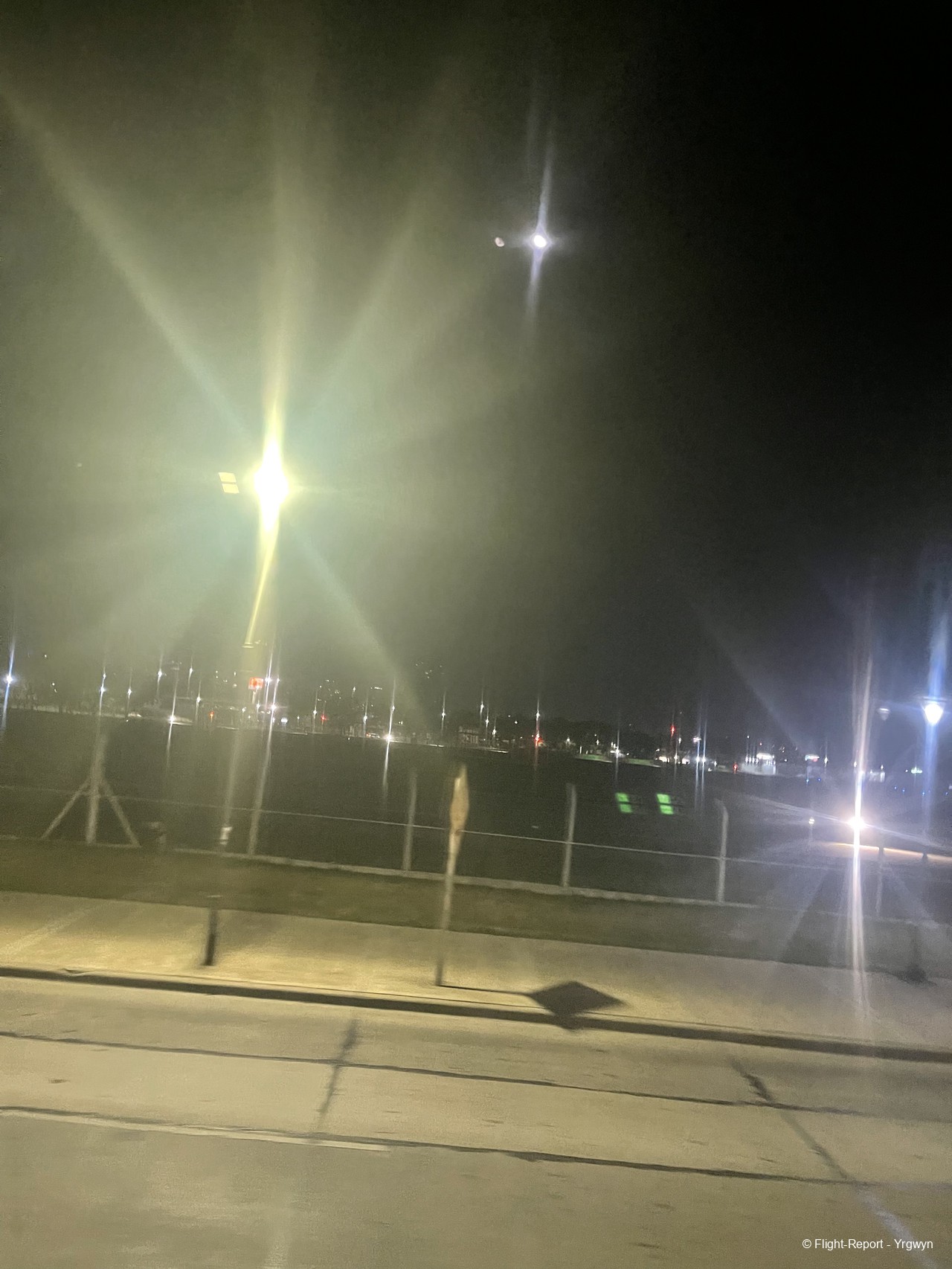 Sleepy AEP was already getting crowded as there were many flights departing at 4 AM. 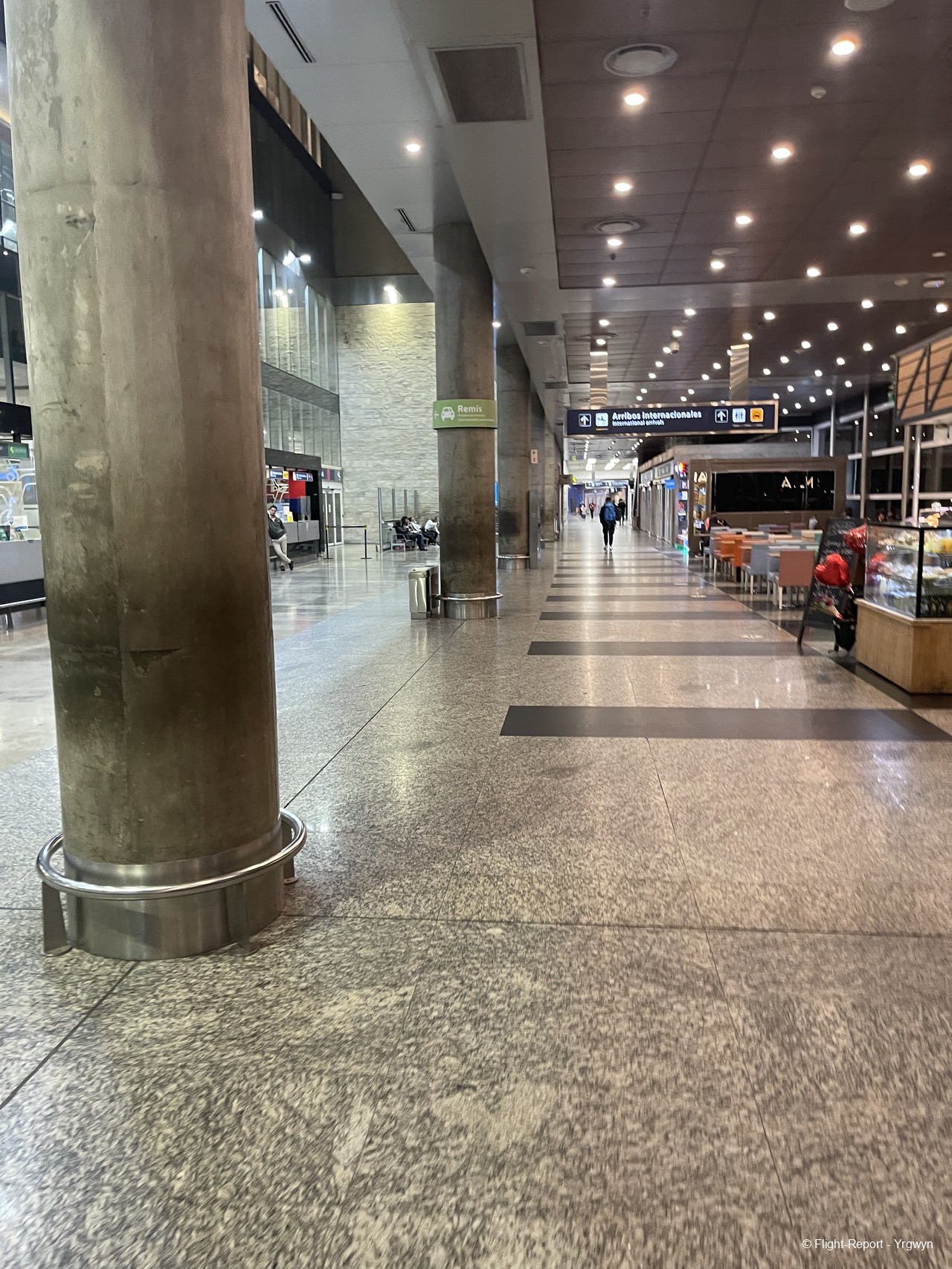 The check-in counters were already crowded. I queued up, dropped of my baggage and got my boarding pass. 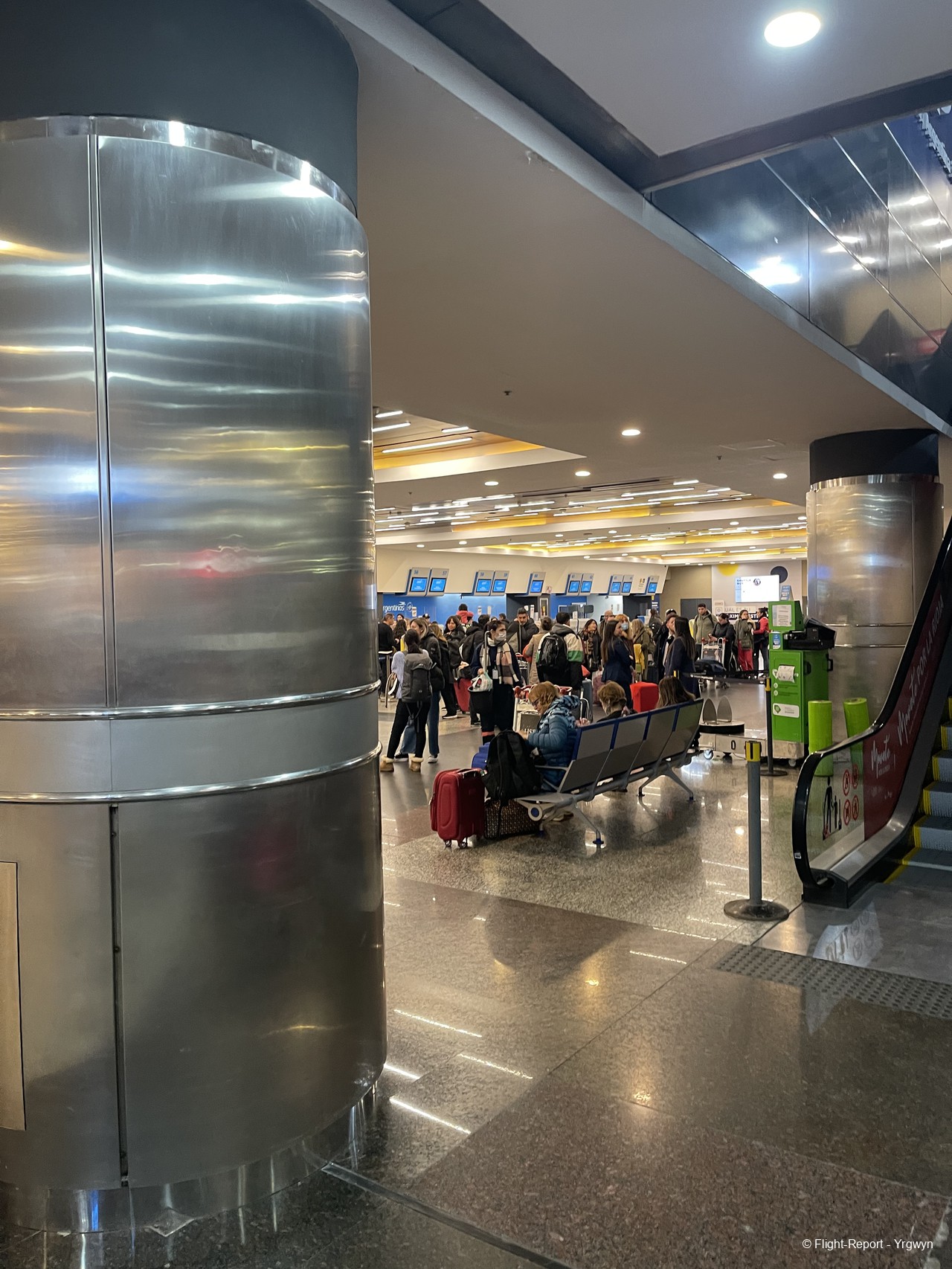 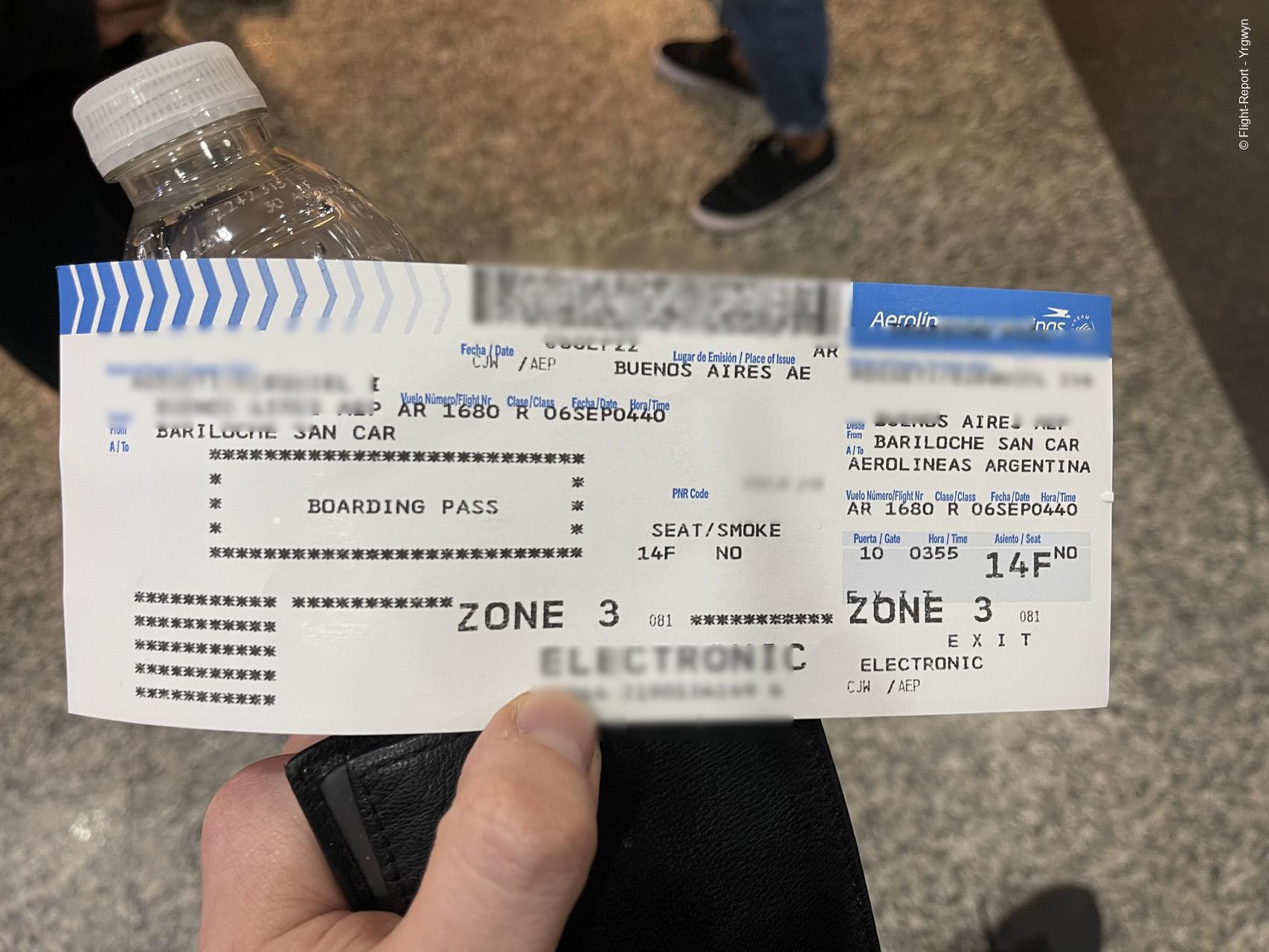 After this, I breezed through security as there were only three passengers before me in the line. I went through with my bottle of water with no problem and before I could think about it I was airside. Didn't wander around the terminal this time as I was too tired. 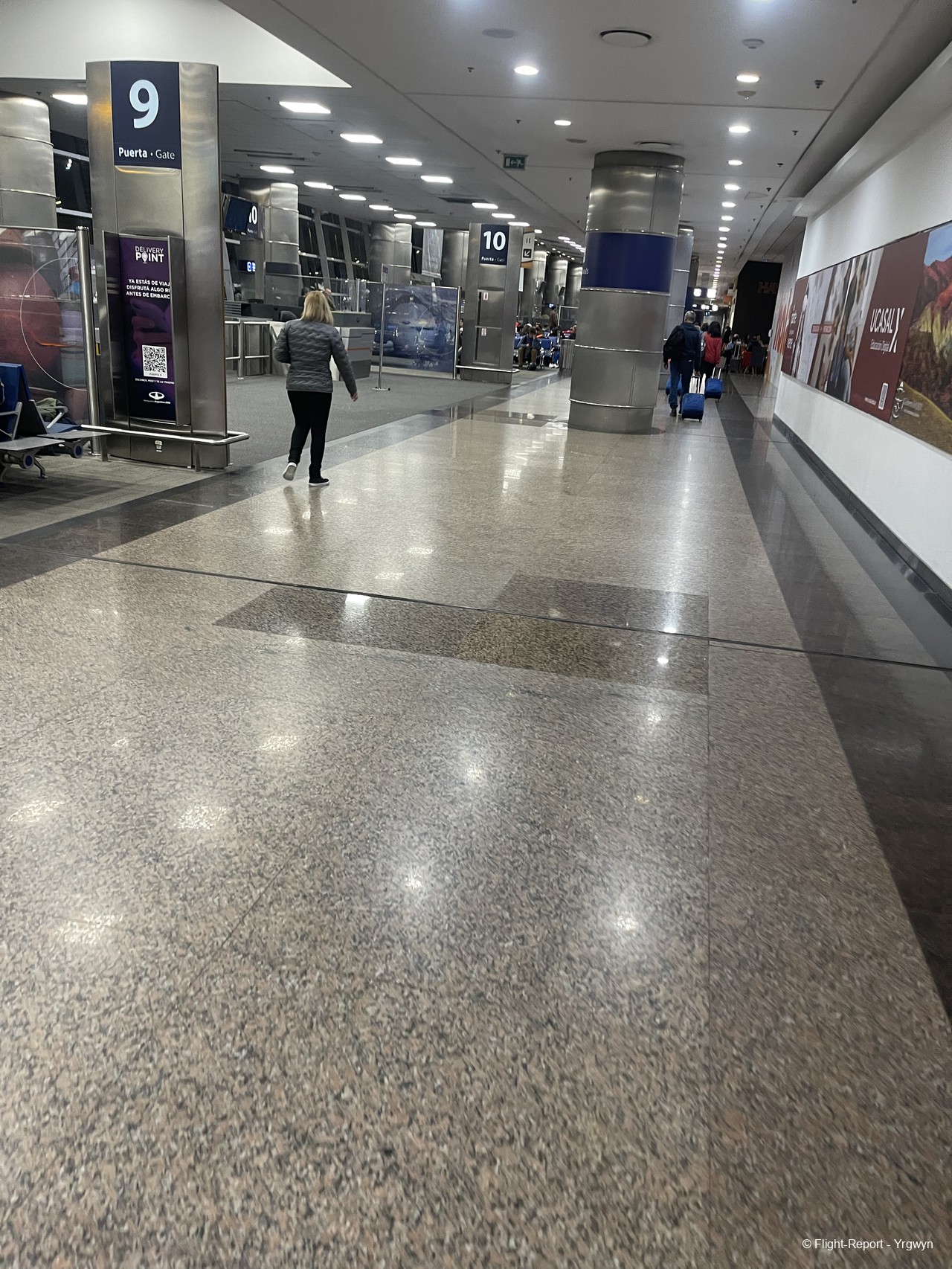 Boarding started right on time at 03:55. First to board were Sky Priority passengers, passengers requiring assistance and families with small children. Then we boarded by groups. Today's ride is LV-FUB, 8.1 years old. It has 8 Premium Economy seats and 162 Economy seats. My first impression was that the plane was dirty and the premium economy seats looked dated. Didn't take photos because I didn't want to annoy the passengers sitting there. 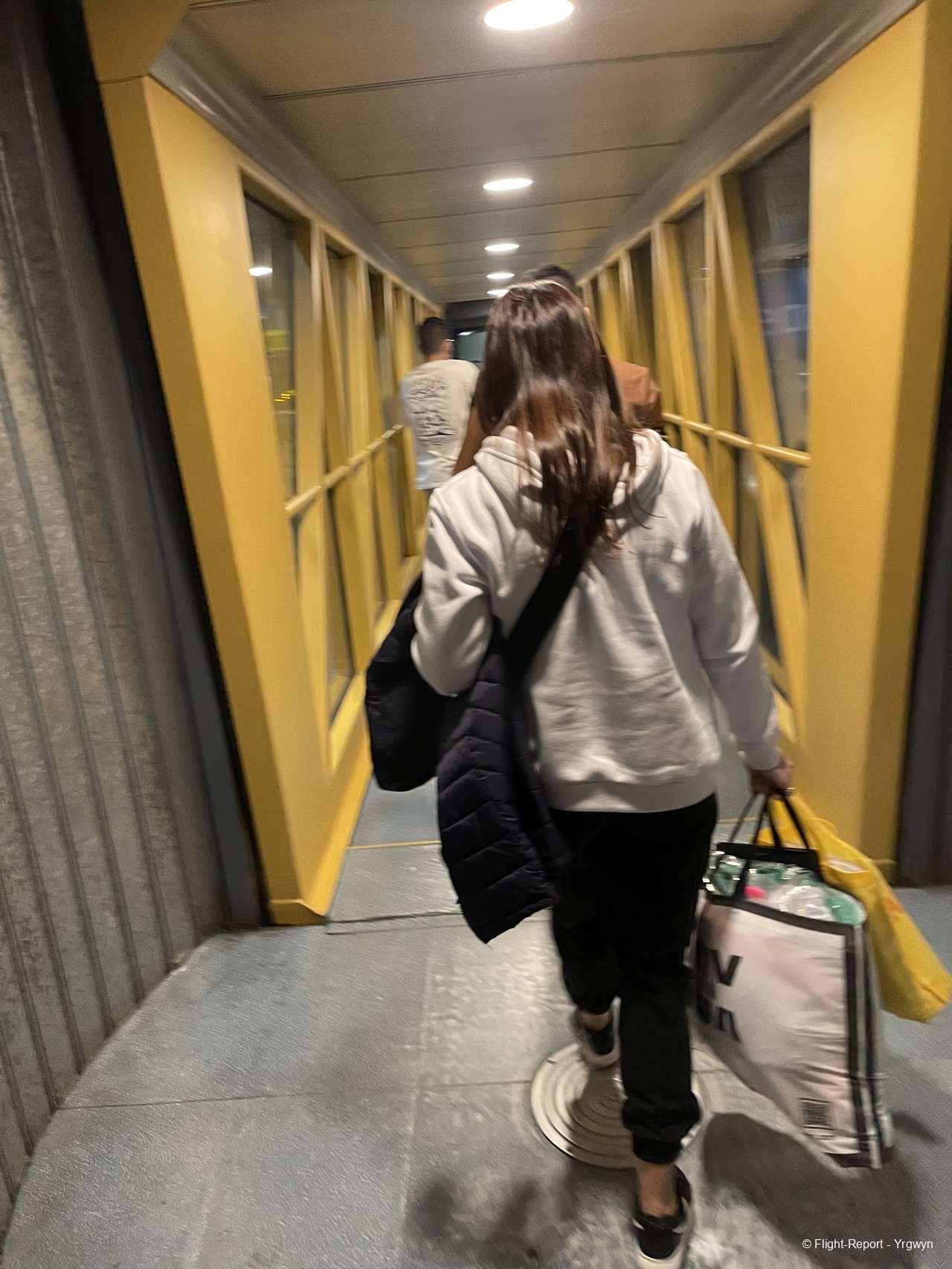 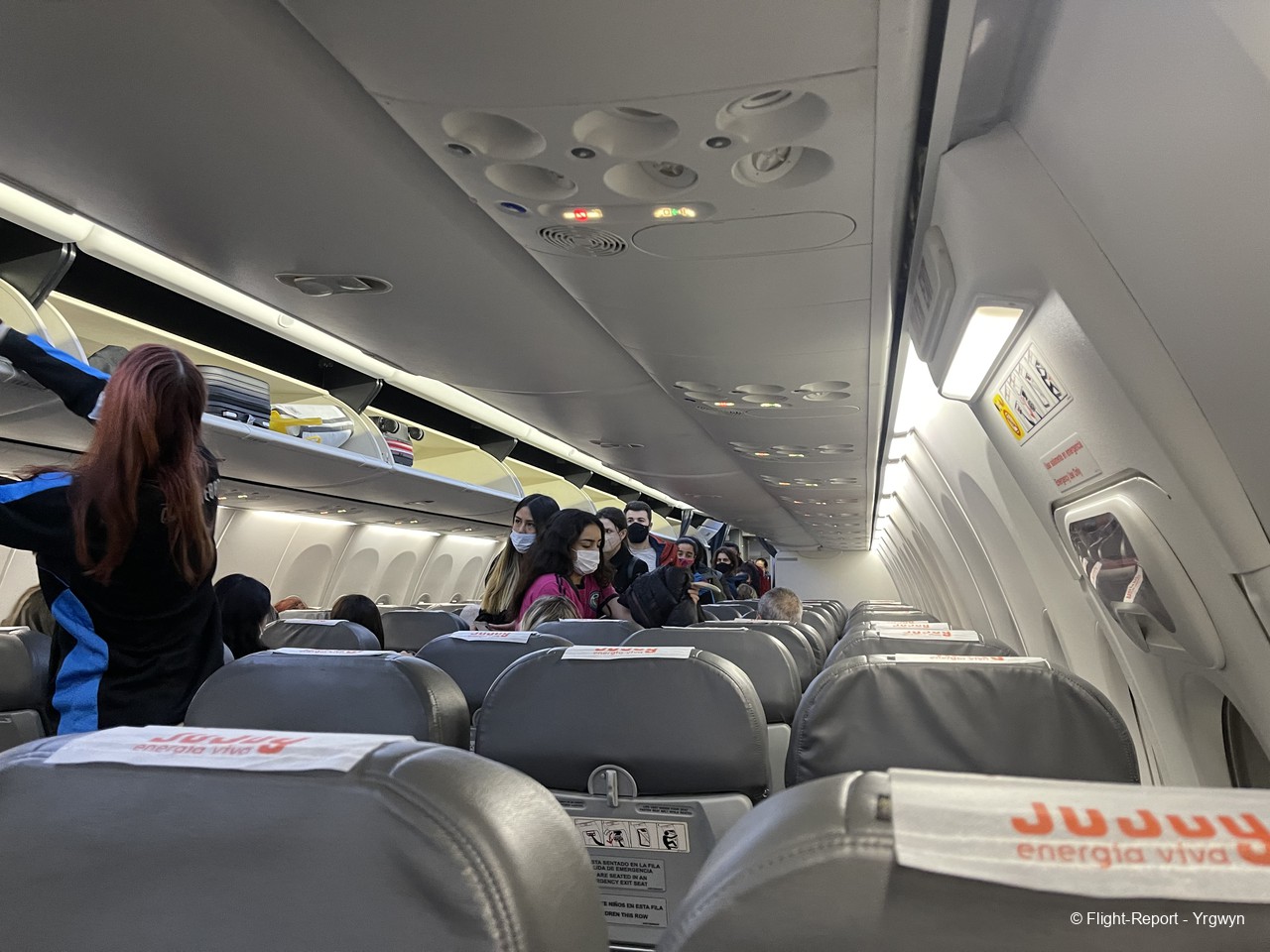 Legroom at the emergency exit row was at the very least generous. Being 1.94m tall I could stretch my legs all the way and that's incredible for an economy seat. This was my first flight flying on such row, hence the excitement. My only flights before this one on the 737 were on Ryanair. 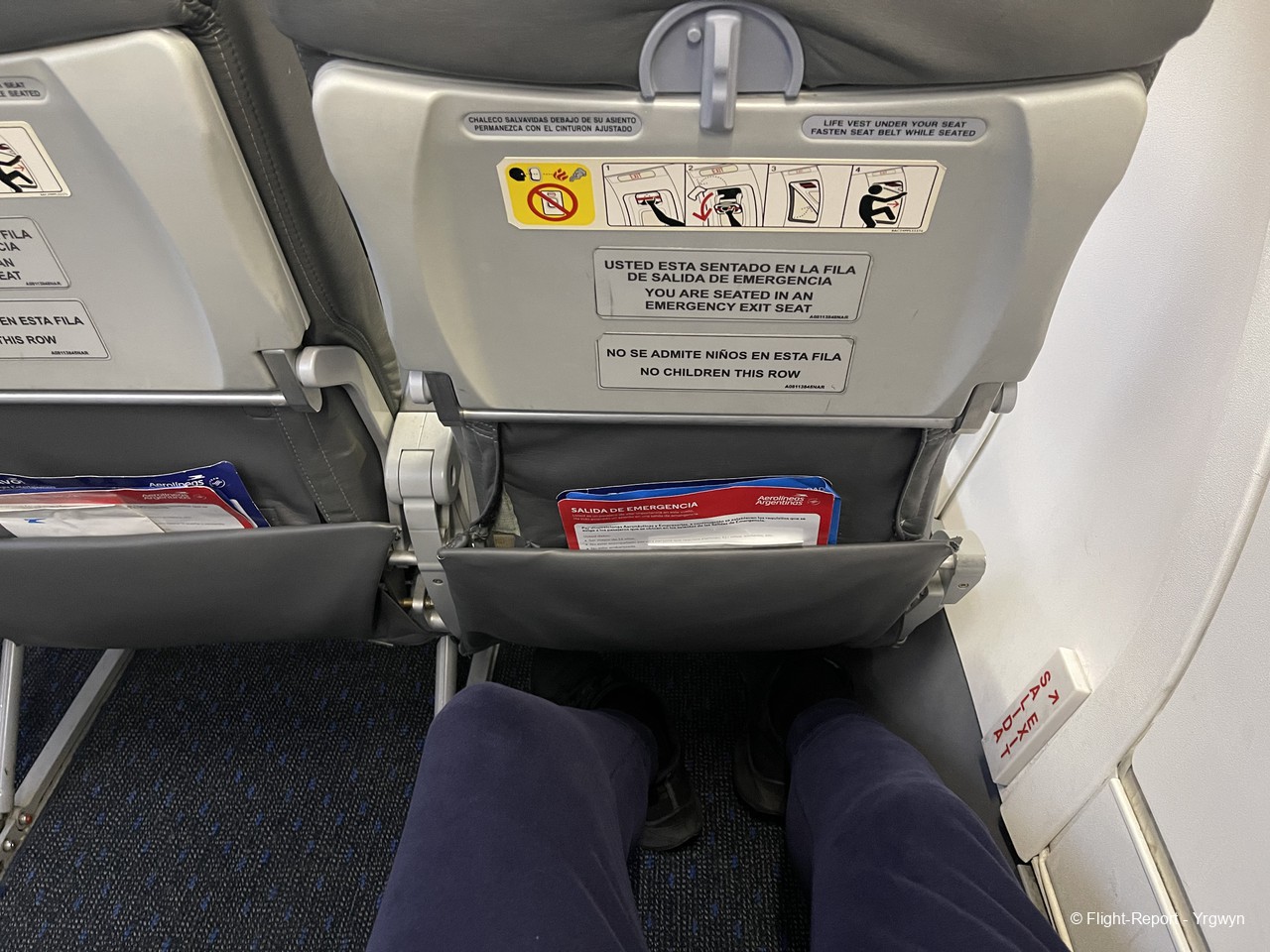 "NO CHILDREN THIS ROW" - Seems like a caveman had translated that phrase.
On the seat pocket there were a safety instructions card, a special emergency exit row briefing card, and the instructions for the onboard entertainment system which of course wasn't working. 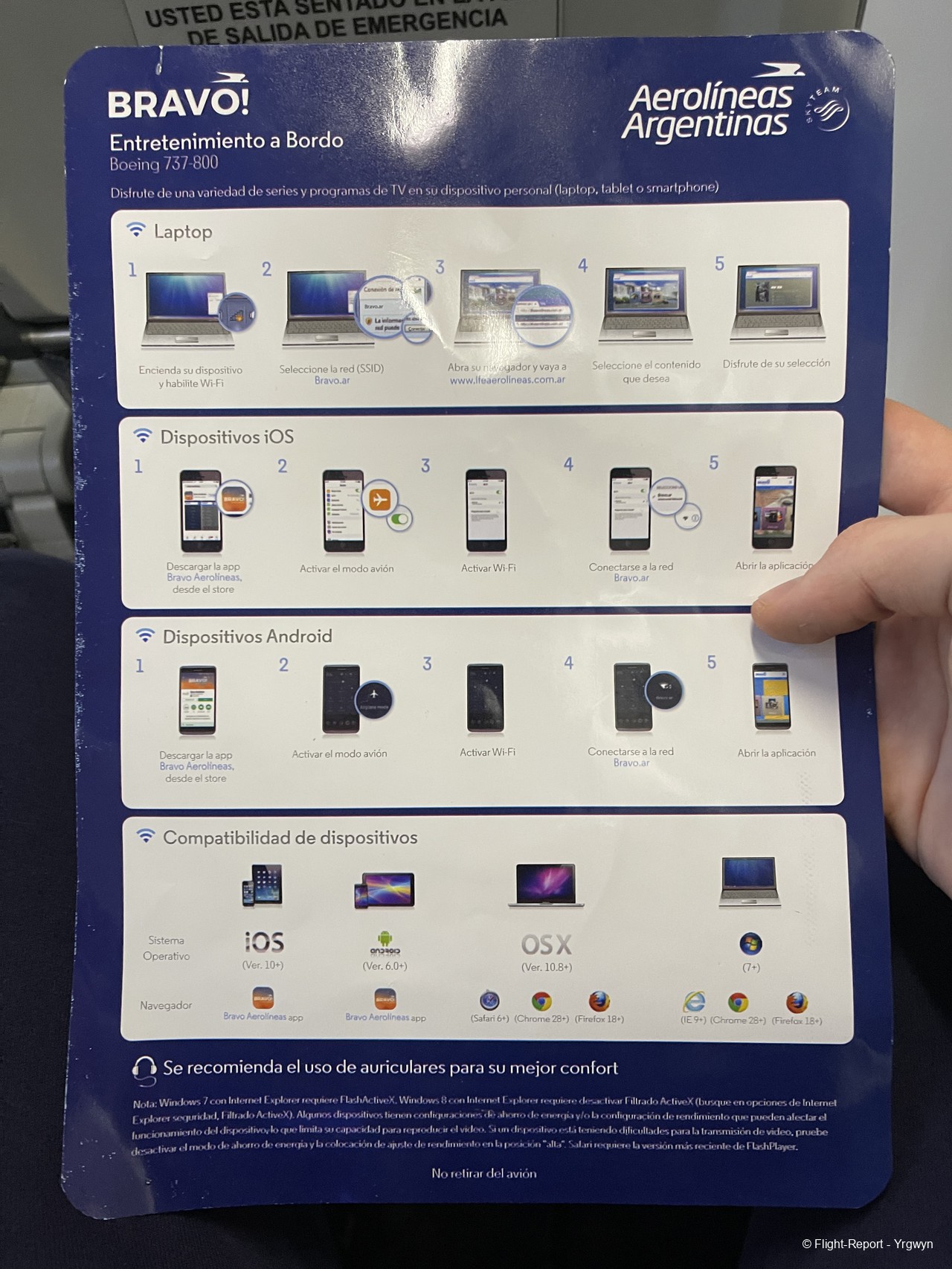 Once everyone had boarded doors were closed and we started pushback. We then taxied for runway 13 and were the first flight to depart AEP that day. 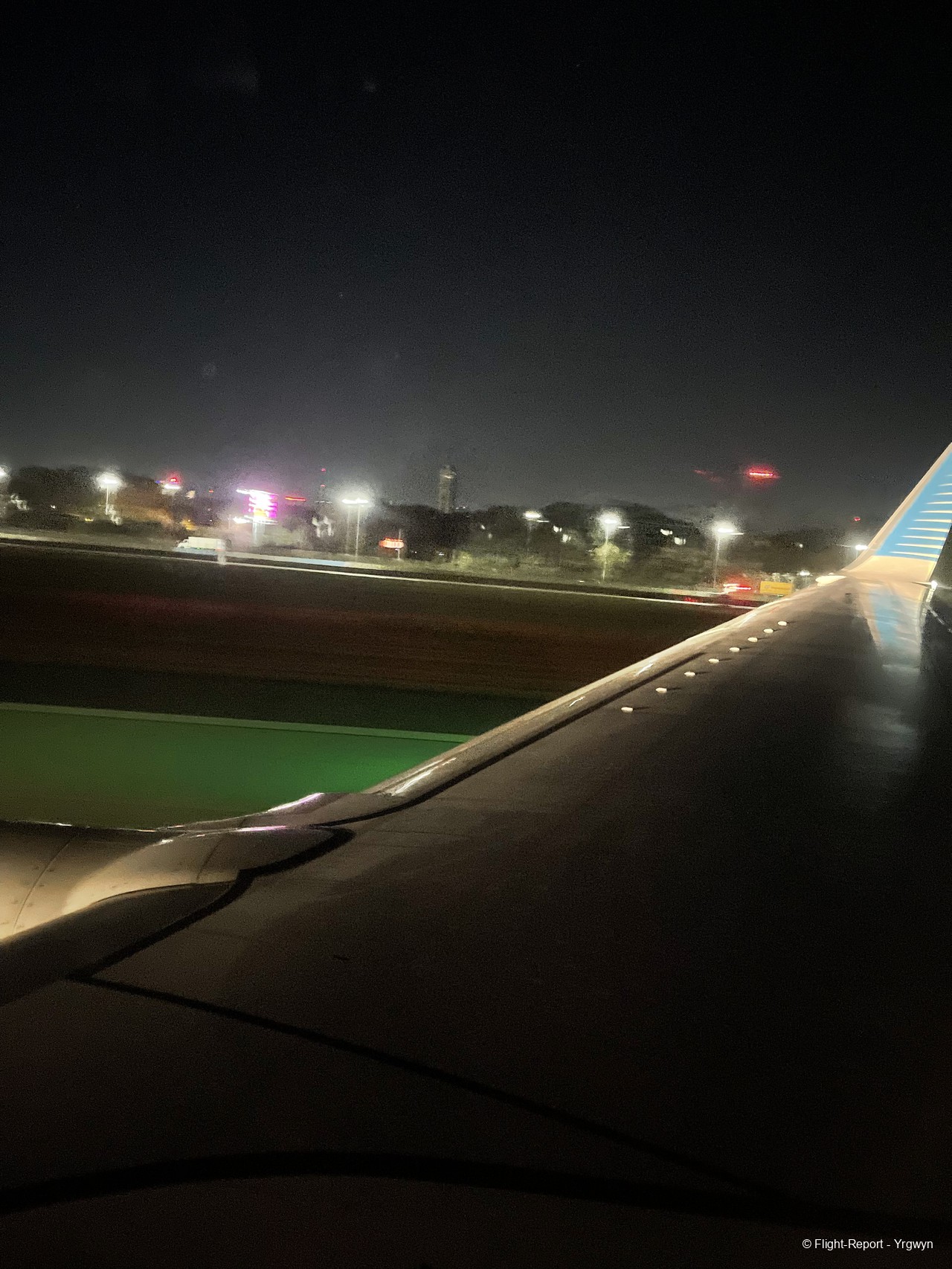 We used at least 80% of the runway for takeoff. Once airborne, the plane turned right tracking southwest. We flew by the famous 9 de Julio avenue, the widest avenue in the world, right besided the obelisk as we climbed for FL360. 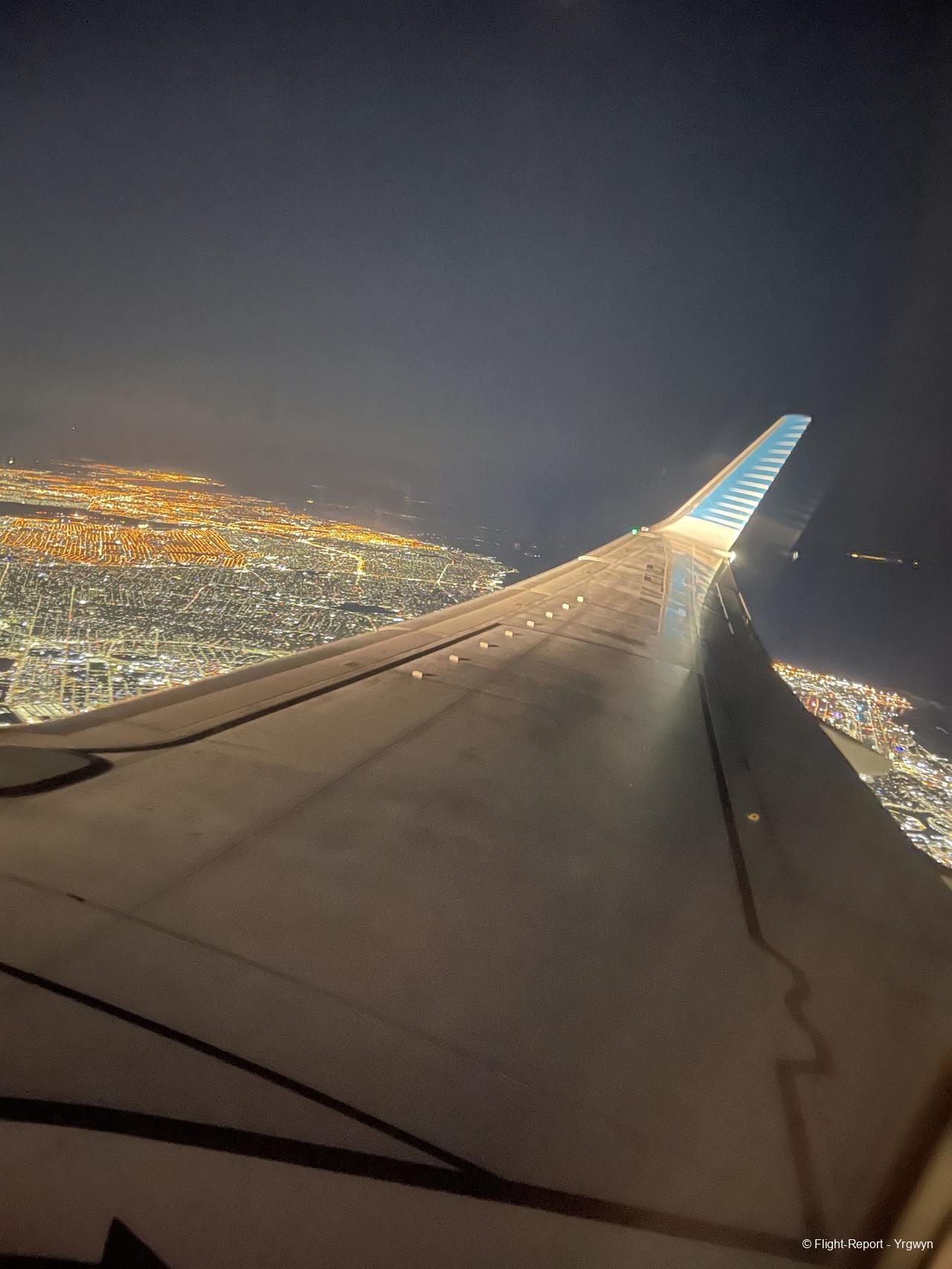 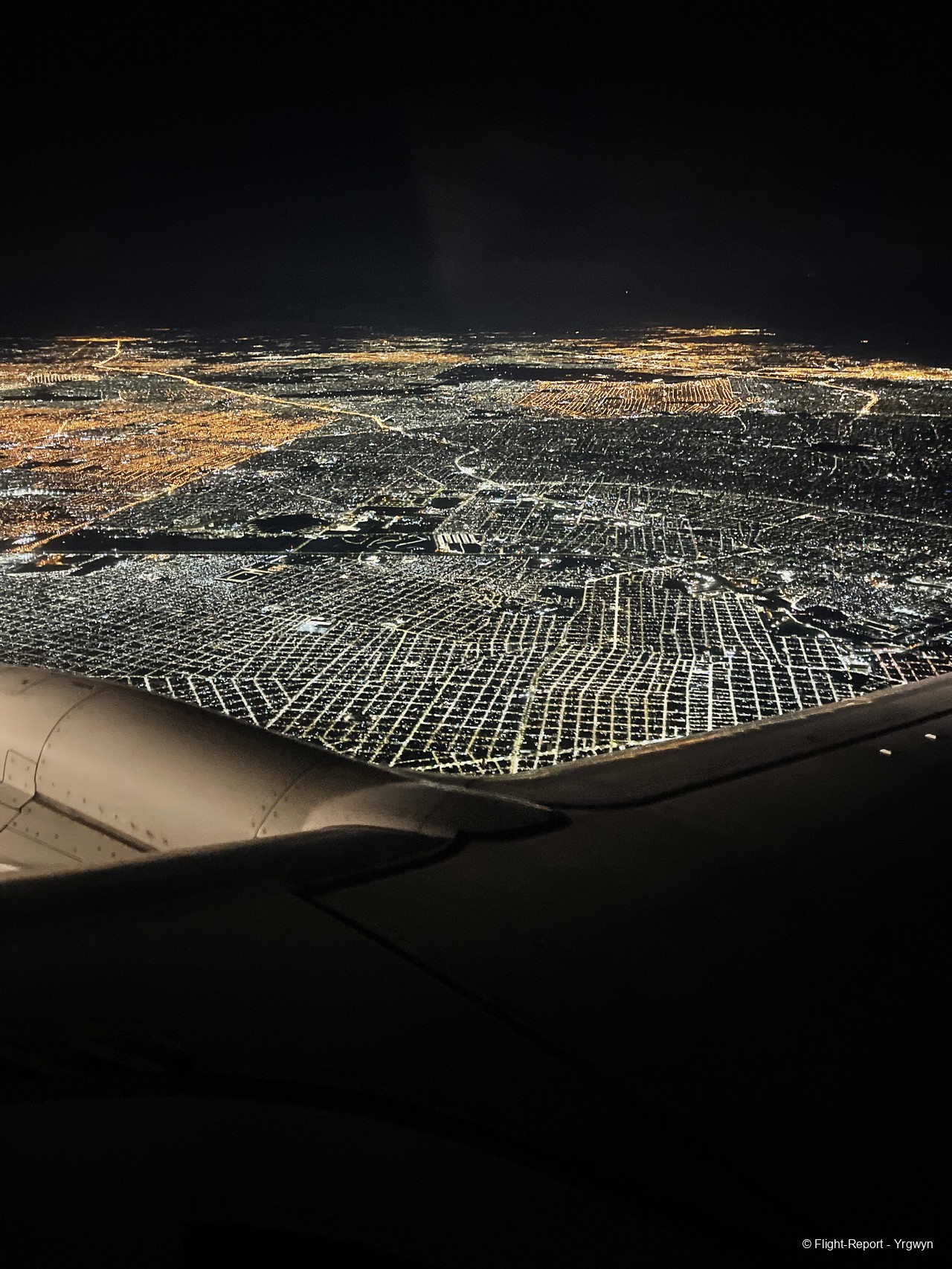 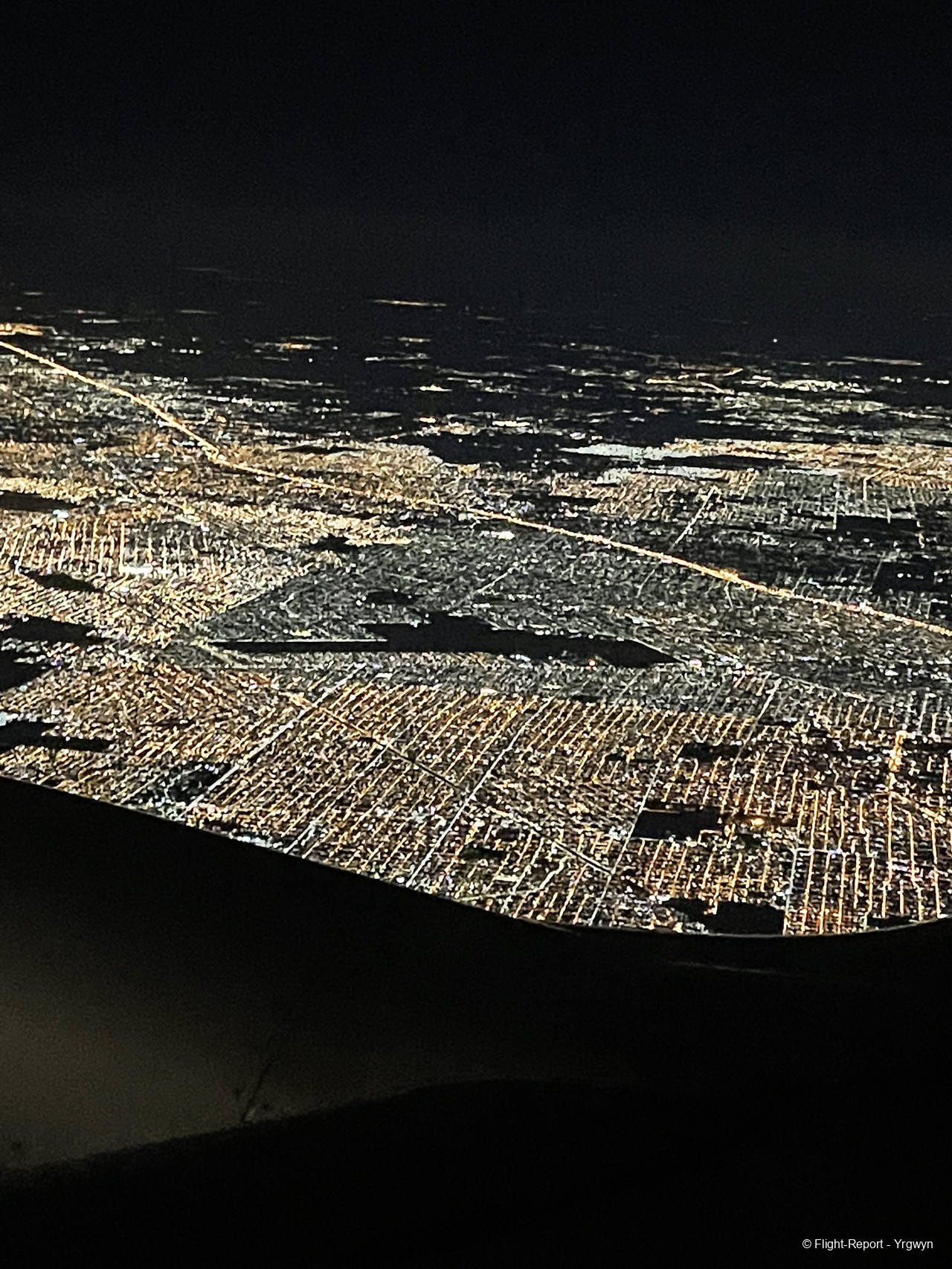 We flew east of Morón aerodrome, home to lots of flight schools. After reaching our cruising altitude I called the FA because I wanted a glass of water. She came surprisingly fast, but instead of bringing the water to my seat asked me to get up, walk to the galley and grab it myself. She wasn't very nice but I couldn't say that she was mean. Am I in the wrong for expecting the FA to bring the water to me? 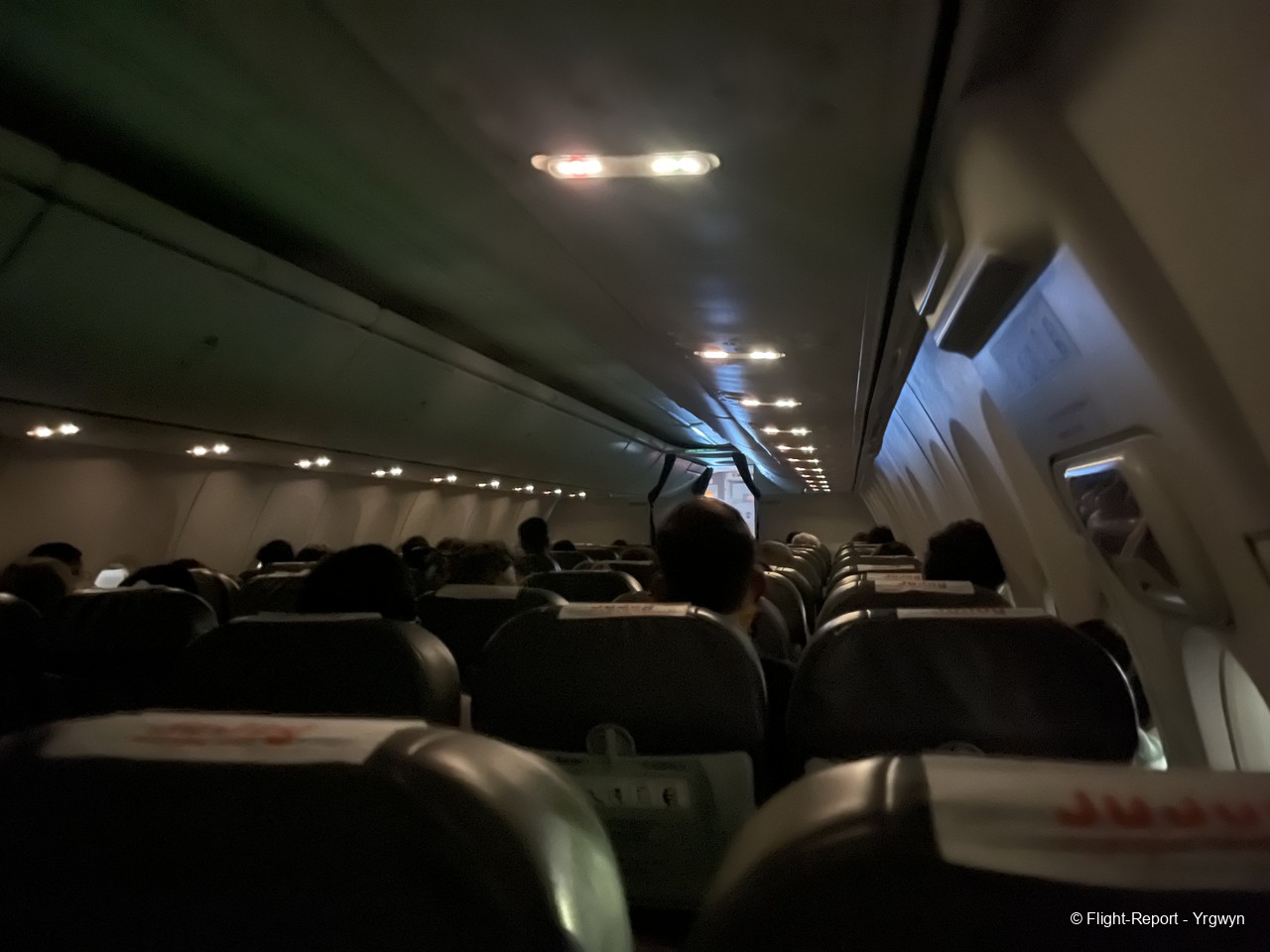 Most people were already sleeping by this time, and I decided to do the same. There were no passengers next to me, which would have been a plus if I could lift the armrests, which wasn't the case for the emergency exit row.

I couldn't fall asleep, so I decided to visit the toilet. 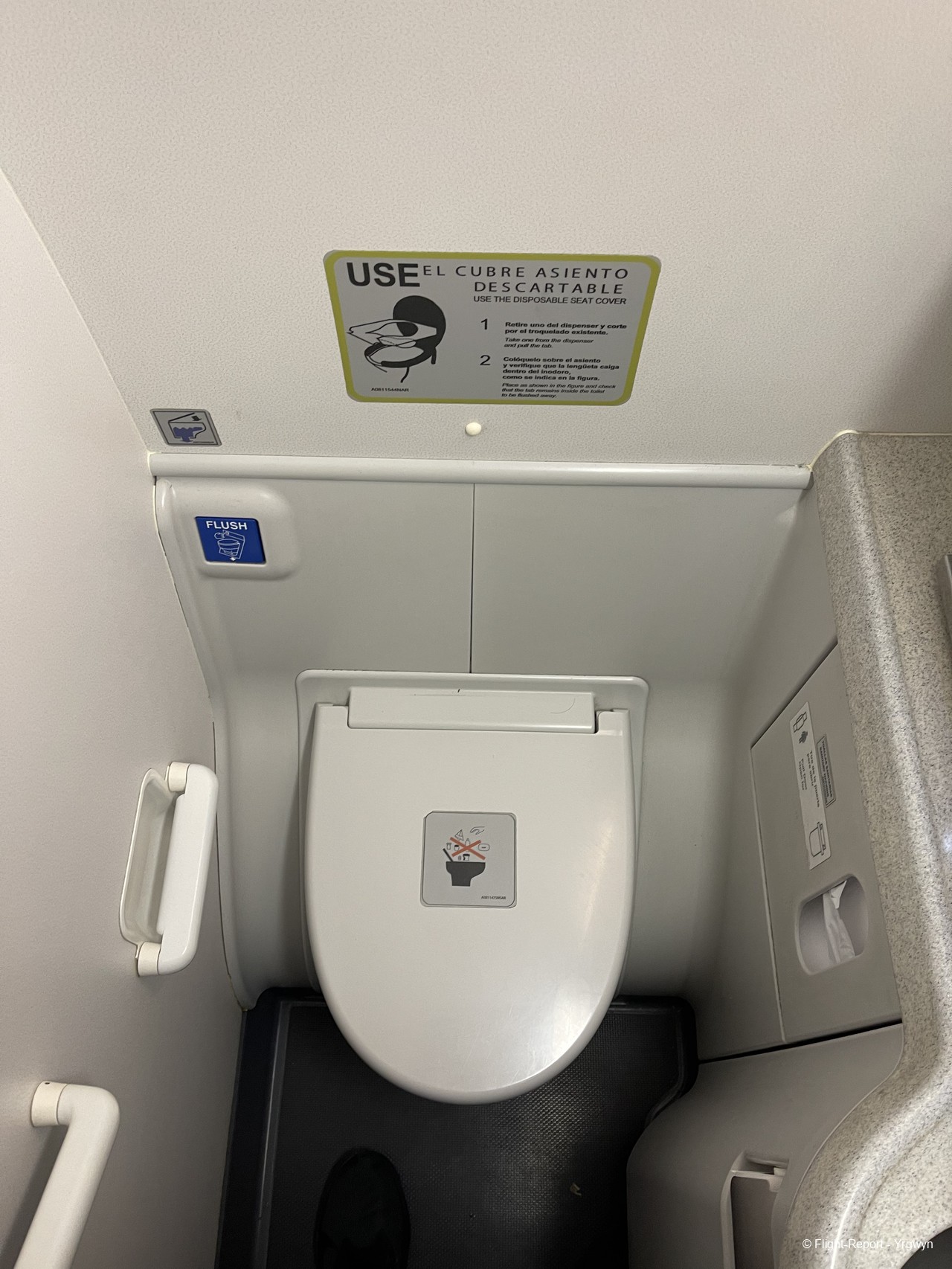 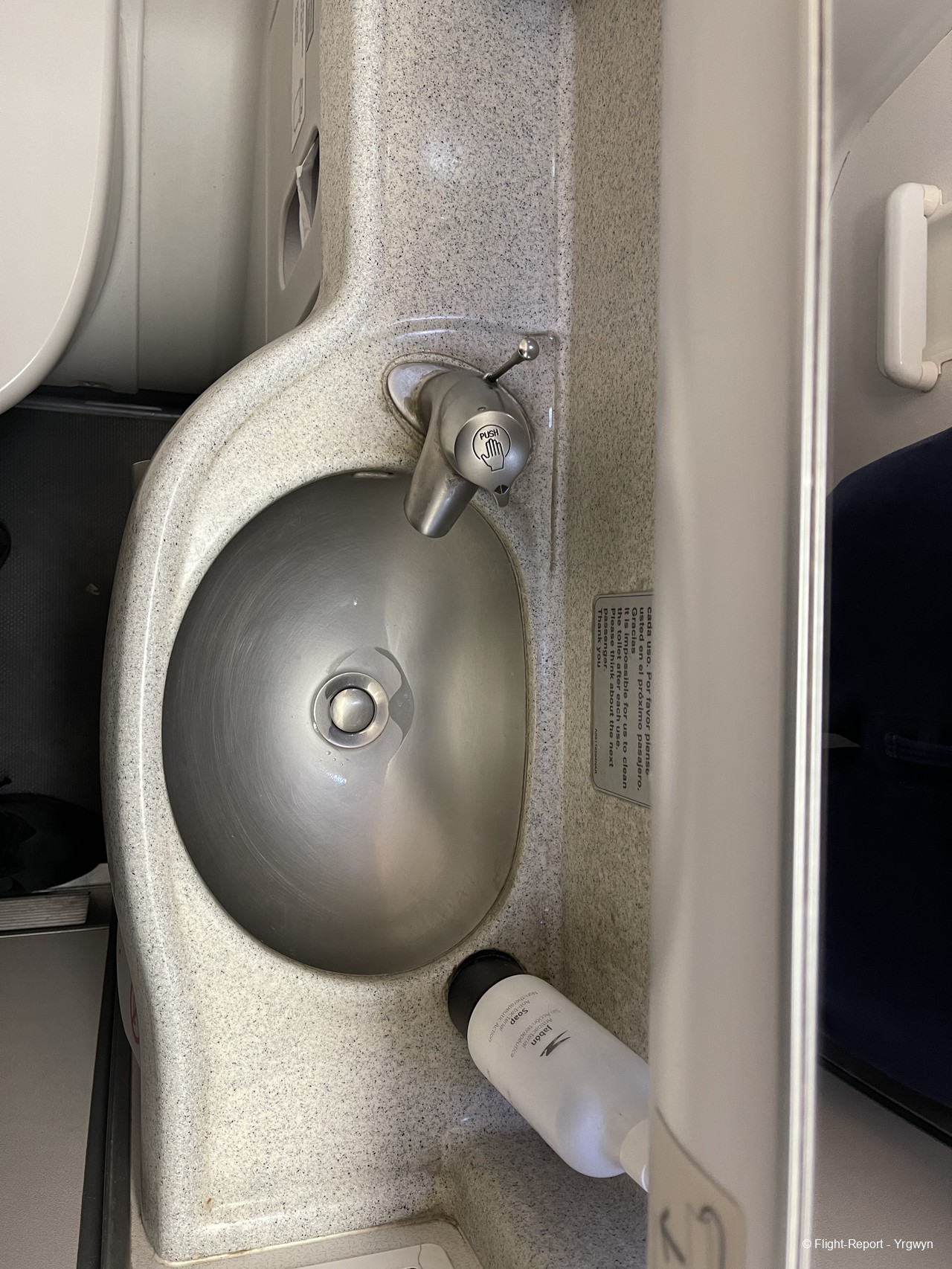 It was very small and basic, but thankfully clean. After the quick toilet visit I was back at my seat trying to fall asleep. No more than 20 minutes had passed and the crew turned all the lights on at full brightness and started the snack service wich consisted of an alfajor and a choice of hot and cold beverages. I got some water, didn't eat the alfajor and continued trying to sleep. 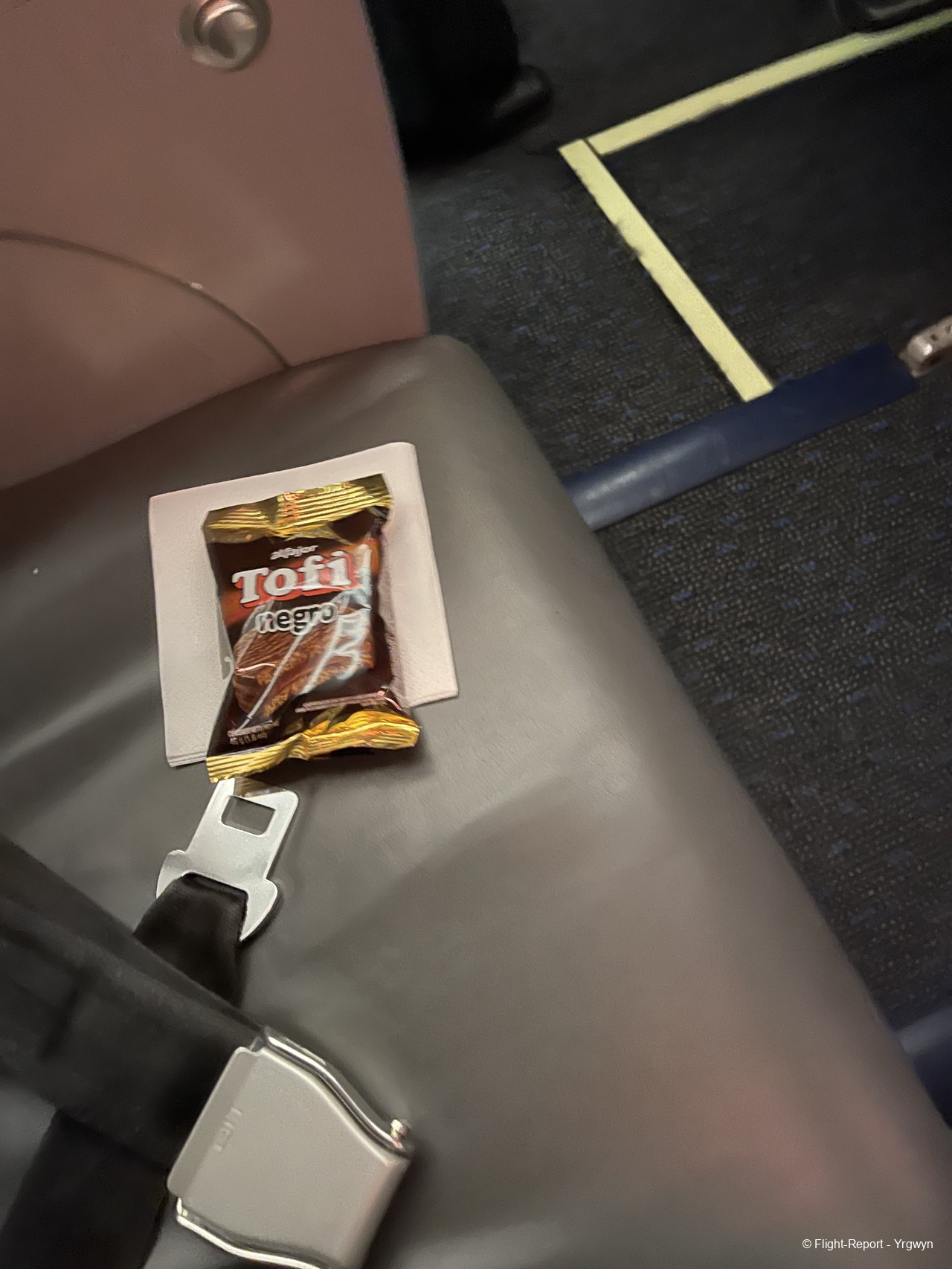 Some 30 minutes after the service endend, we started our descent into Bariloche - Teniente Candelaria Intl. Airport (BRC/SAZS). The approach was very boring as it was still pitch black outside and we were flying over a desert. Landing took almost everyone by surprise as we landed runway 29, which faces the desert and has not a single village or road to be seen on its approach path. 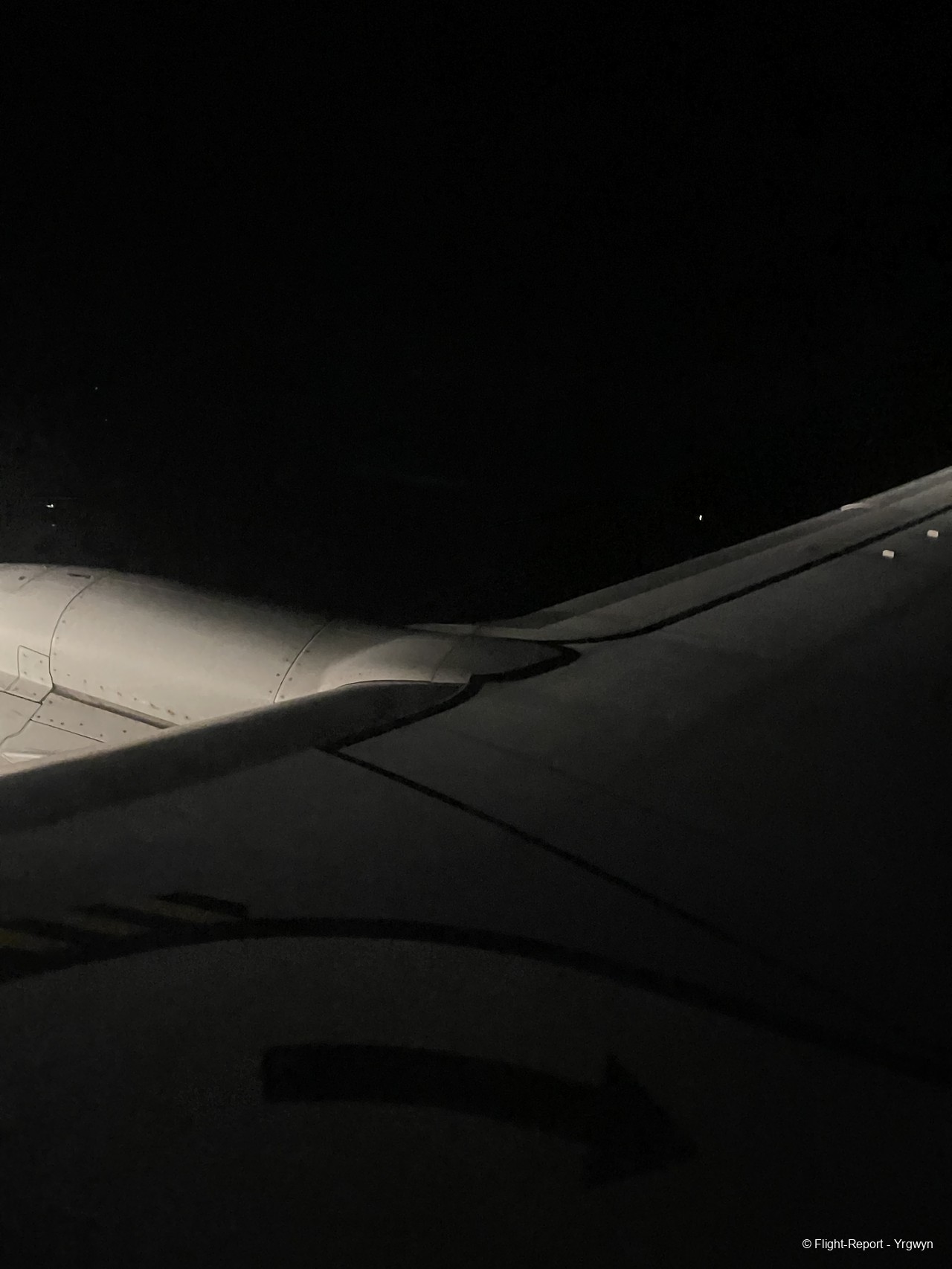 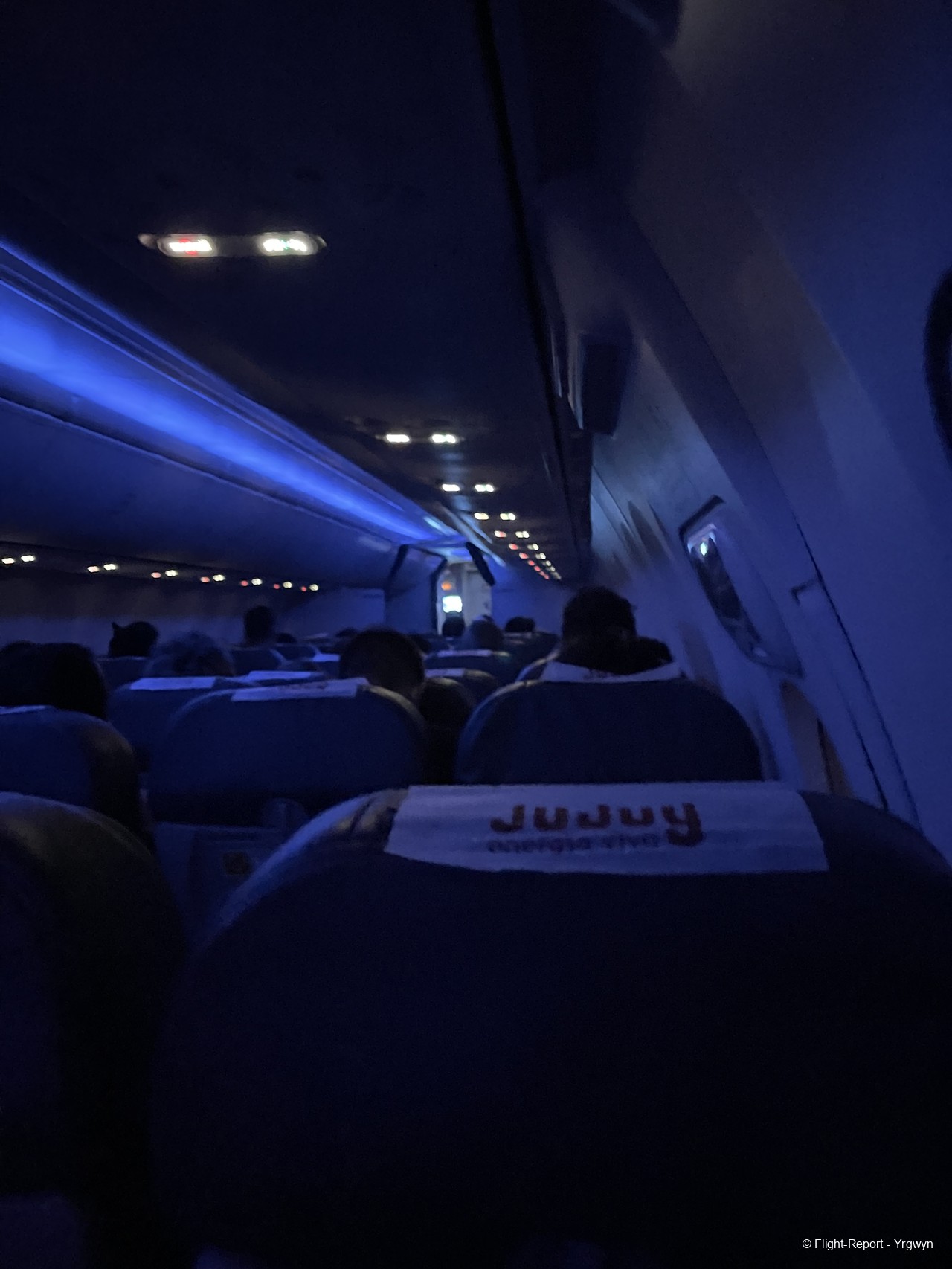 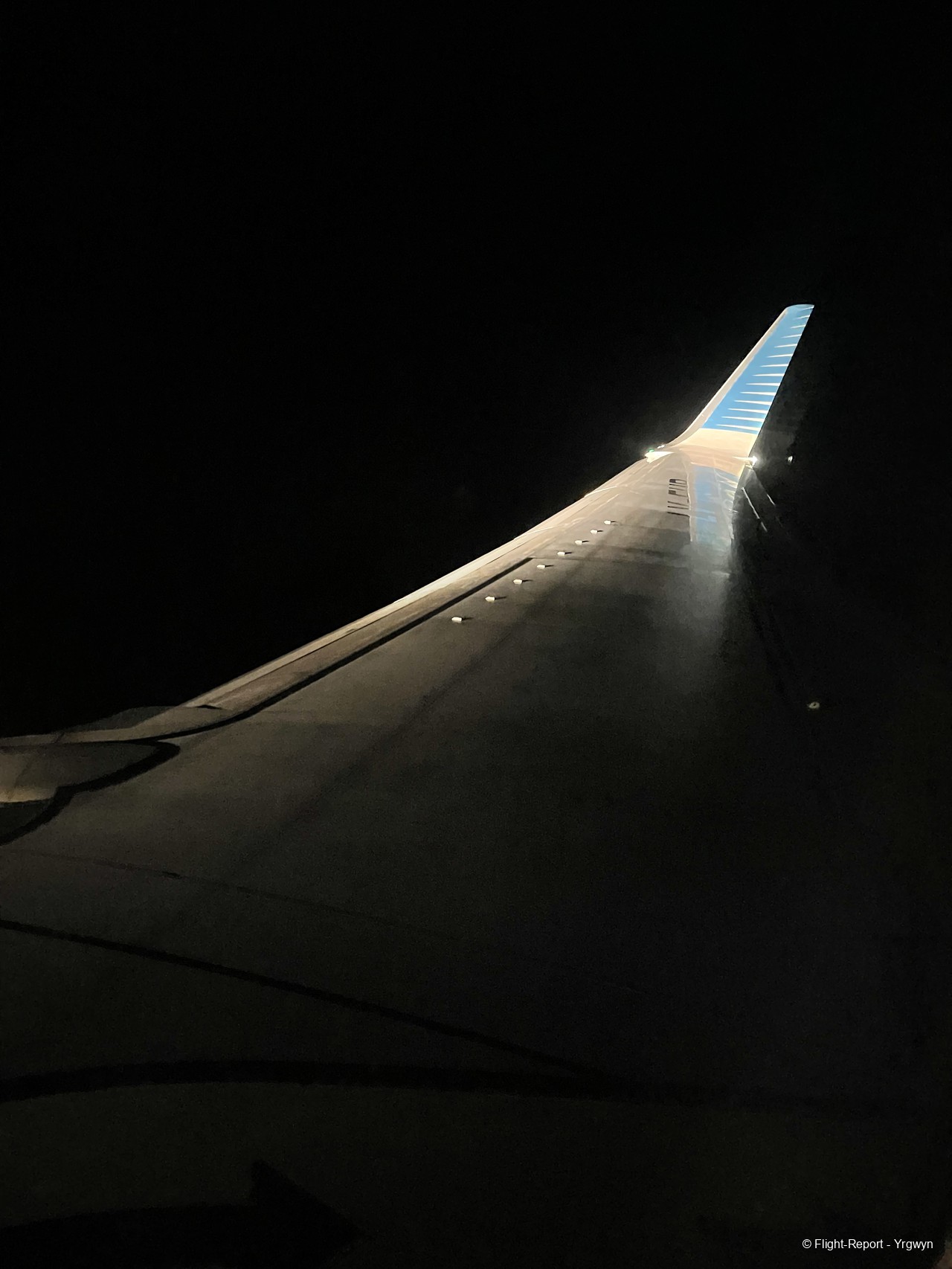 Touchdown was average and the plane braked heavily in order to make it to the exit and prevent a backtrack. We deplaned through a jetway. Baggage claim was fast and we had to clear a so called "Control Fitozoosanitario", where they only scanned backpacks and nothing else. Not the most impenetrable control. As I left the terminal, a beautiful sunrise welcomed me to Bariloche. 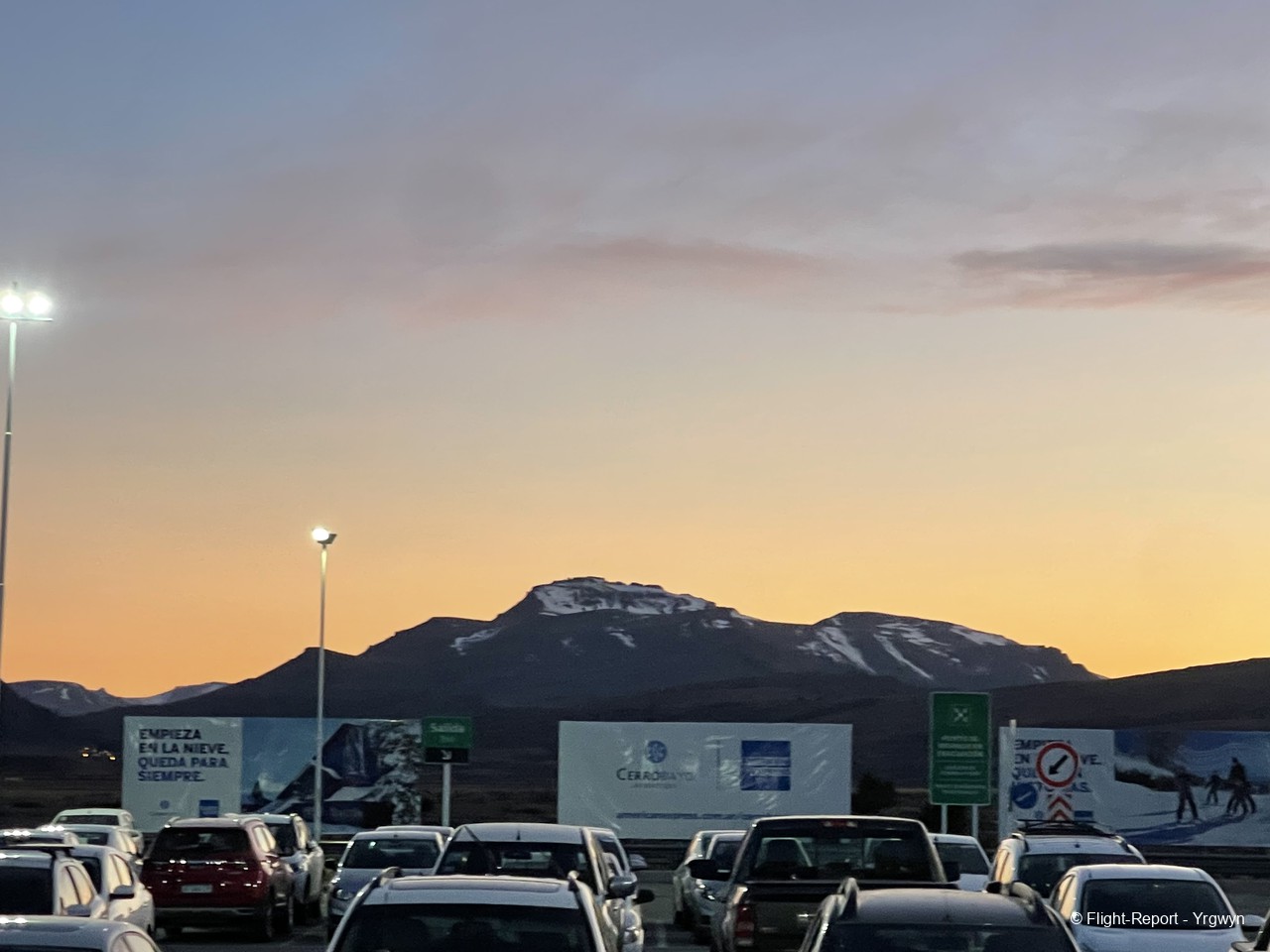 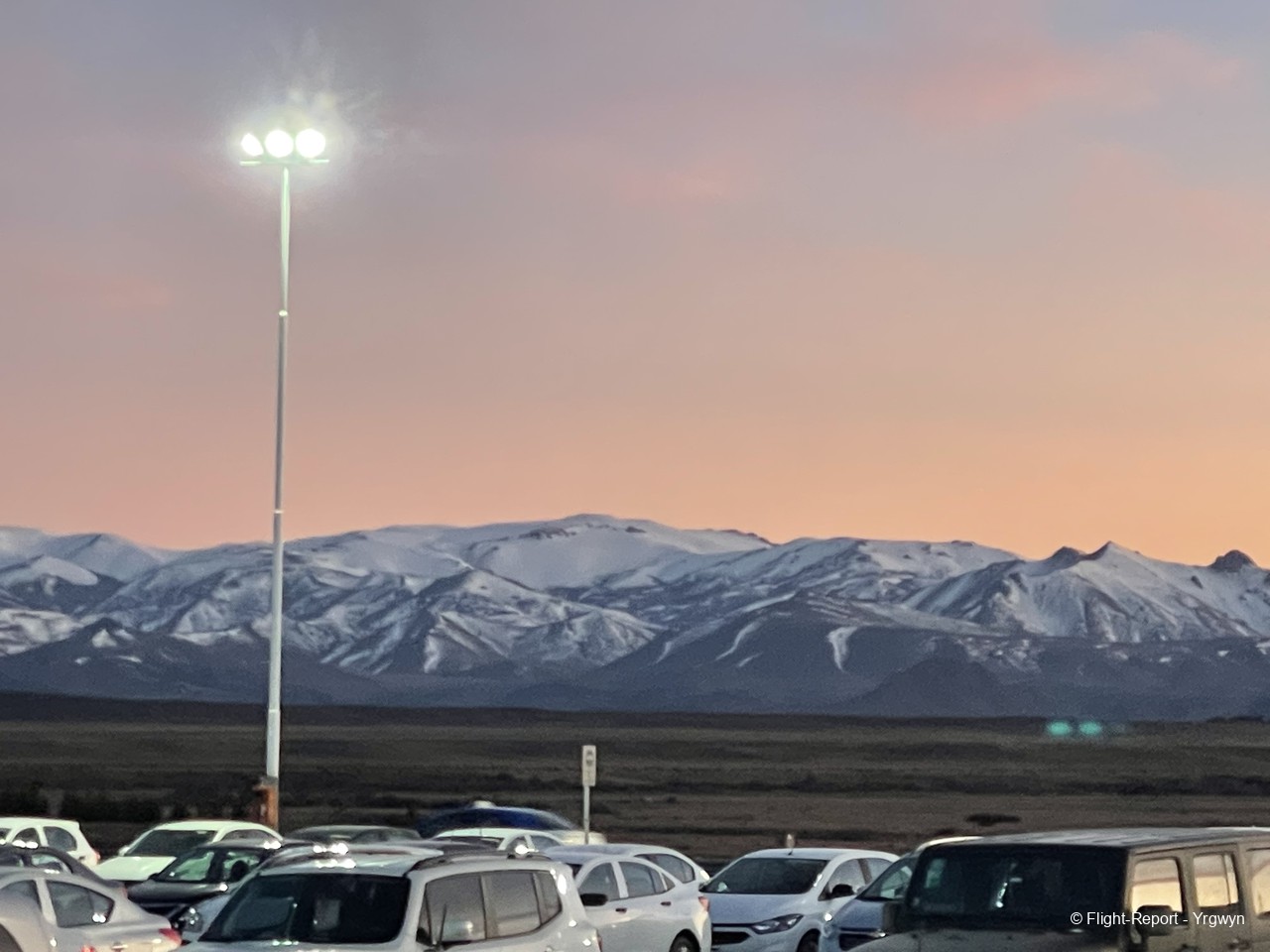 This is the end of the report. Thanks for reading! 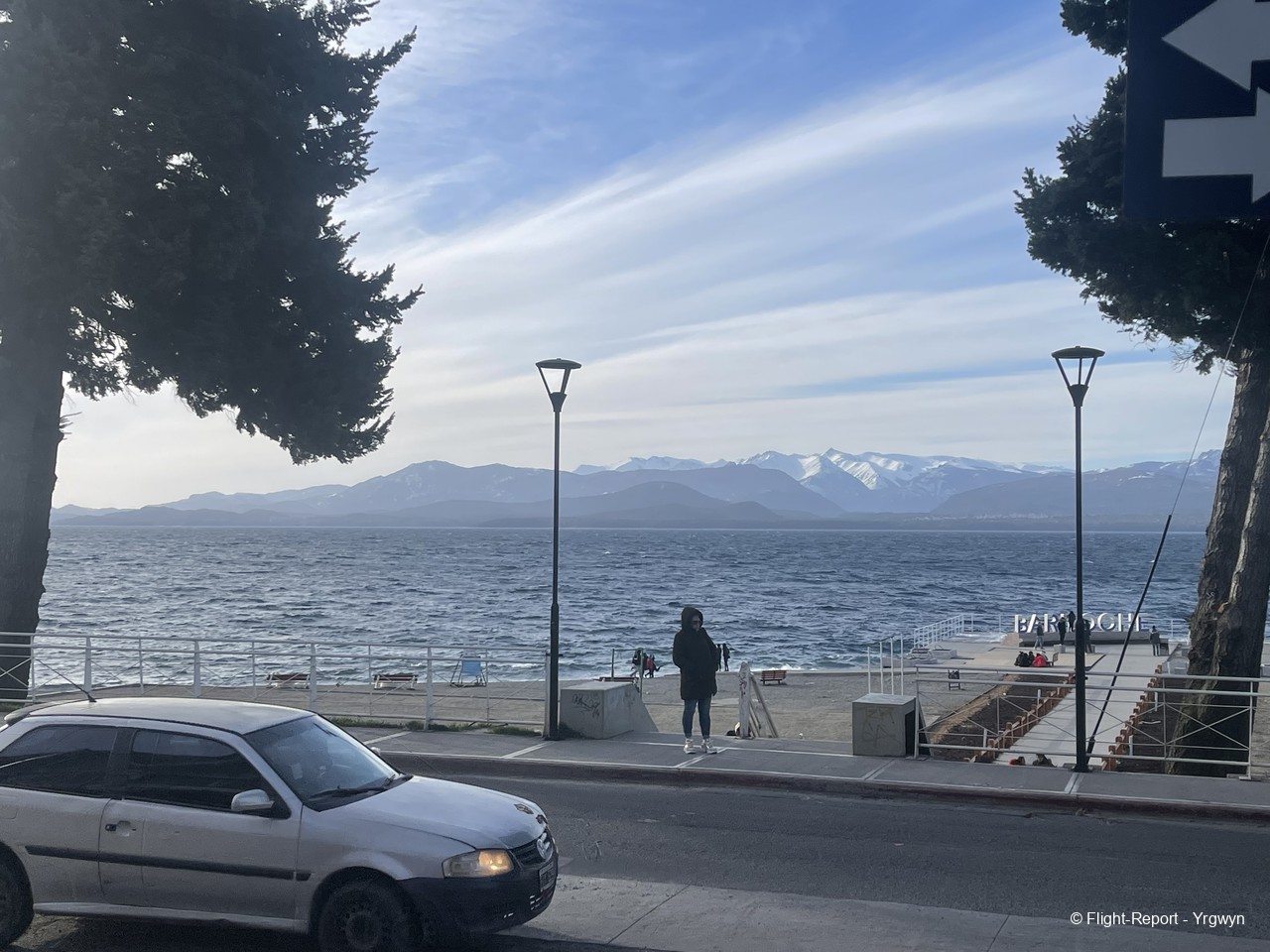 Bariloche is a beautiful place. It has some of the most stunning landscapes I've ever seen. The only problem I think it has is a lack of proper infrastructure: no motorways, too congested, very few public transport alternatives. But still, great place to spend at least a week, where you can go skiing, trekking, sightseeing, there's museums, shops, and great hotels.

HELP US ACHIEVE PEACE FOR UKRAINE

As in my previous FR, I think it is important that you know that Russia is still killing Ukrainians just for being Ukrainians. The only way to stop this is to ensure liberation for all the occupied villages, towns and cities - something already underway as we've been able to see in the last week, when the Armed Forces of Ukraine liberated upwards of 350 settlements and more than 10.000 square kilometres of land - in just 6 days!
If you wish to help the AFU continue defending Ukraine and liberating people from the horde of war criminals you can donate directly to them via United24: u24.gov.ua
You can also donate to the Come Back Alive charity - comebackalive.in.ua
"Never has the fate of so many dependend on so few"

AR's service was average and met my expectations. The plane wasn't clean but not nearly as dirty as in my previous FR. The crew wasn't friendly nor too helpful and only did its job. The seat was alright and flying on the emergency exit row was definitely a plus. I would choose AR over its competitors F0 and WJ just because they offer free emergency exit seats and a generous baggage policy.

The airline with the best average rating is LATAM with 7.1/10.

The average flight time is 2 hours and 14 minutes.

He wrote 6 reviews about 1 airlines and 6 airports.