By marathon GOLD 2395
Published on 11th July 2014
This is the last leg of this trip to Japan's islands closest to Taiwan; I added a tourist bonus on Hualien to the original version in French.

Going up to the Departures level, taking the stairs this time.

A look to the terminal, which was completely empty at that time.

And arrival at the check-in counter which is not crowded, because most passengers who flew with me from ISG had to retrieve their checked luggage first (delivery was going to be quite fast). 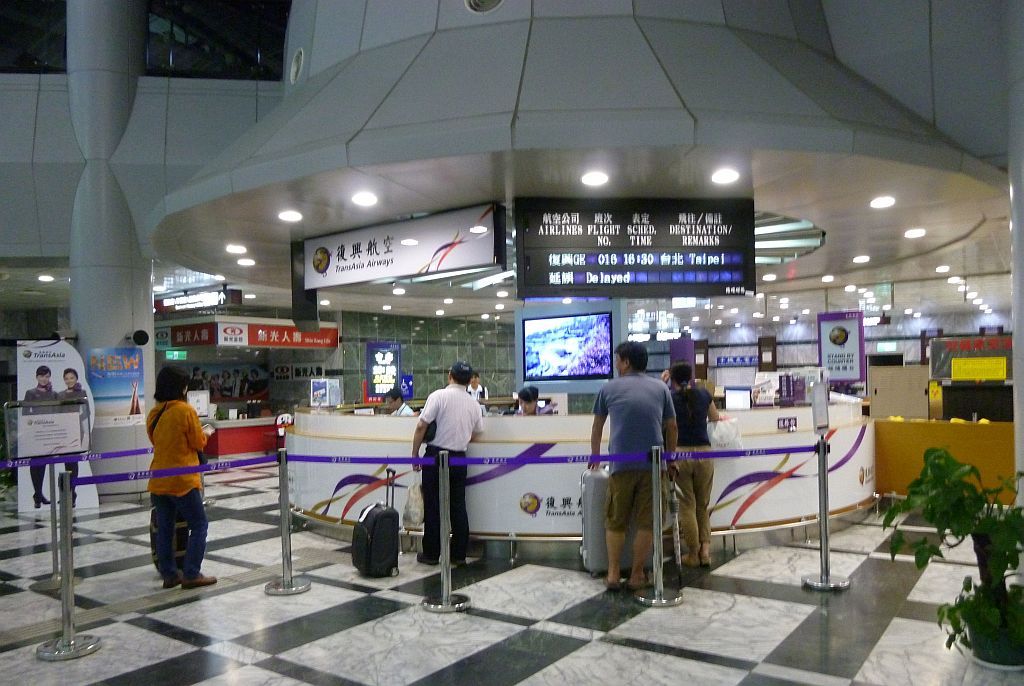 A small surprise: flight GE016 is displayed late… taking as a reference an impossible 16:30 ETD, which is approximately the time when this plane took off from HUN on the way to ISG. Flight GE016 is actually a regular flight displayed on GE's website, and its daily ETD is 20:30. 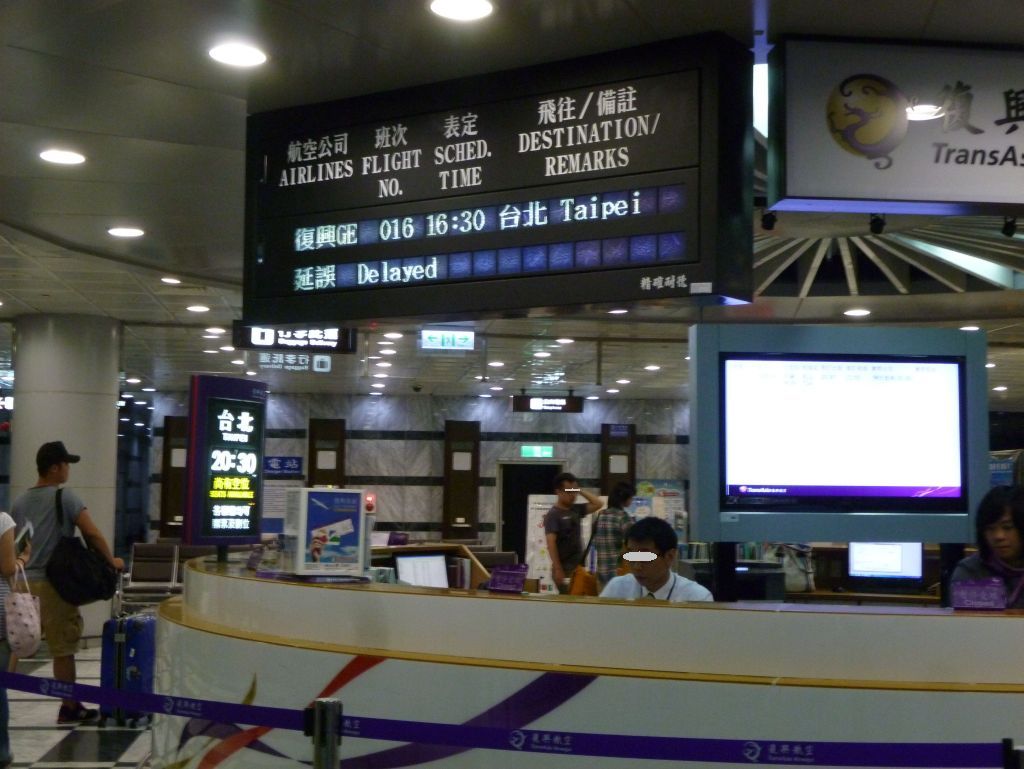 All the clocks are on time on the FIDS (the Chinese and Taiwanese often forget about daily savings time in the West), but there is the same error about our flight: this flight will take off 4 hours later than an ETD which is erroneously set 4 hours too early.

Anyway, I receive this BP, which is again pre-assigned.

The flight was not full (but not far from being full), but I thought it was useless to ask for an exchange for such a short flight by night, especially since that aisle seat is on the side I wanted, i.e. on the right 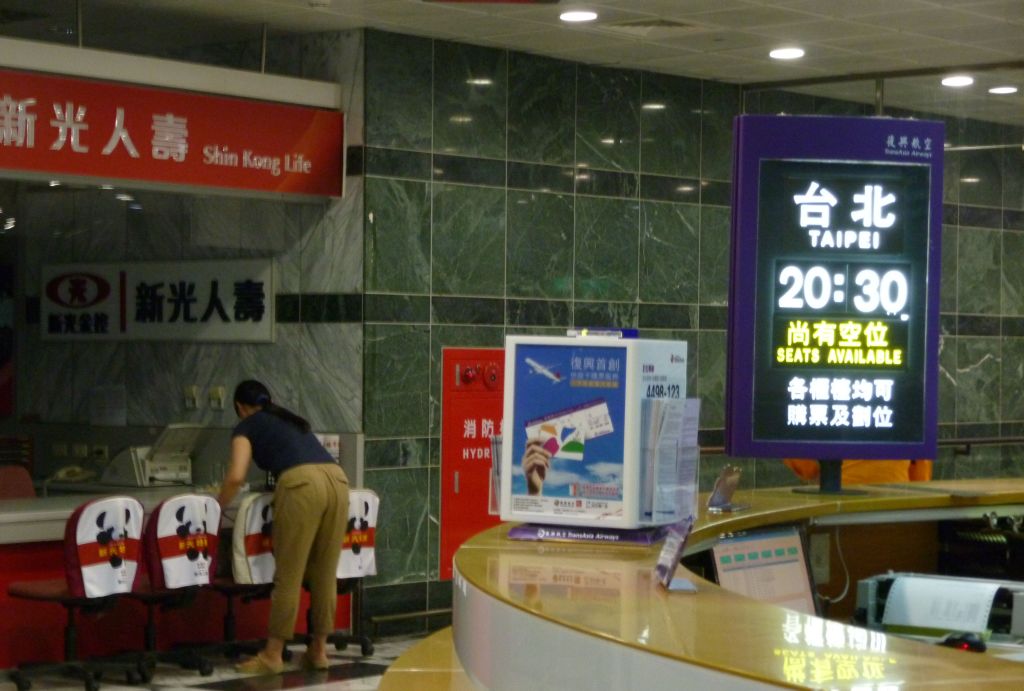 Since I am ahead of the other passengers, I visit again the airport. The door of the nursing room is still open, which provides me an opportunity to take a better picture of the place. 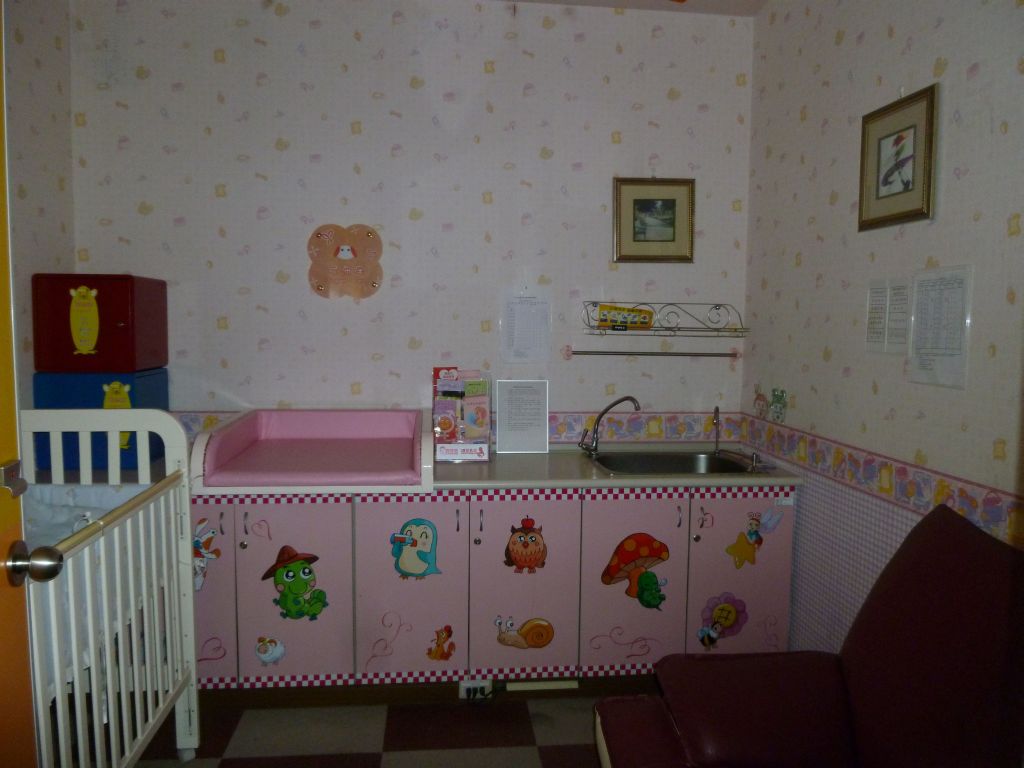 The toilets did not change 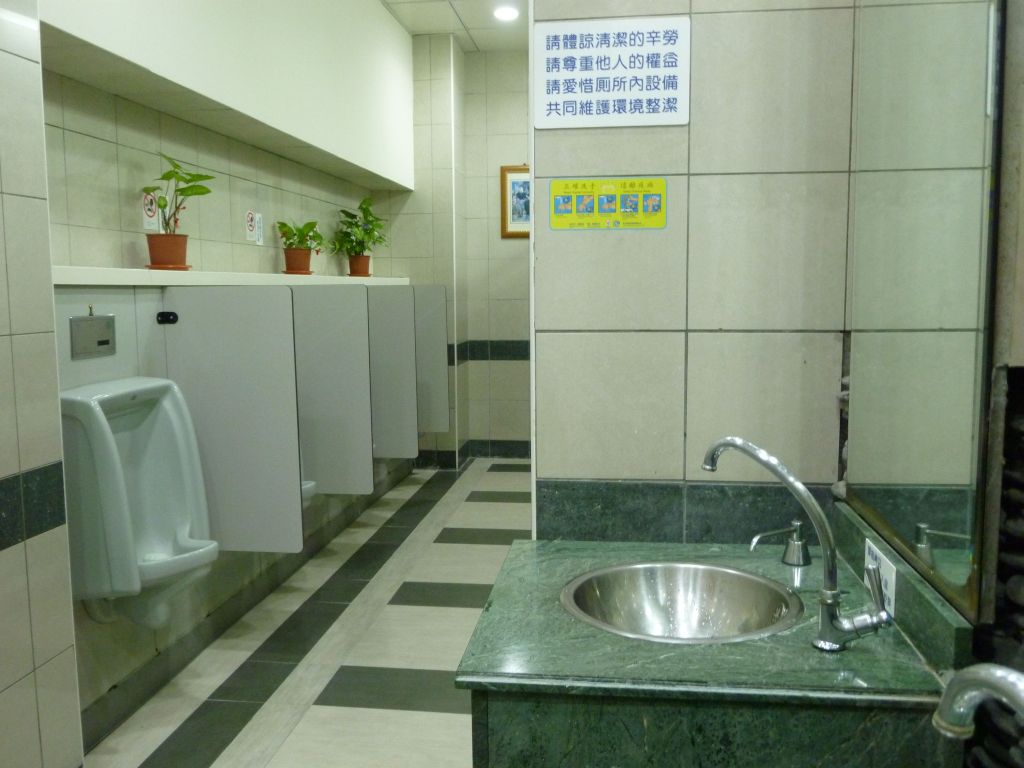 There is no relationship between the two signs next to the plants: a classical do not drink and drive, which is quite unexpected at the Departure level (no, it was not do not drink and fly for the pilots), and in blue Come closer to avoid splashing on the side. 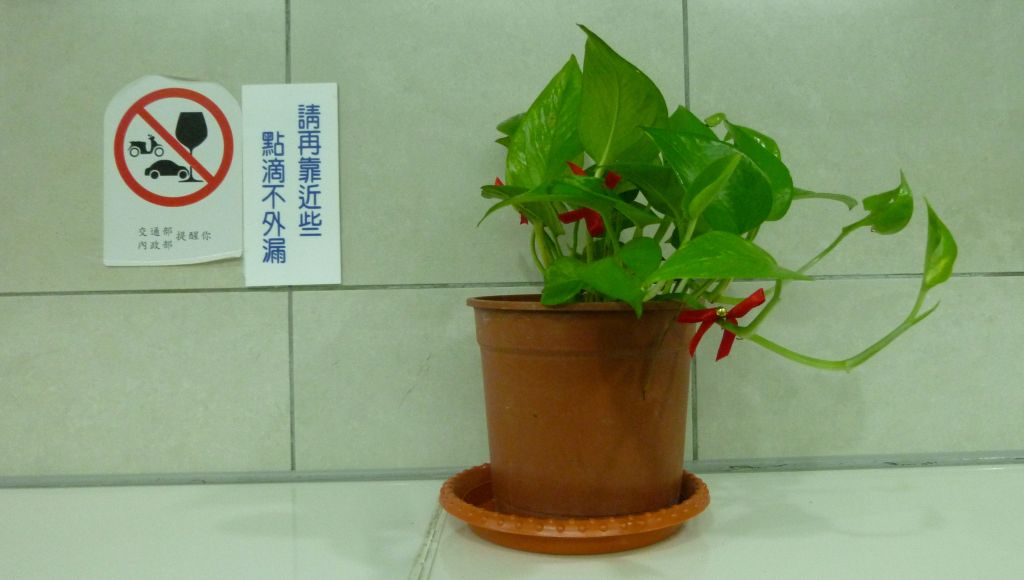 After this limited visit of the landside facilities, it was time to go airside; there was a limited queue. 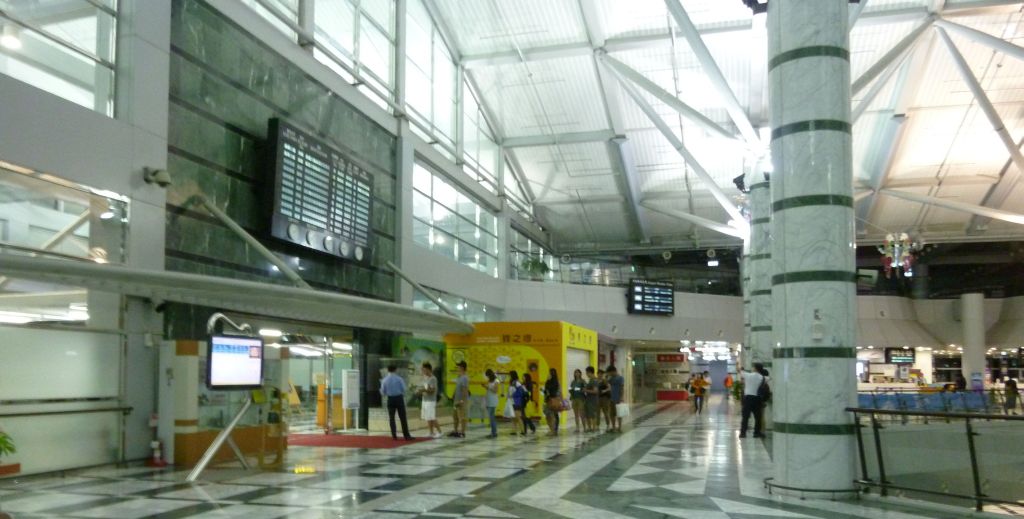 Nothing special about the BP and security check. If you read me carefully, you realized that my hand luggage was X-rayed at ISG, then entirely searched by hand by Japanese Customs, then X rayed by Taiwanese Customs at HUN, then X rayed at HUN's security checkpoint. And also the same in reverse orders on the way in. They were trying hard to catch smugglers…

The decoration of the boarding gates are reminiscent of the huts of the Atayal, the local Aboriginal tribe, and one the largest in Taiwan. 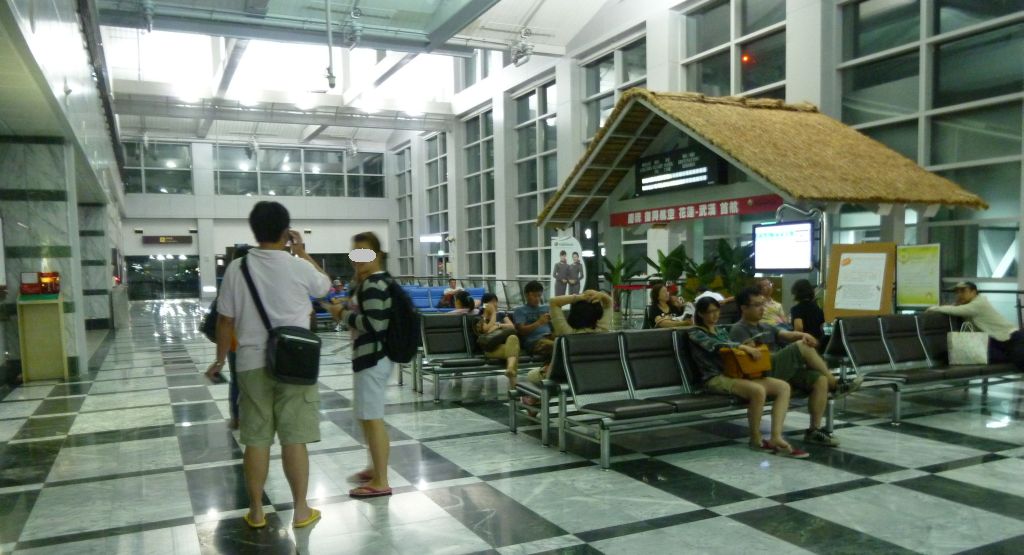 Again the same erroneous schedule (at least, there is coherence in the information), with some useless weather information, since we did know that it was raining in Hualien, and that the flights to Taichung or Taitung had left hours before.

There was also a free wifi access, but it had the worst throughput I had ever had for ages. I only managed to have half of the image of the cover FR of the home page before it was time to board. Boarding was announced in Mandarin, Taiwanese, Hakka, English and Japanese. Five different languages! How many airports provide that many? 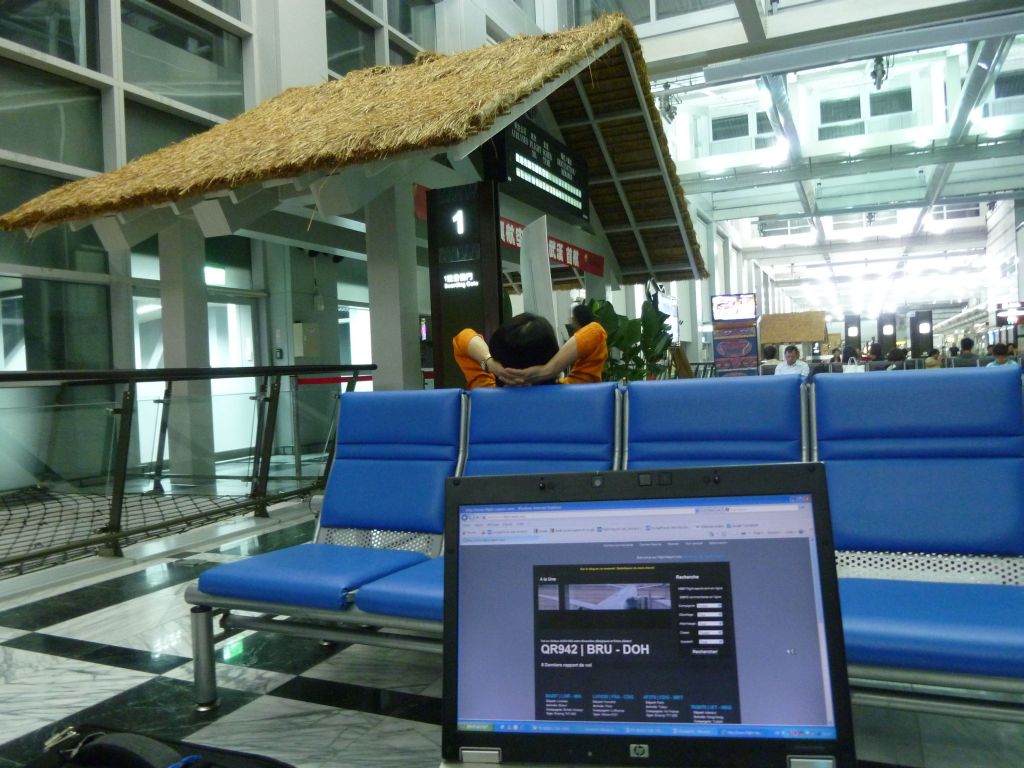 Always the same umbrellas for passenger use on the way to the plane.

A closer look at the aircraft

In order to add some flesh to this FR, I exceptionally studied the on flight sales magazine. There were the usual jewelry, perfume, wine, some 540 TWD plane models… but two unusual trinkets attracted my attention, if not that of my credit card.

A bracelet and a necklace containing 99.99% pure Japanese germanium for the former, and 1100 Gauss health magnetic powder: would you have been interested by these items? I was not. In my childhood, they used germanium for power electronics, and for optoelectronics nowadays, it never had a chance to eliminate the free radicals from anybody's body, but at least it was harmless. On the other hand, 1100 Gauss (= 0.11 Tesla) is the threshold above which researchers detected anomalies in the electrocardiogram of the macaque apes in magnetic fields of that strength. Rats show signs of intense stress above a few Tesla. If you put this thing in your pocket, your spermatogenesis could take a blow, too. Sure, MRI machines use these levels too, but you do not spend your life in them. These side effects were not in the bilingual description, but in my technical culture which is regularly irritated by this kind of pseudo-scientific nonsense.

This time, the drink was distributed during the flight. The FAs were efficient in order to come down the aisle inside the 35 minute flight. I did not have the impression that taking that flight was such an exhausting flight, and was intrigued that they provide this energy drink. I do not question this relevance of replenishing your minerals during and after a marathon, but in this case, it looked more like a promotional batch which saved GE some small change. 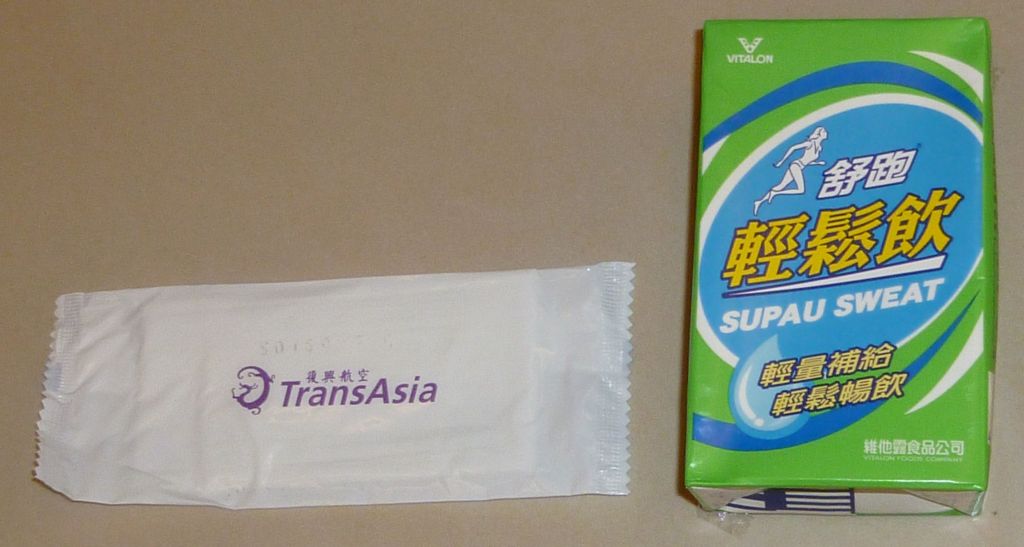 The FAs had exchanged seats compared to the previous flight: I was closer to the one using the front jumpseat before, but she was really not smiling. I did not blame her: she had the bloated sinuses of somebody fighting a bad sinusitis, and flying was certainly painful in such a condition.

When landing in TSA, a seat on the right hand side of the aircraft is the guarantee of the wonderful view of Taipei's center at night, which I would never get tired of. Smooth landing, and taxiing to the immediate vicinity of the airport. 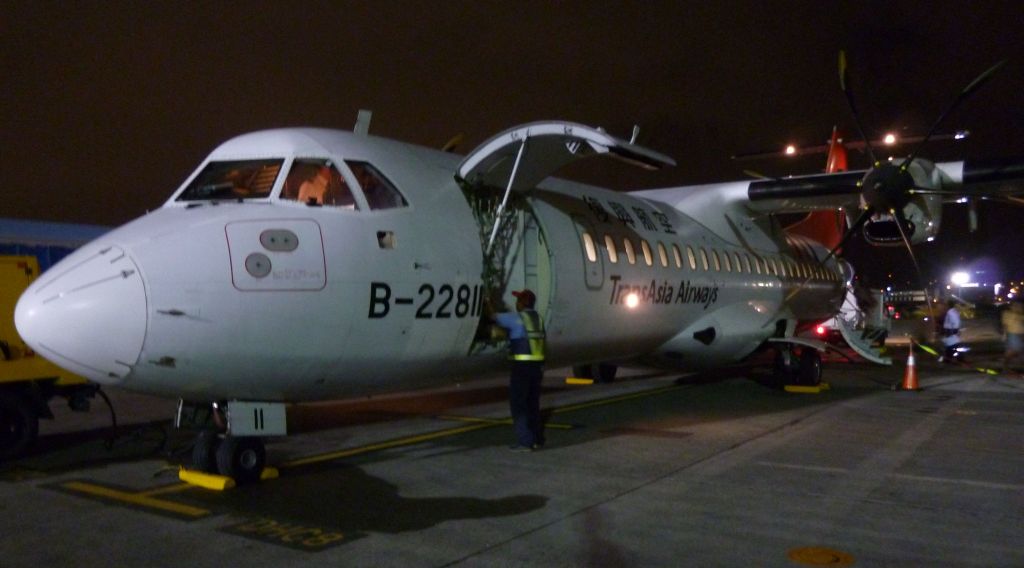 Since I had not checked luggage, I was immediately outside in front of the terminal. 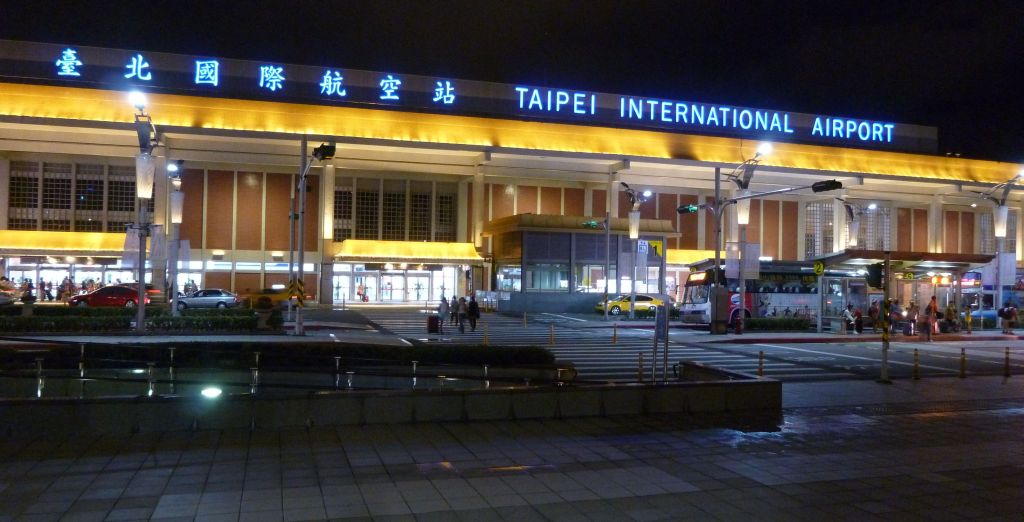 I had probably just missed a bus, for the next one was a quarter of an hour later, and I took the subway option. There was an FA from another GE flight who left at the first station. She was really close to her daily work place.

I did not stop in Hualien that time, but Hualien is more than a convenient gateway to the Gorges of Taroko. Being exposed to the storms of the Pacific Ocean does not help, but on some days, it is a small sleepy sun drenched city which feels like an oversized resort. These are a few pictures from another trip to Hualien.

What do these visitors collect in this ten inch deep pool? Small shells, which they then have cooked for them for lunch in this park unlike any other I saw elsewhere.

If you are more into boating, consider Liyu Lake, a 260 acre lake south of Hualien, just outside the urban area. A two seater paddle boats will cost you 300 TWD for a half hour, double that for the four seater version.

There are faster (and more expensive) boats too

The tall trees behind the souvenir shops lining the road alongside the west bank are arecas, which provide so called betel nuts.

Betel nuts are both a billion USD business in Taiwan alone and a serious medical issue, since this mildly stimulant is carcinogenic. The plantations are also not devoid of adverse effects on the environment.

Betel nuts are consumed mostly by blue collar workers, who buy them from 檳榔西施 betel nut beauties, the nickname of the girls who sell them from booths with garish neon lights along the roads. There never was any sex trade involved, but they used to be extremely scantily clothed to attract customers. Do not be fooled by the pictures that you can find on the internet, though: revealing or missing clothing was banned some ten years ago, and all what remains are suggestive posters, like here on the north coast of Taiwan.

Back to Hualien : does the outside of Ji'an Chinxiu Temple remind you of something?

This is an example of the Japanese colonial heritage in Taiwan

This area was home to one of the largest concentrations of Japanese immigrants in Taiwan, for whom this temple was built in 1917. This statue of Kannon 観音 (Guanyin 觀音 in Mandarin), the bodhisattva of compassion, is typically Japanese – the Taiwanese representation is different.

This fountain where worshippers cleanse their hands and mouth also belongs to Japanese traditions.

As I mentioned in another FR, Hualien is also the home of the Tzu Chi, a very large Buddhist charity which has spread in the Far East and beyond. This is the oversized Hall of Silent Thoughts.

The Christians are a small minority in Taiwan, but the steeples make it easy to spot the churches. Some Christians also make sure that they are identified as such: see the sign above the cell phone number of this taxi driver, a very pleasant lady who drove me around that day in Hualien.

Thanks for reading this report (and maybe the previous ones too) !
See more

A standard domestic flight, on time, with a lesser drink because of the short duration, and of course no entertainment to speak of.
There are no significant services (shops, internet access...) in HUN, an otherwise efficient and spot clean terminal.

The contributors of Flight-Report published 5 reviews of 2 airlines on the route Hualien (HUN) → Taipei City (TSA).

The average flight time is 0 hours and 36 minutes.