#36 out of 72 Airlines A minimum of 10 flight-reports within the past two years is required to appear in the rankings. 841 reviews

Welcome to the next installment in this series of Flights between Washington DC and Rodez, France. The point of this trip to Europe was to go to a big Flight-Report.com meet-up which coincided with the Le Bourget Paris Air show. I also took the opportunity to go see my parents in the Southwest of France. I worked out a somewhat complicated routing to stretch out the miles, and basically because I'm an AvGeek and the more flights the better, when you are not time constrained, that is.

Normally, when I go to my hometown in France, I do IAD-CDG-TLS and then drive 2 hours to Rodez, but that was getting a little boring. The ORY-RDZ flights will take me directly to my hometown; this was also the first time that this route had been reported on the site.

Here is the full routing.

Knowing that I had strung together an itinerary with 4 flights and a change of airport in Paris, the Air Traffic Controllers strike had me very worried. Imagine my HUGE relief when I got this e-mail from Air France a few minutes before my flight took off from JFK for FRA. So everything should be fine! Right? 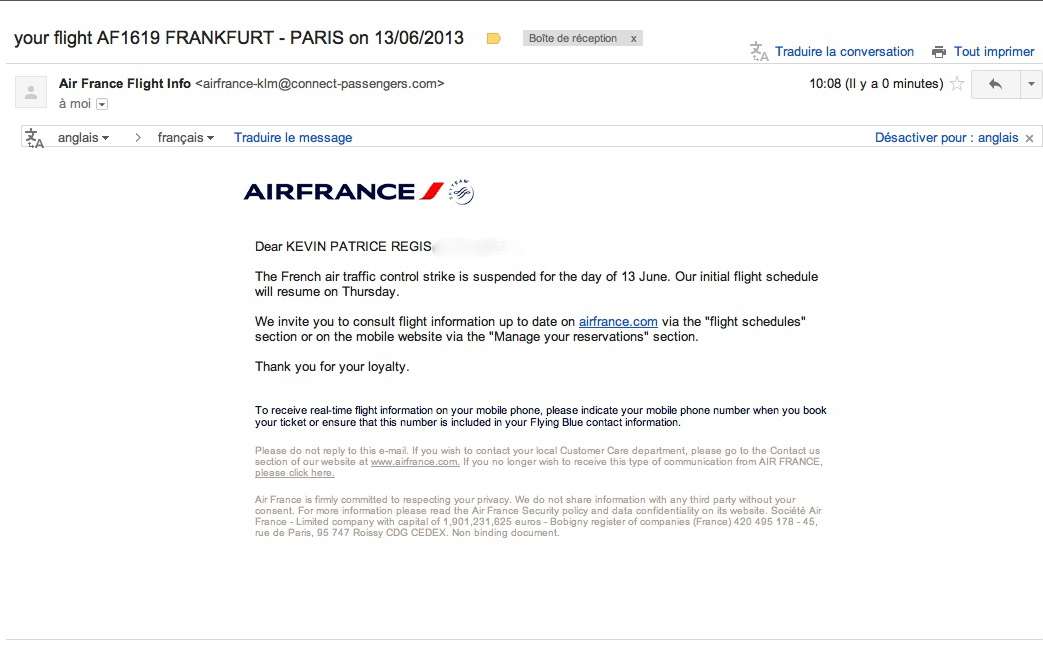 Yeah, not so much…
With the hour long delay on my FRA-CDG flight, things were not starting out well. When traffic is moving normally, getting from CDG to Orly Airport takes about an hour. I had originally booked 3 hours between flights so theoretically, I was still in good shape, even with the hour delay, but I ran like hell to get the next shuttle to ORY upon arrival.

Considering it was early afternoon, I was not expecting the traffic to be too bad–it wasn't even close to rush hour. But the traffic was terrible, we were at a crawl almost the entire way from CDG to ORY. According to the coach driver there was a SNCF (French National Railway) strike. Seriously? My flight is delayed because of an ATC strike, and now I'm stuck in traffic because of another strike. As a French expat these incessant strikes really make me embarrassed for the image that France gives to visitors. In fact, while I was at the Sky Club at JFK, businessmen were complaining to an agent about a cancelled flight This is rediculous, the French are always on strike, someone should just tell us ahead of time when they are NOT on strike and that it is safe to enter the country. I really hate hearing such things about my birth country and I understand how frustrating it can be.

Anyway, I digress…
I ended up getting to ORY at 4:30PM…it had taken me a full two hours to get between CDG and ORY, which is just nuts. It was so frustrating because I had just barely missed my flight. I went straight away to the Air France connecting flights counter after seeing on the FIDS screen that my flight had departed. I was a bit worried that the next flight may be full and not have room for rebooking, but the efficient and charming agent changed my flight in less than 5 minutes and I was all set with a Boarding pass for my next flight. What a relief! 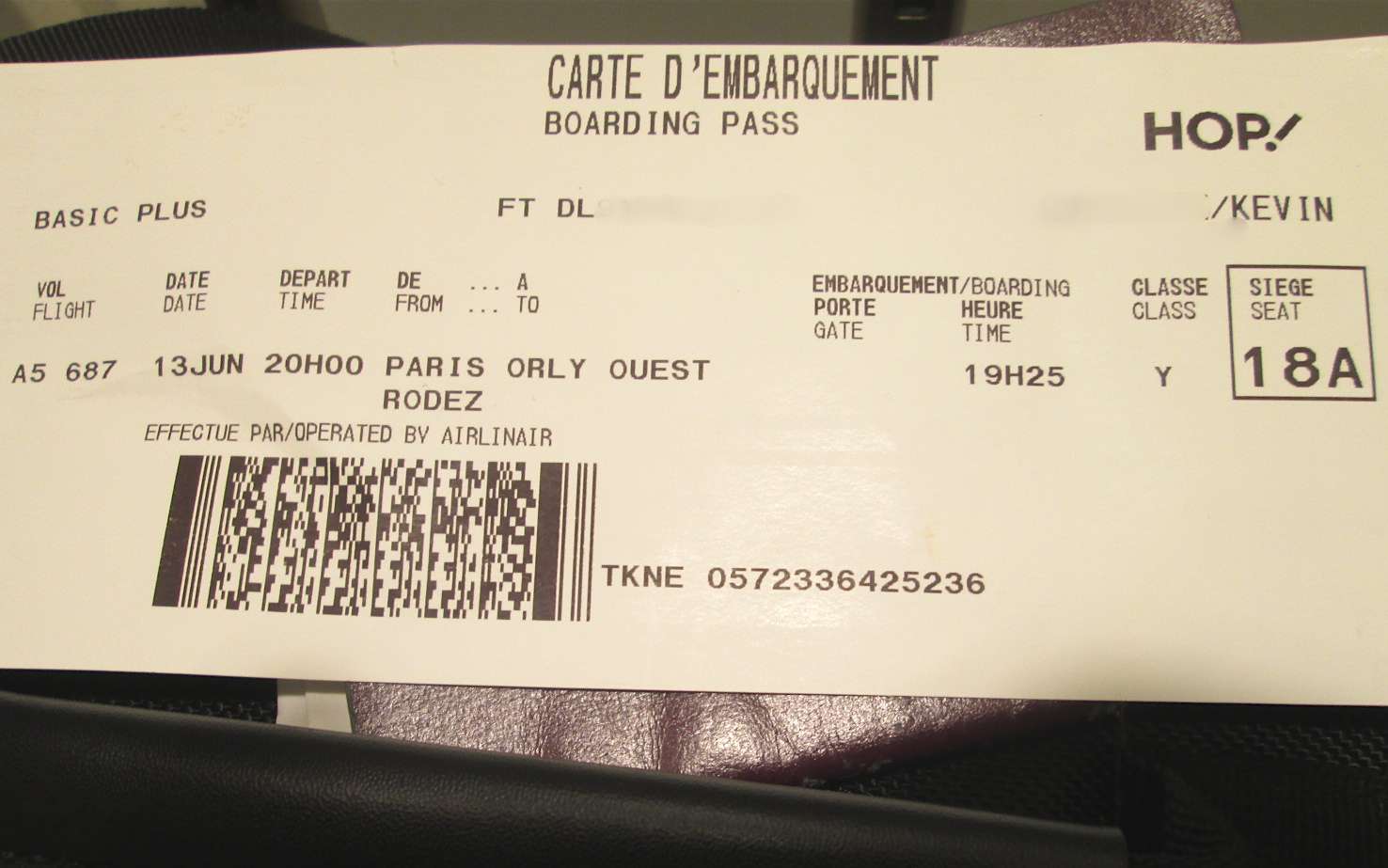 Hmmmm….so now the only question is, what am I going to do for 3 hours? My good friend and Flight-Report member KL651 had recommended I go to the observation deck in the other terminal. Great…I'll be able to get my AvGeek planespotting fix :-)

So I took the OrlyVal train between the two terminals and headed to the observation deck. 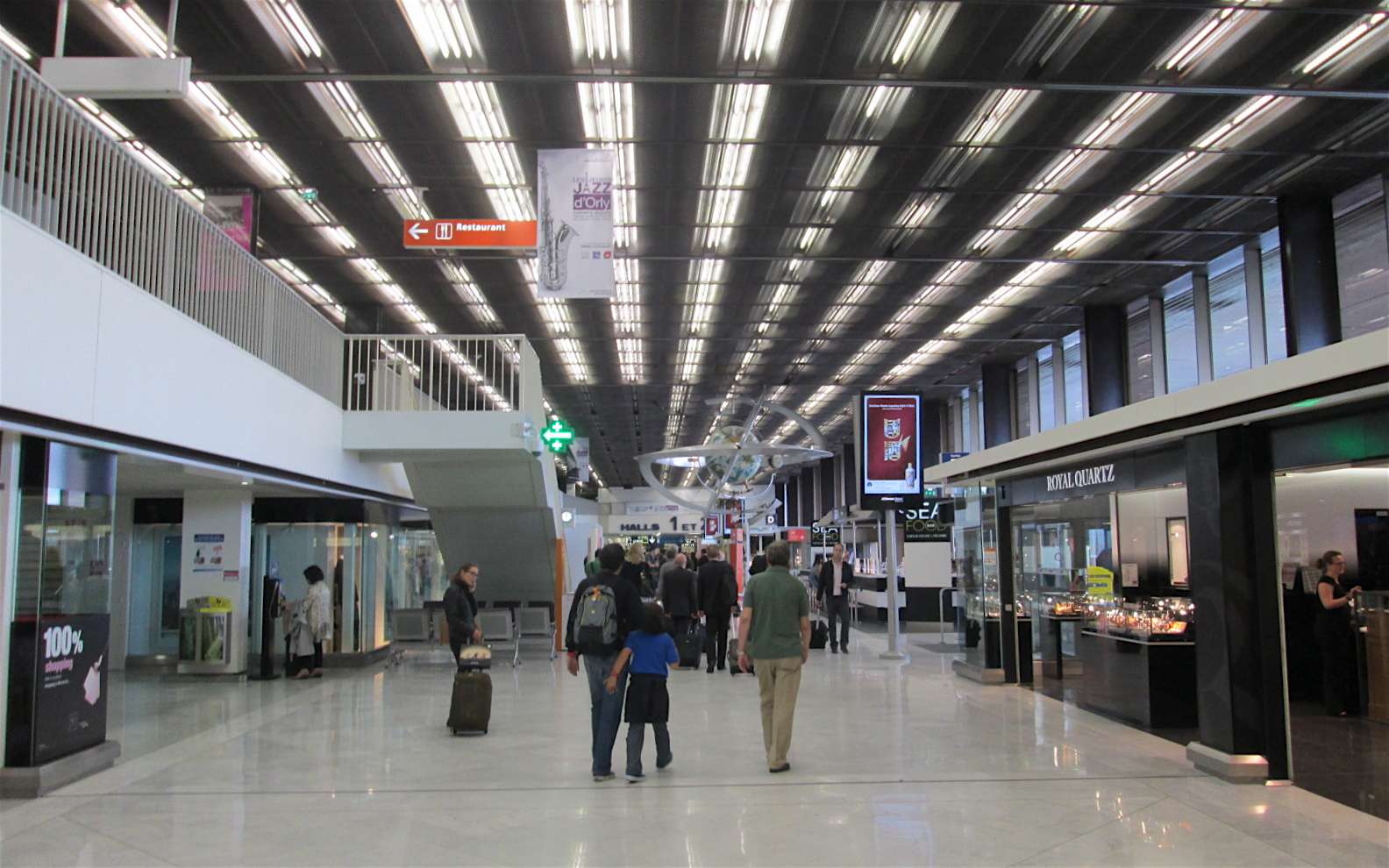 The weather had been rainy all day, but luckily the rain stopped just as I got outside. There isn't much traffic on the runways and the gray weather makes for less pretty lighting, but it helps pass the time. 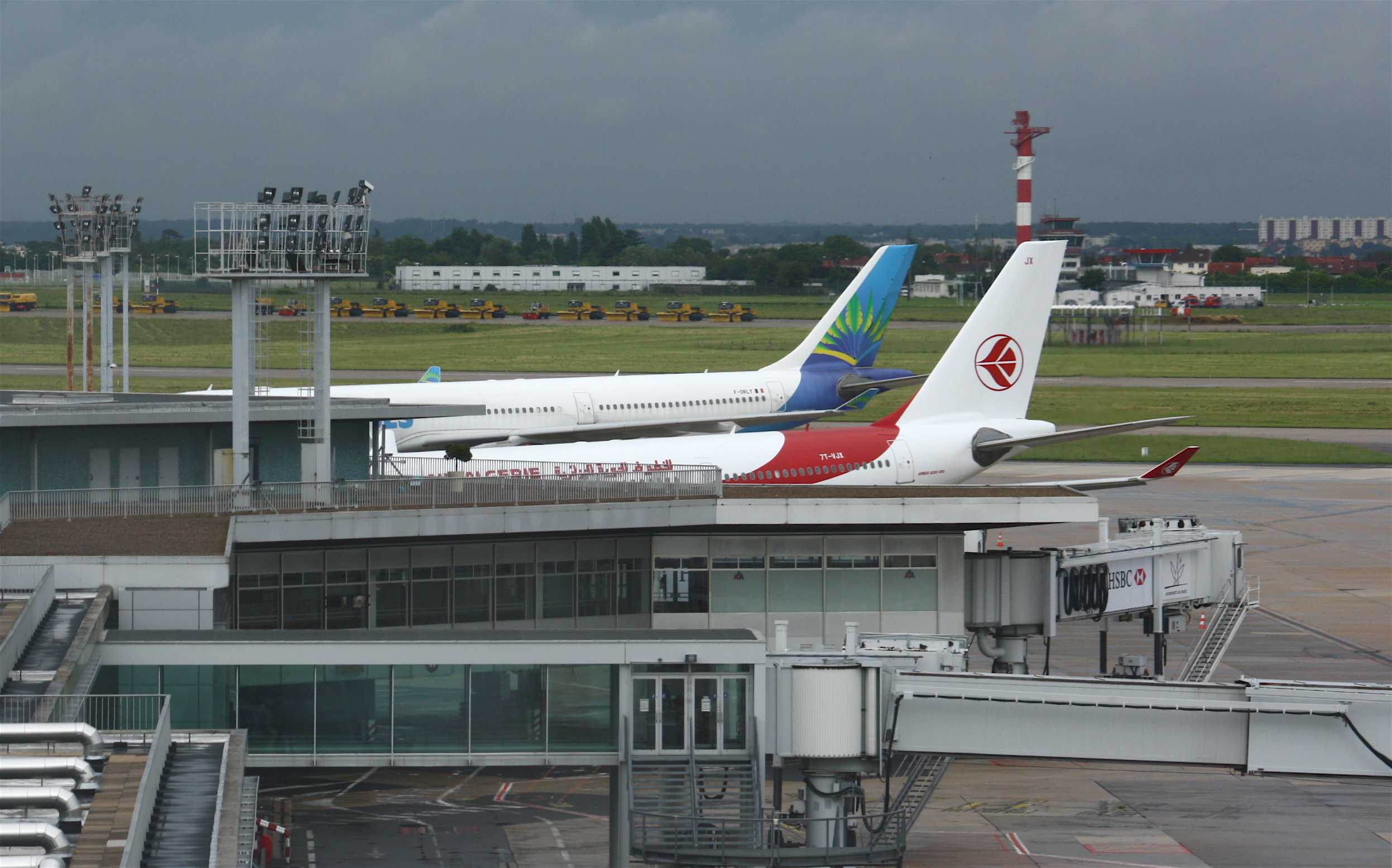 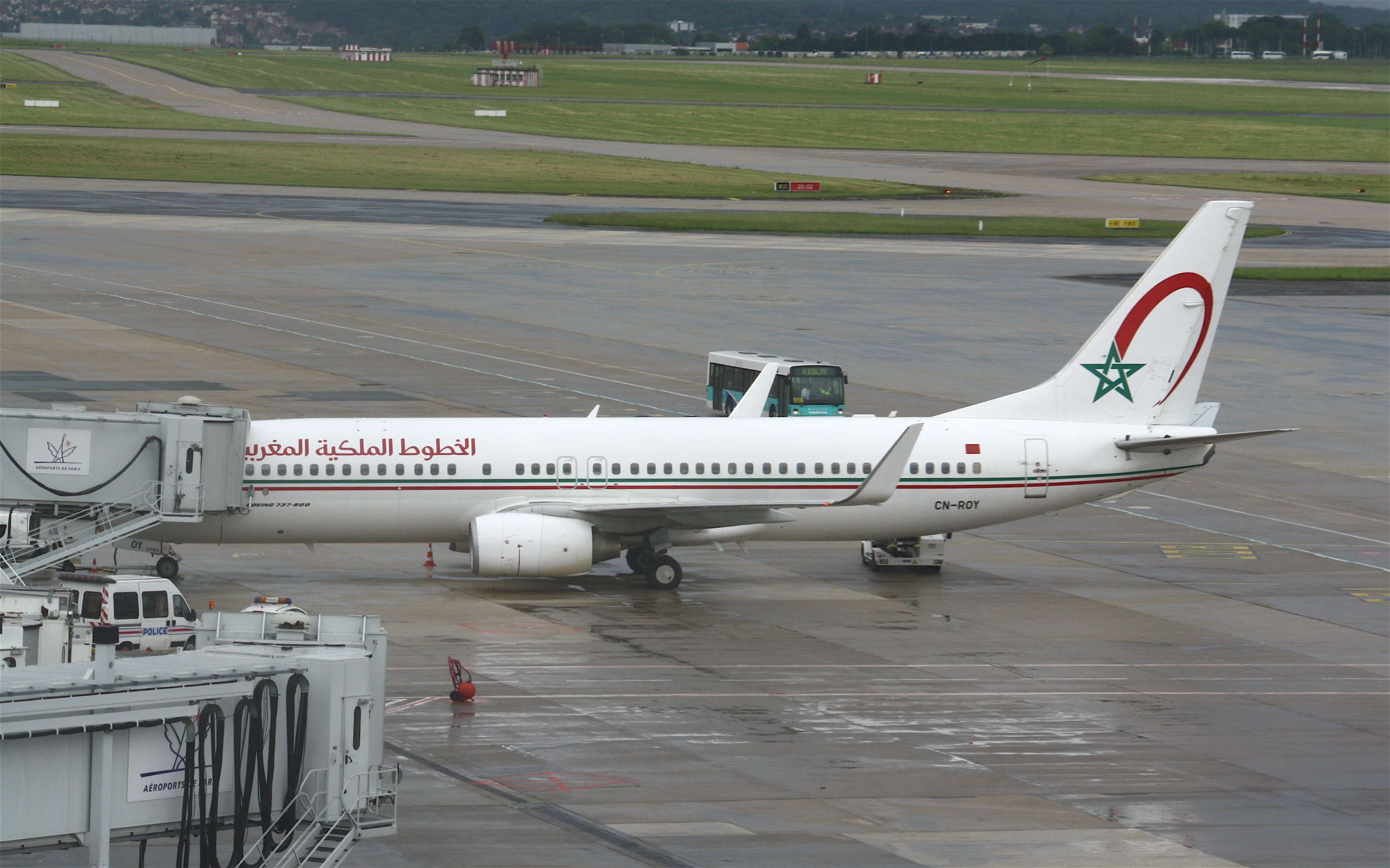 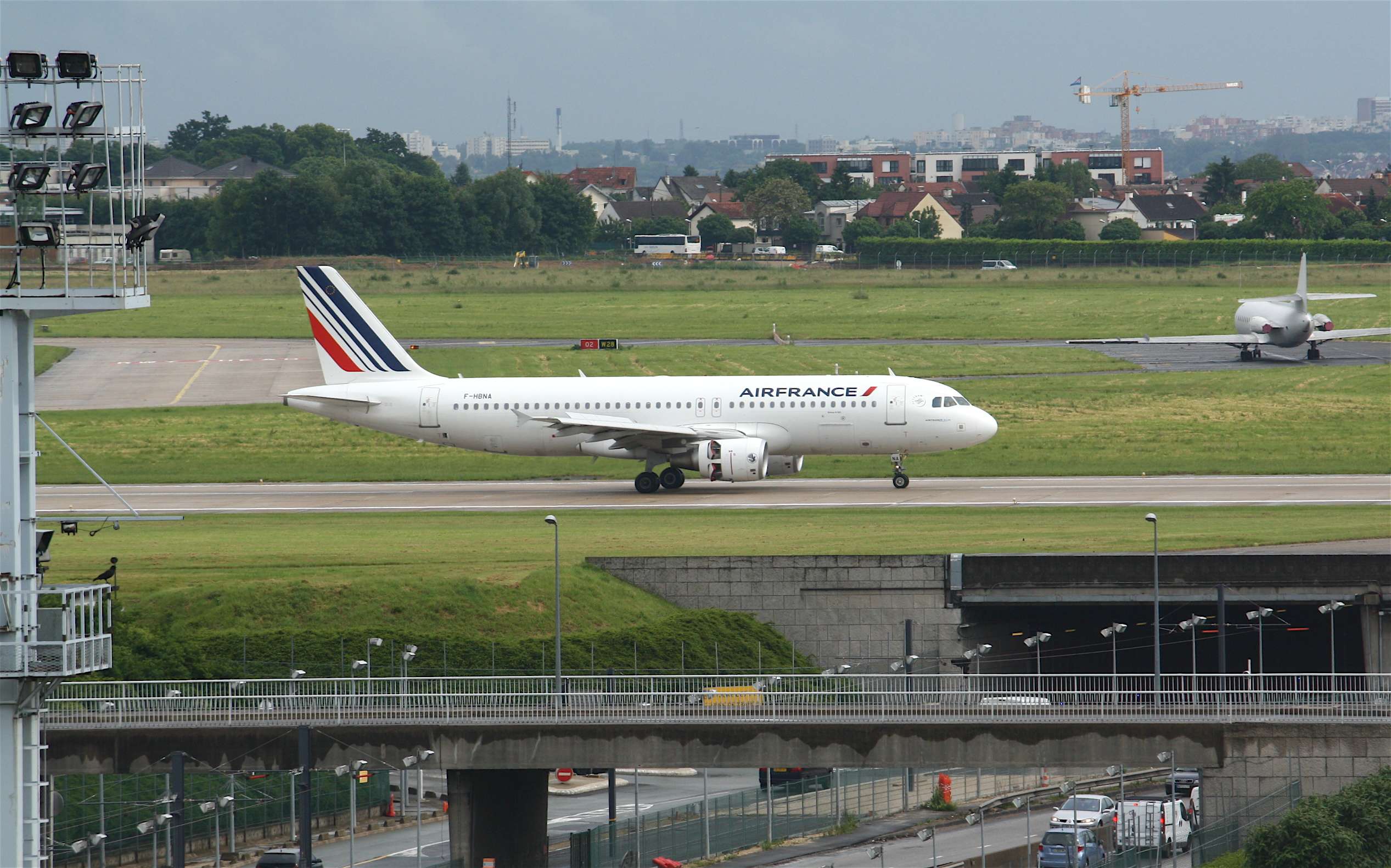 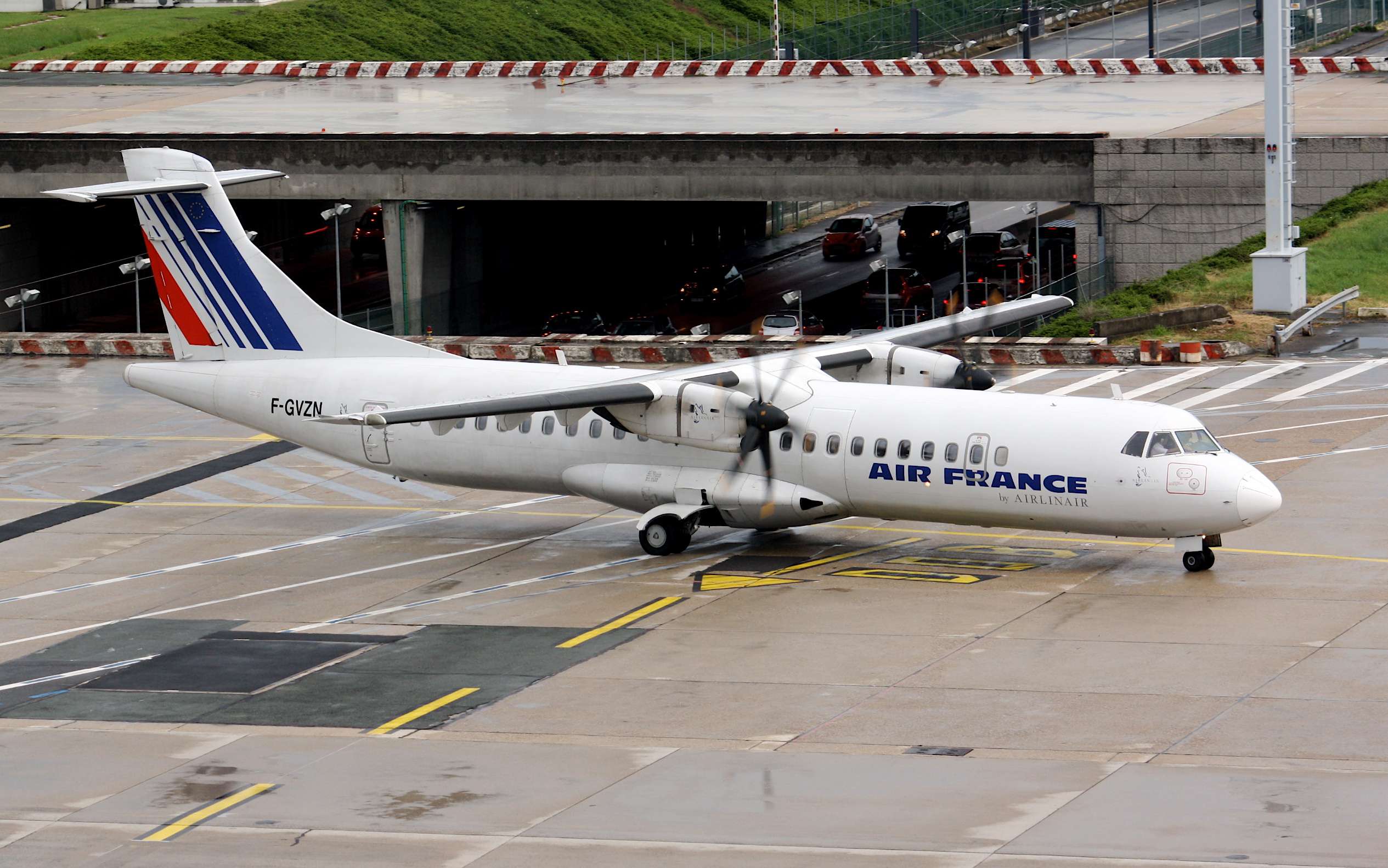 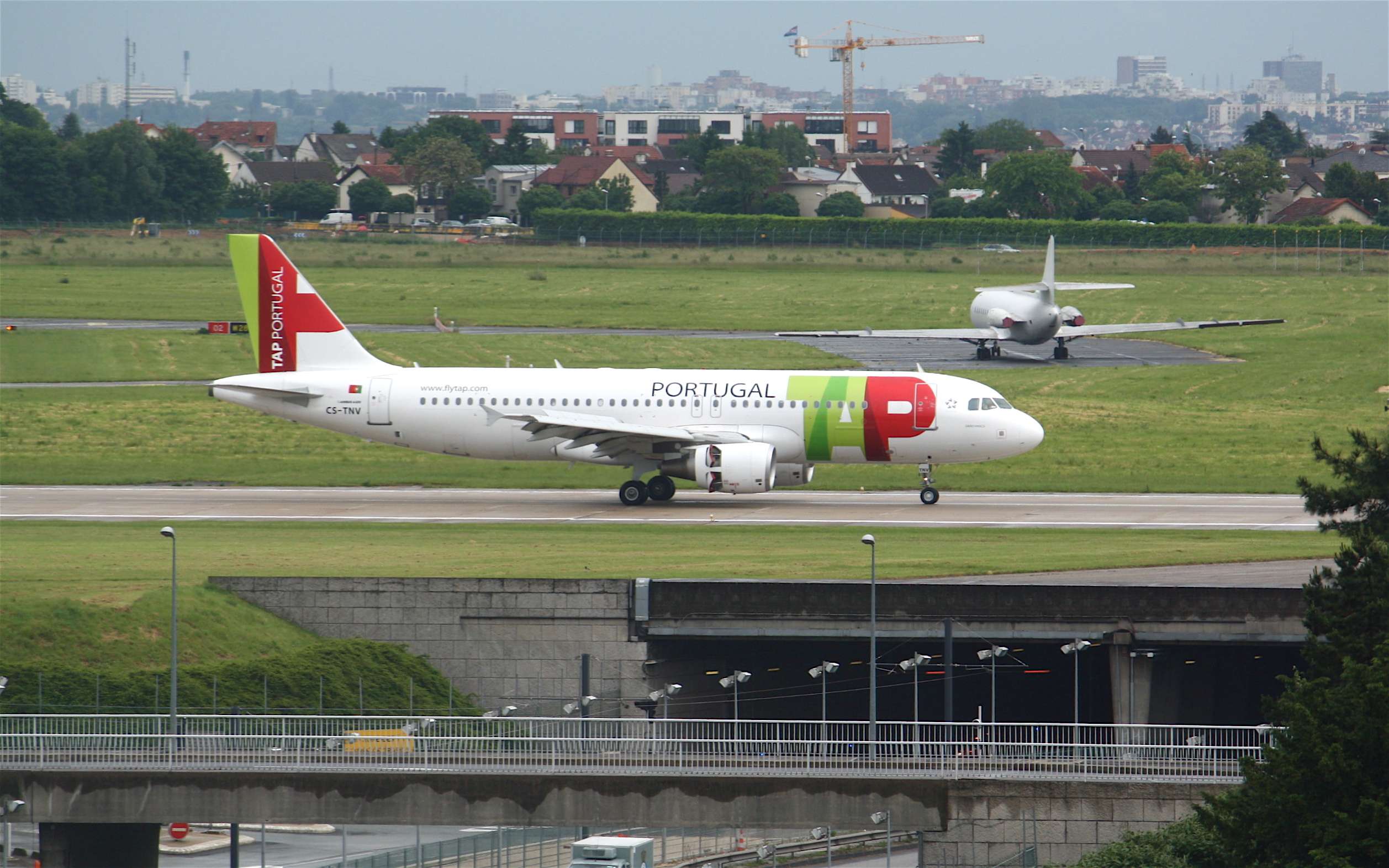 After about an hour spent at the observation deck, I head back to the other Terminal. I decided to spend the remaining time at the Air France lounge. It's not a great lounge, but it'll be better than hanging out at the gates. When I tried to go through security to get to the lounge, I was denied access by the agent because my flight was going out of Hall 1 and the lounge was in Hall 2. I thought, so what? I told them that there's no lounge in Hall 1 so why couldn't I just go to Hall 2 to go to the lounge, especially considering that I am entitled access as a SkyTeam Elite+. But, as is so often the case in France, I was just given a non and the rest was like talking to a wall.

So I wandered around the terminal a bit and went through security at Hall 1 around 7PM. I figured it wouldn't be so bad with only a half an hour until boarding time.

It was a zoo at the gate…overcrowded with a large group of kids screaming and running around everywhere. I was not amused considering how tired I was from travelling. I like kids, but seriously, where are their parents? Oh here's one…a mom taking a stroller for a spin…great 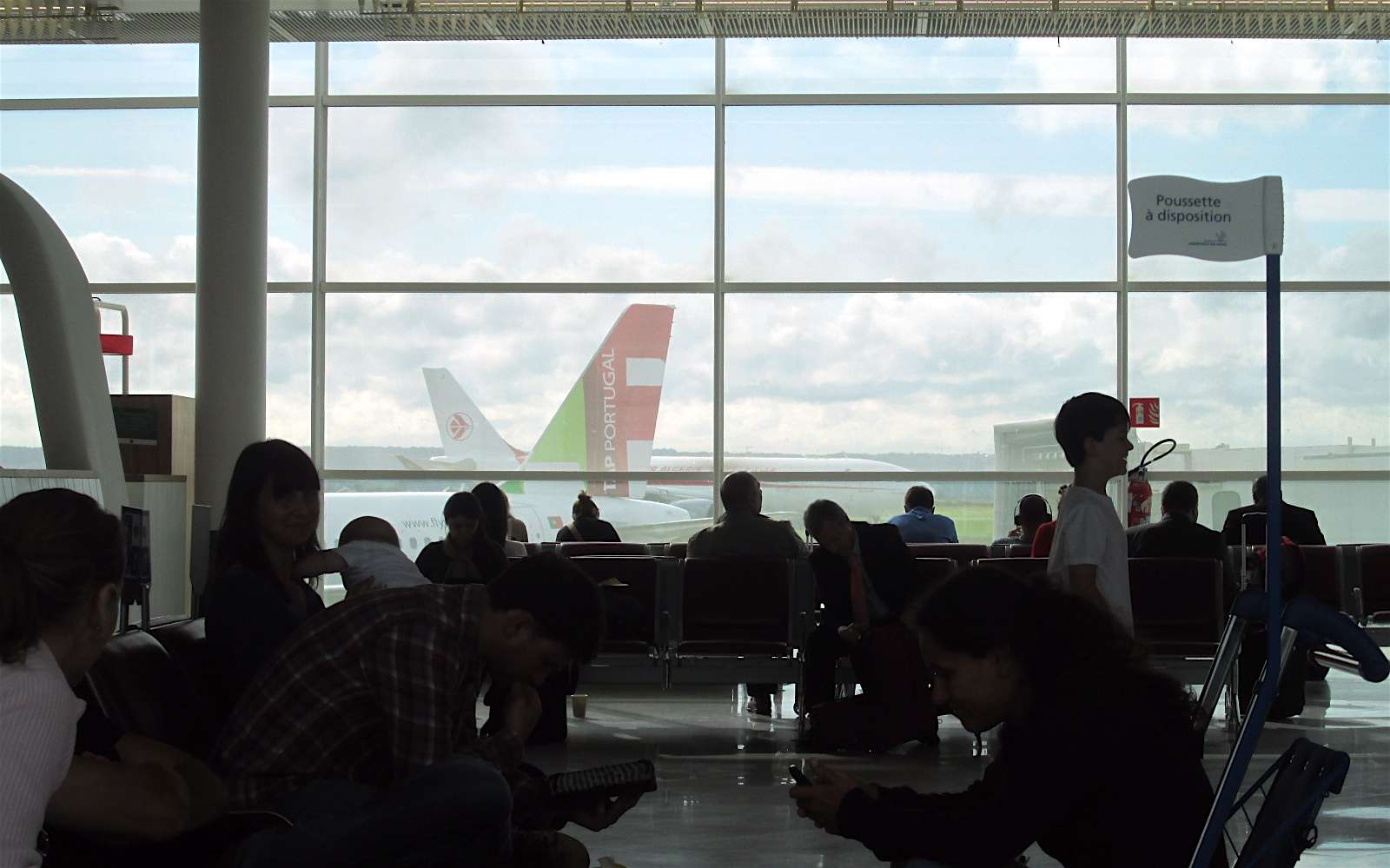 Hall 1 is small and cramped and with an Iberia A340 and several other flights going out, it was just way too crowded. I was just looking forward to getting on the plane and passing out for a bit. 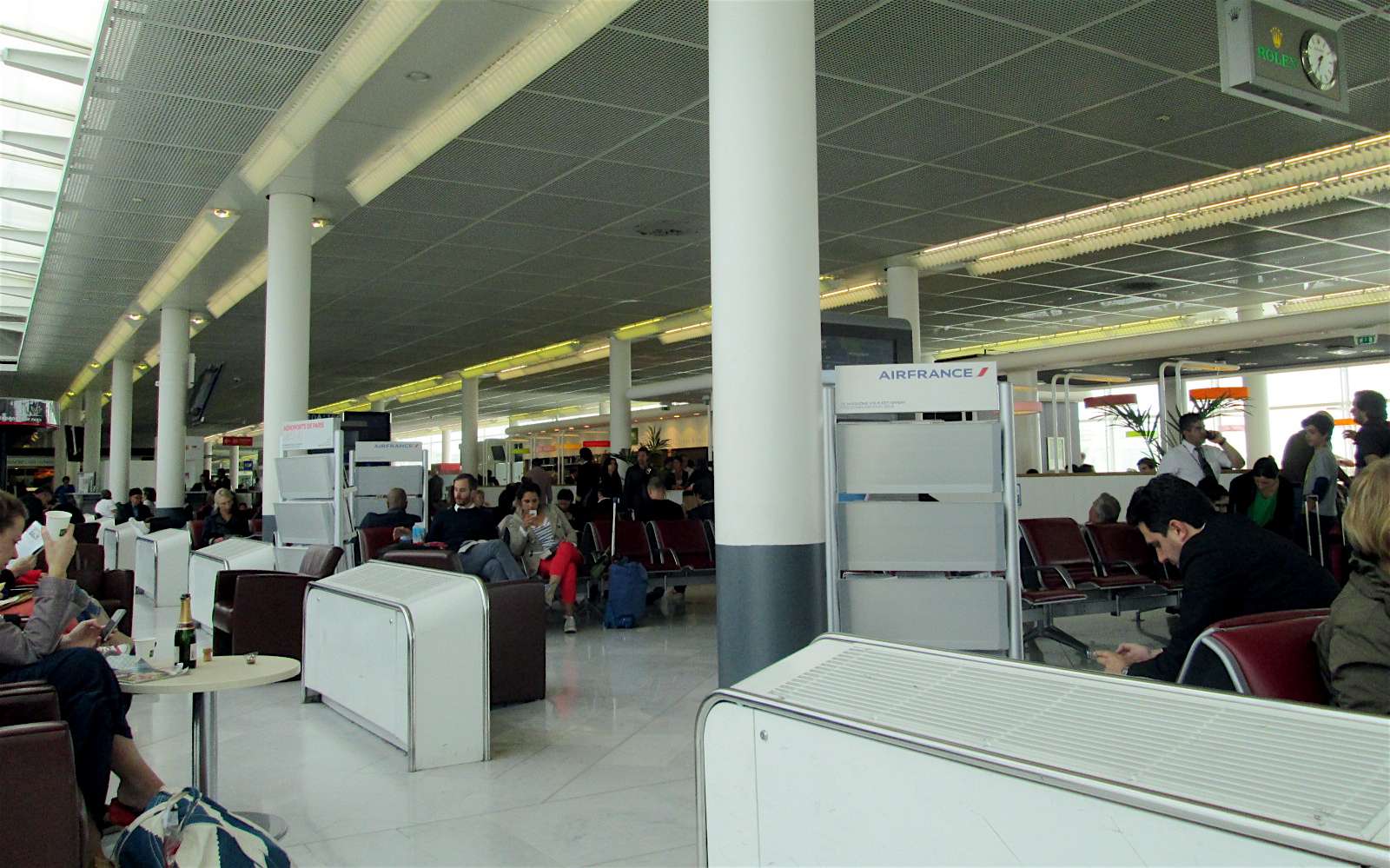 I can't even pass the time by planespotting–the windows have big spots on them to keep out the sun. Reminds me of DTW. 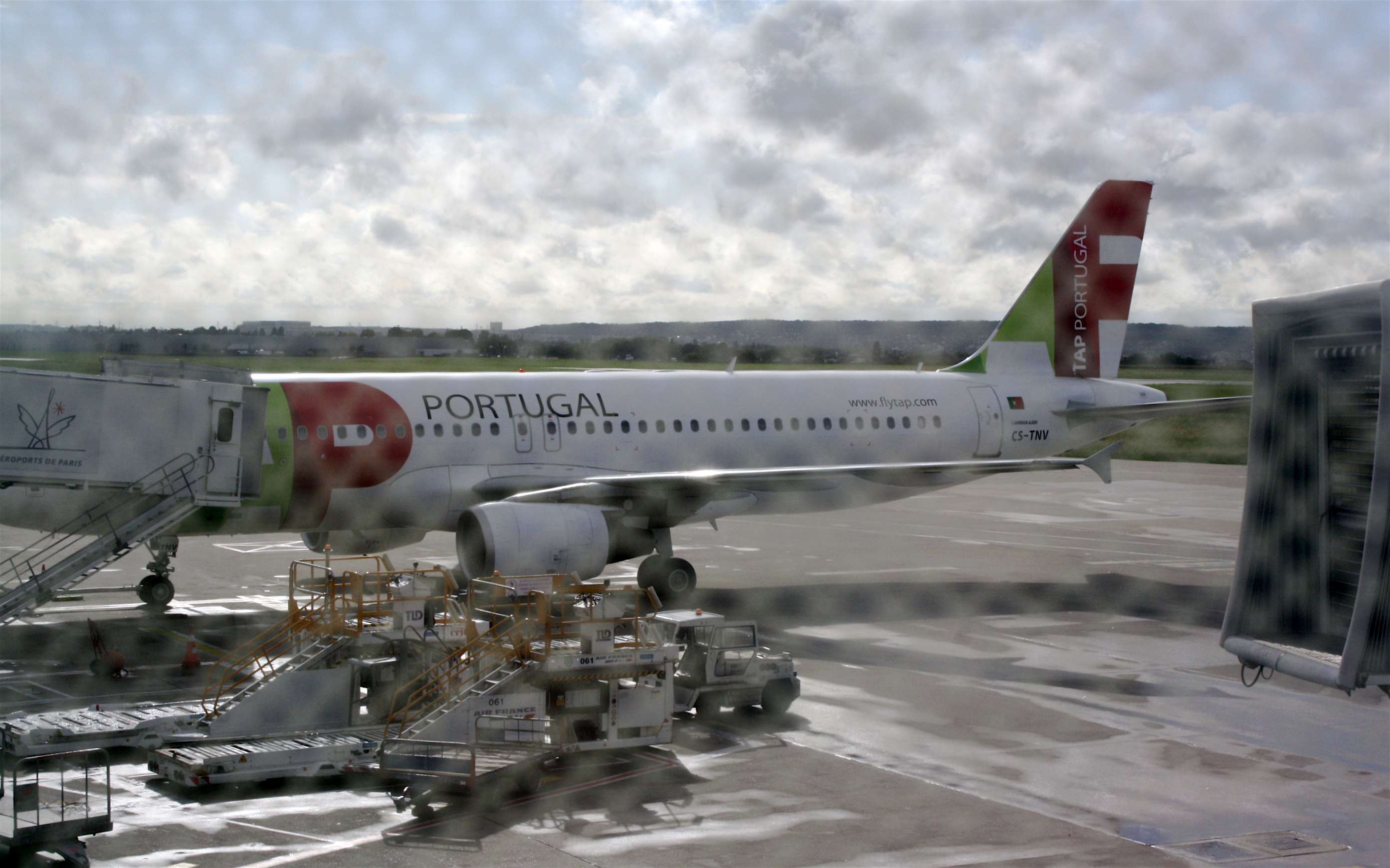 I headed to the FIDS screen to see which gate my flight would be boarding from and saw that it was delayed 20 minutes. Ugh…I don't think I can handle another 20 minutes in this crowded and noisy hell. 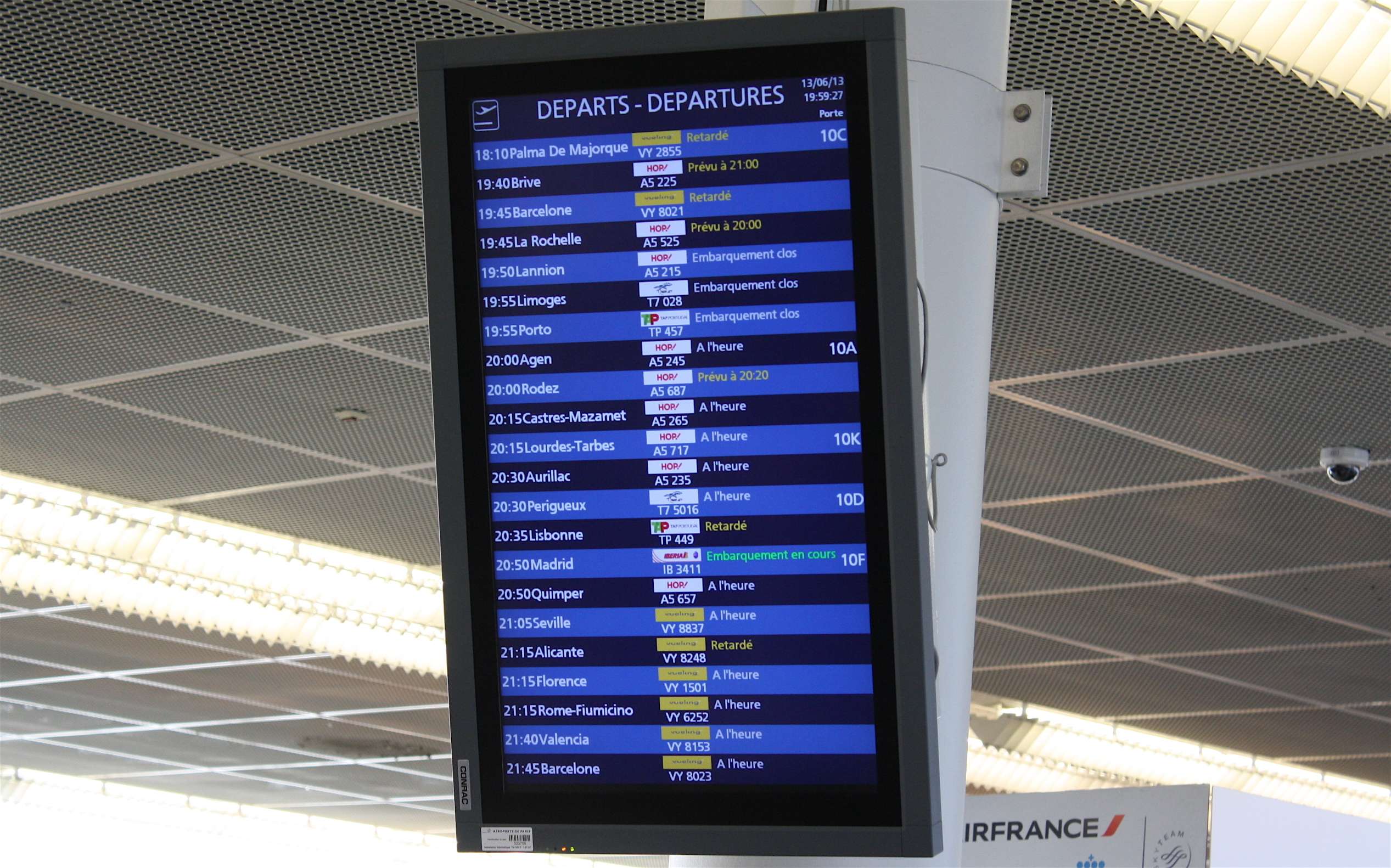 I stayed near the FIDS screen to see when the gate would be displayed. All of a sudden at 8:20PM, the screen changed and shows Last Call for my flight. Huh? How do you go from no gate displayed to Last Call!? As I head towards the gate I hear my name being paged. How the heck did all the other passengers know which gate to go to when it was not displayed?

Boarding will be by bus, not really surprising since I couldn't see our plane. It doesn't bother me usually since it's always a good opportunity for some planespotting. 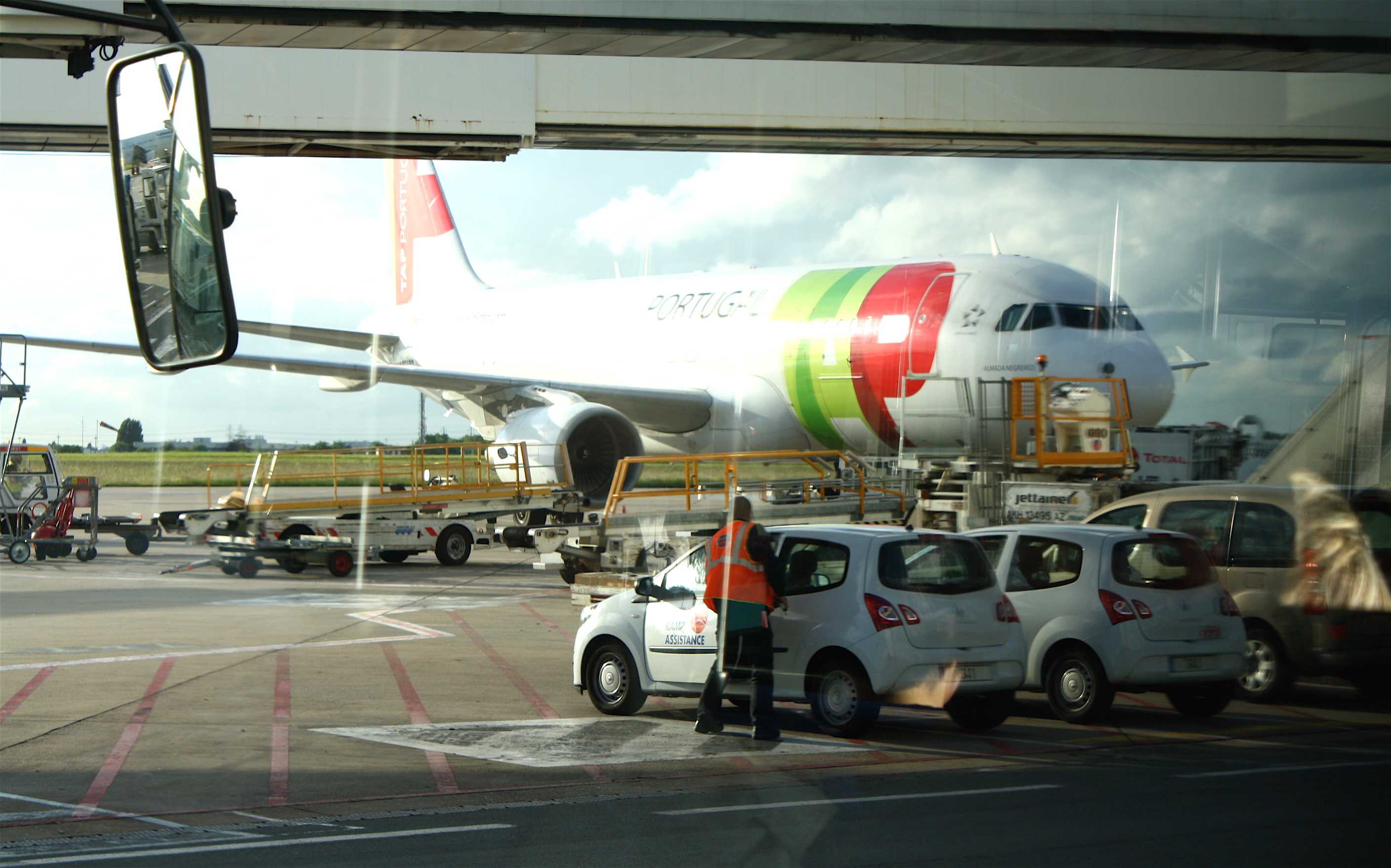 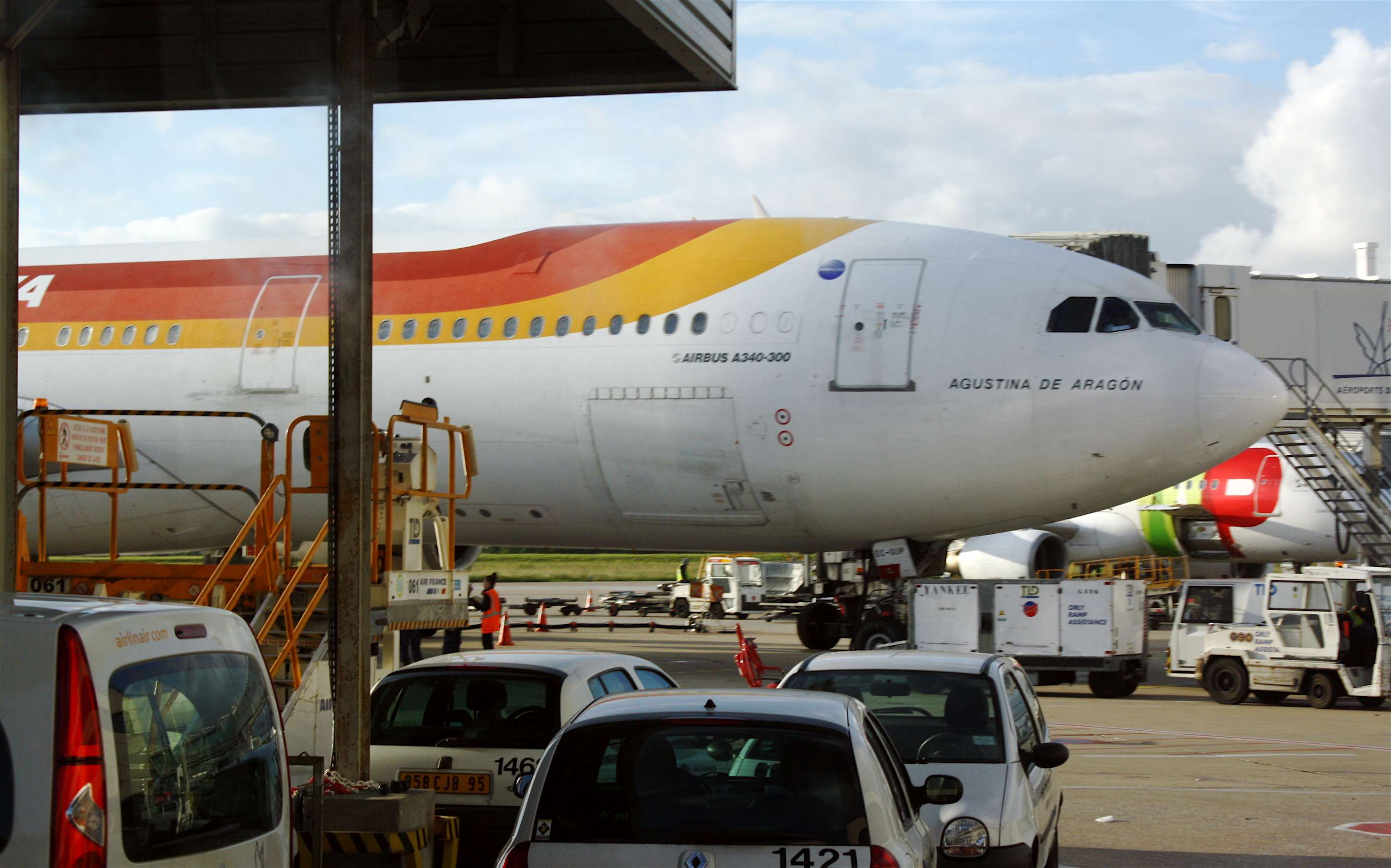 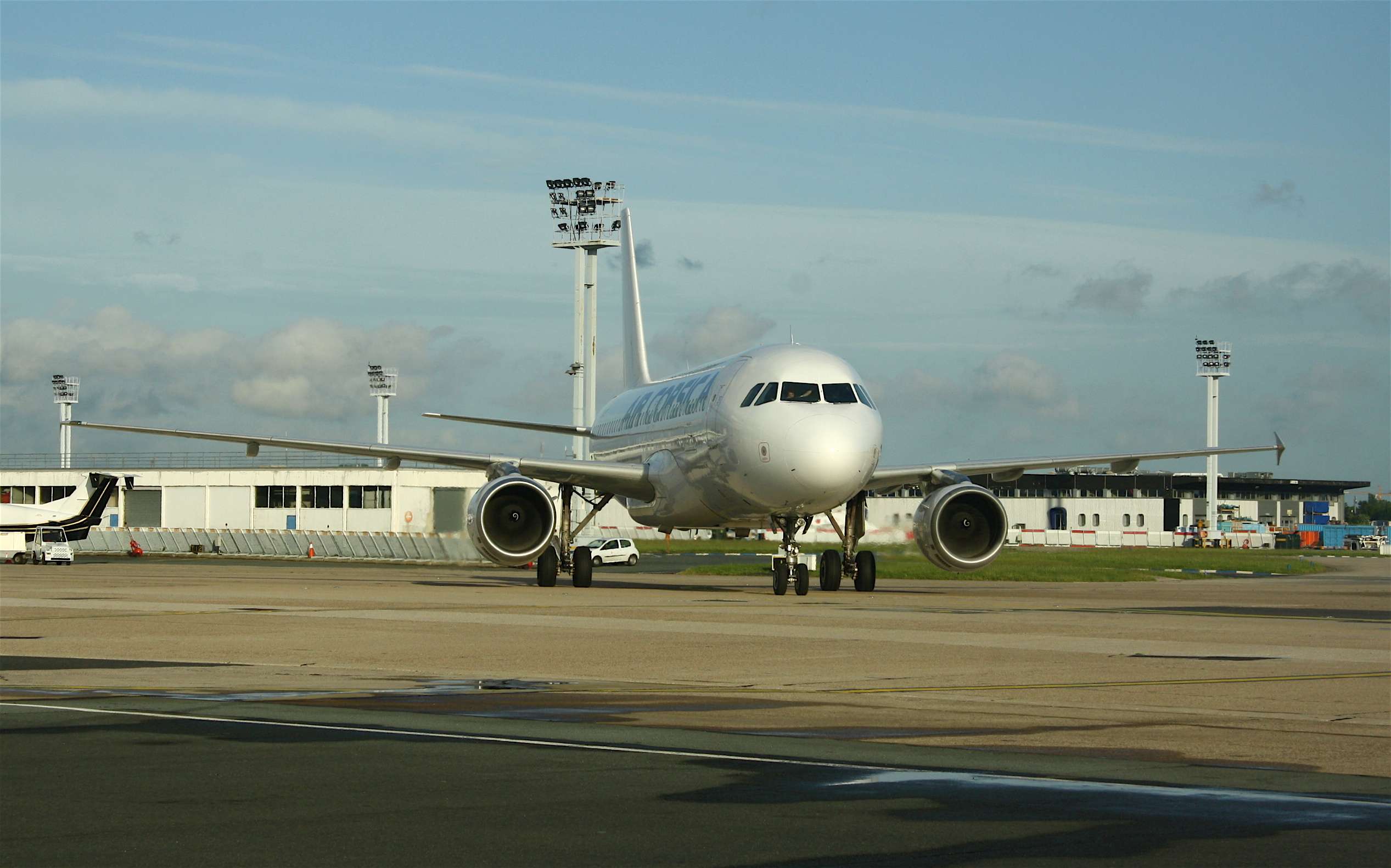 An ATR in the new (At the time) HOP colors. I wonder if it's mine. 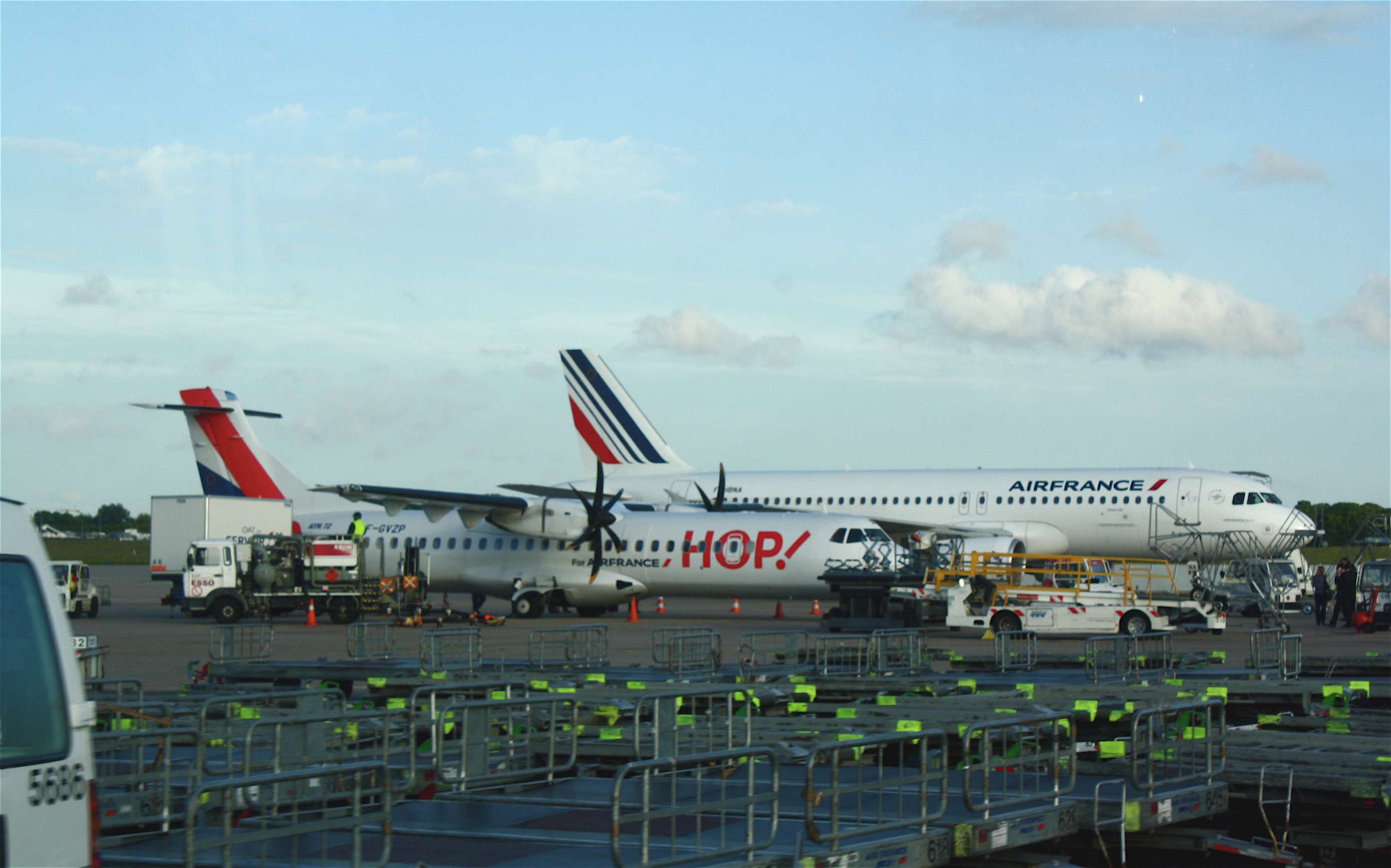 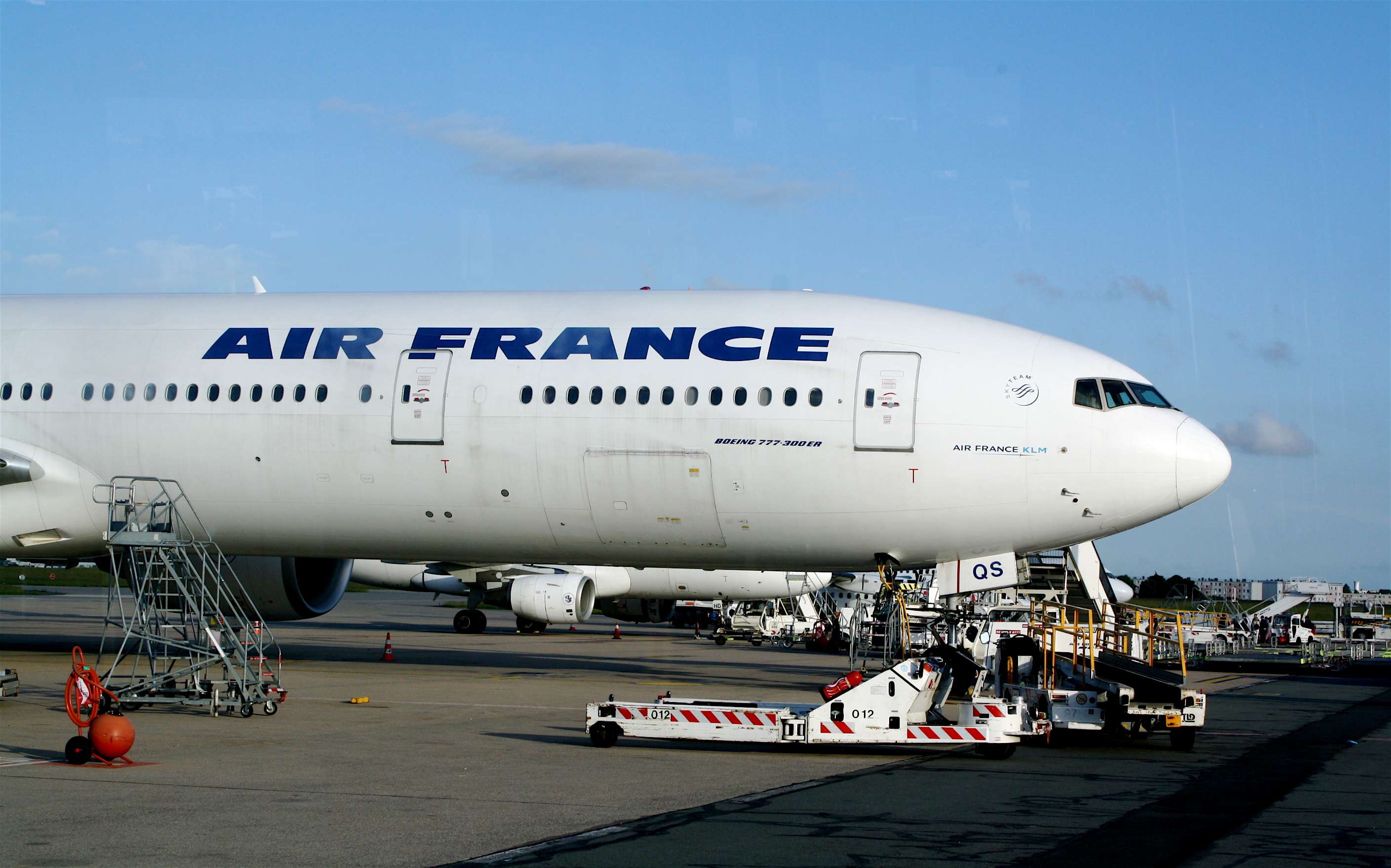 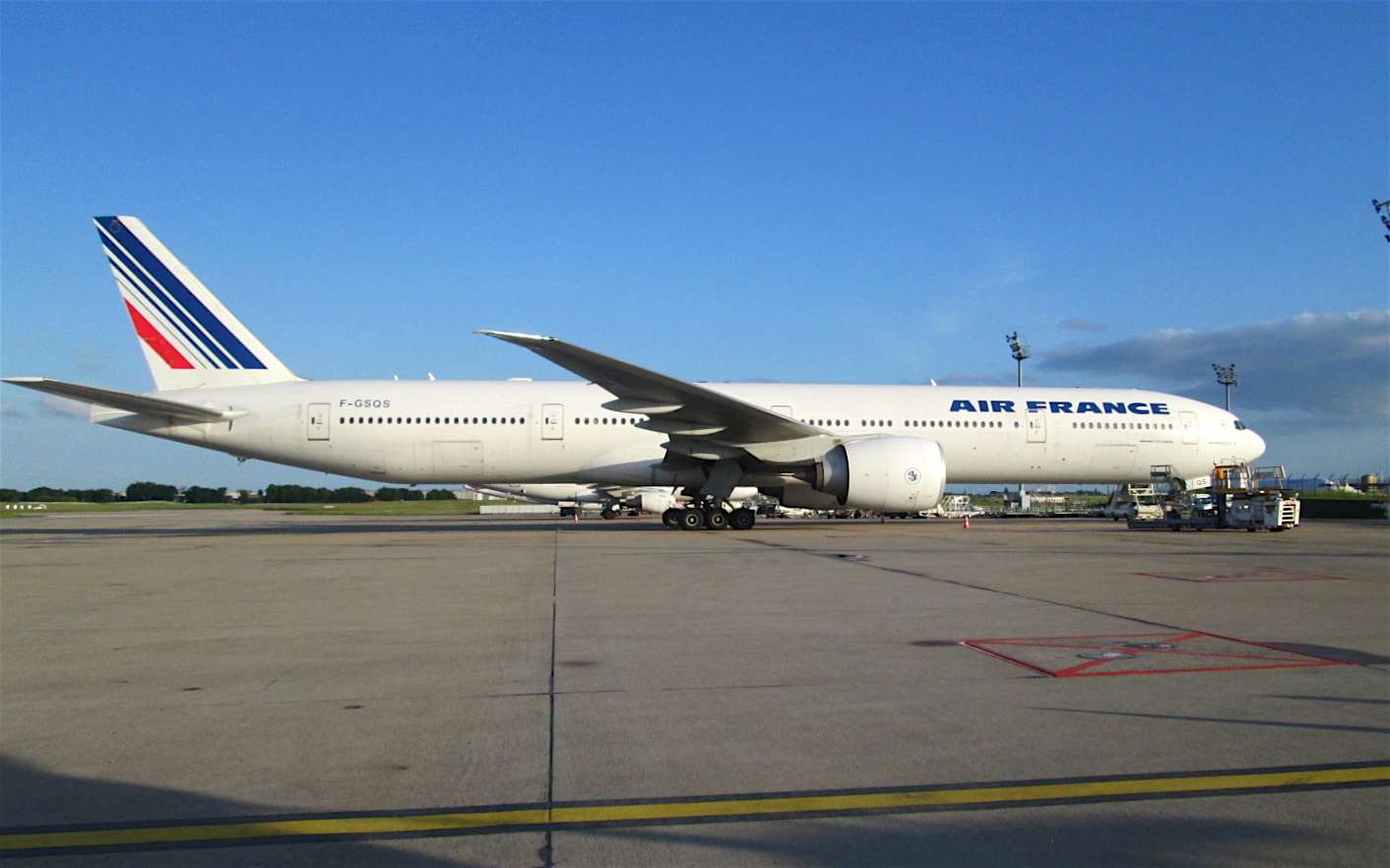 My plane is blank. Guessing that they're getting ready to paint it in the new colors.

Because the load factor is low (I counted 27 pax) the FAs ask me to sit toward the front for weight and balance. Sure, no problem! It's empty up front, so it will be nice to stretch out. 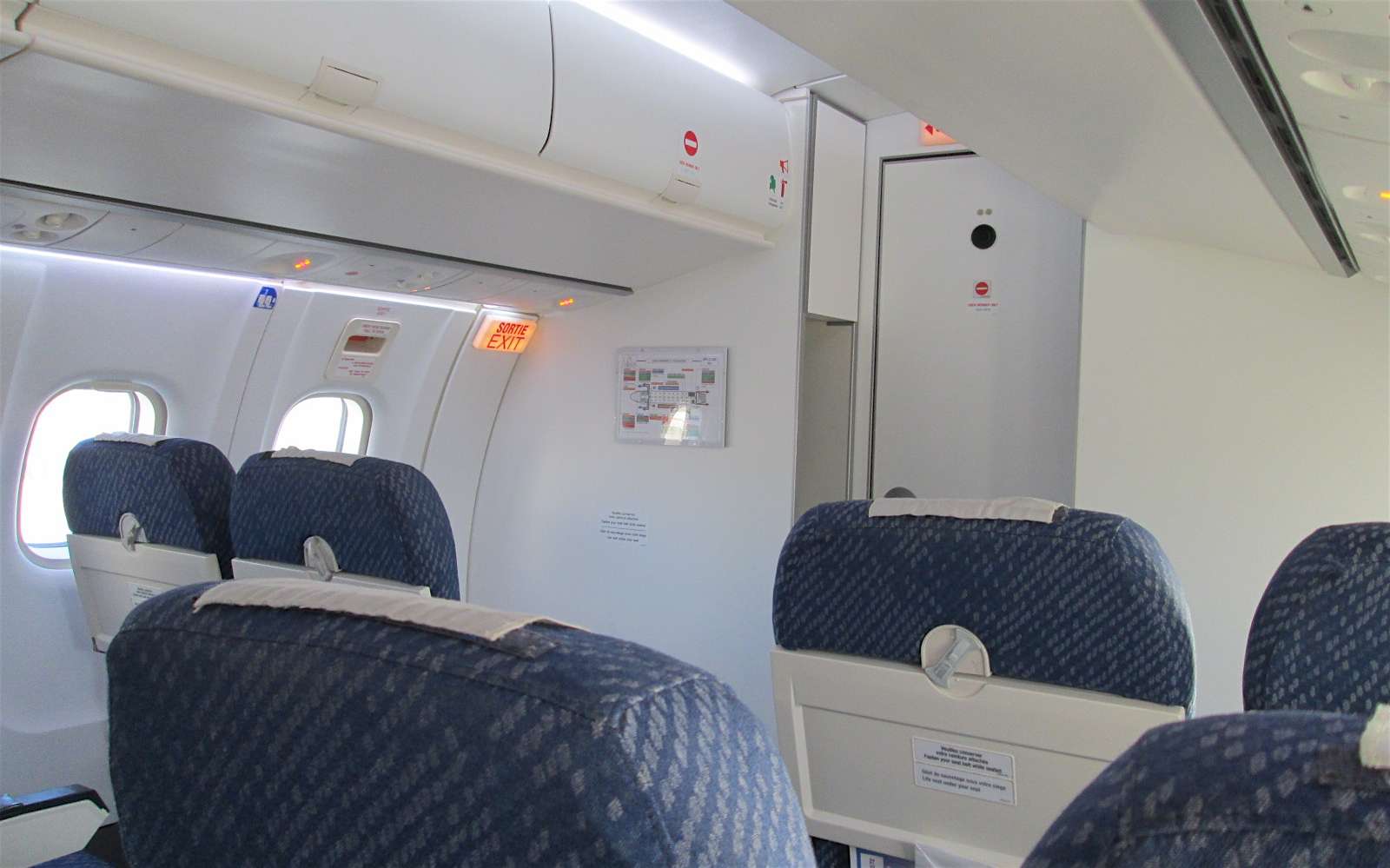 The seat pitch is tight; good thing I have room to stretch out. 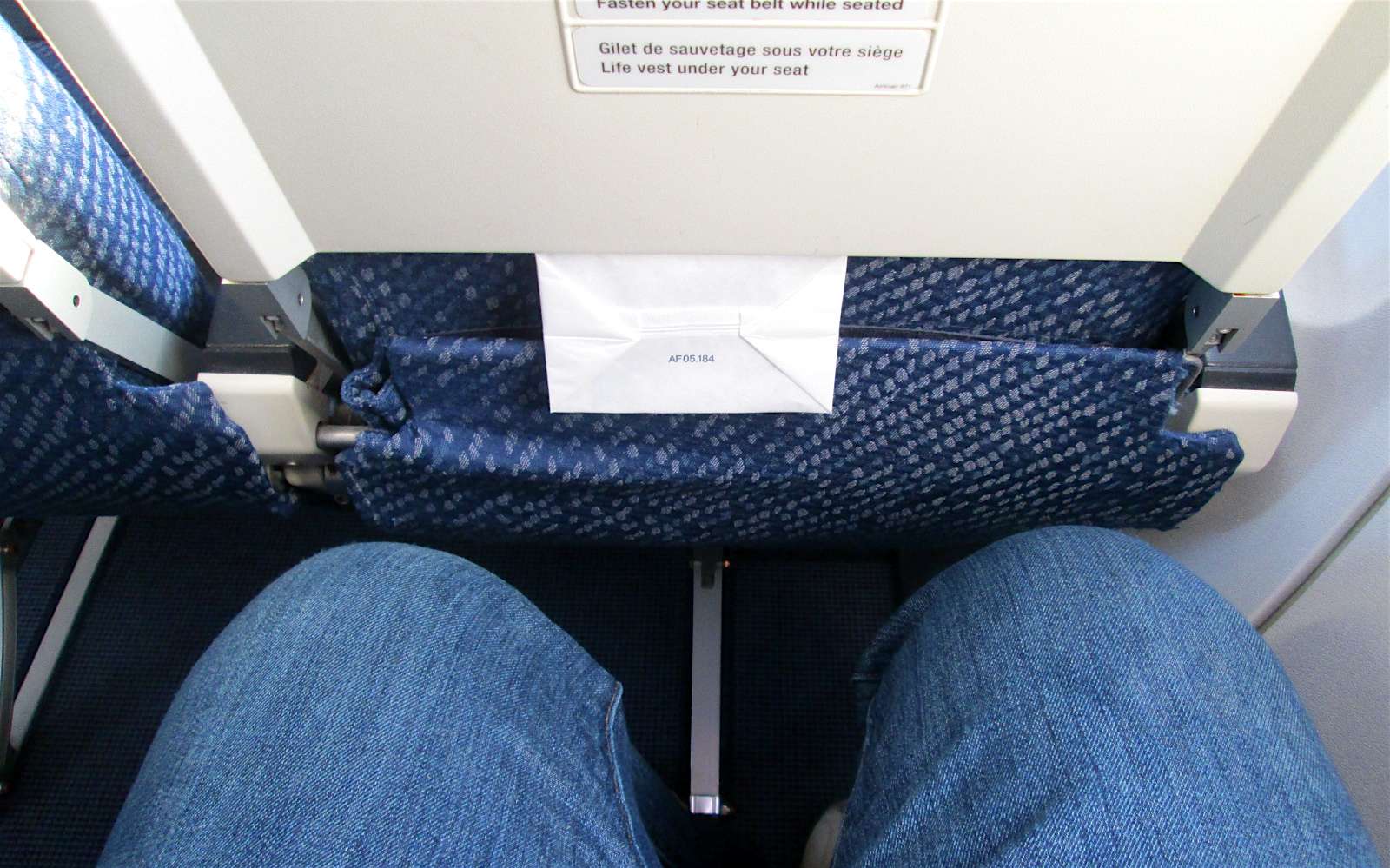 Empty flights are so pleasant, but so rare these days. 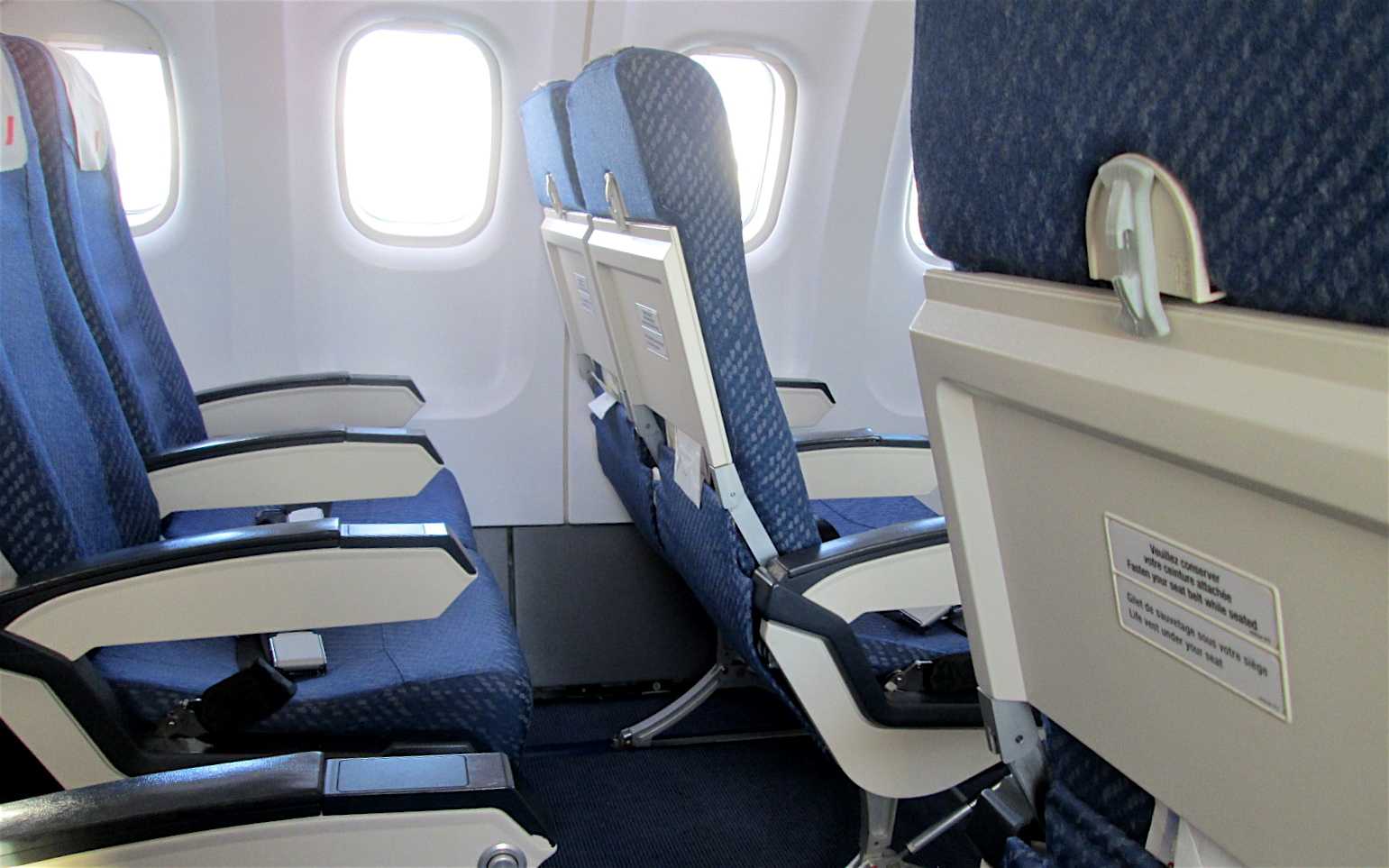 In the end, the flight ends up being delayed about an hour due to the Flight Information display problems.

It had been a while since I had been on an a/c with propellers. I used to fly US Airways Express Dash-8s all the time, but it had been years. I had forgotten how noisy they were during take-off. Once in the air, however, the noise level wasn't so bad. 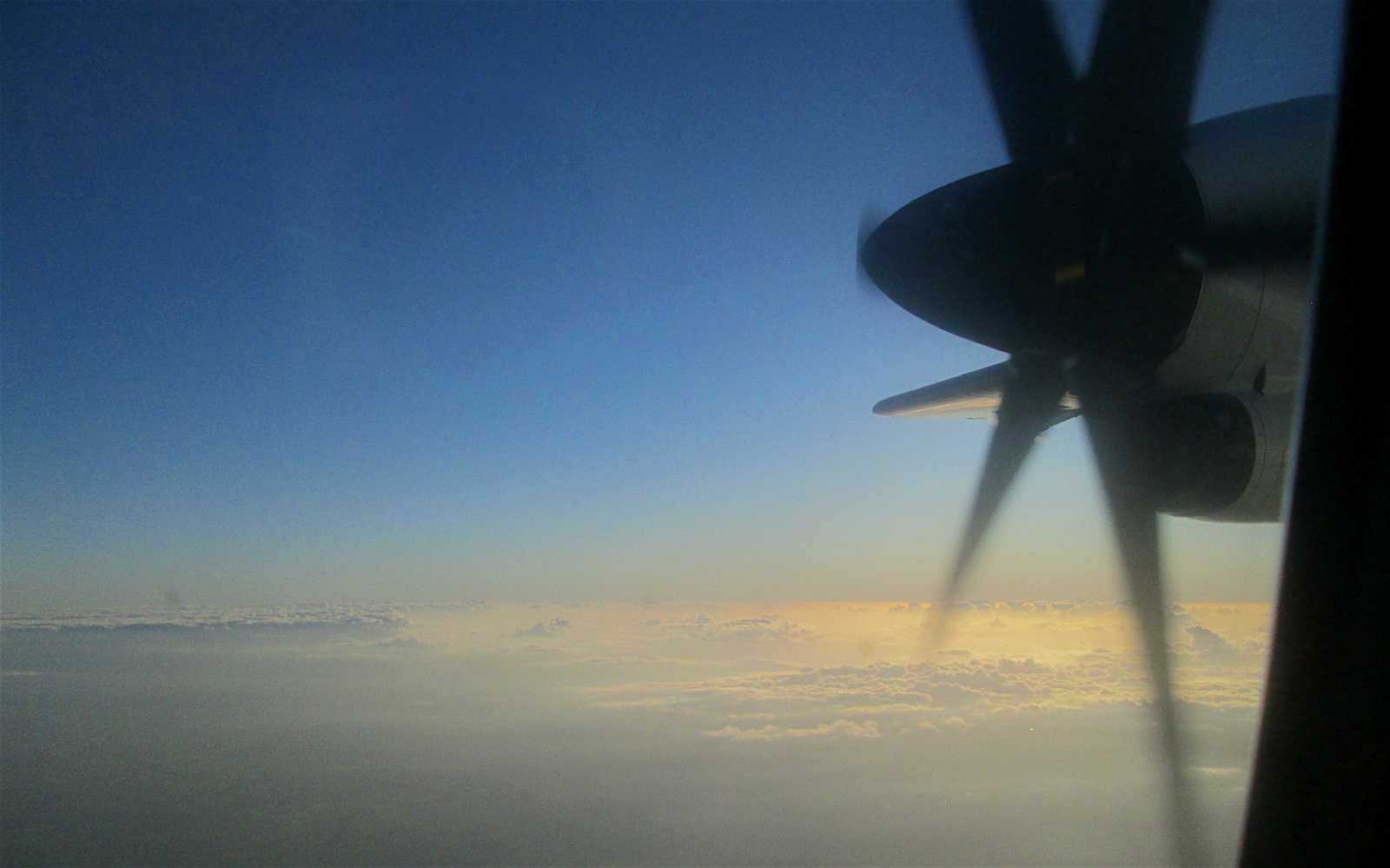 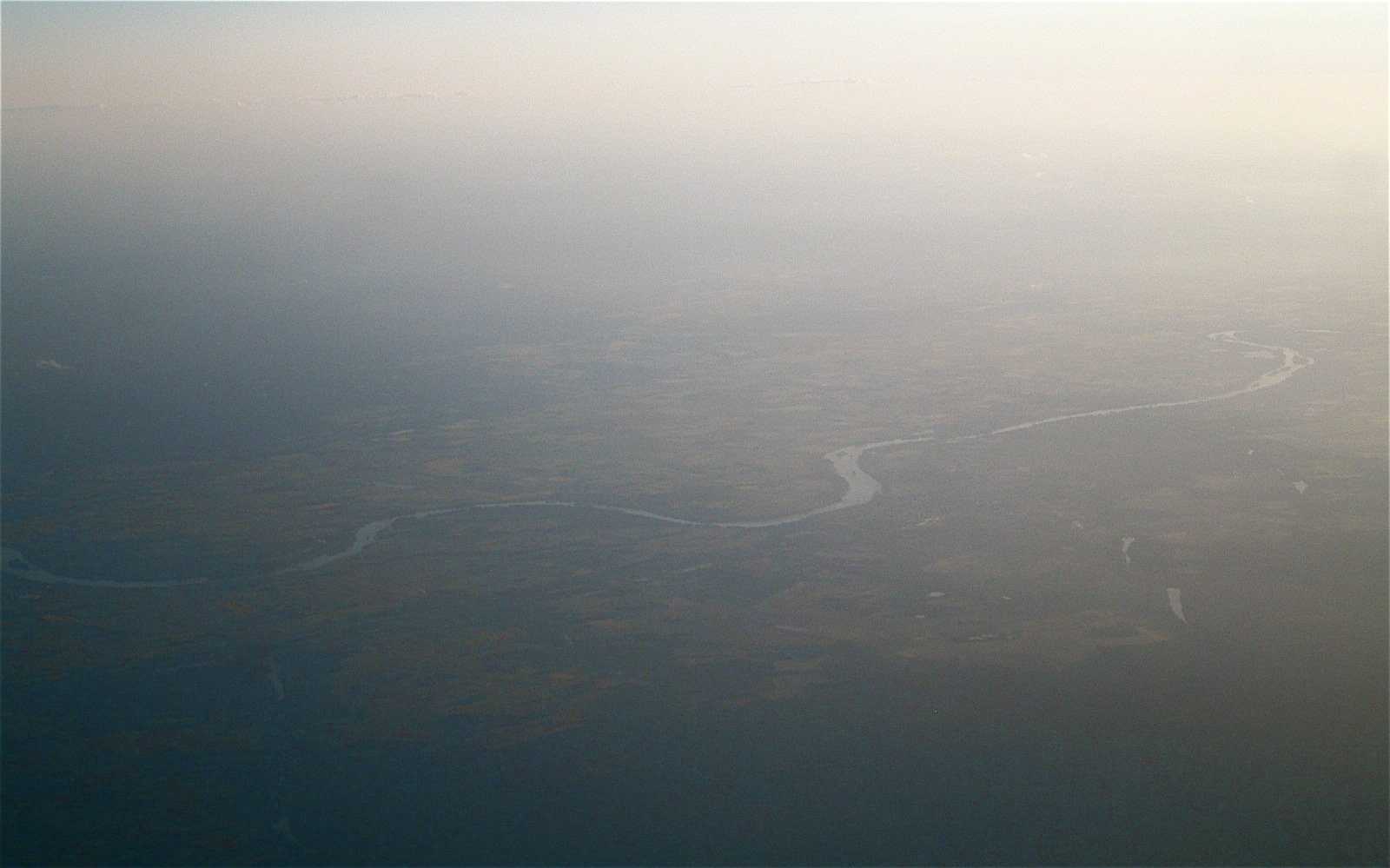 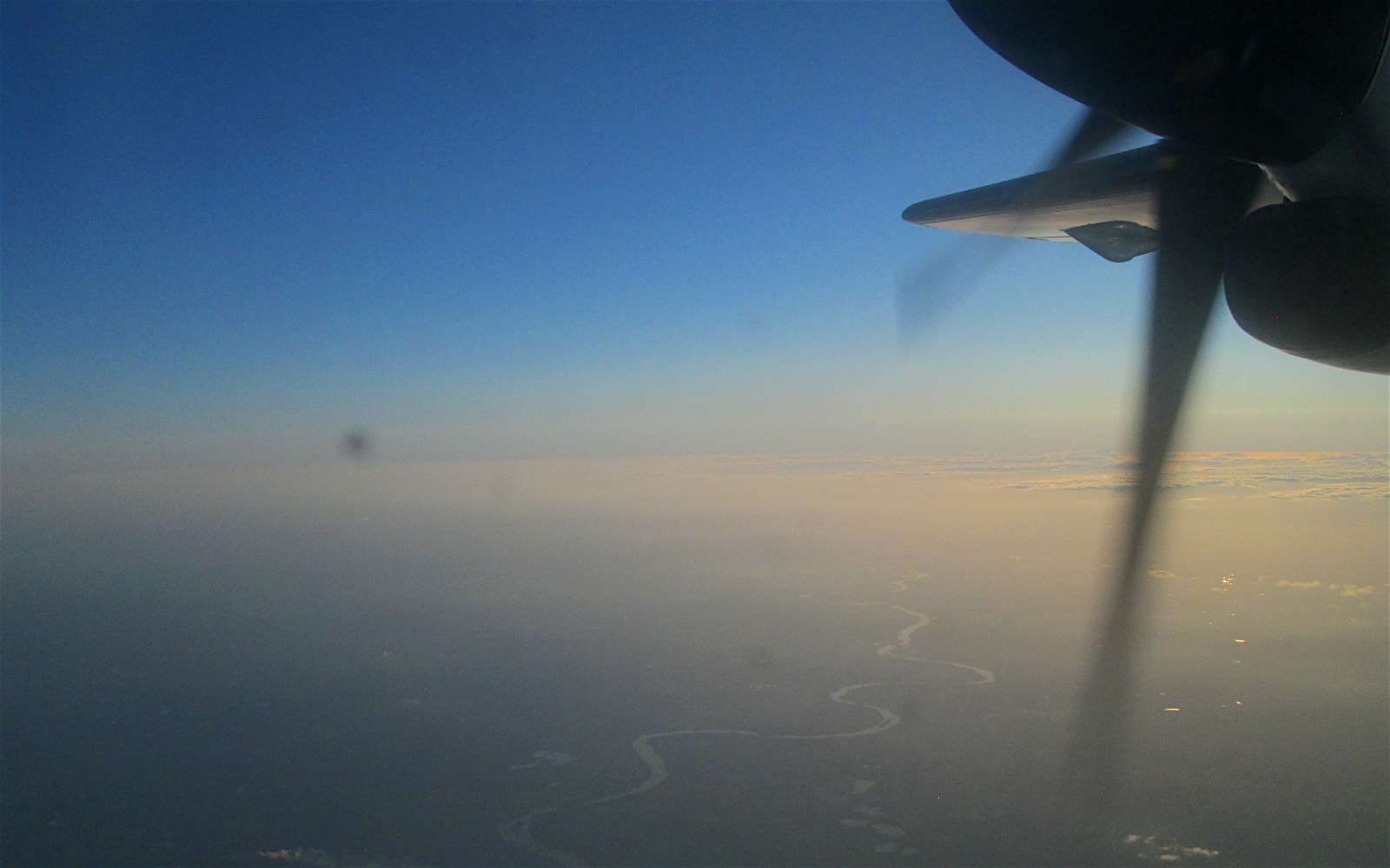 I fell asleep as the sun set. Darn, I missed the champagne, caviar and lobster service :-P 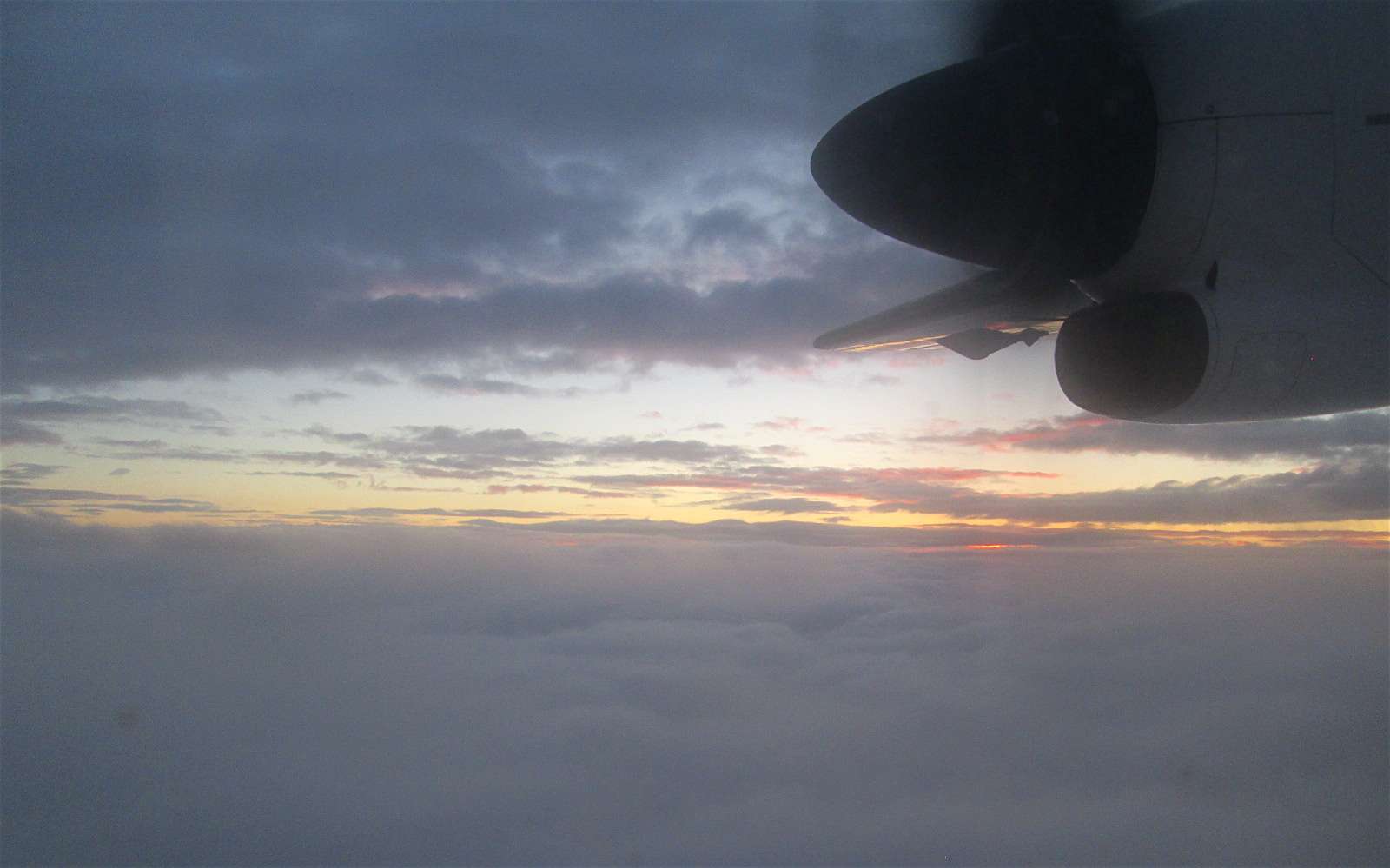 I didn't wake up until landing. We got to the parking stand one hour late. And that's the end of this short report :-)

Overall an OK flight. The experience at Orly was miserable, however.

An hour delay for a flight scheduled to be an hour long, it not great.

Cabin comfort: The seats were narrow and hard and the seat pitch was tight, however, because the flight was empty, having the row to myself made the flight much more comfortable.

Crew: Ground crew was great, the agent at the connections counter was very nice and efficient. The gate agent was very nice--I know the display issue wasn't their fault. The flight crew was very professional and pleasant.

The contributors of Flight-Report published 6 reviews of 3 airlines on the route Paris (ORY) → Rodez (RDZ).

The average flight time is 1 hours and 19 minutes.