#54 out of 141 Airlines A minimum of 20 Flight-Reports is required in order to appear in the rankings. 297 reviews

By Quirrow 3748
Published on 4th June 2015
Photos of the early winter season at Mont Tremblant: 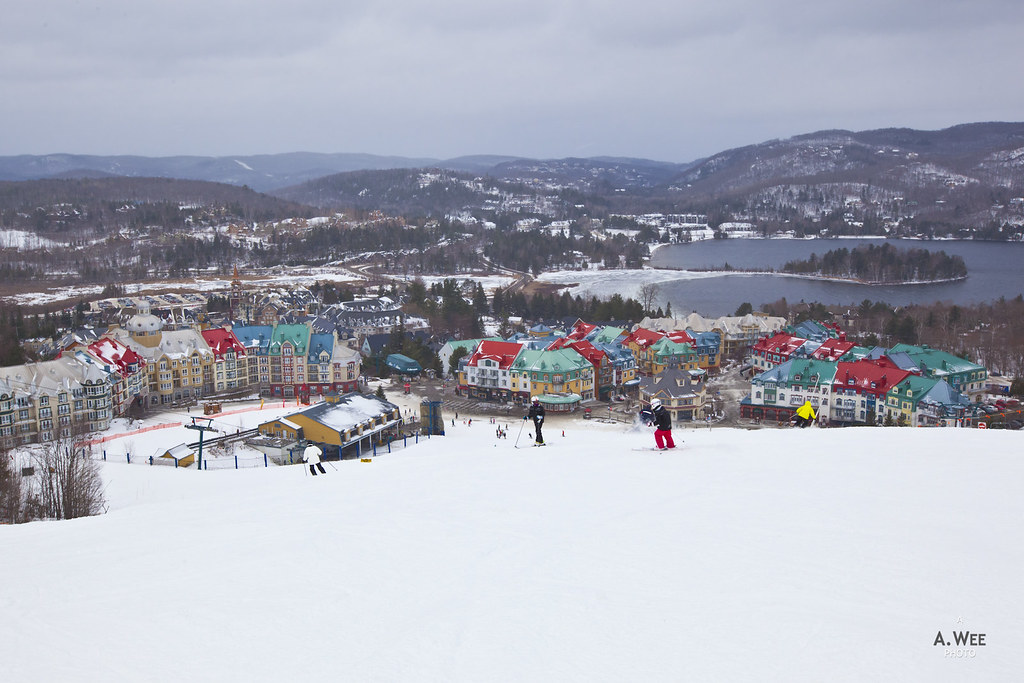 Village of Mont Tremblant from the slopes 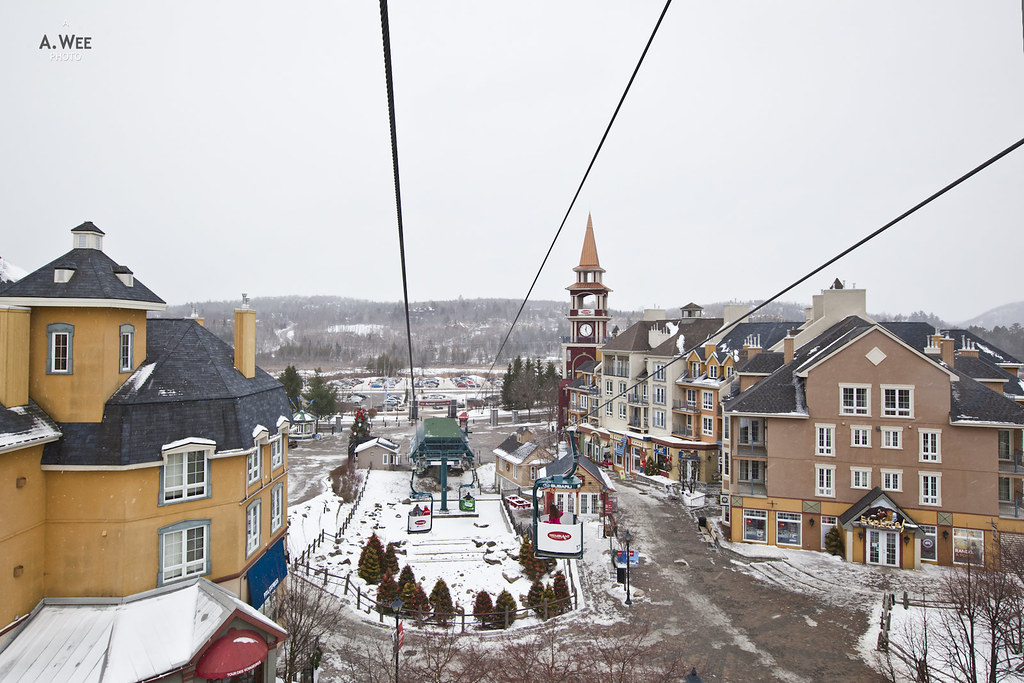 The SkyCab in the village 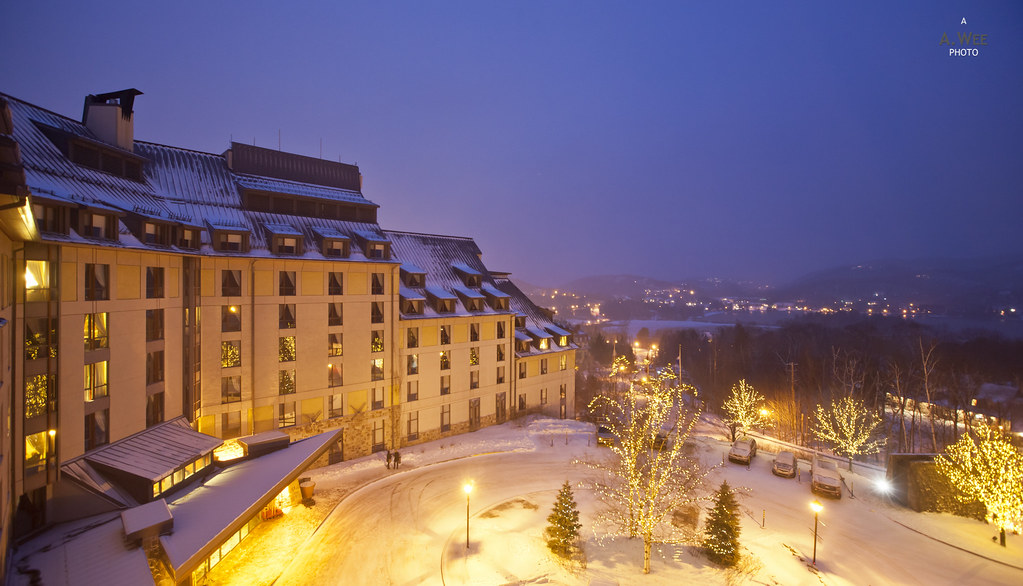 There was a heavy snowfall during my visit to Montréal, fortunately the city has a good metro network to hide from the cold! 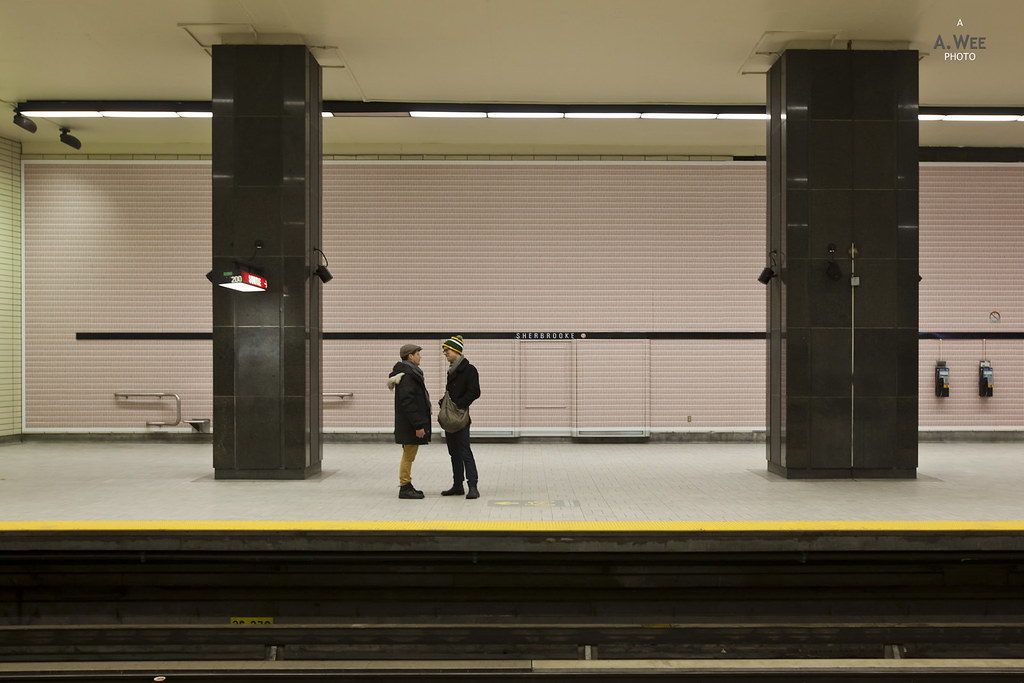 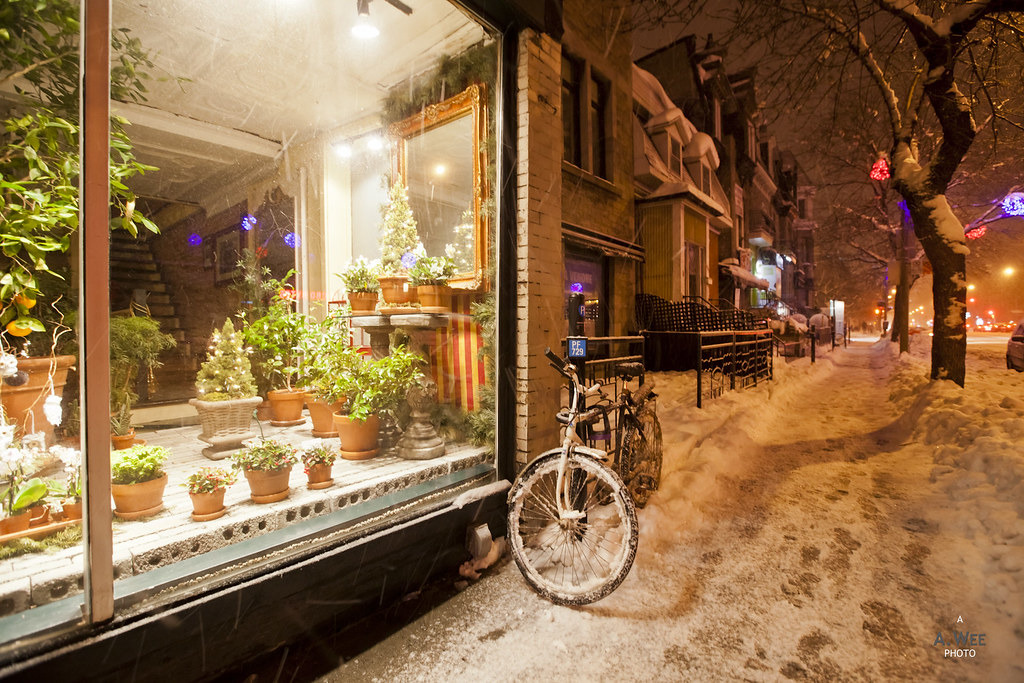 Winter in the city 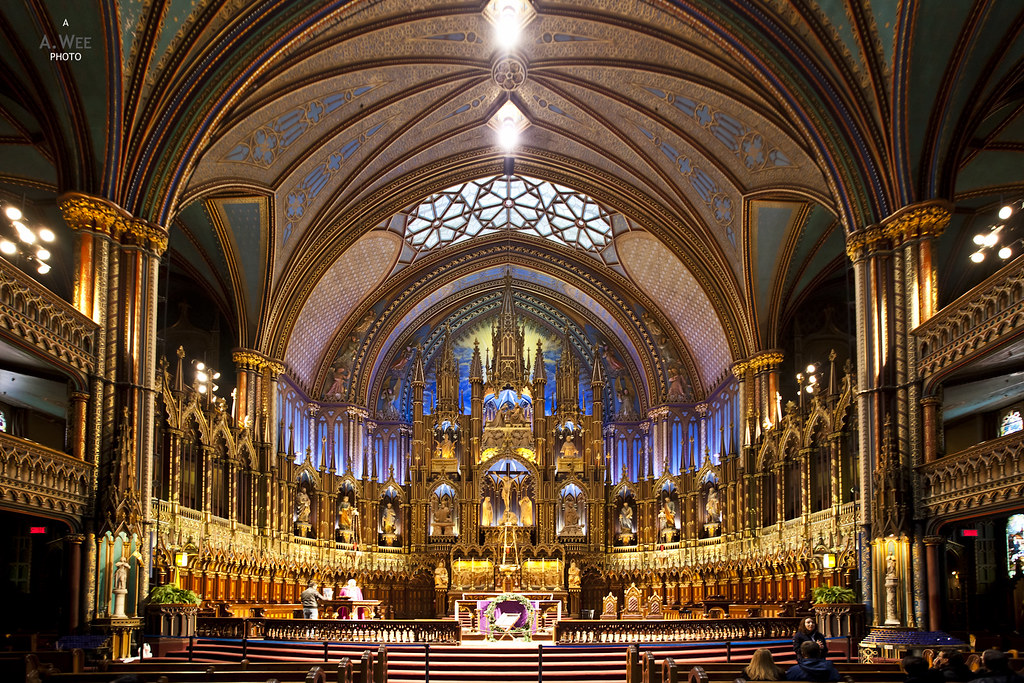 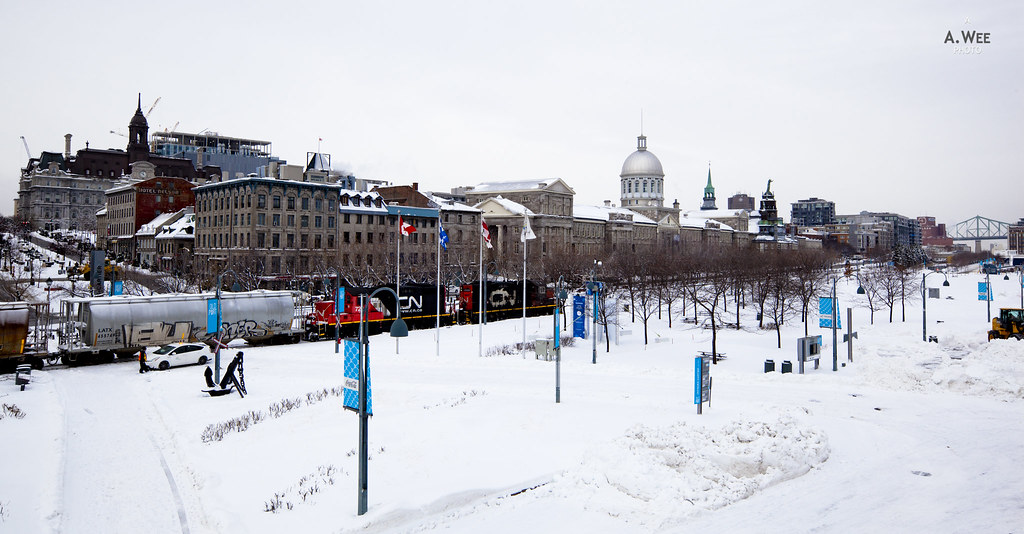 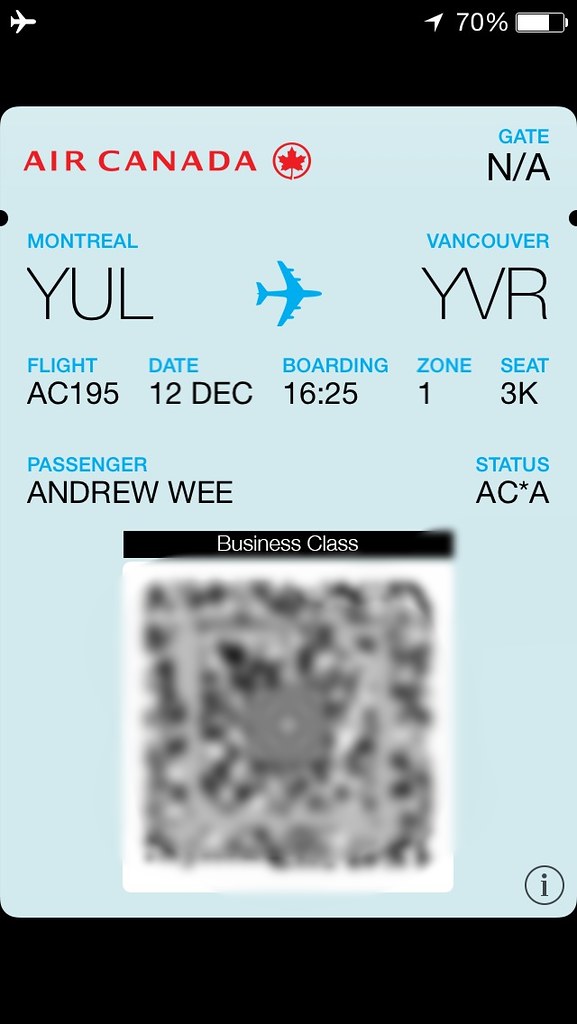 After taking the taxi which I booked and paid using UBER, I was dropped off at the airport just on time for check-in. Turns out the snow in the city have made traffic much slower. While it was busy by the sidewalk that the taxi had to drop me off beside another car, I still manage to navigate my way through with the bulky snowboard bag to the Air Canada Premium Check-in counters. Fortunately, there was no queue and the check-in lady was just straight to the point, with a no-nonsense attitude, remarking I had no time to head to the lounge and suggested I head straight to the gate. 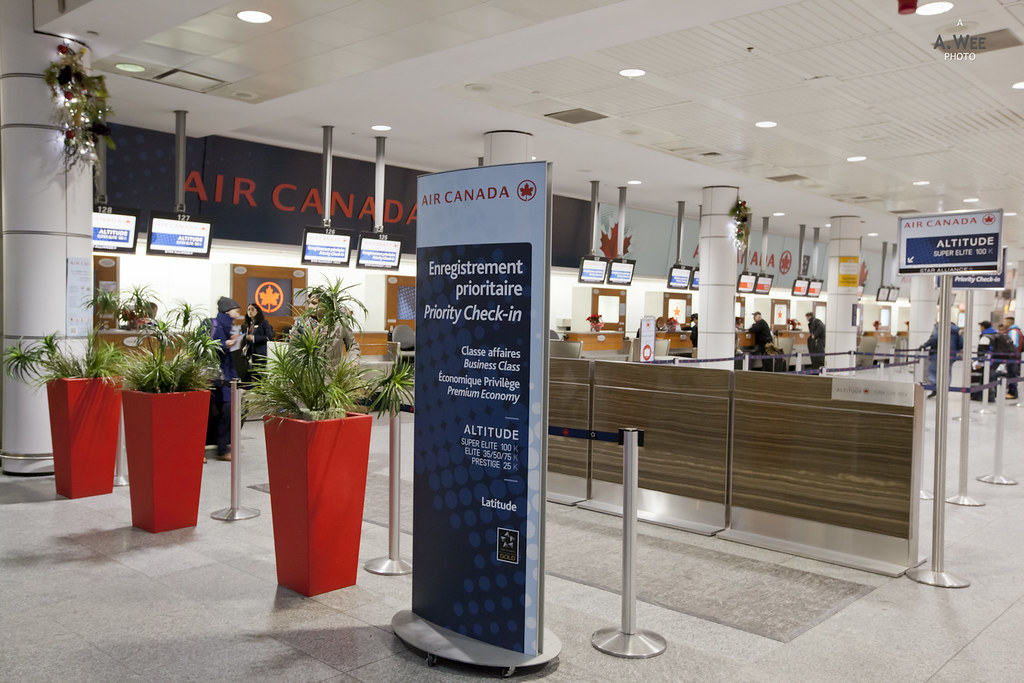 I did stop by the Starbucks store opposite the check-in counters to get a Québec mug and proceeded through the premium security lane which was took about 15 minutes.

Frequent travellers to Montréal should know how the airport is really long and my business class ticket only entitled entry to the Domestic Maple Leaf Lounge, even though the International Maple Leaf Lounge was just beside where my flight was due to depart. The lounge lady was adamant in not letting me through, and since I have no more Star Alliance Gold membership, I just had to head to the gate. 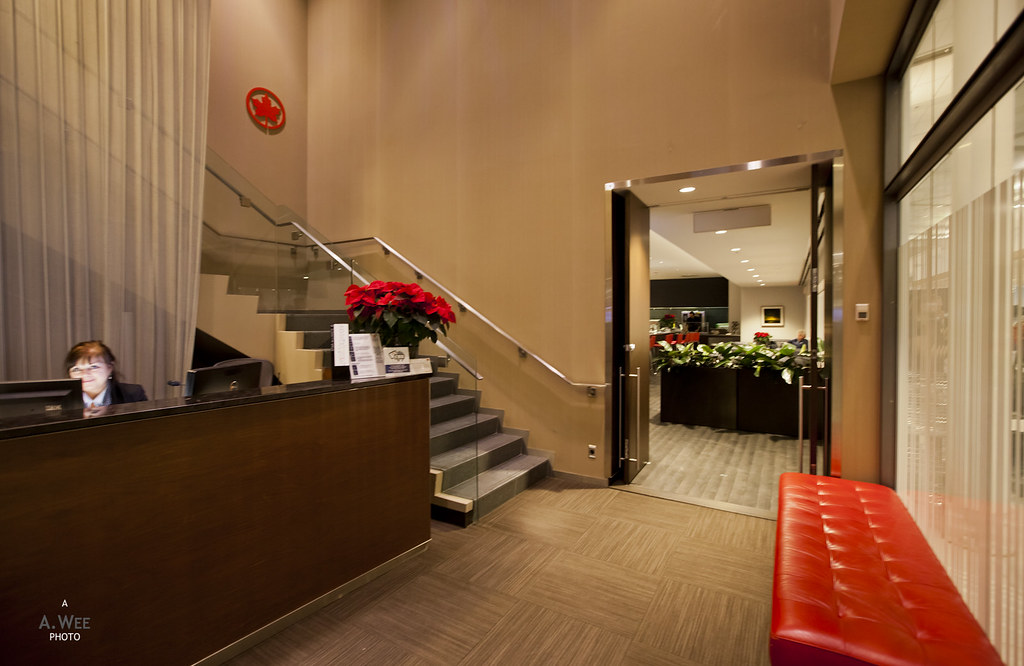 Business class has just completed boarding when I arrived by the gate and they were calling for Economy to board. I hurriedly showed my boarding pass and that was when I was asked for a piece of government ID. I showed them my ID issued by another country since I am not Canadian, and she was kind of confused and conferred with her colleague but since it was a legitimate piece of government ID, I was let through. I always carry my passport anyway if she wanted more, but it would have meant taking it out from the bag which was more inconvenient and could hold the line longer. 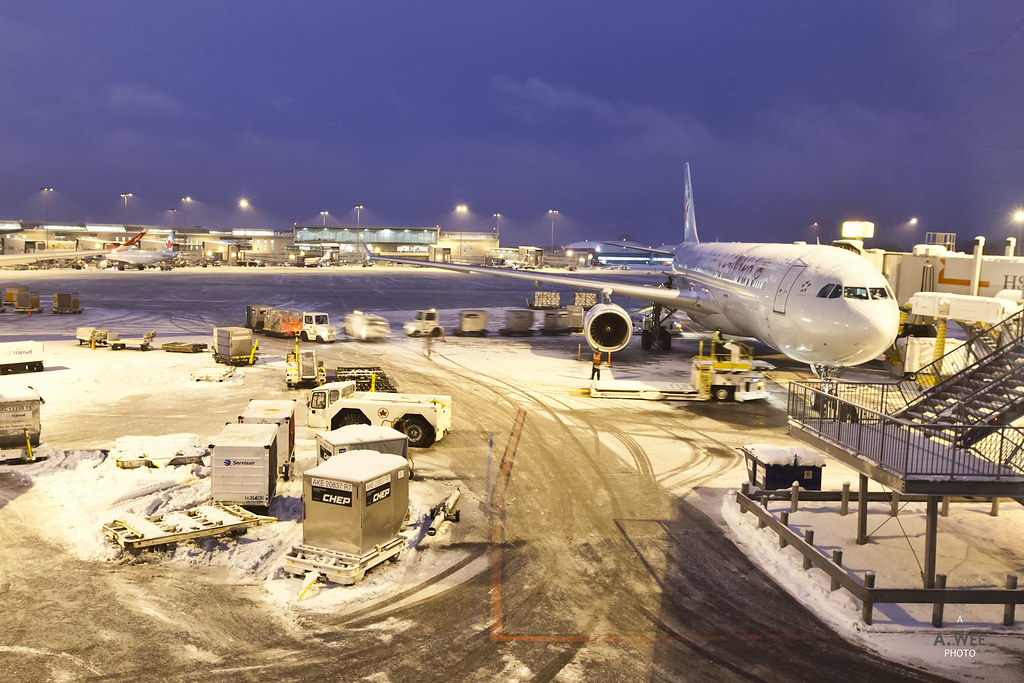 Air Canada A330 at YUL bound for YVR

As I got seated, I noticed some sort of Air Canada VIP seated on 2K, and the air stewardess on this flight were really trying to welcome him and make him as comfortable. One thing different though was that the menu was distributed by the crew and the flight did not have any copies of 'The Globe and Mail' which is supposed to be the national newspaper. For a flag carrier to not have any of the national newspaper, that seems a bit of an issue! 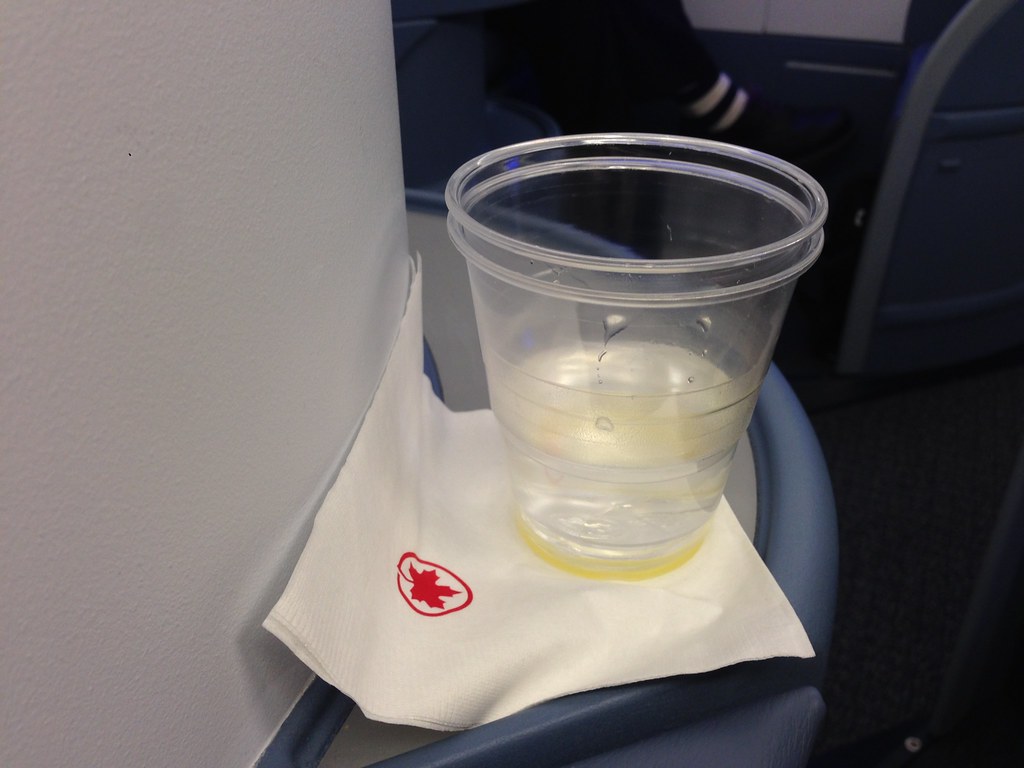 Boarding still took some time and as I was kind of tired and thirsty since I did not manage to enter the lounge for a drip of water, I got a cup from the crew that passed by. After that another crew member went around with juice and water. None of the passengers seems to even ask for any other beverages, and I am not sure if Air Canada serves even champagne on Business Class for their domestic routes. 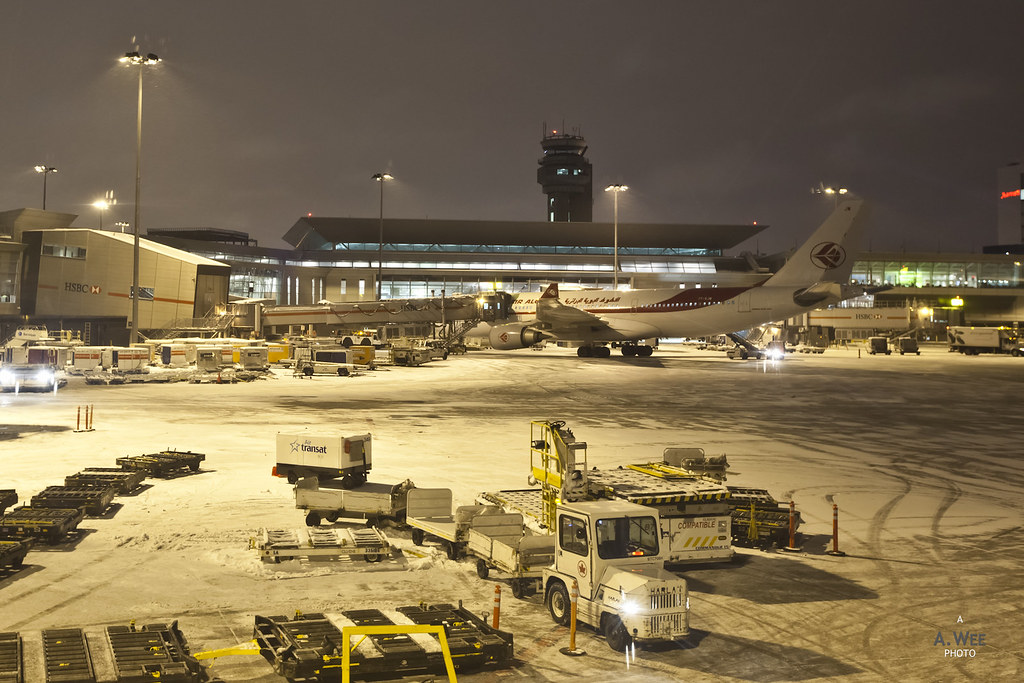 After the completion of boarding I got to experience the first de-icing. Since it was snowing quite heavily the past few days and it was still snowing on the day I departed Montréal, the plane was dusted with snow and thus all planes have to go through the de-icing station. This was the primary cause of the delay, even though the process was very organized with 2 de-icing stations before the runway. 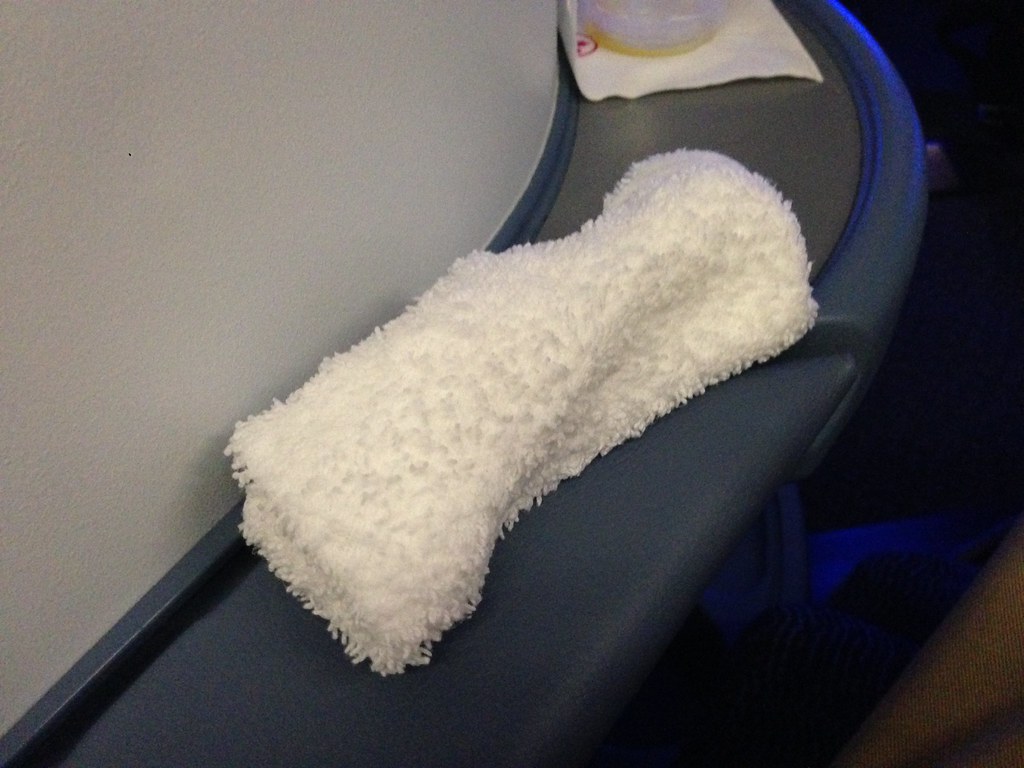 Thus it was more an hour after our scheduled departure before we took off, and upon reaching cruising altitude, the cabin crew came around to bring us hot towels to wipe our hands and another crew took our drink orders. I asked for cocktails and managed to order just a mixture of ginger ale and orange juice. Initially I wanted a re-creation of a mocktail I had but they did not have mint so I left it at that. 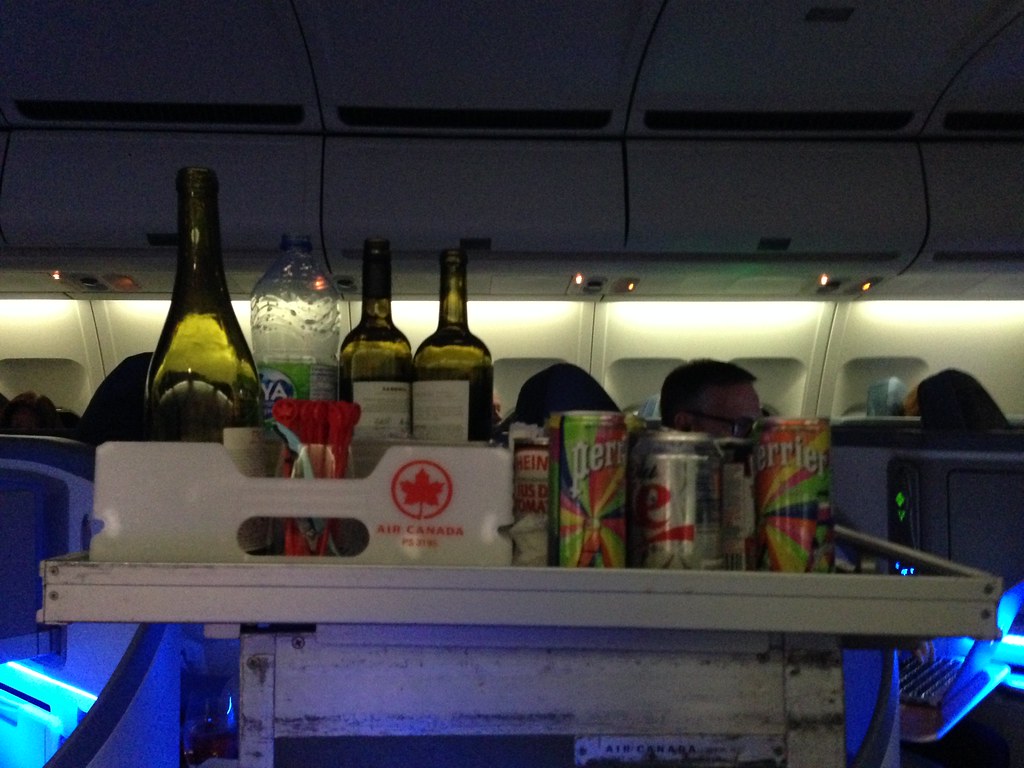 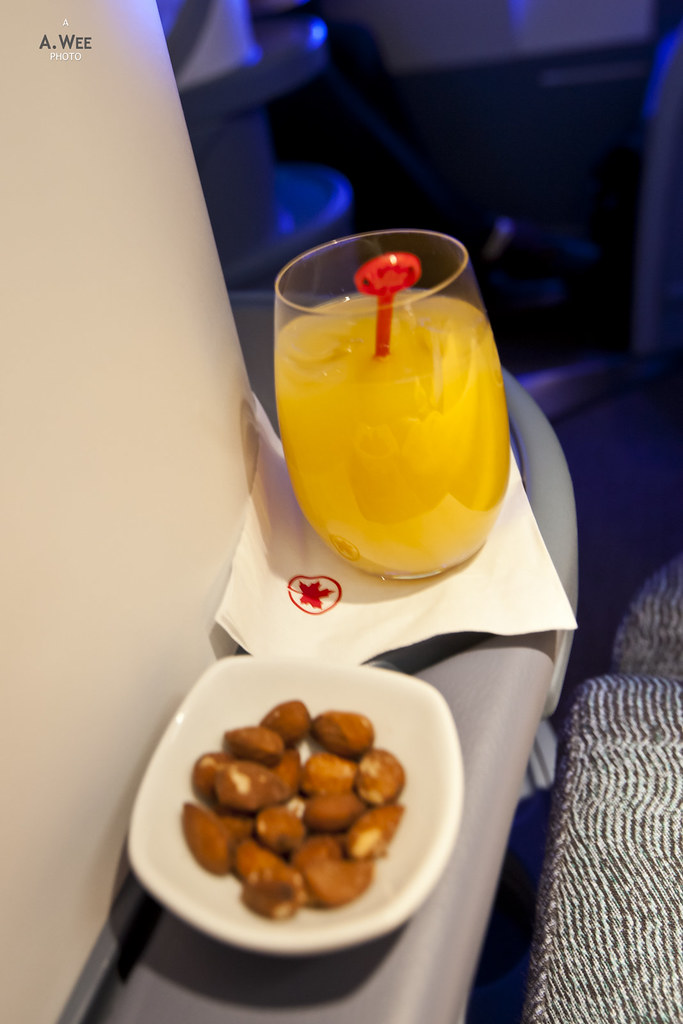 The cabin crew came around with my drinks and a ramekin of nuts, cold ones this time and I got around to watching movies on the enRoute entertainment system. They might not hold up against top tier systems offered by Singapore Airlines or Cathay Pacific, but definitely is amongst the best in North America. The selections even comprised of HK movies which caters to passengers on their Hong Kong and China routes. 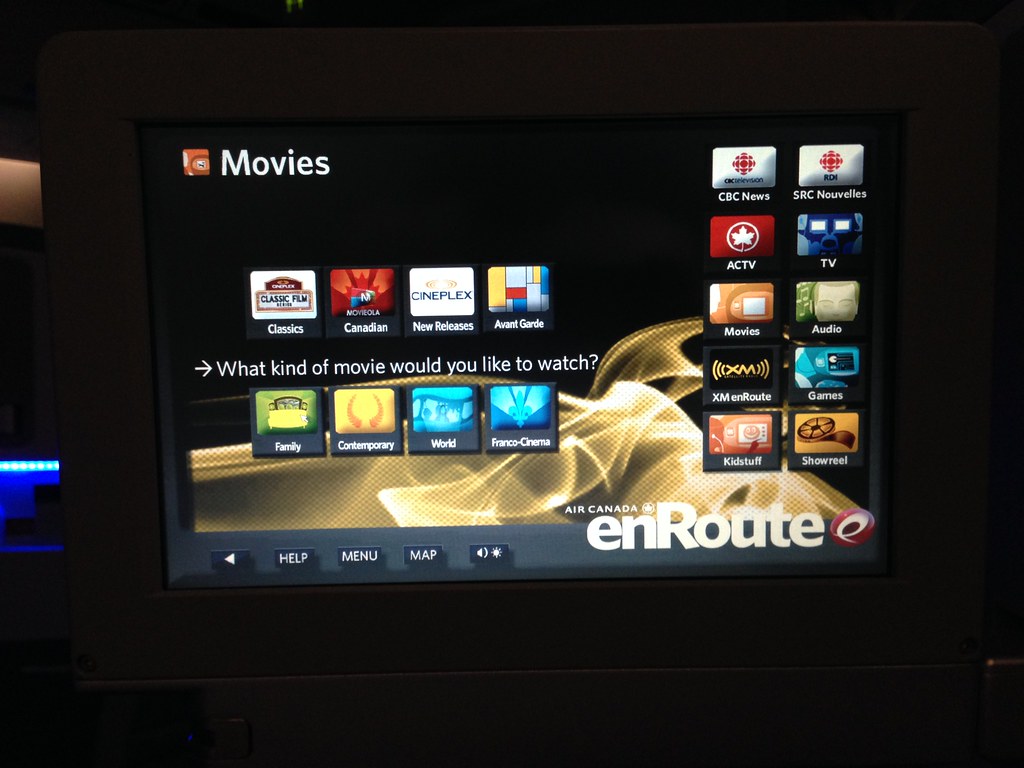 Movies selection on the enRoute system

Dinner menu for the flight was actually placed in each passenger seats and the crew had come around to take passengers' dinner order while waiting for the de-icing before take-off.

Surprisingly I was able to pick the beef tenderloin for the main course which I surmised was not that popular during this flight. I was first served the appetizer of mesclun salad and was given a choice of bread as the crew came around with the basket. The presentation of the meal was impeccable for a business class flight and the simple salad does the trick as well. 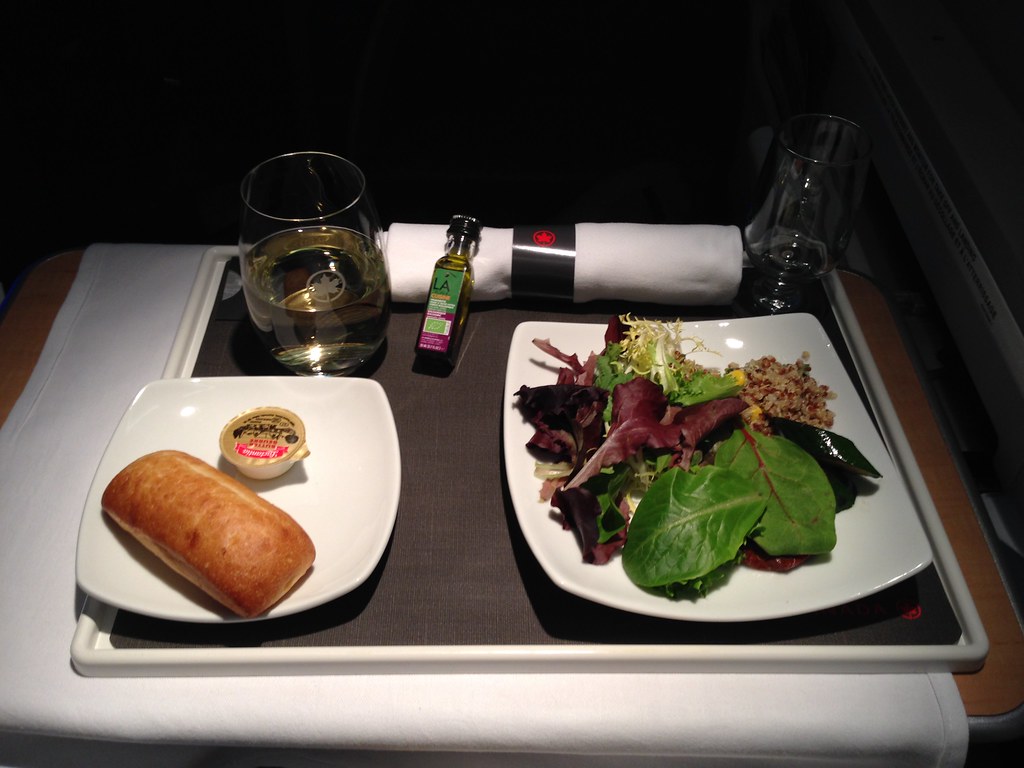 Salad and bread for appetizer

The beef tenderloin meanwhile was not as tender as I expected and felt more like a cheap braised fillet of sorts. I should have went with the chicken or salmon on hindsight. At least the potato gratin was quite nice. Needless to say I did not really enjoy the main course and ended up waiting for the dessert service which took a while that I dozed off because I was quite tired during the flight. 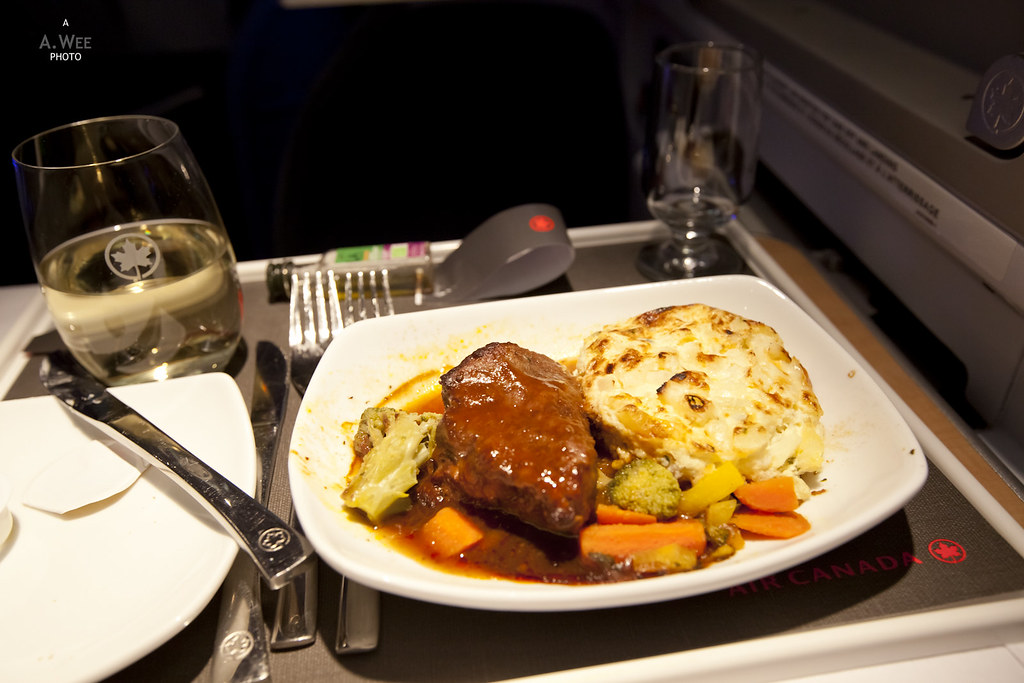 Beef fillet tenderloin with potato gratin as the main course

Somehow, the flight attendants just cleared the tray and would not wake passengers up, but fortunately I woke up before they finished with the meal service and was able to flag down an attendant for my ice cream and cookies. The chocolate chip cookies were of the crunchy variety and they really became the star of the meal as I asked the crew for an additional serving which they gladly gave me. 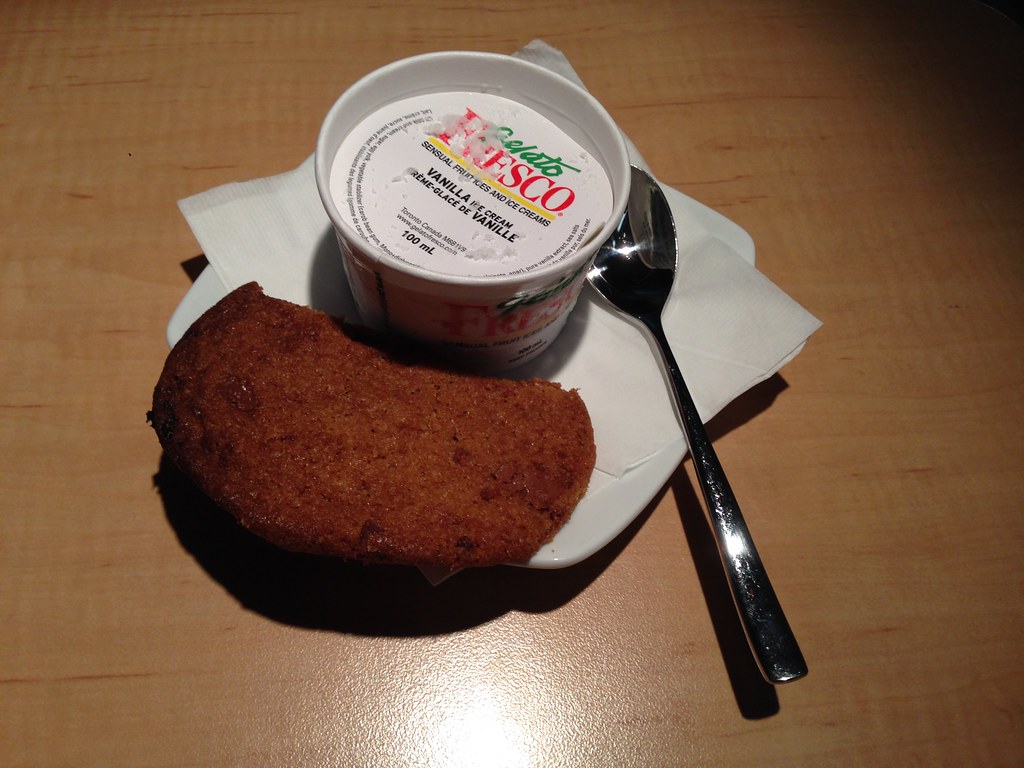 Generally the meal service I found to be quite slow and not what I would expect for a business class cabin. Flight attendants also seem to take a long time to respond to the call button and neither were they responsive or attentive to topping up drinks. It was definitely a better experience on my outbound flight. 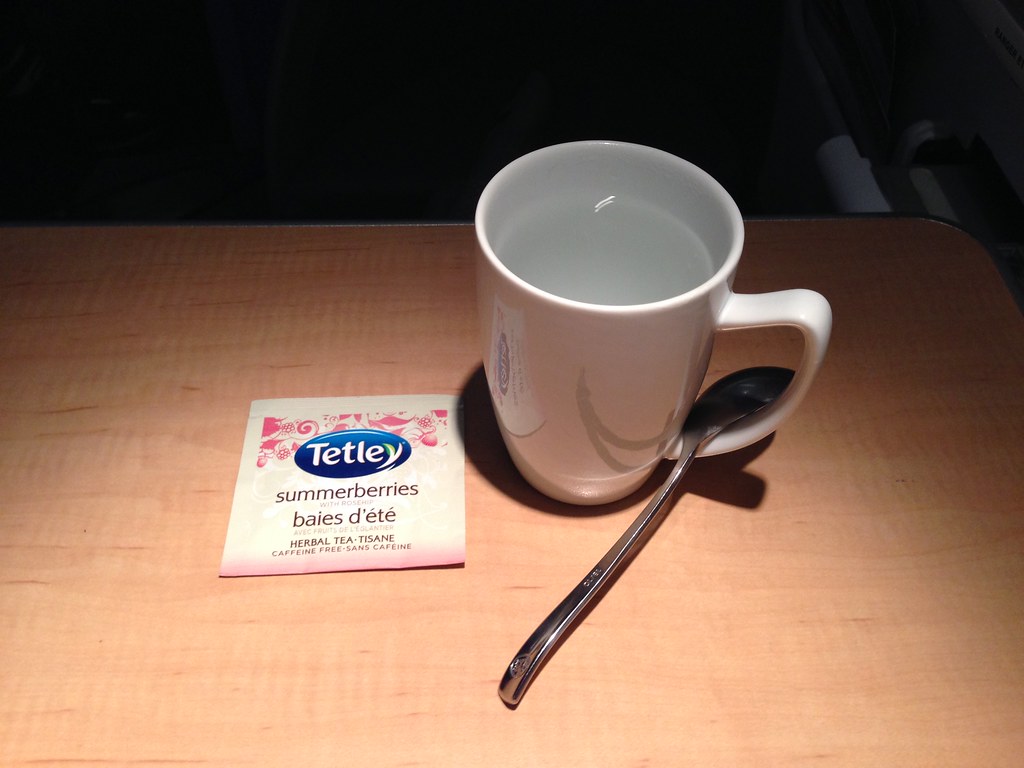 At the end of the meal I also requested a cup of tea to warm myself up and also took the time to check out the snacks basket that was set up in the front galley. 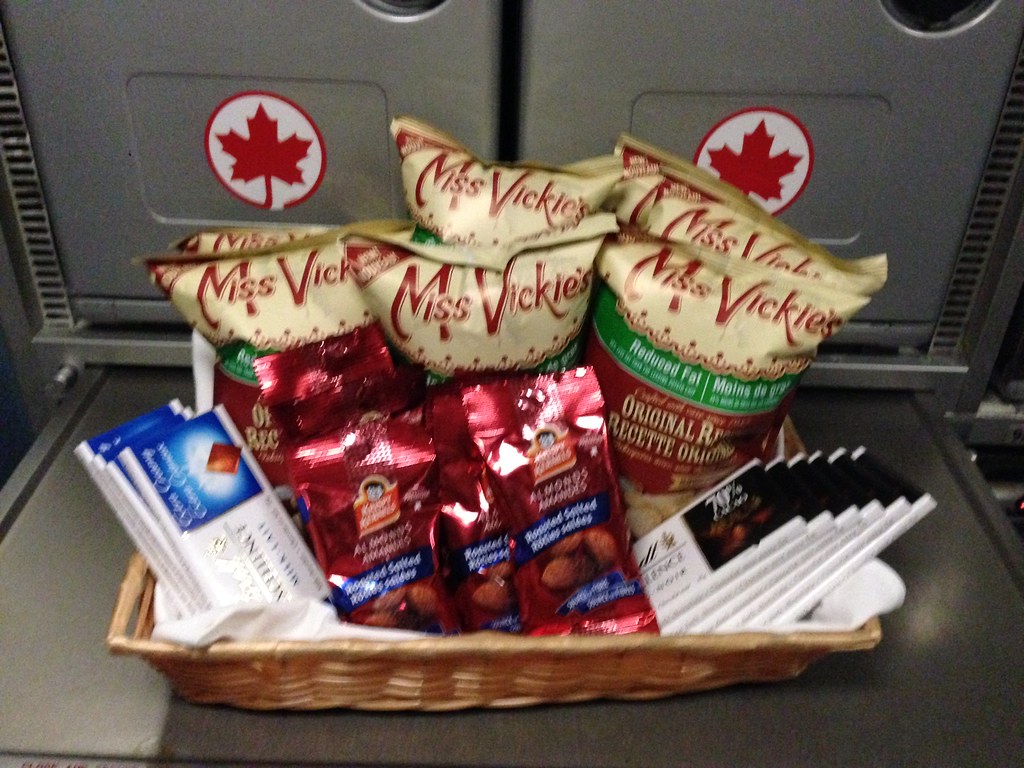 Snack and chocolate basket in the galley

We still had another half of the journey to go before we arrived and I had completed my movie by this time as well thus decided to go for a short nap. I reclined the seat to a full flat bed and laid out the comfortable duvet and blanket over the seat before settling down. I managed a relaxing nap of slightly more than one hour before I was awoken by the captain's announcement of our descent. There was not much else of a service as I set the seat back upright and placed the duvet and blanket behind the seat as most of the passengers in the cabin did. 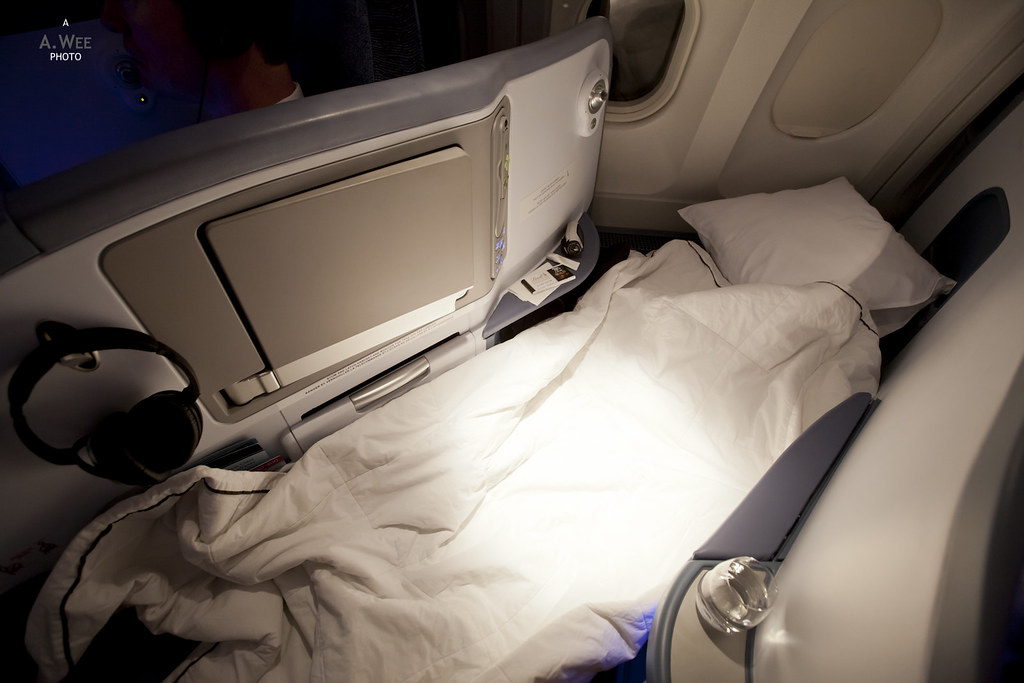 Seat in bed mode with duvet and blanket 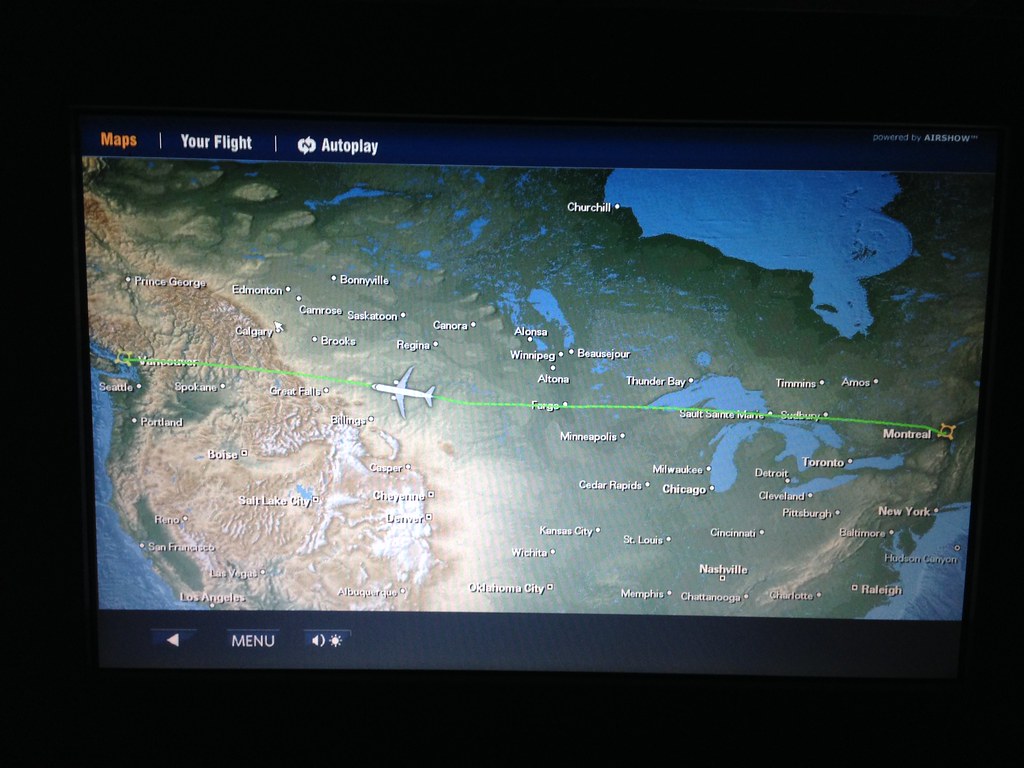 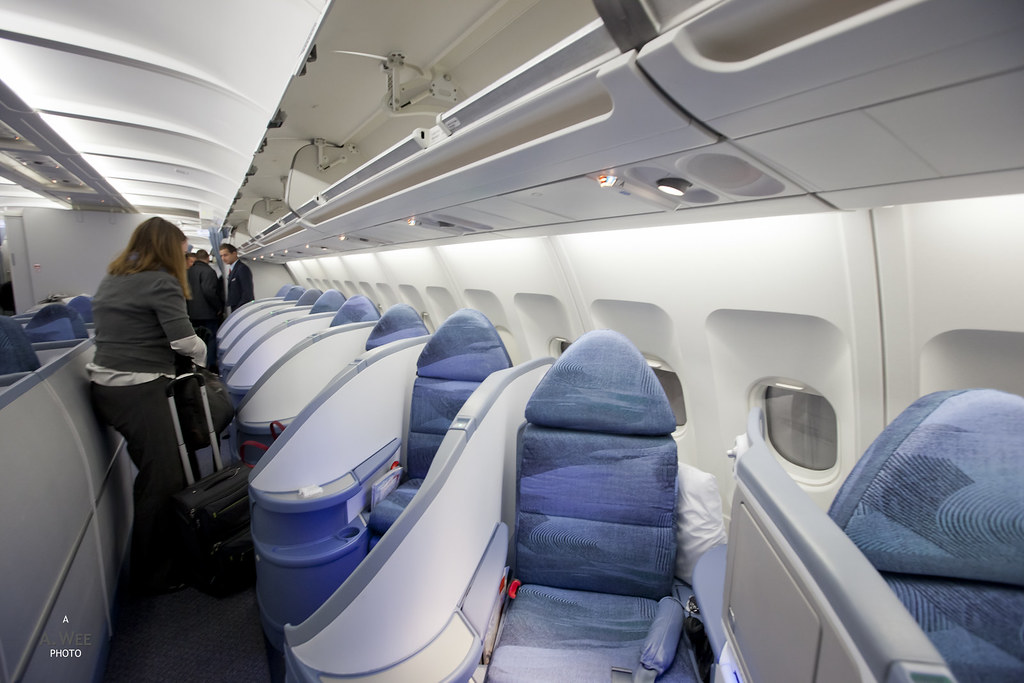 Last look at the A rows in Air Canada's Airbus A330

Landing into YVR was a direct approach and there was no circling in the skies that night. The clear weather also meant the same scenic descent as the lights at the top of the Coast mountain range were visible. After disembarking the flight as a domestic passenger, I took some time to take photos in the terminal and even with that delay, the luggage has not yet appeared. 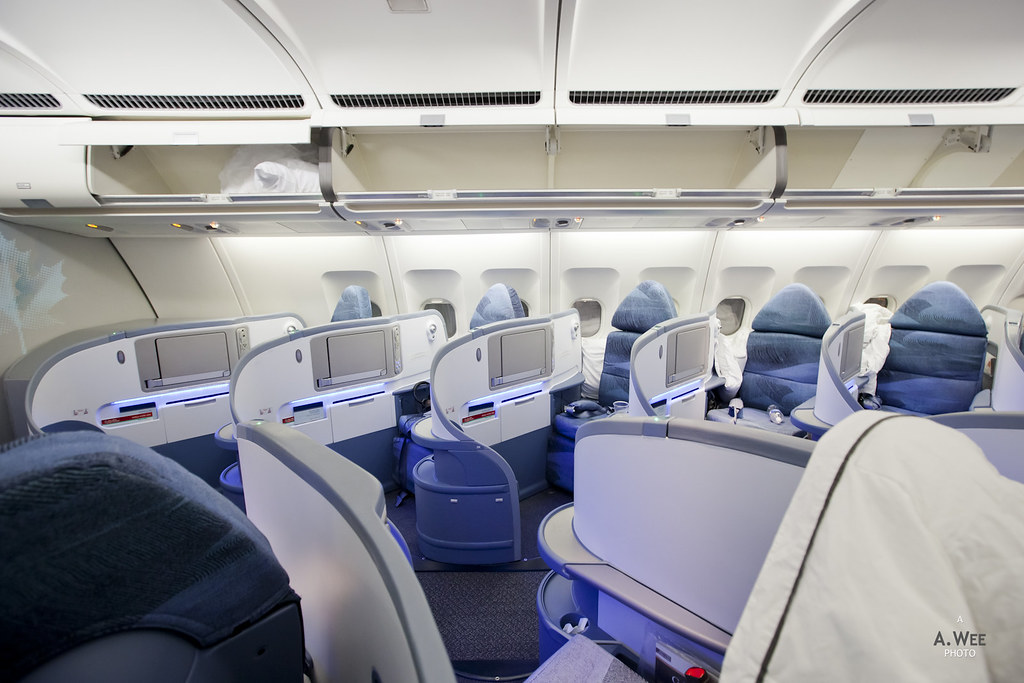 For some reason, it was quite a chaotic situation for the luggage on the domestic arrivals. This was similar to my past experience on the Air Canada flight between Toronto and Vancouver. I guess that is probably another incentive to bring a roll-aboard for these domestic runs! 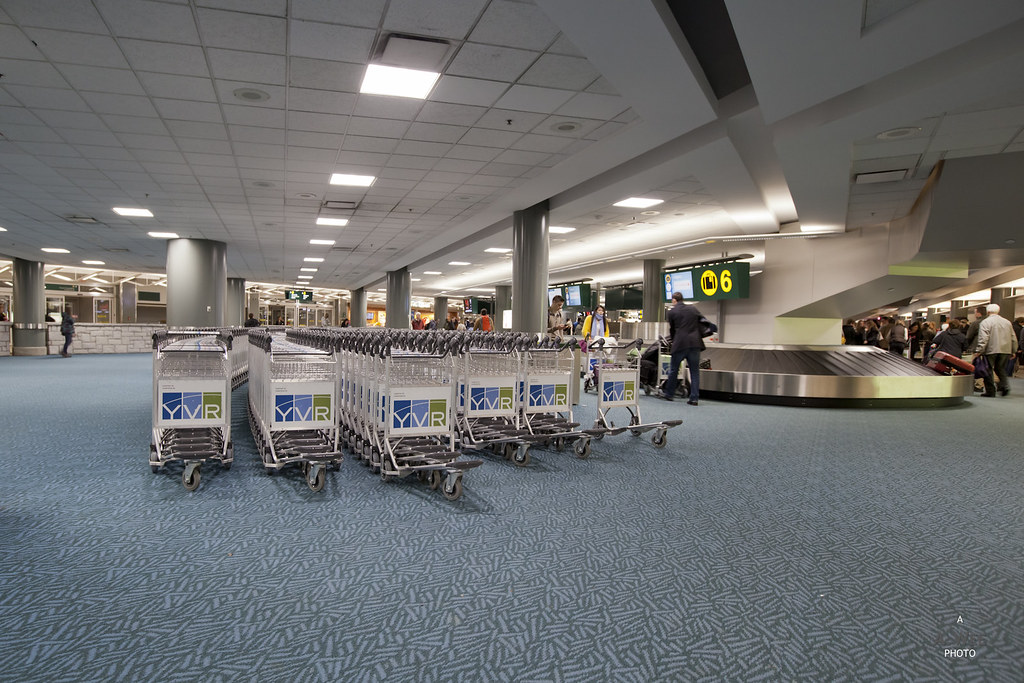 This flight experience was bittersweet to say the least, since it was an award redemption, I did not feel that bad paying for the tickets but the check-in and boarding experience, the service attitude onboard and the slow wait for luggage meant it was made more tiring. At the end of a leisure trip when one is feeling tired, this is multiplied and that is probably why Air Canada is a decent airliner but is not a great one!
See more

The contributors of Flight-Report published 3 reviews of 1 airlines on the route Montreal (YUL) → Vancouver (YVR).

The airline with the best average rating is Air Canada with 7.4/10.

The average flight time is 5 hours and 13 minutes.