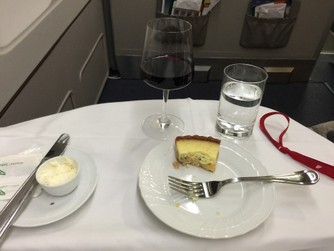 By giancarlo330 7444
Published on 14th August 2015
Hello everyone! Back again on a very rare report following a trip from Toronto to Rome on the tacky old ex AirOne Airbus 330 (EI-DIR) on Skyteam livery operating for Alitalia.

I booked this ticket as a Flying Blue award a couple of months ago and of course it showed the new AZ 330 configuration so I had the ''luck'' to choose 3A , a solo seat by the window…everything happy and joyful for spending 62,500miles towards this Skyteam award. As Alitalia has got used to us they just changed the aircraft a couple of weeks before departure to one of the two tacky charter configuration A-330's that are still in the fleet…sadly by transit times coming from Lima on United I had to keep this booking and just planned to send a complain to KL about redeeming such amount of miles for a more like Premium Economy product instead of a real Business that I hope everyone will agree is just unacceptable to be offered on 2015 for a transatlantic route.

Check in opened 4 hours before departure, no one care to inform me that the airplane was delayed for 2 hours because of a late arrival from Rome. KLM lounge was assigned as it is usual for a Skyteam partner and after many times having visited this lounge I knew perfectly what I was expecting. 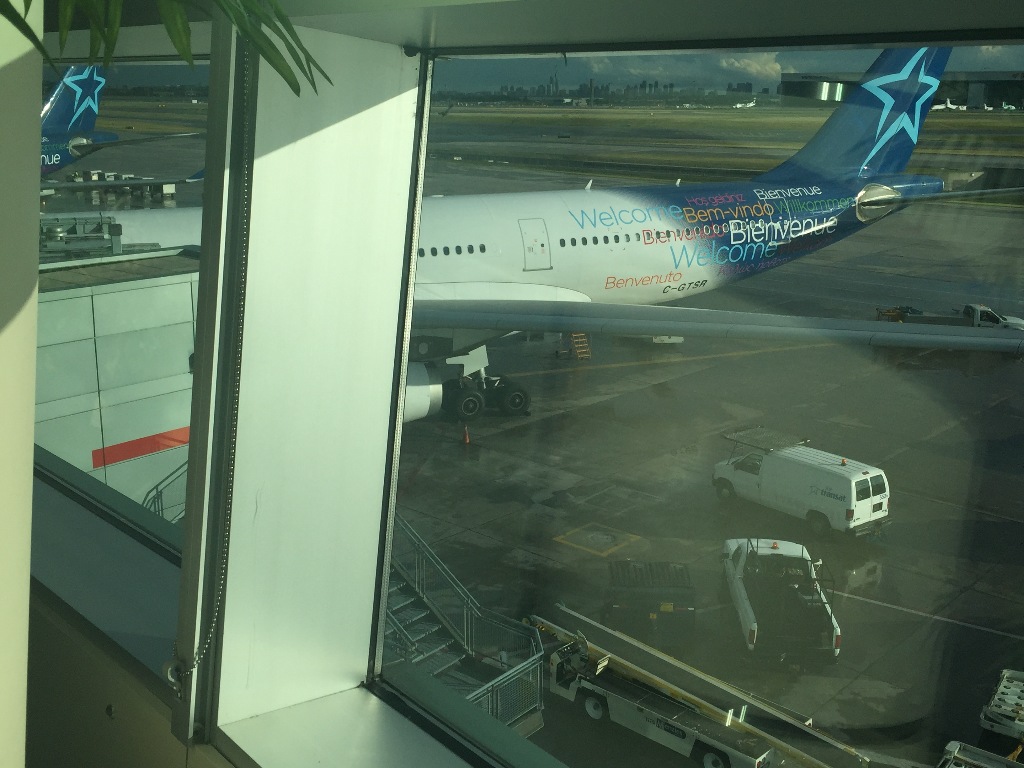 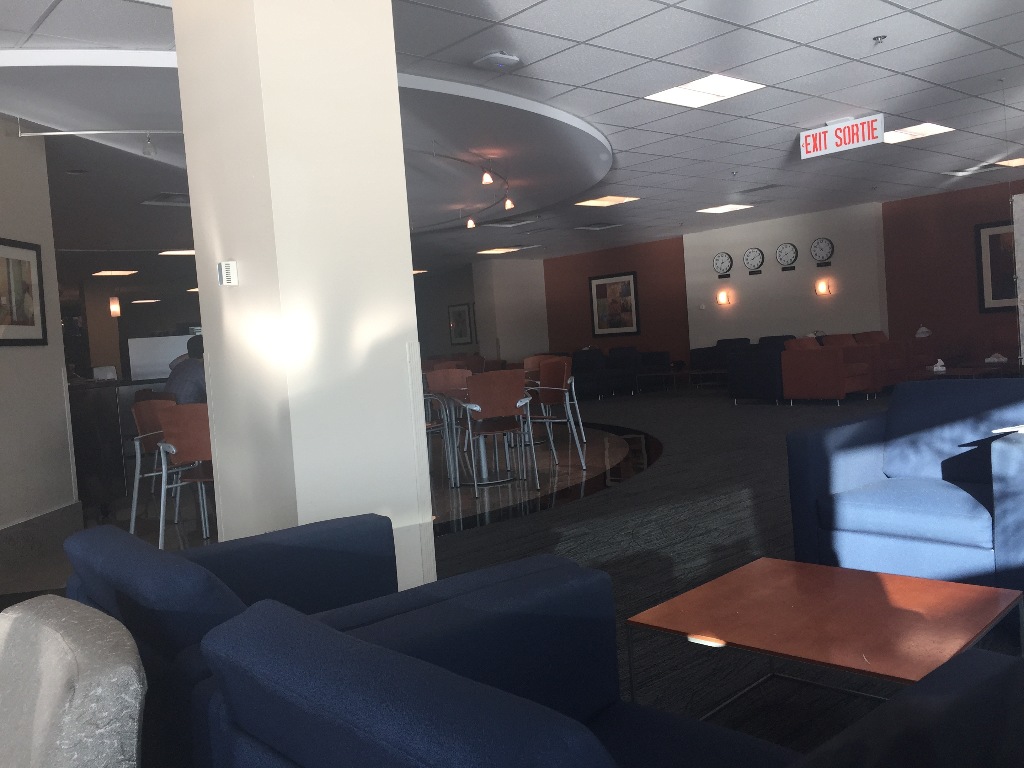 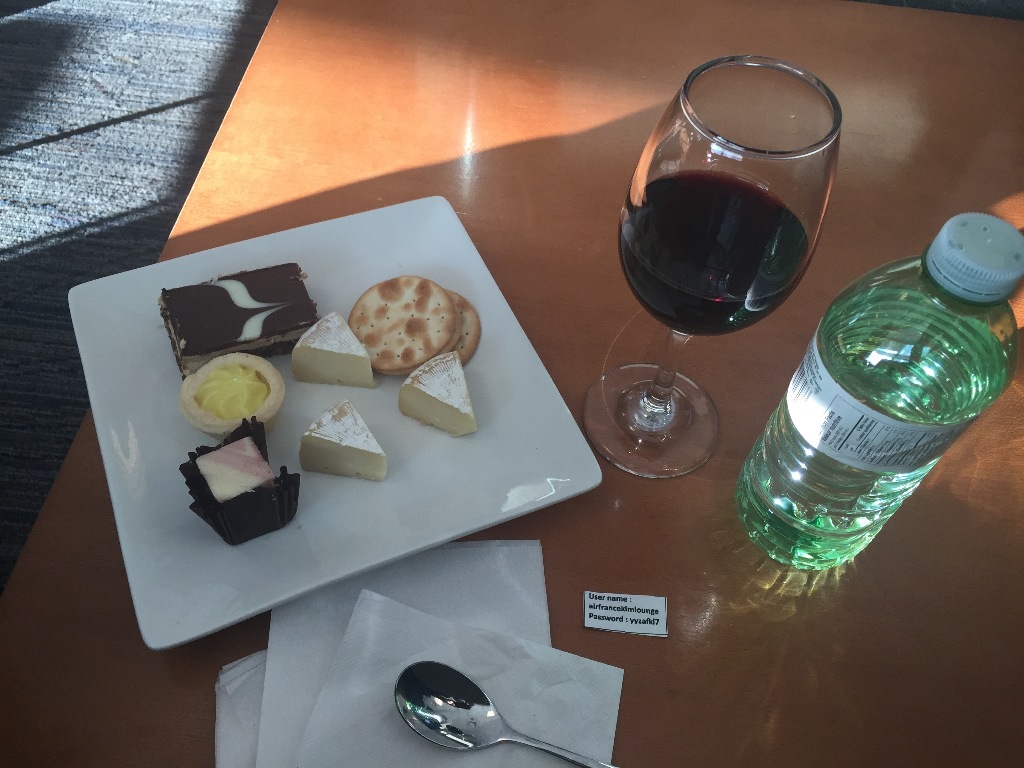 Someone said airline lounges are all about class? :P 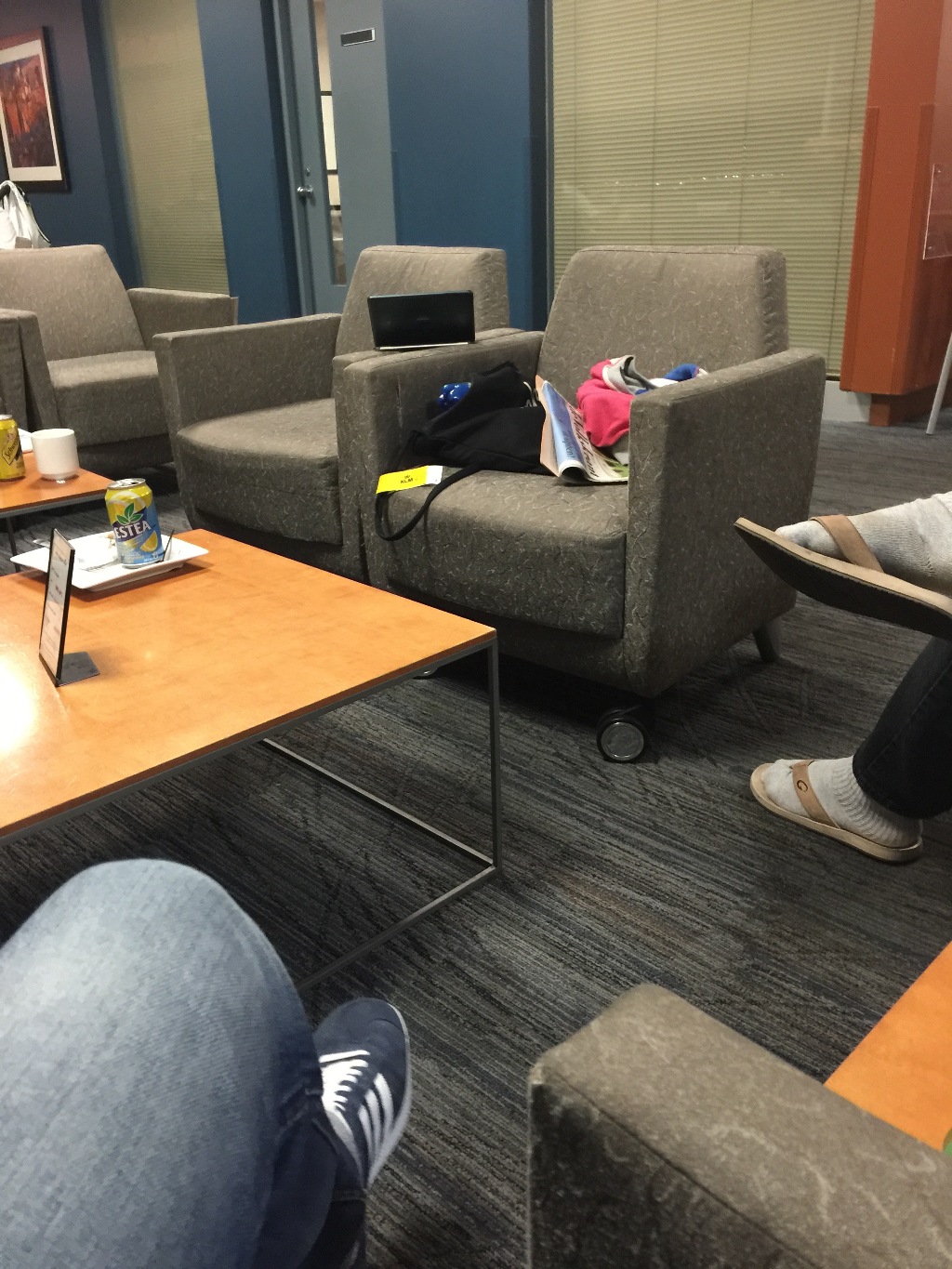 After 1:30hrs of delay we were called for boarding. Flight was completely full. I was feeling a bit sorry for all the regular passengers that were not aware of the kind of airplane they were going to fly with. Alitalia keeps advertising on how good is their Business Class, Economy with new seats and IFE…and then you come into this??? I was trying hard not to cry when I finally saw the Business Class from the 767's AZ 90's era in person…here and now in 2015! 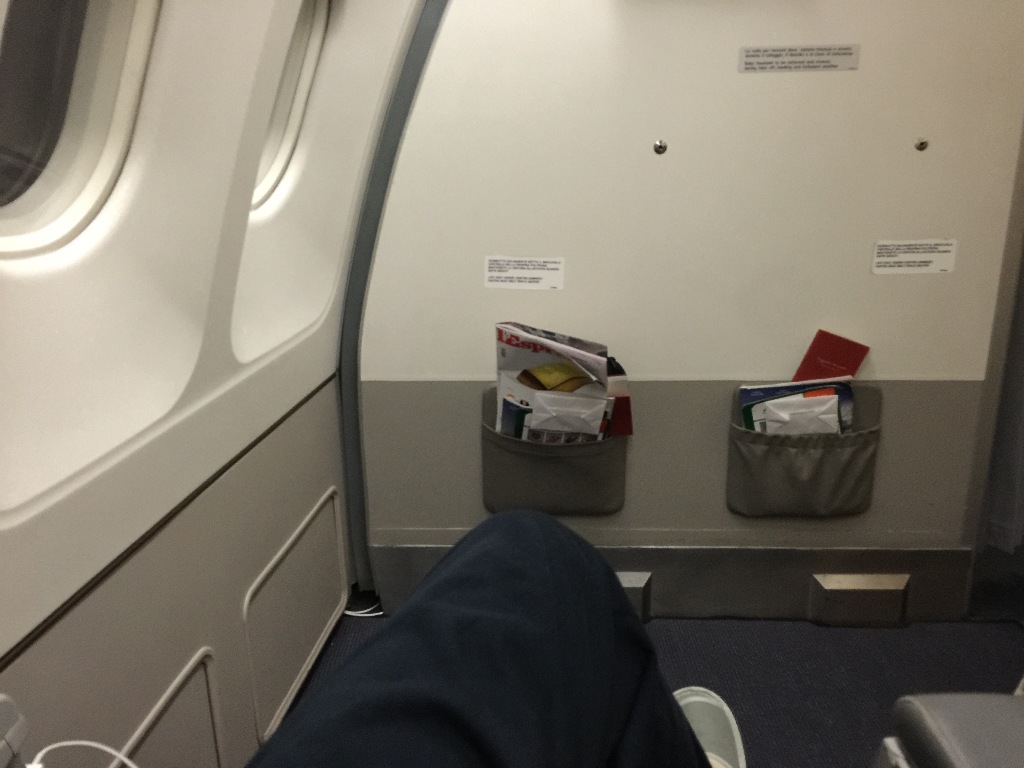 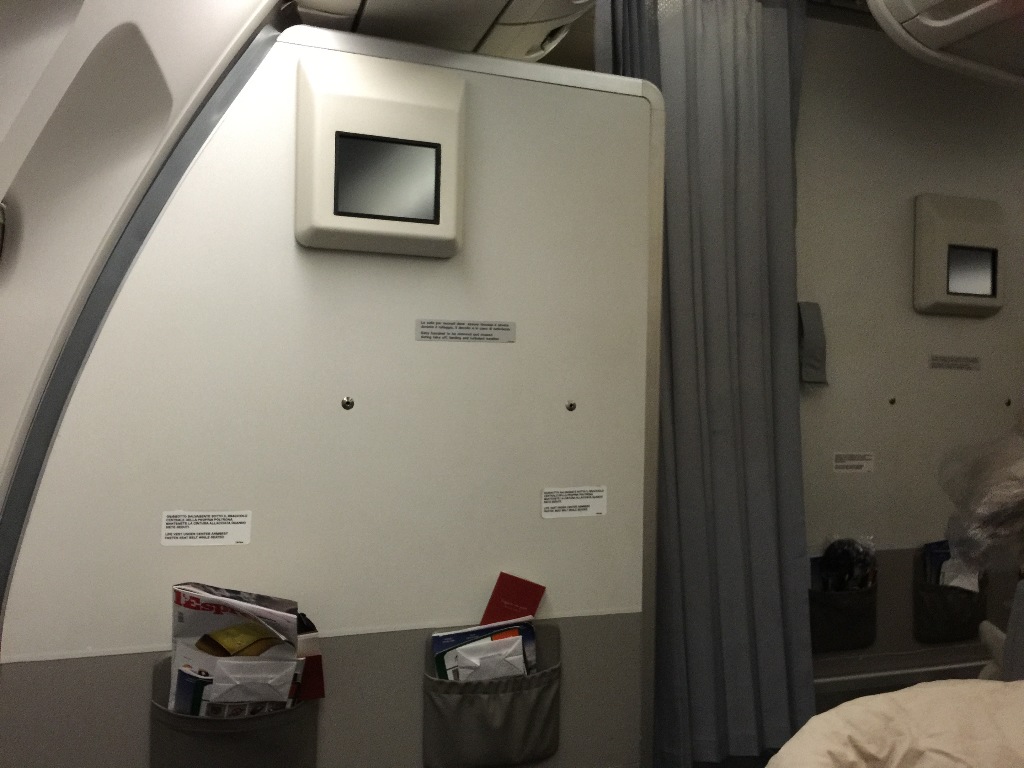 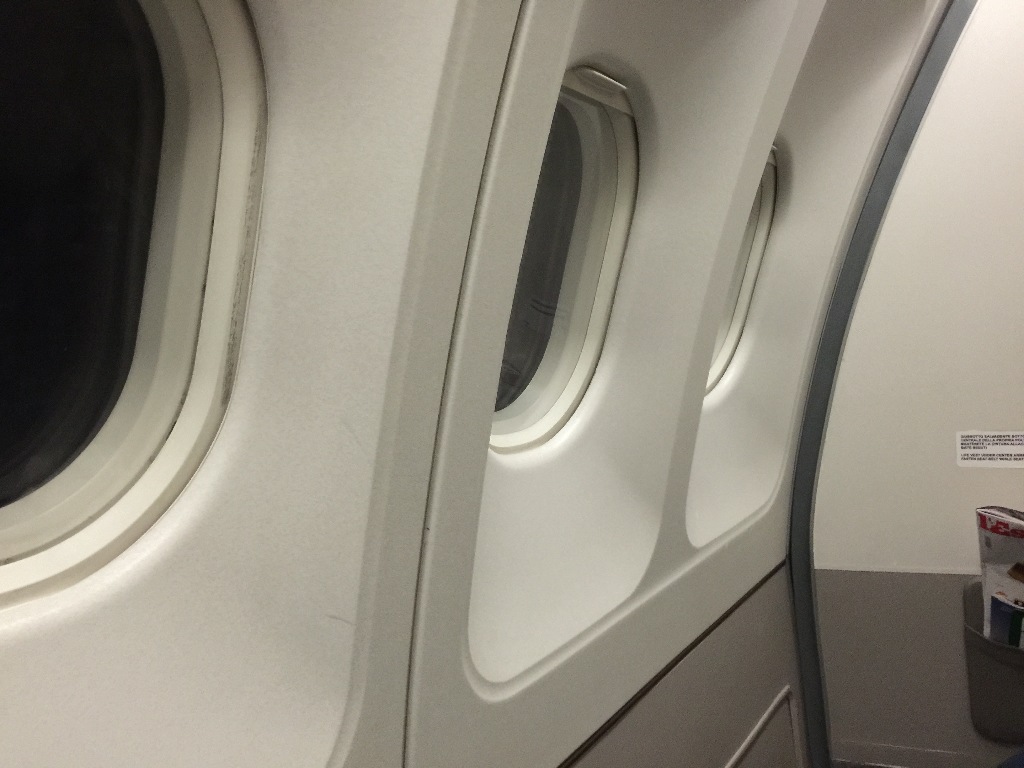 A very nice canadian/italian lady was seated next to me and we talked in italian about the airplane. Everyone was terrified from the seats in Magnifica. She was traveling with her two kids and her mother…she told me she spent 3000EUR for each for a return ticket to Italy… I was like…well I am very sorry for this, feeling totally ashamed as an italian for the product offered specially to Toronto and Boston.

Take off was quick and finally airborne. My aisle was served by a very senior flight attendant. He was efficient but not over friendly… that is Alitalia once again…service and dedication is not part of their job and it doesn't come on the contract of the long haul crews. This has been widely discussed here with other fellow reporters so this is not new to anyone. 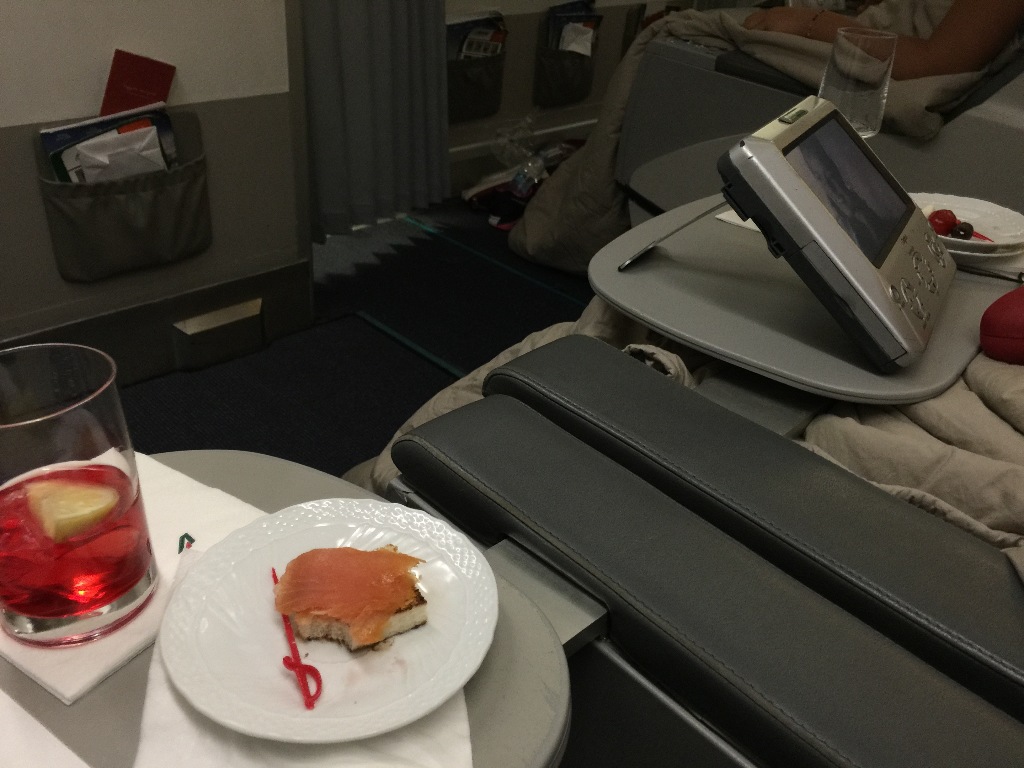 Dinner service started after 1 hour from take off. The menu looked just OK, it was supposed to be dine anytime protocol service following the merge with Etihad. This was not clearly offered and it almost was a regular dinner service with the lame and uninterested service of Alitalia as we know it. 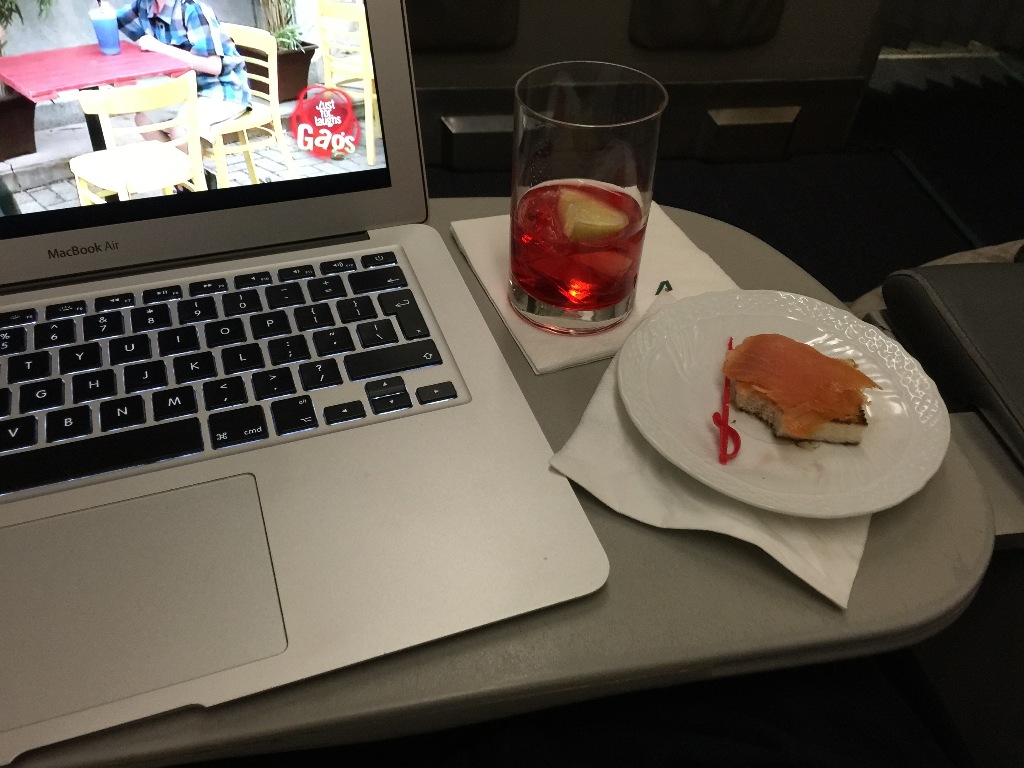 Main course was a plate of pasta with tomato sauce…again quality and quantity was mediocre. I prefer the cart service to your seat as you could decide what you wanted and how much you wanted instead of a pre served dish from the galley.

Wine refills were not offered. Scandal for J class.

So sleeping time! Now this seat reclines aprox 150 degrees…virtually a NEV3 seat of AF. It had the slide effect the whole night, temperature was too hot and too cold, horrible sleep and after many nightmares we woke up for breakfast.

I asked for an orange juice (fake from a box again in J and even after EY merge) and espresso.

Landed in Rome about 1 hour after schedule and had to go through all the chaos of Rome Airport. I just can say it is a disgusting old and third world terminal. We deplaned via bus, terminal 3 immigration then another bus which we had to wait 15 minutes under the hot weather on the tarmac to finally get into the Schengen terminal…what a mess! Alitalia and Rome Fiumicino play very well together that is for sure!

Once again Alitalia still delivers poor service and an underwhelming product across the Atlantic. Crew was polite but without any sense of service or trying to be friendly. It is a shame that they can try to invest money into an airline that what it needs to be done is to lay off most of the crew and hire real fresh new people with real commitment to serve and not persons that believe they own the airline and they are just there for 'safety' or because they need to in order to operate the flight. Of course after the meal the crew vanished and never came back again only before breakfast for arrival. A new snack on demand service was offered (Spuntino) on the menu but it was not really offered by the cabin crew or seen at the galley by chance during the night.

I have a clear idea that EY got into Alitalia just to be a feeder for their flights towards ME,Asia and Australia and increase their presence in Europe hence no interest whatsoever for a real change or improvement of services. AZ is a mess and will always be , I've had 3 flights this year with them and the issue is always the same...horrible and lazy crew, a terrible hub like FCO and seems that the new ''on demand'' dine anytime service is just a cost cutting measure for the pockets of the management.

It is criminal to offer a product like this and then feature the new Magnifica Class which has been around for many years now...this is a scandal!

This was and will be the last flight I will ever take on AZ. Promise!

Thanks for reading everyone!

The contributors of Flight-Report published 4 reviews of 1 airlines on the route Toronto (YYZ) → Rome (FCO).

The average flight time is 8 hours and 37 minutes.