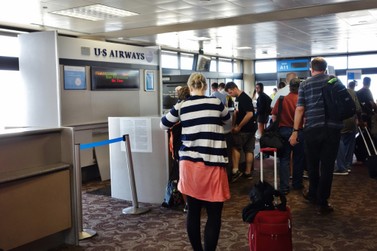 Review of US Airways flight Phoenix → San Francisco in Economy

By jetsetpanda 1547
Published on 30th August 2015
Hello and welcome to the return portion of this short one day trip.

Here is my schedule so far:

During my layover in PHX I indulged in some plane spotting and explored most of T4. Feeling a big hungry I looked for a sit down restaurant and here is my first discovery - Cowboy Ciao.

According to its website, this restaurant specializes in modern American cuisine with a Southwest accent and global influences. It has a branch at T4 and one of its signature dishes is the Stetson Chopped Salad, which consists of rows of chopped arugula, couscous, dried sweet corn, a house trail mix, balsamic marinated Roma tomatoes, avocado and grilled chicken (last two items are extra). When I arrived I was greeted and seated right away, and a friendly server took my order. I ordered their signature salad and upon being presented, one of the staff members offered to mix it for me. I thanked him but opted to do that myself. Isn't it always more satisfying when you make your own mess?

The salad was delicious with a combination of textures and flavors that complemented well with each other.


Afterwards I did some shopping and was specifically looking for some magnets to give as gifts. I visited several stands that offered the usual kitschy assortments and skipped them altogether. One of the worst things that I ever saw was a mug shaped like a rattlesnake. Finally I stumbled upon a store named Indigenous that featured some tasteful items with a Native American touch and bought my gifts there.

At the Hudson Booksellers I discovered the publication New Philosopher which has some of the most compelling, though provoking and engaging articles that I have ever read from a magazine of this genre. Interestingly the magazine does not feature any ads or glossy pictures with anorexic models, which sets a refreshing tone. Some might find the magazine too cerebral, but in a country bombarded with prevalent shallowness and crass propaganda from its media, this publication offers a ray of hope for those that do not want to join the cognitive conformity of the masses.

Tucked with a pair of magazines in my bag, I head to the gate taking comfort that my flight will now be shorter and much more bearable. At the gate I could sense the excitement of some people heading to SFO, a nice city that I call home. However, SFO these days is not what it used to be.

Last week there was a report of an assault at a Rainforest Cafe by Fisherman's Wharf and not too long ago a young woman was killed from a stray bullet while walking with her father near the area. There is also the problem of homeless people everywhere in downtown and let's not mention the skyrocketing rents. I read a report about the exodus of qualified teachers because their salaries can't keep up with the high costs of living here. I'm afraid that the only people that can eventually live in this city are the top 1%, the techies and the rich overseas investors who purchase houses in cash like buying candy in a store. I guess change is the only constant in life. So enjoy San Francisco if you are visiting, but if you are planning to live here I wish you good luck.

Did I mention that it was 102 F (38.89 C)in PHX? I guess that is why the airplanes parked at the gate have this cockpit shield cover and the windows are shut. It's not uncommon for FA's to ask passengers to shut the windows on arrival in order to help cool the plane.

Here is my airplane at the gate.


The gate where my flight departed was at the end of the concourse and there were 4 other gates in that little area, so it felt crowded.

Boarding was orderly and once again, I boarded with group 5. The plane on this segment was a little bigger and there were a few middle seats open in my area. The FA assigned to us was smiling and friendly. There were 2 UA pilots that sat in the row in front of me and my neighbor by the window seemed like a nice lad. When I checked the seat pocket it was filthy with used napkins. I did not dare put anything inside and instead used the pocket of the seat next to me which was empty.


Once again a beverage service was offered after take off. I got some nuts with fruit mix for USD 5 which hit the spot.


Soon we were descending and we arrived earlier than expected at 18:47 instead of 19:06.

I took this pic of the plane at the gate.

Another good experience on a short flight, just like on the outbound.