By Alexisonsmith 4963
Published on 3rd October 2015
A classic match up between the two best European carriers. Lufthansa vs. Swiss. I was not originally going to write this report, however when my Lufthansa flight was cancelled(Due to the wonderful pilot strike) I was left with a 16 hour indirect Business class option or Swiss First Class. As most know, A few years back, Swiss First Class restricted their First Class to only their elite members making this impossible to get through points. Aim of this report is to compare the two airlines and see which one comes up on top.

Both flights were fantastic and the differences between Lufthansa and Swiss was very close. Take your bets now as to who comes up on top !

YUL made some great improvements to the airport in the last couple of years and now is much nicer to transit through. It took all of 10 mins to pass security. The international part of the terminal now has some decent restaurants with a microbrewery(Archibald) and wine bar. The Microbrewery has pretty good local beers and it much more enjoyable than the MLL which seems always packed early evening.

Boarding started on time and we were first on board today which allowed a quick couple of snaps of the cabin. 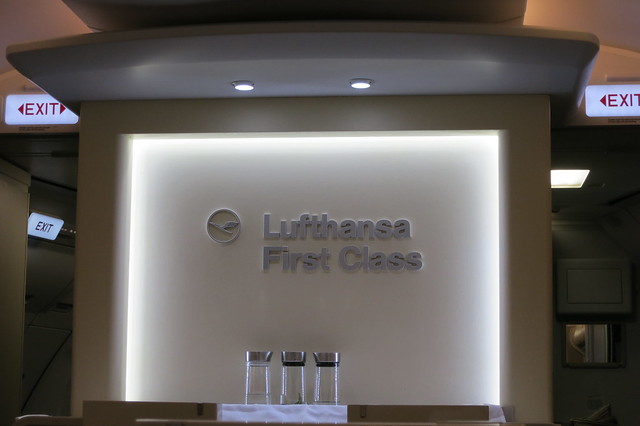 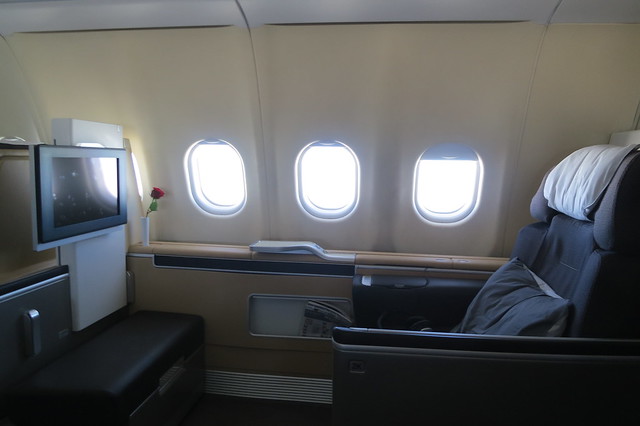 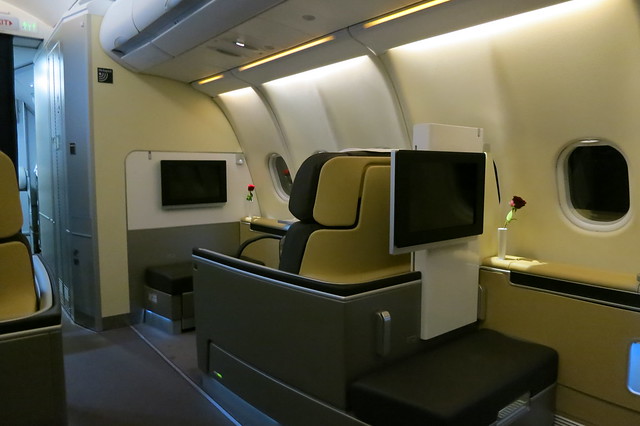 
We started with a glass of Comptes de Champagne Taittinger Rosé 2006. I was told Lufthansa only had a 150 bottles of this Champagne. It was a fantastic start. An amuse bouche was served of smoked watermelon and buffalo mozzarella. Yes SMOKED watermelon. It tasted surprisingly good. However I wish Lufthansa would not experiment with food. At least this usually only happened with the amuse-bouche. One bottle of Rosé later and the only other passenger arrived. This was going to be a great flight ! 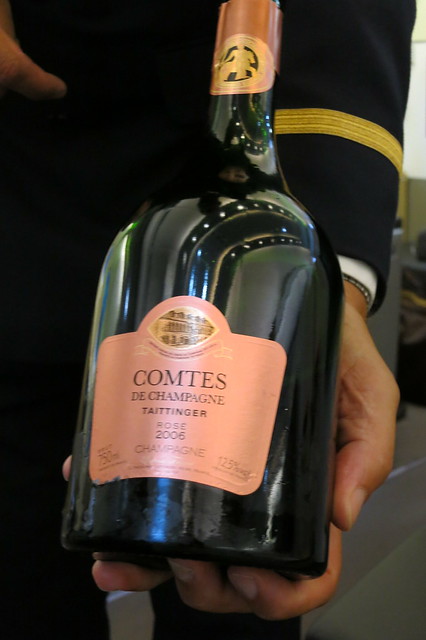 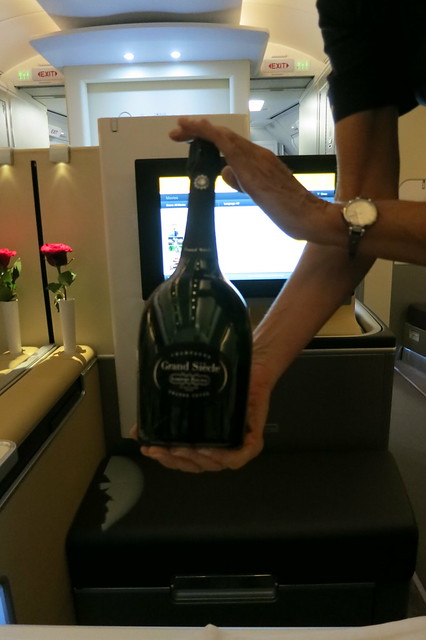 The menu was as follows :

We started with the caviar( Sorry no pic !)

Then went for the three appitiers. The smoked chicken and shrimp cocktail were great. ‘The Spicy Sofrito with Rice and Nori and Wakame Seaweed ‘was really just a ball of rubbery rice. 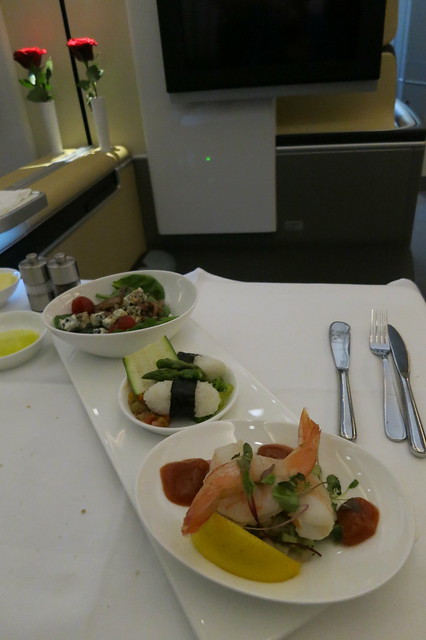 For the appetizer both my wife and I had the Petite Surf’N’Turf. It included shrimps, Scallops and a great steak. People always complain about steaks on Lufthansa. I found this one perfect. 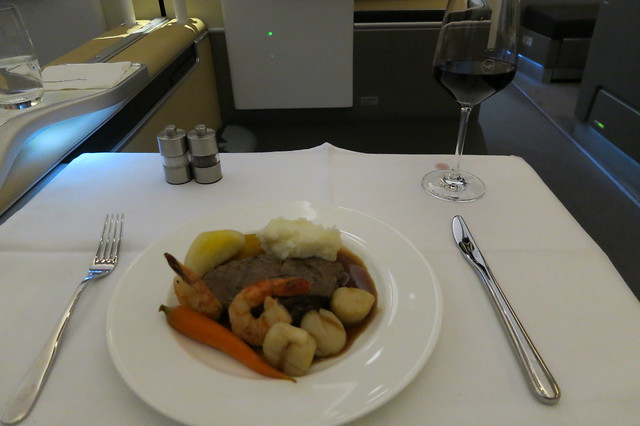 I had a glass (or three !) of the Luce 2008 a beautiful Italian wine with Merlot and Sangioves. 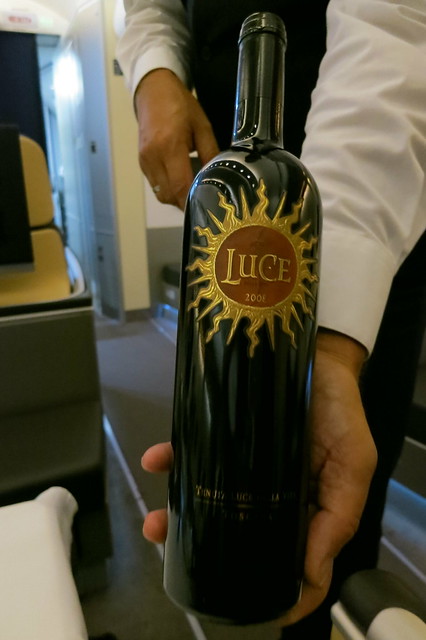 At this point I was more full than full, however with the cheese course and deserts coming up I could not say no ! So I said yes :)

The Cheese was fine, nothing special, however the Brownie with Ice Cream Sundae was out of this world. The presentation was excellent and I was suprised to see how well it tasted compard to previous LH F deserts. Lufthansa are really uping their game in terms of their First Class food offerings and is significantly better than what I experienced a couple of years ago. 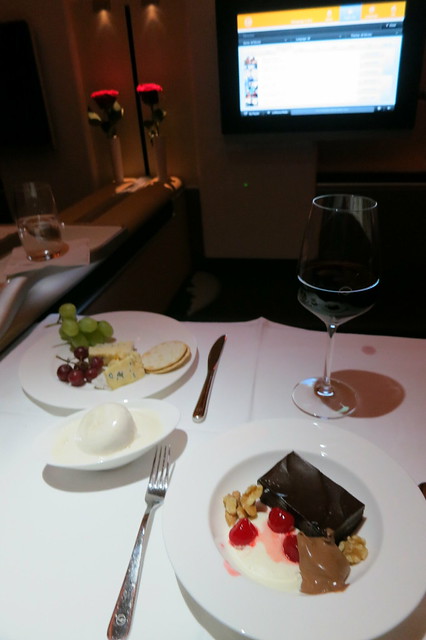 By this point I pretty much passed out due to over eating and after the bed was made I was out like a light until pretty much touchdown. We connected to the main terminal so no car for me today :(

The lounge in Munich is small but well appointed. I actually prefer the overall fell of this lounge compared to the Terminal in Frankfurt, however the food as you will see soon is significantly nicer at the First Class Terminal.

The MUC-FRA flight was nothing special however I was impressed at how a full lunch was being distributed in Business Class, the flight attendants did a fantastic job on such a quick flight.

Believe the hype ! Lufthansa are the best First Class airline which are readily available on points. Is it the best airline in the world ? No. However is it in the Top 10 ? Easily.

In terms of rating I rate Lufthansa for this flight as follows :

Crew : 9/10. The crew were excellent on this flight. I could not say enough good things about them !

Food : 7/10. The food was good. There were a couple of items which just did not make sense ( Rice Balls and Cheese selection)

Champagne & Wine : 8/10 2 excellent Champagnes were served and the red wine selection was excellent. However dissapointed with the Sweet wine choice and White wine selection. (do not have the menu, this is just by memory)

Ground Service : 7/10 ( I had to fight to get into the FCT, not a big deal however it annoyed me enough for the lower rating)

After arriving in Frankfurt I decided I would test the ground service to see how good it was ;) If you read any of the trip reports online you will believe that the Lufthansa First Class Ground Service is amazing from door to door. Well on this trip I found out it was not quite as good as what people make out. Since I was coming off of a Business Class flight even though I had a same day First Class ticket I knew I had access to the FCT (First Class Terminal) however when approaching the agent at the FCL (First Class Lounge) I was told no, 100% not, since I had an onward Economy ticket, and Economy ticket holders do not get lounge access. I then asked where the FCT was (second test), I was informed not to go there since I was not allowed in. I re-asked her where it was and she would not tell me! Lucky I knew exactly where it was however what this shows is that Lufthansa ground staff do not always know the rule. To summarize:

Once arriving at the FCT the experience chaned, I was walked through security within seconds. They checked all documents and I had then a quick tour around the Lounge(Terminal). How good is the FCT? A place I would not get board if I ever had a plane delay of 12 hours :) There is plenty of room and it never felt overcrowded. There is a Bar, Restaurant, Cigar Lounge, Showers/Baths, 2 day beds (which we needed!).

Once we arrived the first stop was the Day rooms. We have a 5 hour layover and were exhausted. The day rooms are well appointed and we both crashed out for a couple of hours to get our much needed sleep.

After a couple of hours of sleep we felt a lot better and so I headed to have a bath and collect my rubber ducky. I think I must have spent too much time preparing the duck for photos as you can see 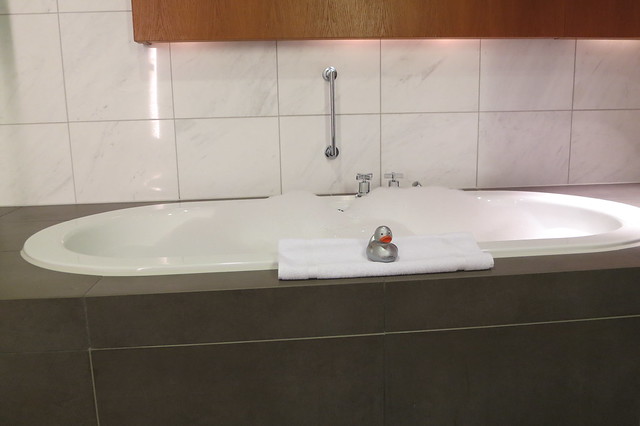 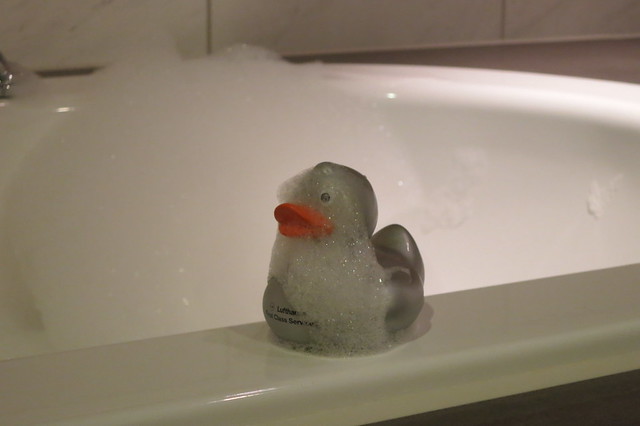 After a much needed bath for both me and ducky headed out to find my Wife waiting for me in the Restaurant. The food in the FCT is catered by Do&Co. The food is to put it lightly AMAZING. The quality of the food makes this lounge one of the top for food in the world. They have both an A La Carte and a Buffet. If going to the FCT I would highly recommend the Wiener Schnitzel. It was spectacular! Also they have 6 different Champagnes as well as an excellent selection of both White/Red wine and a great Whisky selection. If coming to the FCT ensure you give yourself enough time to fully enojy it. Minimum 5 hours :) Here are a few pictures taken inside: 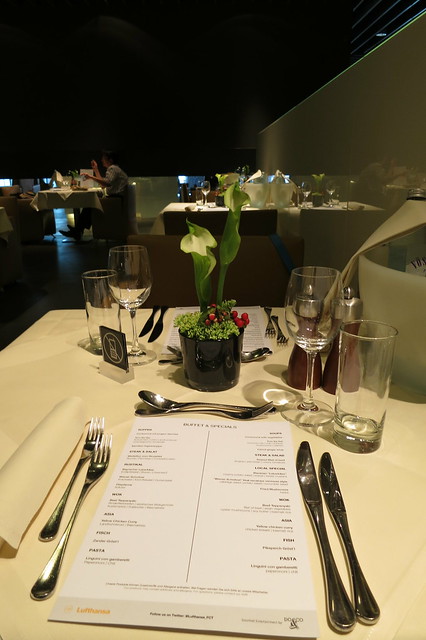 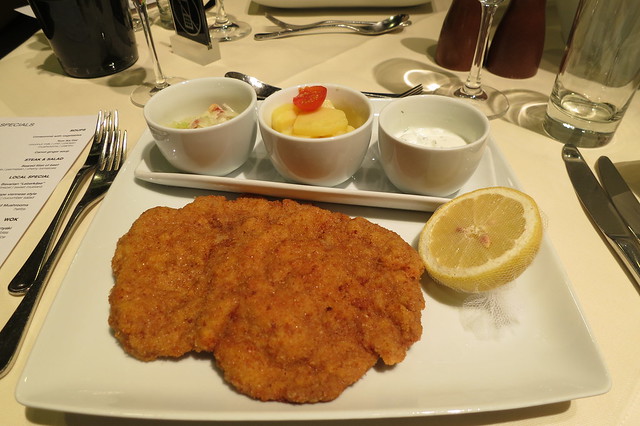 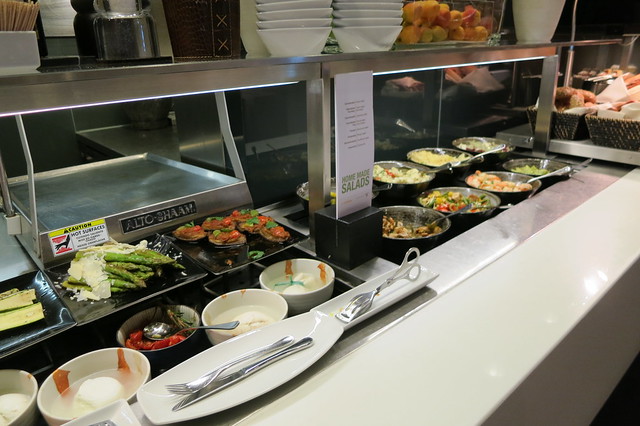 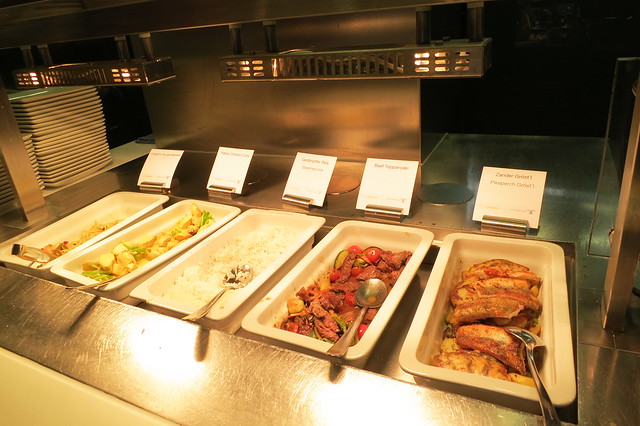 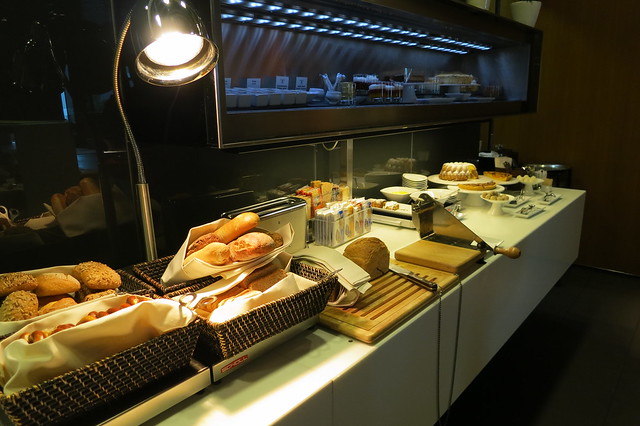 If I had to have one complaint it would be that there is no view, which sort of annoys me since I do enjoy looking out at the different planes taking off. Also it is a little hassle to get to. However these are really 'First Class Problems' 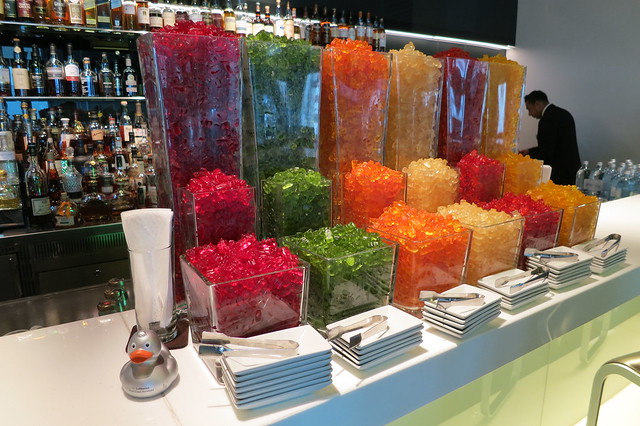 Overall how would I rate the FCT?

The contributors of Flight-Report published 5 reviews of 1 airlines on the route Montreal (YUL) → Munich (MUC).

The average flight time is 7 hours and 27 minutes.