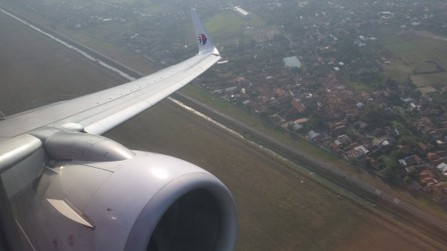 By socalnow 4486
Published on 14th October 2015
Greetings Flight-Report Community. Thanks for stopping by and having a look at this report.

For this report I will be sharing an exciting RTW adventure with several firsts and perhaps a last chance as well.

The reports will be broken down as follows:

Resumption of the report has us taking hte short flight from Jakarta Kuala Lumpur. The combination of First Class, A380, and Malaysia Airlines may not be around much longer so I opted to give it try. I've flown economy on Malaysia and found them to be an above average experience so why not move up to the front of the airplane?!? I used 70k American Airlines Advantage miles to book the CGK-KUL(overnight)-LHR-AMS sectors.

While I did visit two lounges at CGK neither were very impressive. In fact both were dark, run down, and had very limited amenities so I will omit them form this report.

Coming off of the CX flights I wanted to avoid paying the visa fee and remain air side. This procedure was odd in my experience. I was directed to a generic desk which appeared to be staffed by contractors. There were no signs marking it as a transit desk. I explained that I had arrived on CX and will be departing on MH. Some chatter on a radio took place and I was asked to wait. About 20 minutes in another staff, perhaps CX staff, came and greeted me and asked for my passport and MH flight info. She said she would return in 10 minutes. About a half hour of standing there and waiting one of the contract staff offered me a broken desk chair. It was a nice gesture and was all they really had to offer. Finally a call came over the radio asking that one of the ladies at the transit desk walk me to the entrance of the secure area. Here my passport was returned and I was provided an MH boarding pass. I was told to proceed upstairs to the departures level. Security screening would come later upon entering the departure gate areas.

CGK as an airport is very charming in spite of it's age and need for updates. The design is of a tropical, traditional structure that you could picture in a jungle setting. 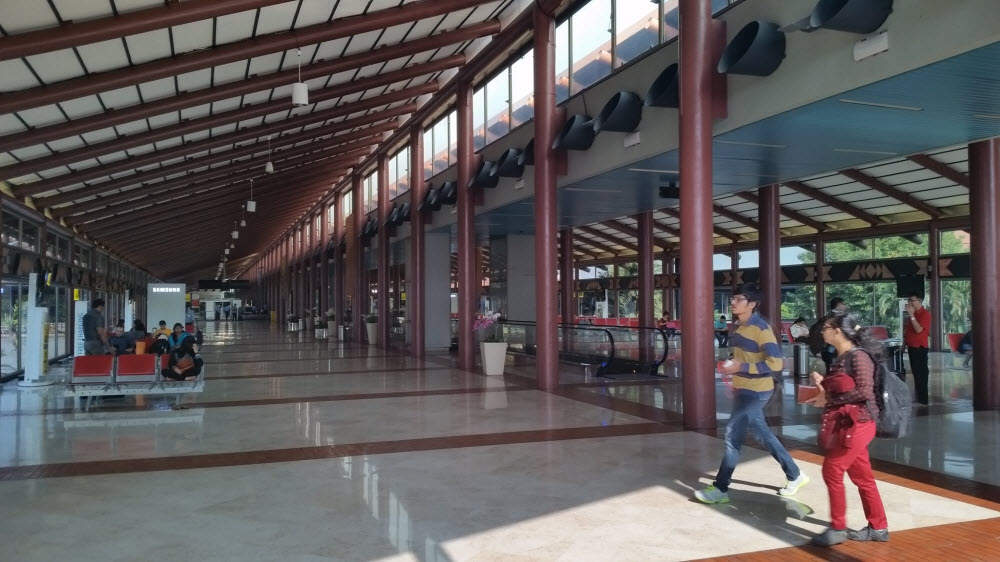 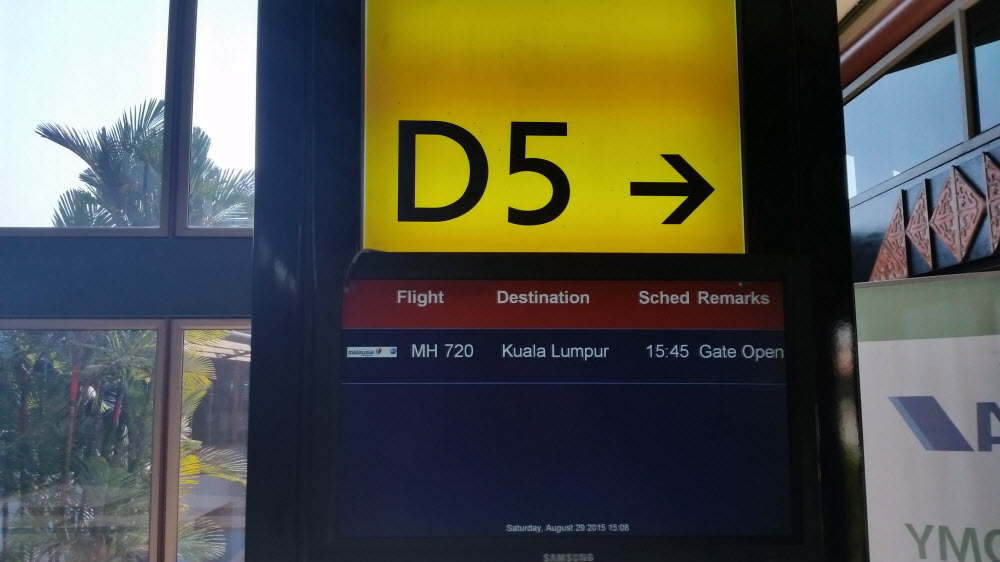 Entering the gate area is a separate house 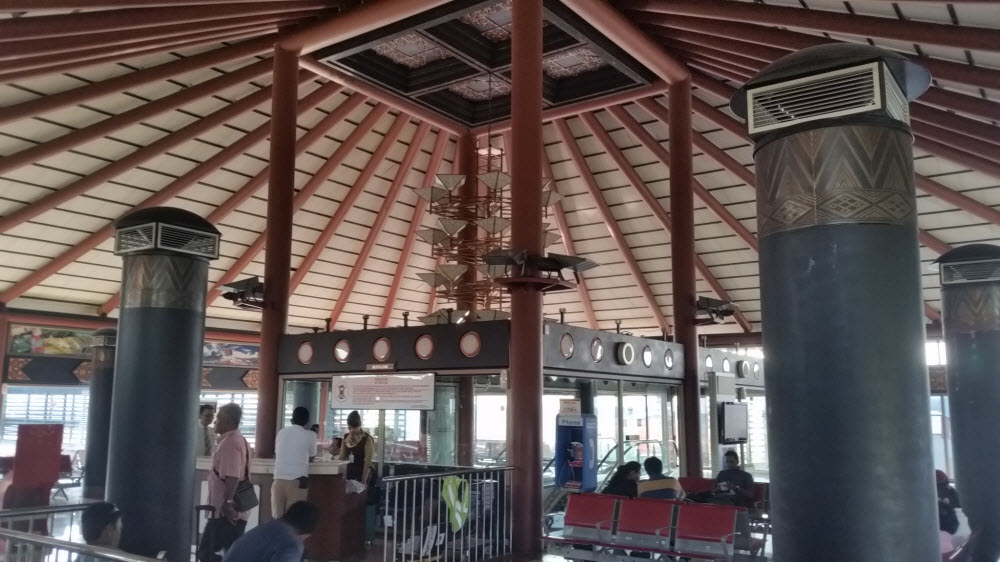 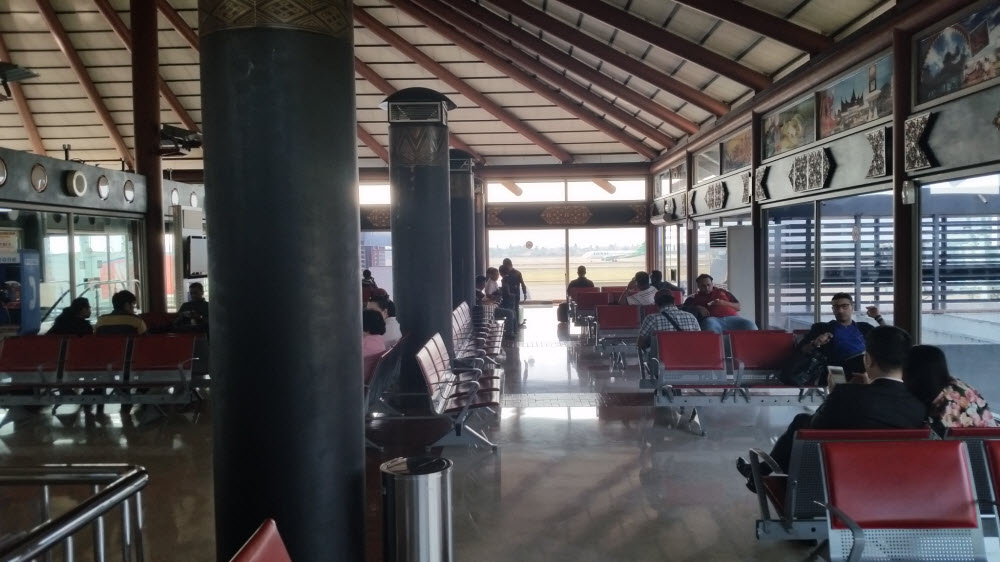 Looking across the field to some Garuda aircraft. 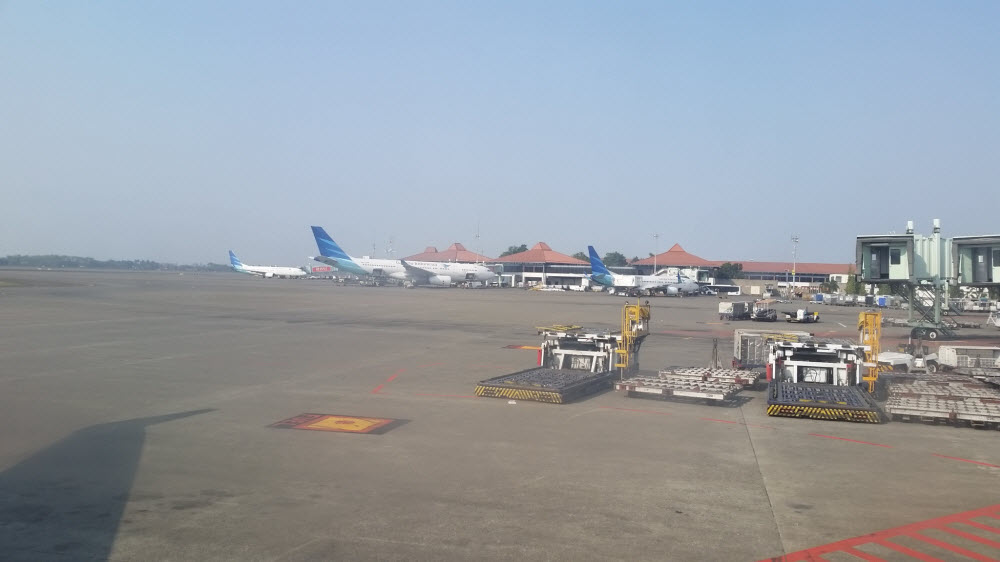 Boarding started timely and I took my seat. The view from 4A. 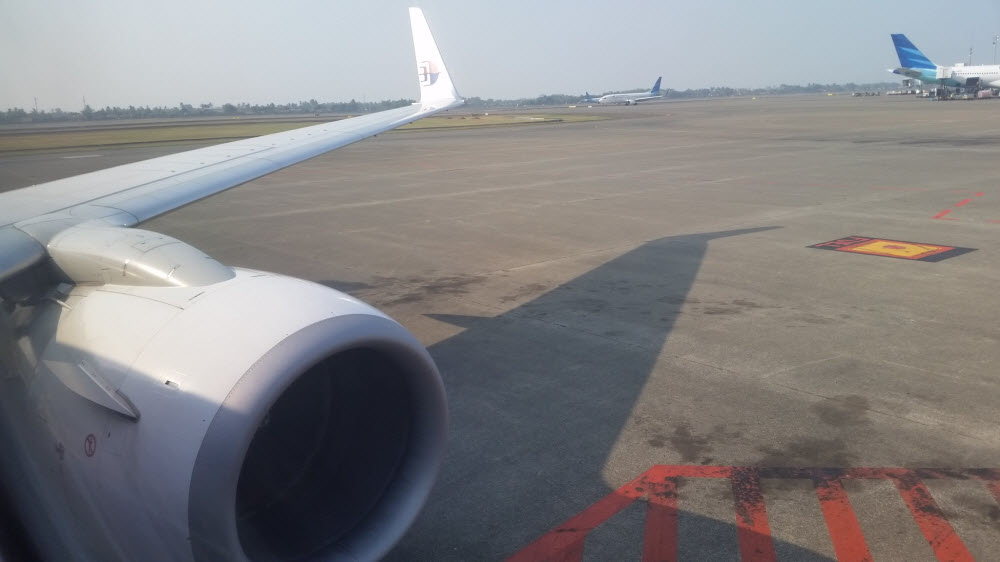 Menus were distributed on the ground. I only snapped a pic of the cover :( 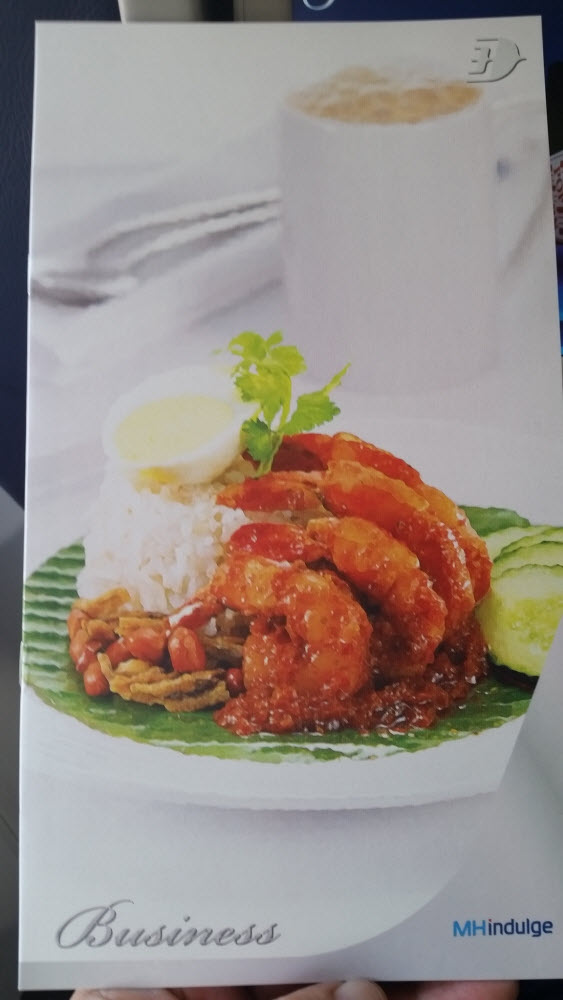 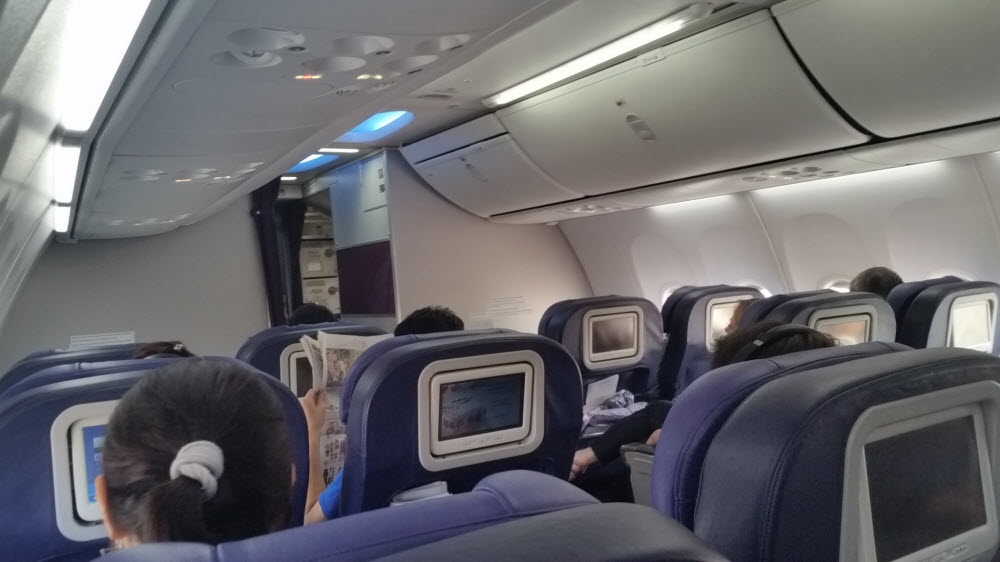 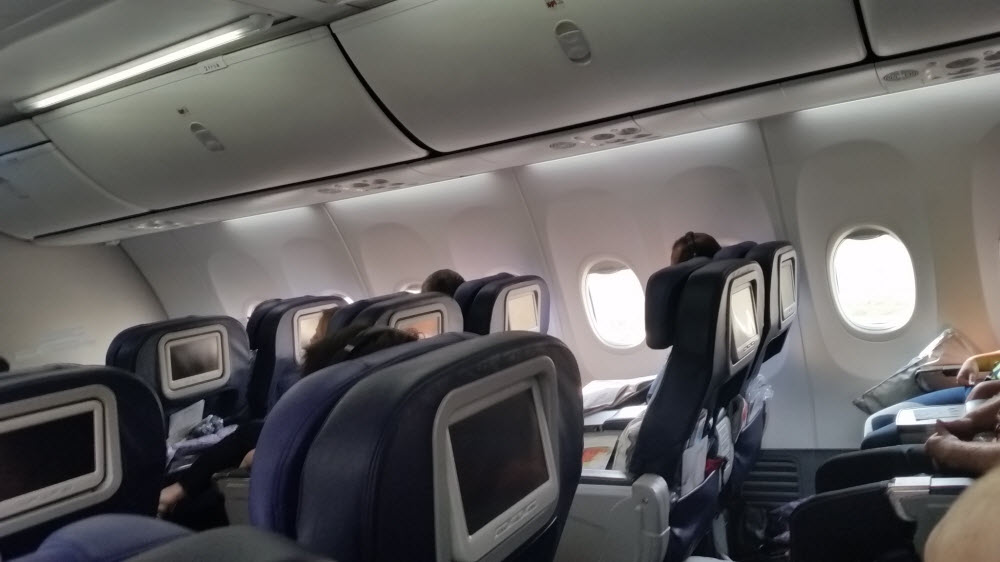 We pushed on time. Saw SV on the taxi. 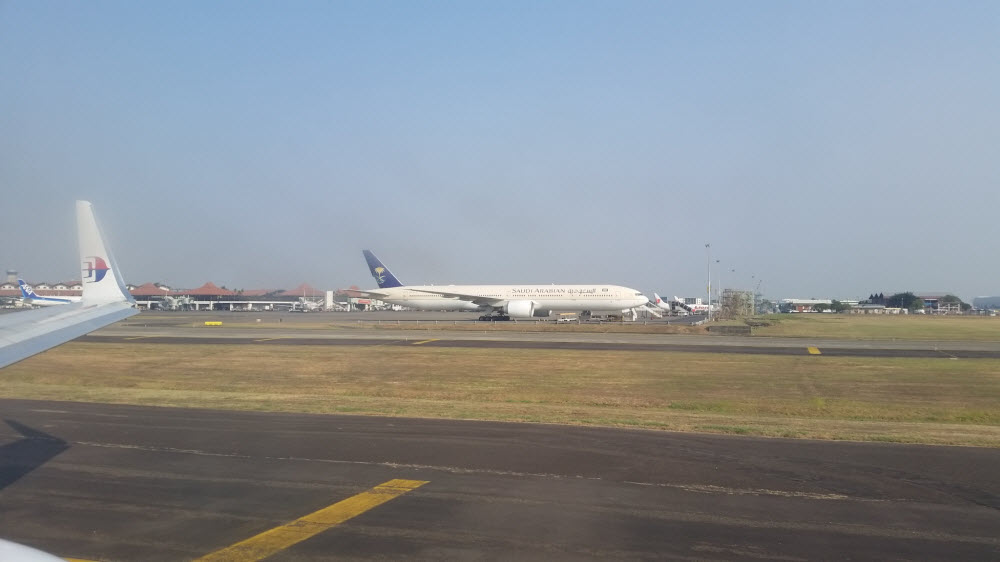 Off into the smokey Javanese air. 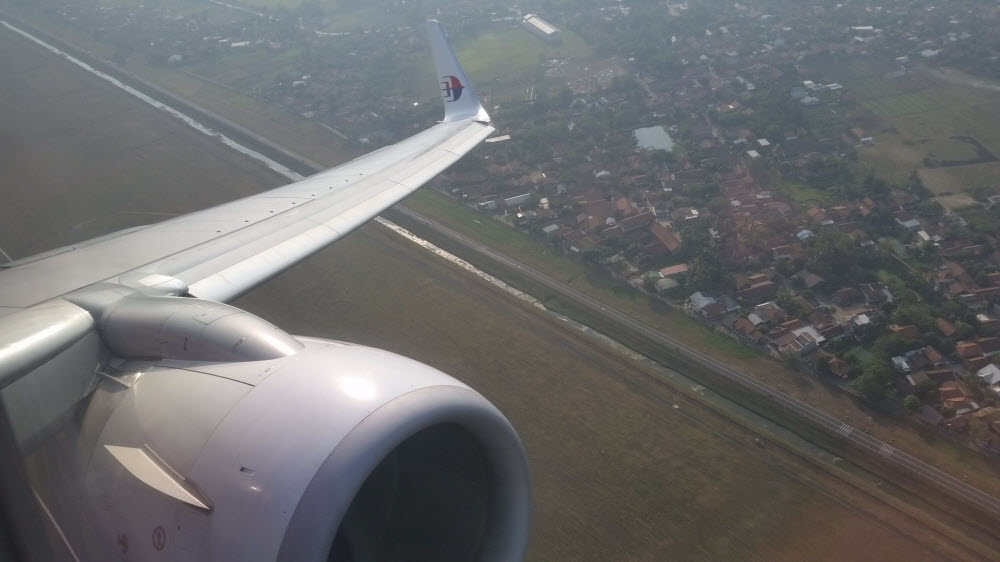 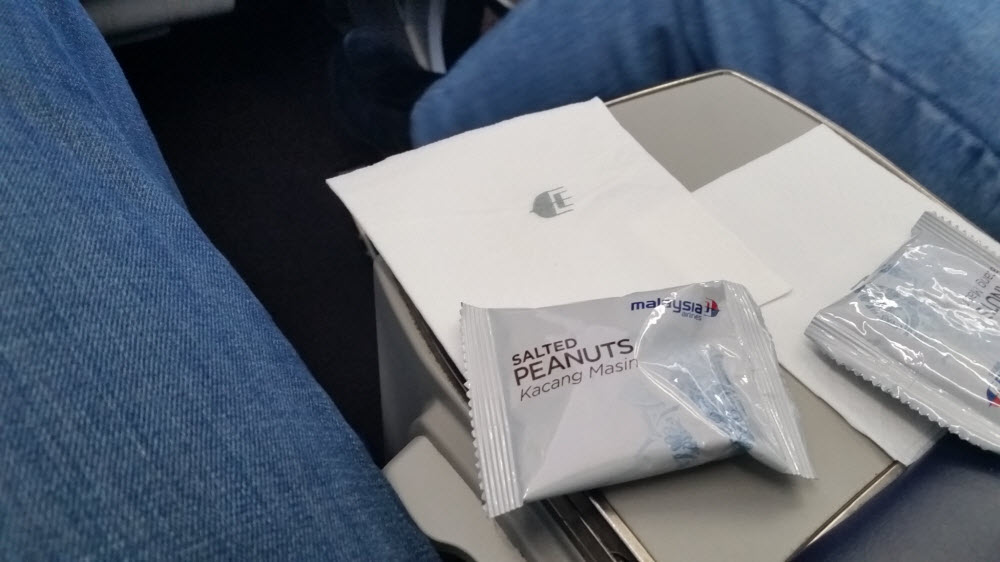 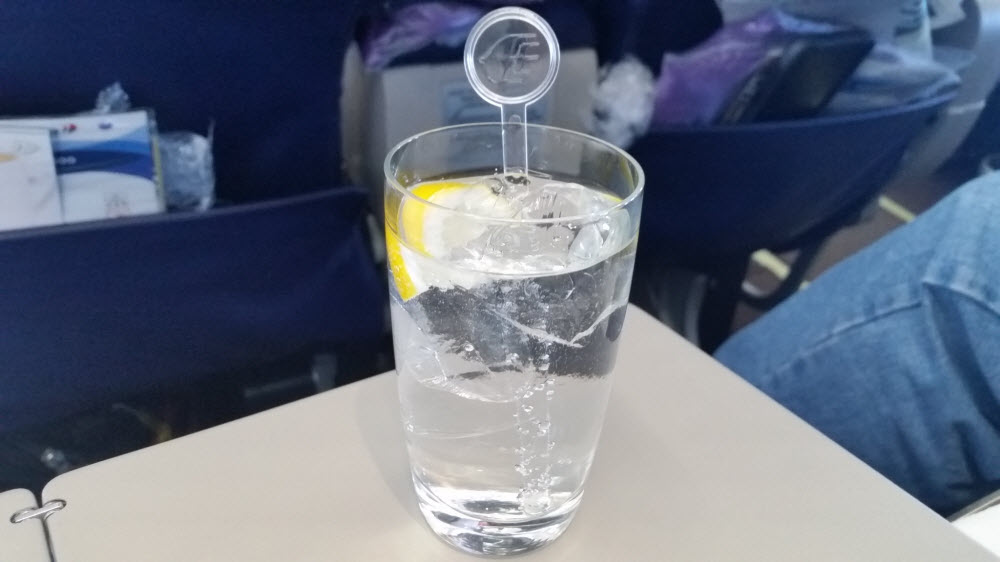 The seats were quite comfortable for this 2 hour flight. Similar to a US domestic first class seat, however there were foot rests. I'm not sure of the value of the foot rests as they could not be positioned comfortable given the tight pitch. THe PTV was ample with a good selection of current films. 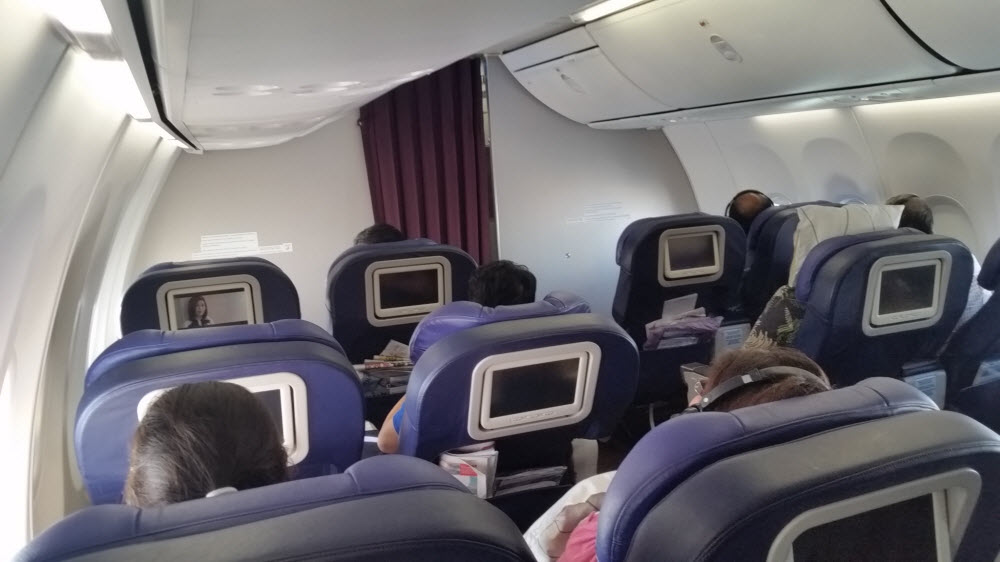 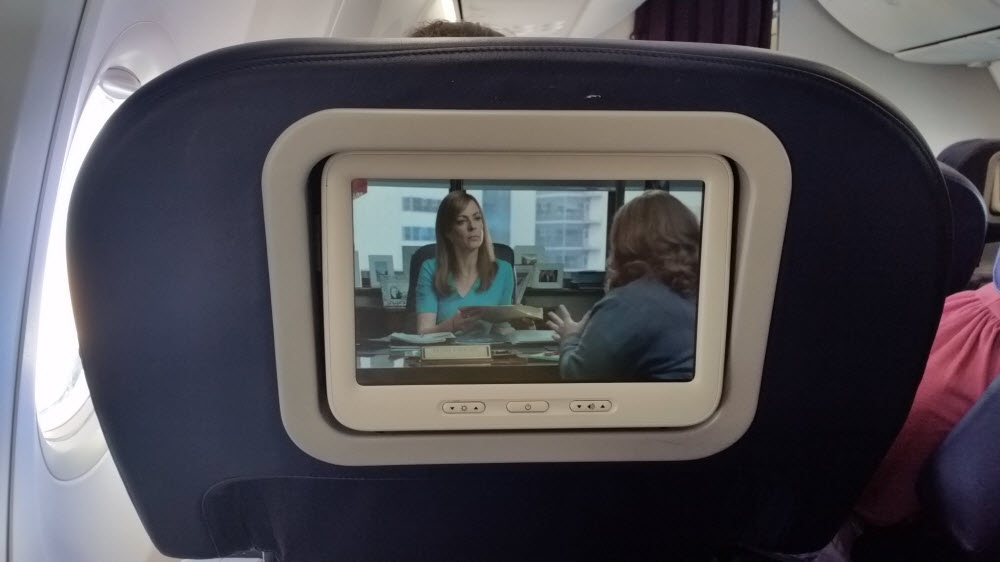 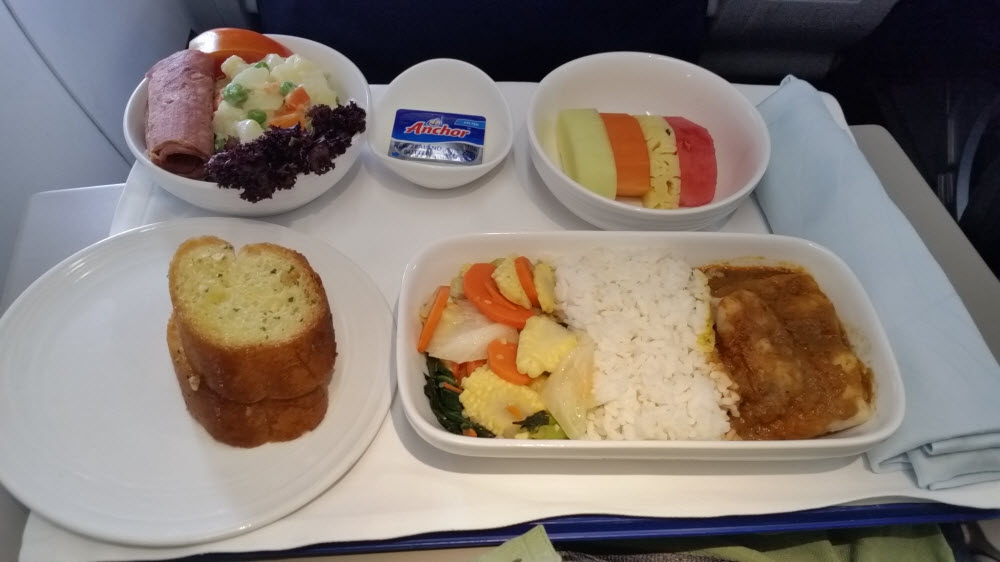 Strange appetizer that was no to my liking. 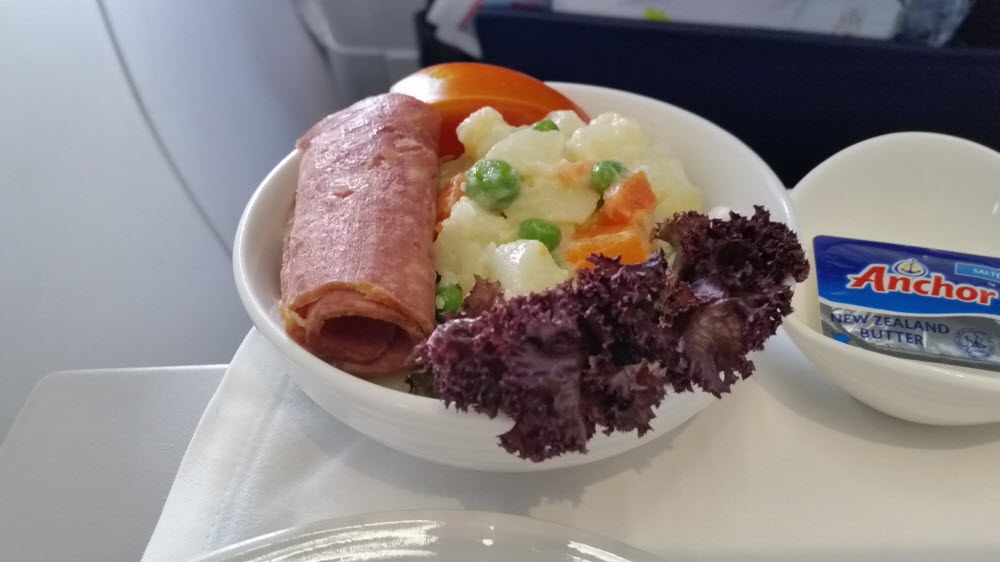 The fish curry was superb. Very very tasty, aromatic and perfectly spiced. The fish was soft and flaky. 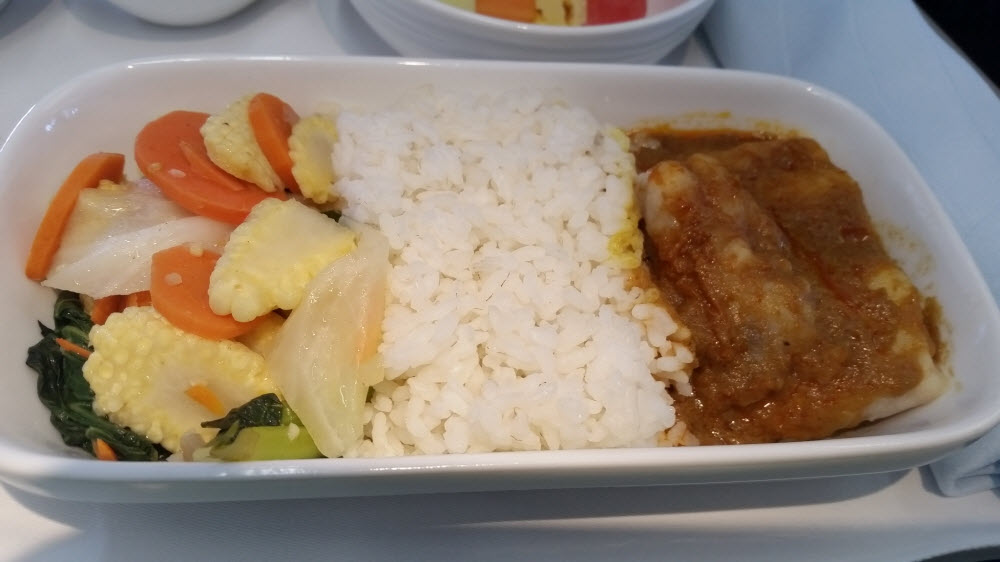 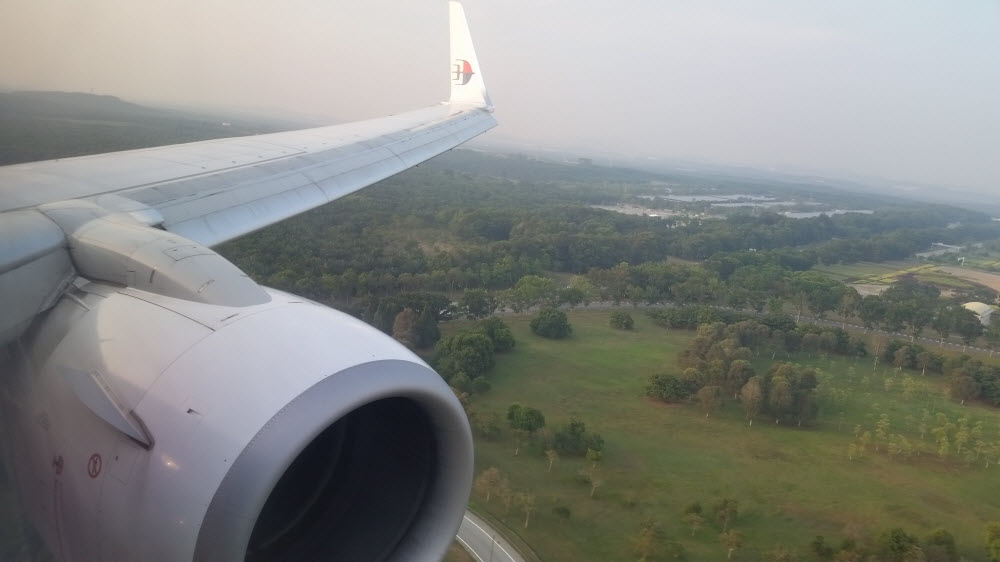 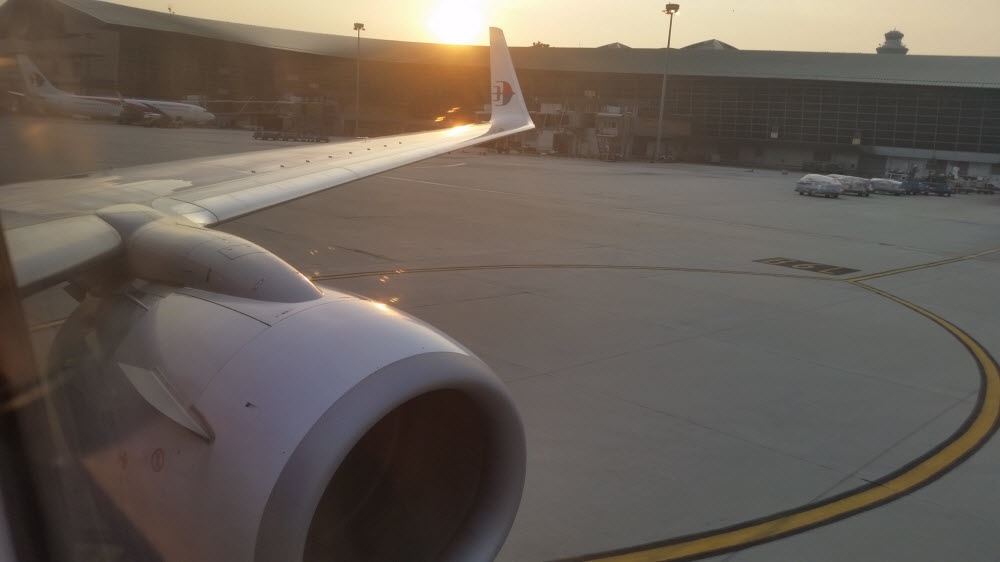 Immigration and customs were quick and painless and I was off on the KLIA Express to Sentral. 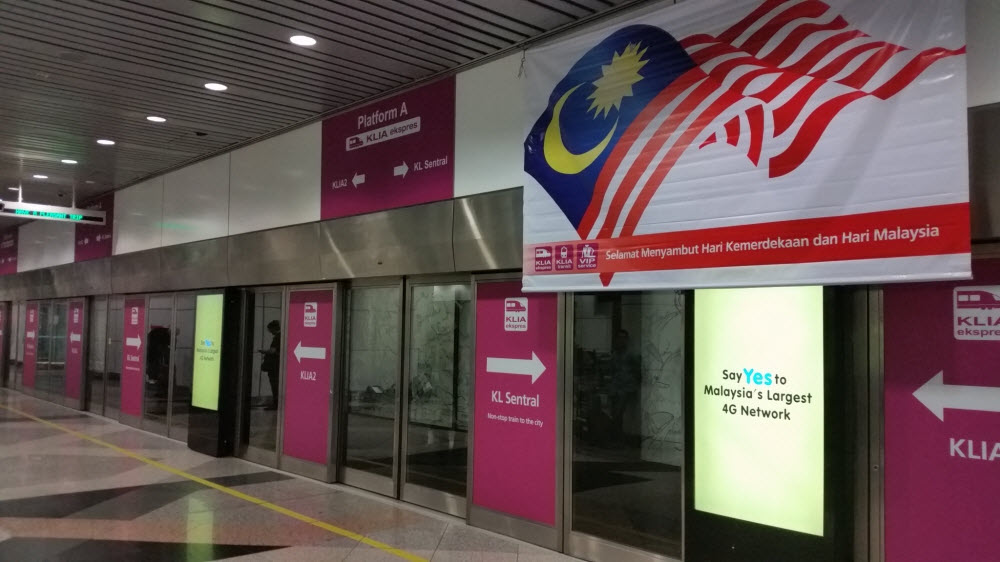 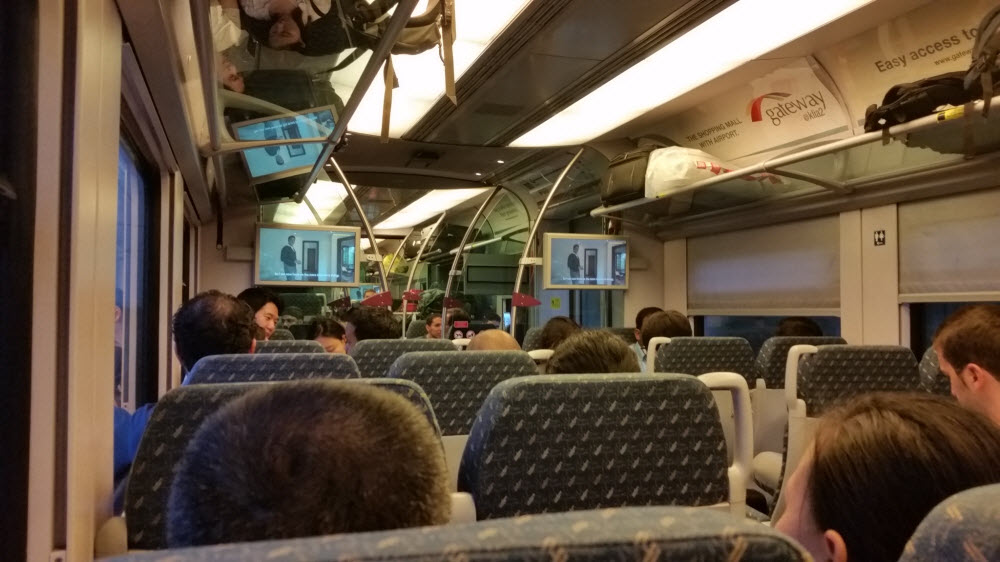 I stayed at a Westin that was in a good location for walking around in the evening. Although I was tired I wasn't going to visit KL and not enjoy some of the fantastic culinary offerings. I was a 10 minute walk from Jalan Alor, an albeit touristy, street of restaurants. 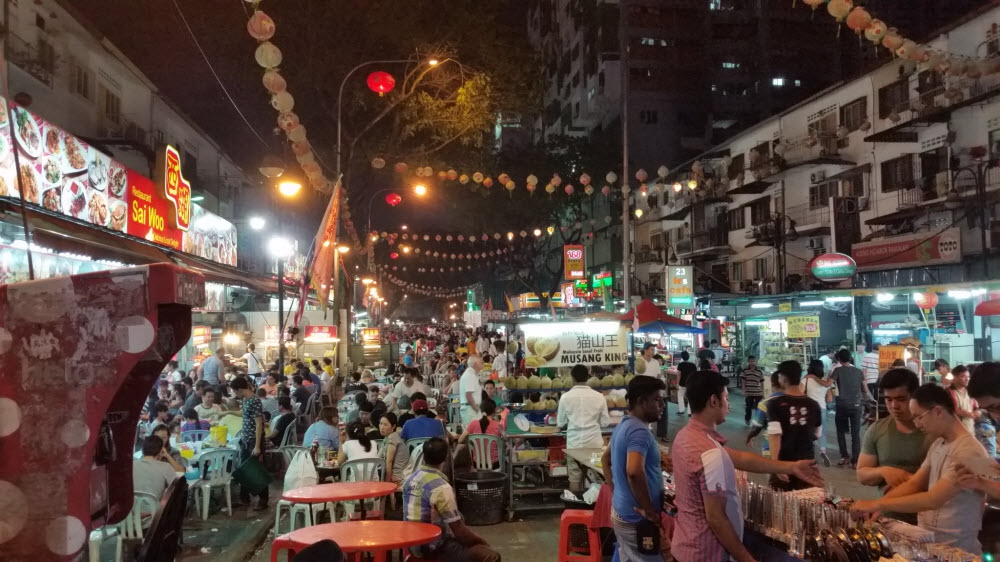 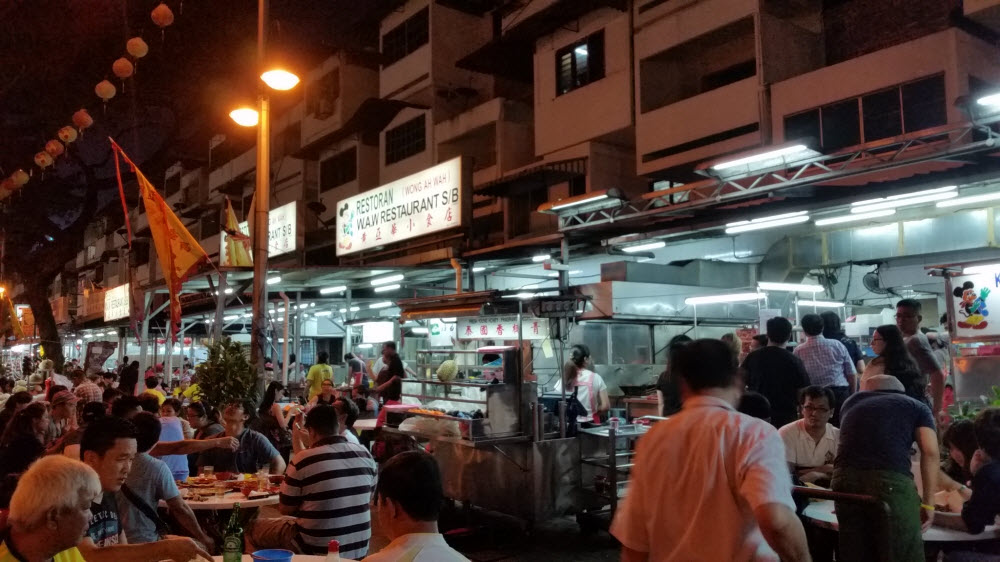 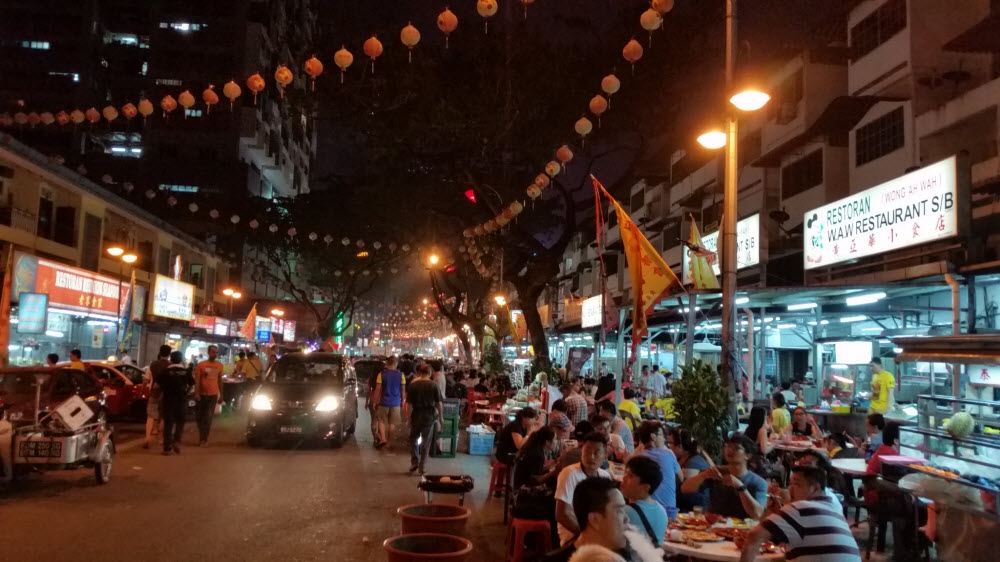 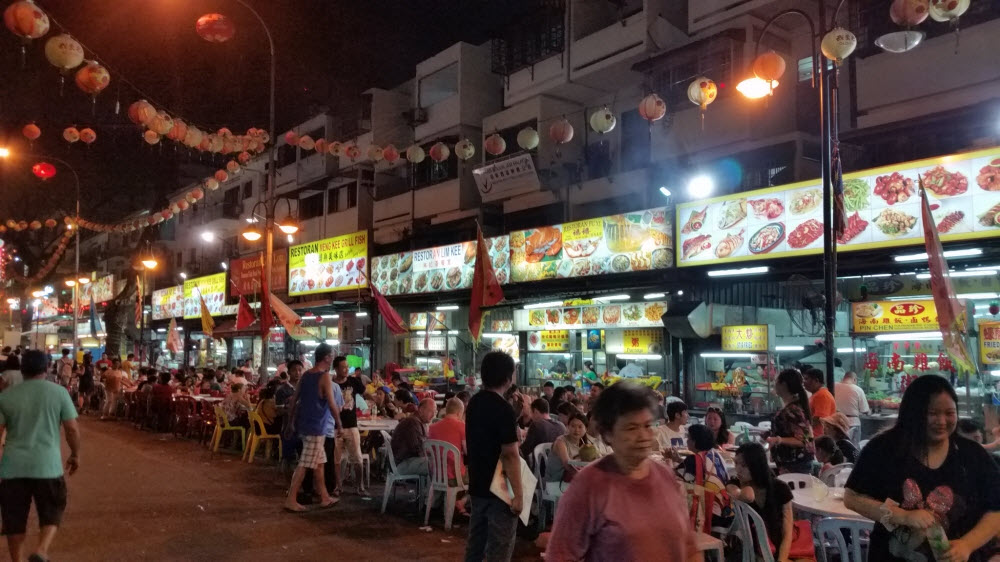 I procured a Tiger beer, some scrumptious chicken wings, and sambal prawns. 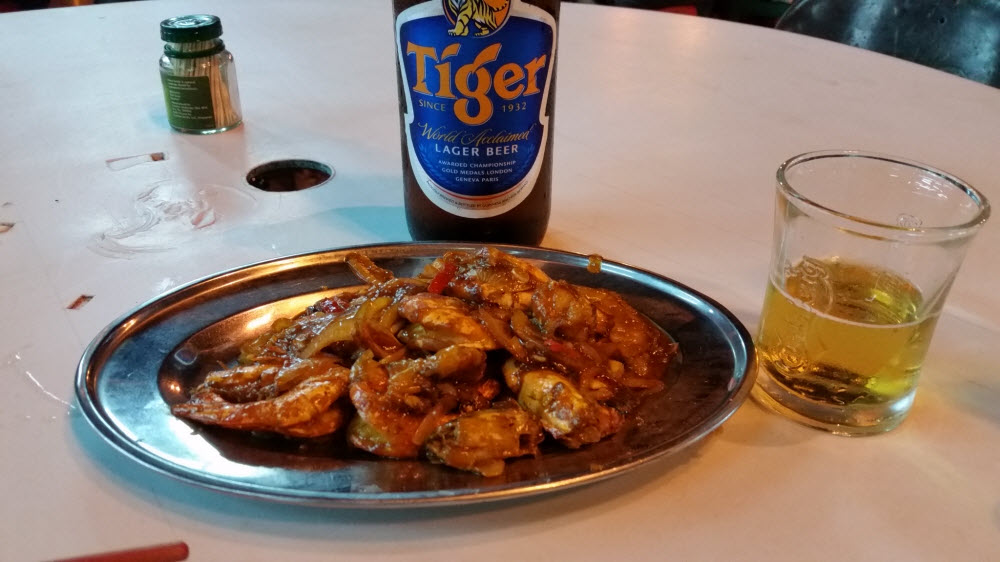 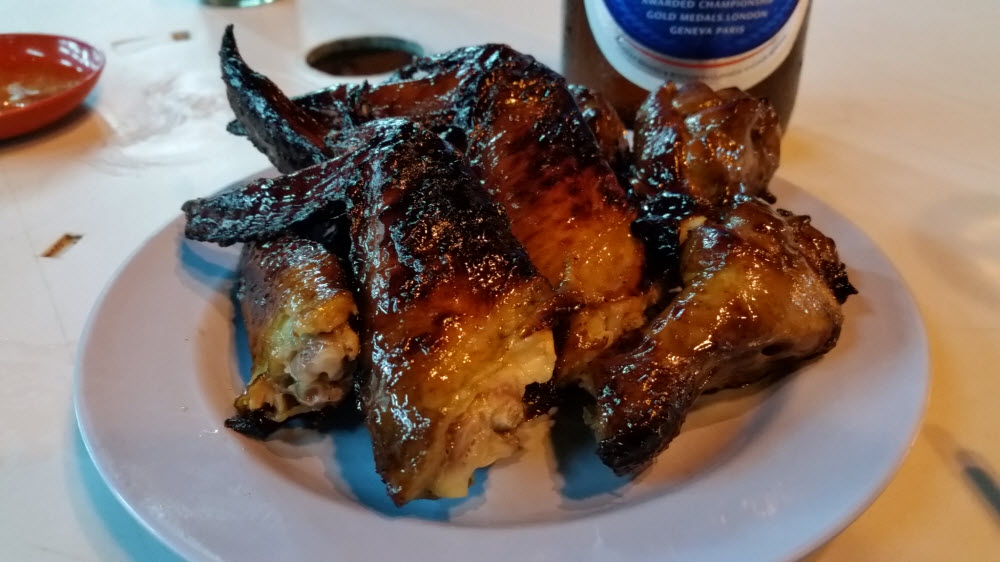 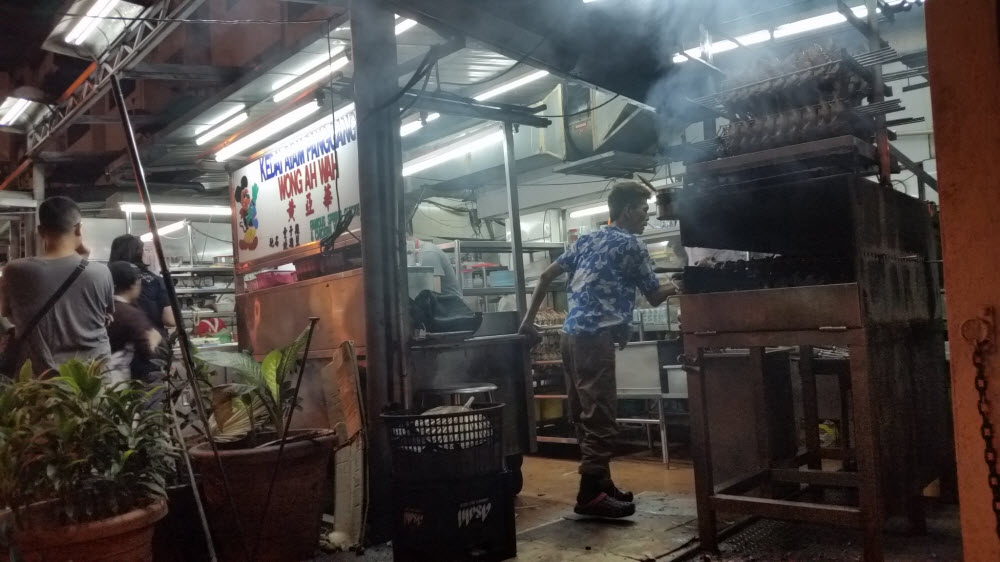 With that it was off to bed with dreams of tomorrows MH380 dancing in my head.

Thanks for checking out my short report on the regional Malaysia Airlines offering. Everything about this flight was in the fine to good range. The service was capably performed by a delightful young woman. The meal, except for the appetizer, was great. My gin and tonic had both gin and tonic ;) Reasonably comfortable seats, good IFE and an on time arrival.

Tomorrow will be my first and likely last chance to fly the MH 380 in First!

The contributors of Flight-Report published 20 reviews of 4 airlines on the route Jakarta (CGK) → Kuala Lumpur (KUL).

The airline with the best average rating is Garuda Indonesia with 8.0/10.

The average flight time is 1 hours and 52 minutes.