By Quirrow 2506
Published on 17th October 2015
For my return trip, I was actually nearly late as the Uber I had booked in China left me stranded, so that was some points off Uber. Instead I had to get a local taxi and just made it in time for the check-in. Fortunately for me the flight that I was supposed to board was also delayed anyway. 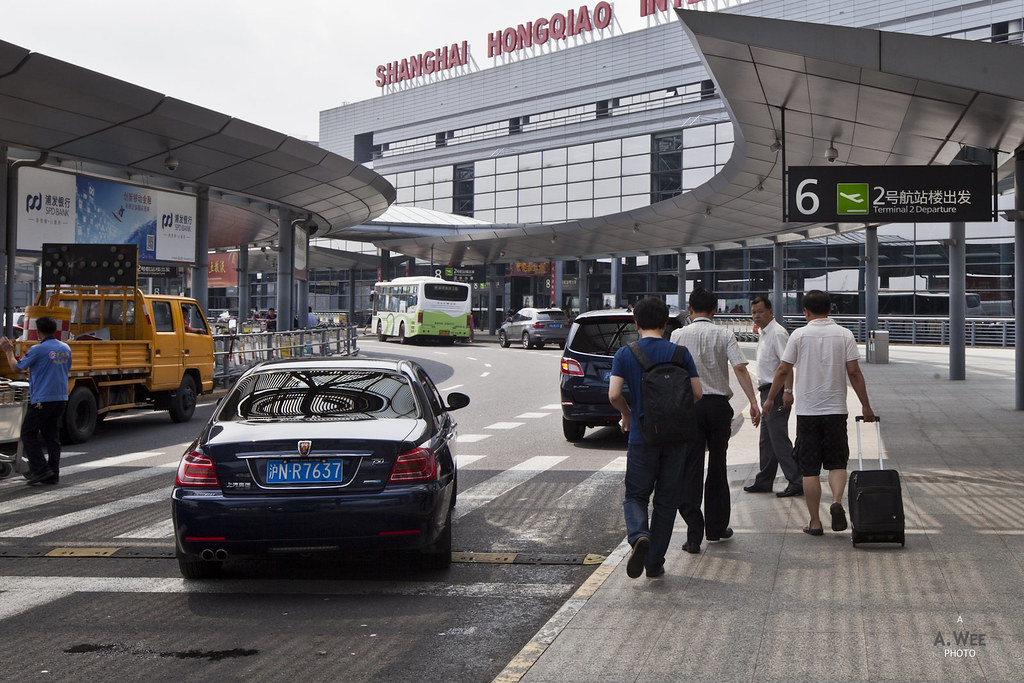 Check in was somewhat slow even though I was on the VIP counter though there was no queue or wait. There seems to be a problem with my connecting ticket as the first flight to Guangzhou was delayed, but I had scheduled a longer layover in Guangzhou so I was kind of sure there should be no problem. 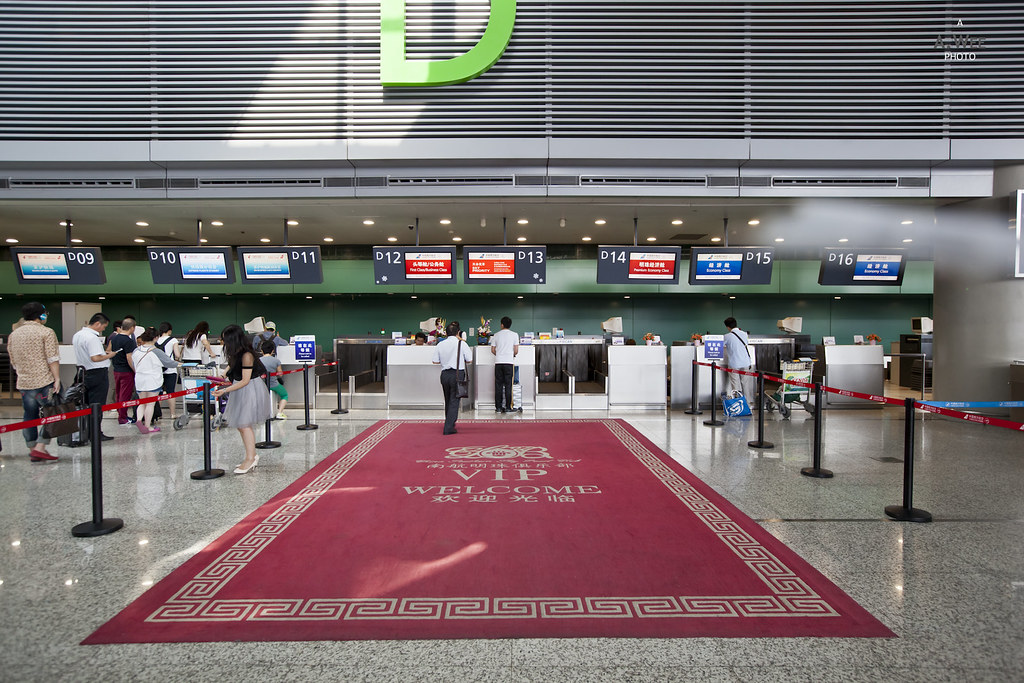 Eventually I had to be transferred to another counter and the lady was nice enough to actually move the luggage which I had placed on her counter to her colleagues' side. The interaction between me and the agent was a quiet one as she furiously typed on the computer. So it is not the most friendly and eventually when I receive my boarding pass, I noticed a change in seat assignment as I got 11C which was not the window seat of 3A that I had selected previously. Apparently there has been a change in the airplane again since I was scheduled to fly on the Airbus A330. 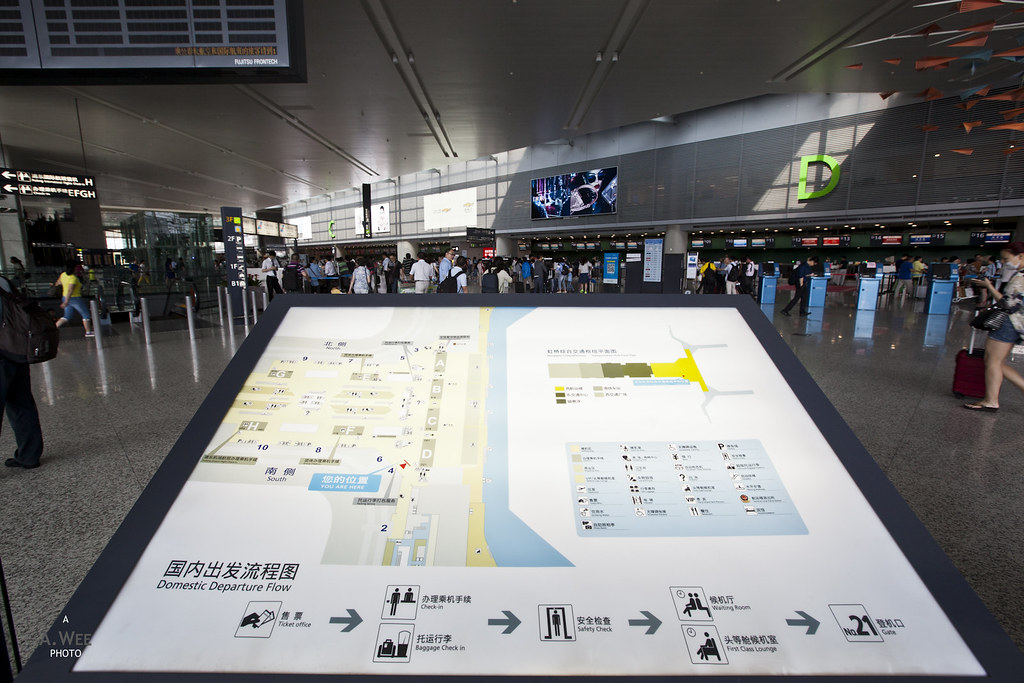 Floor plan of the airport

After getting my boarding pass, I head to the centre of the check-in concourse and noticed a VIP Club Lounge but I was not able to access it as it seems to be catering to bank card holders. 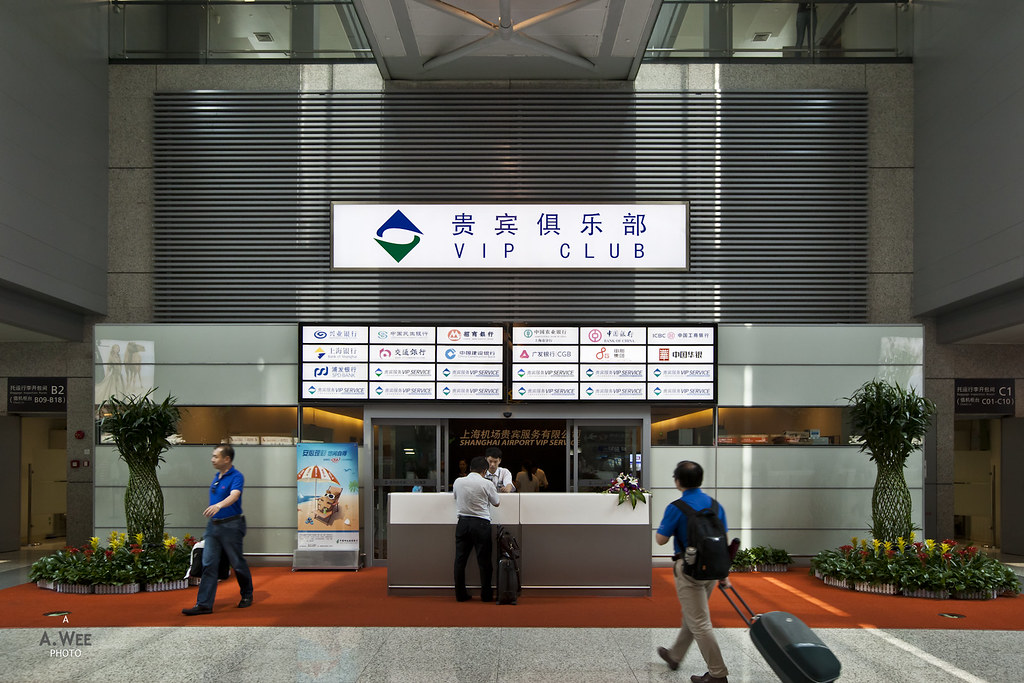 Thus I proceed to clear customs and immigration as travellers are checked for their identification for air travel within China. There was a moderate queue and while they do have a lane dedicated for premium passengers, it was equally long to the various queues for all passengers. 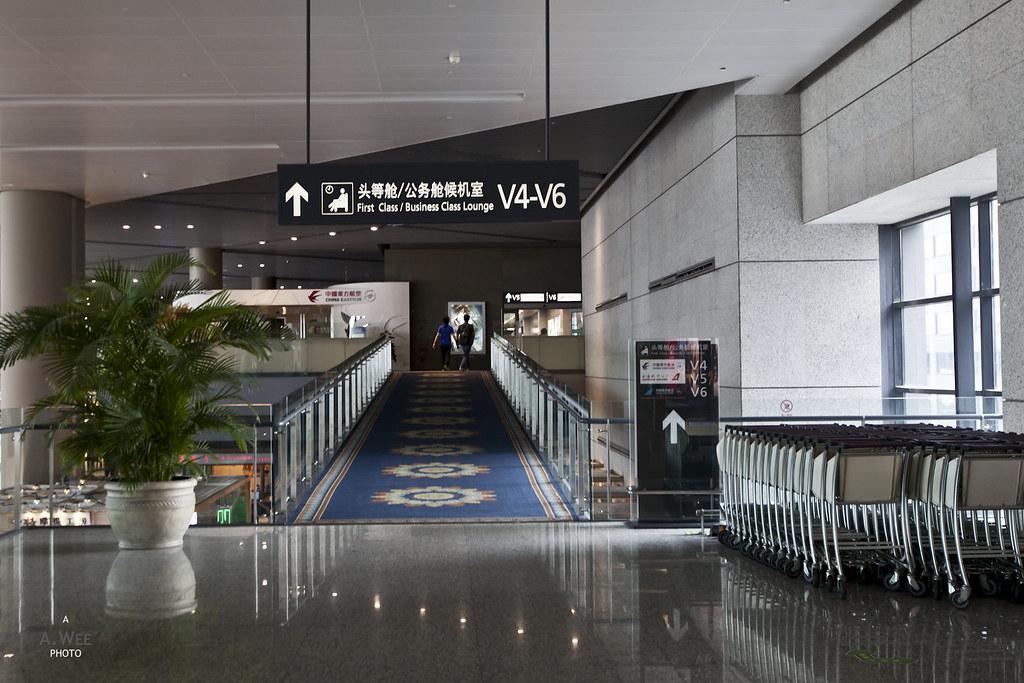 Directions to the lounge past security check

Past security, China Southern's lounge was located a short walk away. The same red carpet on the check-in counter greeted guests as it brings a new meaning to the 'red carpet treatment'. As a note, the lounge uses the airport's free wifi and that means guests do need a Chinese mobile number to access the wifi as registration is required. This might make it inconvenient for infrequent travellers to China. 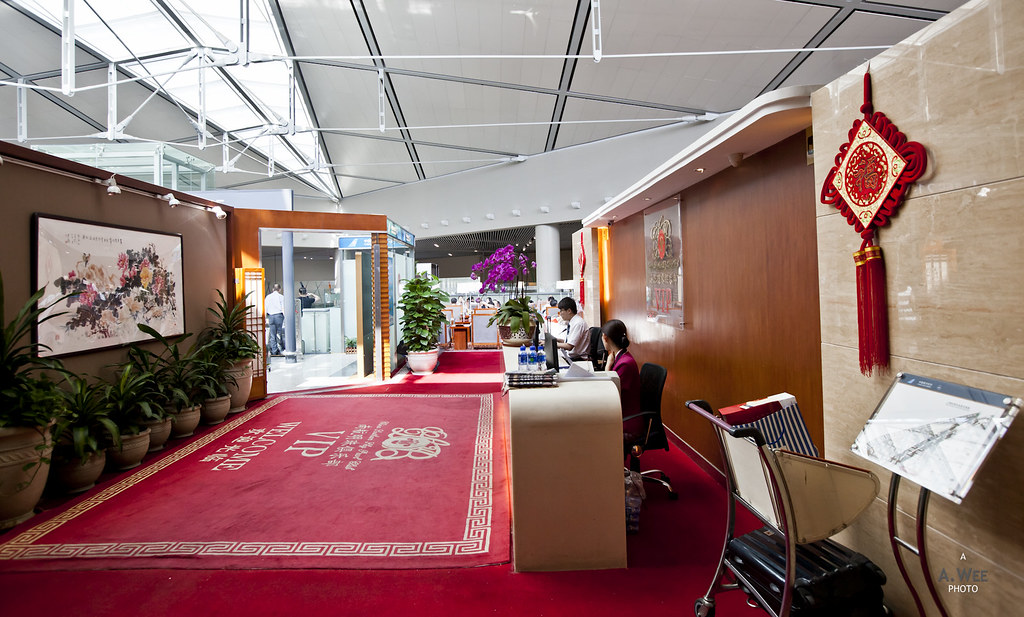 Entrance reception to the lounge

As it was past lunch time when I visited the lounge, there was no hot food served during the afternoon. The lounge did have some sandwiches and a large variety of snacks like crackers, candies and biscuits. Again as usual, airport lounges in China does not keep their drinks aren't cold enough as it seems to be like in room temperature even when they placed it in a small fridge. 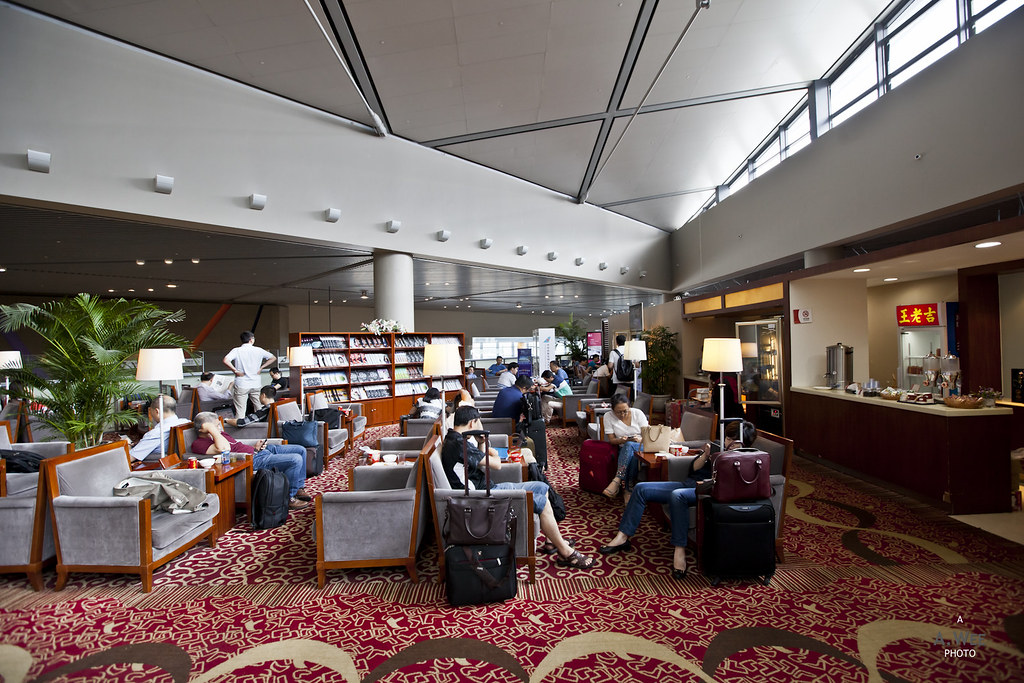 Inside the China Southern lounge 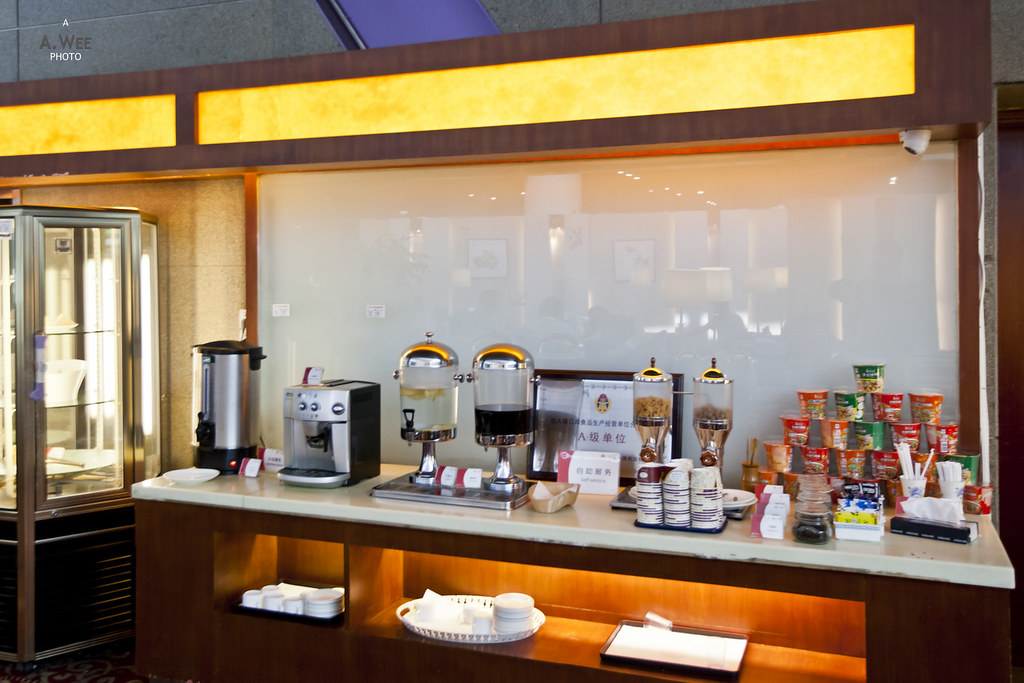 The lounge actually does have a lot of seating spaces and a small dining area. But otherwise there was nothing else to note here. I also did not check out any other amenities, though the staff in the lounge prohibited me from taking photos so there was not much to cover this lounge in a separate review. 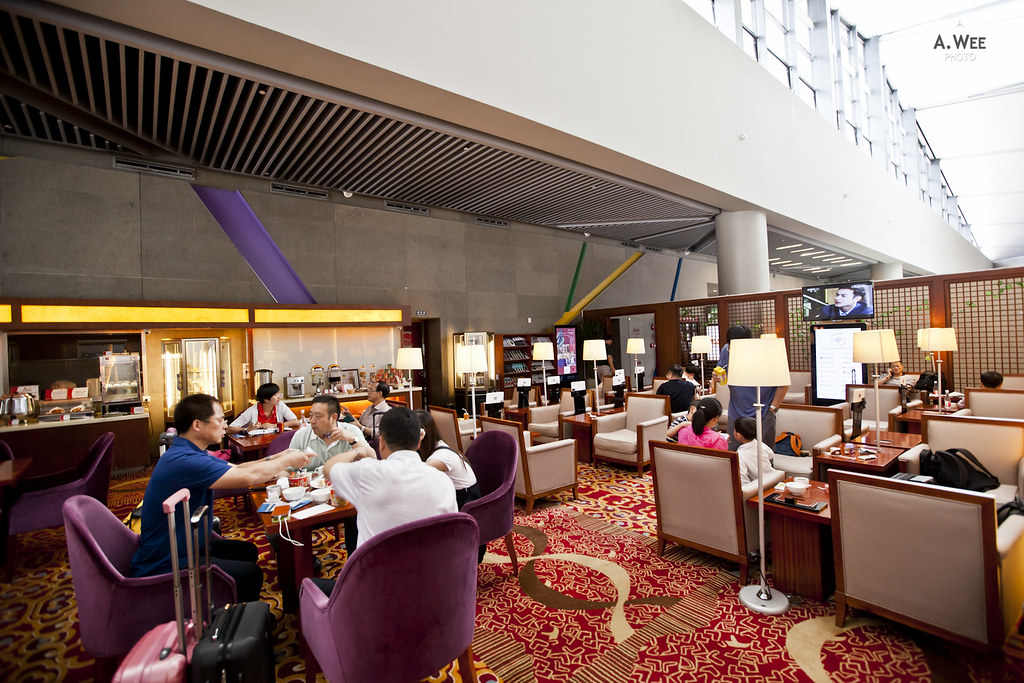 Furthermore I did not spend too much time in the lounge as I proceed to the gate shortly after the boarding announcement was made. As I made my way to the gate, I passed by yet another car advertisement though this time it is a whole car on display in the terminal floor. Basically I have been bombarded with car advertisements in China's airports, indicating the competitiveness of the automobile market in this nation. 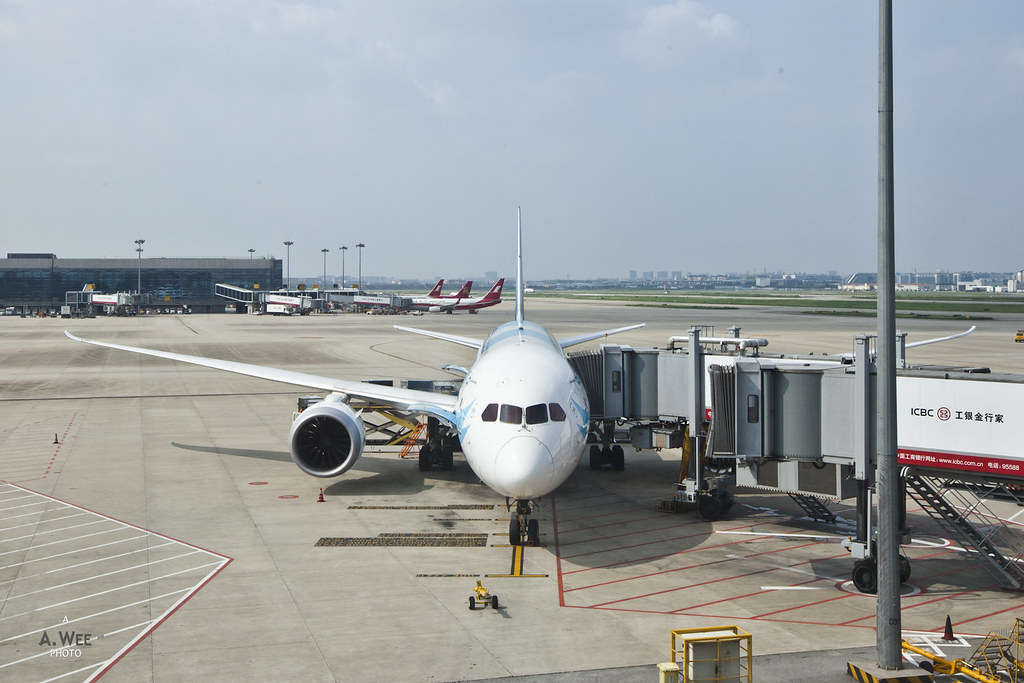 When I arrived at the gate, I was somewhat disappointed to see yet another 787, since I was really hoping the aircraft change would at least allow me to try out the other planes in China Southern's fleet.

As I boarded the flight, the Business class cabin was already half occupied, and my seat mate who is a Chinese gentleman in his 50s was already seated. He was a very good seat mate to have since he declined all meal orders, reads newspapers and magazines for most of the flight and does not generally bother you. 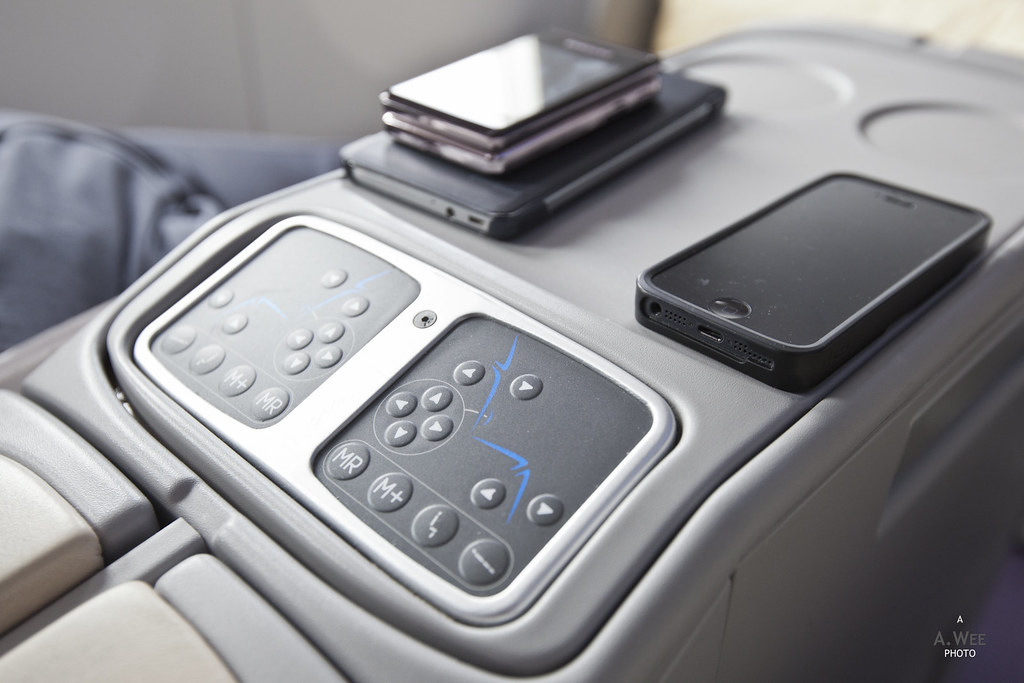 Seat controls on the 787

Hot towels were offered once passengers were seated and the crew came around with a tray of beverages. I got a cup of orange juice once again, while my seat mate got a cup of warm water which is the default choice for many Chinese passengers. 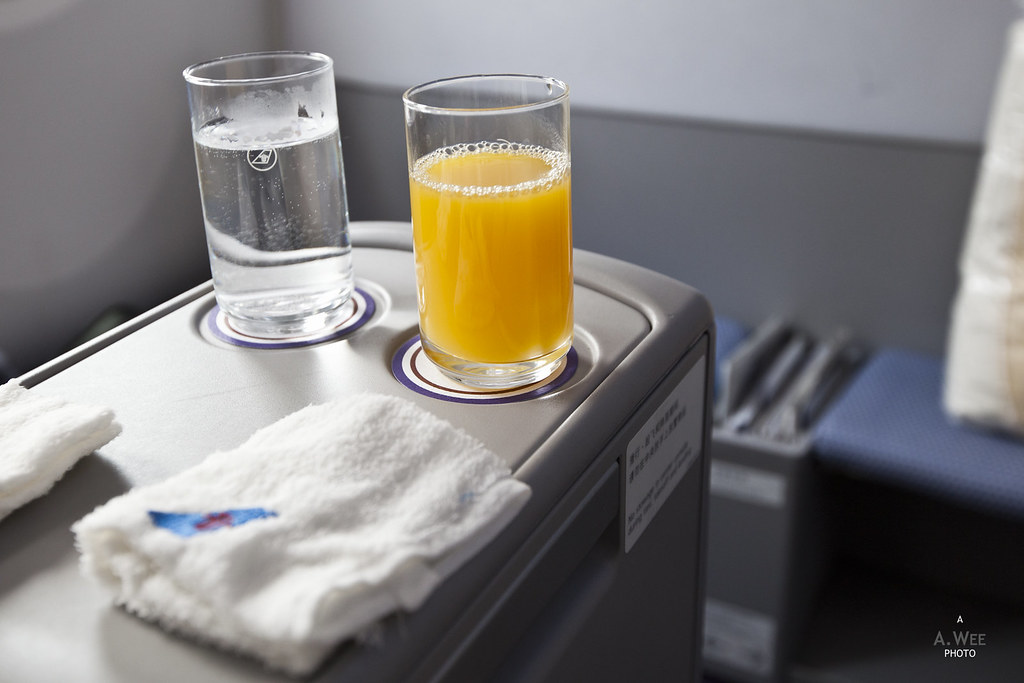 During the boarding phase, there was apparently a couple that was complaining for the changes in their seat assignments that seats them at different seats. Either way, the crew arranged for them to be seated at 11 D and G, and a lady occupying 11G was upgraded to the First Class seat. I wished it was me instead but I had a 50 year old businessman as a seat mate and the cabin crew was especially courteous to him. It seems that upgrades in China Southern does not depend on the status of the passenger but rather by luck and coincidence, as my previous experience says. 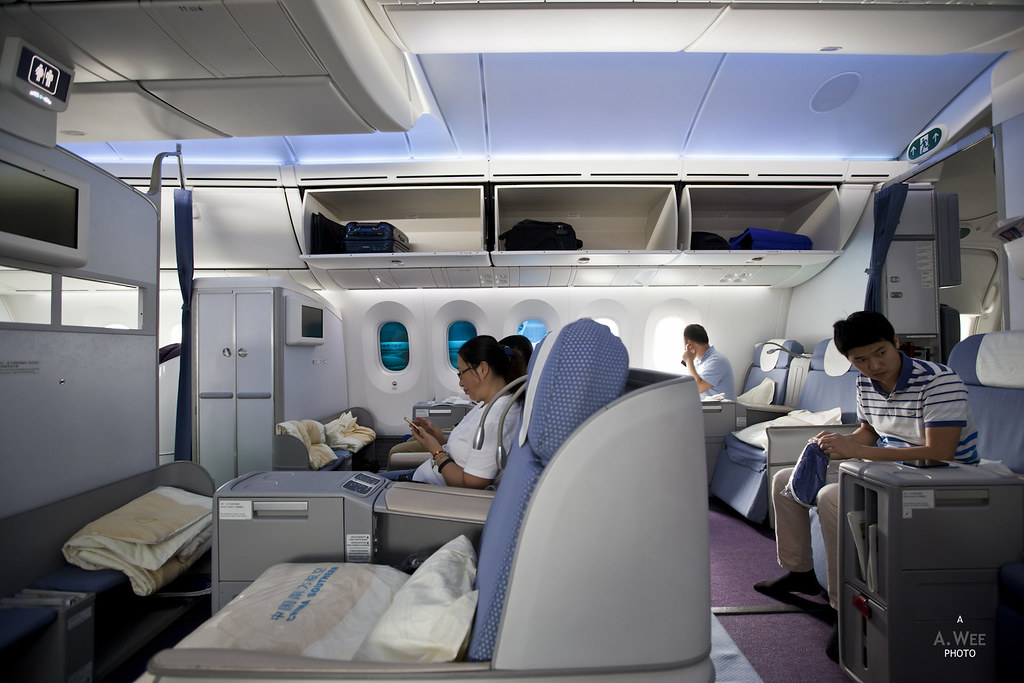 Due to the delayed boarding, pushback took place around 3:30pm and it was not until 4pm when we took off. Once again, China's main airports are really prone to delays and I figure it will really hurt the bottom line of the major Chinese carriers in the long run. Once we reached cruising altitude, the crew came around with drink orders and I had a cup of Chinese tea with the small plate of nuts while watching a documentary on the inflight entertainment. 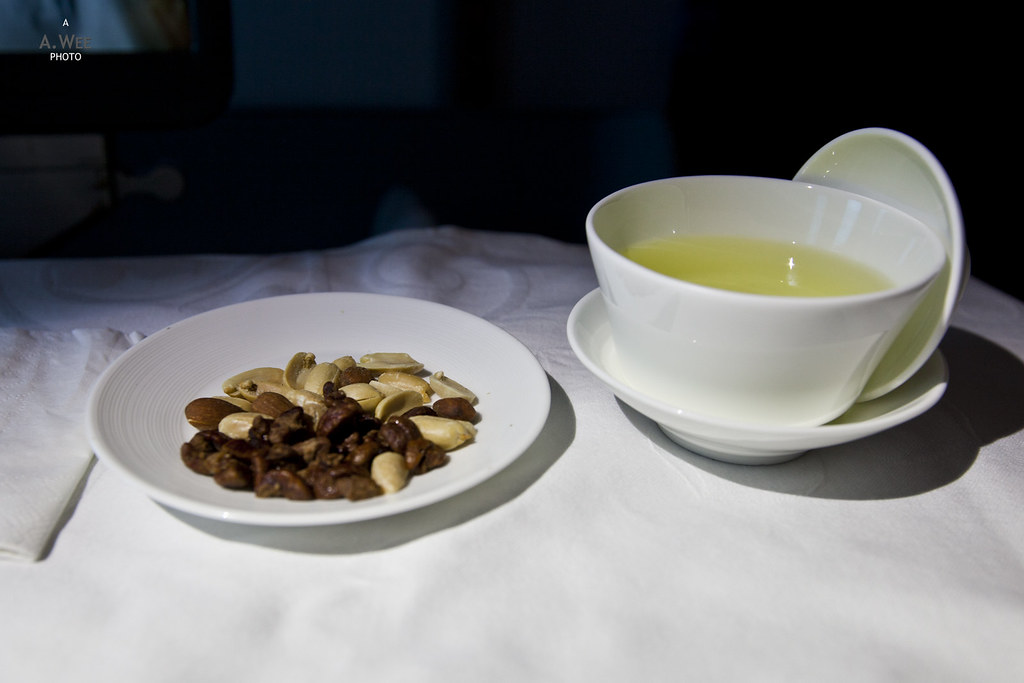 Tea and nuts right after take-off

Then the crew also came around with meal choices. The only choice for this afternoon flight was between the signature big beef bowl noodle or a dim sum platter. I went with the former and while it was edible, the noodles were a bit too thick for my liking. The beef and the broth tasted really good though and it also came with a plate of condiments. On the meal tray, there was also a small fruit bowl. 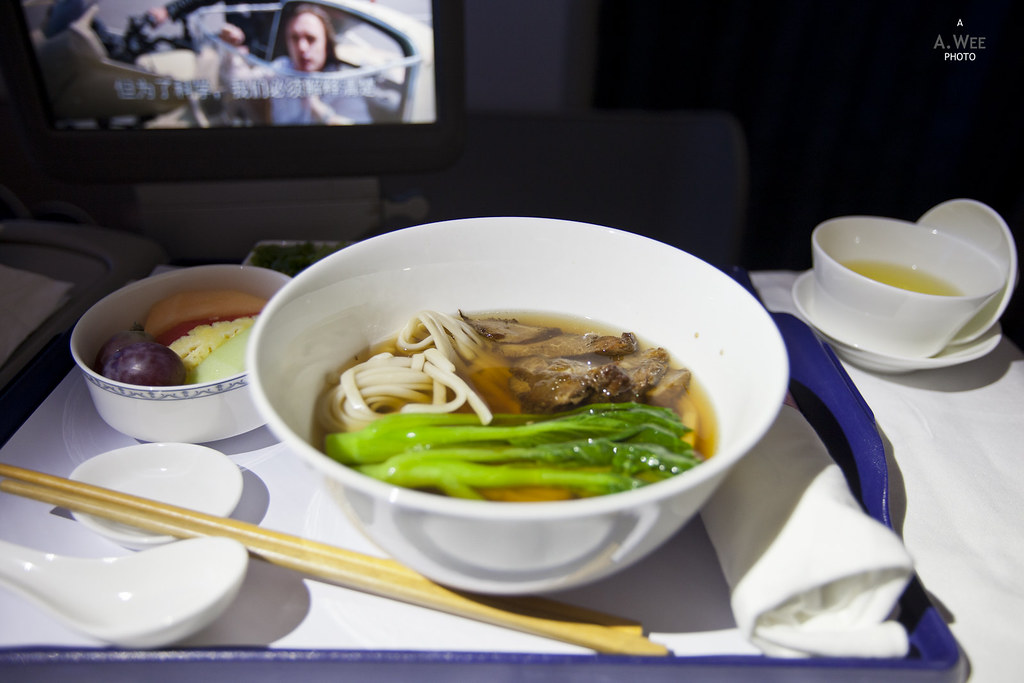 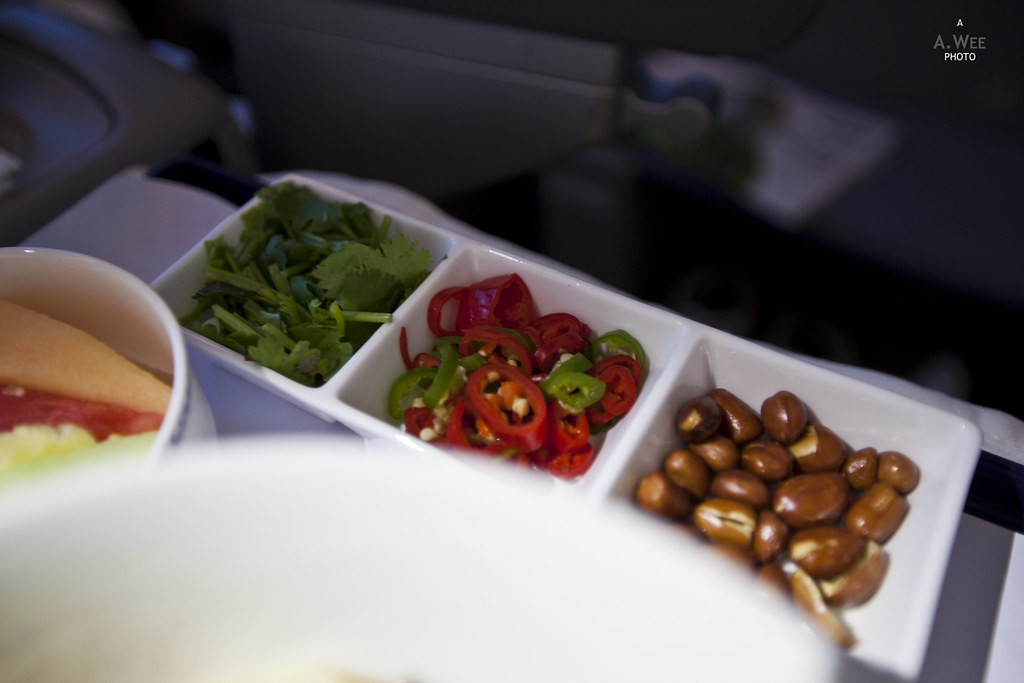 Condiments for the meal

With the meal and the inflight entertainment, it was time to land and this journey seems shorter than the trip from Guangzhou to Shanghai. Though it was actually around the same time, I did spend much more time inside the plane due to the tarmac delay on the other flight. So in reality this short domestic flight really does not need a lie-flat bed since I did not even utilize it before we have to start placing our seat back upright for the descent. 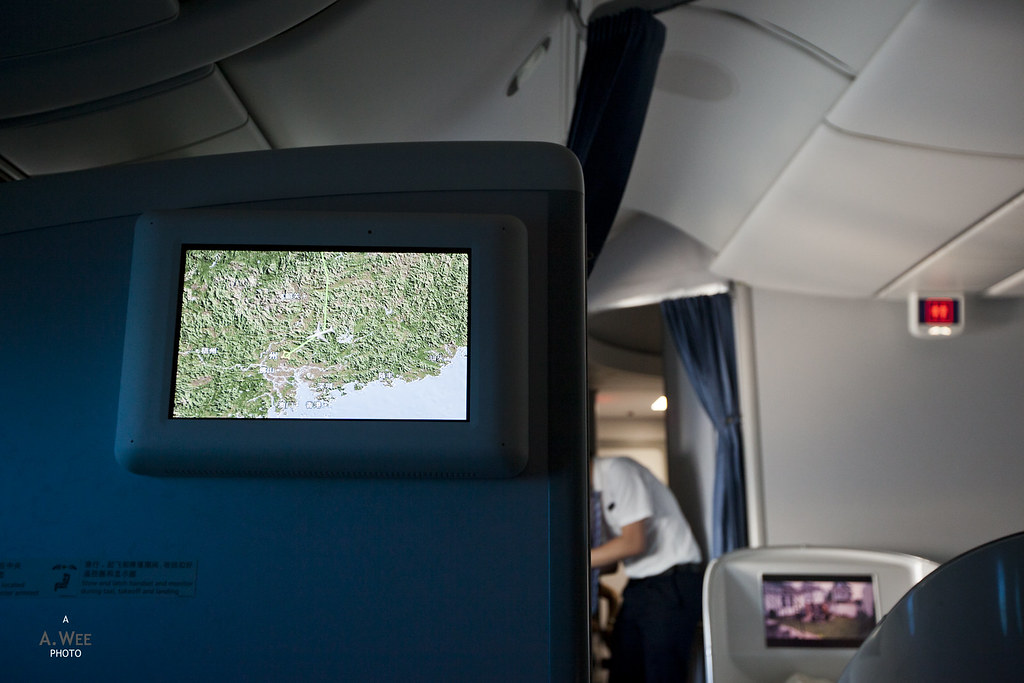 Landing into Guangzhou, it was once again a remote parking bay for our flight and all of us had to take the bus. I was able to board the premium bus which has only seating space. 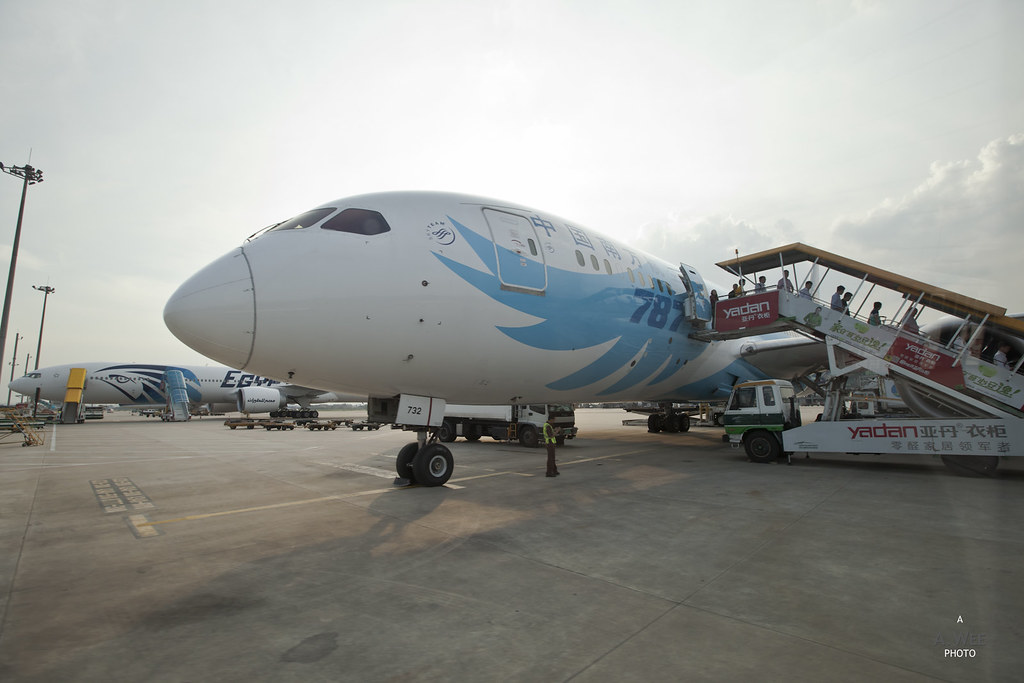 When we reached the terminal, there was handler who had my name and other passenger's names on a board. Apparently there was to be a buggy which brought us across the large terminal via an overhead dark alleyway into the opposite end where we could transfer to the international departures area. 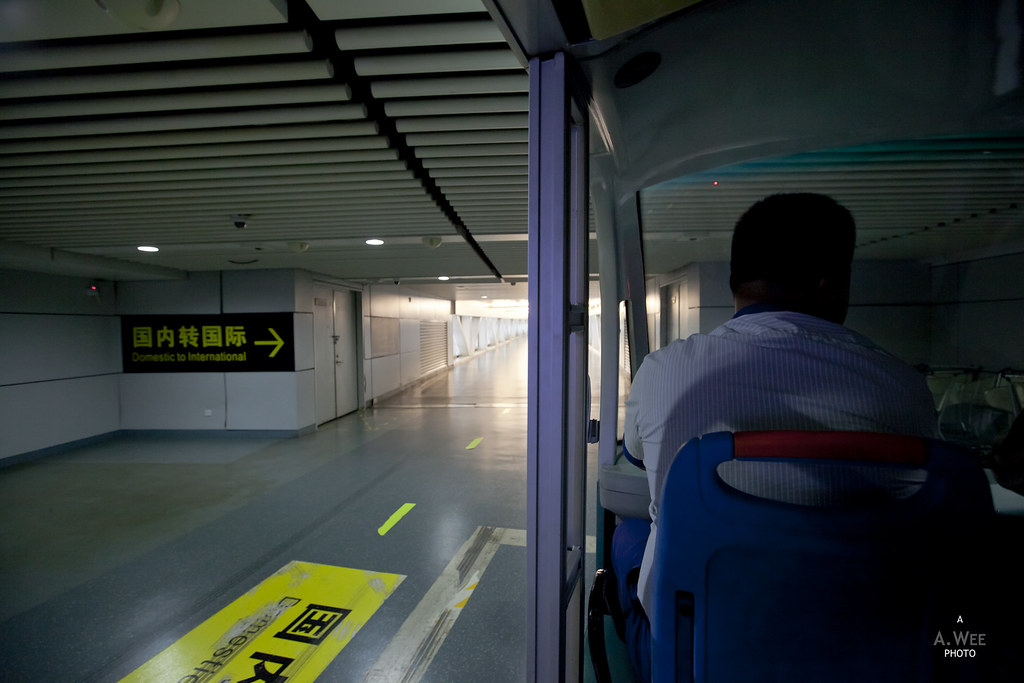 Is there anything wrong on this flight? A lie-flat bed for a sub 2 hour domestic flight with full meal service and inflight entertainment. There really should not be complaints, and I really think China Southern is doing a good job in trying to make it convenient for connecting passengers even if it means going on a longer route for most passengers since Trans-Pacific and flights to Europe are always faster and shorter via Northern China (Air China in Beijing and China Eastern in Shanghai). Only flights to Australia and South-East Asia makes sense for connecting via Guangzhou. However my upcoming flight review on the Airbus A380 service between Guangzhou and Los Angeles will probably explain why.
See more

Domestic flights within China are susceptible to delays and more so when there are tropical cyclones. The catering for such a short flight is not necessarily bad, but it is usually better when it is closer to lunch/dinner times. Overall, it is still a good flight, just marred somewhat by the lack of choices in catering and the slight delay.

Information on the route Shanghai (SHA) → Guangzhou (CAN)

The contributors of Flight-Report published 3 reviews of 1 airlines on the route Shanghai (SHA) → Guangzhou (CAN).

The airline with the best average rating is China Southern with 7.6/10.