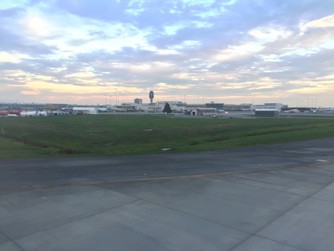 #19 out of 78 Airlines A minimum of 10 flight-reports within the past two years is required to appear in the rankings. 348 reviews

By hometoyyz BRONZE 2654
Published on 22nd October 2015
This flight report is the third in a four-part series chronicling a trip from Toronto to Hong Kong in Air Canada business class.

When last we saw each other, your humble flight-reporter had just arrived in the domestic terminal in Vancouver, having just completed customs formalities, transit security and the like after arriving from Hong Kong.

This one’s probably going to be pretty quick compared to the previous three, since it’s a late-day narrowbody flight. 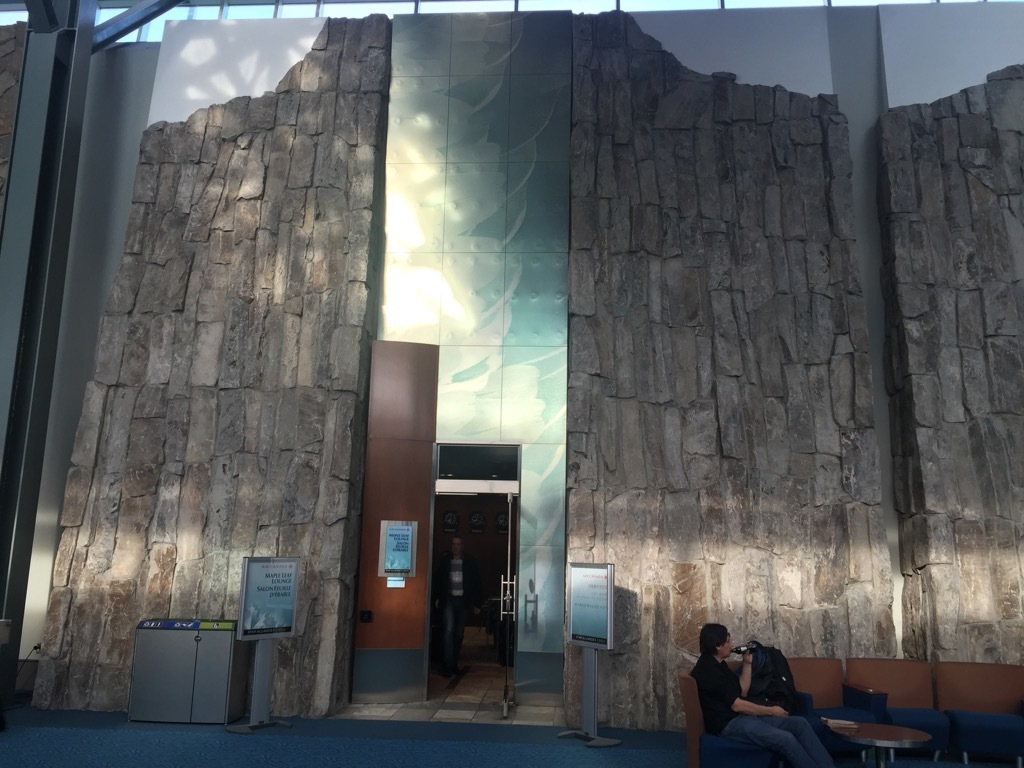 The Domestic Maple Leaf Lounge has an impressive face to it, but with only about half an hour until boarding, I decide to forego the lounge this time around, and get a little bit of walking in, since I’m a little bit stiff and restless with after the long flight across the Pacific.

Particularly at this time of afternoon, the sighting options at YVR are not great. You’ve pretty much got your choice of this Air Canada A320… 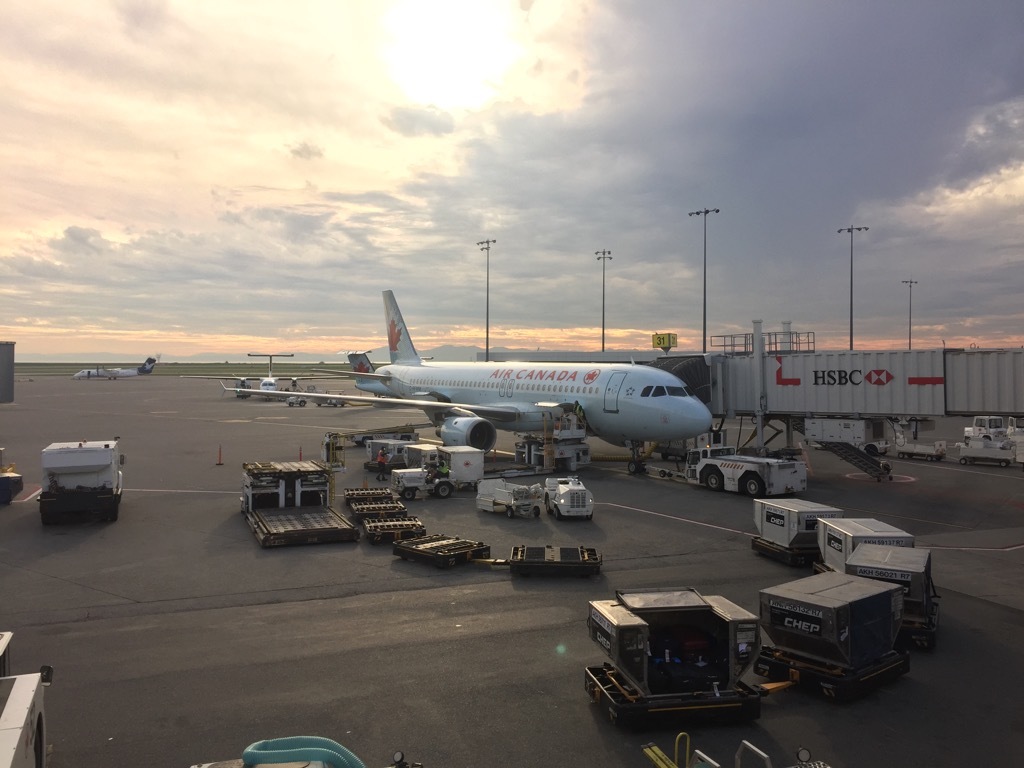 … or THIS Air Canada A320, which will actually be my ride back to Toronto this evening. 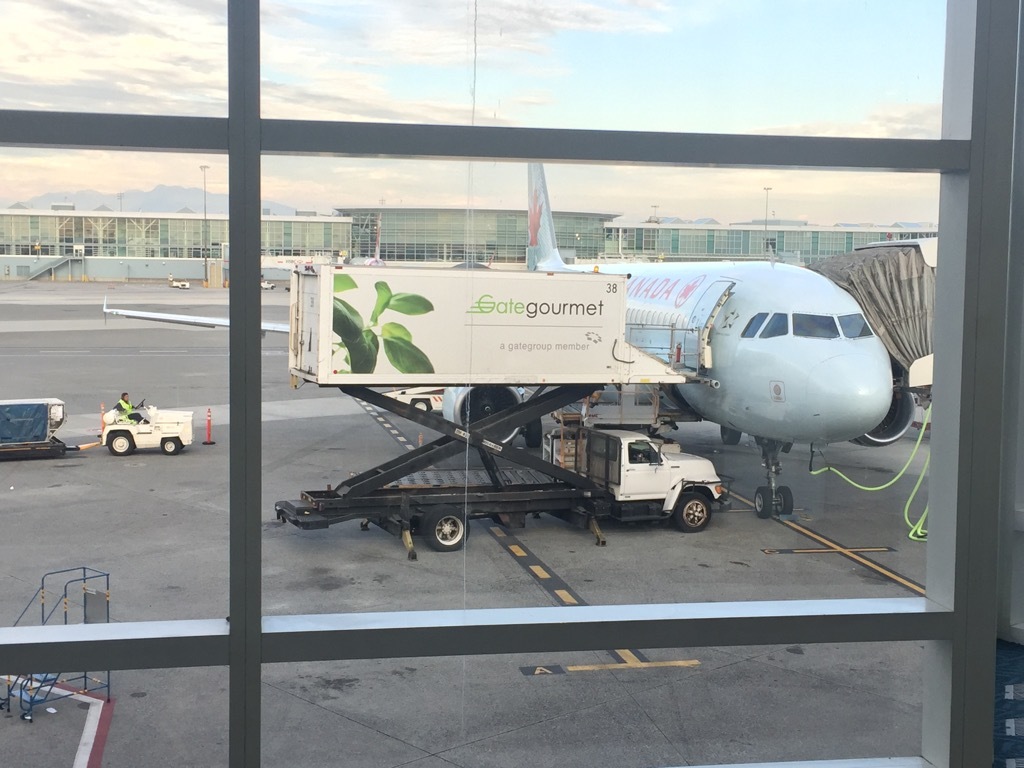 I grab a seat and do some writing on my YVR-HKG flight — yeah, getting a little behind already — and soon enough, priority boarding is called. I’m about the third person to board, and greeted by a smiling service director upon arrival. For this flight, I’m seated in 3A, the second row on the port side of the plane. There’s a closet that’s opposite 1 D/F, so that numbering system actually does make sense, believe it or not. The seat is pre-equipped with a tiny pillow, basically only suitable for use as a mediocre lumbar support, and that’s about it. 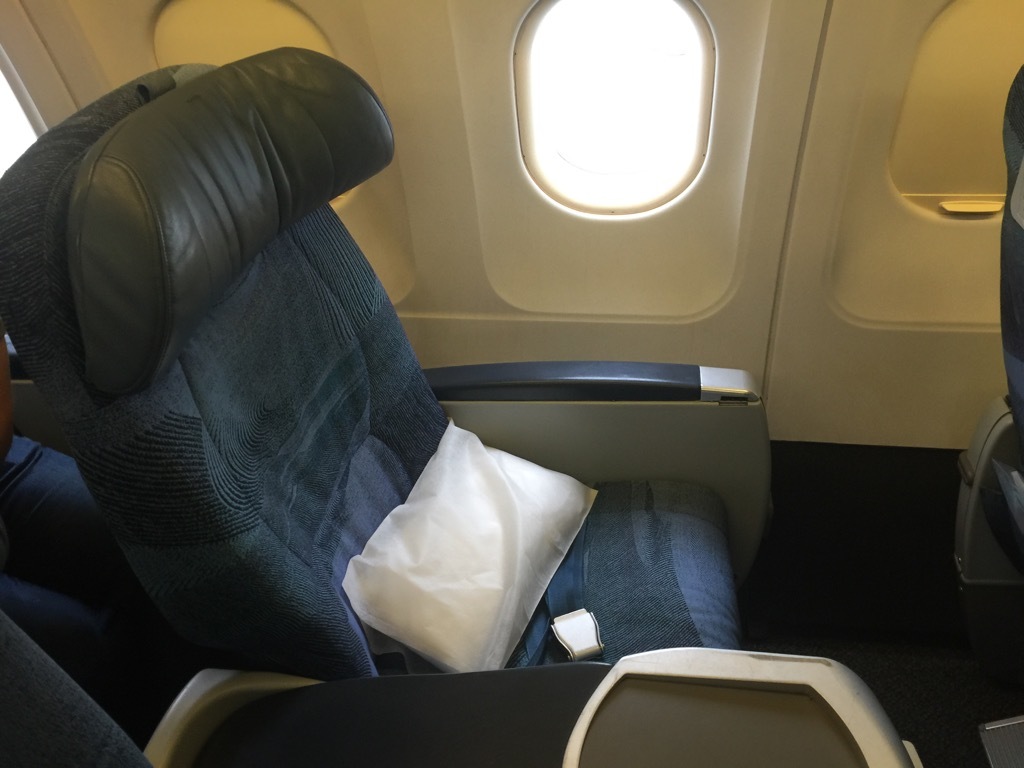 Legroom is adequate in J. 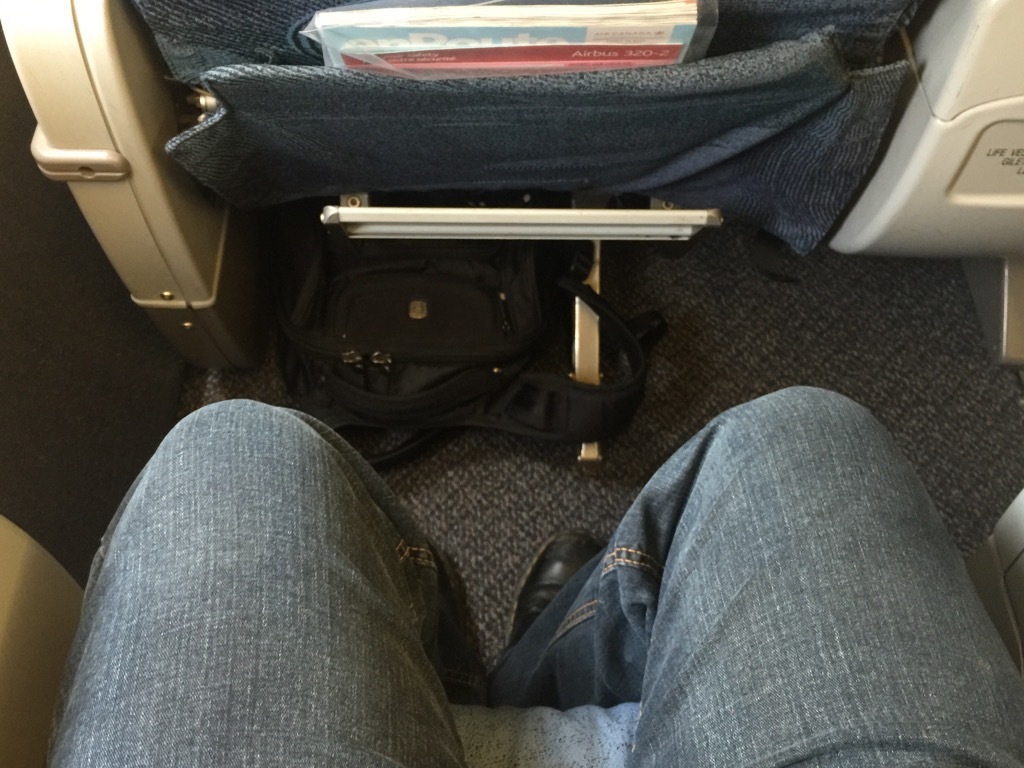 The recline control and a headset jack are in the armrest, with a convenient small pop-out tray for drinks in front of the centre arm rest. 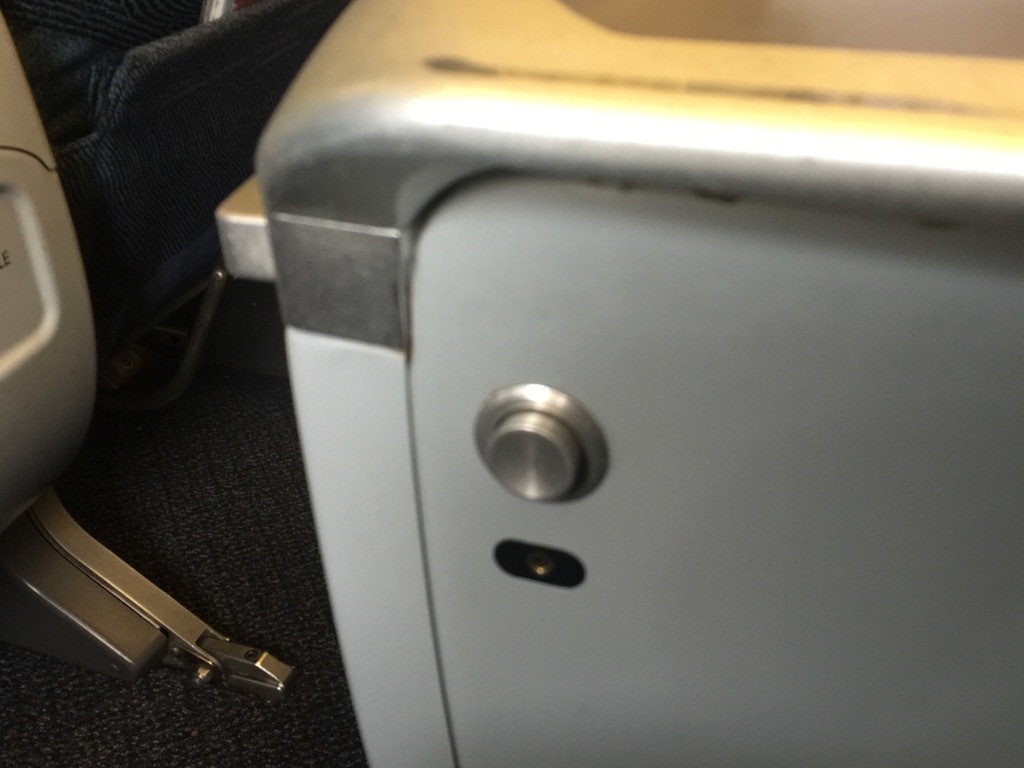 And power outlets (not quite this blurry in real life) are located between the armrests. 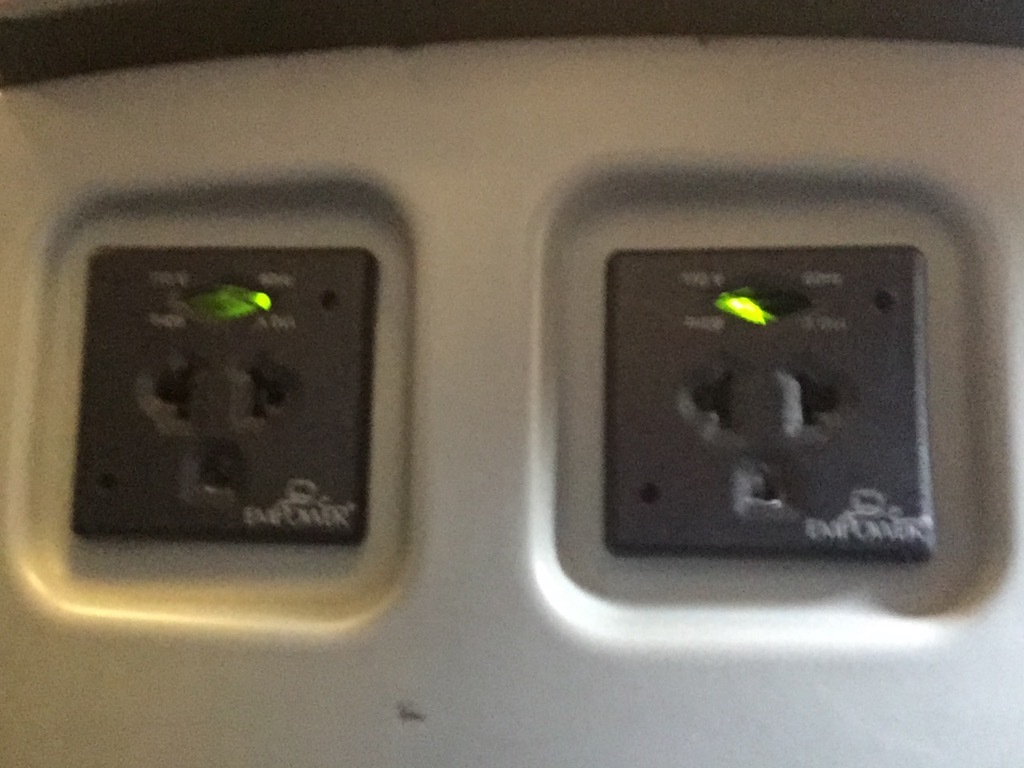 My seatmate takes his seat shortly after I do, and the cabin starts to fill up. Soon enough, it seems like we’re full. But we wait. I put on my earbuds (AC won’t allow anything in your ears other than earbuds connected to the IFE system below 10,000 feet) and cue up Jurassic World on the screen in front of me. 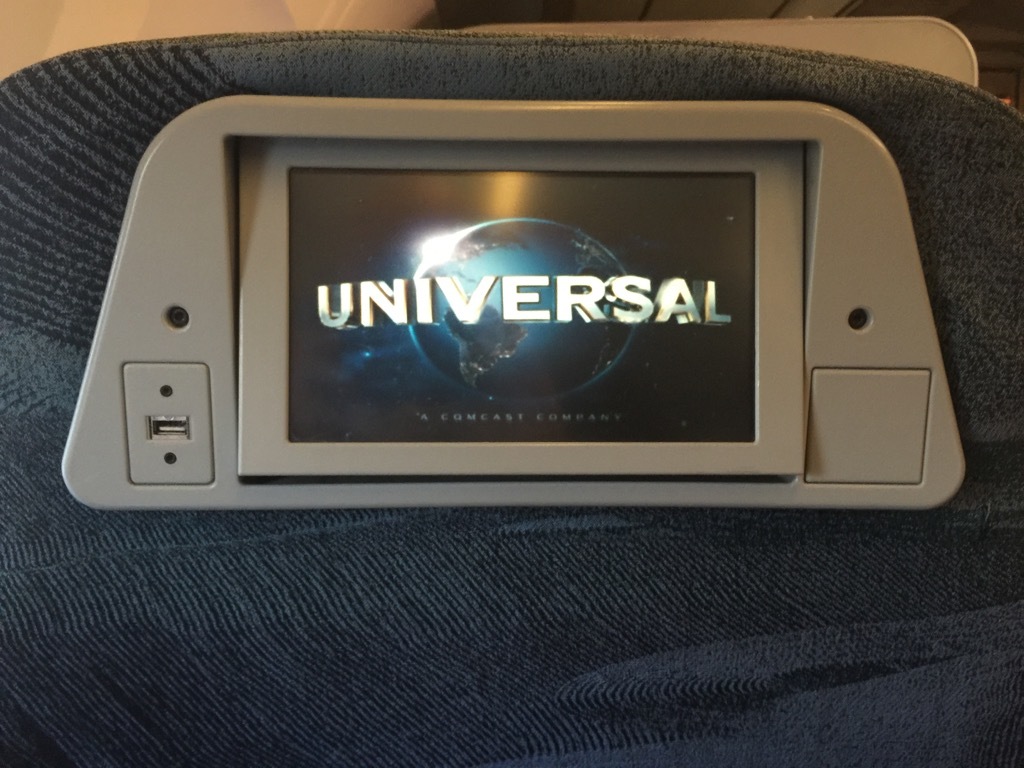 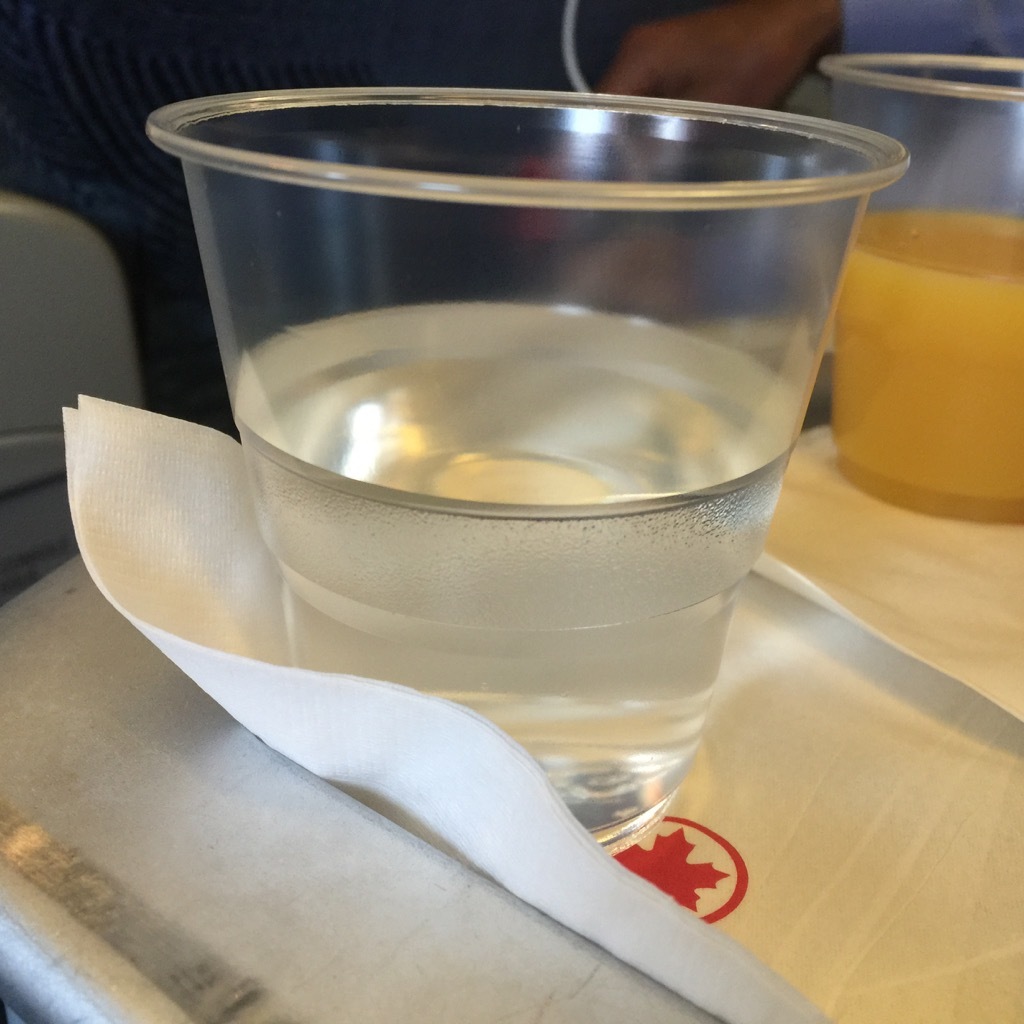 Pre-departure beverage choices of orange juice are offered. I go with water. The service director takes this opportunity to explain that we’re waiting for some passengers connecting from Hong Kong. On the same flight for which I was in the gate area well before boarding was called. By about half an hour. That’s how many seats there are on the AC 77P, and how backlogged transit security can get at YVR when a big bird or two arrives from overseas. I don’t have a connection, so I’m not too concerned. Other than with my inability to accept Chris Pratt as an action hero and now his goofy but lovable character from Parks and Recreation. But I digress.

Eventually, the remaining passengers show up and grab their seats. I’m glad they made it, it’s a long wait until the red-eye as the next connecting option to Toronto this time of night. We push back, and look at that, some variety! An AC 77W, likely making the aforementioned red-eye run, since it’s at a domestic gate, is parked next to us. 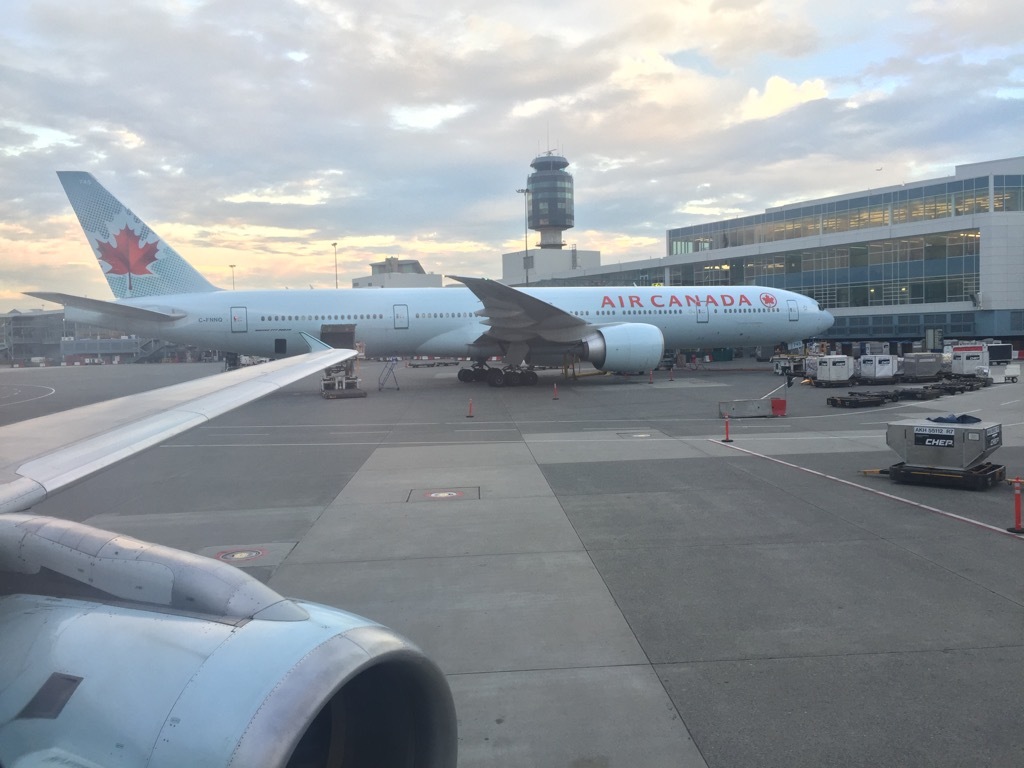 We taxi out to the active runway, and are quickly up up and away into the darkening sky. We start our roll past this WestJet Q400. I really think instead of calling their Q400 fleet WestJet Encore, they should have gone for truth in advertising and called them WestProp. But that’s neither here nor there. 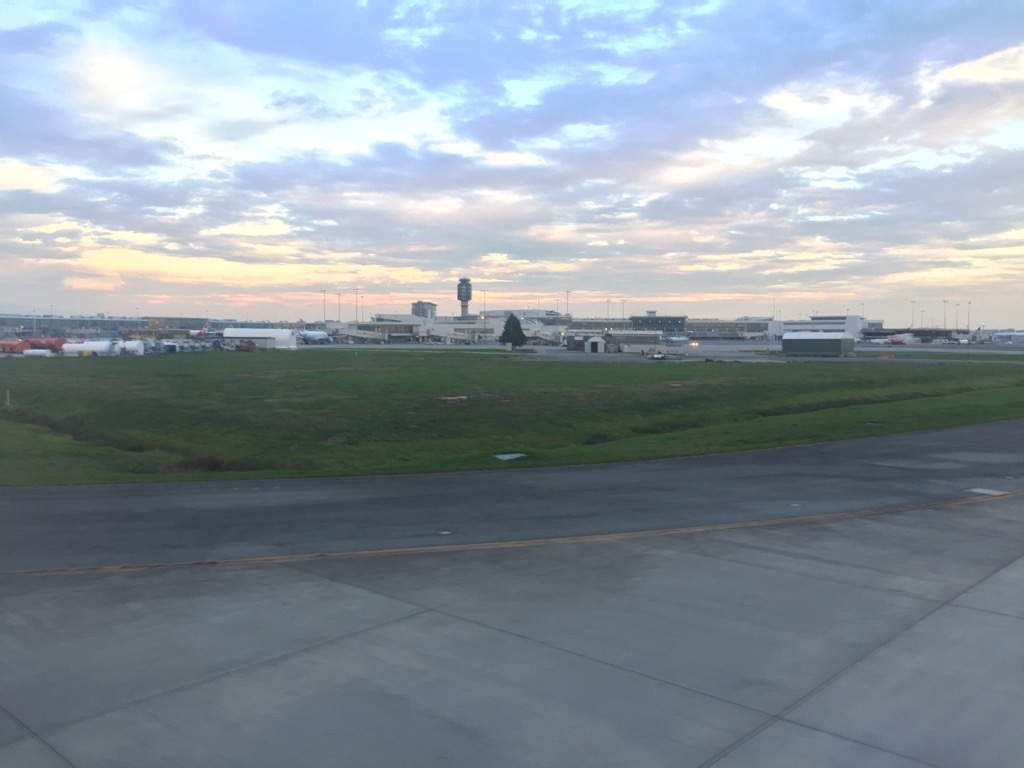 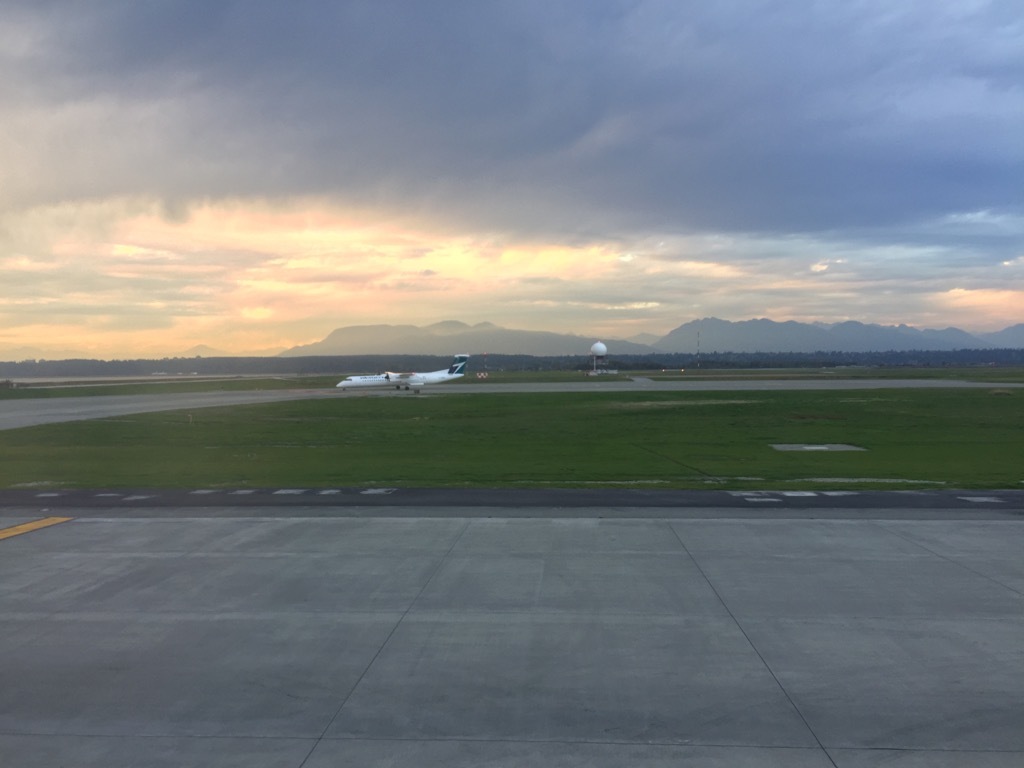 From there, it’s a short roll and we’re outta here, Vancouver. Despite it getting dusky, some pretty good scenes of the Vancouver area play themselves through outside my window until we break through the clouds. 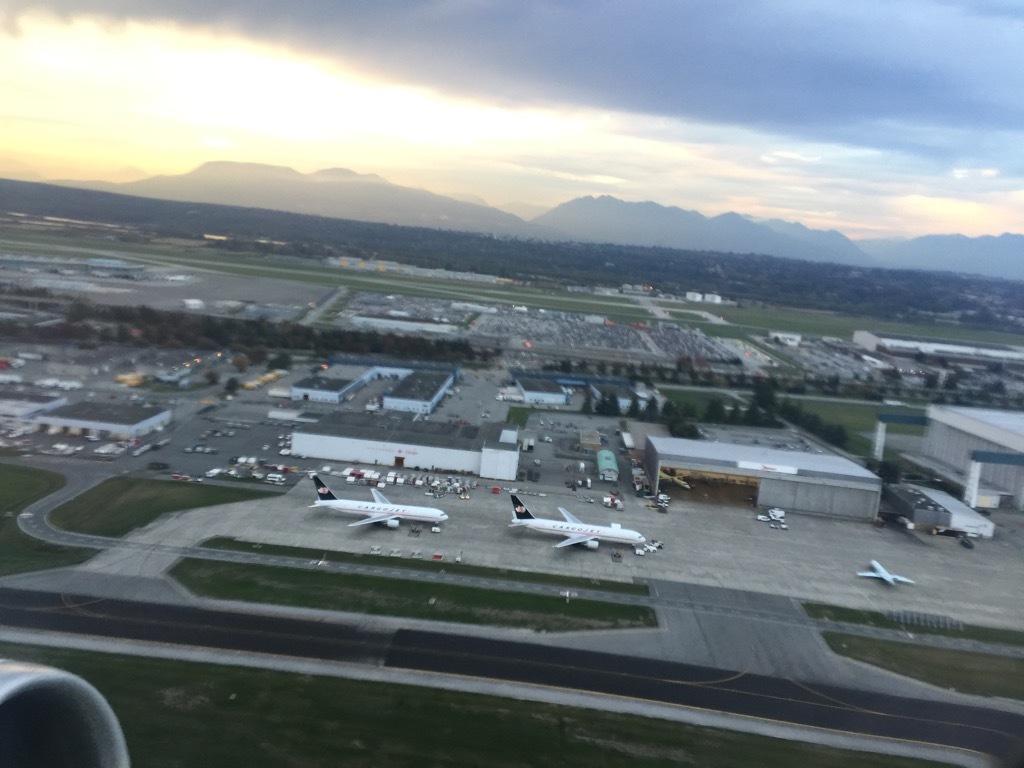 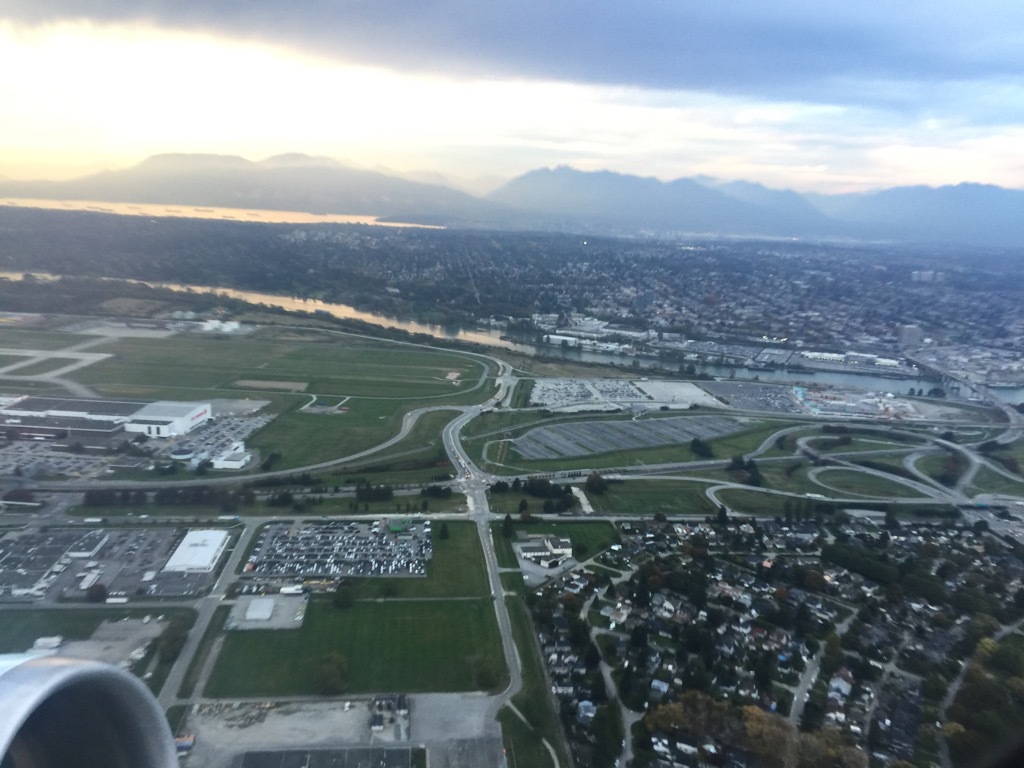 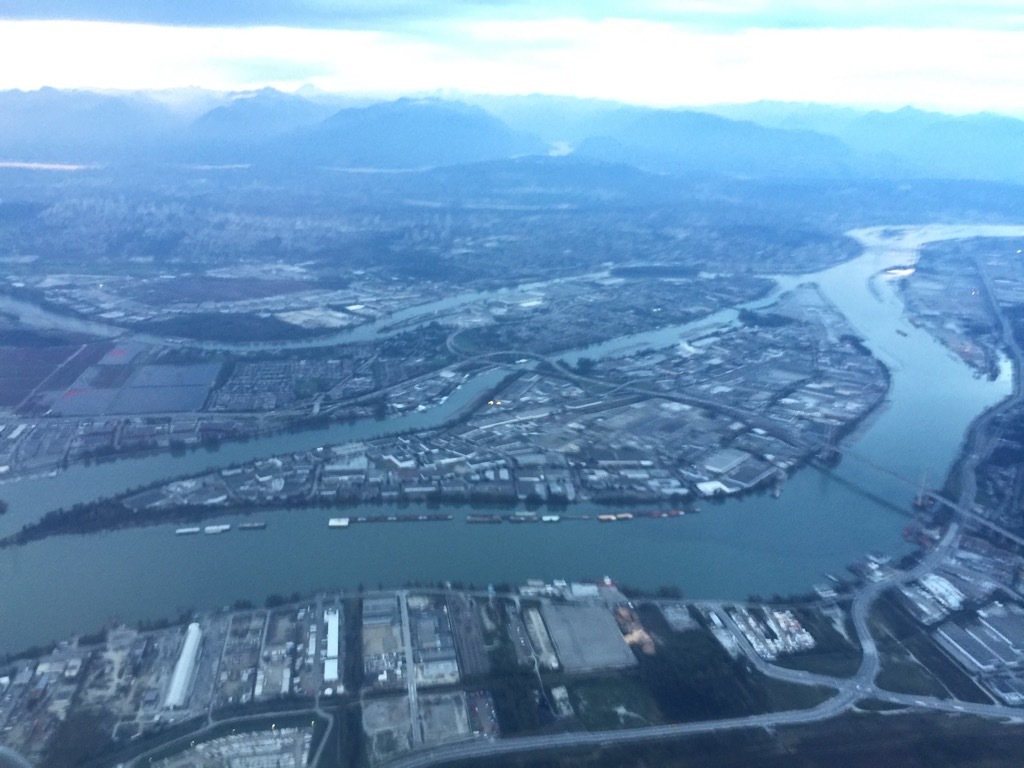 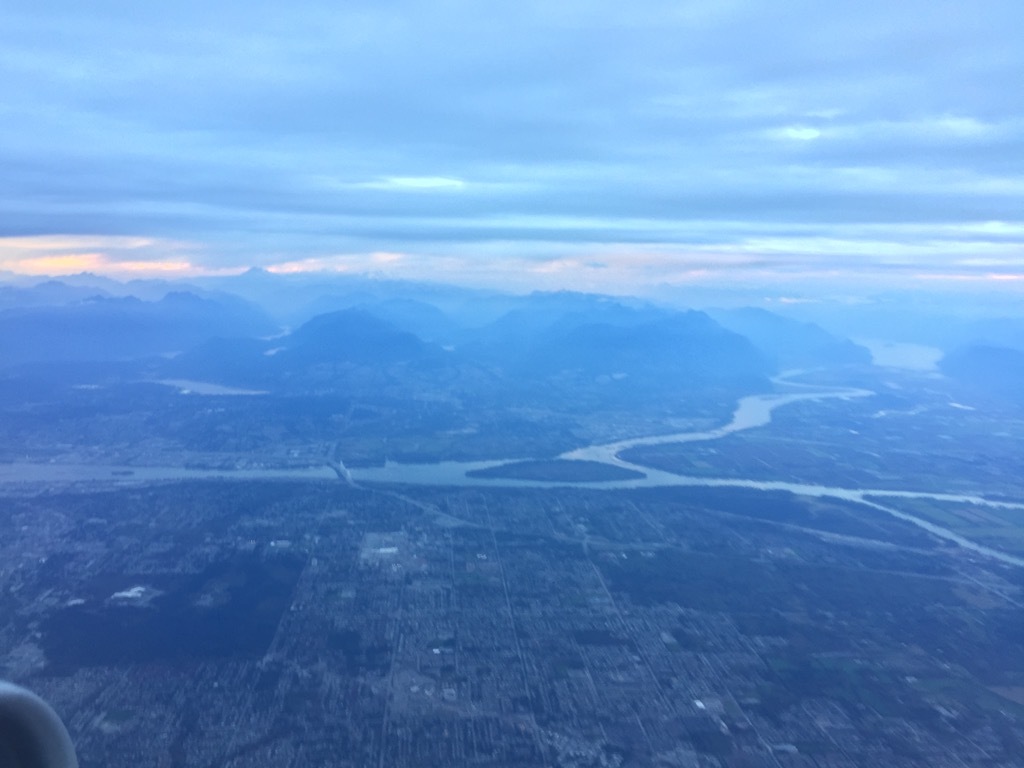 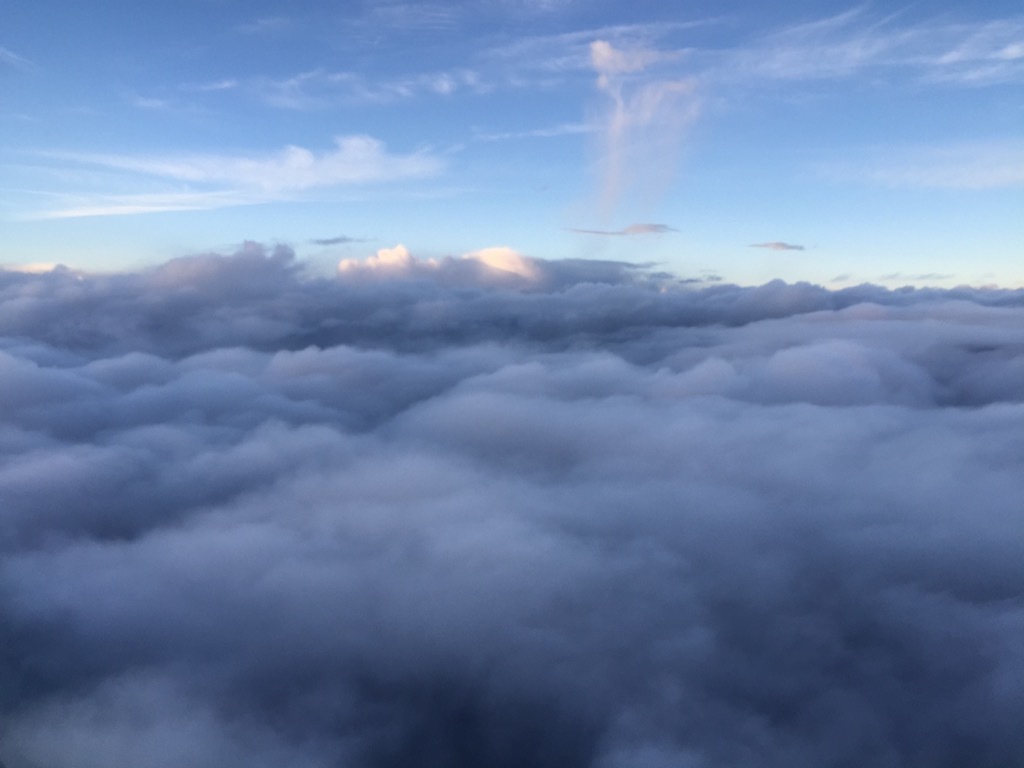 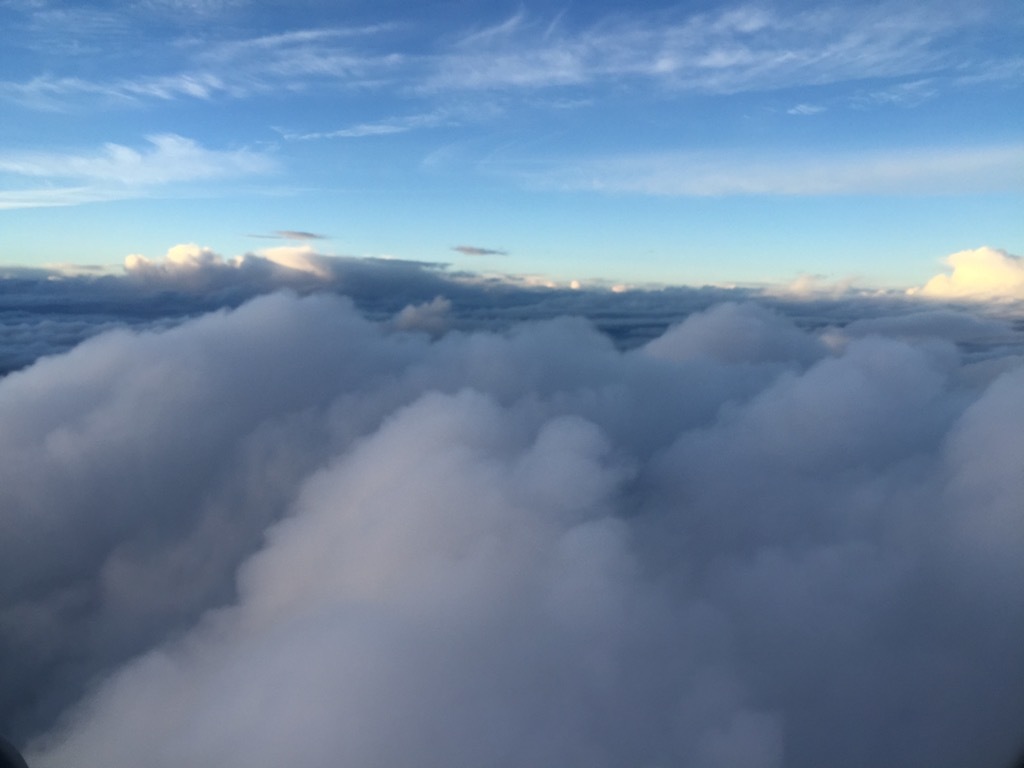 The SD comes through with hot towels, and at this point, finally hands out menus for the flight. Usually this is done on the ground, but hey, whatever. 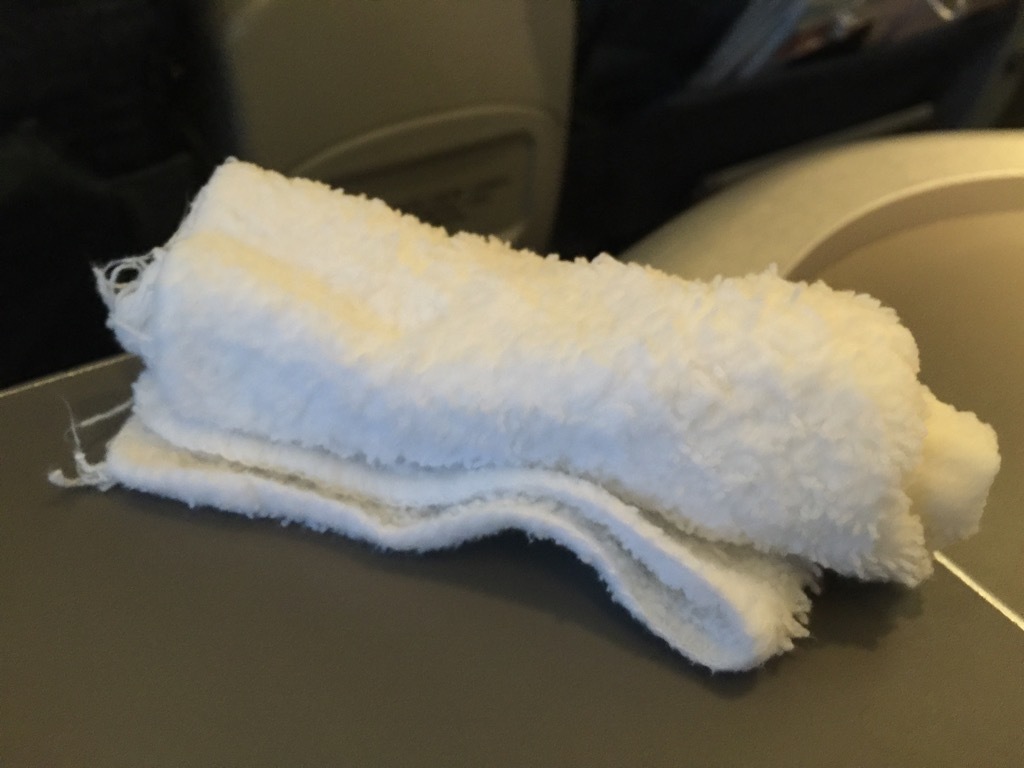 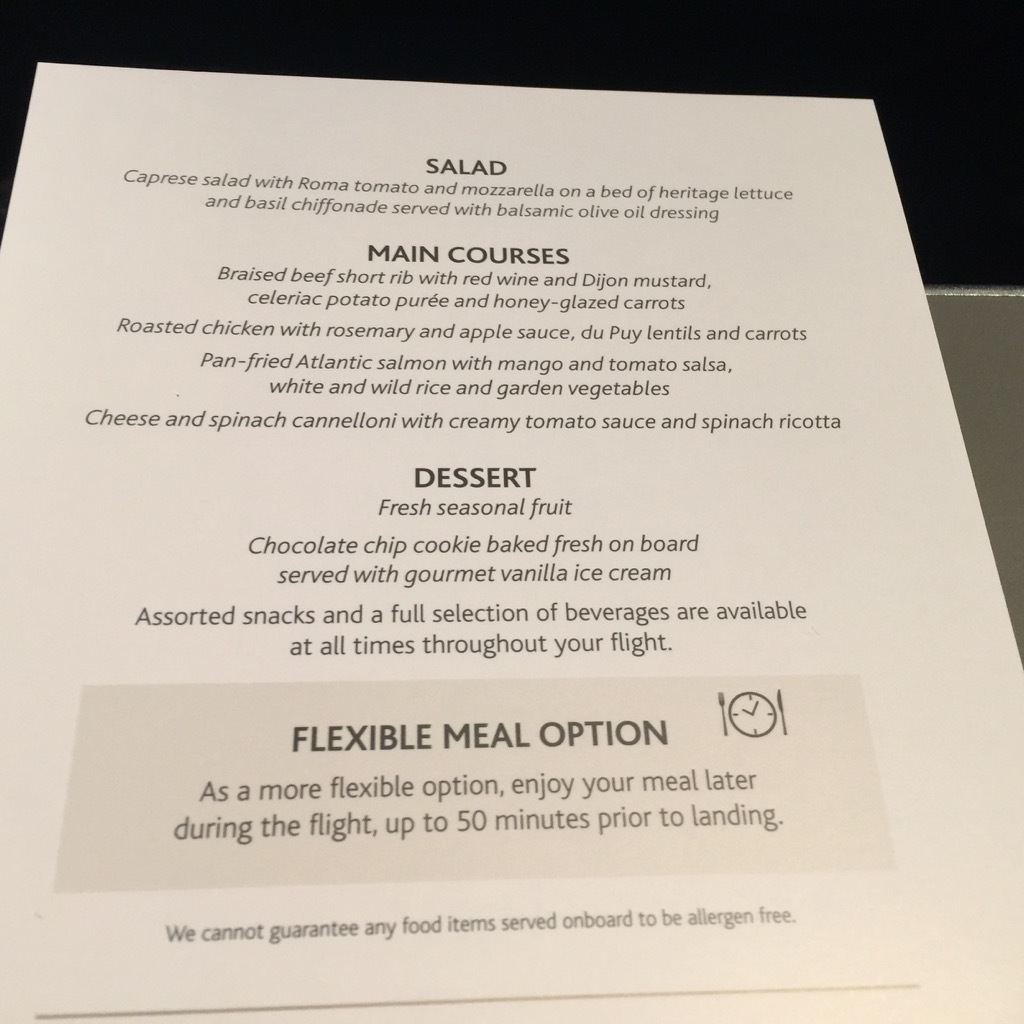 Bar service comes next, and I have my standard Caesar, accompanied by the omnipresent warmed almonds and cashews. Not that I’m complaining. Love ‘em. 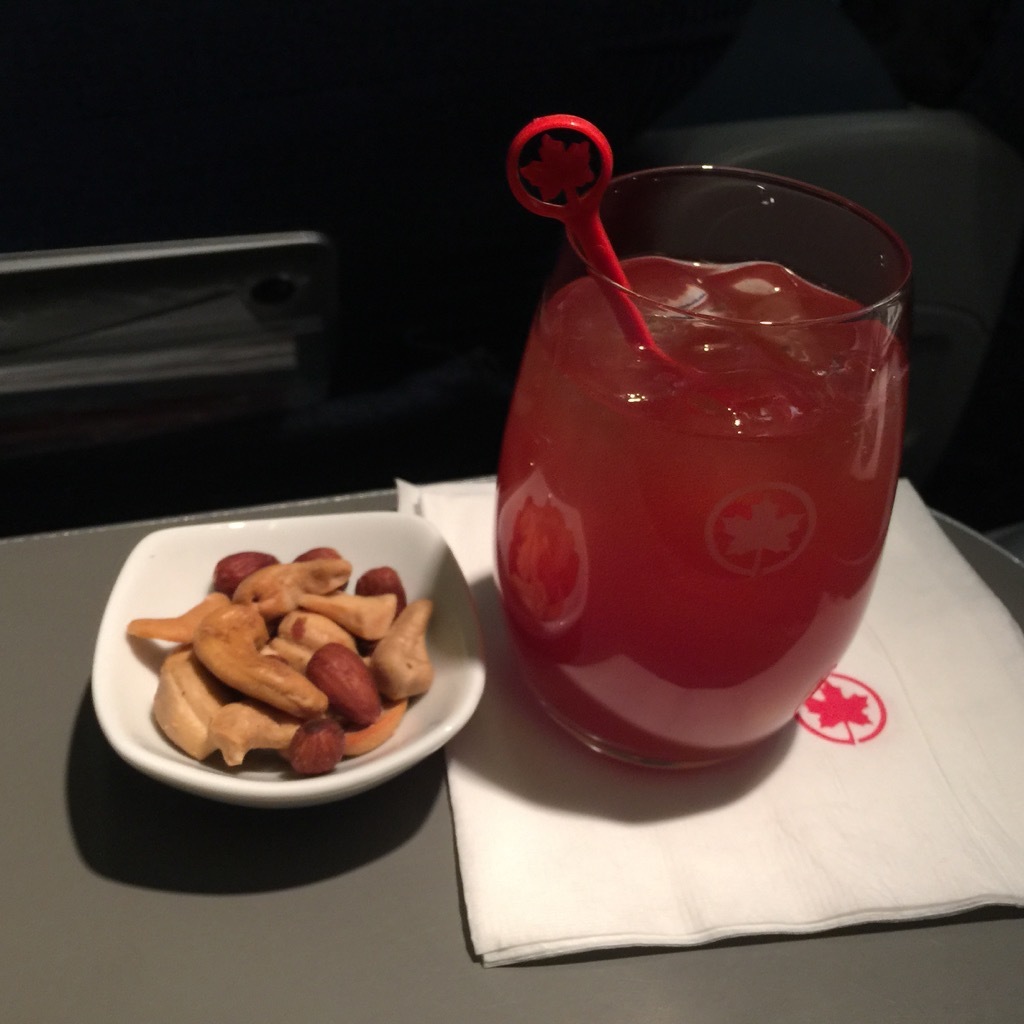 As the drink service is done, dinner orders are taken. I request the braised beef. It’s so unusual to see anything but the same old sometimes-good-sometimes-bad “tenderloin” steak on AC, so I’m looking forward to trying this. It’s odd, though, that the SD is taking orders row-by-row as we go. Usually, orders are taken by status, and generally on the ground. Especially with the delay in pushing back as we waited for passengers to arrive, I would have thought that wouldn’t be a problem. 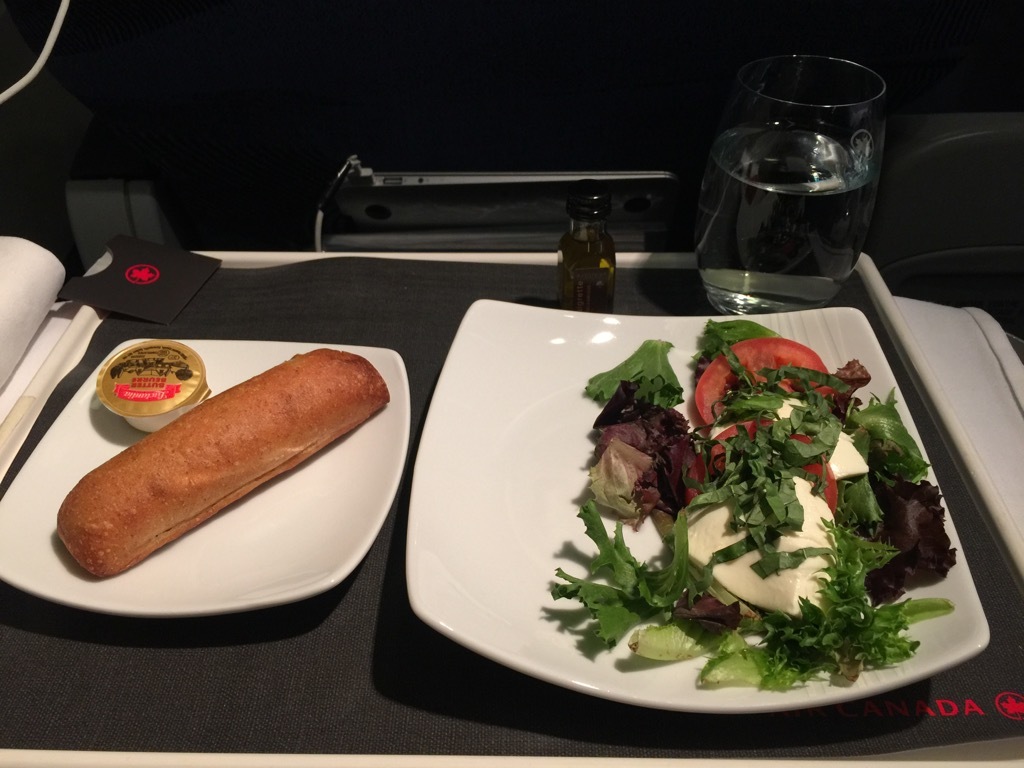 Next up, the service director brings around the dinner tray, which features a caprese salad. A choice of the usual mediocre AC breadsticks — white or whole wheat — is offered. They really need to change up their bread on domestic/transborder flights. No complaints about the salad, though, it’s such a nice change from the mixed greens-heavy salad AC usually offers.

The service director clears away the salad dishes, and comes back with entrees. My seatmate gets his beef, but then the service director makes a sheepish smile at me before admitting he made a mistake in counting entrees, and he has the chicken for me. Or I can have the pasta if I’d like.

I immediately jump to my feet, enraged by this snub of all snubs, and shout “DON’T YOU KNOW WHO I AM?!?!?!” in my loudest, most important-sounding voice. Or… maybe I just kinda frown a little and say “The chicken will be fine, thanks.” One or the other. You decide. The SD again apologizes for the mistake as he passes over the chicken dish. 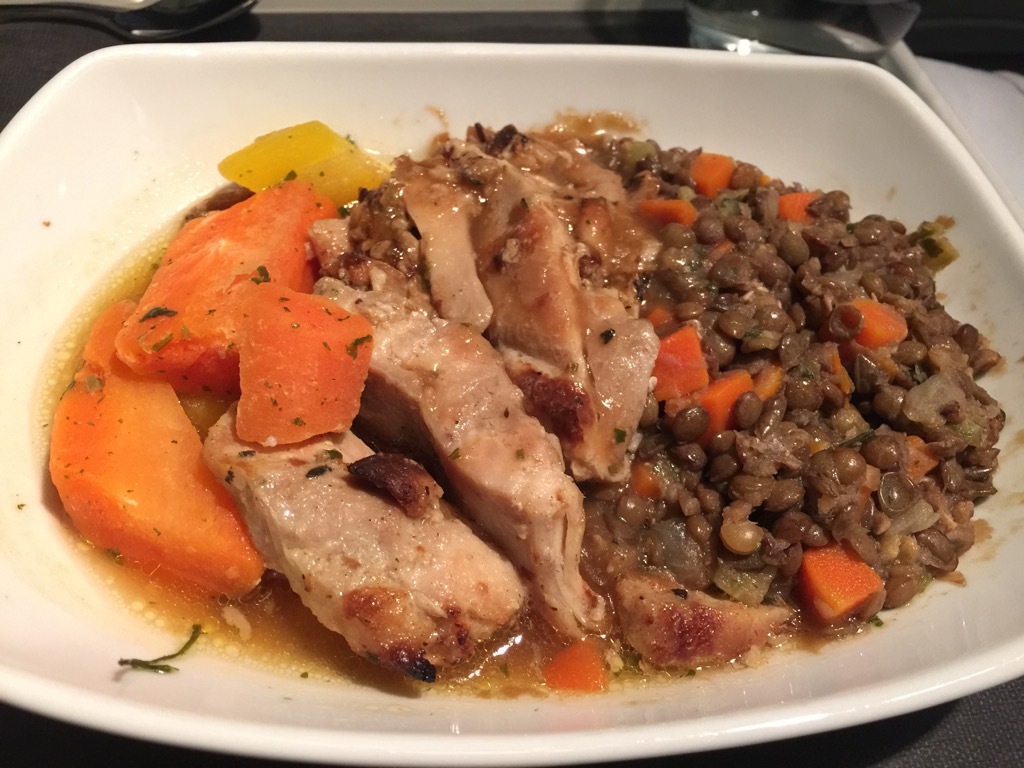 As much as I was looking forward to the new type of beef, the chicken is just fine, especially because I really like lentils. The sauce is nice, light with a little bit of sweet and a little bit of savoury. All in all, quite enjoyable. Still wish I’d had the beef to try, though.

As dinner wraps up, we’re already over Saskatchewan and making good time towards home. 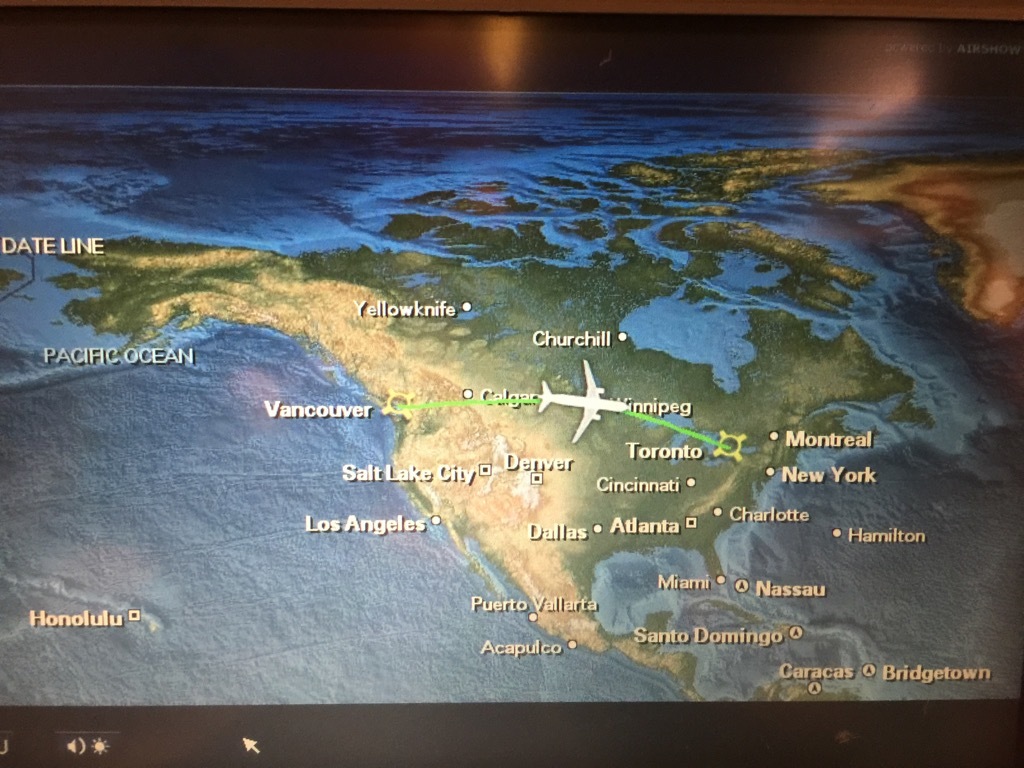 As this is a “premium long-haul” domestic/transborder flight for AC, that means cookie and ice cream for dessert, and that’s always something of a treat. Unfortunately, a couple of years ago, they changed it to cookie and ice cream from cookies and ice cream, and ditched the raisin oatmeal cookie that used to accompany the chocolate chip. Still, a very nice dessert, and while the idea of baked-on-board cookies on a flight is a gimmick, it’s a good gimmick. Mmmmmm. 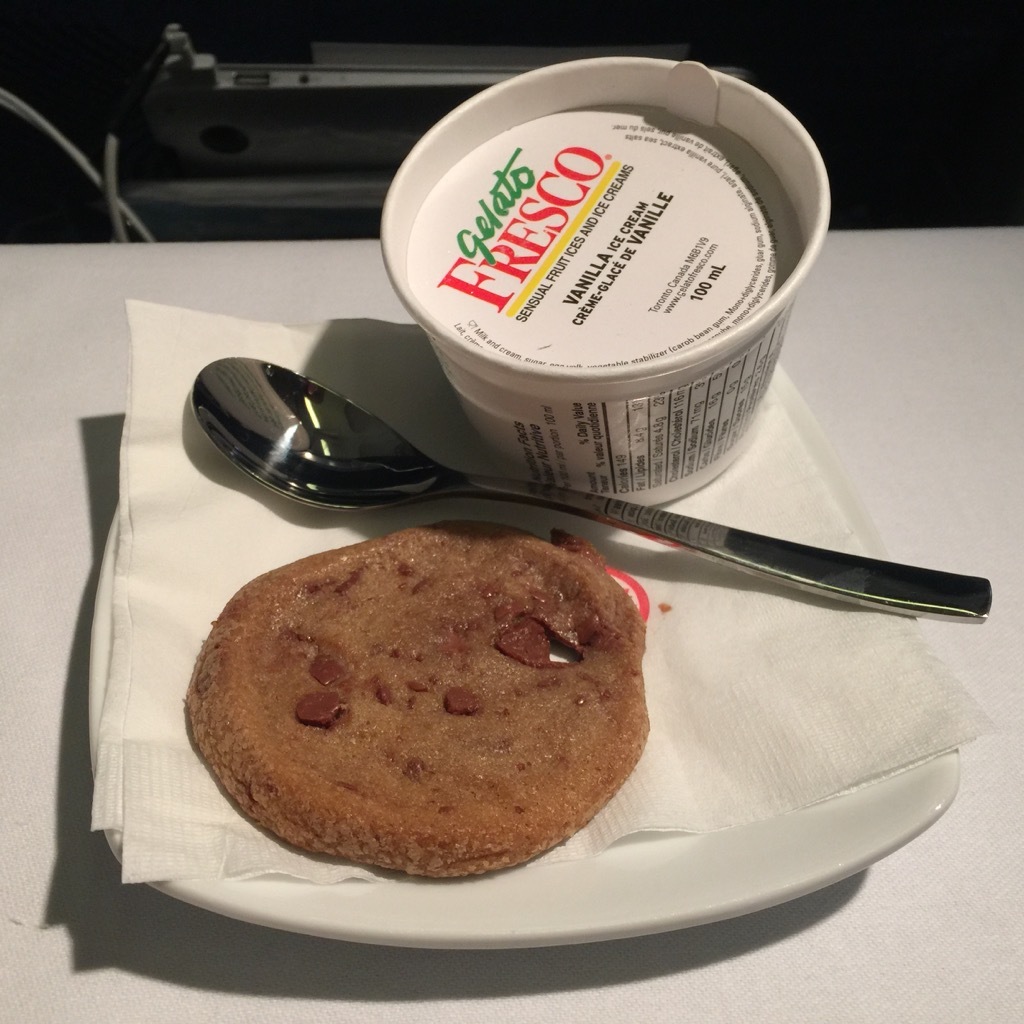 With dinner done, I relax for a little bit and play some Out of the Park Baseball to pass the time. In surprisingly short order, the SD comes around with the snack basket of chips, chocolate, etc. I grab a bag of Miss Vickies, and request a Coke Zero. 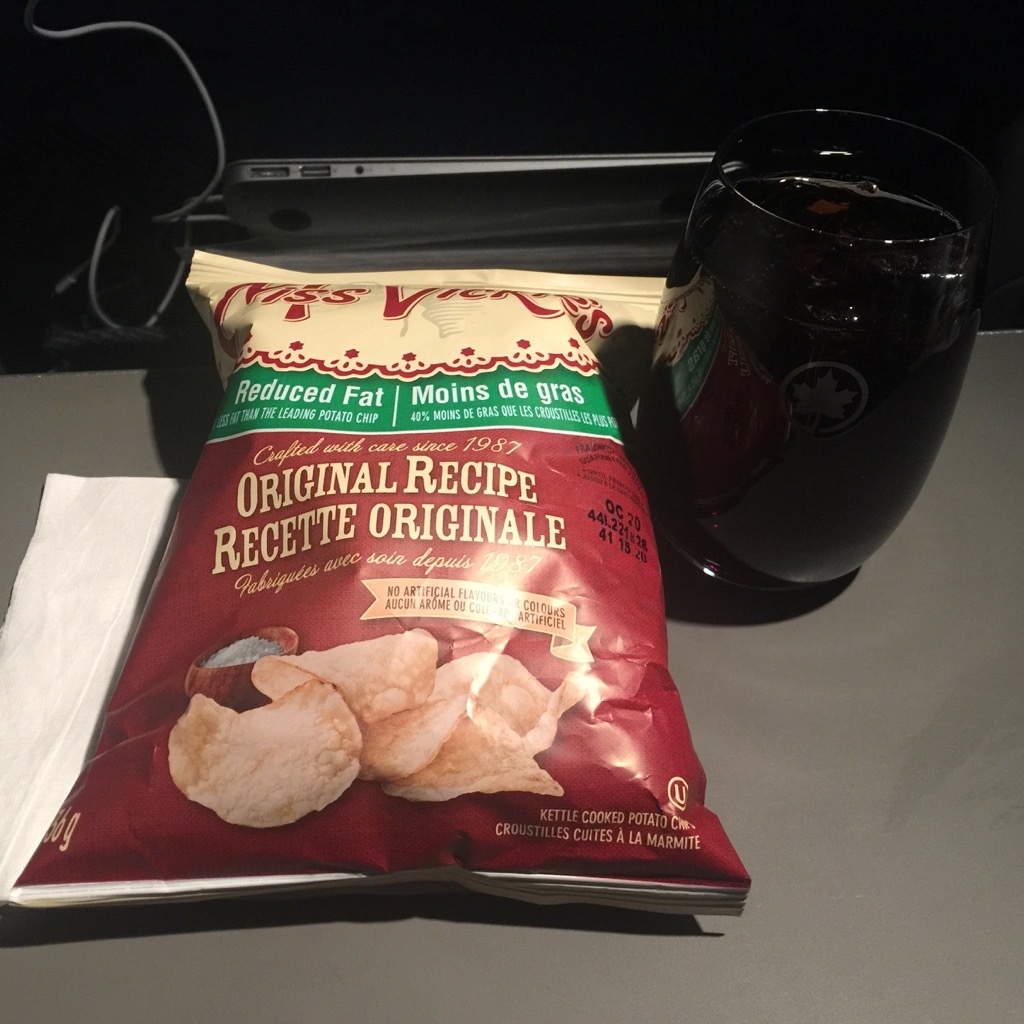 Snack complete, it’s time to clean up the plane and get ready for landing. As one might expect, there’s not a huge lineup for landing at 1:00 am at Pearson, so quickly we’re on the ground, and we taxi into our gate pretty much right on time. 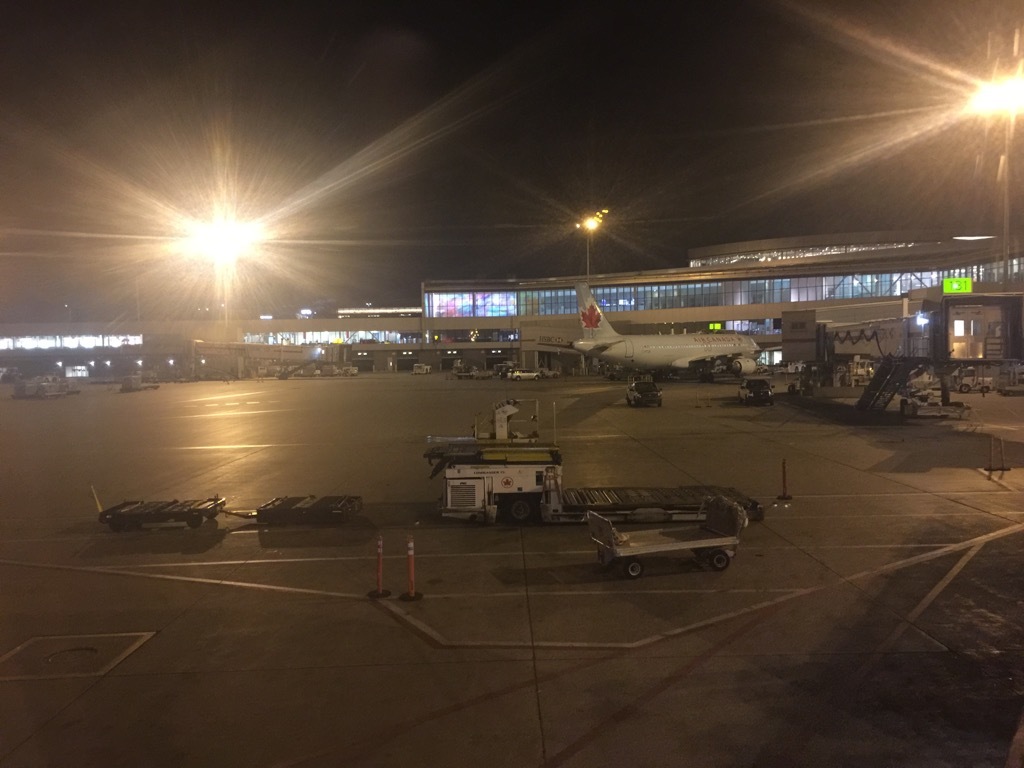 The front door opens, we’re bid goodbye by the service director, and let loose into the very busy domestic concourse at YYZ. 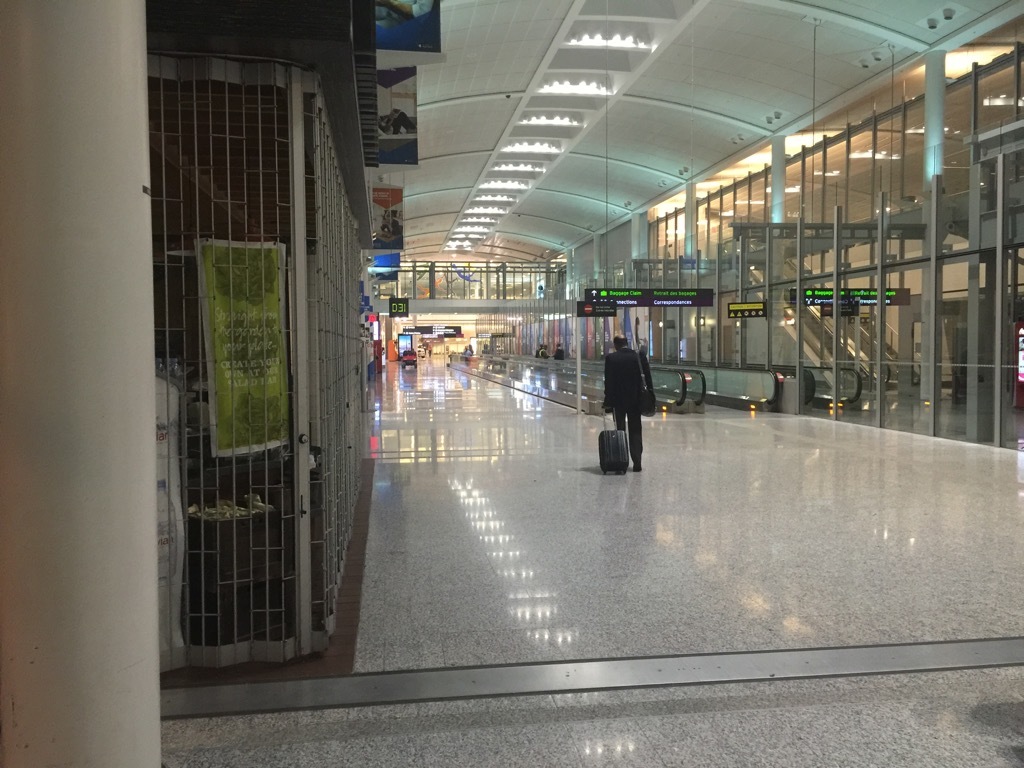 Yep. Standing room only around here.

And so concludes this journey to Hong Kong and back. I hope you’ve enjoyed reading along, and been at least mildly entertained.

We get to do this all again in a couple of weeks, with the international flights in Premium Economy. So be sure to check that out. And I might have something else before then, if timing works out for me.

Again, thanks for reading!
See more

All in all, a fine transcon, although it's not quite as much fun when you're not on a widebody... although as we'll see when I report on the next trip, if you want a widebody on this route late in the day, you're stuck with a redeye.

Service was pretty good, although it's a bit annoying when the service director doesn't follow the procedure, and then loses count of the meals he's already promised. Fortunately, the chicken was good anyway.

Thanks for joining me on this journey... I look forward to bringing you the next one!

The contributors of Flight-Report published 13 reviews of 2 airlines on the route Vancouver (YVR) → Toronto (YYZ).

The average flight time is 4 hours and 14 minutes.