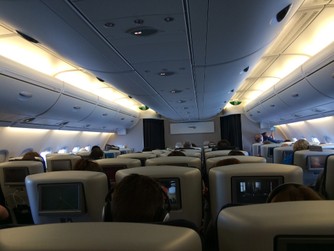 By suzi1991 5844
Published on 3rd November 2015
After not having posted a trip report for over 4 years, I have decided to share my recent experience with British Airways so that others can have an idea of what the airline offers. Apologies for the small amount of photos on this trip.

We arrived at Heathrow Terminal 5 early on the Thursday morning and found the terminal to be relatively quiet. Having originally been booked in to fly World Traveller, we asked about potential upgrades at bag drop. We were directed to the customer service/upgrades desk and told that were 2 seats left in World Traveller Plus for £229 each - happy days for an 11 hour flight!

We then breezed through passport control and security and on to the departures area for a light breakfast.

Our flight was on time and boarding onto the upper deck was very efficient. After settling into our seats (aisle and middle of row 68), the crew came round with orange juice and sparkling wine - a great touch we thought. There are only 3 seats in row 68 (which is a plus) but a major downside is that the toilets are either side of the row… Now, this would not have been a huge problem had they kept the curtain closed, but as it was open during the whole flight we had full view of the toilets the whole time. This was not a problem when the door was closed but people kept leaving it open which is really not pleasant when you're trying to eat and having to lean across to shut it every 3 minutes!! So be warned about choosing to sit in row 68.

That said, I was surprised at how comfortable and spacious World Traveller Plus actually was. The A380 sports BA's refit design which has thinner seats, thus allowing more space and comfort between the rows. The foot rest is a bonus, and after having endured 10 hours in a seat in World Traveller on an old 747 in 2010 which did not recline due to the very close proximity of the wall behind, I was so relieved to find that this time they had allowed more space between the wall and seat so we could fully recline.


Plenty of legroom! Then again I am only 5 foot 5…


As we were the last to be served in WT+, there was no beef left :-( instead, the crew gave us the starters and warm bread and asked if we would prefer to wait until Club World passengers had finished their meals and see if there were any leftovers. There ended up being 1 chicken and 1 beef left, and the kind gentleman in front of me that was also waiting for the beef told me to take it and he would go for the chicken. The food was fabulous. Beef was perfectly cooked and full of flavour. Also surprisingly filling given the size of the portion. Very impressed, British Airways.

After a couple more drinks, I settled into watching a movie and then getting a little shut eye time. BA provided nice little amenity kits with ear plugs and eye masks.

Now, I normally don't watch anything during a flight as I'm usually in a window seat with the in-flight map on my TV and the view out of the window to keep me entertained, but having sat in row 68 we couldn't see out of any of the windows which was a shame given that the flight was all during daylight hours.

I had the virtual cockpit view on my screen as we came in to land, and because I myself fly aircraft (much smaller than an A380) and am an 'avgeek', I talked my partner through the landing, as we had no window view, whilst the aircraft made all the familiar noises and feelings. I was only off the we are landing… now by 1 second ;-)
I hope that one day BA will have the external cameras that Emirates and other airlines have for passenger viewing.

All in all a pleasant experience with British Airways, with the only thing that would have made it an excellent experience would be choosing not to sit by the toilets in future.

Look out for my other trip report on the return leg from LAX to LHR in BA's Club World.
See more

The contributors of Flight-Report published 22 reviews of 4 airlines on the route London (LHR) → Los Angeles (LAX).

The average flight time is 11 hours and 13 minutes.