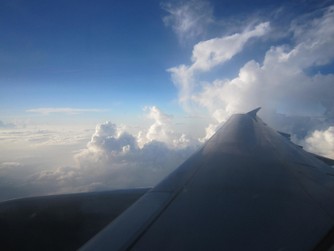 By Simmy1972 1825
Published on 18th December 2015
Time went so fast that it was time to say goodbye to Vietnam and go back home. We truly had an enjoyable stay in Saigon, on which we took up a day trip to visit the Mekong Delta.

Online Check In
Again, we utilize this convenience to check in a day before our scheduled departure. Unlike previous online check in experience, the website completed the process without allowing us to select the seats. Nor did the website allow us to change seats in our later attempts.

To Airport & Check In
After some last minute shopping, we checked out of our hotel at noon and flagged down two taxis to take us to the airport. 20 minutes later, we were dropped off at the international terminal and made our way towards Vietnam Airlines check in counters. A few tabs later, we were good to go.
We took up a corner at the restaurant to have a simple lunch and watch some planes taking off and landing. Soon, it was time to head to the departure gate, and it was when the real fun began.

Some spotting at SGN


Our original aircraft at gate


Boarding
As we approached the departure time, due to technical issues, a delay announcement was made. About half an hour later, apparently the problem was not going to be solved anytime soon. Therefore, another announcement was made to inform us of a change in aircraft. Therefore, all of us made our way to the new gate at the other end of the international terminal.
At the new gate, a gate agent approached me to borrow my boarding pass to test scan if the machine was correctly set up. Moments later, boarding began.

Flight
We eventually made our way to our seats, and soon we were pushed back to make way to the active runway. We held short of the active runway to allow an incoming aircraft to land before we turned to jet down the runway and took off.

Looking towards the domestic terminal


Making our way to active runway


Dinner was served immediately after the captain released the cabin crew. What’s on menu today was a choice of beef with potato or fish with rice as main, complimented with a spicy glass noodle and roast beef salad, fresh fruit, and bread roll. Again, water was served when meal trays were collected.


It was getting dark when we began our descent to KLIA, and eventually we landed safely at KLIA, an hour later than our scheduled arrival time.


This concluded our vacation at Vietnam.

It was another good flight on Vietnam Airlines, apart from the delay.
Overall, I think Vietnam Airlines is a pretty good airline. However, the hardware is a bit outdated if compared to other regional competitors. Will I fly Vietnam Airlines again to Vietnam? Most definitely!! Will I take them beyond Vietnam? It depends. The lack of personal entertainment system might be just too much for me to bear if the flight is more than 4 hours long. But then, if they could offer the equally attractive airfare like the one that we got, it would be simply too hard to refuse.

Simmy1972 is member of Flight-Report since September 2015.

He wrote 7 reviews about 4 airlines and 5 airports.