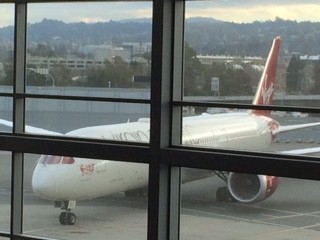 #3 out of 77 Airlines A minimum of 10 flight-reports within the past two years is required to appear in the rankings. 592 reviews

By MrMax 6591
Published on 7th December 2015
Welcome to my first Flight Report!

BACKGROUND INFO
This december I visted South Africa to visit my familly there (I'm half South African). We had two options for our flights, SAA via DKR and IAD (JFK and Accra on the way to JNB), or EK via DXB. We (for obvious reasons) went with EK. The main selling point for me was probably the A380. Anyways, here's my routing:


Before we begin, Some of my photos turned out upside-down. I apologize for this, please don't crucifie me in the comment section.

I tracked the inbound flight (EK225) on flightradar24 and it turns out my plane is A6 EOC. It's just over a year old, and is seen below at DUS (Dusseldorf): (I apologize for the invisibility of the registration)

I arrive @ SFO about 2 hours before departure. The check in situation wasn't great. I was waiting 30 mins approximately. Here are some photos.


The menu for todays flight is shown below:

We had some time to kill, so we used Priority Pass to get into the shared AF/KL lounge. It was quite deserted (interesting with BOTH AF and KL wide bodies on the apron). The spotting was limited, and the food was terrible. Here are the pics I got of the apron: The Boarding process was equally chaotic and was done by zones A-F, from back to front. I,am sitting at the very front of
the lower deck. And therefore in zone F. The boarding took a long time and was inefficient.


Here is my seat as I found it

Headphones. I find these headphones ugly, but they are comfortable, and good quality. On our next leg (spoiler alert) there will be better-looking headphones that fall apart!!!!!!


It contained socks, eye mask, and a toothbrush. They used to have a compact toothbrush that extended into a full length one. That was really cool. but now they have a normal toothbrush of lesser quality

The IFE was AVOD (of course). The selection was good, lots of nice podcasts. NextGen IFE has way better cameras and screens, but FYI the content/layout is the same (exept old IFE doesn't have undercarriege camera, witch is useless anyway) I'm very particular in movies and didn't find too many that seemed interesting, but the podcasts on EK are absolutely amazing! Please don't take this as me saying I don't like ICE. Its really great. The december content was a little sparse though. The janurary content was absolutley amazing.

45mins or so after takeoff (with was about 15-20mins late), dinner service commenced. EK does 2 carts at once. They give a drink directly after you are served a meal. You are also offered a drink with your meal, but the veriety of drinks on the meal cart is reduced. I chosse the Lamb Biryani because Etienne16 really enjoyed his lamb biryani on EK78 (He wrote an absolutley amazing FR on it: http://flight-report.com/en/report-4689.html). My entrèe is the lamb. For more info on why I chosse it, see my writing above. I found the starter bland, and uninspired. Etienne16's biryani looked drasticly different. Mine was more rice than anything else. And all I could taste was spice. There was very little lamb here. This dish seemed to be EK trying to be cheap, and have a dish other than the Paneer Korma tha would appeal to the Indian ex-pats coming him on this flight (The vast majority of the pax were Indian ex-pats returning home). I know that too spicy airplane food sounds a bit like a first world problem, but it was really terrible.

The dessert (Triple Chocolate Delice, whatever that means) My younger brother ordered a CHML, here's a photo I took: 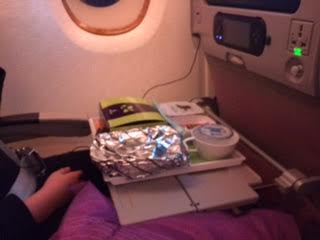 This was a chocolate cake surronded by mousse. It was extremely good. Words can not be used to describe how good it was. One good dish after two not-so-good ones.

After dinner I asked to try the chicken option. My request took about an hour to fulfill. I find this VERY inefficient of the cabin crew. The chicken & mushroom mixture was nice and creamy, yet bland. The vegetables and pasta were well seasoned. Overall, probably a better entrée than the Lamb Biryani. But it's the opposite of the lamb, because it was a little too bland for my taste.


A pic of the cabin mid-flight: As mentioned in other FRs. The windows of the 388 are really weird. It's a 788 style window on the inside that looks out into a window that's a little smaller than usual. I'l ding airbus not EK for this one.

Mid-flight, a pizza was served The pizza was OK, but not great. I was really hungry at the time, so I ate it at an impressive speed.

The mid-flight buffet offerings on EK are not so great. Just under-ripe fruit, chocolate, OJ, and water. They can probably learn from LX. LX has mutch more, including semi-substantial things like cups of soup. LX catering is as good as its reputation.


The bathroom was of good size and cleanliness. Perfectly adequate. I really like the design of the wood. I don't find it as gaudy as the rest of the wood that EK uses (I find the walnut in J and F very distasteful). 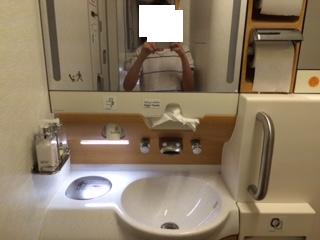 About 1h 45mins before landing, breakfast was served.

Our position at breakfast: A note on timing:
When we were over Europe, the sun was rising. Yet It was 4:00am local time, being over Norway ;).
Yet EK couldn't serve breakfast at that time in the flight, so they waited. Now the sun is setting and we are over Iran. It feels like a good time for breakfast in your body clock because sunset looks like sunrise, so hats off to EK for the good timing. But right after breakfast the sun goes down and you think What?! I just had breakfast, and now it's dark?. So that was wierd. I have heard some complaints about serving breakfast in the evening for flight EK216, a LAX-DXB flight with similar timing, and for EK226 too. Both FRs accused EK of cost-cutting, which I think might also be true.

Here is the menu for todays flight again: (FYI: On EK's website you can get the menu for your flight. So you don't have to take pics on the plane, take a screenshot from your computer.)

For my breakfast, I chosse the scrambled eggs. I find it kind of redundent that there's an ommelet or eggs choice, why not ommelet or pancakes, or something like that. My entrèe without the tin foil: I forgot how great hot breakfasts are. The scrambled eggs were nice and creamy. The spinich was flavorful and rich, not bland like you would imagine. The tomato and the sausage were both flavorful and juicey; the two attributes I look for in both items coincidentally. However the fruit was bland and unripe, like all airplane fruit. And the croissant was almost frozen, too processed, and was all around terrible. But the jam was good quality.

Shortly after breakfast, darkness fell. My IFE also started to malfunction. The FAs were really ineffective in dealing with this. Anyway, We arrived at DXB on time. Security was fairly efficient. DXB airport was a little gaudy in my opinion

Thank You for reading my Flight Report. Feel free to use the comment section.

Overall, a very good flight with emirates. The crew were nice and only very rarely a bit ineffective. The catering was mostly very good. The on-time performance, did however suffer a bit (both my flights departed late). The one thing that I really like about EK is the cabin. Our seats reclined very well and had REALLY generous legroom. In conclusion I think that EK is a genuinely good airline with good attention to detail and service.

He wrote 26 reviews about 15 airlines and 24 airports.