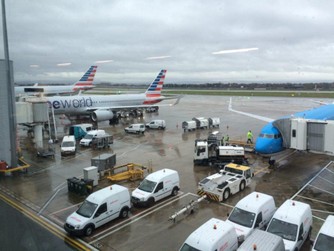 #31 out of 77 Airlines A minimum of 10 flight-reports within the past two years is required to appear in the rankings. 963 reviews

By BobbieD 1557
Published on 13th January 2016
Shortly before Christmas I travelled to Berlin TXL for the weekend to visit friends from MAN with KLM (returning with Airfance) via AMS (and returning via CDG).

The flights I took are as follows:

As part of this trip I'll also have bonus of a flight, the reasons for which I'll come to in that report.
MAN-SOU BE874

Skyteam flights depart from MAN Terminal 3, which requires a bit of a walk from the airport station. I had no hold luggage so proceeded to the security check with my hand luggage. This passed without any issues and I was soon airside. It was quite busy that morning in T3 and as I had been up early I needed some food. I chose to go to a small cafe and ordered an egg and cheese muffin and a tea.

Not the most sophisticated of food but it filled a hole. It was also very hot.

I had a little time before my departure and took the opportunity to do a bit of spotting.

There were a coupling of AA flights heading to JFK and PHL (hence the busyness) as well as the usual Ryanair.


It was soon time to board. Boarding proceeded with Skyteam Elite etc passengers first (this is now going be me on my new trip :D )


I boarded the plane and was greeted onboard and took my seat in 21A.

In the seat pocket were a couple of magazines and the safety card.


We were soon on our way on time.


Once we were up in the air the service began. I was pleased to have a relatively decent meal (not just the nachos!)

I love the little boxes and the cups with dutch pictures on them.

The short hop over the North sea was soon over and we arrived in AMS.

A pretty normal flight here with KLM. I was pleased to get a snack that was a bit more substantial than some of the ones I've had previously with KLM. The crew were pleasant but nothing to write home about.

The contributors of Flight-Report published 9 reviews of 2 airlines on the route Manchester (MAN) → Amsterdam (AMS).