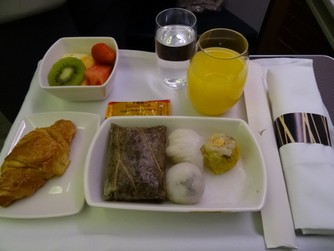 Sorry for the lack of pictures. I wasn't planning to write a flight report back then.

My flight from Beijing arrived at the North Satellite Concourse at HKG. Being the first passenger to disembark didn't make much difference other than being able to secure a seat on the shuttle bus to the main terminal. The bus didn't leave until fully loaded. Transit was efficient and required just a security screening. I then took the APM to the west end of the terminal, which is where Cathay Pacific The Bridge lounge is located. I left Los Angeles on Christmas eve. It had been 45 hours since I left home. Shower was the first thing I needed. It was only 40 minutes from departure, so I had to rush through my shower and a quick breakfast at the lounge. This is totally a first world problem, as I would have walked leisurely to the gate if I were in economy class. What a luxury to fly on a reverse herringbone Cirrus seat for such a short flight. Pre-departure drink was served and menu distributed. The mini cabin (rows 11-12), located right behind first class, is my favorite. After a short nap, the purser asked if I would like breakfast. Sure, why not! I opted for dim sum, which tasted pretty good. Having a meal on a such a short flight is another luxury. Halfway through my meal, I started to notice a flight attendant walking hastily back and forth on my aisle every minute or so. Then I realized she was checking on me, as it was almost time for landing. As soon as I finish my meal, she took away my tray, literally right away.

We landed at Terminal 1 at TPE, which was renovated a few years ago and looks pretty impressive. Kuo-kuang bus to town for less than US$4. The airport metro should be completed next time I'm back. A very pleasant experience for such a short flight. The Cirrus seat is a huge plus, compared to recliner seats that CX and other carriers use on other flights for this route. I managed to take a nap and have breakfast in just one hour. On the other hand, the flight attendants must be under tremendous pressure to get all the service done. Overall the crew was very friendly and efficient, as expected for Cathay Pacific. One point deducted for checking on my breakfast progress every minute or so - at least make it two minutes maybe?

I have visited The Bridge lounge twice, but didn't get to really enjoy it both times. I was sick the first time and rushed the second. I hope to be able to really enjoy this or other CX lounges next time I'm in Hong Kong.

This report concludes my adventurous five-segment and four-carrier flights from Los Angeles to Taipei. Reports on my inbound flights are coming up next.

He wrote 9 reviews about 7 airlines and 7 airports.