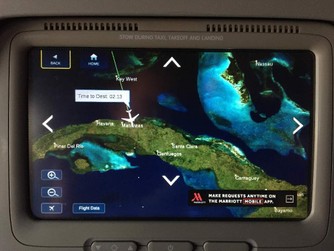 #35 out of 75 Airlines A minimum of 10 flight-reports within the past two years is required to appear in the rankings. 752 reviews

By 757Fan 1958
Published on 13th March 2016
In September 2015, my wife and I took a wonderful trip to Panama, and we also had some really good flights with Delta. I thought I would write my first report on this site about our outbound flight from Atlanta to Panama City. View of the busy activity at Atlanta from the F Concourse during our layover from Minneapolis. The service on the flight to Panama City was excellent. The Flight Attendants on that flight were awesome, and took care of us very well up front. I really do find the service with Delta to be some of the best I’ve had, and throughout the whole flight, they were always so kind and attentive to our needs and requests. After we boarded, a pre-takeoff drink of either plain OJ or Mimosas was offered. If people wanted just champagne, that was okay too. I didn’t get the name of the brand served, and I’m not a huge champagne fan, but it hit the spot. Dinner orders were taken while still on the ground, and as I’ve forgotten Delta takes meal orders from the rear – forward, we were lucky to still be able to have a choice in food. That night, it was a choice of chicken or pasta, and I chose red wine as my drink after takeoff. Atlanta is not quite JFK in the evening with long lines of planes waiting to leave, but we did have a short wait, before taking off to the west. The Queen being prepared for Paris … Sad that AF no longer has 747's in their fleet.

Shortly after takeoff, hot towels were offered, and I began to check out the in-flight entertainment on the portable IFE in the seat. The Delta 737-800 we were on had not gone through any cabin upgrades, so had the older, smaller size TV screens at each seat. Music and movie options were good, but seemed more limited it seemed, as opposed to a flight I had taken a month earlier with Delta on one of their newer 737-900’s. Maybe it was just the September selections didn’t much appeal to me …

Dinner was good, and we were hungry, so we ate everything on our tray. The chicken looked a bit bland and boring, but it was surprisingly okay with the lemon juice and squash. I wish Delta would upgrade the food more on these shorter range international flights with a bit more of a selection of choices, but it was still a decent meal. Desert was Ice Cream, and it was served separately after our trays were cleared away, which was a nice touch. The rest of the flight was smooth, and my wife and I relaxed, and prepared for our upcoming vacation. Landing was spectacular, as we passed by downtown Panama City on our way in, and could see all the lights of the city. Thanks for reading! Comments are welcome.

He wrote 5 reviews about 2 airlines and 9 airports.