#36 out of 72 Airlines A minimum of 10 flight-reports within the past two years is required to appear in the rankings. 4773 reviews

CDG Airport
I have already been in the airport since the A318 brought me there. Landing was at about 16:20 so I had plenty of time to spare until my next flight. A large part of that time was spent exploring the airport's Terminal 2F. I believe I walked through the whole thing a few times and I bought water and just a muffin to eat because I expected a snack on this flight. Time was passing fast because of the free WiFi (pretty slow but hey, at least it was free and it worked) and the size of the building - there was a lot to explore. Soon, I began looking for the shuttle bus that would get me to Terminal 2G out of which my flight would be departing, just like any other flight operated by HOP! or CityJet. The orange shuttle (or navette orange) was new and comfortable, very much in contrast to my experience at Hamburg Airport.

Although the ride was pretty short (only about seven minutes or so), I got to see a large part of the apron. Even to me (and I'm used to FRA), the airport seemed enormously big. Just look at this maze of jetways at T2F:

Alitalia's new livery as seen from the bus:

I arrived at the right terminal a few minutes after. The departures board didn't promise a great experience because they'd only figure out the gates 20 minutes before departure.

Unfortunately, even that didn't turn out to be true about my monitor. As fellow passengers pointed out, the gate was already displayed at another screen. So, off I went to gate G29.
Terminal 2G consists of two separate piers so I had to walk through a huge walkway to reach the building, where I was greeted with a great sunset that illuminated the building:

Boarding already begun so there was no queue at all. Another reason for this is likely the downgrade in equipment, from an E190 to an E170 (which was still plenty enough space). I scanned my boarding pass and headed outside. The views that I was about to encounter were simply incredible, with a CityJet Avro parked next to my E170: 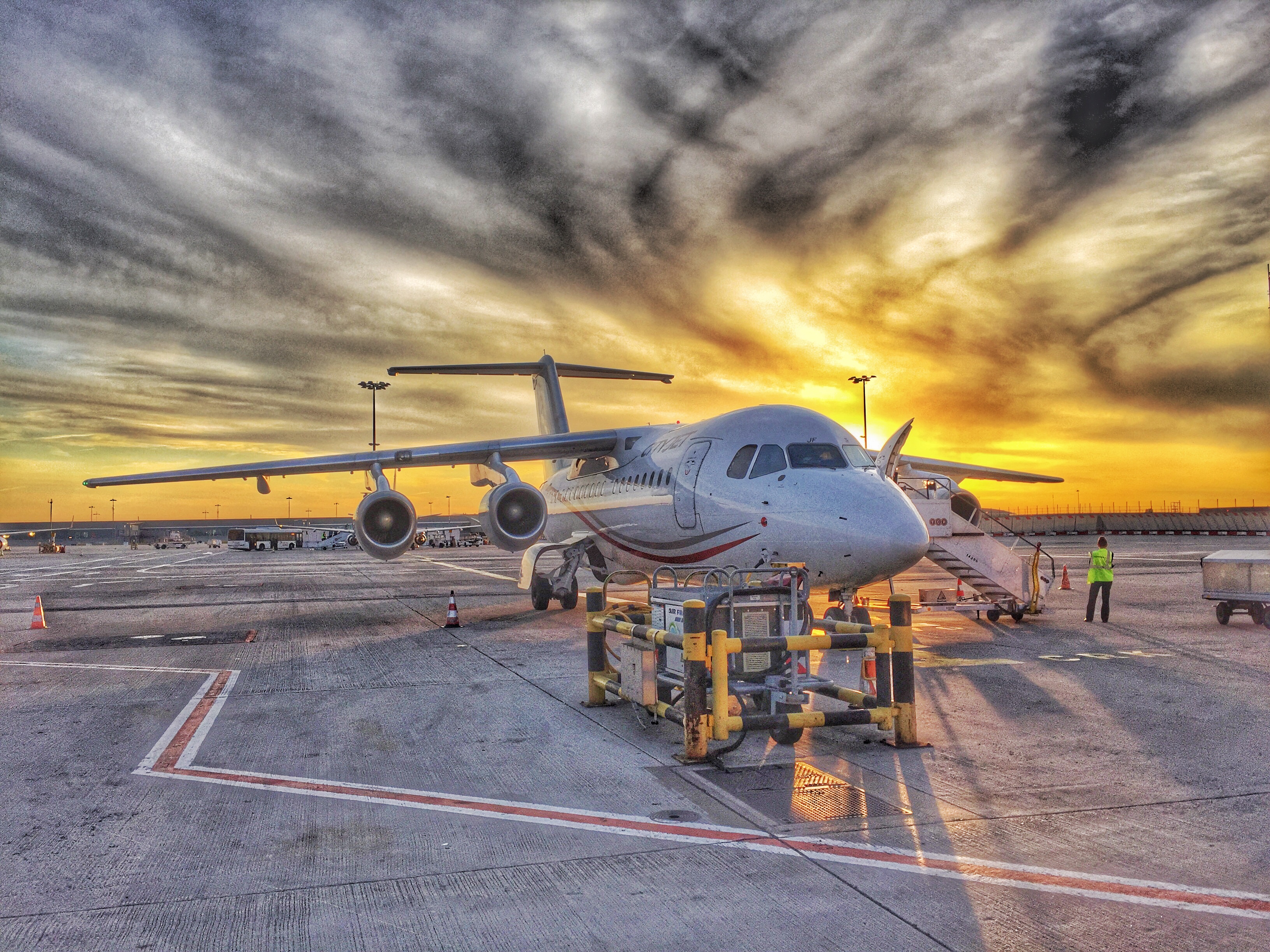 After a short photography session with my iPhone, I continued to board my plane, F-HBXP:

Again, I was greeted with a smile as I boarded and proceeded towards my seat (pretty far back due to the equipment change). This one was just as comfortable (which means very much so) as the one on the A318 that brought me to CDG. 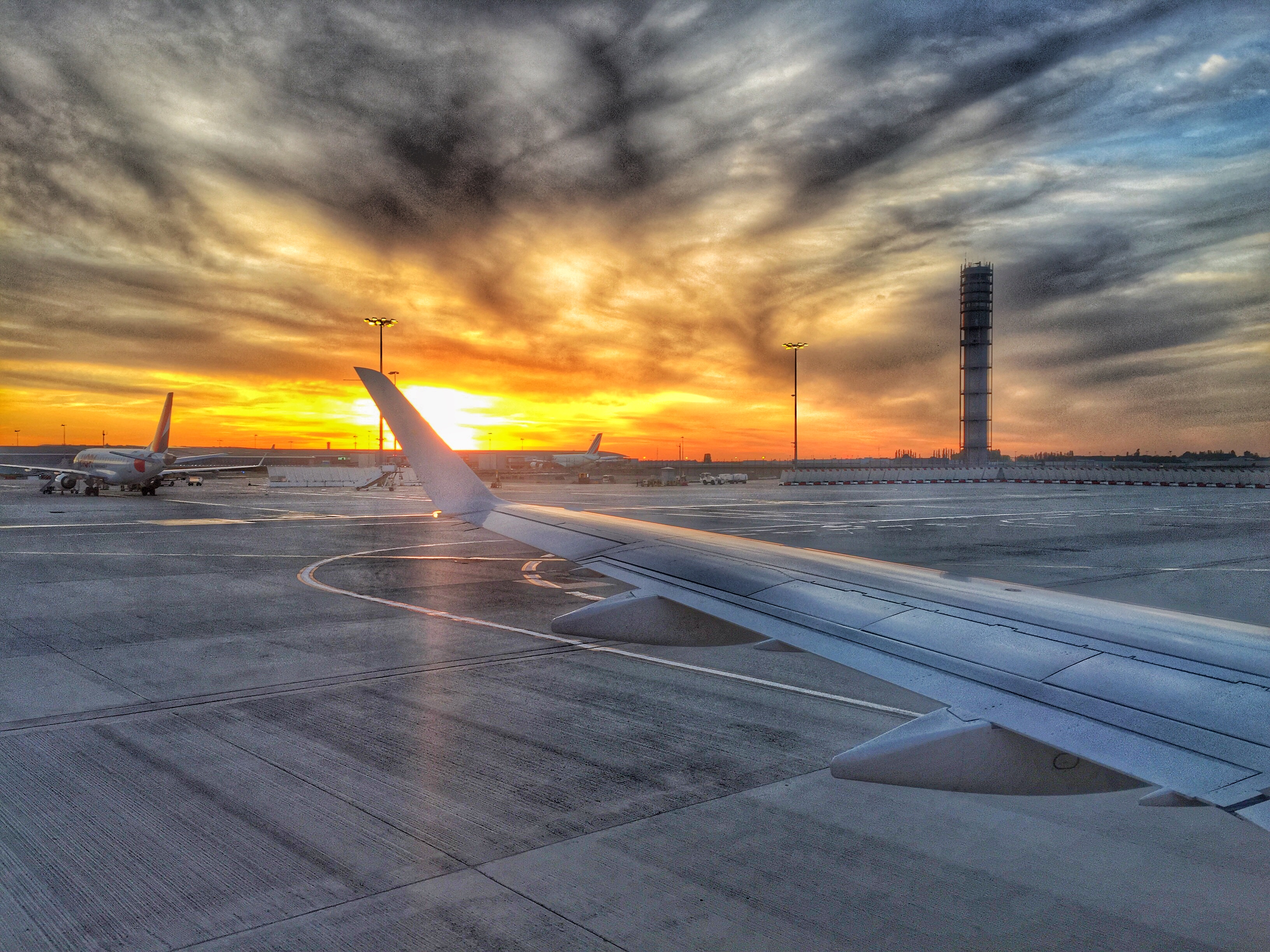 Pushback began soon, we went off-block bang on time. During an announcement, the purser made a bit of a mistake: Instead of an E-Jet, he mistakenly referred to this plane as an EasyJet one. Oops… Anyway, I felt that this flight was off to a great start as the cabin crew and me (no one other than that seemed to get it) were in a great mood.

The Flight
Keeping my eyes glued to the window, I enjoyed watching the sunset as the plane taxied across CDG to our departure runway, RWY09R.

During take off, it was well noticeable that the E-Jet does have some power (especially in relation to it's size) and soon, we were on our way to Frankfurt.
It was dark very soon after takeoff and the crew began distributing snacks and drinks. There was no choice concerning the snack but that didn't present a problem at all. The sandwich that I was given by a very friendly flight attendant was quite good. In between the dry slices of bread, they had a great vegetable hummus of some sort.. I (again) opted for a Coke to go with it. Still, this wasn't a small snack at all and I was very satisfied with it for such a short flight.

Entertainment options were very limited, namely consisting of: Advertisements in the form of an Air France Magazine, the pre-downloaded magazines and the window. But then again, due to the short flight, that wasn't a problem and I enjoyed the views while stretching out a bit thanks to a free seat next to me. Very soon after, they were beginning to dim the cabin lights in preparation for landing at FRA. At some point, the lighting consisted of just the reading lights:

We were cleared on direct approach to RWY 07C due to runway maintenance being performed on 07R which is typically used for landings.
I tried to get some pictures but apart from this still pretty crappy photo, the conditions didn't allow for better ones.

After landing, we headed towards Terminal 2, which is a long way. Again, we were assigned a remote parking position and busses & stairs to shuttle us. Or so I thought.
Turns out acciona (ground handling) didn't want us to disembark so quickly. We landed 15 minutes early but that didn't hold up for long. They brought the wrong stairs. The whole plane, including the captain while he still was on P/A, was cracking up with laughter at the moment of the announcement. Luckily, only a few minutes later, they 'found' the correct ones and we were able to leave the aircraft and head towards the terminal.

FRA didn't present anything special… I cleared the baggage claim quickly and was able to proceed to Terminal 1 through the pax mover system, Skyline (because it's elevated, get it?). Anyway, that's it for this report - feel free to leave a comment!

Thanks to my friend "EDDFSpotting" for supplying the cabin & catering pictures!
See more

I can only recommend both Paris CDG as a departure airport and Air France as an airline. Both presented themselves to me as very friendly and still very efficient. An on-time flight, a friendly crew, a great seat and a free snack - all of these make a great flight for me!

The contributors of Flight-Report published 98 reviews of 4 airlines on the route Paris (CDG) → Frankfurt (FRA).