#11 out of 72 Airlines A minimum of 10 flight-reports within the past two years is required to appear in the rankings. 664 reviews

By Quirrow 2955
Published on 11th June 2016
This series of flight reports chronicles my journey from tropical Indonesia to France where I would go skiing. It is part of an Aeroplan miles redemption in First Class. Like my previous reports, the journey can also be read in my blog for the original format. 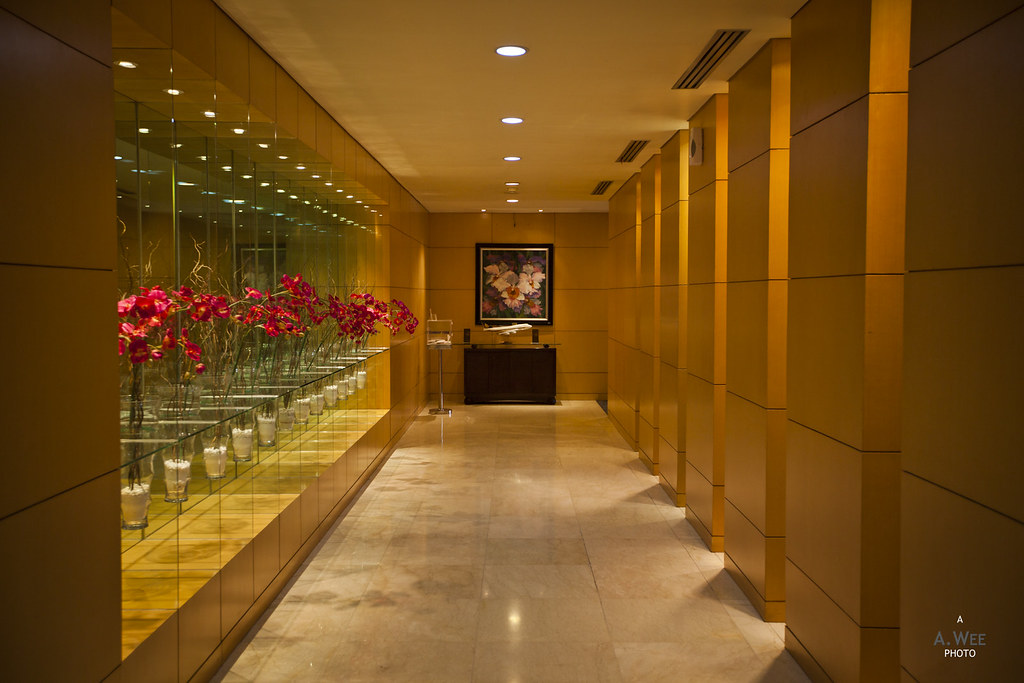 Checking in for Singapore Airlines in Jakarta is a very easy process as the counters are usually not very busy. Moreover travelling in First Class I had an empty counter waiting for me. After getting the boarding pass, I was actually escorted by a staff member through a premium immigration and security counter on the left of the check-in area. This was my second time departing on Singapore Airlines First Class out of Jakarta and the additional escort service might be useful for a foreigner. To me, it is just an added perk. There is only one immigration officer waiting by the door into the lounge but you get into the lounge area straight. For other premium passengers this is their lounge, but Singapore Airlines uses the Esplanade Lounge across from this one, and in my opinion the Esplanade Lounge is certainly the more exclusive one. 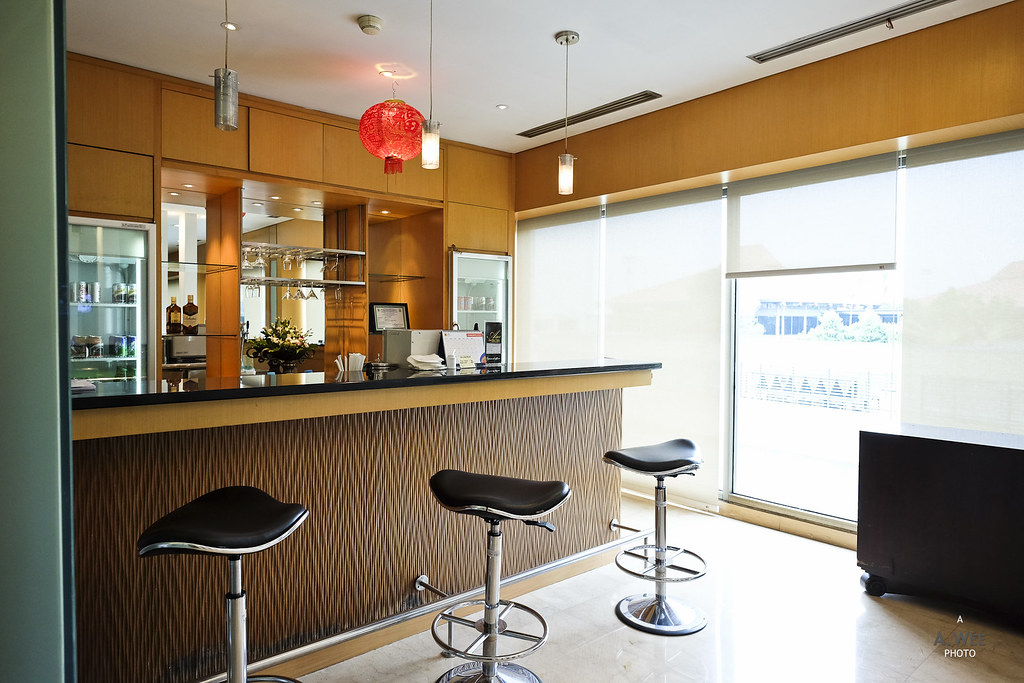 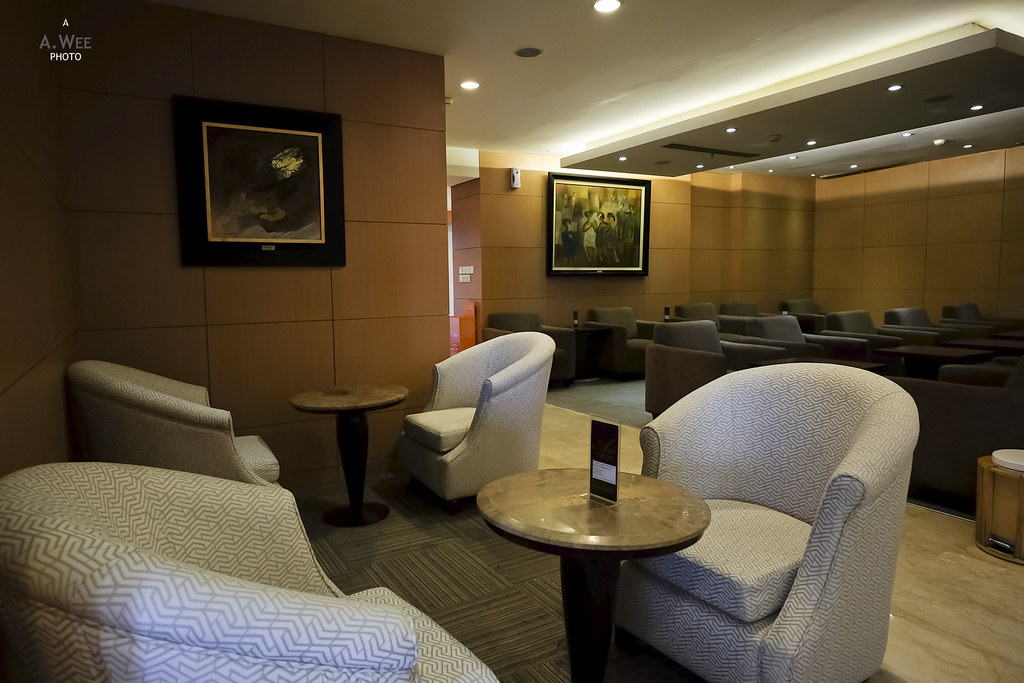 Lounge seats near the entrance

Entrance to the lounge was a bit dark and this section is especially empty because of the lighting. A buffet counter lies beside this area. While the lounge serves hot cooked food like fried rice and/or noodles, they were lacking in quality. I would rather just get meals before or at the flight instead. It is honestly quite bad. I had quite a heavy breakfast before arriving at the airport and Singapore Airlines does serve decent meals on First Class so I was not about to make myself full from subpar lounge food. 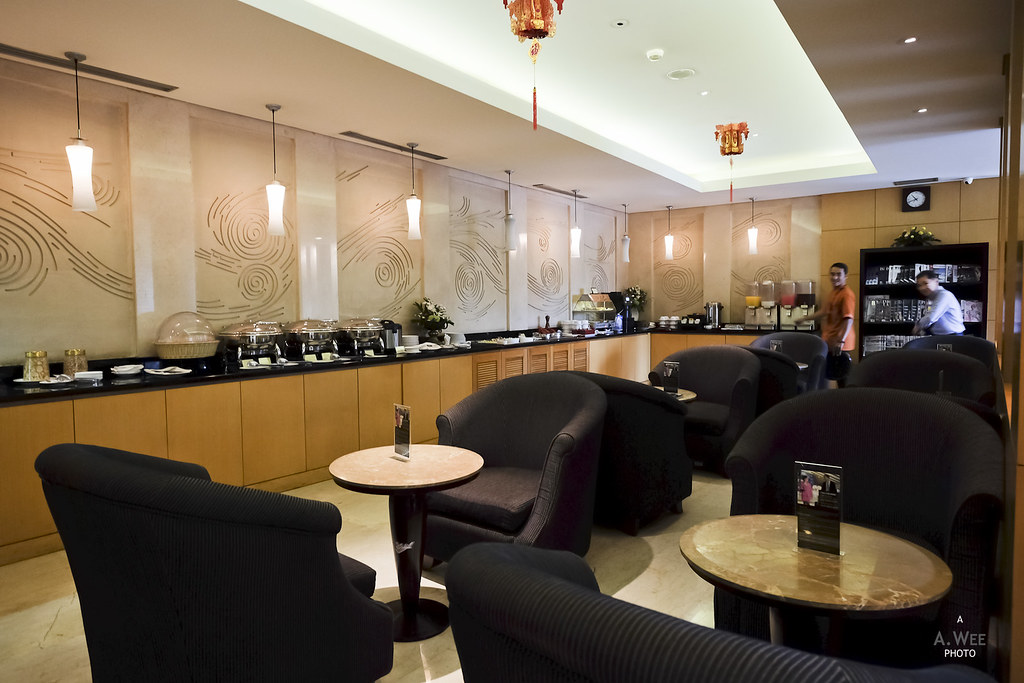 A partition lies between the buffet counter and the rest of the lounge seats that has tarmac views. It was a very decent space all around and there was free wifi that guests could use by asking for the password. In the end I just sat down to lounge since I did not really need much food or beverage. There was also no staff that asked me whether I wanted any drinks, a slight difference compared to my previous visit to this lounge. 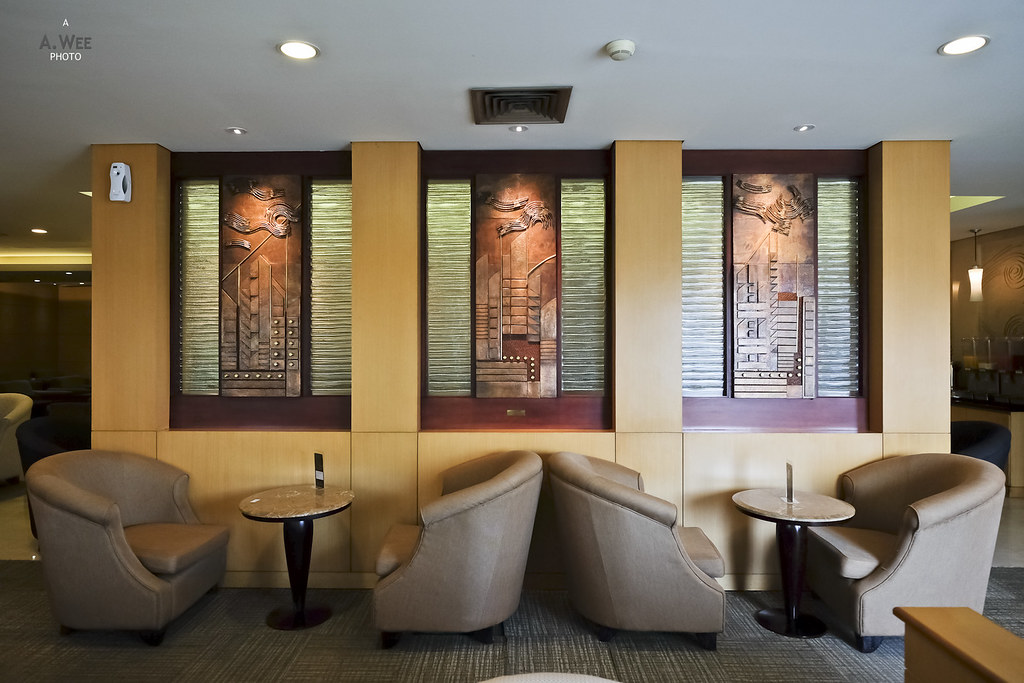 Seating space and partition in the First Class lounge

In the lounge, there is also a row of workstation located between the Business and First Class sections. It was empty with no use using the PC nor the bar. 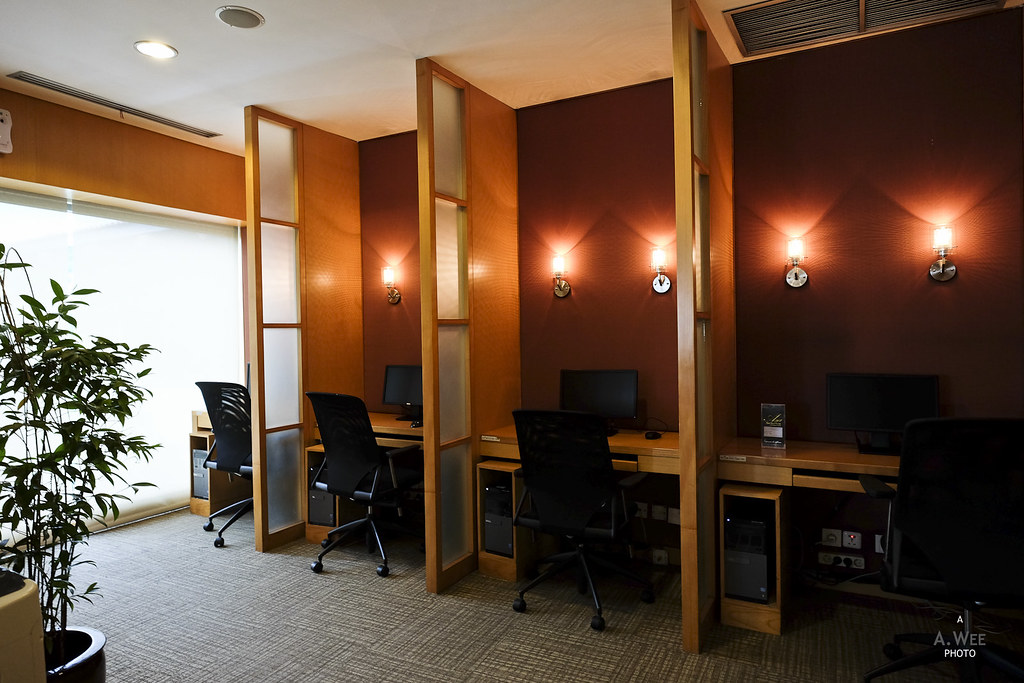 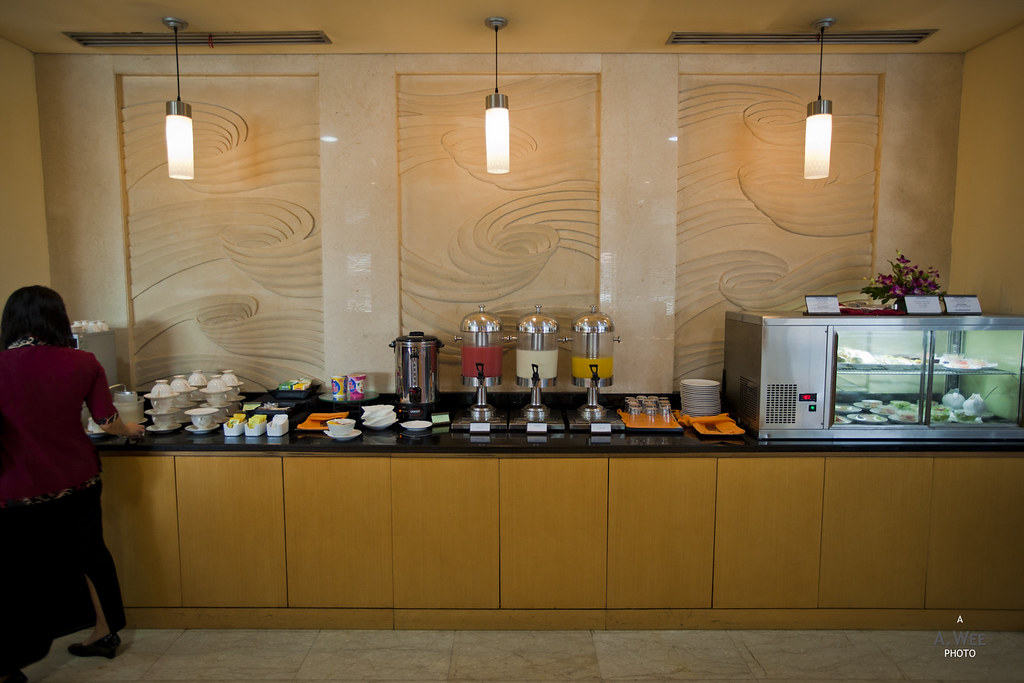 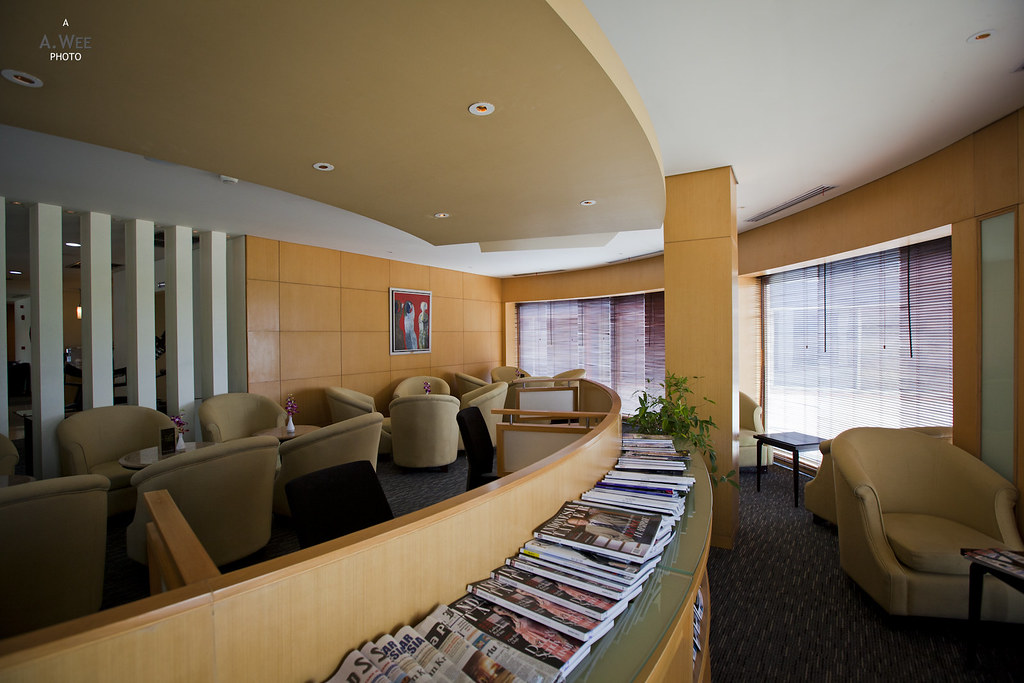 Magazine rack in the lounge

Instead of writing more about this average lounge, I will just post the photos taken from previous visits. In addition, during this lounge visit, I actually misplaced one of my keys. I was actually able to exit out to the check-in area to check if I dropped it somewhere. That meant I actually went out of the immigration and back into the lounge just by saying a word to the lone immigration officer waiting at the premium check-in area. Aside from this minor incident, the lounge was just adequate for waiting the next flight and I proceeded to go through another round of security check before boarding (the first round of security check is before the check-in counters). 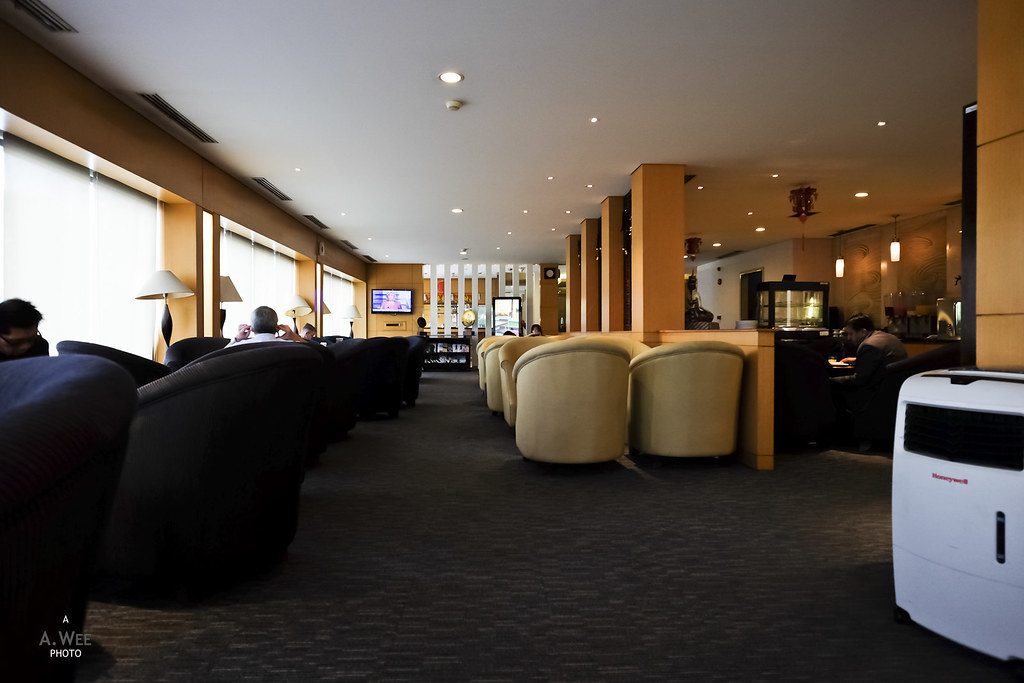 Exiting the lounge, there was no premium security check line as all passengers are required to go through another security check before the boarding gates. Usually the queue for the check was short and I have never had to wait more than a couple of minutes. However for some reason, the queue that day stretched at least a 100 metres deep. Travelling in First Class, waiting for security seems to be such a hassle and it took me about 15 minutes to clear it. 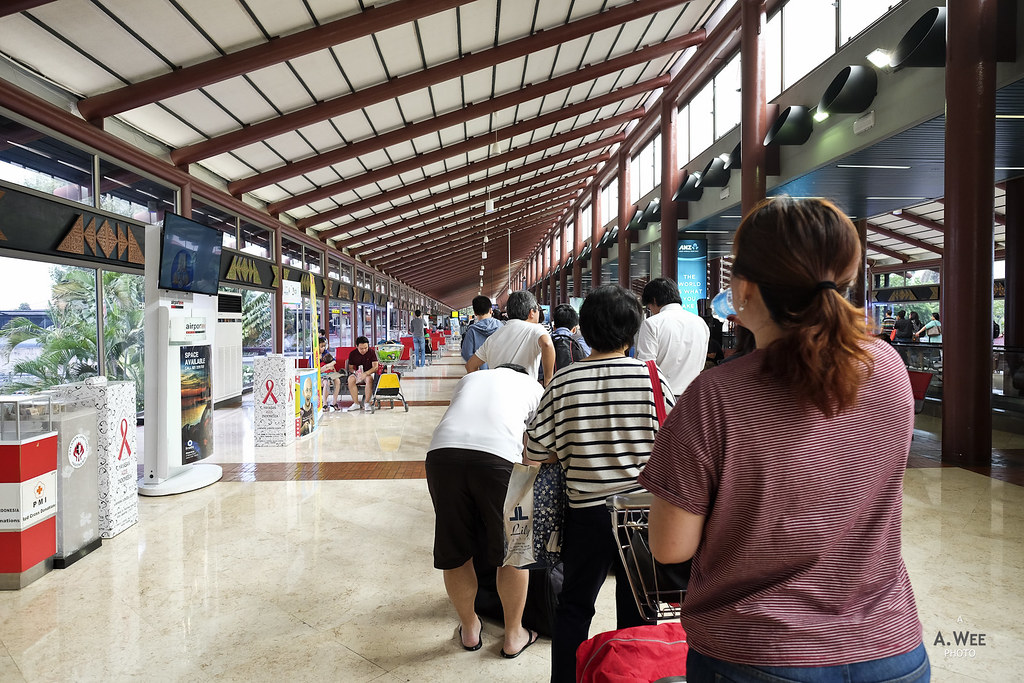 Fortunately, boarding has yet to start when I reached the gate, and I snapped a couple of photos of the 'albino' 777-300 jet that has the Star Alliance livery with the registration of 9V-SYL. I had actually spotted the arrival of the plane while walking to the lounge. It is just a shame that due to the parking position of the plane, I was not able to capture the all-white livery. 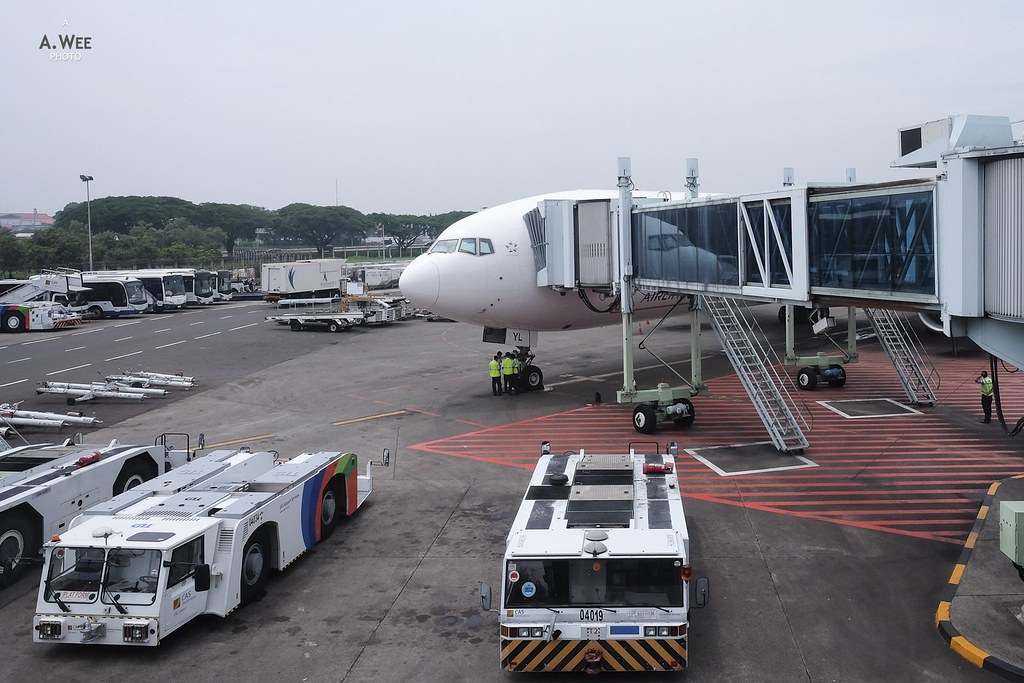 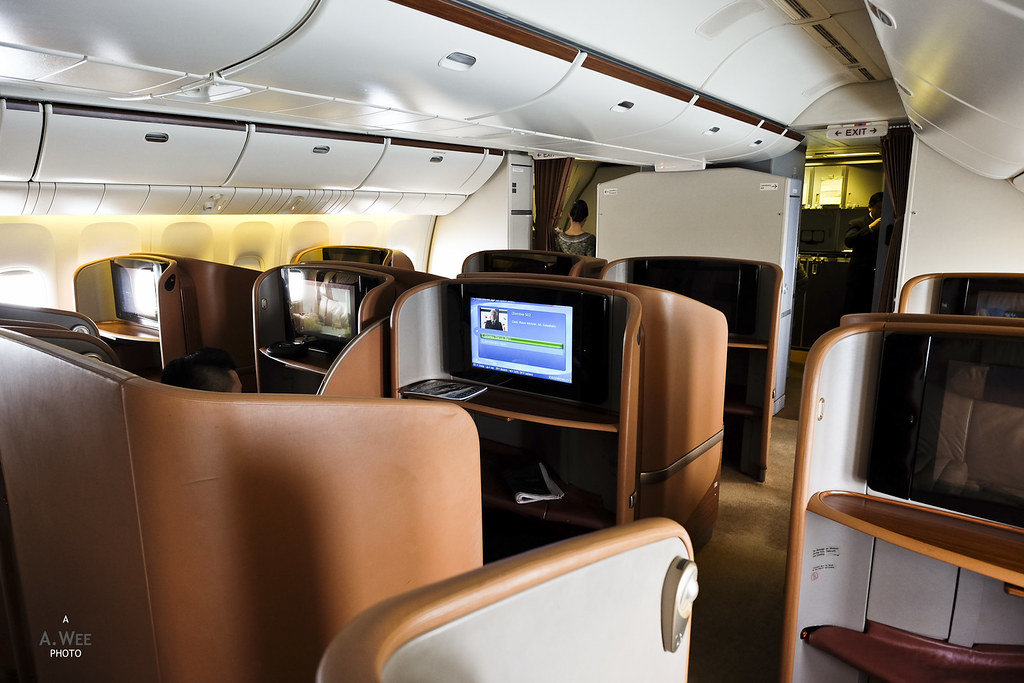 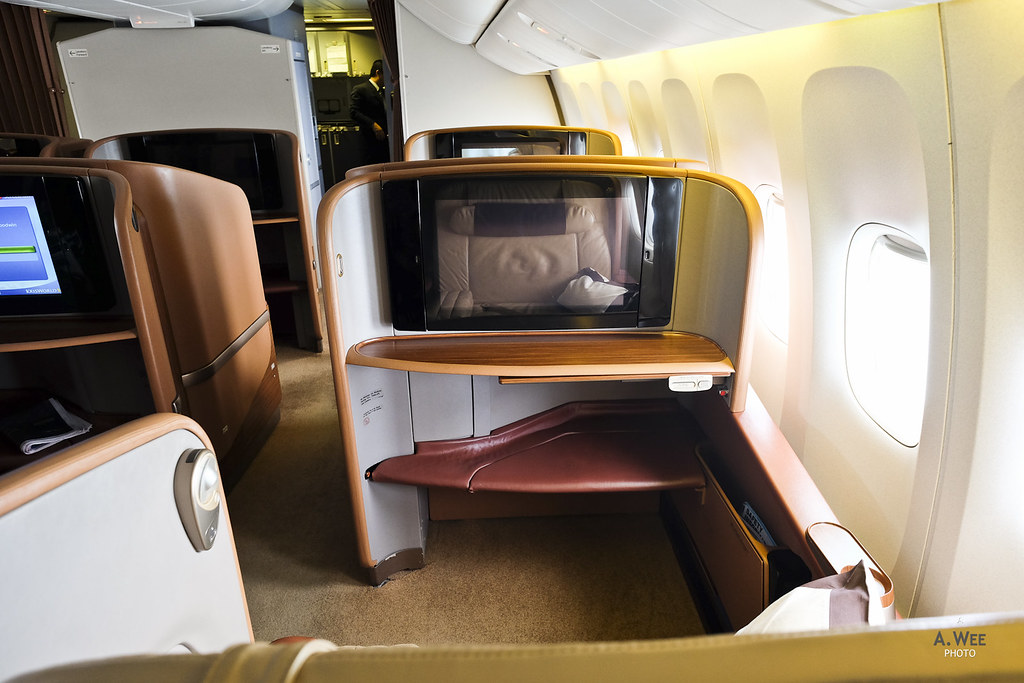 Since I was delayed by the security check, boarding has already commenced when I arrived. I proceeded straight to board and the friendly crew welcome marked a great start to the flight. For starters the steward serving the flight offered me the use of 1D to store my hand carry, and thus I had no need to use the overhead compartments. 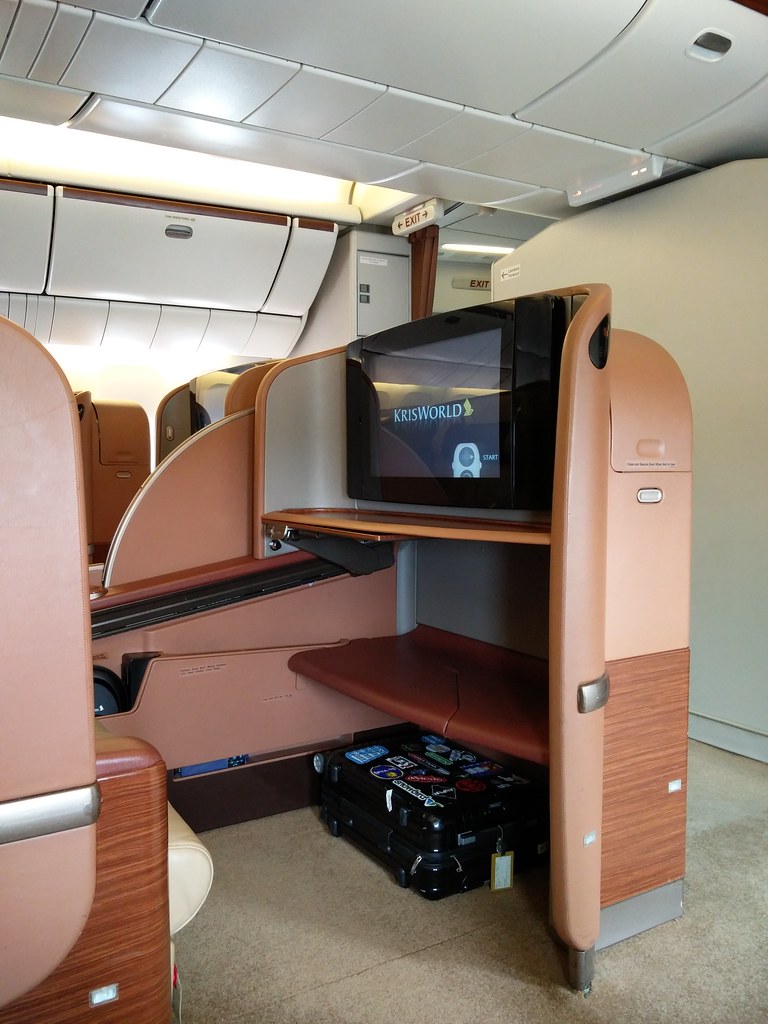 Seat 1D with my luggage stored underneath

As I settled on my seat, I was served with a welcome drink and fresh towels, and I picked orange juice for the pre-departure drink. I should also note that there was a pillow on the seat. 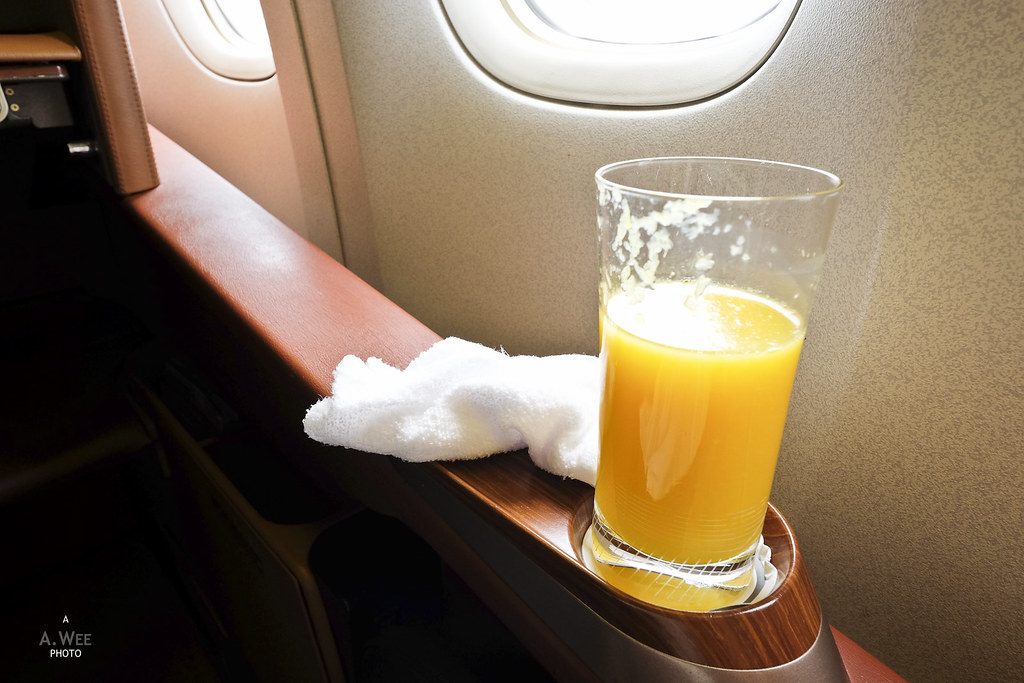 At this point in time, the captain for the flight made an announcement that boarding was delayed due to 4 missing passengers and the luggage had to be offloaded. That gives me more time to enjoy the warm and rich tones of Singapore Airlines leather seats. 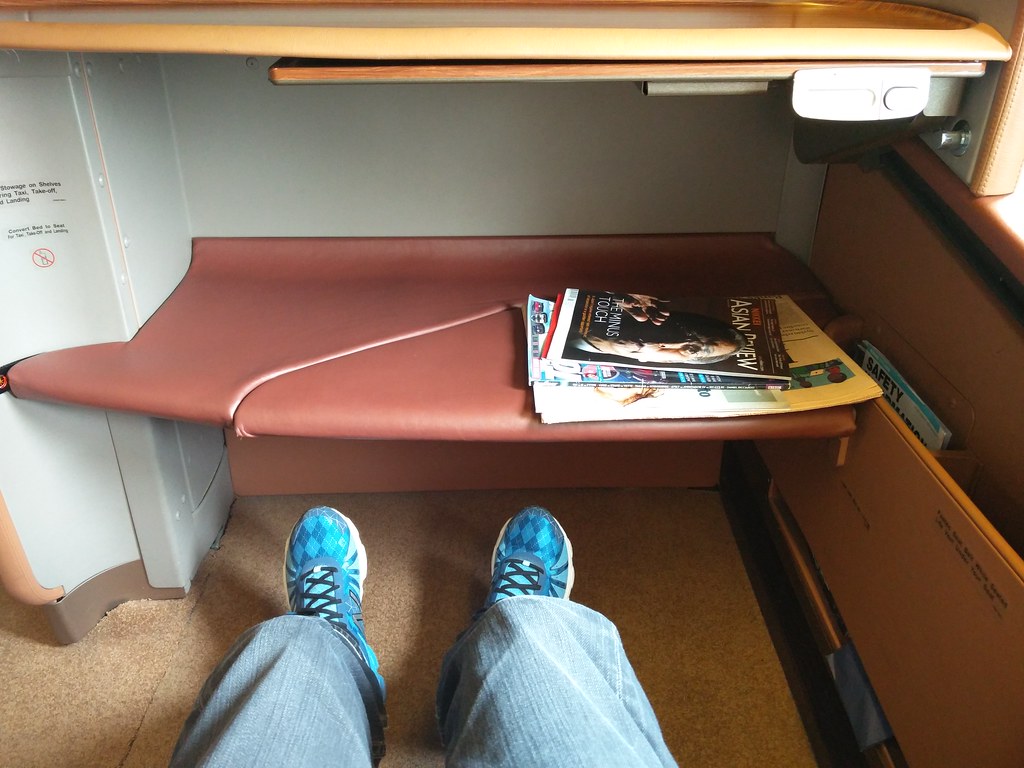 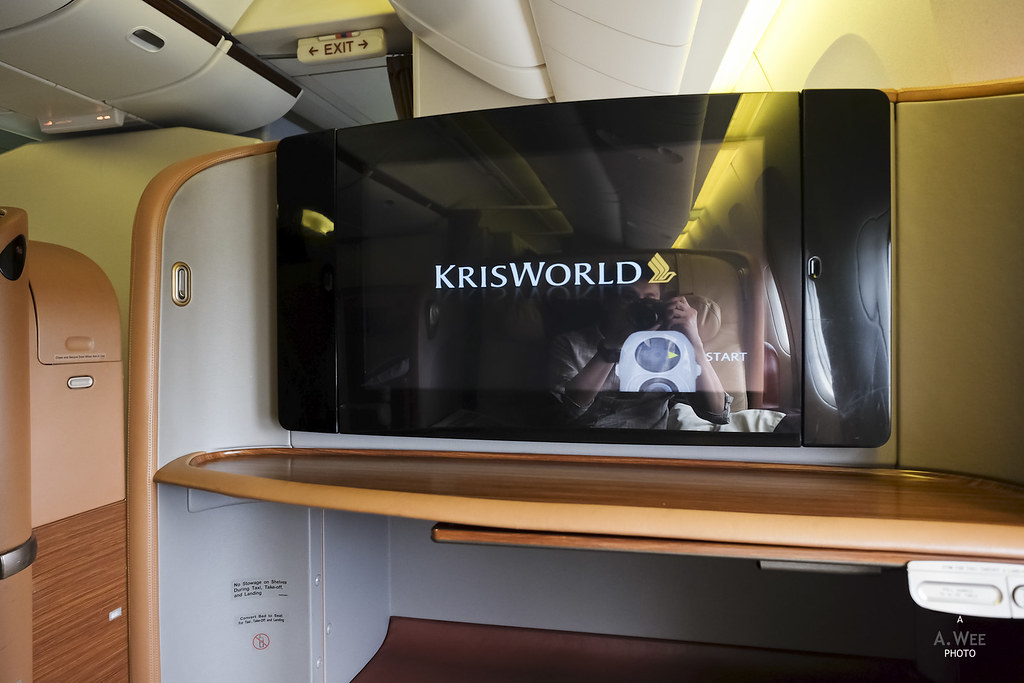 While waiting, the crew offered newspapers and magazines. There was not a copy of Top Gear in the tray so I asked for one of them since I know SQ stocks them. Other upgrades in amenities offered includes the Bose noise-cancelling headphones, which is an amenity that should be in any airlines' premium cabins. 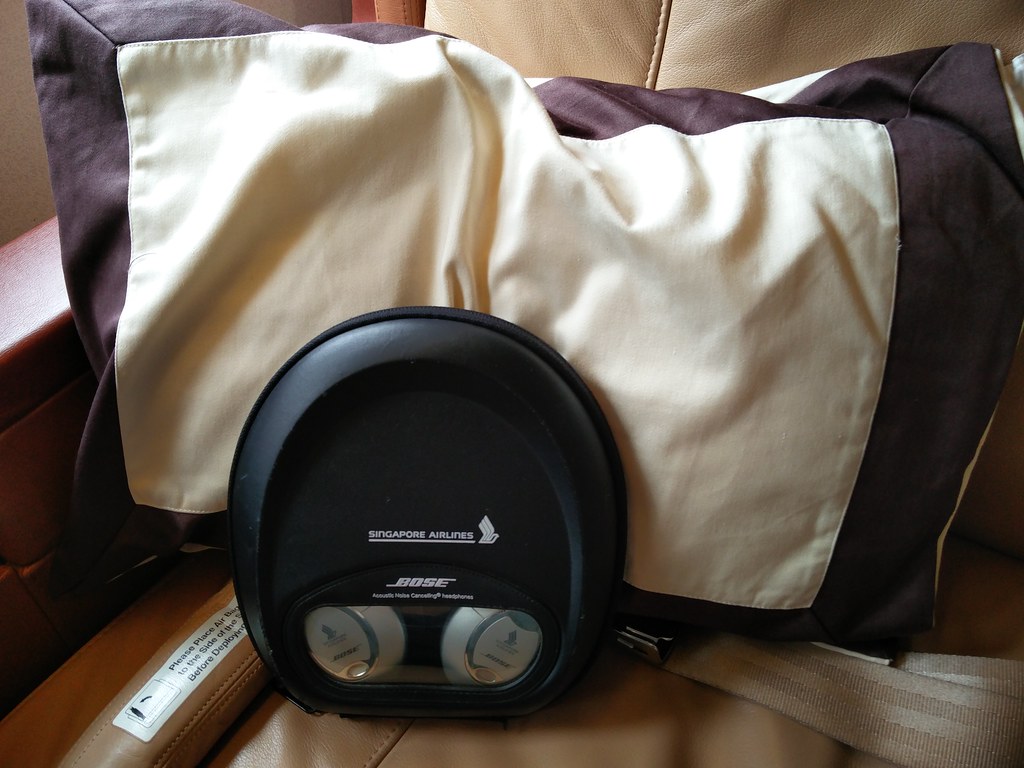 Lunch menus were also distributed while we were waiting. With 3 choices of entree, the lunch menu was good! Meal orders were also taken right before take-off and I had the tournedos of beef as my choice of meal. 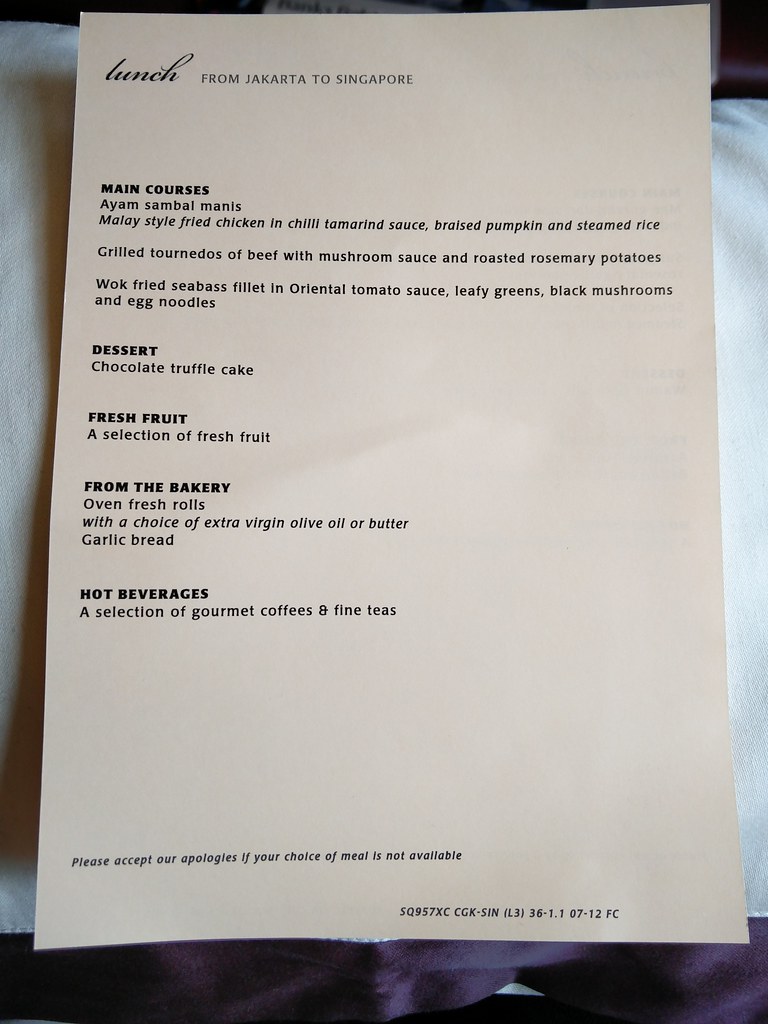 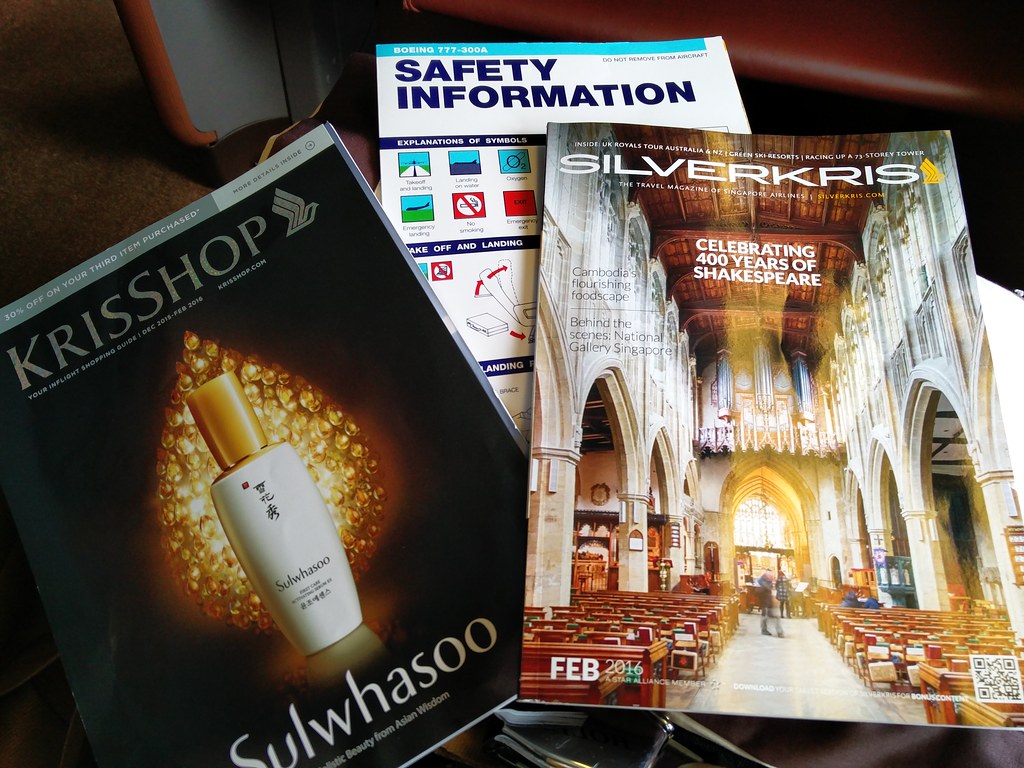 Once the luggage has been offloaded, the plane went on its way. For some reason, the wait to take-off was not that long that morning and we were airborne quickly after the slight delay. Unlike past flights, there was no amenities like eyeshades or socks distributed but the crew immediately went on to take orders for drinks. Being a huge fan of their coffee, I asked for a cup of Colombian coffee. Indeed, Singapore Airlines asks passengers what blend of coffee they would like. What was impressive was that the coffee service came with a whole set of condiments served in a stainless steel canister and jar. 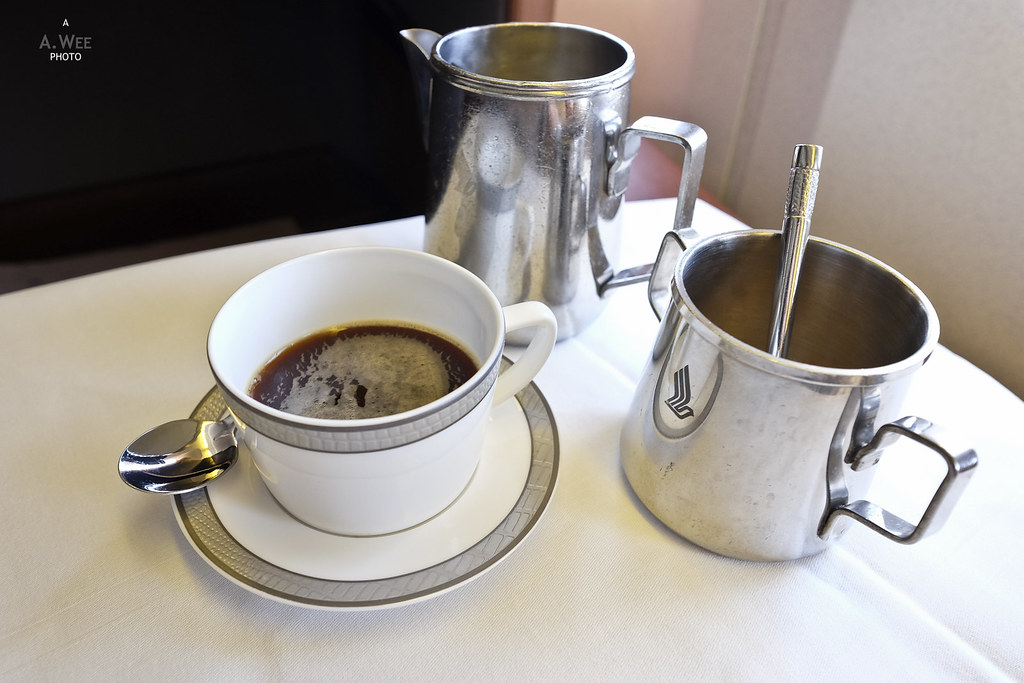 A small ramekin of warm mixed nuts consisting of macadamias and pecans was served along with hot towels before the main meal. All these in a short flight less than 2 hours. 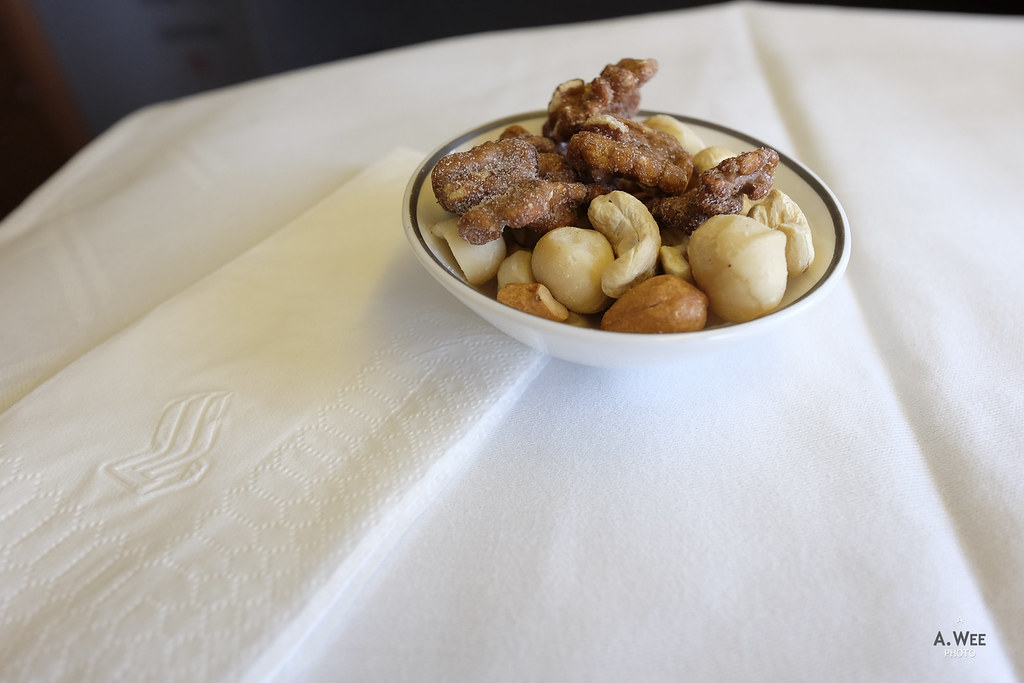 Warm nuts on a ramekin

Shortly after, my choice of the tournedos of beef was presented along with the chocolate truffle cake. Another steward came over with the bread basket where I selected some of my favourite choices including the garlic bread. 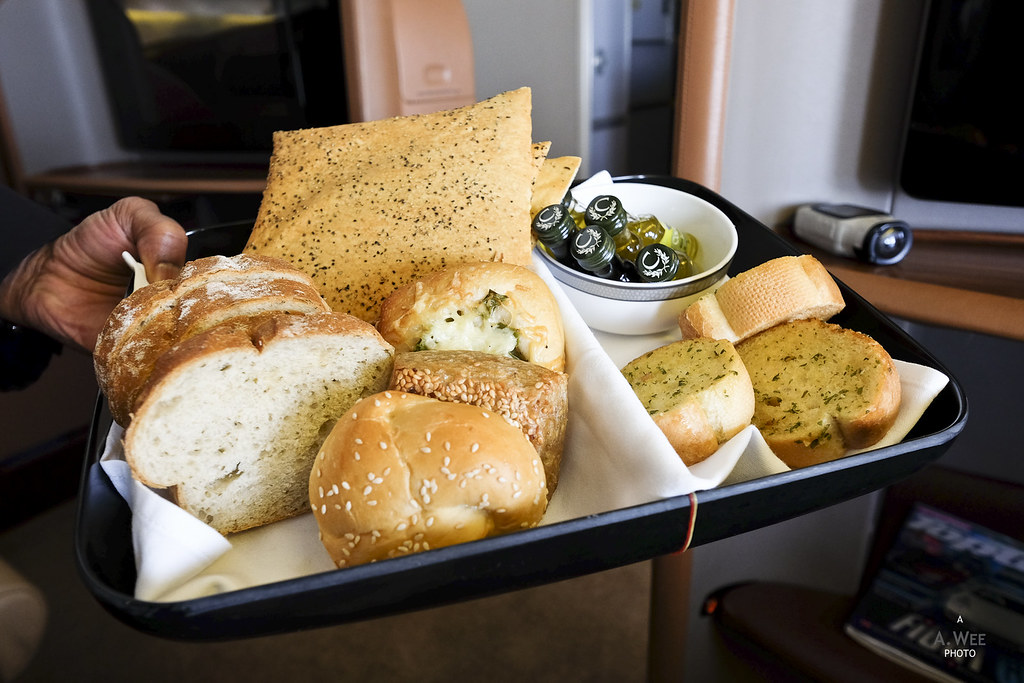 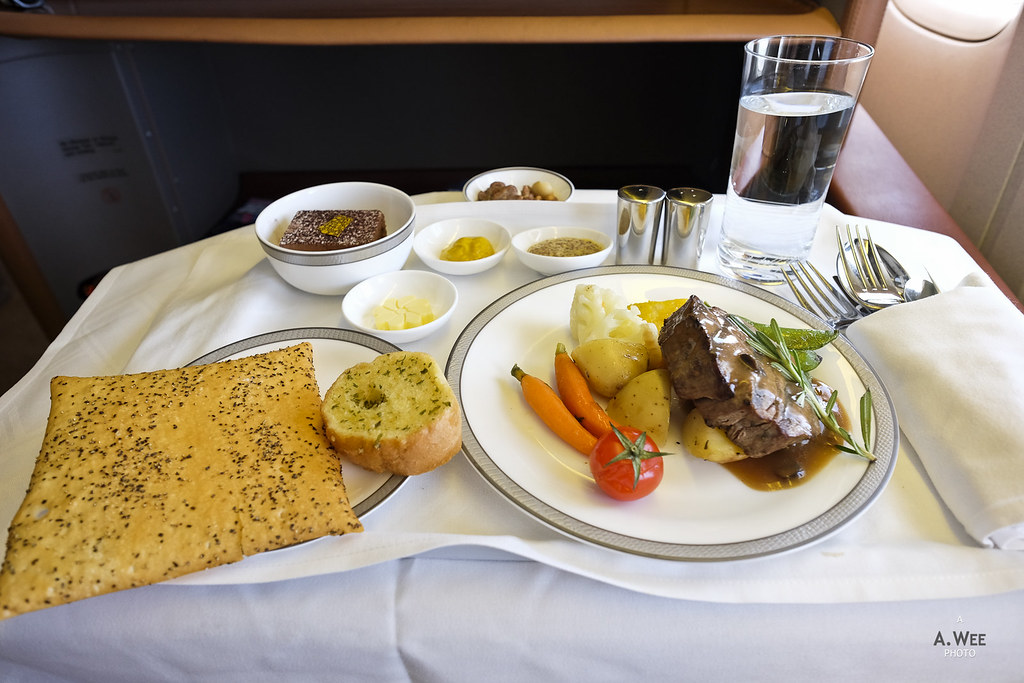 Beef main course was good, and easily one of the best beef I ever had onboard a plane. It was still tender, juicy and cooked like in a bistro. Even the vegetables served alongside looked fresh. While there was no appetizers, the main course was so good, I need nothing else for this short flight. 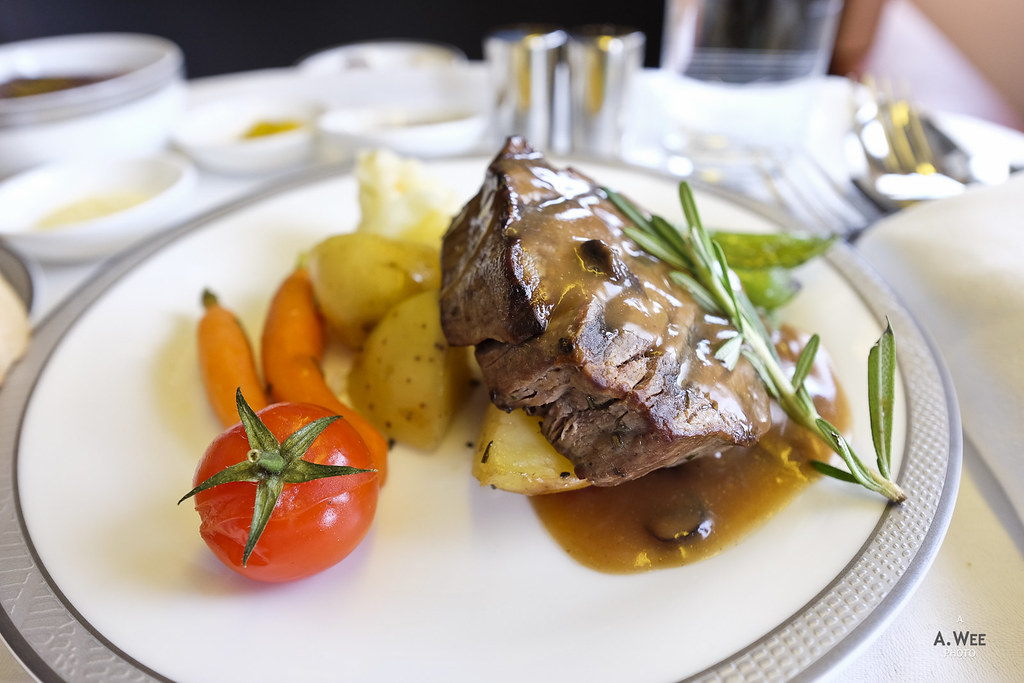 The small dessert course of chocolate cake was average and easily forgettable. Though the crew also did come around with fresh fruits from the tray which guests could pick from after the meal service. There was not a large selection though and I had some grapes and lychee but I appreciated the gesture nonetheless for such a short flight! There was also another round of towel service after the table was cleared. 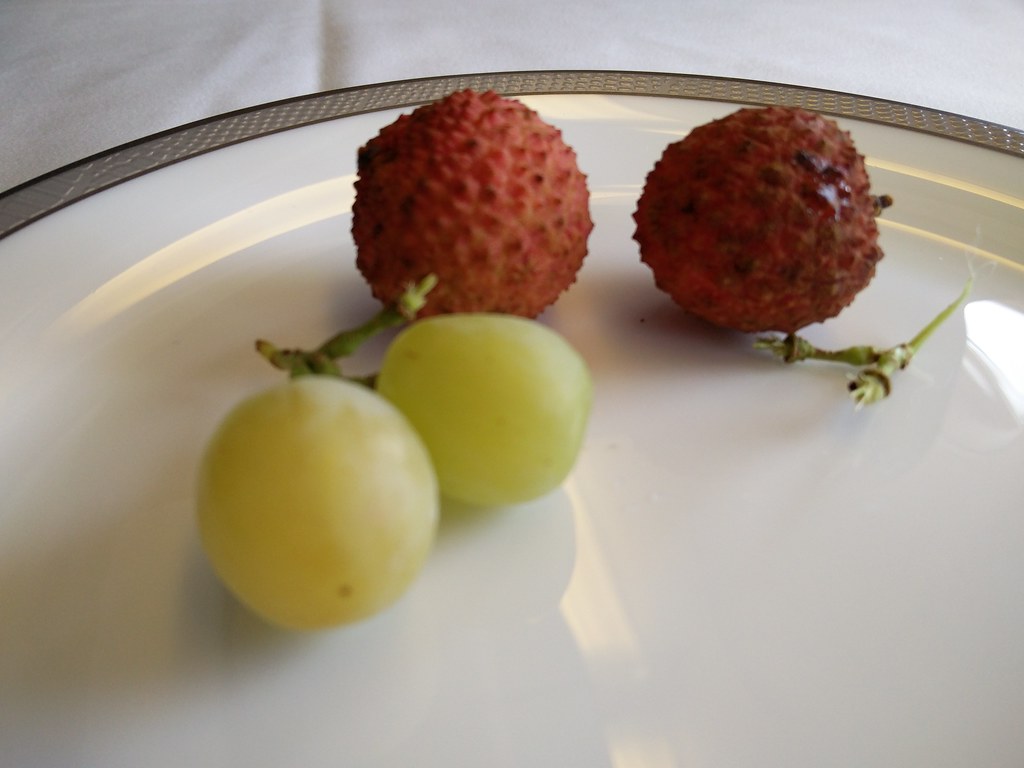 Lychee and grapes from the fruit selection

I walked around to stretch my leg after the hearty meal and noticed the cabin was about half full with 1A, 2A and the second row of the center section occupied. That meant I had probably the nicest seat with no one behind or beside me. These seats actually fold down to be a lie-flat bed which was not useful for this short flight as they needed an attendant to switch it over. But it was really nice for Singapore Airlines to retrofit the older 777s with these seats for short regional flights. 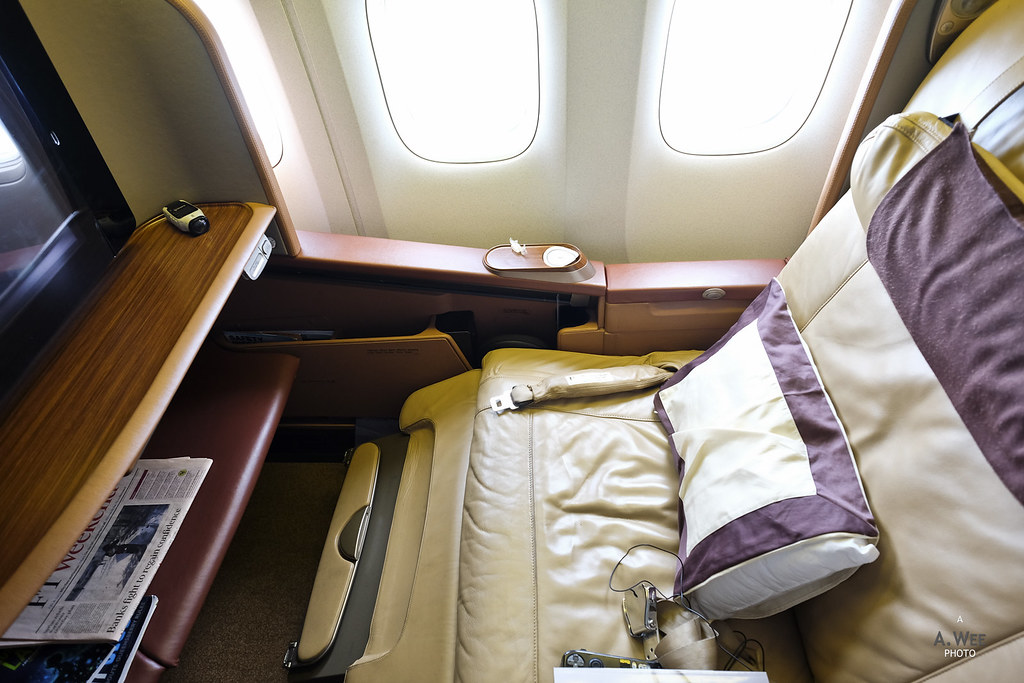 Seat 1K in lounge mode, with mint candy on the arm-rest

The crew then came around the cabin to offer mints for passengers while thanking them for their business. Sometimes it is just the thought that counts in providing that memorable flying experience. Not too long after that, the plane made a steady descent into Changi Airport before we disembarked into Terminal 3, also the nicest terminal in the airport. 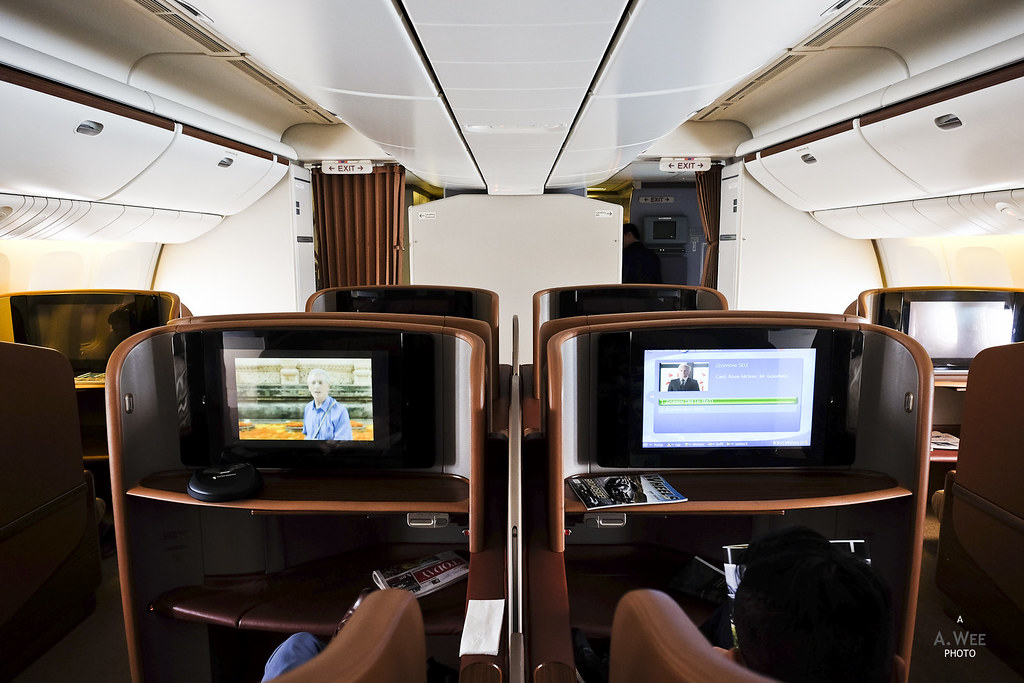 With this flight, the crew was very eager to please and very professional. Such a crew always marks the highlight of flying with Singapore Airlines and distinguishes it even from other premium airlines like Cathay Pacific. It seems that they do things in a very co-ordinated manner such that even a short flight less than 2 hours could have so much details to create a seamless flying experience!