#50 out of 113 Airlines A minimum of 10 flight-reports within the past two years is required to appear in the rankings. 482 reviews

By Menzenski 571
Published on 14th August 2016
Background:
After a quick trip to the DC area, it was time to head home. This routing was a much more tame DCA-PHL-ITH routing versus the double connection two days prior. This would be an interesting travel day. One mainline flight and one Dash-8 flight, but the Dash-8 flight was scheduled to be twice as long in the air.

Story:
I stayed at the Holiday Inn Reagan Airport/Crystal City the night before, which I can recommend. The airport shuttle runs every 20 minutes starting at 4:40am, so with a 7:30 scheduled departure I settled on the 5:20am shuttle so I could get some breakfast at the airport. In the elevator on the way down to the lobby at about 5:10am, I was surprised when the elevator stopped and another gentleman boarded the elevator with a large suitcase. "Oh, I didn't expect any one else this early" he commented. He was in a much bigger hurry than I was, as he said his flight was at 6:10. Instead of waiting the five minutes for the shuttle, he called a cab and was off.

While waiting for the shuttle, I checked my flight status on a TV screen in the lobby of the hotel, which I though was an excellent addition for an "airport" hotel. I finished my coffee and boarded the shuttle with three others.

The driver dropped me at the Terminal C drop off at Reagan airport, the main concourse for non-Shuttle American flights. One thing I've noticed about American's operation at Reagan is that there isn't really a centralized check-in area. There are kiosks all over the terminal, on each walkway to the parking garage and metro station, and even right before the security checkpoints. I bypassed several large groups of people with baggage and found an empty kiosk to print my two boarding passes. I then went downstairs and proceeded through the Terminal C checkpoint very quickly at about 6:00am, plenty of time to get some food.

Well when I say food, I mean that I always to forget that Dunkin Donuts locations in airports seem to never have actual sandwhiches, just coffee, donuts and bagels. So I settled for a coffee and a bagel with cream cheese and told myself I'd grab something more substantial in Philadelphia.

I do apologize for the lack of pictures up to this point. Between watching the opening ceremony of the Olympics until about 1:00am and the 4:30am wake-up call, I guess I forgot to get the camera going. Oh well. 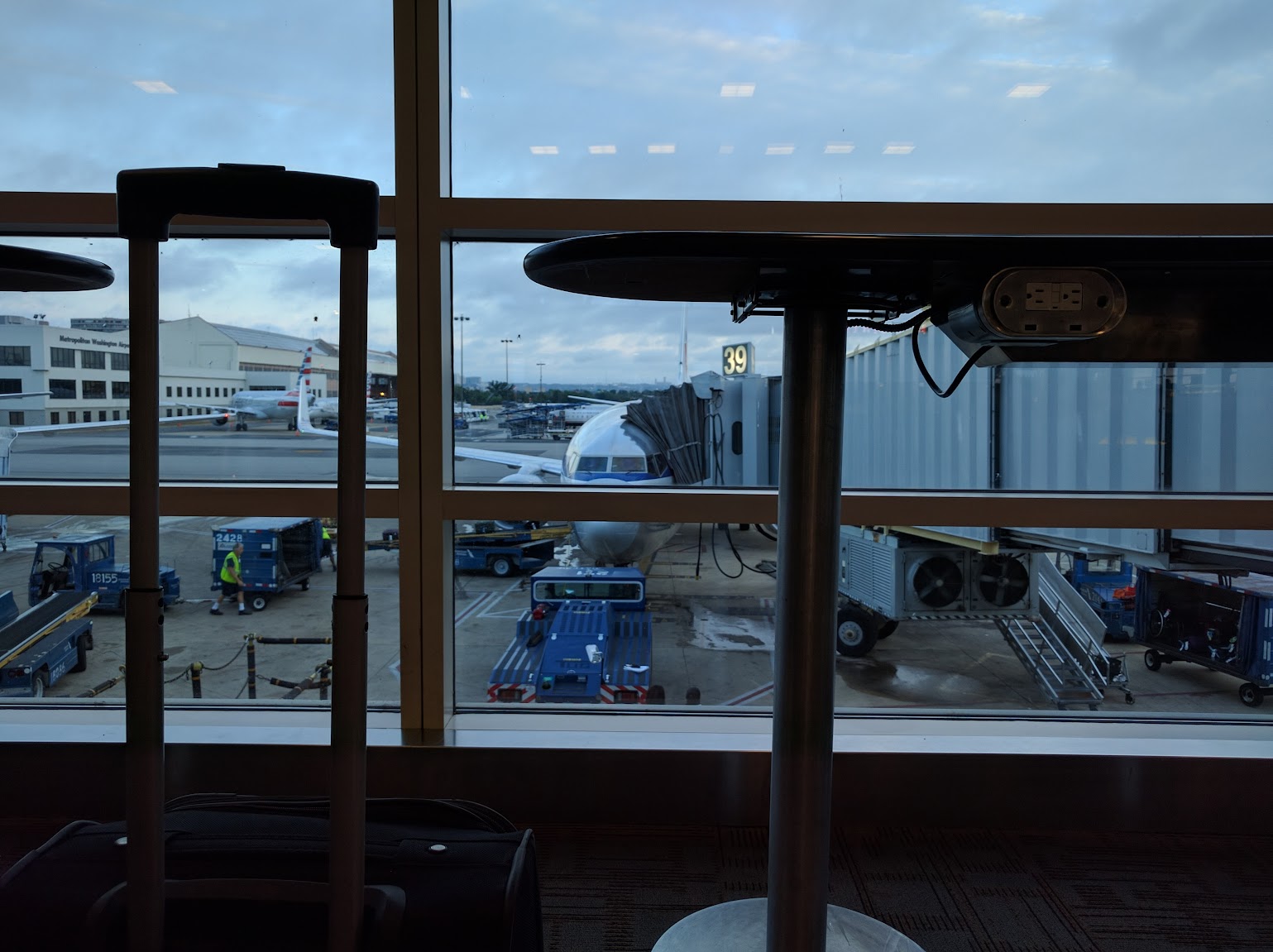 Some US Airways paint out on the 35X stands. 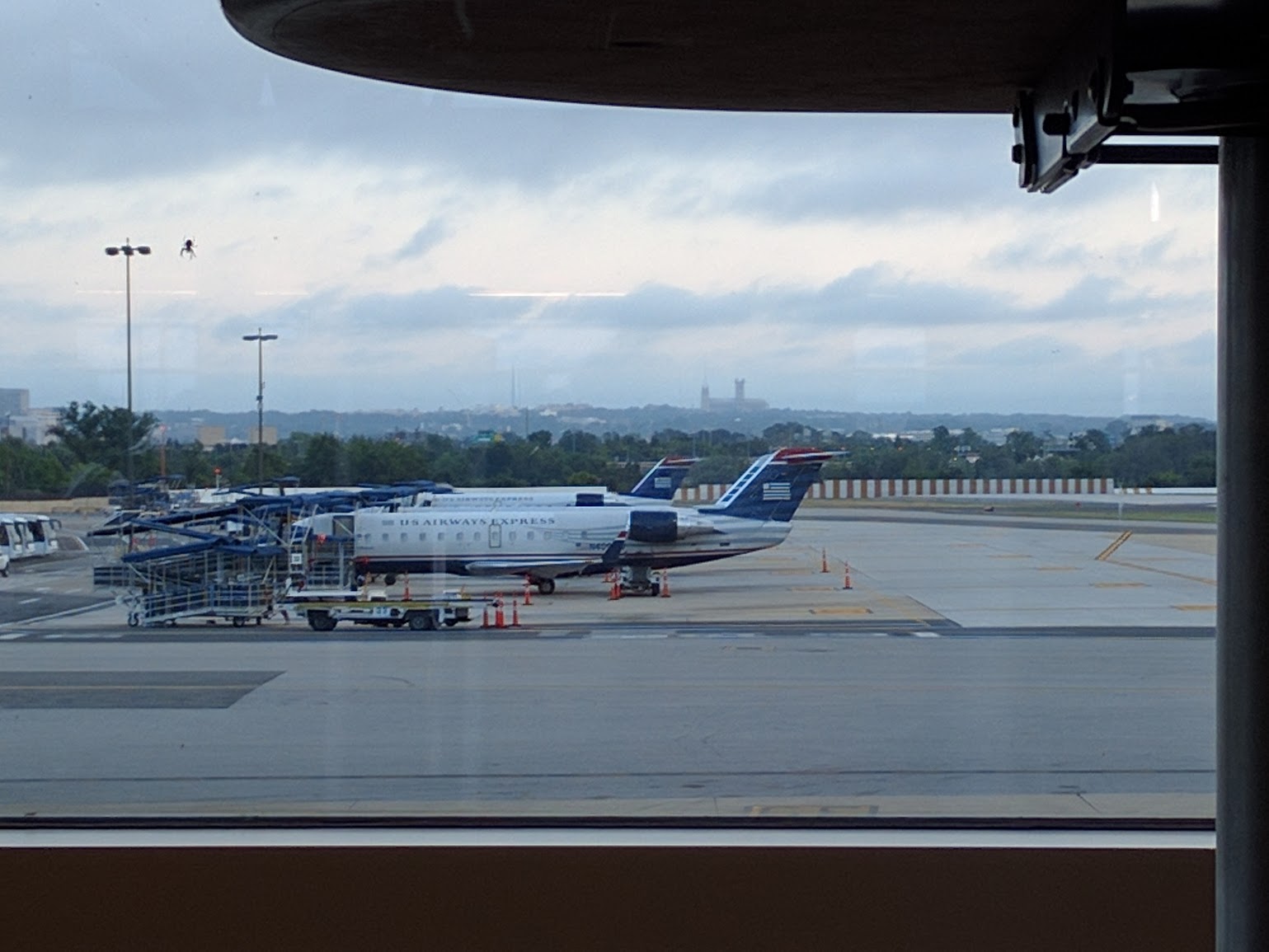 An A319 and E190 waking up after being parked for the night. 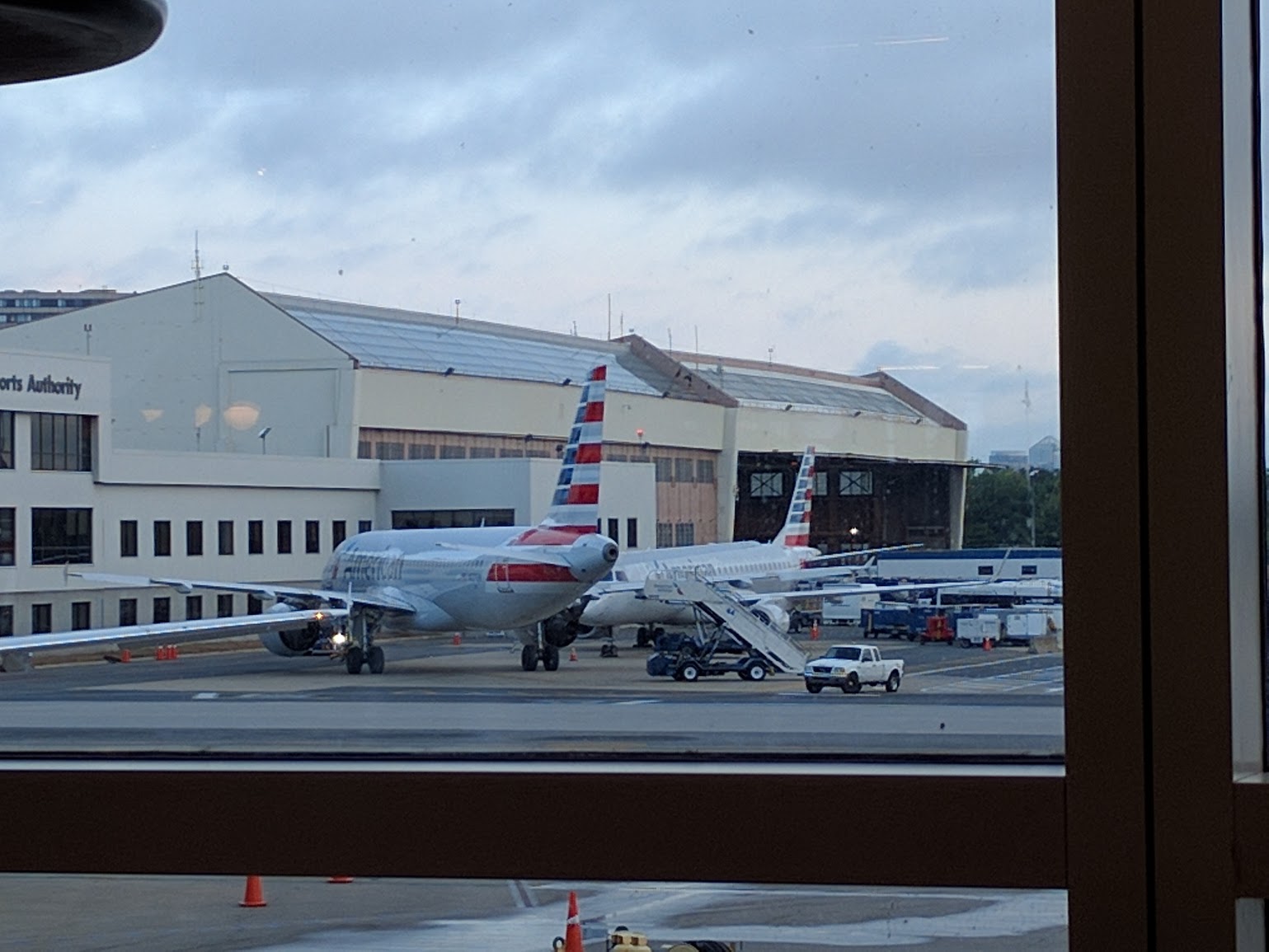 Just a few minutes past 7:00am, boarding began for the short flight to Philadelphia. Boarding was orderly and quickly completed by about 7:25am. A quick peek at a neighboring A319. 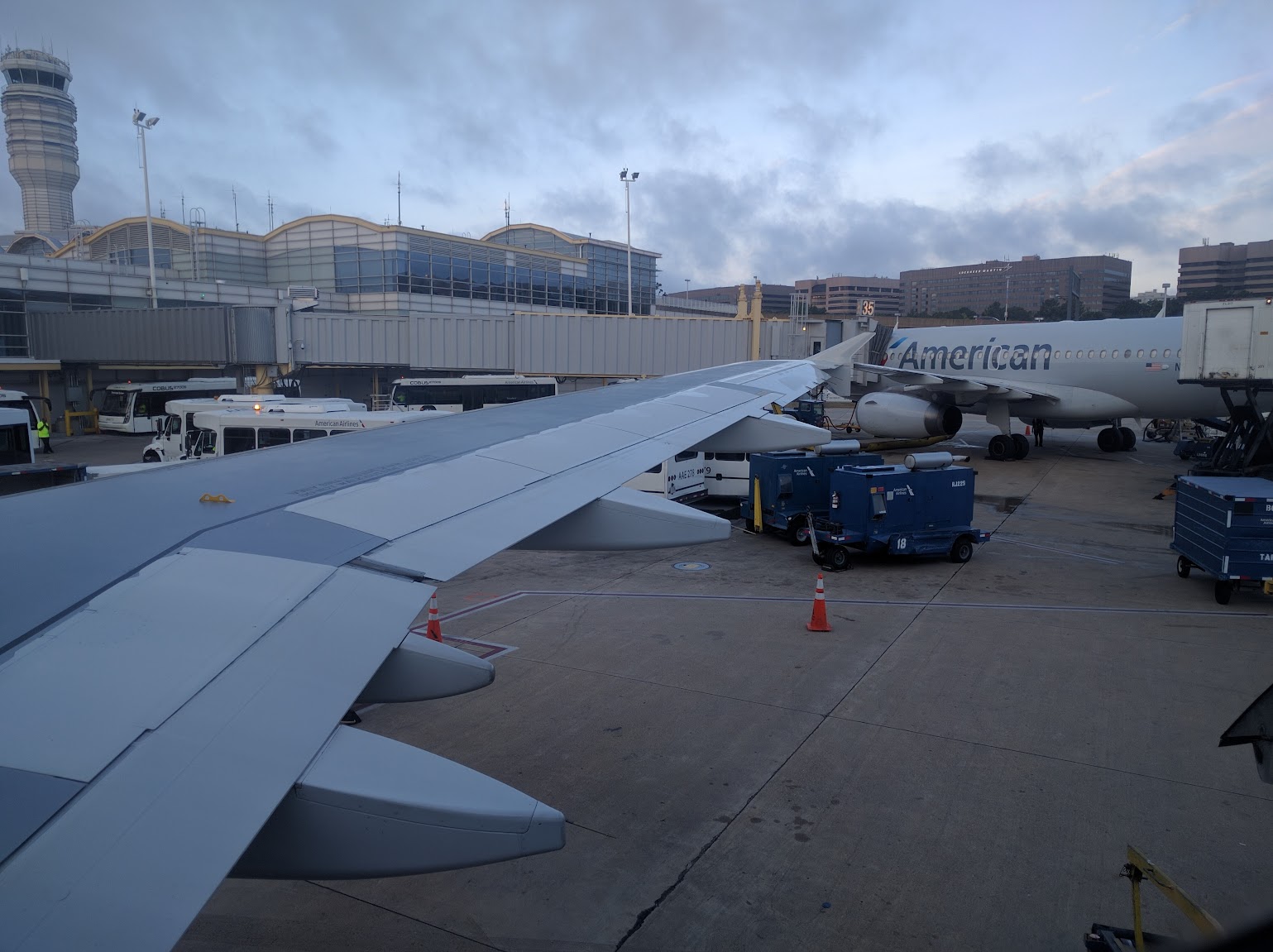 We pushed back just before our scheduled 7:30 departure. The captain welcomed us aboard and announced that our flying time would be 20 minutes takeoff to touchdown at a cruising altitude of 9,000 feet. That would be much shorter than my previous shortest flight, a quick DFW-AUS flight at 31 minutes. We then began our taxi out to runway 19.

However, as we approached the end of runway 19, we taxied into what I like to call the penalty box, an extended area of the taxiway where departing flights wait for a slot or for weather en route to pass. At 7:40am, the captain came on the PA system and informed us that due to a low cloud layer in Philadelphia they were down to single-runway ops. The pilots were working with dispatch to get us into Philadelphia as quick as possible, and he should have more information at the top of the hour. I was pretty relaxed. After all, this flight was planned to be 20 minutes in the air, and it's blocked gate-to-gate at 1 hour 16 minutes. I should have no problems making my connection to Ithaca.

Some spotting while we wait for more information. 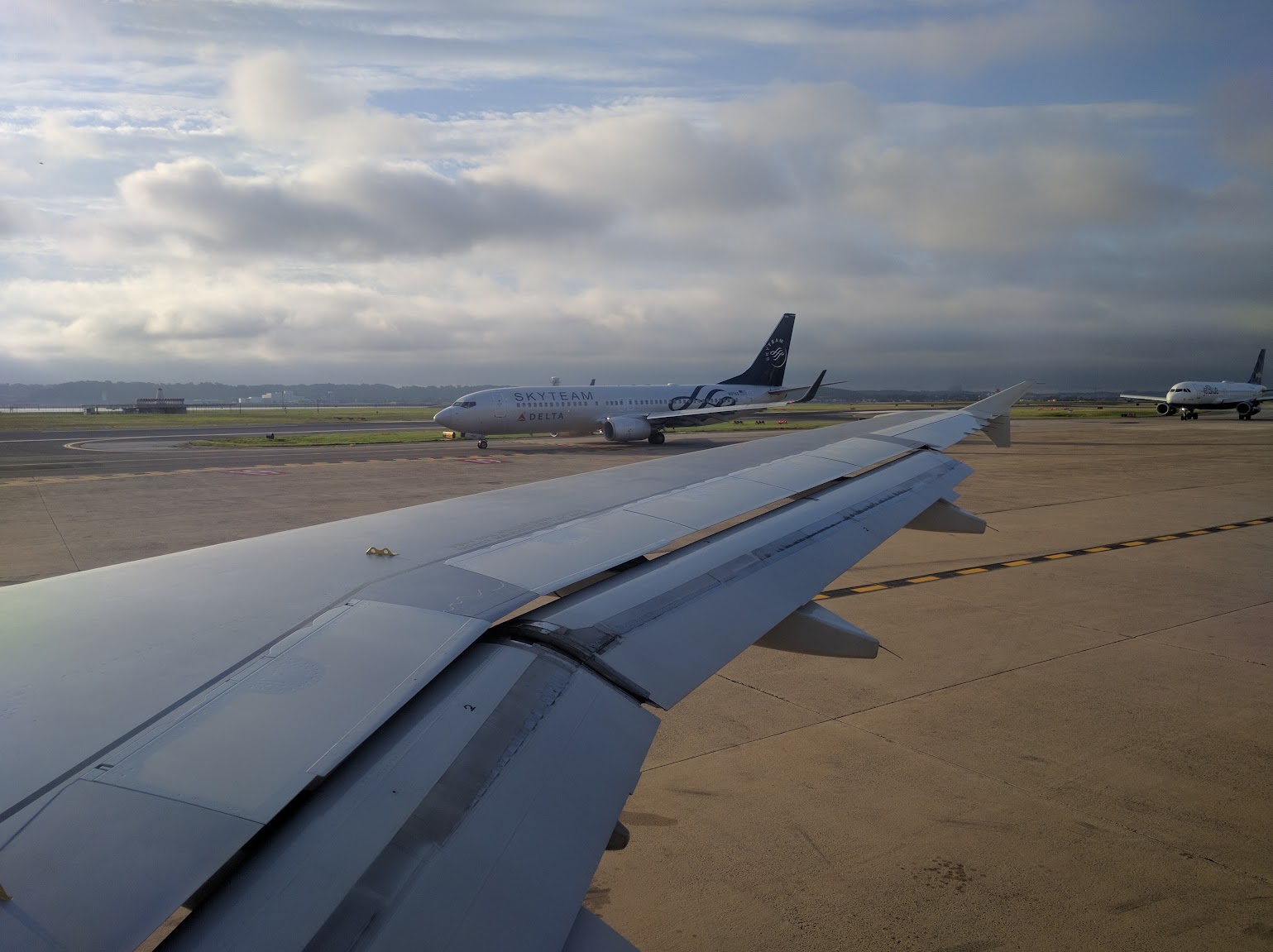 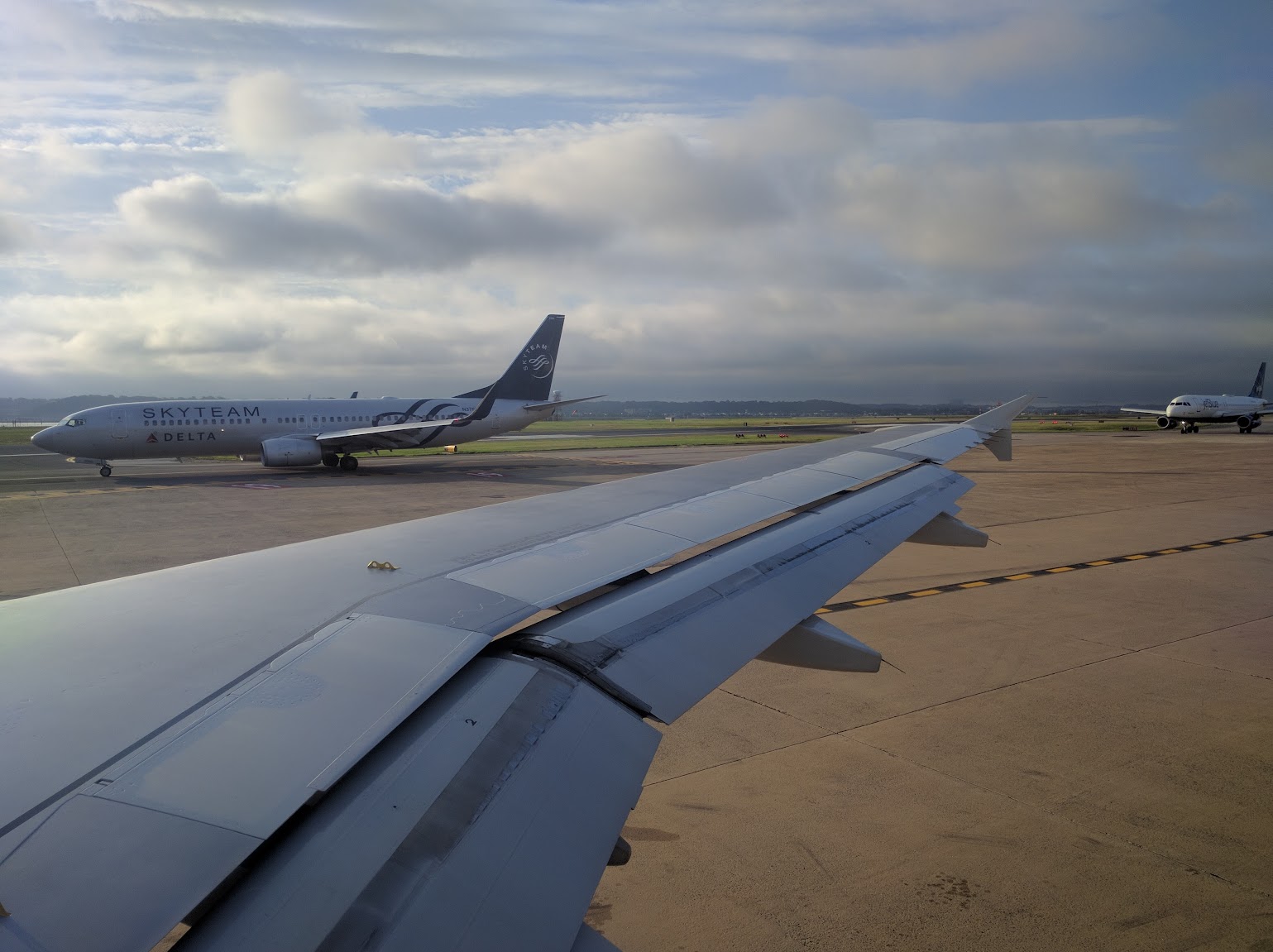 An American 737-800 joining us for a few minutes before departing for LAX. 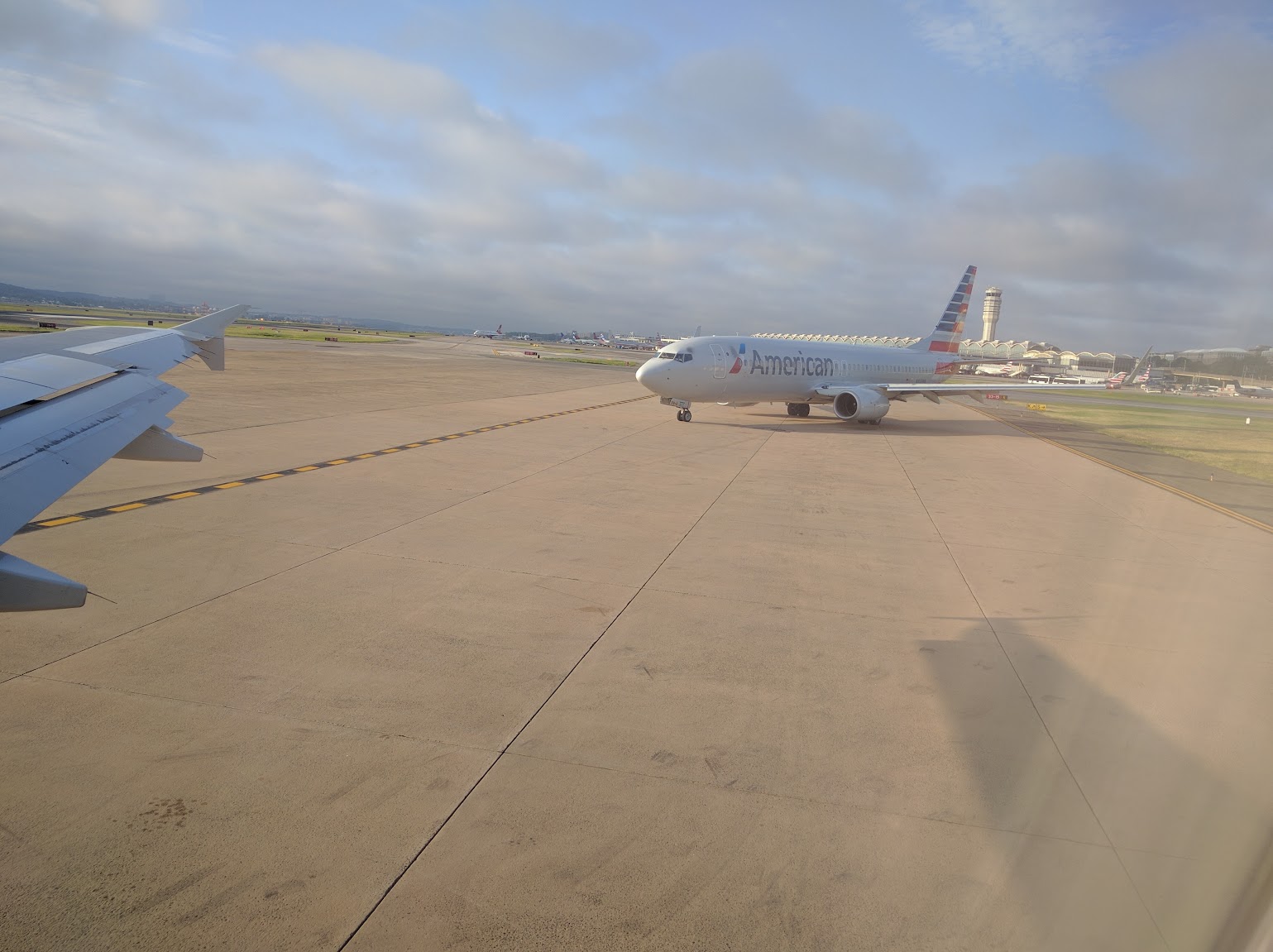 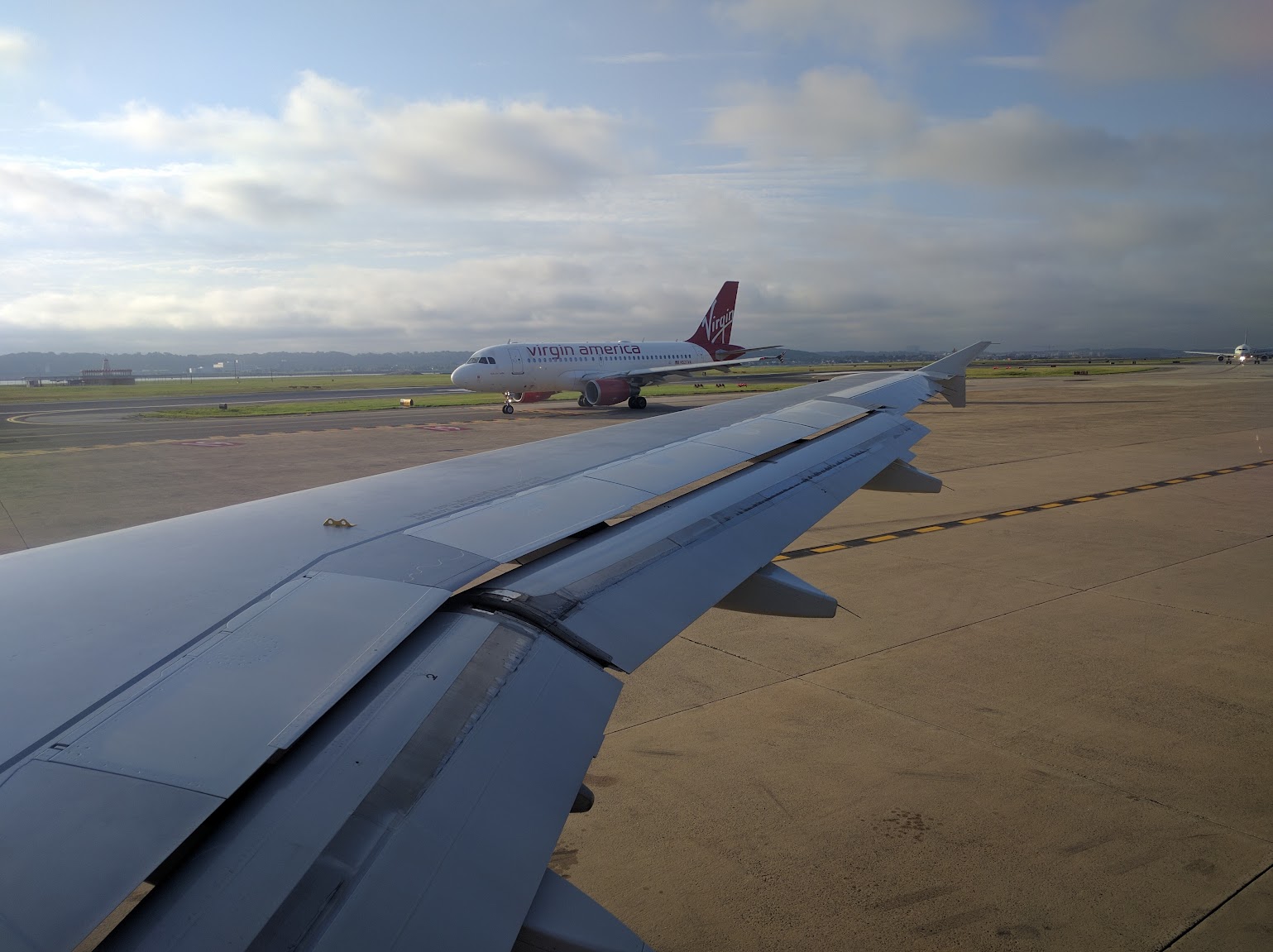 As delays go, this was about as good as it gets for me personally. I had a great view of the departing traffic, and since the captain had turned off our engines and allowed passengers to use their cell phones, I streamed a few heats of Olympic rowing before stopping (the NBC Live Extra app uses data like it's going out of style). 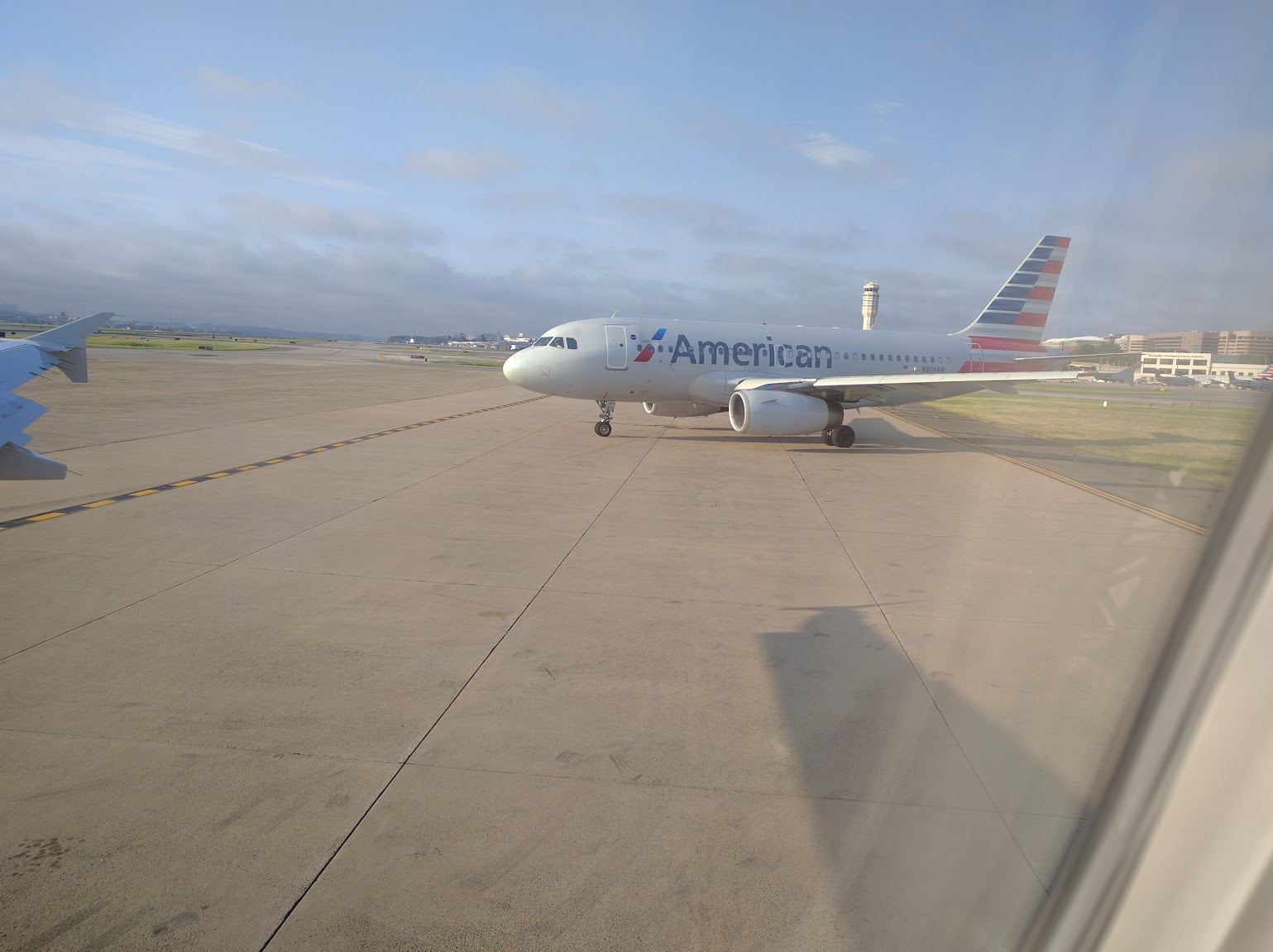 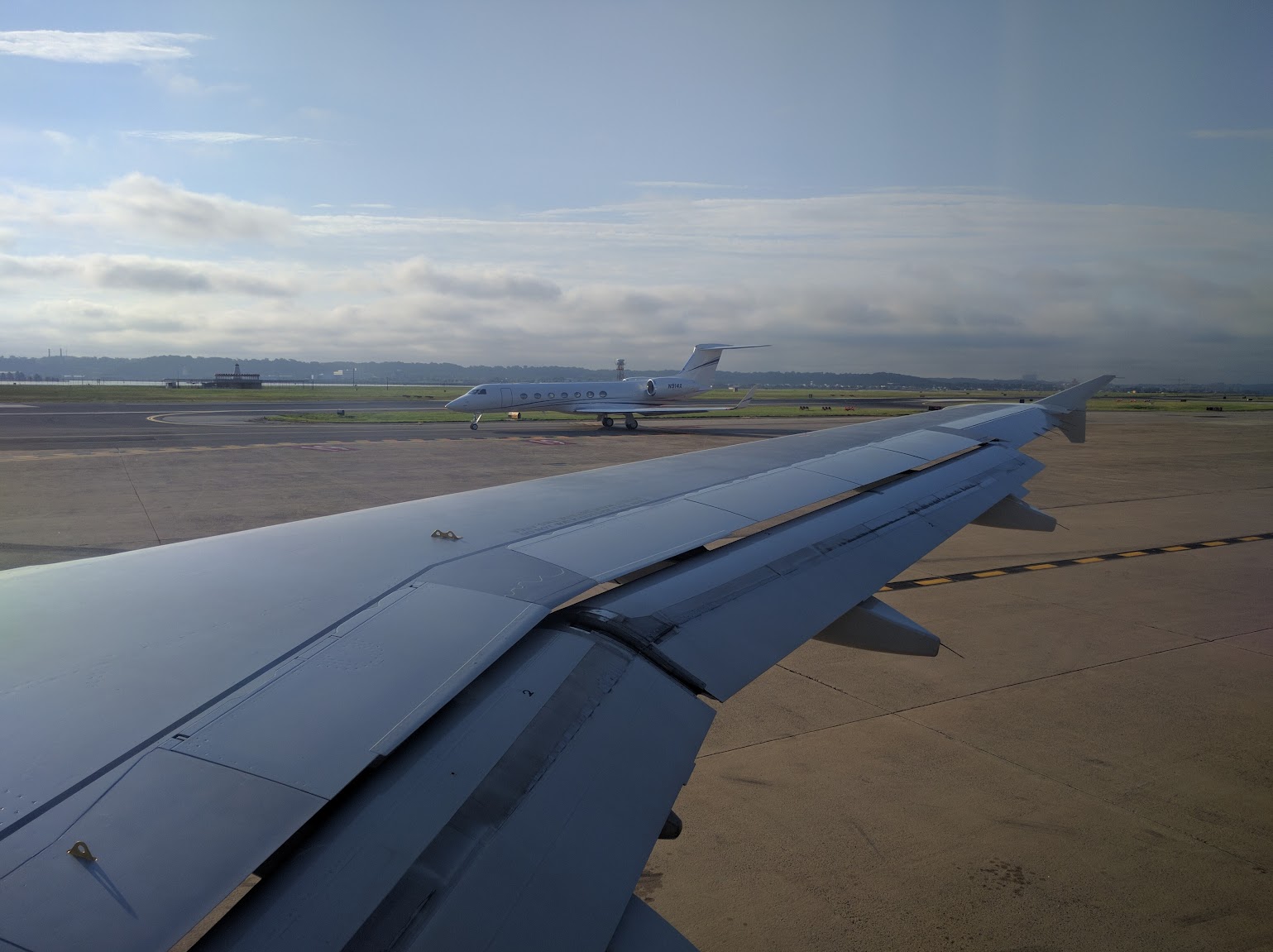 AS1 off to SEA. I've only seen it a few times but I really do like the new Alaska livery. 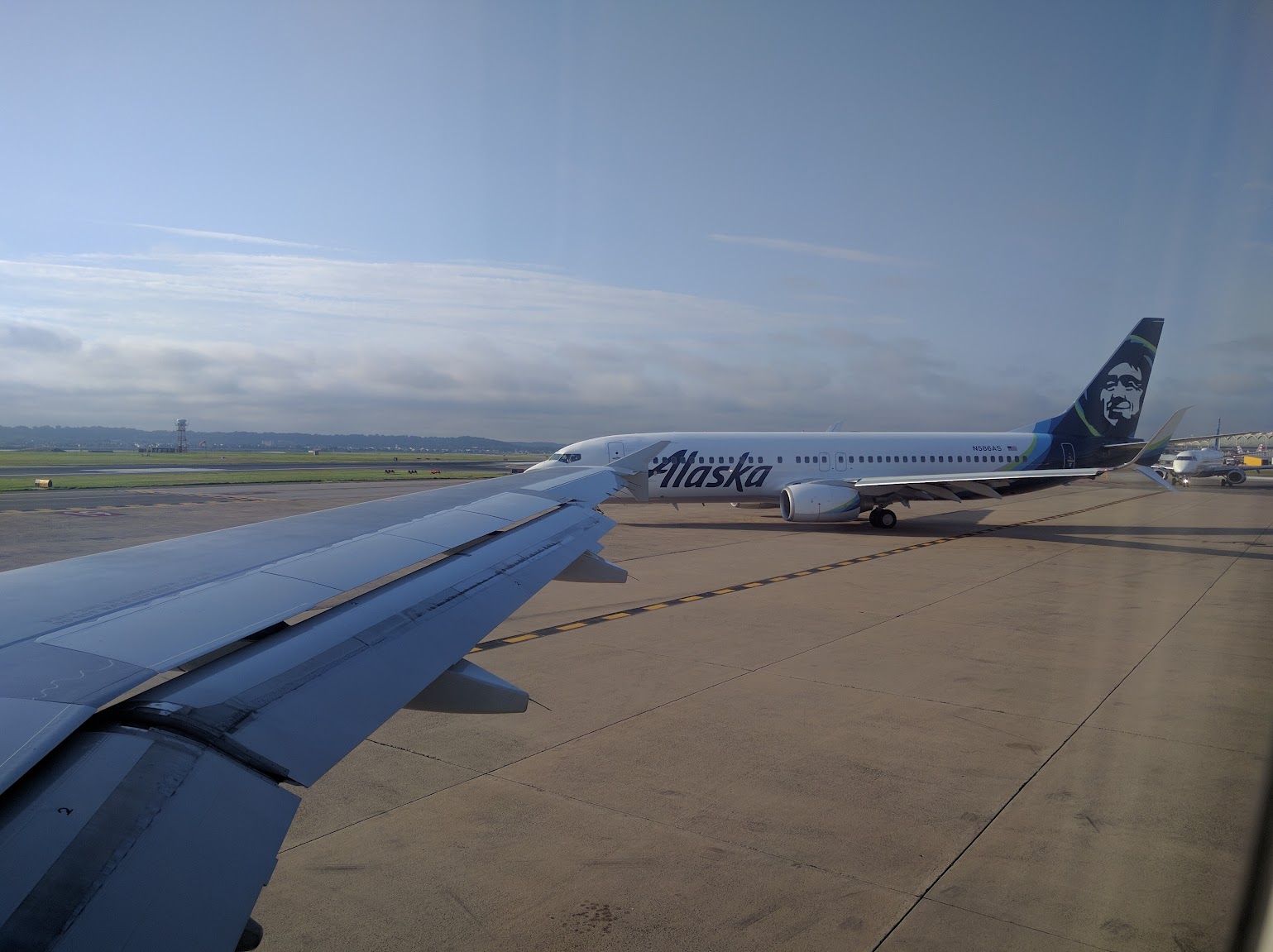 A Delta MD-90 joined us for a few minutes. 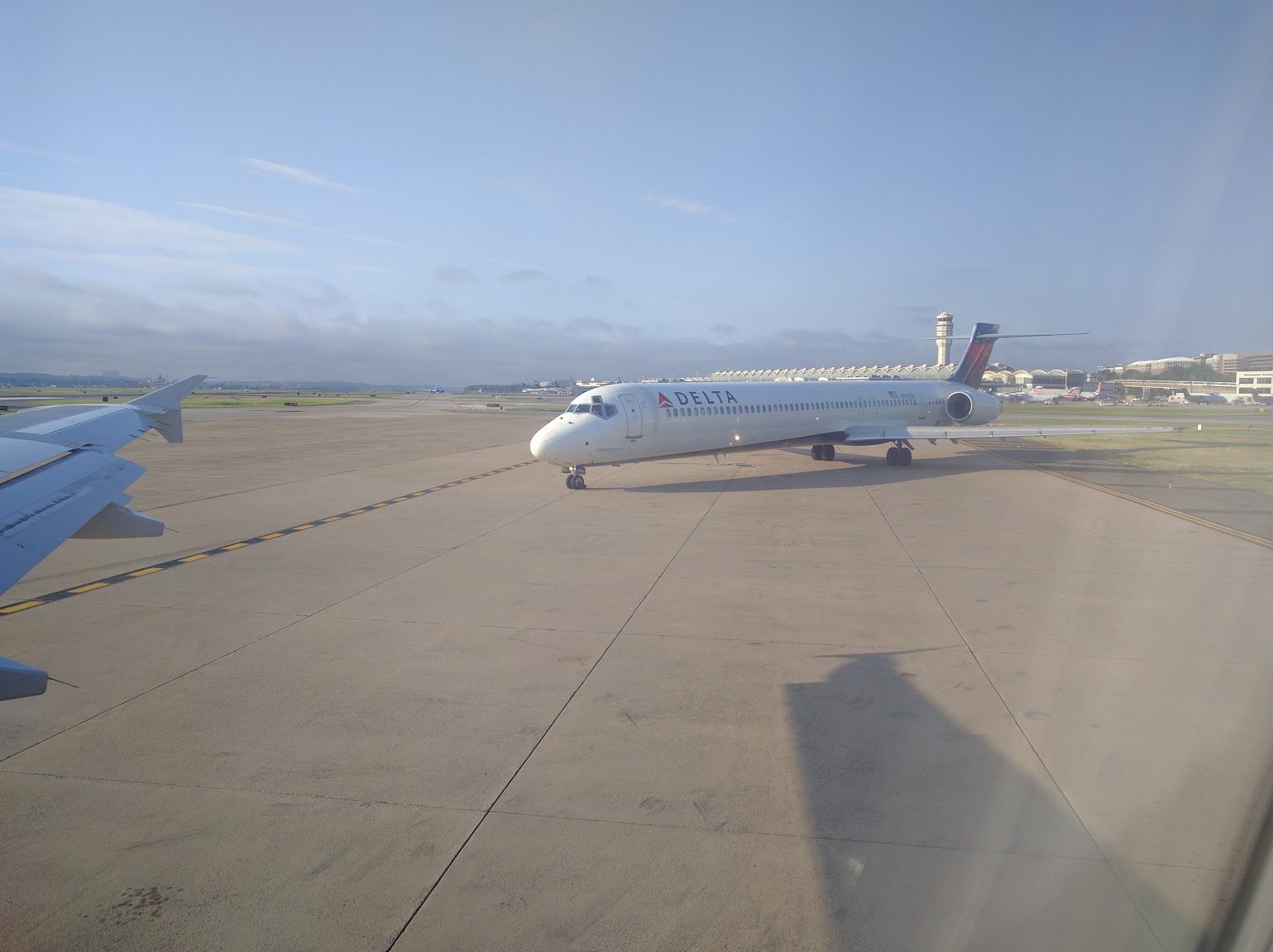 The top of the hour then rolled around. As promised, the captain came on with an update on our situation. The weather over PHL was still forcing single-runway ops, and a ground-stop had been initiated for all inbound flights. The captain then said that he should have more information at 8:25am. Oh well, I still had a decent chance of making my connection, but I'd have to hurry. Let the spotting continue… 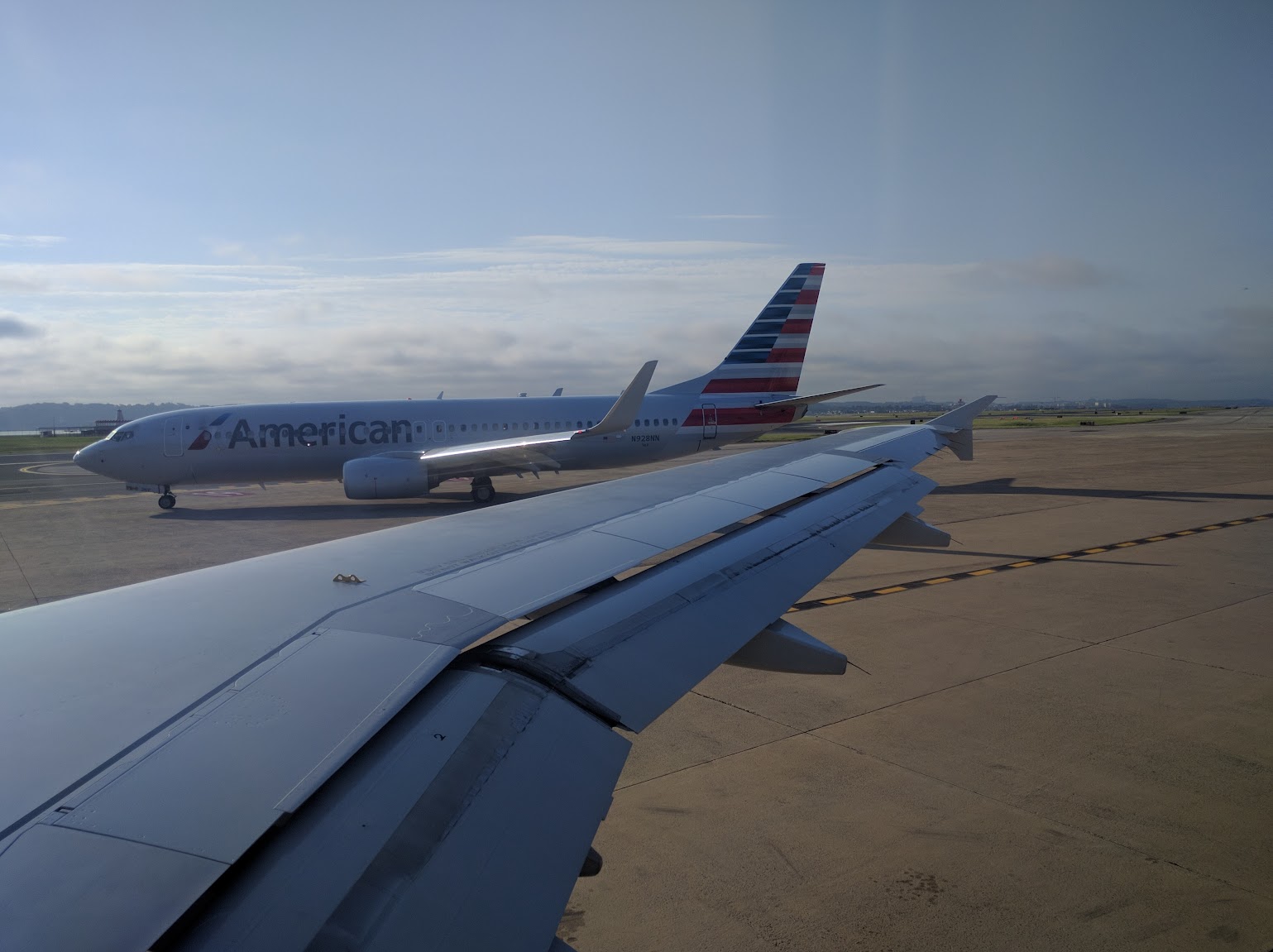 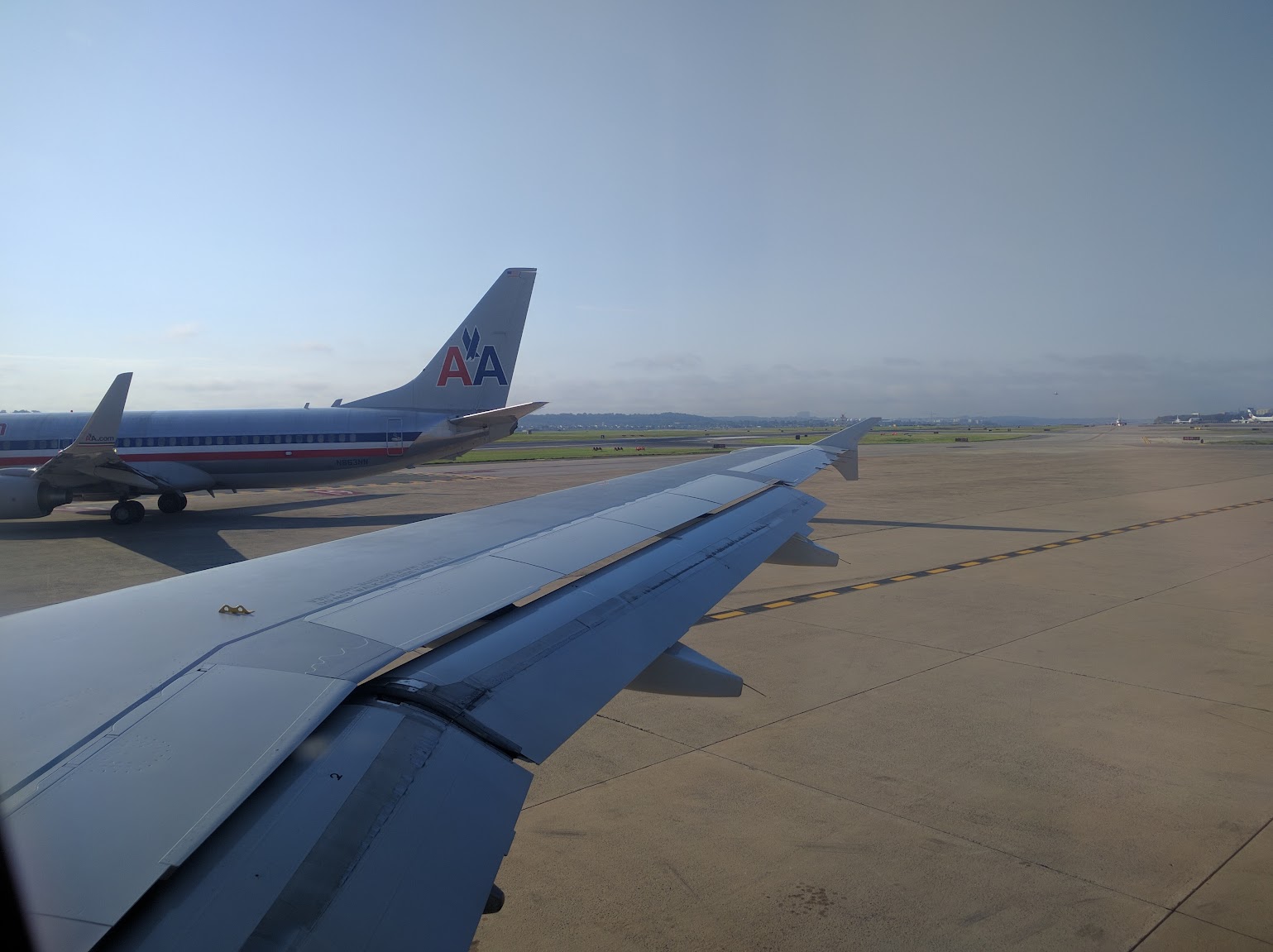 At about 8:30, the captain came back on the PA and announced we had been released for departure. The engines were restarted and we were wheels up at 8:38. The Flight attendants immediately began their service run, offering a choice of water or orange juice. A reduced selection due to the very short flight, but I was still very impressed that they had a service run at all. To give you an even better idea of just how short this flight is: exactly nine minutes after departure the captain announced we had begun our approach to Philadelphia. 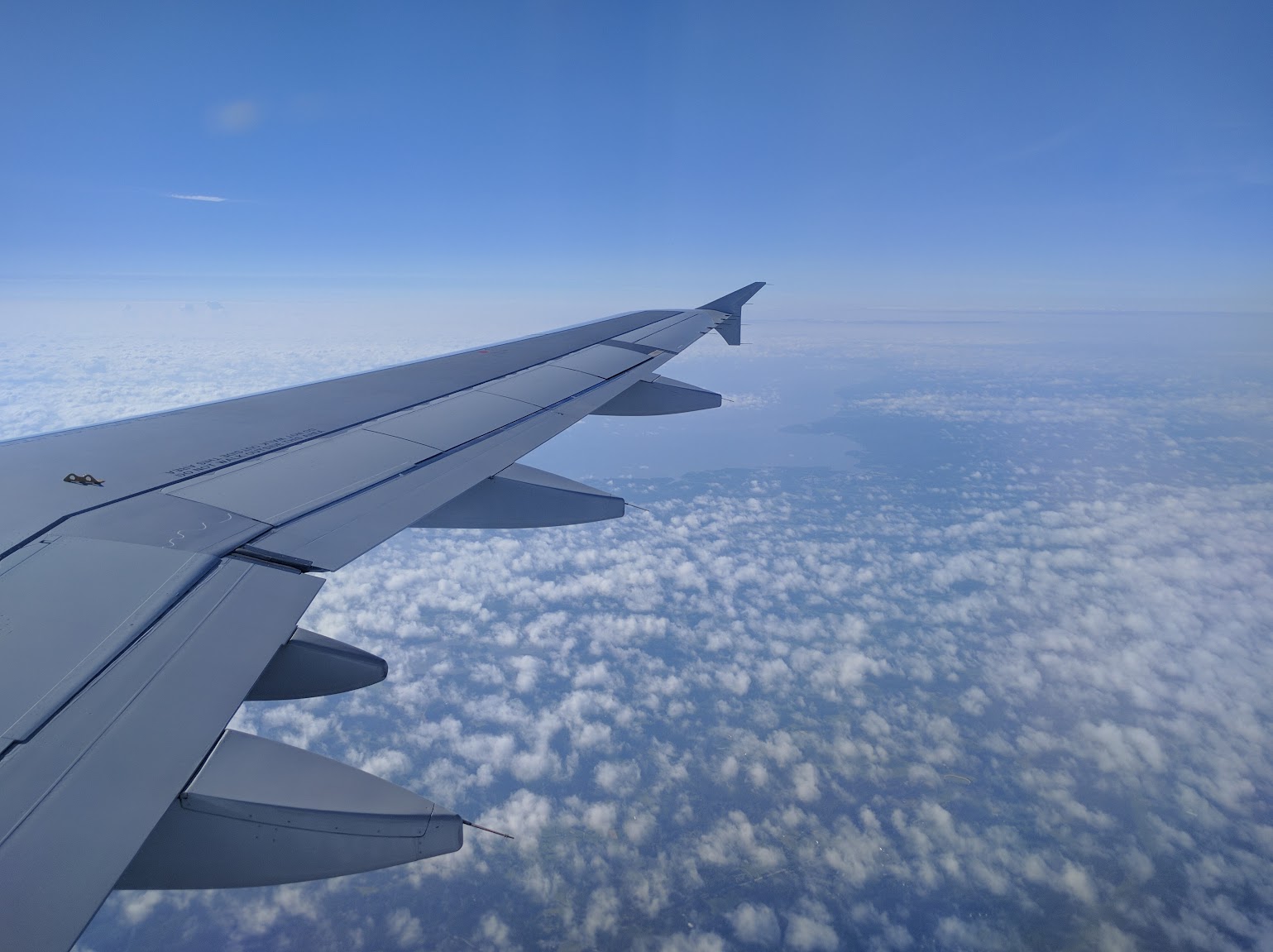 The low cloud layer that had caused our delay. 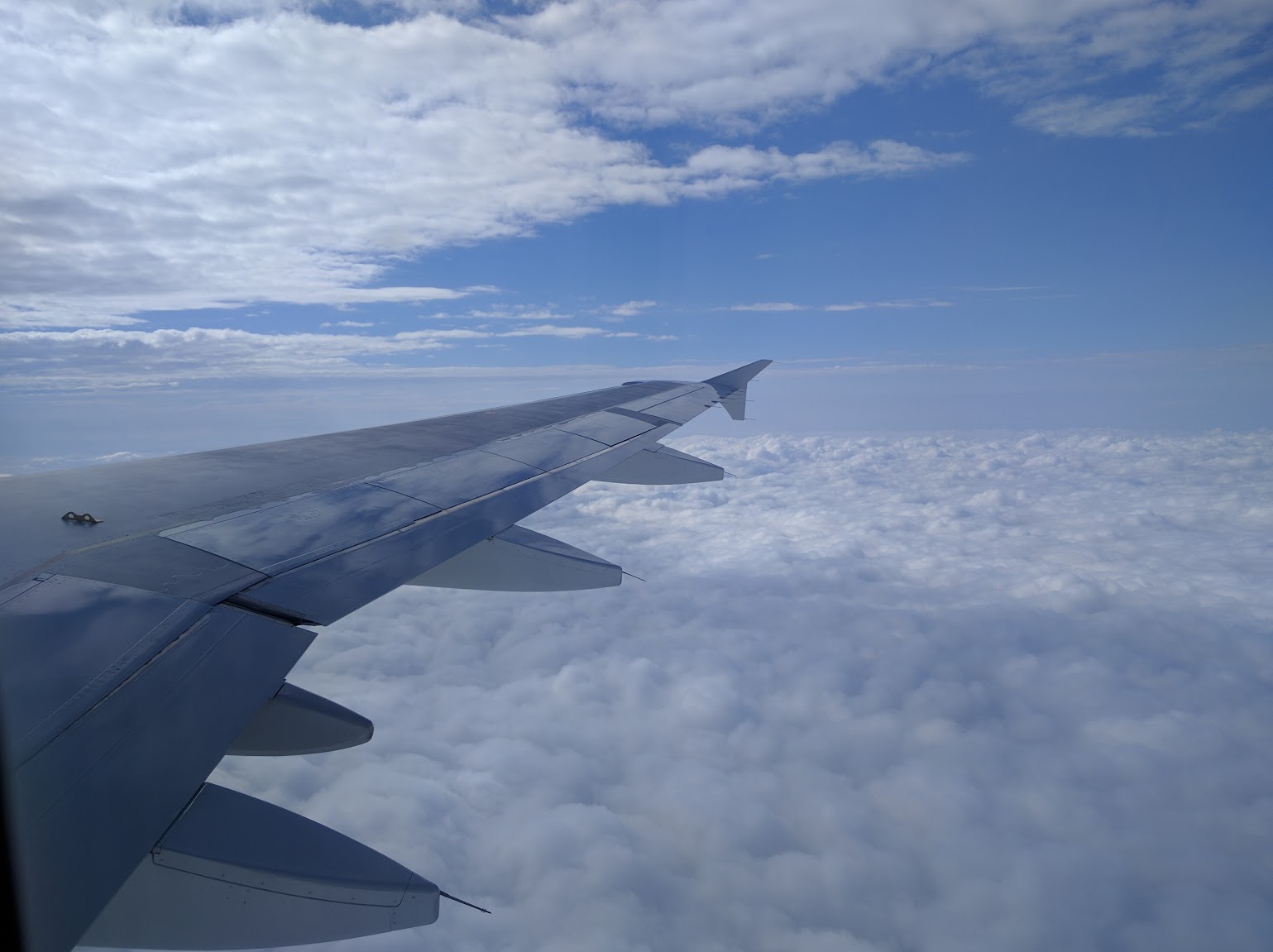 The captain came on the PA and announced that due to the high number of international connections to the Caribbean, we would be arriving into a gate in the international terminal. This was bad news for me, as I'd have to get all the way to Terminal F in a very short period of time.

The flight was pretty uneventful from then on, and we seemed to maintain about 6,000 feet while we flew east of the airport. 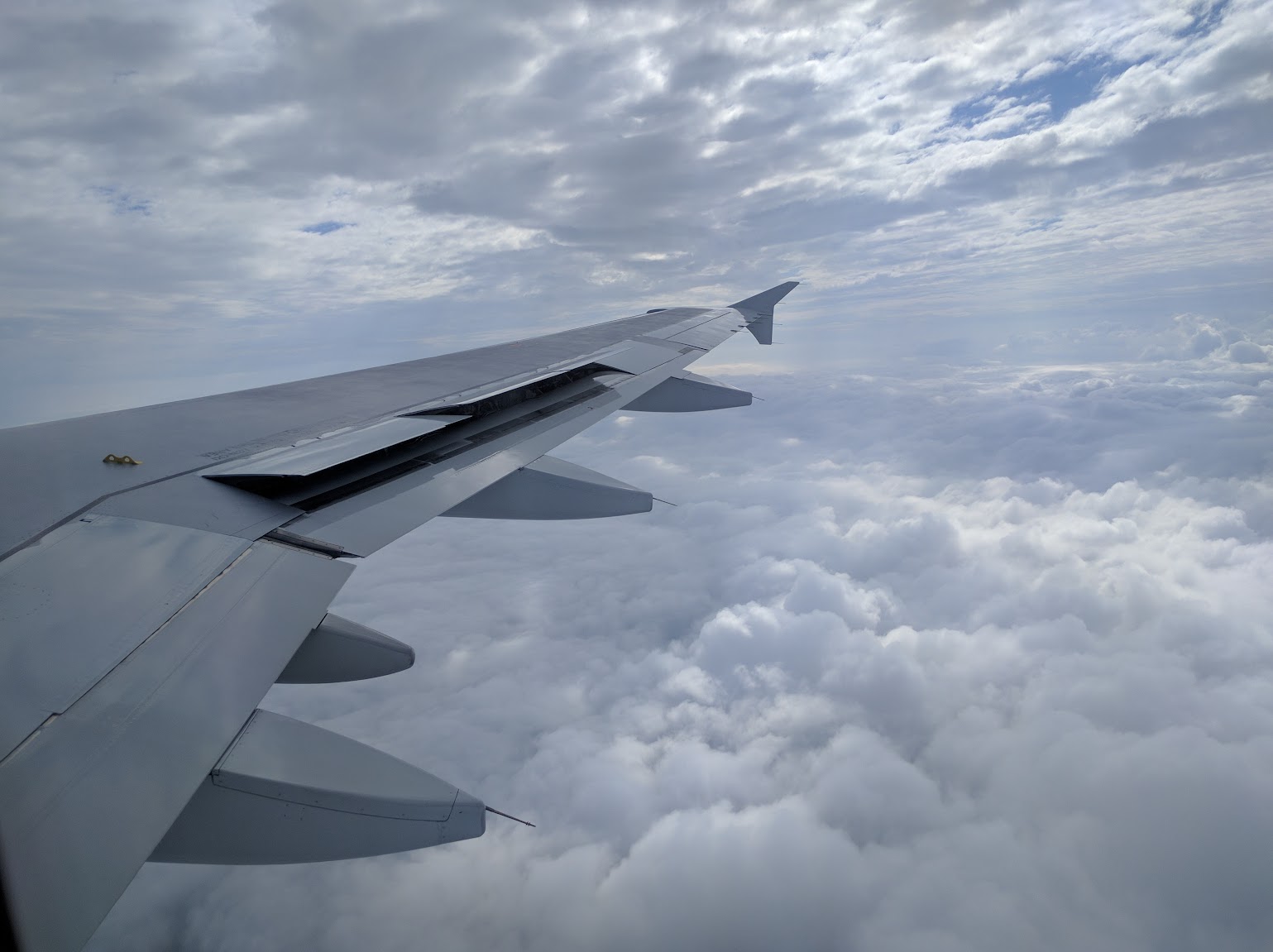 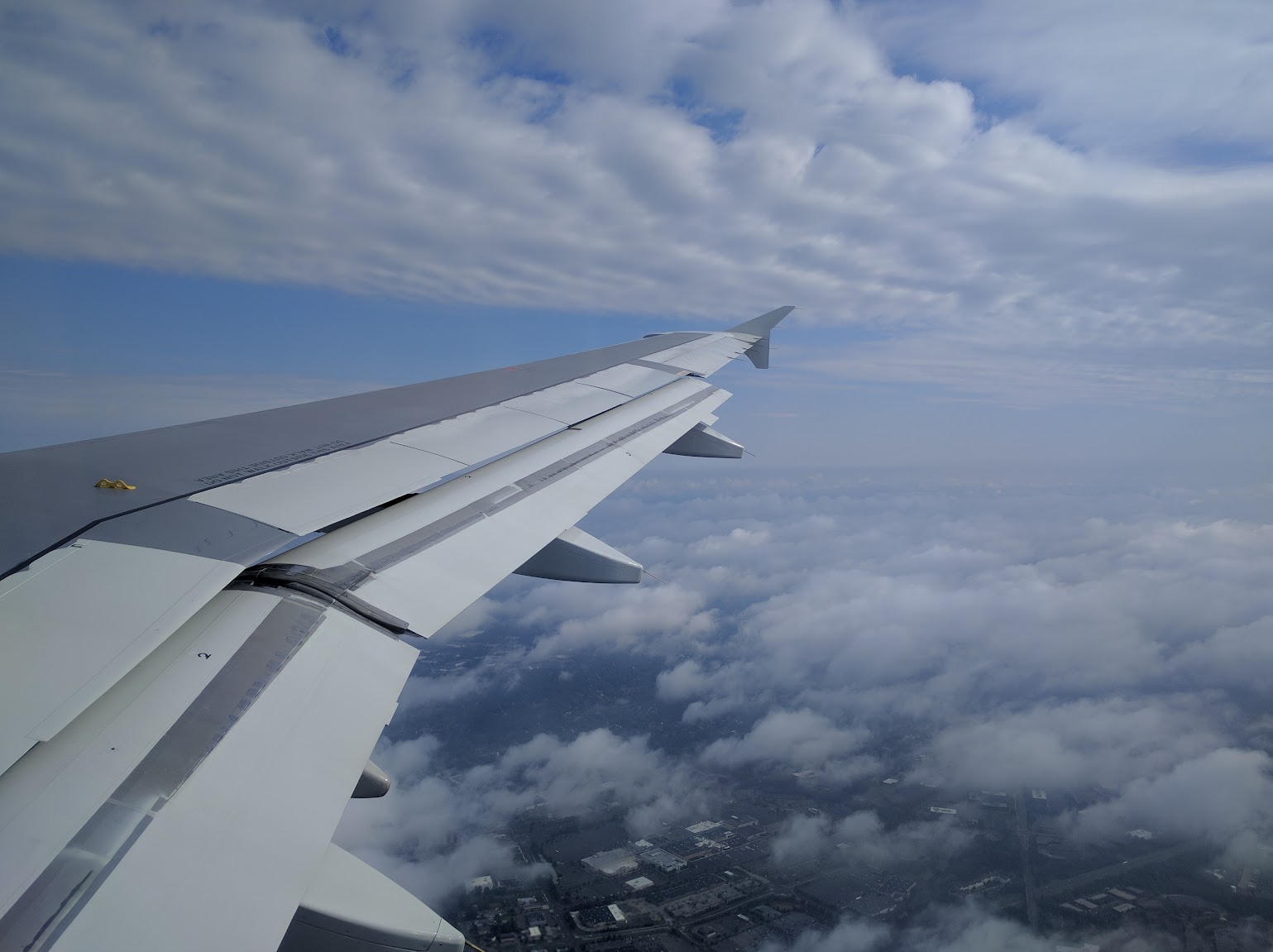 On final for runway 27R. 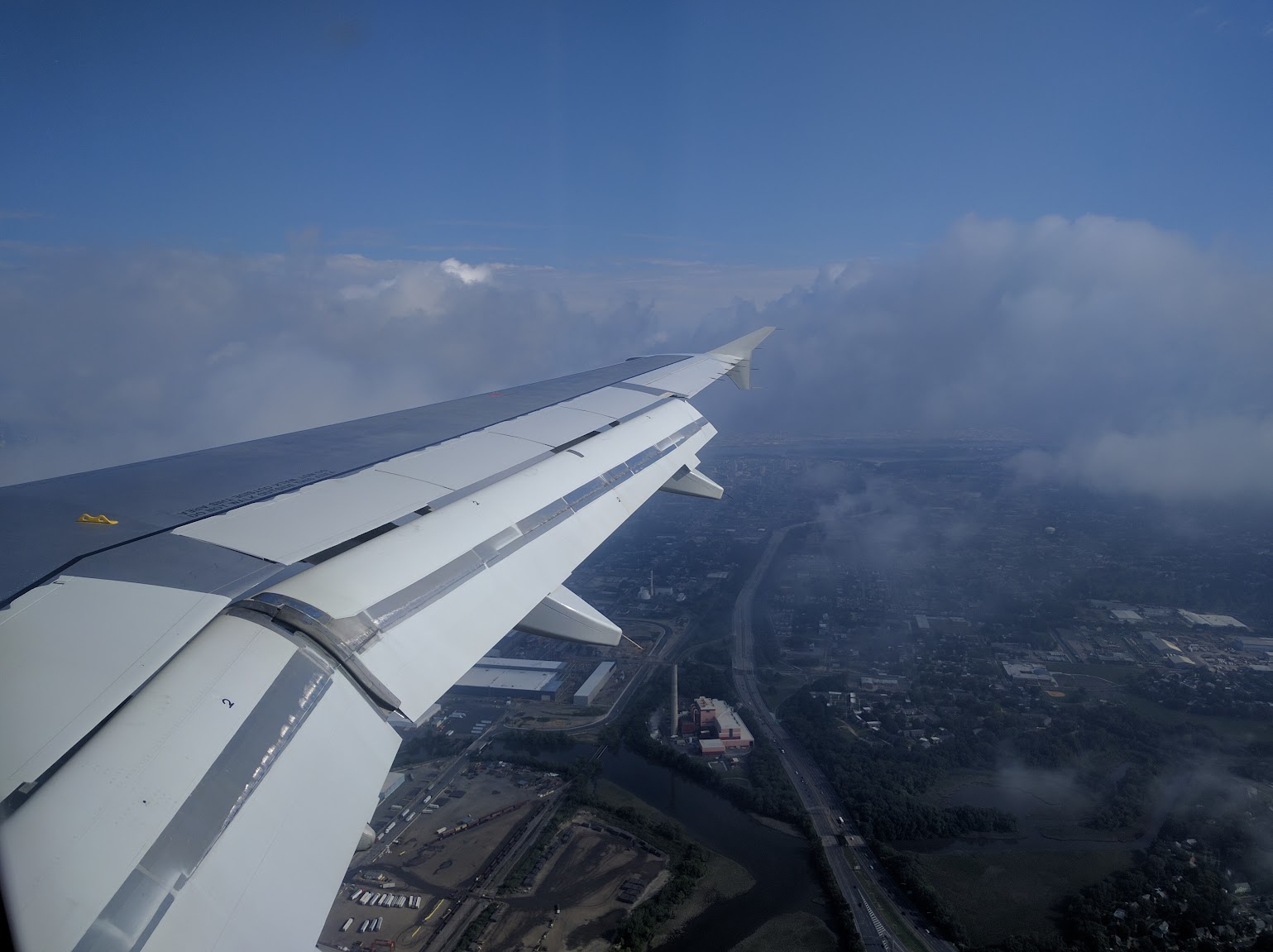 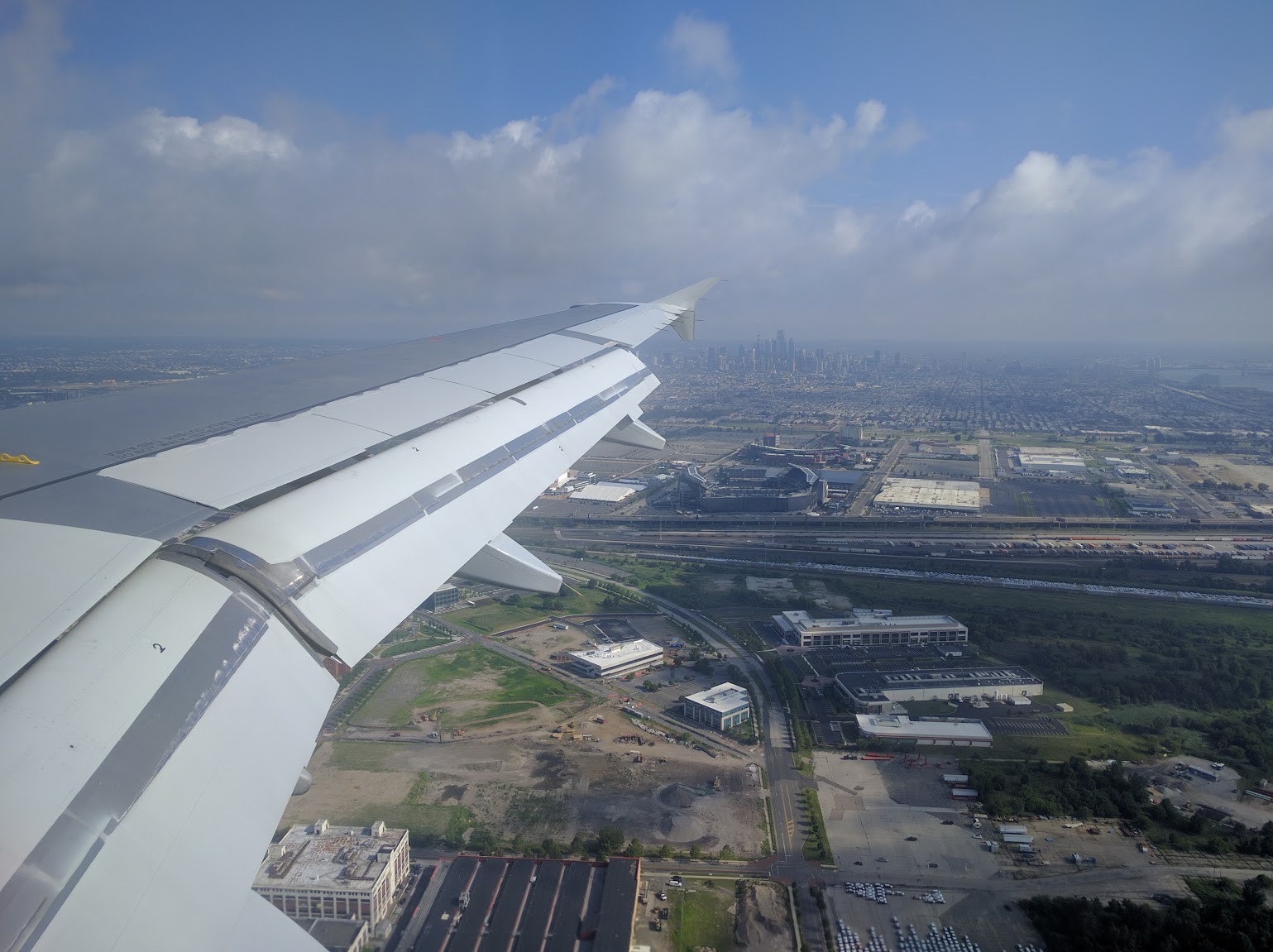 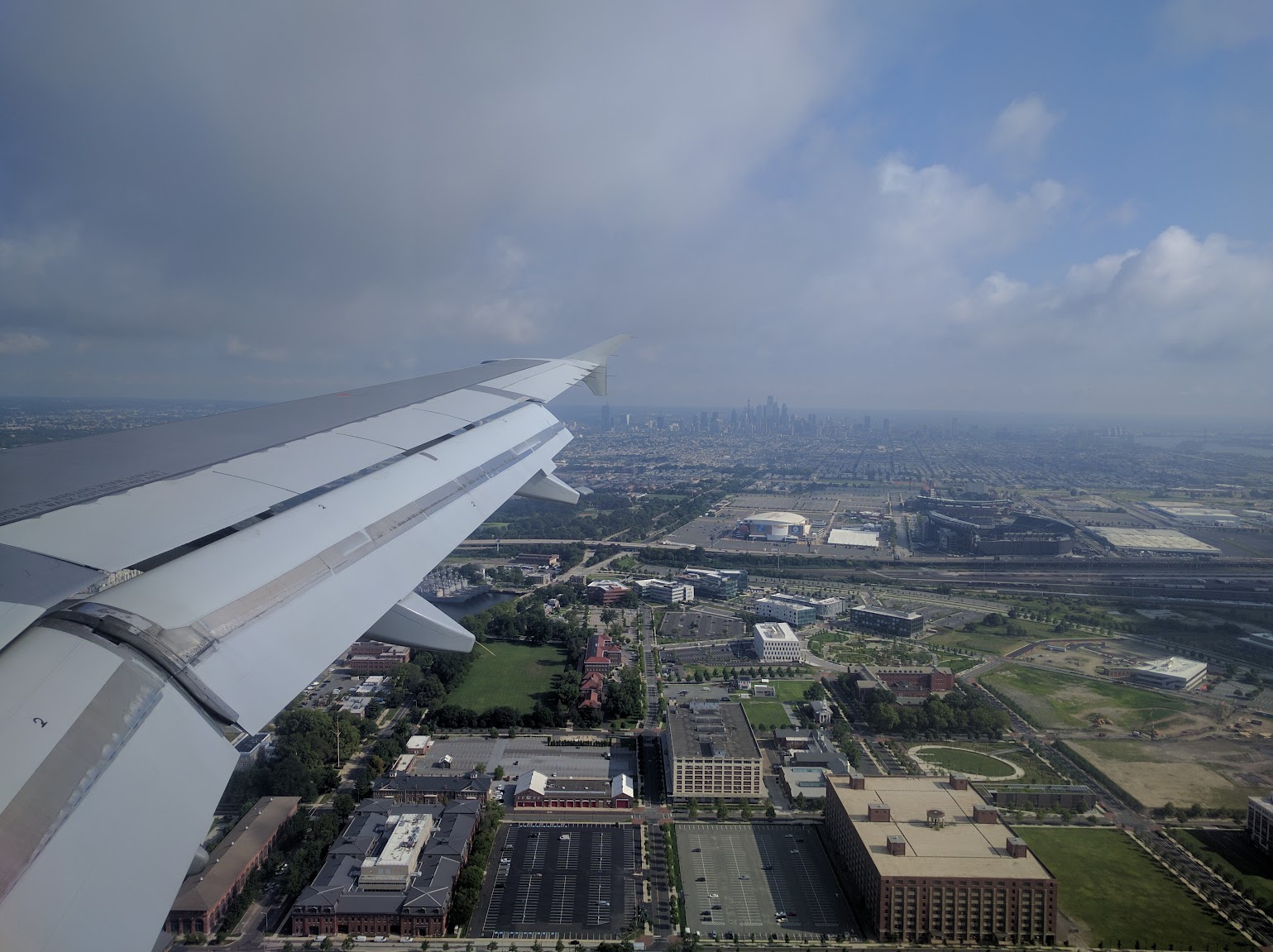 Just off our wingtip is the remnants of N113UW, which experienced a nose gear collapse in March of 2014 due to pilot error (details here). 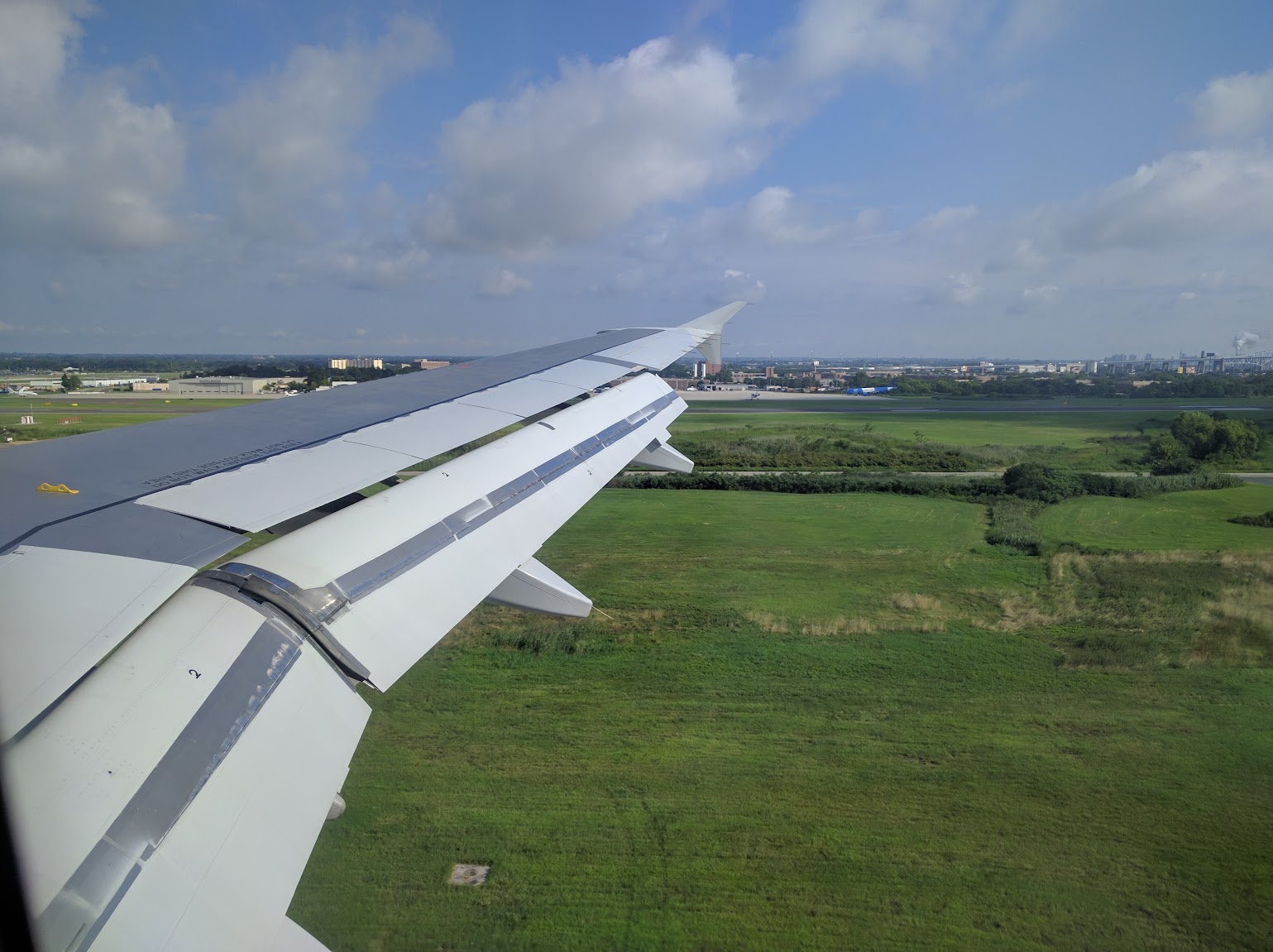 Exiting the runway at 9:16 with a great view of part of the American hub. With an actual flight time of 38 minutes, my shortest flight will remain DFW-AUS for now. 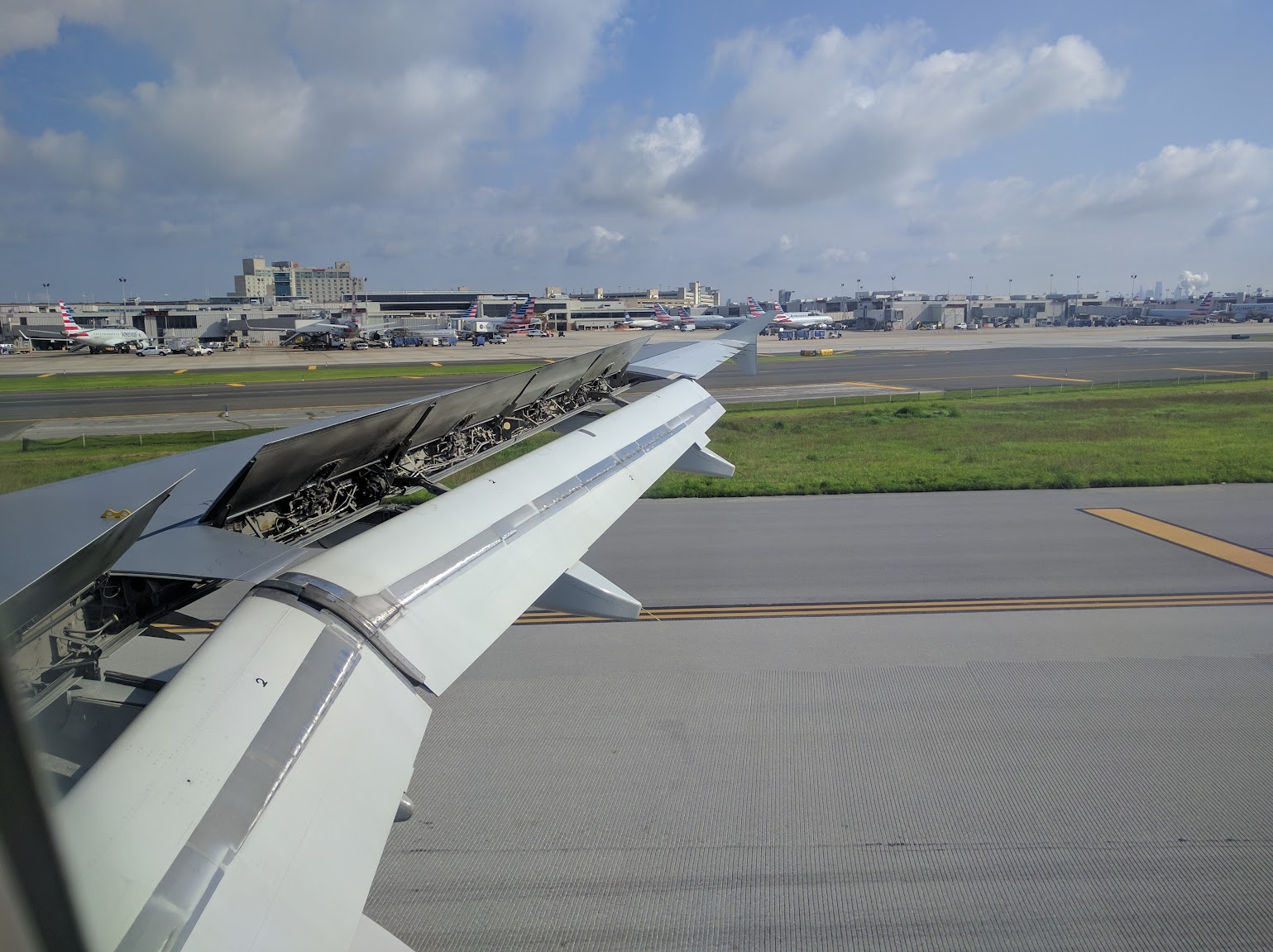 We arrived at gate A24, at the very, very end of Terminal A-west. I'll leave this report there. The next part will include a story of missing and making a special Dash-8…
See more

A quick American Airlines flight. The seats and cabin are roomy and comfortable, the flight attendants were friendly and attentive, managing to complete a full-cabin (although limited selection) beverage service. The delay was unfortunate, and ended up being longer than our actual flying time, but there's not much American could've done differently to handle the situation.

The contributors of Flight-Report published 4 reviews of 2 airlines on the route Washington (DCA) → Philadelphia (PHL).