#38 out of 74 Airlines A minimum of 10 flight-reports within the past two years is required to appear in the rankings. 893 reviews

As promised, here's part II of my LUX-LYS-MRS trip. The flight was operated as planned by an ATR 42-500. The flight was delayed 20 or 30 minutes as they had balancing issues. As a result they didn't load any catering and only loaded two large bottles of water. Space was quite limited and sitting in the window seat felt quite cramped (but was bearable for such a short flight).

Once boarding was completed, we quickly taxied to the runway threshold and we were in the air in no time. My window was in bad shape and thus decreased the quality of my pictures. A few minutes south of Lyon, the clouds below finally cleared and there was finally something to look at. 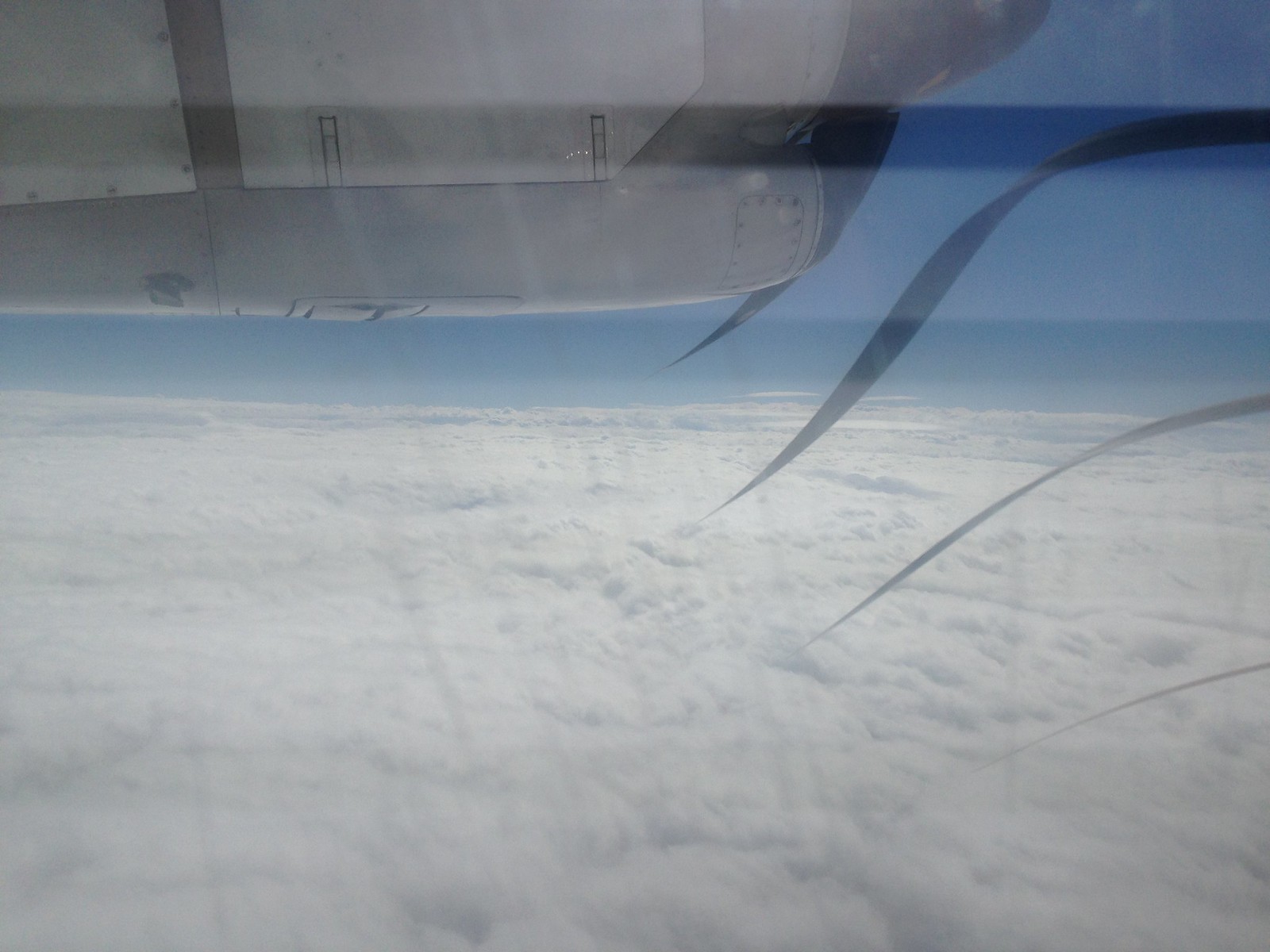 Passing Orange (and the military base east of Orange) 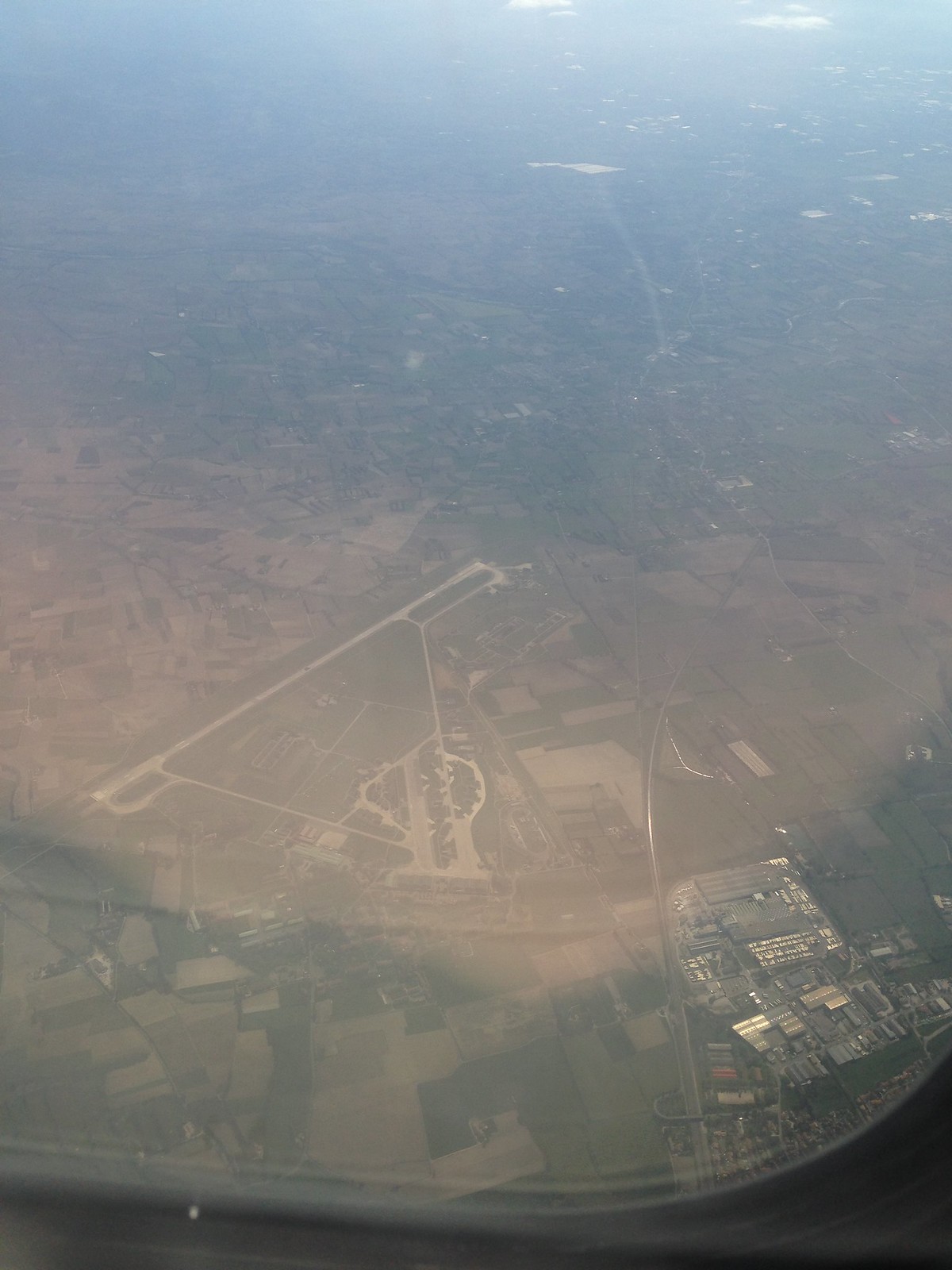 Passing over Istres. You can see the village of Cornillion-Confoux along with what I suspect is a grass landing strip (?) in the foreground. Further away you can see Salon Airport (just below the engine). The canal transporting the azure water is part of Canal de Provence, which provides water to the whole region 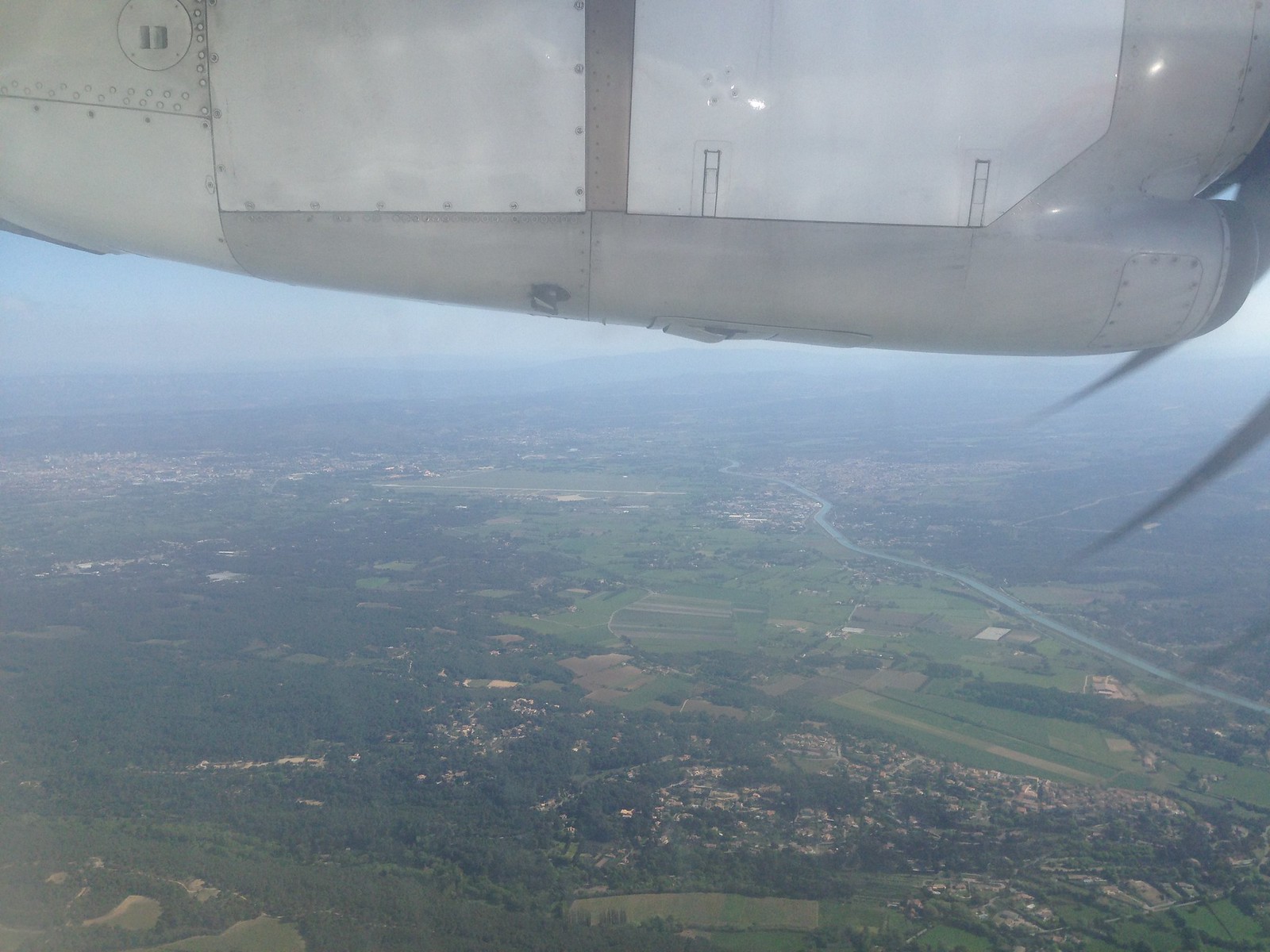 Same view from a slightly different angle. Short afterwards we were over the Etang the Berre (literally translates into Berre Lagoon) 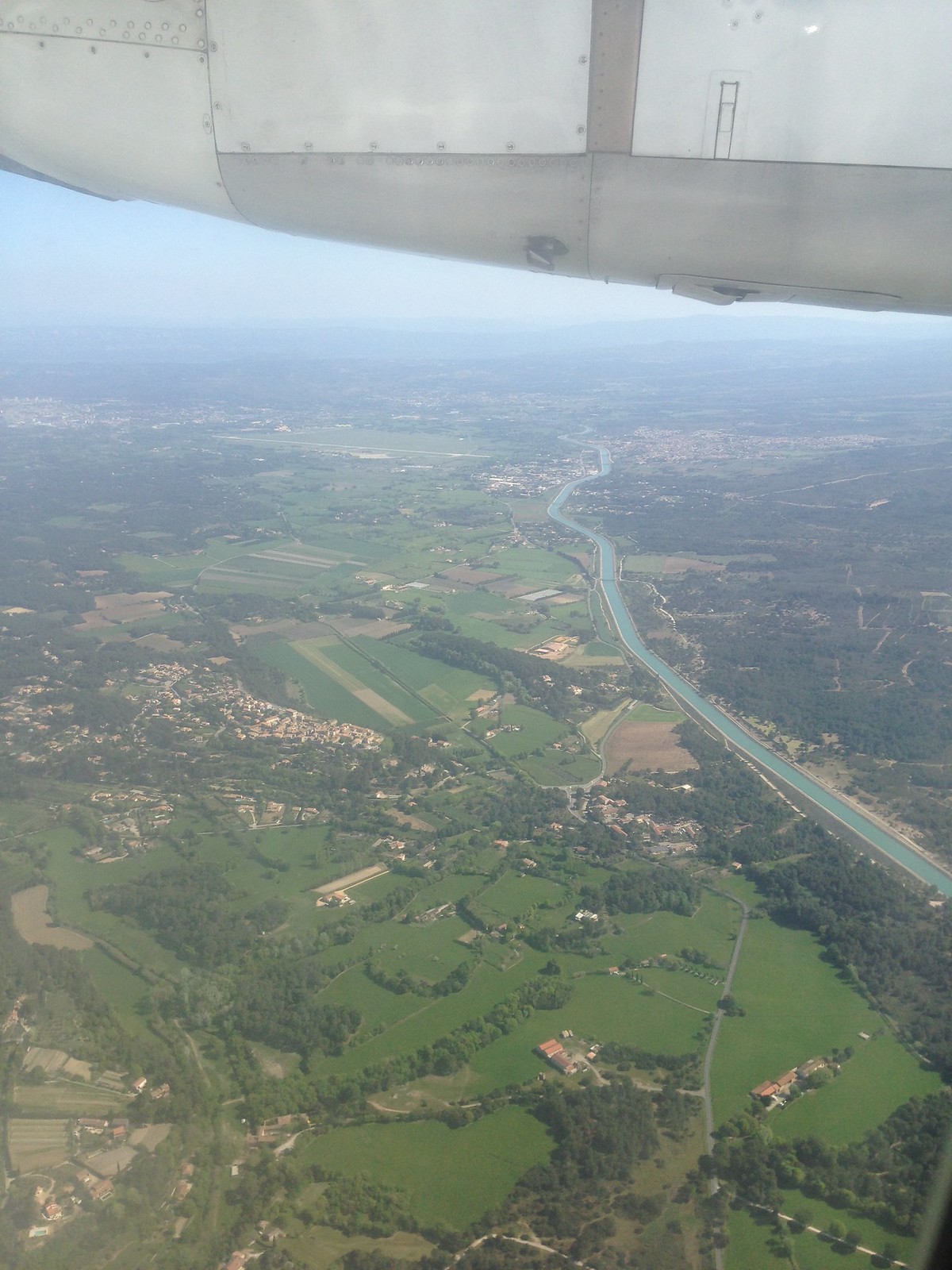 Approach over the Etang de Berre (You can see in what state the window was.) 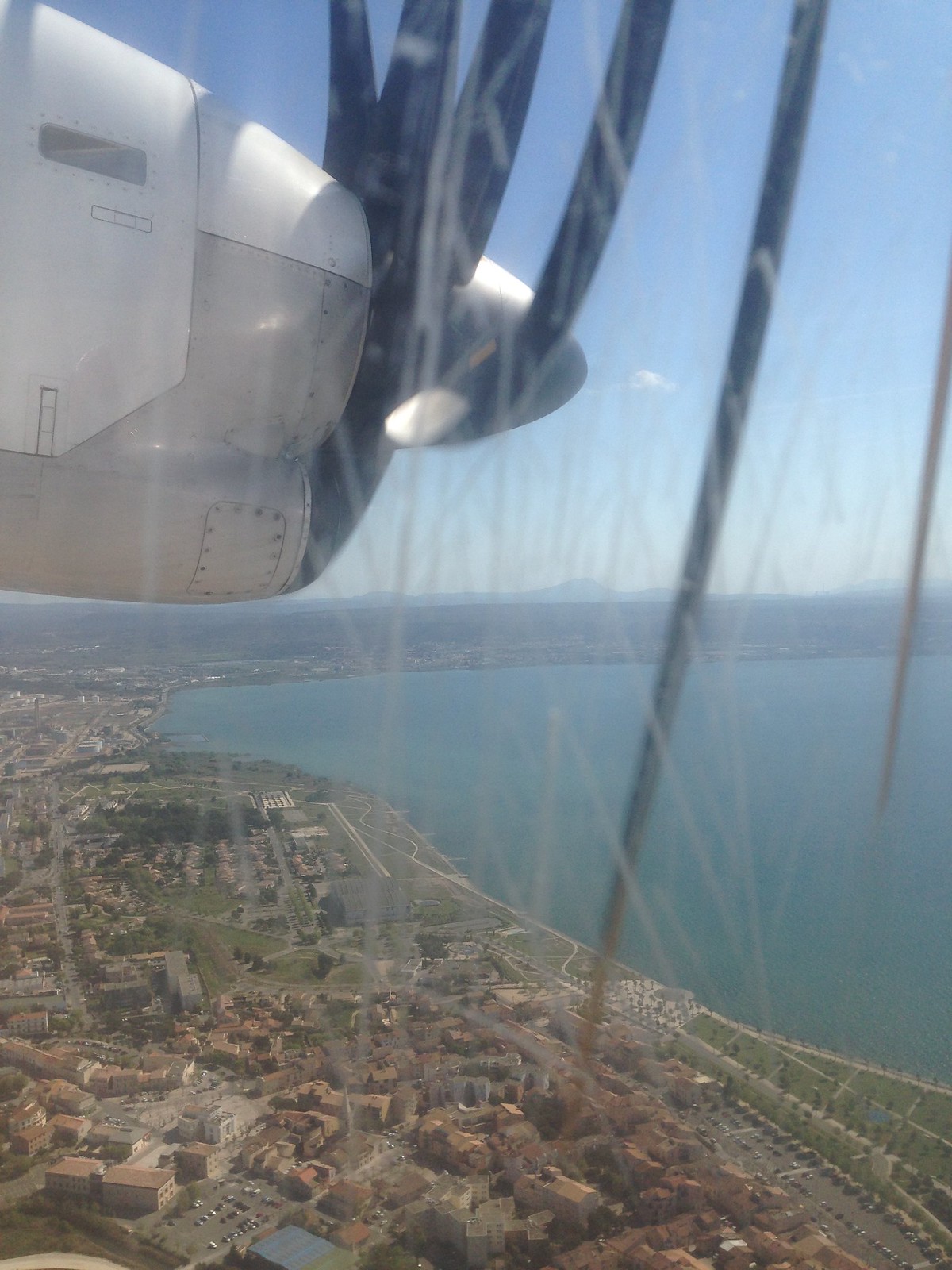 The beauty of the water may be somewhat deceptive, as the lagoon is surrounded by large industrial sites and notably large refineries. While the water quality has dramatically improved over years (back in 1957, fishing was prohibited as a result of the pollution), I'm personally have reservation to spending the day on the beach with massive refineries in line of sight. After all there are better alternatives in the region 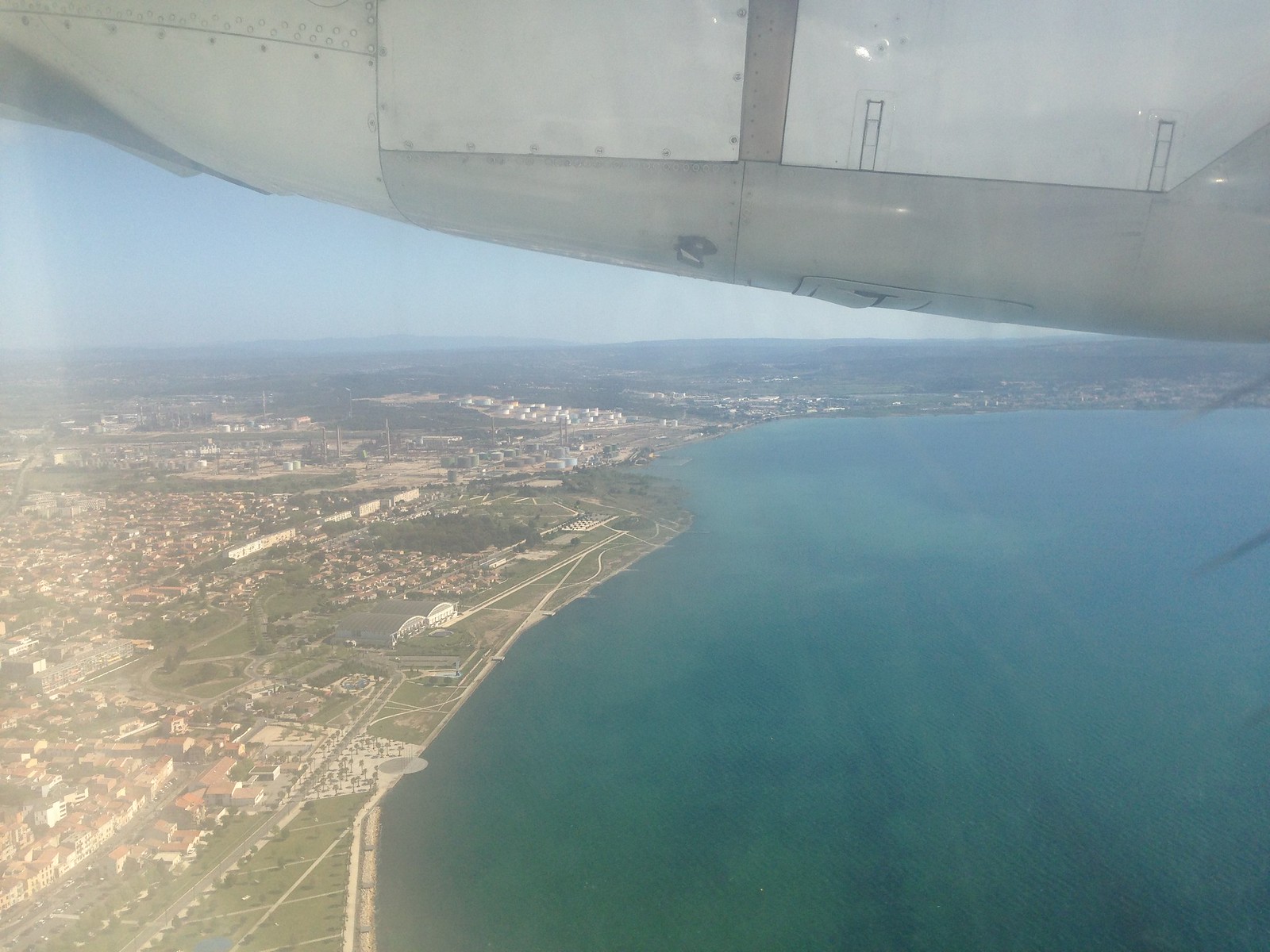 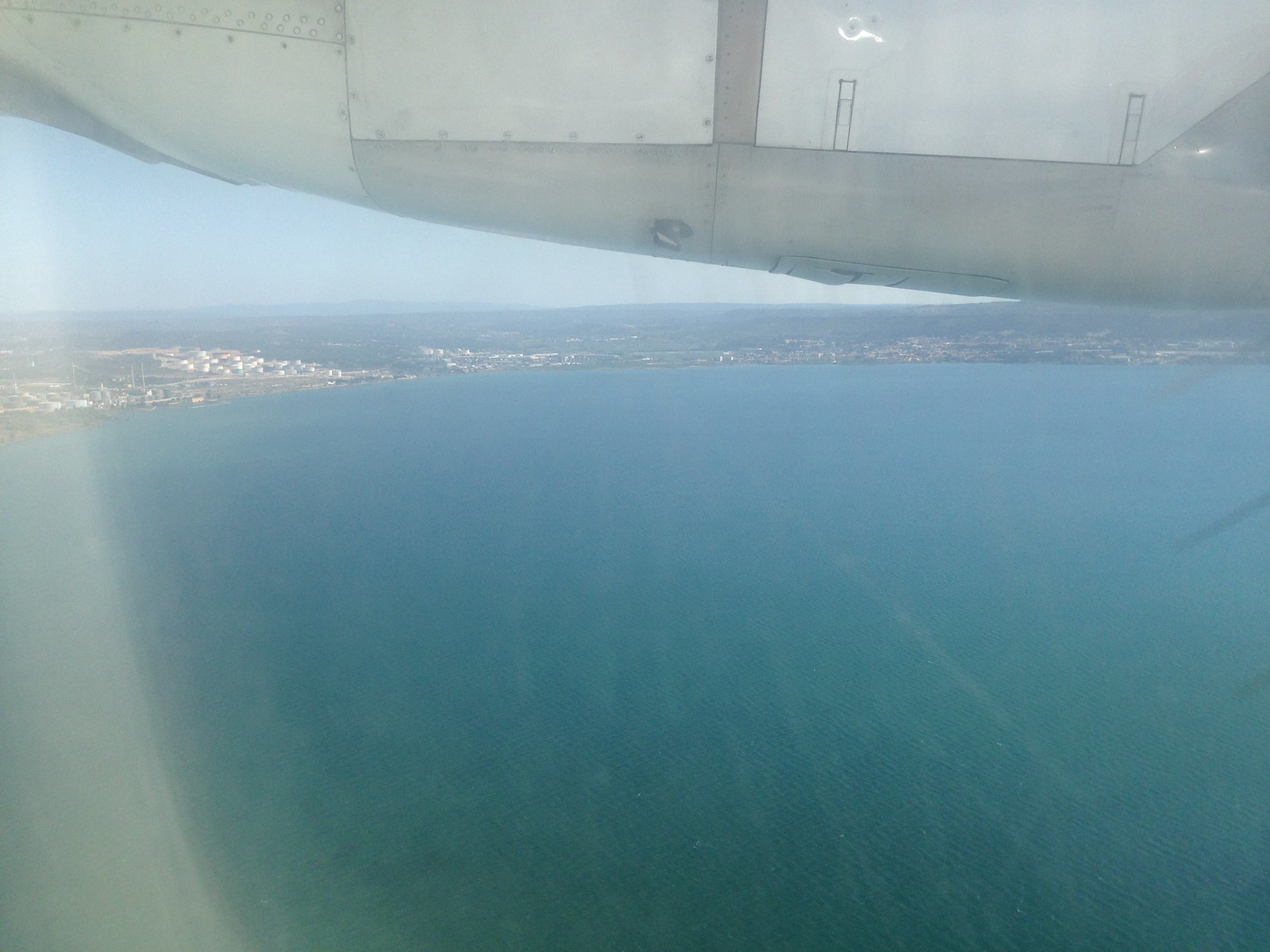 A bus took us to the arrival level of Terminal 4, in front of which buses to the major cities of Provence stop. As a result of the Plan Vigipirate and the state of emergency (that is still in effect as we speak), there was visibly more police presence. I had no checked bag and could immediately proceed to the bus stop that would take me to my final destination. As a exited the terminal, another 6-men strong military patrol arrived in front of the terminal. While the terminal was clean, calm and very easy to navigate through, there were heightened security measures. Overall it probably took 5 to 10 minutes to get from the aircraft landside, which allowed me to catch the bus, that was about to drive of.
See more

What I liked:
- It was a quick flight from LYS to MRS.
- Getting land side in MRS was extremely efficient (As it was a domestic flight, there were no identity checks and you could just "walk out")
- The crew did their best. They were professional and friendly. They did two rounds of drinks (water only)

What I didn't like:
- The organization aspect of my journey: As I explained in the trip report of the previous flight, the operations of A5 seemed somewhat chaotic. I have however to point out that the crew did their best and to arrive punctual.

The contributors of Flight-Report published 3 reviews of 1 airlines on the route Lyon (LYS) → Marseille (MRS).