By HKGSpottersSquad 2591
Published on 5th April 2017
Hi, and welcome to HKG Spotters Squad's first Trip report!, Our reports are written by our members and may vary in how they are written. This will be a 4 part trip report covering Korean Air's Economy Product used on their longhaul fleet, but flown on Asian routes. This report is written by Kai Marcel Scholz.

After passing through the security check and immigration I was airside and unsurprisingly HKG is not crowded around midnight even though there are a large amount of longhaul flights departing next to Red eye flights to regional Asian destinations. The gate assigned for KE608 was 36, near the end of the terminal which is slightly annoying but manageable. The gate sits at the back right side of the terminal at the corner of the Y shape of the building. 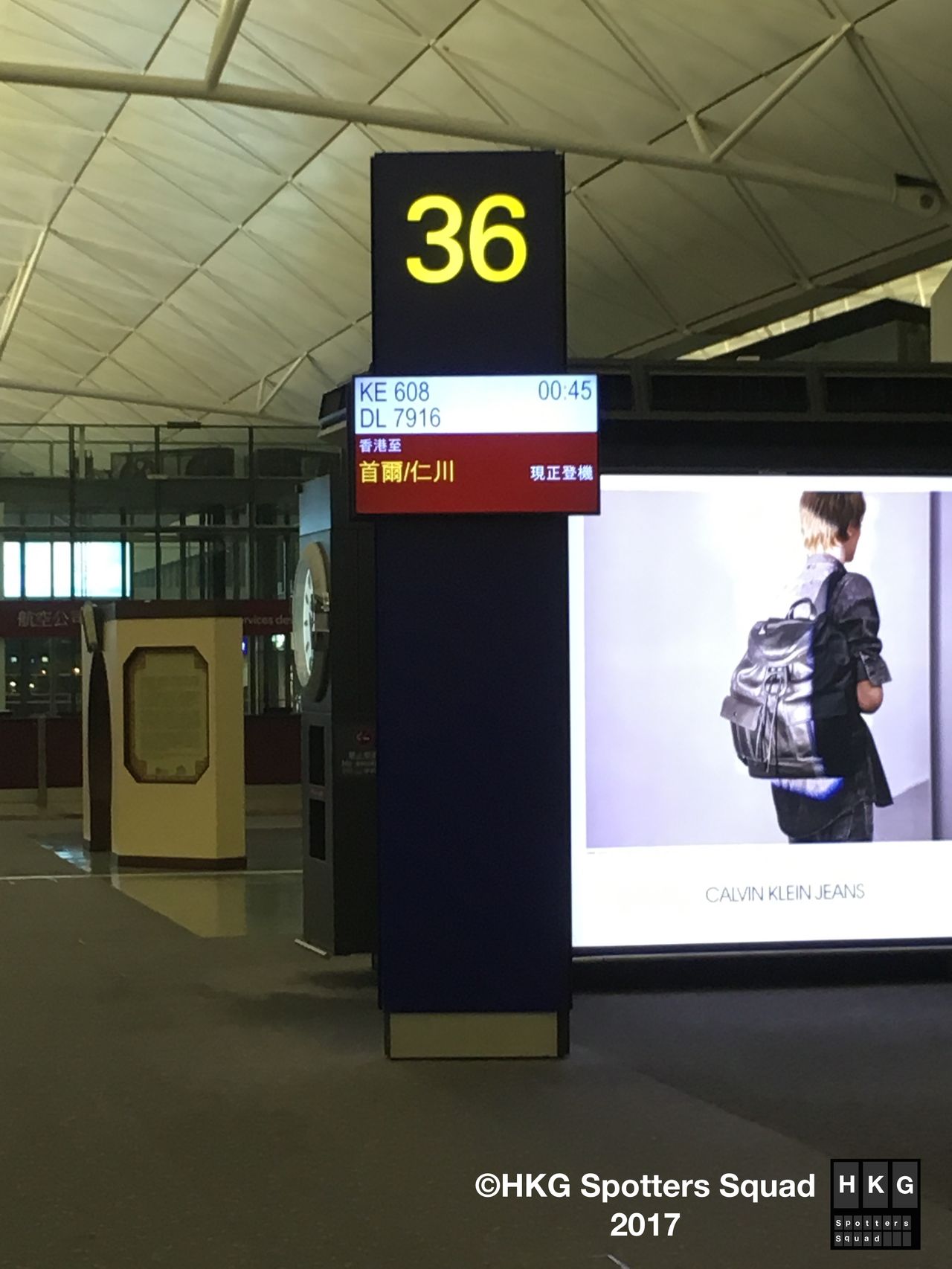 As visible on the photos, HKG is overhauling the Gate signs to a full length Screen. 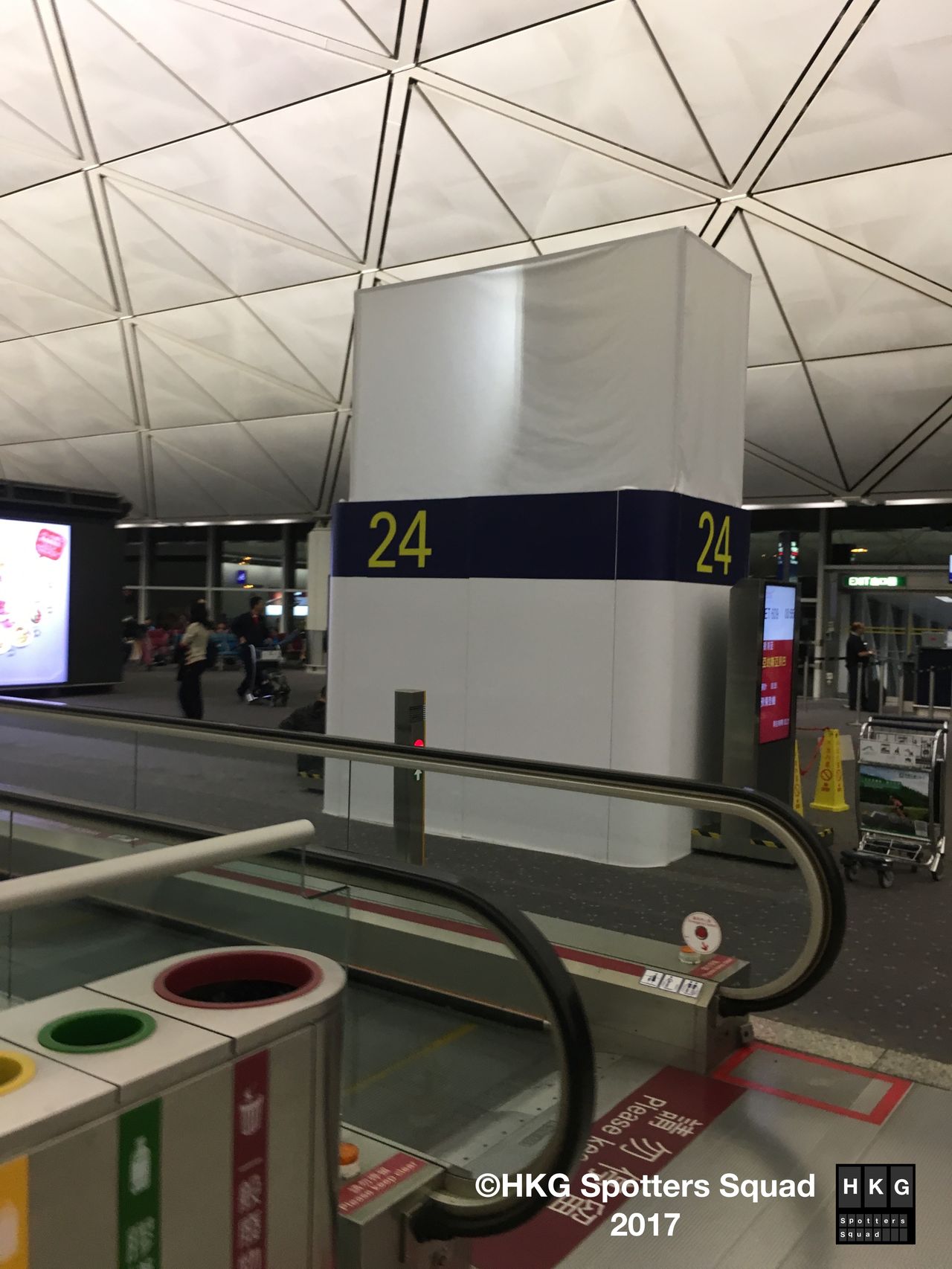 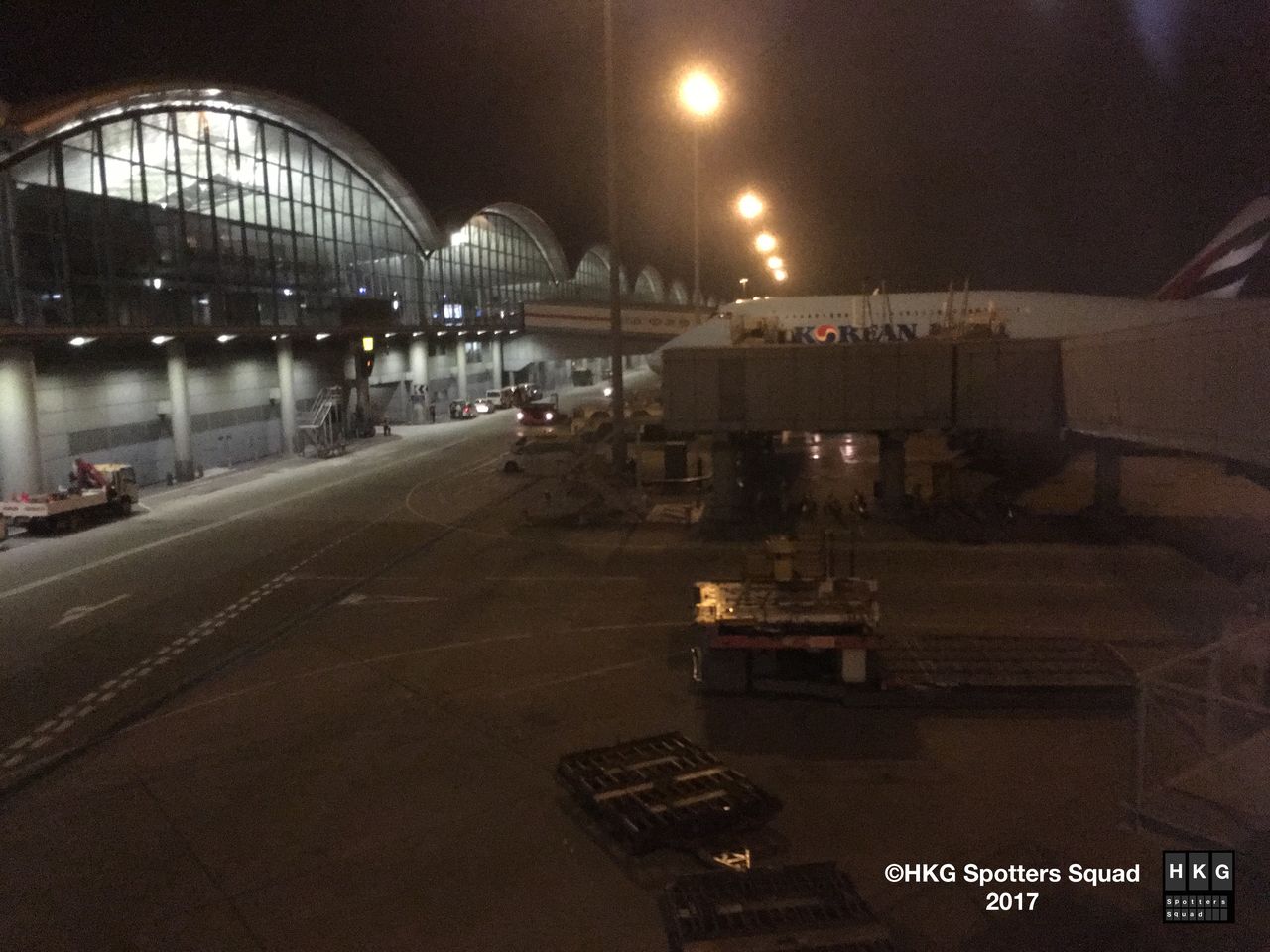 Around 12:30 AM boarding started with First and Prestige class (Korean Air's Business Class) and then later with Economy. As the Gate sits exactly at the Corner of the Terminal building, the walk down the jetway is longer than usual in HKG, but it does provide a nice photo opportunity with the aircraft.


My assigned seat was Seat 31A in the forward Economy cabin which is very convenient as it is not far from the L2 door and the Galleys and Toilets, this however can be bothersome if you are trying to get some sleep, as on a flight with timing like this the frequency of the Cabin crew and other passengers passing can be very irritating. The seat itself is very much like a standard Economy seat and very similar to other airlines. The legroom however is very nice giving around 7-10cm room between your knees and the seat itself. A instantly noticeable difference to other Aircraft is that it has the upgraded interior and Mood lighting which gives the cabin a very modern feel to it. 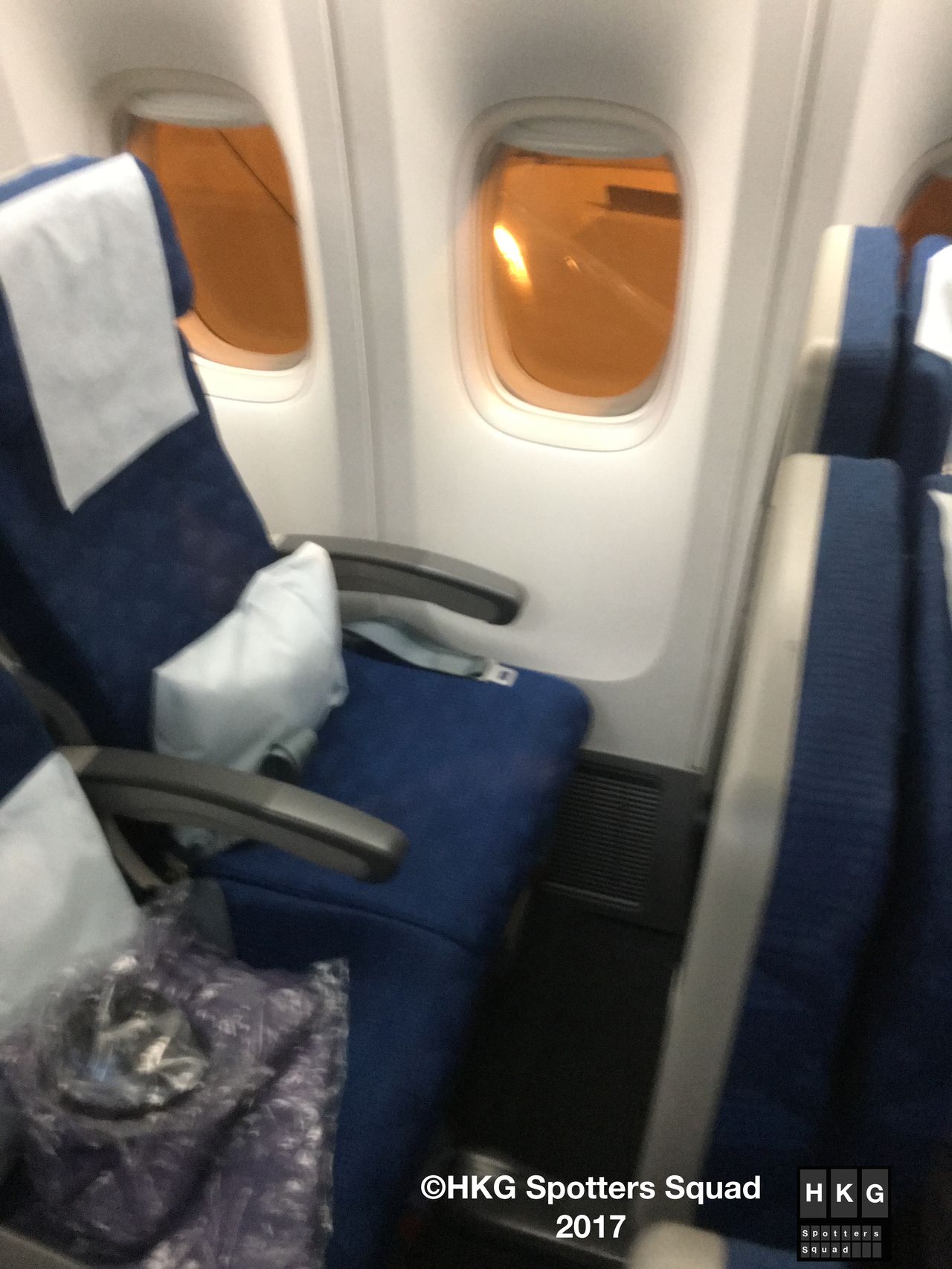 At 12:53 AM Local time, HL7633 was pushed back out of stand 36 and the 4 GEnx engines sprung to life and the aircraft began the long taxi to runway 07R for departure, the taxi itself was uneventful, usual airliner taxi for takeoff and not much to write about here.
Once lined up on Runway 07R, HL7633 accelerated towards V1 and V rotate and then lifted off into the night sky around 1:21AM Local time. The nose and downward facing cameras are excellent for gaining a view of whats happening outside the aircraft. 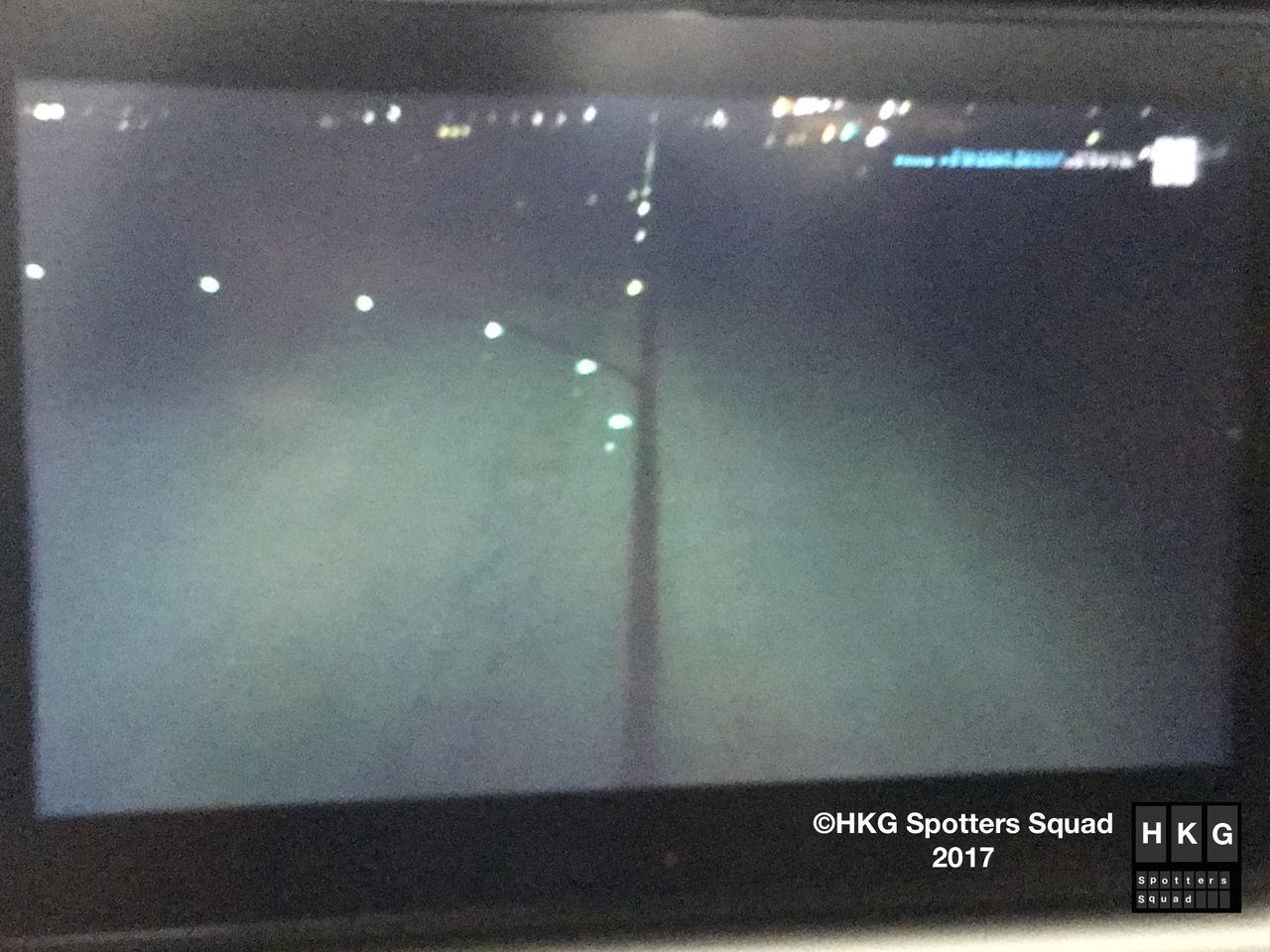 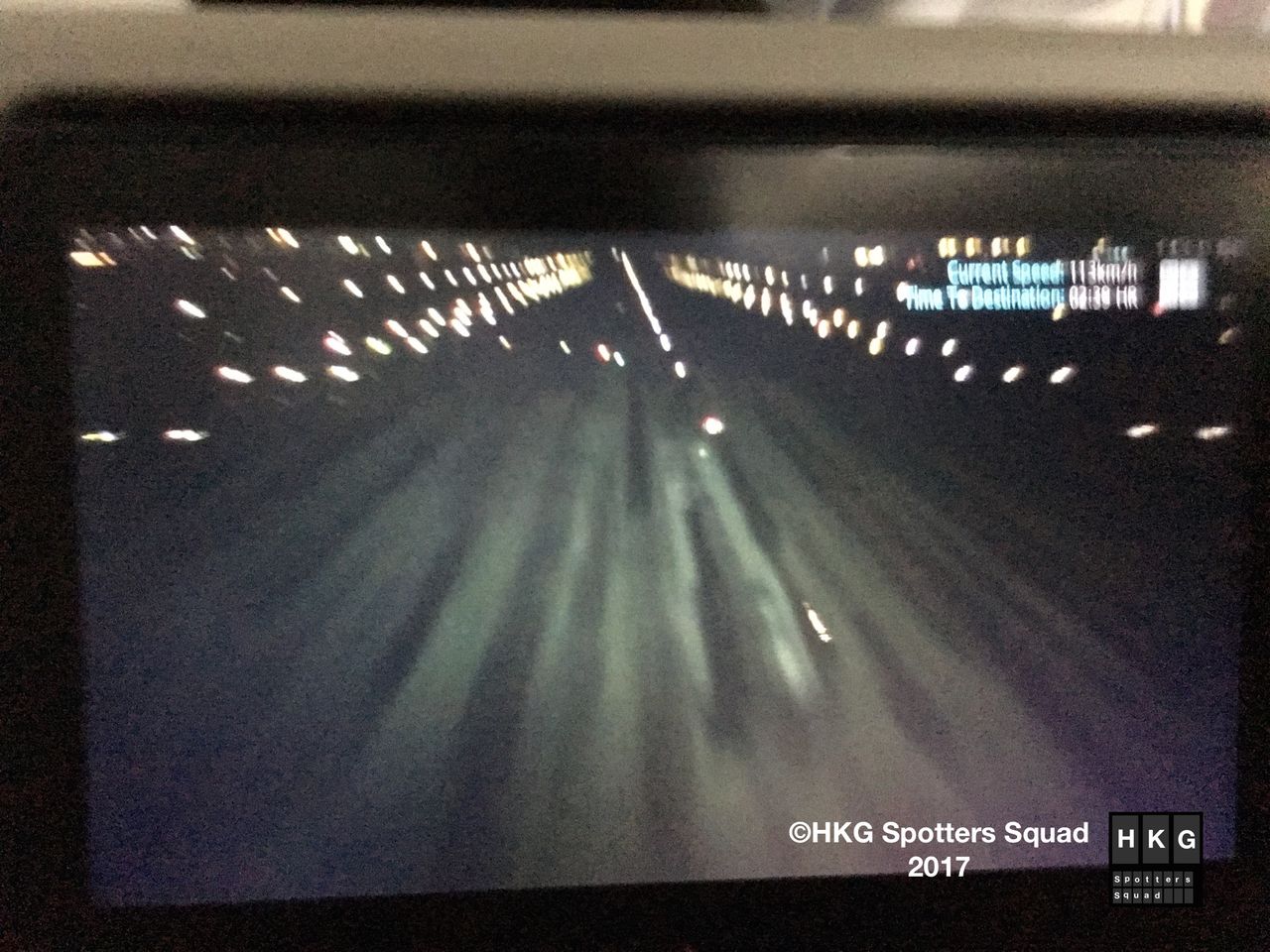 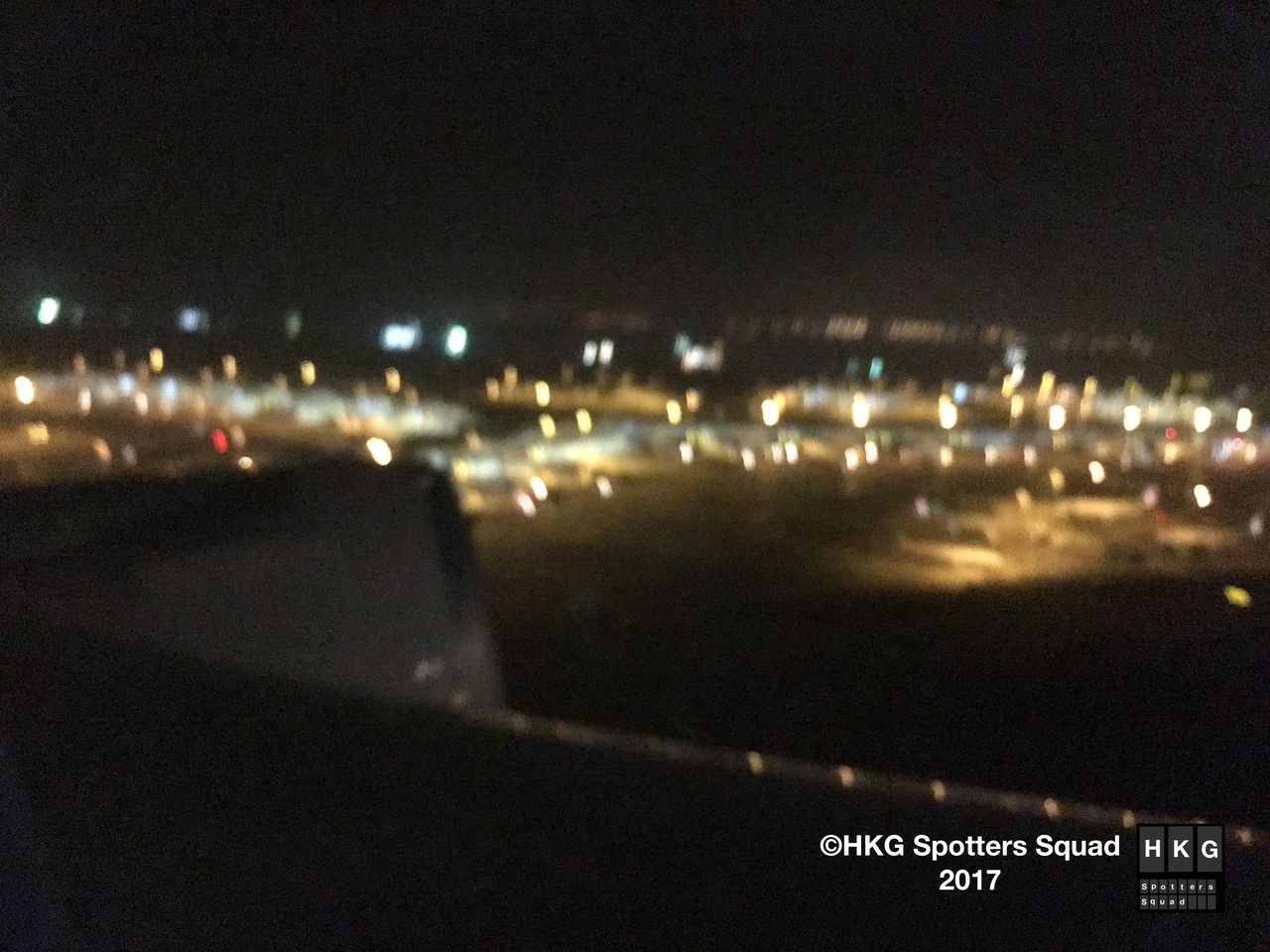 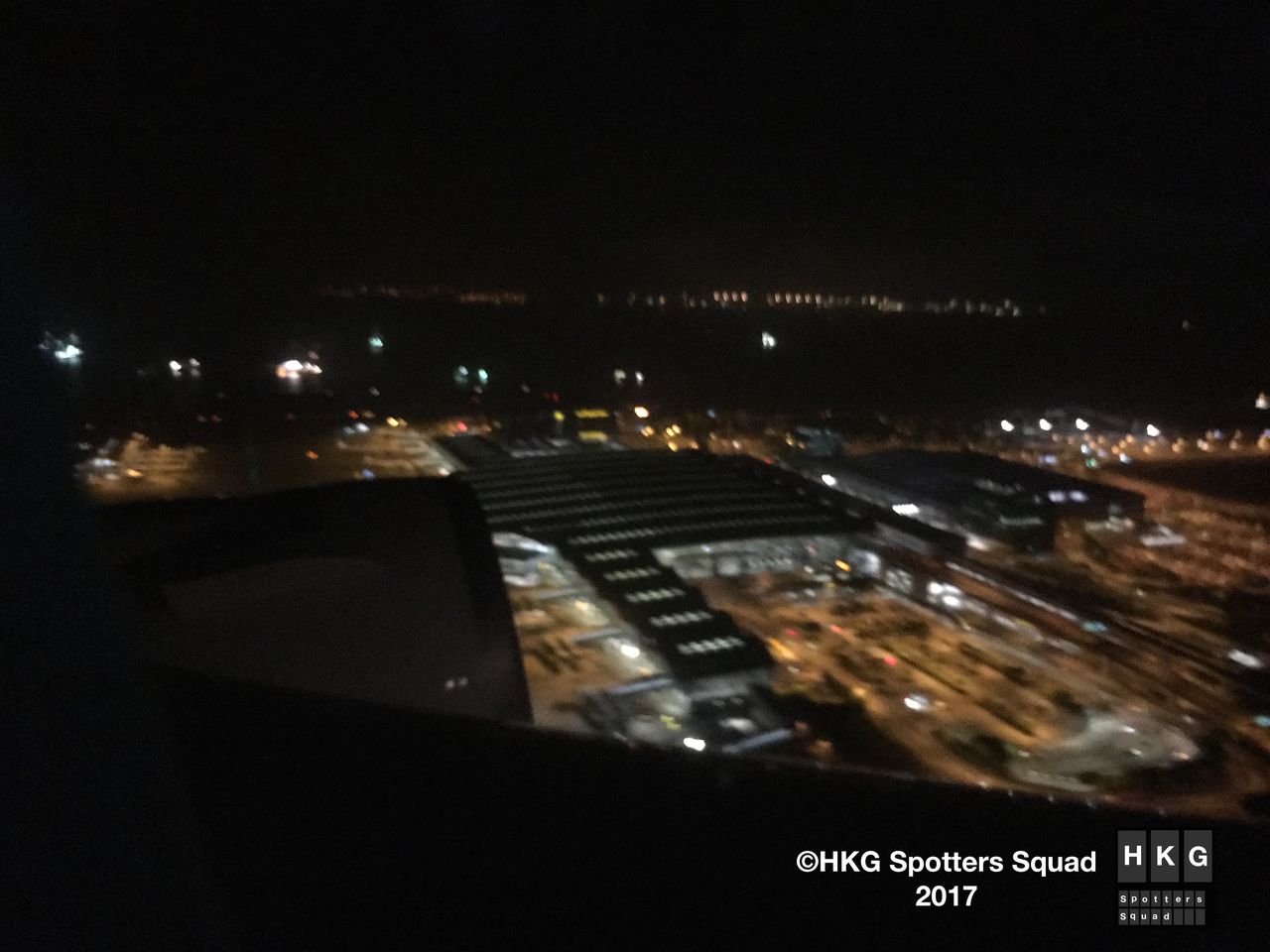 HL7633 then took a right turn towards Lamma Island and then began the ascent towards cruise altitude at FL350, the crew then began preparations for the meal service which consisted of either Korean Bibimbap (A rice dish), or Beef with Potatoes. Korean Air is well known for their Korean meals onboard, so I instantly went for the Bibimbap Option.Laid out on the tray, there was a package of warm rice, a main bowl with various ingredients including: Mince Meat, Mushrooms, sprouts and vegetables. A soup was also served, which however was a soup cube dropped into hot water, which I do find is not as good as fresh soup, but obviously, it is difficult to have fresh soup and even if, it would probably be served in First or Prestige class. The 2 side dishes consisted of pickled Vegetables and a the common airline selection of fruits (in this case Pineapple, Watermelon and Kiwi fruit. Water is served on every tray, from a brand called Jejupurewater which seems to be a Korean water brand. Also on the tray is Korean Pepper paste (Gochujang) which is specially branded and packaged for Korean Air according to their inflight magazine. Next to that there is also Sesame oil, an alcohol towel and cutlery. I also ordered a diet coke from the flight attendant from the drinks selection which is also the average selection which you would find on most carriers. The Bibimbap also comes with a set of Instructions on how to prepare the dish which is basically mixing all the ingredients together, I find this to be very different from your standard Airline meal and it is something that is interesting to experience. You also don't see a actual glass in Economy very often, so I also found this to be a nice little perk of the service. 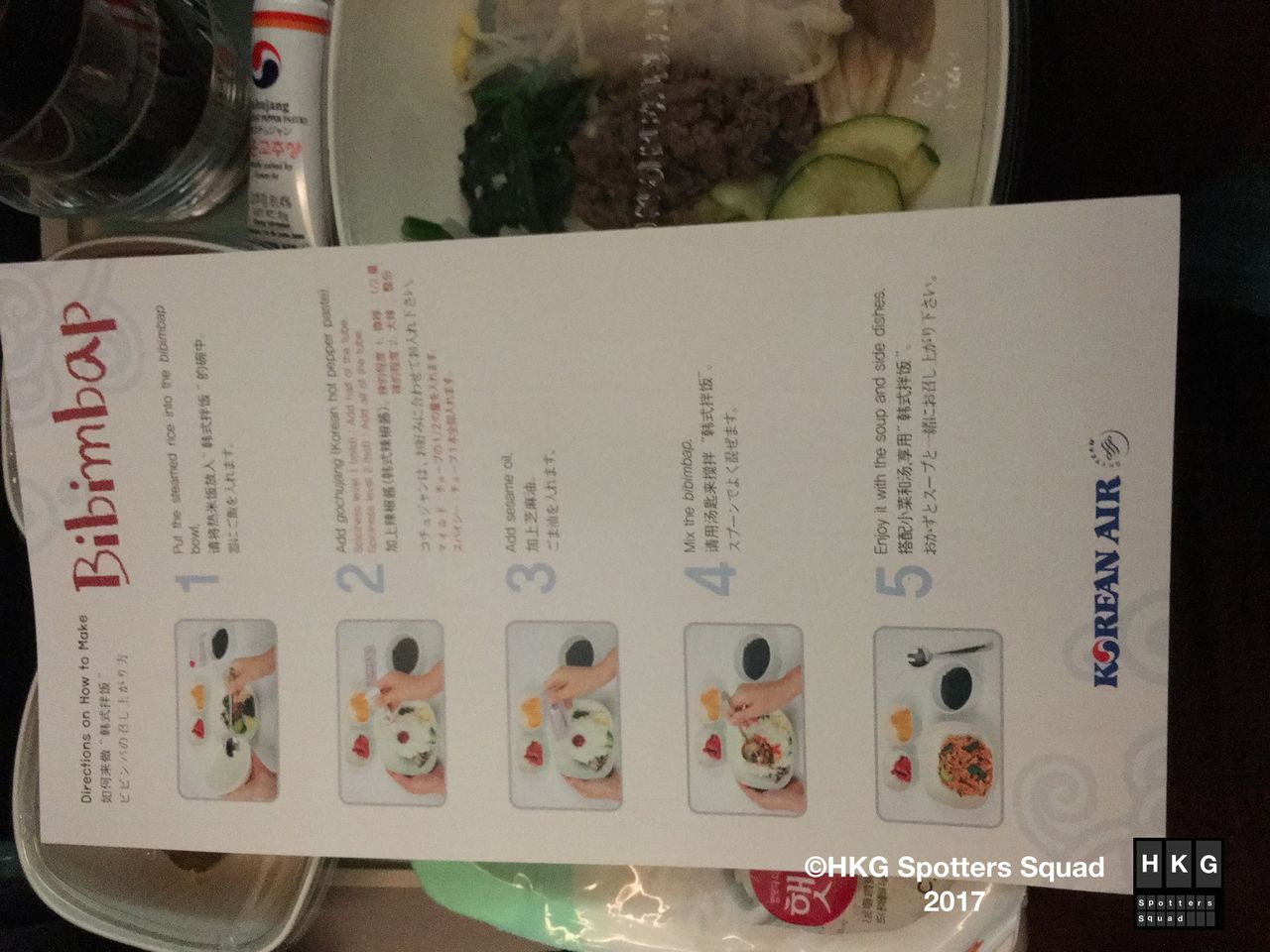 After the meal service was completed the crew came around with the duty free service as we flew past Taiwan. Some turbulence was also to be felt north of Taipei and crew advised passengers to stay in their seats. A downside I found was that the light is not angled at your tray table, but instead directly above your head which can be helpful and/or not depending on your needs. 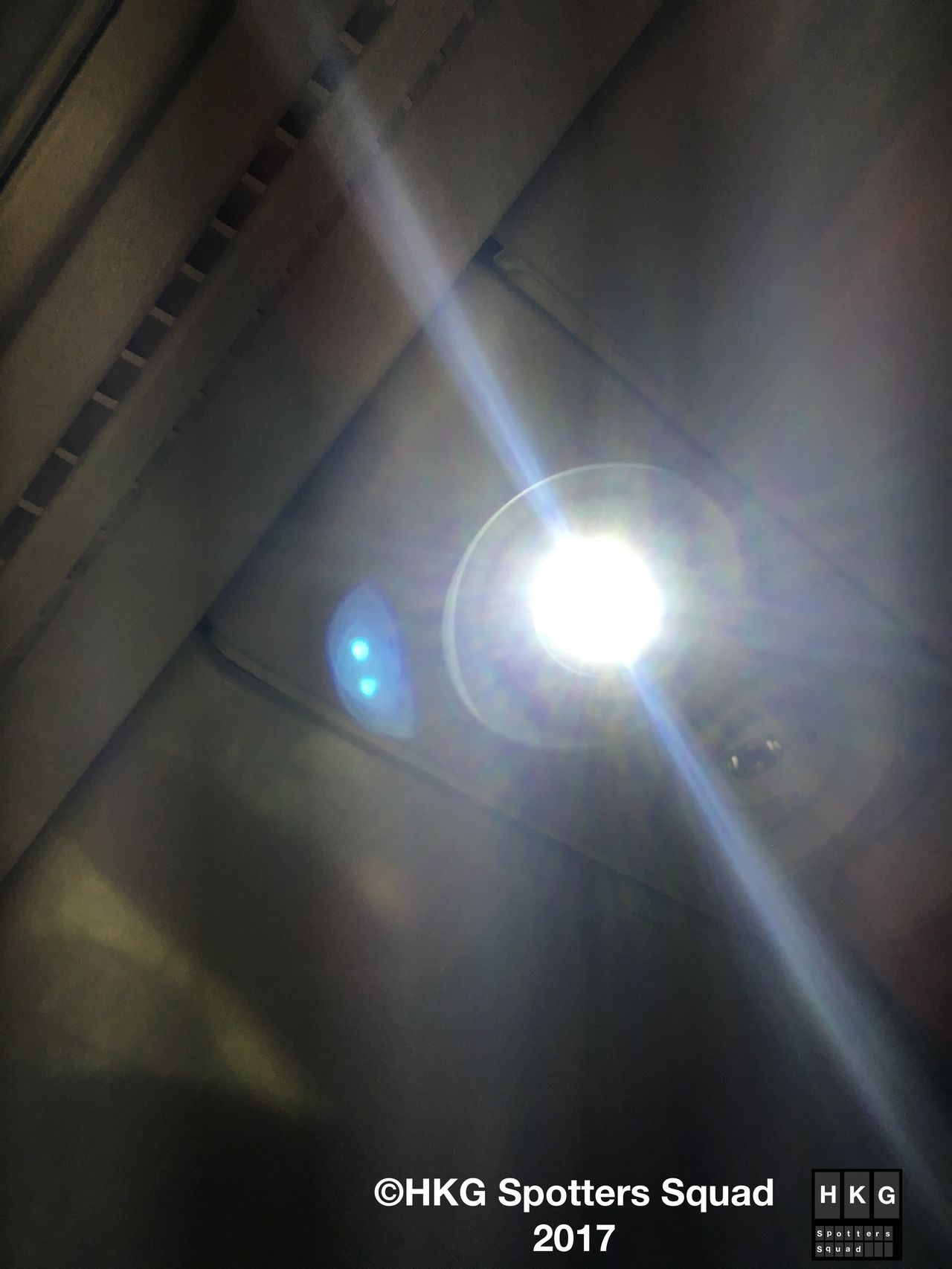 I then had a look at Korean Air's Beyond IFE system which on the B747-8 is very modern and up to date, it has a touchscreen and comes with a remote control, the selection of films is also relatively recent, with films such as Lion and Arrival being available, there is also a pretty much standard selection for Kids, Korean films and asian films are also available. The Airshow is also a newer version than on most older aircraft and is modern which fits in with the Aircraft Type.


The Seat back pocket contents are also pretty standard for any airline with a couple of extra things, the standard safety card, Air sickness bag, inflight entertainment guide (Korean Air's Beyond program), Inflight Shopping guide (Korean Air's Skyshop), inflight magazine (Korean Air's Morning Calm magazine). Korean Air also provides a duty free order form, stickers to indicate to the crew if you would like to woken or not for meal service if you are asleep and something that you don't see often, a Quarantine area map.


I then settled in to watch Lion which I would highly recommend, the IFE also featured many other films with similar release dates, about 53 Minutes out of Seoul, the cabin lights were dimmed and turned off, but not before cycling multiple times through different colours for 10-20 Minutes.


35 Minutes to Seoul, the lights came back on in preparation for landing and a nice feature was that you were allowed to keep your headphones until landing and then put them into the seat back pocket before you leave the aircraft, I find this very nice as it allows you to finish anything you are watching on the IFE. The crew then also announced that the final parking position would be Gate 15, (Stand 15). After the cabin was prepared for landing, HL7633 then flew the approach into ICN/RKSI and touched down on Runway 33L at 5:05 AM Local time, a long taxi then followed to stand 15, also to be seen where various different types of aircraft operated by Korean Air, visible in the distance near the Freighter stands. At 5:14 AM Local time, HL7633 came to a stop at Gate 15 and the engines were shut off and deboarding commenced, interestingly enough, the Jetways did take longer than usual to dock with the aircraft, but eventually I got into the terminal to pass the security check again for the connecting flight to Sapporo, Once in the departures area, I even got the same gate as KE608 for the next flight KE765, this gave great opportunities to photograph HL7633 again. A couple hours later, as the sky began turning light blue, HL7633 was pushed back and towed off. 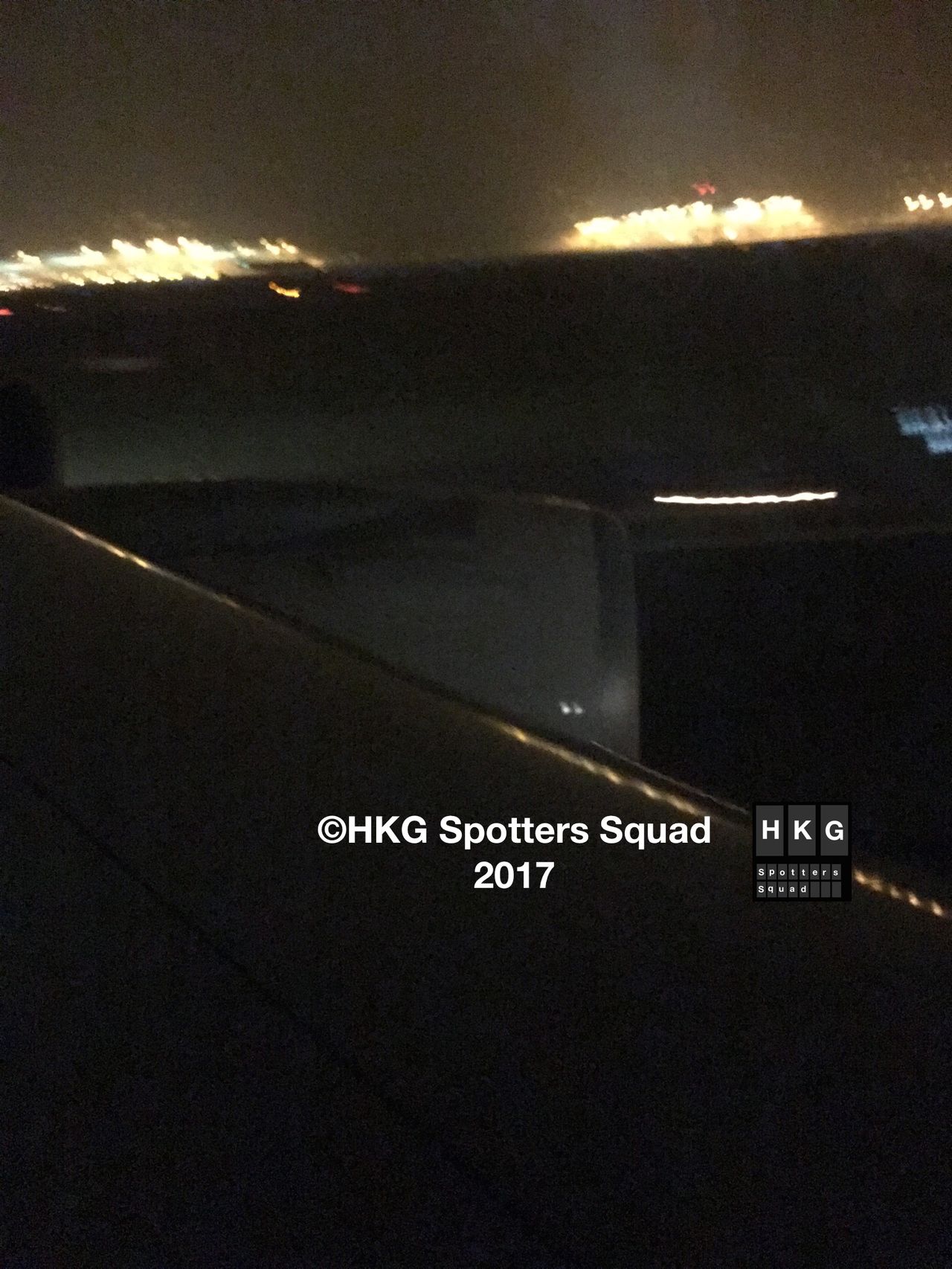 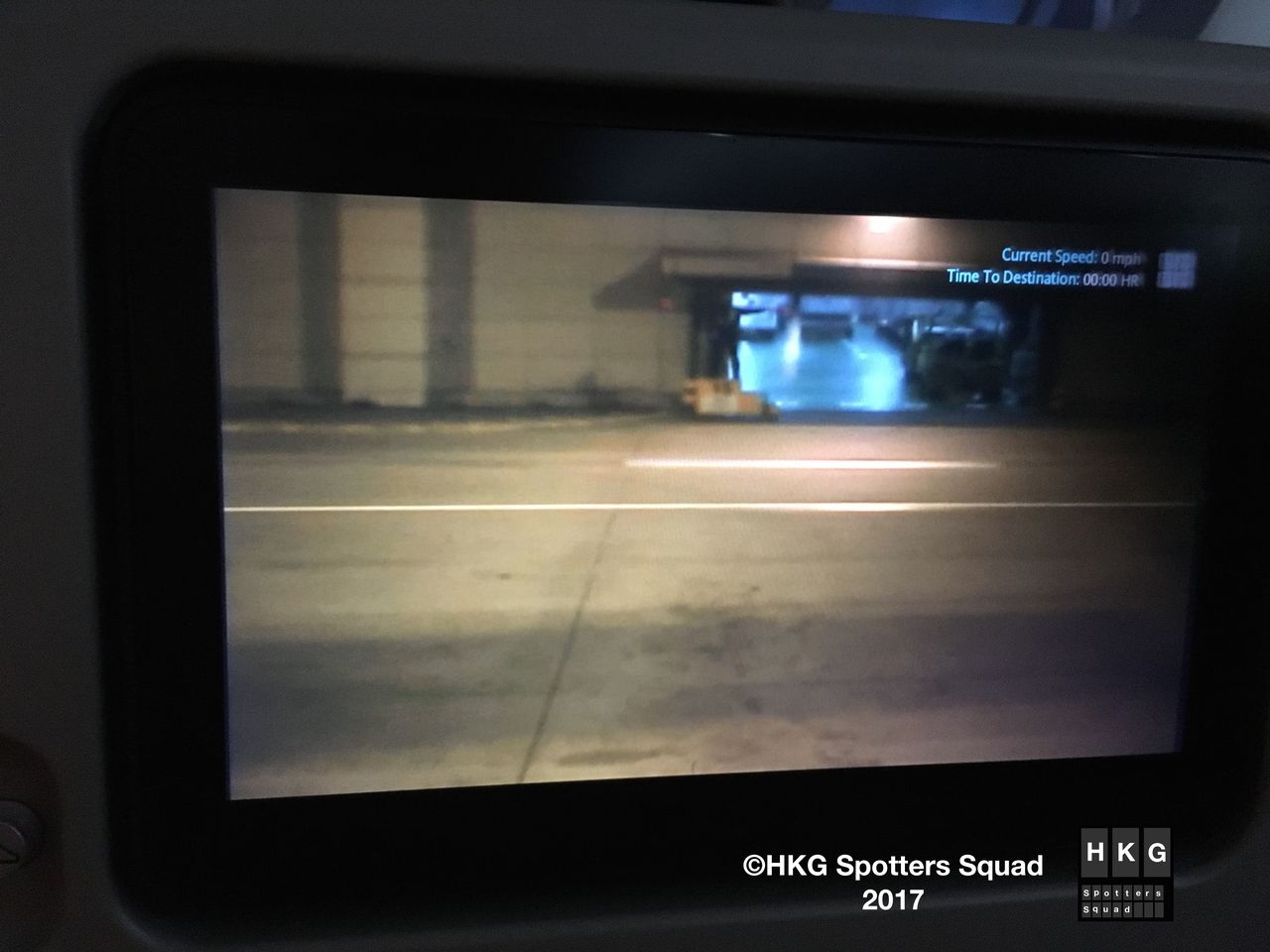 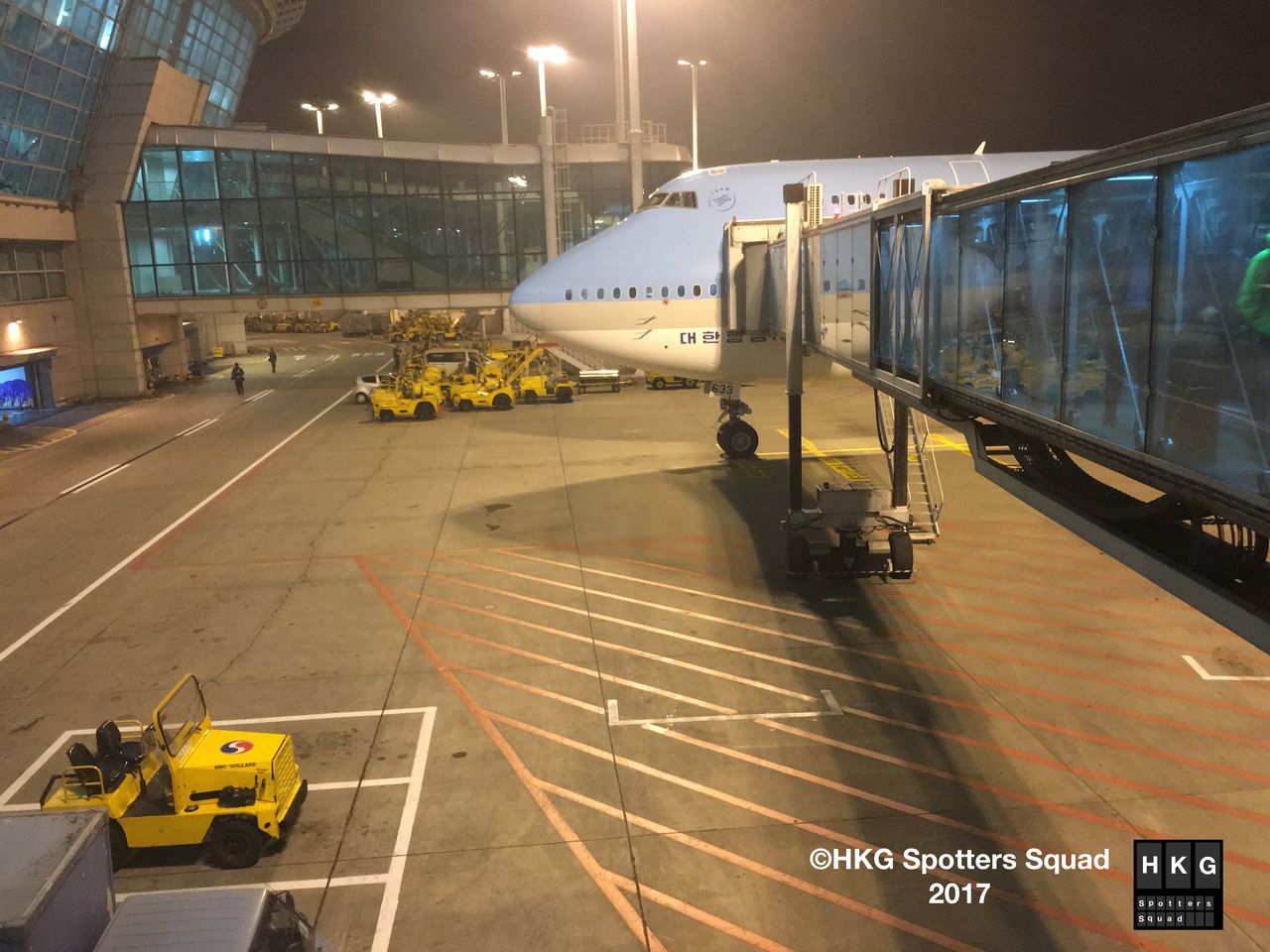 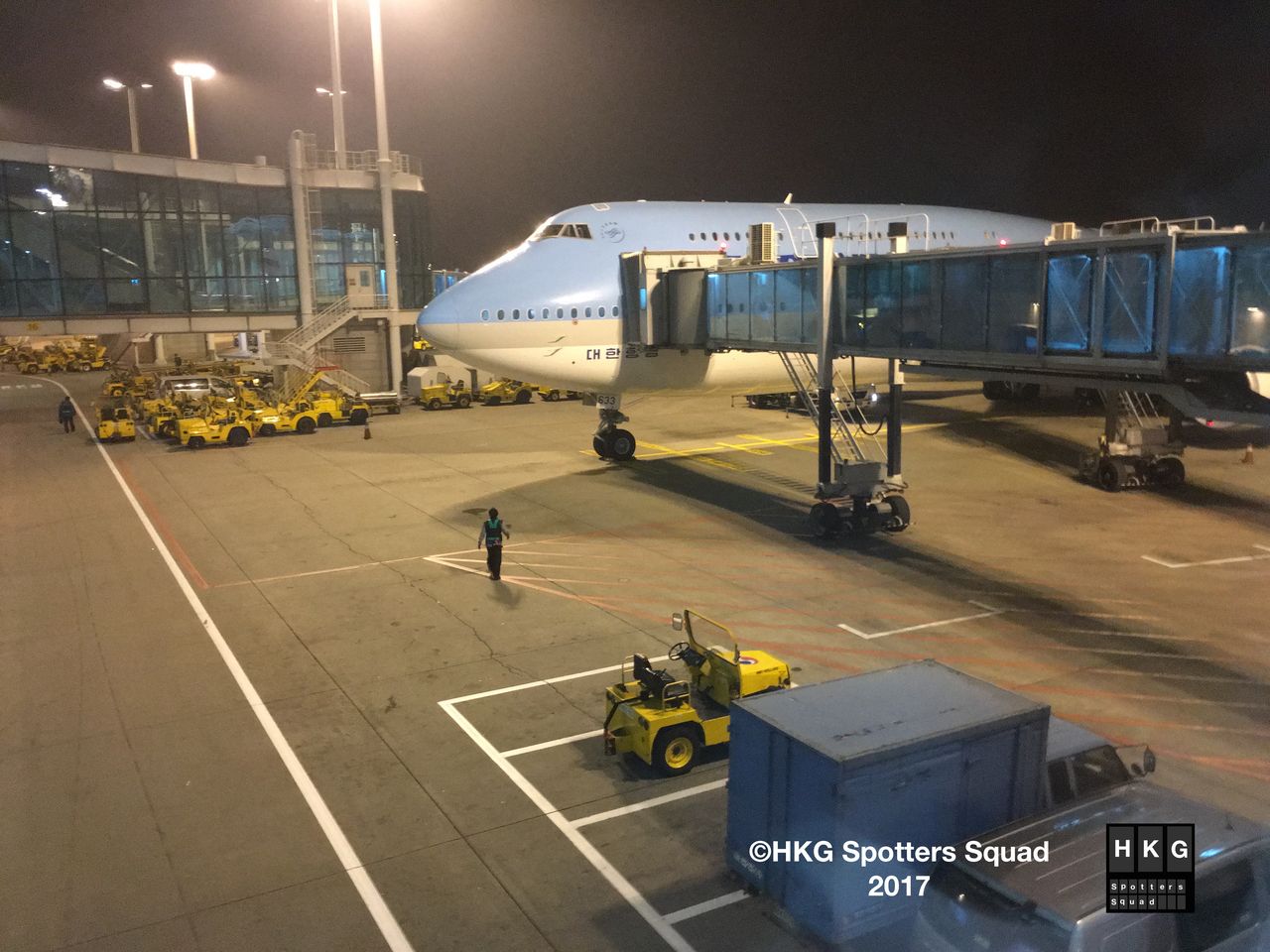 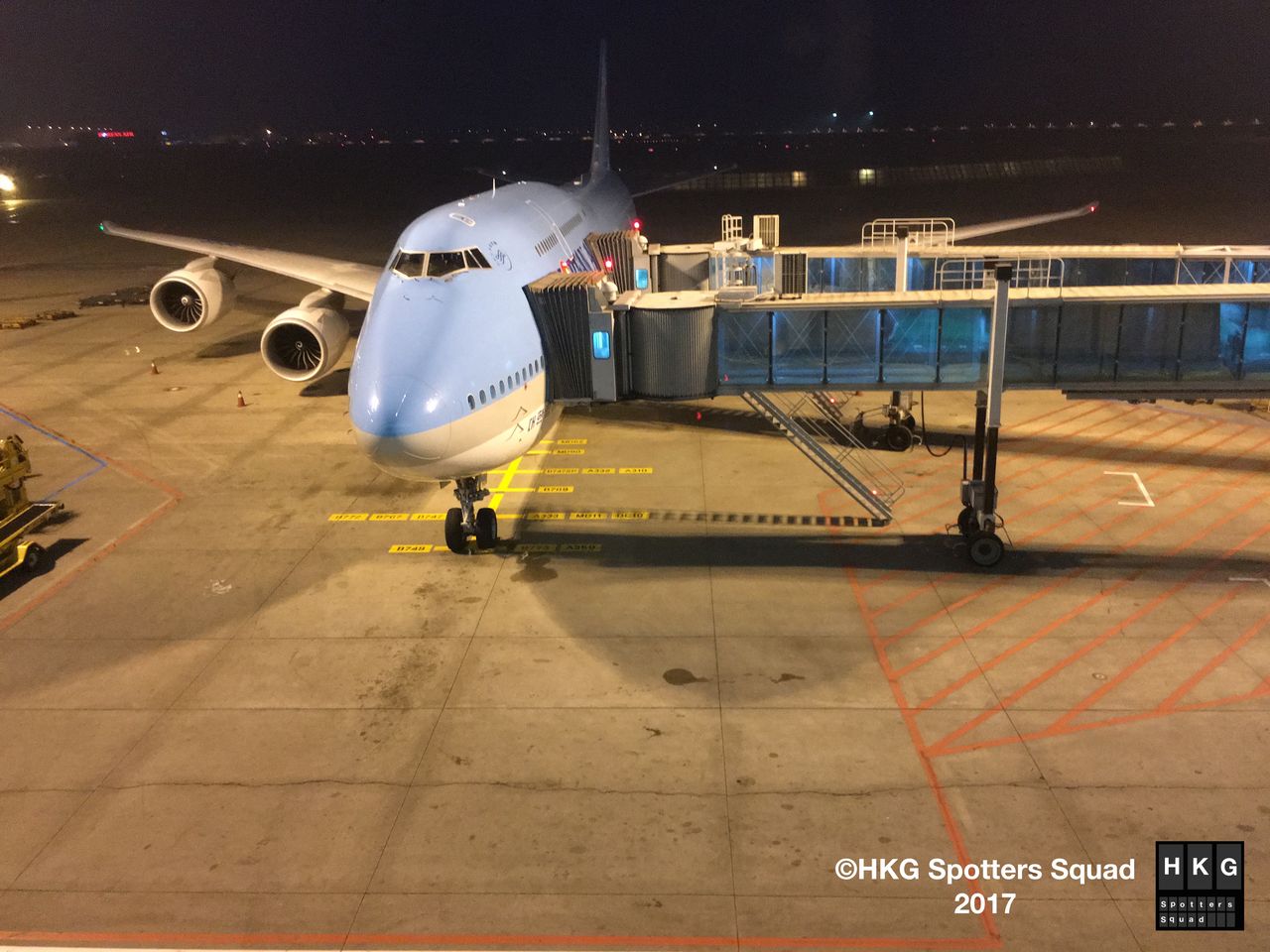 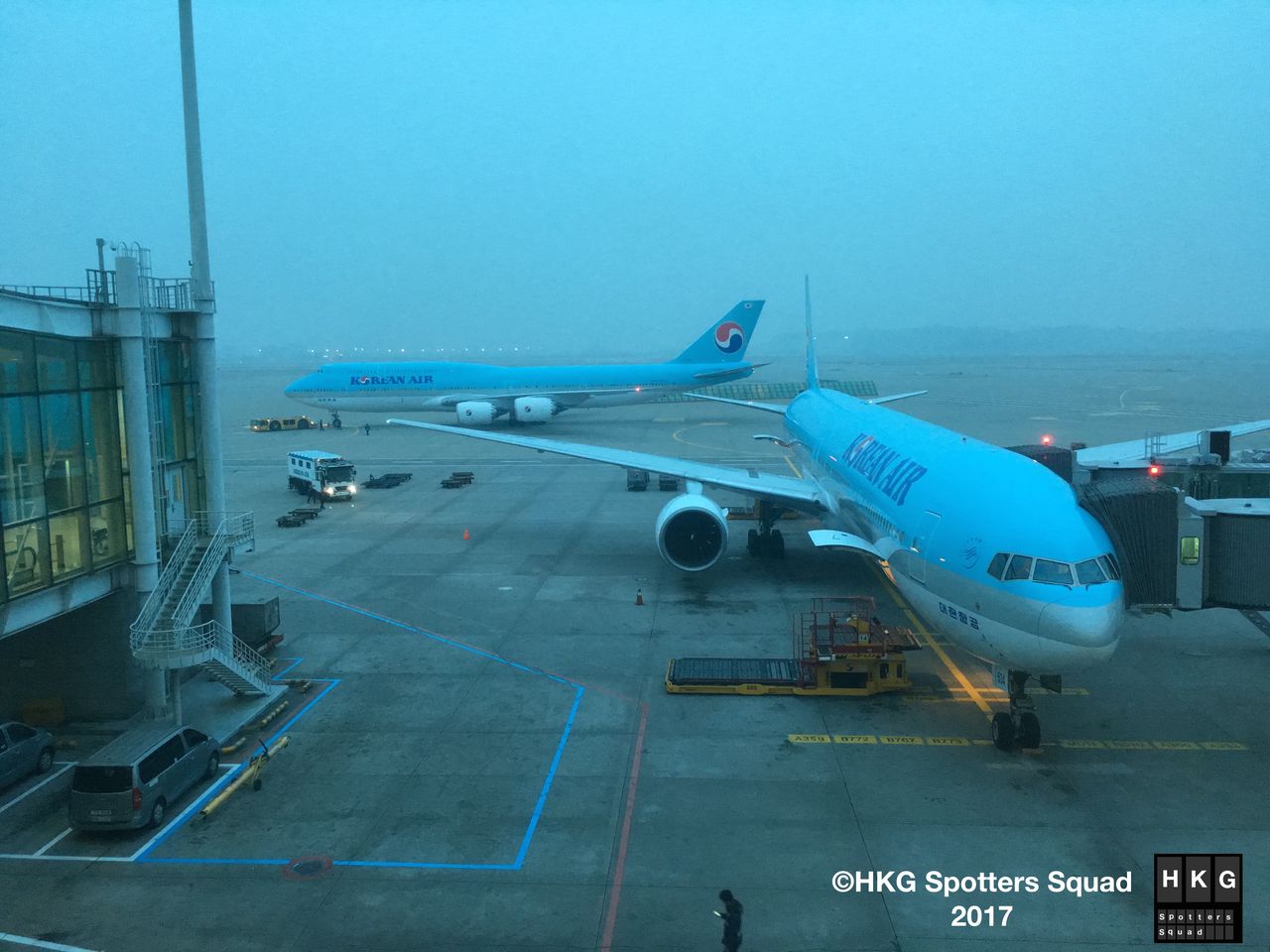 Korean Air provides multiple connections a day from HKG to ICN, but the Early Morning Red eye KE608 service provides a overnight option, as well as opportunities to connect to other destinations from ICN, however the flight can be very tiring. Korean Air's Catering is also pretty good, with the Korean meals giving passengers a taste of Korea as well as a western option as a alternative. I find that Korean Air's B747-8 product is better than most of their fleet, as it is currently the second newest type in the fleet next to the B787-9 Dreamliner. KE608 also provides a very high chance this time of year to fly on the B747-8, as other flights are also operated by B747-8s, But it is common for a large variety of types to fly these other flights meaning that the 747-8 isn't always guaranteed.

The contributors of Flight-Report published 22 reviews of 6 airlines on the route Hong Kong (HKG) → Seoul (ICN).

The average flight time is 3 hours and 14 minutes.