By bldavid GOLD 12315
Published on 5th June 2017
Kuala Lumpur International Airport (KLIA) is a really nice one: modern and spacious.

British Airways' check-in areas is on the left end as you enter the building, and it was not crowded. I was booked on Premium Economy (World Traveller Plus) on this flight but I asked about the possibility of buying an upgrade. It was indeed possible, and while it was very expensive, I choose to go for it for two reasons: this was a very long (13 hours) flight and I've never tried British Airways' Business Class (Club World) before.

I was through security and immigration in a few minutes. BA doesn't have a lounge at KLIA but uses Malaysia Airlines' Golden Lounge. What a disappointment! The lounge is huge but it's full of old furniture and the toilets look like in a cheap 3-star hotel. There was a small choice of hot food but only low-quality drinks are on offer. Staff were either invisible or had no interaction with the guests. If you want alcohol, you can go to the bar which can be found separately near the entrance (see the last photo). 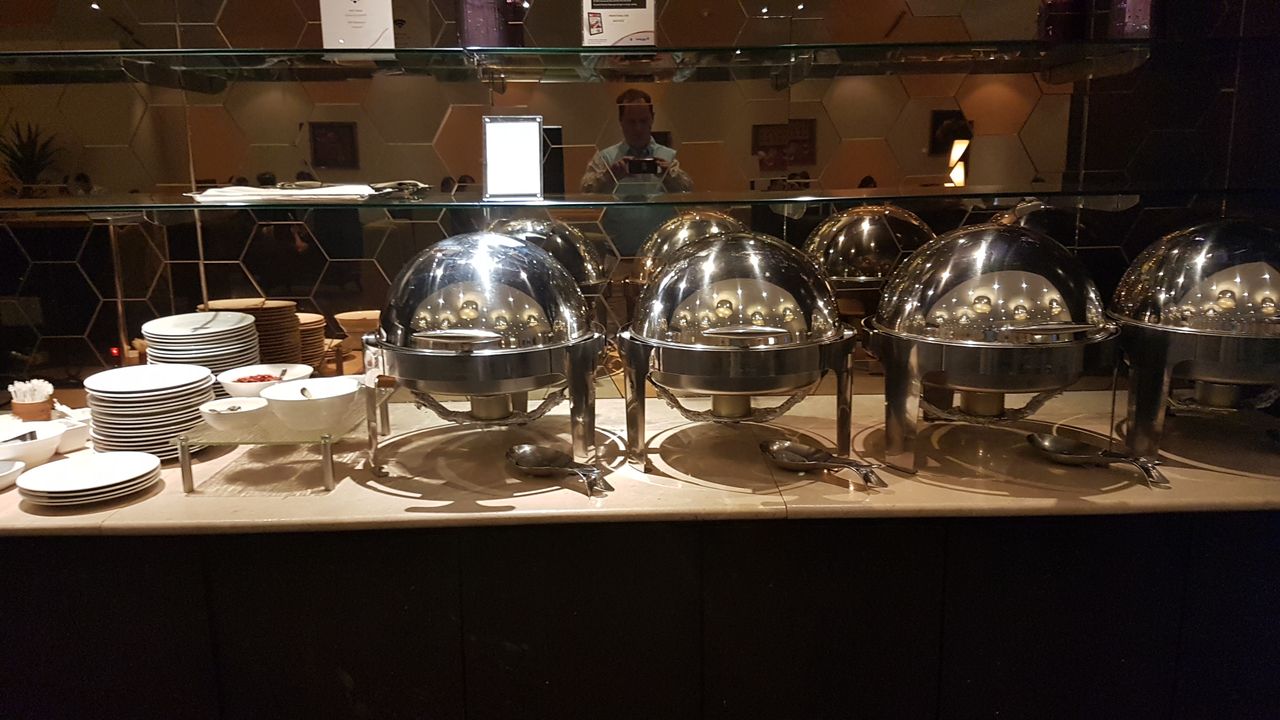 I didn't stay long in the lounge, and I got to the gate just a few minutes before boarding started. Priorities were followed. I was welcomed by the cabin crew when I got to the plane and shown to my seat.

The plane was the same B787-900 Dreamliner in a perfect condition that I took a few days earlier from London to Kuala Lumpur (see my previous flight report). As many of you know, British Airways has a unique 2-3-2 configuration in business class where the window seats and the middle seats are rear facing. My seat was a window seat.

First, the fact that my seat was rear facing was not a problem at all. The seat actually offered good privacy with plenty of legroom and the seat became a full-flat bed. There was also a useful mobile charger at my seat.

On the other hand, while there was a divider between the seats, I had to face a complete stranger during take-off and landing, the crew had to lower the divider every time I was served (to the greatest unhappiness of the passenger seated next to me) and I had to climb over the feet of another stranger when I needed to leave my seat.

Water or orange juice were offered during boarding. Headphones of medium quality were waiting on the seat, and also an amenity kit and the menu.

I was probably very happy to be in business as one of the cabin crew told me when distributing the hot towels: "Oh, you're smiling! A good traveller".

Boarding was quickly completed. Push-back was at 23.06 for a scheduled time of departure at 23.10. Take-off was at 23.20 and seatbelt signs were off at 23.30. A small bottle of water was distributed shortly. Orders were taken for the aperitif, the starter and the main course at 23.42. Aperitif (a very good kir royal for me) and packaged cashew nuts were distributed at 23.55.

Starters were brought at 00.17 and drinks were offered. The New Zealand Sauvignon Blanc was fruity and light. The salmon tartar was really nice. The salad was nothing special. Strangely enough a small Lindor chocolate was offered with the starter.

My first choice of tuna as a main course was not available. My second choice was beef which was served at 00.40. The meat was simply not good but just edible with the sauce. The vegetables (potato, green beans and carrots) were OK. No additional drinks were offered with the main course but were served on request.

The dessert was really good.

Meal service done by 1.20, so two hours after take-off - very good. Most of the cabin crew were friendly and efficient throughout the flight, although service was no way personalised.

I found flat-bad seat quite if not perfectly comfortable. I slept first for three and a half hours after dinner when we were already around Muscat.

In-flight entertainment: as I wrote in my previous review I like a lot of different bands and singers, many of whom are from the UK but I couldn't find anything I liked. The choice of movies was considerably better but still not big enough. But what I loved absolutely were the old aviation videos.

Only cold breakfast was first served 1.30 before arrival, than hot breakfast only about 20 minutes later. The fruit smoothie and the muesli shown on the menu were simply missing, and the cheese omelette was so bad I had a diarrhoea immediately after landing.

The weakest points were the main course for dinner, breakfast and the choice of music. Service was efficient. The seat/bed was reasonably comfortable. The best parts were the starter and the dessert at dinner, the aviation videos, and also legroom and the excellent condition of the cabin.

The contributors of Flight-Report published 8 reviews of 2 airlines on the route Kuala Lumpur (KUL) → London (LHR).

The average flight time is 13 hours and 33 minutes.