By AFGK1 1084
Published on 14th July 2017
Hi everyone ad welcome to my report on my recent flight with Philippine Airlines. I apologize for the lack of pictures and I hope you will enjoy reading this report. It really took me a lot of time to write this because I still have other stuff to juggle.

Anyways, without further ado, here is the flight itinerary:

Before I start I'd like to give a small tourist bonus which shows some of the places we visited in Manila.

Microtel Mall of Asia is the hotel where we stayed during our trip. Microtel is an international hotel chain with hundreds of hotels across the world including thirteen hotels across the country. If I'm not mistaken, this is the largest Microtel in the Philippines (And the only high-rise Microtel here, I believe; Most of the other Microtels here only have two to three floors). It may not be the most posh hotel here but it is actually worth the price of Php 5000 or $100.

The room looks new despite it being here for seven years now. The beds are soft and the layout is convenient- plus, there's a daybed.

And there's a nice view of Manila Bay from the window. There is also a hot/cold shower, a television with about ninety channels and a chiropractice bed.

We went to Taguig, a commercial district about thirty minutes away from our hotel with traffic.

We also visited a mall with a Venetian theme, complete with a river with gondolas.

Here is SM Mall of Asia which is a stone's throw away from our Hotel. It's basically one of the largest malls in the Philippines, which is expected because well 1.) The company that's operating it is SM and 2.) It's the Philippines, a country famous with large malls and so you could find a mall for every kilometer in Manila. Malls that have areas less than 150,000 square meters are considered small here actually.

A glimpse of the mall. The mall was also decked with Philippine flags as we near the 119th celebration of Philippine Independence.

Manila was a very nice city to visit for a while but it's time to go home after five days and four nights. We rode a taxi to NAIA 2 (We booked a ride through an app called GrabTaxi as there are some taxis in Manila that could scam passengers and there are taxis that snob several passengers so be careful whenever you go here.). We went through the Skyway so there's no traffic.

The control tower is visible from here.

They used a lot of quotation marks here. It almost made me doubt if the use of pushcarts is "free", haha.

I got kind of nervous at check-in as this is actually my first flight in Business Class and the nervousness was even felt by the staff. I was then handed my boarding pass.

I then proceeded to the lounge (I apologize for the lack of pictures, I got a couple pictures from the internet though). Here's the entrance (credits to www.mangotours.com).

As I got a bit nervous I forgot to take a picture and so I borrowed this from the Philippine Flight Network's website. The spread is OK: It's not The Private Room or The Pier but it's not a stingy lounge like those at SKYTeam's lounges as well, besides it's just a domestic lounge. 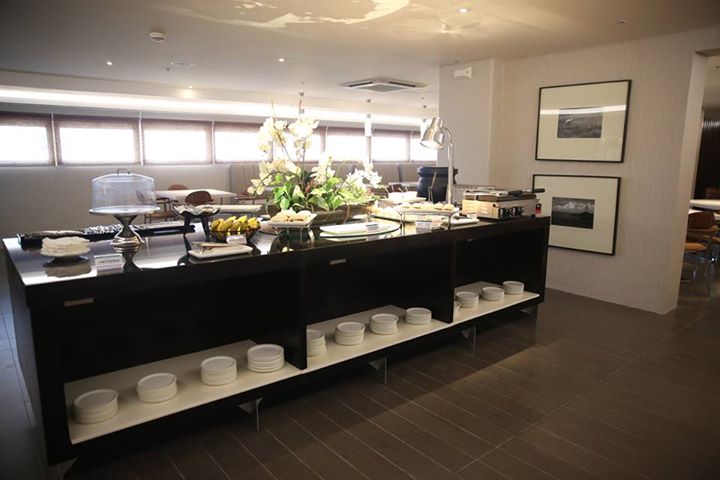 For my first round, I got a banana and a panini sandwich (They have a panini press so you could heat it anytime you want. I also got a bowl of Arroz Caldo which is the signature dish of any PAL Lounge (You should never miss this whenever you go inside their lounge). And the rest of the pictures are mine now (I told you I only got two pictures) XD. There is also a chiller for drinks together with fruit juices and a coffee makers (I was puzzled that they stock Coke products instead of Virgin Cola products now; It was quite a bummer since I never drank those since like first grade (It's hard to find Virgin coke products here)).

It's time for me to explore the bathroom. They have a lot of pictures showing the wonders of the Philippines around the lounge. I was actually glad that they kept those pictures even after the lounge was renovated.

They stock the necessities here, including mouthwash :O .

This is where I sat as the lounge was packed with people from different flights. The television showed news about the Resorts World shootings which happened the same day we left Manila. I won't talk about it in detail but here's a news article about it: http://www.bbc.com/news/world-asia-40123389 .

I left the lounge because I thought that our flight was going to depart. Actually, it was the flight before me which was PR2823. I guess I must have paid more attention to numbers. Anyways, here's the rest of the airport.

Our plane arrived on schedule, but boarding was delayed due to servicing.

Here's our gate. There was actually a couple of instances where we lined up although there was no official announcement. I guess it's our habit to line up very early for everything (From concert tickets to the metro).

When I boarded the plane, I was greeted by the purser and took my seat at the back. The FAs were puzzled to see a young guy seated in Business class (The fact that I look younger than my age doesn't help either).

The legroom is ok for this flight. I mean like it's miles away from economy, but I have to take in note that it's business class.

PR flies the MNL-DVO-MNL route seven times daily. Six of those flights are operated with an A321 while one flight is operated with an all-economy A330 which I reviewed in my last report. Because these aircraft were bought when SMC owned the company for a few years (2012-2014 I think) (until the previous management bought PAL again.), the aircraft they bought were basic looking. As a result, there's no IFE in all classes, including J. I even think that the old A320s were better than the new aircraft. The seat also does not have a calf/leg/foot rest although there's a small table to place your drink. Nevertheless, the seats are comfortable.

An FA then distributed PDBs and hot oshiboris. The PDB was a choice of four seasons or mango juice. I chose the latter. Of course, there's no champagne given that this is a domestic flight and I'm too young to drink anyways. Nevertheless, I was surprised that PR offers a pre-departure drink and an oshibori in business class.

Anyways, the FAs were really friendly and hospitable. It's just that they seem annoyed with a teen in business class but I guess that's a sentiment that is felt by a lot of FAs. They probably thought that I was a lost boy in economy.

Take-off was uneventful and about thirty minutes later. The FA approached me that the meal for tonight would be Chicken Satay with Char Tuay Keow but later changed it to Baked Ziti with Fish Patties. The FA assumed that I'm not Filipino because I responded meekly (I'm an introvert, for your information). The meal was then brought out a few minutes later. Usually, there are two choices for business class but I think there's only one choice for this flight because it's a night flight. The FA also took my drink option (Don't be fooled, the choices were the same as the PDB). I heard that softdrinks are offered on day flights. I had my fix of softdrinks at the lounge, so it's no big deal to me. Besides, the choices in Y are just coffee, tea or water so I shouldn't complain. Y+ pax were also offered the same drinks in J although the drinks are served in plastic cups. Anyways, I was puzzled that the Y+ pax were served first with their hot sandwiches. Probably, it would take them more time to heat the meals.

The table was then set. I actually had a hard time opening the tray table but then I figured it out a bit later. The plating is well, ok. The ziti was good but the fish cakes were very dry, although it was expected because everyone knows how fish would turn out in the air. I would have liked the previous option that was told to me a while ago but I was fine with this.

Also, the fruits were fresh (Especially the mango). A cup of yogurt was also offered. PAL could have came up with a salad or a starter although the current meal is very good already considering that all they offered in the past was a hot sandwich. Even the Y+ meal is slightly better than the 2010-era J offering as a sandwich is offered.

I was puzzled by the double cutlery though. I know fine dining etiquette but the two sets of utensils are identical in size. O.o

Also, there's a chocolate calamansi coin. Calamansi is a citrus in the Philippines which looks like a very small lime. Usually, they offer the chocolate mangos but my luck wasn't that good for that flight.

The rest of the flight was uneventful except for the purser asking me if there's anything I needed.

At this point, my camera died so I could not take pics of DVO. I took this pic of the baggage carousel last year (I didn't post the FR for that flight but in case that you're wondering it was from SIN to DVO. I might post the report if I'm not busy.

Anyways, here's the arrivals area. It seems tidy and unpacked as it was a night flight.

I then took a 30 minute taxi ride home, and that's the end of my first FR in J class. I hope you enjoyed it and I hope to post more reports soon!
See more

My first J flight onboard PAL was a good experience. I will break down my experience below:
NAIA 2: The terminal is pretty basic but efficient. There are a fair amount of food outlets at the terminal.
Mabuhay Lounge: Pretty efficient and neat. There aren't a lot of seating areas left when I entered during the peak hour though. There's wifi and a TV room to keep you entertained and the catering consists of fresh sandwiches, cookies and of course, the famous arroz caldo.
Cabin: Very clean and spacious.
Catering: Except for the dry fish patties, the meal was good. There's a yogurt and a fruit bowl along with the meal. I also think that the calamansi coin was a nice touch.
Entertainment: I have nothing to say here.
Crew: They seem friendly although it seems that they're annoyed.

If you were to ask me if it's really worth it, then no doubt I would say yes. I'd actually fly with J again if I have the miles hopefully.

He wrote 6 reviews about 3 airlines and 4 airports.