#48 out of 80 Airlines A minimum of 10 flight-reports within the past two years is required to appear in the rankings. 131 reviews

By hometoyyz BRONZE 938
Published on 31st July 2017
Hello, and welcome to another quick trip to Asia with your humble flight-reporter. This time, I’m off to Beijing in Delta One. This trip was inspired by a very low YYZ-PEK business class fare that Delta offered for much of the first six months of this year. As it happens, this is a week before my birthday, so happy (early) birthday to me.

As a reminder, here’s the rundown of our agenda: 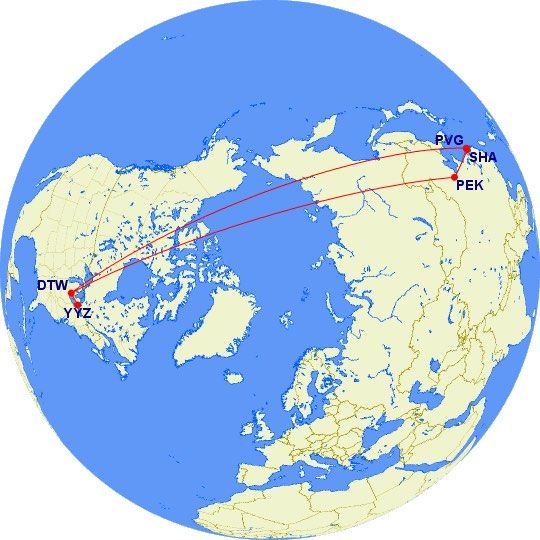 When last we saw each other, I had just arrived into DTW from PEK a couple of hours late, with some debate as to whether I’d make my connecting flight home to YYZ, or be stuck in DTW overnight.

Because of the way Flight-Report works, the answer by now is pretty obvious to you.

So, if you just joined us on this page to find out if I made the flight, the short answer is “Yes.”

If that’s all you want, we’re all done here. Hopefully I’ll see you on my next flights. Cheers!

Looking for a little more detail? Okay, let’s do this thing.

By the time the door was open and I was starting my way towards customers, we were at about 36 minutes to scheduled boarding for my flight to Toronto. As expected, this is going to be tight.

Thanks to the Global Entry granted me by my Nexus membership, I was through customs very quickly — although at the time we arrived, there didn’t seem to be many international arrivals into DTW. I probably would have been through pretty quickly anyway. The only brief hiccup was that the agent inspecting my GE machine receipt seemed to want details on what I was doing in China. For some reason “I just decided to fly across the Pacific and back because reasons” didn’t cut it for her.

There’s transit security off the side of the baggage hall, but it lacks Global Entry, and the lineup was long. So I decided to exit the baggage hall, and head upstairs to the normal check-ins. But I guess I took the wrong escalator, and ended up at a security check point on a floor between Arrivals and Departures. There was also no Global Entry here. But there was no line, either. So after weighing my options for a second or two, I decided to just submit to the “regular” security line, since there was no wait, and the agents seemed quite friendly. My first trip through the Nude-o-Vision in years, aside from a few SSSS experiences. Of course, my bag, which is chalk-full of electronics goodies, aroused suspicions, and various parts of it needed to be checked again. The bag ended up going through three times, in total. Take your time, it’s not like I’ve got a flight to catch. Eventually, I was cleared, and away I went.

Naturally, this would be the one time in recent history my flight to Toronto is departing from the satellite terminal, meaning it’s going to be a bit of a hike. On the downside, it kills time that is running short. On the upside, the tunnel is always pretty cool visually and sonically. 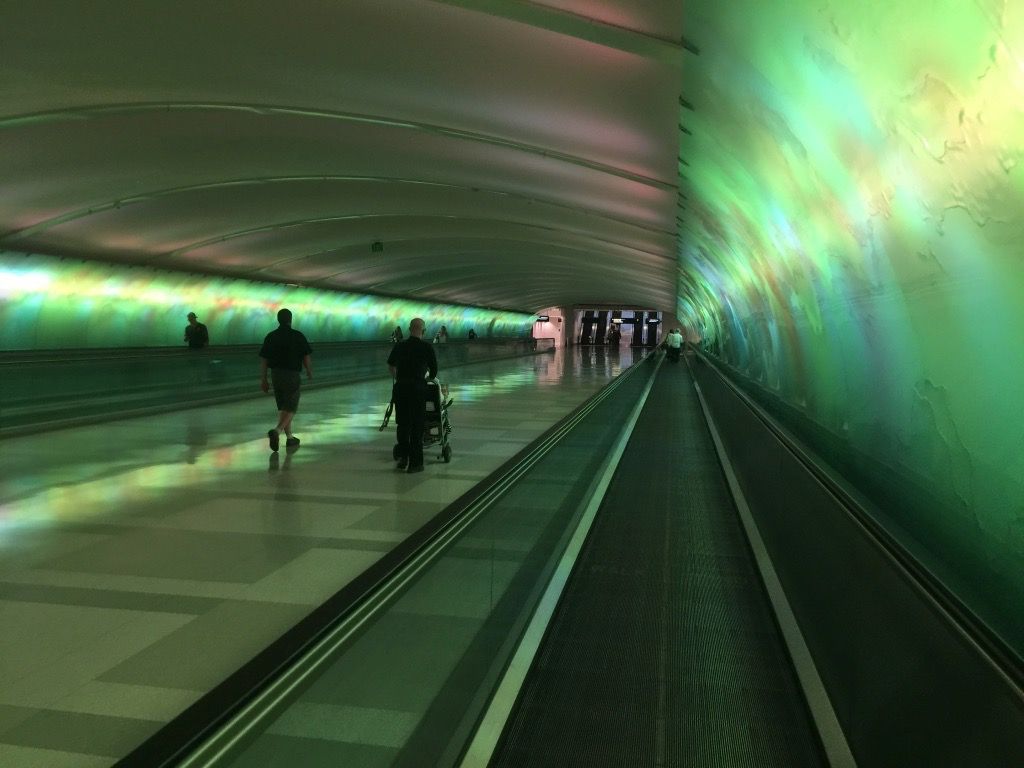 By the time I make it to the end of the tunnel, we’re at 10 minutes to departure. It’s another couple of minutes of fast (panicked?) walking to arrive at gate C21. Fortunately, boarding has not yet started. Indeed, I arrive at the gate with a decent sweat on my forehead, and about eight minutes to spare. 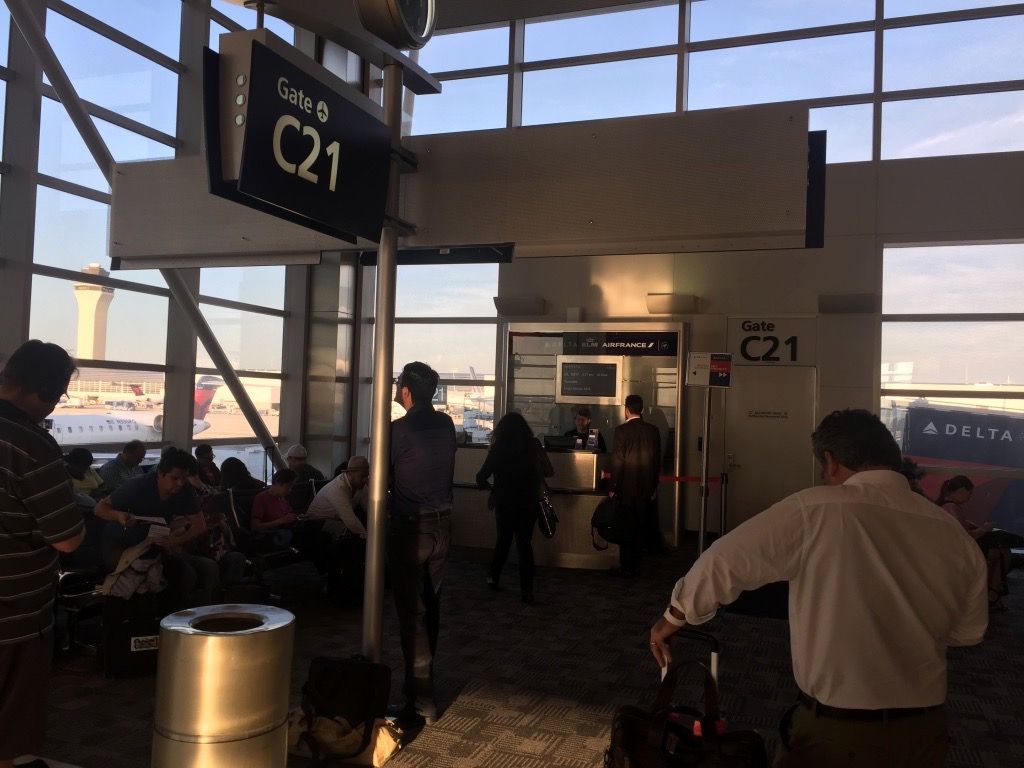 Something I’ve never seen before — they not only have Canadian entry forms available at the desk before a flight to Canada, but announce that people should pick them up and fill them out prior to the flight, due to its short duration. A good idea!

Outside, our ride over to Toronto is getting ready, and just a minute after eight, boarding is called for the Premium Zone. Let’s go home! I’m welcomed aboard by the very animated young flight attendant working First on this flight — about the third person to board after one “pre-pre-boaridng for people who need extra time” person, and one fellow F passenger.

For this flight, I’m once again in 2A, a stand-alone seat on the 1 side of this 1-2 CRJ First Class cabin. The seat comes equipped with a lousy little pillow (although it serves well as a lumbar support), a blanket, and a little bottle of water. 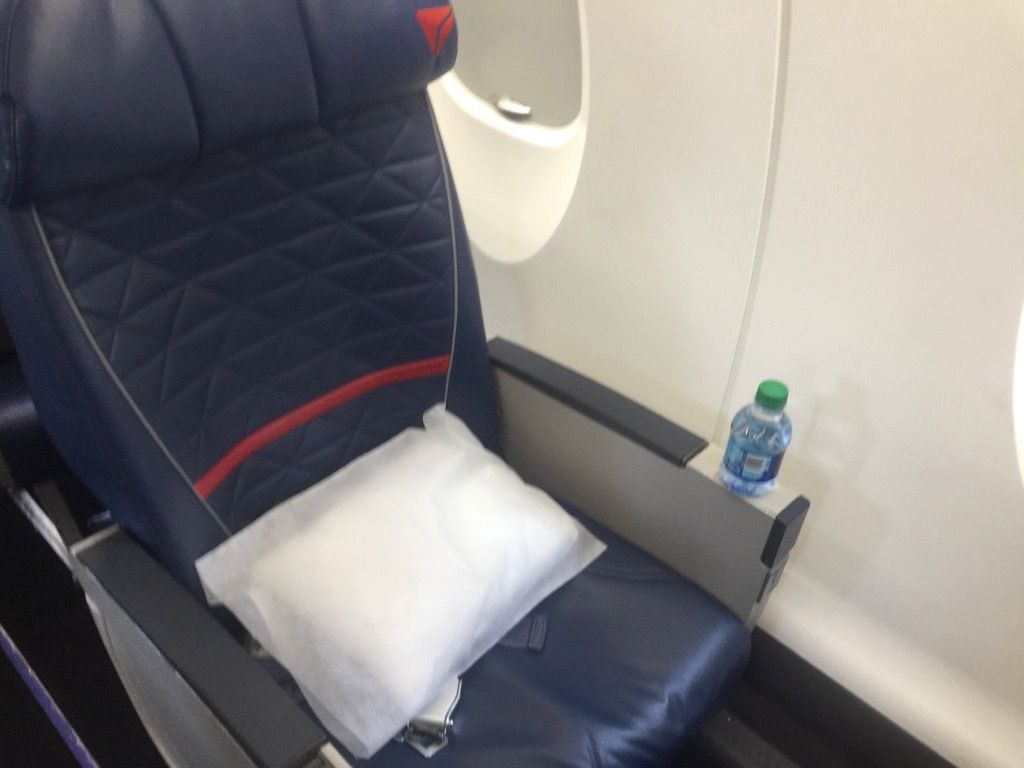 Standard legroom for CRJ F. Nothing to complain about. 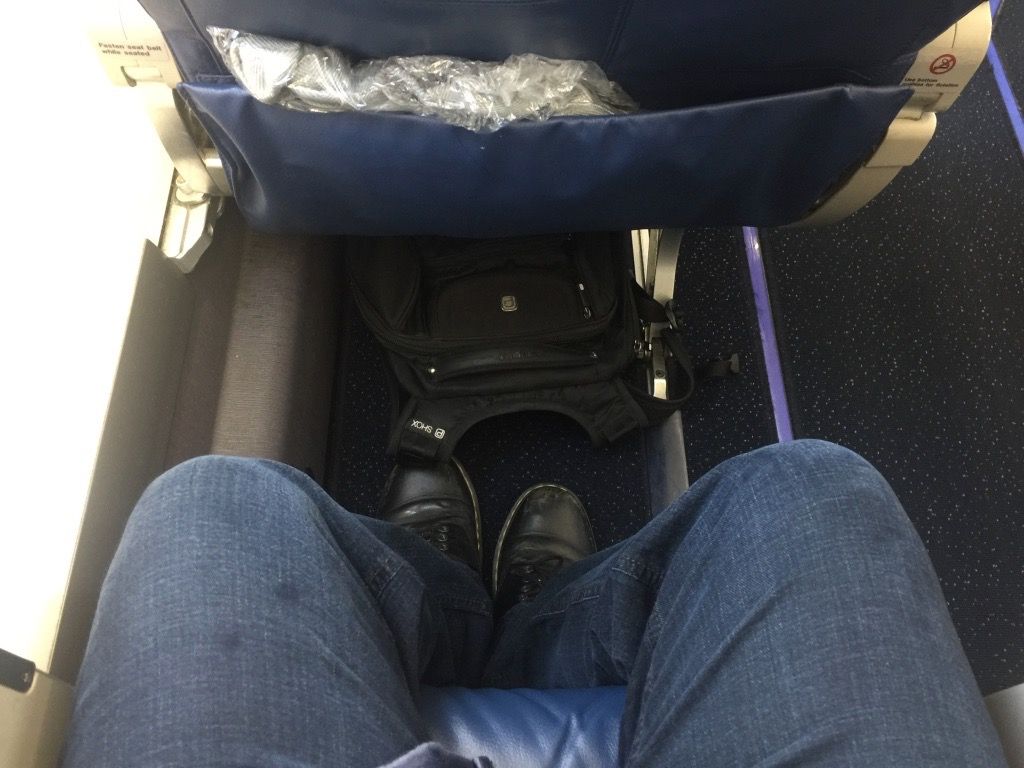 Out my window, it’s a sea of CRJs all in a row. For the record, I believe that’s the A330 that brought me in from PEK in the distance at the main part of the McNamara Terminal. Power outlet is located in the armrest. Notice also the water bottle wedged between the seat and the fuselage from some previous flight. Ooops. 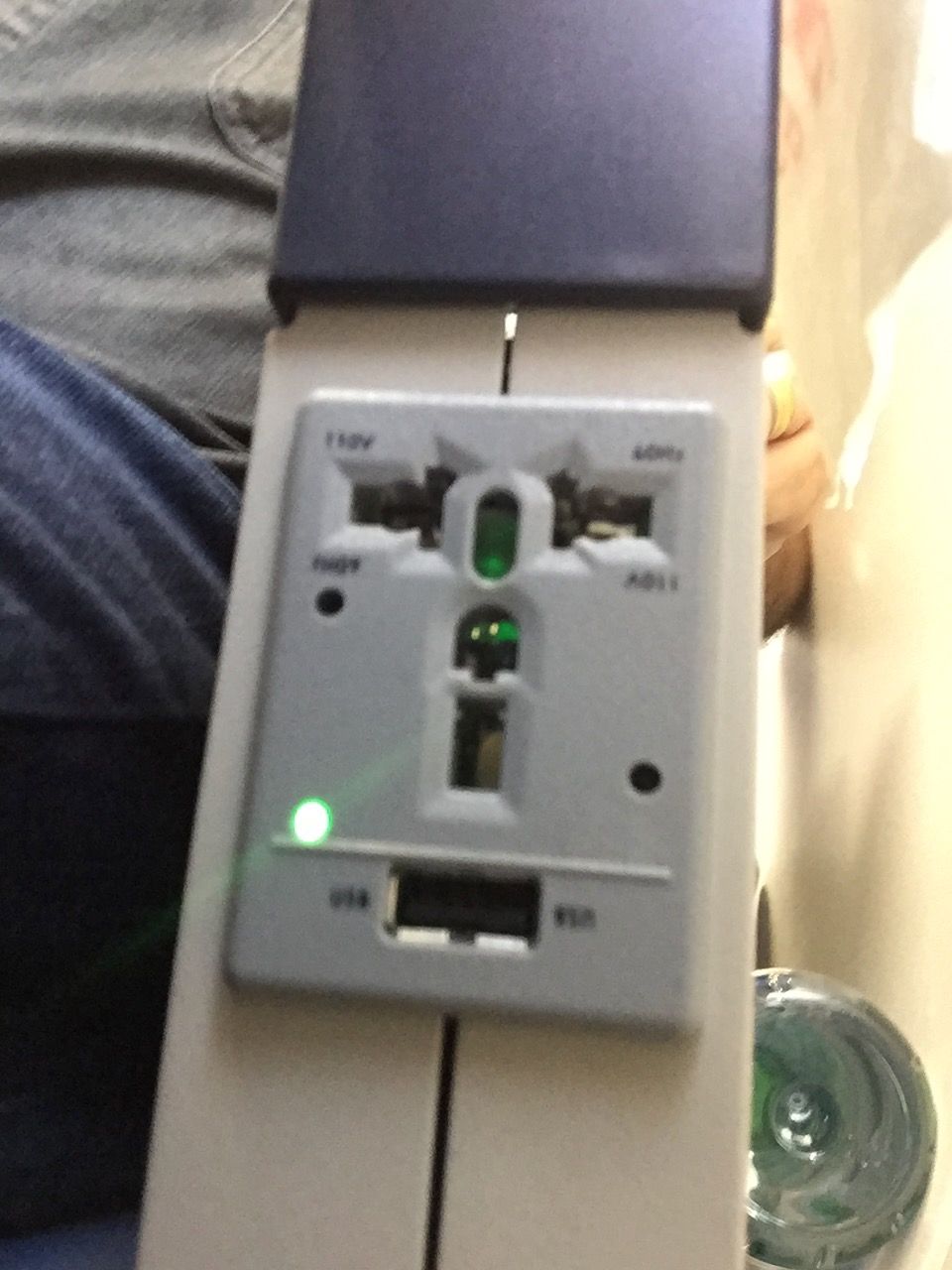 Pre-departure beverages were promptly offered, but I forgot to get a picture. For the record, I had ginger ale.

As boarding completed, the flight attendant working F started to hand out Canadian arrival forms, but was told that they’d handed them out at the gate. When the gate agent came aboard, the FA ran over to her and gave her a hearty hug, exclaiming “YOU’VE SAVED MY LIFE!!!!” So I guess the crew appreciated them handing them out, too.

Boarding was done pretty quickly, and we pushed back at 8:35, about two minutes ahead of schedule. The sun was starting to set over this Michigan evening. 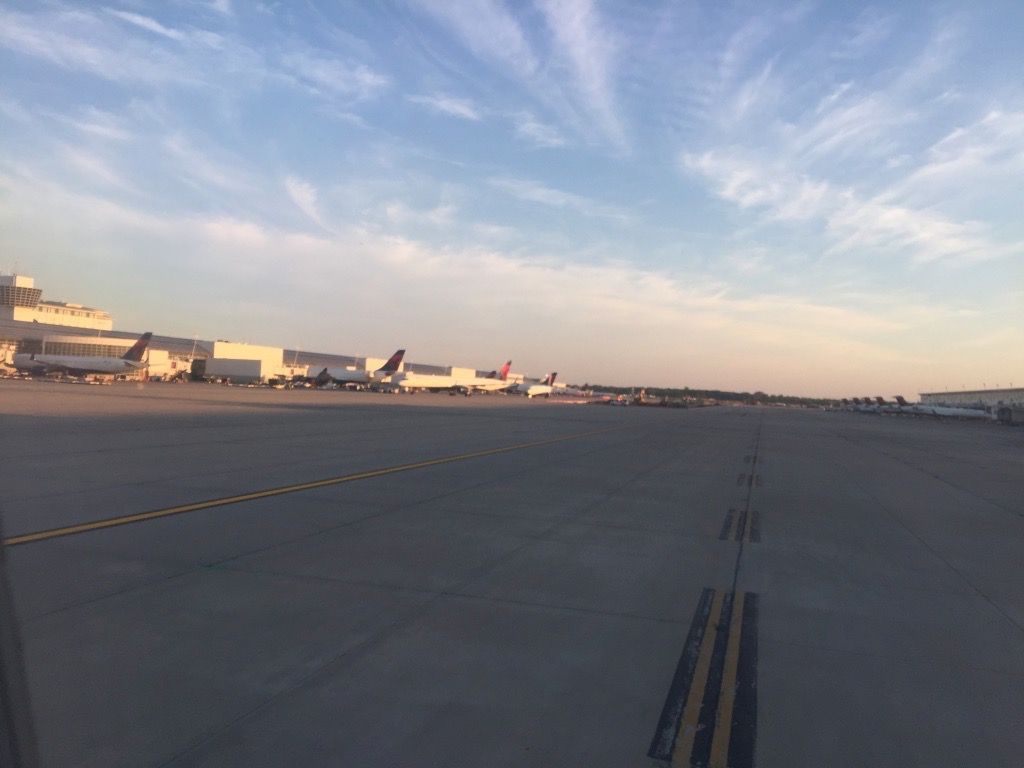 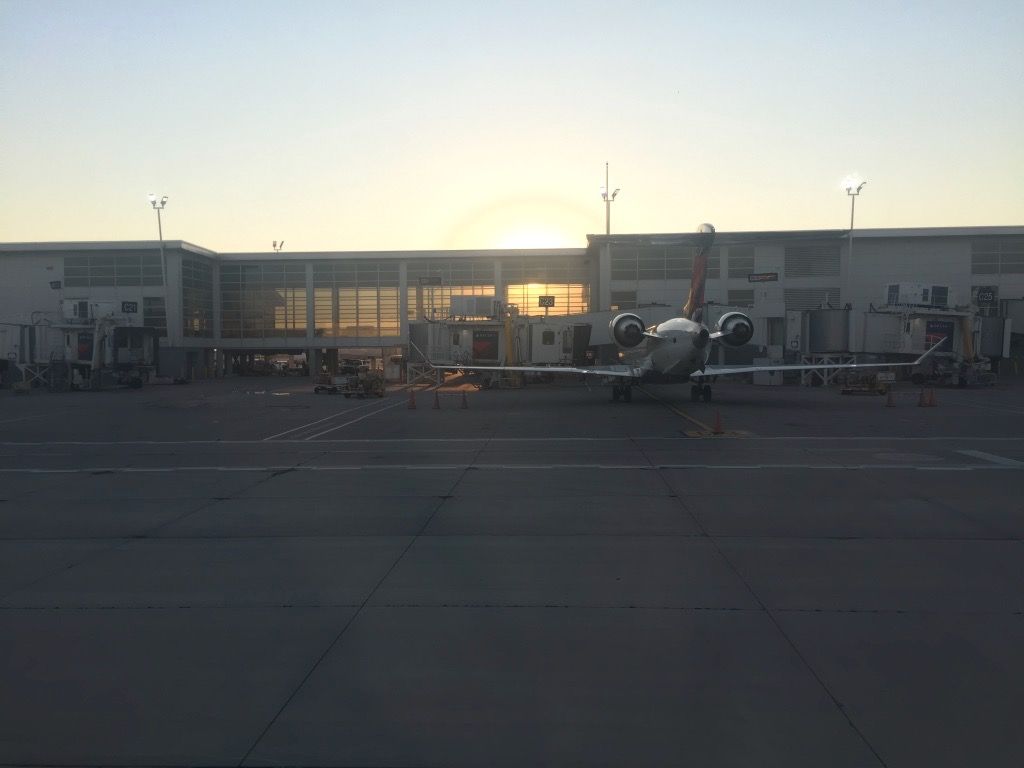 We made a pretty standard (and fairly long) taxi around to the active runway, and about 15 minutes later, we were airborne and on our way. Victory. 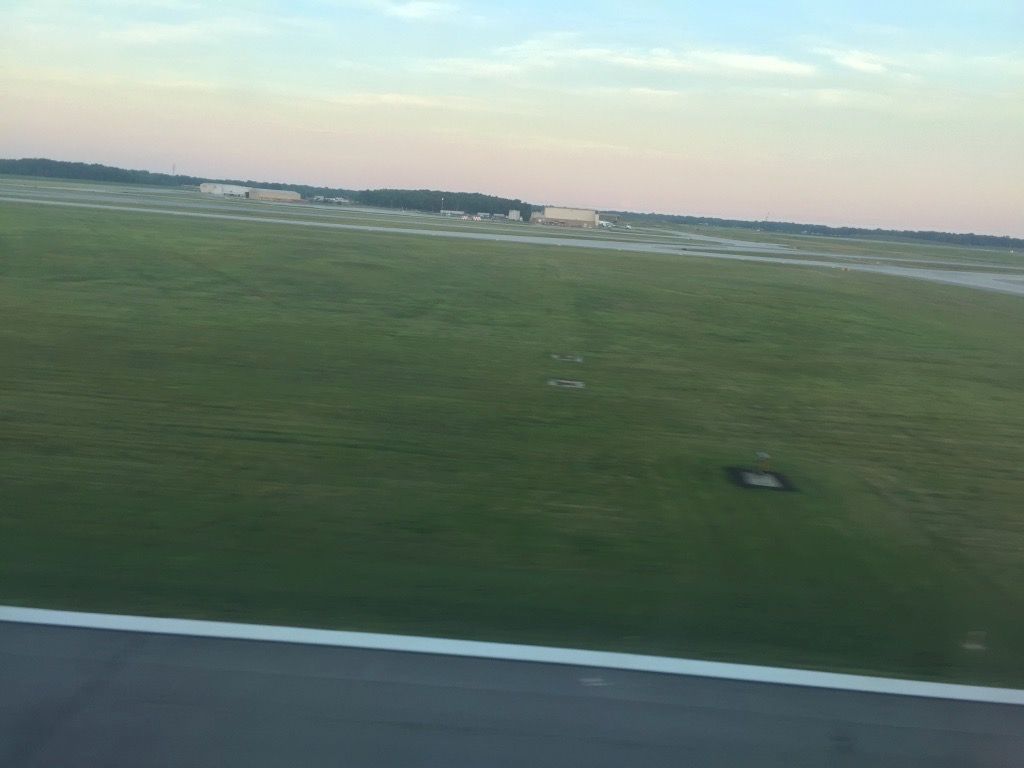 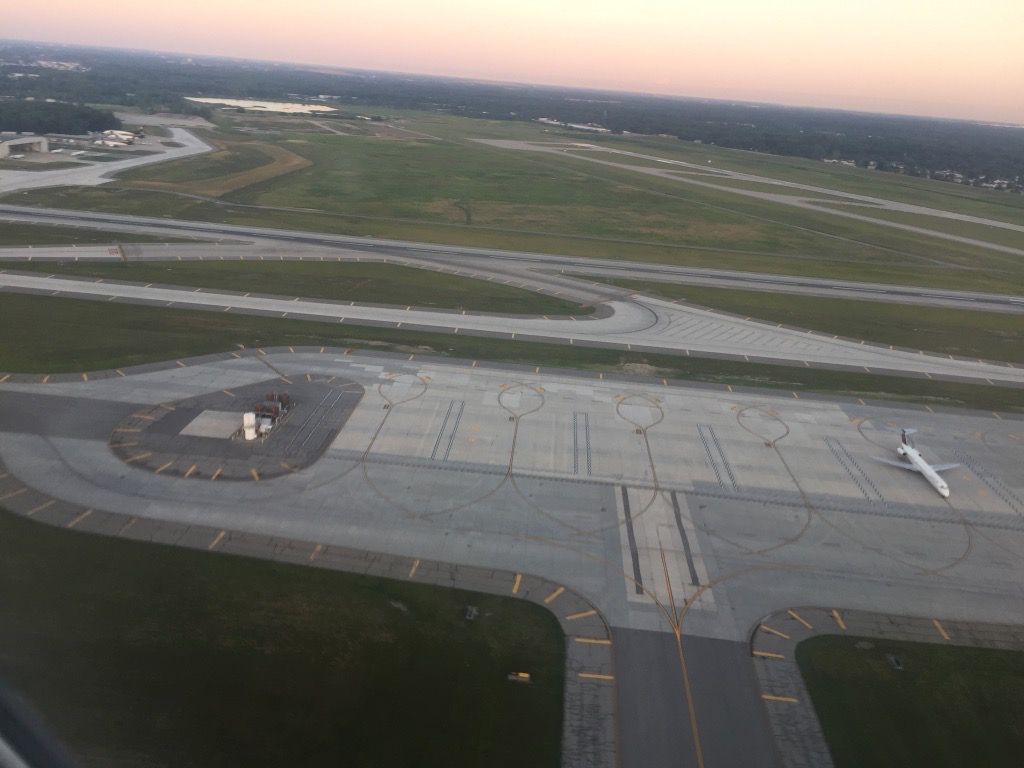 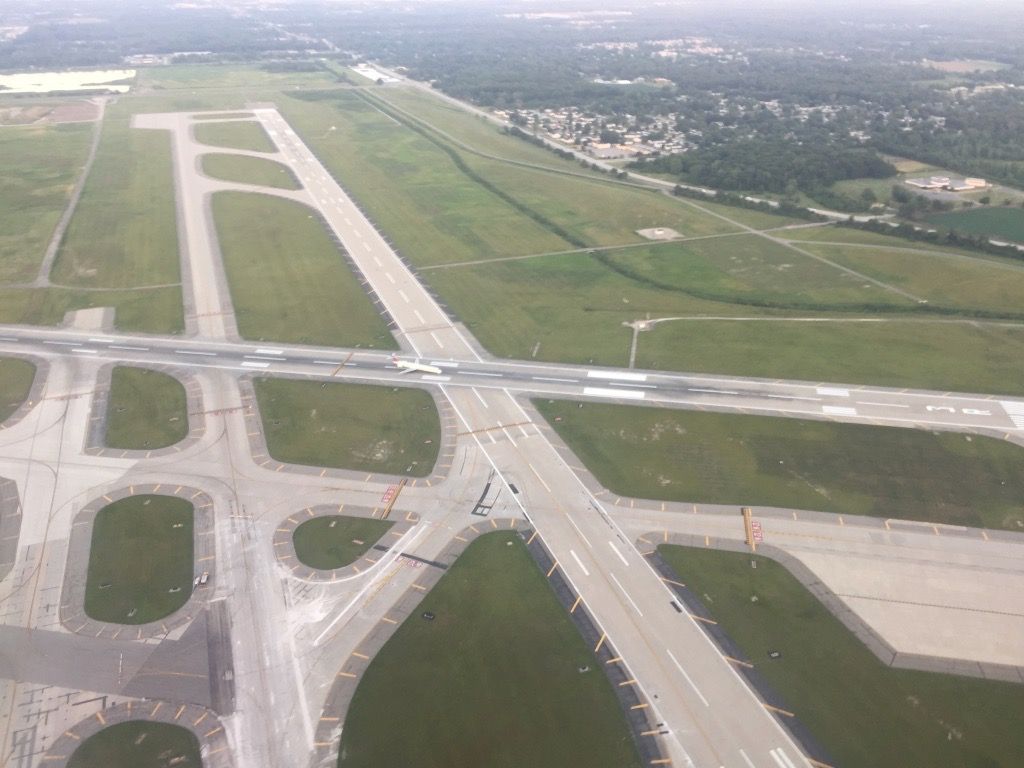 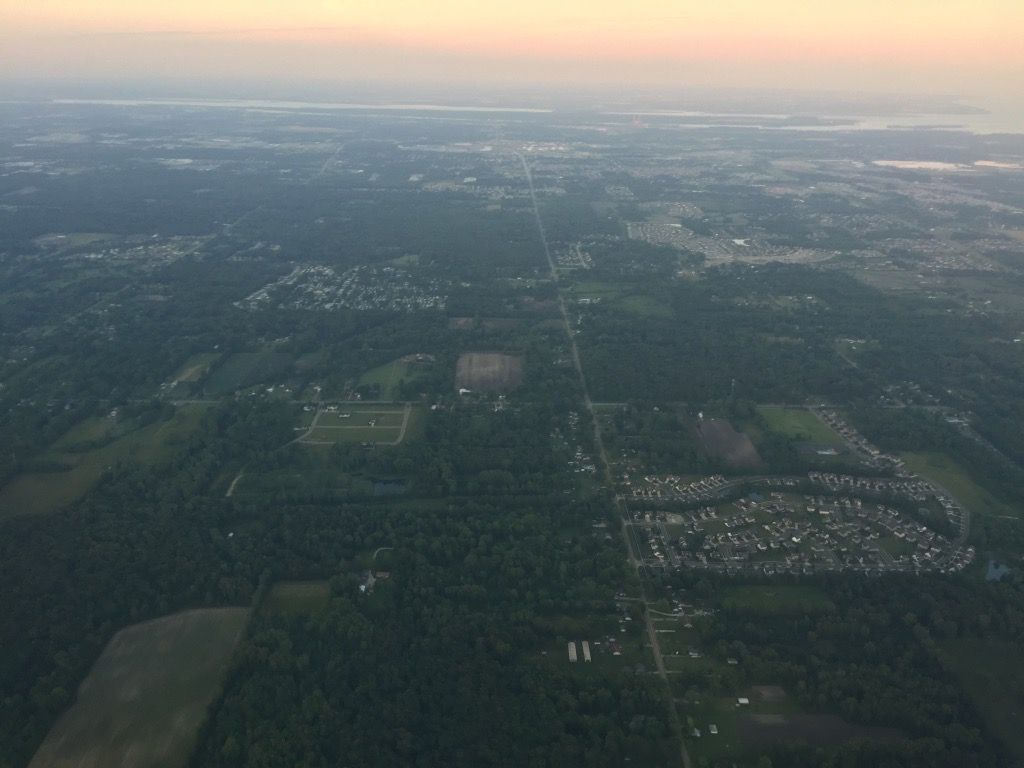 As we reached cruising altitude, drinks were offered. I went with a Bloody Mary. I’m getting used to it. And it’s okay. But it’s no Caesar. But it’ll do. 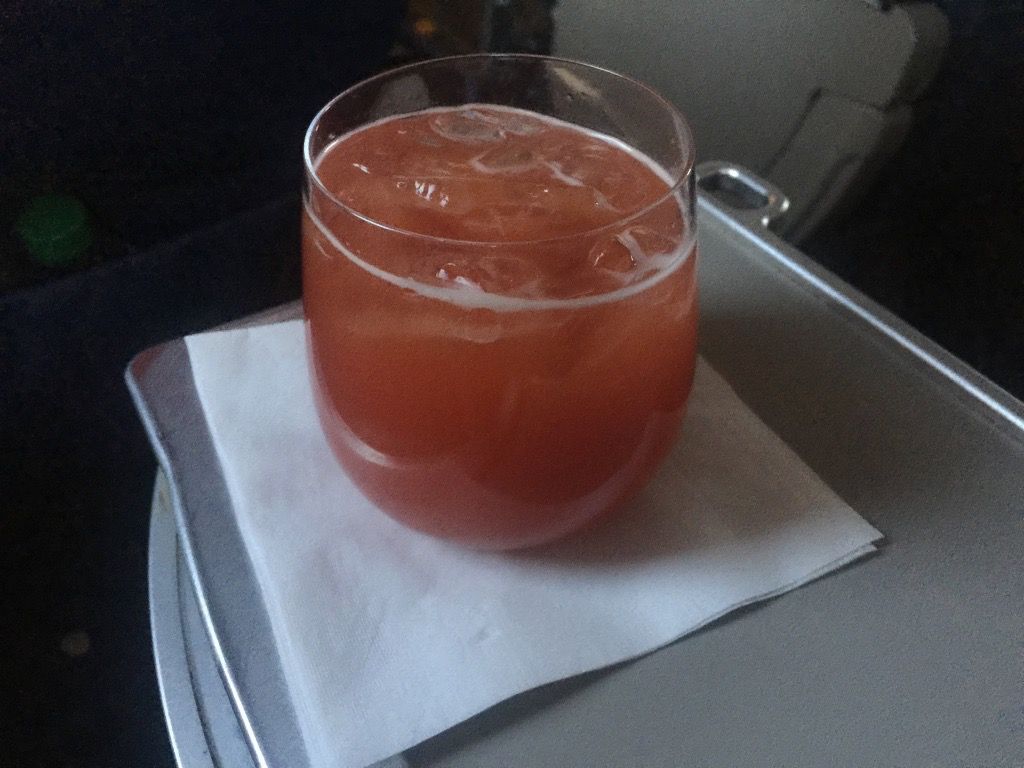 The snack basket is offered, which has some new (to me) offerings, including tasty little sunflower and oat cookies, and little granola balls from a company based just north of Toronto. Both are decent. But I miss the beef jerky. 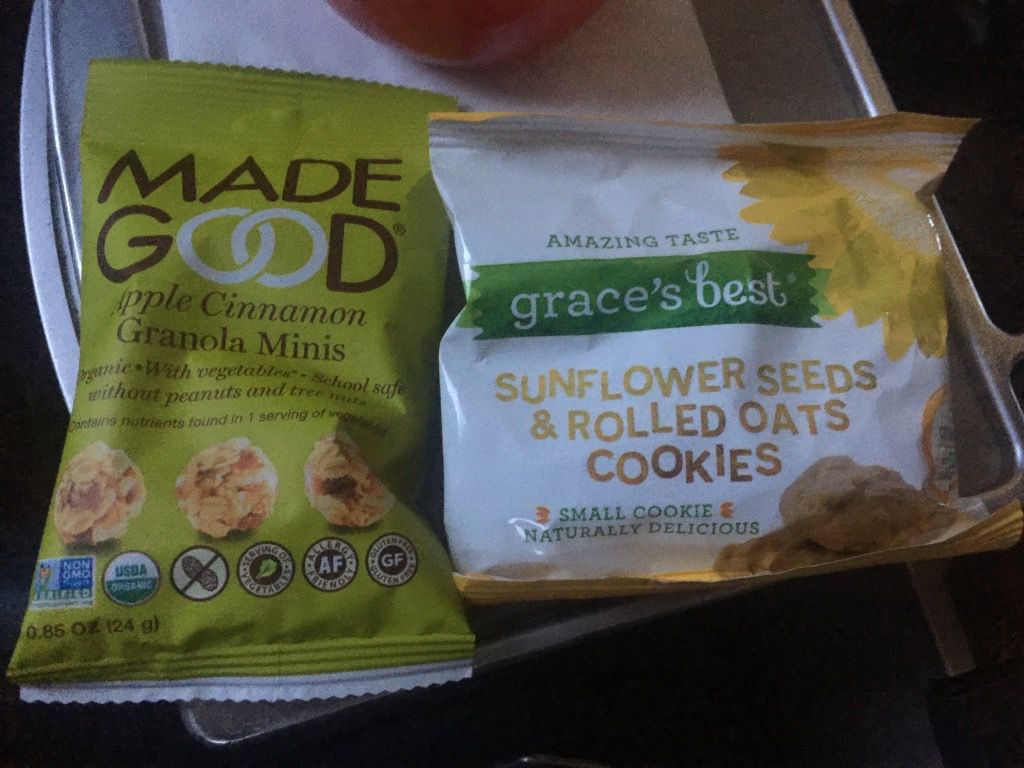 The real highlight of this flight was the crew, who made a big impression in a short time. They were excellent, and seemed to be really enjoying their job, with a friendly teasing between the two constantly.

The one working F provided a memorable moment when offering a pen to a passenger across the aisle from me to fill out his arrival form. When he said he’d give it right back, she said “Oh, don’t bother.” And went on to explain how well-stocked she was (and by her assertion, all FAs are) with pens.

“Ask any flight attendant. The first thing we do when we check into a hotel, is to look for psycho killers hiding in the shower. The second thing we do is check for bed bugs. The third thing we do is steal all the pens in the place, every time.”

Her partner was a little bit less full of personality, but nevertheless memorable. She likely stood about 6’0” or 6’1”, and was wearing heels high enough that she perpetually had to duck her head to avoid hitting the ceiling in the CRJ. If you’re that tall, and you’re going to be running around CRJs all day, why on Earth would you wear heels?

The sun started sinking below the horizon as we crossed into Canadian airspace. This is a short 21-minute flight, so the attendants worked quickly with service up front, and water service in the back. 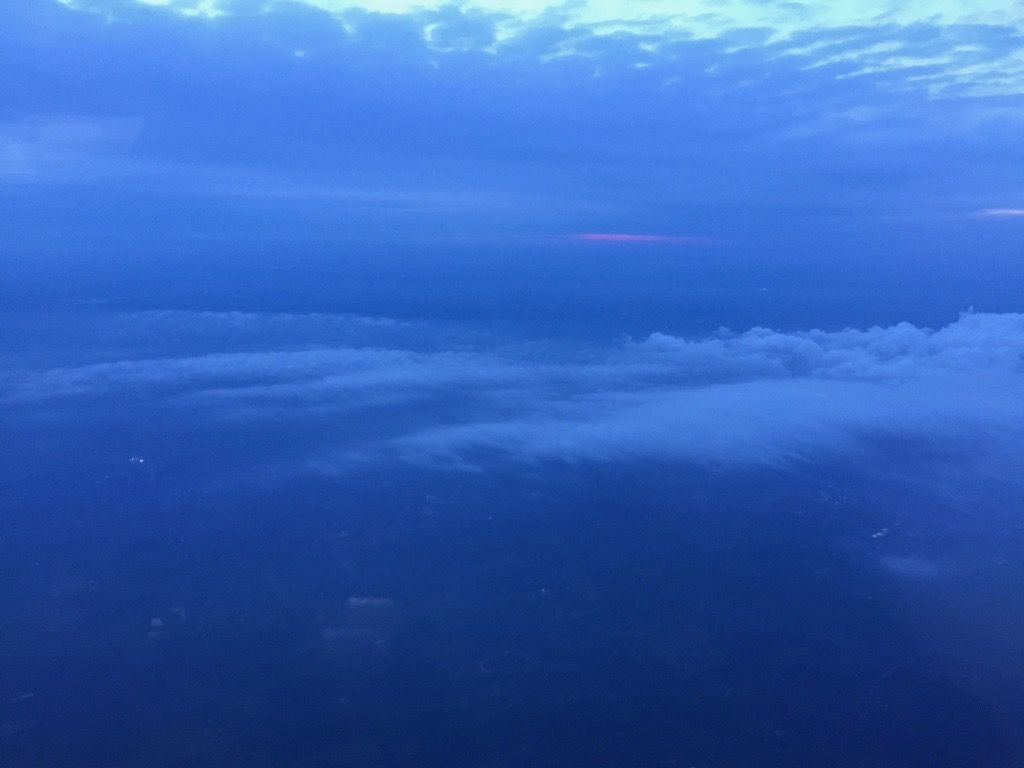 Soon, we were almost there. After descent began, the flight attendant working F offered a drink refill, but I declined. I was happy with where I was, and would have to drive in the not-too-distant future.

On arrival, flying over Downsview Park. 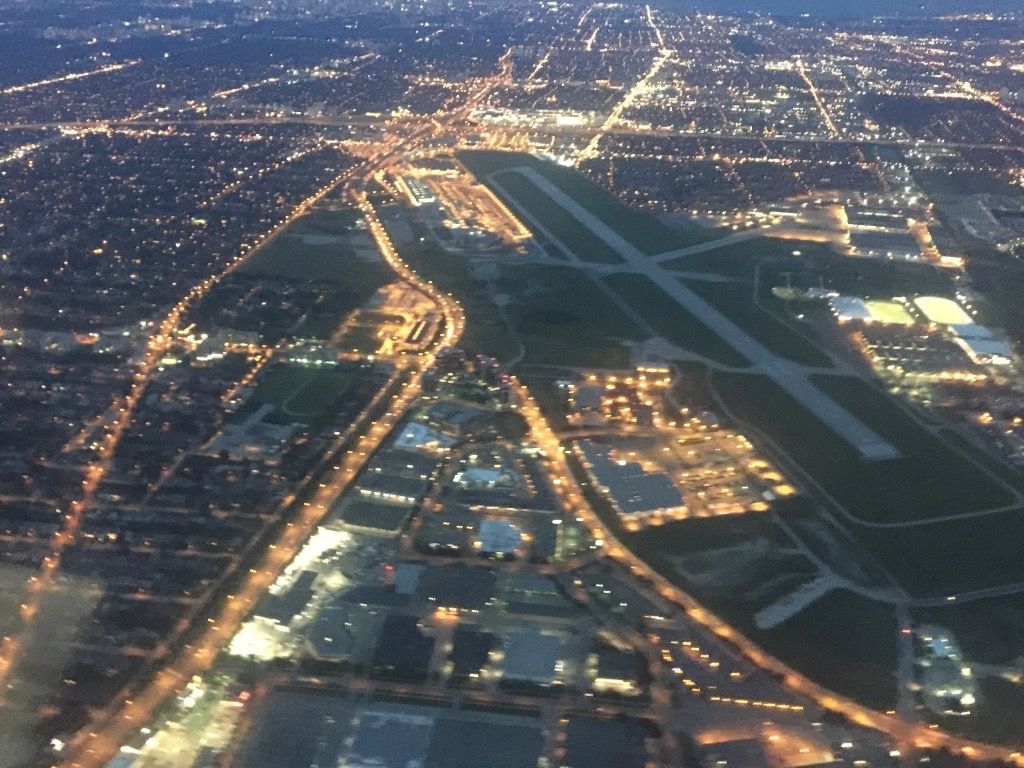 And then we’re there. 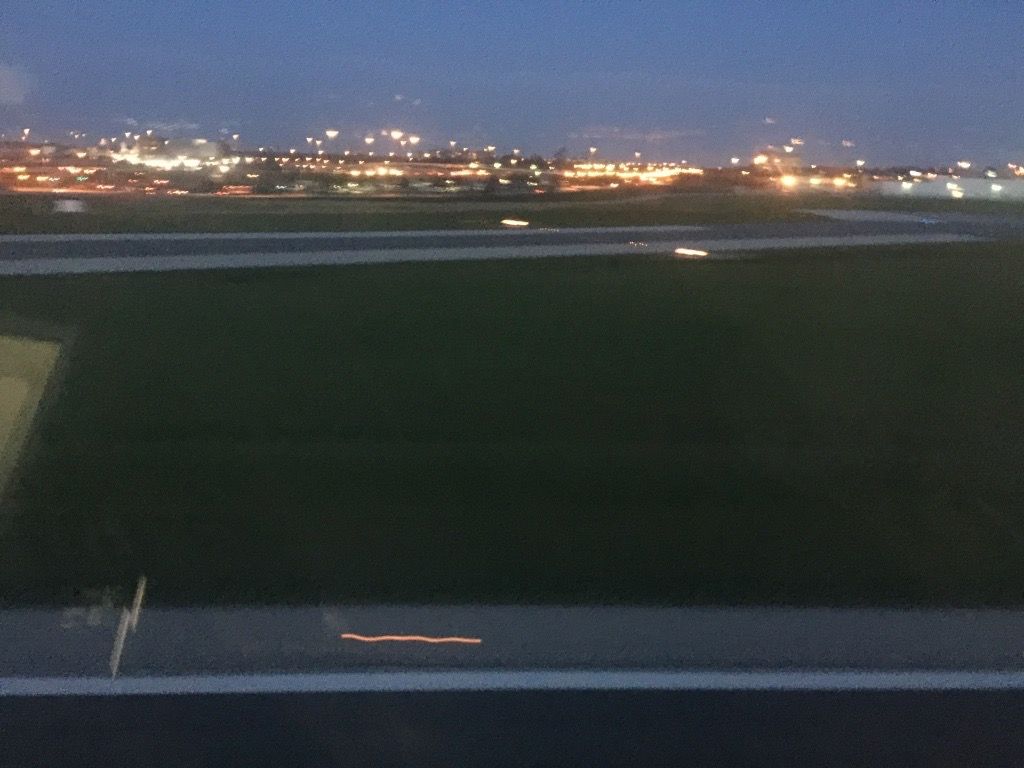 A fairly short taxi later, we arrived about halfway down the desolate transborder pier at T3, and were quickly let free. 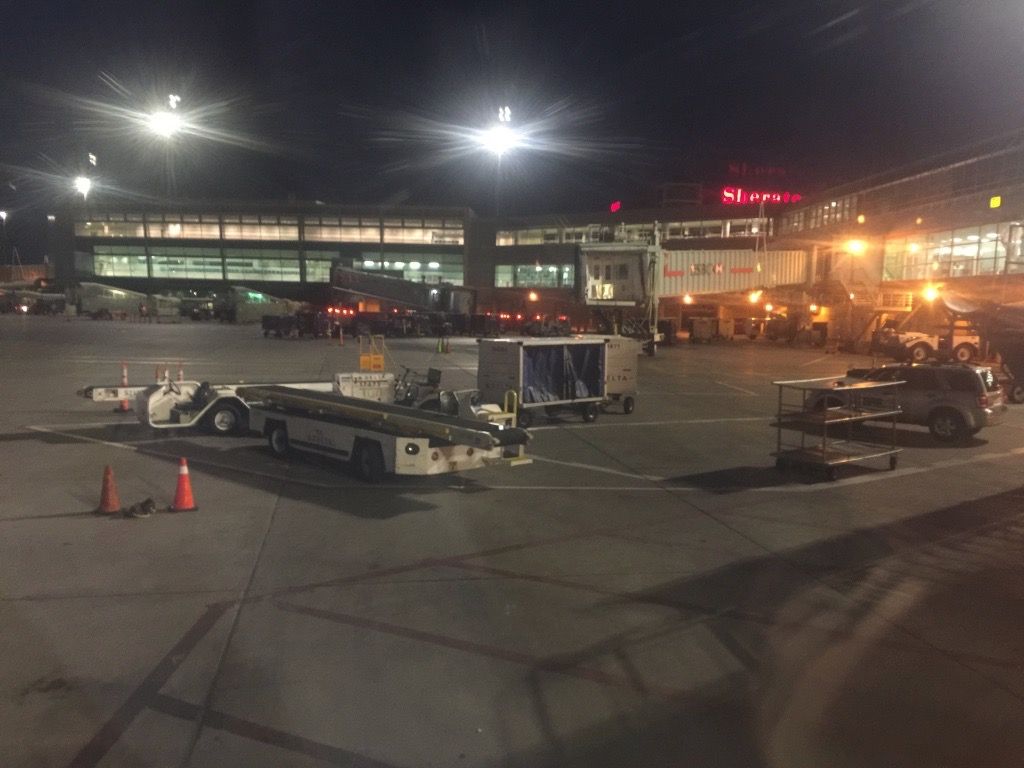 Customs was quick, and although it took a while to navigate the absolutely packed baggage and arrivals halls, I was soon enough outside, and this adventure was over.

So there’s the long version of the story.

Thanks for joining me on this adventure. I hope you’ll join me for my next adventure, coming soon to a flight-report.com near you!
See more

A fine short CRJ hop, made much more memorable by an entertaining, friendly, and engaged flight attendant crew. In Oscar Munoz’ parlance, the FA working F on this flight was “a Jenna.” And all airlines could use more Jennas.

The contributors of Flight-Report published 4 reviews of 2 airlines on the route Detroit (DTW) → Toronto (YYZ).

The average flight time is 0 hours and 47 minutes.