By round_the_world 2017
Published on 26th August 2017
This is the first trip report in a series of many to come from my around the world adventure. The trip spans 5 and a half weeks and most flights are in business/ first class cabins, primarily using miles and points. My reviews will be focused on basic lounge environment and quality and the general airline on-board experience. I will also give a high level outline of what points/ miles I used for each flight and how they were obtained :)

Points:
I obtained my award ticket from ORD to HKG (layover) to JNB for 70k Alaska Miles and about $50 in fees. In my opinion, this is one of the best uses of Alaska miles if you are looking to get to Asia or Africa, as it is the same cost (70K) whether you stop in Asia or Africa. 70k for F to Asia is good in of itself, so to tack on an additional 12 hours trip to South Africa (albeit in Business - no F offered on fight), is a great deal. Plus, when booking awards on Alaska partners, you can take a stopover, which I took advantage of to do the rest of my Asia tour, without having to book a separate flight to Africa. Alaska Miles can be obtained from crediting partner flights to your MIleage Plan account (such as American), but the best way is to get the BoA Alaska credit card, which offers a 30k sign up bonus. They also have a small business card with the same sign up bonus, if you qualify. Those two cards will essentially get you to 70k miles, which is not bad for $75/yr fee cards :) Alaska also regularly has 30-40% off sales on buying points, bringing down the cost to around 2.2 cents each, purchased. Even doing the math on buying 70k points, is a steal to fly Cathay F to HKG, as it would cost about $1.5K to purchase all those points. Compared to the $11.5k price tag of this flight from ORD to HKG, and additional $3.5k to JNB in J, it's pretty great value. For myself, using earned points, the redemption based off published fares was about 22 cents/ point :) I think most point experts value Alaska miles around 2 cents/ each, so I consider this phenomenal value.

Airport:
I had about 3 hours from when my flight landed from Nashville, until CX807 departed. The Cathay flight was delayed 30 minutes, which, based off Flight Aware status tracker is not uncommon and is in-fact on the better side. I will say that for passengers connecting on different airlines through ORD, that you need to go out of security, go to Terminal 5, and then go check in and go through security again. Budget at least 1 hour for this, as there is airport trains involved and lines. Also ORD is not the most advanced airport and the infrastructure is mediocre at best and makes the process more complicated.

Having said that, I got through security and the check in process in T5 by around 2pm and proceeded to the BA First Class lounge. This lounge is a bit of a let down. Very small, mediocre seating, kind of dirty and just OK wifi. Compared to the inflight Cathay F experience, it's hard to include the lounge in the same review. Anyway, the one positive the lounge has is that it has a good cappuccino maker and has Woodford Reserve Bourbon, Glenlivet 15 Single Malt and Grey Goose Vodka, for those who enjoy a lounge beverage :)

Flight:
Boarding commenced around 30 minutes prior to departure. Overall I'd say it's a bit of a hectic experience. There wasn't a dedicated first class line and everyone seemed to be scrambling around, which wasn't ideal.

Once I entered the doors, however, the chaotic mess that was the boarding process turned much more tranquil. I was directed to my seat (1A) and the 2 F cabin flight attendants introduced themselves and offered me some Krug and warm nuts, which were great. I was also presented with amenity kit and PJ's/ slippers. Amenity kit was just OK, but the PJ's were very soft and comfortable and made from HK designer/ store PYE (I kept them and have used on other flights after, including Cathay Biz long-haul, as you don't get PJ's on those flights).

The seat itself is very large and the gentle cabin colors are great. My particular seat/ suite showed a bit of wear, but was still very comfortable and elegant. Also, for those traveling solo, I would recommend the left side of the cabin (A seats), as they are very private. 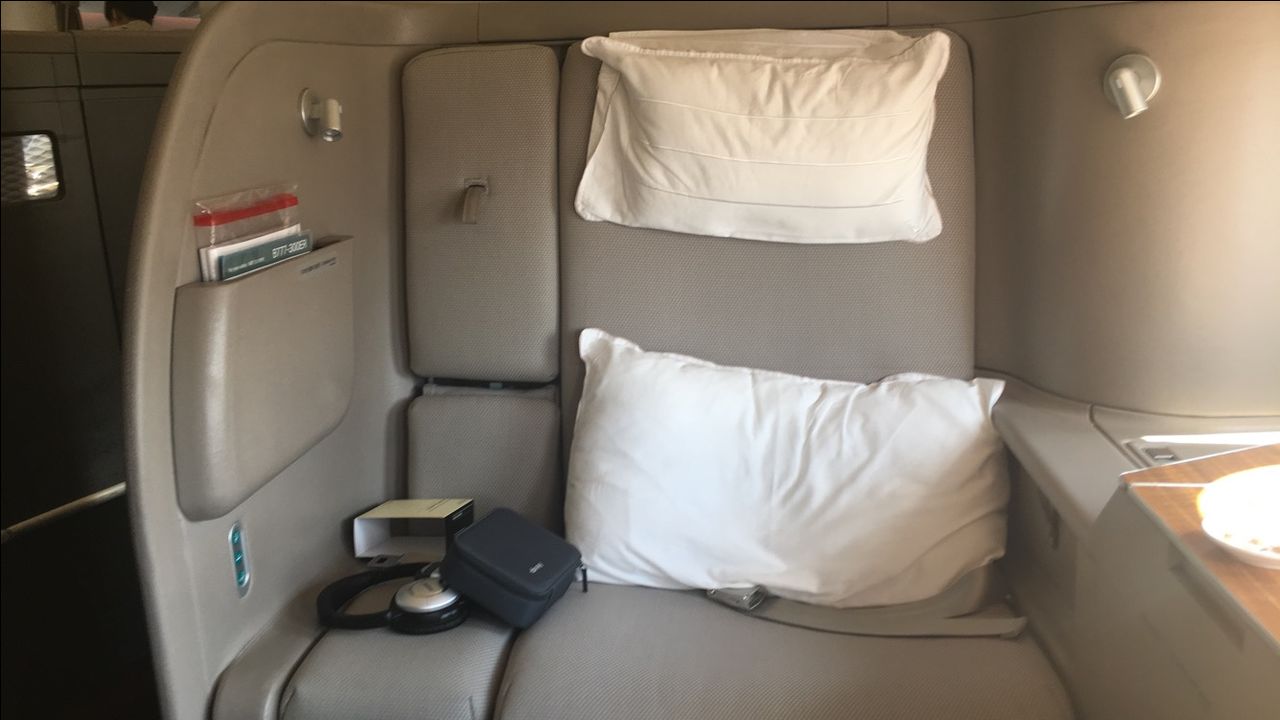 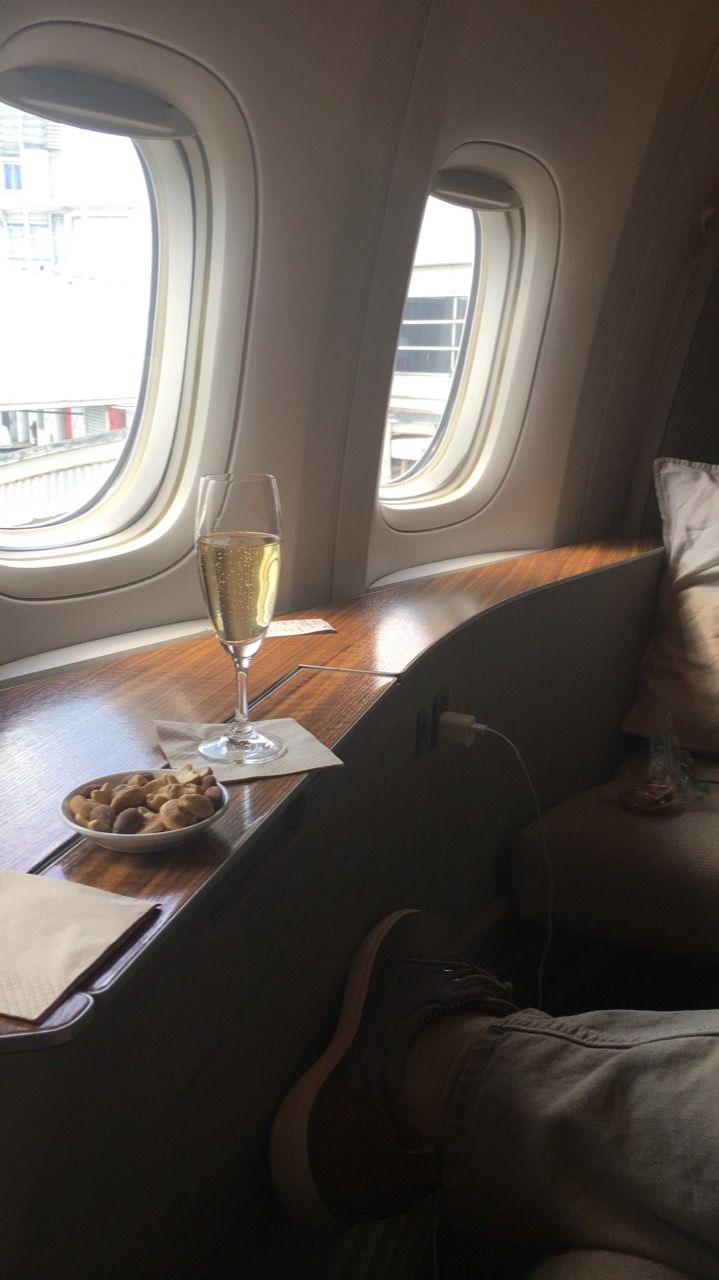 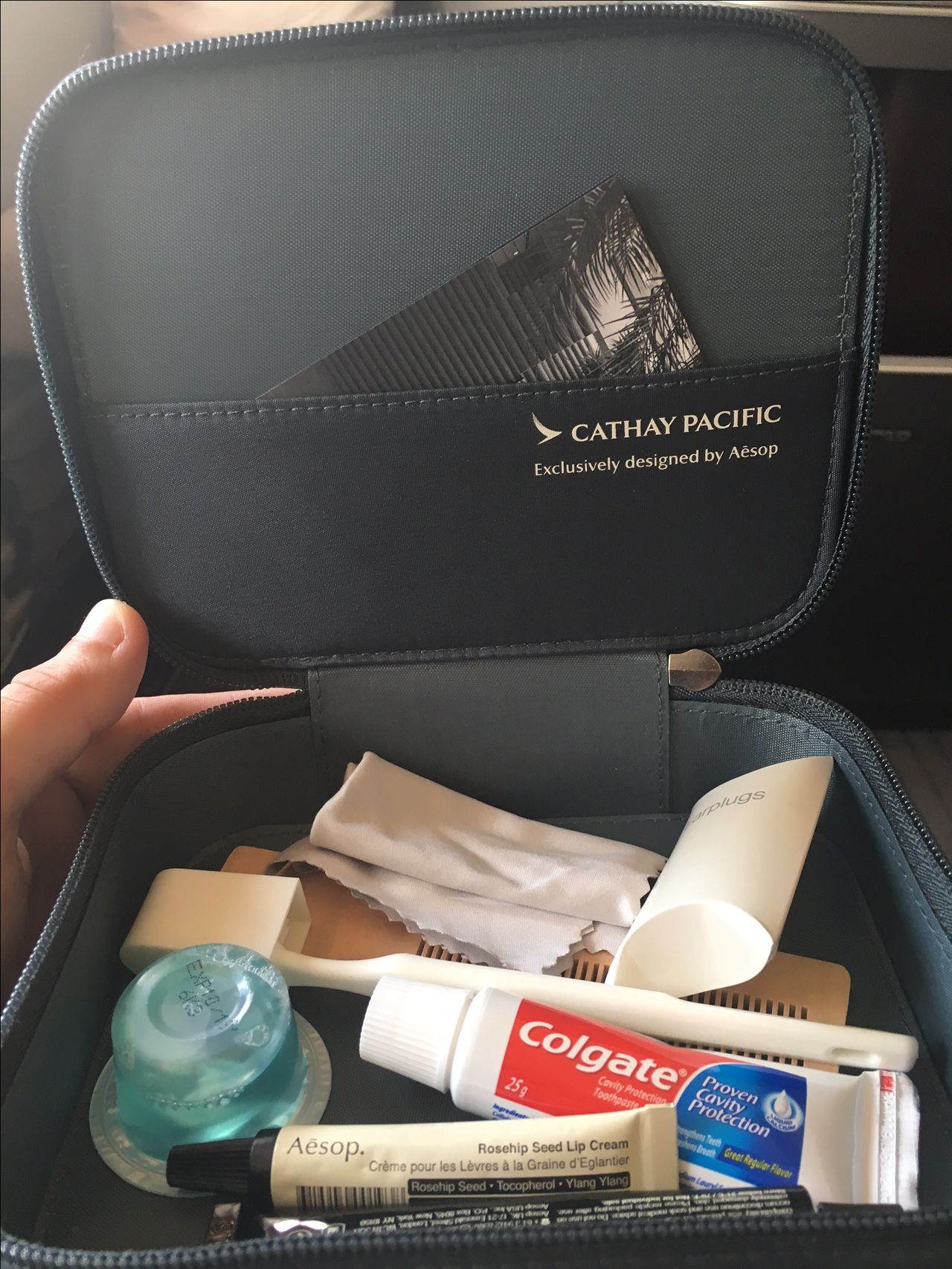 Once we took off the crew began to take lunch orders. I went with the caviar and Krug, followed by Lemongrass soup, the Prime Filet and a cheese plate. All were very good. The steak is obviously not quite as juicy as one would be at a good steakhouse, but I found it quite tender. I ordered mine medium and it was probably on the medium-well side, but was still tasty with the Bearnaise sauce :) Throughout lunch I enjoyed more Krug, some Pinot Noir and some of their dessert wine, as well as a Johnny Walker Blue to finish it off. 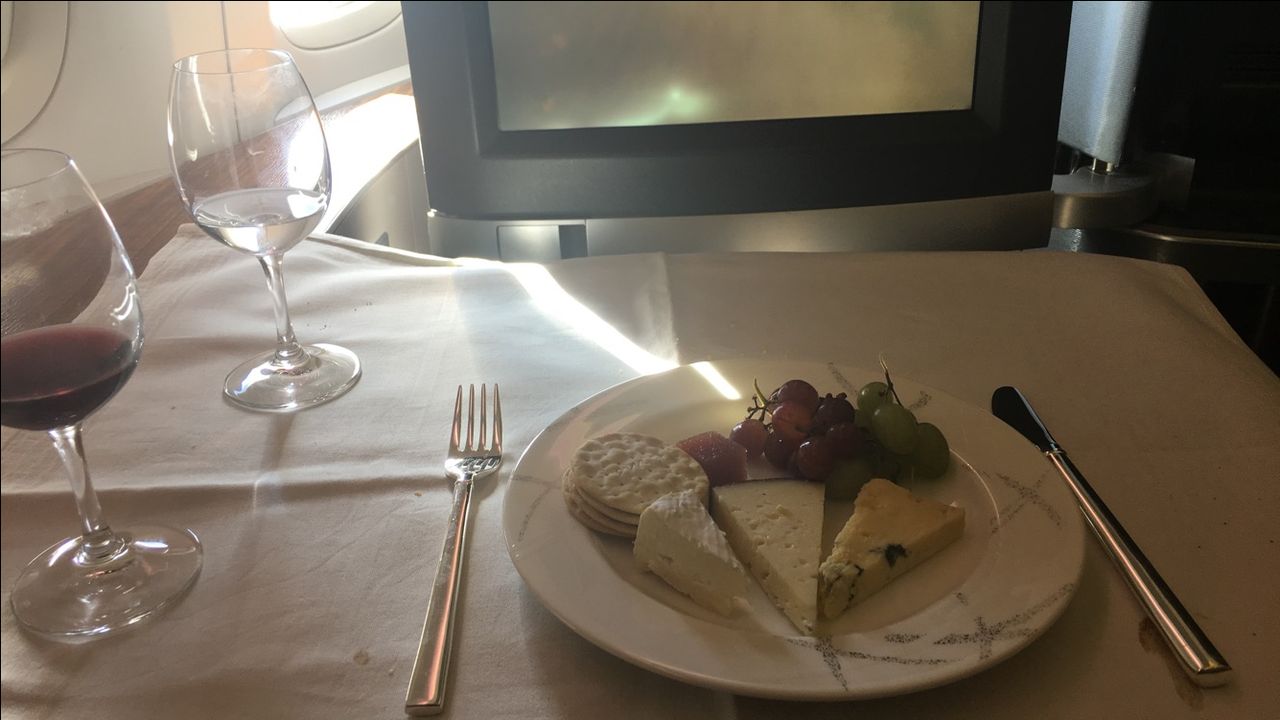 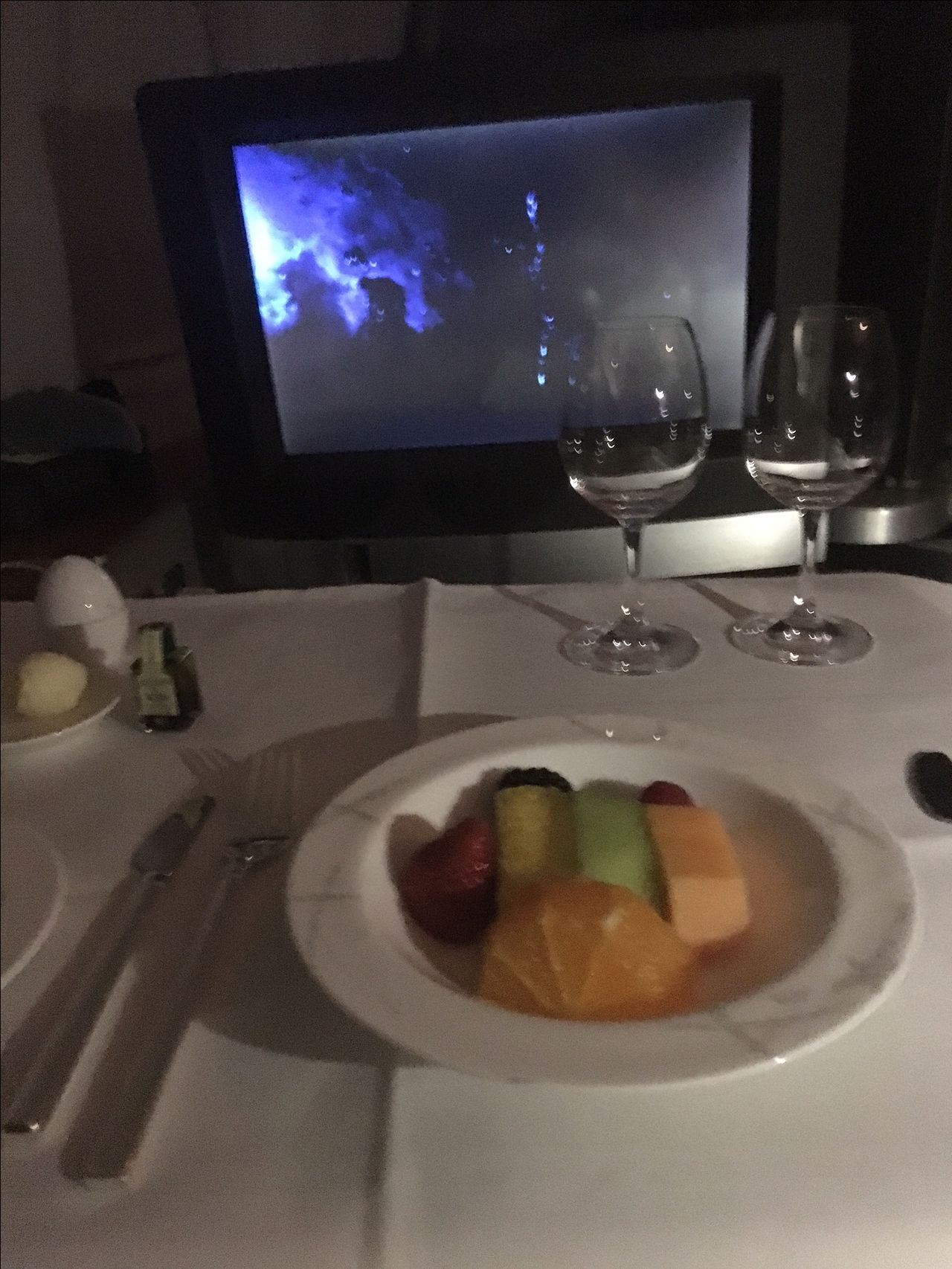 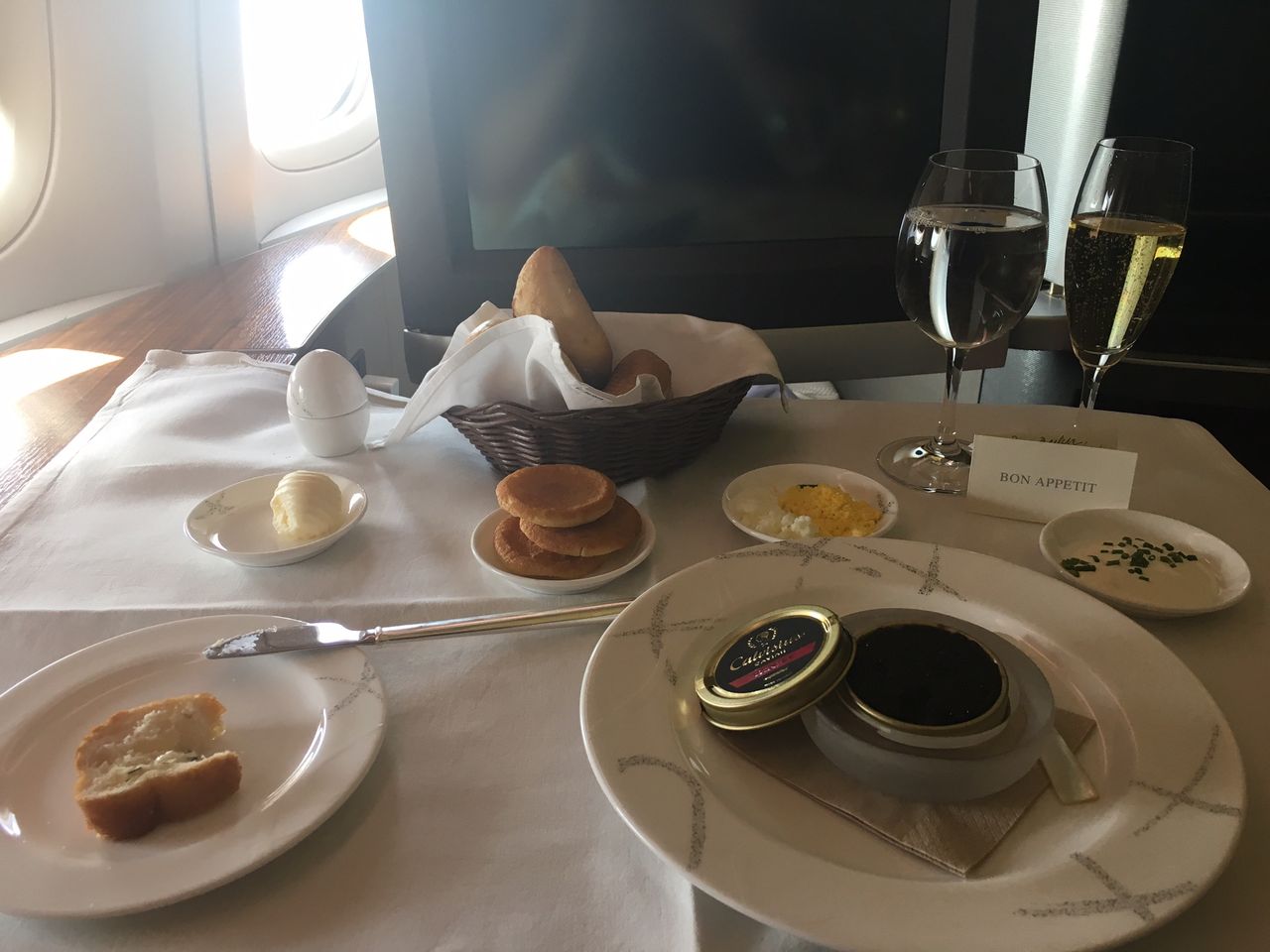 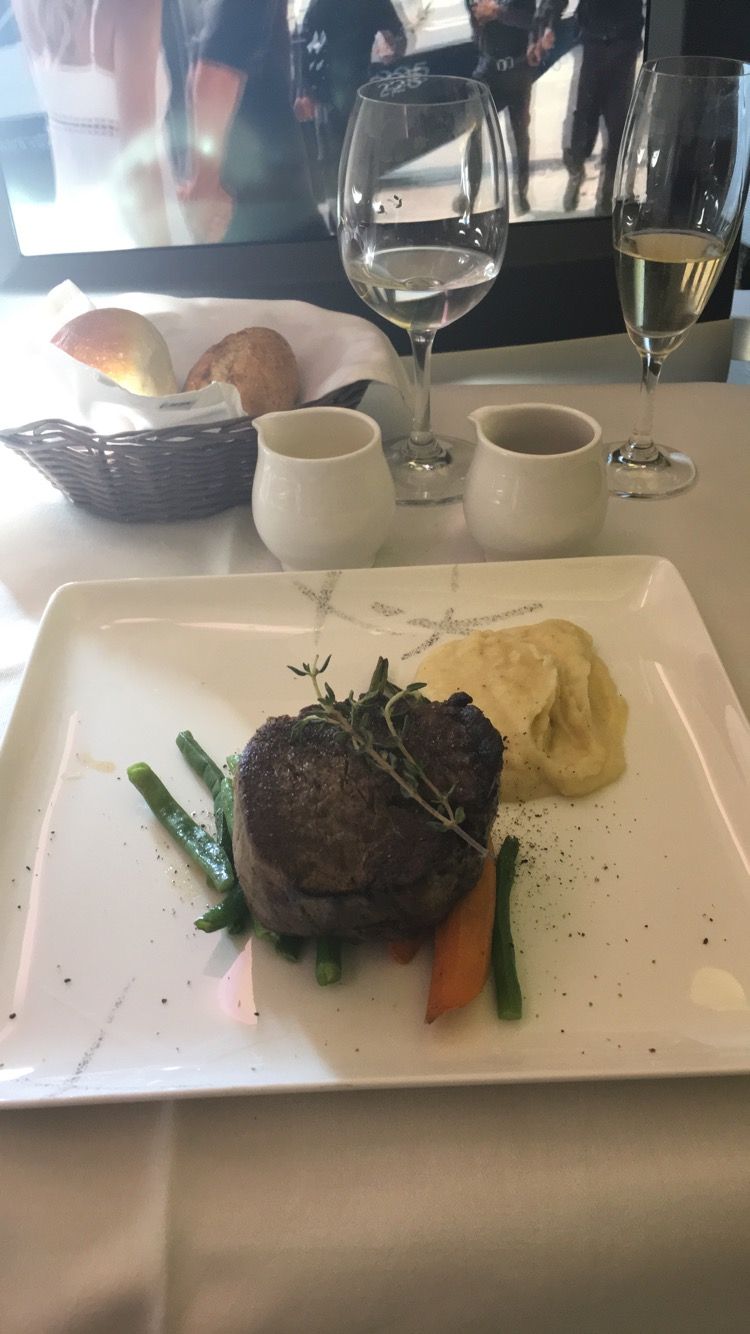 Cathay's entertainment system is pretty good. It's annoying that there are ads before every show episode or movie. But otherwise the selection is big enough to keep someone occupied for a few hours easily. I think I watched 2 movies and about 8 episodes of a 25 minute TV show. 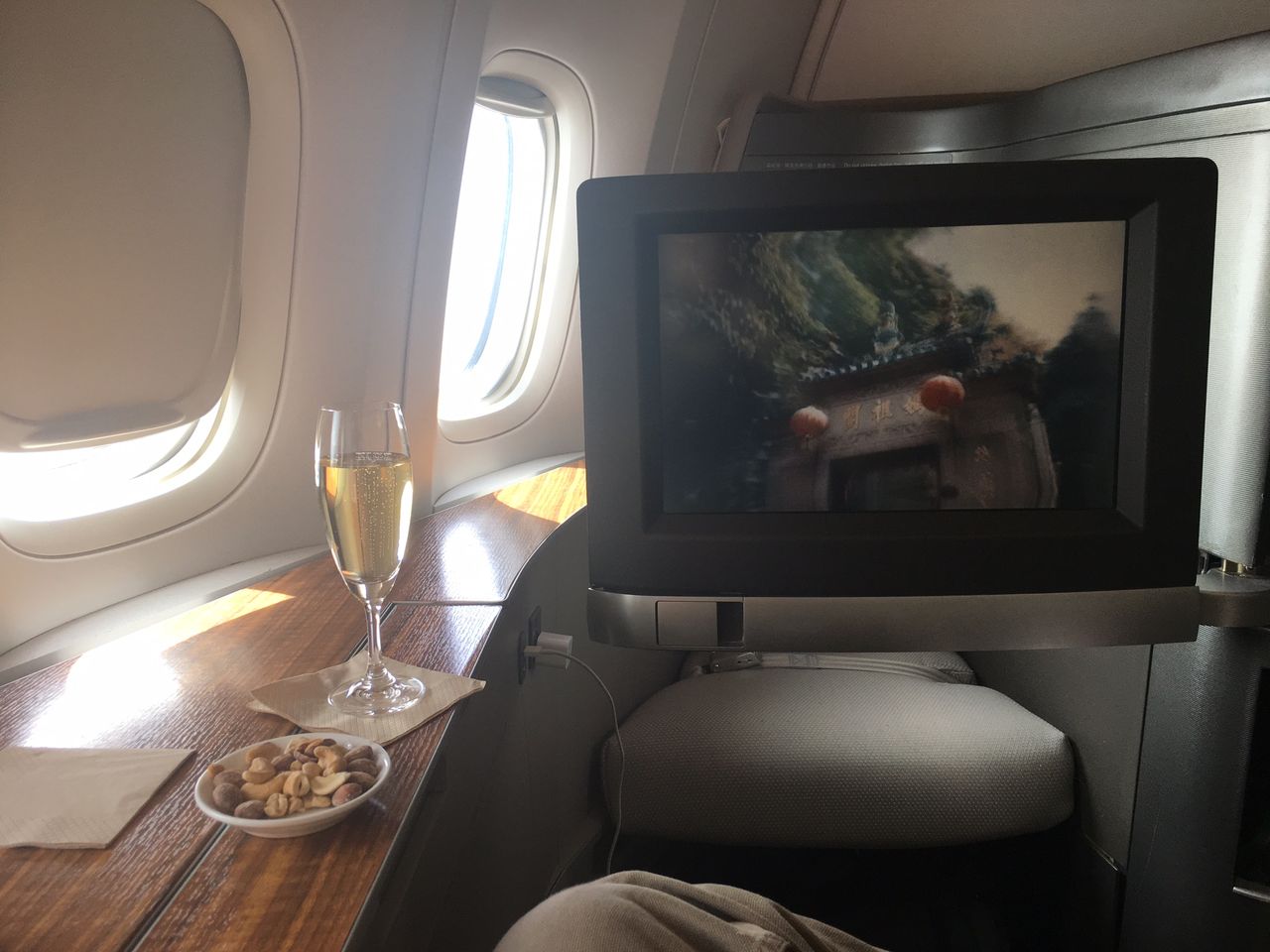 Despite it being light outside for the majority of the flight, the cabin does get pretty dark when all the blinds are closed, so it is possible to have a nice, dark sleeping cabin. About 6 hours into the flight, I asked the crew to make up my bed. The beds in Cathay F are very comfortable. They are big enough that you feel like you're in a legitimate Twin-ish sized bed and not in some airplane seat. The mattress pad and comforter are both very comfortable and i was able to get a solid 4-5 hours of necessary sleep, which is the most I've ever gotten on a plane.

Upon waking I ordered some Shrimp Wonton soup (which is on the snack menu). I would recommend putting in the chili paste, as it is very mild to begin with. A nice dish, however. I also order ordered some HK style milk tea and a cappuccino. I then proceeded to order off the dinner menu, ordering the fruit plate and the rigatoni, both of which were good. I also had a couple cognac's after dinner, which felt a bit strange at 5am CST in the USA, but I justified considering it was almost 8pm HK time :) 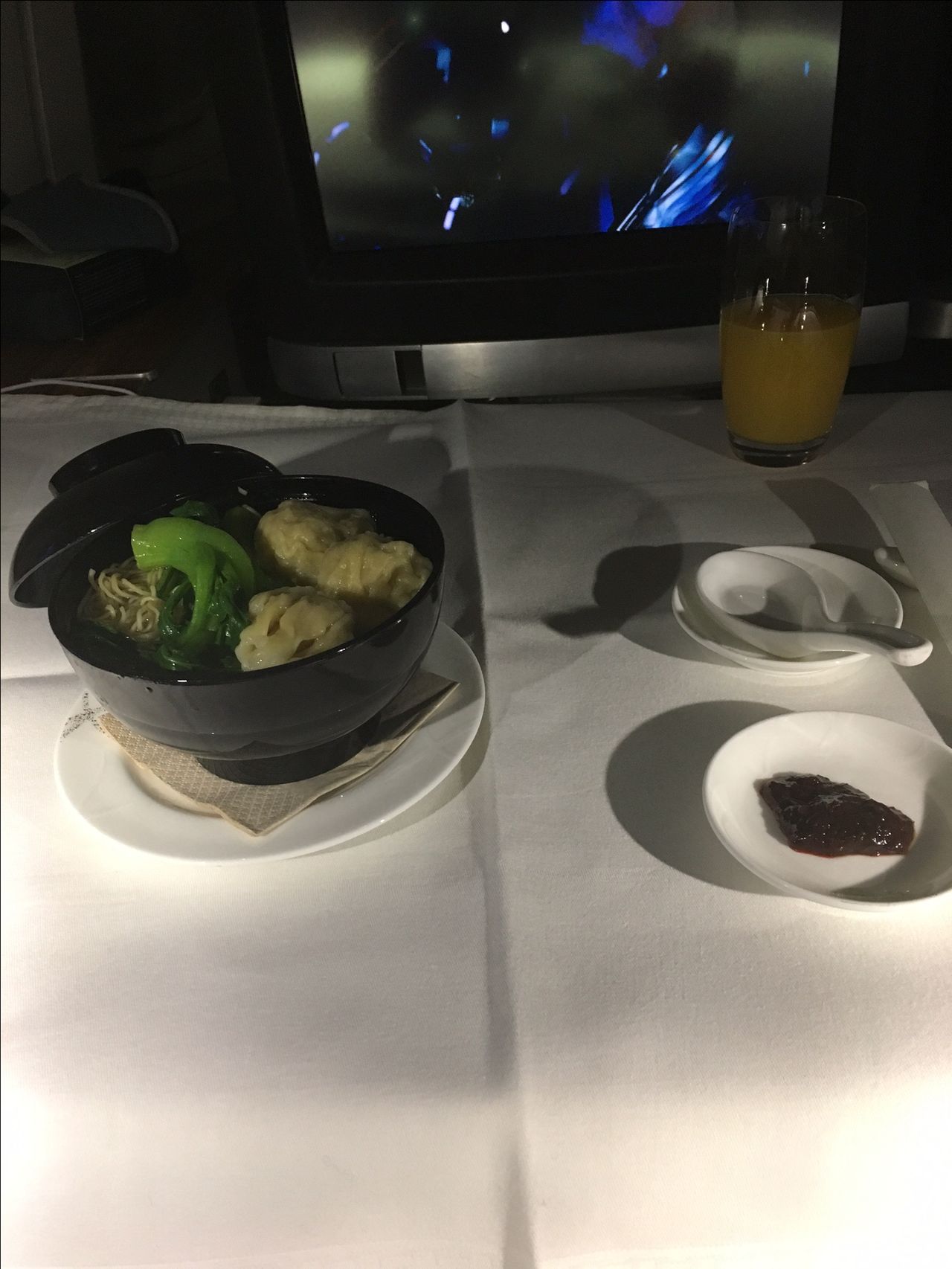 Landing:
We spent a while coming into Hong Kong, but eventually landed and taxied in at around 9pm local time. The crew wished me a pleasant journey and I proceeded to immigration. Immigration was pretty good for such a big airport. There was no "fast pass" for F passengers, but that didn't turn out to be much of problem. I was through immigration in 15 minutes. The signage in the airport is quite good, so it's easy for someone who is not familiar with it to figure it out and get to immigration/ bus stops/ taxis.
See more

Overall I really enjoyed this flight. Despite being around 16 hours long, it didn't feel like it at all and that's attributed to the great on-board product and excellent staff. The service on Cathay in F is really second to none and I found the attendants to be extremely professional and prompt, but were no invasive in any way. If I needed anything I would press the call button and they'd be there in seconds. Very appreciated.
In my opinion, this might be the most comfortable way to get across the pacific and can be an excellent use of Alaska Miles. I wouldn't hesitate to try this product again, if the opportunity presents itself.

The contributors of Flight-Report published 7 reviews of 1 airlines on the route Chicago (ORD) → Hong Kong (HKG).

The average flight time is 15 hours and 43 minutes.