#1 out of 72 Airlines A minimum of 10 flight-reports within the past two years is required to appear in the rankings. 458 reviews

By marathon SILVER 986
Published on 18th March 2018
This is the first in a series of vintage reports on a trip to Chengdu from Taipei, updated for these English versions :

Taipei’s main international airport is quite far from the city center which is surrounded by hills and mountains. The subway line was then still in the building phases, as exemplified by the steel shell of the future depot next to the airport; it opened at last in mid 2017, several years late.

At that time, the choice was therefore between a taxi (1300 TWD), the high speed train (185 TWD, including the fare for the shuttle bus) and an express bus (125 TWD) – divide by 36 to convert into EUR, at time of posting this. These options still exist today, but the subway (180 TWD) is now a better option for many passengers.
At that time, the high speed train was the only option which was immune to rush hour traffic jams on the expressway (morning and evening on weeekdays, and Sunday evening), with very similar comfort and overall travel time. There was no traffic risk in early afternoon on a Sunday, but the high speed line platforms were faster to reach from my subway line. I arrived at 12:26 pm at the ticket machines, bought a same day ticket without reservation and caught the 12:30 train one level below. Only once in the train did I check the destination of the train, because all stop in Banqiao, in the suburb: it would not stop at the airport and I alighted to take the next train ten minutes later. 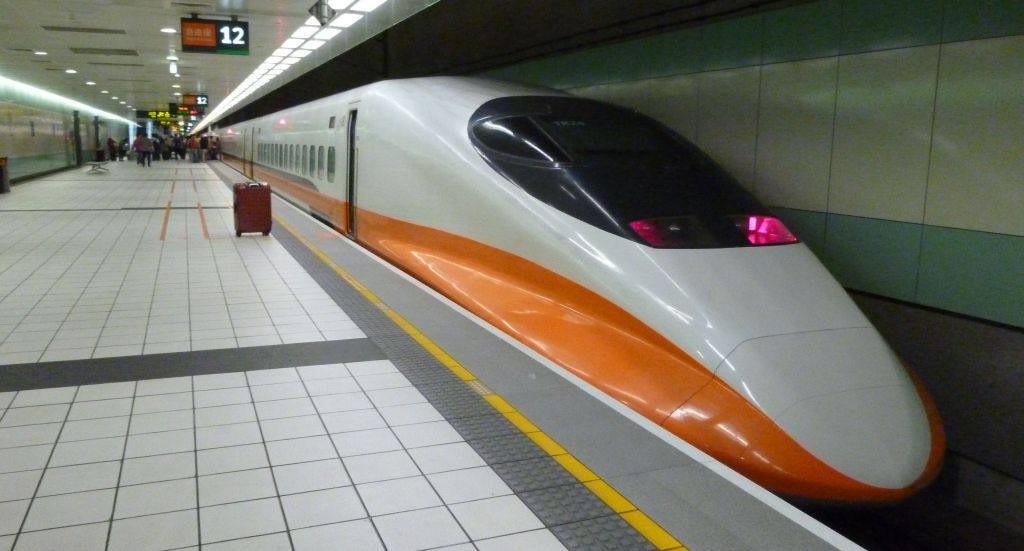 The design of Taiwan’s high train line is Japanese: the loading gauge of the Shinkansen is much wider than that of the European trains, which allows 2+3 seating, with a generous seat pitch because the seats are turned around at the end station in the direction of travel.

Arrival in Taoyuan: like most of the stations on Taiwan’s high speed line, it is presently in the middle of nowhere (there is a long term plan to develop the area), and you need to take a shuttle bus. This bus ride is the reason Bus 1819 from Taipei’s central station gets you in the same amount of time. It is possible to check in here, but only on flights operated by Taiwanese airlines.

The shuttle bus dropped me in front of Terminal 1, hardly more than 100 ft from the check in counters of CX. There was a special counter for passengers without checked luggage like me. The signage did not make it obvious, but Economy passengers could use it too. It did not really change much for me because not only was I flying Business, but it was very uncrowded.

The immigration control was as efficient and friendly as usual. A smile when I approached, another when the passport is given back: it costs nothing and this is a plus for Taiwan’s image. I wish the policemen in CDG understood that, and they still have a long way to go at time of posting this English version of the report. 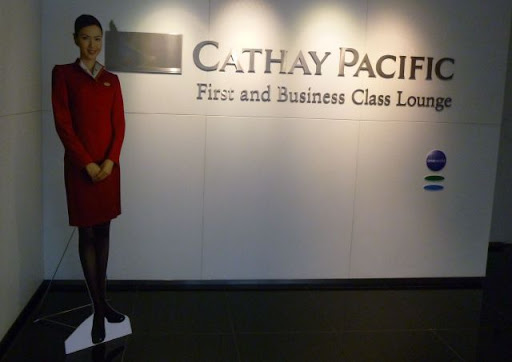 The lounge of CX in TPE was not huge ; it was relatively empty when I arrived and filled progressively but did not become overloaded. 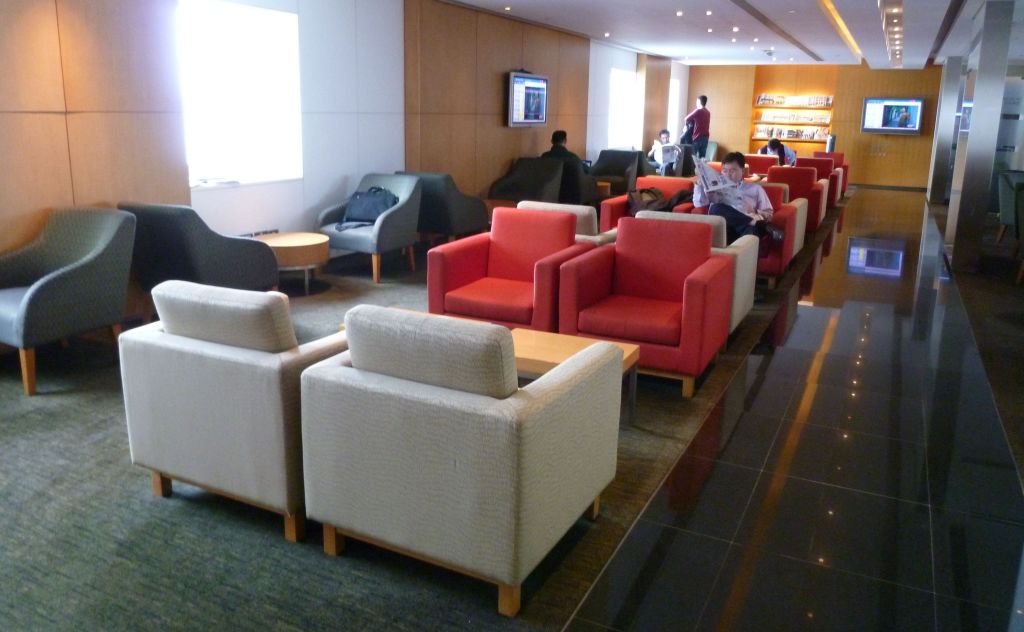 Taipei is actually a non-negligible secondary hub of CX, for political reasons. Mainland China efficiently deters many airlines from serving TPE, as part of it bullying of Taiwan: the only European airline serving TPE was KLM then (Air France will start serving TPE in April 2018 – I wonder if they set up a face-saving subsidiary like KLM Asia).
Mainland China had no objections to flights between its territory and Taiwan (dubbed “regional flights” to not call them international), but they were few back in 2011, and the real hub connecting Taiwan to the west was HKG. Hong-Kong’s CX, together with Taiwan’s CI and BR operated an air bridge of twin aisle aircraft shuttling between HKG and TPE. 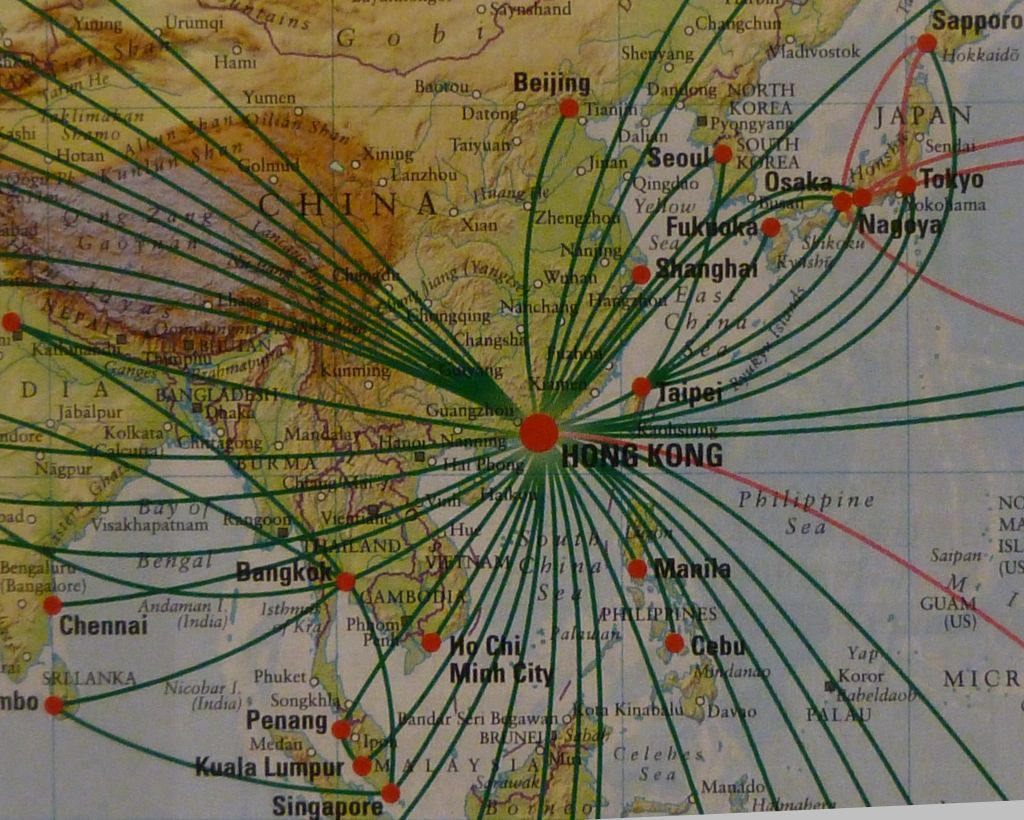 A minor detail: power ports of Type B (used in Taiwan, center left) and Type G (in use in Hong-Kong, center right)

It was no really time to have lunch anymore, but there was food. The choice was limited…

… but you have to take into consideration this counter where a cook would prepare you a Taiwanese soup on order; these soups can be a full meal. 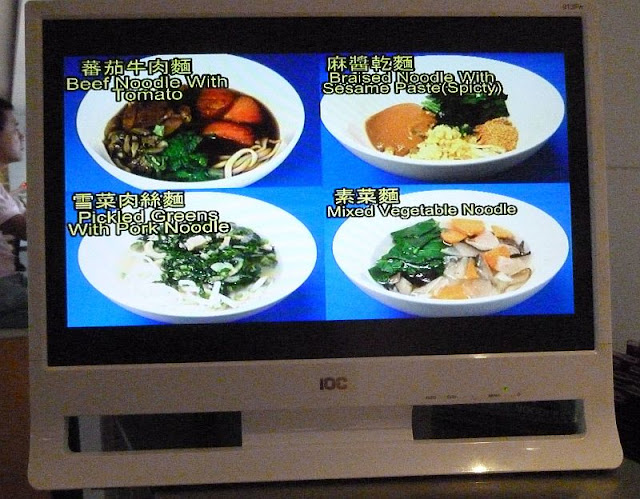 Free access wifi of course, and self-serve computers too. My main reproach was the worthless view on a service road, and piped music that I would have happily done without. 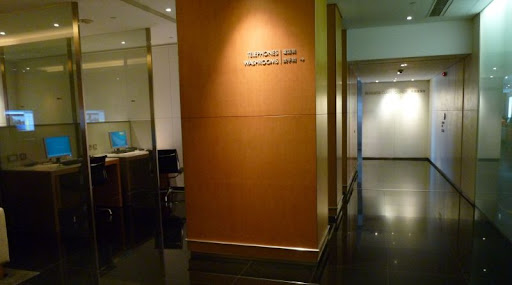 It was time to leave the lounge; note the design of the elevator down to this gate. CX limits the weight of carry on luggage to 7kg, of standard size, but this gauge in the foreground on the left did not seem to be often used (there was one at the check in counters too): CX is no LCC!

Boarding using to jetbridges behind this monk was was probably a frequent flyer because he was not flying Business. 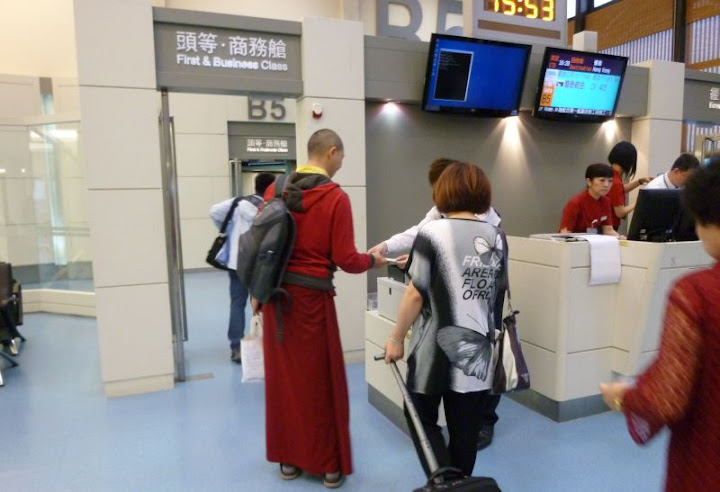 The livery of the aircraft was identical to that of this other 777, photographed here upon arrival in HKG.

The CX corporate color of the seats did not creat a cheery environment, but they were comfortable. 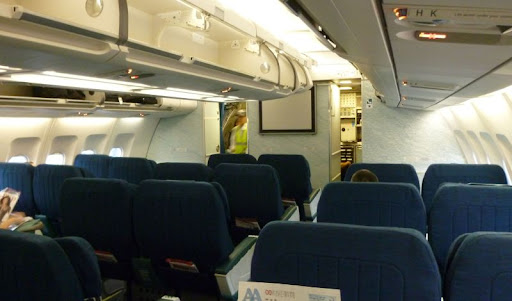 On the other hand, the cabin was densified and full in Economy 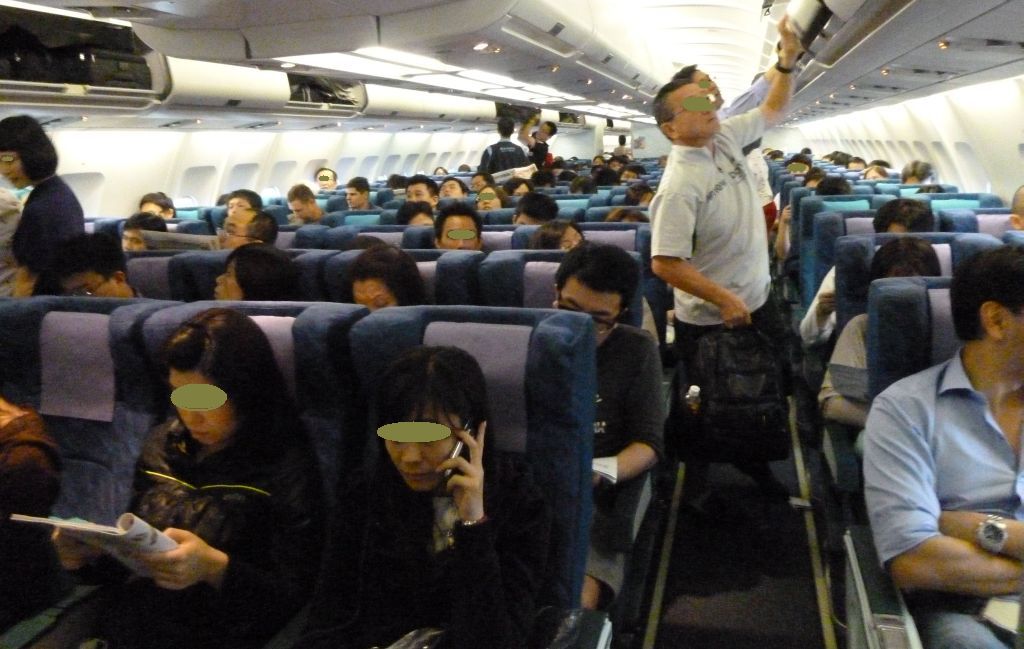 The IFE was outdated, with a tiny low image quality screen but the flight was much too short to watch a movie anyway.

On the other hand, I liked the stark colors of the FAs’ uniforms, and not wearing an apron for service helped keep this elegant look during the whole flight. 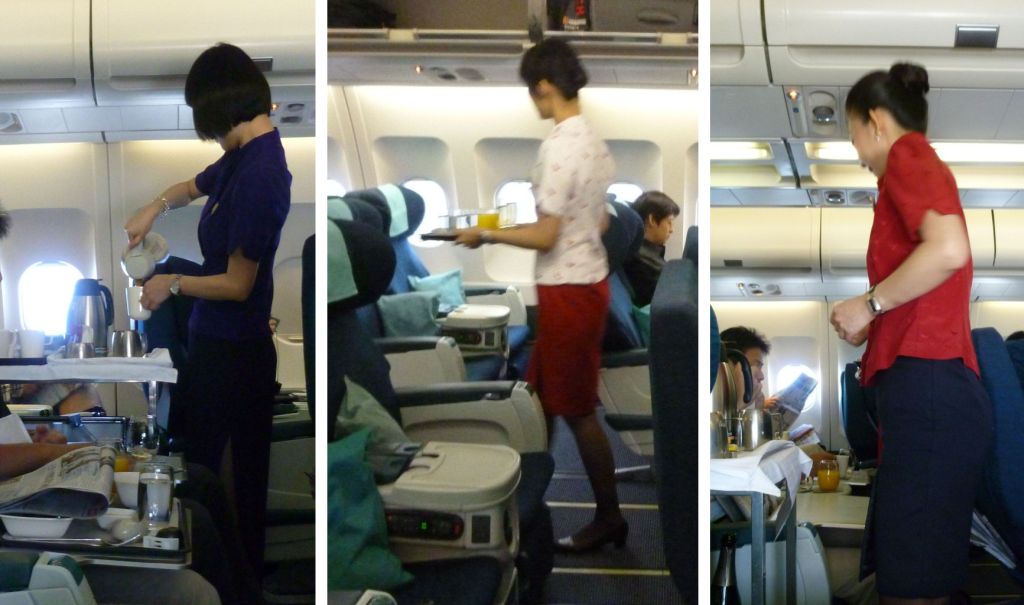 Typhoon Aere had passed off the coasts of Taiwan earlier that week, which had resulted in three days of continuous rain: not ideal conditions for plane spotting :
Philippine Airlines A330

Cathay Pacific A330, hiding the oversized Taiwanese flag in the middle of the terminal

This one was easy to identify

This is a fake control tower, part of the small Aviation Museum (to be placed very low in your priority list, IMO) The observation deck is too far from each runway in good weather. In bad weather like that day, it would be a total waste of time.

The weather was as of course much better once aloft.

The TPE-HKG flights were always 1h40’ long according to schedule, but usually took 1h18’ flight time, the rest being taxi time and punctuality margin. That required an efficient crew to deliver a full service : a welcome drink (orange juice for me, champagne available – or was it sparkling wine ?), a rather tepid oshibori and a choice between two hot meals. 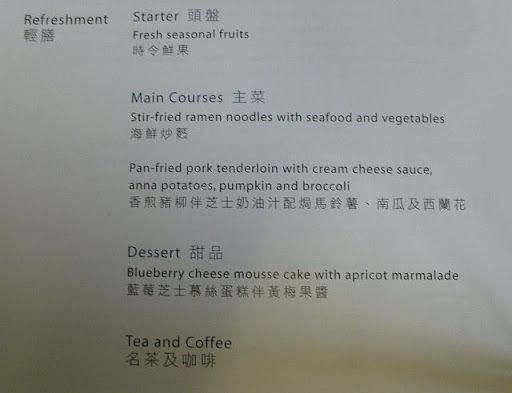 The offering of drinks

The pork meat was perfectly cooked, not hard as it can often be, like the bread. This was served with unending smiles and top presentation. 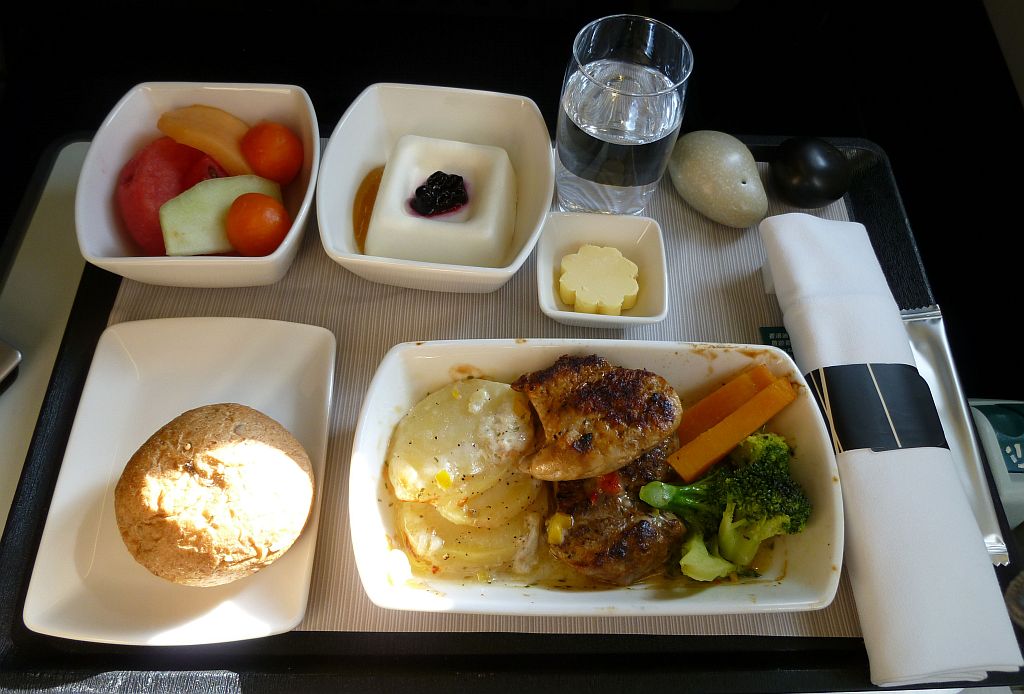 I asked if I could keep these rock-shaped salt and pepper holders: the way the FA refused with such exquisite courtesy that the scene could have been part of a training video. 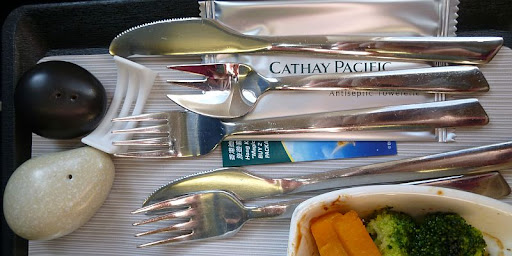 Touchdown at 16:00, precisely on schedule, and a reasonably short taxi when taking into consideration the size of HKG.
It was as too often very misty in HKG; I had asked and obtained a window seat on the right, the correct side for a view of the city, but I saw nothing of it during the descent, and the pictures during taxiing are so-so.
Hong Kong Airlines A330-200

A Cathay Pacific aircraft taking off 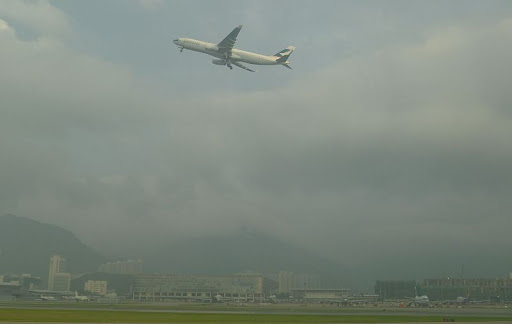 A ground staff at the end of the jetbridge held a sign indicating the gates for the connecting CX and KA flights for the passengers of this flight, including my flight KA824. 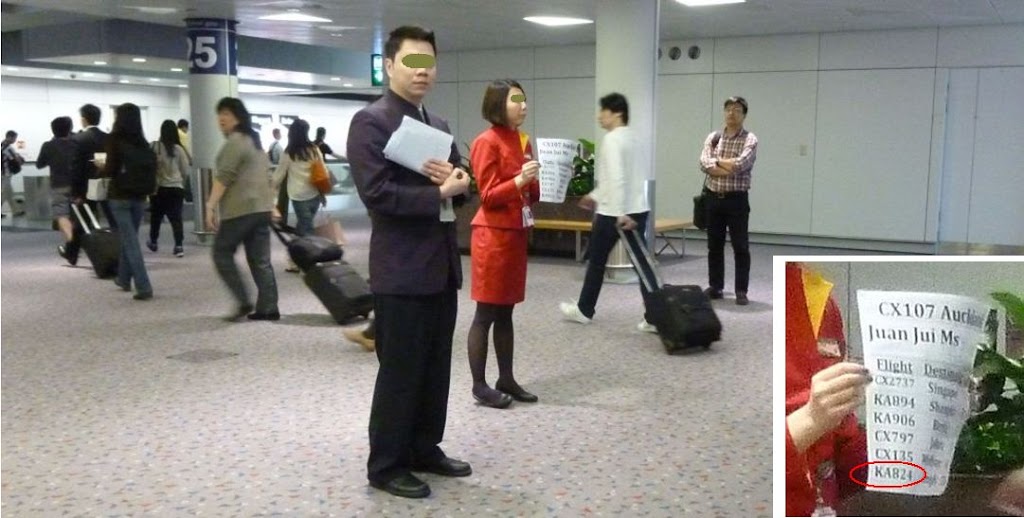 It would have made sense to include the description of Cathay Pacific's lounge in HKG in this report, but Flight Report does not provide the option to describe a lounge at the destination.
For the end of this description of this travel in J with CX, see the next report!
See more

This was by far the shortest flight operated by Cathay Pacific out of HKG. On this atypical route for a mainly medium and long haul carrier, CX was up to their excellent reputation.

The contributors of Flight-Report published 55 reviews of 4 airlines on the route Taipei (TPE) → Hong Kong (HKG).

The average flight time is 1 hours and 50 minutes.