This Flight report begins at Gate 4 where I received a boarding pass for the CX flight on which I had been reprotected, due to the delay of Flight KA821. A short stroll to the bifurcation between the directions to immigration (with looong lines as usual), and the security check for connecting passengers (as fast as on the way in). That is where I realized on one of the information displays that my flight was at gate 67, one the furthest away, estimated at 20 minutes from there. 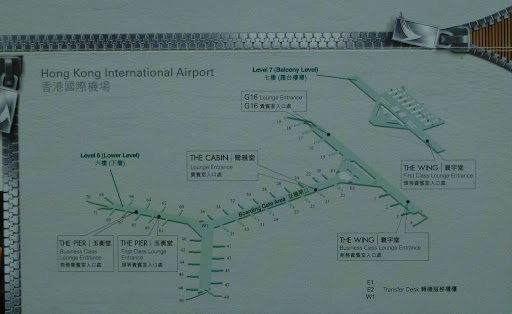 It was actually a pleasant walk because the weather outside was nice and the end of the day light conditions favorable for taking some pictures. 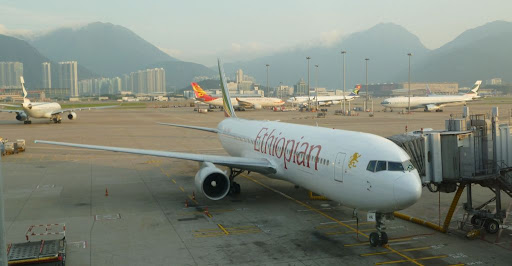 Hong Kong Airlines A330-200 in front of the skyscrapers of Lantau Island.

In retrospect, it was ironic to see Cathay Pacific commemorate on this A330 - the arrival in 1985 of a competitor which they fought vigorously before eventually taking it over ten years later.

Final call for Flight CX402 to Taipei: I guess this one was full.

An Air India 777 climbing out of HKG 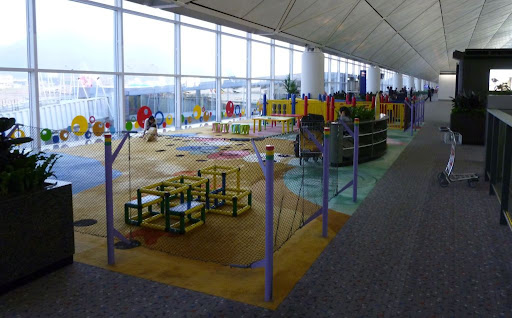 Adults have reclining seats for taking some rest. 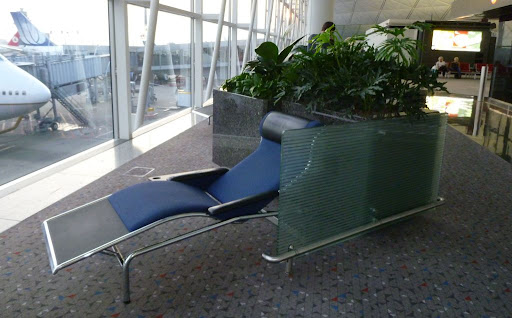 Two different United liveries for these 747s. Note the custom design sunshades of the first one 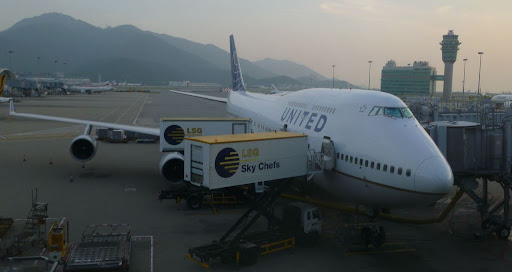 Walking around in the terminal did not leave me much time to visit The Pier, another of CX’s Business class lounges in its hub. I found it less unusual than The Cabin that I had experienced on the way in.
However, there was just as much space, and just as few passengers.

I did not try the food and only took a coffee, because my priority was to check my e-mails and check updates on Flight Report which was then out of reach behind the Great Firewall, i.e. Mainland China’s internet censorship which had grown doubts about FR’s political correctness. One country, two systems: I was in Hong-Kong and was back in uncensored internet. 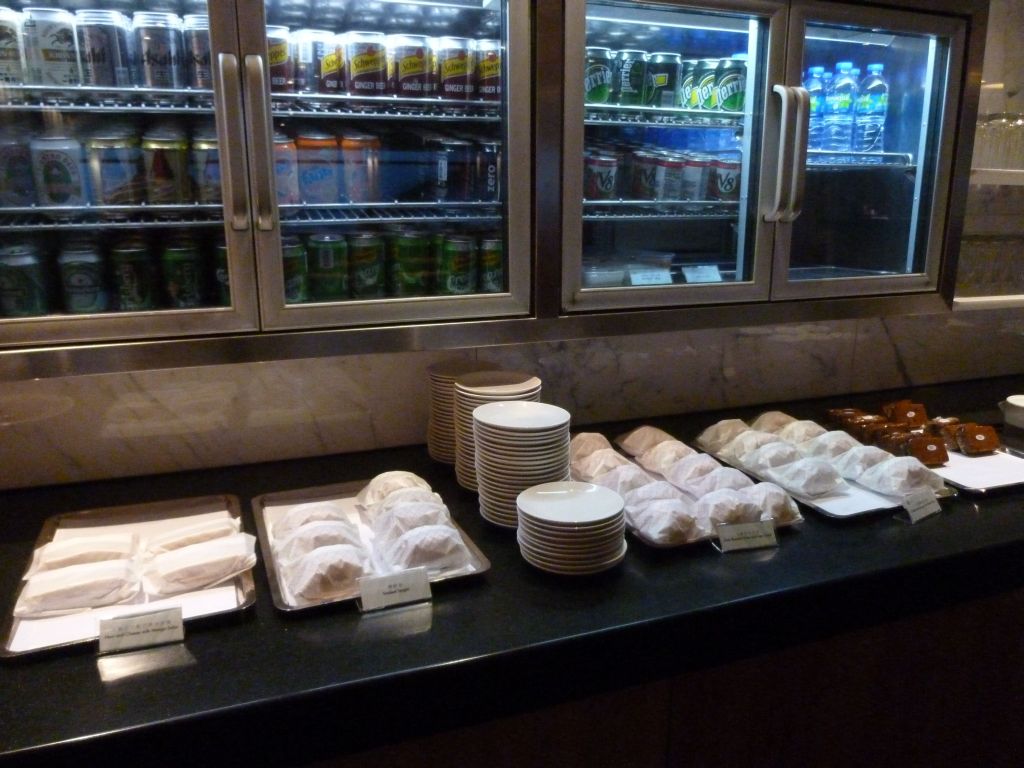 Boarding : there was a dedicated J/Elite access, with no waiting : the flight was nearly empty in J. 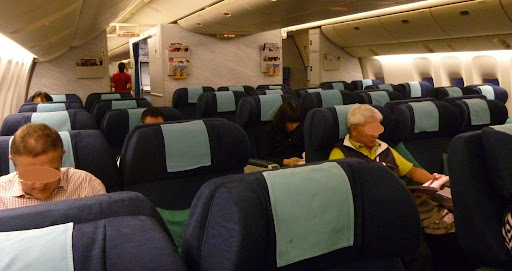 It was now dark in HKG

A detail of the seat

The FA on the way in had struggled a little to read my name on the PIL discreetly put on her trolley to address me by my name. There were so few passengers in J on the way back that this time, the FA managed memorizing it before using it (with a creative pronunciation, but I did not blame her for that). A nice detail showing care; no AF flight attendant ever considered doing the same, even with Platinum status, then and now. 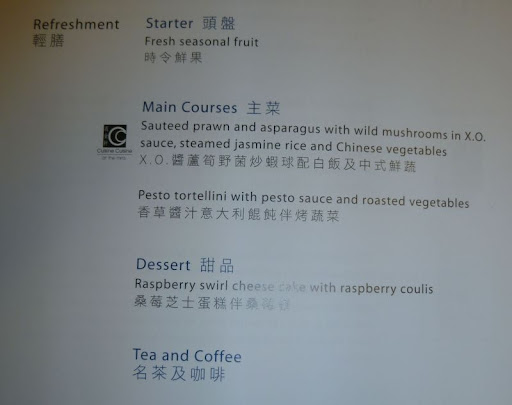 I chose the prawns option: the whole meal was excellent, like on the way in. No, this was not a glass of wine, but tomato juice. But do not worry: there were supplies for C2H5OH addicts, at various concentration levels. 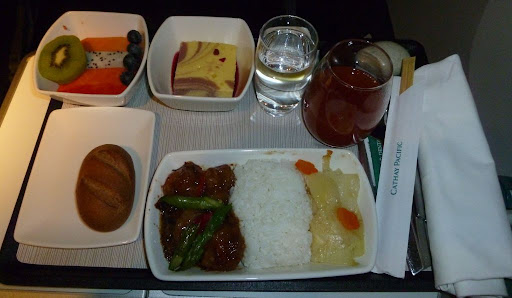 I was taking a picture of the trolley, reassuring the FA that she was out of the frame. But no problem, you can take pictures of us! She called her colleague and gracefully posed together, a welcome change from the usual picture shyness of flight attendants of most other airlines. They were Hongkongese and Malaysian, respectively, and chatted amicably in English, and then in Mandarin, despite the short duration of the flight. 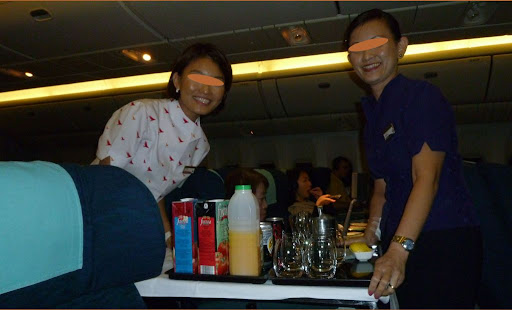 Like on the way in, the captain announced a 1h18’ flight time, which showed that CX had included 22 minutes of margin in order to be on time. Landing on time, therefore; going through the immigration was even faster than usual because I now had an ARC (Alien Registration Certificate, i.e. a resident card which was going to mean dedicated channels with zero waiting)

It was late enough to take the bus to the city center, because it was likely to be faster than the train. Walking in the corridors, buying a ticket, departure of the bus: it was all going to be very fast, and I was in front of Taipei’s central station 59 minutes after touchdown. 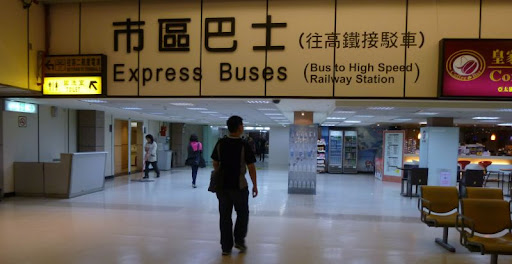 There was nothing wrong about this flight, apart from the fact this was not the one I had planned to take, due to the late arrival of my previous flight.
Flying business on this short route is actually a needless luxury, but why not enjoy it if you have a chance?