By marathon GOLD 761
Published on 18th March 2018
This is the first leg of my return trip on this business trip to Chengdu:

I arrived very early at Chengdu airport, around 11:30 am, i.e. slightly before checking-in for my flight would begin. It was very hot and misty and four international flights scheduled between 7:30 and 8:00 am were still boarding, which did not bode well for my own flight.

This gave me some time to have a look landside. There were actually few international flights out of Chengdu, even though this is a regional hub of Air China and of course the base of both Sichuan Airlines and Chengdu Airlines (with regards to immigration, flights to Hong-Kong, Macau and Taiwan are international flights)

Hardly any shop, very few passengers on the international side, whereas it was an anthill on the domestic side. 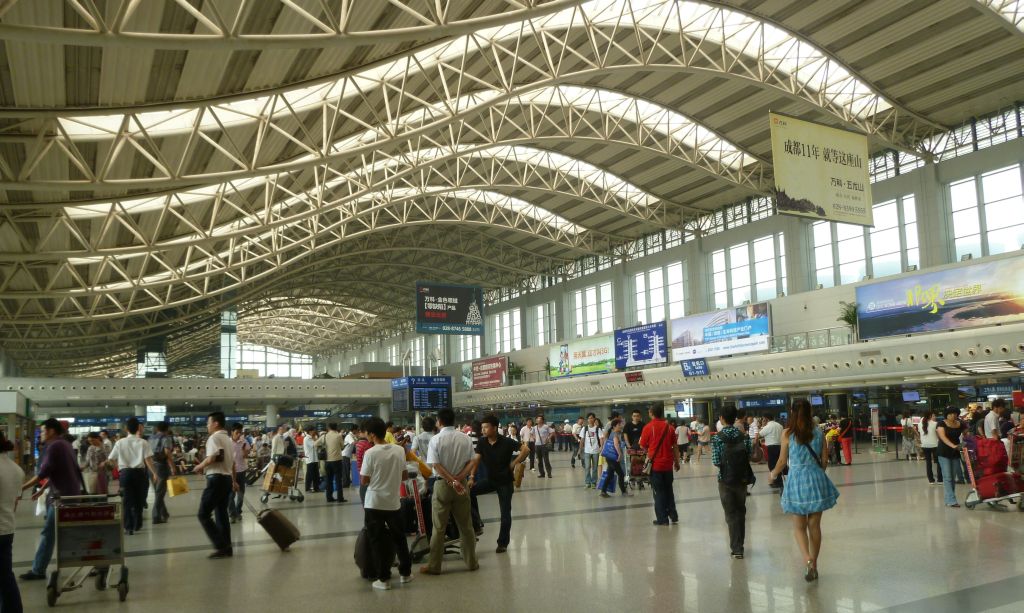 There were self-checking machines for passengers without checked luggage, a rarity in China at that time. I remember the time when they did not accept foreign passports. 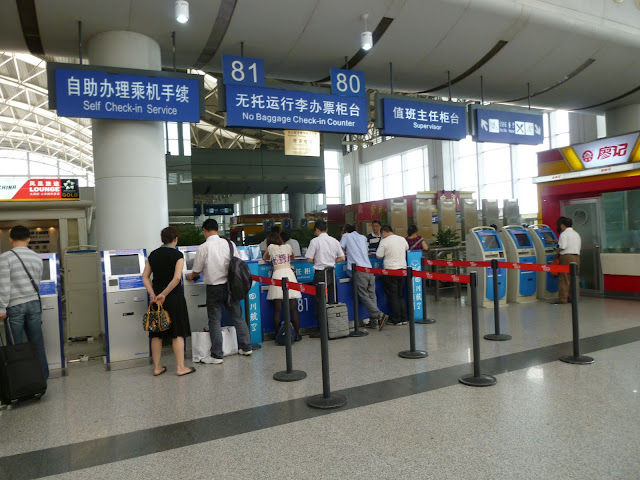 This fruit shop may surprise a foreigner: it is customary to offer fruit when you are invited in a home or visiting your family (offering flowers is possible too). 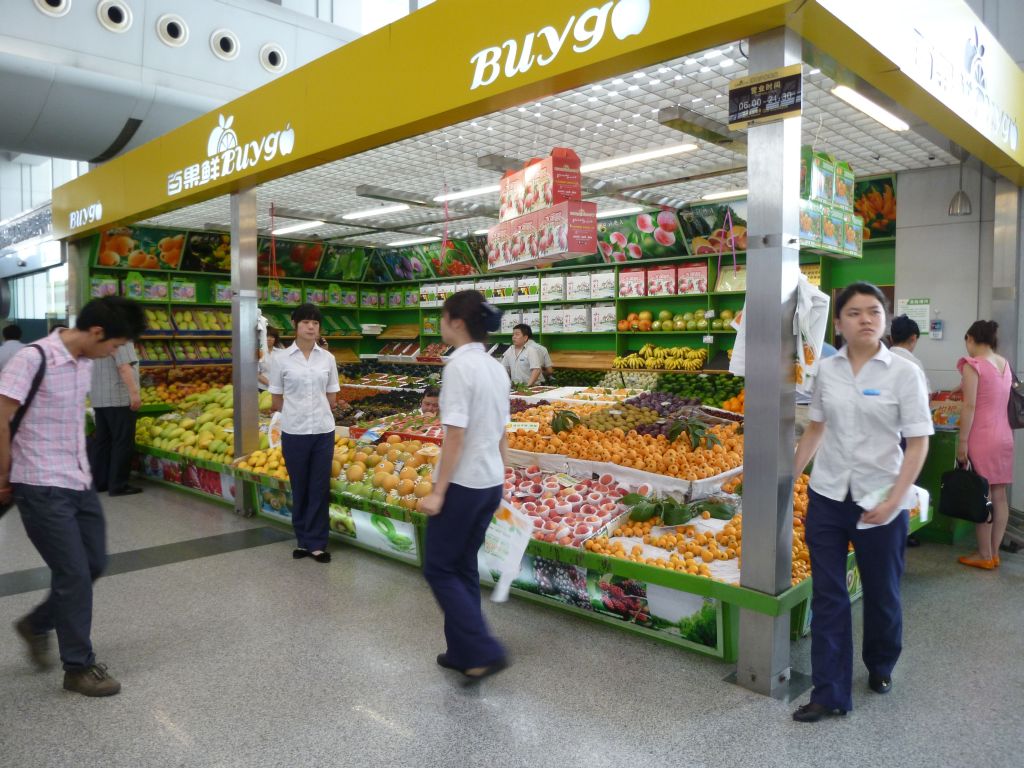 At the time of Chinese New Year (late January – early February) which is the main family gathering opportunity in China, you can see everywhere sellers of lucky red and gold cartons of fruit, like for instance those of this passenger. 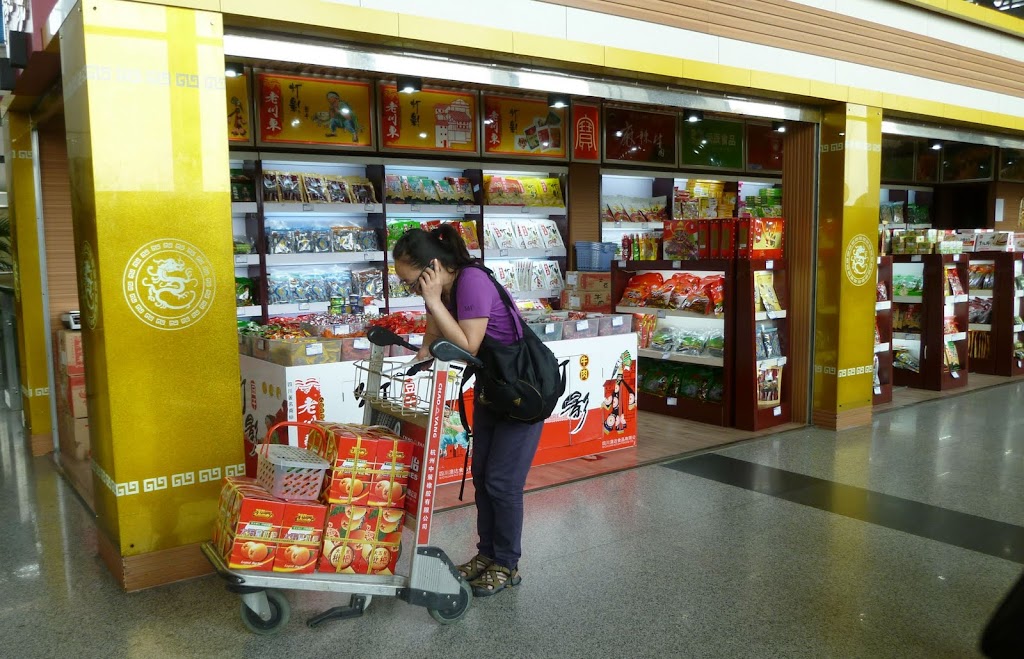 There were very few passengers when the check-in counters for Flight KA821 opened.

There was no rush either, because as I had feared, it was late. One hour delay according to the sign top right. 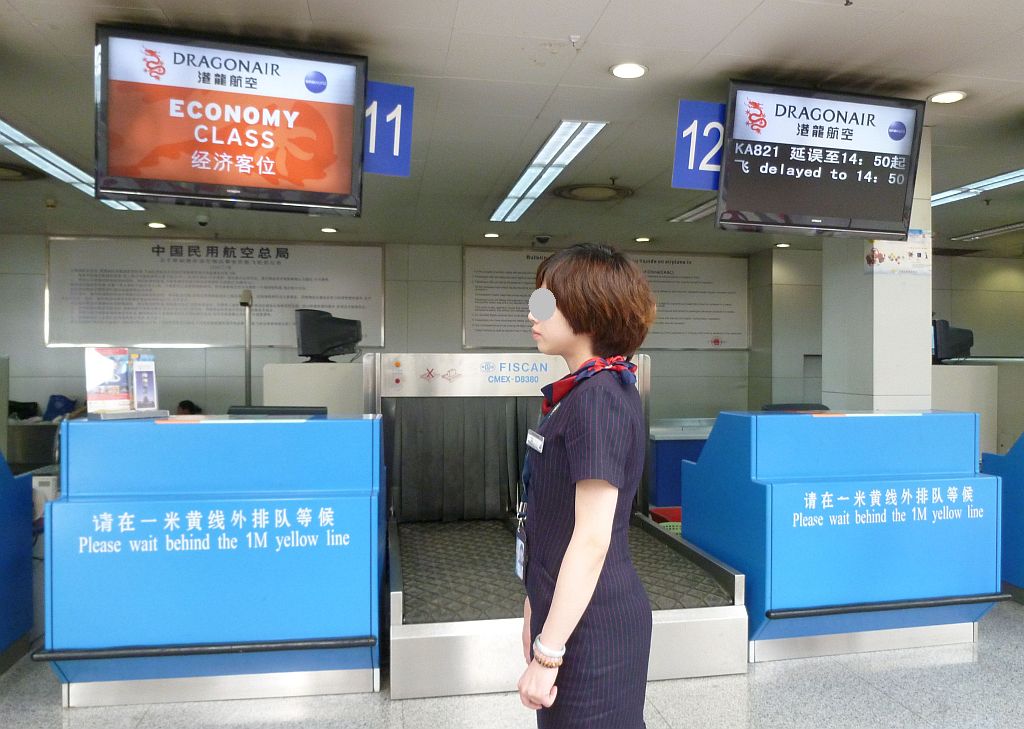 There were more people checking in for KLM’s flight which was scheduled at 16:00, but would be late too due to the late arrival of the aircraft.

One international flight per hour did not overload the various checkpoints, which were nearly empty. There was nobody at the customs.

Well, no, there was this female customs staff slightly further to the left. She did little to hide her boredom.

Her name was in English and in Chinese on a badge pinned to the lapel of her Chinese immigration police uniform: I gave my passport and BP to Ms. Ding Chun, a comely lady in her forties, with a hello in Mandarin. She answered with a great smile in Mandarin too, did her work quickly and returned my travel documents with a lovely smile and Bon voyage ! (“Have a good trip”, in French). I have always had a very friendly welcome at the Chinese immigration (and an even more friendly one at the Taiwanese immigration, by the way), and wish it was the same in my own country.

Since I now had two spare hours, without lounge access, I had a look to the duty-free shops. There were panda dolls, unescapable in Sichuan, as well as the remote controlled helicopters which were ubiquitous in Chinese airports, from Beijing to Lhasa.

What was more unusual were the two Tibetan souvenir shops. Few people know that the historically Tibetan area is extremely vast, ranging very far to the north-east beyond the present Tibet province, and encompassed in particular the western half of Sichuan. (At time of flying, this area had been recently closed to foreigners because of the bloody suppression of riots in Aba).

I had serious doubts on the authenticity of the items proposed in these shops (there are lots of fake in Tibet too), and the employees were as Tibetan as I am Chinese. Wearing the elegant multicolor apron of the traditional Tibetan dress did not change their unmistakable Han faces.

The very misty weather did not help plane spotting, apart from these Sichuan Airlines planes.

And this Canadair Challenger 601 registered in Macau and owned by Stanley Ho, the multi-billionaire head of the Macau gambling empire. Back in 2011, it could take up to ten days to obtain (or not) the validation of a flight plan in Mainland China for a private jet, but he probably could pull strings at the highest level to not waste time. 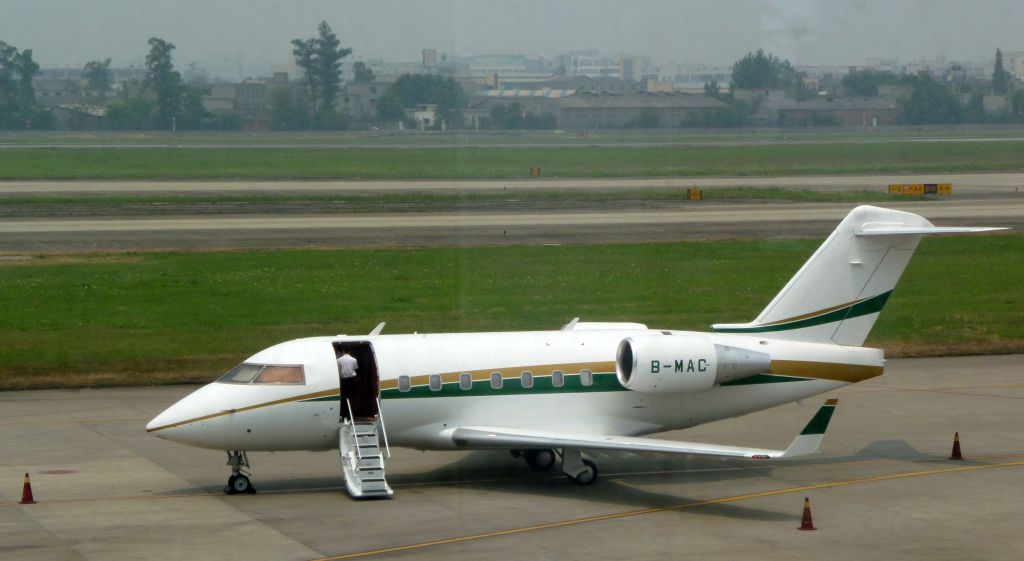 Since I was no VIP, I was not going to board in this kind if aircraft and spotted the Dragonair A320 parked in the distance. It was going to be a bus transfer, but punctuality was already a distant dream anyway. 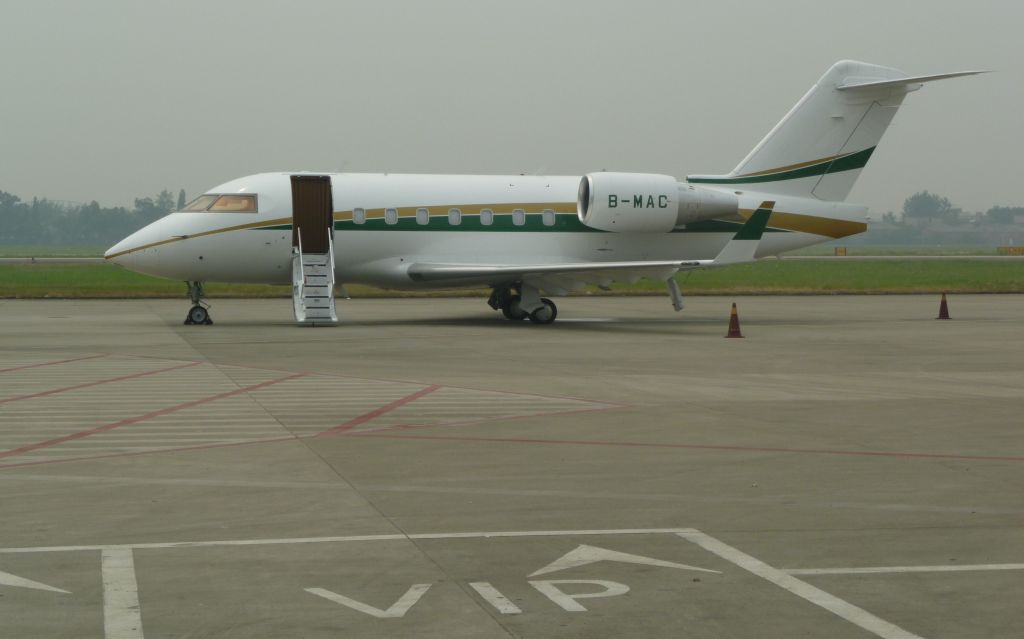 CTU was neither PEK nor HKG, the few power ports that I found on the walls of the vast boarding hall were not powered, but I found a powered multisocket under the counter at a gate where no flight was planned. The Chinese had no qualms doing the same; I even once saw one disconnect an advertising display in order to recharge his own device. 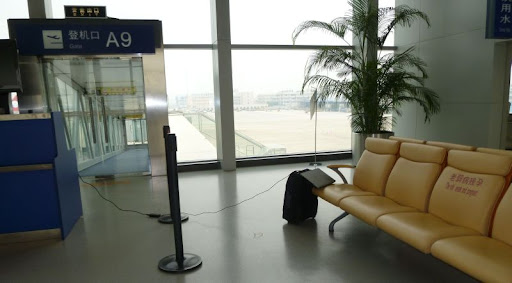 There was a small room just behind on the right, where passengers could resupply their bottles of cold, lukewarm or hot water, or use small single use paper cups.

More passengers had arrived in the boarding room, but there were still seats left, and space to lie down too, i.e. not enough to fill the KLM 747 which was going to arrive when I was soon to board. 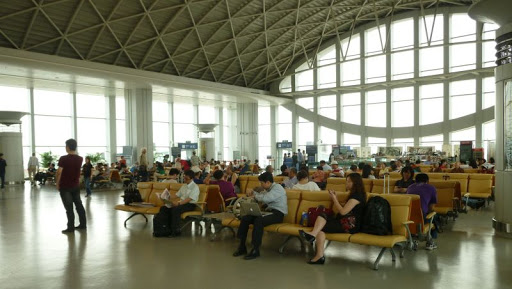 The crew of Flight KA821 (two pilots, one male and five female flight attendants) had arrived, but was waiting too.

Boarding by bus – the Dragonair A320 is full 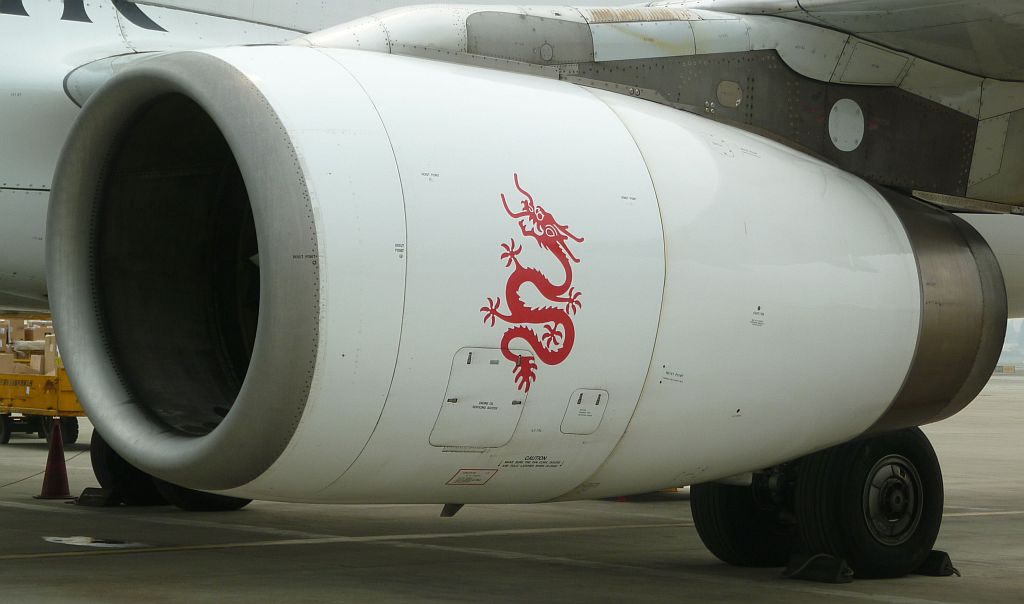 Like on the way in, there was of course no IFE screen, and the safety demonstration was therefore done the old way.

Announcement by the captain offering excuses for the delay of our flight, “due to the late arrival of the plane and the insufficient equipment of Chengdu Airport” (quote), and announcing a departure within ten minutes and a 2h10’ flight duration.

My neighbor worryingly asked a FA about her connection, which gave me an opportunity to start a conversation with this pleasant Thai passenger who spoke fluent Mandarin – this was the language she used when she called her husband. She had still chances to catch her flight to Kaohsiung, but I already knew that my chances to catch the 17:45 flight to Taipei were thinning out.

Distribution of glasses of water, and another announcement by the captain : it was now the Hong Kong and Guangzhou airspace which was saturated, and we still did not have a departure slot. 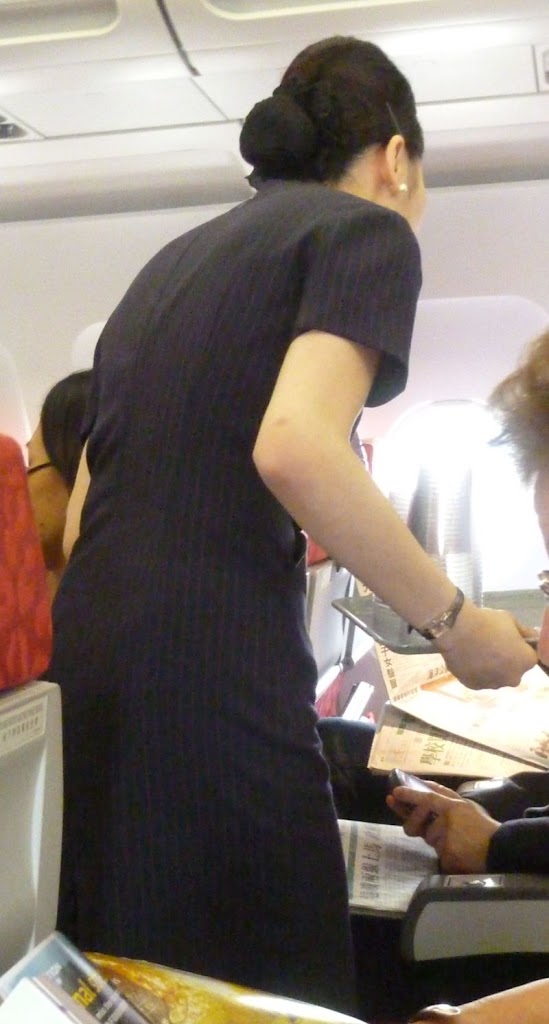 15:36 : the plane pushed back, but nothing happened during another ten minutes. Only at 15:50, i.e. exactly two hours late did the plane take-off. Forget about my connecting flight in HKG to TPE!

Taxiing was actually interesting through the variety of the planes seen on the way, with this China Eastern 737-800 in an unusual green livery which was quite different from the corporate color code.

Chengdu is famous in particular for being a major center of the solar cell industry, using very low labor costs in western China (due to the poverty of the countryside) and to the absence of real environmental constraints if you have enough guānxì 关系 (connections). Like Hanergy which can afford owning this corporate Gulfstream G550.

Terminal 2 was then being built and more than doubled CTU’s capacity when it opened in 2012. It now handles all domestic flights except those of Sichuan Airlines, replacing a much smaller terminal which handled only Sichuan and Chongqing flights.

A Shenzhen Airlines aircraft in front of the construction site. Shenzhen is the huge Mainland Chinese city at the door of Hong-Kong; domestic flights to SZX are much cheaper than flights to HKG because airport taxes are much cheaper, and I suspect that the airlines also take an additional margin on their HKG flights in view of the fare difference.

The plane took off at long last, and shortly thereafter came the meals, with the perennial choice between beef and chicken that I selected. The wine was the same as on the way in. 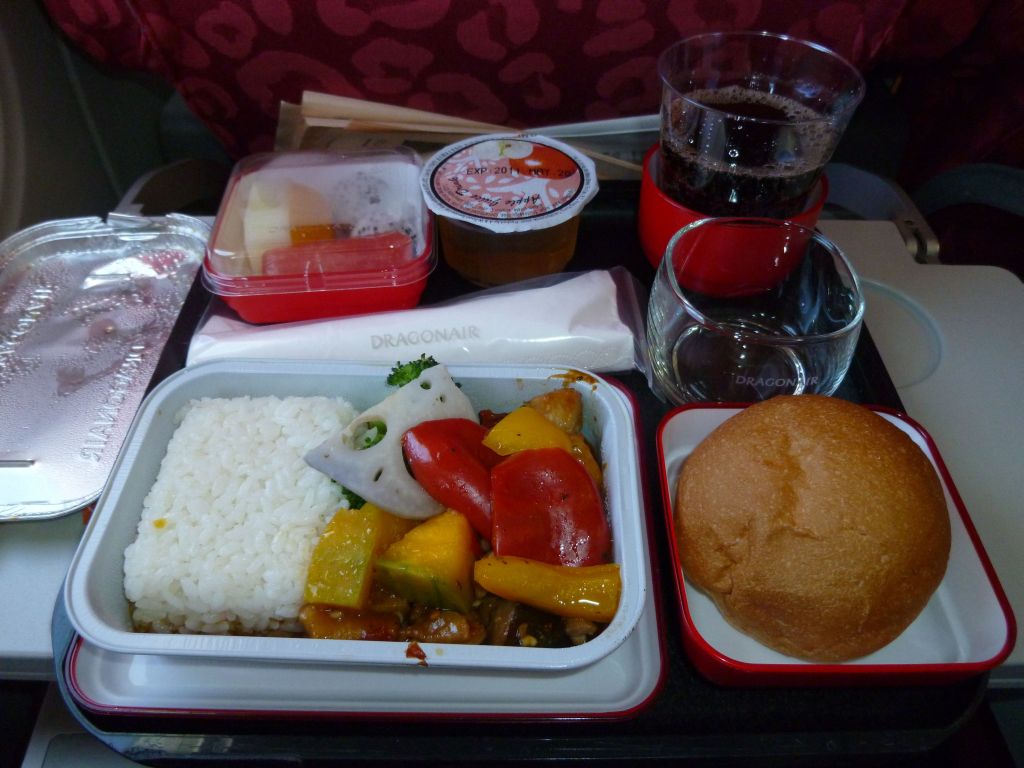 I found this meal simply delicious, way above what I usually had on Chinese domestic flights which are admittedly much cheaper. Should I remind my readers that I was flying in Economy.

The saga of the size of the portion of butter (hidden under the bread) between China and HKG or TPE continues : I had (in Economy) 5 grams on Air China, 8 grams on Dragonair on the way in, 10 grams on Chinas Southern… and 7 grams on the way back on Dragonair again. Who stole the missing gram on the return flight? 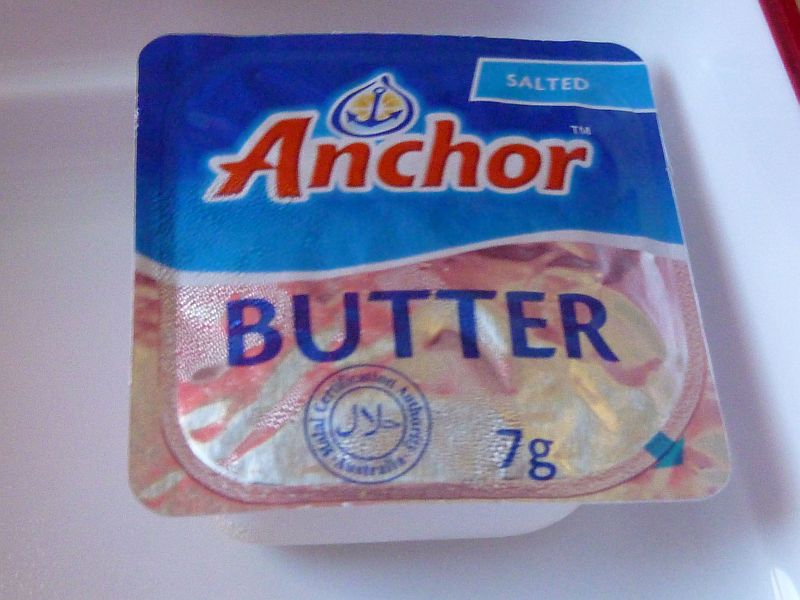 An unidentified A330, and the control towers of HKG. I find them quite ugly, compared to the terminals; I know airports where the reverse is true..

The China Airlines 747 reminded me that I was now only 800 km from my Taipei home. A short hop for this long range aircraft, but that provided the scale of the traffic between TPE and HKG.

A long taxi for our A320 and last turn… to a remote parking space. Desperate look of my Thai neighbor who saw her chances of catching her connection vanish due to the extra ten minutes needed for the one hundred meters bus ride to the terminal.

There was of course a long list of flights missed by the passengers of Flight KA821, and an impressive welcome committee to help them.

It was quintessential HKG professionalism: my boarding pass was already ready; only the boarding gate was missing, and it was easy to find on the FIDS. I counted 42 boarding passes, adding those which had already been distributed, I estimated that one third of the passengers of Flight KA821 had missed their connection and had already a seat on another flight.

I was not the only one who had missed a connection to Taipei, and I don’t know why these two Taiwanese passengers (nobody in China would transcribe his name this way in Latin letters) of my Flight CX470 were special. 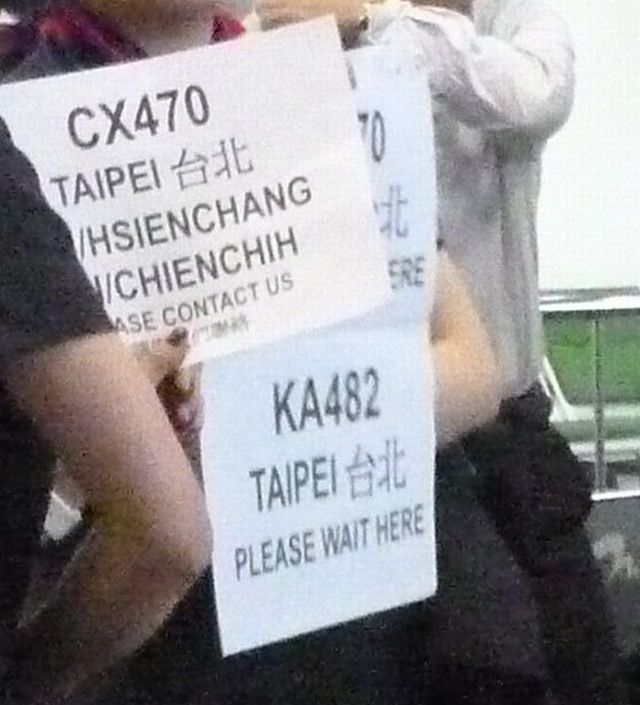 I had not worried much: there were so many CX flights on the HKG-TPE route that I was quite sure that I would make it home sooner or later. This was actually the reason why I had selected a connection in HKG, rather than Shenzhen or Macau that my company’s travel agency had also proposed. In hindsight, it was a good decision : there was for instance only one flight out of Shenzhen after the one I should have taken and it might well have been full.

This is the end of this report ; what followed is in the report of Flight CX646 where I already had a window seat, like on the flight that I had missed. I do not know if it was by pure chance or by design, but I liked it.
See more

My experience with Dragonair - now renamed Cathay Dragon - was one of bad luck : this was my third flight with them and two had been badly late due to the ATC. Apart from that, this flight was as satisfying as on the way in, with the bonus of a particularly good meal.
HKG deserved the top grade for services this time, in view of their handling of the passengers with missed connections.