#64 out of 77 Airlines A minimum of 10 flight-reports within the past two years is required to appear in the rankings. 91 reviews

It was time to go home after a 12-day trip to the US. At the time I made my booking, I was not sure of where I would end my trip so I by default I chose New York as a departure point. In a lot of ways it makes sense as it is in the middle of the northeast corridor (Washington-Boston) that I usually travel to when I visit the country. However, for those willing to pay extra, AerLingus also serves the state of Connecticut with a flight from Hartford's Bradley Airport.

My only worry was that since the journey will pass through by the Republic of Ireland, there will be no passport control stations at my arrival and I am someone who is particular with stamps on my passport for safety. But I will tell you a bit more on my next post.

JOURNEY TO THE AIRPORT

One thing I didn't anticipate was the traffic. Even if it was a Saturday, traffic problems surfaced at several points between my aunt's place in Connecticut and JFK airport: stalled vehicles, ongoing construction. The road trip lasted for more than two hours.

TIP: Download WAZE to tell you the best way to get from A to B. It uses user feedback to help compute the expected travel time.

I actually thought at first that AerLingus was stationed at Terminal 1. But when I saw the boards on the motorway, I was reminded of its partnership with Jetblue which meant we would go to Terminal 5.

We arrived barely one hour left. Lucky for me the queues at the bag drop were extremely light. I spent the last-minute transferring items between my hand luggage and hold luggage since I still had some unused weight in the latter and the former was apparently heavy. Even if I had a boarding card printed at home, the staff gave us another one. Once this was done with, I said my farewell to my aunt. 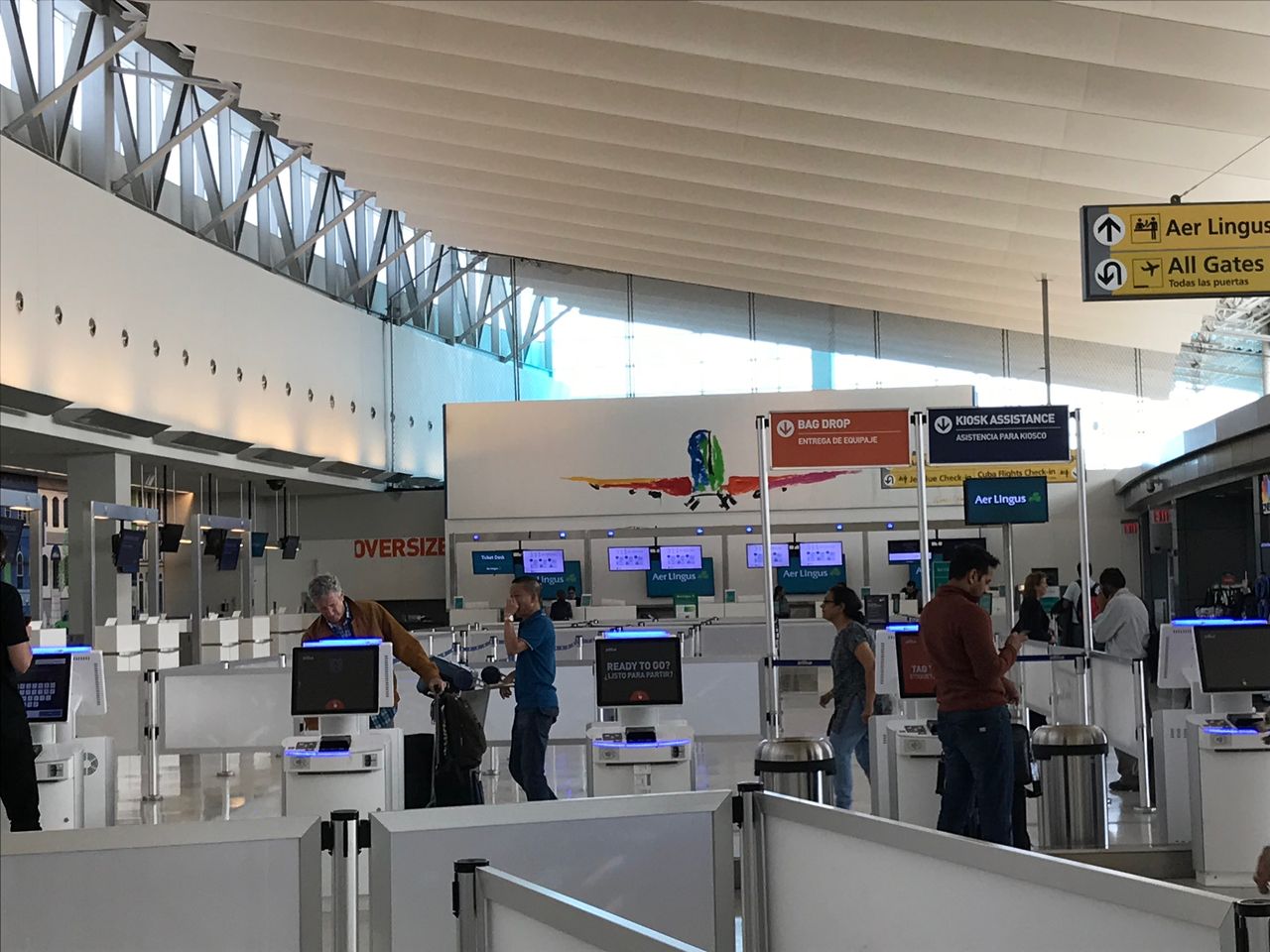 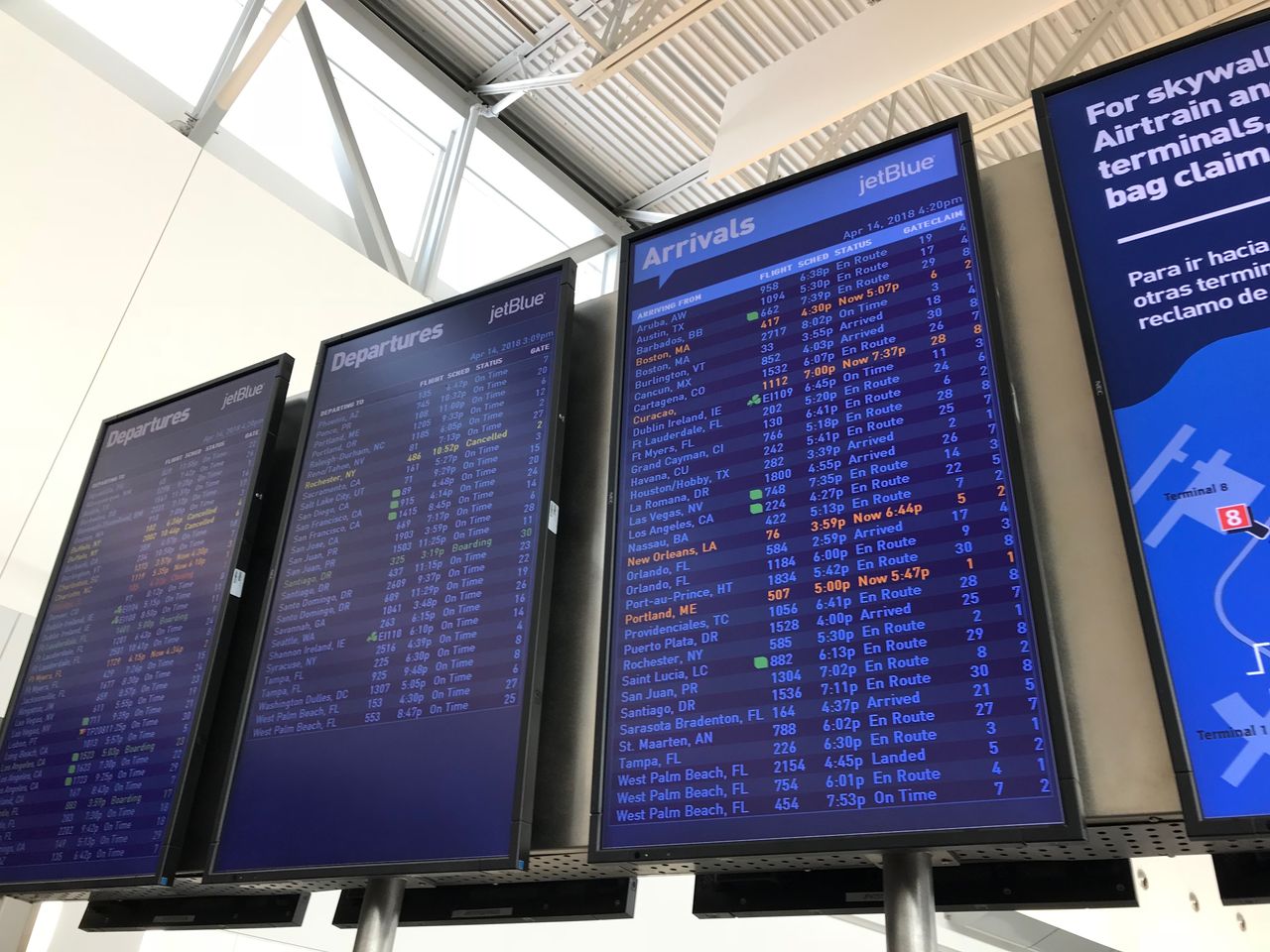 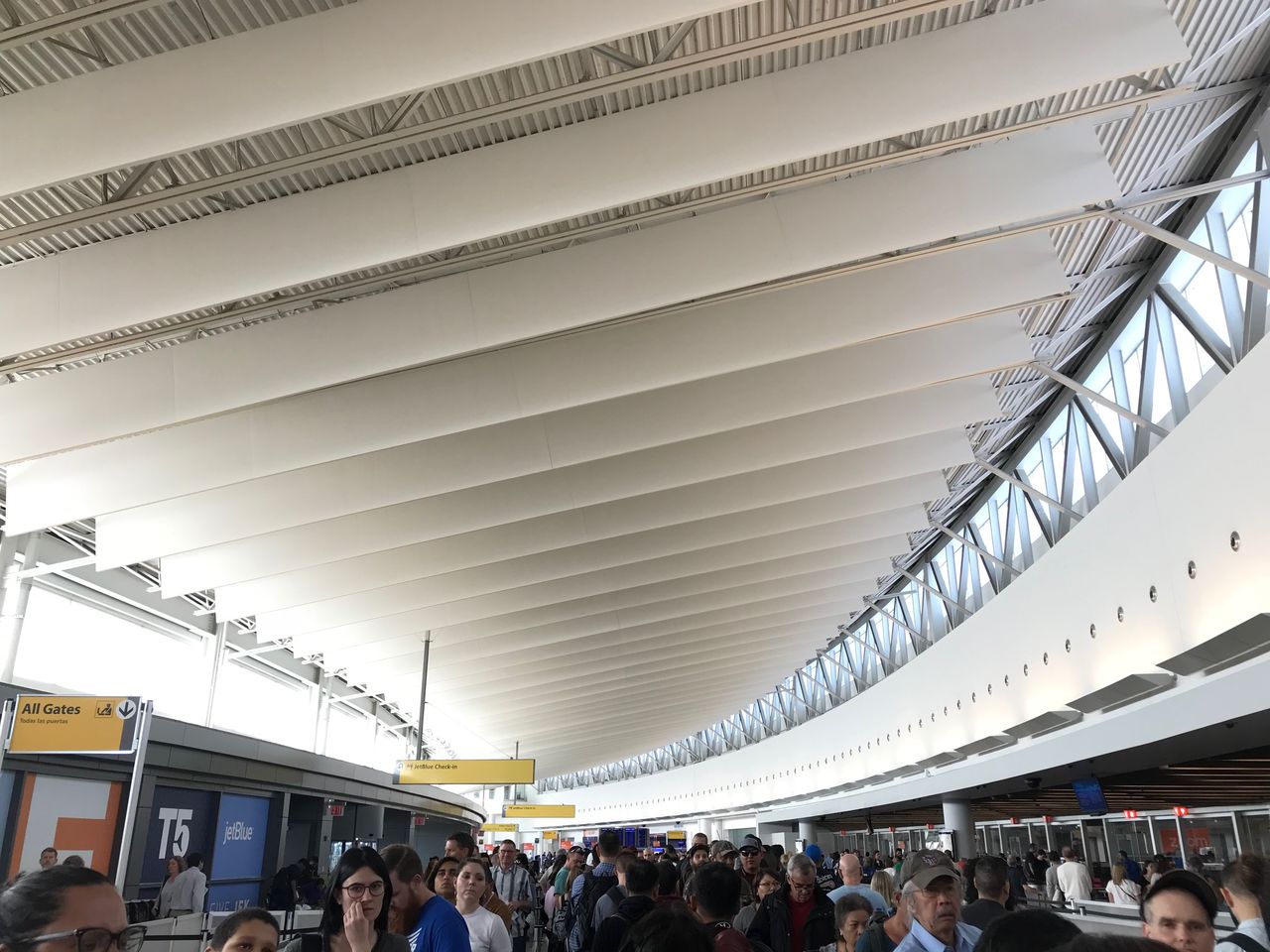 The queues at TSA security screening however were quite long as only three lanes (which includes an expedited TSA Precheck lane for eligible passengers) were open. It took me almost 20 minutes to clear it. As I had my documents scanned, another lane was opened. One of my bags was referred for further screening. But it was given back soon.

Despite the time remaining, I decided to take a few pictures since it was my first time to see this terminal of JFK. As I said in a previous post, in the US, air carriers mark their space all over their assigned terminals as if they owned the place. That is indeed the case in Terminal 5 where Jetblue is the dominant carrier. But it shares the space with partner carriers. 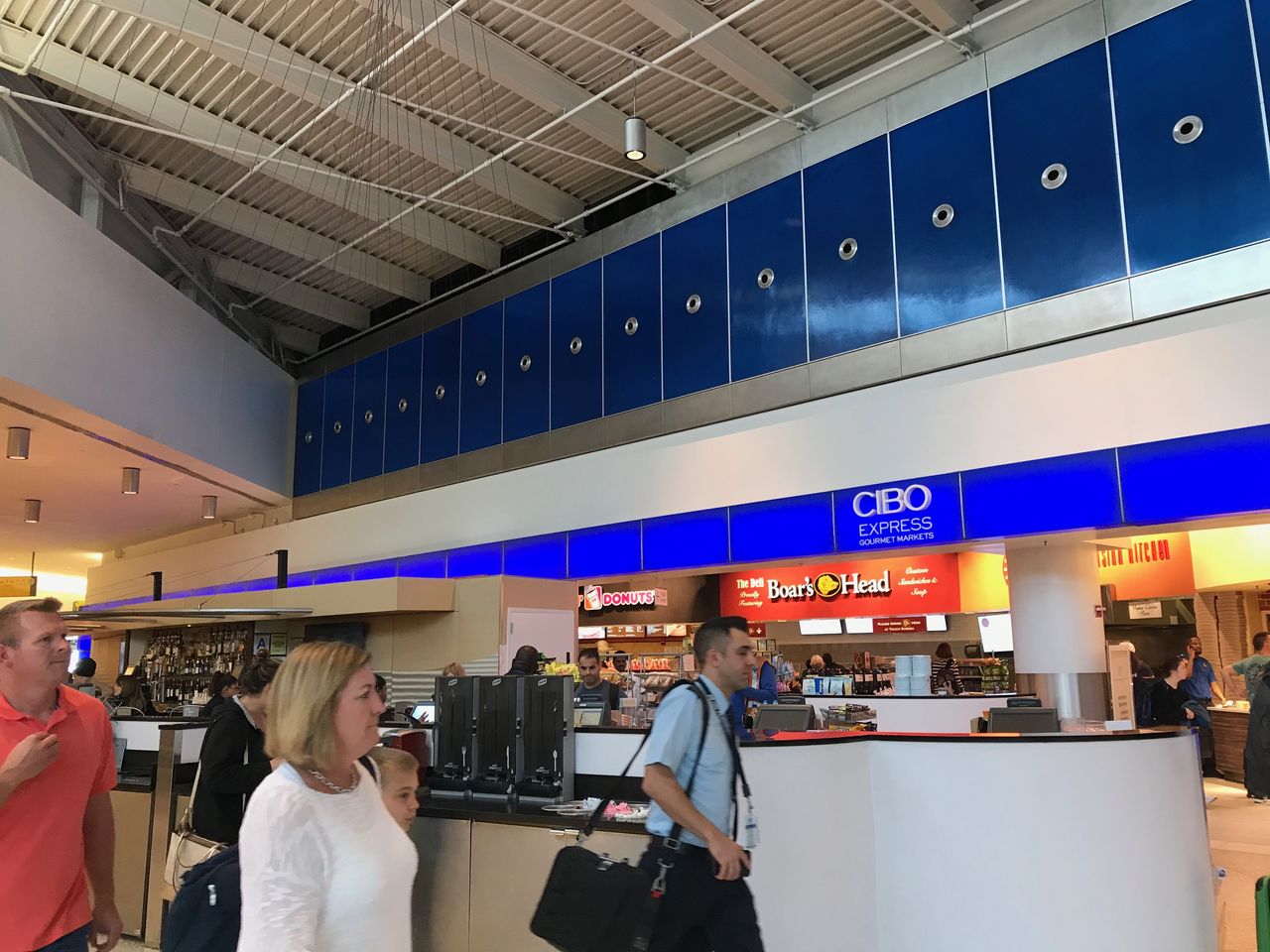 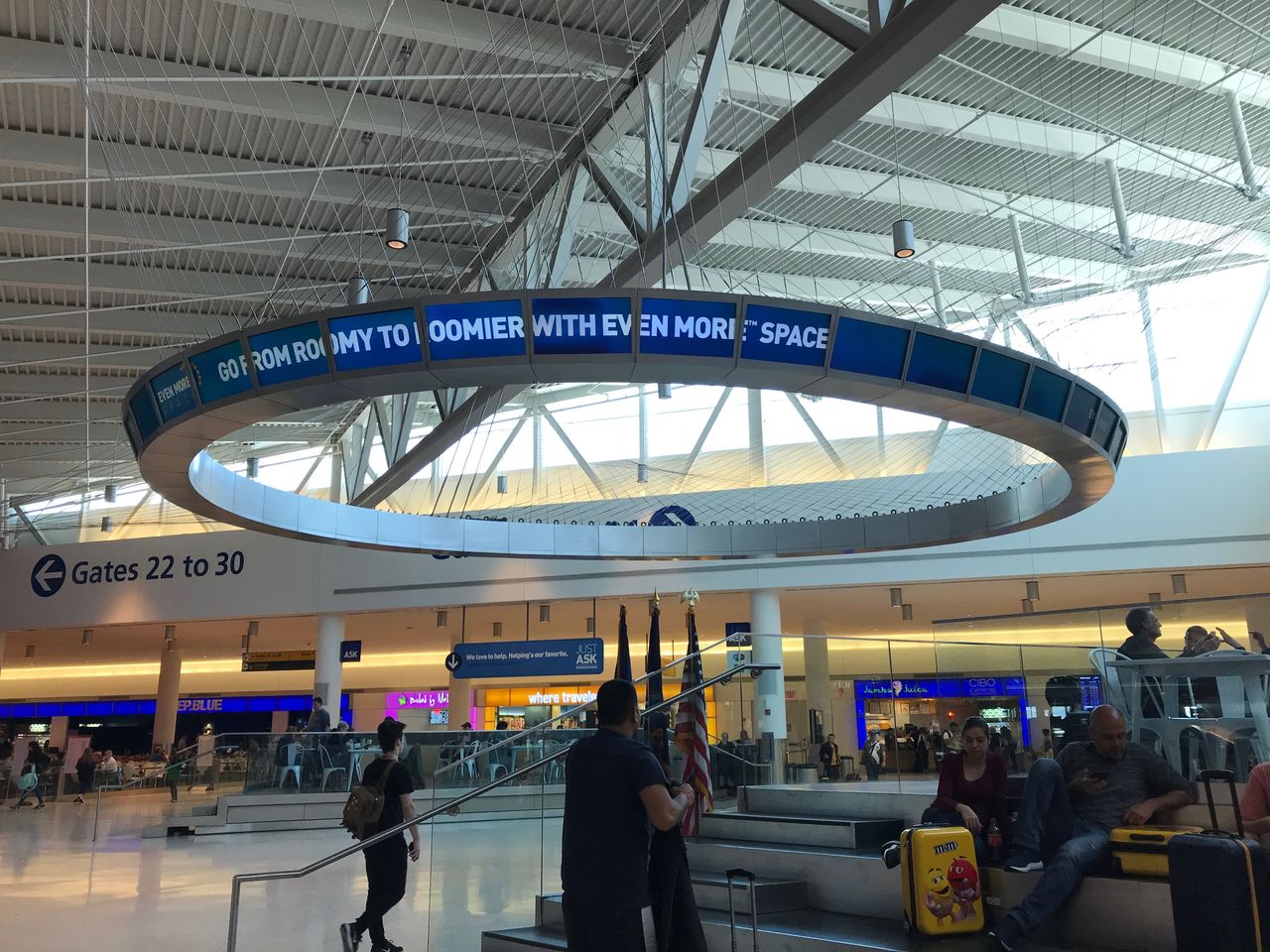 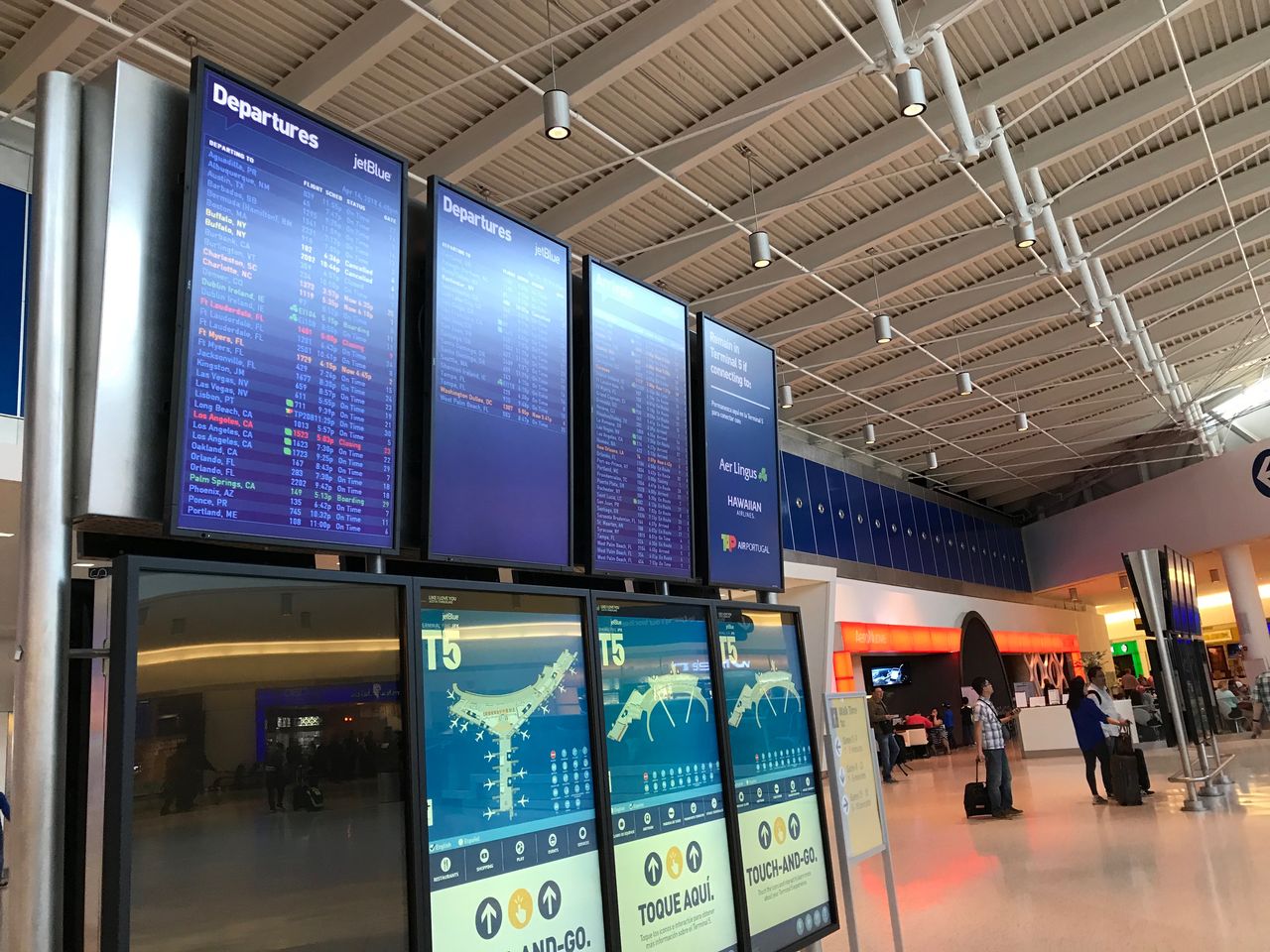 Before departure, I bought one last Starbucks hot chocolate. As much as I wanted to purchase an extra snack, the staff at the gate said that by doing so, it would be unlikely for me to make it back on time. Worse, I was not permitted to bring that drink on board so I had to finish it before boarding. Lucky for me my usual technique of waiting for the last minute before entering the aircraft worked this time.

I saw a full flight. And it is not surprising that NY-Dublin flights get full easily. I only found this out late but we were using an Airbus A330-300, a stretched version of the A330-200. I thought we were going to use the latter. But this A330-300 had an updated interior so the flight felt refreshing to be on board. I also prefer Airbus to Boeing aircraft for some reasons, one of them include the 2-4-2 seating.

As I settled down on the aircraft, I got my DVD player for my laptop and noise-cancelling headset and placed them on my backpack (which in turn was under my seat). Like the last time, I wasn't so much of a fan of the IFE selection on board. But I still enjoyed the interface and used the moving map.

We departed at 17.40. I shut my eyes for the first few minutes after takeoff. 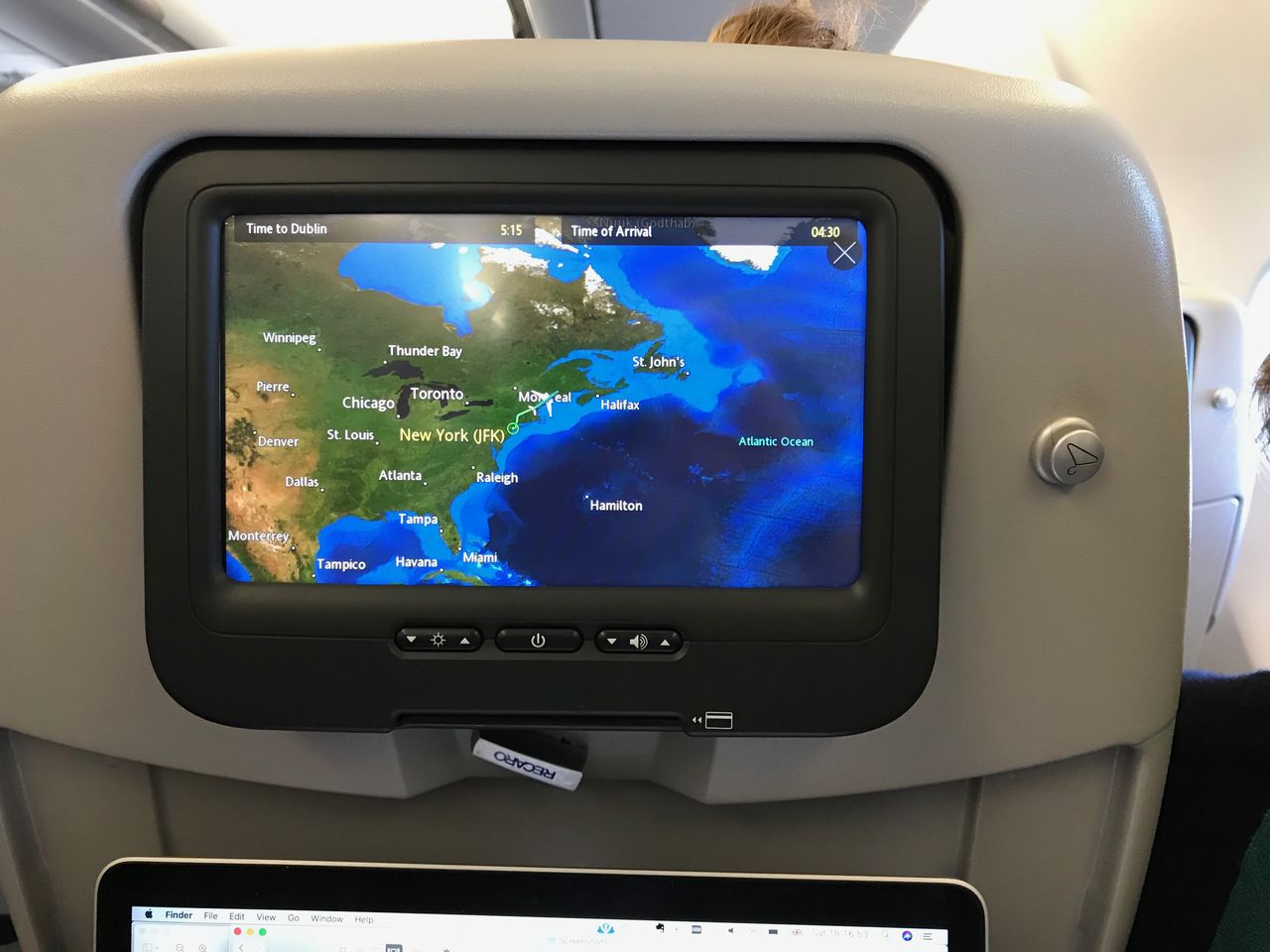 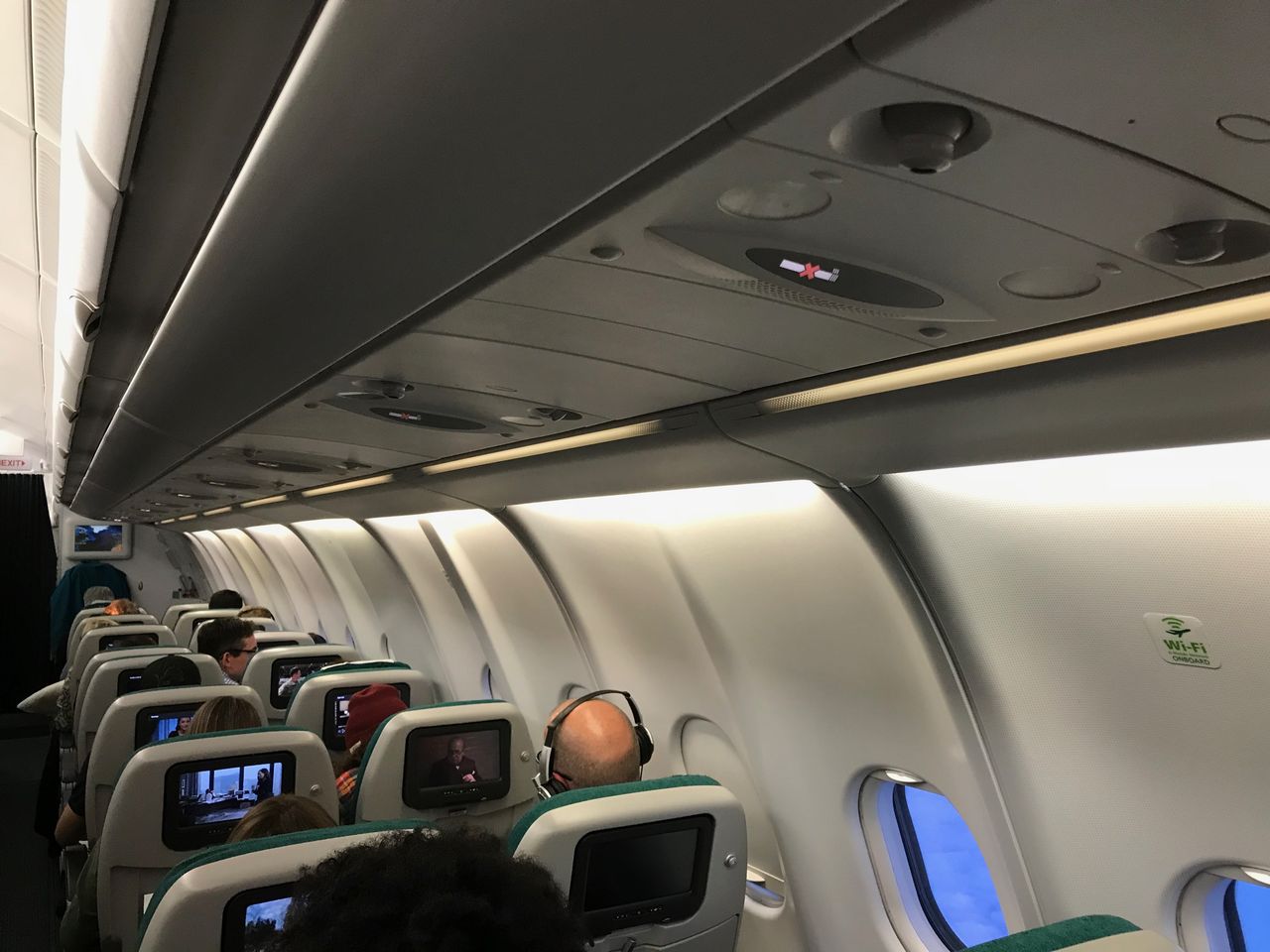 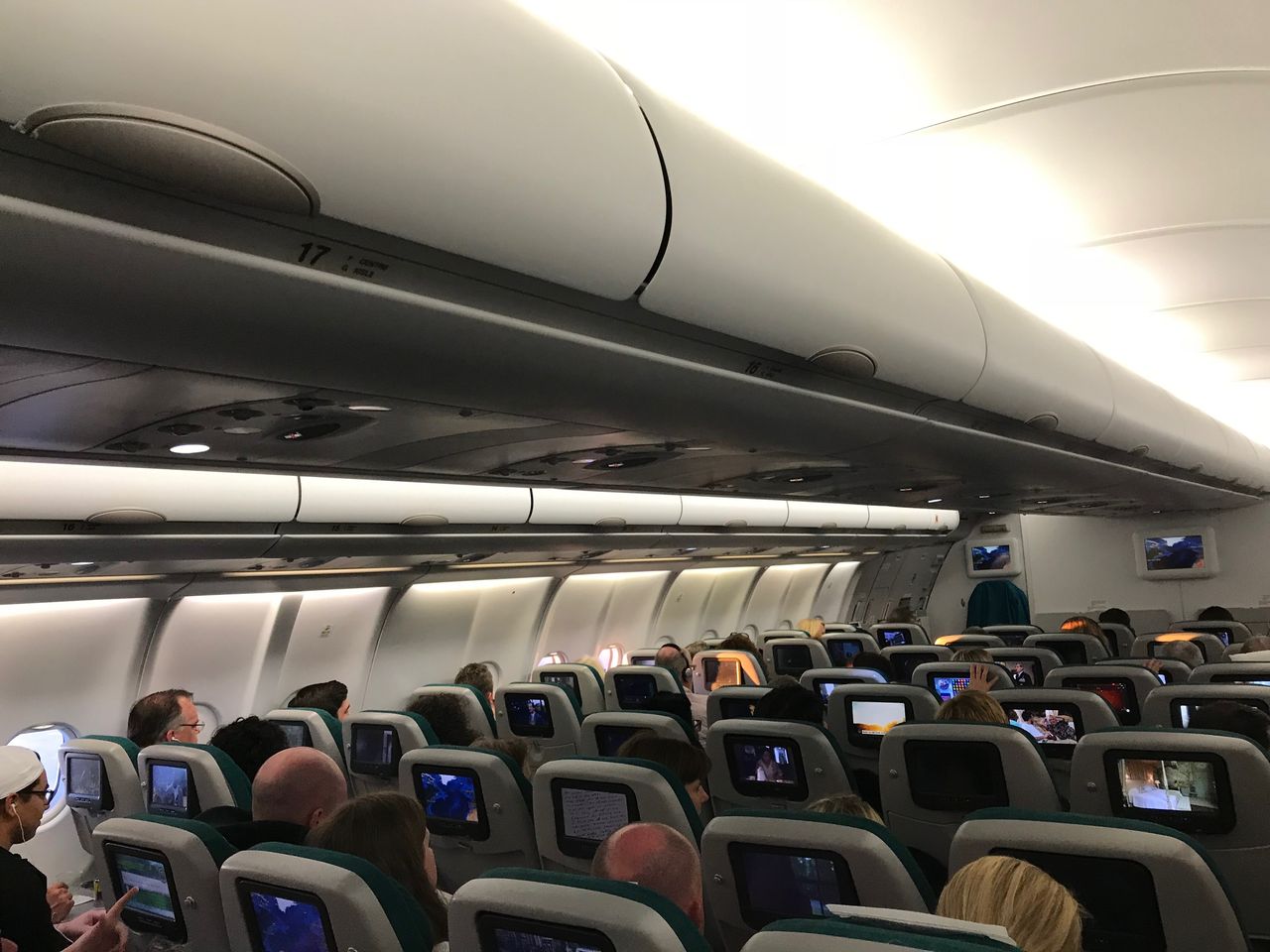 As the seatbelt sign was switched off, I powered on my laptop. Lucky for me, the power outlet next to my seat was working. And my seatmate didn't use it at all. But during the bar and meal service, it was difficult to use my personal devices and eat my miles at the same time since there was limited space on the tray table to put all of them. Nonetheless, I was able to watch as many DVD episodes on my laptop as I could. It helped make the flight feel quite 'short'.

I also tried the WiFi service during the second half of the flight. It helped me catch up with what was going on. Not fast but not completely slow either. The signal worked for the most part. However, I felt that they offered relatively limited data for the high price compared to Emirates. Due to the limited data made available, I only used it on my phone. But it also helped keep my flight a bit short.

TIP: When you connect to Aer Lingus' Wifi network and buy a package, you will be directed to a screen that tells you how much data you have left. Keep this page active as can use it to disconnect whenever you want to save on data for a later event.

During the bar service, we were served with soft drinks and pretzels. Unfortunately there was an announcement on board asking to refrain from eating nuts because a passenger said she was allergic to it. But I thought that weren't nuts served previously. Then I recalled it was pretzels, which was good enough for me. We could ask for multiple servings. But if passengers wanted other bites, they had to pay extra. For the main meal, I chose the chicken option again. I found it delicious as I have done before and it came complete with a chocolate moose dessert. But a printed menu for passengers was missing on this flight. We were served coffee and water later on and I had some of them. Midway during the flight, I recall passengers were also offered ice cream. And during the final hour, we were served a light snack in a box: blueberry muffin and orange juice. Unfortunately I didn't have time to finish the latter but I sure liked the muffin. 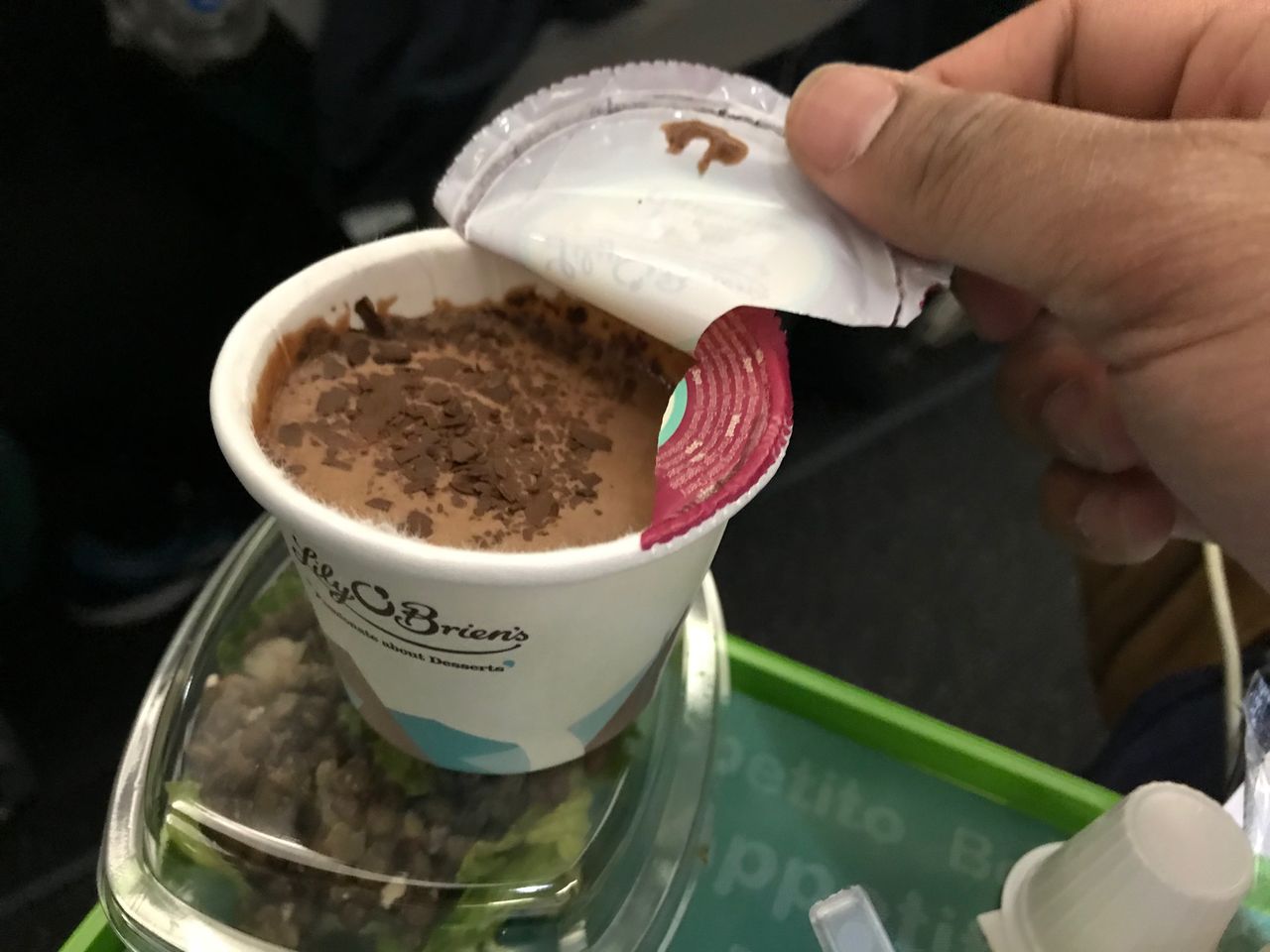 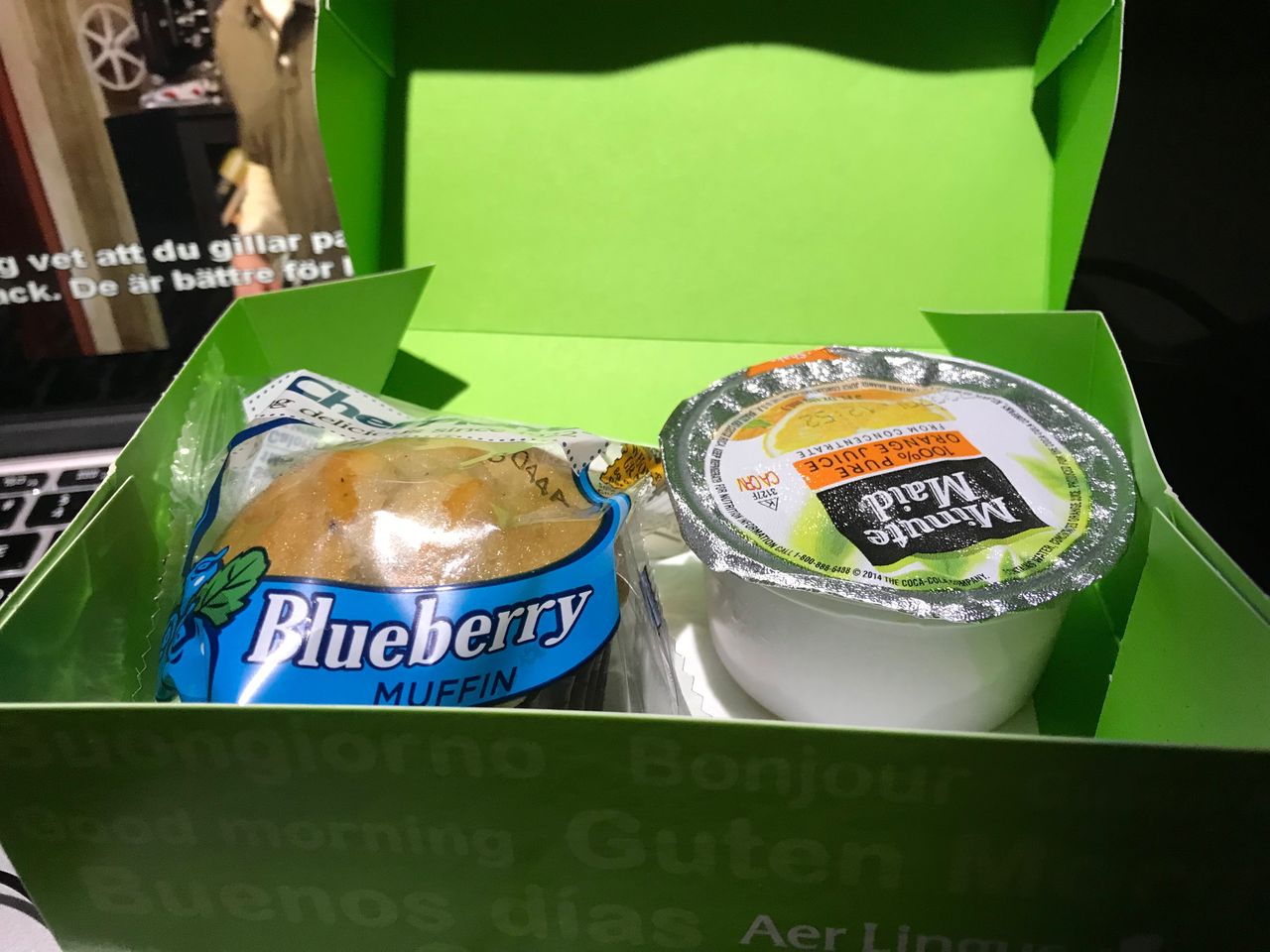 Other things I observed was that unlike the US-bound sector, duty free shopping was offered. But as duty free goods are overpriced and I didn't need anything, I just declined to buy something.

During the final moments of the flight, I decided to try out the audio player. I listened to the tunes of Katy Perry. The audio selection was good enough for me. But I barely got to the second song when the plane touched down in dublin.

Except for the occasional turbulence, it was an uneventful flight. 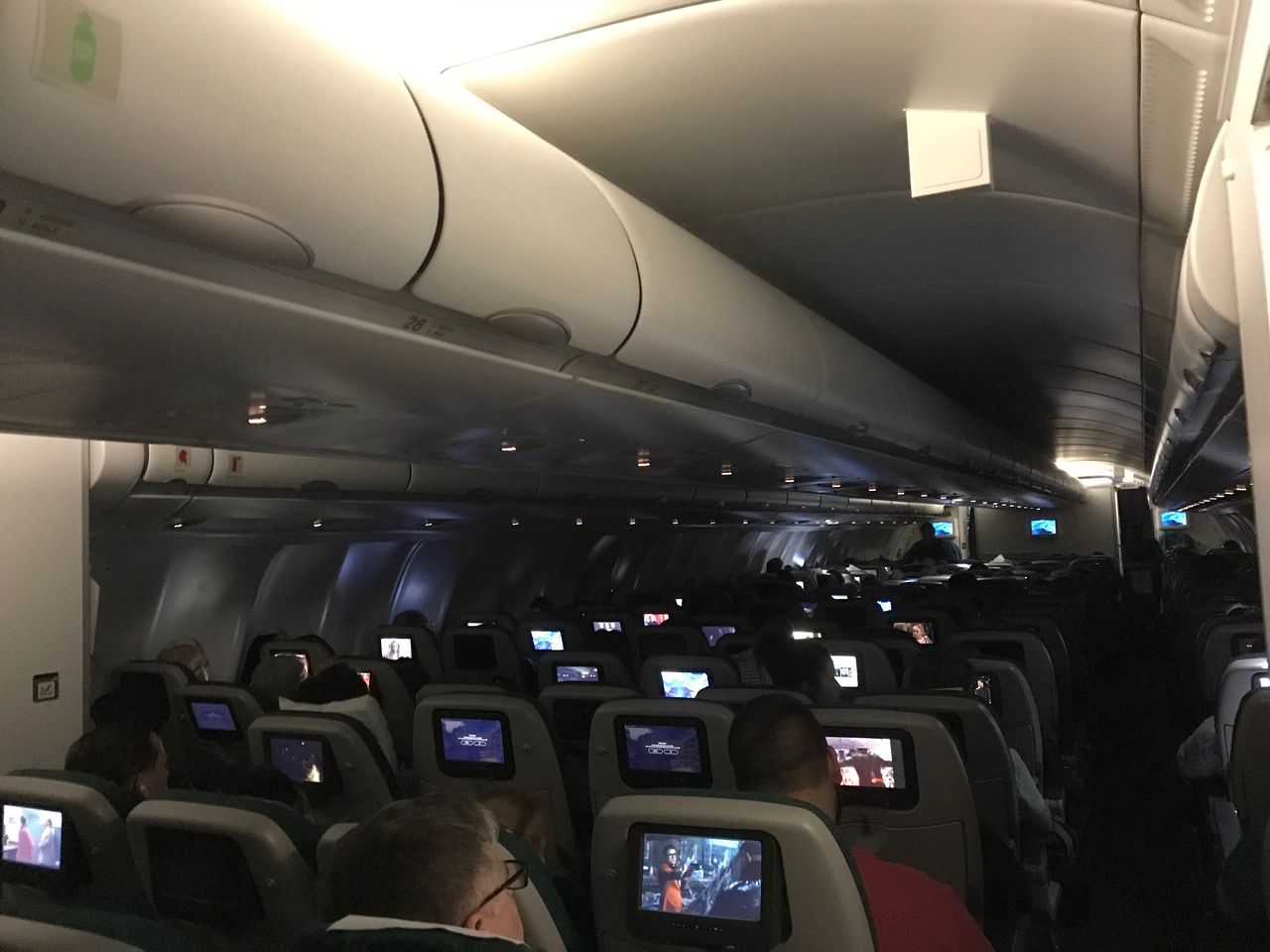 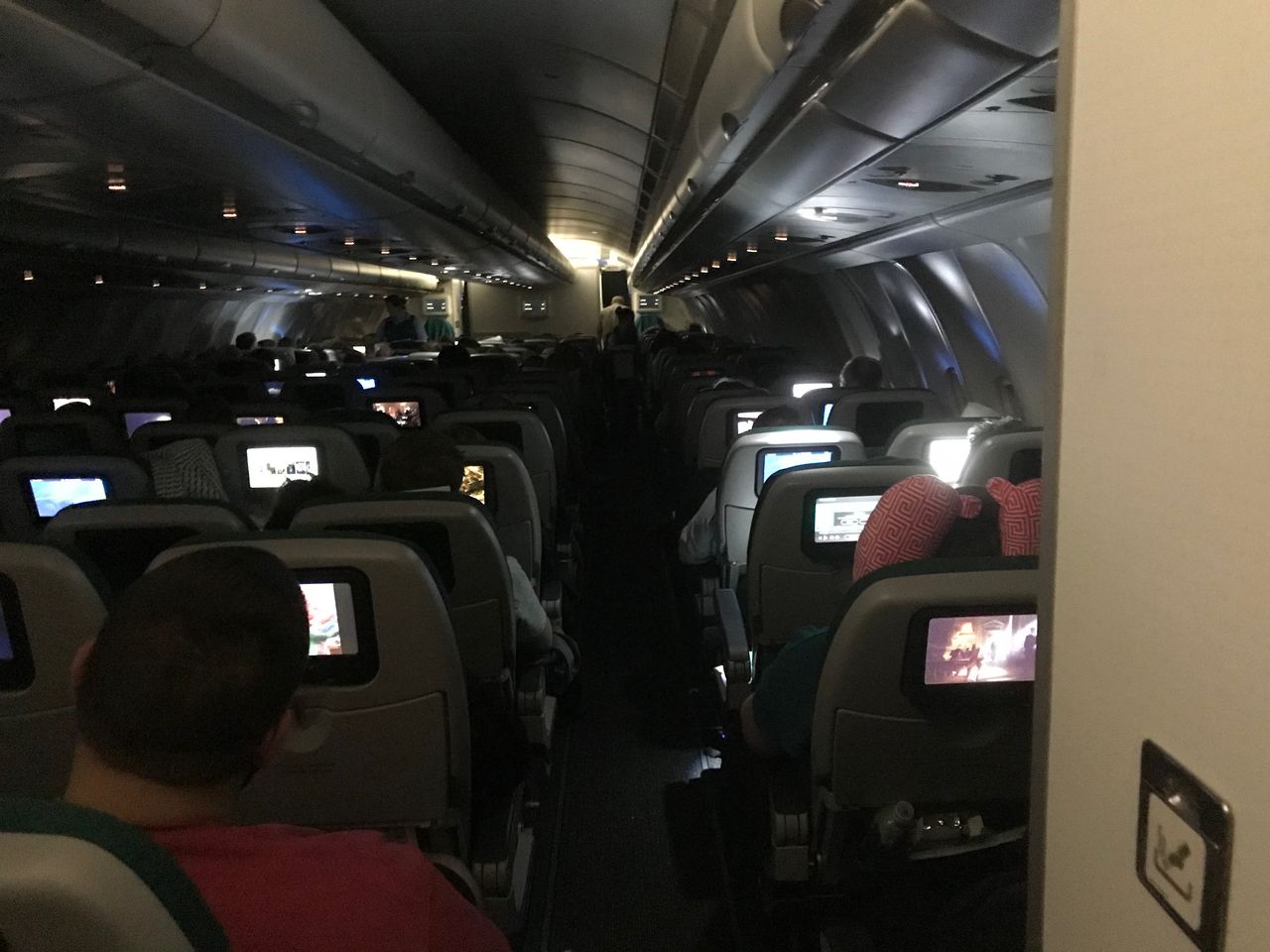 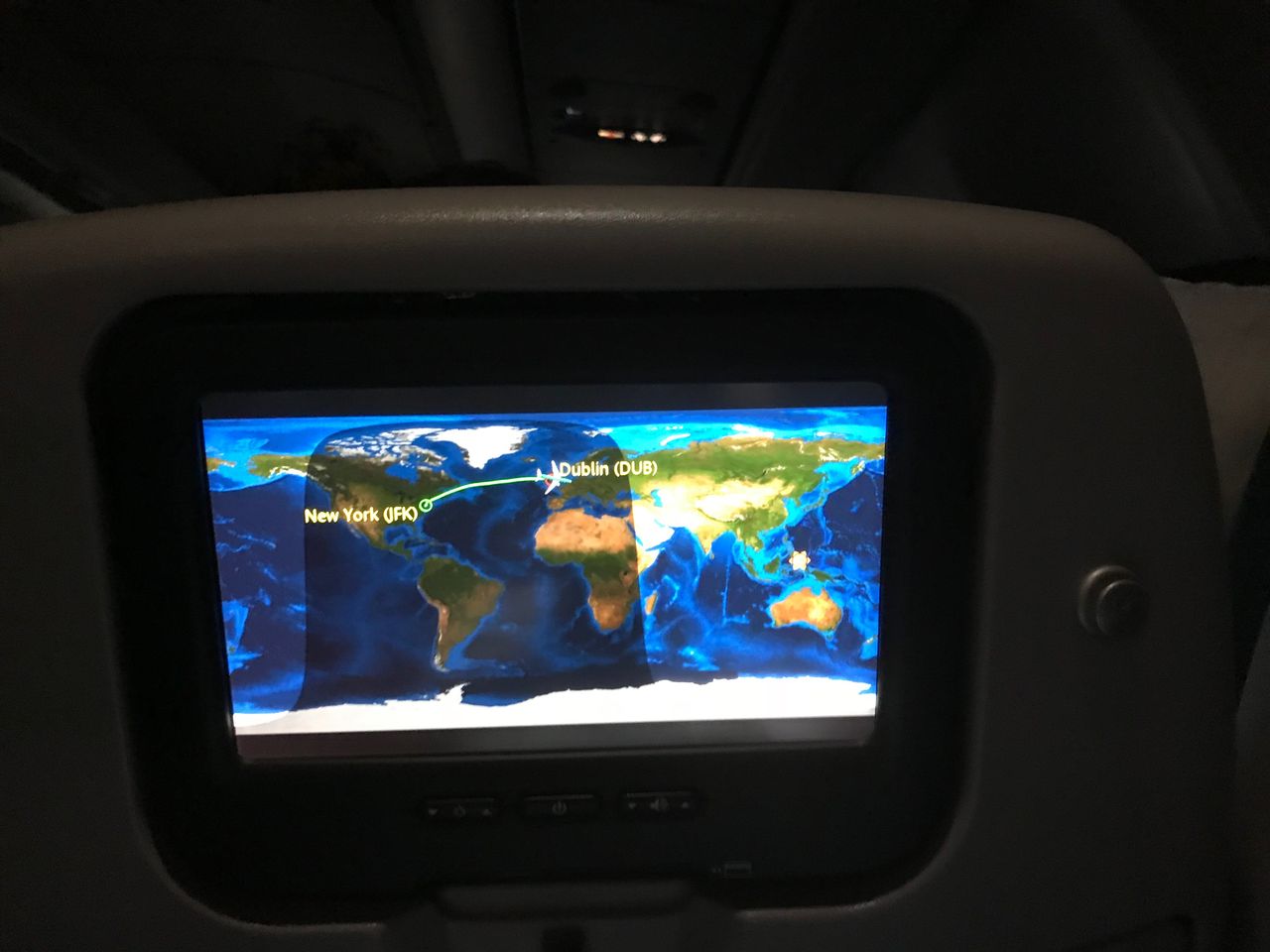 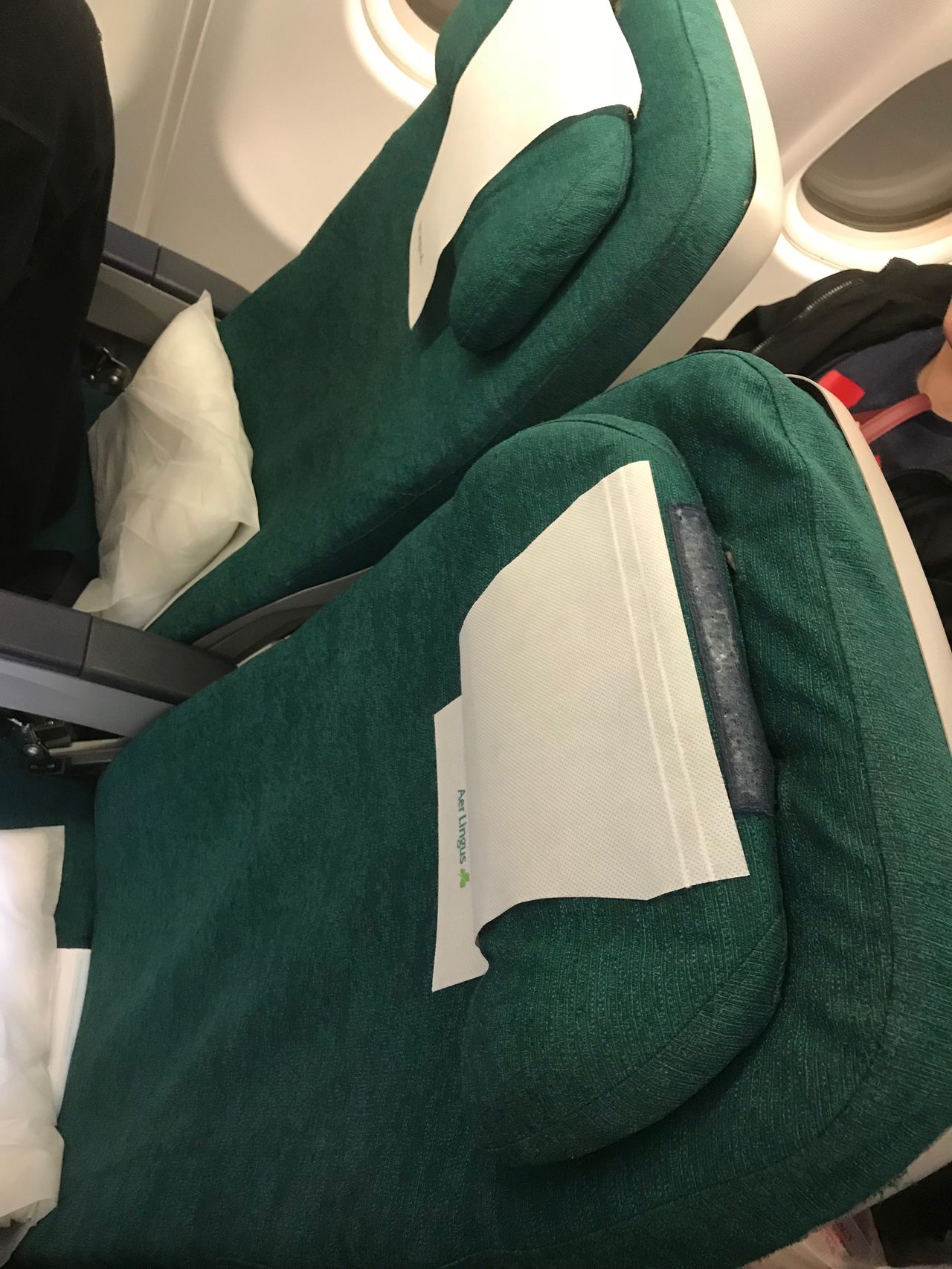 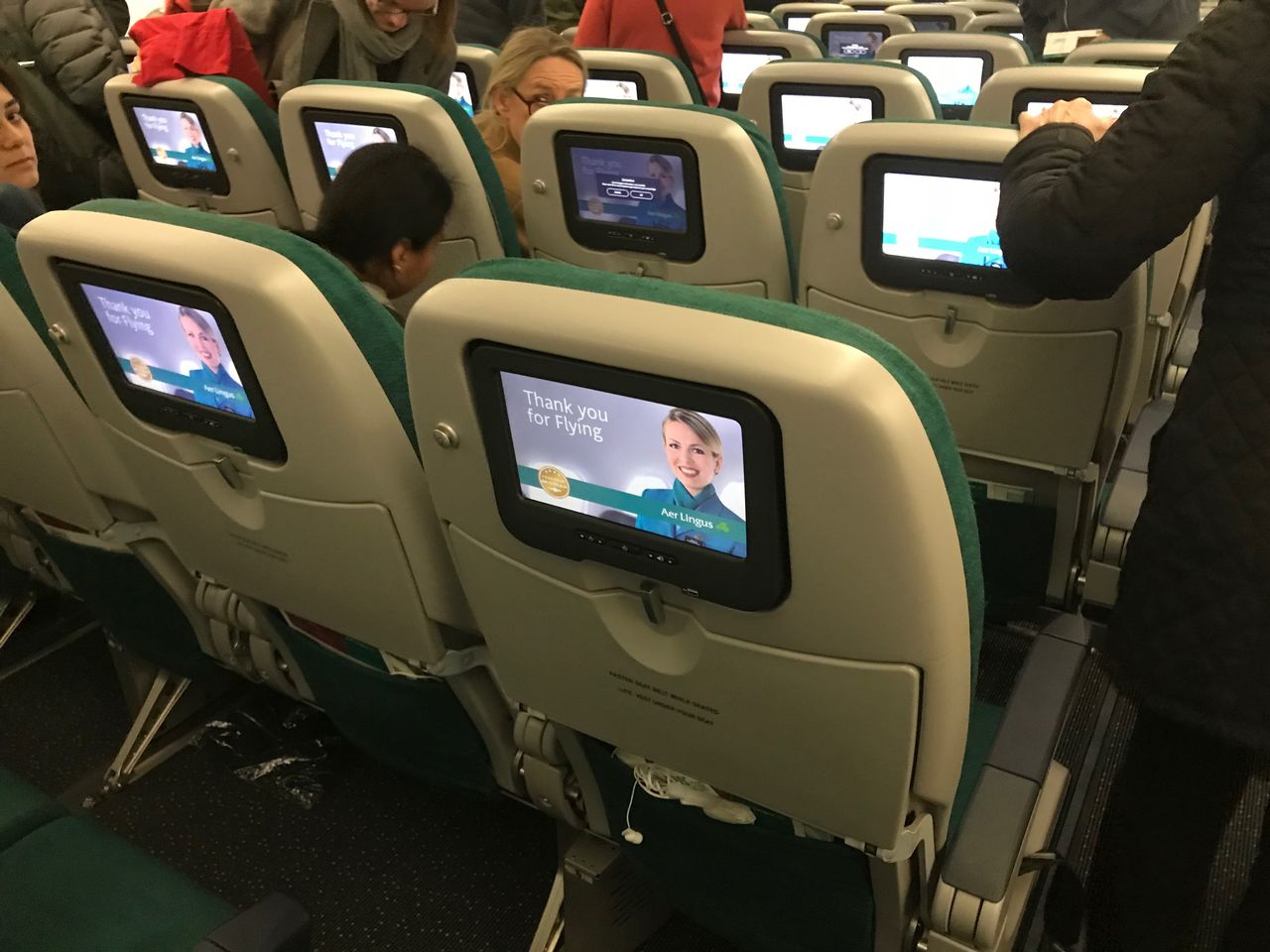 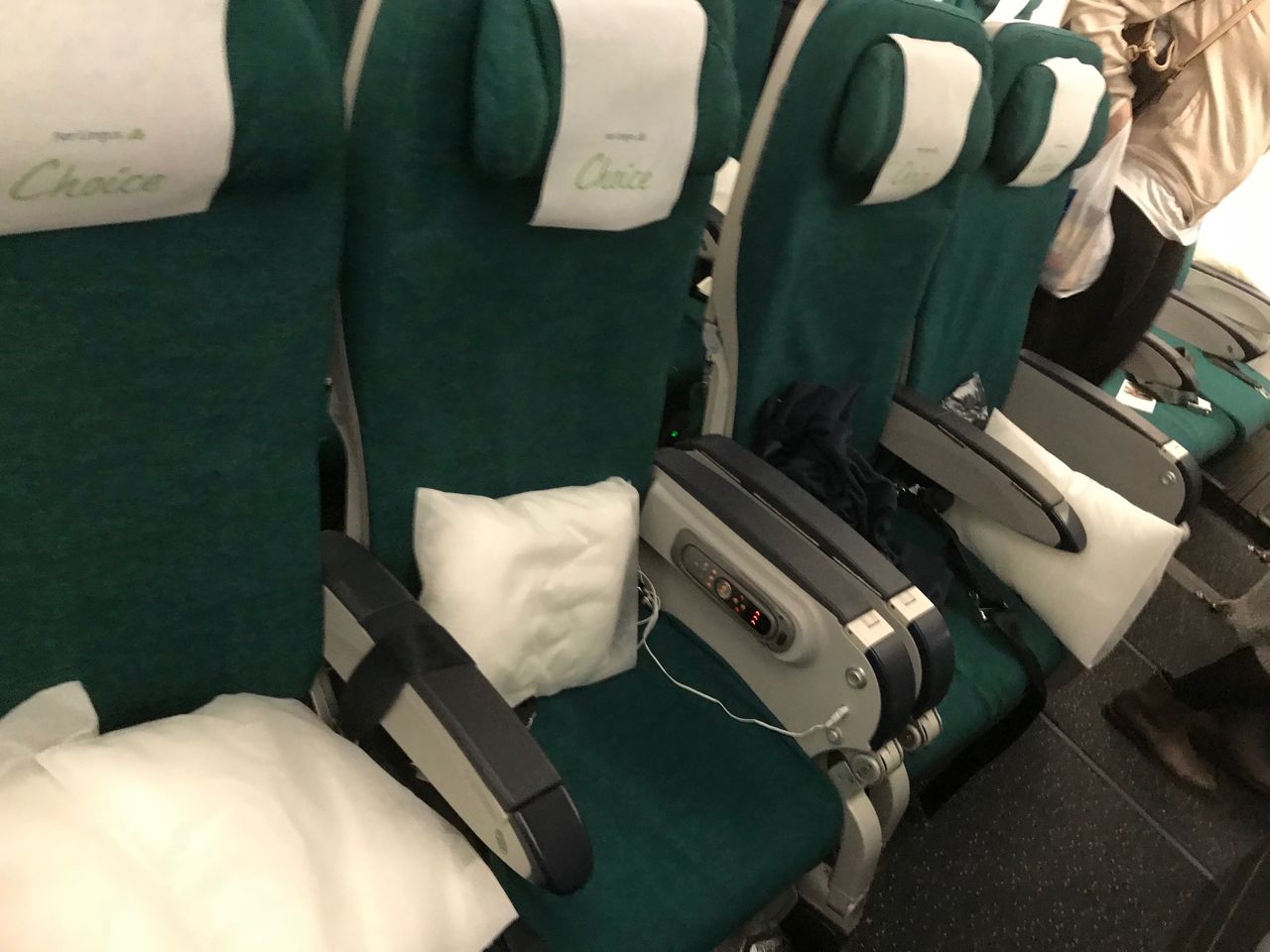 Our flight arrived at 4.30, which was 20 minutes ahead of schedule. As I disembarked from the aircraft, we were directed to a transit area. The signs were clearly marked. But I will get more into this in my next report.

RATINGS FOR THIS LEG

These are rated from 1 to 10 with ten being the best score. This covers aspects of the flight experience that Aer Lingus and its ground agents are responsible for with a focus on Economy Class.
[*]Check-in (9/10): The staff were quite helpful and the queues were short.
[*]Boarding Process (8/10): I didn't experience no bottlenecks at the boarding gate. Though they should put a sign that beverages purchased at the airport cannot be brought on board.
[*]Food (9/10): Delicious dinner dishes. Though I wish that they had printed a menu card just as they had with the outbound flight.
[*]Cabin Crew (9/10): It was a pretty standard service.
[*]Punctuality (10/10): It's a strange phenomenon that more often than not, my flights going home are the ones that are more likely to be on time. But you can't complain. It landed way ahead of schedule. At least it accorded me adequate time at Dublin Airport.
[*]In-flight Entertainment and Connectivity (8.5/10): Although the video content was the same as my outbound flight where it wasn't my cup of tea, the last-minute exploration of the audio library was. Still, it is not as wide as the Emirates IFE library. However, the power outlets were working. WiFi was also alright, though it can be competitively priced. I liked the interface which told us what was coming up. Without a doubt, there was an improvement from my first flight.

There were some improvements on the return flight: properly-working power outlets, short flight times, punctuality, and a fresher interior. For as long as the fares permit me, AerLingus is now going to be my first choice for travel between Europe and the US.

The contributors of Flight-Report published 3 reviews of 1 airlines on the route New York (JFK) → Dublin (DUB).

The airline with the best average rating is Aer Lingus with 6.1/10.

The average flight time is 6 hours and 5 minutes.

He wrote 15 reviews about 8 airlines and 14 airports.