While I finished my working week on a friday morning very early, I bought a ticket with EasyJet's flight 7401 from London Southend to Amsterdam, but unfortunately EasyJet decided to cancel most of it's flights to Amsterdam due to warnings of strong wind in the Netherlands. They either gave me a choice to rebook myself on one of their flights, while paying my hotel, food and transport expenses. However the earliest flight they could offer me was a flight on Saturday evening around 7 pm from Luton, which was a no go forme and decided to request a full refund from them.

While my shift was finished at London Southend Airport, I was now required to travel by public transport to London City, which is quite easy to be honest for a fair price of 20 GBP total. The Greateranglia service offers you connections to London downtown and most importantly for me to Stratford. Usually you have plenty of choice to find a seat at London Southend, but the trains will be fully packed the moments you will approach into London itself. 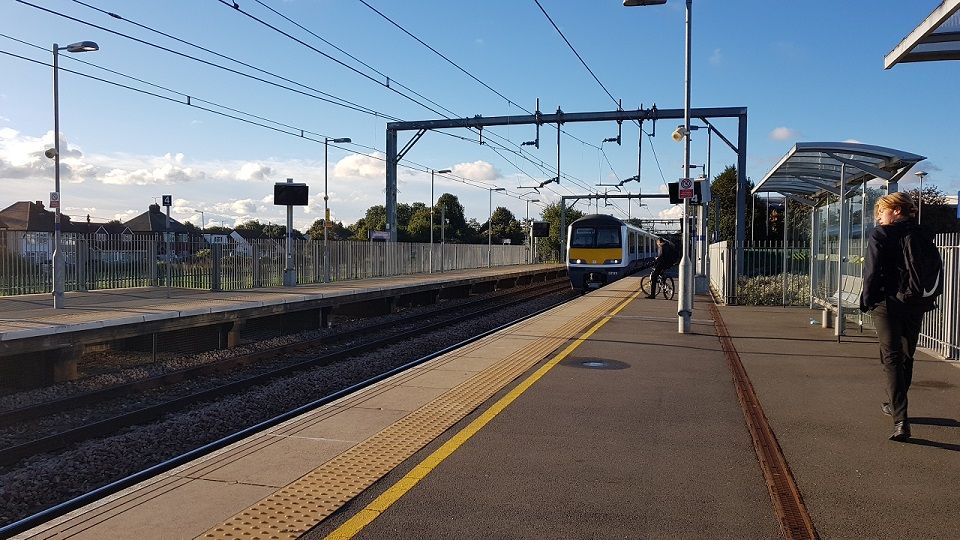 The ride itself from London Southend to Stratford itself is around 45-60 minutes performed by Greateranglia. 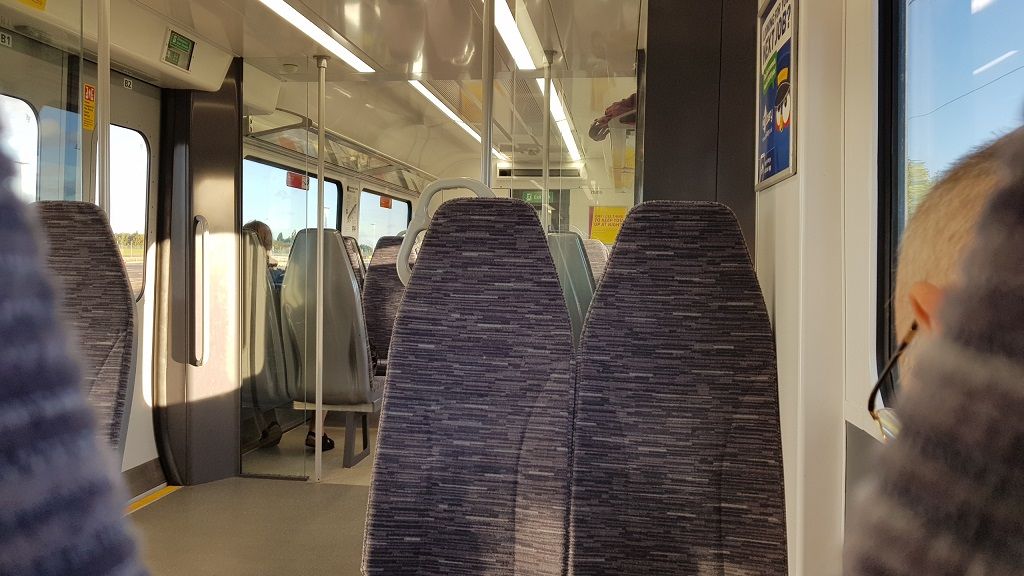 In stratford, you would be transferring over to the Dockland's Light Railway to have a direct ride to City Airport itself with those odd-looking trains that definitely could use some wash. 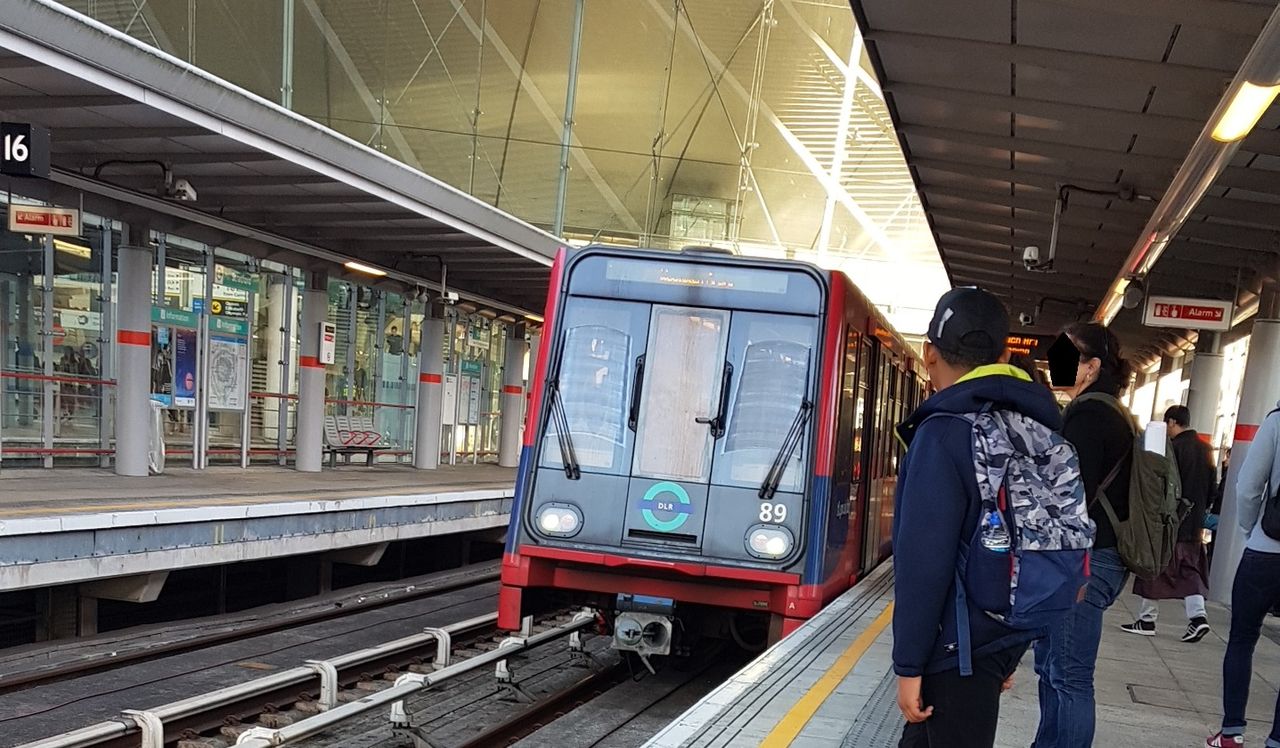 The ride to London City Airport from Stratford is about 15 minutes. While you may see some nice sceneries and landmarks in London, be prepared to have quite an uncomfortable bumpy ride as the way those trains are accelerating and decelerating is so unnatural While I finally arrived like two hours in advance of my flight, I went down to one of those self check-in machines and noticed that their system is not really updated yet as FlyVLM went bankrupt last month, yet it was still in their display. The check-in gives you four options to check-in, but I chose to use my passport as I was quite lazy to grab my phone to hunt down for my booking references. Yet the system has a major flaw as I was required to fill in the flight number myself, booking reference too and thereafter again to scan my passport yet again for unknown reasons. 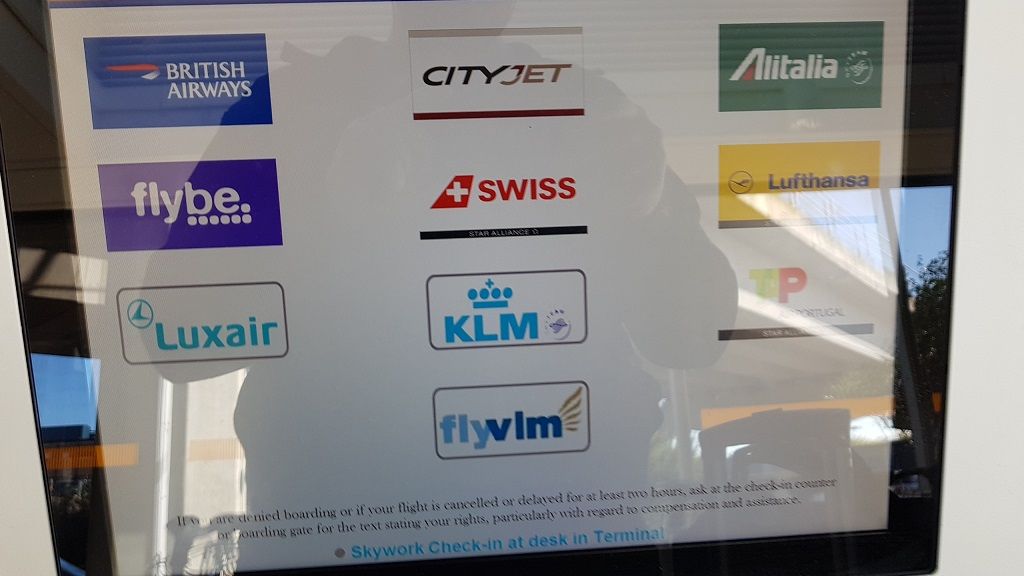 After receiving my boarding card, I went to British Airway's drop off counter. The lady behind the desk was in a chat with one of her colleagues and was not really in the mood to really start to check-in my bag, but eventually did…. She had to as she was the only one available to do so.

While everything was sorted, I decided to walk to Costa to have a quick bite and a coffee before heading up to security for my flight. After finishing up my coffee, I now finally decided to go up to security with 90 minutes left for my actual departure. Only one security lane was open for the flights, though it was very quiet. It took about 5 to 10 minutes to clear it, although it could have been faster if passengers actually decided to drop their container in the designated spot after clearing security instead of just leaving it on the belt. (probably one of my biggest nuisance in flying).

While clearing customs, you will enter the secured zone in a small lobby offering you a few restaurants and stores with a small seating area on your right. No gate information was shown yet as this is usually given to you via screens shortly before your boarding time. I decided to have a quick seat and one of the main advantages of London City is that some of their seats have charging plugs in them. While my gate was now announced, I decided to head up through the hallway to gate three.

Our bird arrived on time out of Geneva. Meet G-LCYW, the Embraer 190 of Cityflyer that would bring us today to Rotterdam-The Hague. 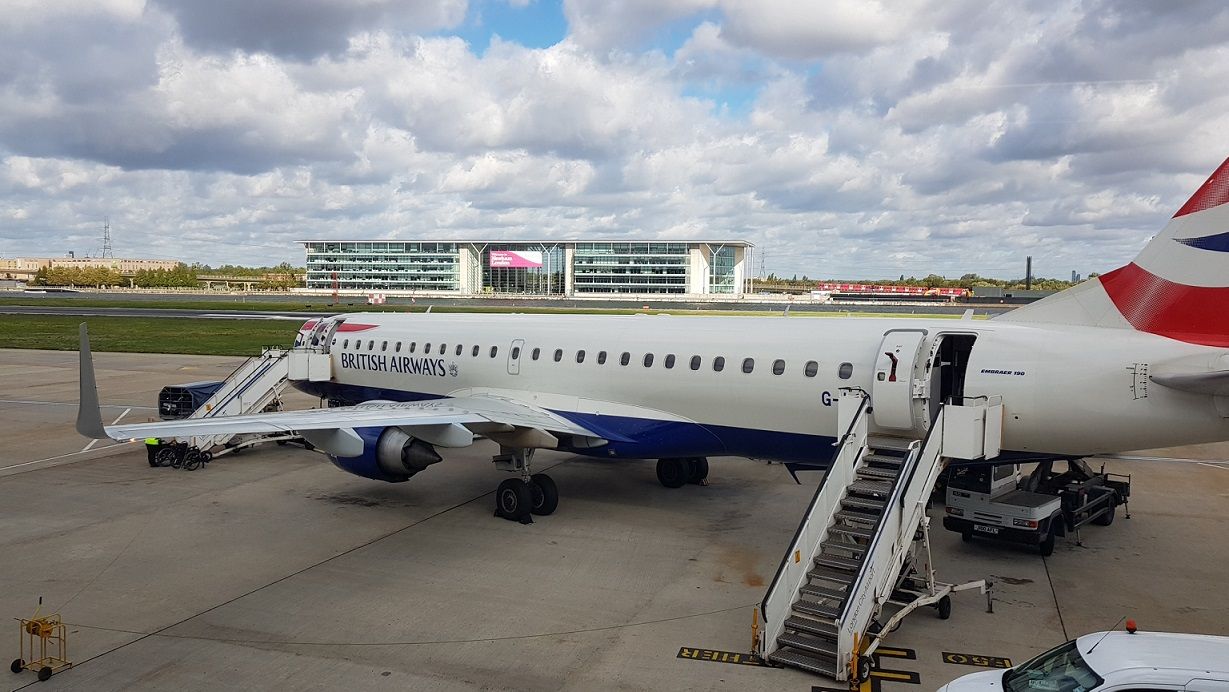 Unfortunately there wasn't much variety at this time. I was too late to capture a KLM E190 departing of RWY 27, but did capture a Luxair Dash 8 heading to it's parking stand. (The only non-cityflyer aircraft on the apron) 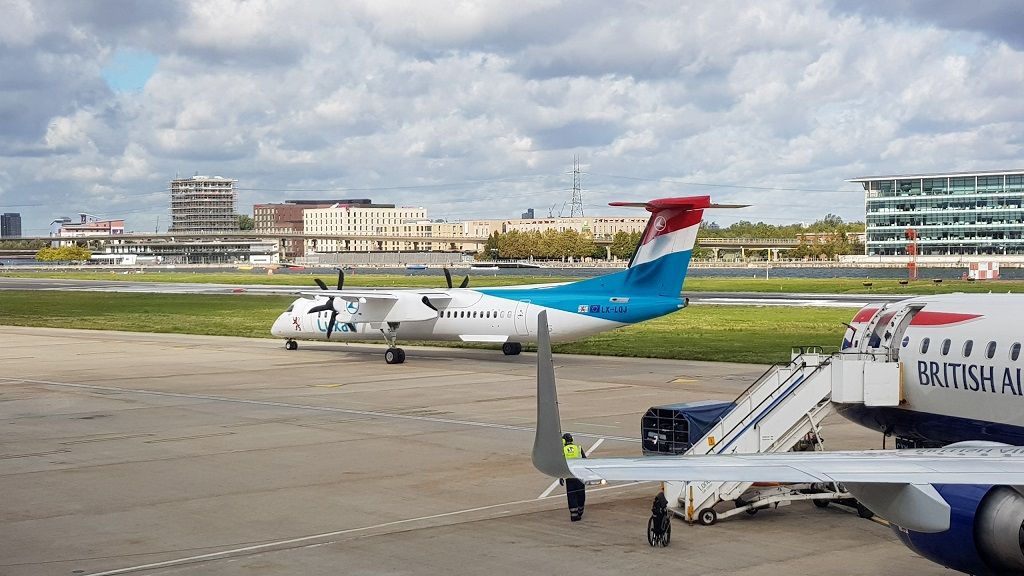 While boarding was about to start, the ground staff did announce for some passengers to come forward if they were willing to place their handluggage in the hold compartment free of charge as we were a very full flight today to Rotterdam. Five minutes later we started to board and within 10 minutes of the call, everyone was onboard with all doors locked.

If you got the chance to fly business with BA Cityflyer, I would highly recommend you to check-in for seat 2C (Aisle) or 2D (Window) as the legroom in BA's E190 is amazing there. Definitely much better than Row 1 or 2A/B. (I could almost lay completely flat over there!) 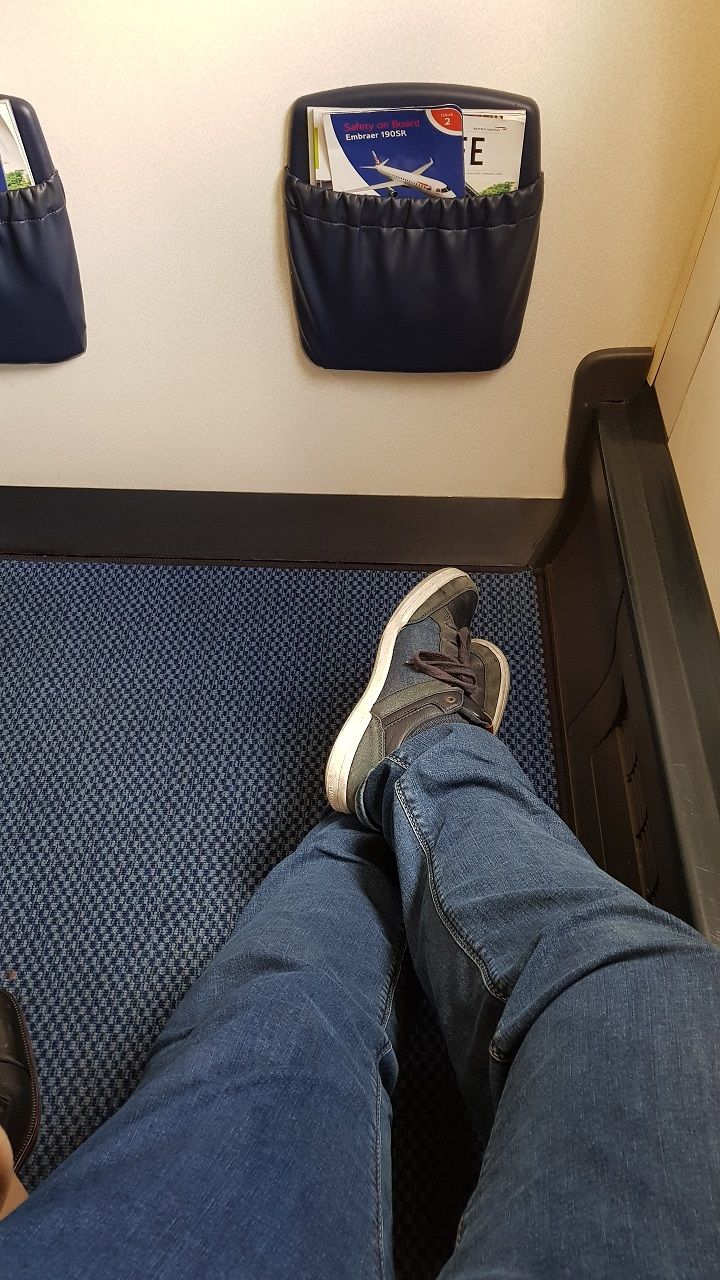 A BA Cityflyer E170 just landed and on it's way to their stand.

A very quiet hour at London City as two BA Cityflyers were parked on the right side of us and a BA cityflyer and Luxair on our left. 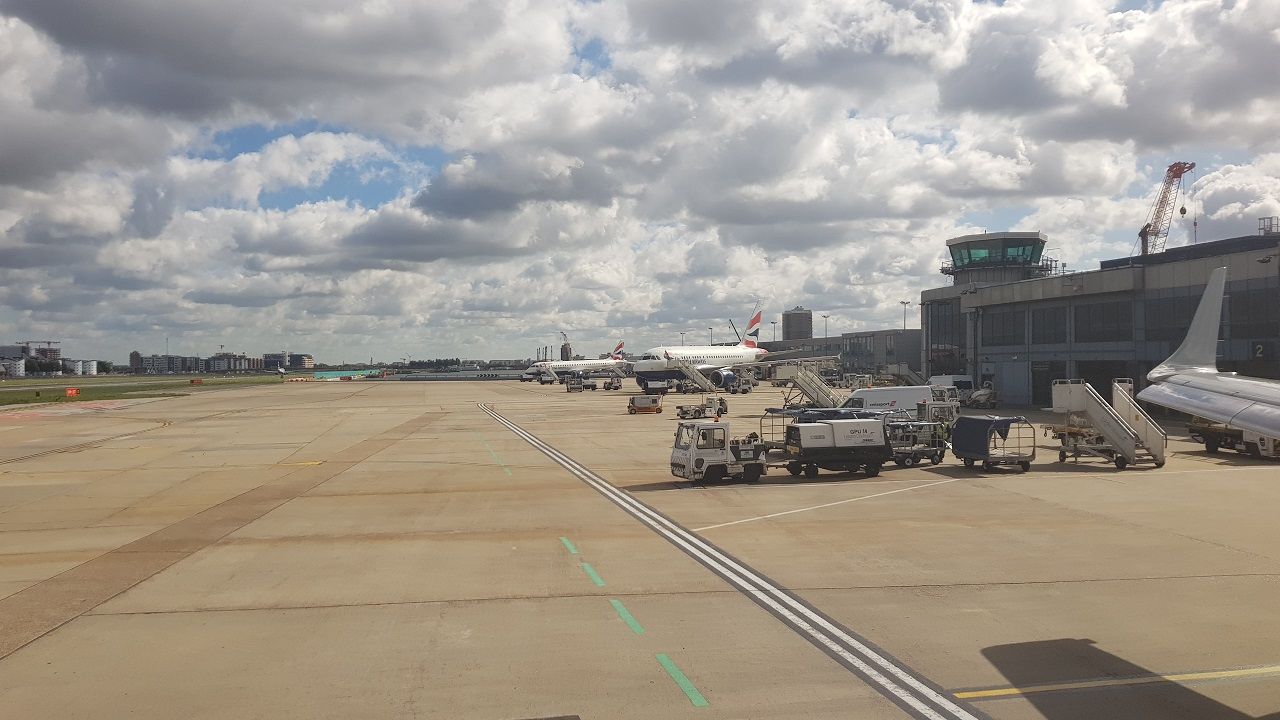 Meet the Airbus A318 (probably the biggest jet together with the CS100 approved on London City) used by British Airways to New York via Shannon in a 32 business config.

After a small backtrack of RWY 27, we were shortly rolling for take off. The moment we lifted off, a very bumpy ride was about to happen as London City and many other western European countries were having trouble with strong gusty winds. 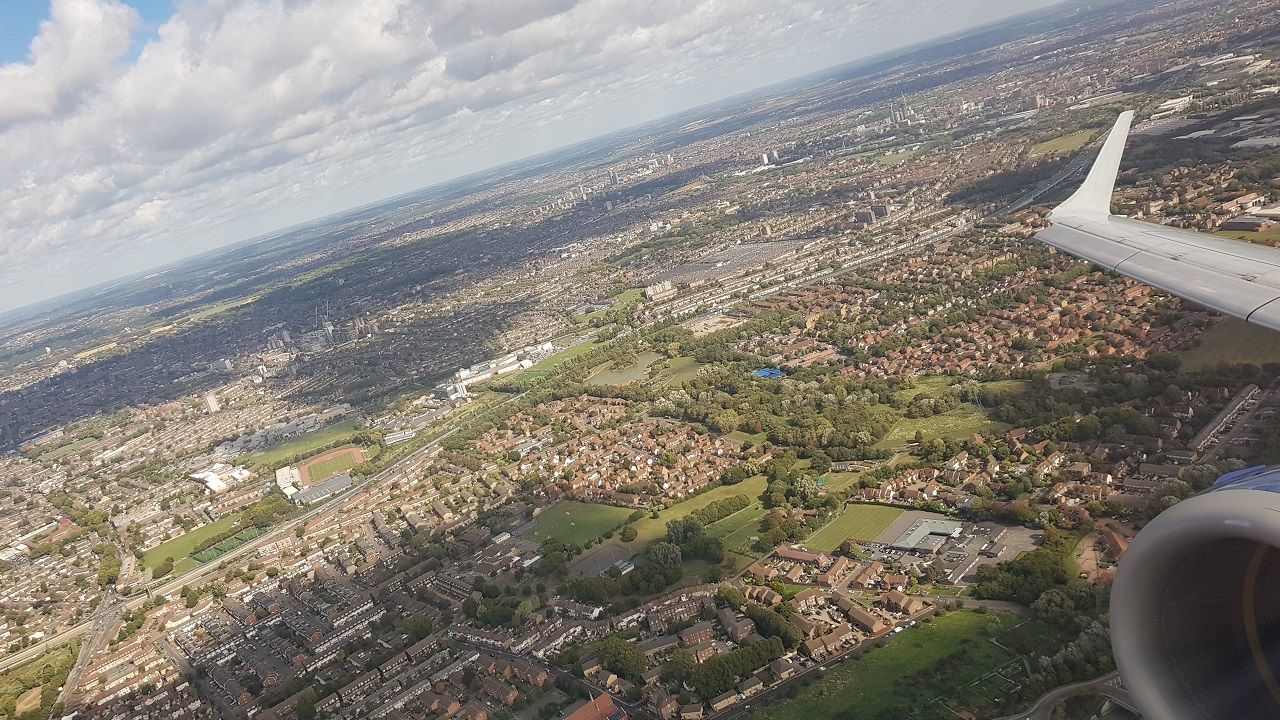 An early right turn was initiated to head easterly towards Rotterdam, but unfortunately we had to stay at a lower level for a period of time. Probably due to the congestion of London Airspace. While finally cleared for a higher altitude, the air became smoother for an enjoyable ride. 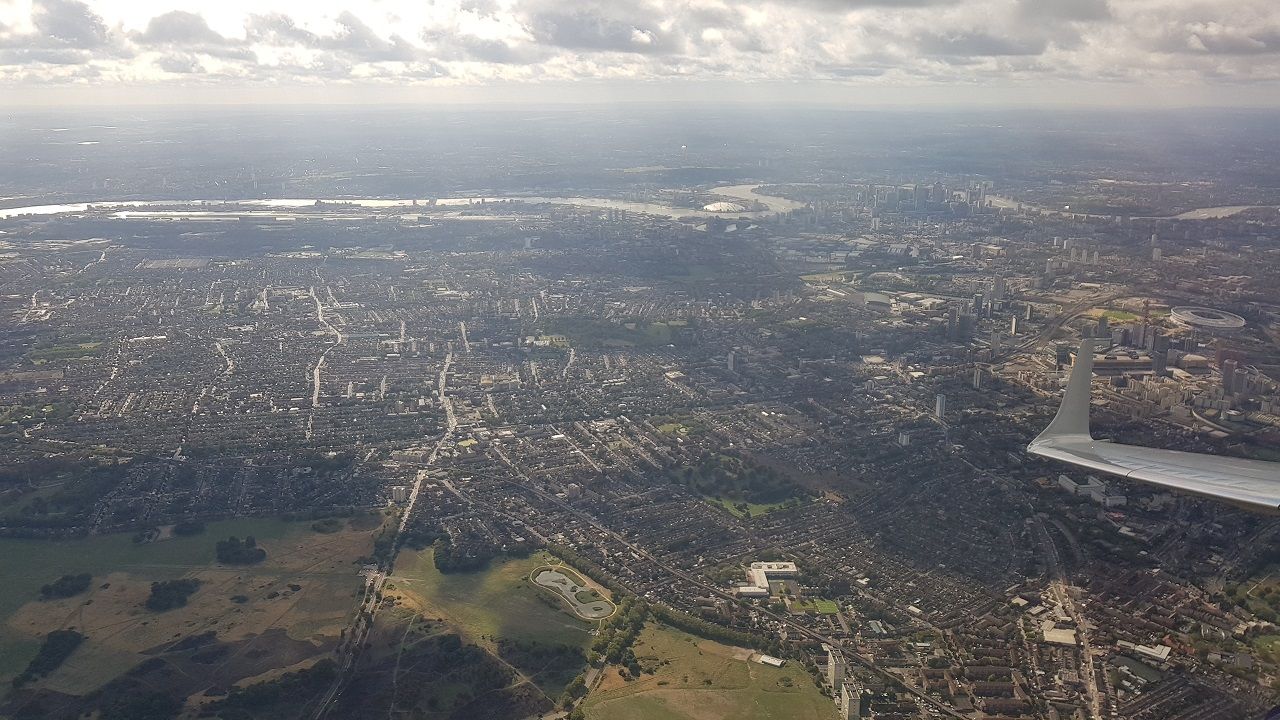 The purser of the flight started to bring hot towels to the business class passengers and delivered us a small menu for today's flight. The choice of today's flight was a Peppered Mackerel fillet or Smoked Duck with Egg noodles. 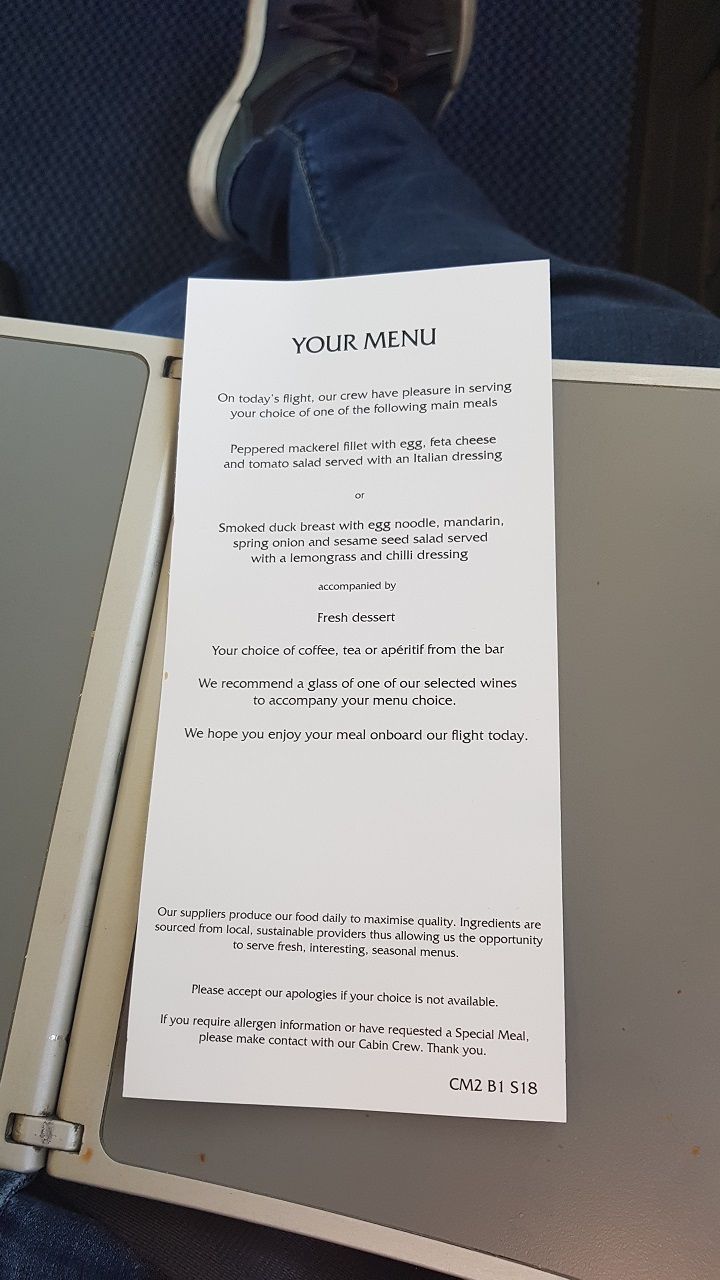 Shortly after delivering the menu cards, the purser came by to request our drinks and I opted for a red wine with sparking water. 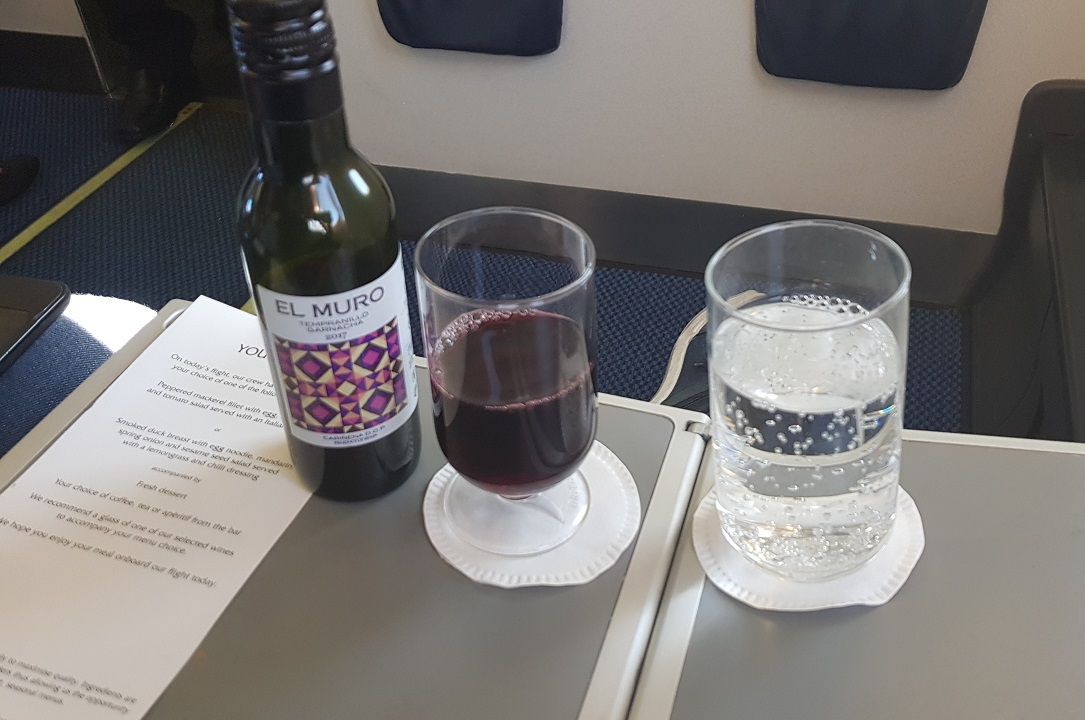 While drinks were served, he came by once again to take our orders for food and I opted for the Smoked duck. The food was decent, yet a bit too cold. 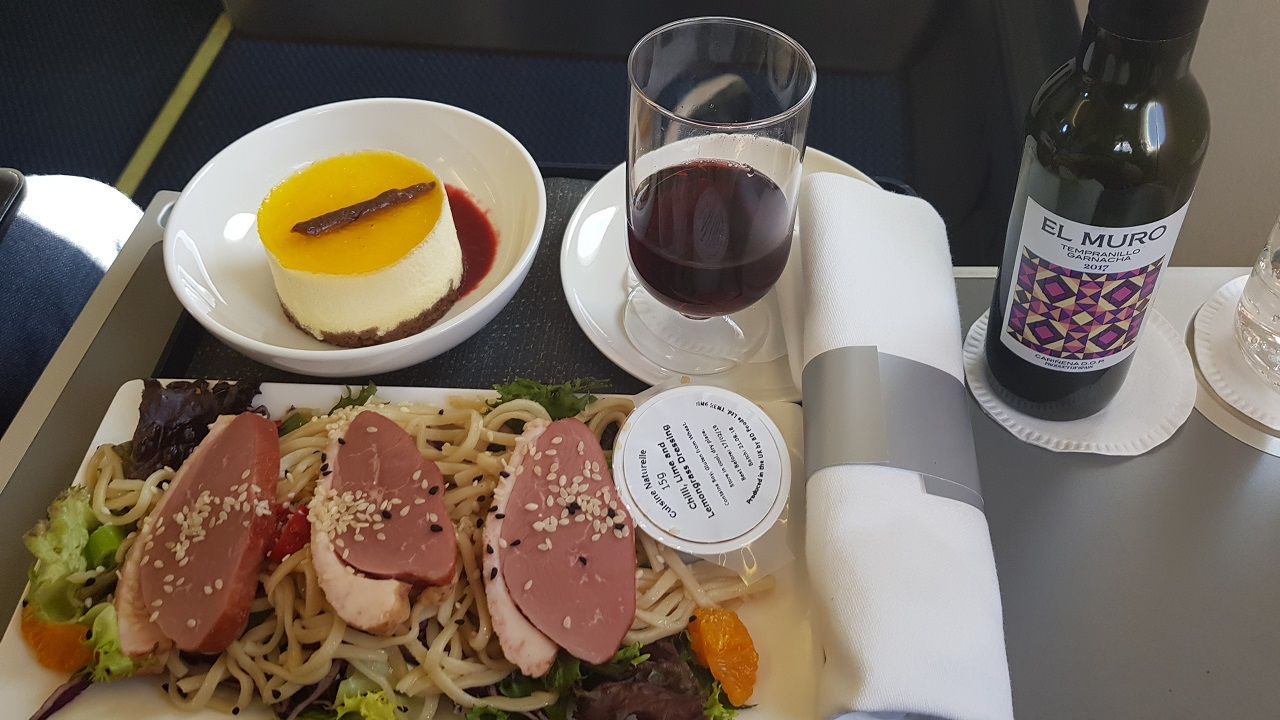 Purser came by to clean up quickly as we were already in approach to Runway 24 of Rotterdam-The Hague with yet another very bumpy approach and firm landing, but you could have expected that already from before. Read the TAFOR of the time of the actual arrival below. 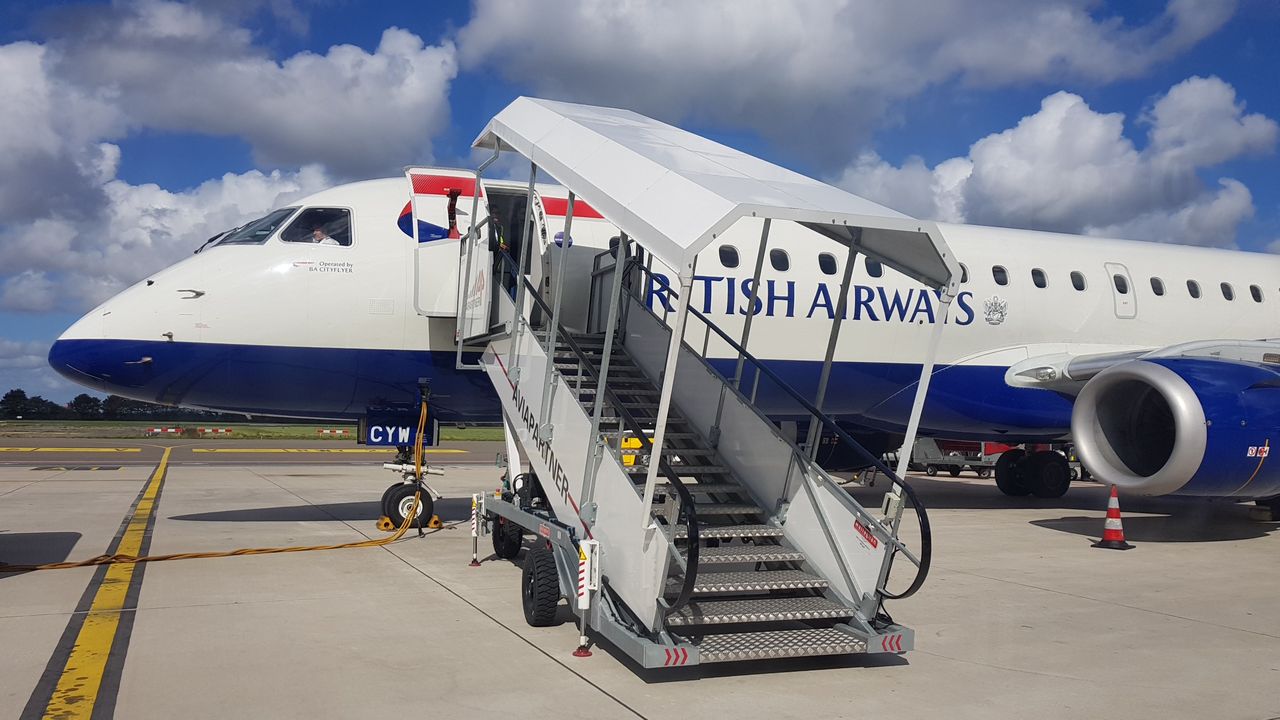 And yet again it was a very quiet hour at Rotterdam either as there was only a Tuifly Belgium and Transavia present at the current time. Both a Boeing 737-800. 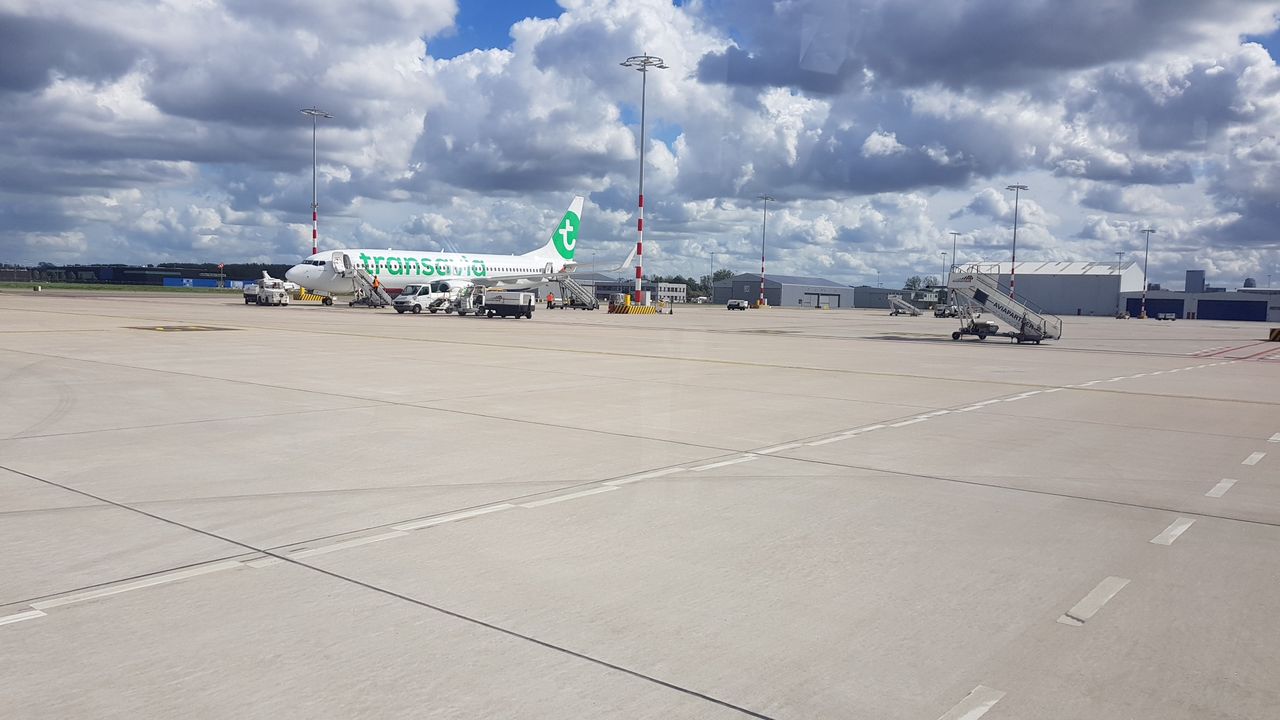 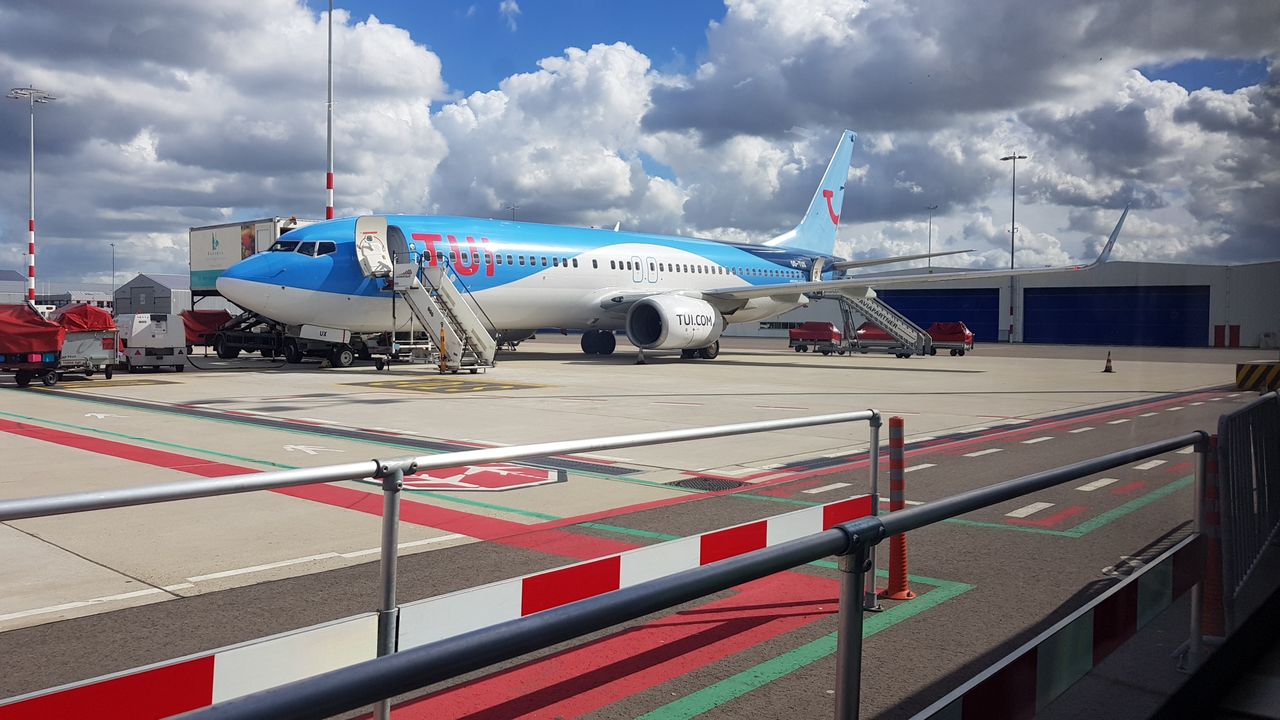 Border control took about 5-10 minutes too as only two stations were manned, but both of them were extremely friendly and patient with everyone. After passing the border control, you are now in the baggage claim, which in my opinion is nicely decorated with plants with a nice view of the apron itself too. My luggage did arrive early as I had priority and all that was left is to catch my bus to home. 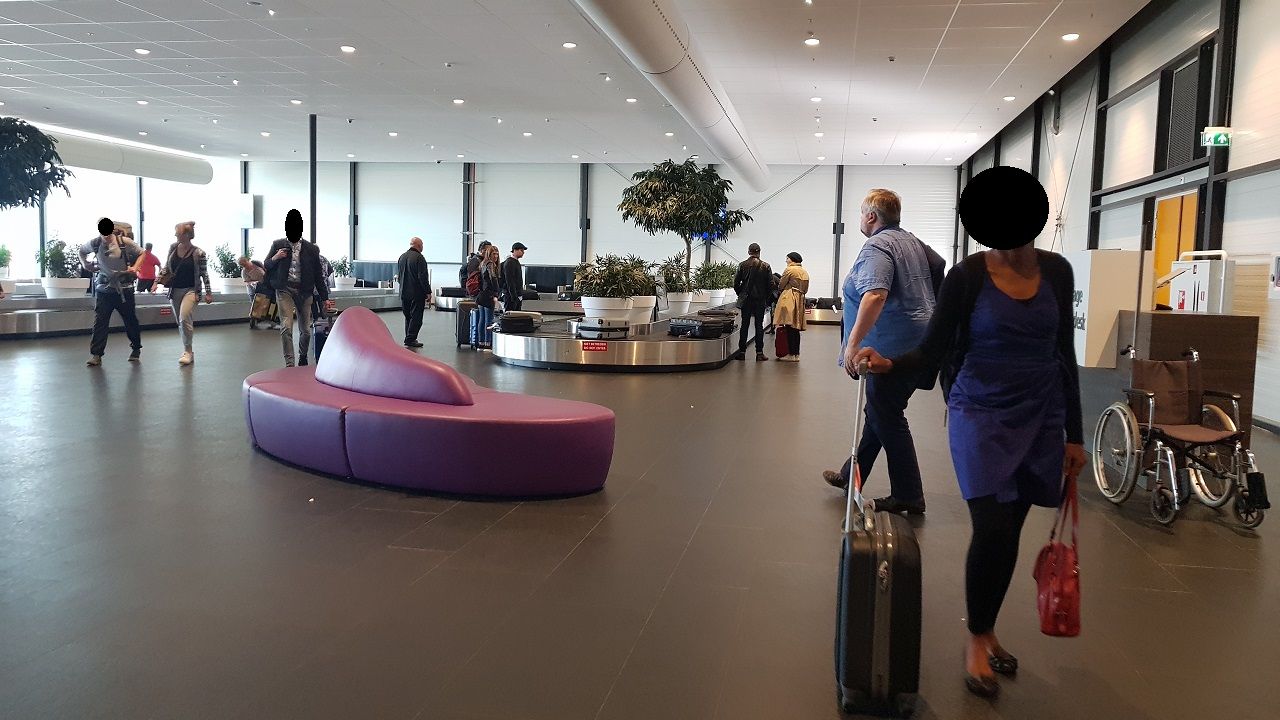 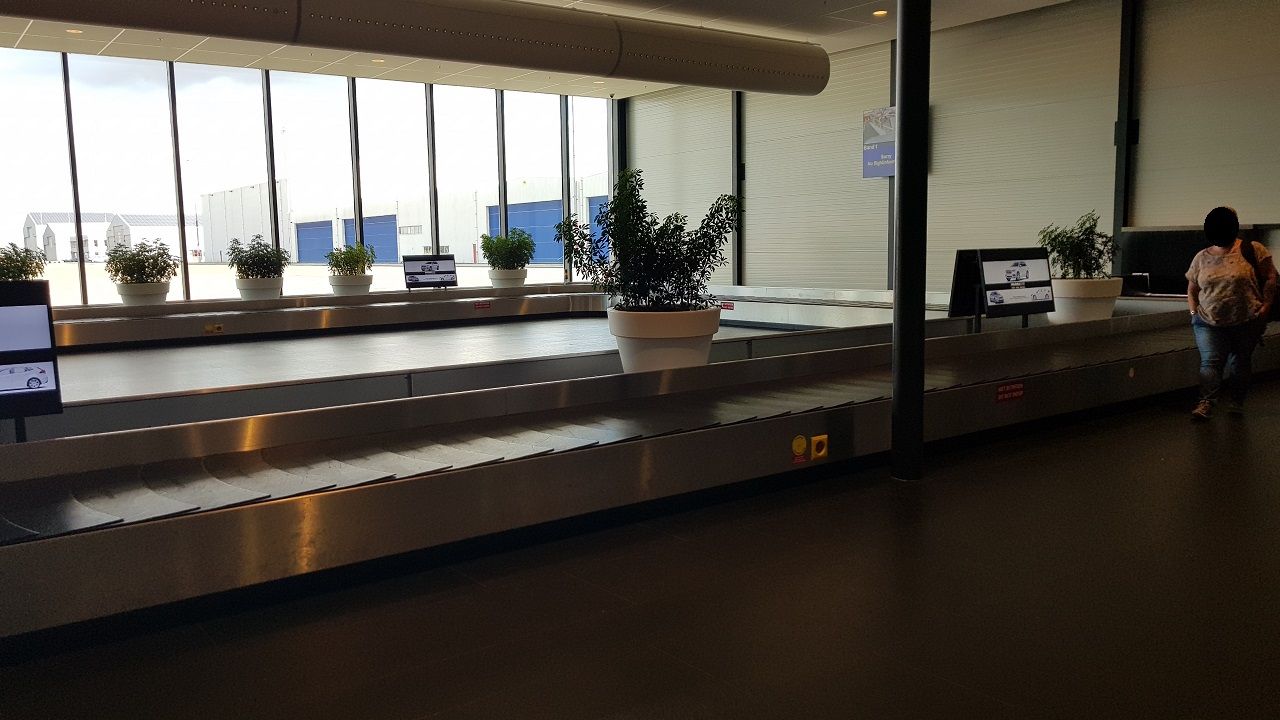