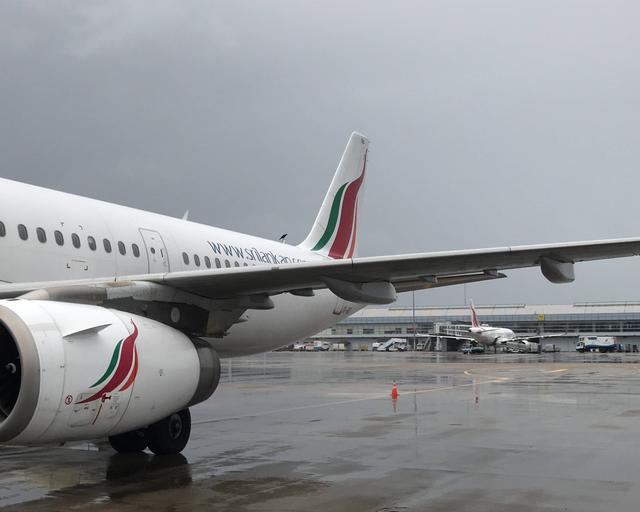 Hello and a warm welcome to Trip Report 26!

Chennai was absolutely Fantastic! Quite unexpected to be honest as expected the "Old Chennai" which I was used to more or less
The Metropolis had seen much development whilst i was away, with many shopping malls. cleaner roads (a few of them were made one-way too which was pretty confusing). India on the other had had become Credit-Card friendly with almost 98% of the shops accepting Internationally Issued (non-Indian) modes of electronic payment!

Ola and FastTrack were not alone in their respective markets now thanks to Uber which established its place in India too which was by far something worth mentioning! also not forgetting UberEats and Swiggy!

Moving on to the FR!
After being ripped off by a Prepaid Airport taxi to get from the airport to the T. Nagar area, I decided to book an Uber at half the price to get to MAA for our flight back to CMB.
Our ride took us to International Departure's at MAA, arriving 4 hours prior to departure 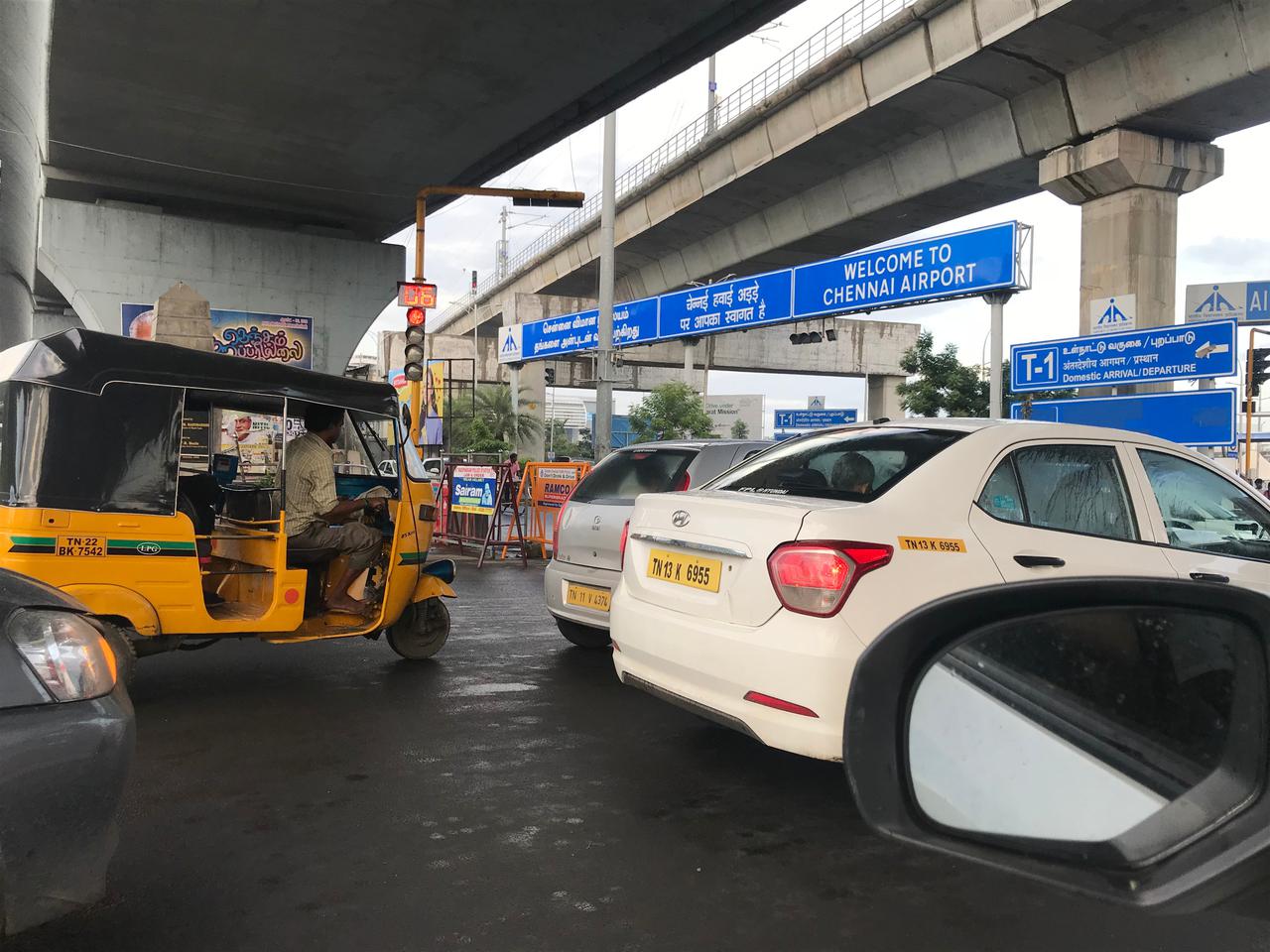 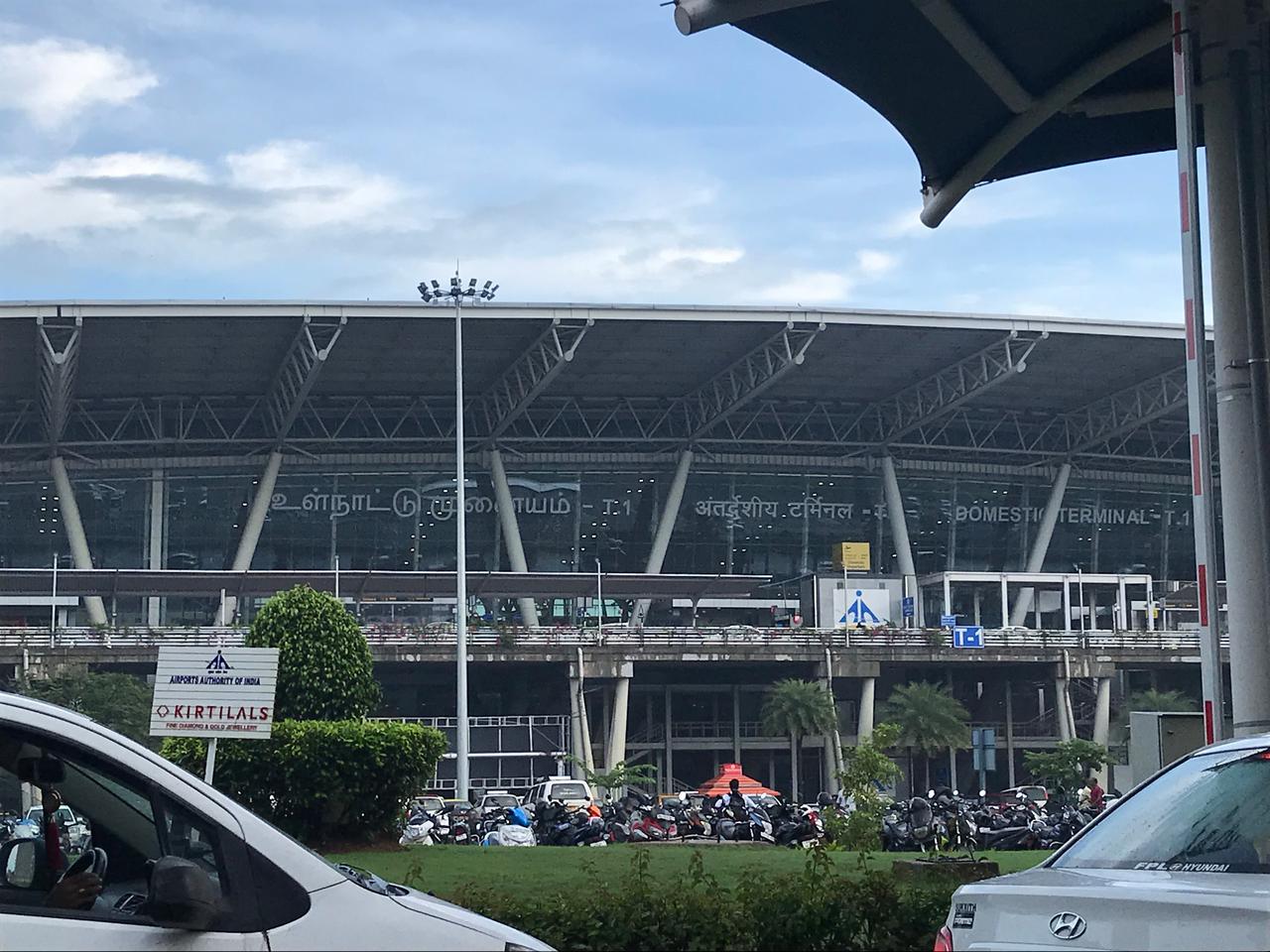 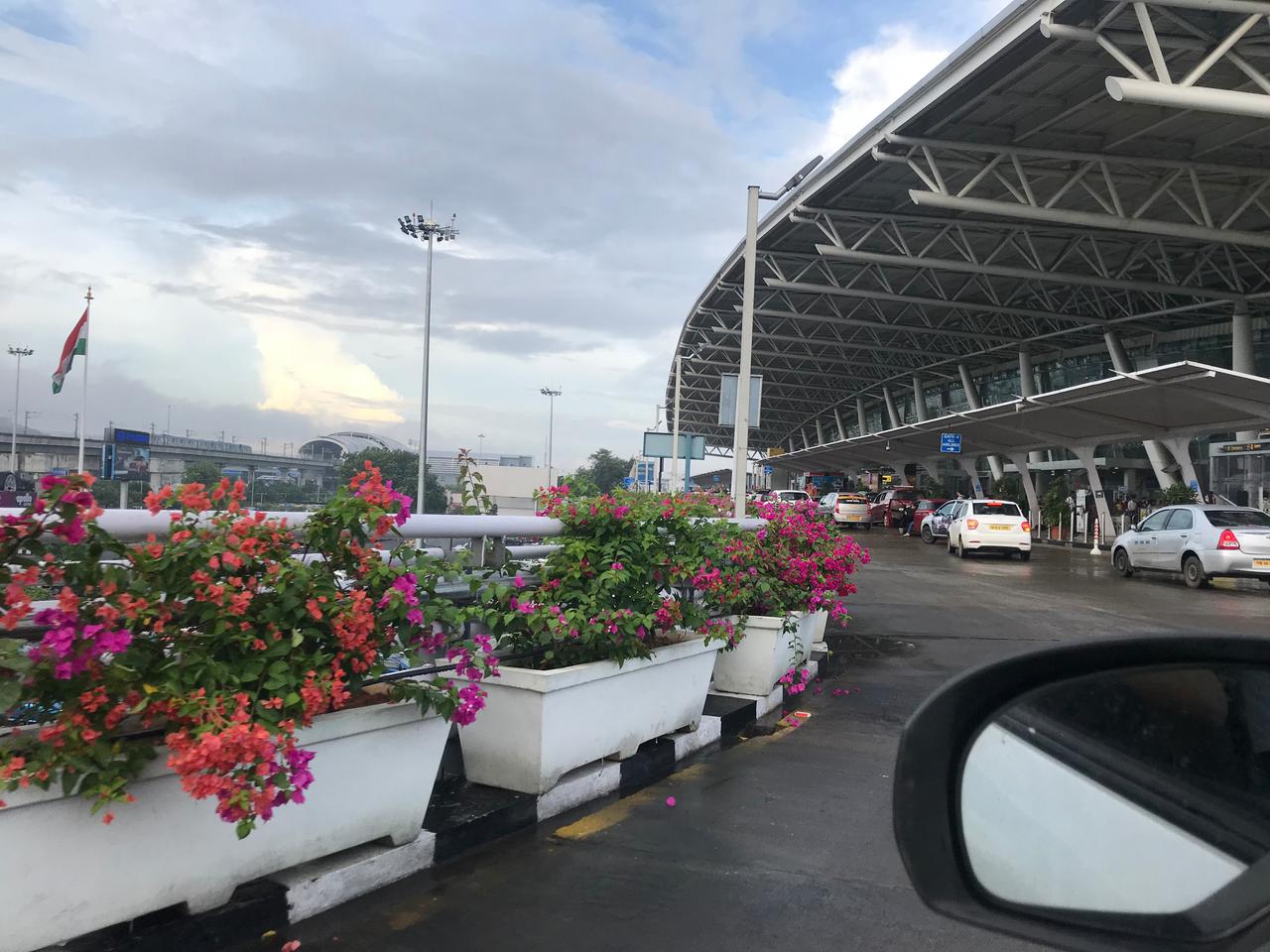 The new Wing of the Terminal looked so much better than CMB! A modern layout welcomed us into the new Terminal after the initial security check. Check-in counters were opened and as we were the first few Passengers present. In my case I just had to drop off my Bag as I checked in online the night before, with the intention of securing a decent seat at the forward cabin, expecting either an Airbus A320 Neo or a A321 Neo. Mum decided to check in the usual way at the airport this time. Check in was fast and efficient and with a few French Passengers checking in too for the short hop to CMB

With our BP's printed, it was now time to clear Immigration and Security which was a breeze!
Just the regular body-check and hand luggage having to go through X-Ray as they usually do at all Indian Airports i'd been to.
Many Passengers were heading to Abu Dhabi on Etihad, some to Kuala Lumpur on AirAsia and the next lot were taking off to Bali via. Kuala Lumpur on Batik Air (Malindo Air)

With a few more hours for our flight arrive in CMB, I decided to take a look at FR24 to see what i'd be flying
4R-ABQ it was, the second of two Ex-Qatar Airways Airbus A321's now in operation with Sri Lankan Airlines. Not a Neo though! Pretty upsetting, even though a good part of me was satisfied to not to be flying on an Airbus A320CEO again  (The CEO's that usually operate to MAA/BLR/TRZ/IXM etc are UL's older aircraft as well as the Ex-Mihin Lanka fleet, definitely not my cup of tea)

So this was my routing for today:

In desperate need of a decent breakfast, I began by quest to find something out of the box, something Non Vegetarian and Spicy!
The Air-side had a few decent options available, ranging from sandwiches,tea, coffee and snacks along with a commendable duty free. A contrast to my previous experiences at MAA which had zero facilities 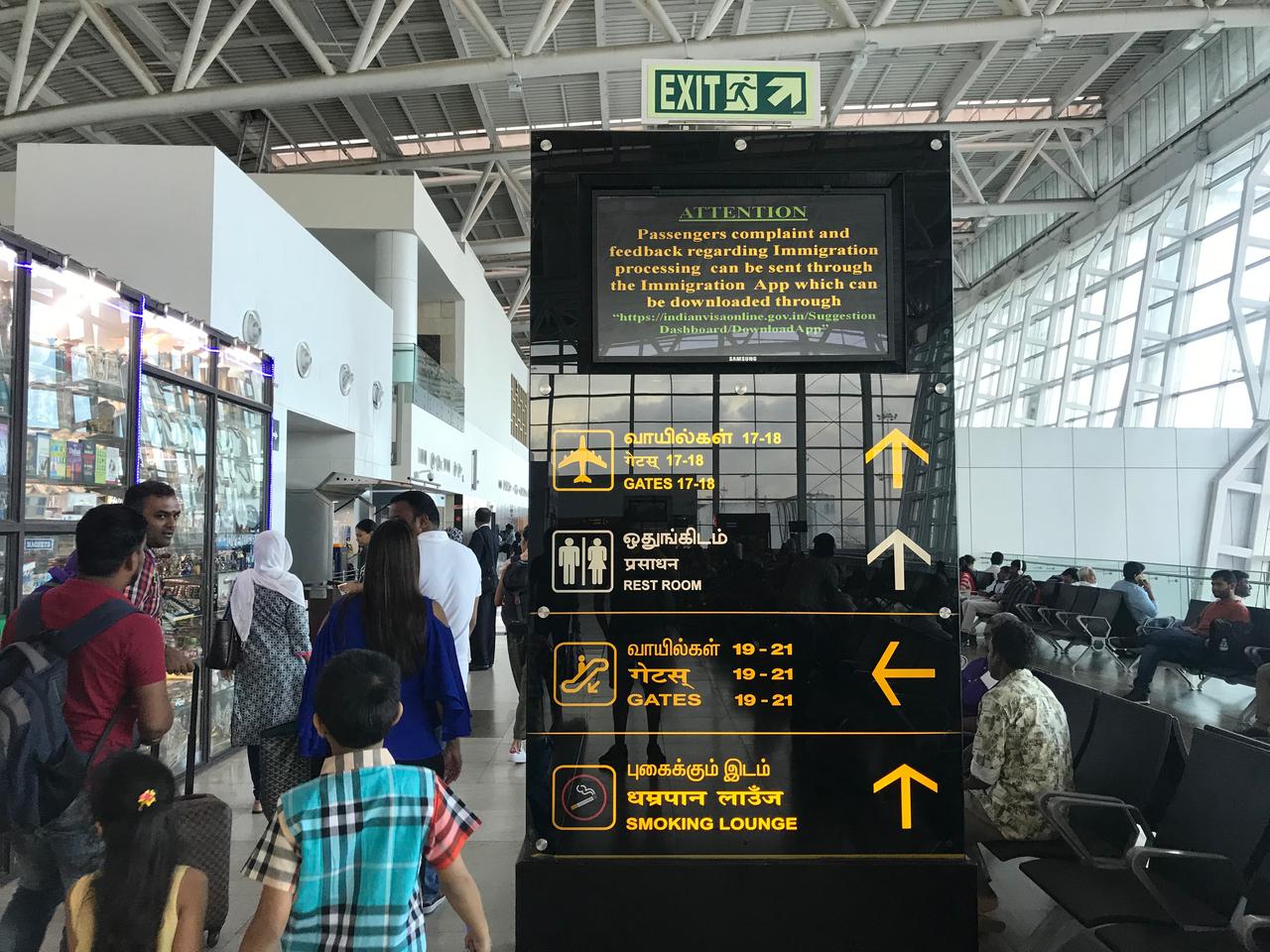 Then I found Momos! something that i had left un-ticked from my foodie list for a couple of years and was definitely the perfect snack (breakfast)!

Being an absolute novice where Momo's were concerned, the guy at the counter recommended fried one's.
So basically a Momo is a type of South Asian dumpling; native to Tibet, Bhutan, Nepal, North Indian region of Ladakh, Northeast Indian regions of Sikkim, Assam, and Arunachal Pradesh, and Darjeeling, West Bengal, India (Wikipedia)

Preparation took around 10-12 minutes, presented in a neat box with spicy sauce. Taste and flavors were spot on! However, the outlets POS Machine wasn't working which meant that I had to pay cash

(More food at the end of the FR) 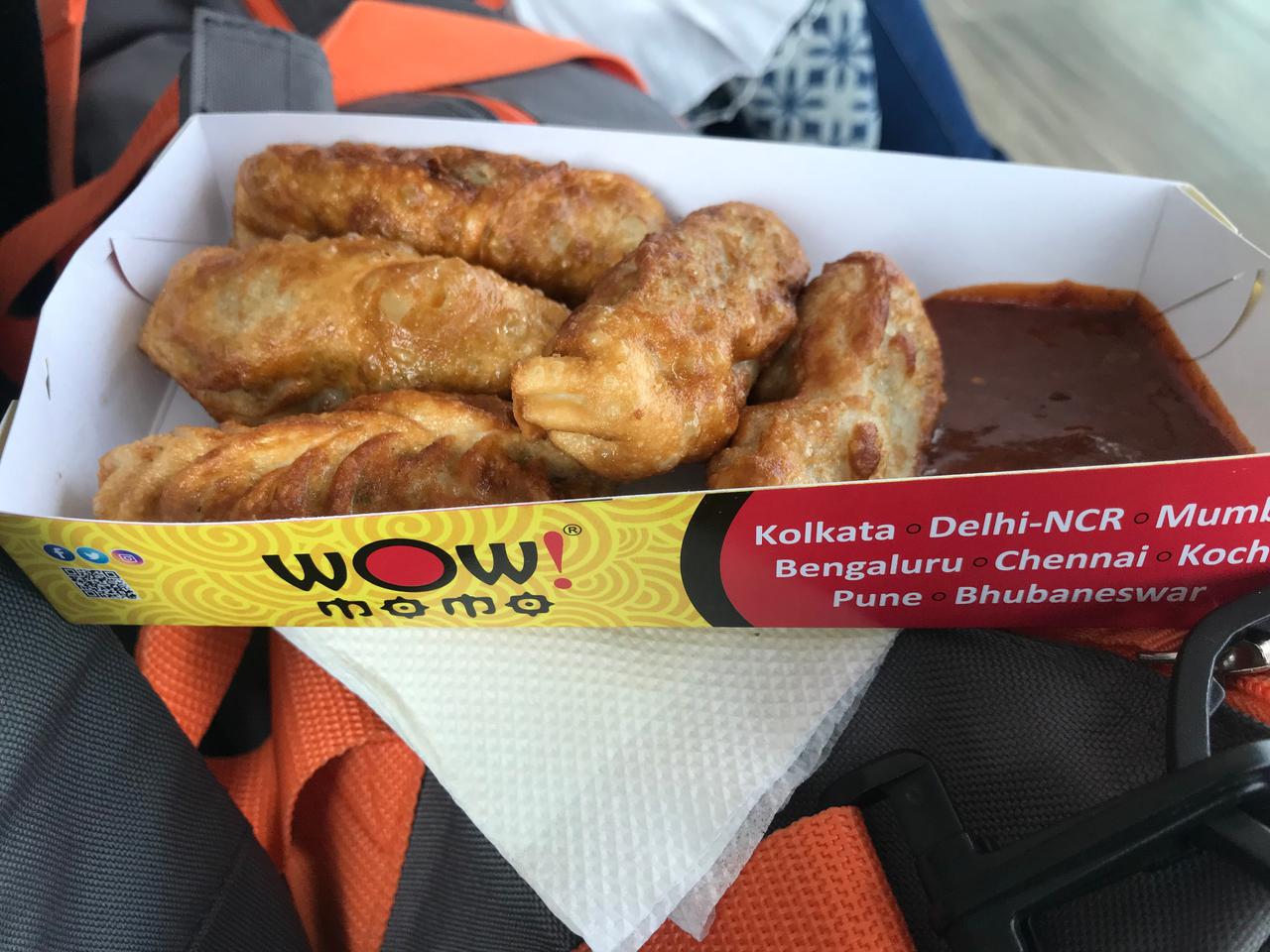 A bit of spotting prior to departure

AirAsia Airbus A320 on a quick turnaround back to KUL 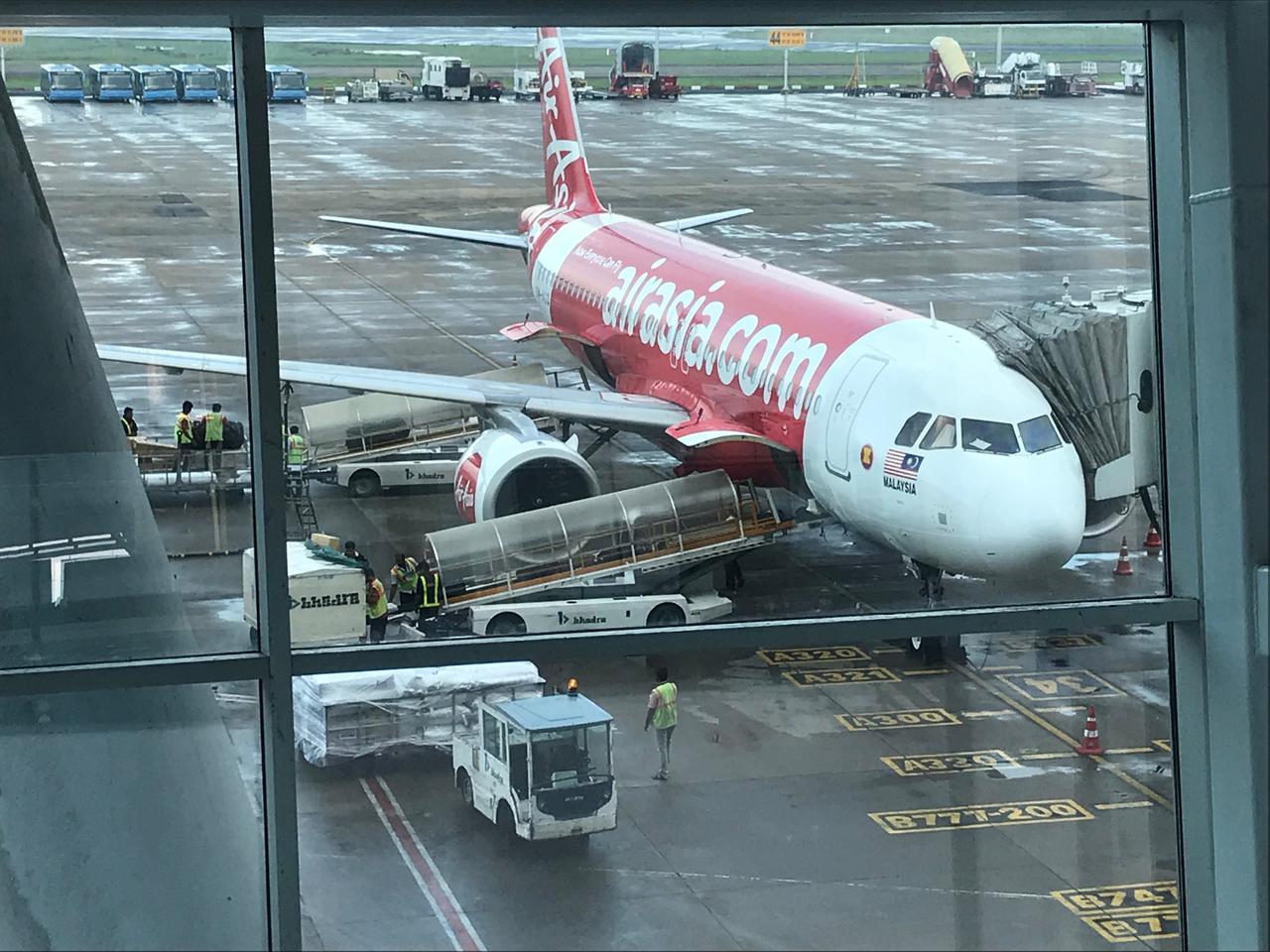 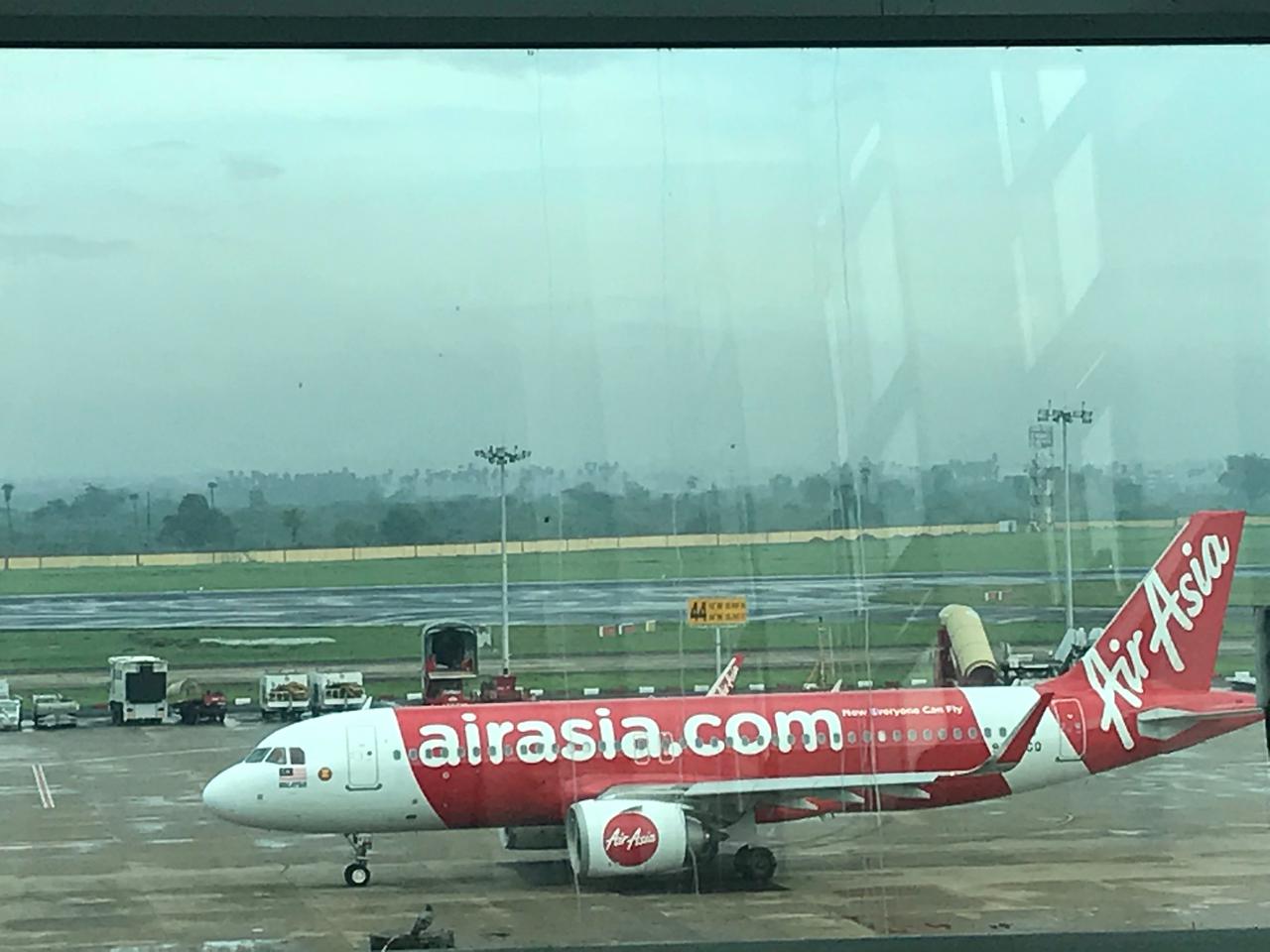 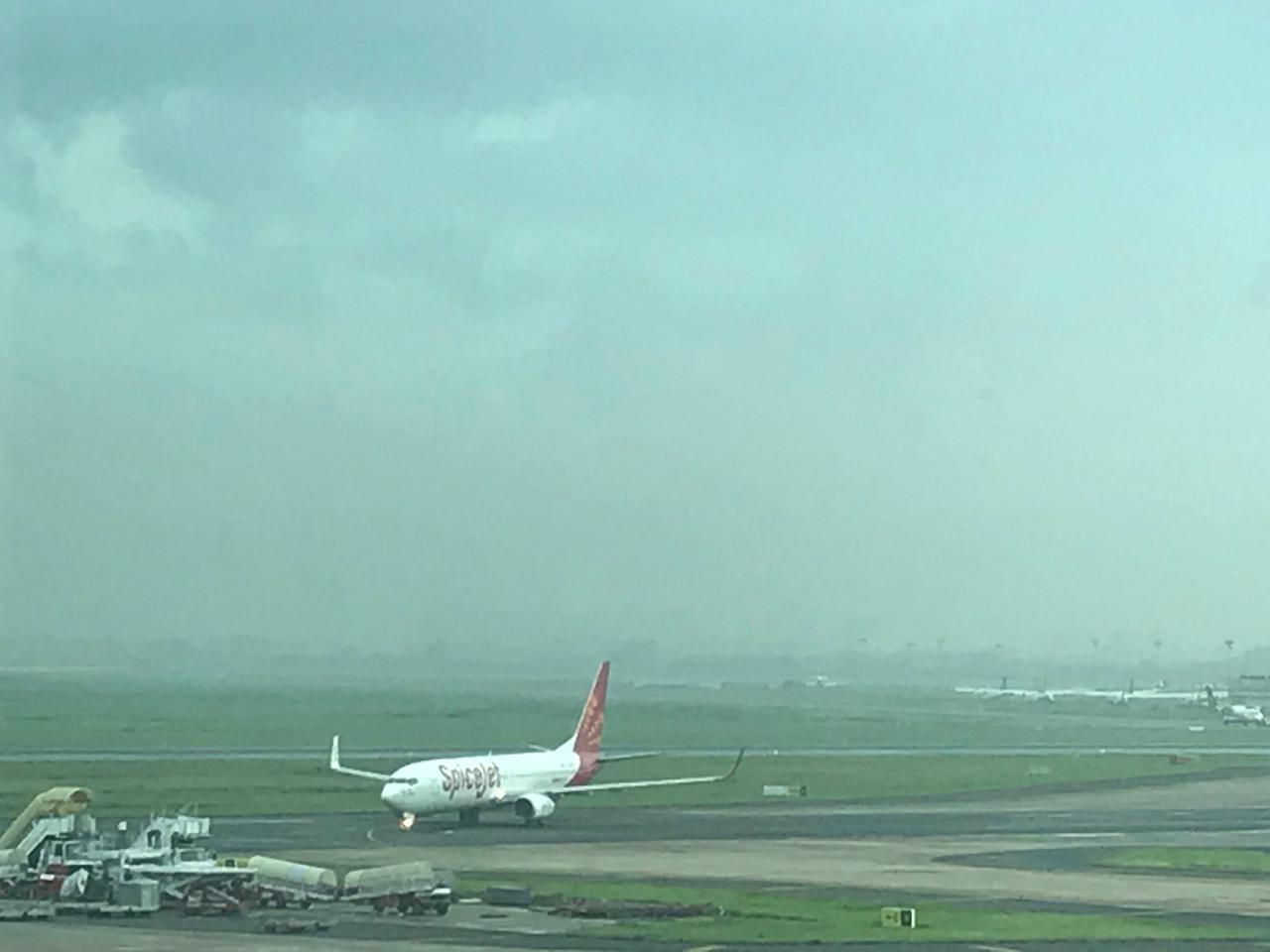 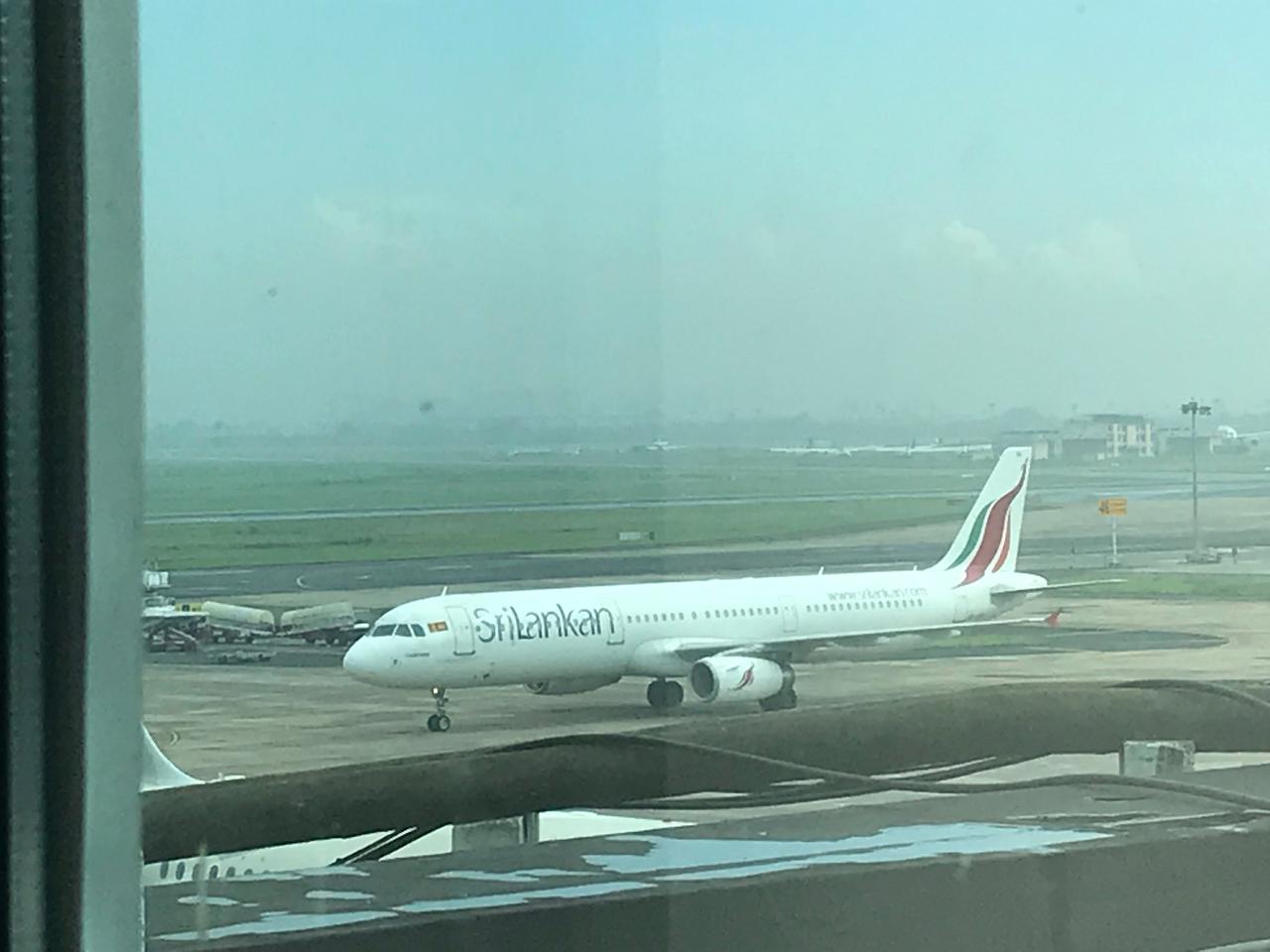 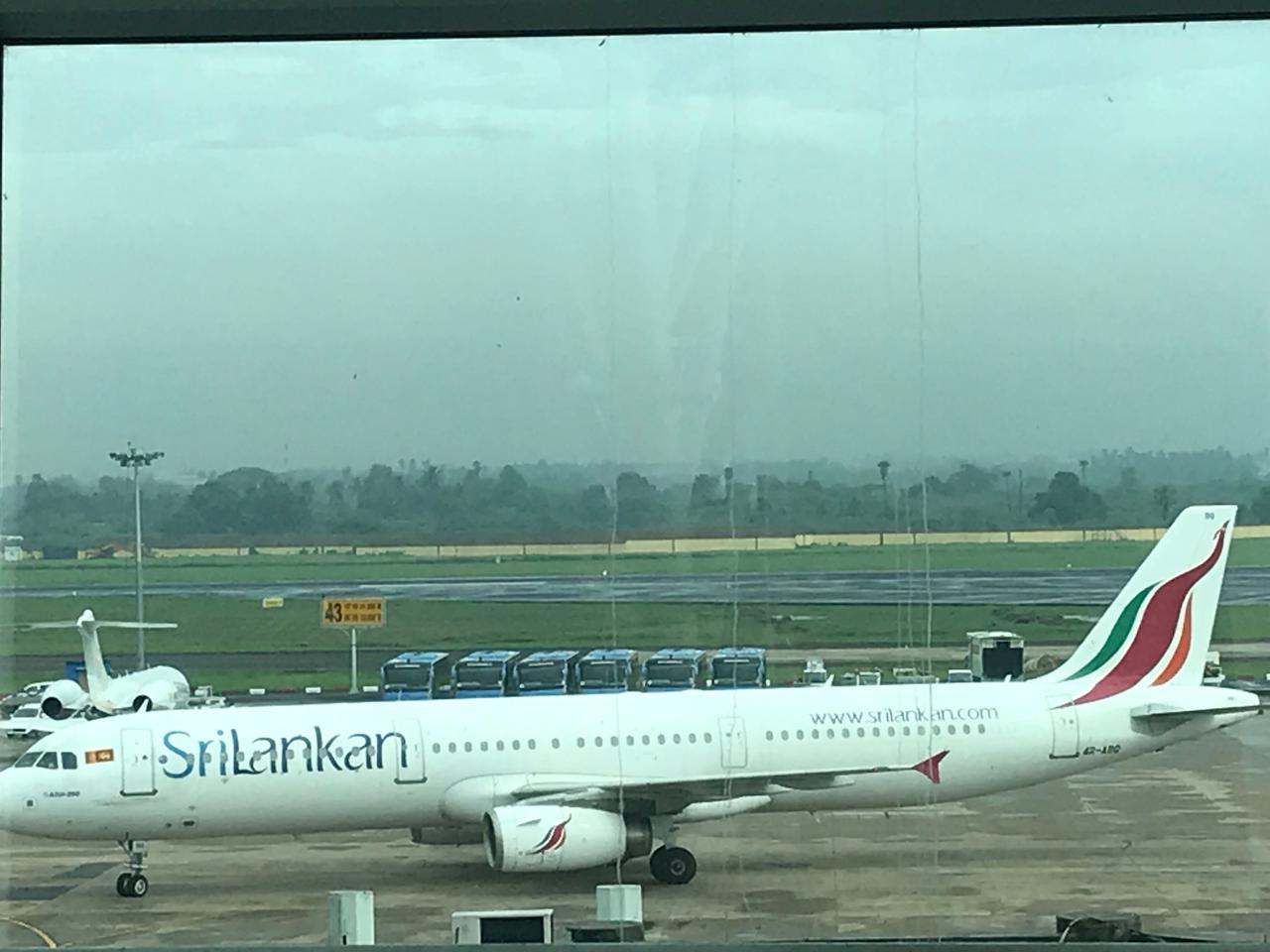 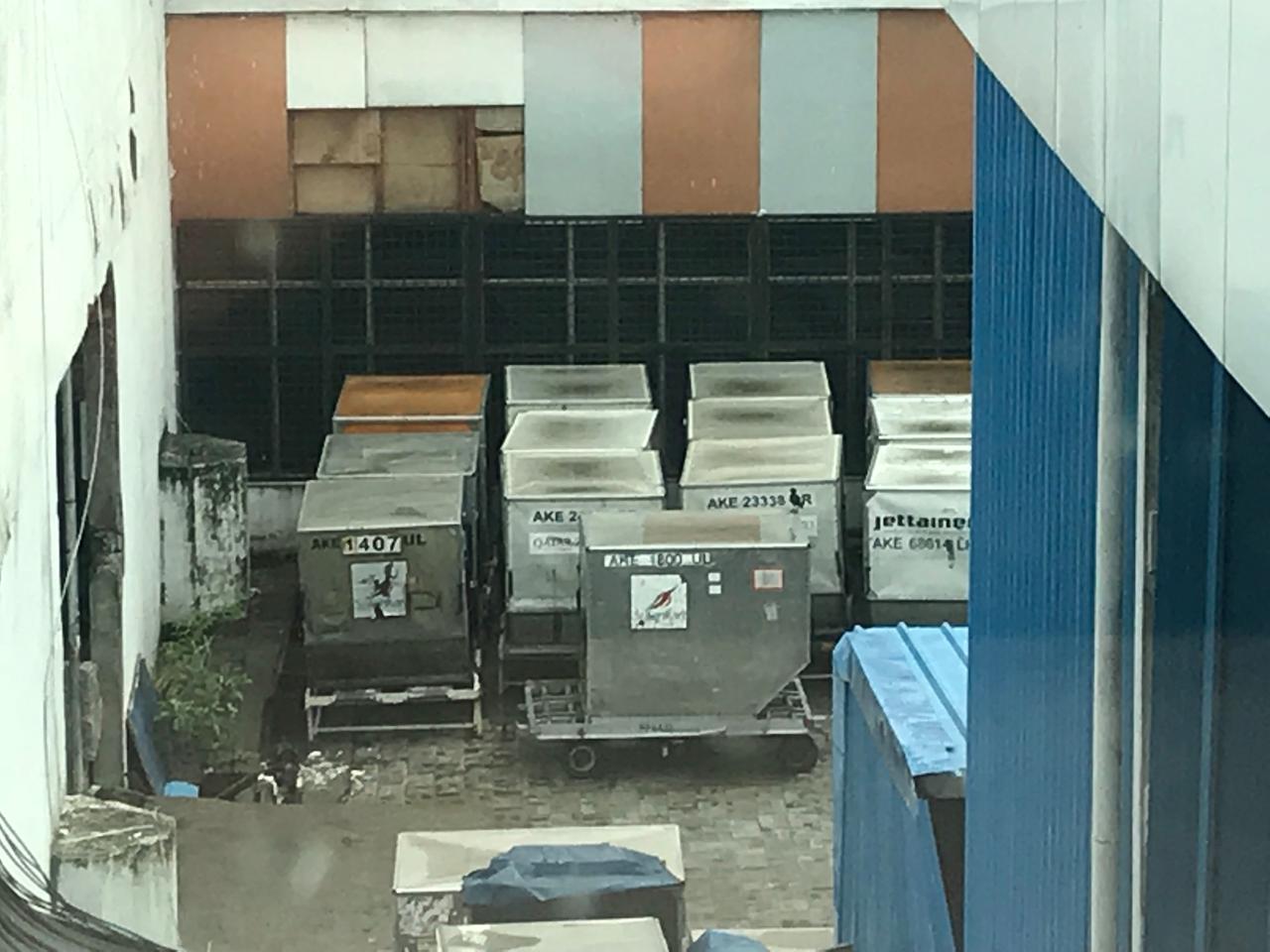 Boarding was announced a few minutes after the arrival of the aircraft, with passengers being directed to the gate at the Old Terminal. Getting there took us around 5 minutes, reaching the dilapidated Old International Terminal lining up to the boarding gate.

Chaos erupted once again with many passengers failing to follow instructions of the ground crew who finally manged to bring about a scene of order and having passengers segregated as per their seat numbers. J Class passengers were also made to stand in a separate line in order to be boarded first

Photography wasn't encouraged, probably their way of not letting out much publicity of the condition of the Old Terminal
We then made our way though the old, dirty aero-bridges  to board ABQ. The degree of pushing and shoving was typical subcontinental mentality to board first! Sri Lanka is thankfully so much more civilized!  I presume this lot think that the aircraft would just take off before they board. Sadly, some people never learn!

Making my way to my seat left me cursing UL for the last minute change!
8A on this A321 was on the Emergency Exit row which was good in terms of leg room, however my view was severely restricted!

I basically had just a bit of the Window behind me to utilize that almost guaranteed my FR to be shorter than planned
Honestly I do wish airlines would notify passengers on such seats at least on the Check-in page as this was marketed as a "Window Seat" which didn't have a window!

With the aircraft full, I barely had any options of switching seats, the only ones available being a few in J Class. I regretted not choosing  row 7 or 6 which I believed were the emergency exit rows 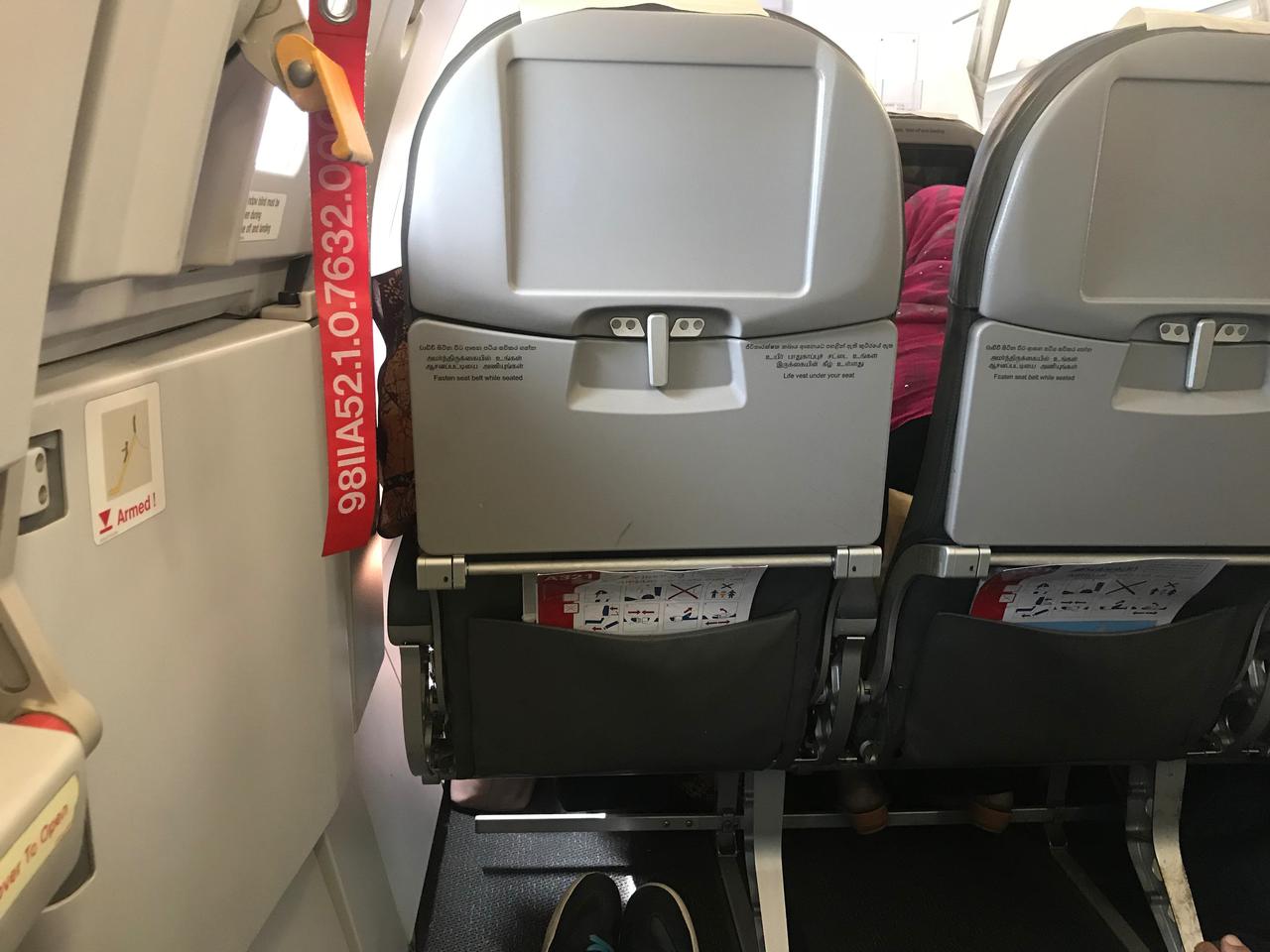 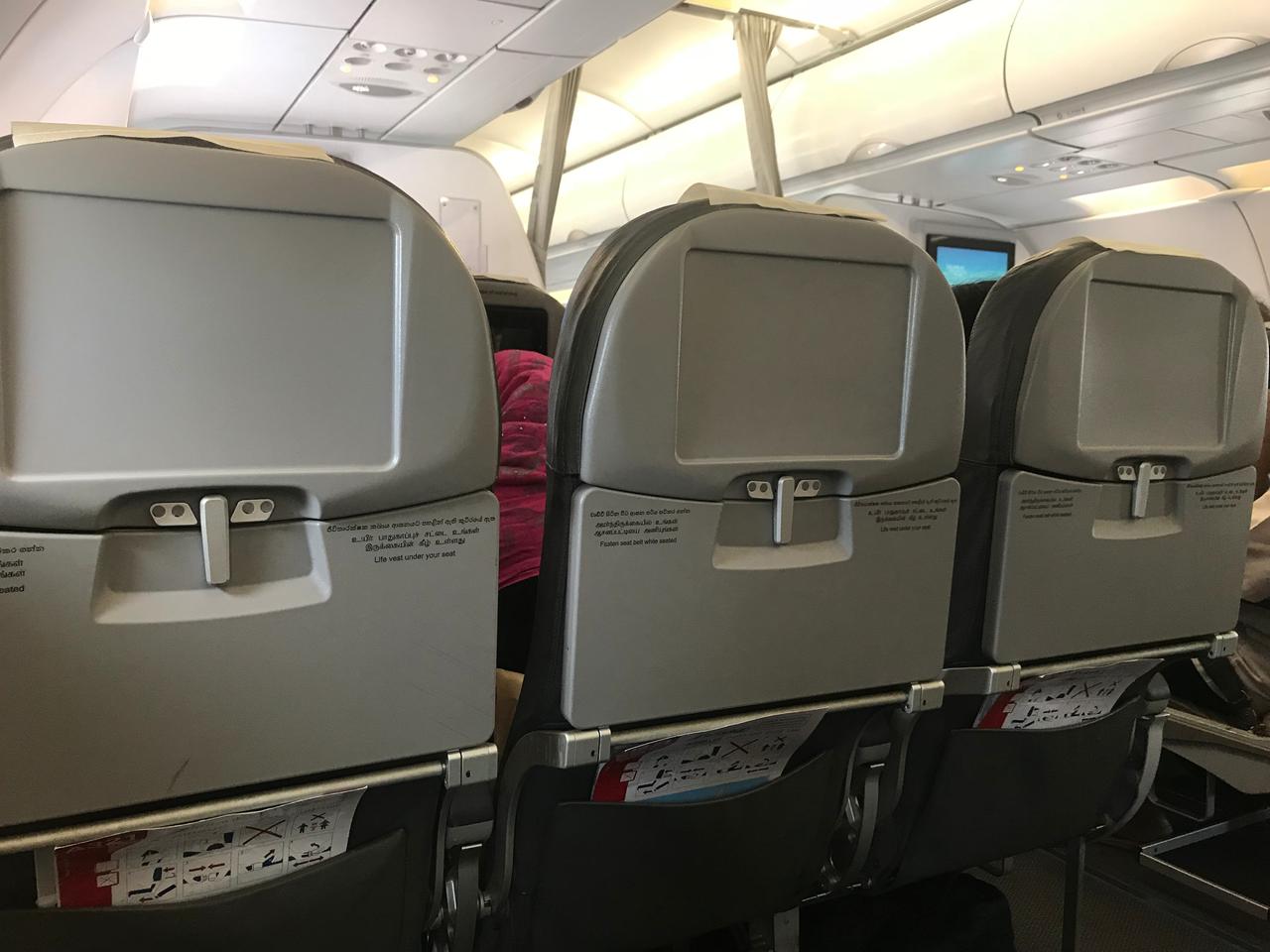 After much effort trying to focus my camera and getting a decent shooting range, I ended up with a satisfactory angle which I had to maintain throughout the flight sitting down in a very awkward position since the window was behind my seat 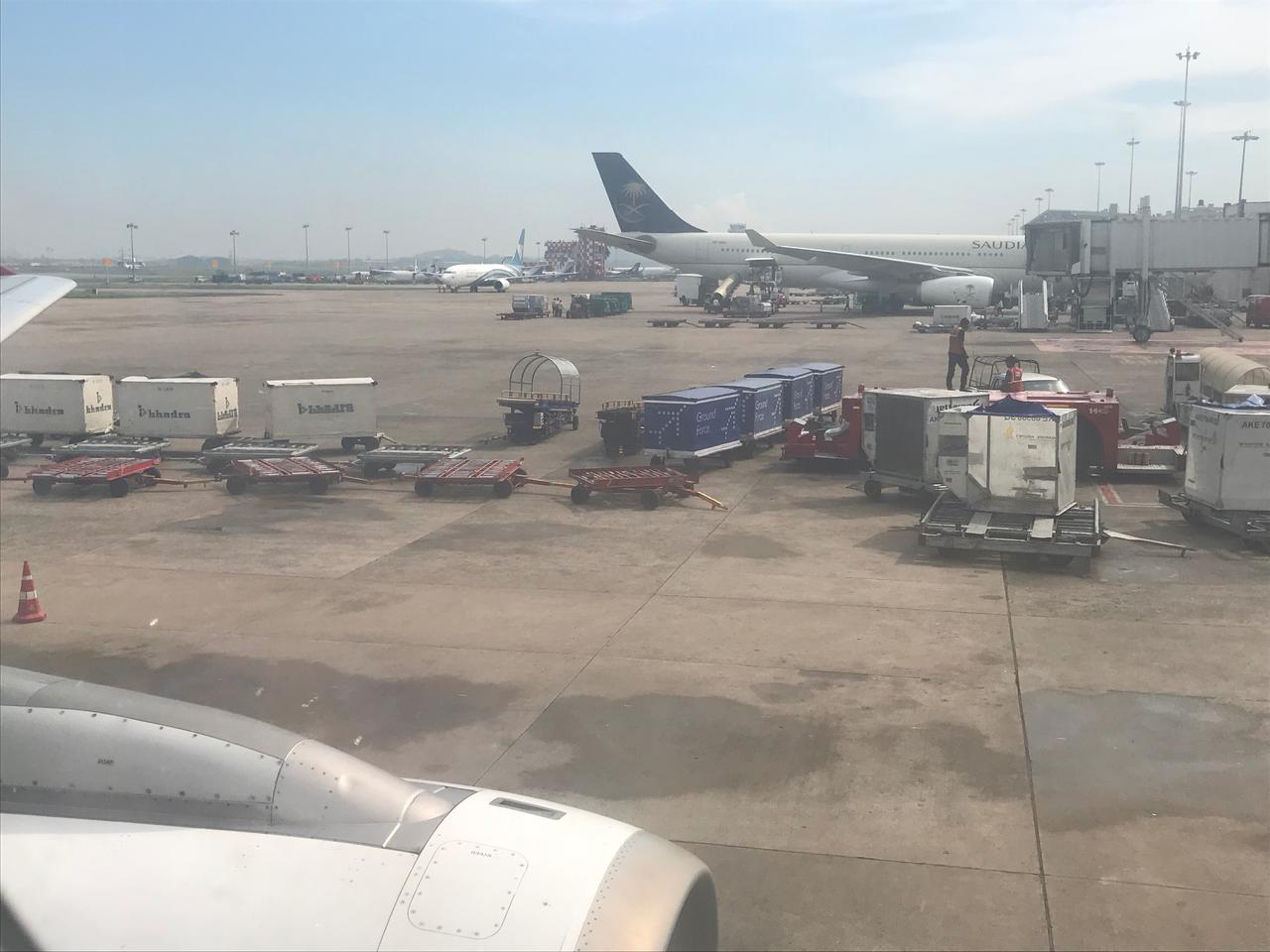 A quick push-back and takeoff followed the routine Safety Video being screened. It was surprising that the crew didn't bother to give any instructions to Passengers occupying seats on the Emergency rows as to how the emergency exit should be opened and how the emergency slides work in the time of an emergency.

All passengers were seated down and water was distributed while taxing to the runway, a good gesture for such a hot day! 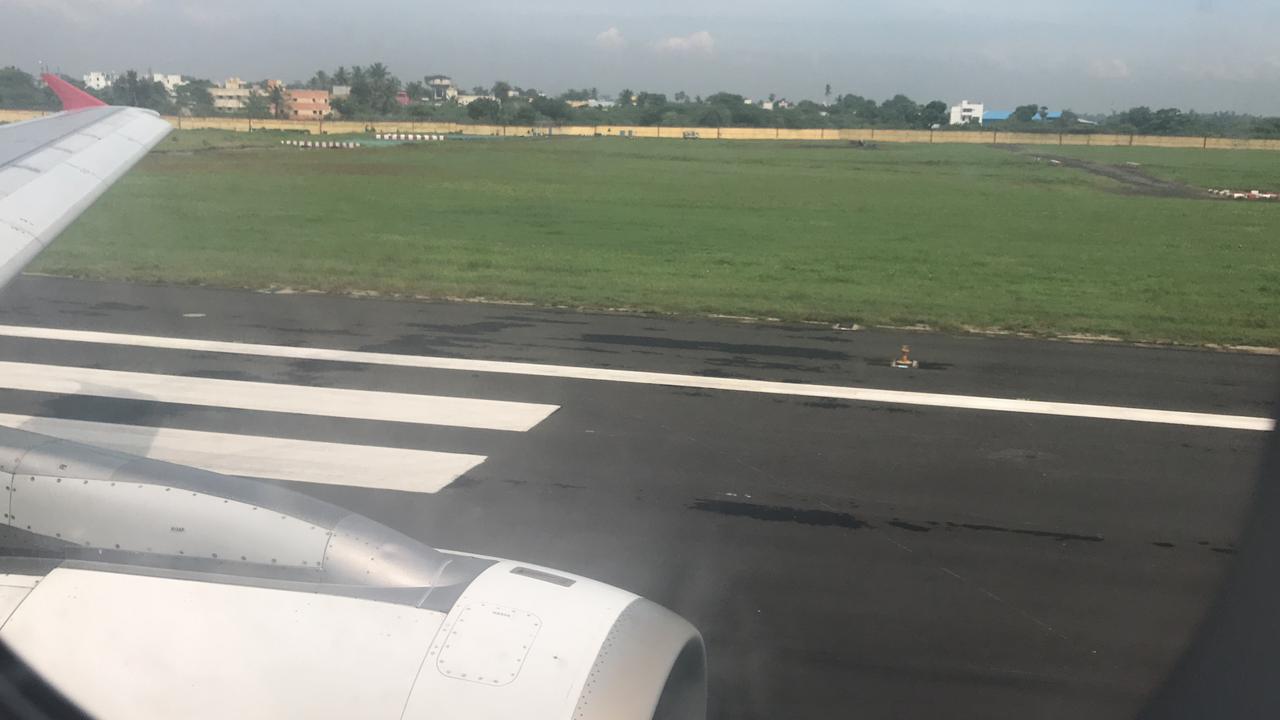 ABQ was pretty noisy compared to ABR! I was indeed closer to the engine and the emergency exit but there were unexpected vibrations that occurred right throughout the flight which was pretty strange

IFE was working absolutely fine, even though I didn't bother to probe in further since "refreshments" were being served and I was more focused on having something wholesome to eat. Brunch maybe?

The Cold Bun!
I couldn't believe that UL had done it yet again!
I'd rather not say anything more about UL's catering on Short-Haul flights (Check out part one of this series for the entire bun review) 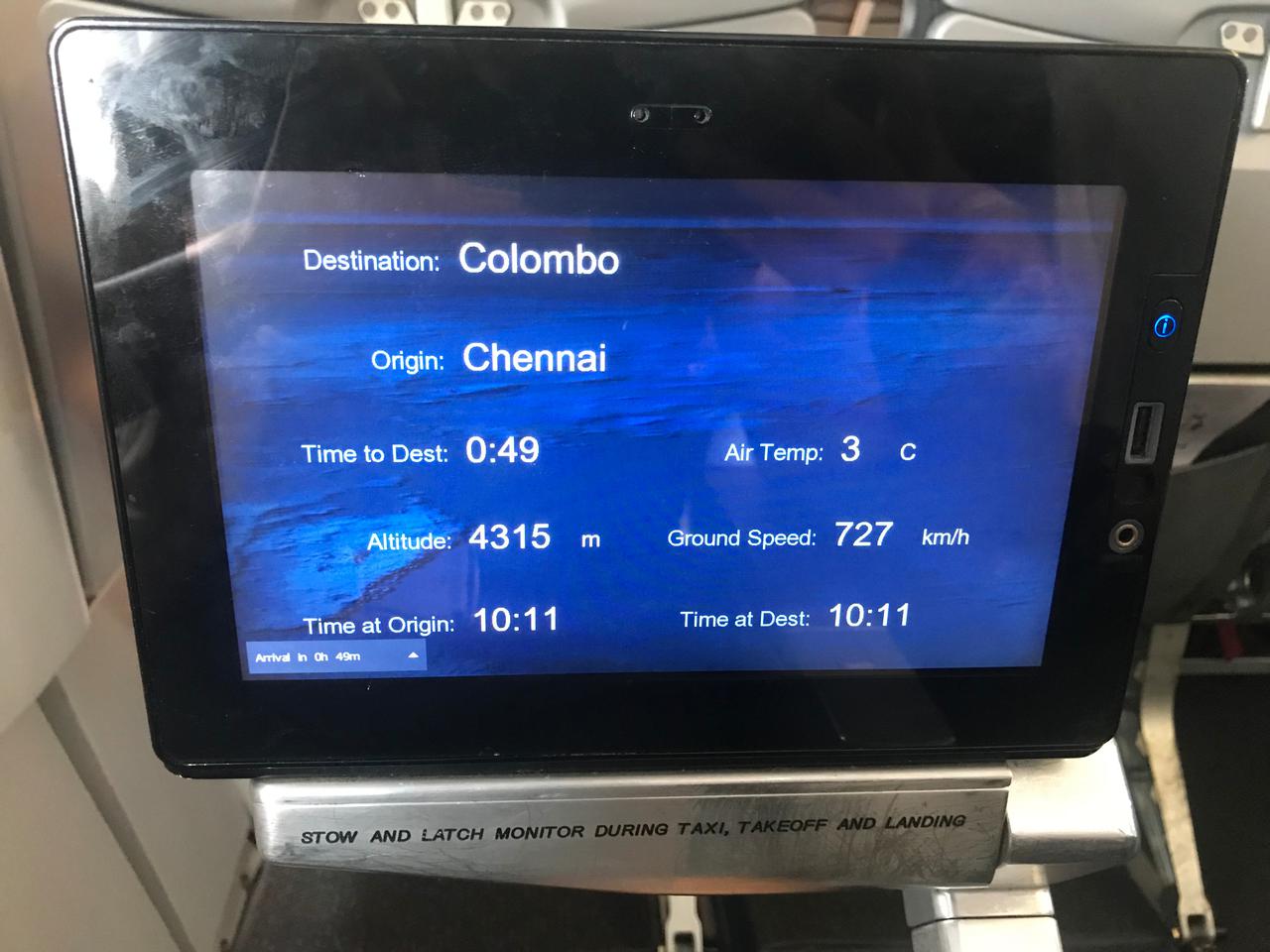 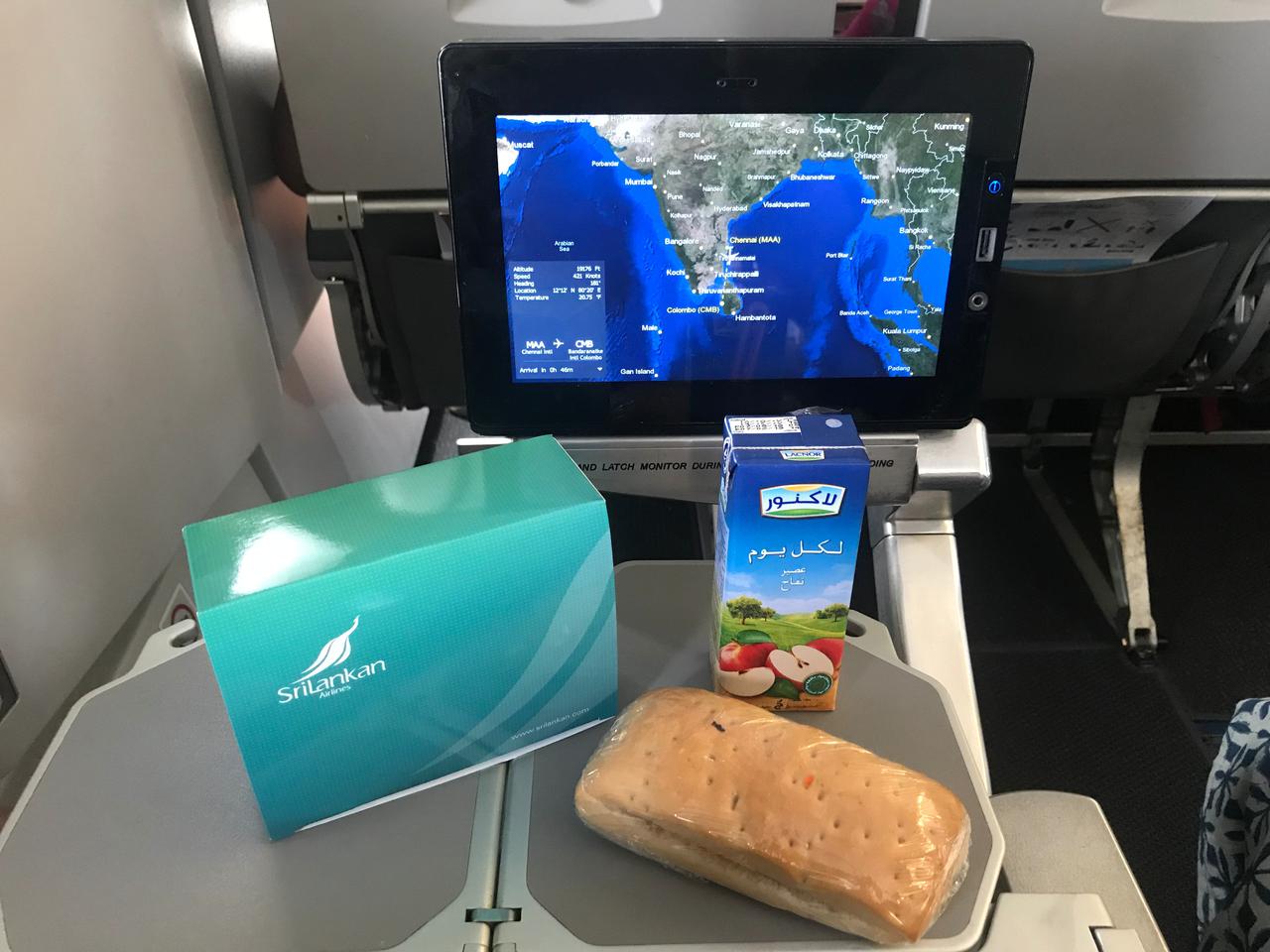 Meal trays were subsequently cleared and descent had already began into CMB
The Crew I felt were new, far inexperienced members who were utilized on this flight. The overall quality of customer service too was one of the lowest in comparison to my many flights on UL.

I too was unfortunate not to be able to take a few stills upon descent and landing due to my unexpected window issue.
We then landed into a overcast Colombo Airport

UL's Birds and Sri Lankan Cargo unit in the background 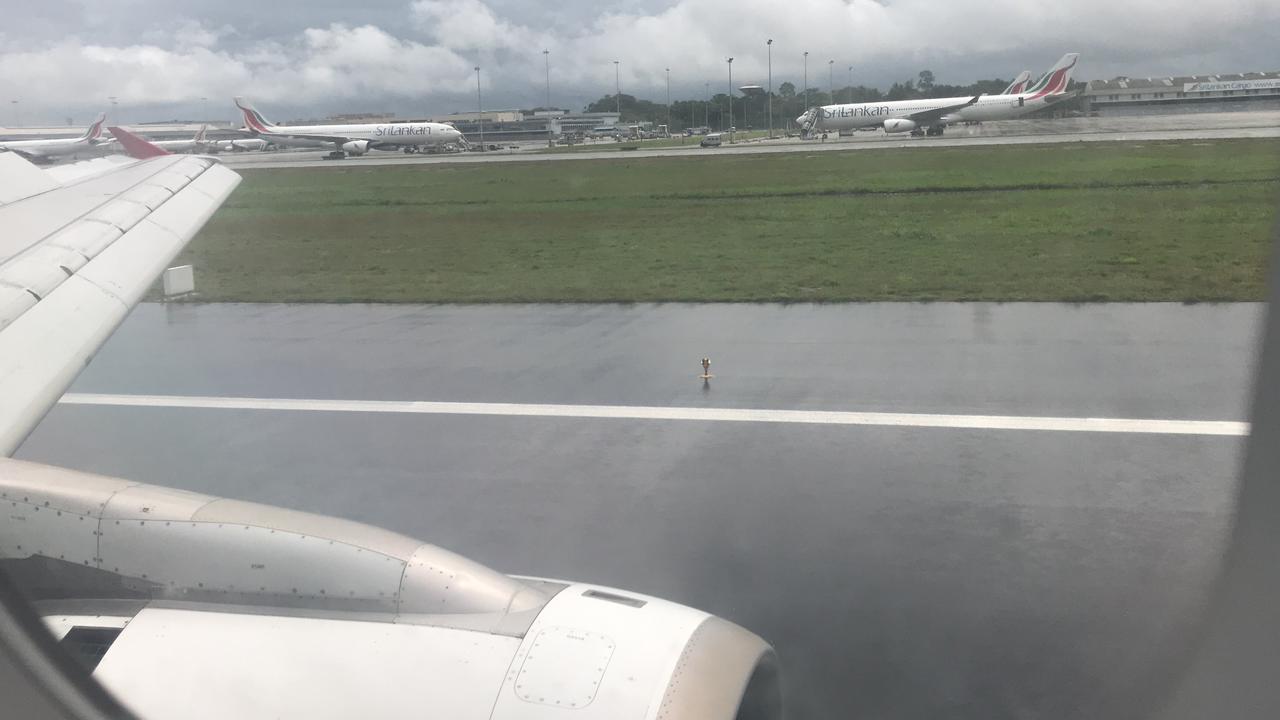 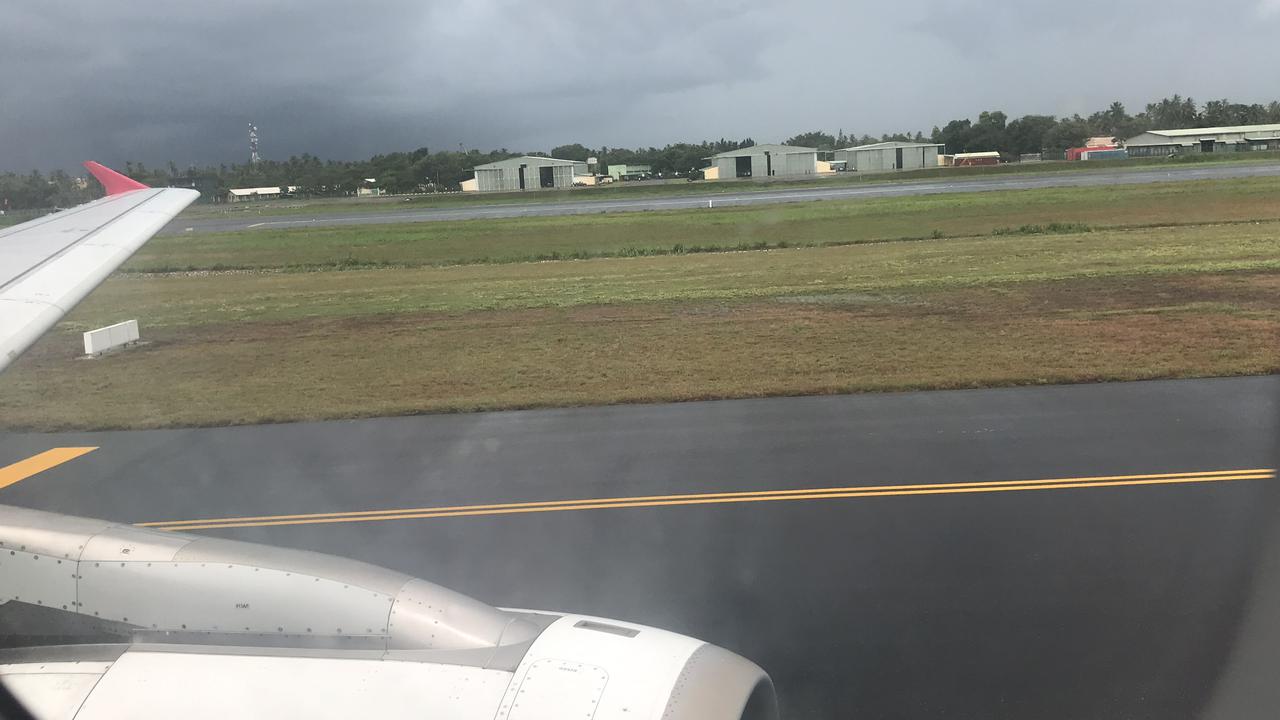 Overcast conditions in my opinion are probably the best for photography! 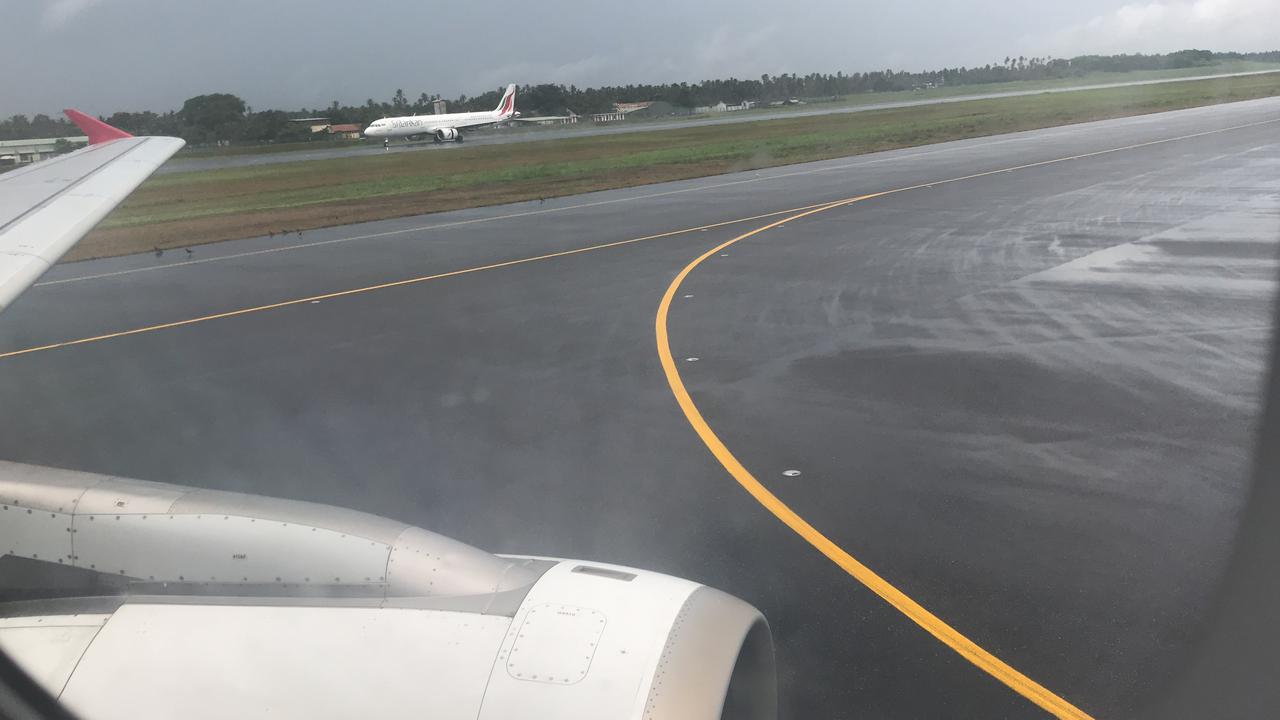 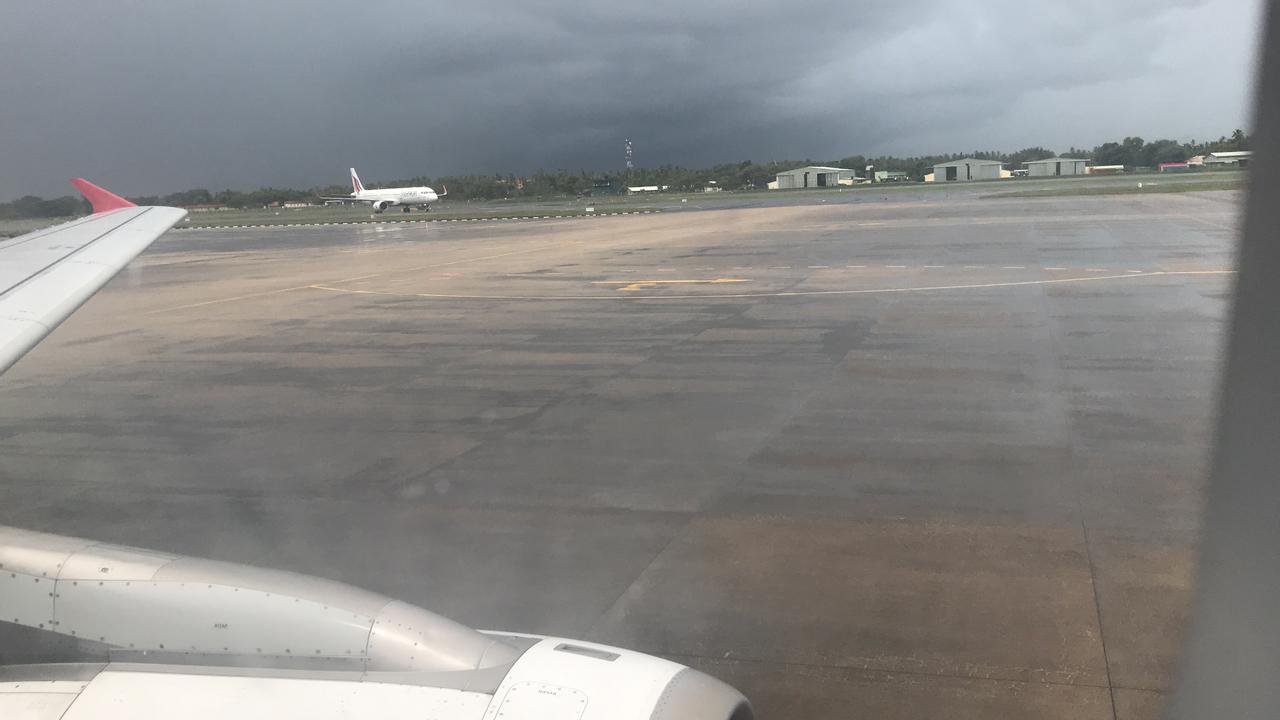 Parking adjacent  to my old friend 4R-ABL, the reason why I started liking Boeing over Airbus.
We the deplaned and headed to the outdated buses that awaited us to take us to the gates 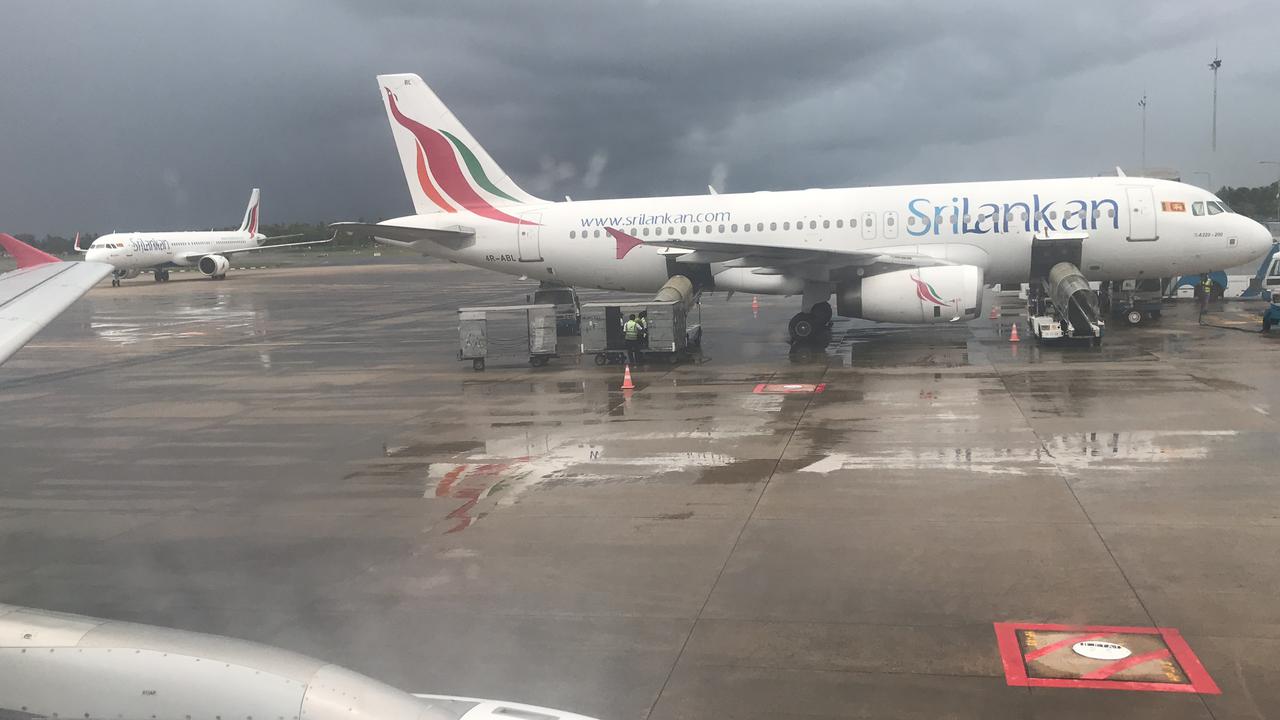 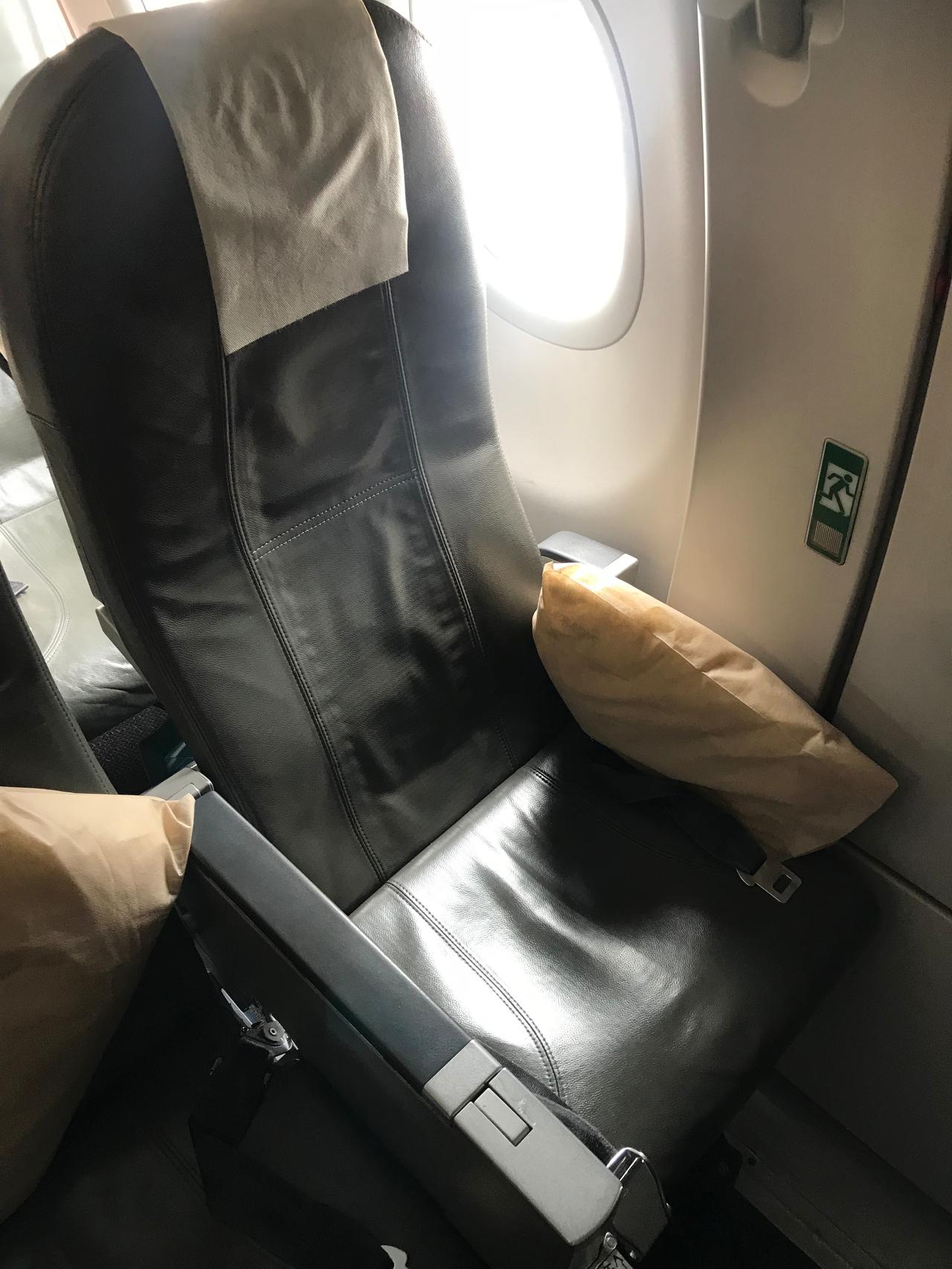 Business Class on the Airbus A321 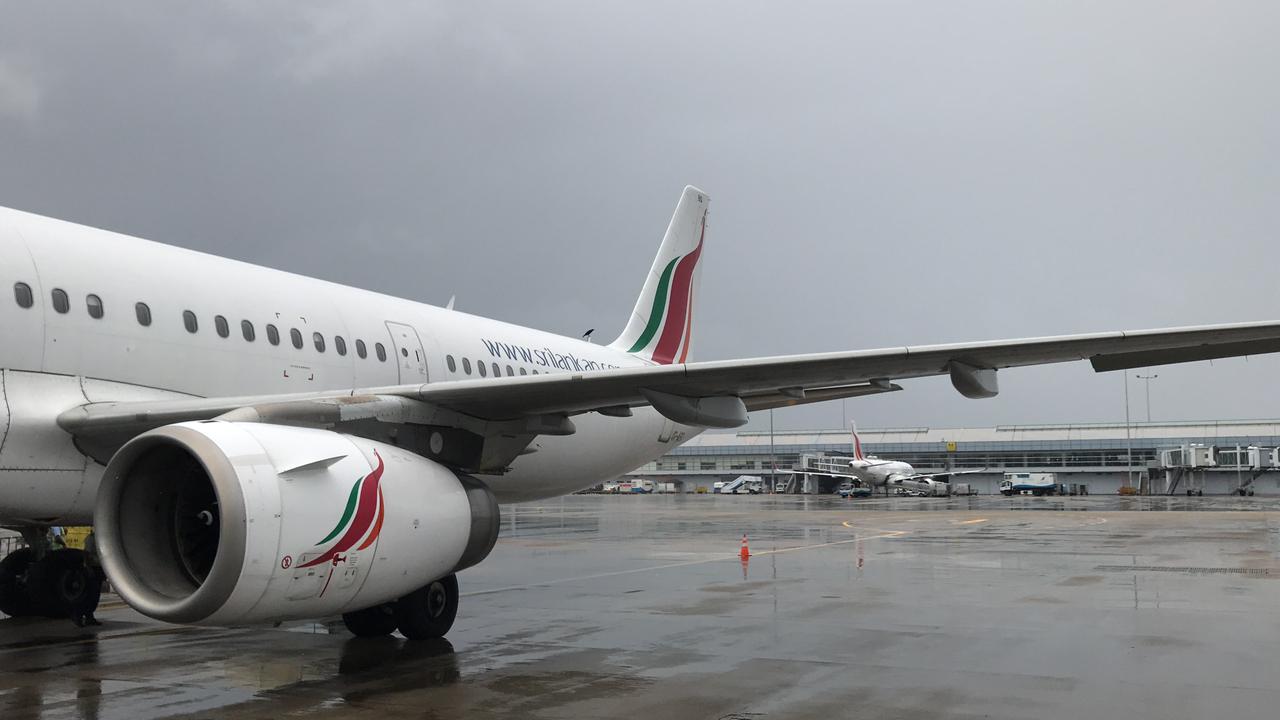 Immigration followed thereafter, thankfully the process was quick and we passed within a couple of minutes heading straight passed the duty free (No Shopping this time) and down to the baggage belts.
Rain resulted in our bags coming out 10 minutes after we reached the pick up area which was acceptable due to obvious reasons

I Travel not only for the Flight, but also for food!
Here's a bit of what I devoured during my four day stay in Tamil Nadu

With McDonald's in Sri Lanka dishing out Curry and Rice to suit the Sri Lankan Platte, McDonald's India focuses primarily on Vegetarian Fast food in South India
Here we have the Chicken Naan and the Rice Bowl (definitely something to try out the next time you're in India)

My Ottoman side craved Shwarma! and at the fist sight of Shwarma I went absolutely nuts!
I don't recall the name of this place though, but they are located inside the food court if Express Avenue (EA Mall)
I opted for the Shwarma and Biryani Combo which was out of this world!

I recommend Archana for their sweets!
Try out their Special Mysore Pak

Overall, an average experience
Thanks for Reading! stay connected via. FR and YouTube don't forget to Subscribe link for my next series
Comments are welcome!
That'd be all for now,See you in the next takeoff!