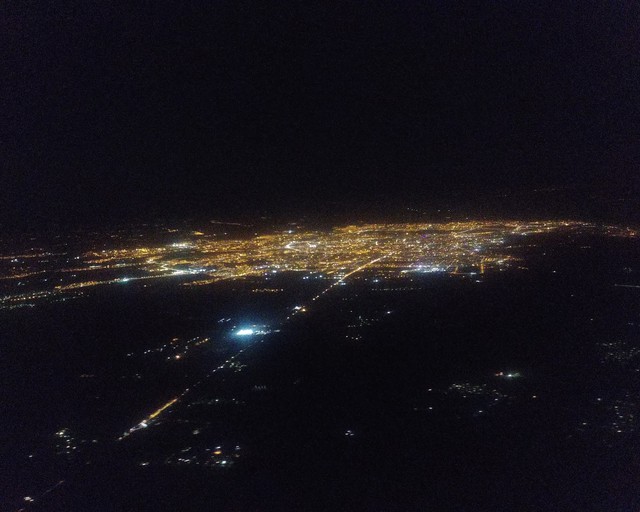 This is my first report in english, for this special opportunity I would like to share my trip on Air Arabia Maroc which is a subsidary from Air Arabia not reported yet in english on Flight Report.
Please note that is not an exact translation from my french Flight Report, I chose to make things a little bit different.
I would like to apologize for the missing photos due to the night fly.
If you want to see the original report (in french) click here.

I can't remind the last time I flew by night, it was a good experience to renew with night fly! I chose to go to Strasbourg for my Christmas holidays with Air Arabia, a company I really appreciate for traveling from/to Morocco.

Originally the routing was different but because of the late change of Moroccan time zone decided by government. So, the routing was the following routing with an expected take off at 19:05 (originally it was 18:05), landing in Strasbourg at 22:05 (not delayed).

I have booked my ticket a long time ago, I chose the “Extra” fare which include: a 30 kg checked luggage (my best record is 27 kg ?), a 10 kg cabin luggage, a complete meal, either seat you want (I chose the 1 ALPHA seat, which is the best to my mind), and 2 flexibilities on the ticket.

The flexibility is a good thing, I sometimes use it. For this flight I changed my destination 1 month before the departure, I paid only the rating difference of 12€ for adding nearly 1,000 km (620 miles). The flexibility provided by Air Arabia Maroc is simple to use, you don’t need to call a call-centre, you can make the change directly with your computer.

Fez-Saïs airport is located on a plateau at about of 20 km / 12,5 miles for the city centre. In fact, Saïs means plateau in arabic!

The only reliable way to go to the airport is taxi, it takes about half an hour from the city. And, there is a flat fare of 150 MAD (less than 14€). Actually, there is also a bus line, but I never saw it. Please note, that there is any car rental agency near to the airport, you should go to the city to find one.

To come in the airport, you must show your booking confirmation and your ID document, only passengers are admitted in the airport.

The architecture of the new terminal of the airport is classic and bright. It is built in parallel of the runway, and near to the parking and taxi. There are a lot of bay windows which bring a lot of light. There is only 1 floor in this new terminal, but the ceilings are very high. This airport avoids the several Airbus A320 and Boeing 737-800 to be higher than it.

When you enter in the airport, the terminal is divided by two, on the right there is the arrivals zone, and on the left, there is the departures zone with a dozen of check-in counter.

I arrived 3 hours before the departure at the airport, and the check-in counter for my flight opened as expected. There are not many passengers yet, I was the second passenger in the queue. Then, I leave my checked luggage to the check-in agent who also check the weight of my onboard luggage.

There are not very many things to say about security controls and passport control, you just need to fill a boarding form for each flight even if it is a national flight because there is only one airside zone. So, the passengers are mixed, which is strange for me. This airport is smooth, I never wait more than 10 minutes at check-in or the different controls.

There is a lot of seats in front of the boarding gates, more than passengers, do not worry! The seats are decent but not comfortable for more than 1 hour of waiting.

A free Wi-Fi is provided in the airport, it is easy-to-use, and it works well. But I prefer to use my 4G which is faster. Nevertheless, it is a good point for this airport!

Then, I decided to go to the unique lounge in the departures zone: the Pearl Lounge. There is another one in the arrivals zone, why not?

It is not a huge lounge, but it could welcome 20 persons to my mind. This day, there was not a lot of people as it used to, I never see this lounge complete. Of course, the seats are more comfortable here! A day, I stayed 8 hours in this lounge thanks to Ryanair, because of a delayed flight. Unfortunately, I missed to take more pictures of the lounge. 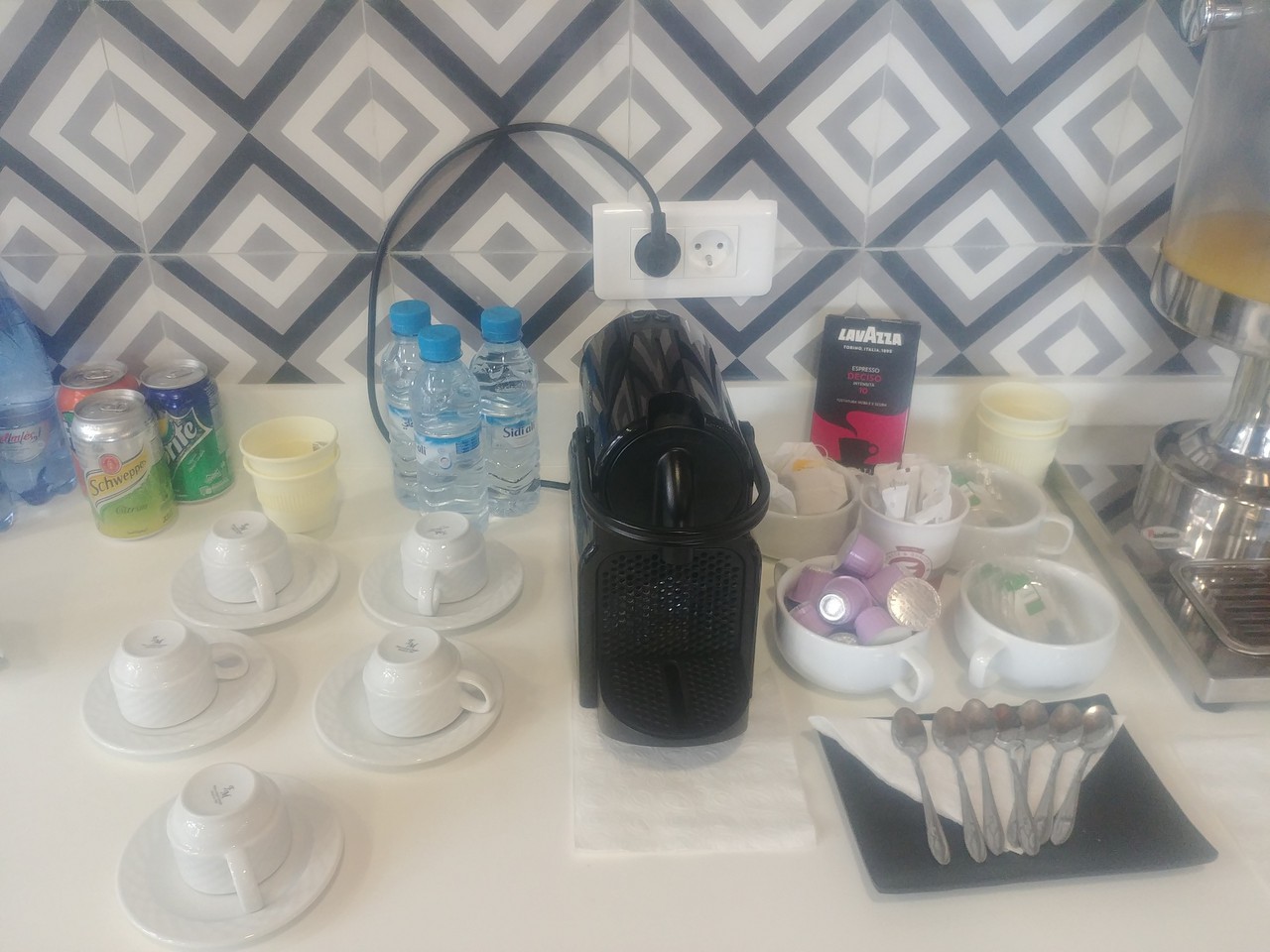 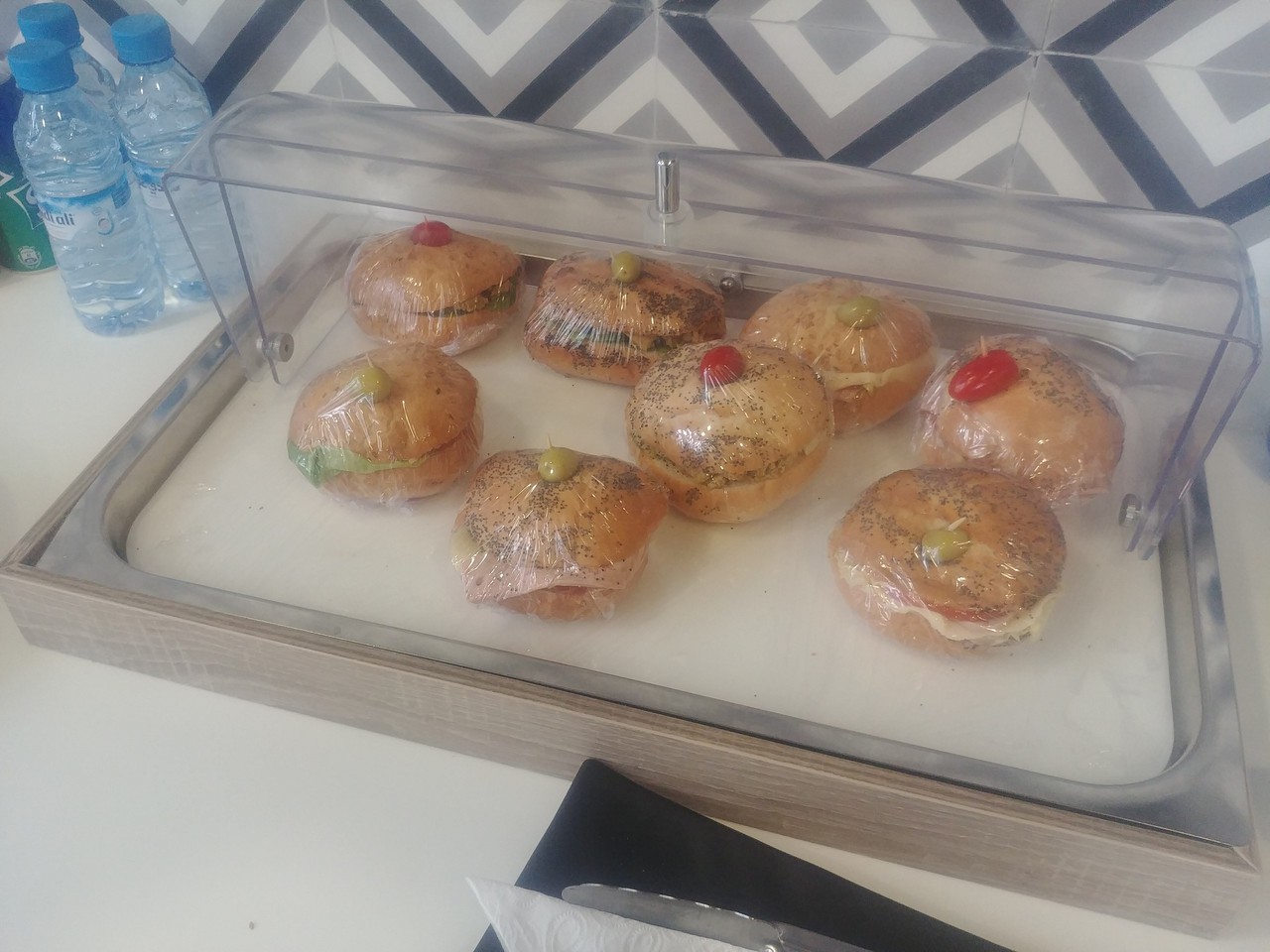 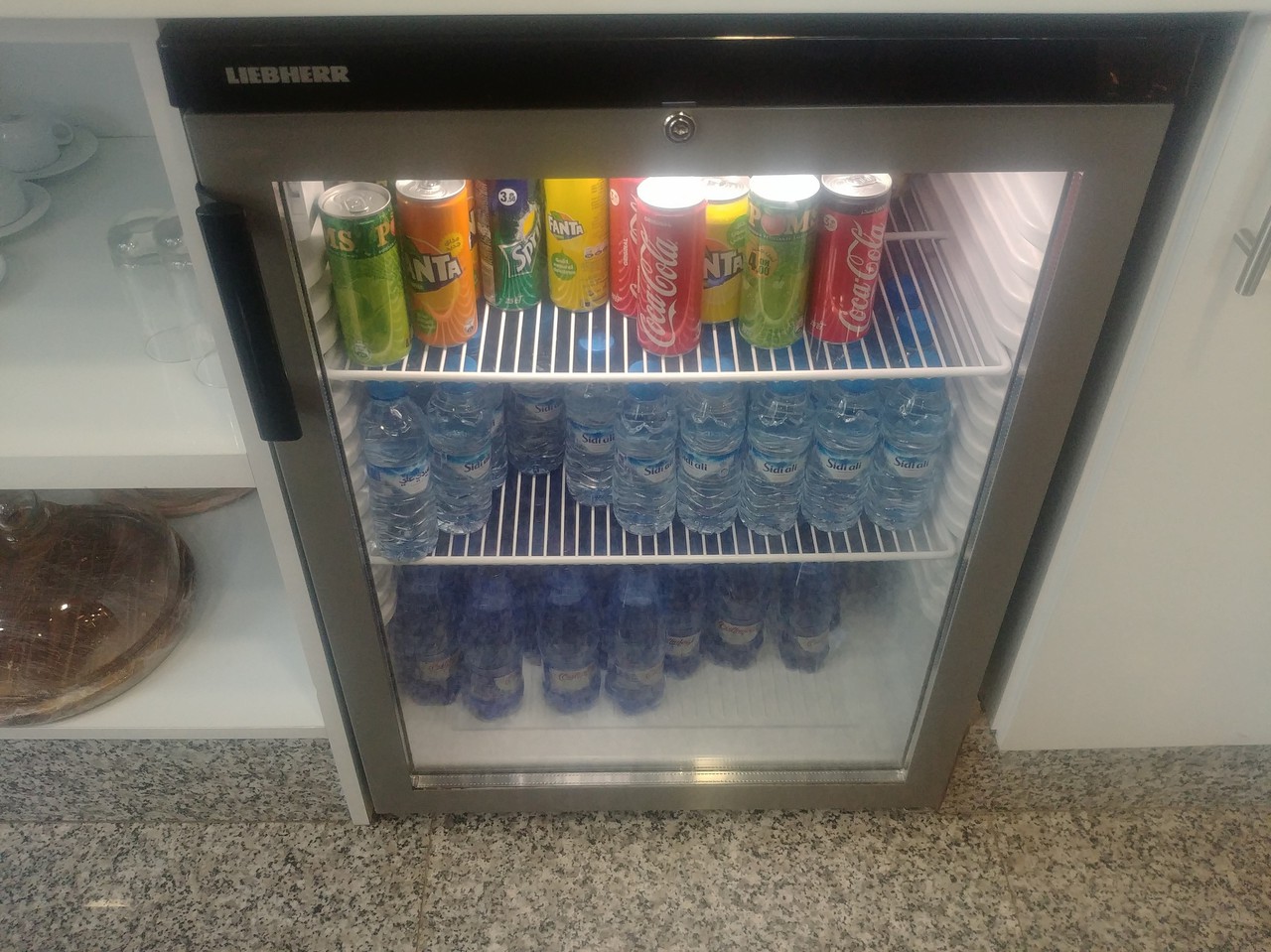 You might have a reduced choice in term of drinking. There is a choice between different cold drinking such as mineral water, sparkling water or soda) but these products are Moroccan, so the recipes are quite different such as Coke which is sweeter, and I cannot find my favourite sparkling water! Also, you can find hot drinking such as coffee or tea, but there is no brand coffee with the machine. Depending on the time, you may find some sandwichs, cakes, pastries, yogurts and fruits.

An internet connection working with Wi-Fi is provided by the lounge. I made some sped tests on my computer, and it is good.

The toilets are clean and really big, I have nothing to add on this point.

For the divertissement point, I note that there is a TV with French TV channels as I watched. Also, there are some newspaper (Moroccan, French or international) such as Le Figaro or The New York Times

There is also a smoker room which the only one in this airport. But there isn’t any alcohol in this lounge unlike the Pearl Lounge in Casablanca airport.

The plane coming from Bordeaux, France, was delayed by 45 minutes because of a passenger peak due to Christmas holidays. That’s why our boarding started 30 minutes later by night, after the passenger disembarkment, and an express cleaning of the cabin.

Our airliner today is an Airbus A320-200 in a 1-class configuration, at this time it is the only airplane operated by Air Arabia which will welcome some A321 soon! To my mind, it is a good cabin because it is more comfortable than others Low-Cost Carrier (LCC) I tried.

The boarding was not well organized, 2 upstairs (one at the front and the other one at the back) because there are any gangways in this airport. Because of some passenger who did not respect boarding instruction given by the Air Arabia’s boarding agents, it was disordered. Then, I board on the plane and the cabin crew welcomed me onboard and show the way to my seat, which was not too long!

After that, I sit down on my seat, the seat 1 ALPHA. I chose this seat because of the extra space for the legs and the proximity from the door. 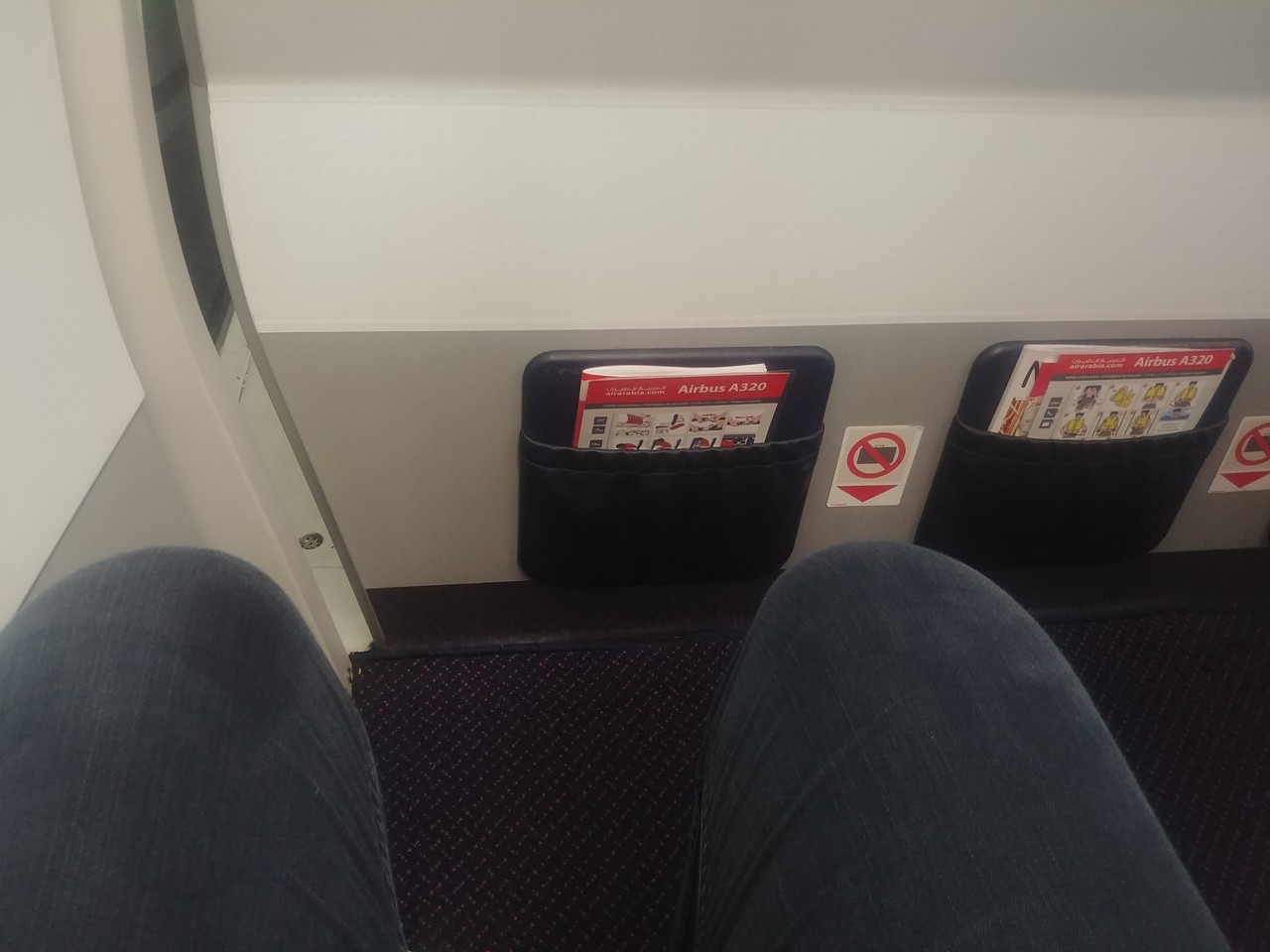 Look at this! It is a huge space in a plane.

According to Air Arabia website there is at least 81 cm / 32 inches between 2 rows. But I could not check this information. 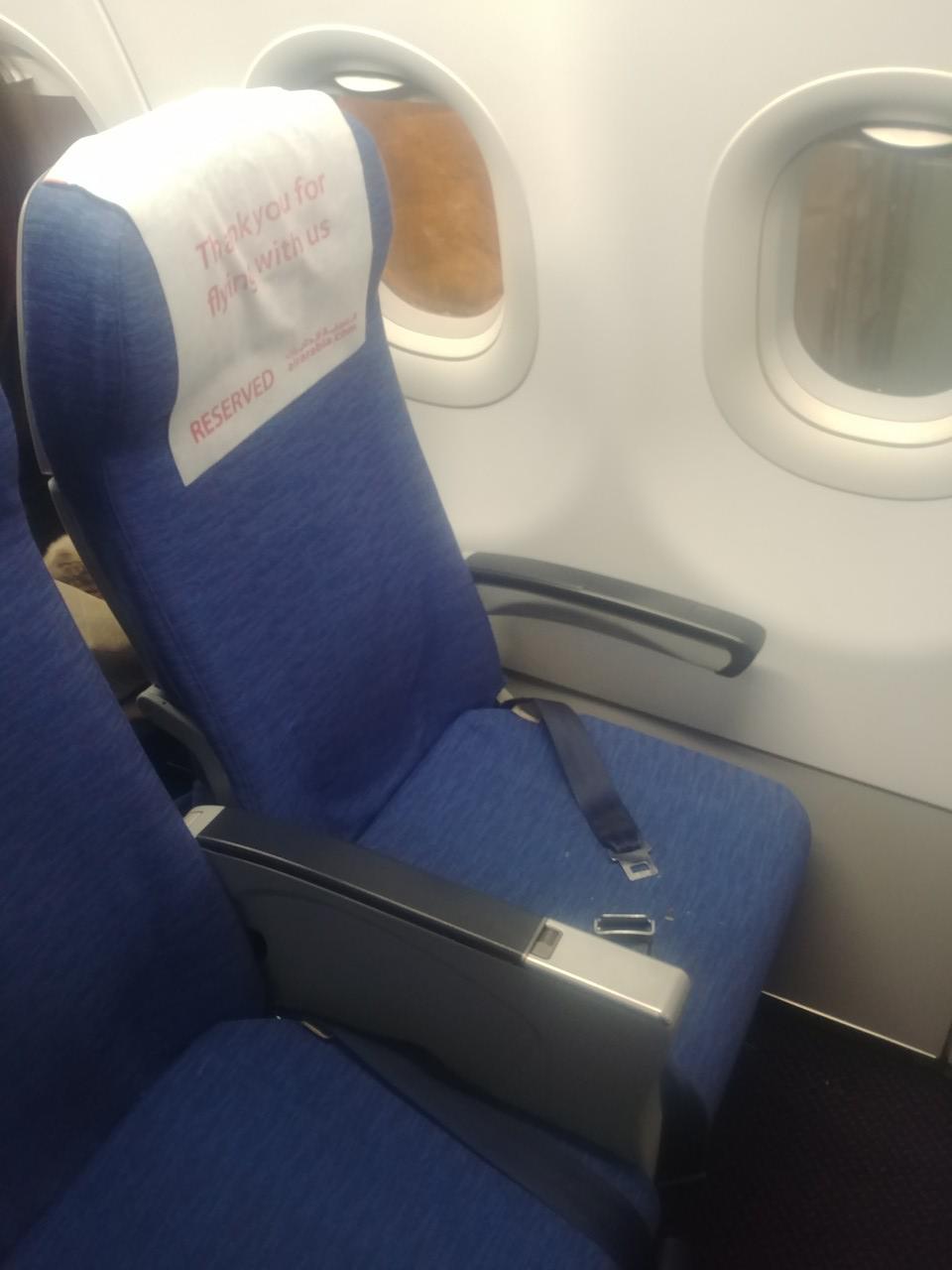 First row seat with tablets hiden in the armrest

It seems that this cabin is one of the oldest of Air Arabia I tested, the seat is a little bit less comfortable than others. Actually, it is good for an LCC and better than others LCC I also tested.

After the safety demonstrations, captain announced that we will fly at a 38,000 ft. cruising level, the weather will be good, and that our flight time today could be 2 hours and 40 minutes. Finally, we took off at 19:35 with a very short take off!

The last time I flew by night was last year, when I flew to London-Stansted, but I cannot remind because I was tired. This time, I could discover Fez’ city by night during the climbing and several Spanish coastal cities. And during the final approach I saw the famous Strasbourg’s cathedral thanks to the lighting set up on this beautiful monument. 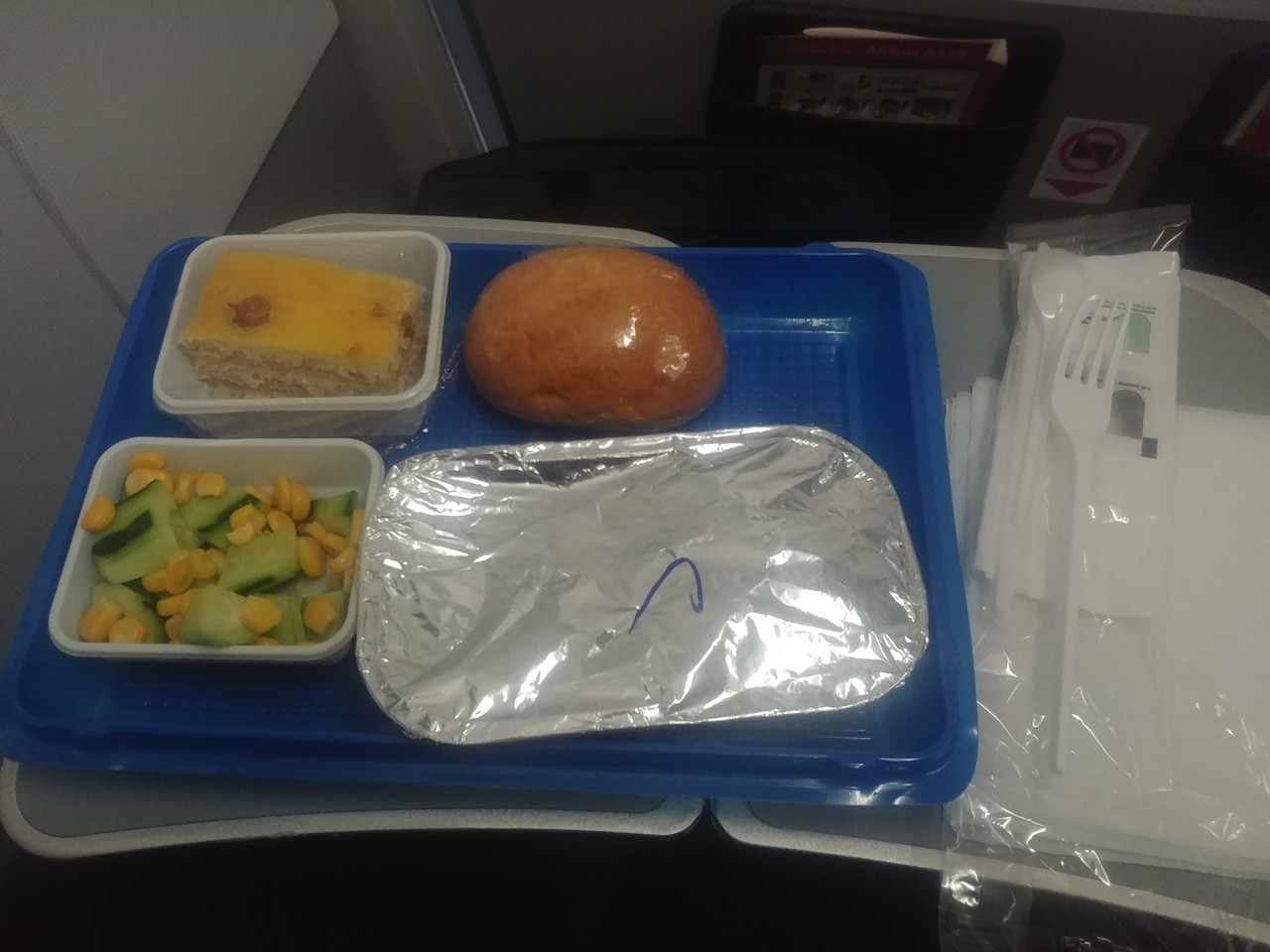 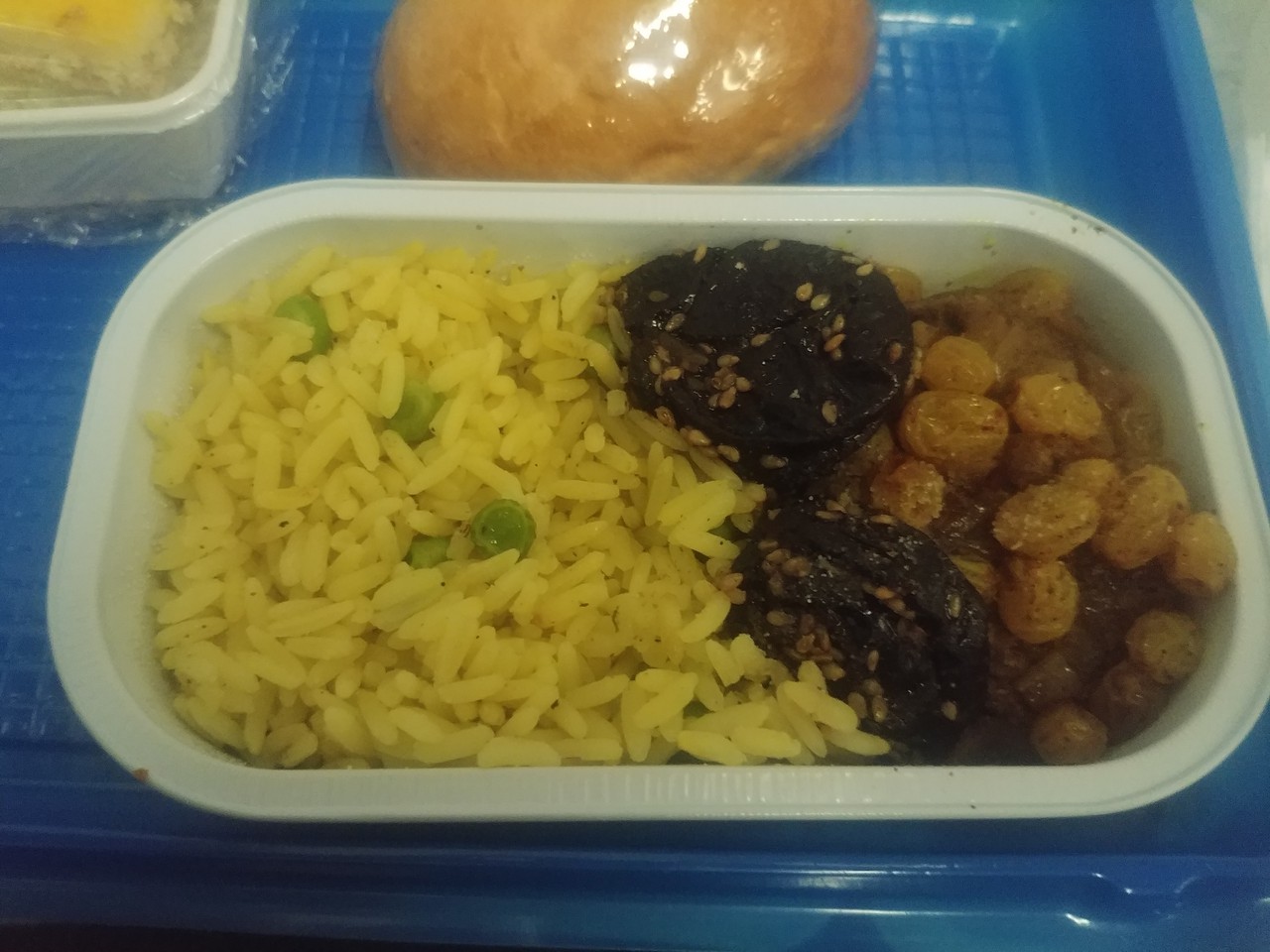 As I said before, a hot meal is included in my fare. I chose during my booking a hotel meal with chicken. Finally, I decided to change onboard to a beef tagine. The meal was hot, it was well-balanced, and the meat was well-cooked. The hot meal was served with a little and fresh salad, and a piece of cake. I appreciate this meal, it was better than I expected for an LCC. The only negative point is that any water was served with this meal.

There were any personal In-Flight Entertainment (IFE) on this flight, but there is a common IFE which broadcast some gags video during the flight. This flight was a little bit longer than others I used to take but I was not bored.

During the approach I felt some turbulences, as I expected, but I did not feel any during the first part of the flight. We finally landed at Strasbourg-Entzheim airport at 22:35, which means that my flight was delayed by 30 minutes at destination. And, as for the take-off, it was a very short landing. The ground crew was efficient, I could step out of the plane some minutes after the landing. Nevertheless, there were only 2 policy officers at the passport control: 1 for European passengers and one for the others. That’s one reason why I did not appreciate this airport.

Thanks you for listening, if you enjoyed my Flight Report you can comment in the section below. Please note that I might add a bonus in the next few days.

Fez-Saïs airport is a good-sized airport even if it is a simple airport. However, it is a fluid and well-organised airport. I appreciate the free Wi-Fi, it is a good point, this service is not provided in all airports. A bad point is that the lounge is limited, even if the staff was helpful and friendly.

I sometimes fly with Air Arabia, and I recommend this company which made the good compromises. For an LCC, the service is very good. I also appreciate the choice of the Airbus A320, I really like it!

The quality / price rate is interesting, especially for the package I chose, if I add all these services on other company it might be more expensive.

Strasbourg-Entzheim was not fluid, and not too big, I missed some services, in particular for my return flight. For example, there isn’t any lounge here.

guilhem is member of Flight-Report since December 2018.

He wrote 77 reviews about 12 airlines and 26 airports.