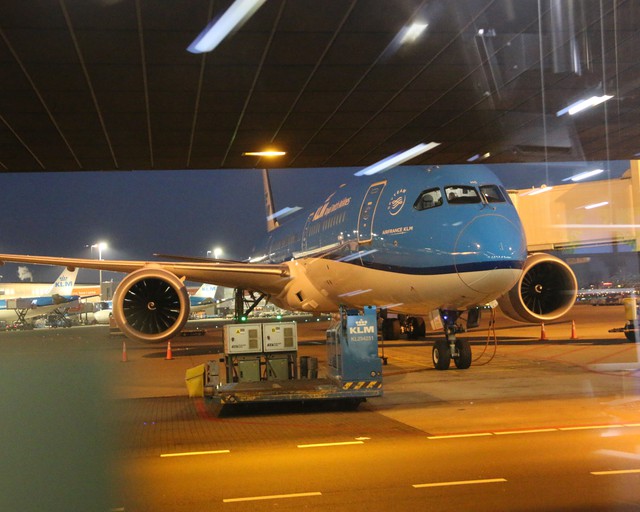 #32 out of 78 Airlines A minimum of 10 flight-reports within the past two years is required to appear in the rankings. 962 reviews 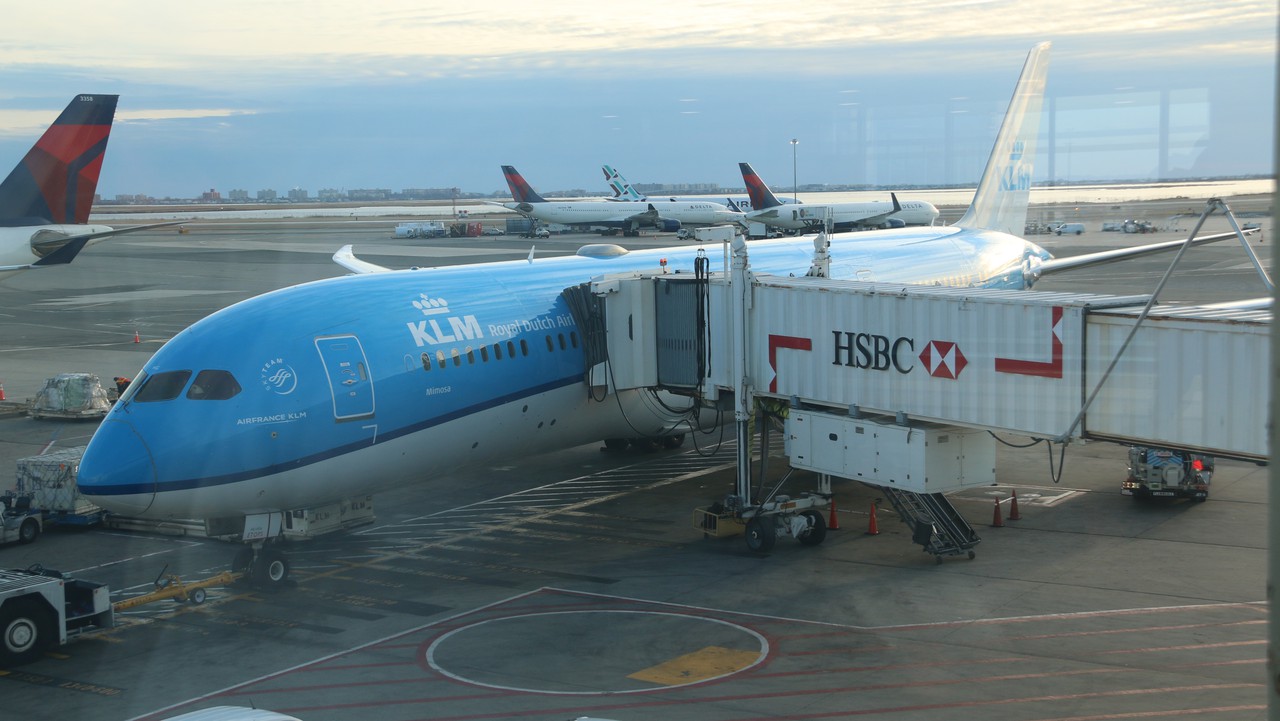 My flight home from Sint Maarten was via a short stop in Miami and New York. So my flight back was on the brand new aircraft in KLM's wide body fleet, the Boeing 787-9 Dreamliner. The Boeing Dreamliner fleet began to arrive as the final McDonnell-Douglas MD-11 were phased out in autumn of 2014. The next new aircraft fleet is the Airbus A350 due in 2020. The Dreamliner was the first fleet type in the KLM fleet to be delivered in the new "Dolphin" style colour scheme, the A330s & E-190 being the last in the outgoing 2003-2014 livery.

I got to JFK from the Yankee Stadium, it was my 22nd birthday and I wanted to visit the Yankee Stadium Hard Rock Cafe, which I hadn't visited at the time. The last couple of years I've been in different cities for my birthday since (Gibraltar, Stockholm, Amsterdam, Reykjavik, London & now NYC). 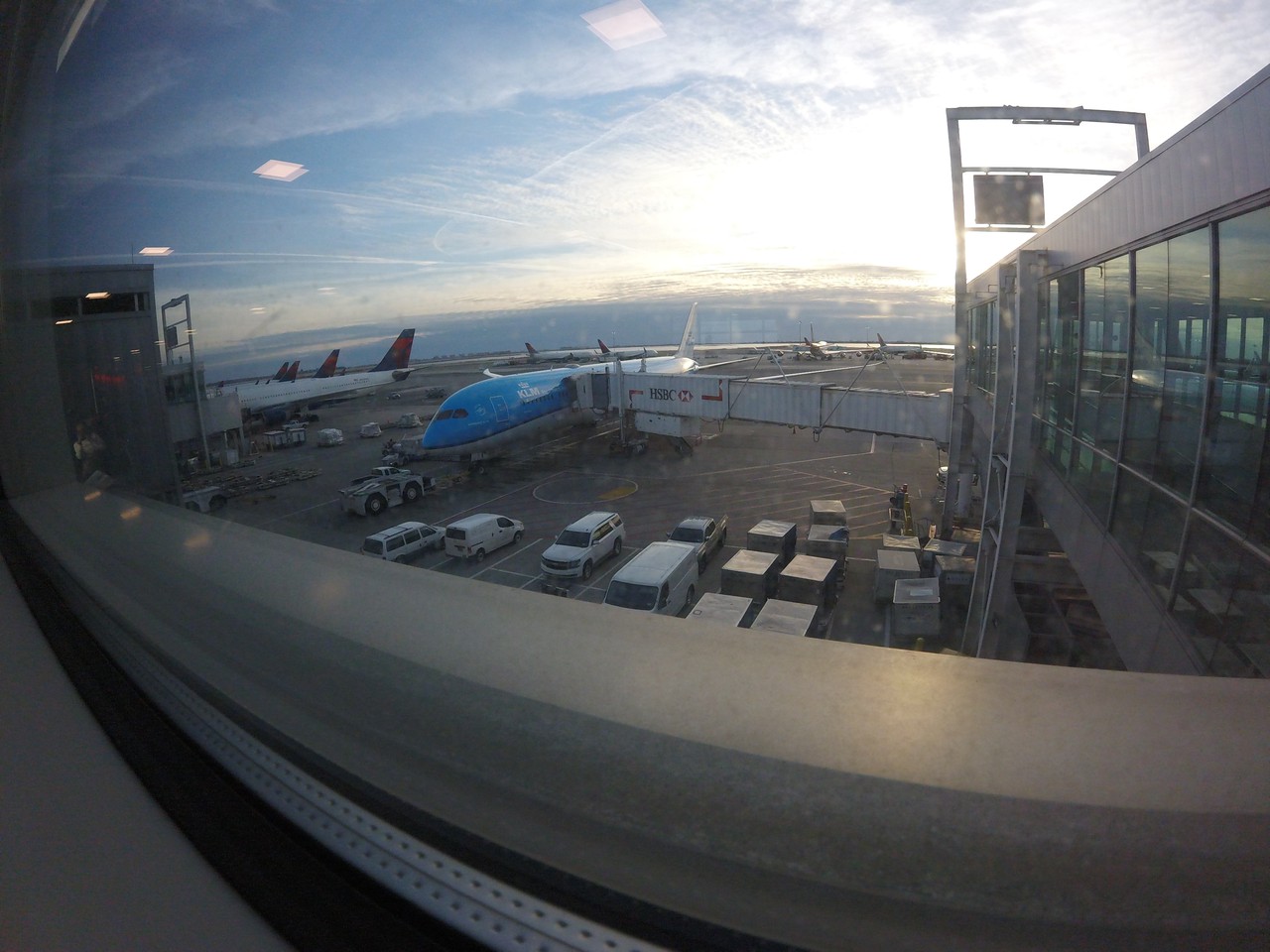 My shiny blue "Flying Dutchman" Boeing 787-9 was going to be PH-BHG for this evening. It is one of the "Middle Aged" Dreamliners of the 13 in the fleet at the time of flying, delivered in late June 2016. 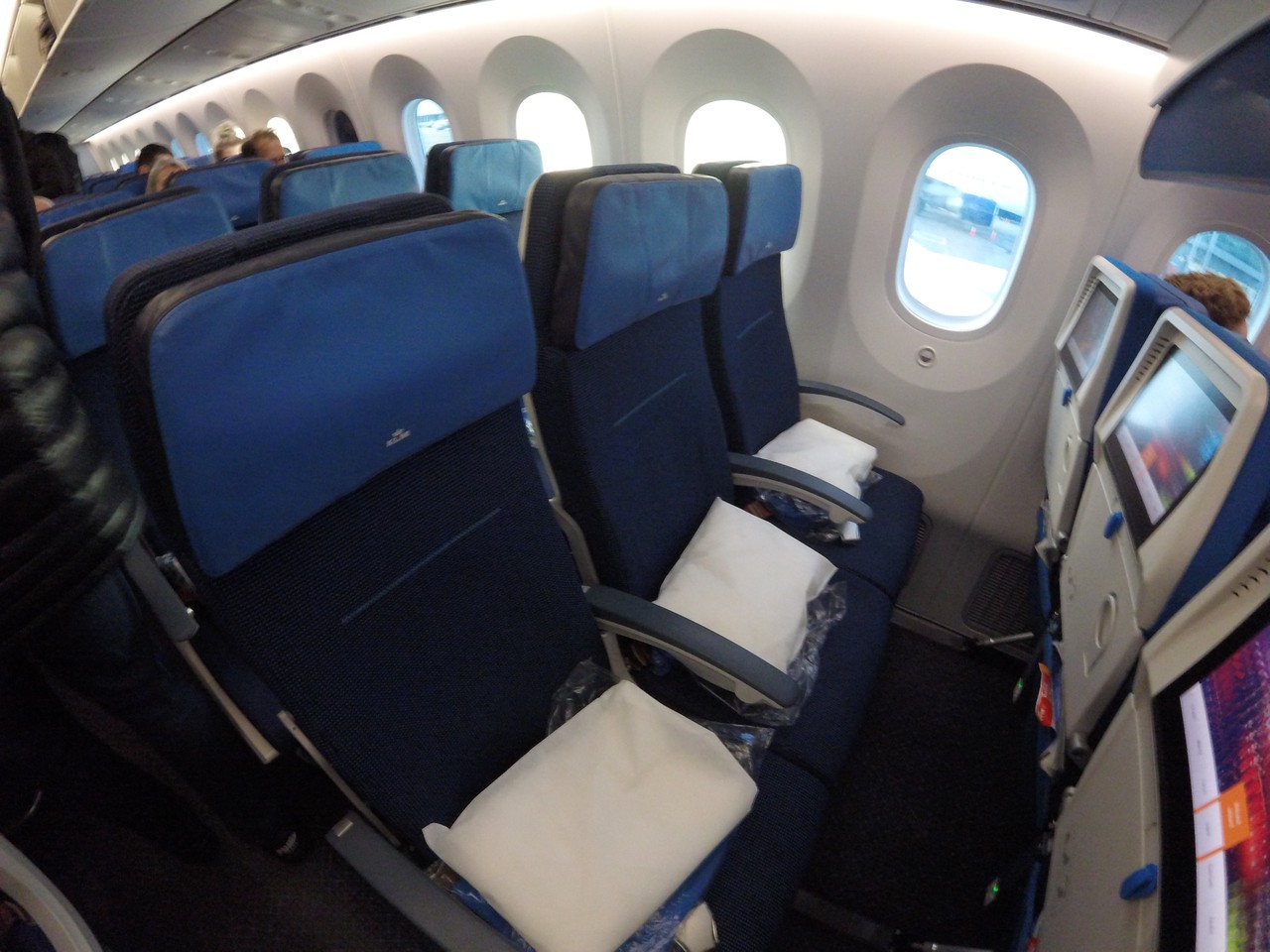 The Boeing 787-9 has seats that are of the "Slimline" design being used in post-2010 aircraft and short-haul airlines. They all have individual screens for IFE and they also have two charging ports on the seats. One for a plug, the other for a USB port.

The vast wing with its flexible wingtip makes adds to the Dreamliner's ultra-modern fuel efficiency in an age where reducing an airlines fuel costs and decreasing their CO2 emissions is of an up most importance! 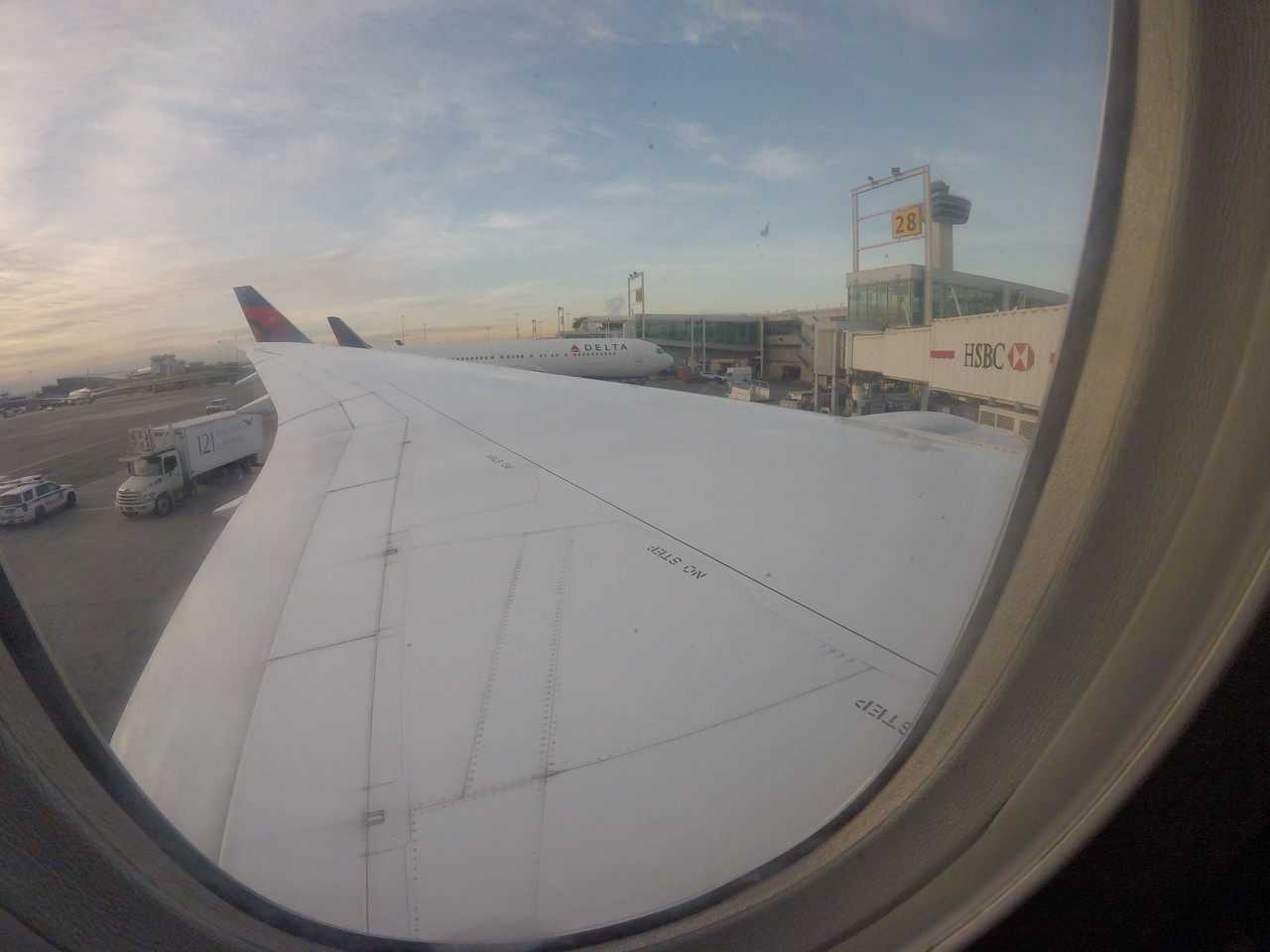 The flight left after darkness had fallen (which is predictable during an evening winter departure) and the Dreamliner climbed out over a lit up New York City. I can't wait to go back again- I like stopping in NYC during my USA Trips.

There wasn't much to photograph so most of the flight I was enjoying the range of tv shows/musical entertainment on the system, watching the interactive map as we sailed through the sky, and I went to socialise with the cabin crew so I could get my legs moving during the long flight. I am not much of a sleeper on planes- I enjoy the flights too much! 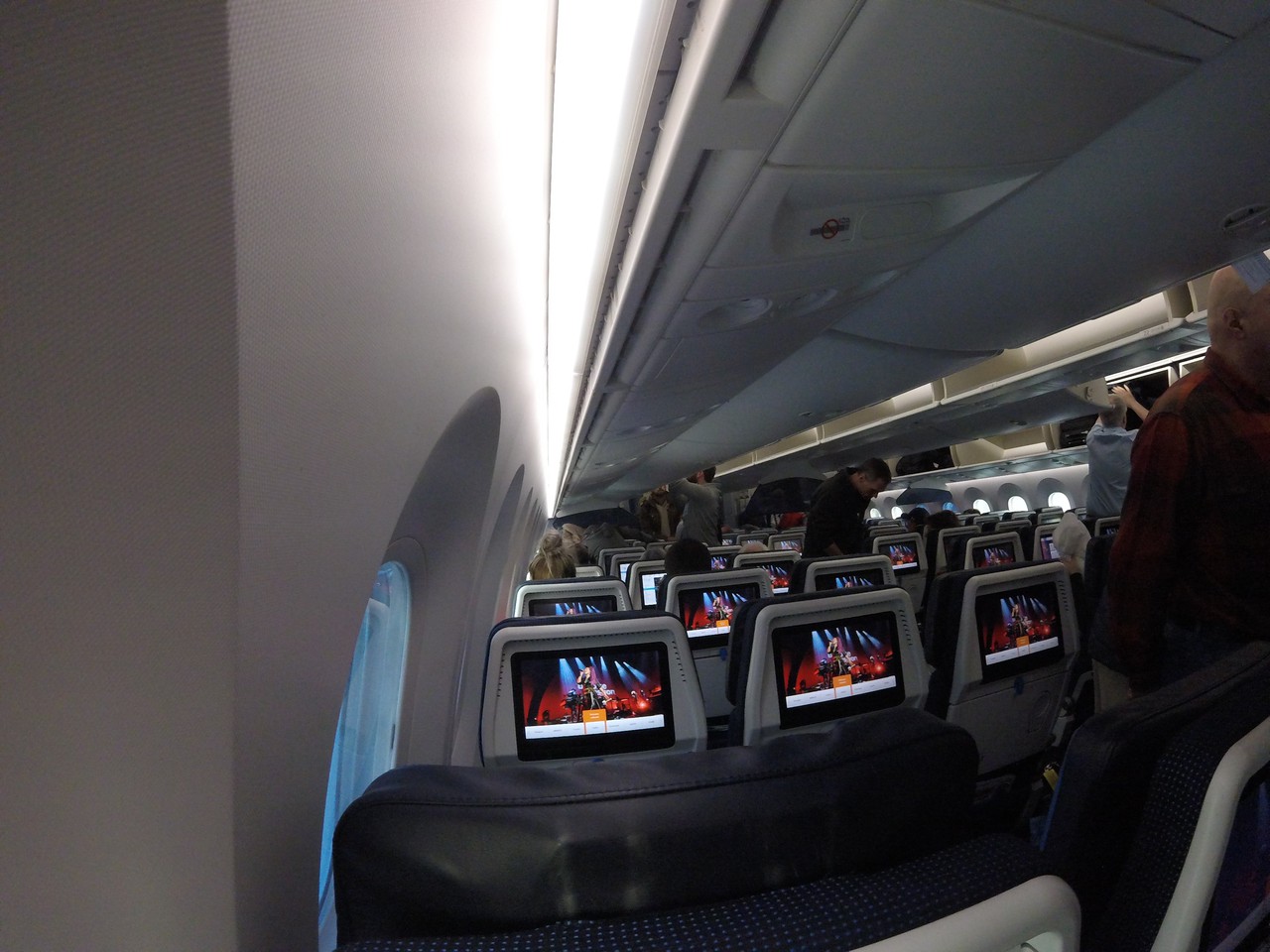 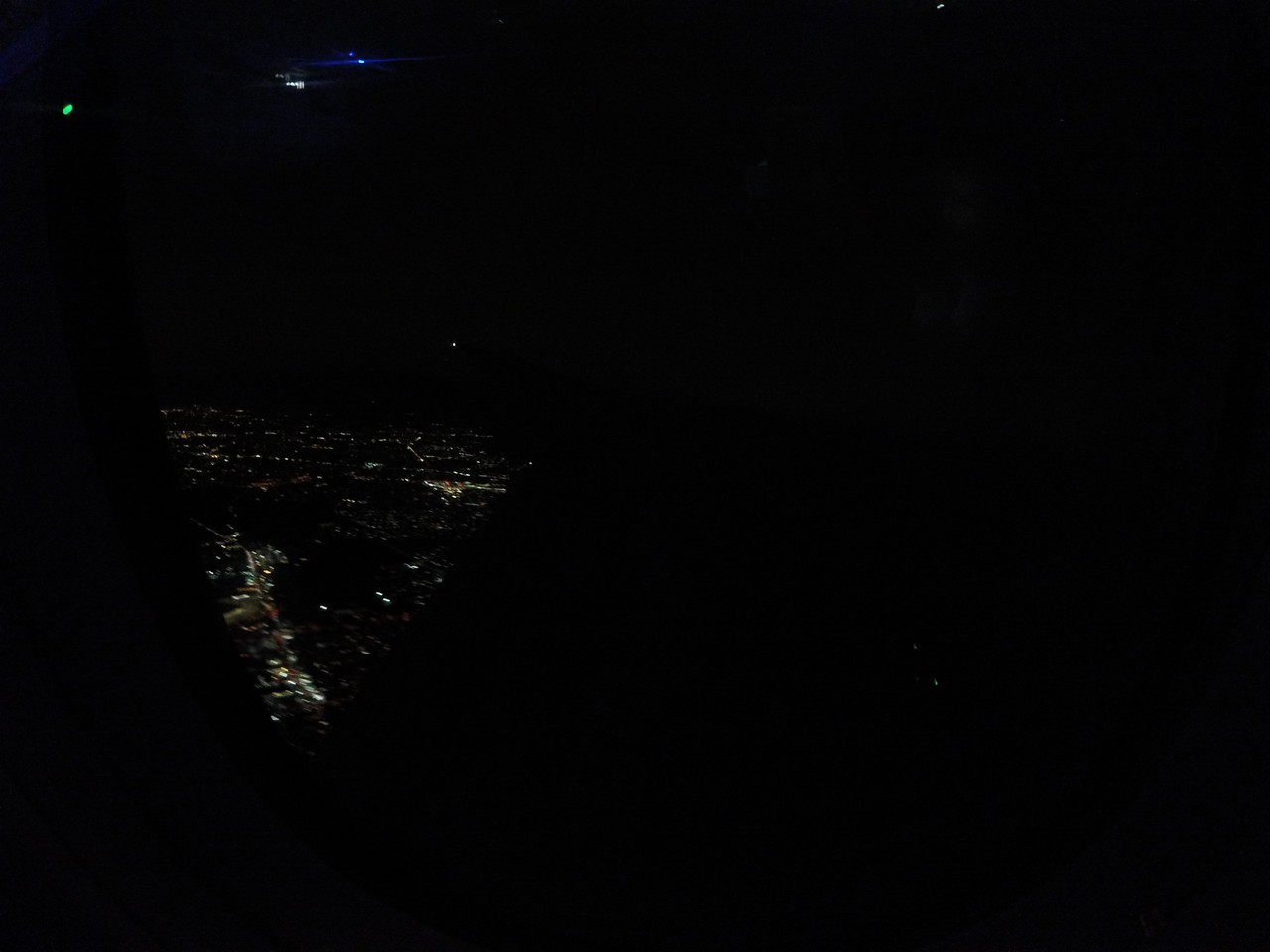 I had the meatballs on the flight out, so I decided to enjoy the vegetarian tomato pasta dish on this return flight as it was available. The main course was served on a tray alongside: chocolate cake, bean salad, Dutch cheese and crackers with a cup of cola. 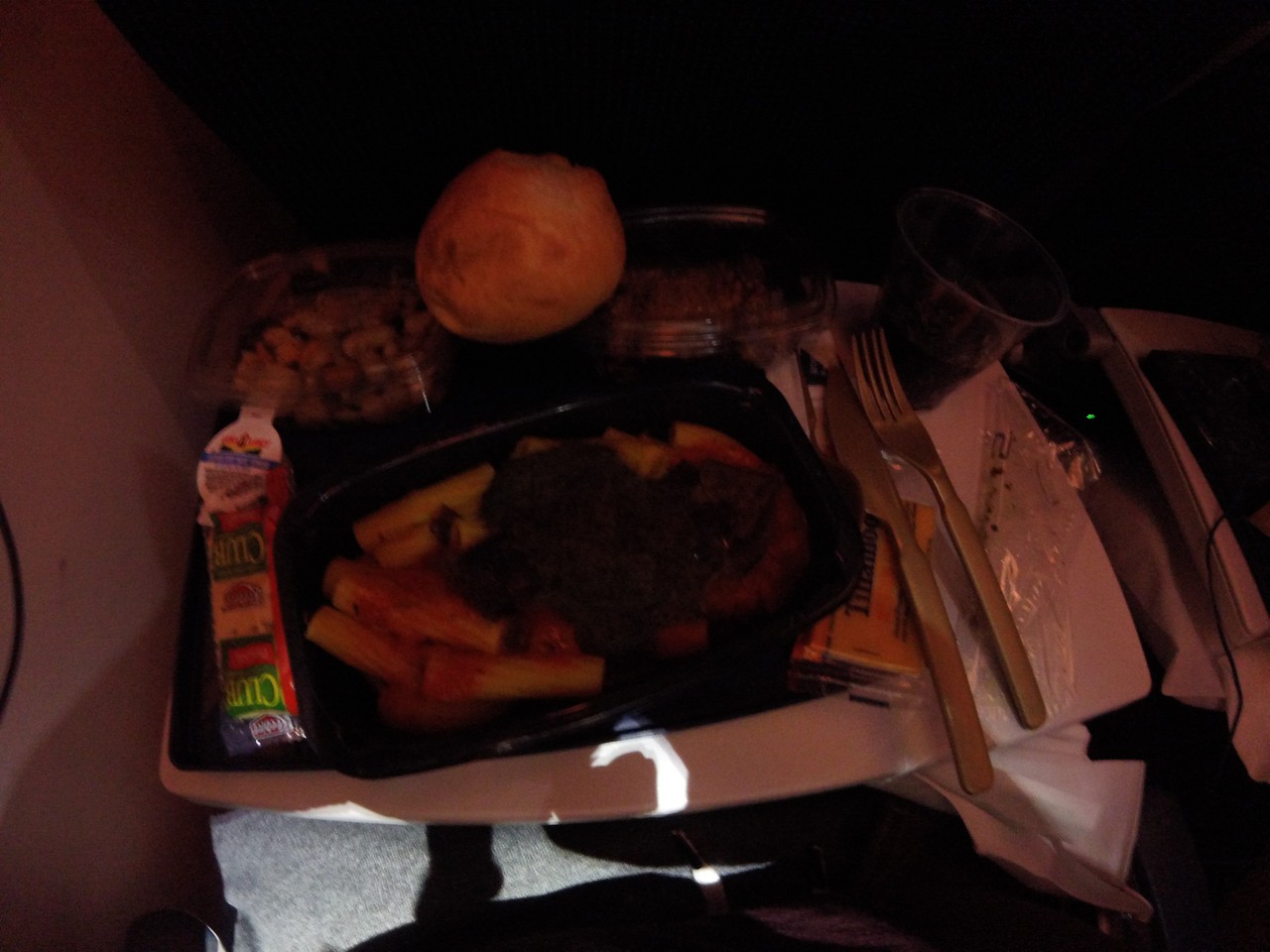 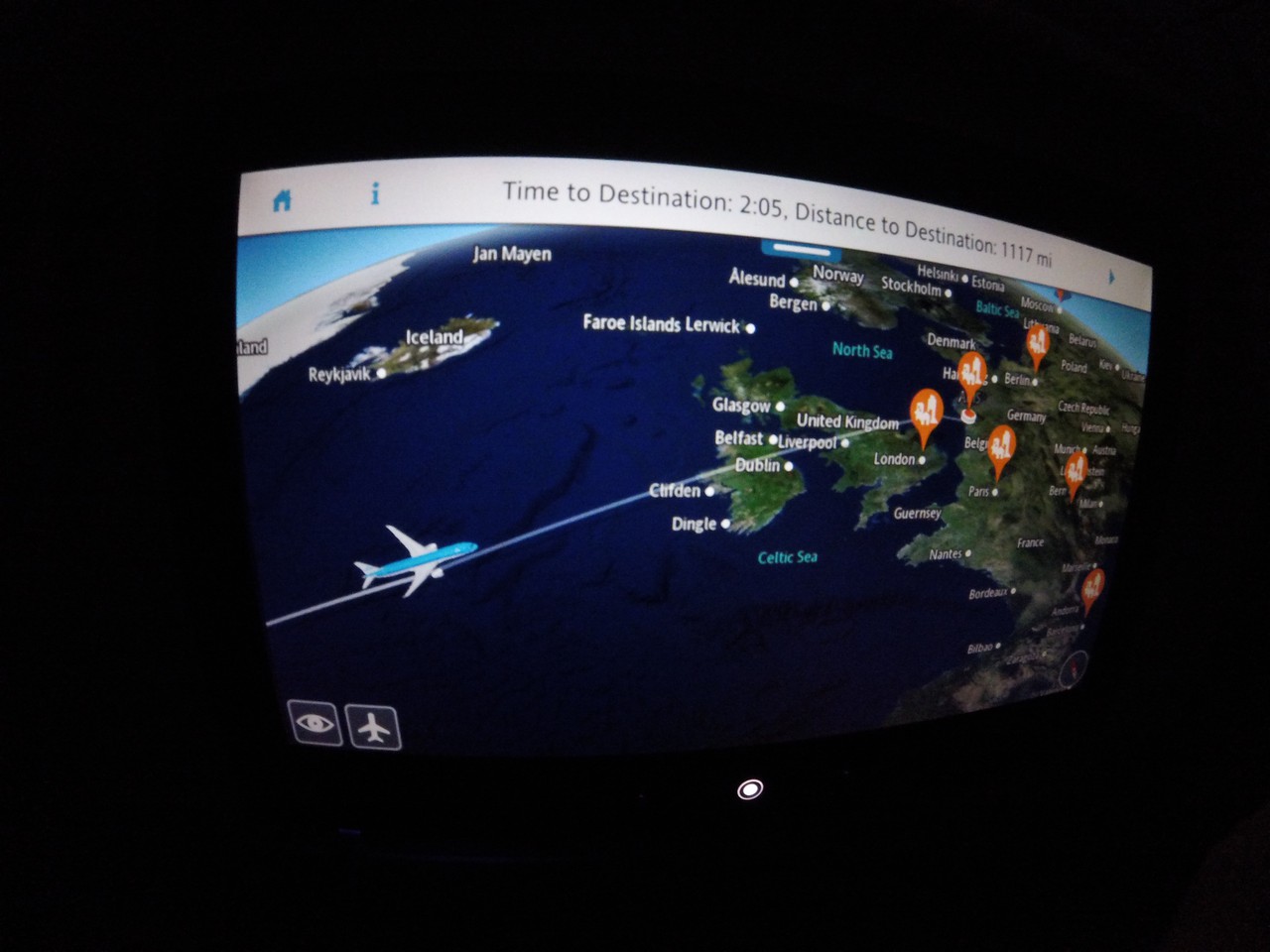 As we came up on Jolly ole Blighty, the breakfast snack box was dished out to everyone. This included a sandwich with Dutch Gouda cheese, a fruity strawberry yogurt, a tub of water which I then included with a Tea and Orange Juice. 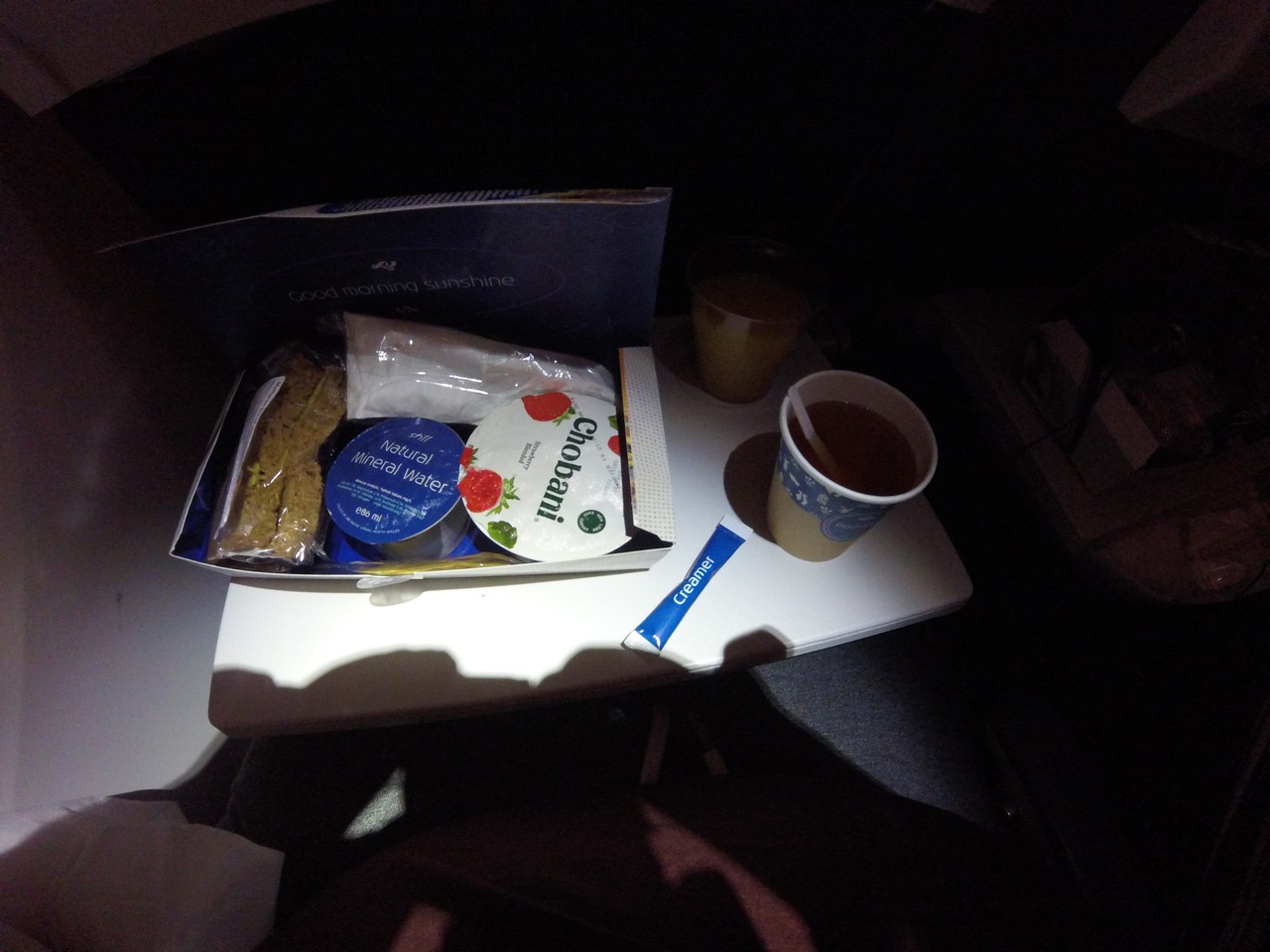 As was to be expected, we arrived a good 20 minutes early, there really isn't much reason to go in a hold at AMS at 6am, even though its one of the Four "Mega-Hubs" in Europe (alongside LHR, FRA and CDG).
Parking up, I made my way out via a quick visit to the flight deck and to have a quick talk to the pilots about the new bird. I love the Dreamliner flight deck, it is quite spacious compare to the 737-NG and classic favourite Boeing 757/767.
The return to the grey cockpit layout from the previous brown colour is akin to the Boeing 707 and Boeing 747-Classics from the 1960s/70s, albeit with the LED Glass screens replacing the myriad of dials and switches. 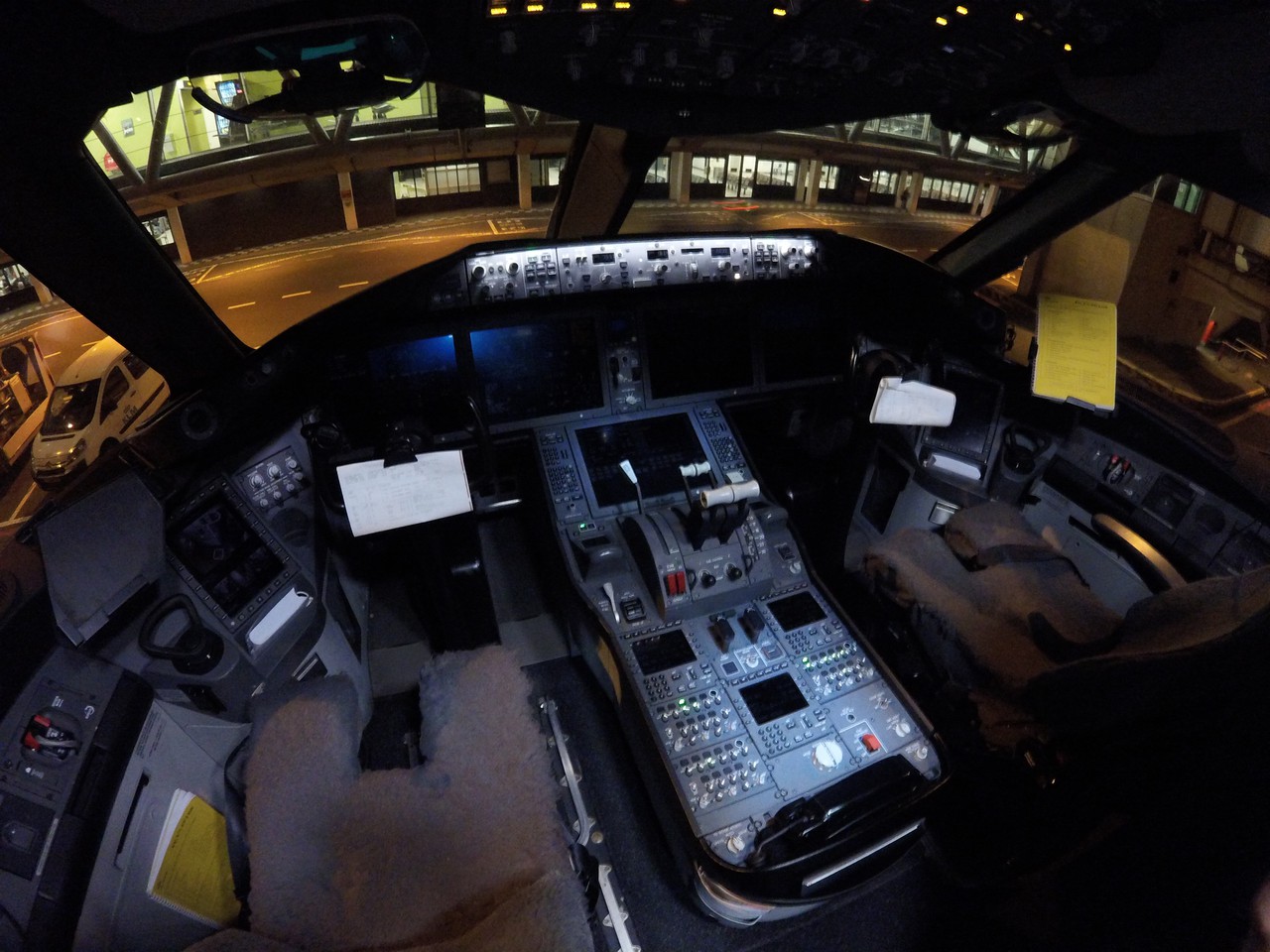 Two hours later, I was boarding onto an E-190 at AMS to take me back to London (City Airport) concluding my exotic Birthday trip, No real report to make, so here is a selection of pictures from the short uneventful hop across the North Sea. 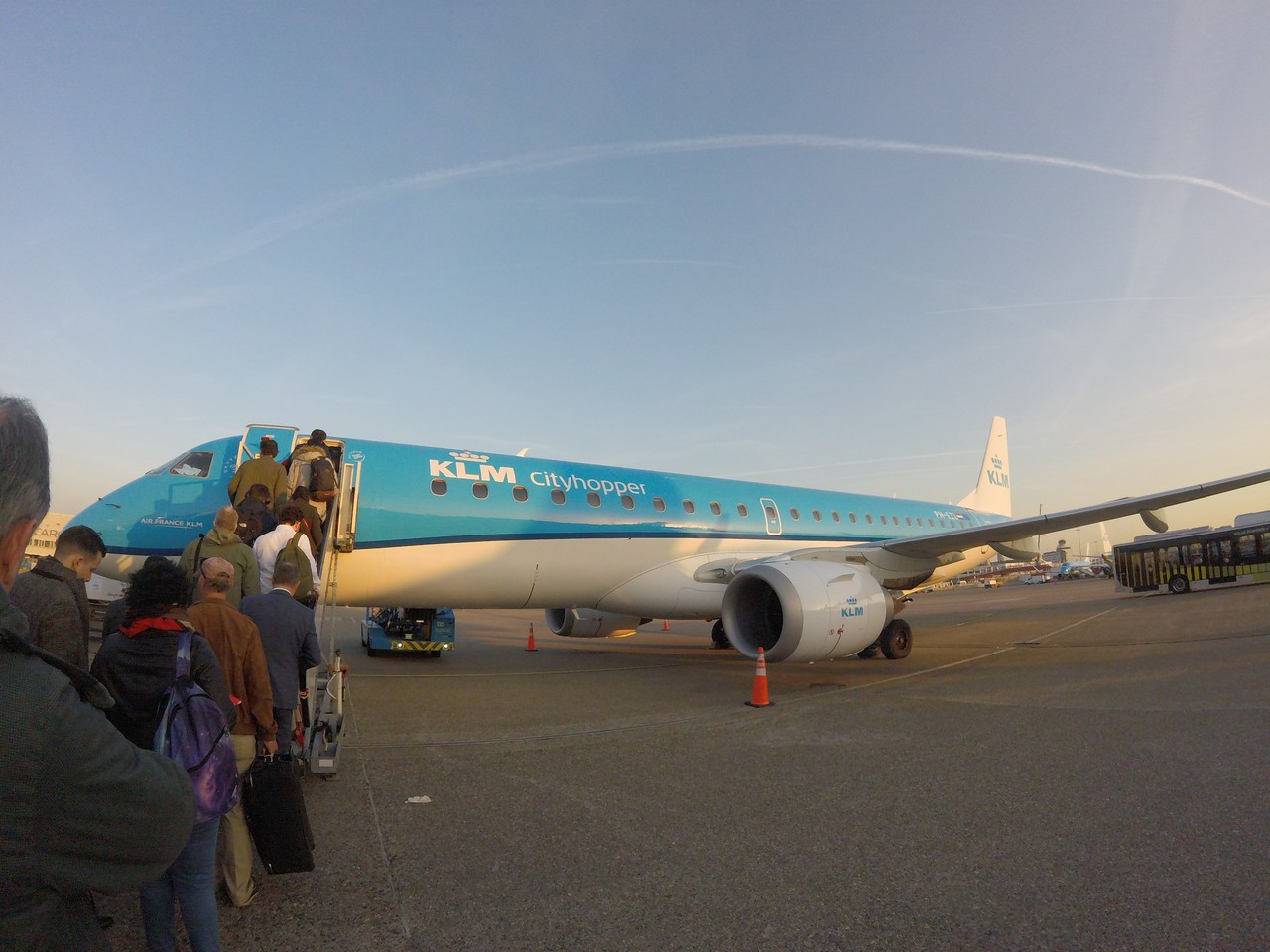 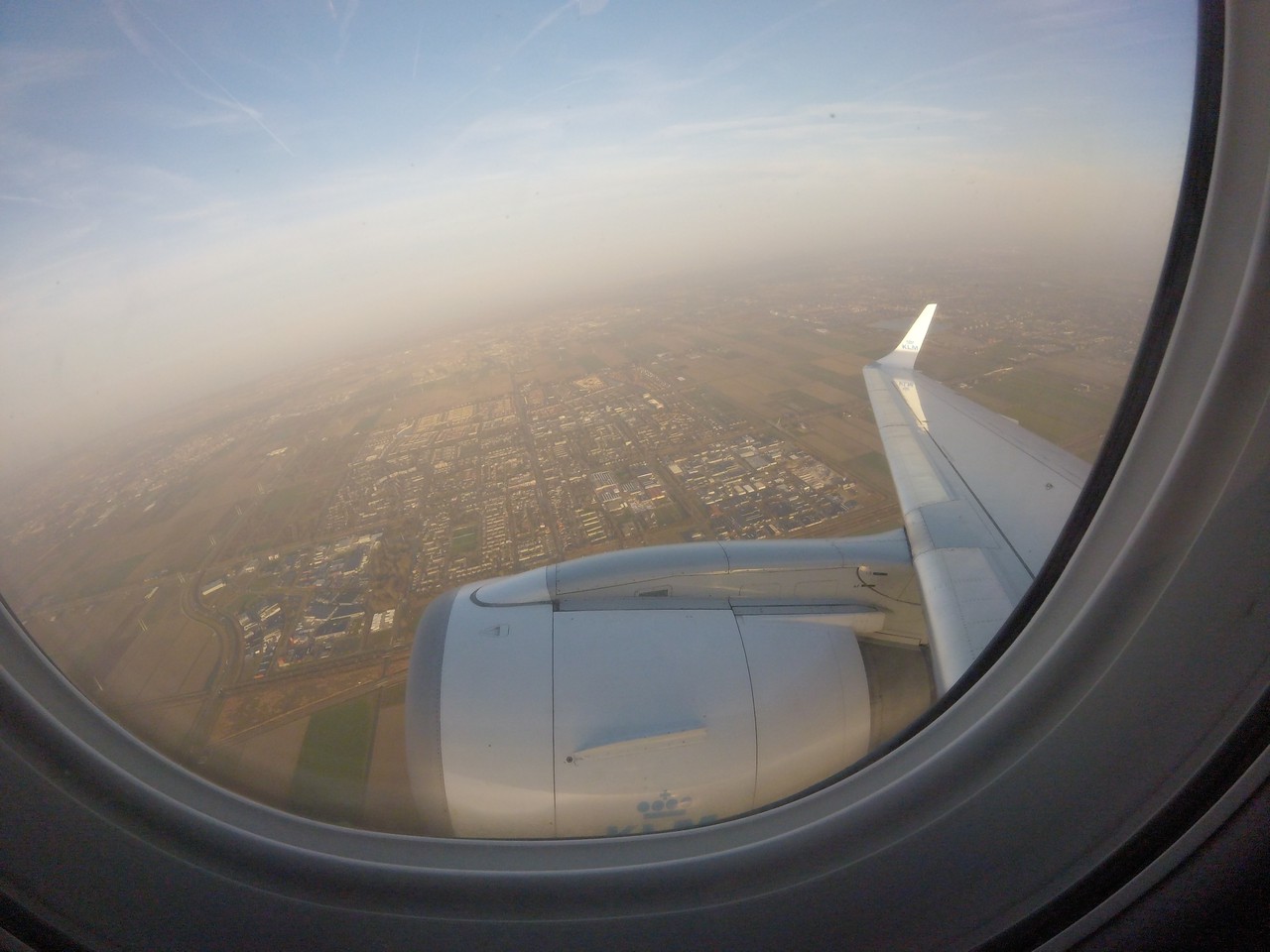 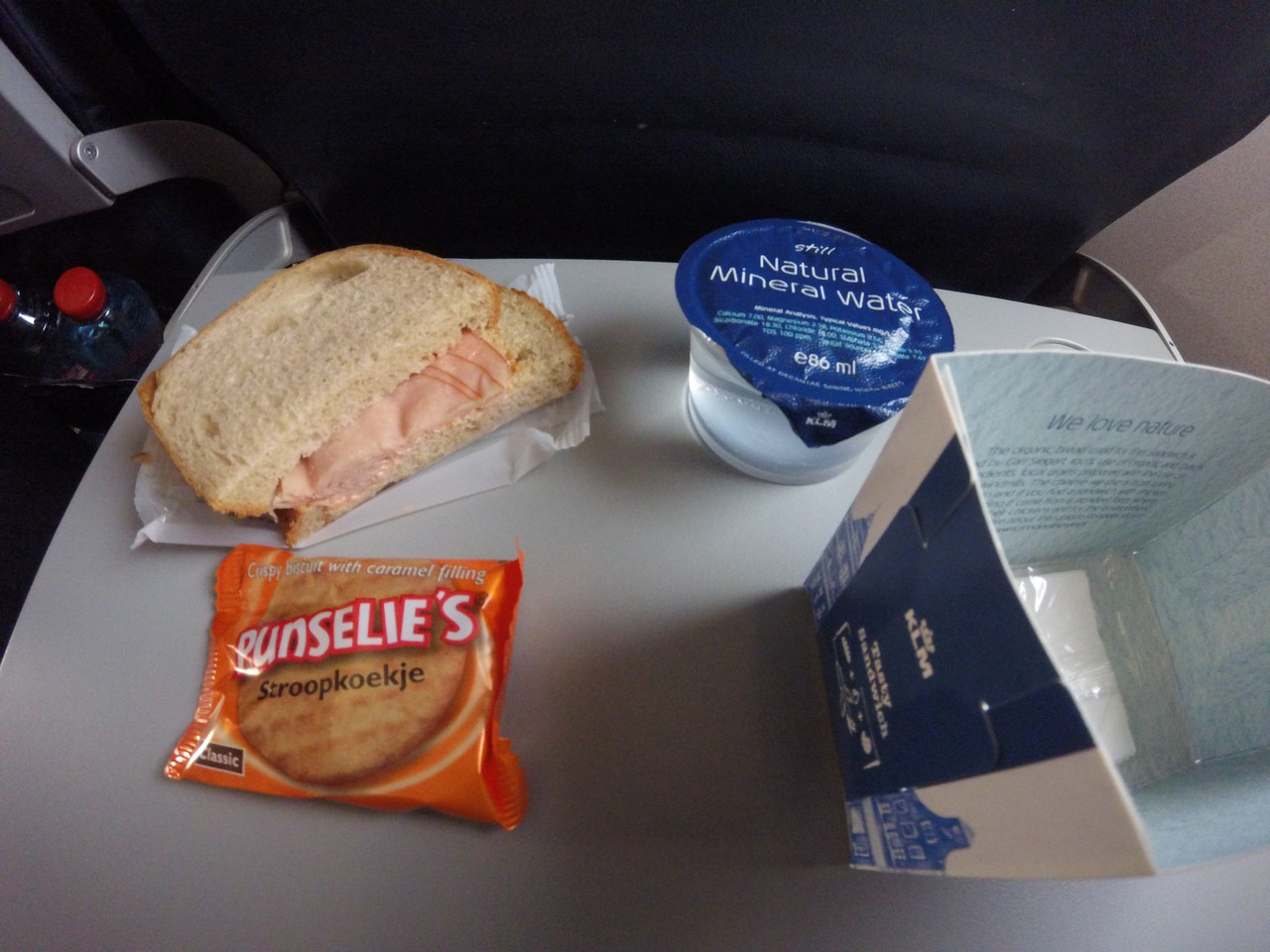 My KL983 flight from AMS to LCY was operated by PH-EZL. Legroom was brilliant as is to be expected on the E-Jet range and a small breakfast box was handed out quickly by the crew with a hot drink. 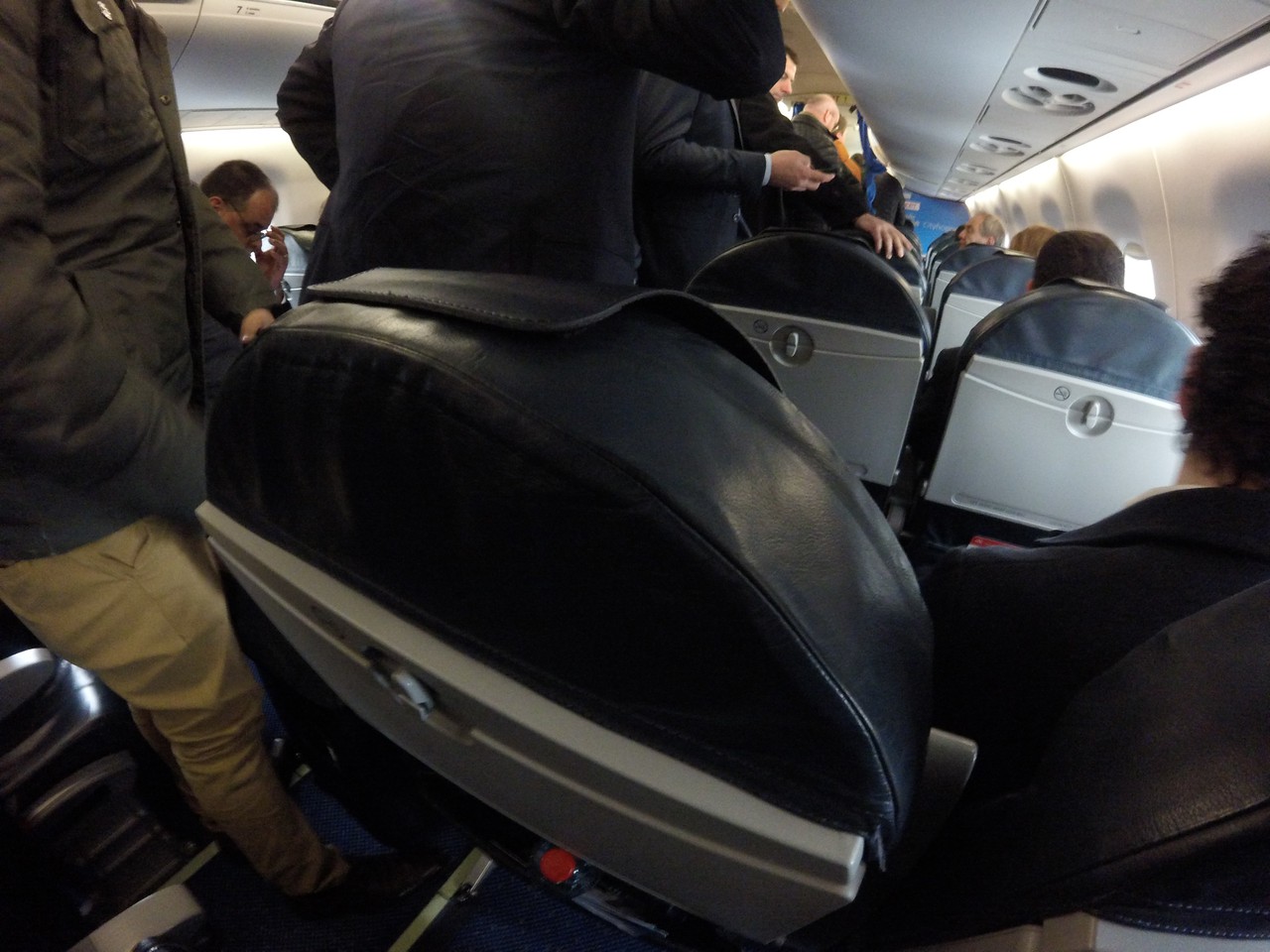 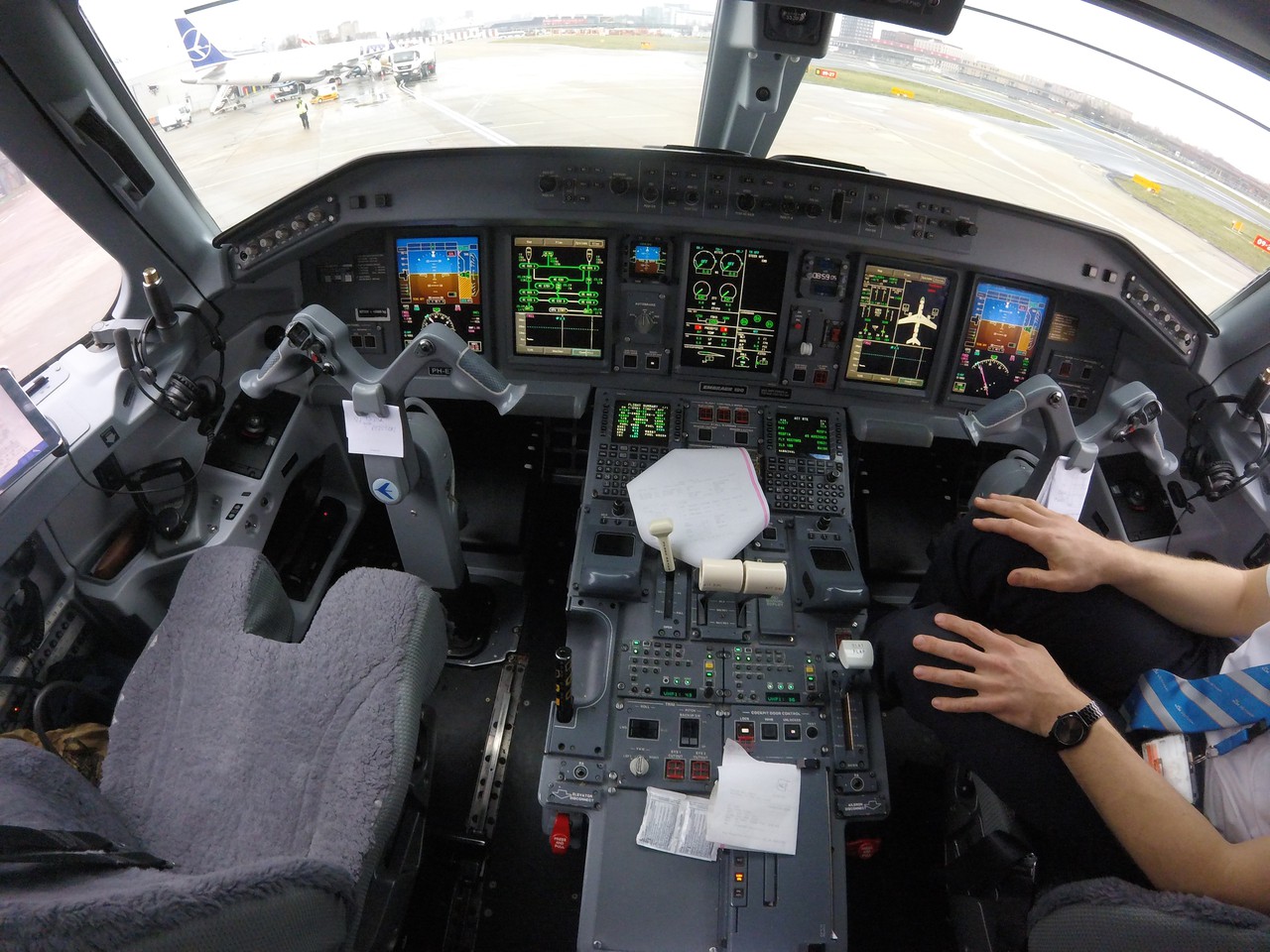 KLM Dreamliner- Nice solid product, very the same results as my AMS-SXM & AMS-LAX experiences. The Dreamliner is a nice comfortable plane with a nice decent cabin. The E-jet also had a good cabin for comfort and provided a decent snack service which is something I enjoyed despite the short hop.

JFK- Bit of a wait at the security, but that is to be expected, easy to connect to with the Metro system via Jamaica or Howard Beach. Nice modern airport, but always be careful taking pictures as JFK Staff are a bit moody on spotters.

AMS- Great airport and offers easy connections between flights, if you are here on a long layover in the daylight- there are plenty of facilities to keep you amused.