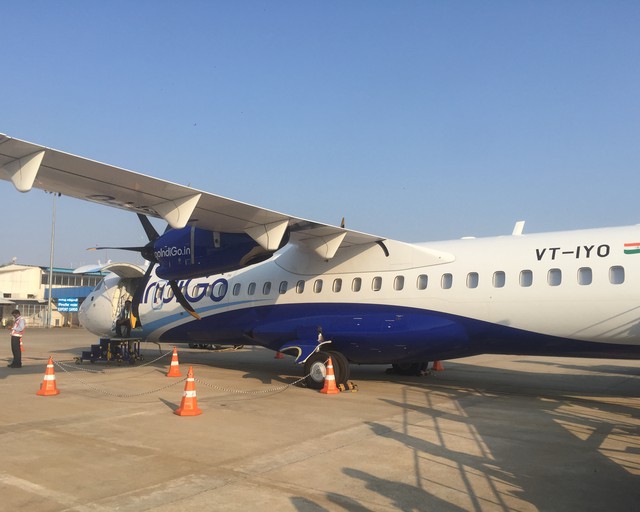 Hello and a warm welcome to Trip Report 29!

Upon completing our visit to the Nagore Shrine (Nagore Dharga) situated approximately 150 Km East of Tiruchirappali, it was time to head back to Tiruchirappalli International Airport to fly on India's Largest Carrier: IndiGo onward to Bangalore.

The cheapest mode of transport to Trichy Airport from Trichy Central was Uber Auto which was priced at INR 100, easily suitable for pax. and two pieces of luggage. However since we had 3 pieces of luggage and 3 pax. travelling to the airport, our hotel arranged us transport to the airport at INR 200 managing to load everything into one Tuk Tuk. Cramped up, but then again Impressive!

IndiGo impressed me from the very beginning which is why I chose them over Air India. 6E was the only airline operating scheduled flights between TRZ and BLR on their ATR 72-600, a turboprop that I hadn't flown to date.

With IndiGo being the cheapest, fastest and best option available, I decided to give them a go. The Website offered promotional seats which meant that I could get a pre-booked seat at no cost. This was a much welcomed offer in-terms of IndiGo being an LCC inclusive of a complimentary 15Kg + 7Kg baggage allowance

The National Carrier, Air India on the other hand would take us to Chennai on their ATR 72-600 and their Airbus A319 from MAA to BLR. This was the more expensive option but also the most attractive option in my case. However, AI did have a problem in terms of seat selection that couldn't be done online and I was definitely not going to be seated in the rear cabin of an ATR or an A319!

Security was quick and we entered the Departure Terminal at TRZ.
IndiGo's ground staff were exceptional! Each and every passenger outbound on a  6E flight were greeted by a representative by the Check-in Kiosks prior to baggage scanning and were assisted to check-in in via the Kiosks in place at the airport which resulted in smaller ques at the check-in counter, and leading up to an overall a faster and efficient process.

Since we were not able to check-in online for some reason, probably a technical issue or so, the ground staff immediately checked us in via the kiosk, prior to verification from IndiGo's ticketing counter.
Baggage drop off at the check-in counter was a matter of minutes and we proceeded to the air-side.

Our gate was located at the basement level. IndiGo's passengers to Chennai as well as passengers to Bangalore were directed to the same waiting area, which became quite crowded due to the insufficient seats available.

Boarding for Chennai was announced first, followed by our flight being called for boarding shortly afterwards to IndiGo's ATR 72-600 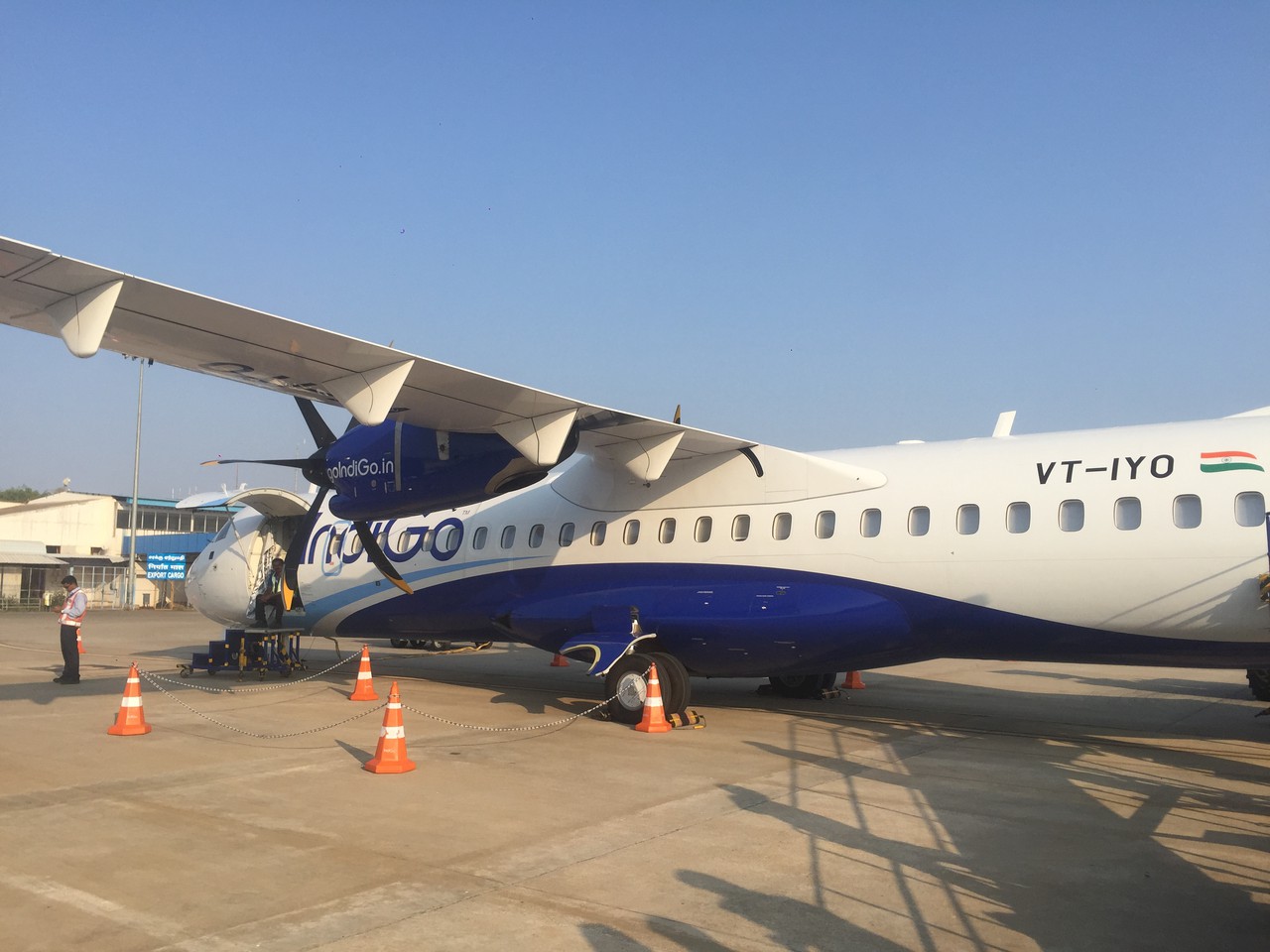 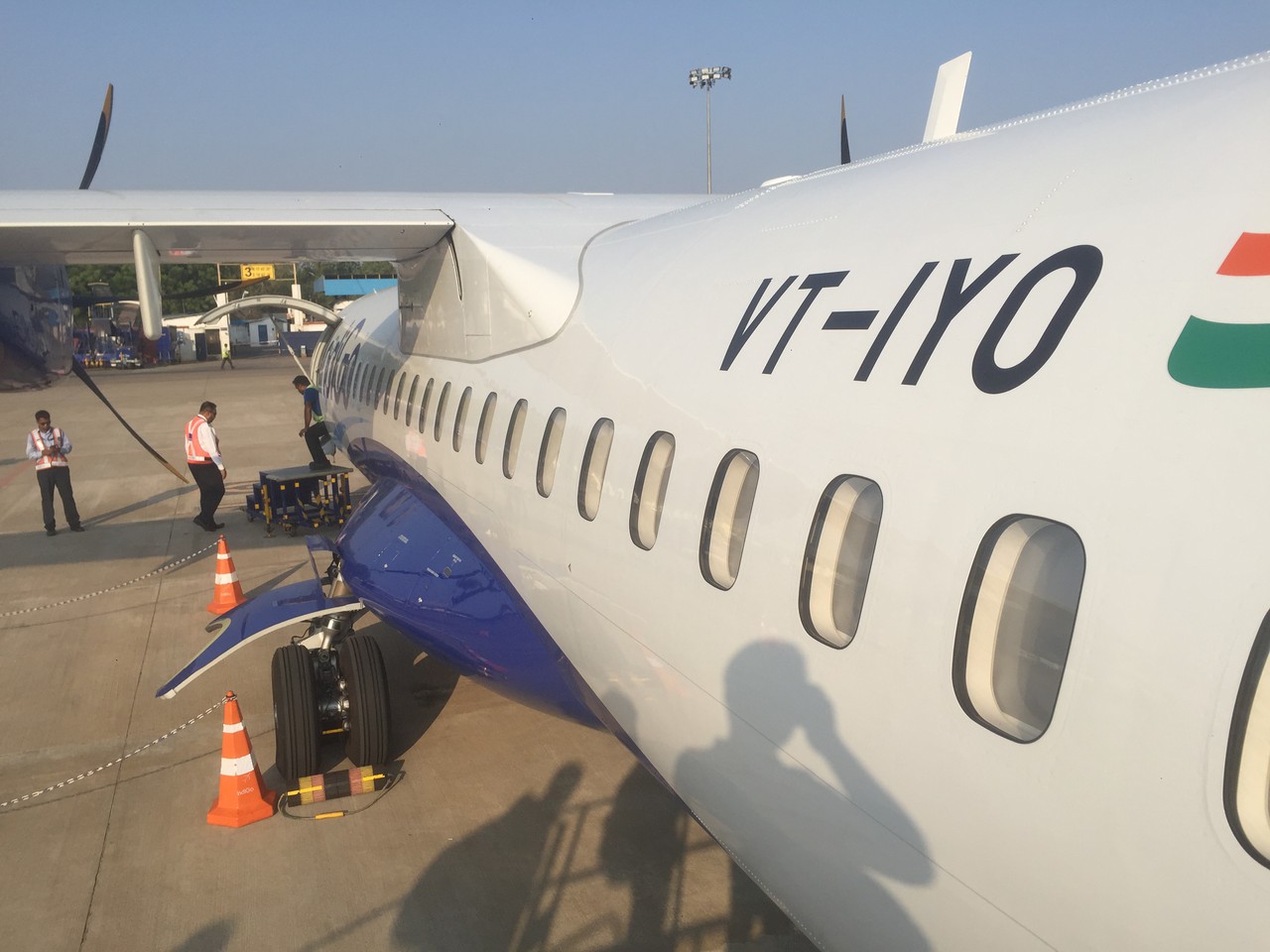 The ATR 72 was beautiful!
A very different Turboprop compared to ones I've flown on previously, namely the Canadian Bombardier Dash-8 Q400 and its Chinese Version the Xian MA60

The aircraft configured in the standard 2-2 configuration was in immaculate condition and maintained very well by IndiGo. The crew were probably one of the best that I've flown with, extremely attentive and happy to assist.  Today's flight was full and the crew had their hands full, however they proved their efficiency which was pretty impressive 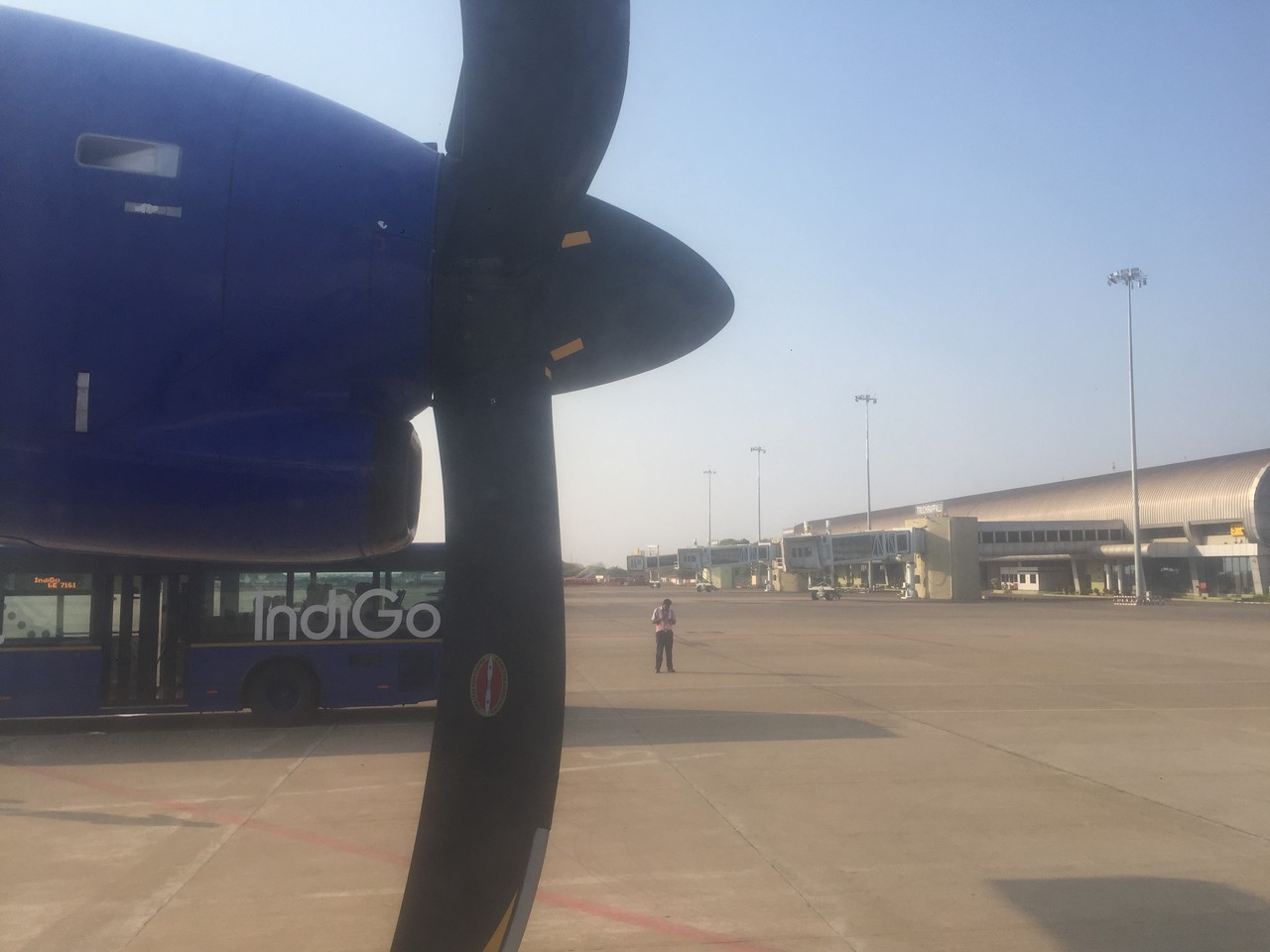 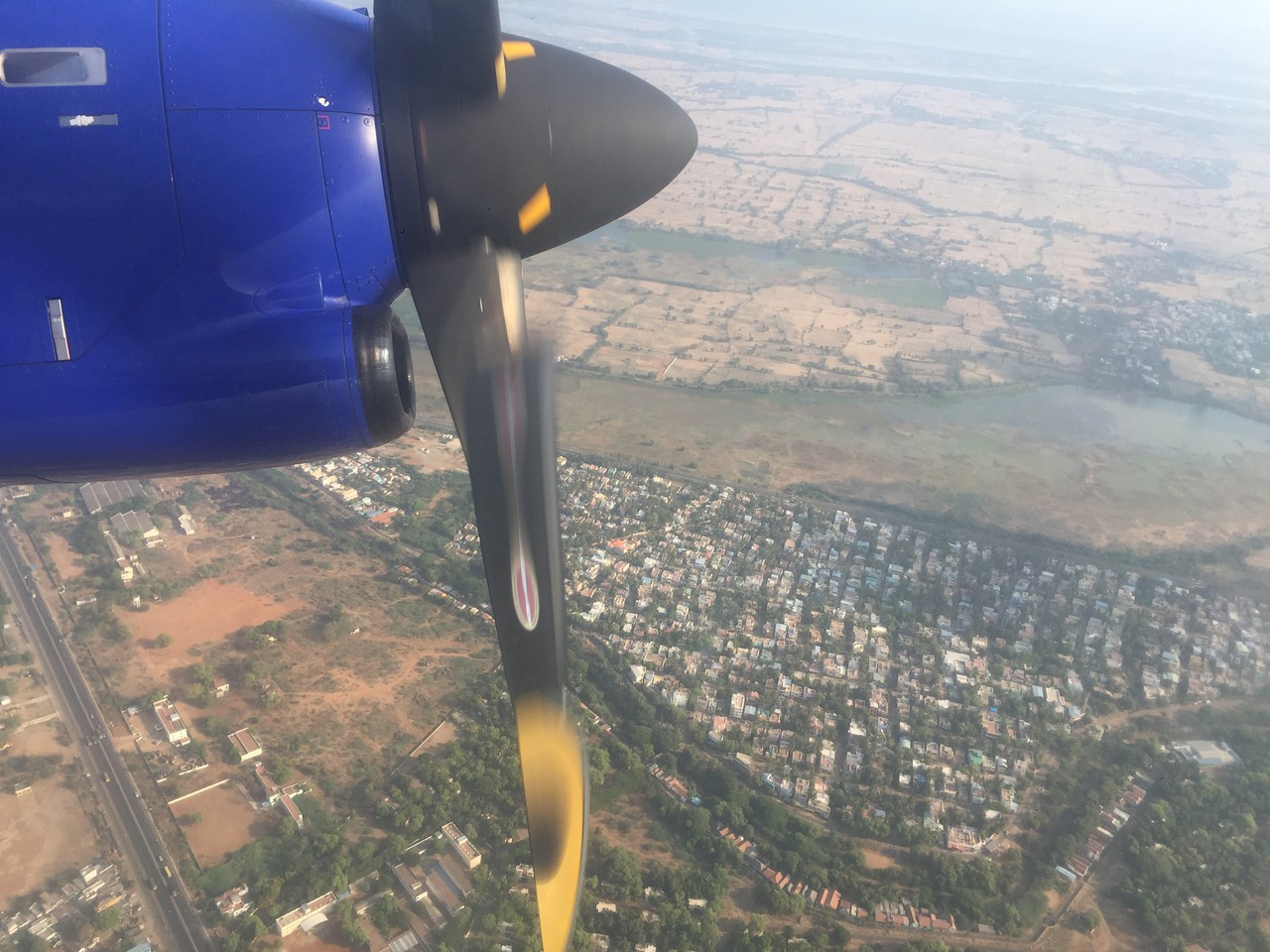 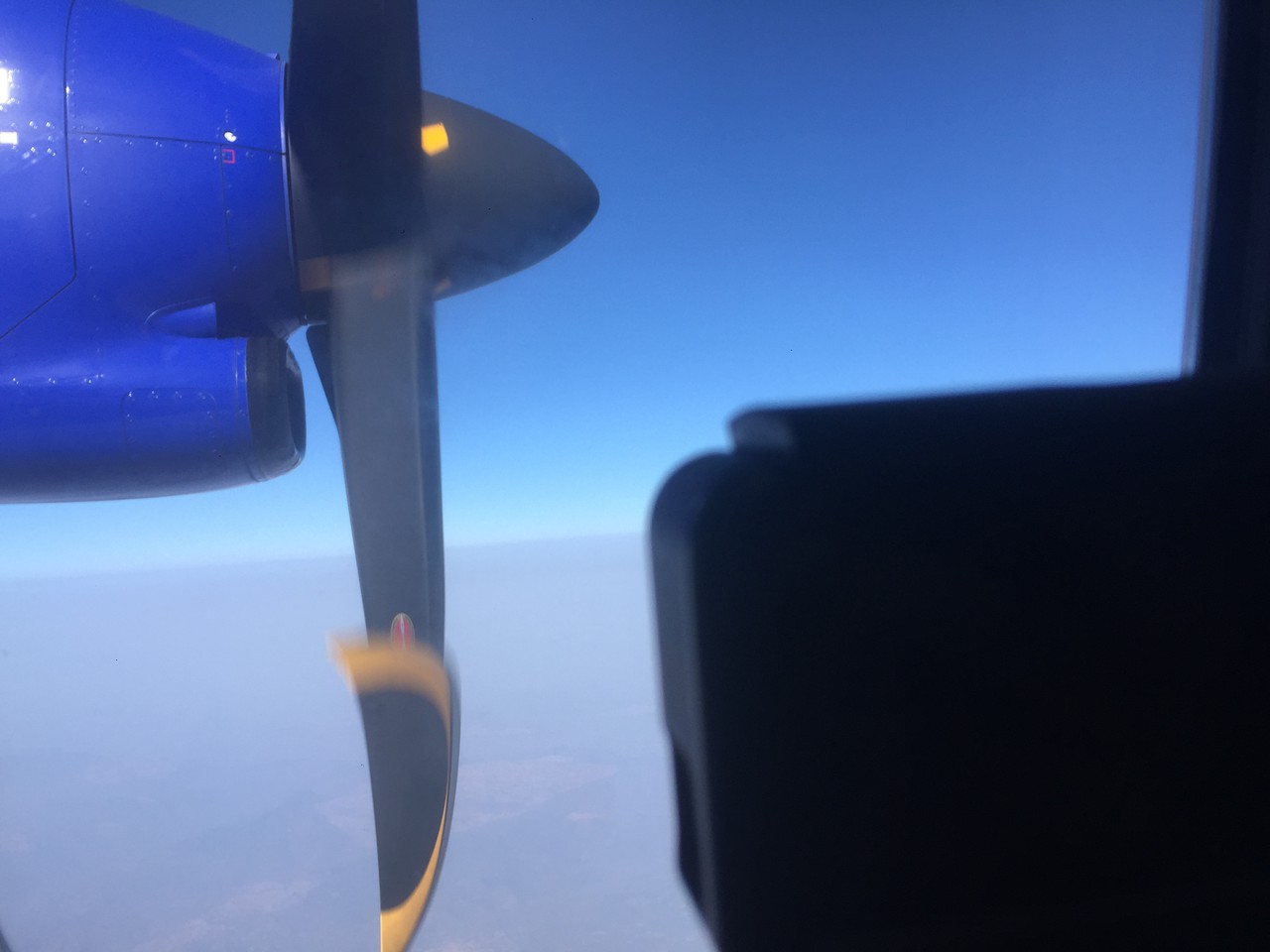 With IndiGo following a strict LCC policy, they did not provide any forms of IFE, however it was commendable that they did offer passengers water prior to the buy-on-board run that was carried out just as we hit cruising altitude

A generous seat-pitch, significantly better than most of the narrow-bodied aircraft flown on in the past would make 6E an automatic choice the next time I fly within India. I'd also look to fly on Air India's Regional Product (Alliance Air) too and maybe Jet Airways to try out their ATR product too (I do hope that they'd be bailed out sooner or later) 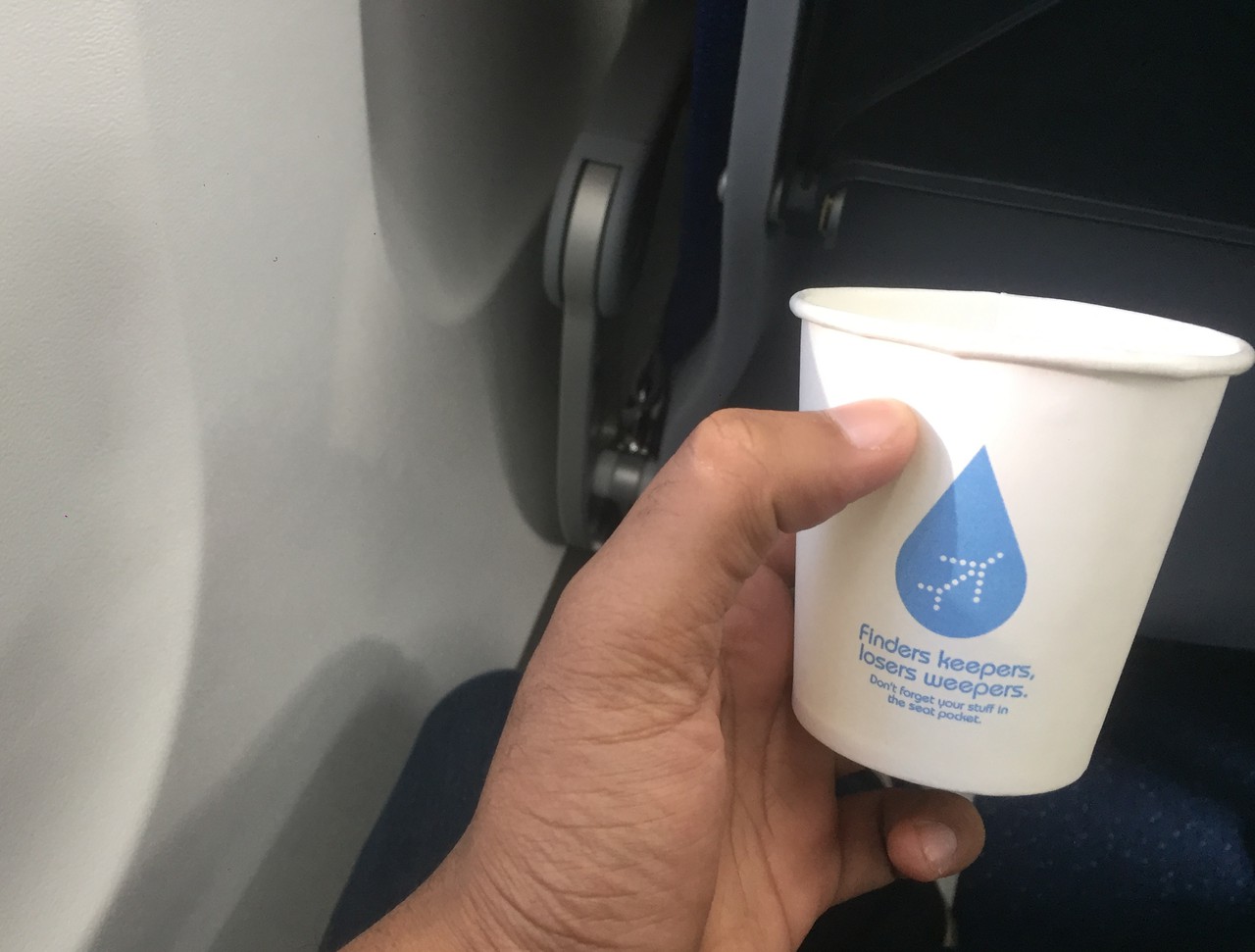 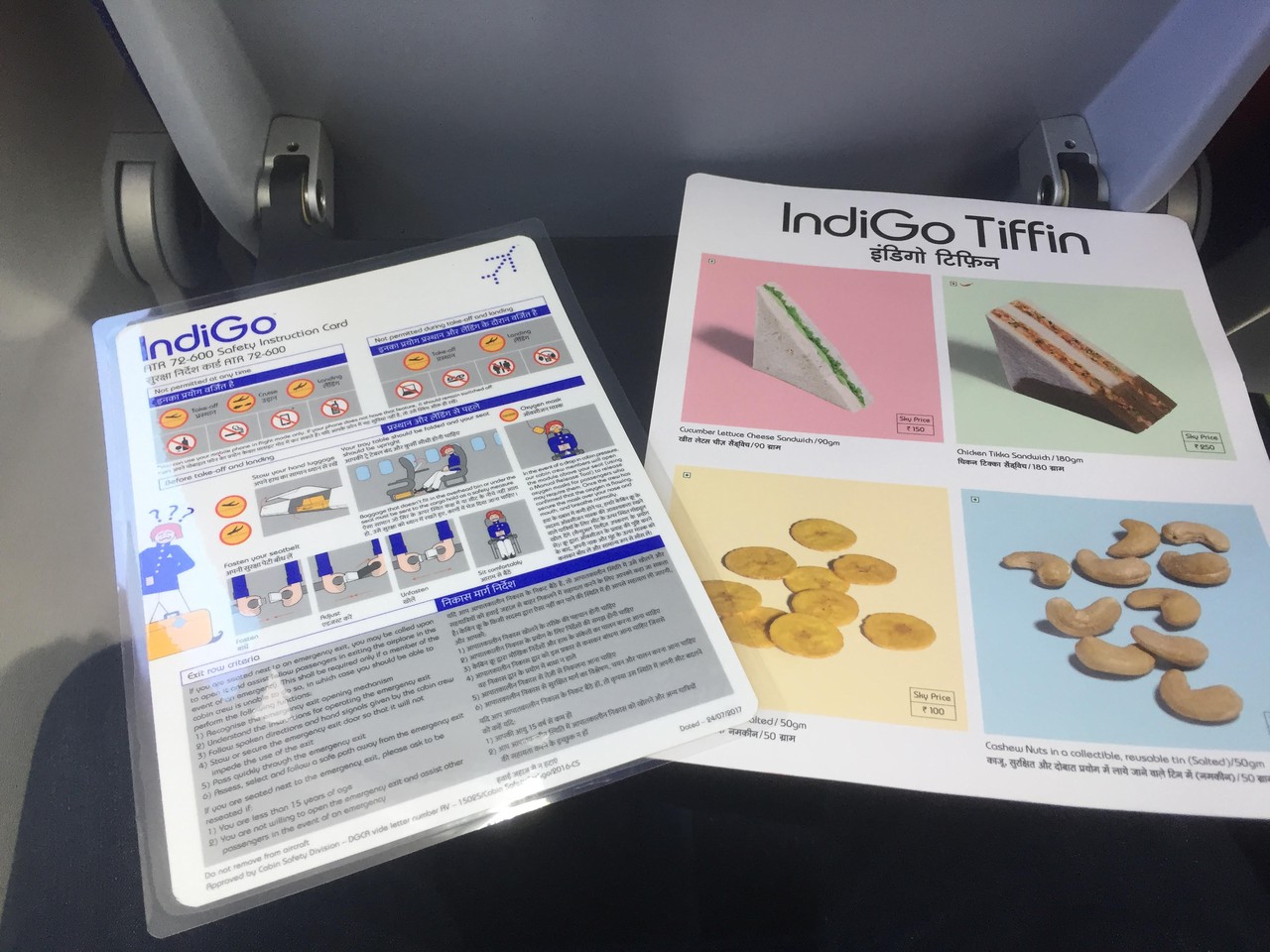 Flying time on this sector was under 45 minutes, the crew handed out pre-ordered meals which were limited few snacks, sandwiches, drinks etc.
If you are planning to grab a bite on-board, pre-ordering pre-flight would be recommended as the on-board prices are a tad bit on the expensive side 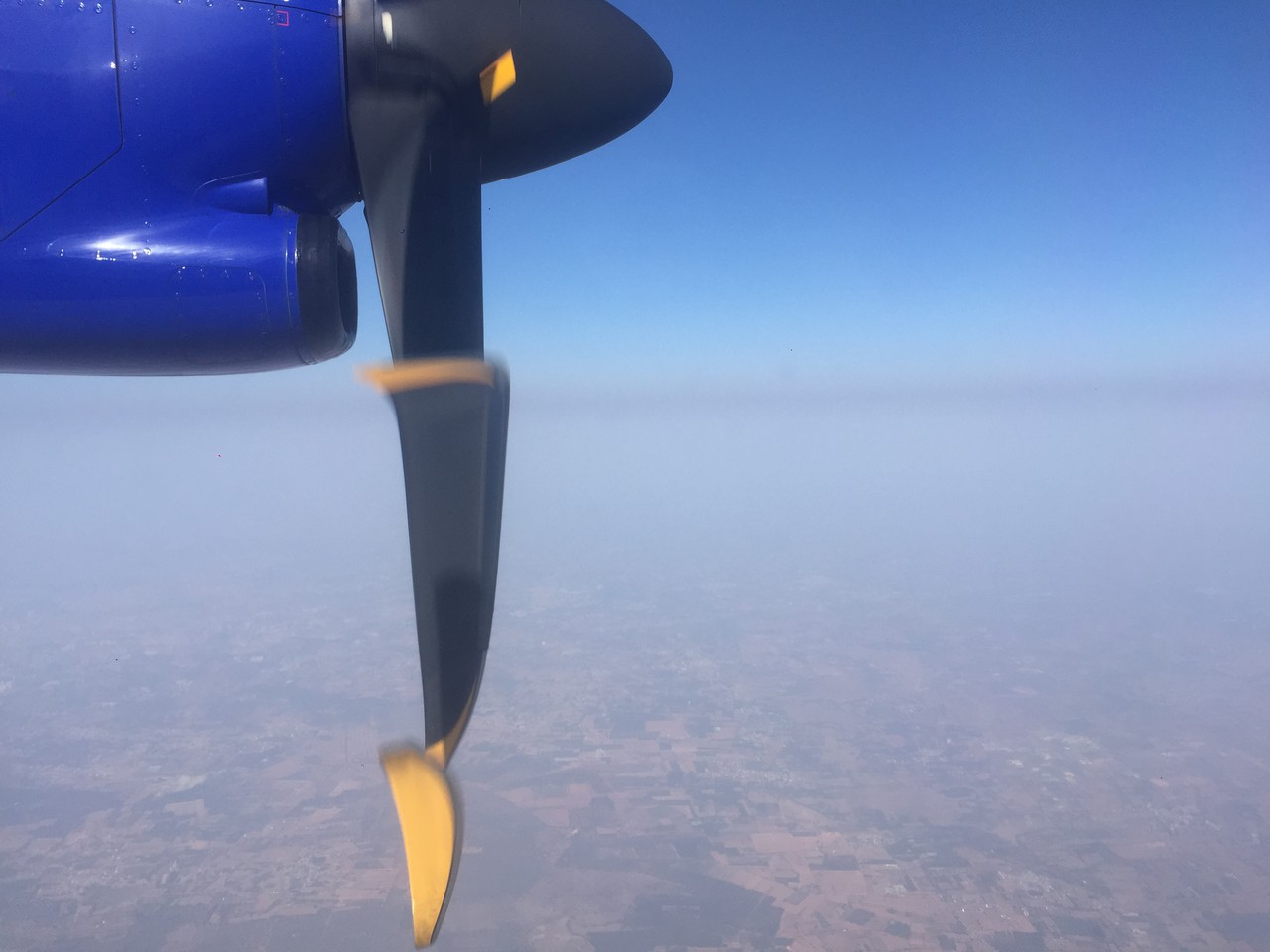 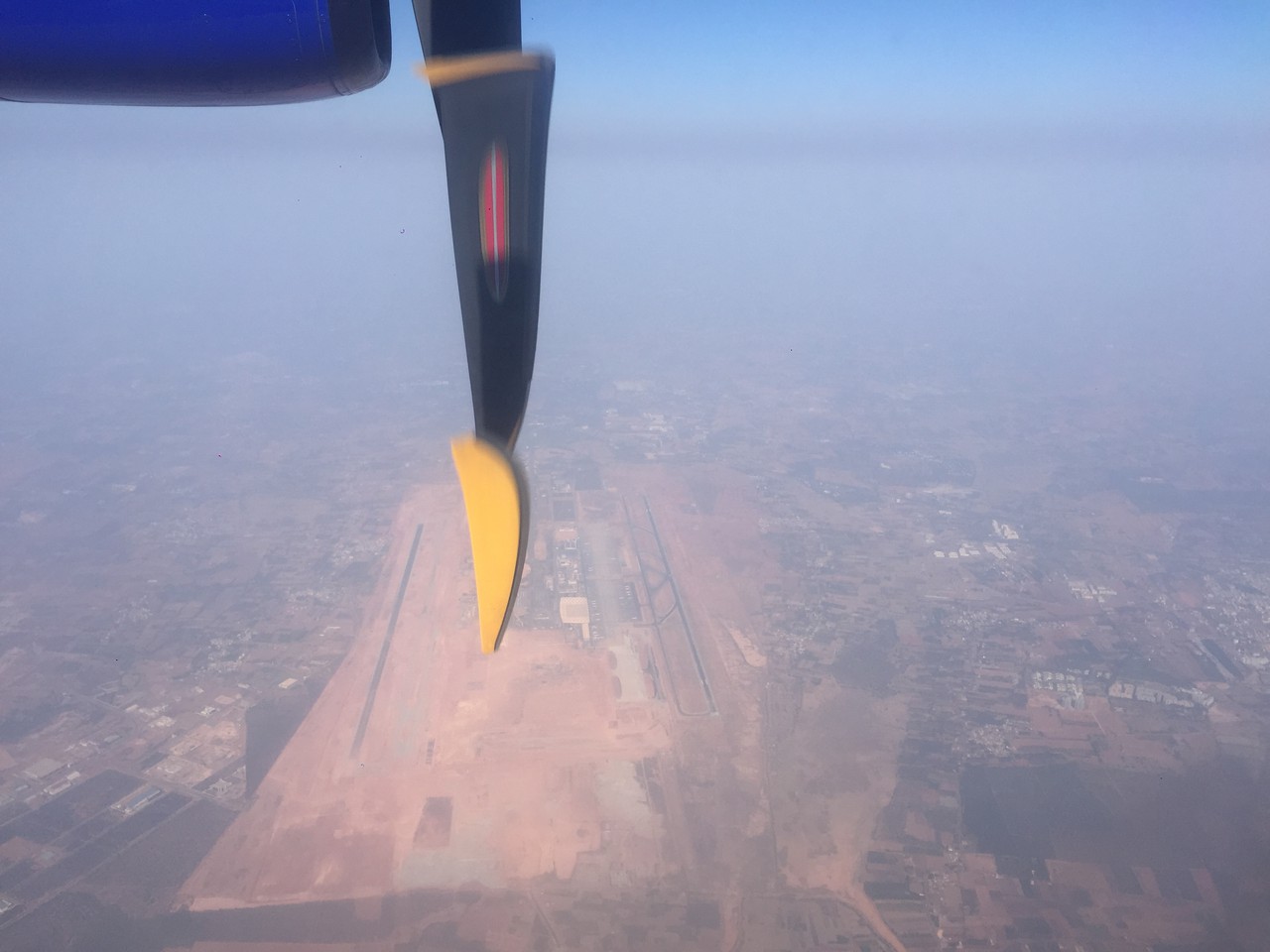 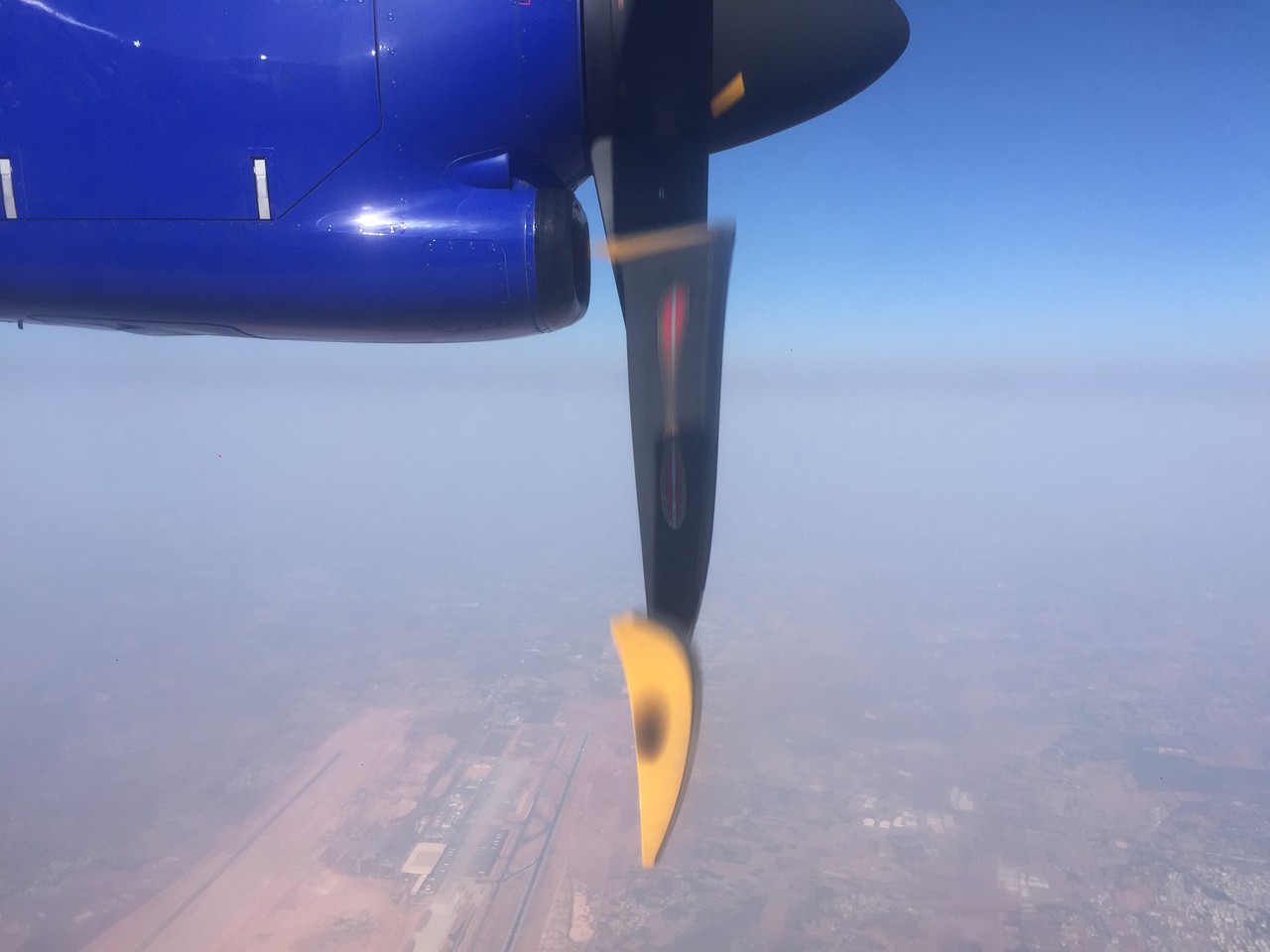 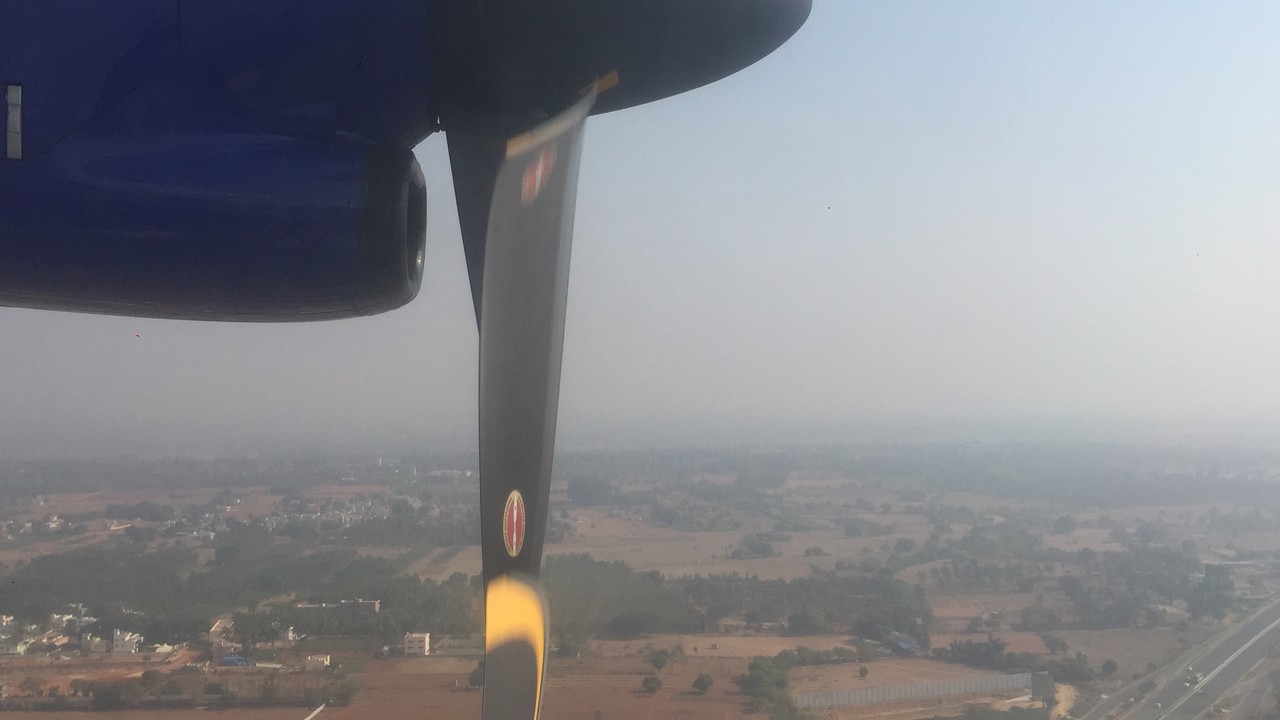 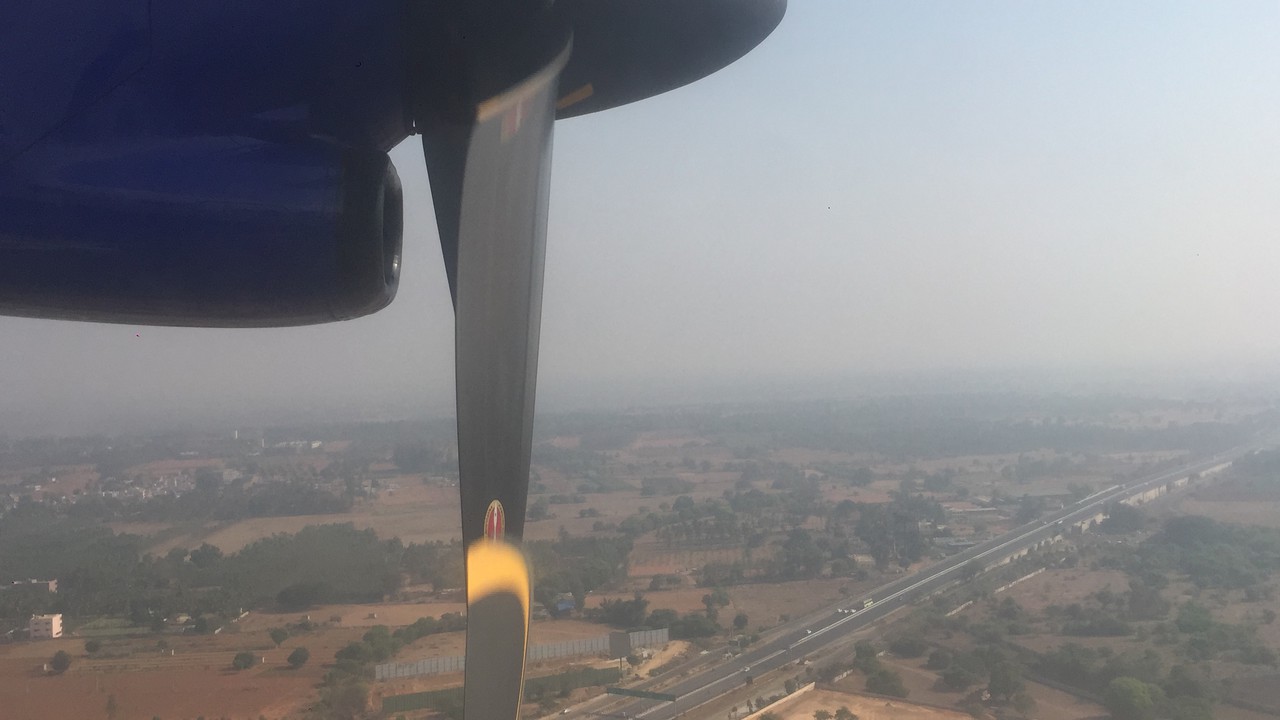 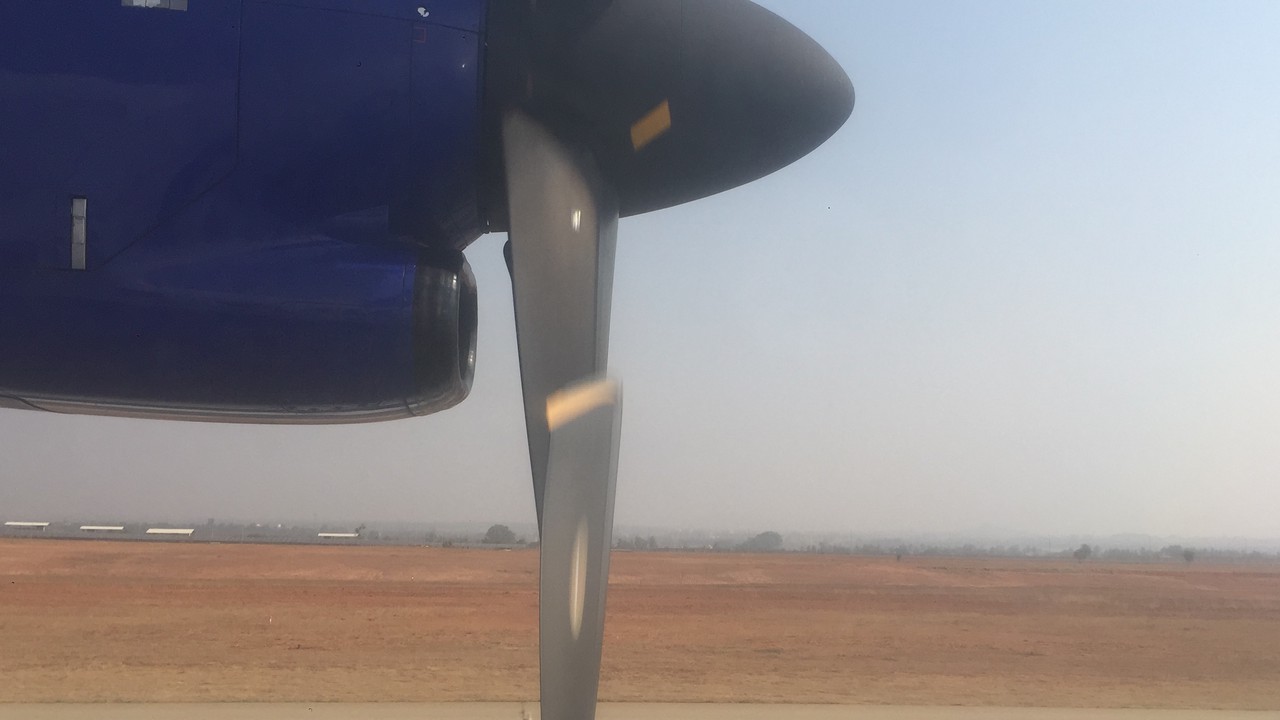 Touched down ahead of schedule and taxied to a remote apron.

The electrical systems and the air conditioning was switched off, leaving the cabin in darkness with passengers still being in the aircraft. It was probably a faulty GPU or maybe the fact that IndiGo may have taken "cost-cutting" a little too seriously. Everything was restored in a matter of minutes though 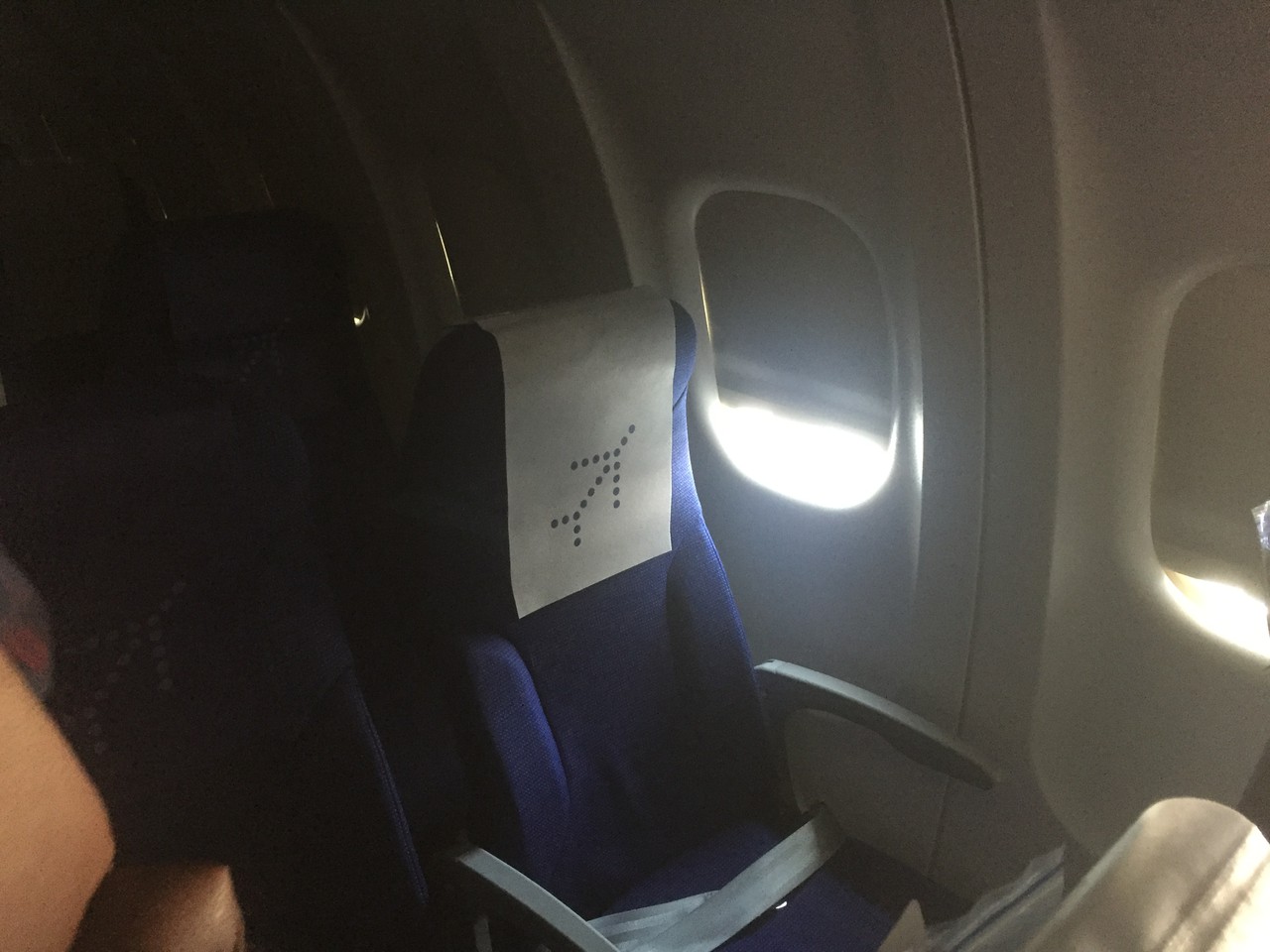 Spotted Jet Airways Boeing 737 fleet along the way, including heavies form Emirates and Oman Air and AirAsia India, GoAir, IndiGo and the National Carrier : Air India's narrow bodied Airbus fleet along with a few SpiceJet turboprops scattered around the apron and its grounded Boeing 737 Max 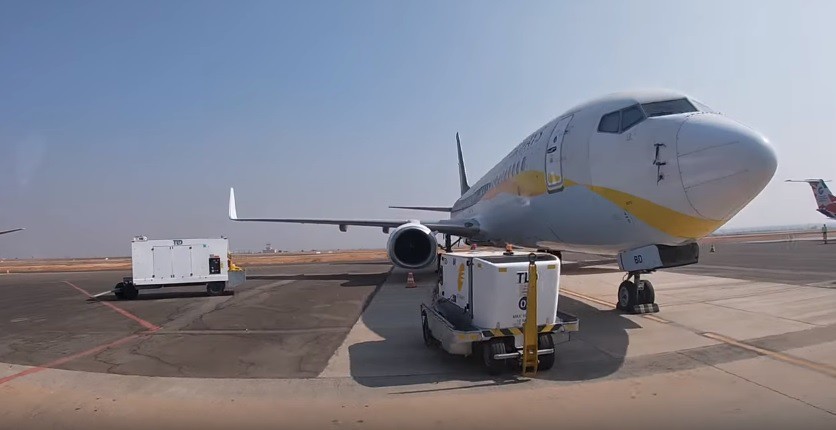 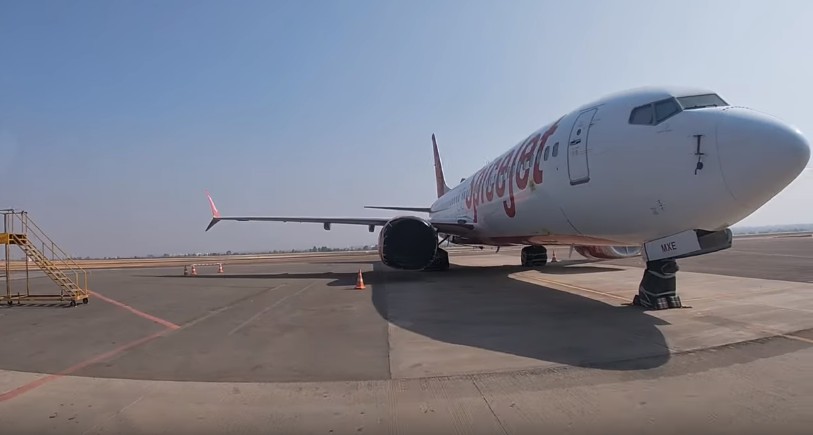 Bangalore was warmer than expected and the airport hadn't changed much, and was still in my view one of India's cleanest, reminded me of Singapore- Changi Airport in a way
We received our baggage after a short wait of  10-15 minutes and made our way to the bus terminal operated by Bangalore Metropolitan Transport Corporation (BMTC) to get to our Hotel which was an more than an hours drive away.

If you are a solo traveler, I'd recommend taking a Bus to the city which is the cheapest option. Bangalore does have Uber and costs about 3 times more than a price of a bus ticket to the city. However, Bangalore is a city of scam, especially for first timers. Since this was my 3rd I was well aware of these "Tourist Scams" and knew how to talk my way out of them.
Always have GPS when travelling by Tuk Tuk or Cab, since these guys aren't the honest type unlike the guys down in Tamil Nadu.

Our travels in Tamil Nadu comprised of a 3 1/2 hour train ride from Trichy Central to the Coastal town of Nagore. The Karaikal Express was the only train on scheduled for the early hours of the day and the only train that had seats available on our selected date of travel. Returning to Trichy was a nightmare, the only train that served the sector departed late-evening and direct buses weren't available on this sector either. Our options were to travel to Nagapattinam located 6 Km South of Nagore and take an Express Bus to Trichy Central. A horrible bus ride of nearly 5 hours followed thereafter 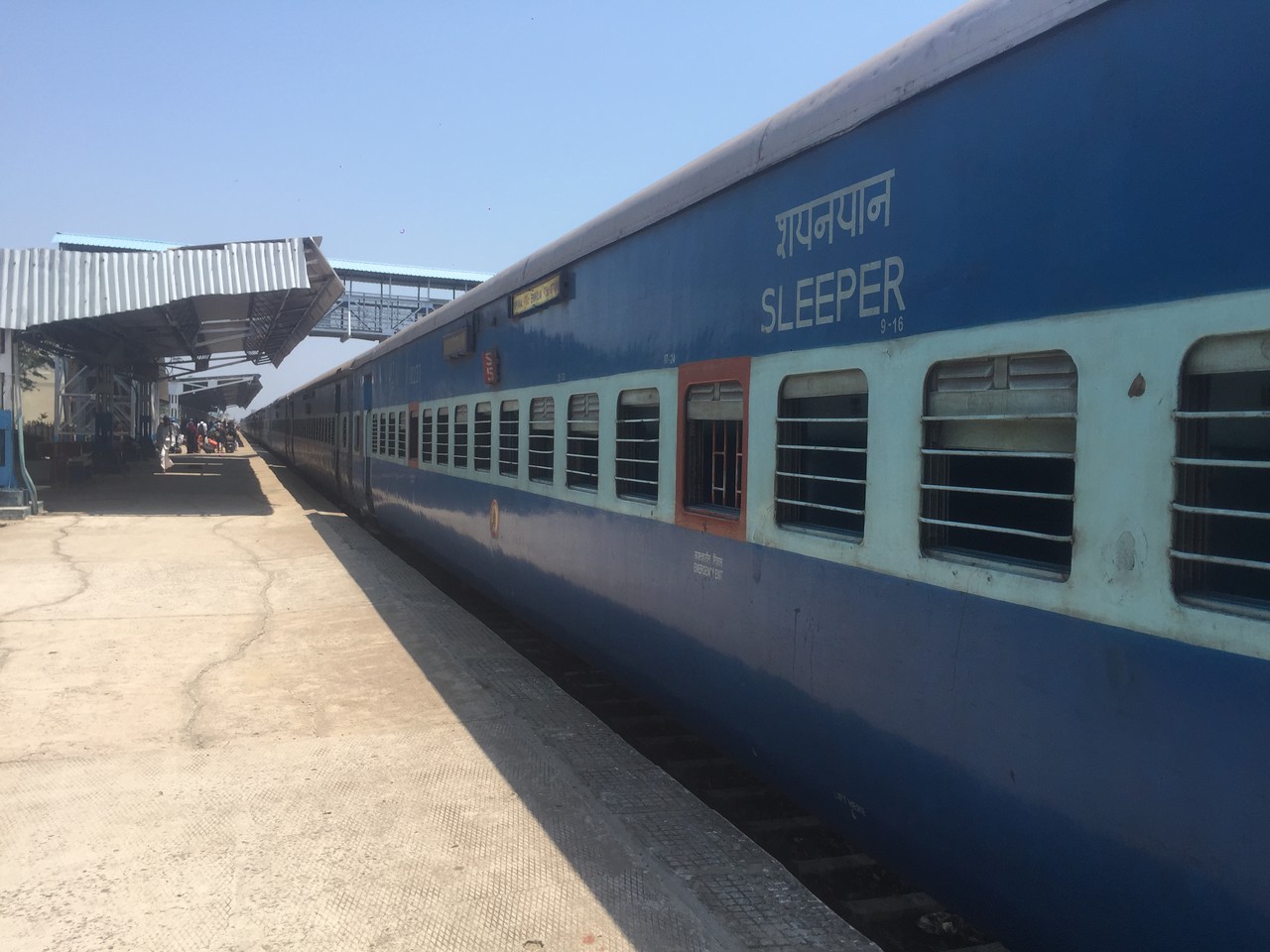 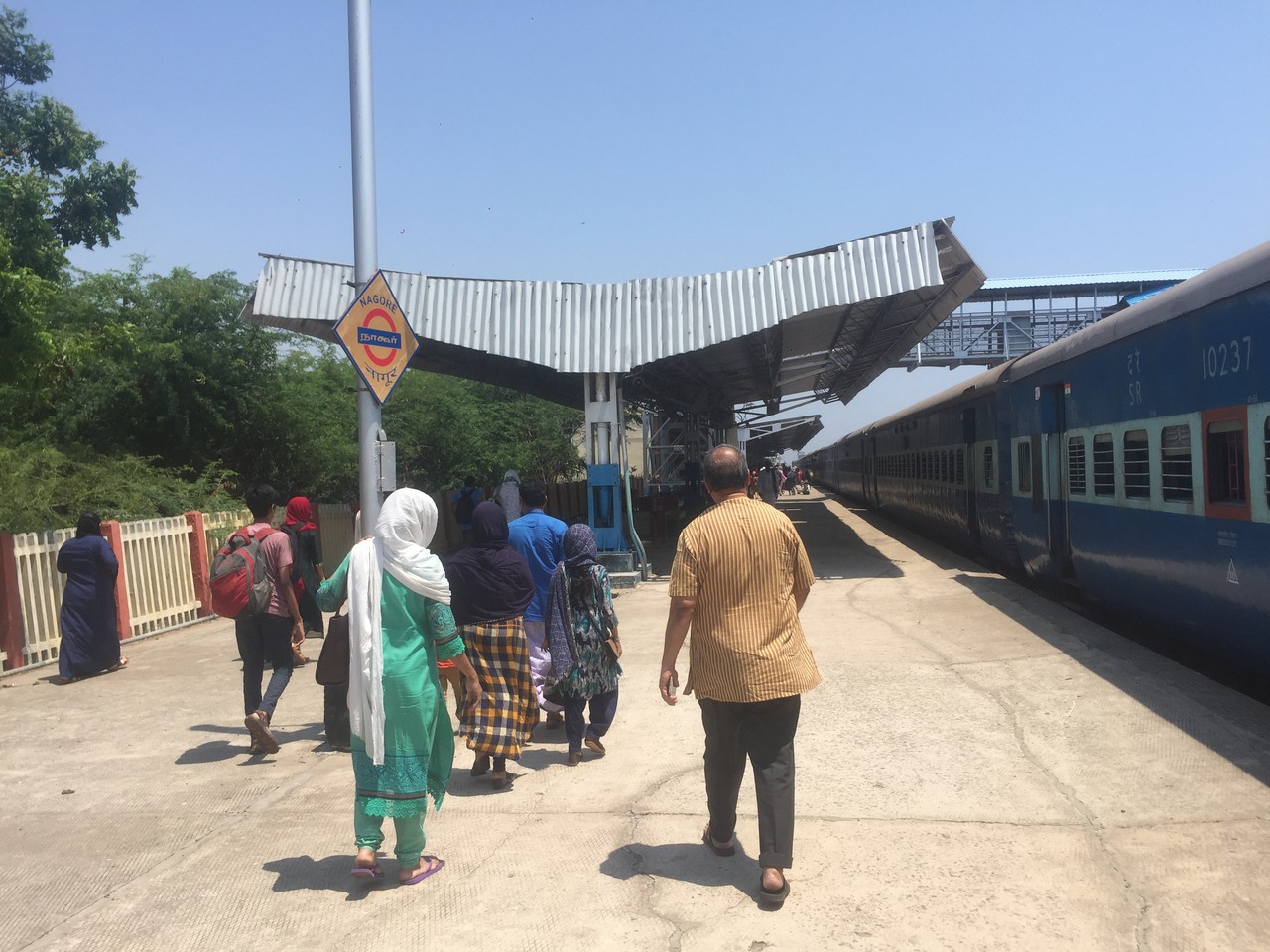 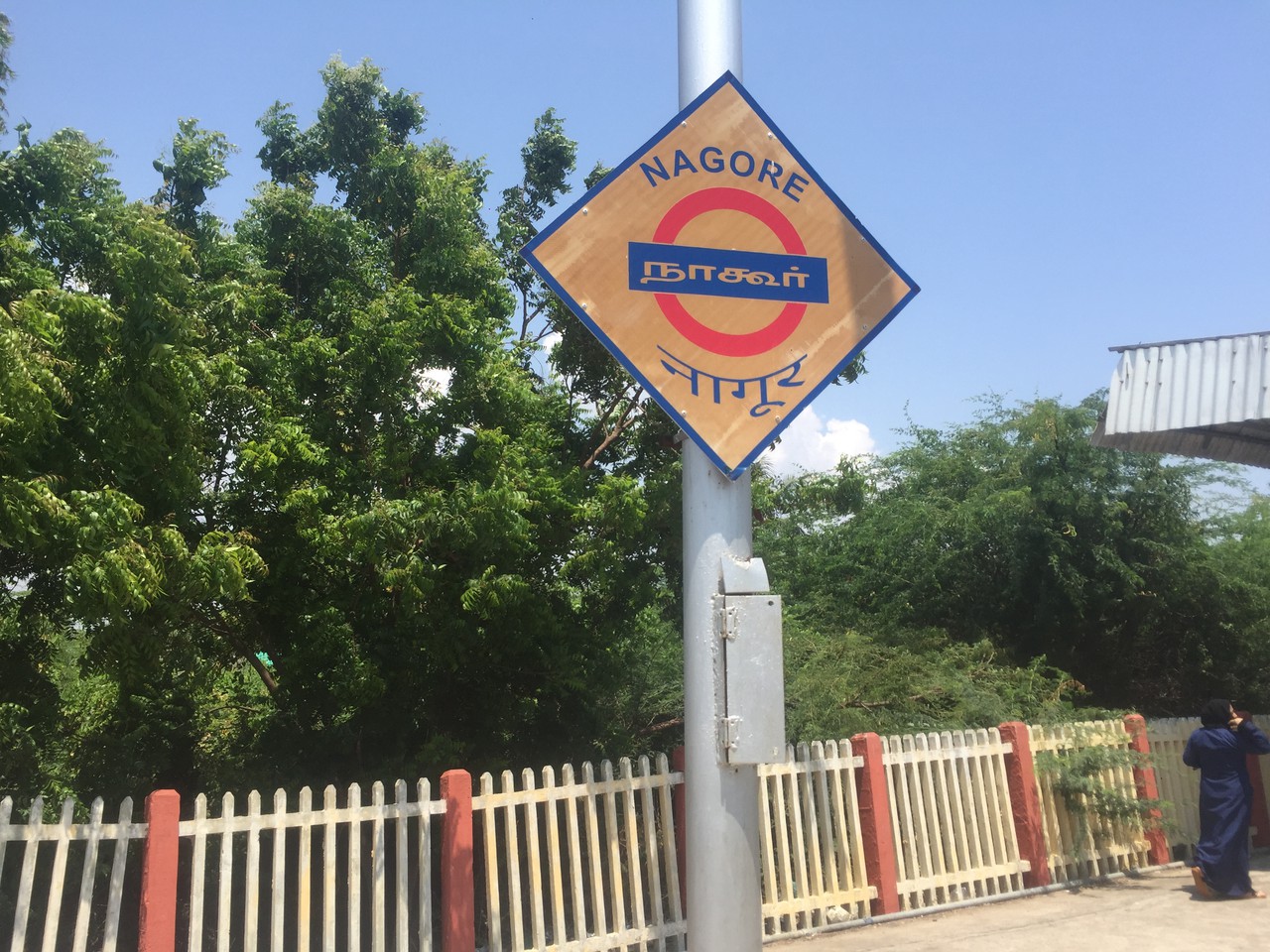 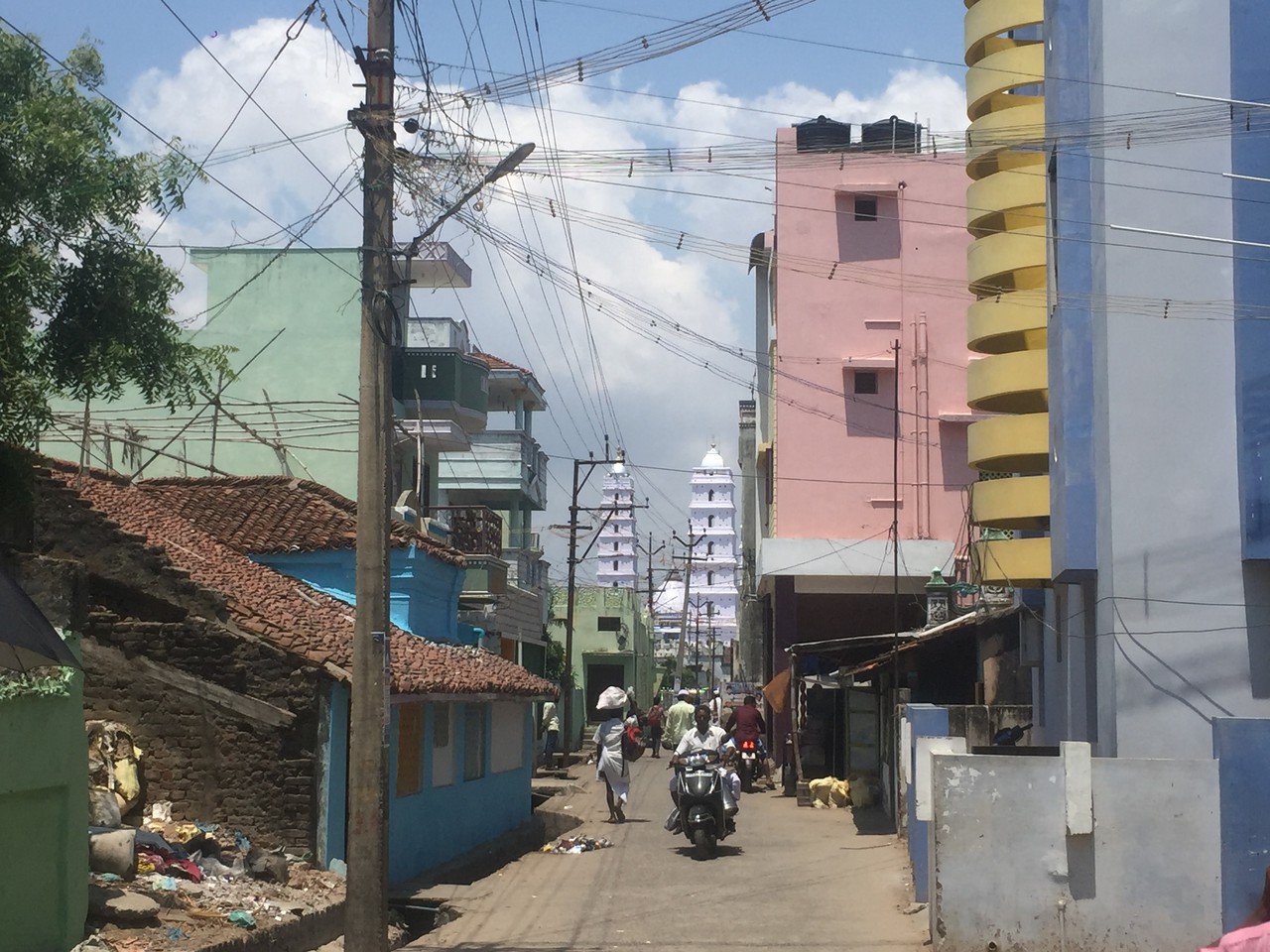 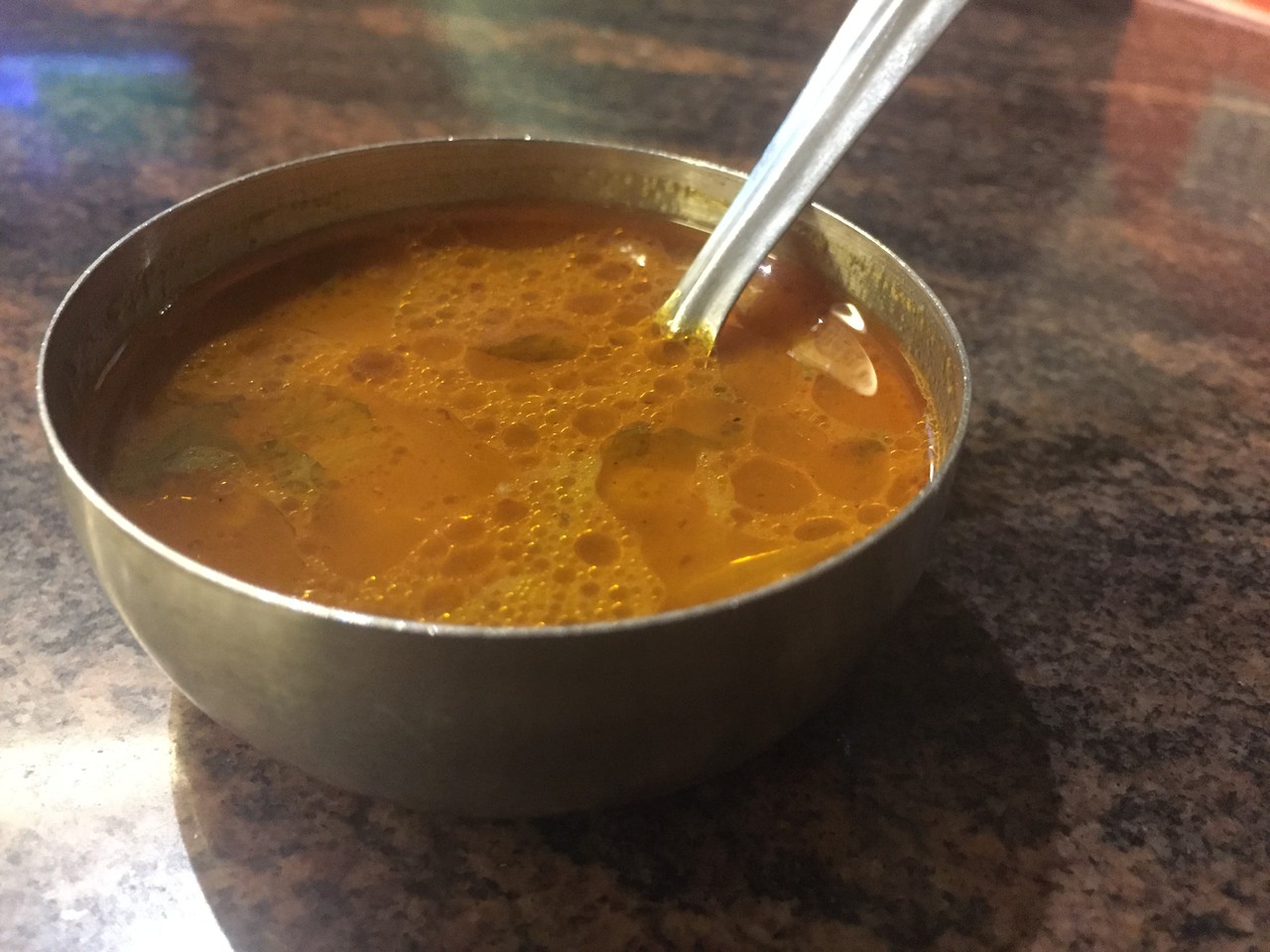 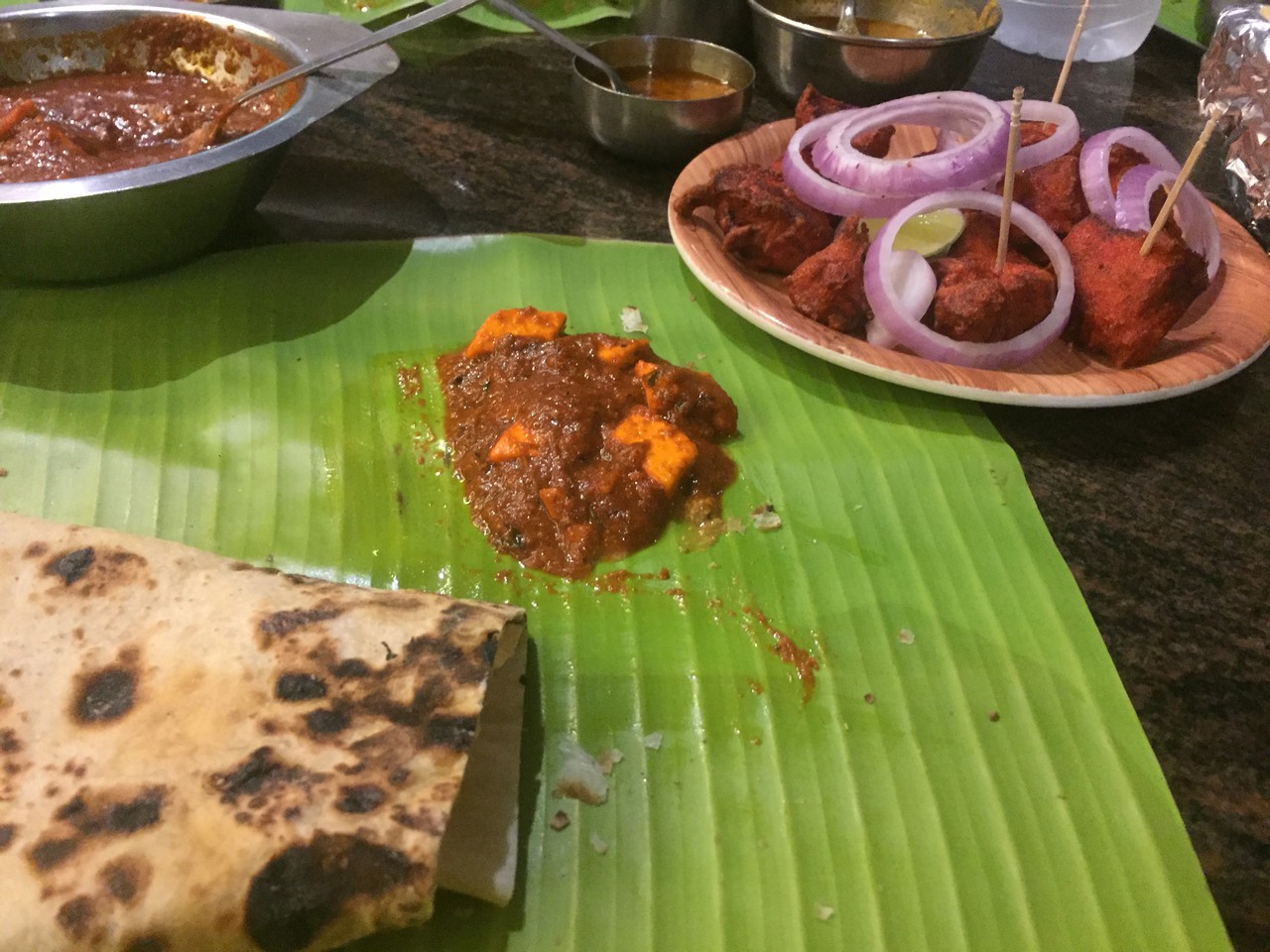 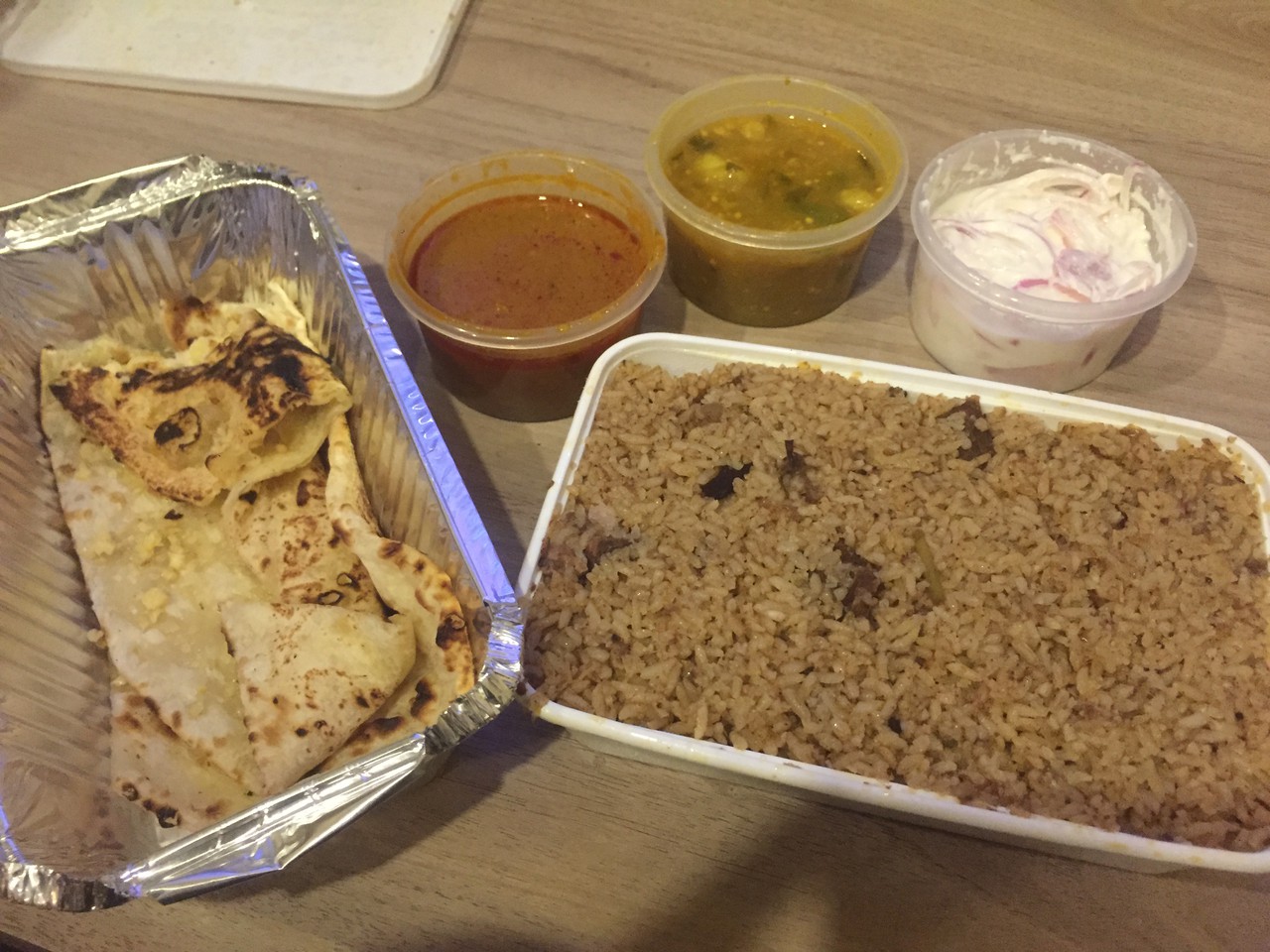 Overall an Impressive experience on India's Largest LCC !
I'd love to fly with them again, their ATR's are exceptional and is one airline that I'd recommend them to anyone looking for a good deal and a wonderful flying experience