By bldavid GOLD 503
Published on 16th June 2019
I had been planning to visit Shetland and Orkney for a long time, and I also wanted to try the world’s shortest flight between Westray and Papa Westray.

While most of the UK’s airlines work either on the low-cost model or target holiday destinations, Loganair is very different. It’s a regional airline with a focus on Shetland, Orkney and the Hebrides in Scotland where its services are vital for many smaller communities. It operates a fleet of small aircraft and regional jets, such as Twin Otters, BN-2’s, Saab 340’s, Embraer 135’s and 145’s.

Loganair offers a much more personal service and experience than almost any other airline in the UK. And their Orkney Inter Island Air Service takes your flight experience to a completely different level. I had the following conversation when I went to the check-in desk in Kirkwall:

“Hi, what can I do for you?”
“I’m on the flight to Westray”
“What’s your name”
“David” (note: I said only my first name, not my full name)
“OK, then you’re checked in”
“There’s no boarding pass?”
“No. Boarding will be through this door five minutes before departure.” I was originally planning to spend the night at Westray but as my flight from Shetland to Orkney was cancelled the day before I was rebooked on the Kirkwall – Westray – Papa Westray – Kirkwall flight, flying on the same plane and staying on (or near to) it on both small islands.

Boarding was really five minutes before departure. As no boarding passes had been issued there were no boarding passes to be checked – the unbelievably friendly ground agent remembered (or knew) all passengers. We walked the few meters to the plane. 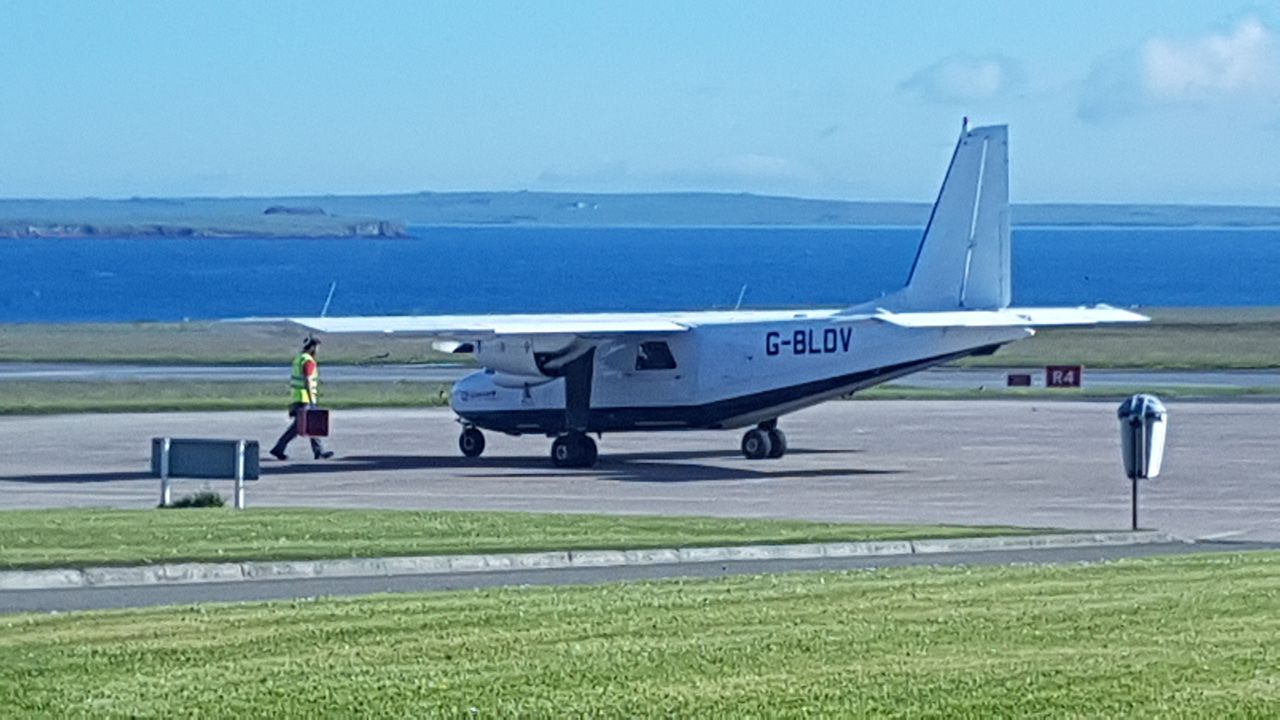 The plane was a BN2A Islander built in 1986, registration number G-BLDV. It has two seats for the pilots but is single-pilot certified and is flown by a single pilot. 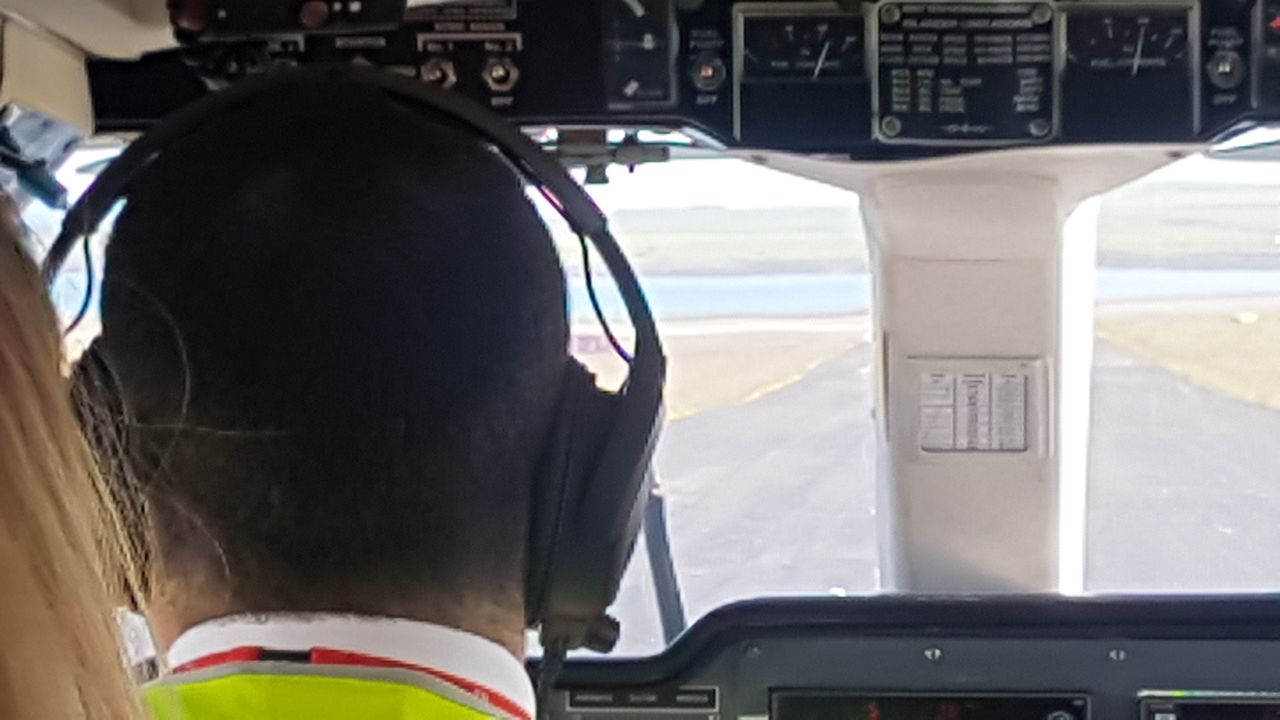 There are 8 passenger seat with four rows of two seats each. There’s no aisle; boarding is directly from the side doors to the seats. There’s no seat allocation at check-in but the ground crew tells you where to sit. There’s of course no cabin crew. 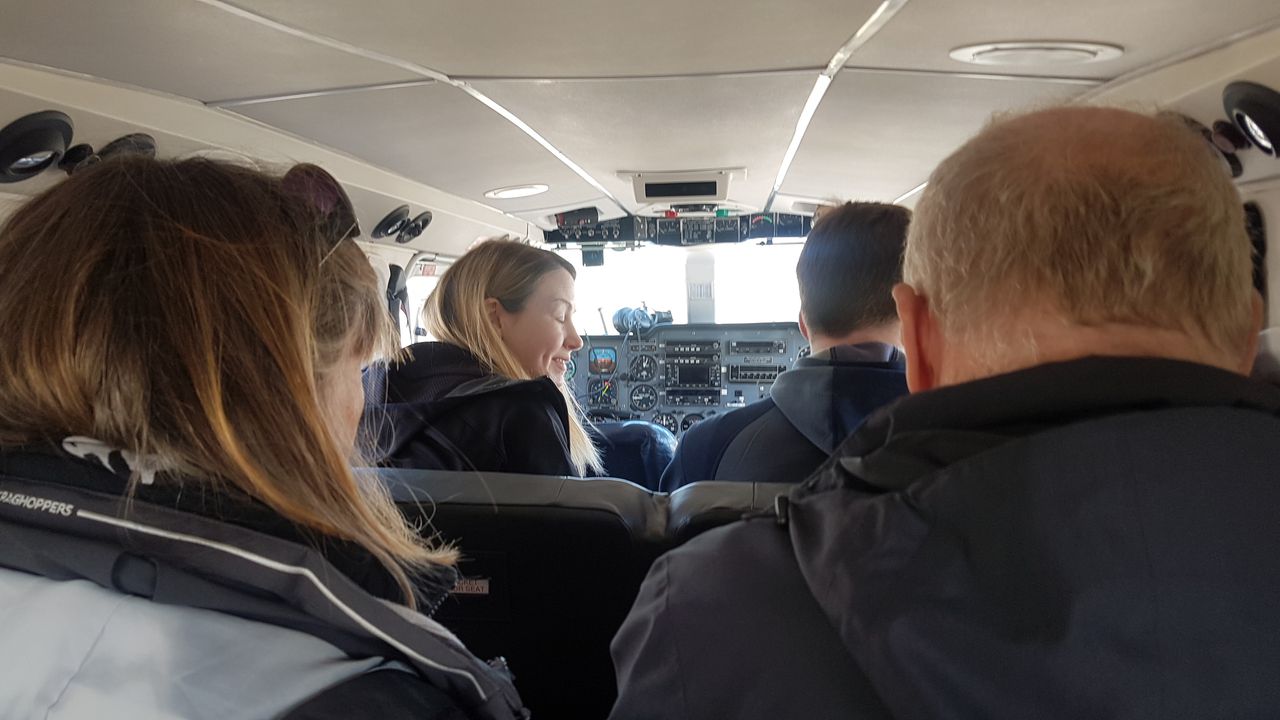 We had nice views over the southwest of Orkney Mainland immediately after take-off. 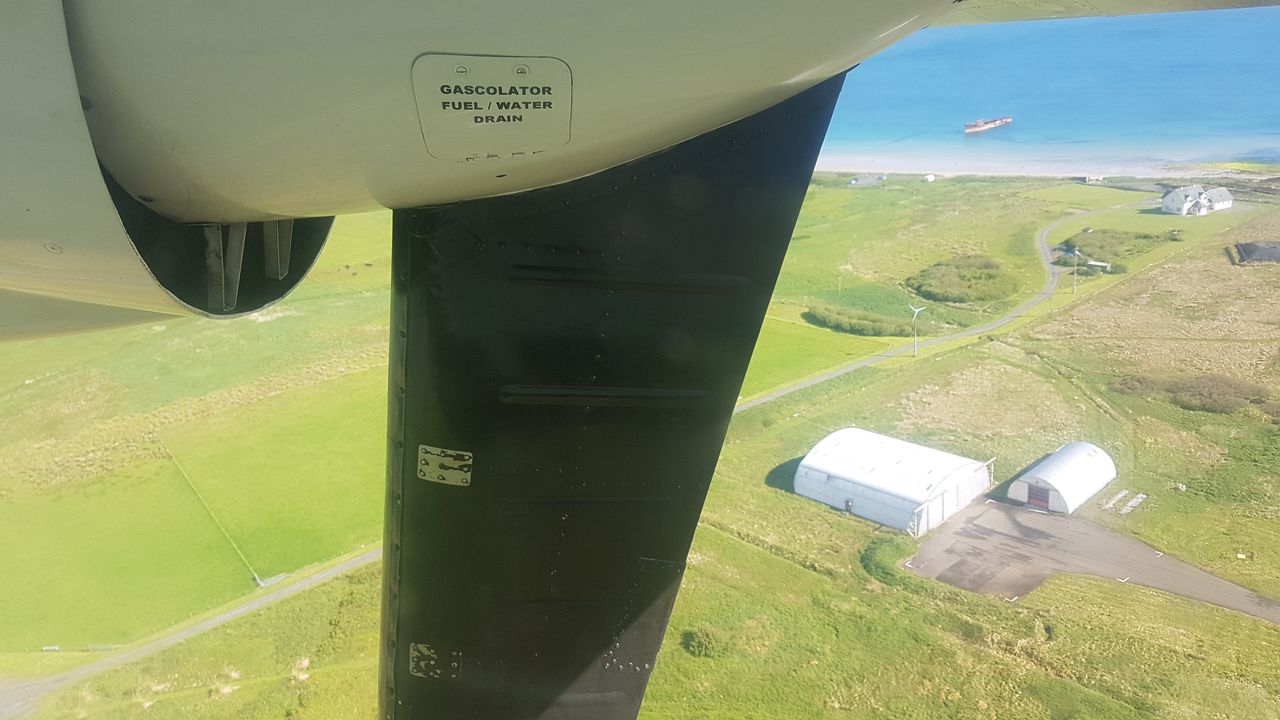 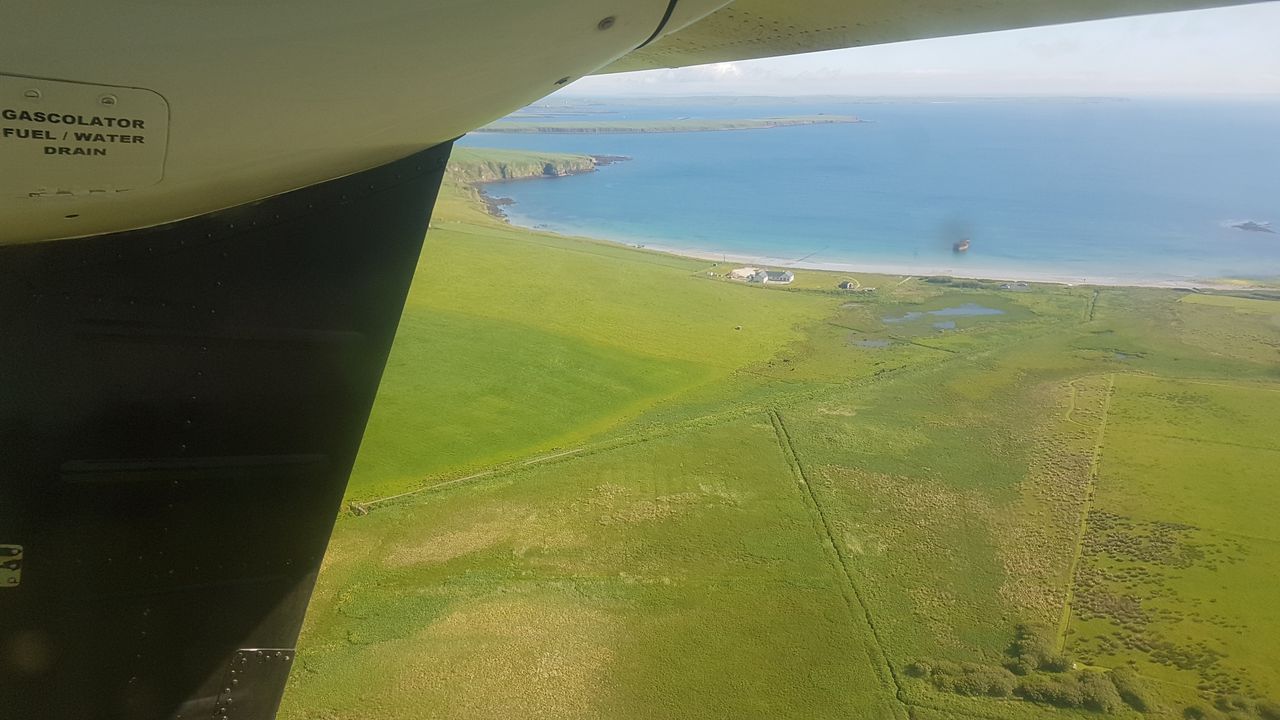 We turned to the North so we overflew Kirkwall 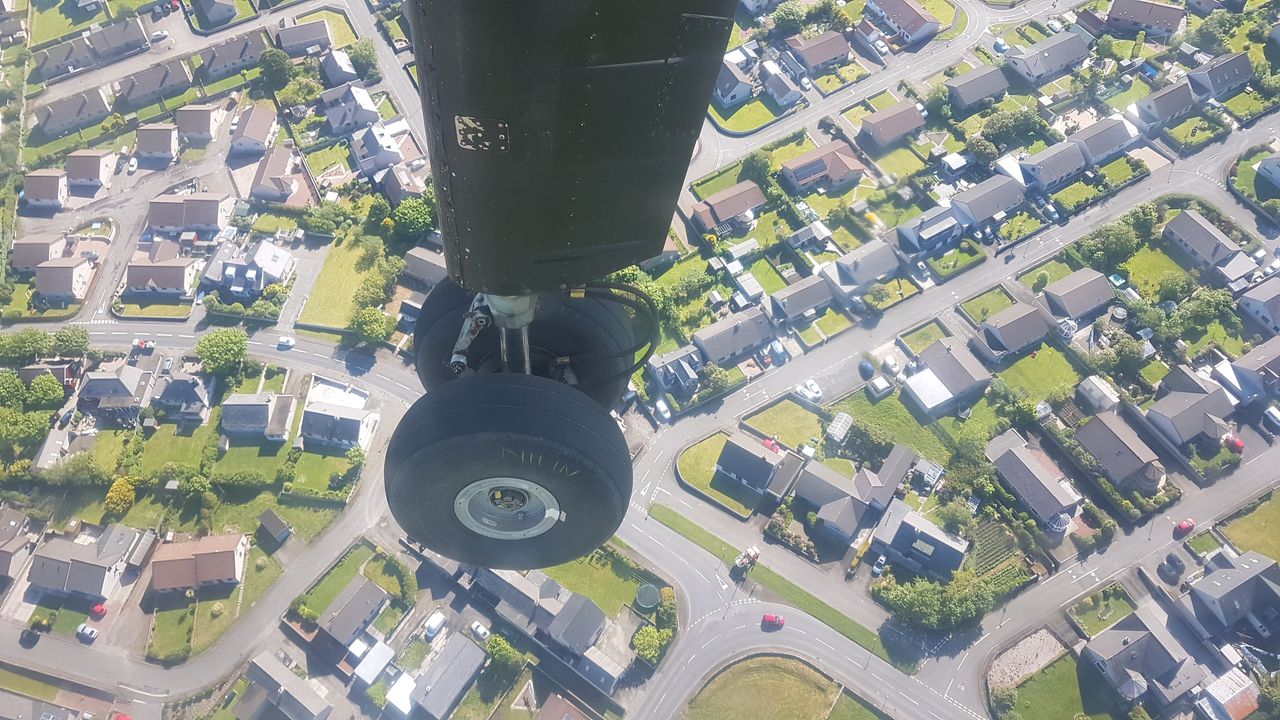 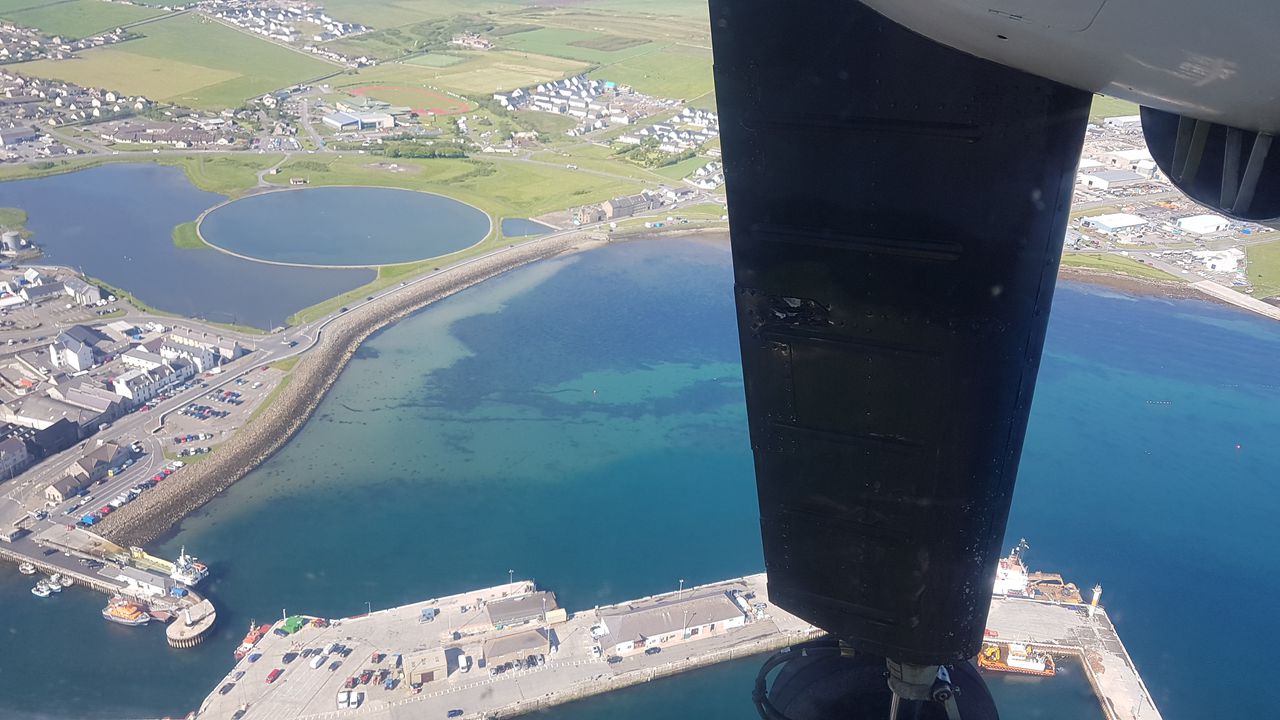 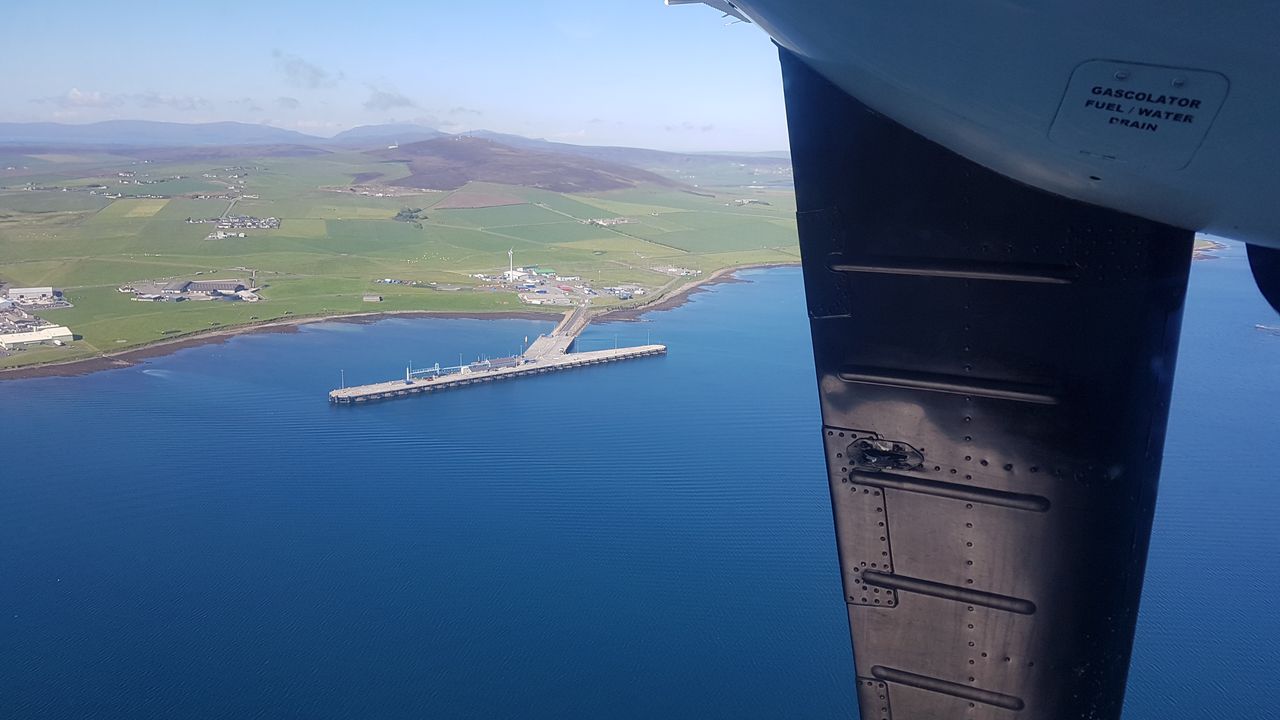 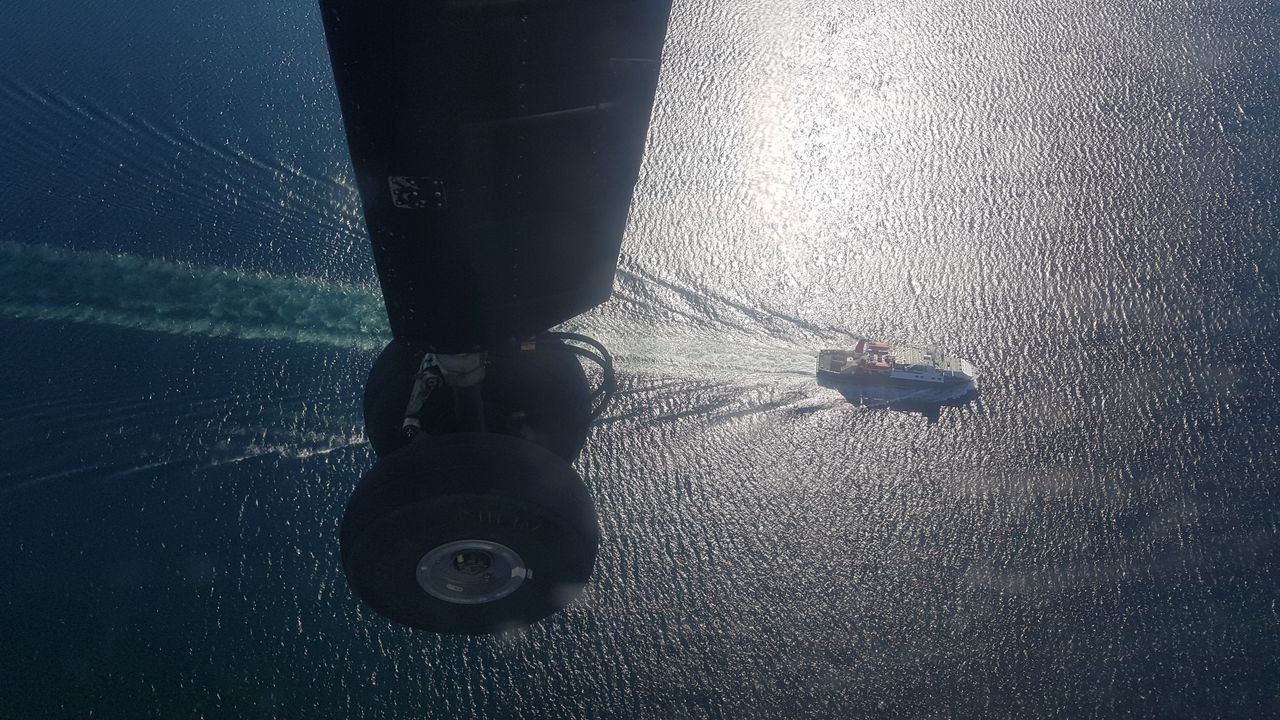 Rousay Sound between the islands of Rousay and Egilsay 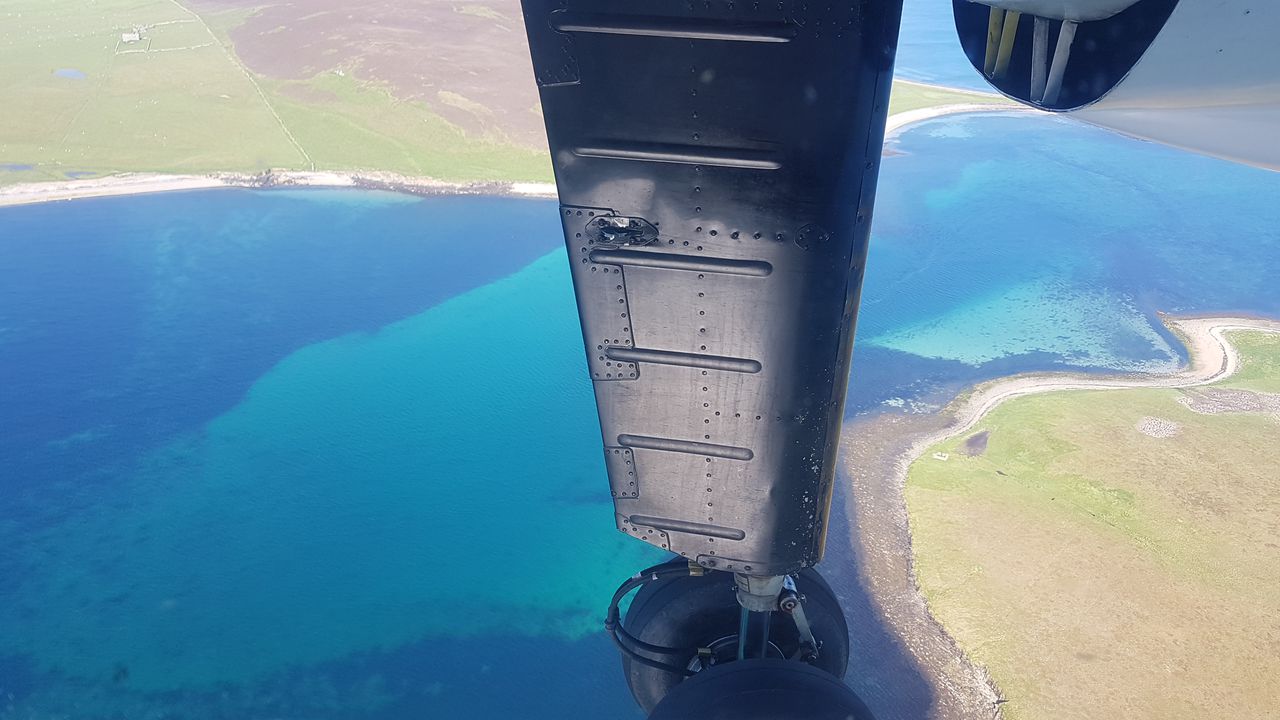 This is probably the very small island of Kili Holm Approaching Westray. The size of the island is 47 square kilometres and the population is about 600 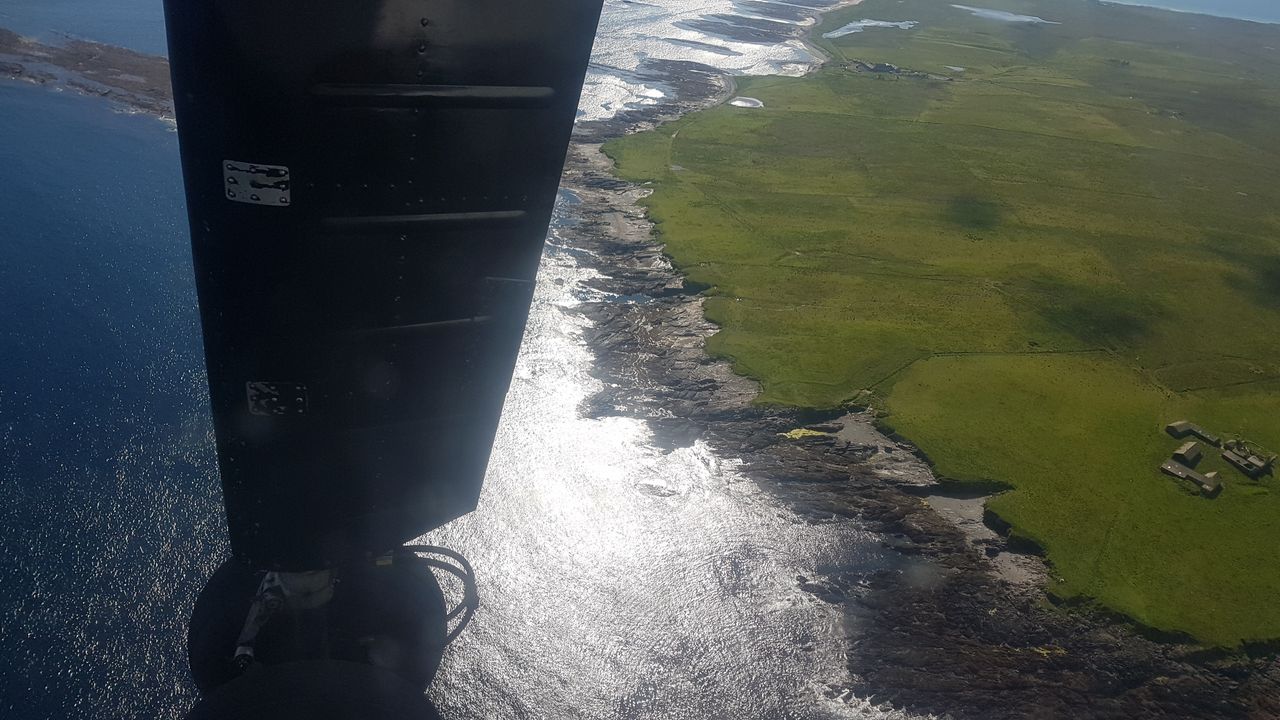 Orkney has some of the most beautiful beaches in Europe. Only if the weather was always as nice as it was on this day… 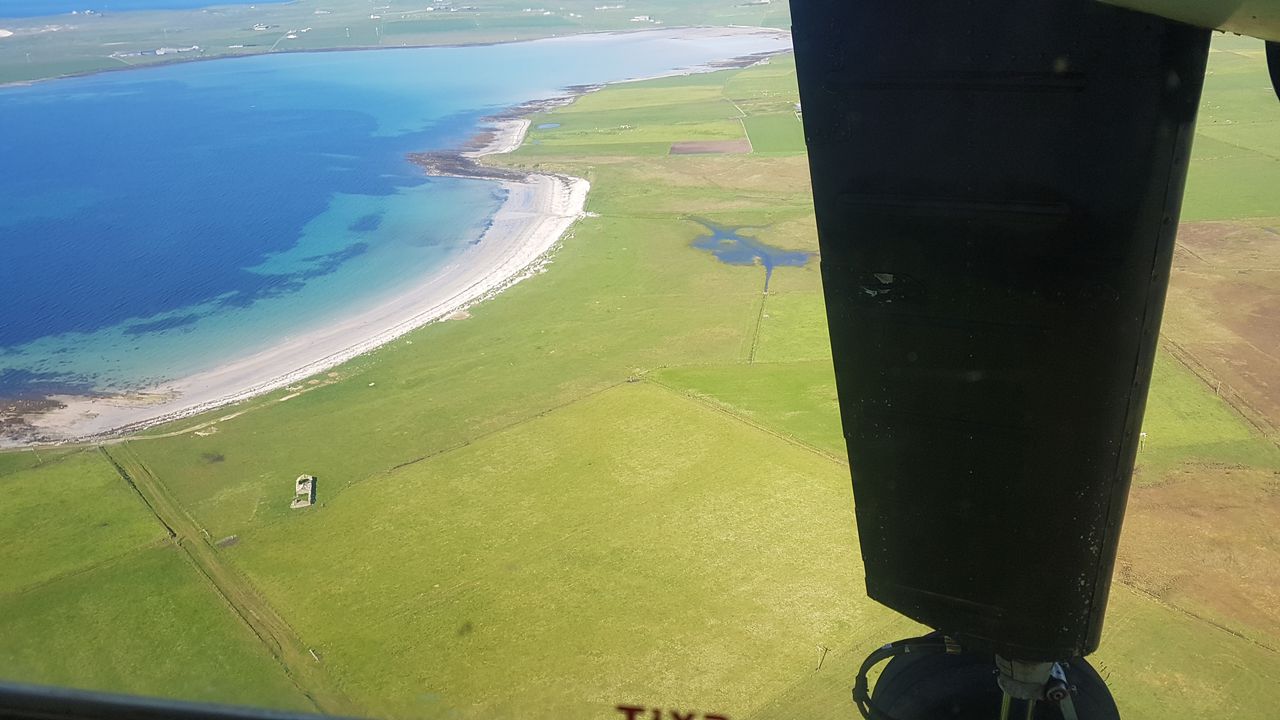 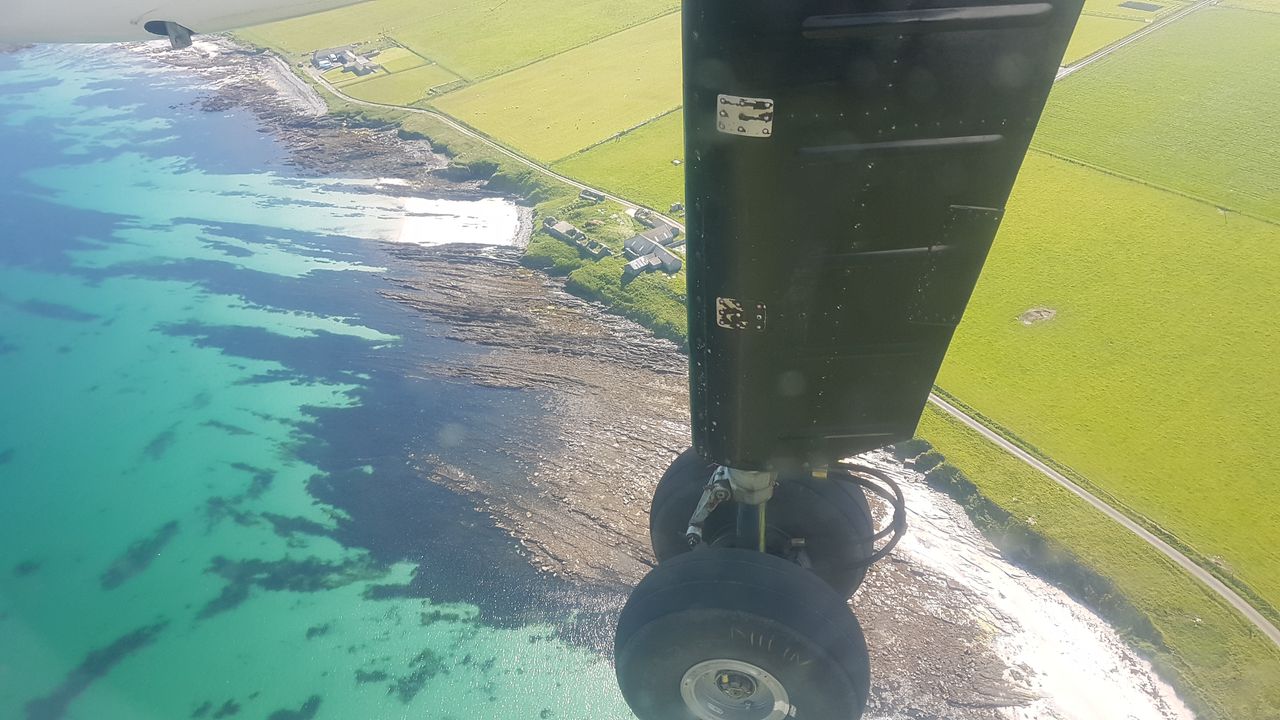 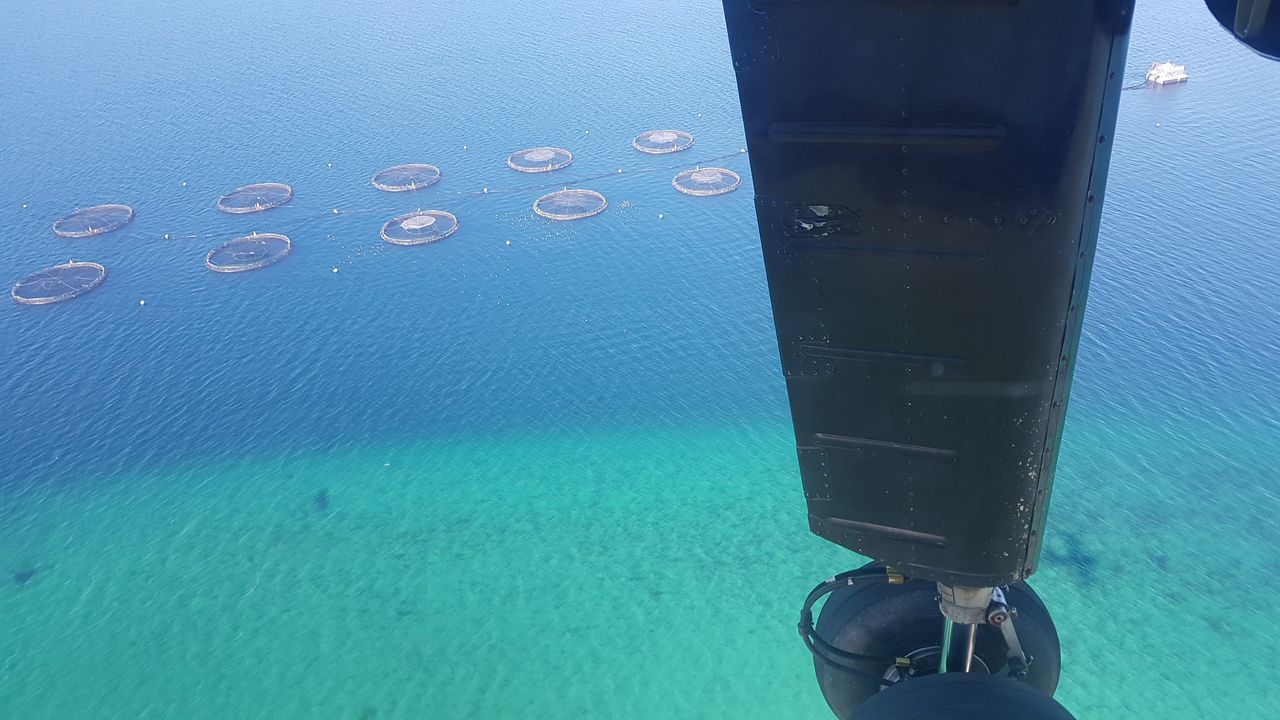 We made a short detour to the Seychelles. No, of course not, but the sea definitely looked tropical here. We landed at Westray Airport at 09.39 after a flight time of 12 minutes. 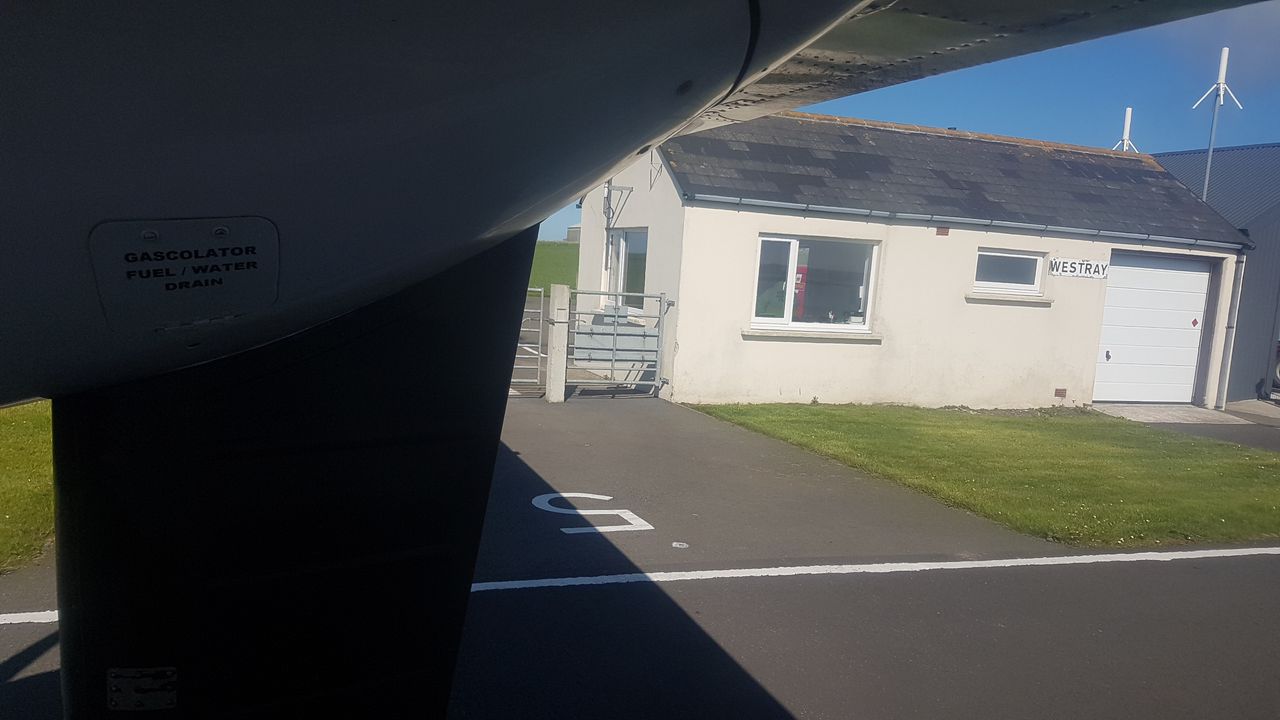