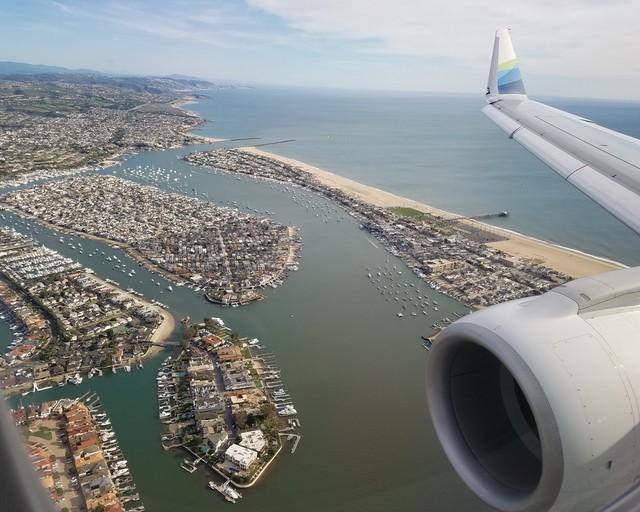 #27 out of 75 Airlines A minimum of 10 flight-reports within the past two years is required to appear in the rankings. 77 reviews

Greetings Flight Report community and welcome aboard the final leg in what was a grand adventure albeit different than envisioned.

The genesis for this trip was actually a trip in July. My pal Mark and I had a spectacular Lufthansa First Class extravaganza that left us in Tokyo with a need for a ride home. Enter Virgin Atlantic and their unbelievable redemption of 110k Flying Club points for a round trip in ANA First Class. In the miles and points world that's the preferred way to get between the US West Coast and Tokyo. The gods of mileage redemption smiled on us and we found two F seats from Tokyo to LAX on the July day we needed. His was HND-LAX and mine NRT-LAX but it was good enough. Flying Club require a round trip redemption so we had to park the return segment somewhere. I scoured Expertflyer and found two First Class seats on LAX-NRT for January 17th, 2019. Darn it all we'd have to plan a second trip around that segment. If we must. So then, you're up to speed on how we and why we presented ourselves at LAX on this date and time.

As for building out a trip around this flight to Tokyo it was easy. Mark loved eating around Singapore on a previous trip so I told him if we ever get a chance to go back to that part of the world I think he would really enjoy Kuala Lumpur, for many of the same reasons he enjoyed Singapore. Amazing cuisines as a result cultural diversity chief among them. I added the KL is a lot like a less polished version of SIN. Also, it's a much less expensive hotel town so we could stay in luxury for a fraction of the price. So it was settled, we'd make our way down to KUL and, since we were in the neighborhood, we'd swing by Hong Kong on the way home. Mark hasn't had the pleasure of visiting HK either.

In the 6 months between trips I planed and schemed and fleshed out all of the segments on points (some his but mostly mine) so that we would travel in relative comfort. We would rely on Delta to non-rev home on the last T-Pac segment, which likely meant economy class for Mark. Can't win them all.

Spoiler alert: Things didn't go to plan for either of us. The first installment contains the unfortunate circumstances.

A good brisk walk from the low A gates to the central immigration facility felt refreshing after the flight. Global Entry made for a brief visit, bearly breaking stride with no wait at customs.

The last time I used this flight it departed from the International Terminal A but it appears that Alaska have done well to consolidate their operations to terminal 2 as the merger with Virgin America becomes more mature. The walk down to Terminal 2 is pleasant and can be done in doors if there is inclement weather.

The Draw back of the move to T2 is lounge access. The Air France Lounge in International Terminal A is a Prioroty Pass option, there is no participating lounge in T2. On a whim i popped into the Admirals Club, knowing they have a relationship with Alaska, to see if there is any condition where coming off a OW flight on to an Alaska flight might have access but the answer is as expected, there is not.

With only about 30 minutes until boarding I found a seat at the gate and waited for boarding to commence which happened on time.

One of the first several to board the experience was odd right from the start. The flight attendant was in the small galley and made no effort to greet the passengers. I found my seat and noted the lack of water bottle. Skywest flights that are operated on behalf of Delta are always provisioned with one. 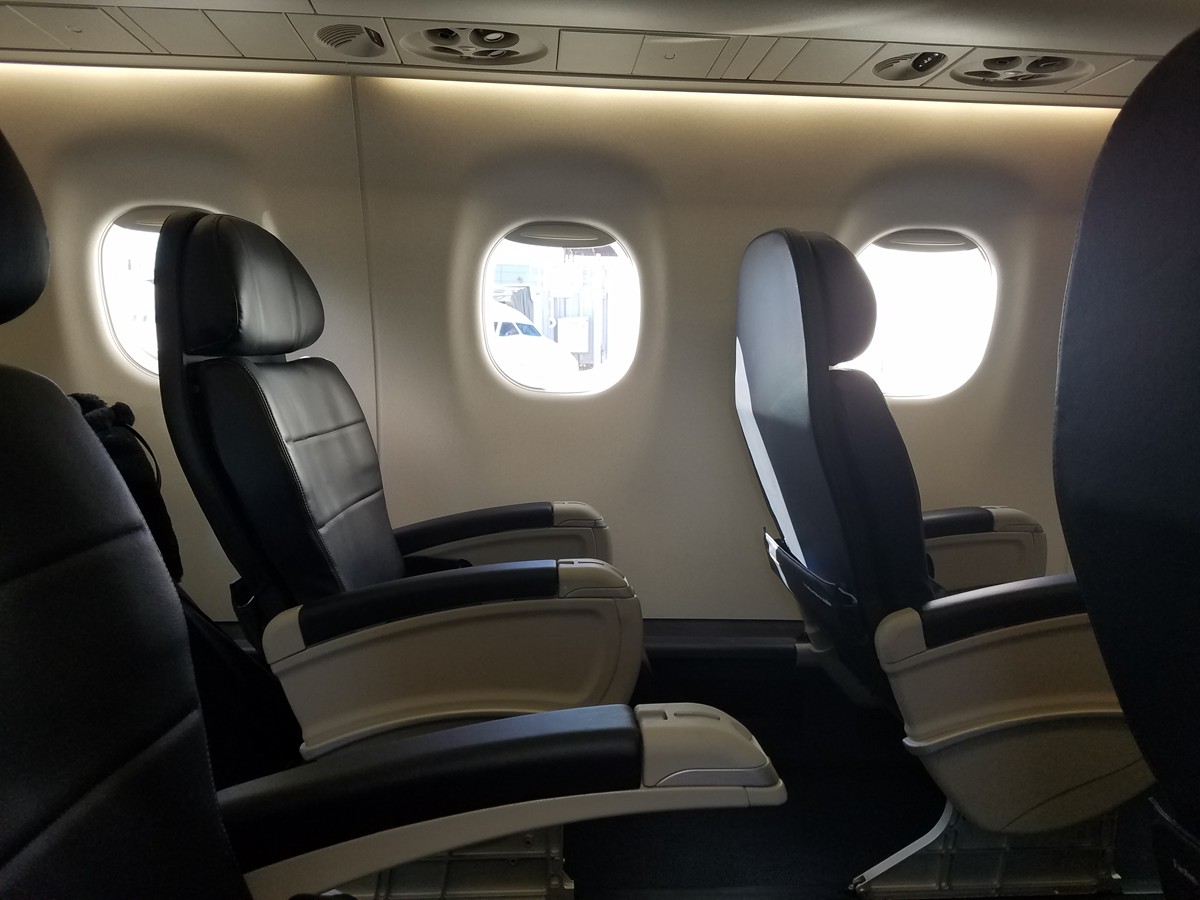 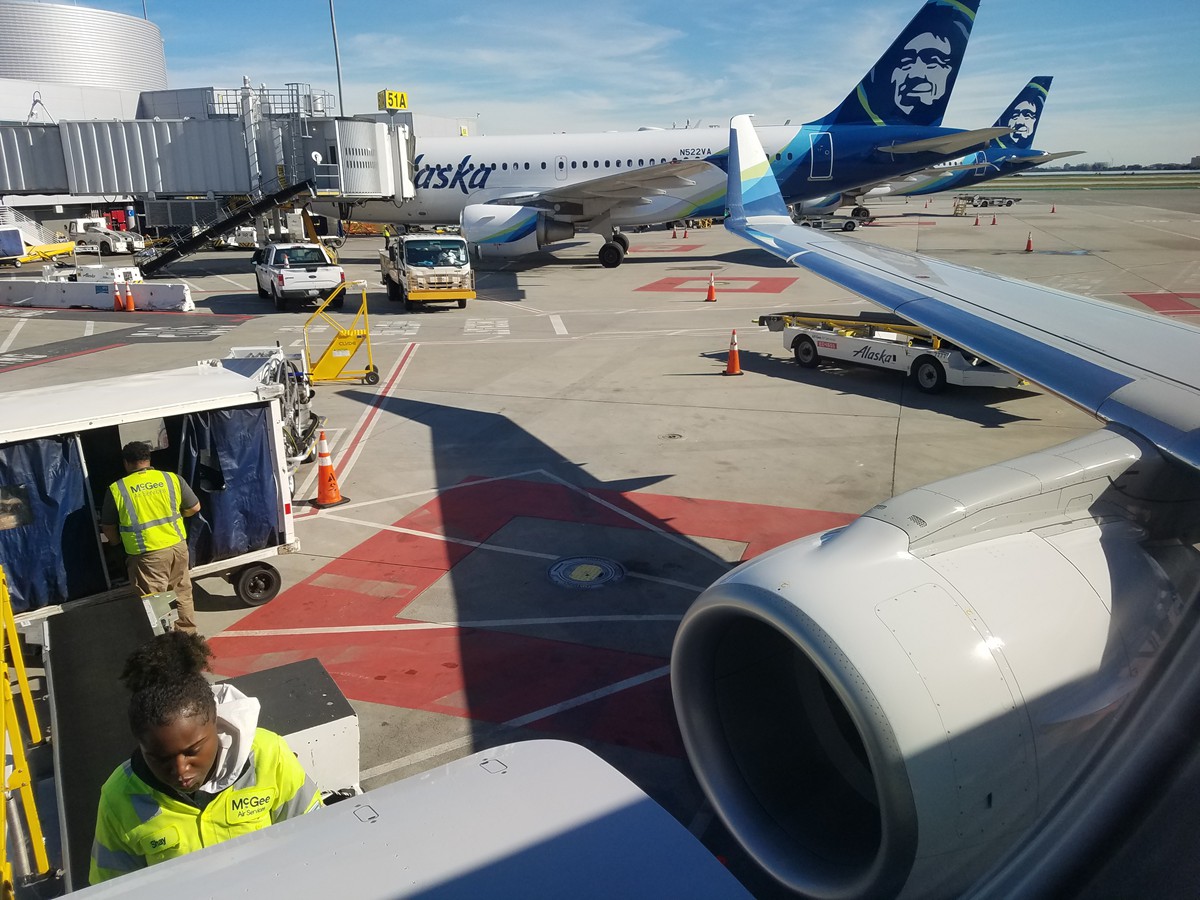 When the flight attendant did face the passengers I also noticed he wasn't wearing a name tag or wings. Through the announcements I learned his name was Edgar. There was no offer of a pre departure beverage even though we were on time and the flight was less than capacity in either cabin. Edgar did manage to pass out water bottles with no greeting, he just extended it to each passenger and you could take it if you wanted it. He was also chewing gum, a pet peeve of mine for those in forward facing customer service roles. So it would be one of "those" type of flights. Flying on several foreign flags in the past week I had forgotten that this is a "feature" of being home and flying with a US carrier.

Our push back was on time and began our taxi to 1L. Some traffic to spot along the way. 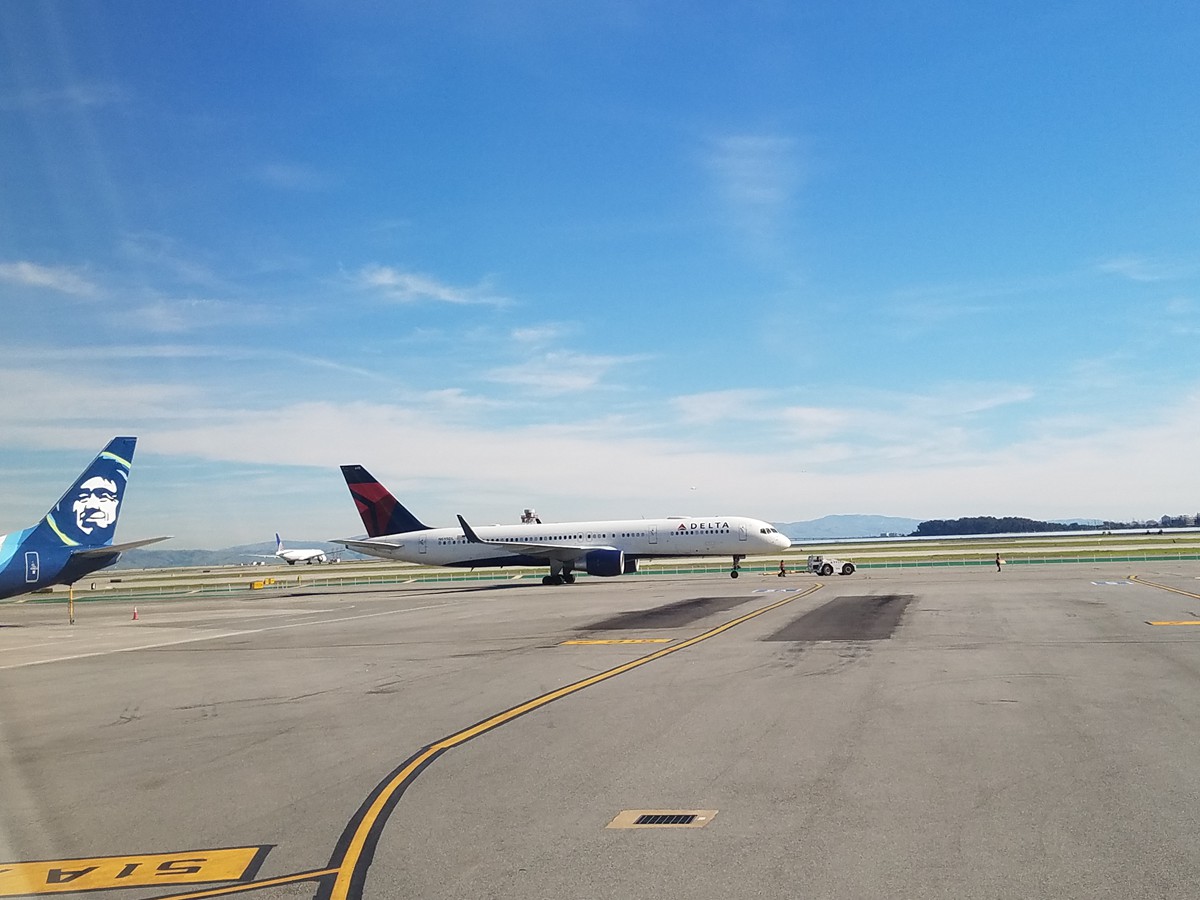 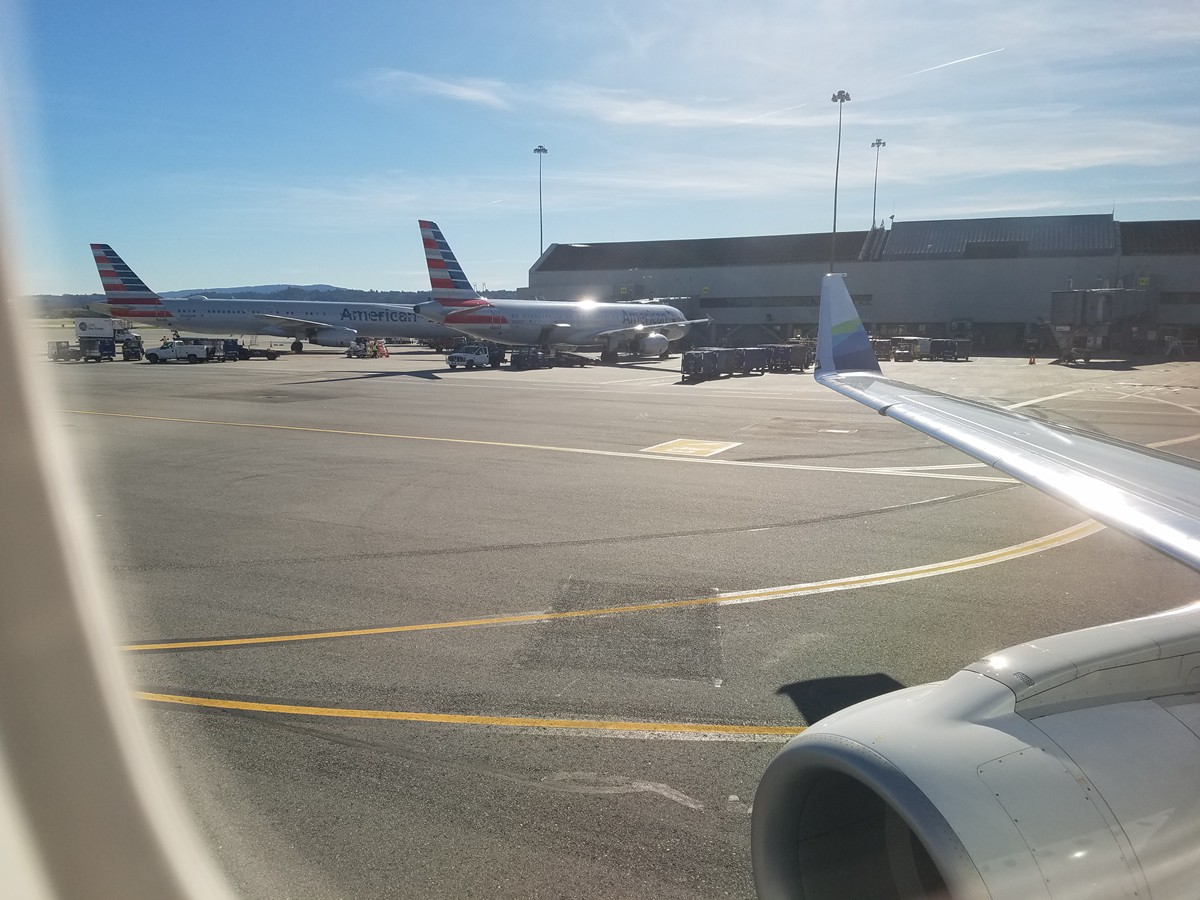 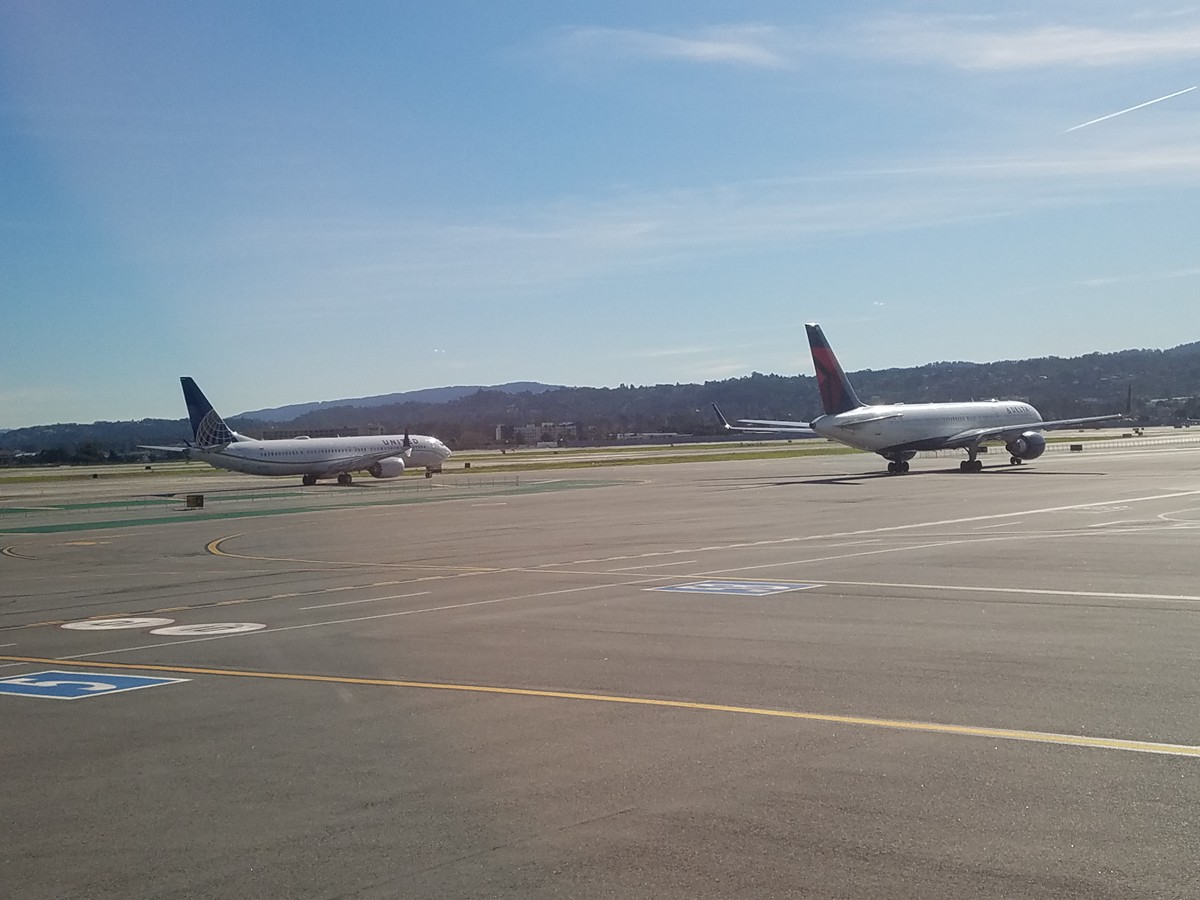 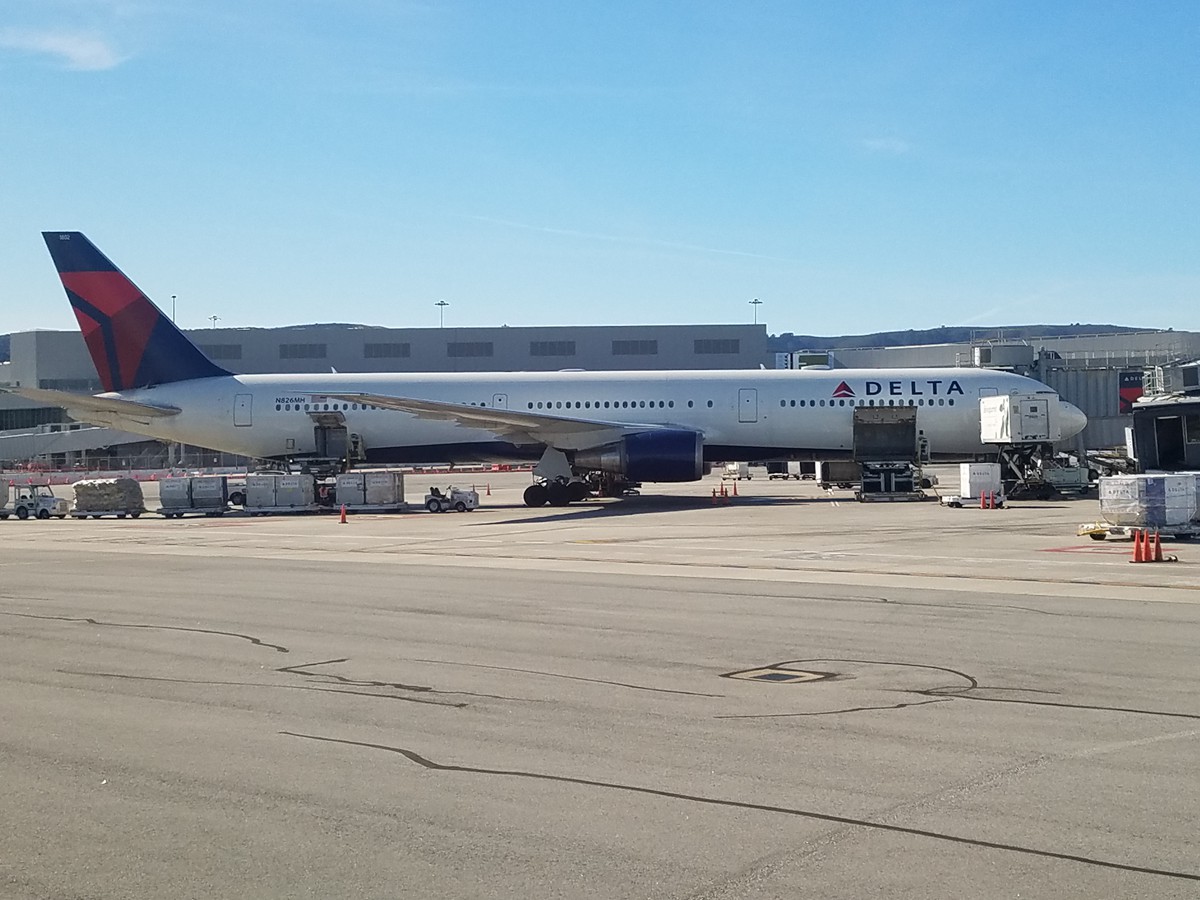 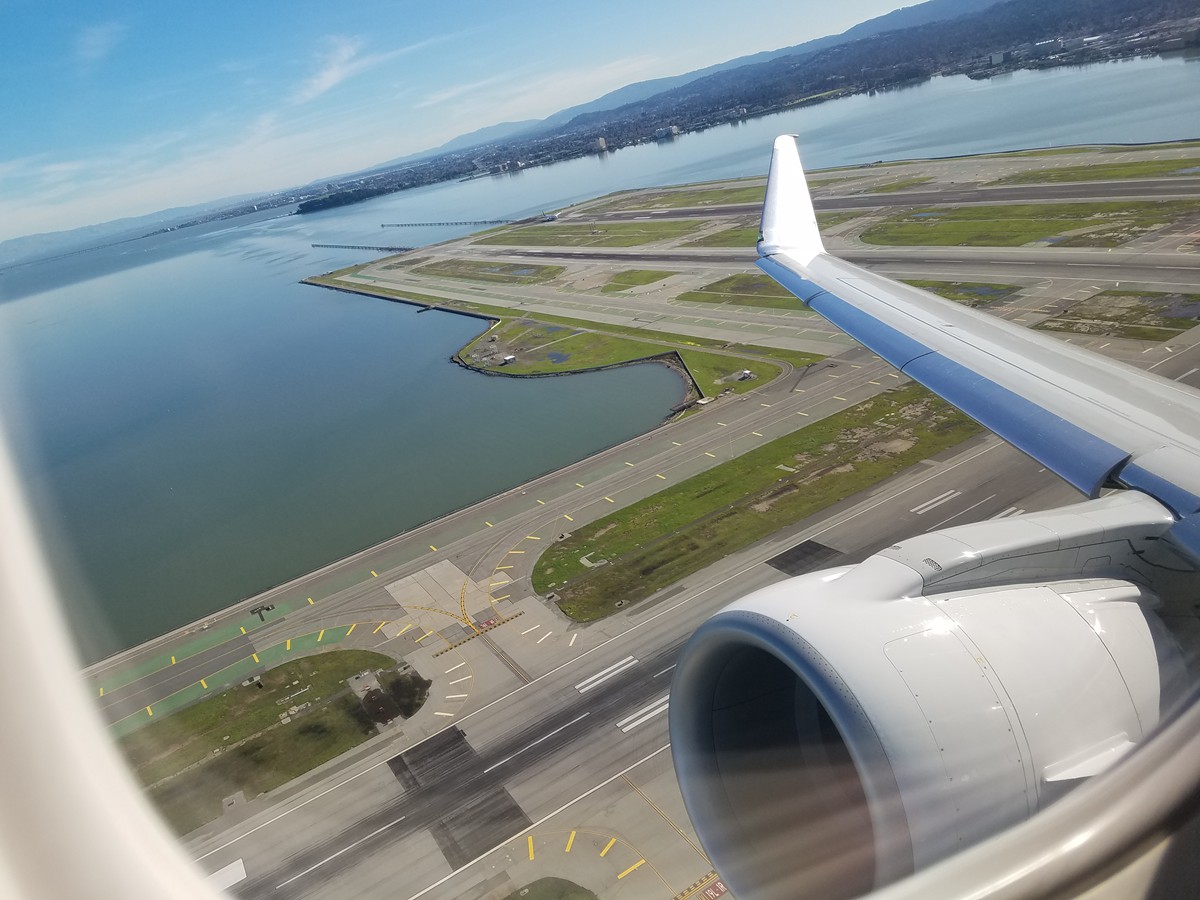 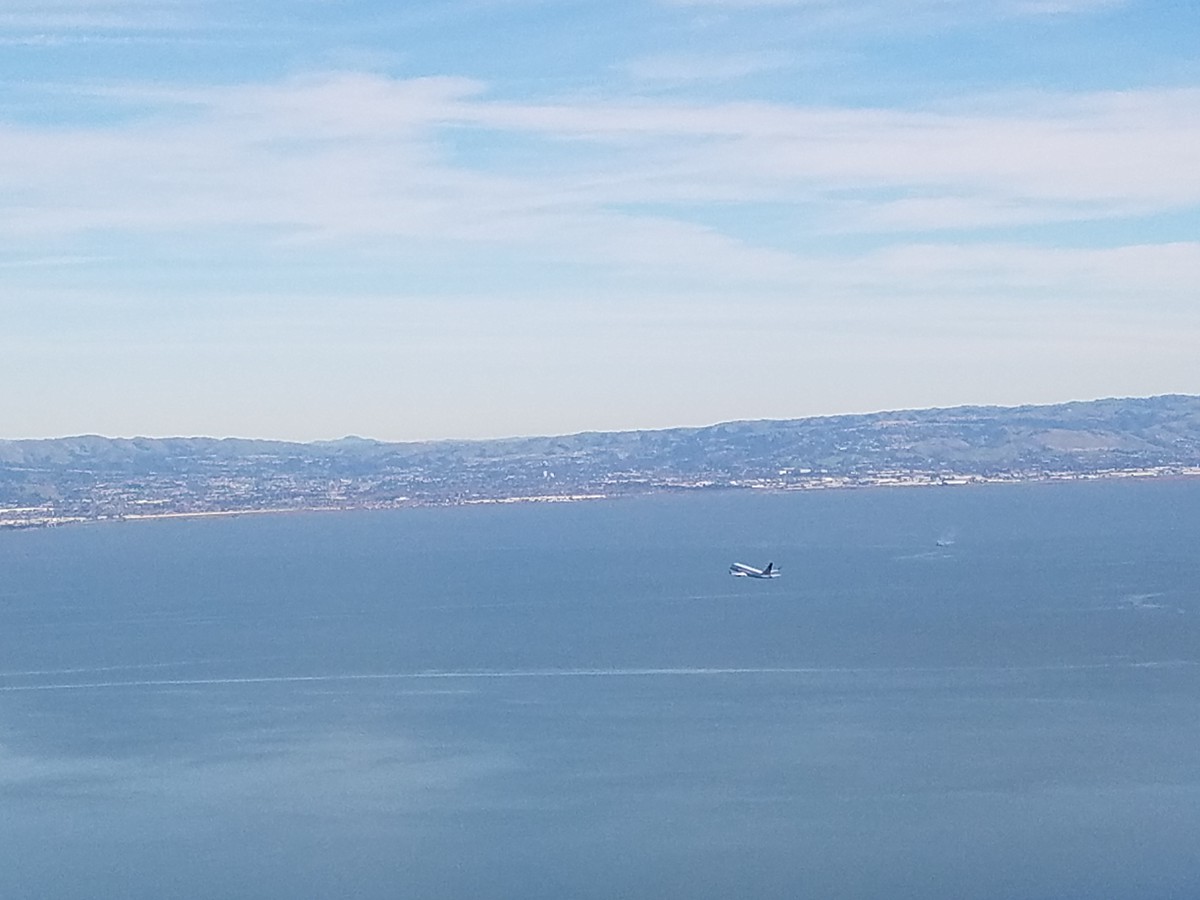 Spectacular day for flying down the coast of California. Turning south over Moss Beach. 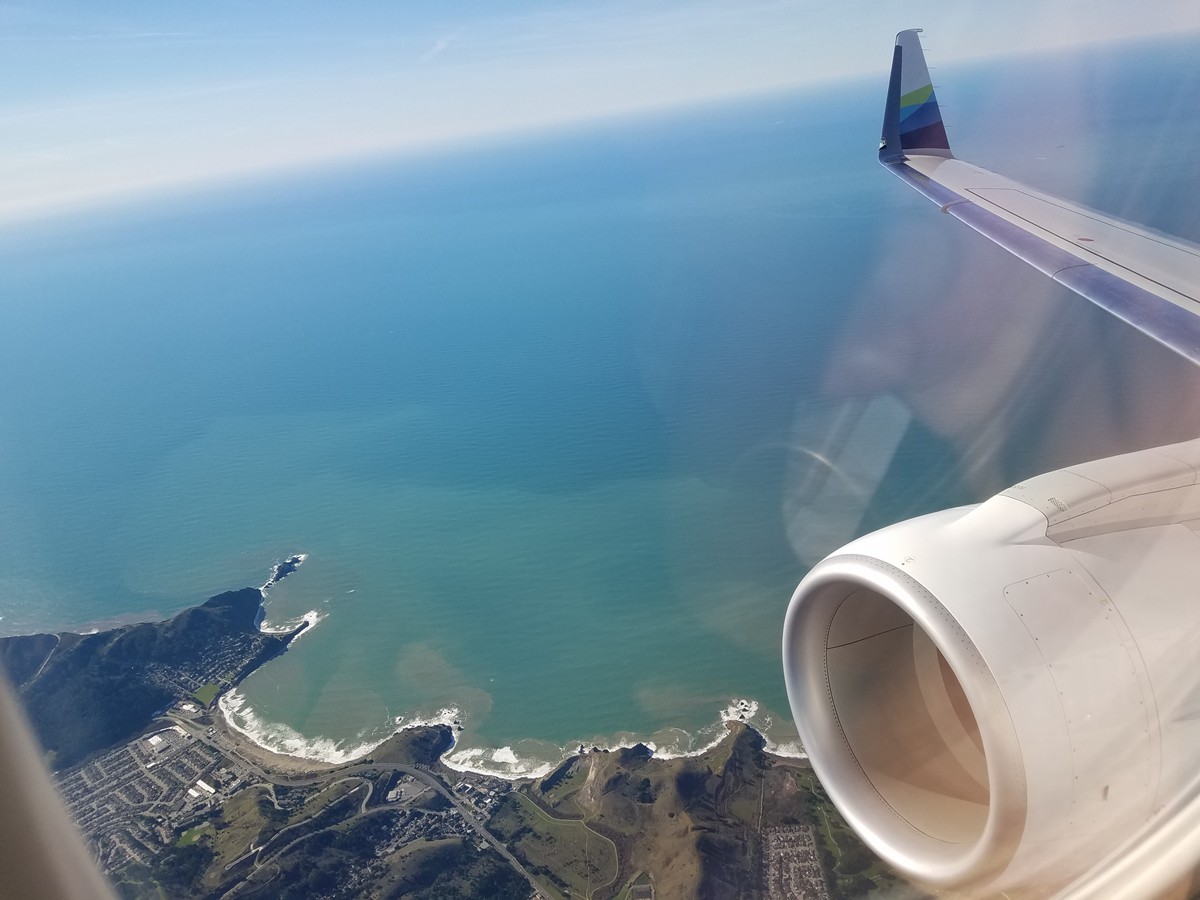 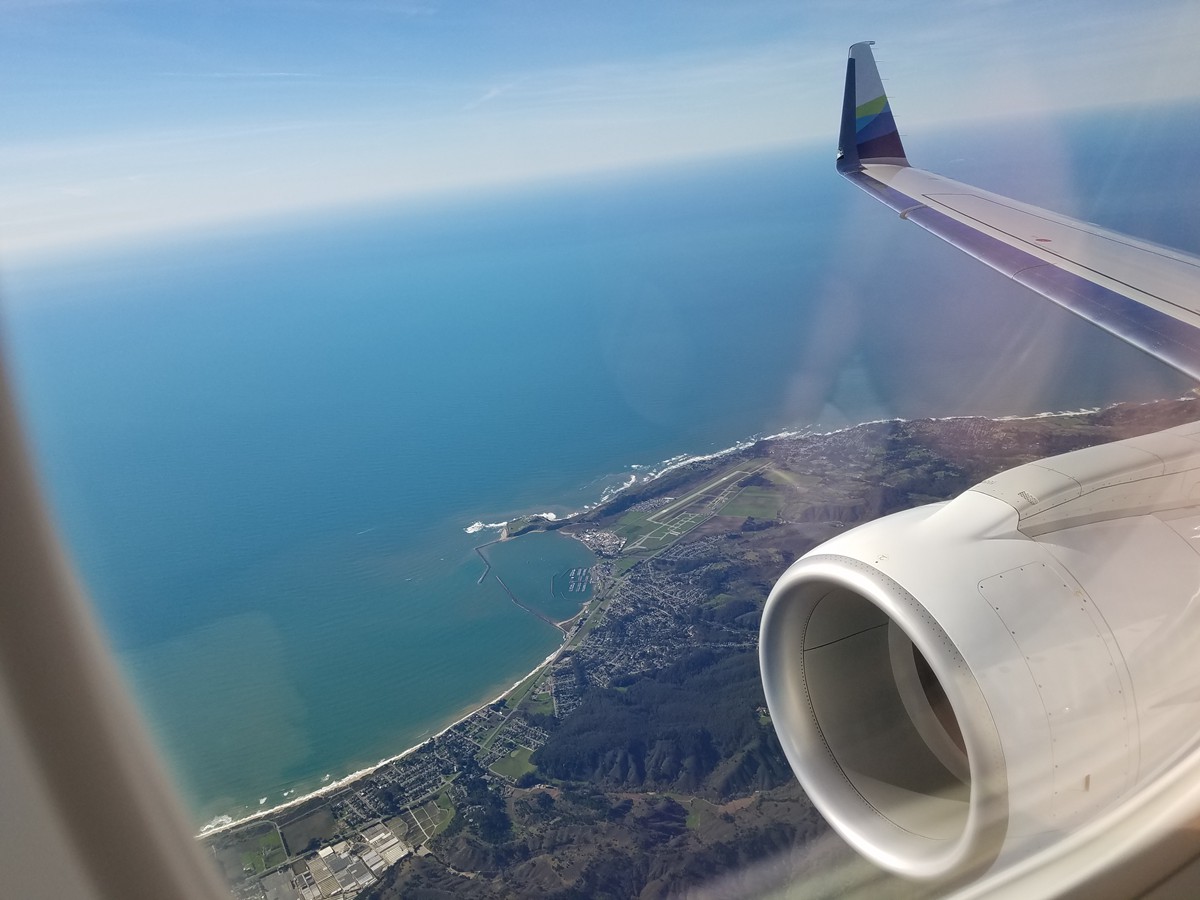 Edgar started service relatively promptly with a drink offer and I requested a G & T. There was no one in 3C so I was able to utilize the entire center table and pull out tray. 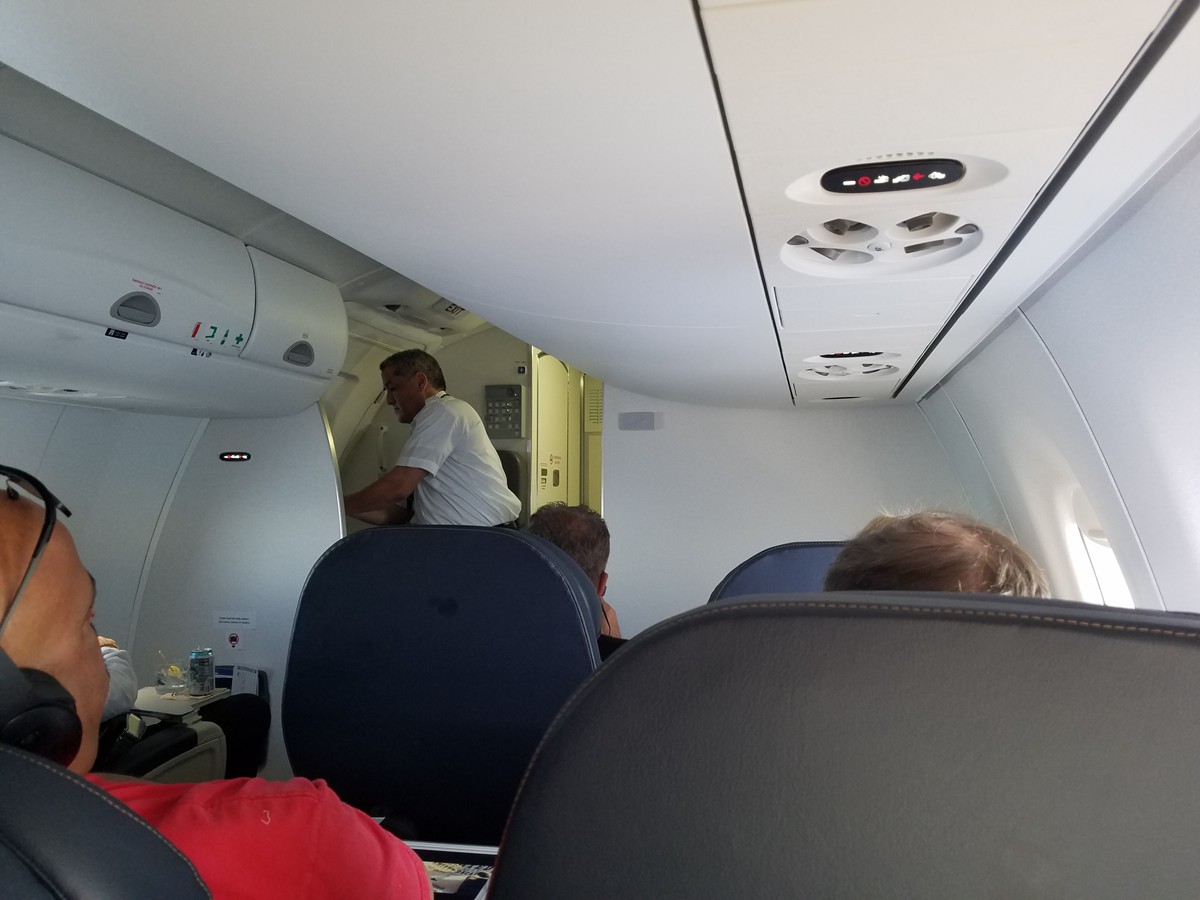 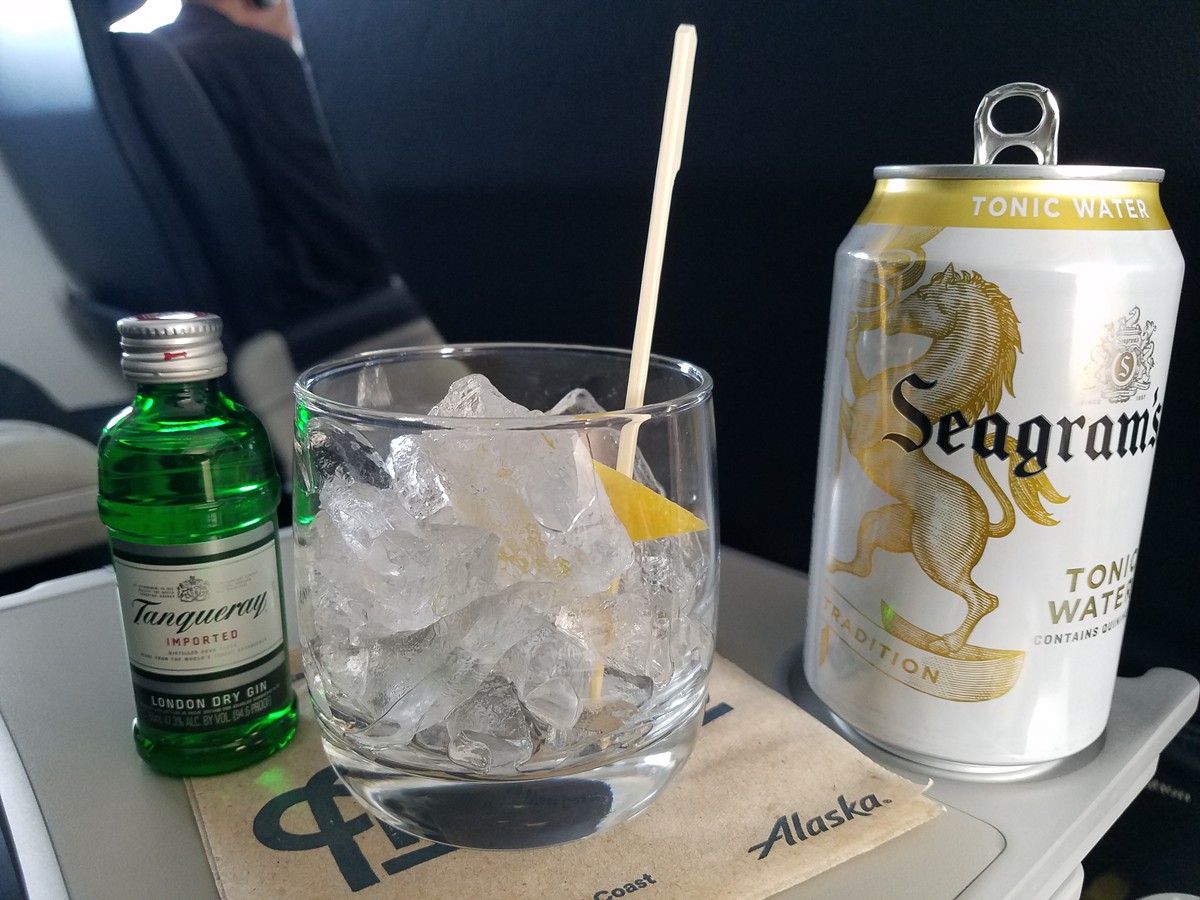 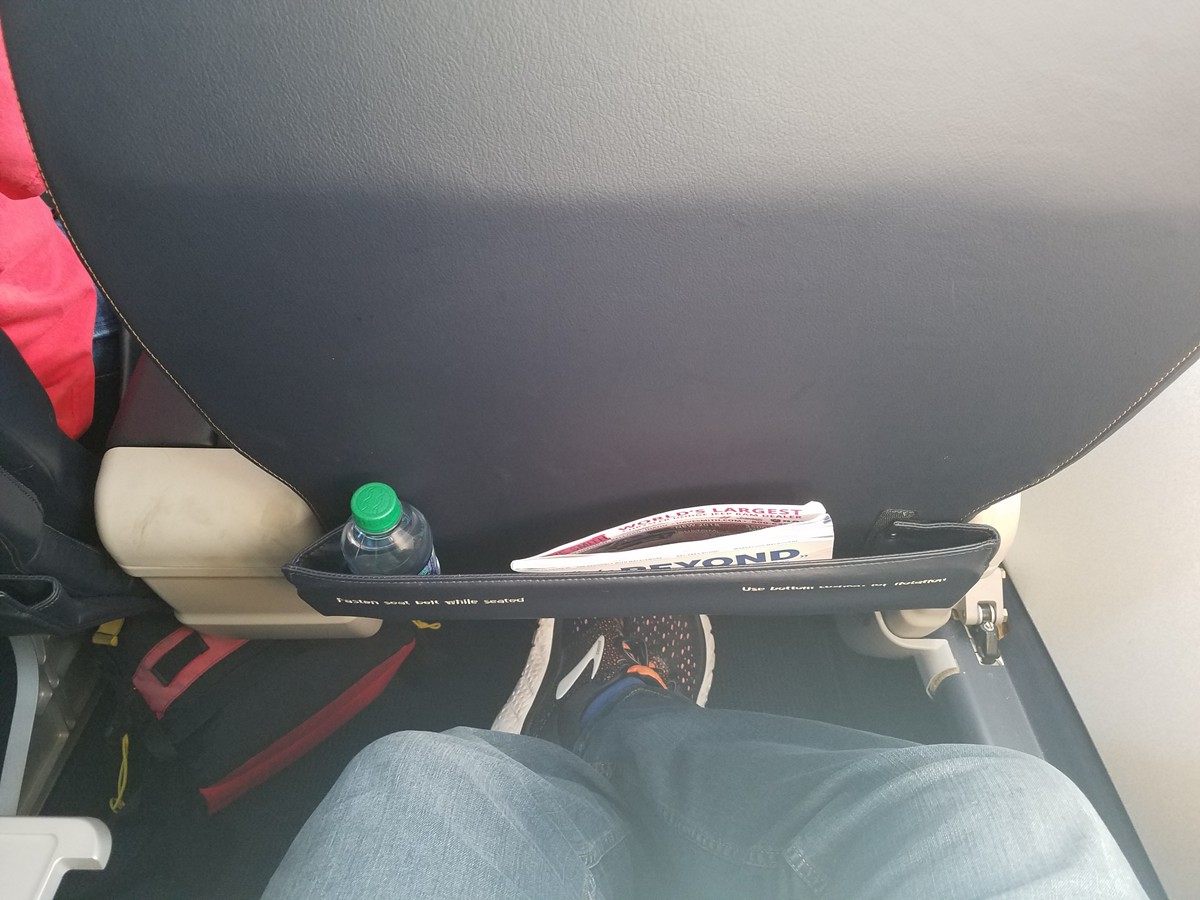 Edgar passed the snack basket next. 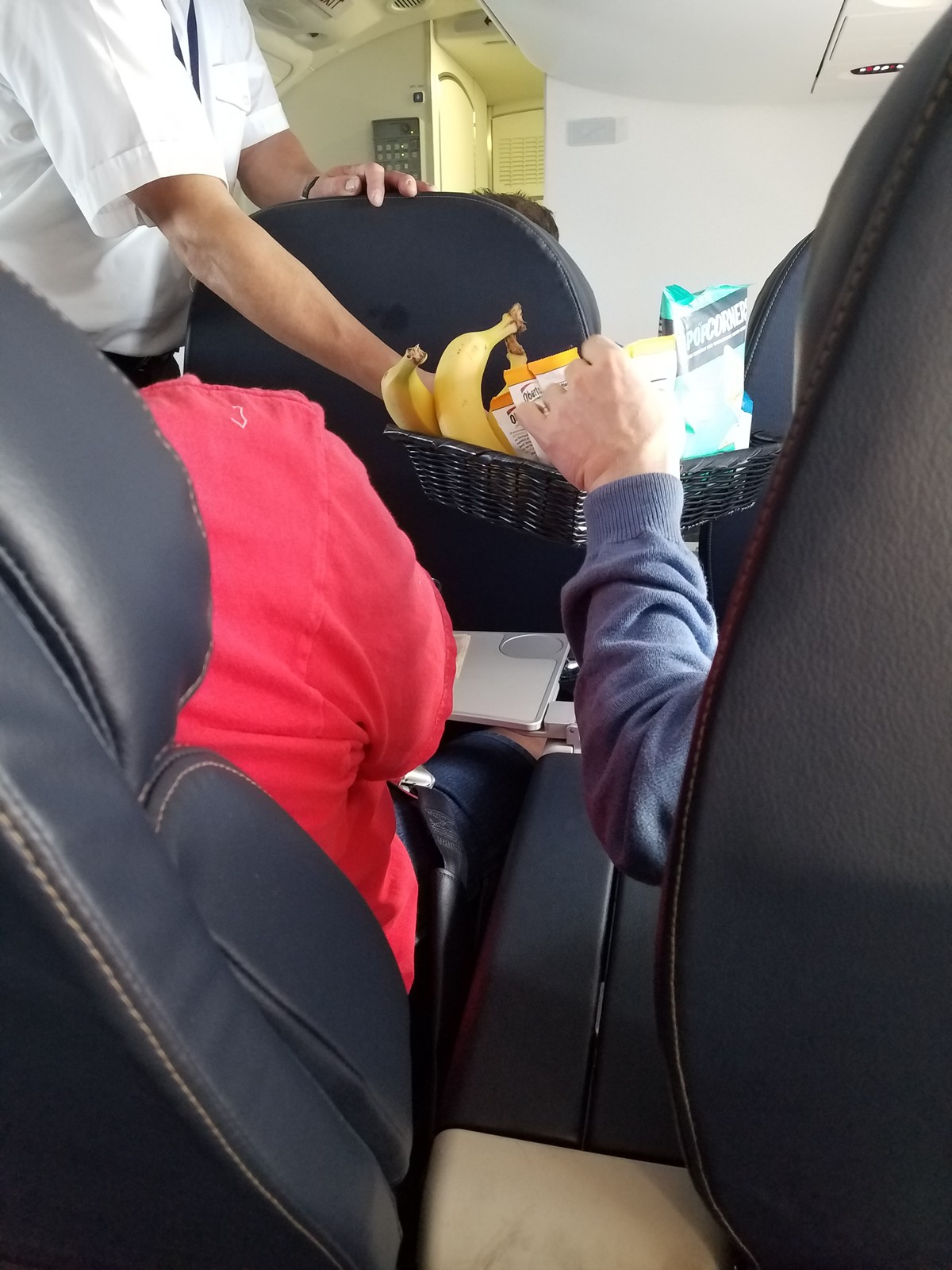 Back over the coast to setup for an unusual approach to SNA. 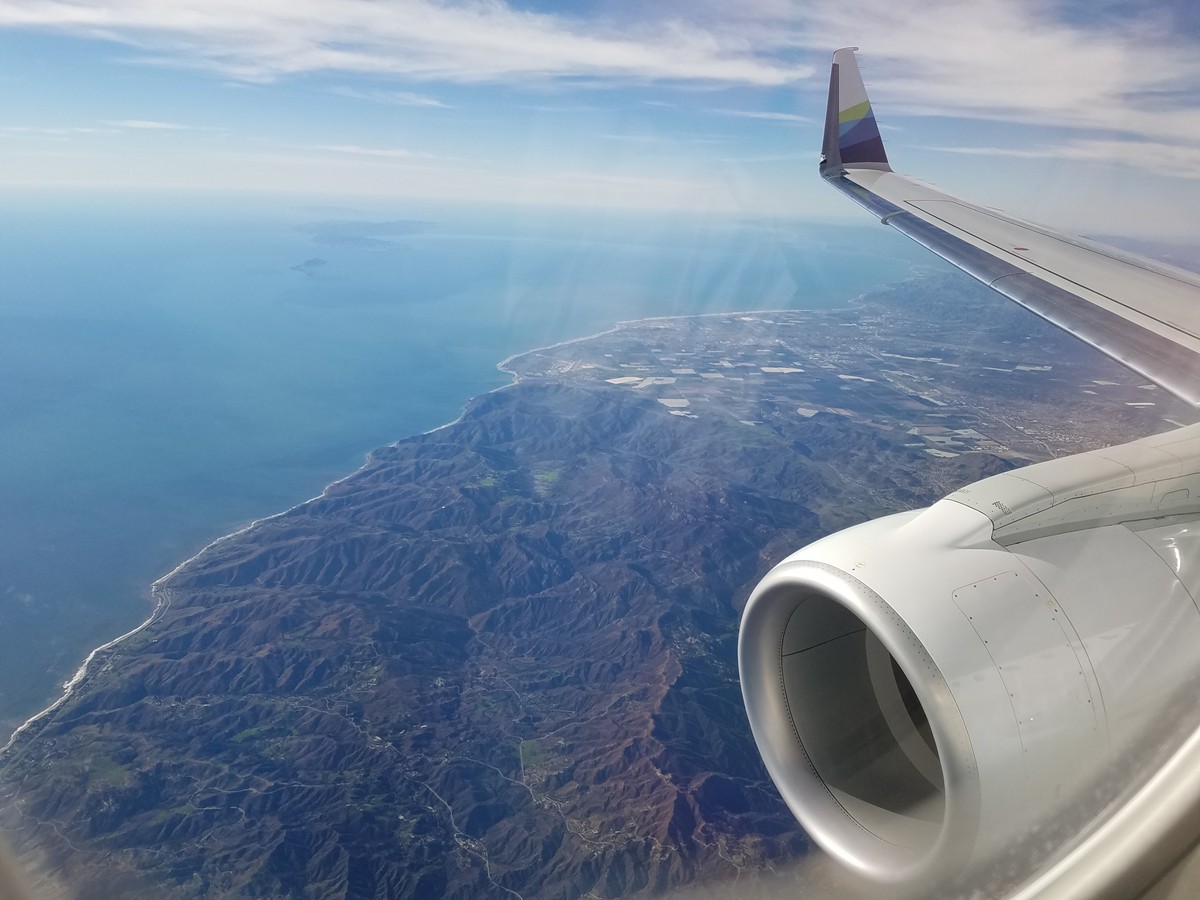 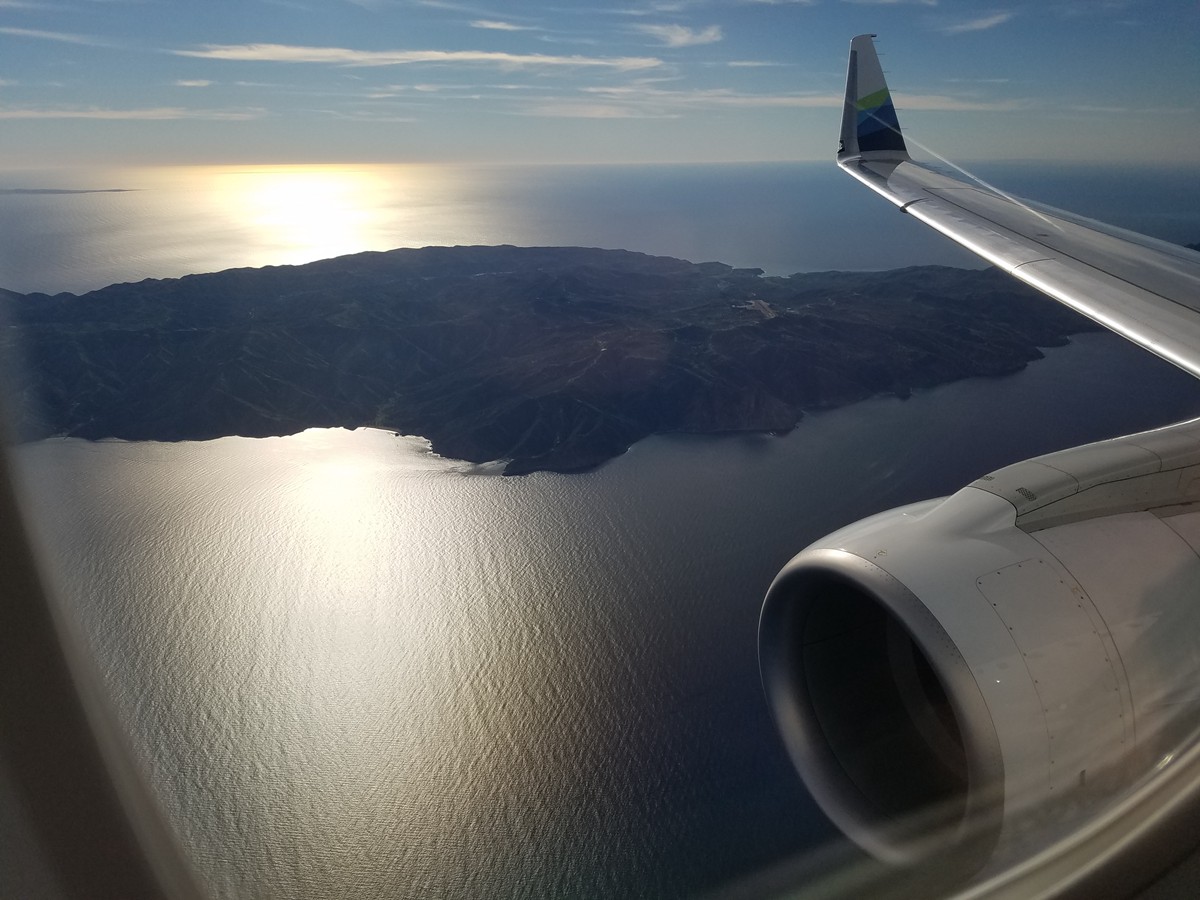 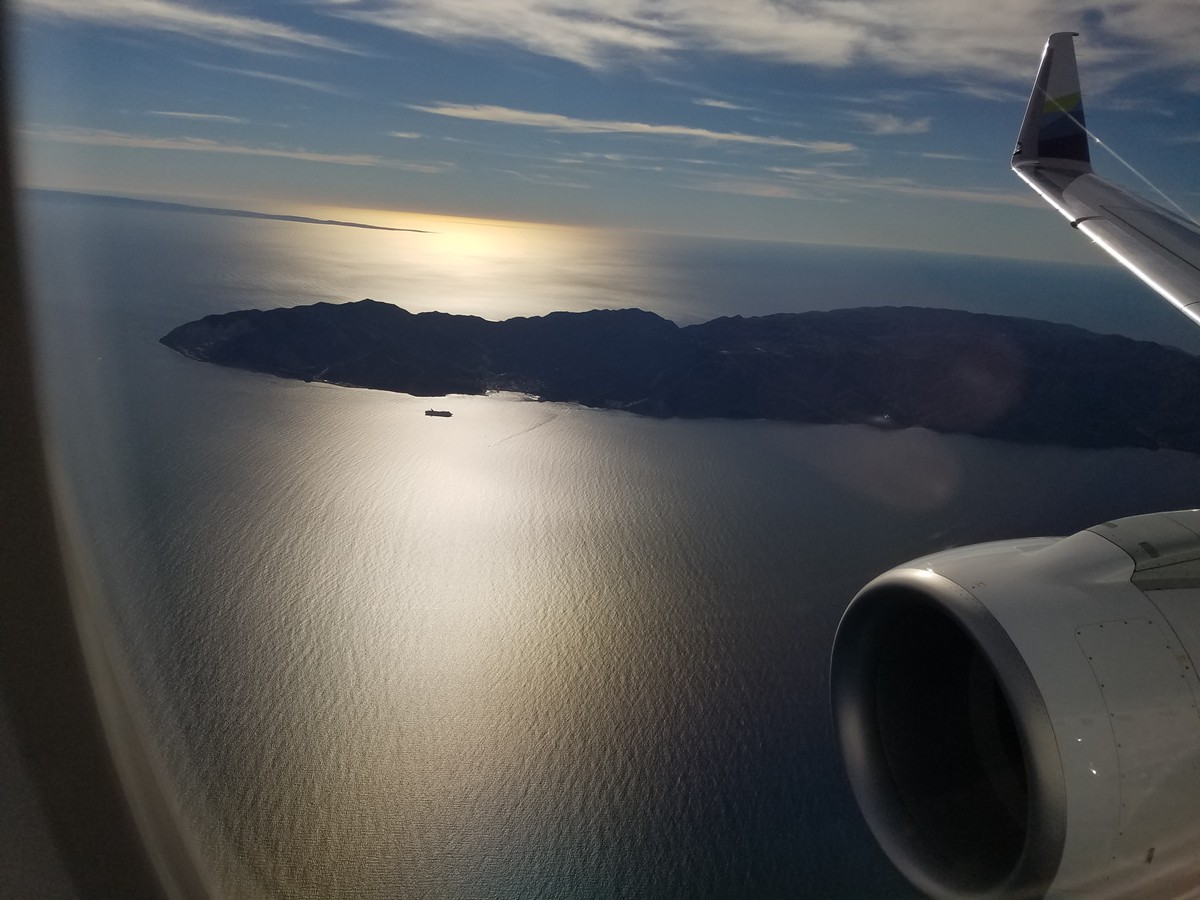 The prevailing wind direction in Coastal Orange County, and really all of coastal California is and on shore flow. This winter day the Santa Ana winds were in effect causing an offshore flow so the airport was turned around we approached from the west over Newport Beach and Balboa Peninsula. 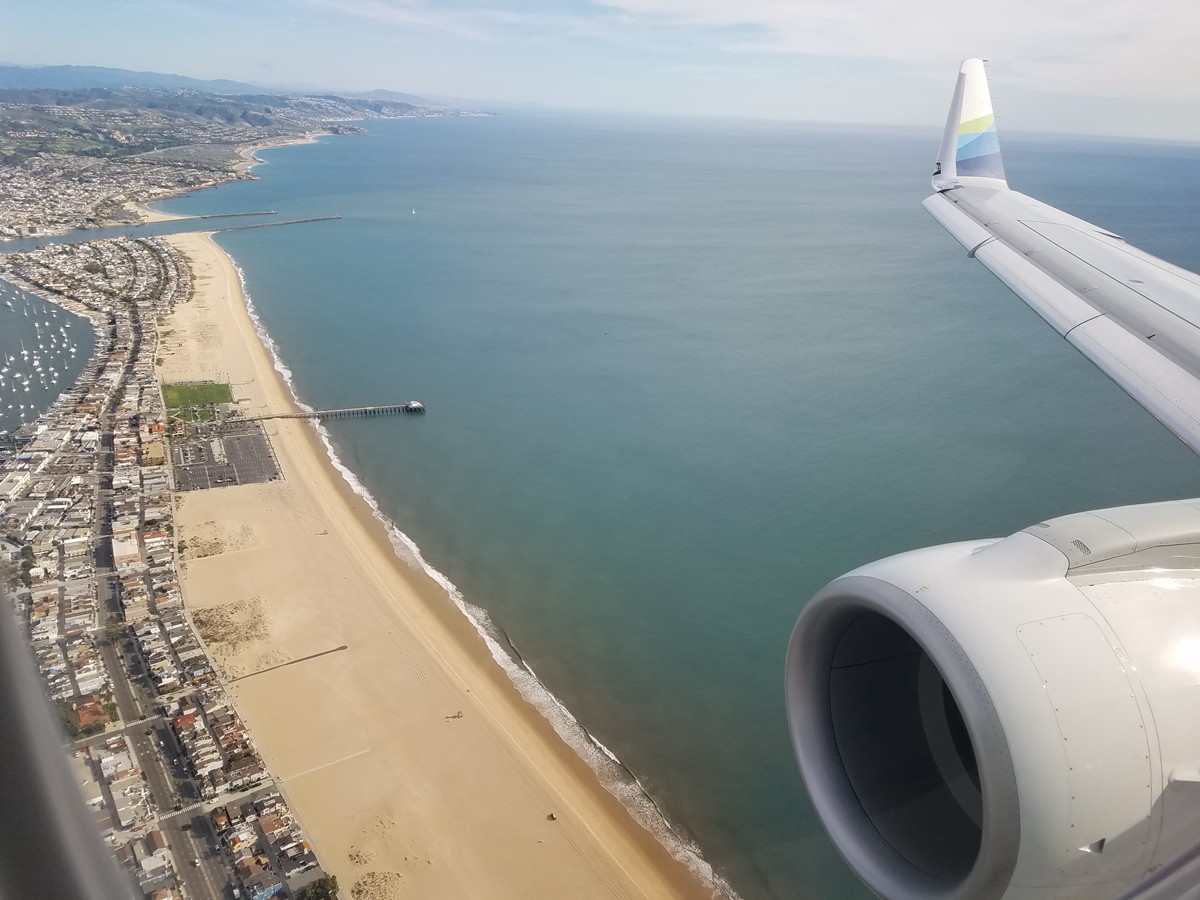 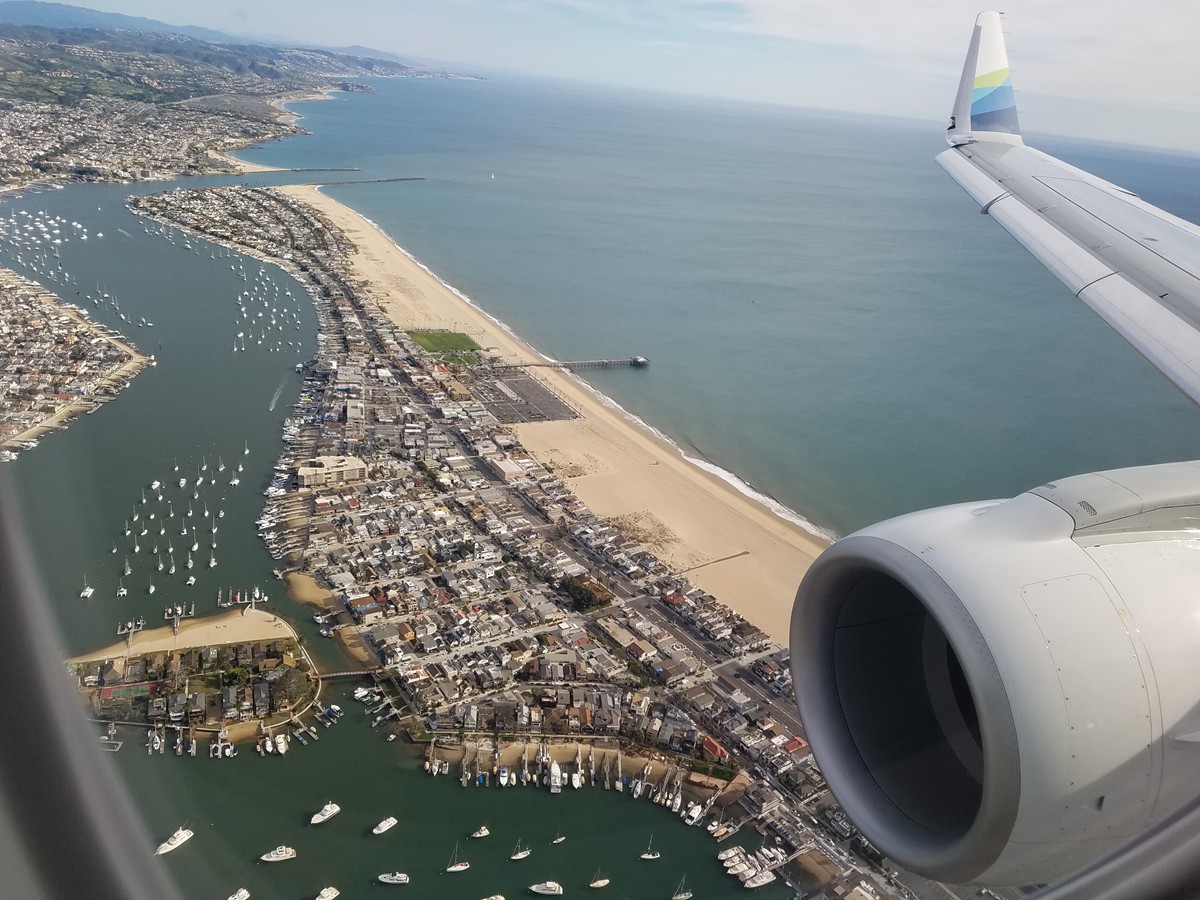 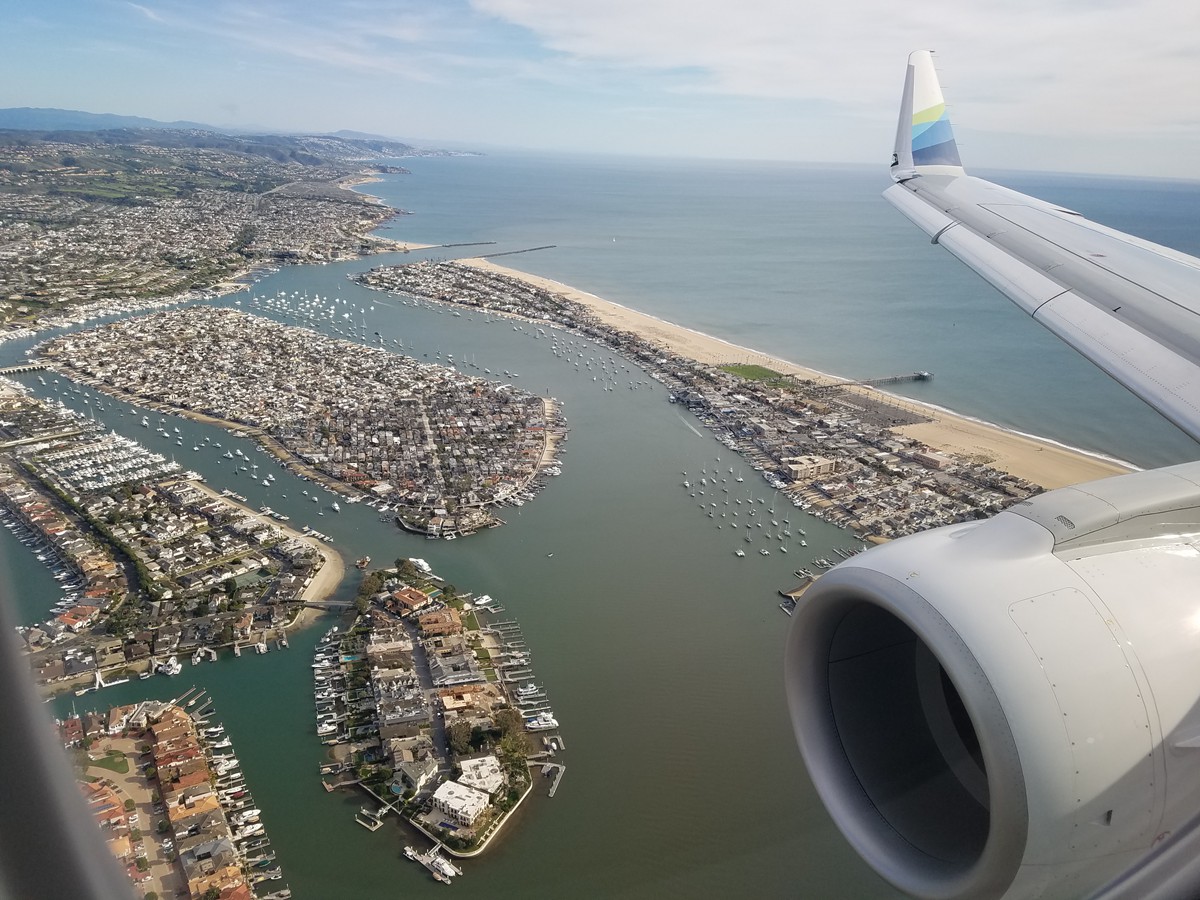 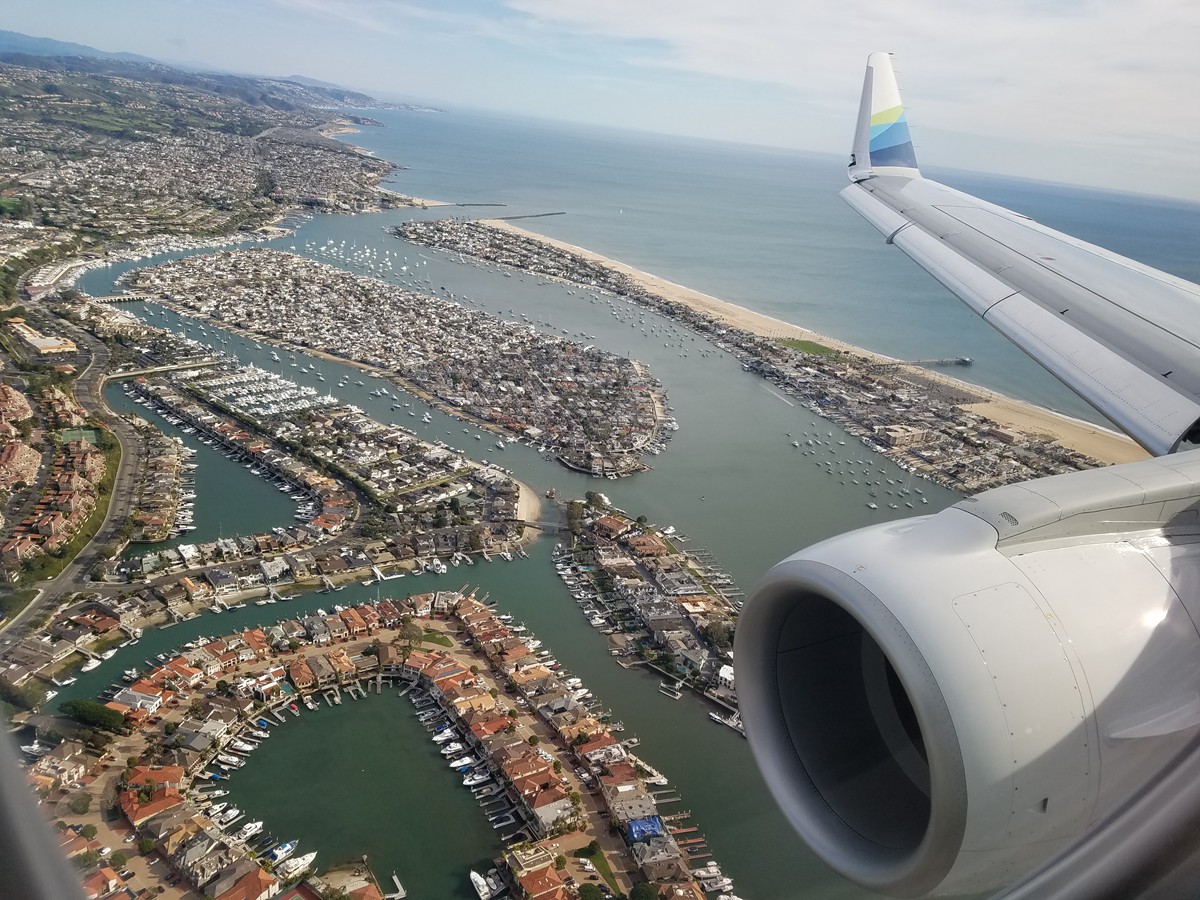 Upper Newport Bay also known as the "back bay." 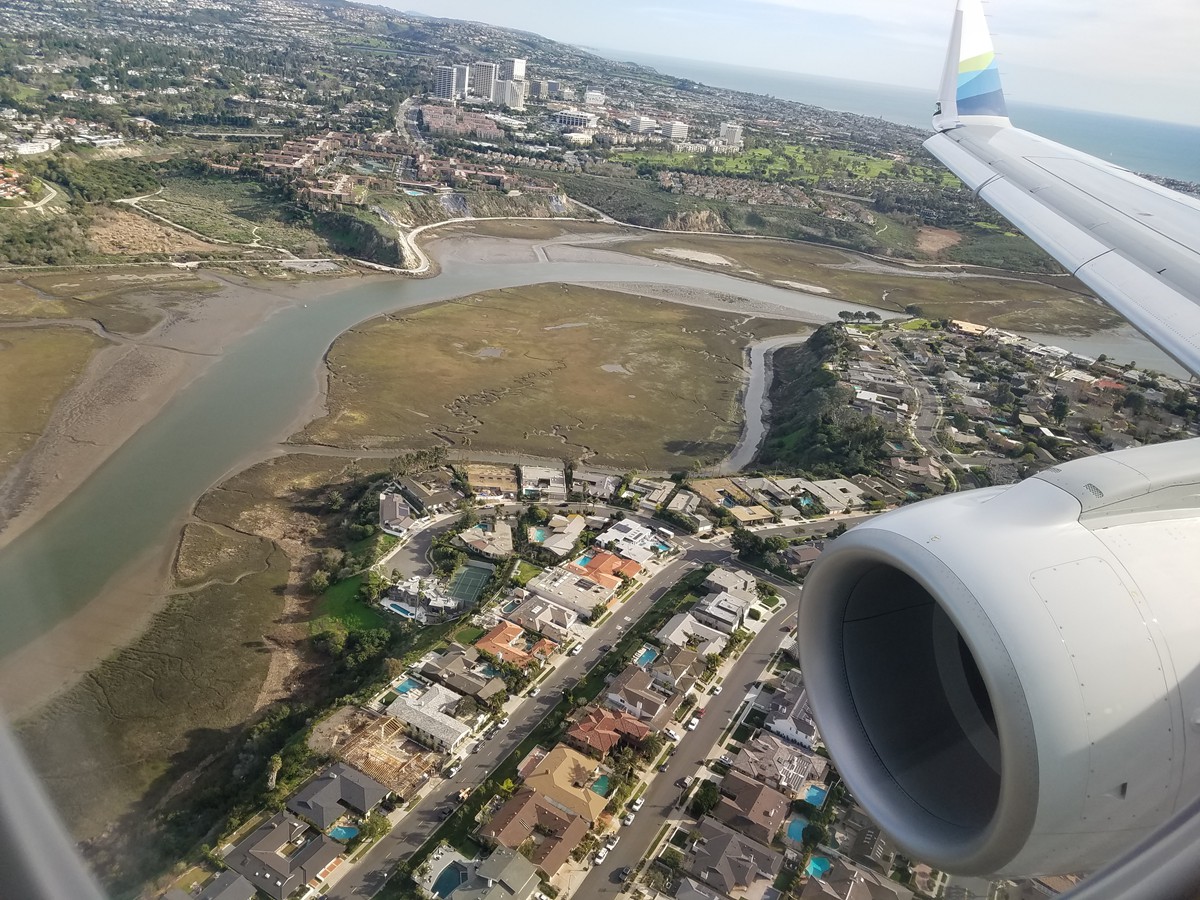 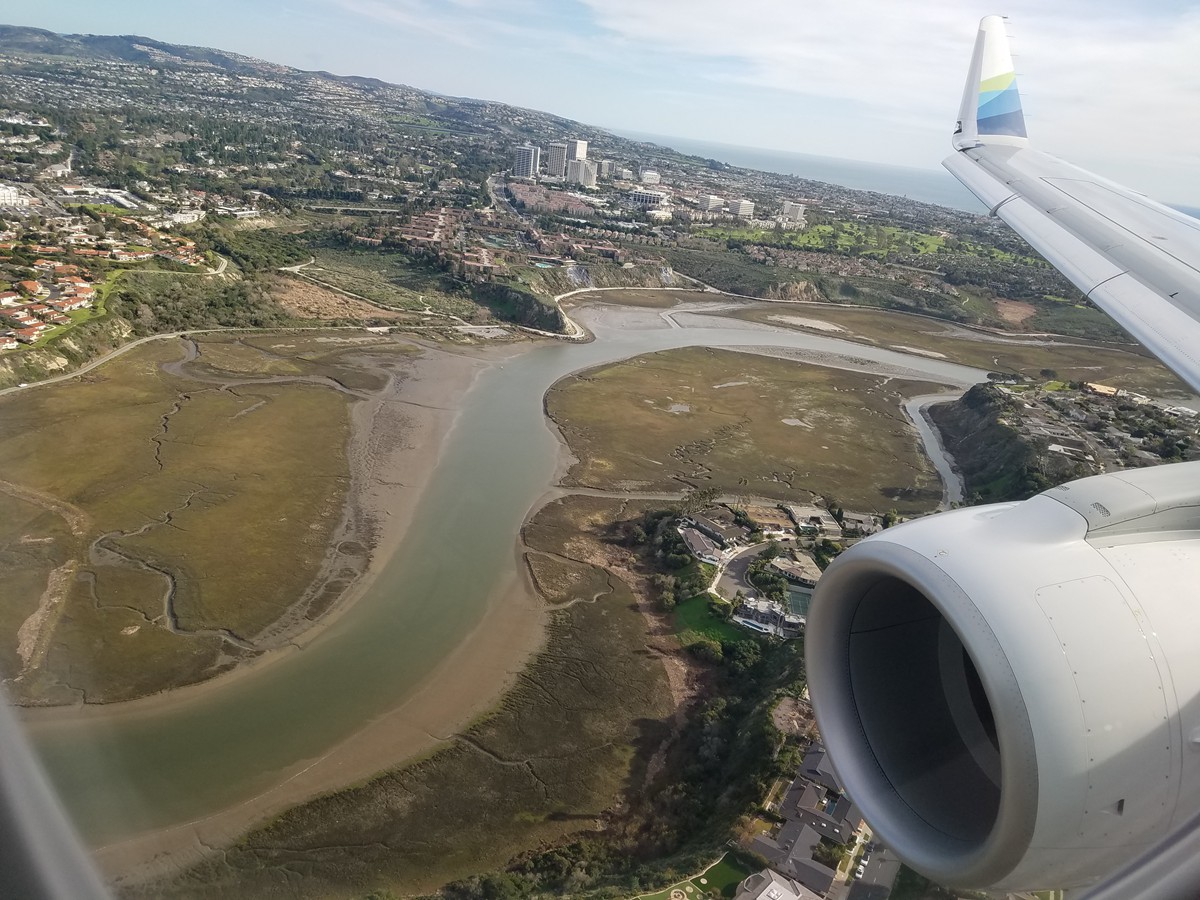 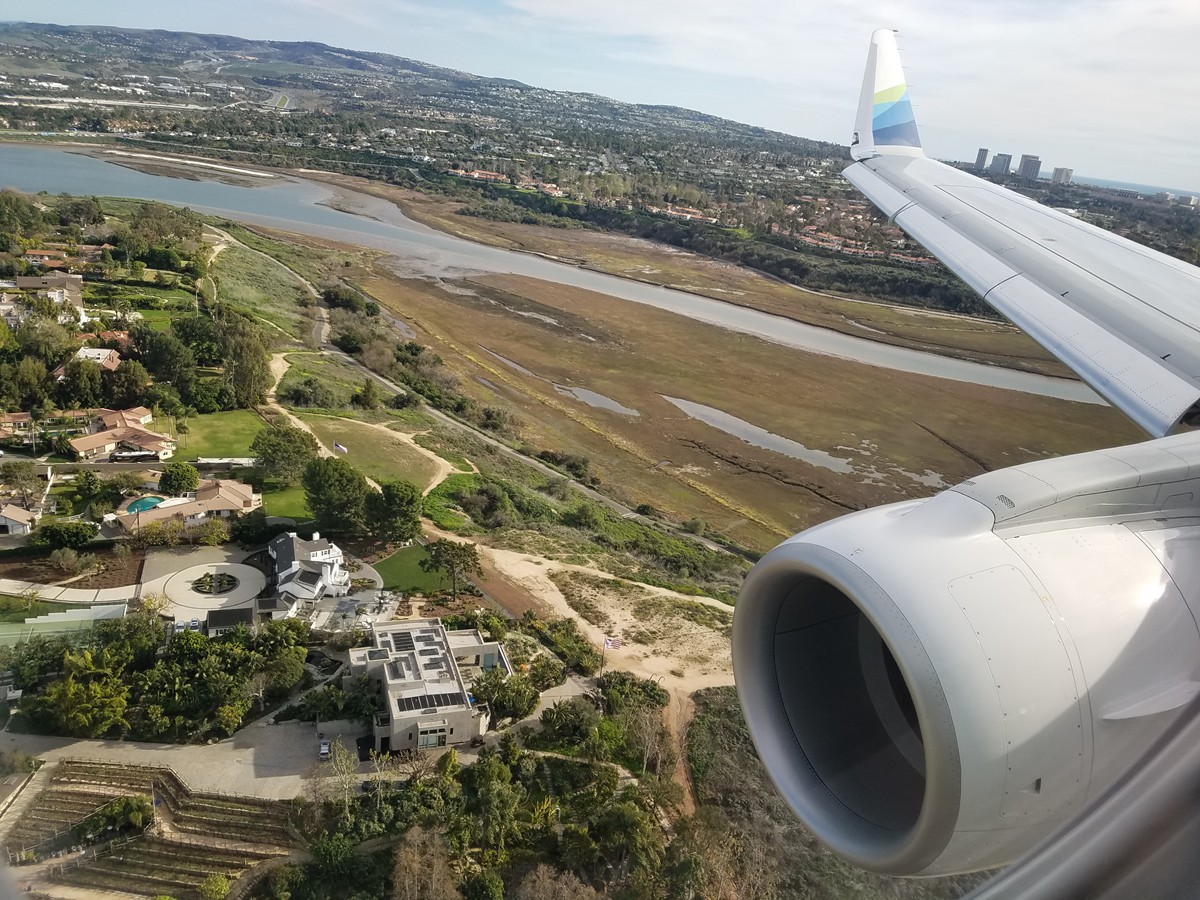 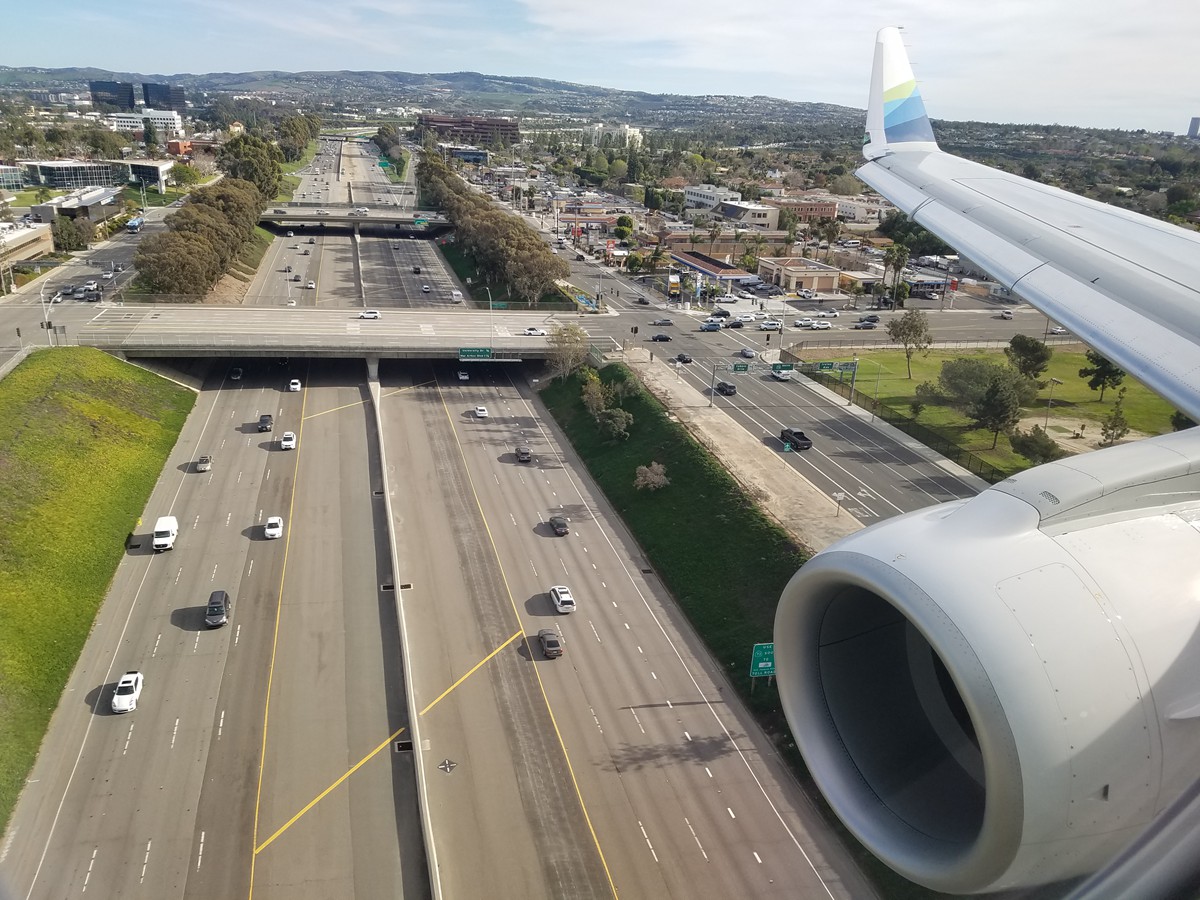 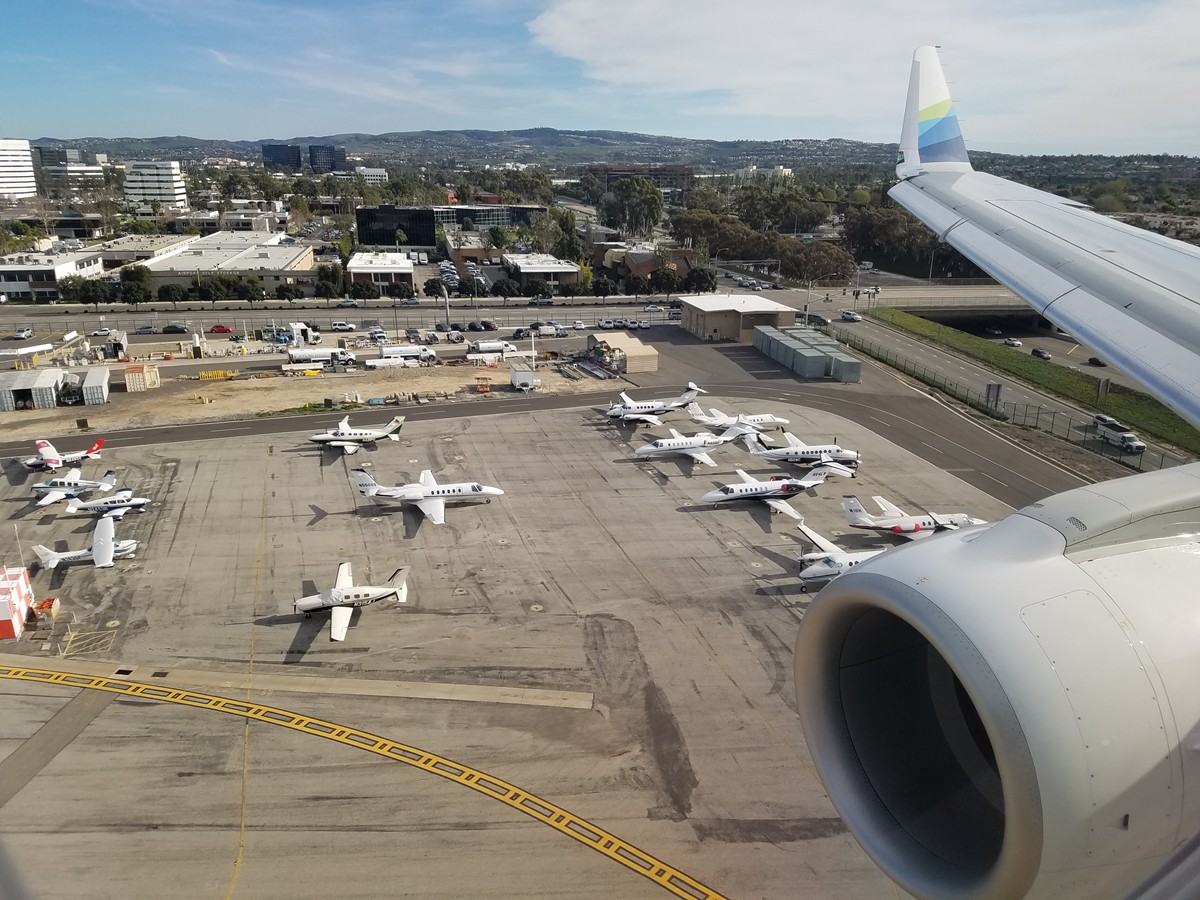 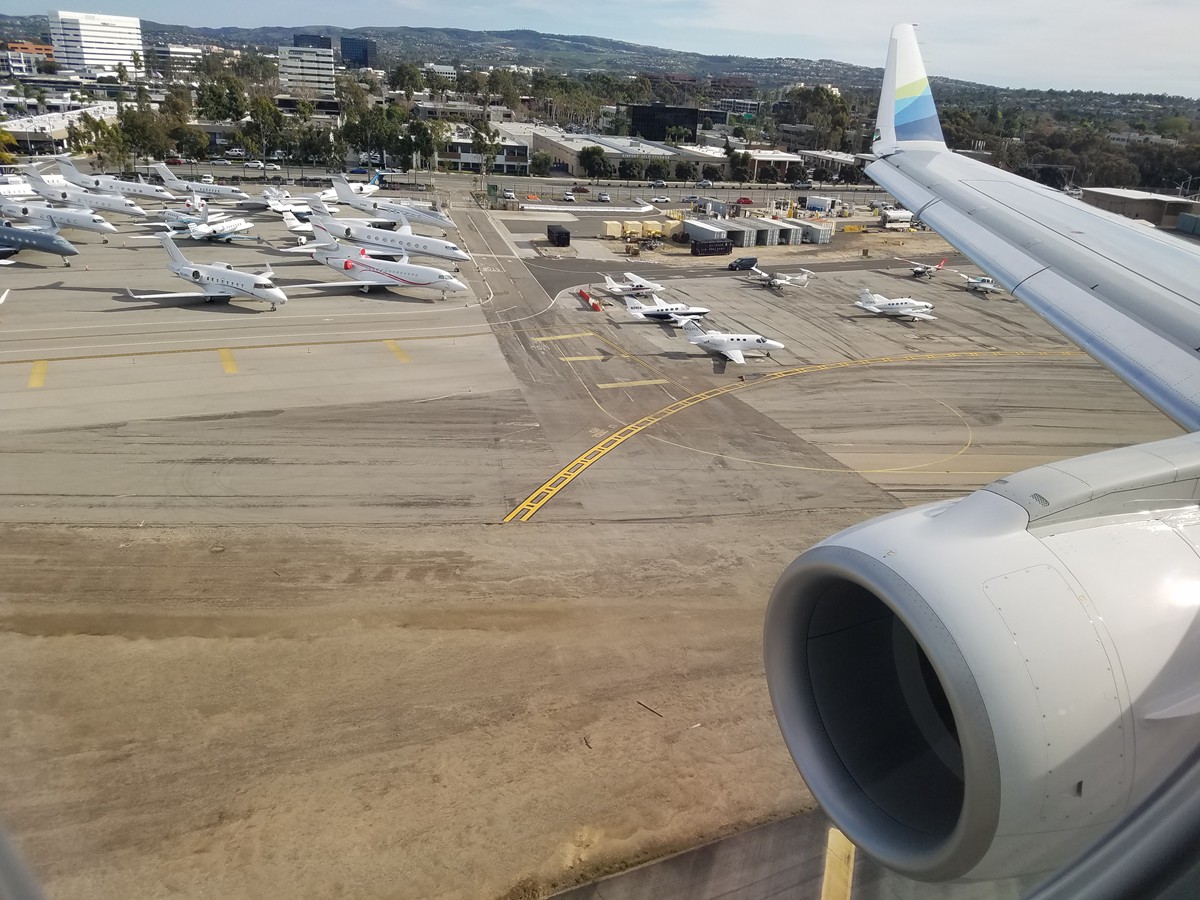 The Cabin: I've always found the EMB-175 to be a comfortable RJ. In F with an empty seat next to you it's as good as many mainline aircraft, especially in fleets like AS and AA with PTVs are forbidden.

The Crew: Edgar was having a terrible day. An anomaly for me as I've had almost always great SkyWest Crews.

The Food and Beverage: NO PDB, and no refill on the drink service. Yes, it's a short flight but there were 8 people and it's "first class" so...

Overall: Below SkyWest standards in my experience.

Thank you for reading and happy flying.