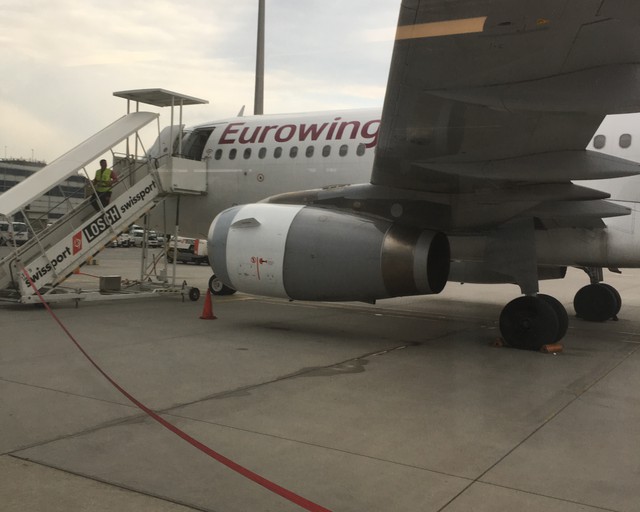 #3 out of 11 Low-cost airlines A minimum of 10 flight-reports within the past two years is required to appear in the rankings. 69 reviews

For those that don’t know I work in Luxembourg. I typically only stay in country for several weeks at a time before heading home to Charlotte, NC. This time however, I have arranged for a short 3 day,3 country trip around Europe. I will be conducting flight reviews on all legs. This second leg will be MUC-CTA on Eurowings. I hope you enjoy this mini-series over the next few posts. ?

For this flight, I was able to check in 72 hours in advance. At check-in, I was allowed to select a free seat in the middle to back portion of the cabin or upgrade closer to the front for EUR 10. I chose to stay in the back and grabbed a wonderful window seat, 21F. I printed my boarding pass and was ready to go. 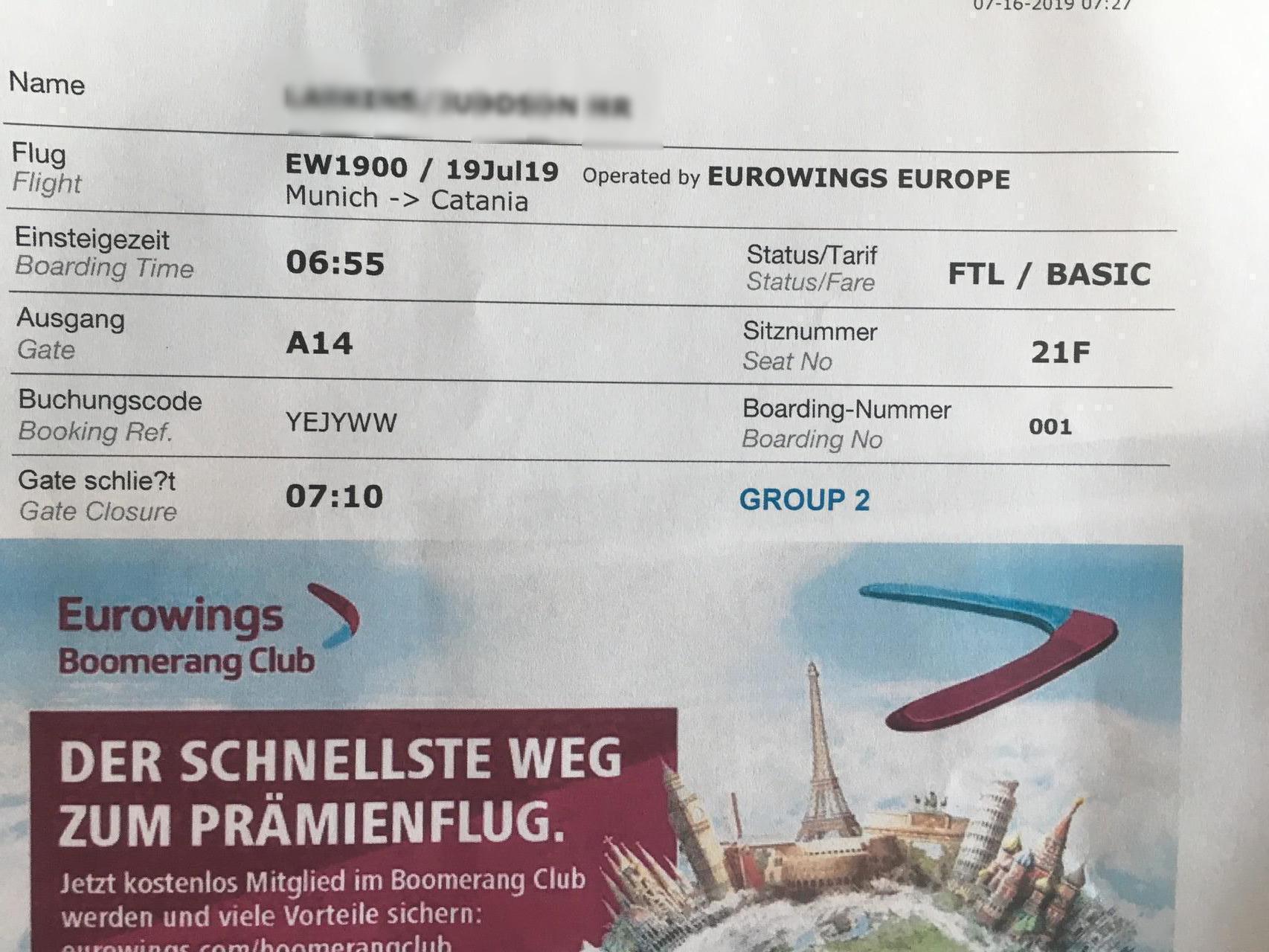 Early the morning of my flight, I received an email saying that the flight was fully booked and that anyone with a cabin bag should go to check-in and check the bag to CTA. So, I made that my first stop. In Terminal 1 at MUC, Eurowings uses the A check in and gate area. When I got in line about 6:00 I was the seen immediately as the line was short and they had 5 agents working. The agent informed me that I could carry my bag on and put it under my seat or check it for free. I decided to keep my leg room for myself and checked my bag…. O what a mistake that was. I was also offered a boarding pass printed on card stock but I declined to save paper and ink. 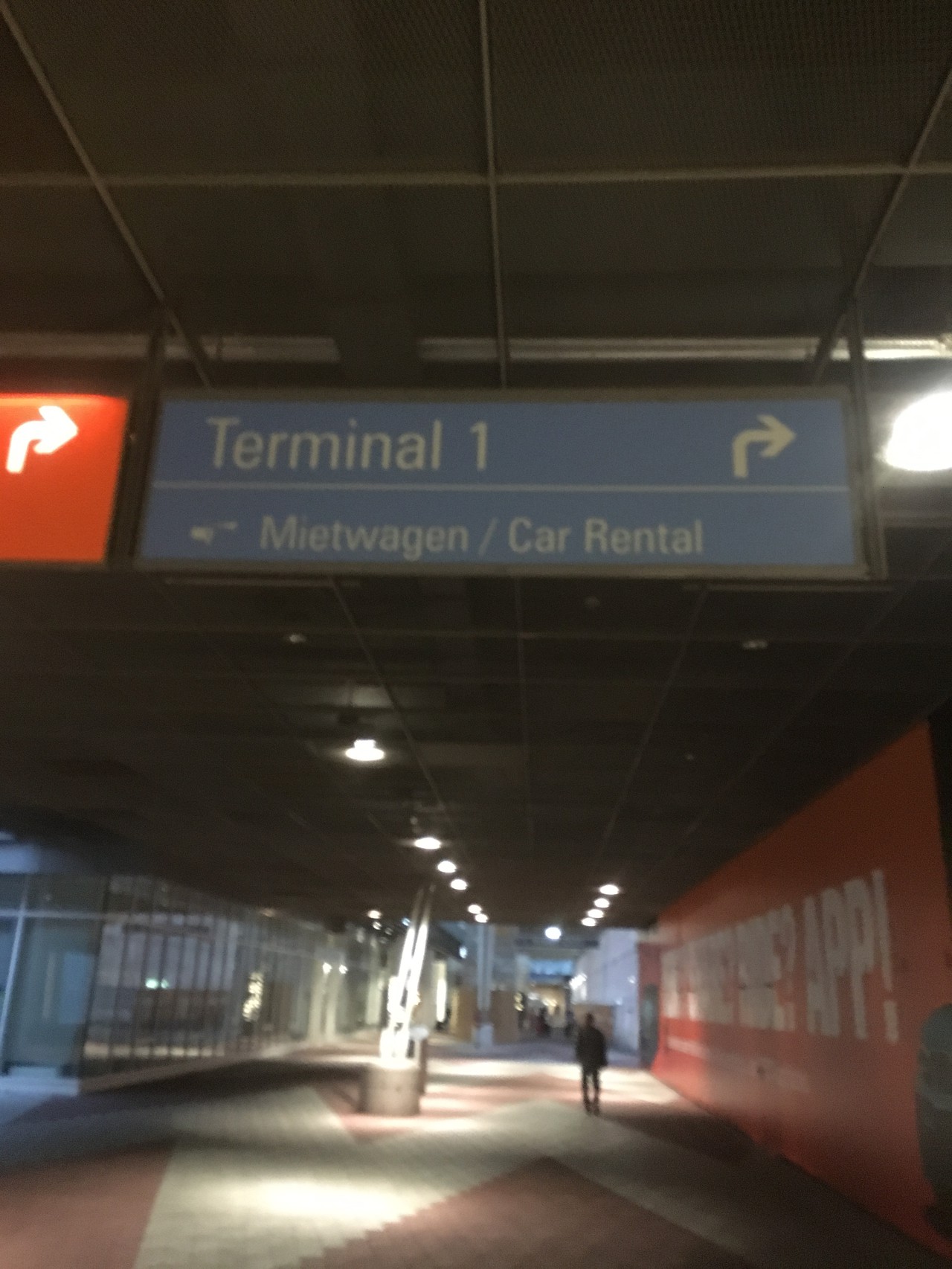 I stayed overnight at the Hilton Munich Airport hotel. It was nice but a bit pricey. It does, however, place you within easy walk of both T1 and T2. My walk that morning was only 10 easy minutes with most coming inside T1. T1 is interesting as it feels almost like a shopping mall. The A area is also the farthest from the entrance I used so likely your walk will be shorter than mine.

I entered security at 6:05, with maybe 30 people in line and 3 lanes moving. It progressed slowly as most people seemed to not know that this was for an airport and forgot the prepare their belongings (sorry if it seems I’m Mr. Grinch about this). All in all it was still not that slow and I was out in around 10-12 minutes.

Once through security A gates are directly in front of you. This section of T1 is very small. It appears you can get to other letter gates as well, but I didn’t try. My gate, which had changed at least 2 times prior was now A26. This did not matter much as all gates in the A are were bus gates. The area had some food, but I declined as I wanted to try the BoB menu. Boarding started a full 7 minutes ahead of schedule. I boarded with 99% of passengers in Group 2.

The drive to our A319 was not too long and offered great plane spotting. I was not able to get a picture as I had to hold on while we moved. We boarded the aircraft through front and back doors however, unlike on Ryanair, your boarding pass did not tell you which to use so as you can imagine, the aisle was a bit crowded with annoyed passengers. 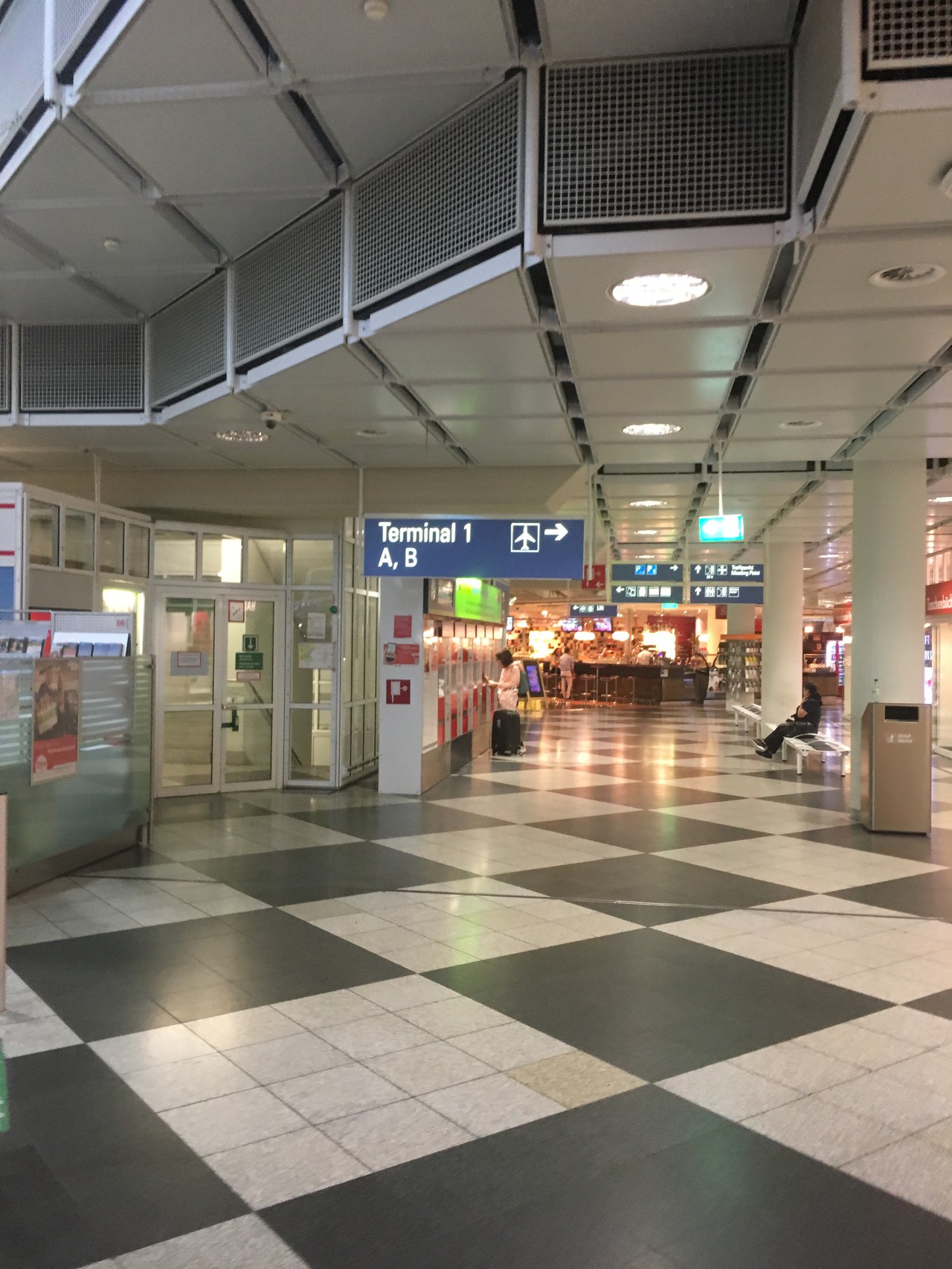 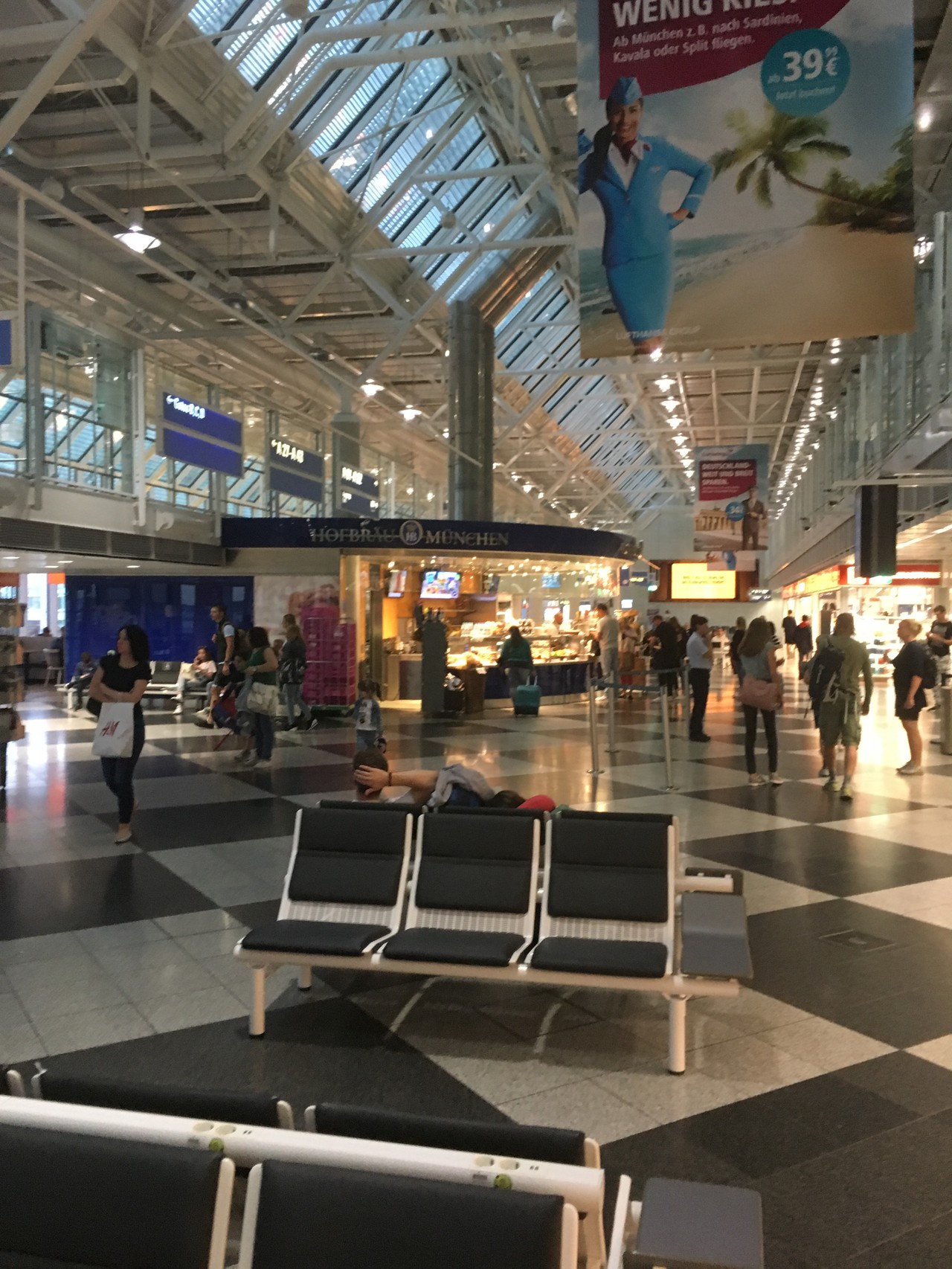 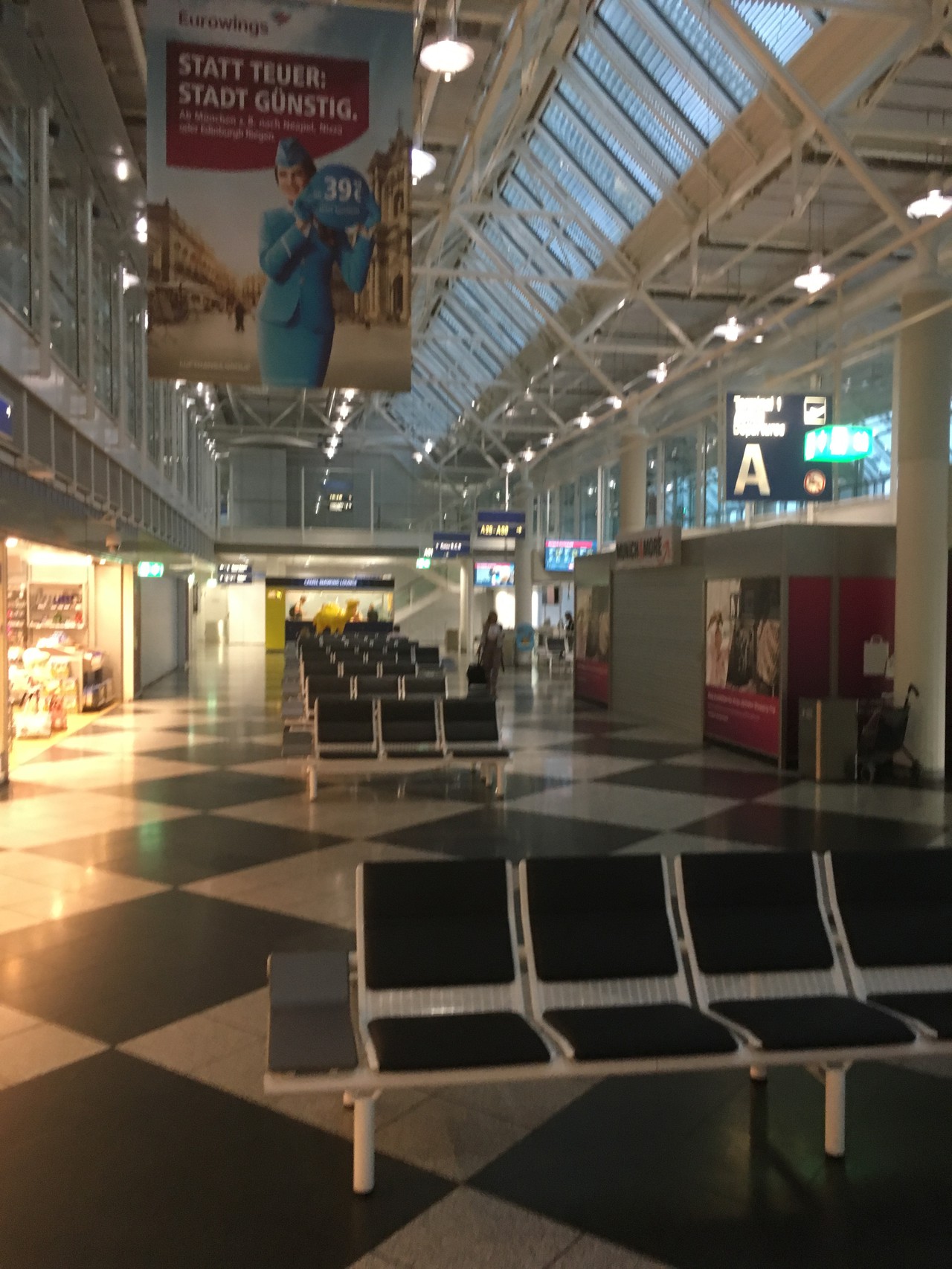 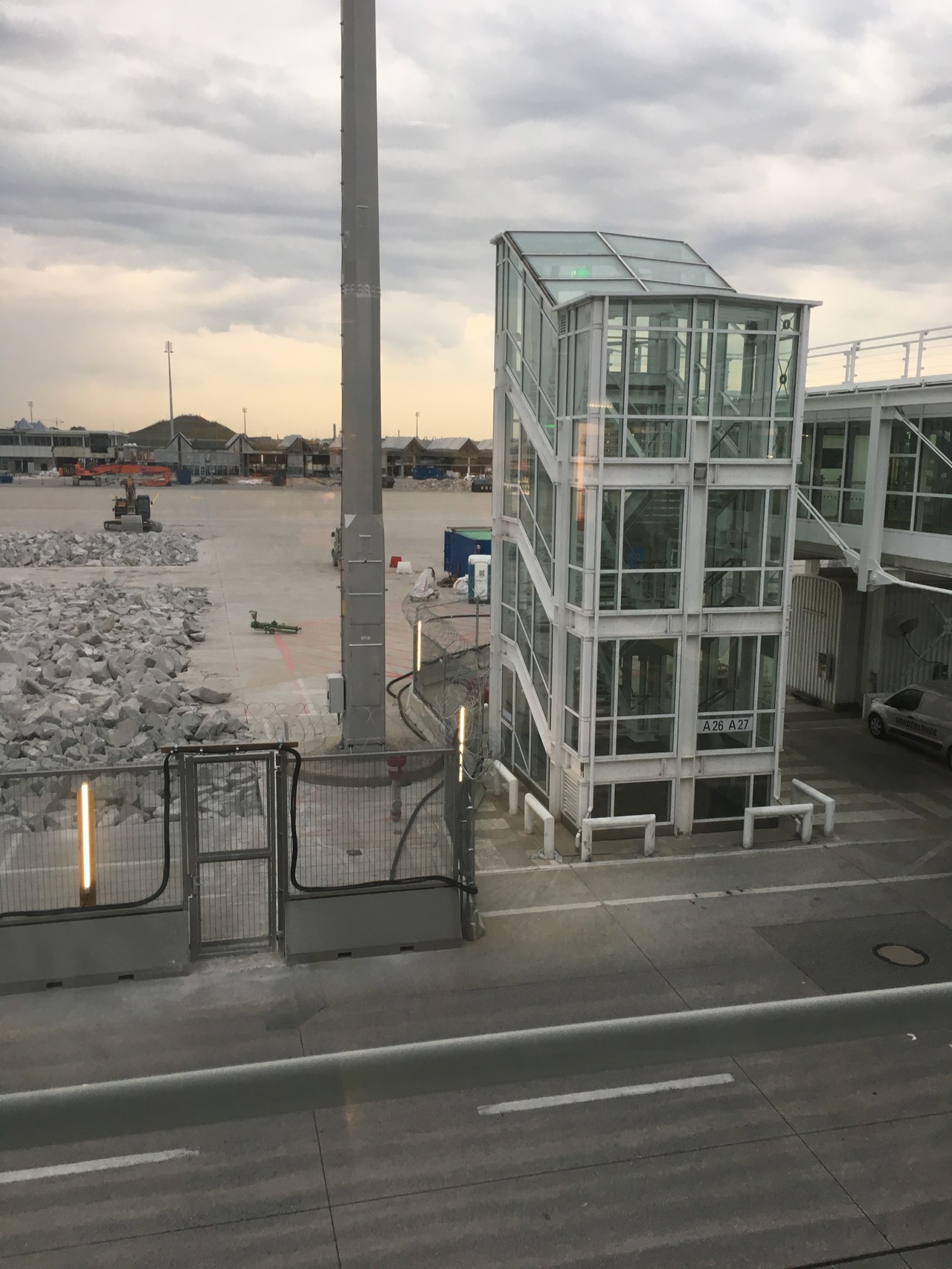 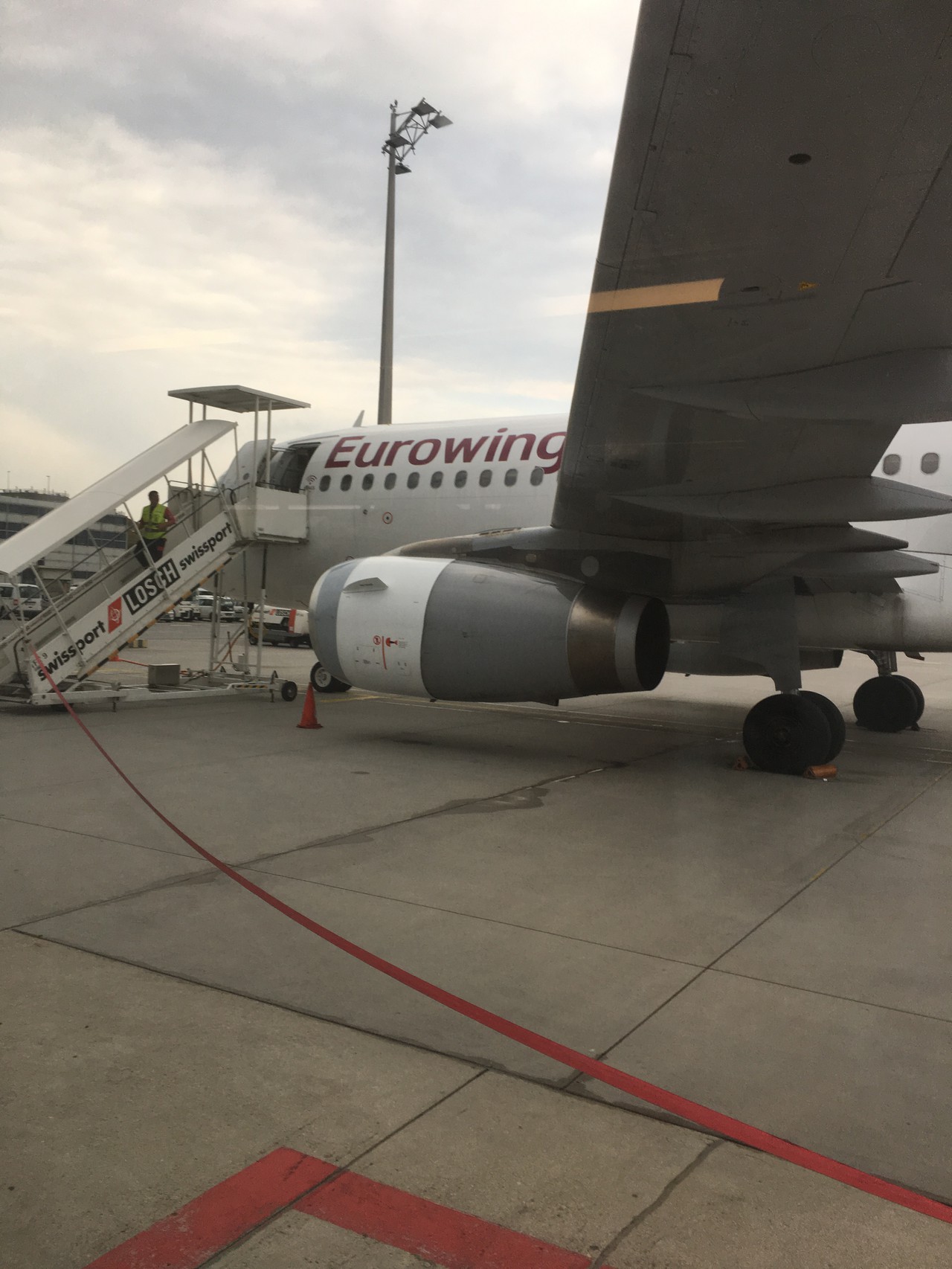 The leg room was fine for such a short flight. The seat was a bit lumpy, but it could recline so that was rally nice. The cabin seemed clean and fresh. I like Eurowings every time I fly them. 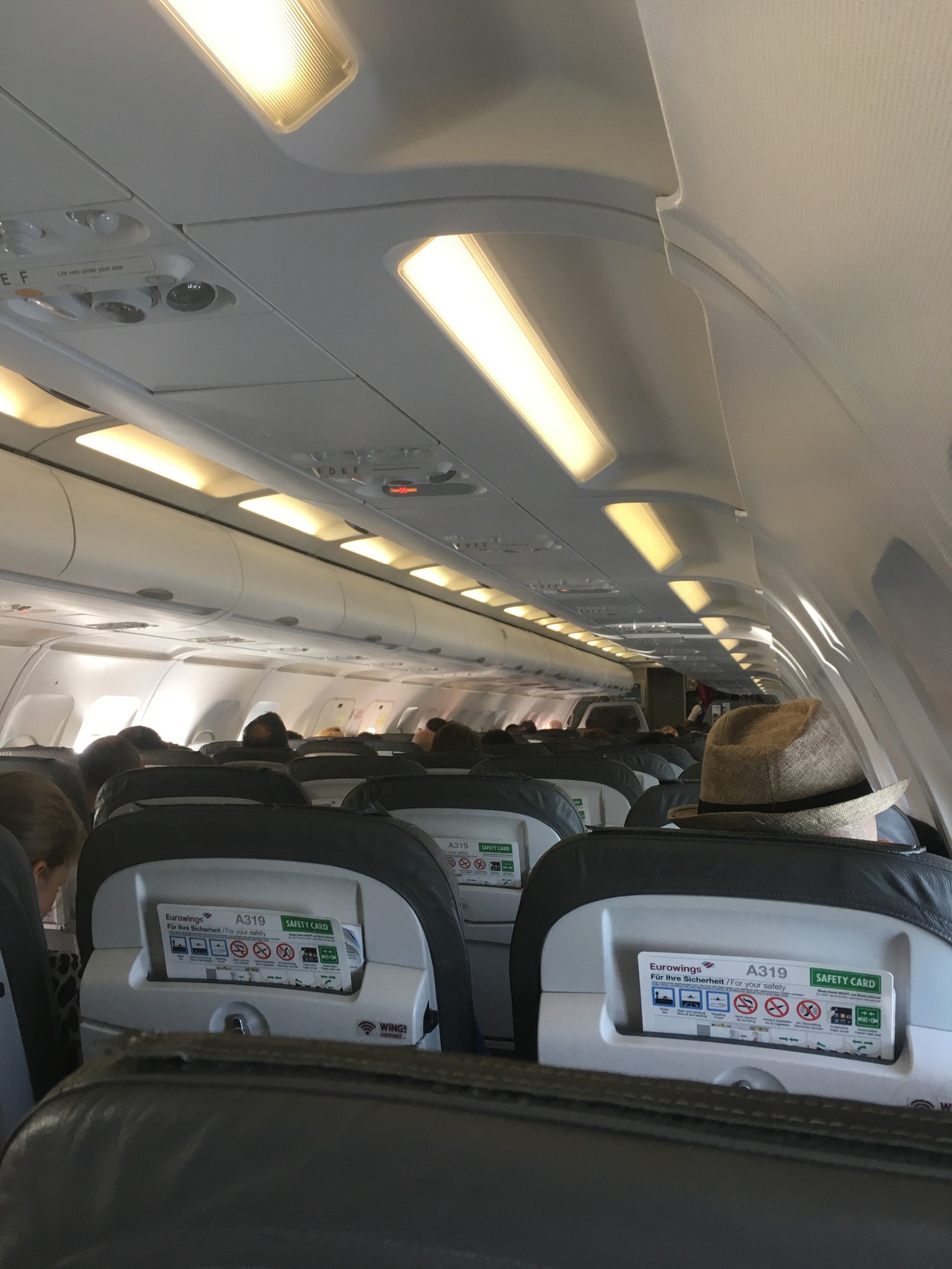 No power outlets but that is not to be expected. They did advertise “Wings Connect” but I had issues even reaching a login page. In the seatback you had a safety card, duty free/food and beverage book and the Eurowings magazine which was nice. 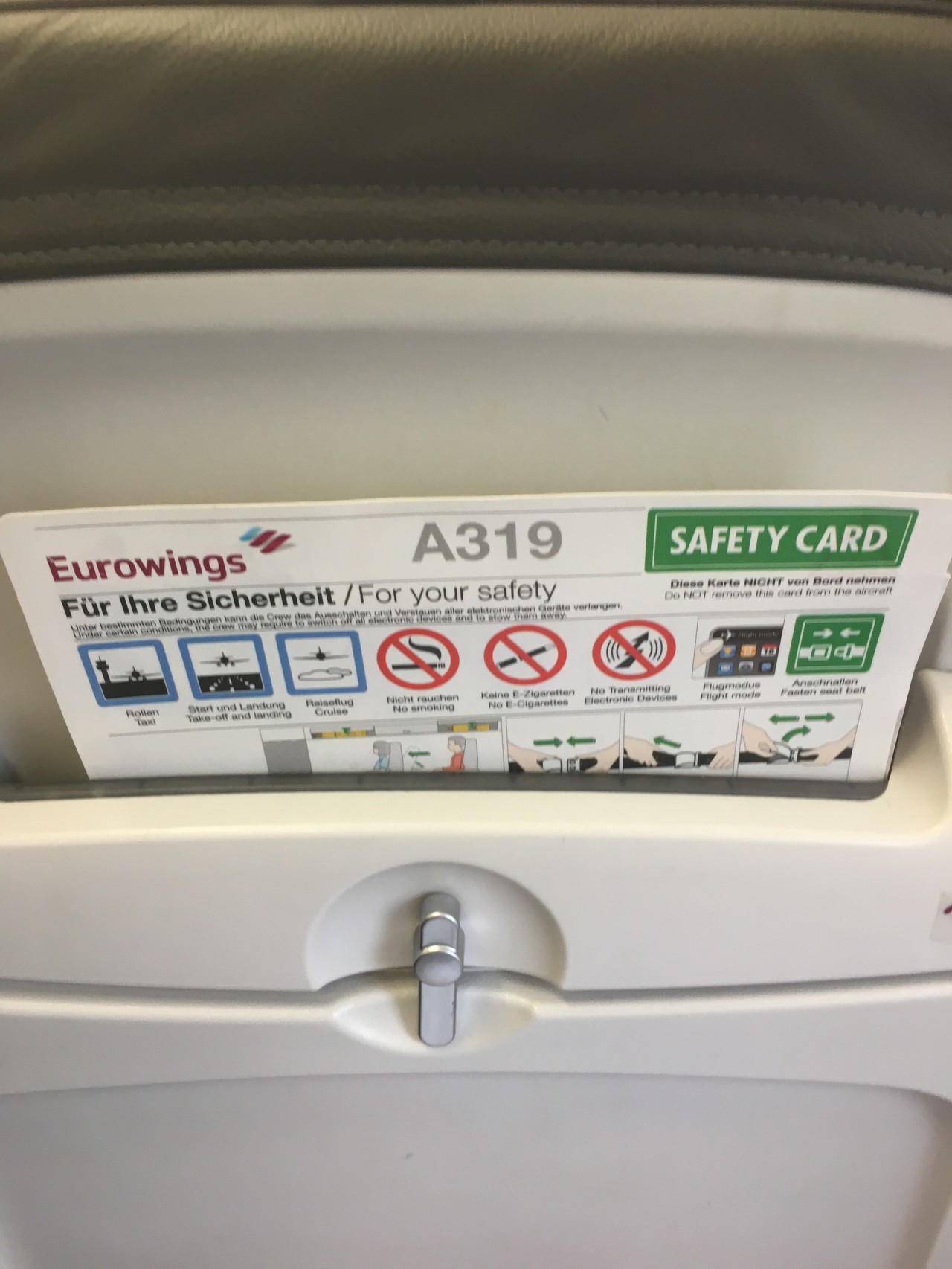 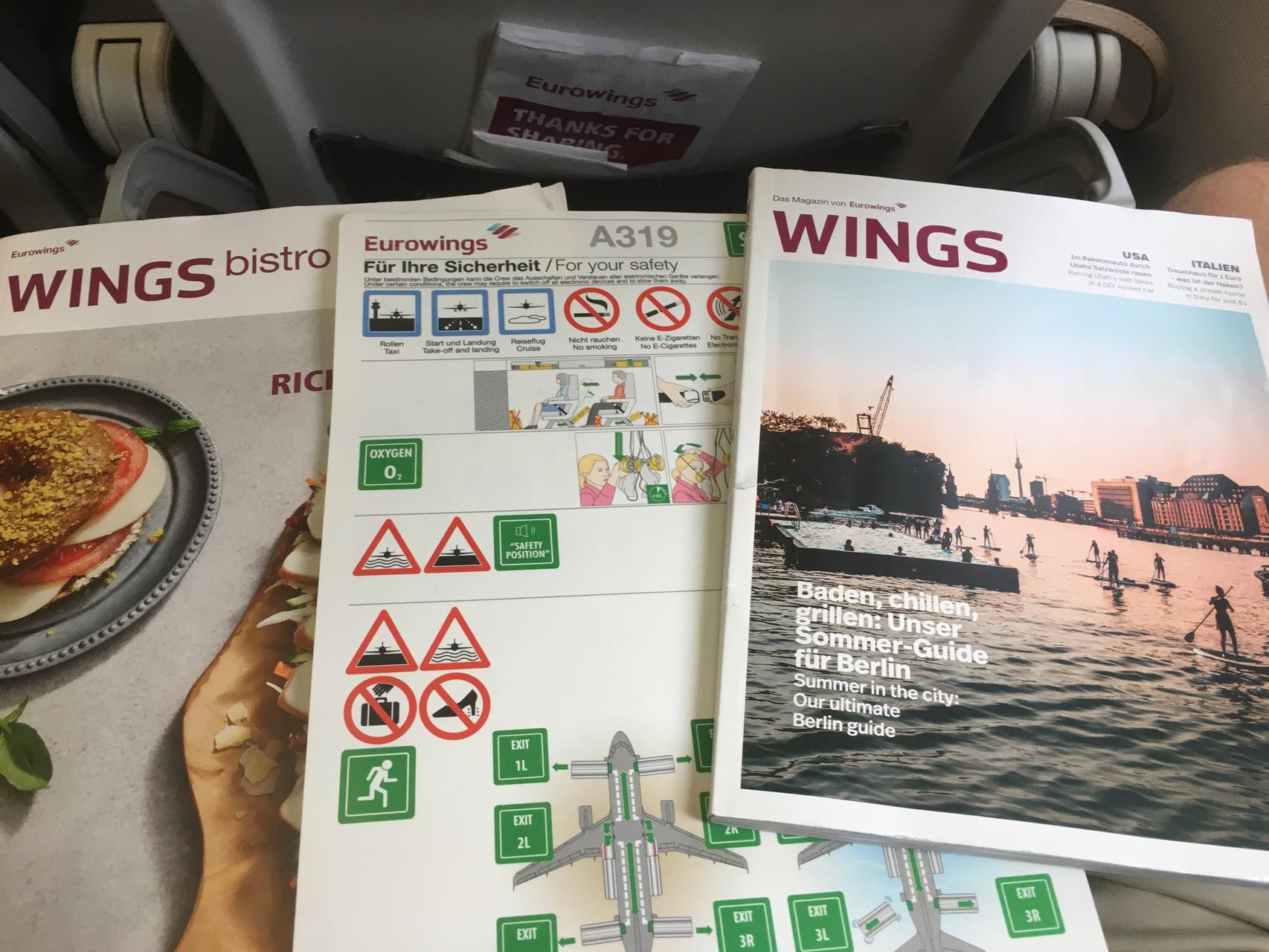 Food and beverage began around 23 minutes after takeoff. Eurowings uses 3 carts and one started just in front of me so I was served very quickly. I decided against any food and settled for a EUR 2.50 coffee which was nice. The price is pretty cheap too. This was the only beverage service but if you wanted more you just had to ring the FA.

We had a very nice cabin crew. They were constantly smiling. 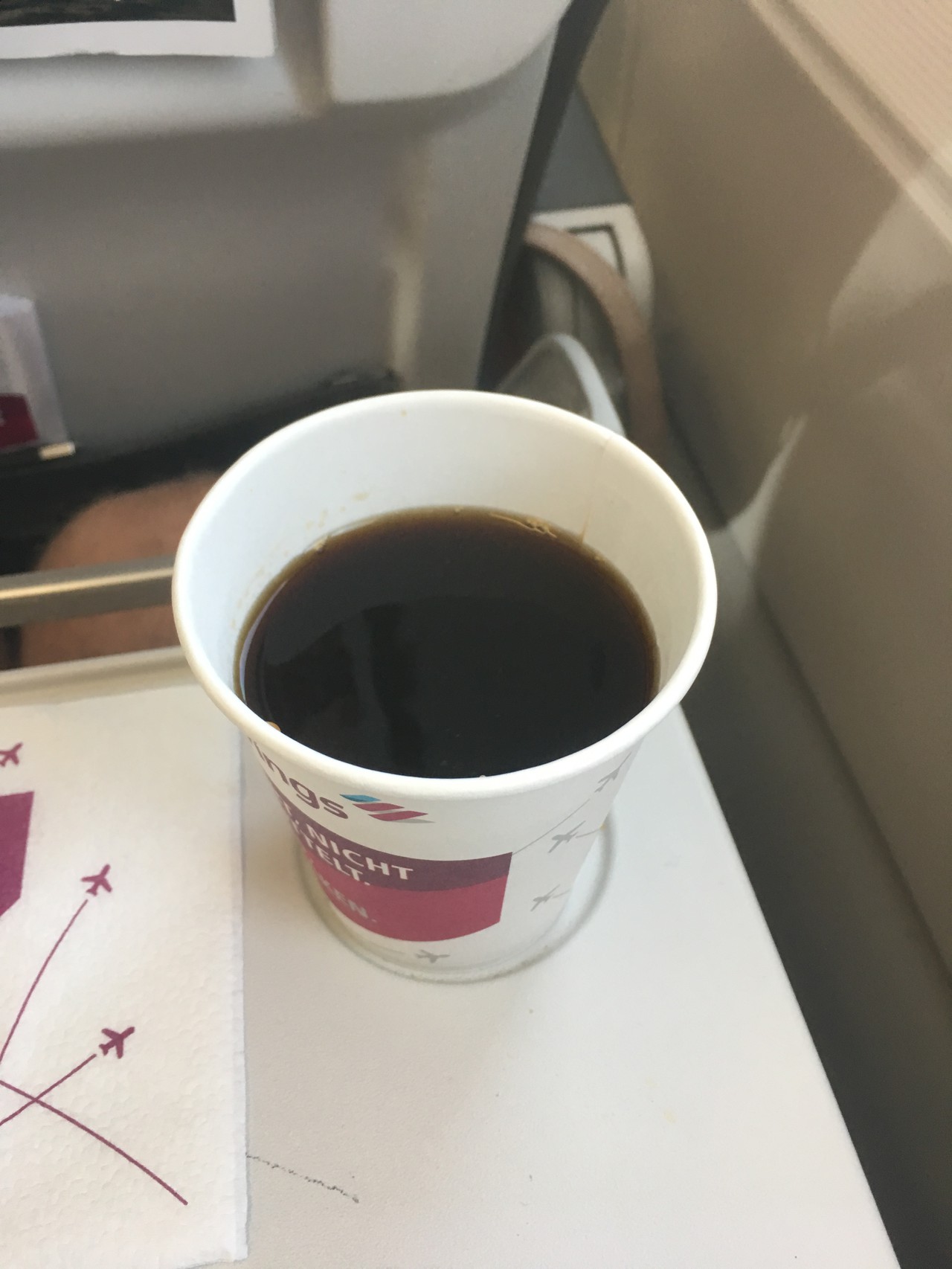 Boarding was completed at 7:15 and we pushed back at 7:22. We had a decent taxi to 26L. At 7:35, we had wheels up towards Sicily!  The flight was very smooth and we touched down really early at 9:15. We parked at a remote stand. It seemed only half a dozen or so jetbridge gates and those were used by legacy carriers and all Low Cost airlines were using buses.

I think our early arrival set off a chain of events that left passengers very frustrated. Once parked we had to wait 15 minutes or so before the buses arrived. Luckily we had a nice view of Mt. Etna. 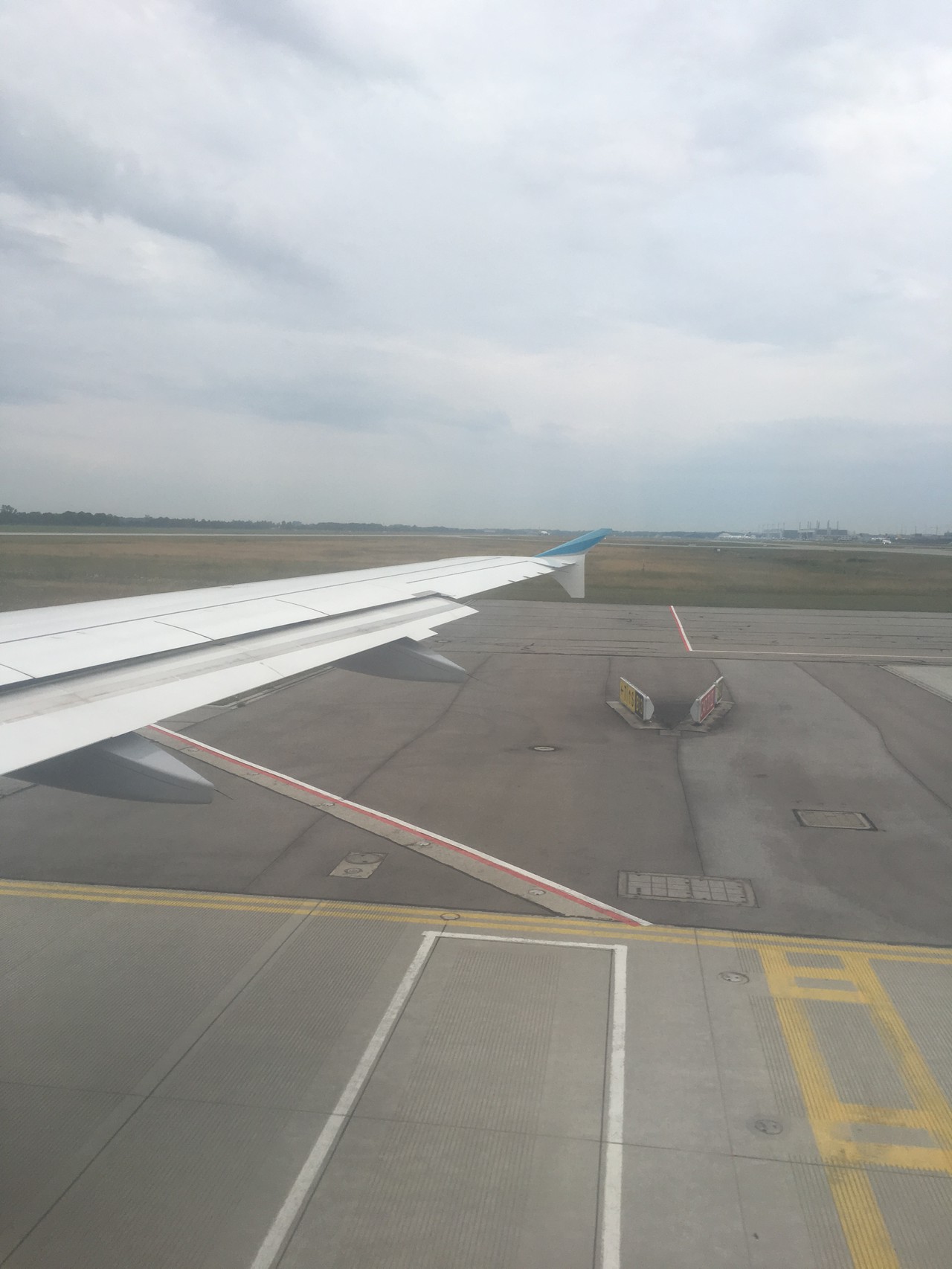 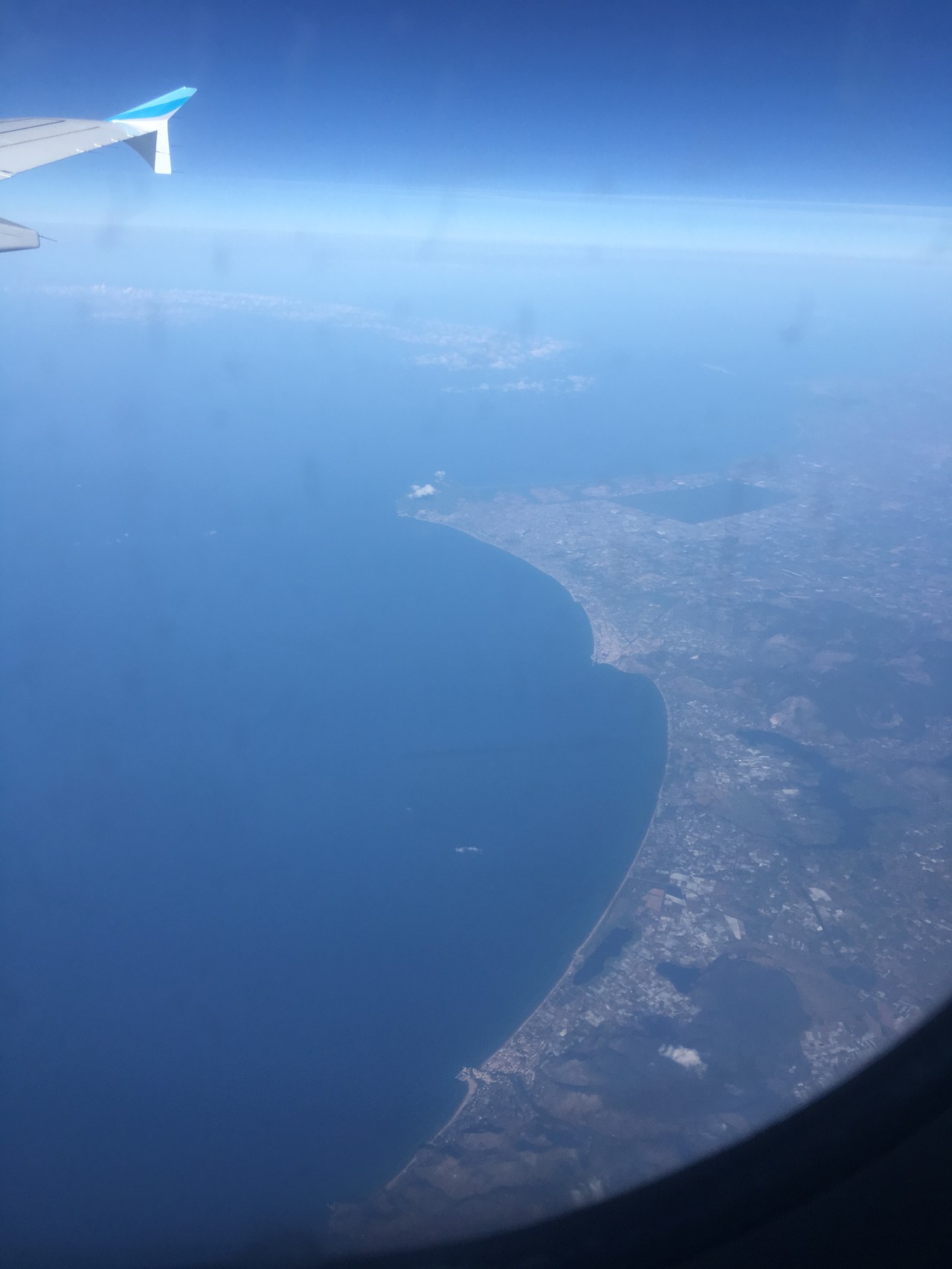 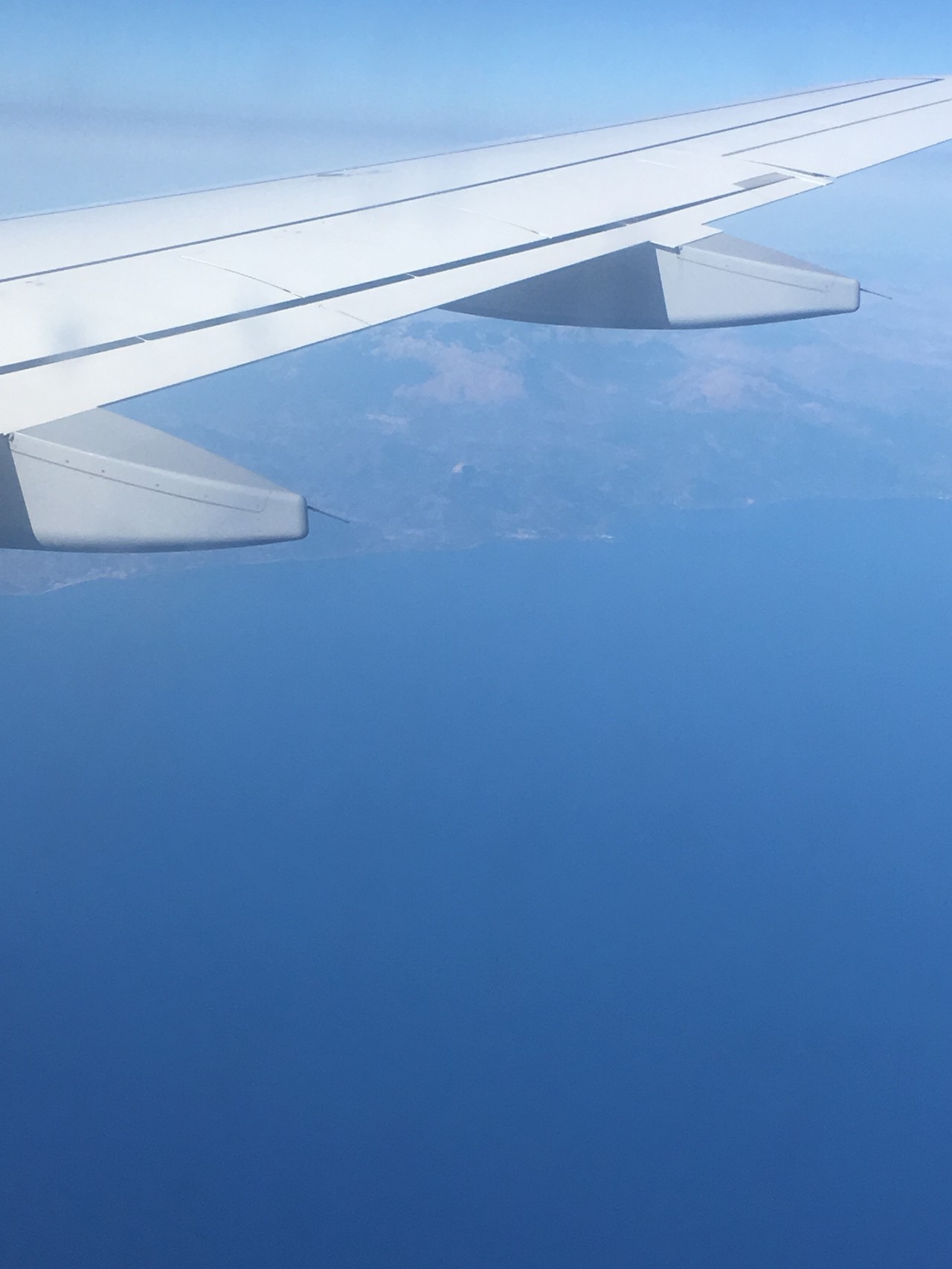 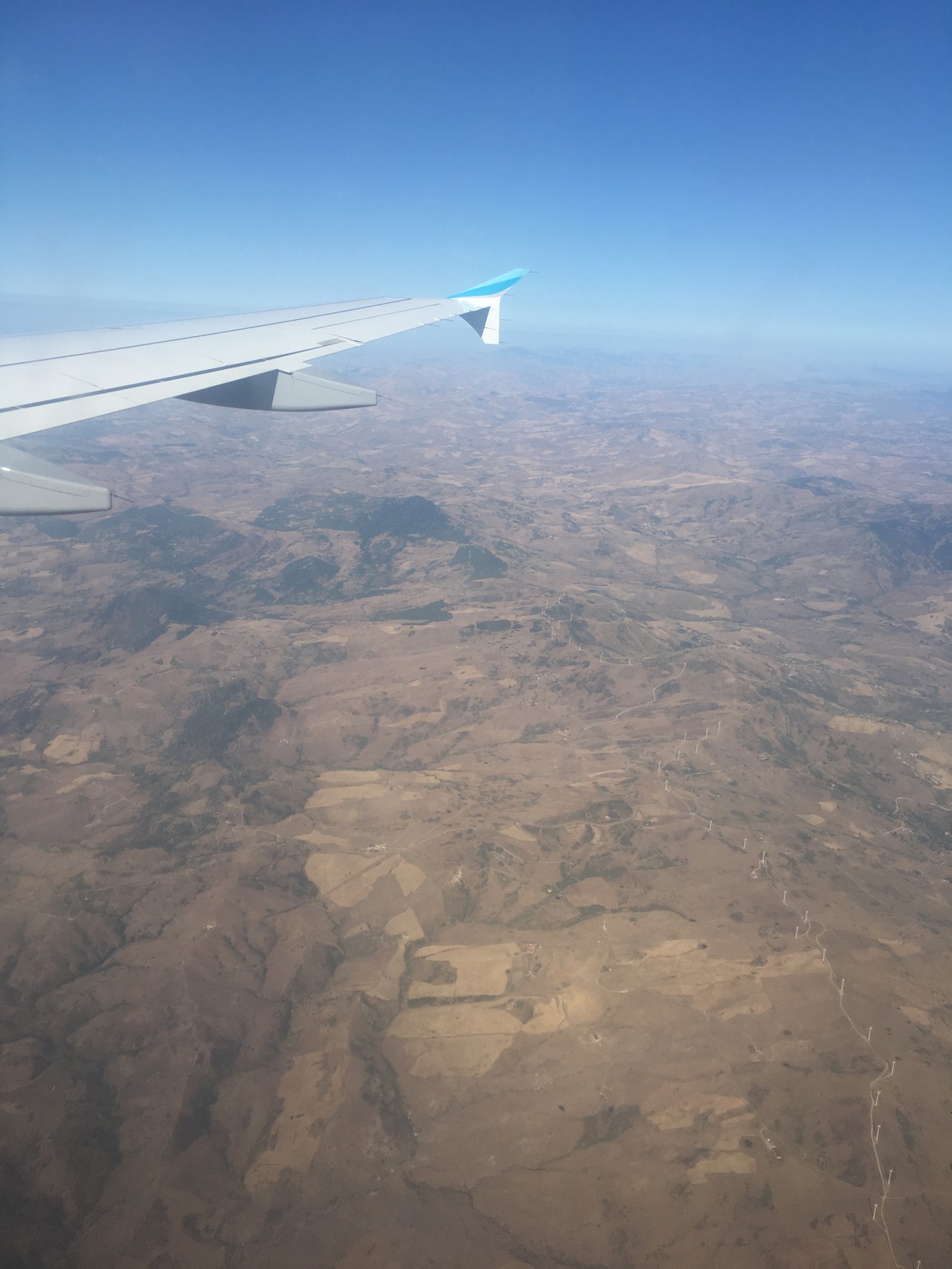 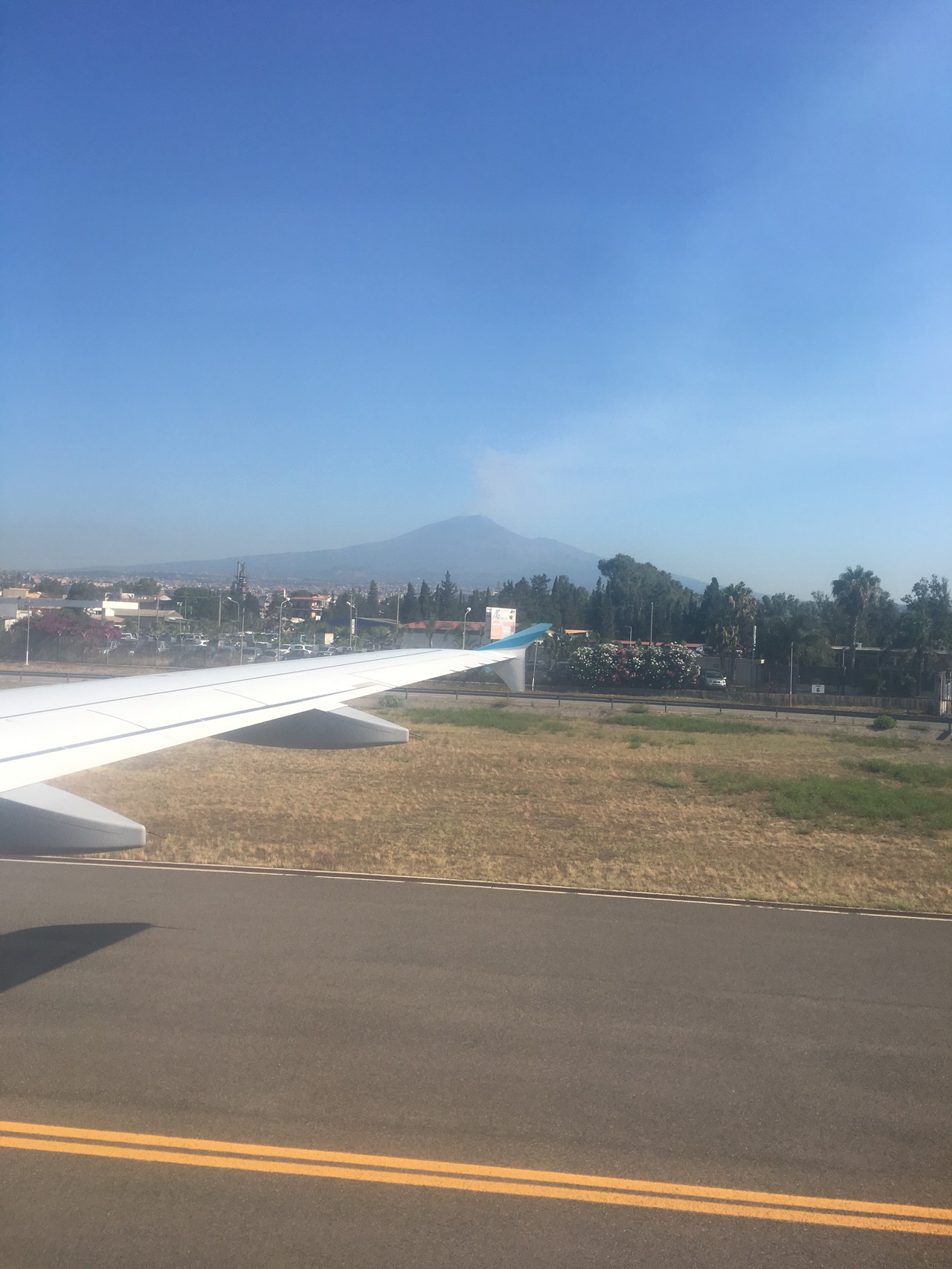 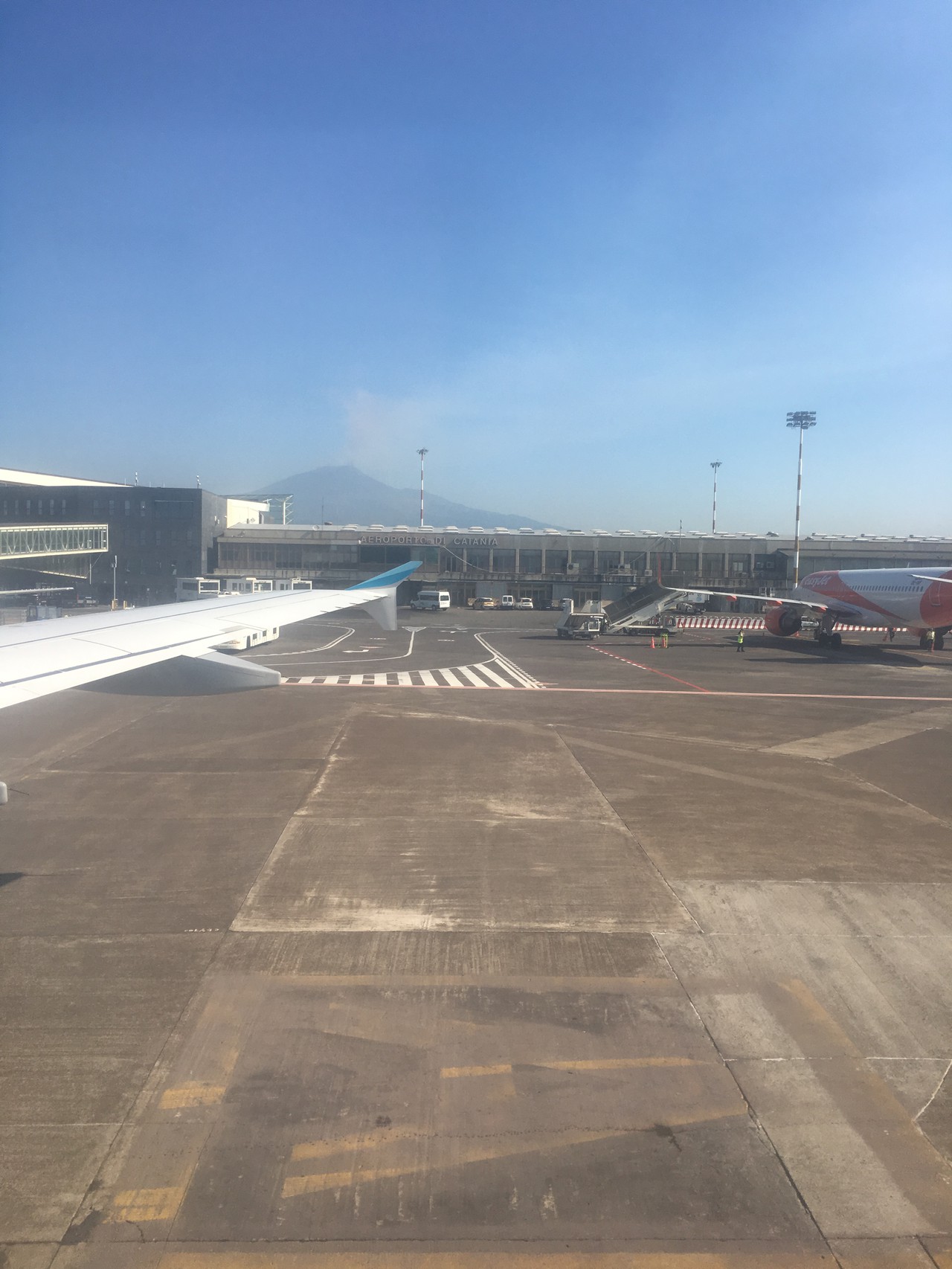 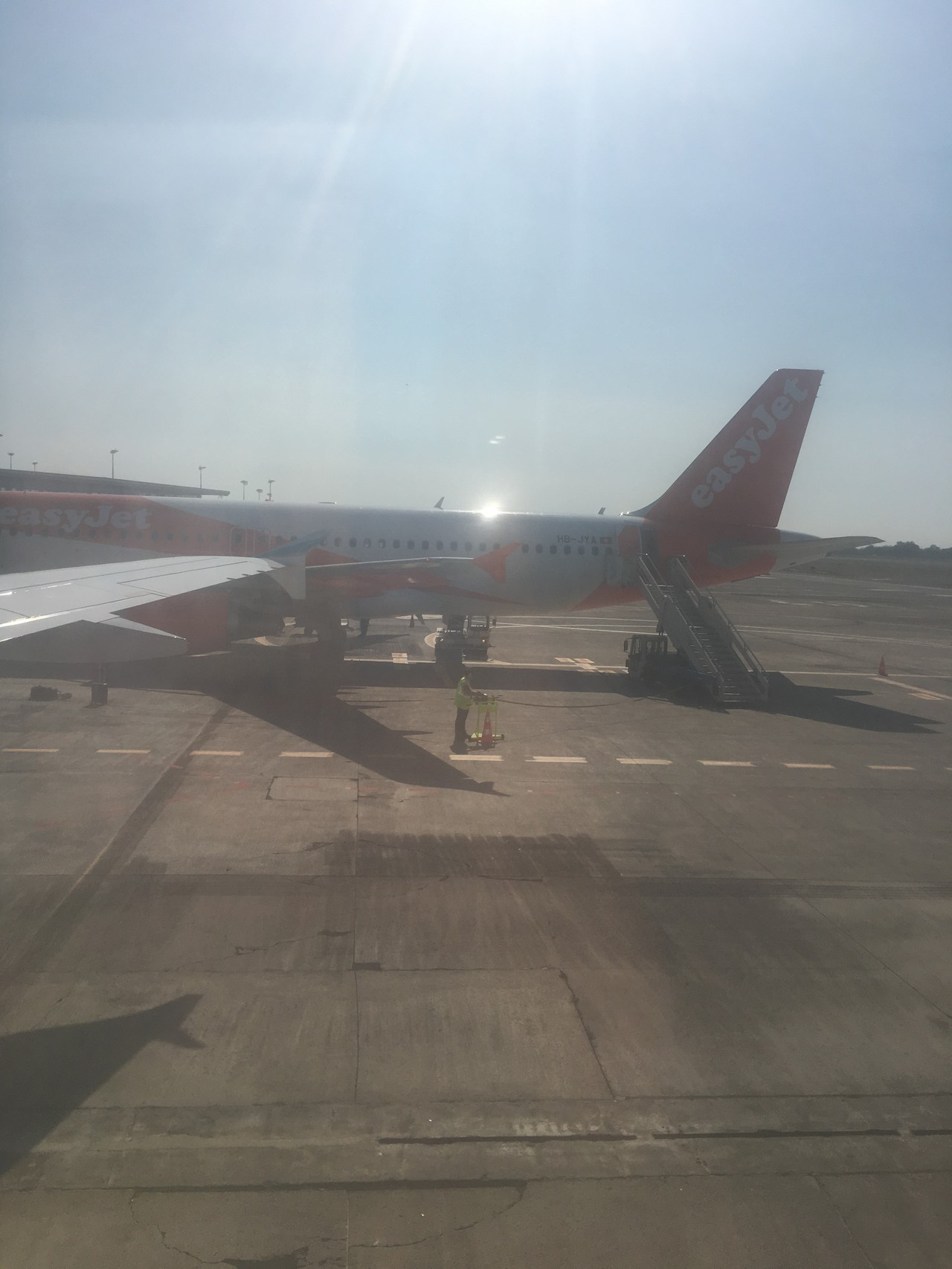 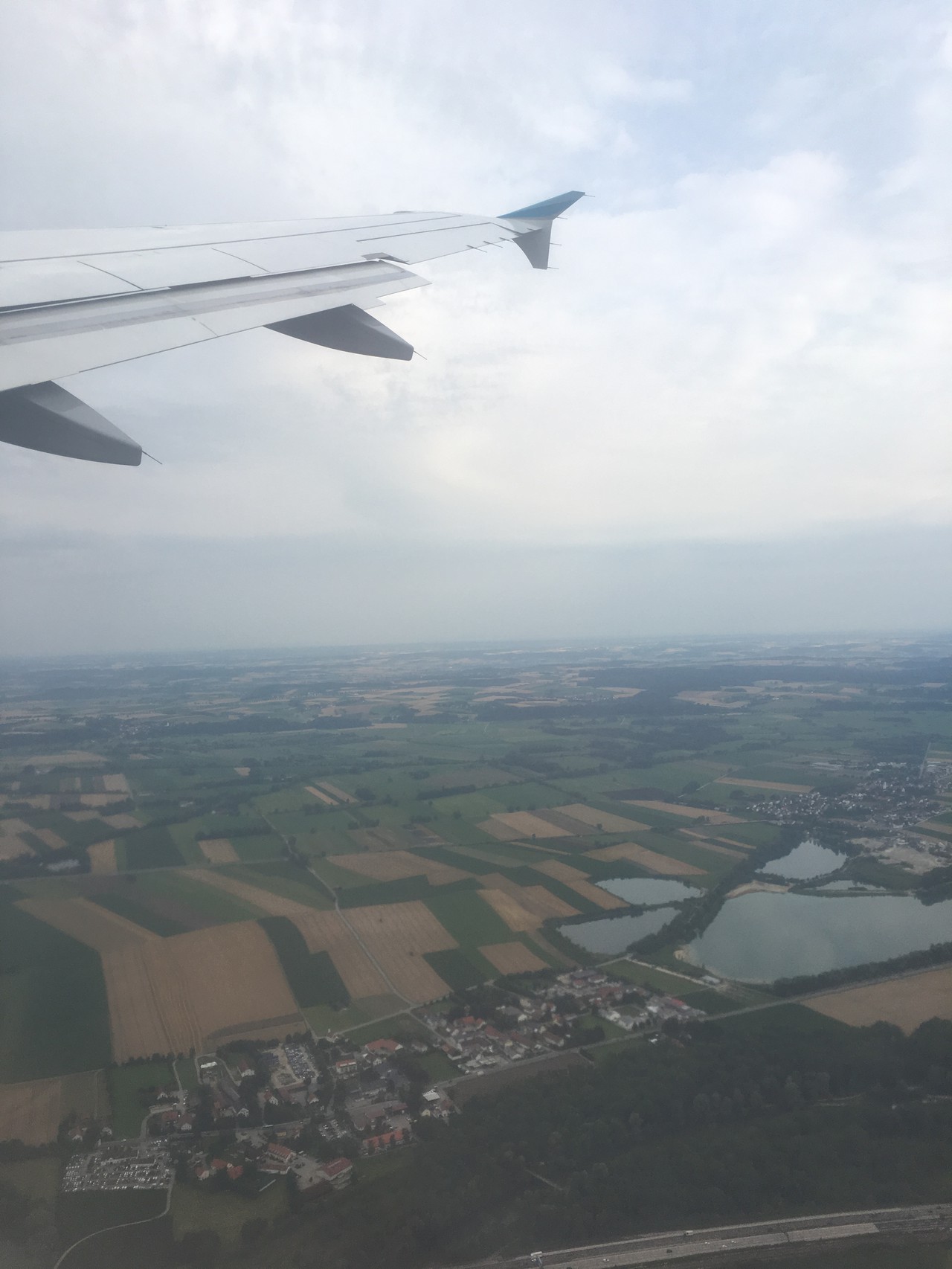 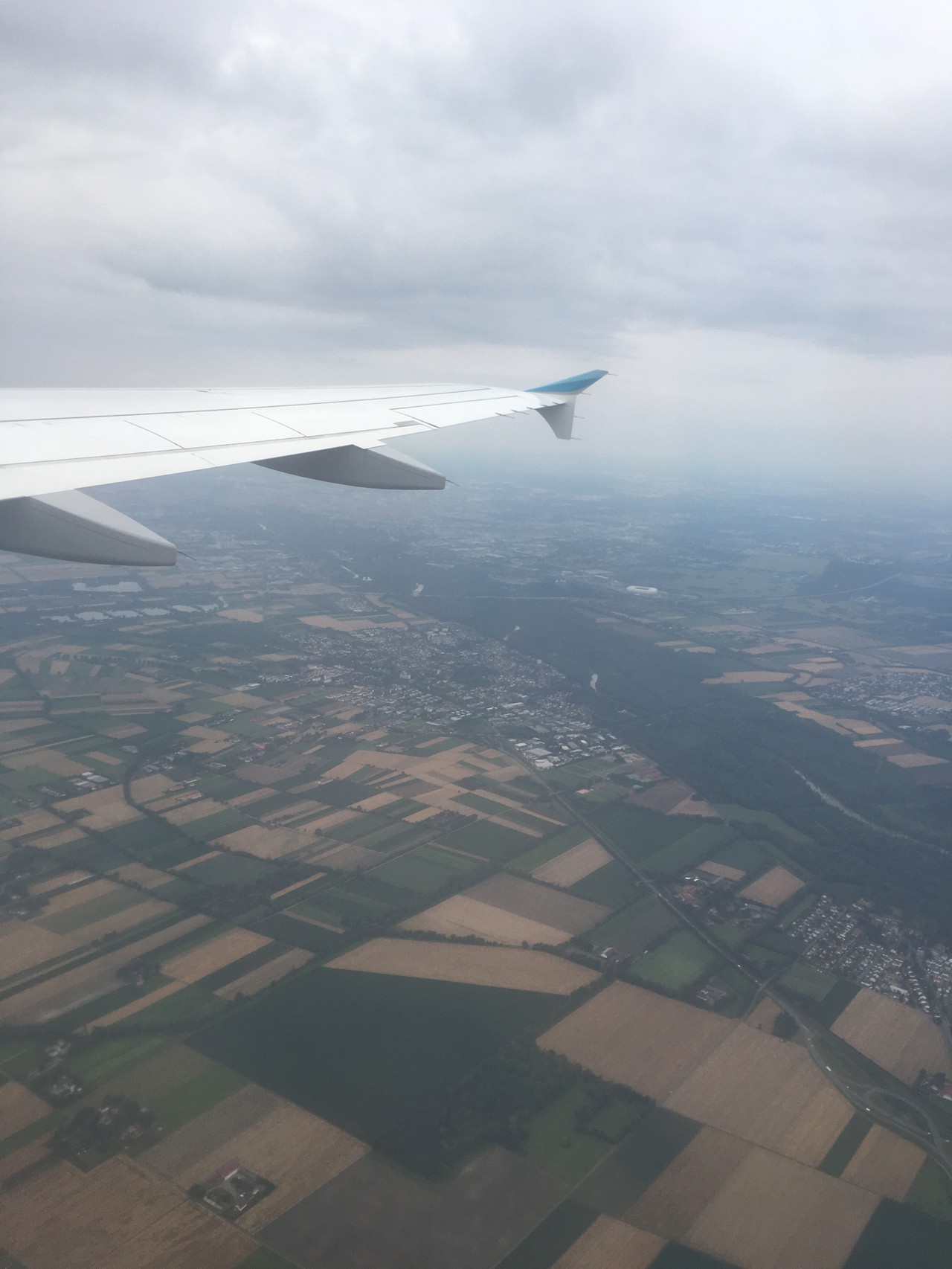 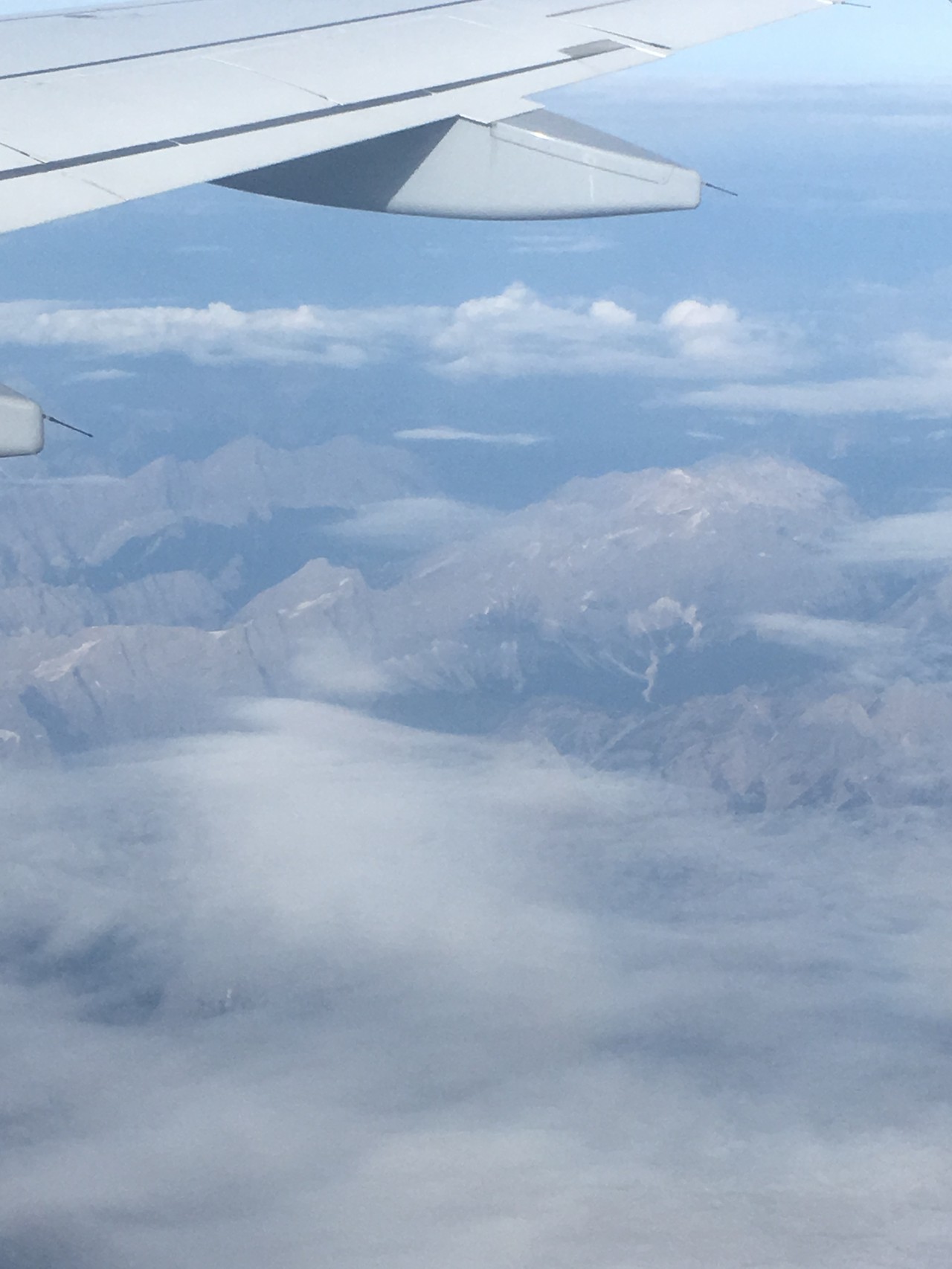 The baggage claim area was very small and way over-crowded. Our baggage was to arrive at Bag Claim 2. We waited… and waited and waited. Finally 55 minutes after we touched down the first bag arrived with mine arriving 5 minutes after that. I should have just gave up the leg room like the nice gate agent wanted me to do.


Now off to explore Catania! Next flight Easy Jet to CDG! 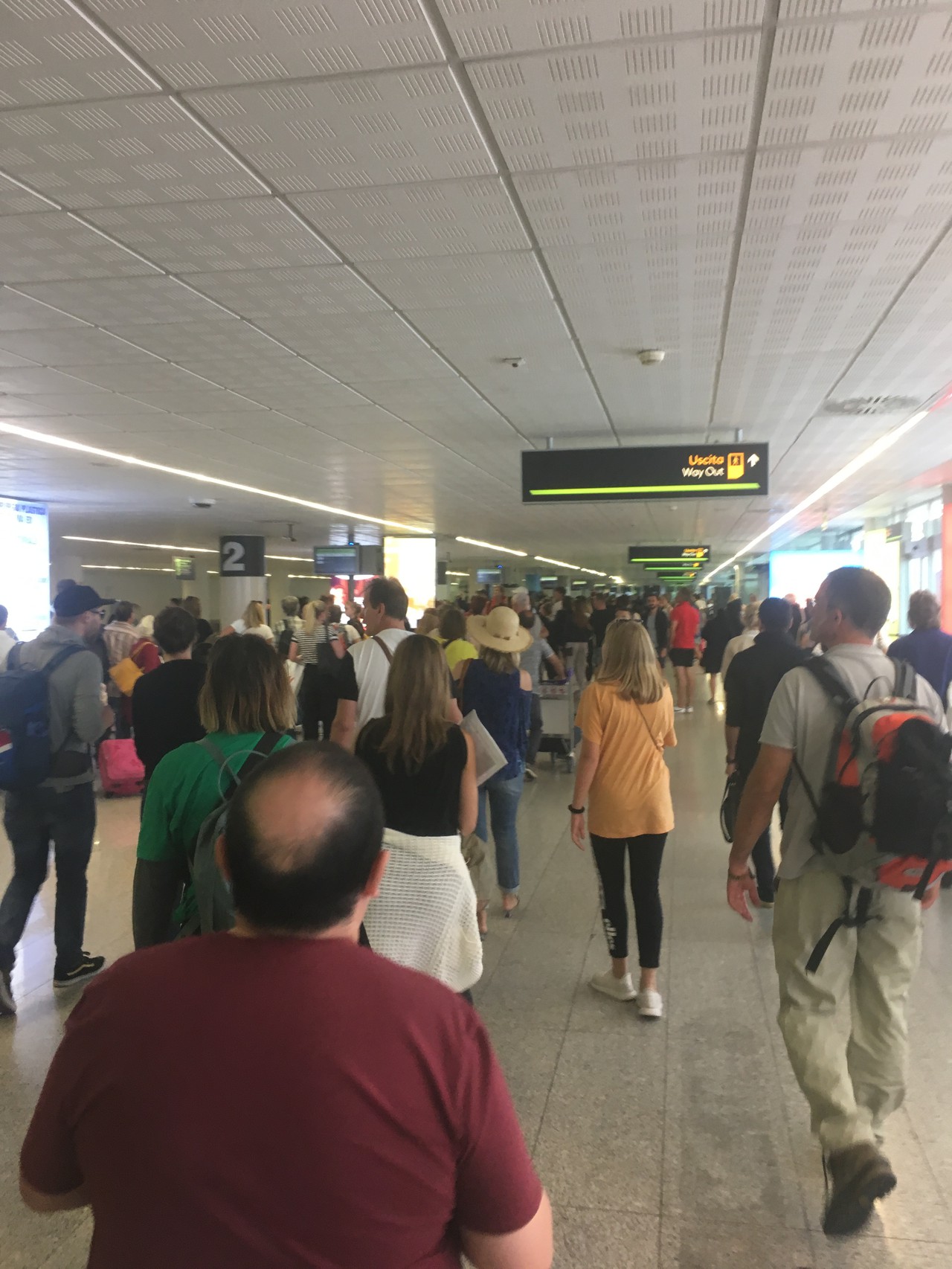 Eurowings is a good airline to fly. The baggage situation is hoping a once in a blue moon affair.

He wrote 32 reviews about 10 airlines and 23 airports.