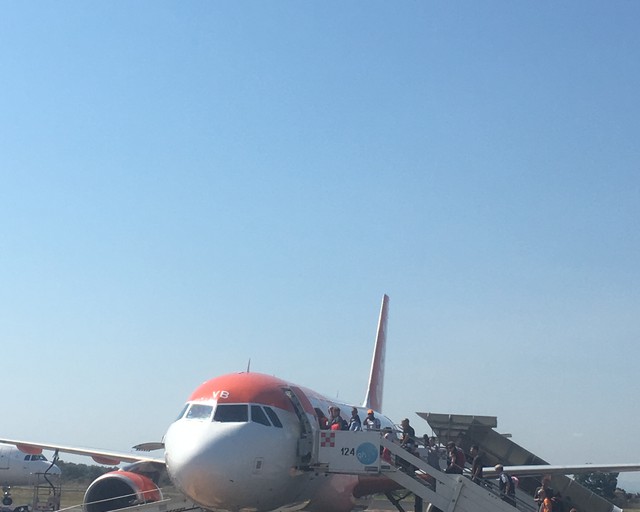 #7 out of 11 Low-cost airlines A minimum of 10 flight-reports within the past two years is required to appear in the rankings. 689 reviews

For those that don’t know, I work in Luxembourg. I typically only stay in country for several weeks at a time before heading home to Charlotte, NC. This time however, I have arranged for a short 3 day, 3 country trip around Europe. I will be conducting flight reviews on all legs. This last leg will be CTA-CDG on easyJet. I hope you enjoyed this mini-series. ?

easyJet like Ryanair, allows you to check in a whopping 30 days in advance of your flight. I decided to roll the dice and check in as soon as possible. Rule of thumb is that the earlier you check in the most likely you are to get a middle seat or a window seat in the middle of the plane as easyJet is still trying to entice sales of more desirable seats. I was randomly given 19F. I was ok with this as it was just far enough back to clear the wing for nice views. Since easyJet uses front and back doors to board and disembark, the middle is less desirable than the back.

The check in process was smooth and I was given a chance to print a BP or use the mobile app. I chose to print and 30 days before my flight, I was ready to go!

I stayed at the Hotel Mercure in the middle of Catania. To reach the airport your only two options are by car or by bus. A taxi takes around 15-20 minutes and cost upwards of EUR 30. I decided to take the Alibus. The fare is only EUR 4 but the ride can be crowded and can take upwards of an hour if traffic is bad.

I was at the bus stop early for the 6:23 bus that arrived at 6:31. Within several stops the bus was standing room only so the driver decided to skip the rest and went straight to the airport. We arrived after a total journey taking only 30 minutes. I would advise if you have issues moving or have large luggage to take a taxi. 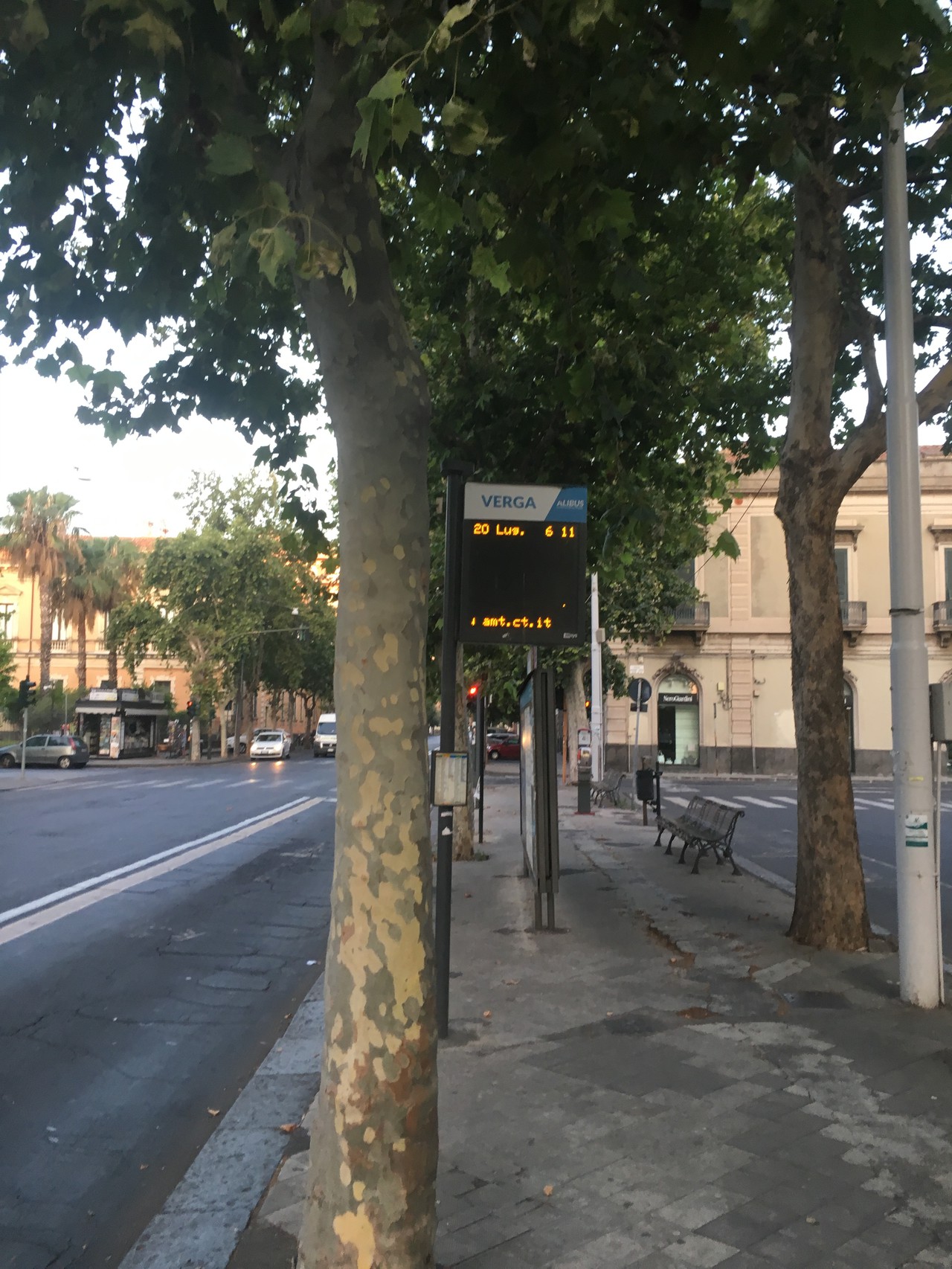 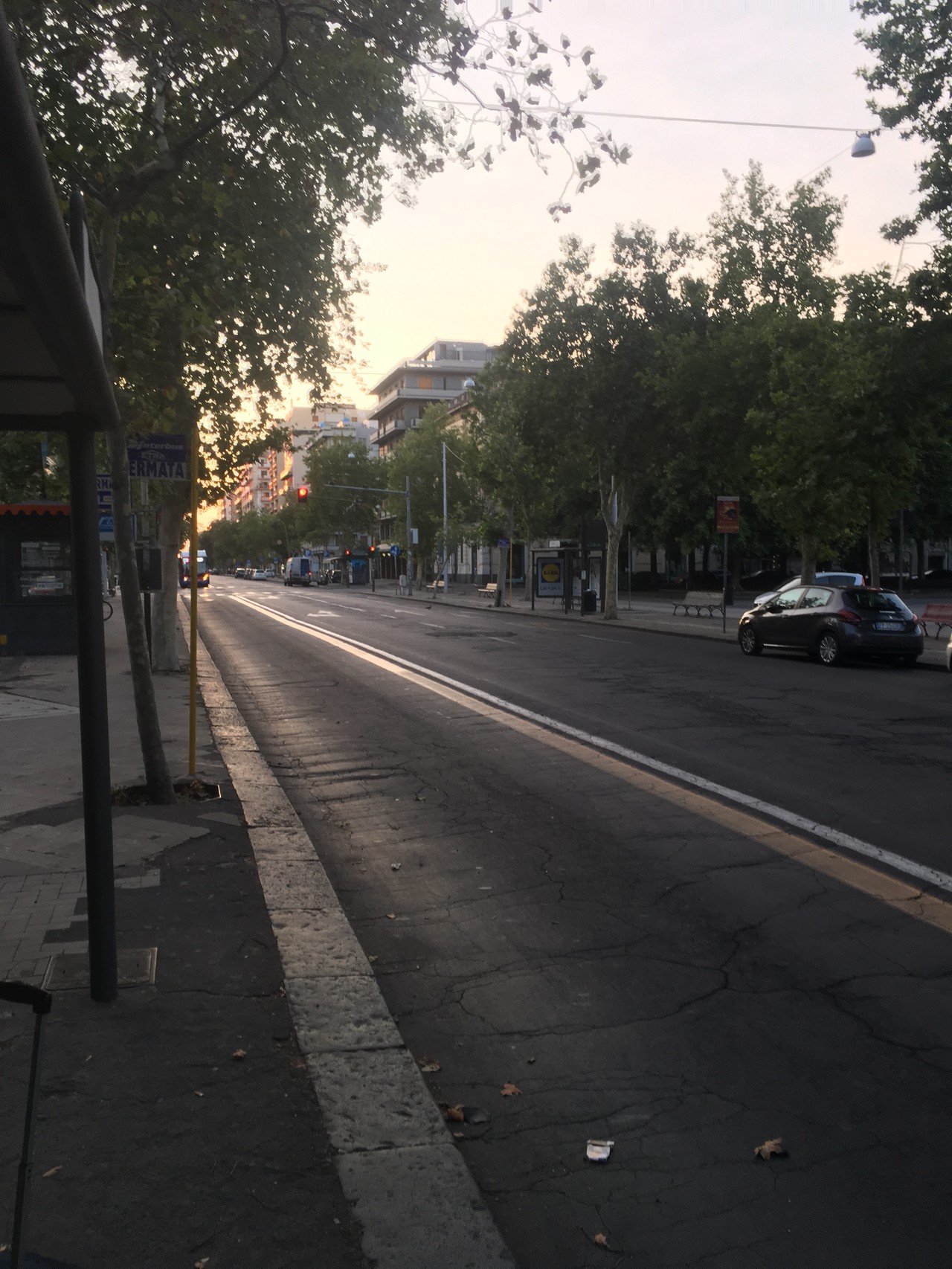 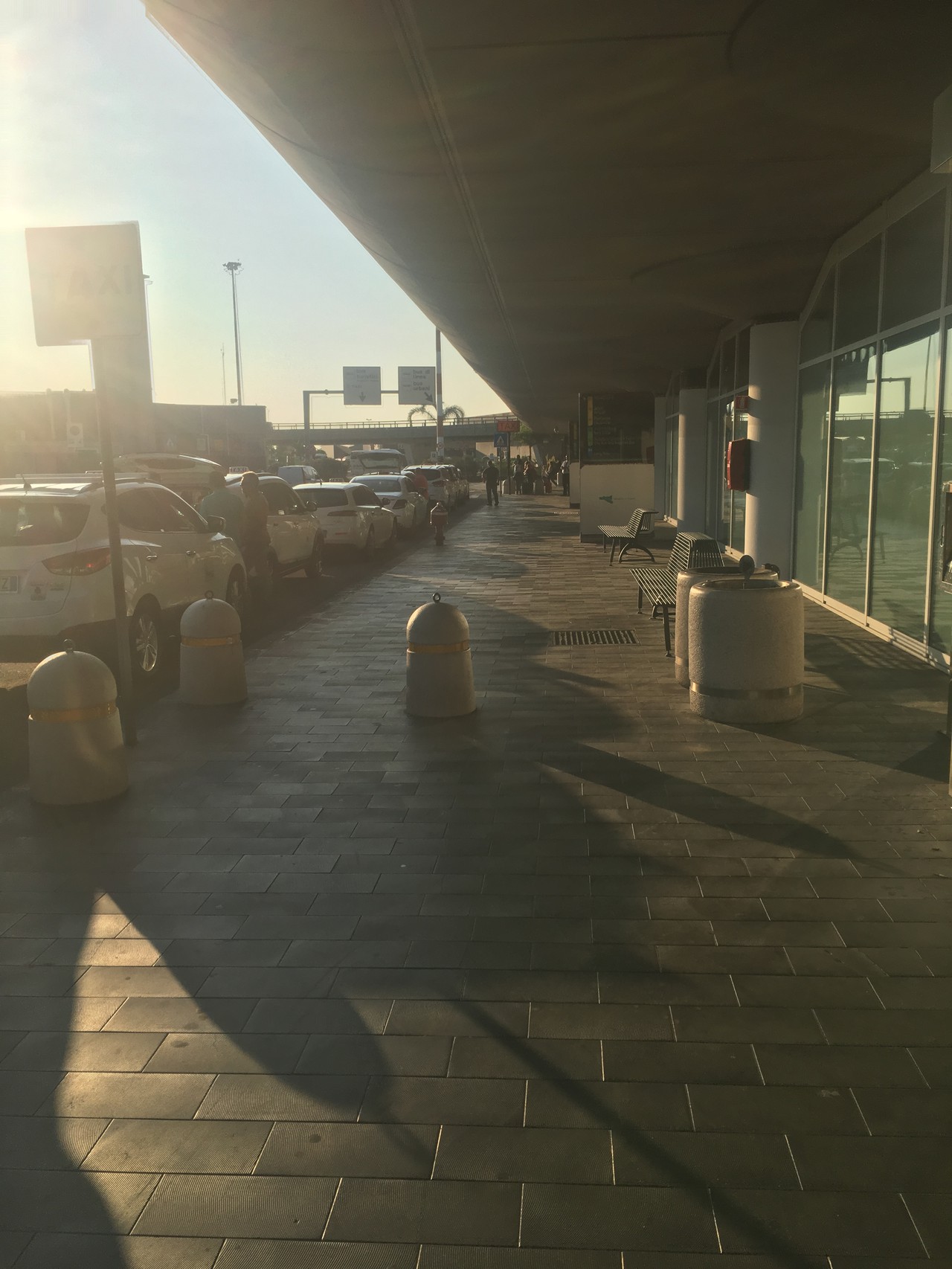 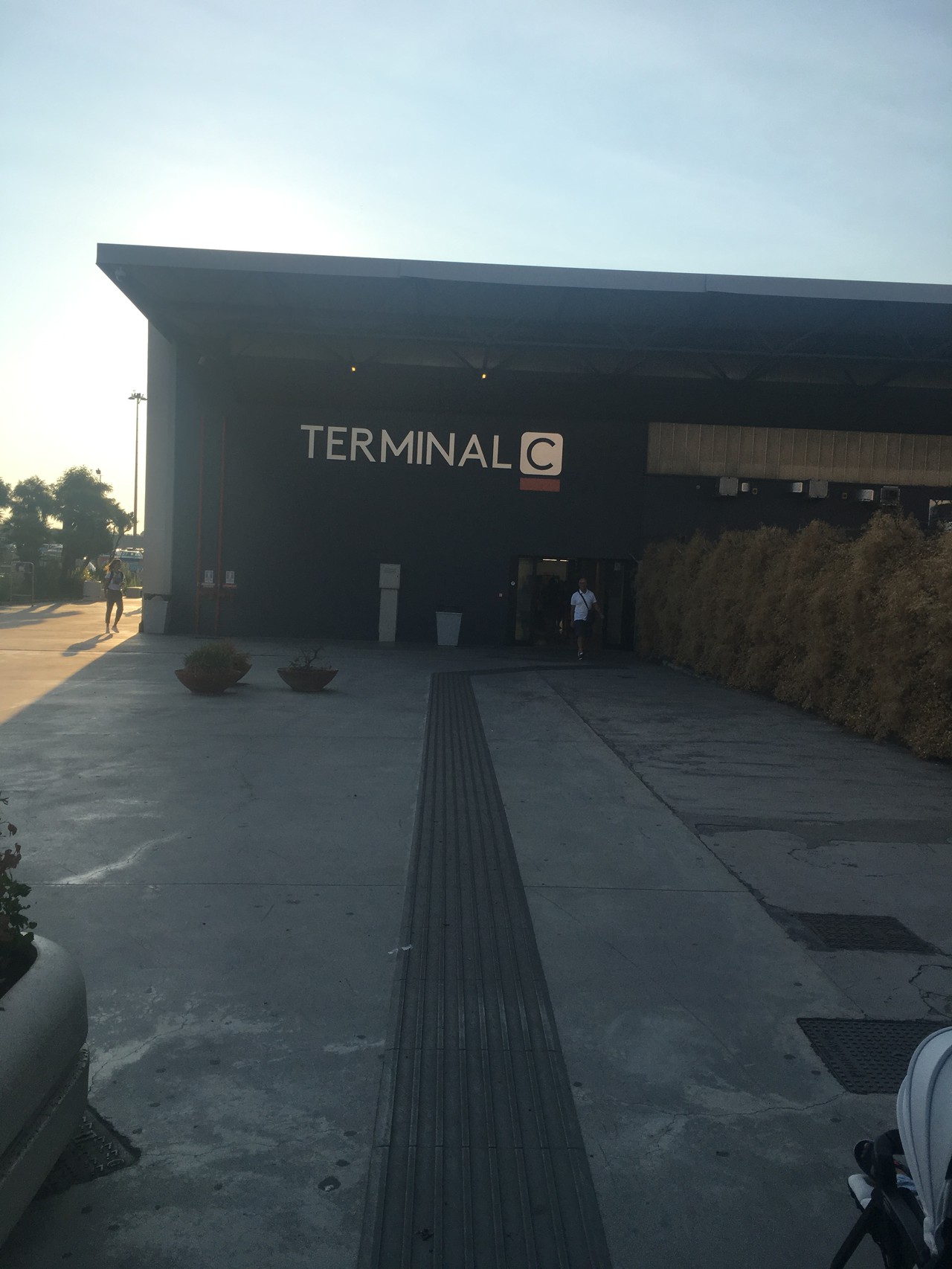 easyJet flies from Terminal C, its own mini terminal with 4 gates. The terminal is a several minute walk from the bus stop. I found Terminal C to be modern and clean but very small. Luckily easyJet has flights staggered well so only 2 flights are every departing within the same60-90 min window. Security had a dozen people in line and only one lane, but I was able to clear it within 5 minutes. A duty-free shop is right in front of you as you exit security. You take a right turn and within 50 feet end up in a large waiting area for the gates C1-4. A small shop is at the back, but it was disorganized as only one person seemed to be helping with what seemed to be a full plane load of customers. 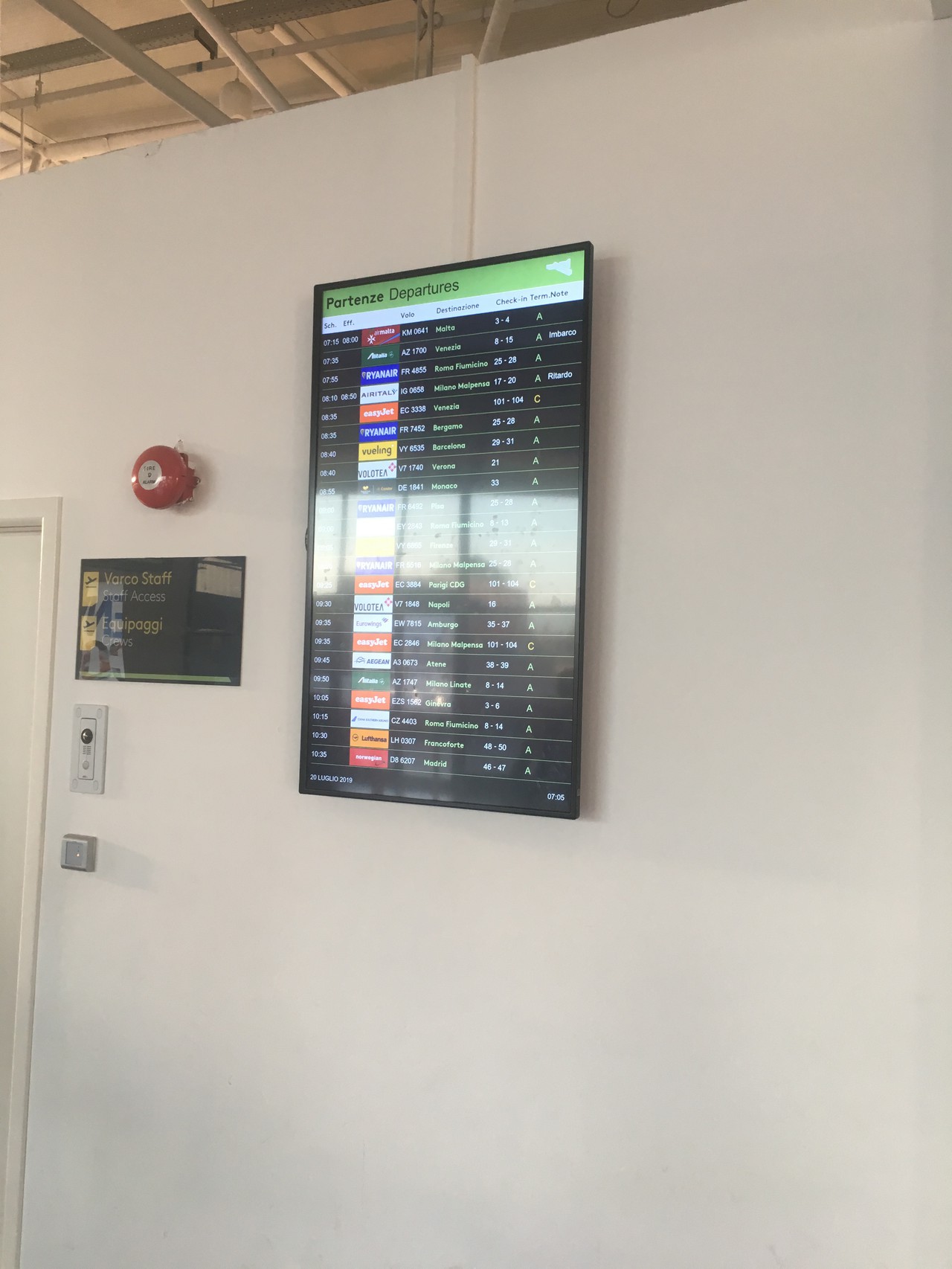 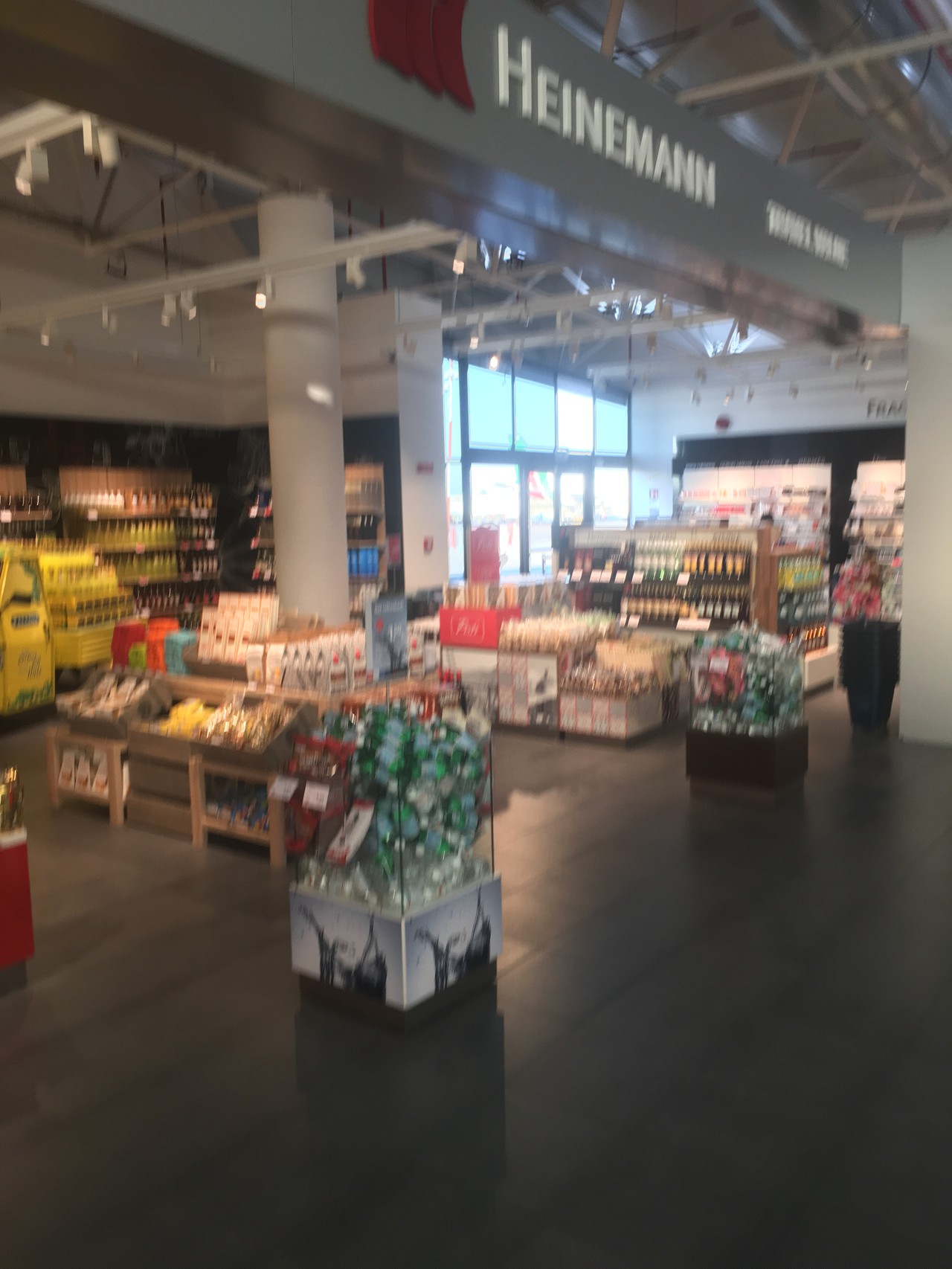 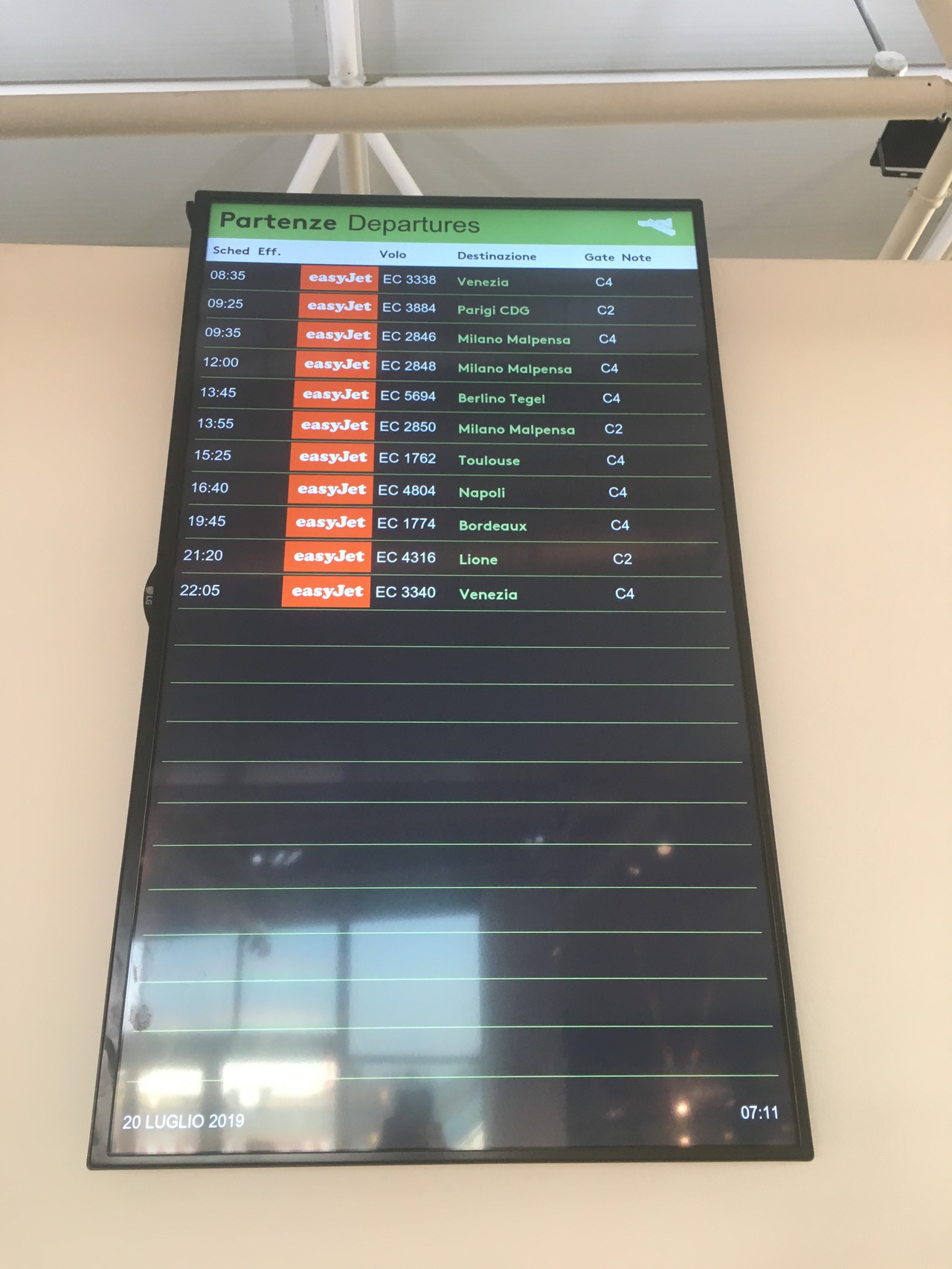 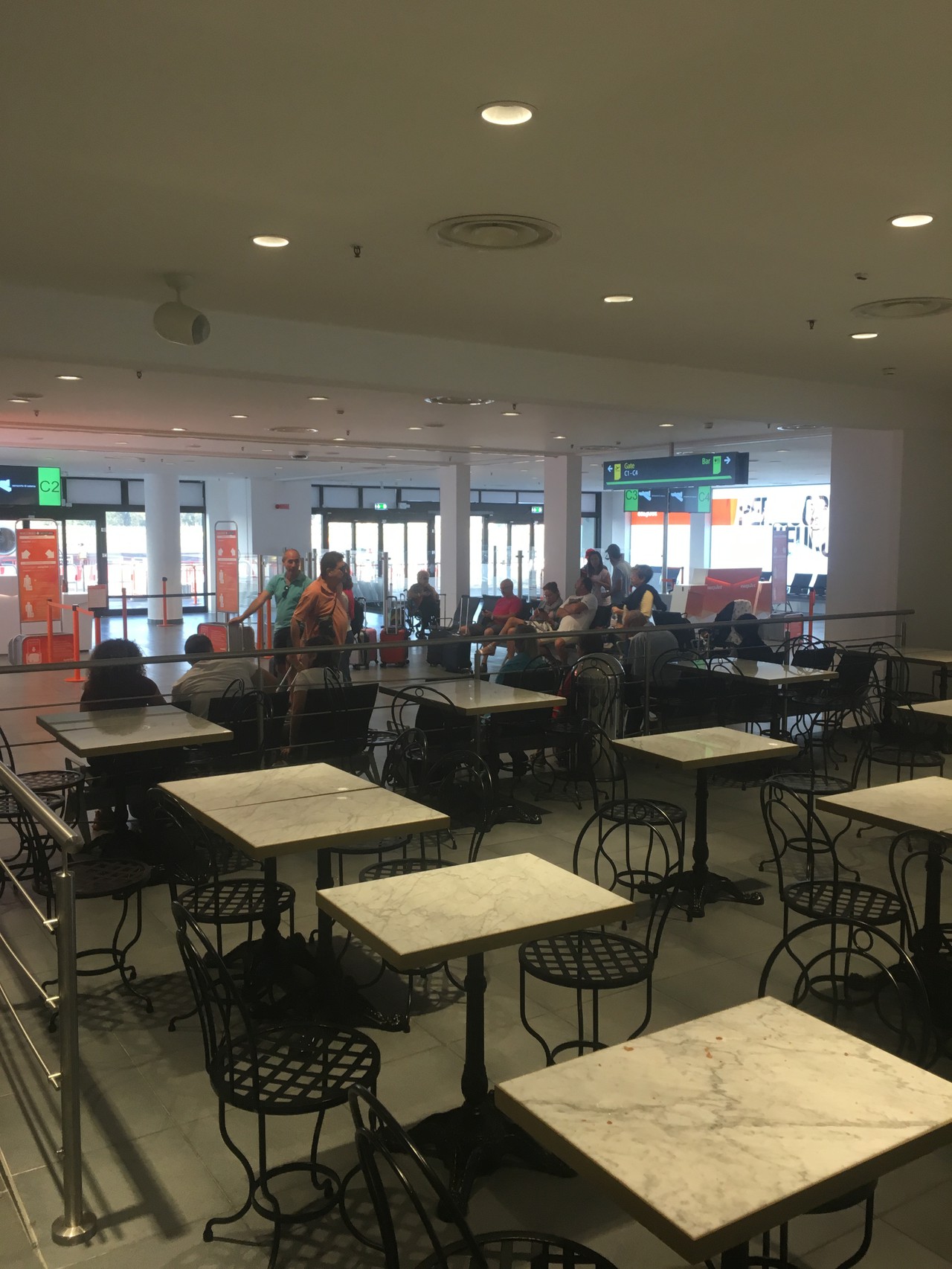 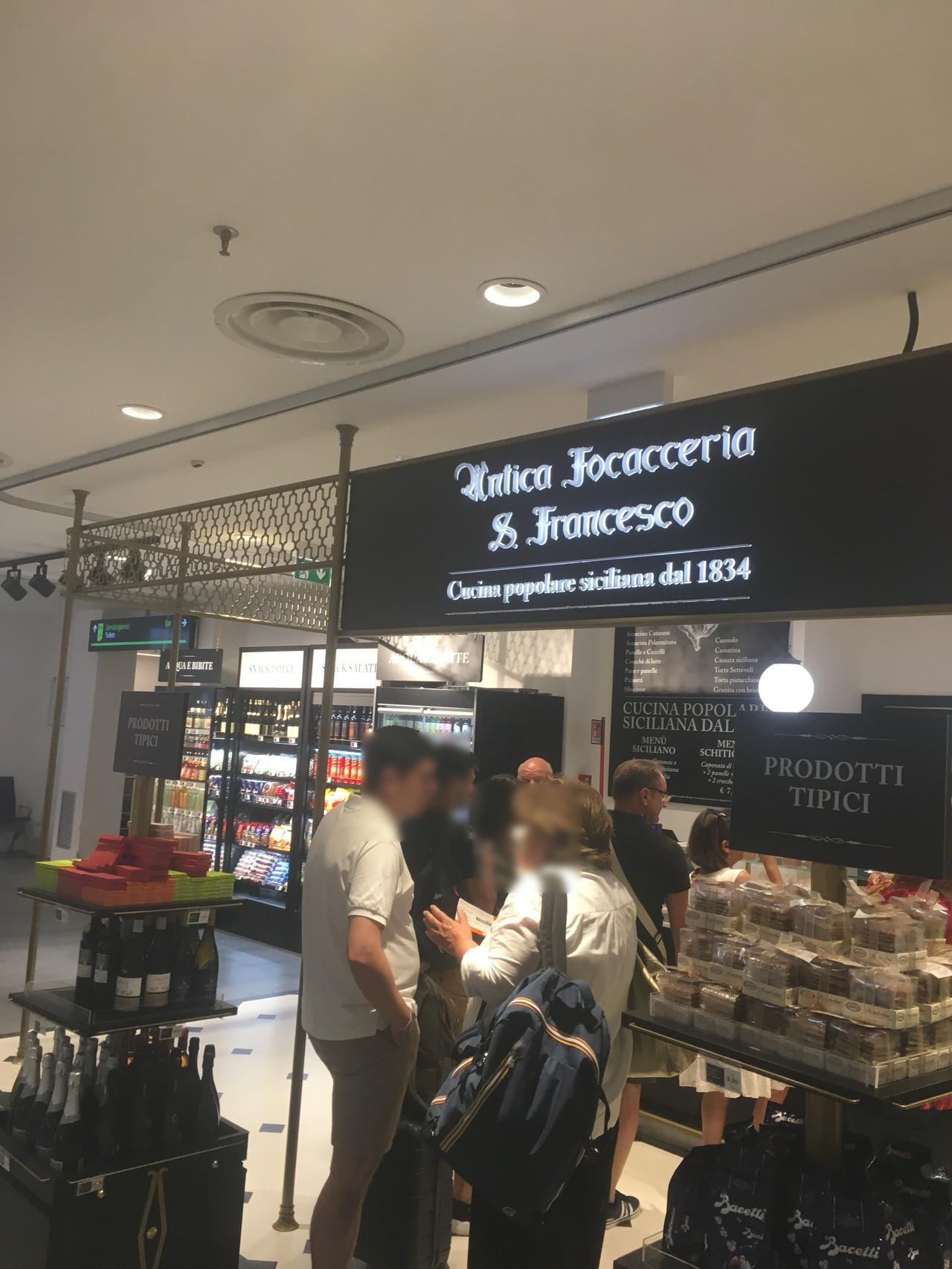 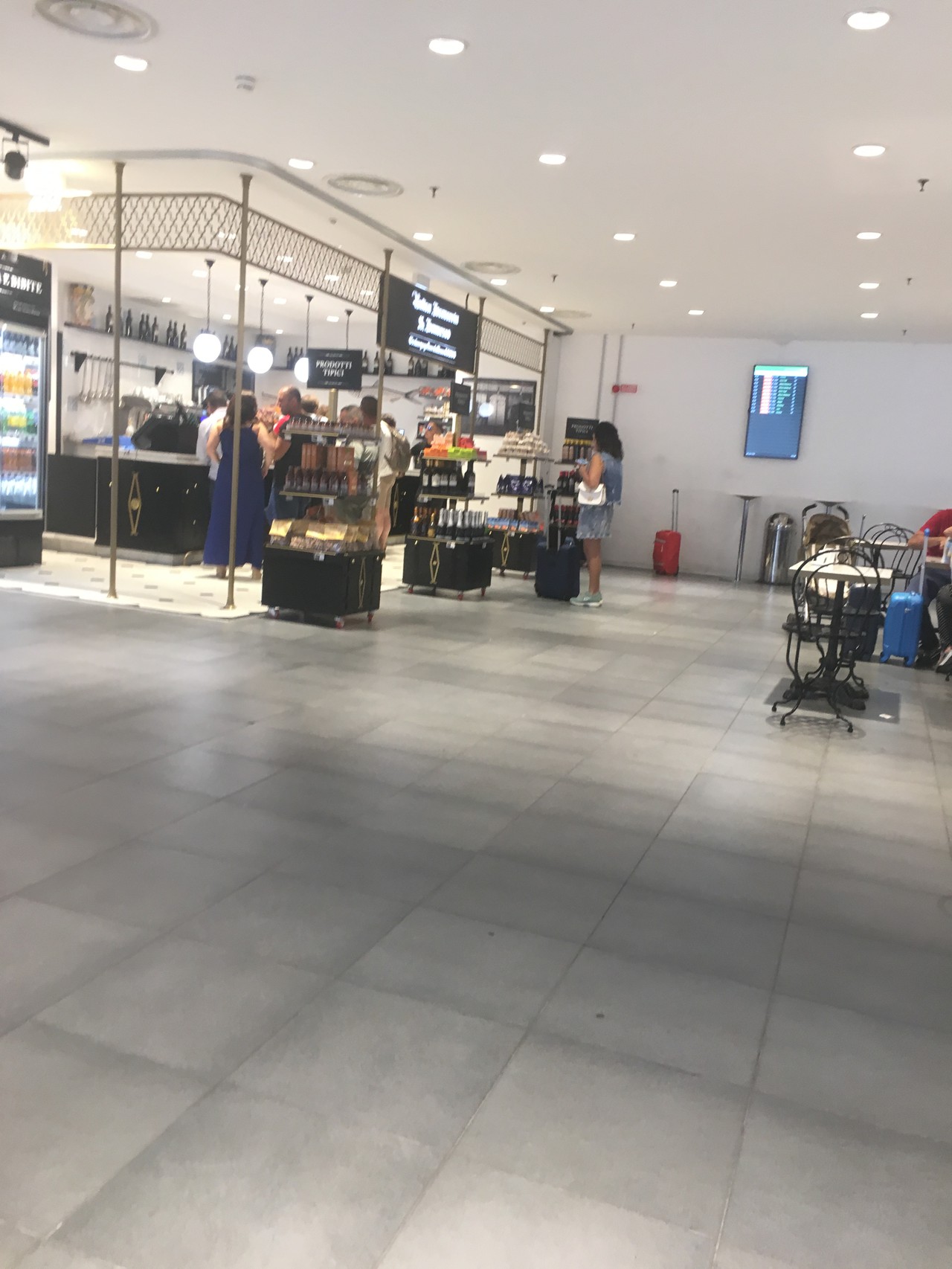 No wifi in Terminal C ☹. So, I used a little data to check my flight and guess what? Delayed. The bird taking me to CDG was having issues leaving CDG. Come to find out it was due to activity from Mt. Etna. It appeared normal to me but evidently it was giving off potentially hazardous ash, so CTA had a ground stop that morning that caused delays everywhere. Once airborne it appeared, I was staring at around 1-hour delay. Not too big of deal but hoping for a bit less if they make a quick turn around on the ground. 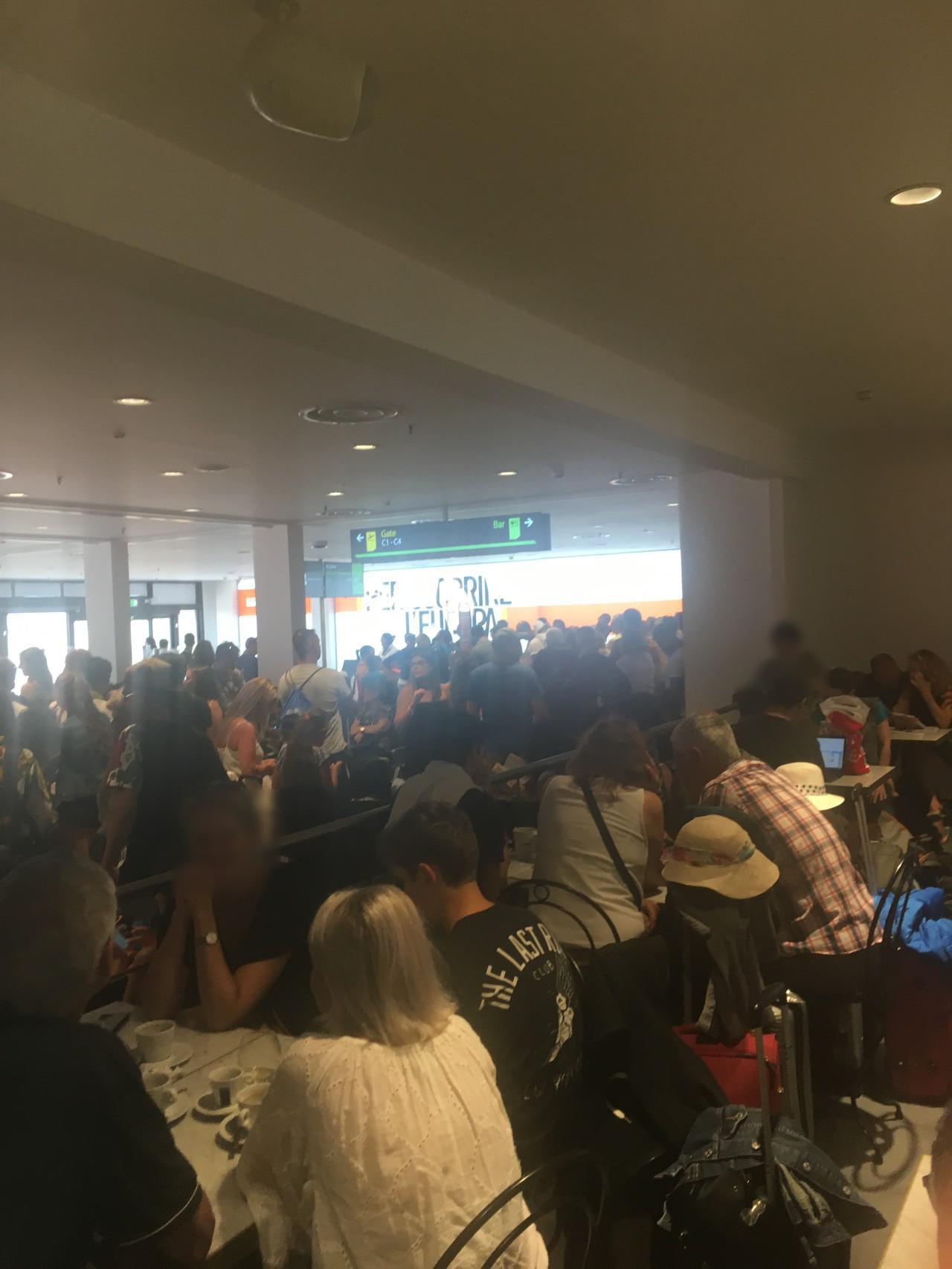 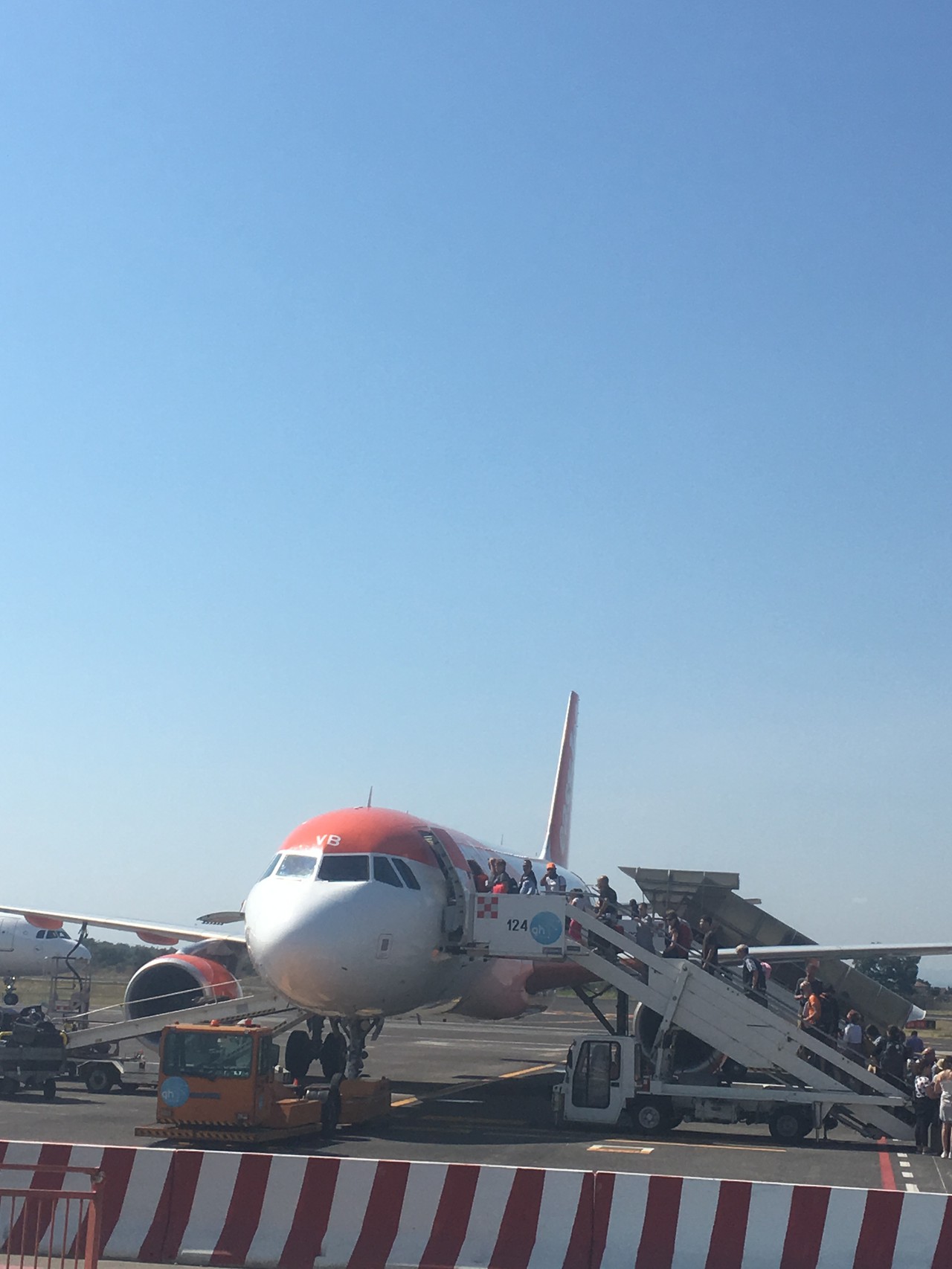 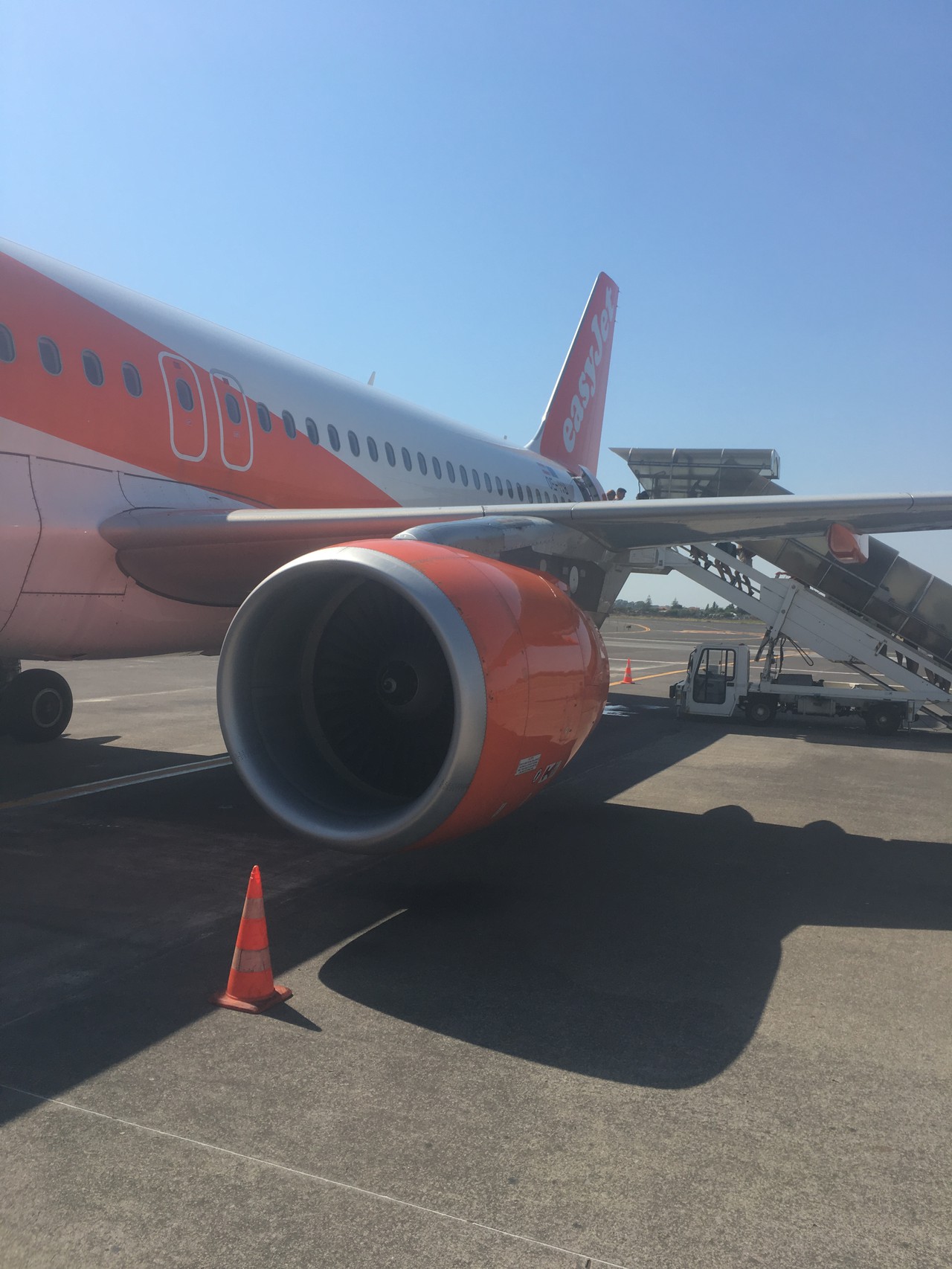 Gate lice began lining up an hour before departure. They must not know that departure is really two hours away as the FIDS inside Terminal C have yet to change. Come on easyJet tell everyone!

At 8:38 the FID updated to delayed till 10:10. If this is true departure then we may stand a chance to get in only half an hour or so behind schedule with some luck. The number of gate lice then reduced by a lot. Terminal C became very crowded as two flights were delayed. 360ish people are a lot in a small space, not ideal.

9:48 we started board, or well the process of boarding. The inbound plane had just arrived. Finally, at 10:12 actually boarding began and since everyone was already in holding pins, boarding was complete at 10:24 by using both front and back doors.

The colors on this craft were muted, more so than I’ve experienced in the past. More grey than orange. The seat, made by Ricardo, was ok, it’s what I expected. It was already pre-reclined so no additional reclining was going to happen. A coat hanger was present on the front. The seats did show some wear and tear as multiple seat pockets were hanging on by a thread. 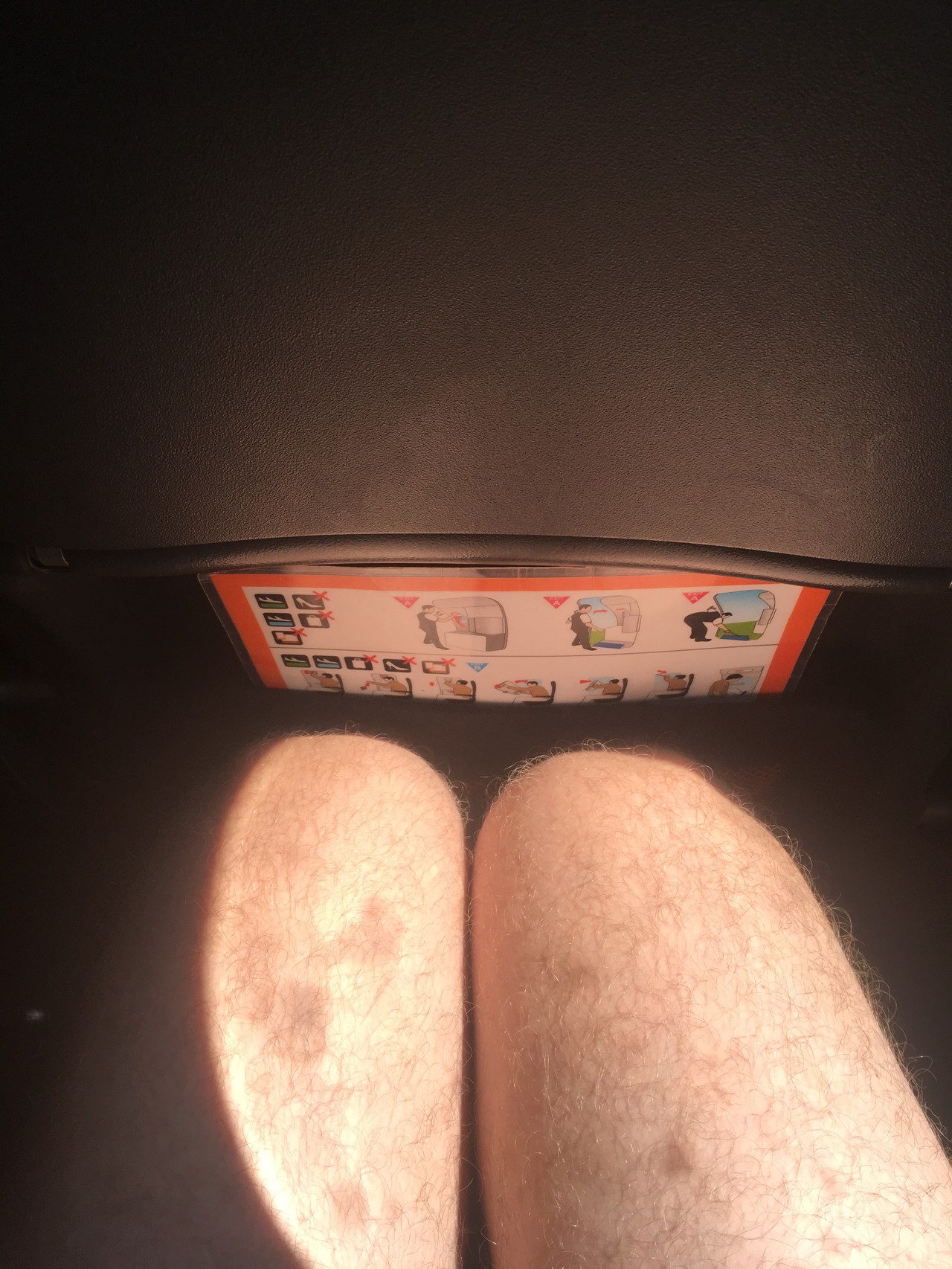 On this flight per standard, no IFE, wifi or plugs. The seatback pocket had a safety card, duty free magazine, BoB “Bistro” and a rather large easyJet magazine that helped pass the time. The DEF side of the aircraft was treated to great views of the Italian coast and the Alps.

BoB began around 45 minutes into the flight, near Rome, and finally reached me around 15 minutes later. I was one of the last served, as they start with one cart at the very front and one in the very back, and as a result the only food option left was Meze box consisting of chips, hummus, baklava, olives, and a red pepper sauce. It was ok for the price. To my surprise you did receive a large bottle of water for EUR 2.50 which isn’t terrible. This was the only BoB service for the flight.

The FA were ok. They didn’t seem to happy but maybe the delay put them in a foul mood

At 10:34 we pushed back and after a speedy taxi, wheels up towards the ocean at 10:44. We took a route that followed the coastline of Western Italy and then over the alps and the Geneva area before decent into Paris. 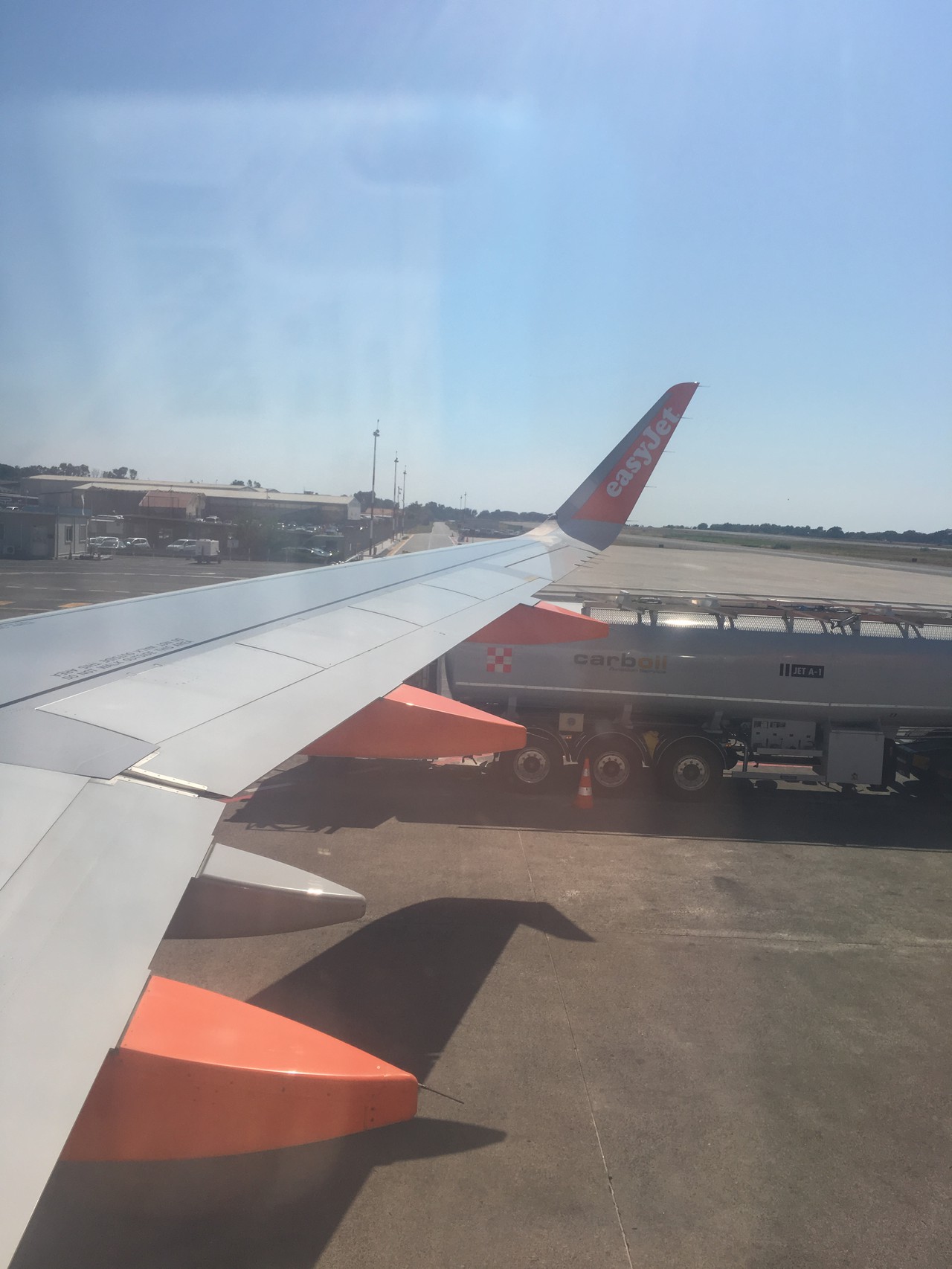 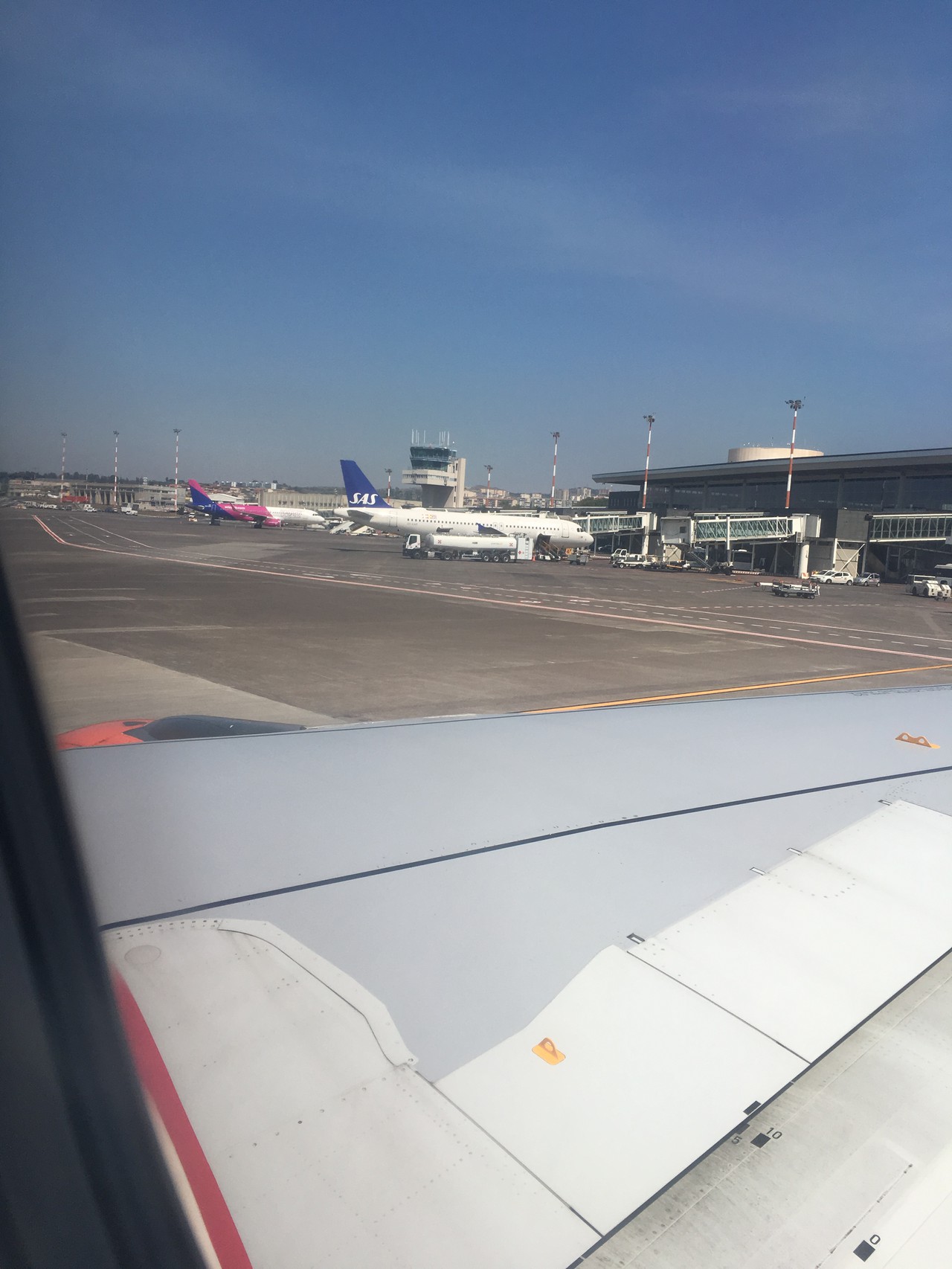 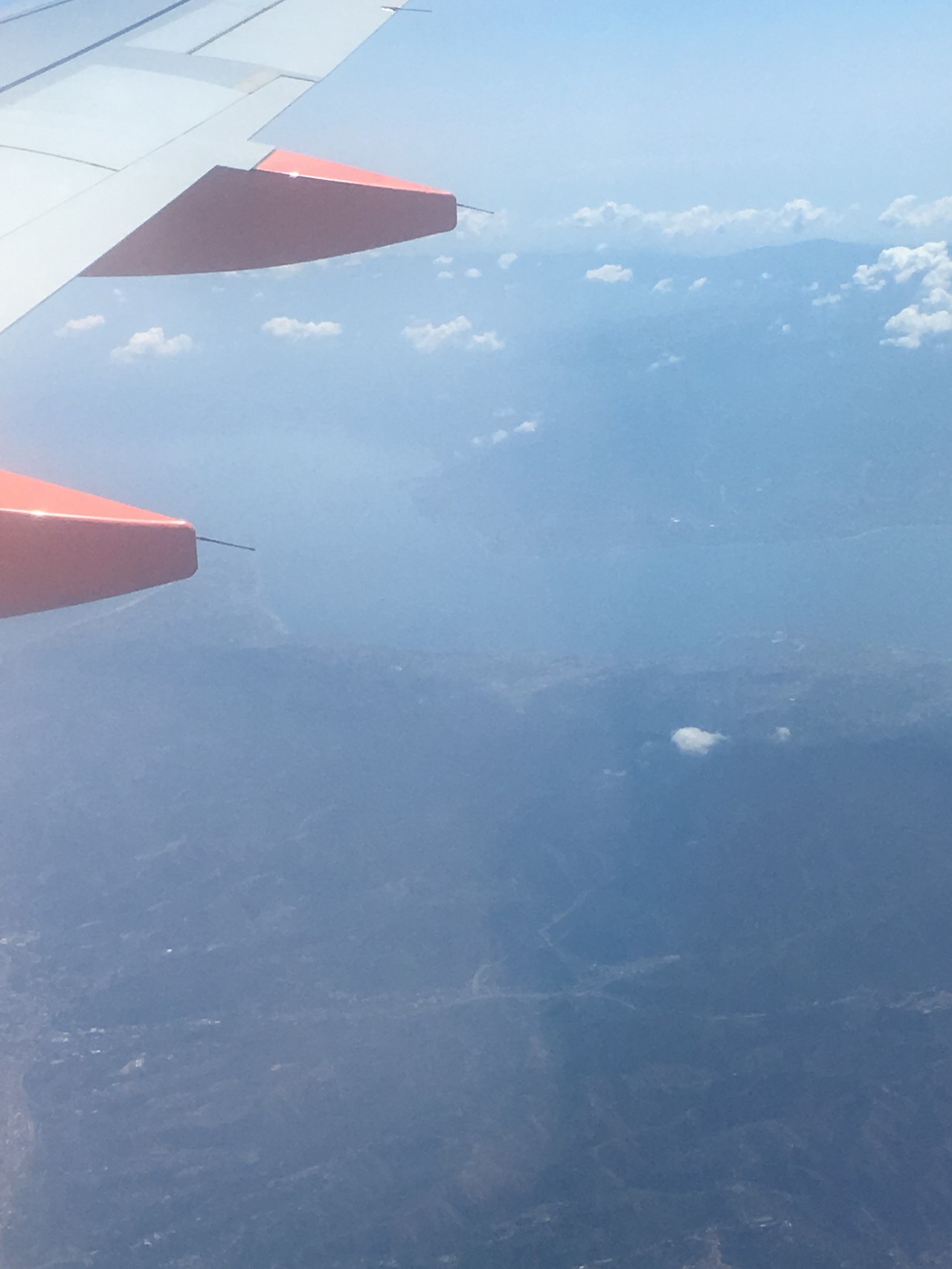 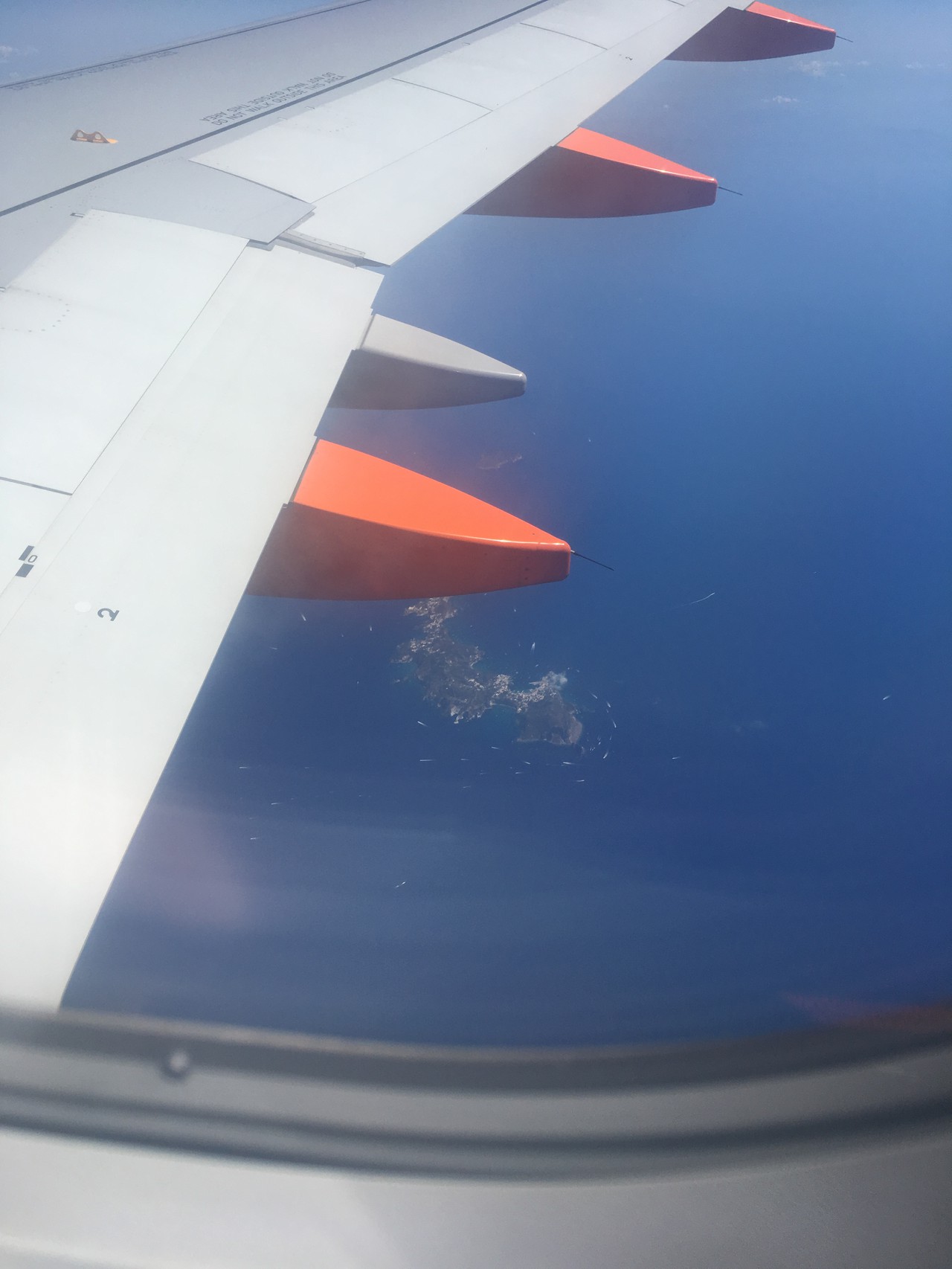 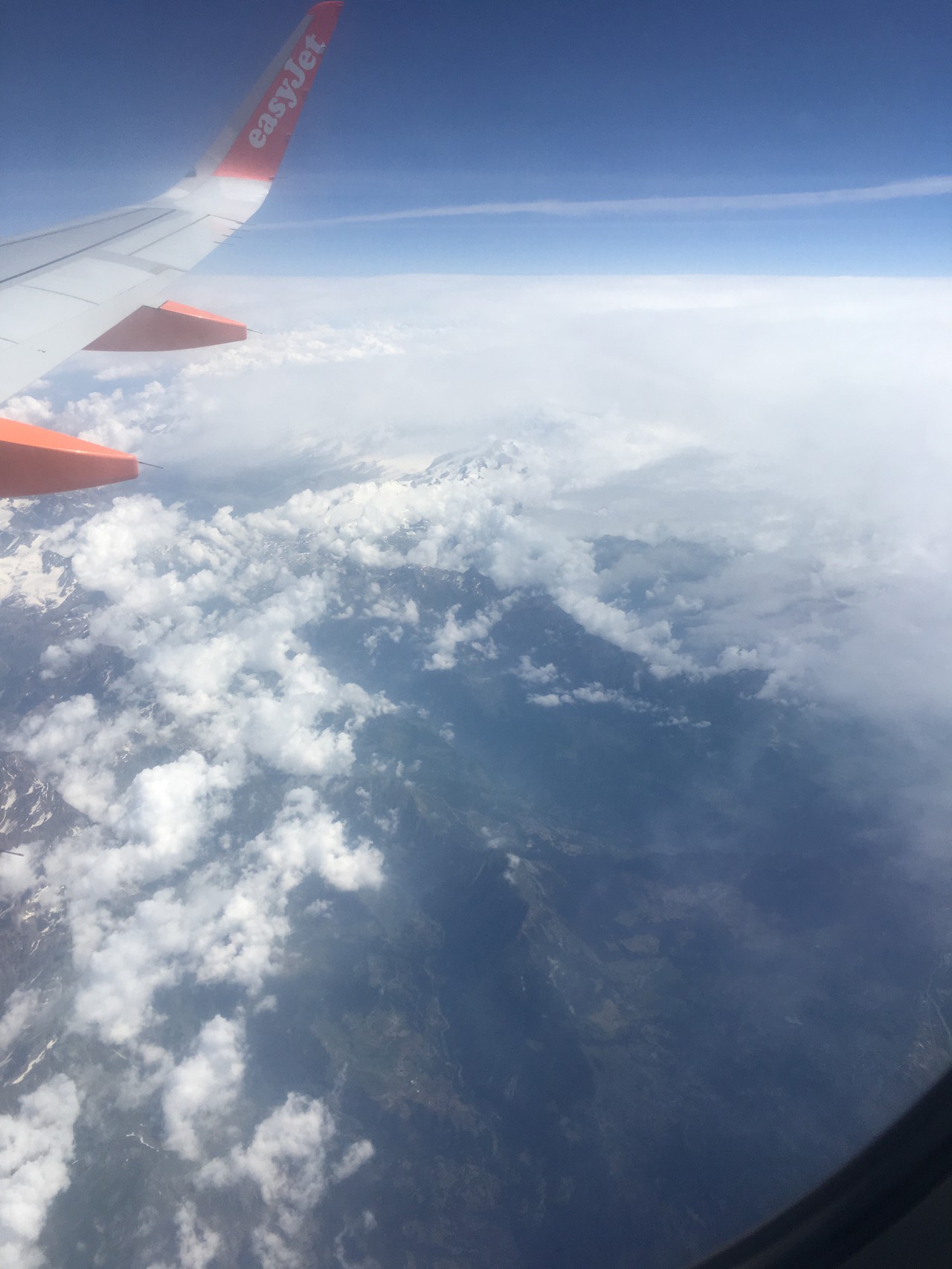 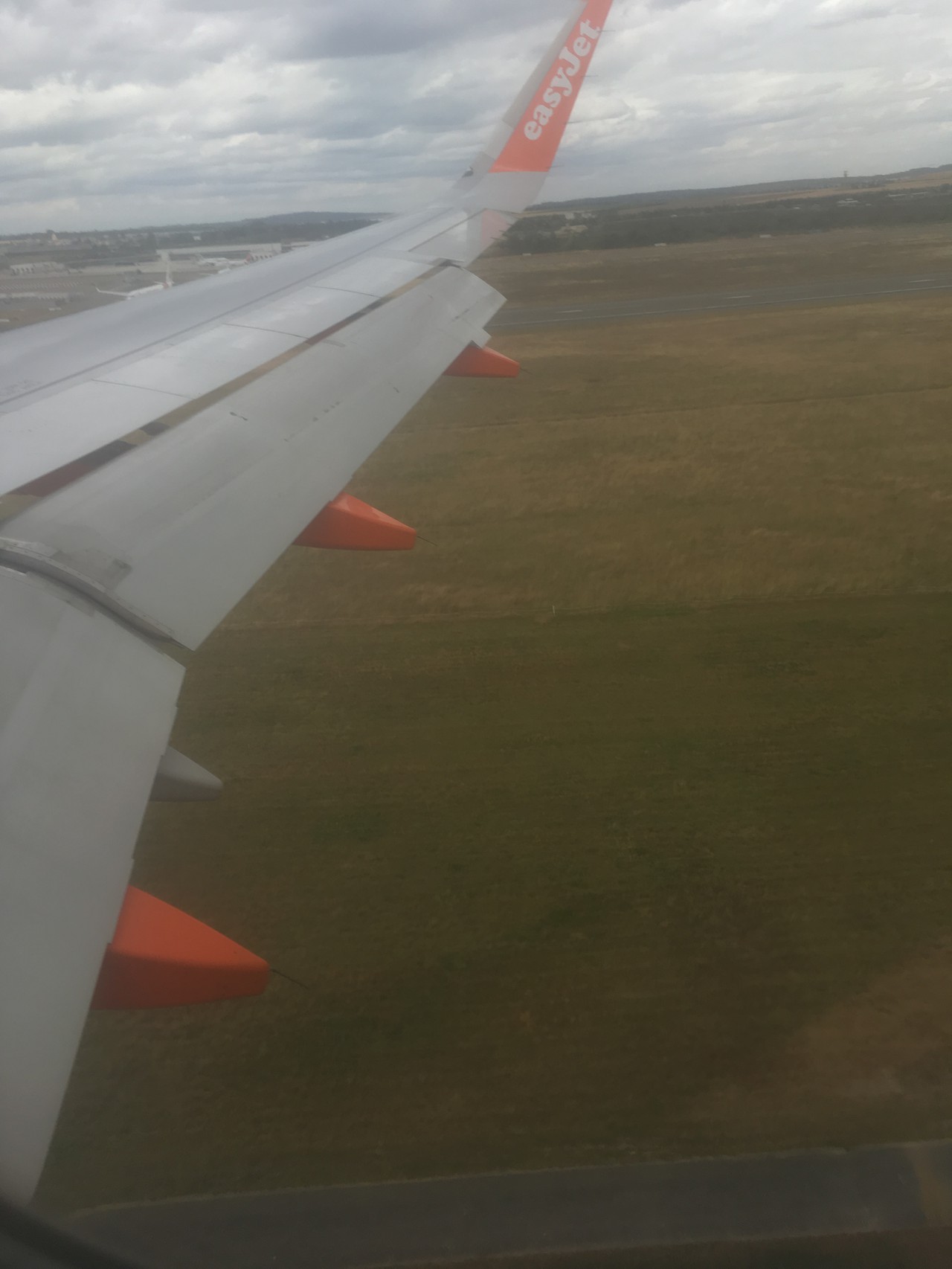 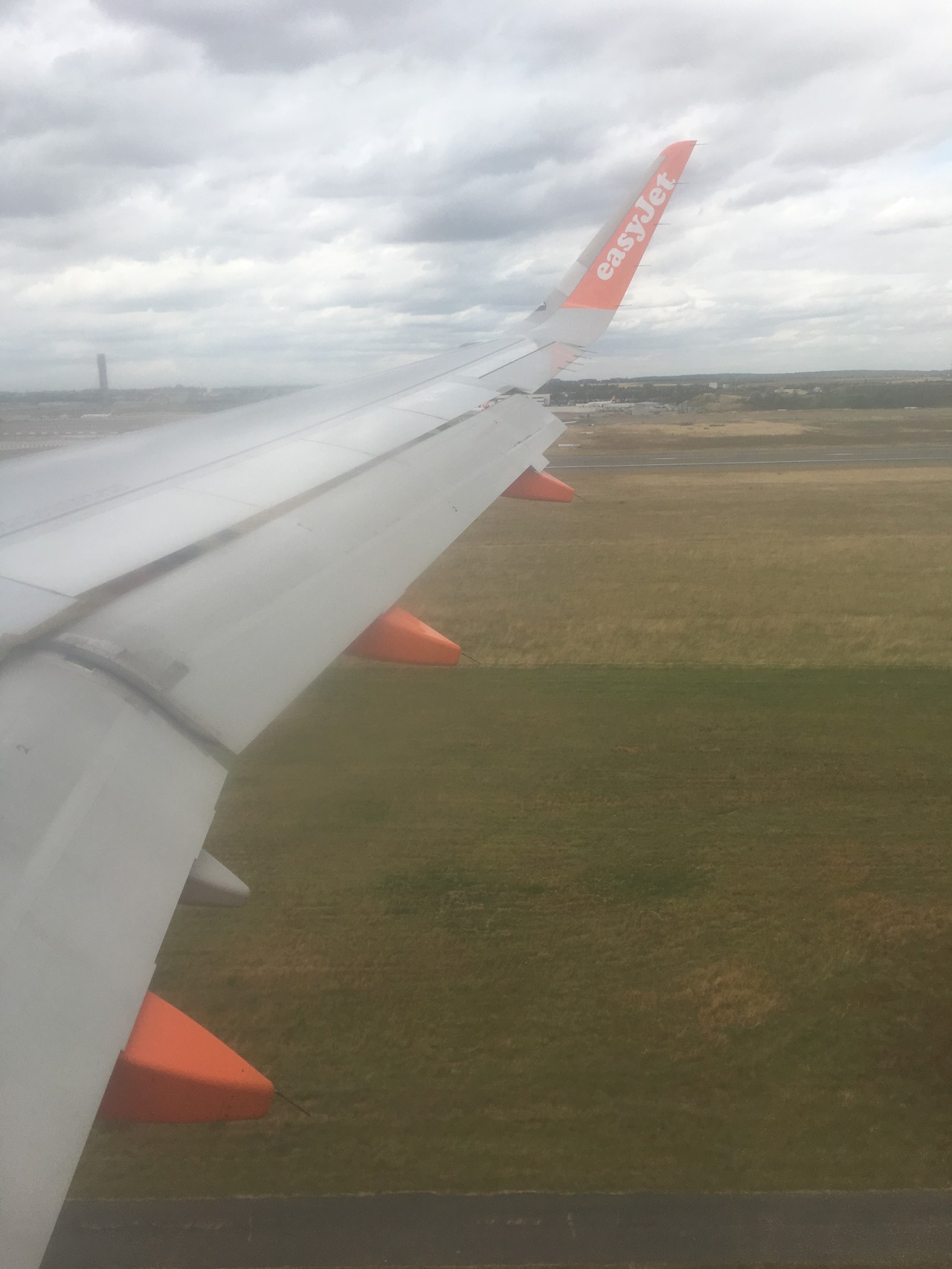 At 10:34 we pushed back and after a speedy taxi, wheels up towards the ocean at 10:44. We took a route that followed the coastline of Western Italy and then over the alps and the Geneva area before decent into Paris. 1:09, touchdown after a very bumpy approach. We parked at D16 8 minutes later we deplaned via the back stairs and a jet bridge.

Thank you for traveling with me! Next week, I have a LUX-MUC and MUC-CLT with both being in business class, so stay tuned!

This was not the best easyJet experience that I have had. I do not blame the delay on them. The fact that the only food option left when the cart got to row 19 was a snack box is not great, but slightly understandable as they do not restock in CTA. A faster beverage service and a 2nd drink only service would have been nice on a flight of this length.

I would fly easyJet again. This was a standard flight on a LCC. I was transported safely from point A to point B and that is all that matters and the price was good too :).

The contributors of Flight-Report published 5 reviews of 2 airlines on the route Catania (CTA) → Paris (CDG).

The average flight time is 2 hours and 44 minutes.

He wrote 32 reviews about 10 airlines and 23 airports.