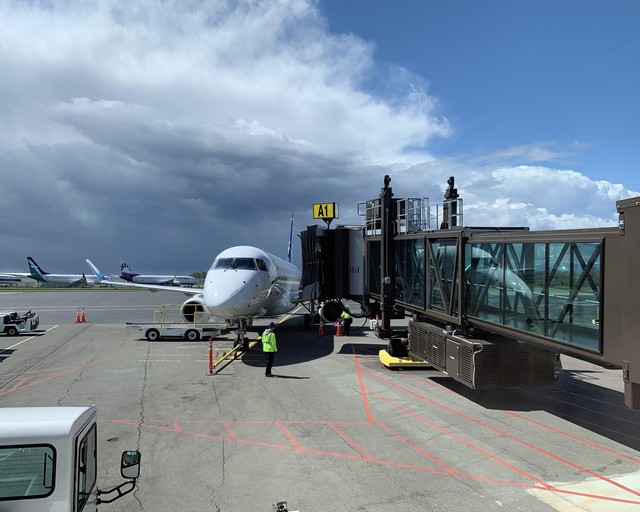 Welome to my Alaska Airlines Trip Report down to Portland, OR for the afternoon. This is my first trip report up here, accompanied by the video until I can learn to take more pictures on my phone during the flight ;). I hope you enjoy, thanks so much!

As Alaska Horizon (AS/QX) recently started flights from Paine Field (KPAE) in Everett, WA (the same field where the Boeing 747, 777, and 787 are currently produced) back in March 2019, I took advantage of their cheap ticket deal for day-of round-trips to experience the new terminal at Paine Field, and Horizon's E175 regional aircraft.

The Paine Field terminal, roughly 30 minutes from Seattle is designed to be a regional alternative airport from Seattle-Tacoma International (KSEA) located in Tukwila. Featuring business-style amenities, such as valet parking and premium location parking, the terminal gives off the "premium" experience from the beginning.

The new terminal at Paine Field is just over 30,000 square feet in size, including two gate areas, two jet bridges and one hardstand (air stair) gate, as well as food vendors, baggage claim, and even a dedicated TSA PreCheck lane during peak travel periods. 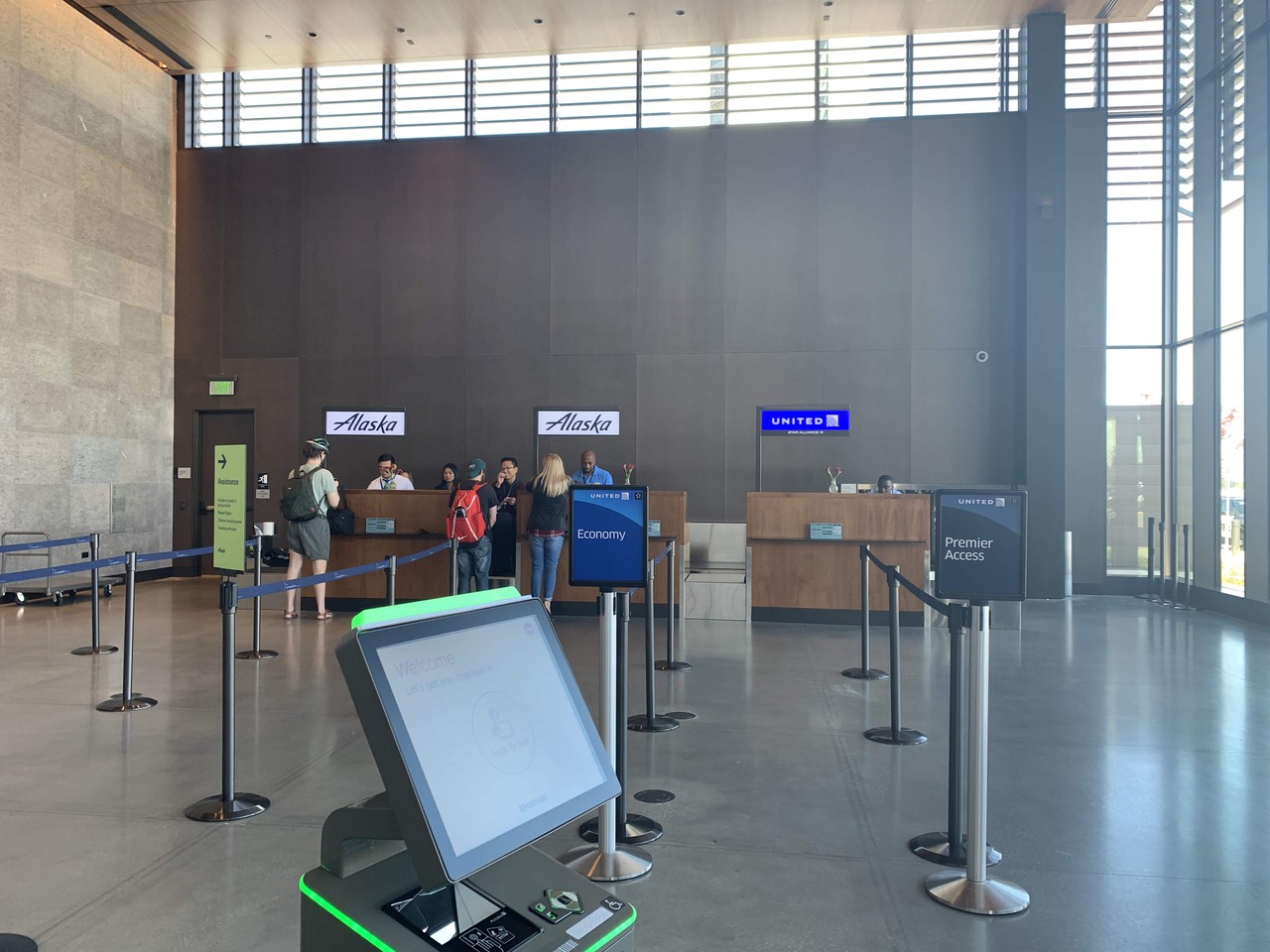 The Check-In Area currently has three agent-served check-in and baggage drop (generally two for Alaska, and one for United) as well as six self-service kiosks for check-in, printing boarding passes and bag tags, and for changing flights and seat assignments. Currently six check-in kiosks are activated in the terminal, with the space capable of handling six additional kiosks as needed, for a total of 12. 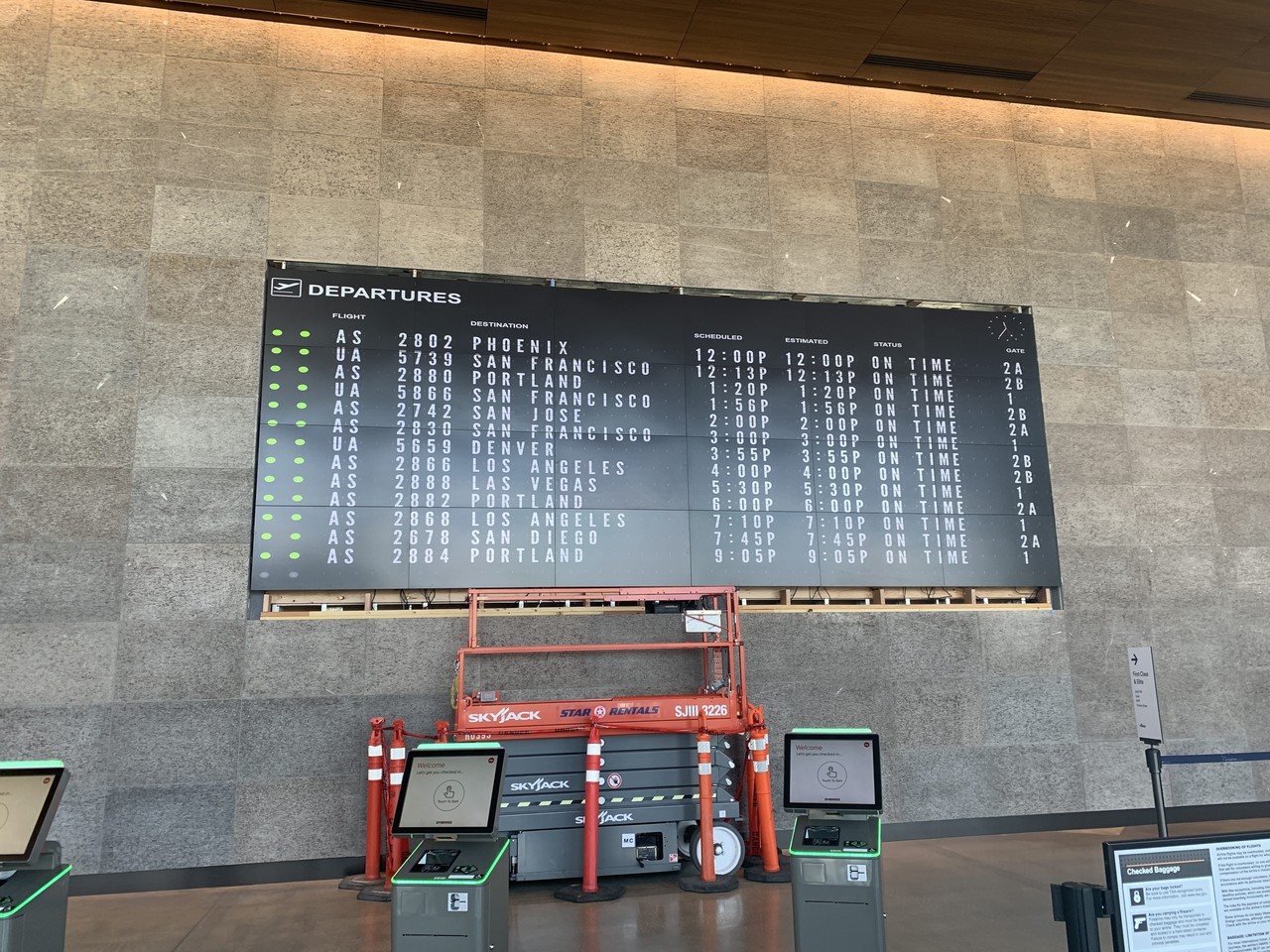 TSA Security took a mere two minutes, I did not have TSA PreCheck for this trip, but definitely would not have needed it, arriving in advance like I did.

Post-security there is no dedicated lounge, like an Alaska Lounge or United Club at the airport, but since departures are often blocked together, a most of around 250 people will be in the terminal at any given time, far less than you will experience at SeaTac. I flew this flight just a couple weeks after a SeaTac departure (to Denver, on Alaska) and was amazed at how quickly I was able to park my car and be air side, in about 5 minutes, I was able to park, get my boarding pass, clear security and get a seat.

*the Beecher's Handmade Cheese was NOT open at the time of this flight report, but as of July 22, 2019, I can report that it has since been opened in the terminal. 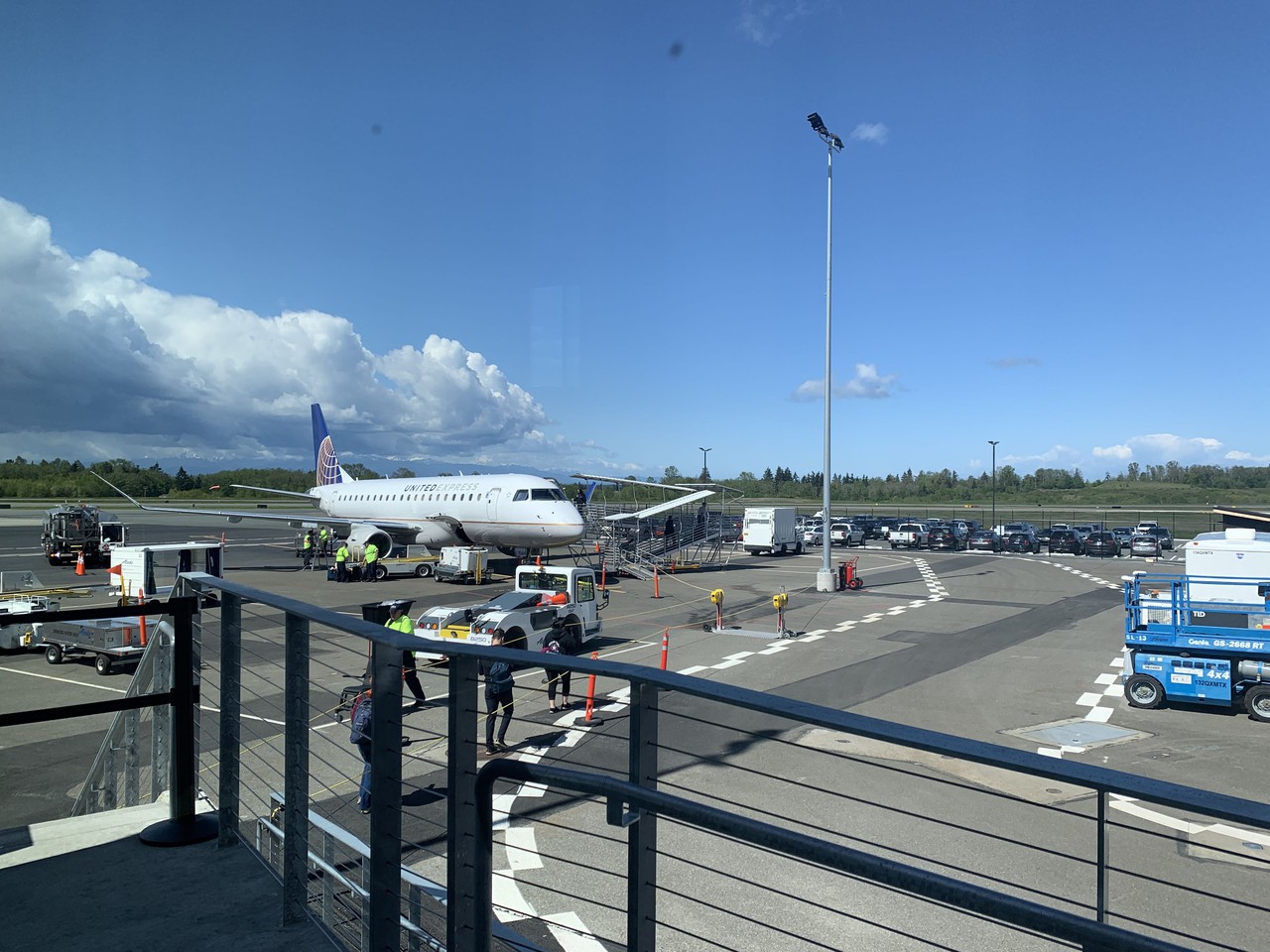 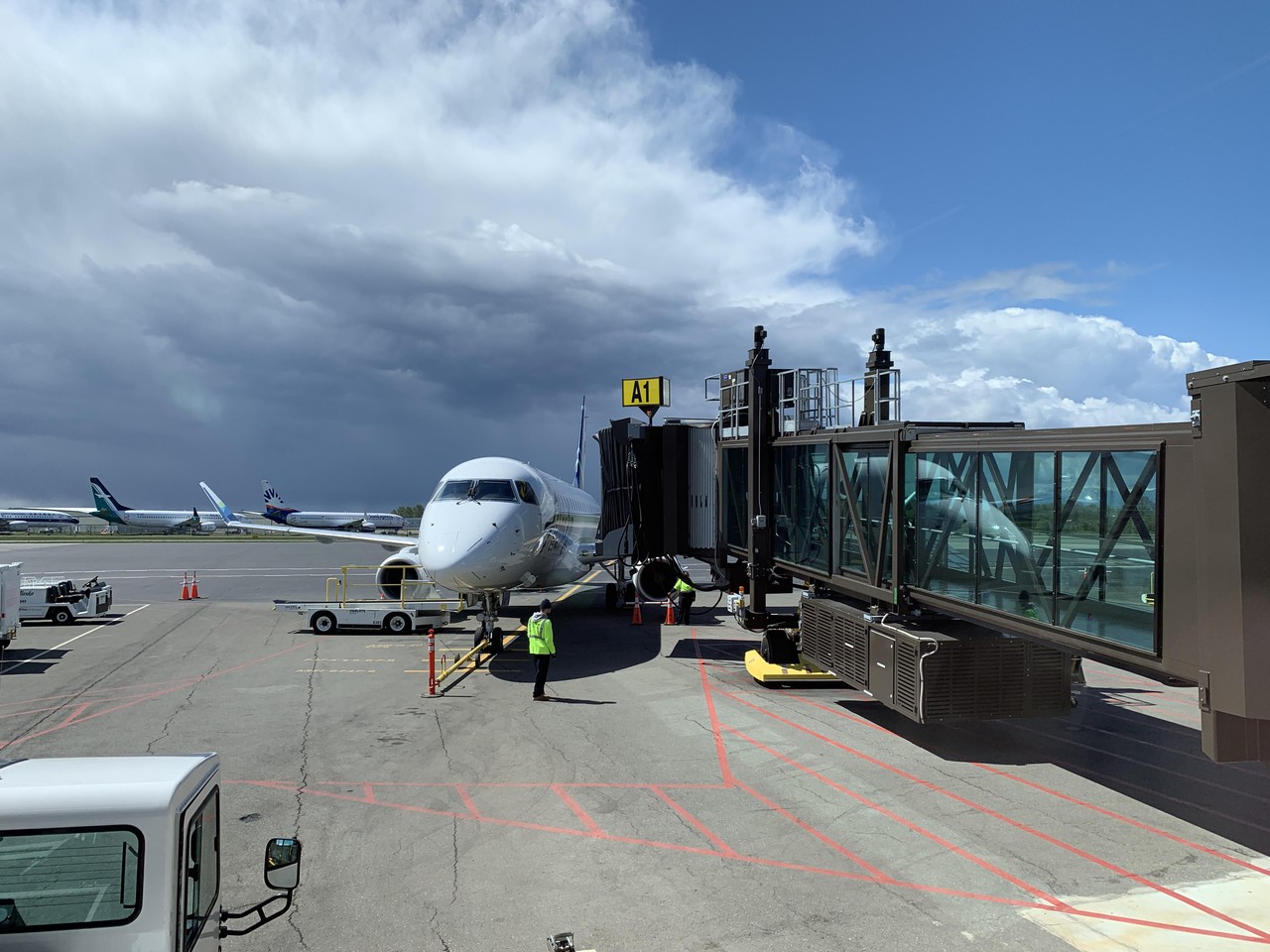 Alaska Horizon E175 (N647QX, delivered new 12/21/2018) arrives at Gate 1 from San Jose, CA (SJC); the glass jetbridges on both gates here at Paine Field really add an aesthetic that makes the terminal appear a lot more modern open, compared to those at SeaTac.

Since I am traveling in Alaska's Premium Class (rows 6-8), I received Group B boarding. Alaska recently overhauled their boarding process to streamline the experience and group passengers by where they are sitting, as well as to better separate premium and Mileage Plan passengers. Their current boarding system is as follows:
- Preboarding
- First Class *skip on the Q400
- Group A: Mileage Plan Million Miler, MVP Gold 75K and MVP Gold
- Group B: Mileage Plan MVPs and Premium Class *no premium class on the Q400
- Group C: Main Cabin (rear half)
- Group D: Main Cabin (front half)
- Group E: Saver Seats (basic economy)

I found the experience to be very streamlined and easy on the Embraer 175 compared to that on their 737s or Airbus aircraft, since the E175 only seats 76 passengers, and this flight was less than half-full anyways, so boarding commenced a few minutes late, scheduled for 12:40p, began at 12:50p, and took no more than ten minutes. For this short flight, I was seated in 6A, a "bulkhead" Premium Class seat, with no passenger next to me in seat 6B. This seat cost me $15 to select for this flight, in addition to the Main Cabin fare, and Premium Class seat selections from Paine Field can range from $15 to $55 (so I have seen, prices will definitely vary). 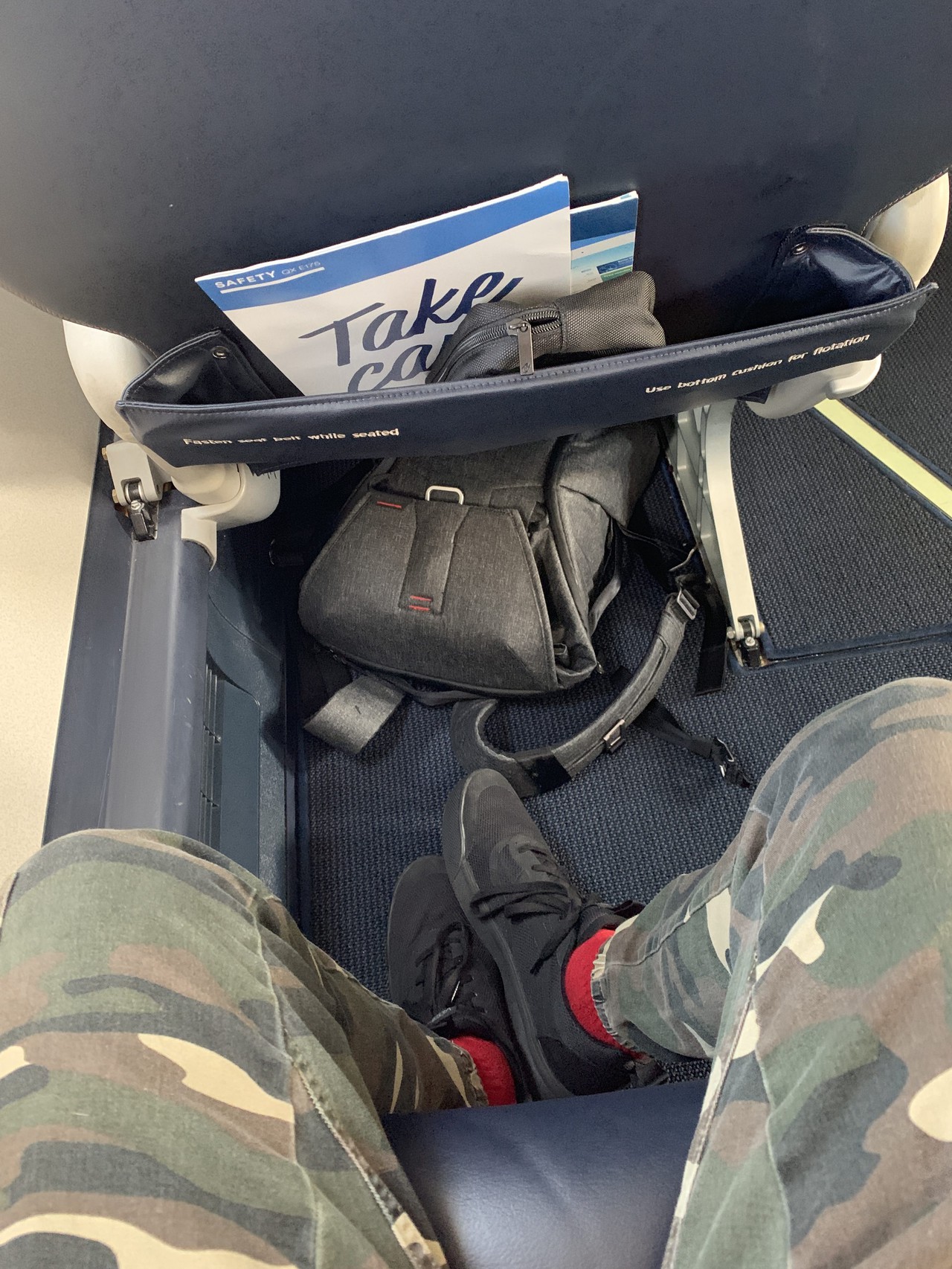 Legroom and underseat storage were definitely plenty for me in 6A, but be aware that the passenger seated in 6B, the seat does not have access to the storage underneath FC seat 4A, so you will need to store all of your baggage above you in the overhead bins. The seat [6B] does jut out into the aisle, as it twists to the left from First Class through to the rest of the aircraft so do be mindful of that if you have longer lest. I am only 5'6" (168cm) so this did not appear to be an issue for me at all.

Interestingly, the FA did not approve of me having my GoPro attached to the window during taxi or takeoff during this flight. Only explanation was, "I don't think you can do that on this plane". I didn't further inquire as to why. 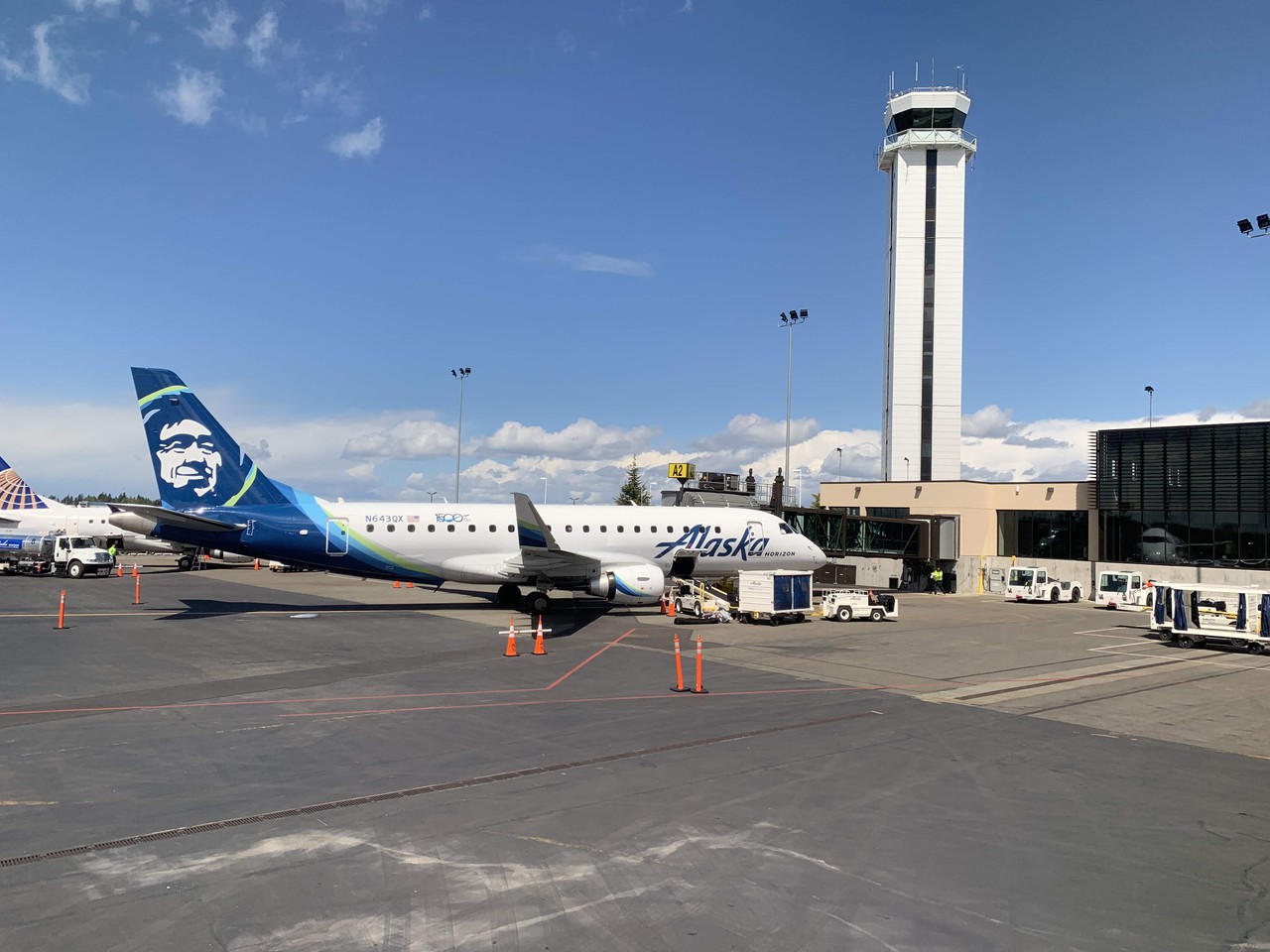 Beautiful shot of sister aircraft, N643QX loading for QX2742 at 2:00PM, just 40 minutes after our departure. 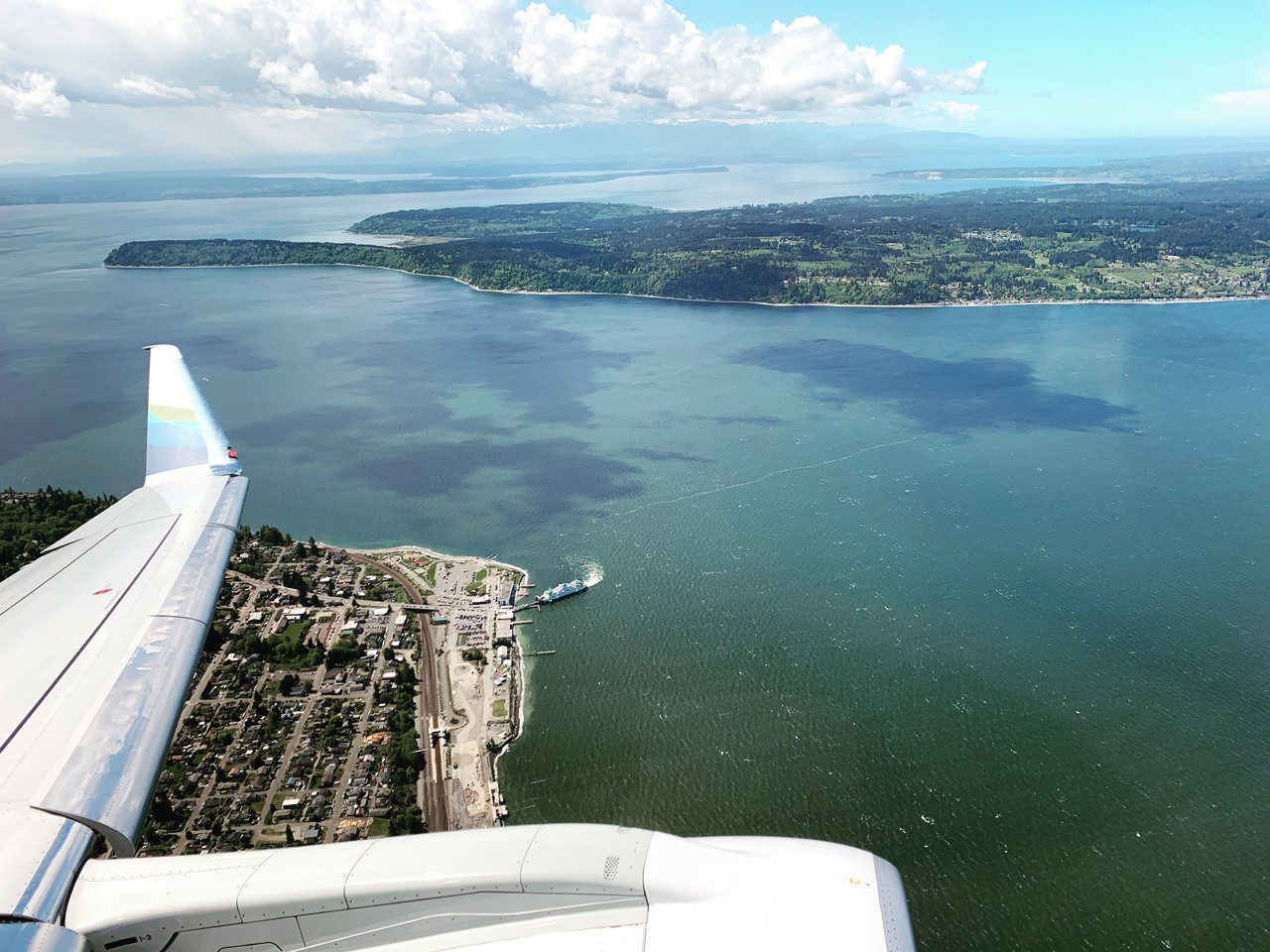 The powered-up left engine of our E175, and the Washington State Ferries "Suquamish" at the Mukilteo terminal as we climb away from Paine Field. The Mukilteo Station and new ferry terminal construction are visible immediately above the engine.

Since the scheduled flight time of this trip was only 45 minutes, the captain informed us that our "in-air" time would be about 30 minutes and that the in-flight service would commence, moments later to be delayed by turbulence in the area on the climb-out.

By the time the service started, there were only a good 20 minutes of flight time left anyways. The options were very simple: water or orange juice, and a Biscoff Cookie. The in-flight service is featured in the video, as unfortunately I did not get any photos of that on the way down. 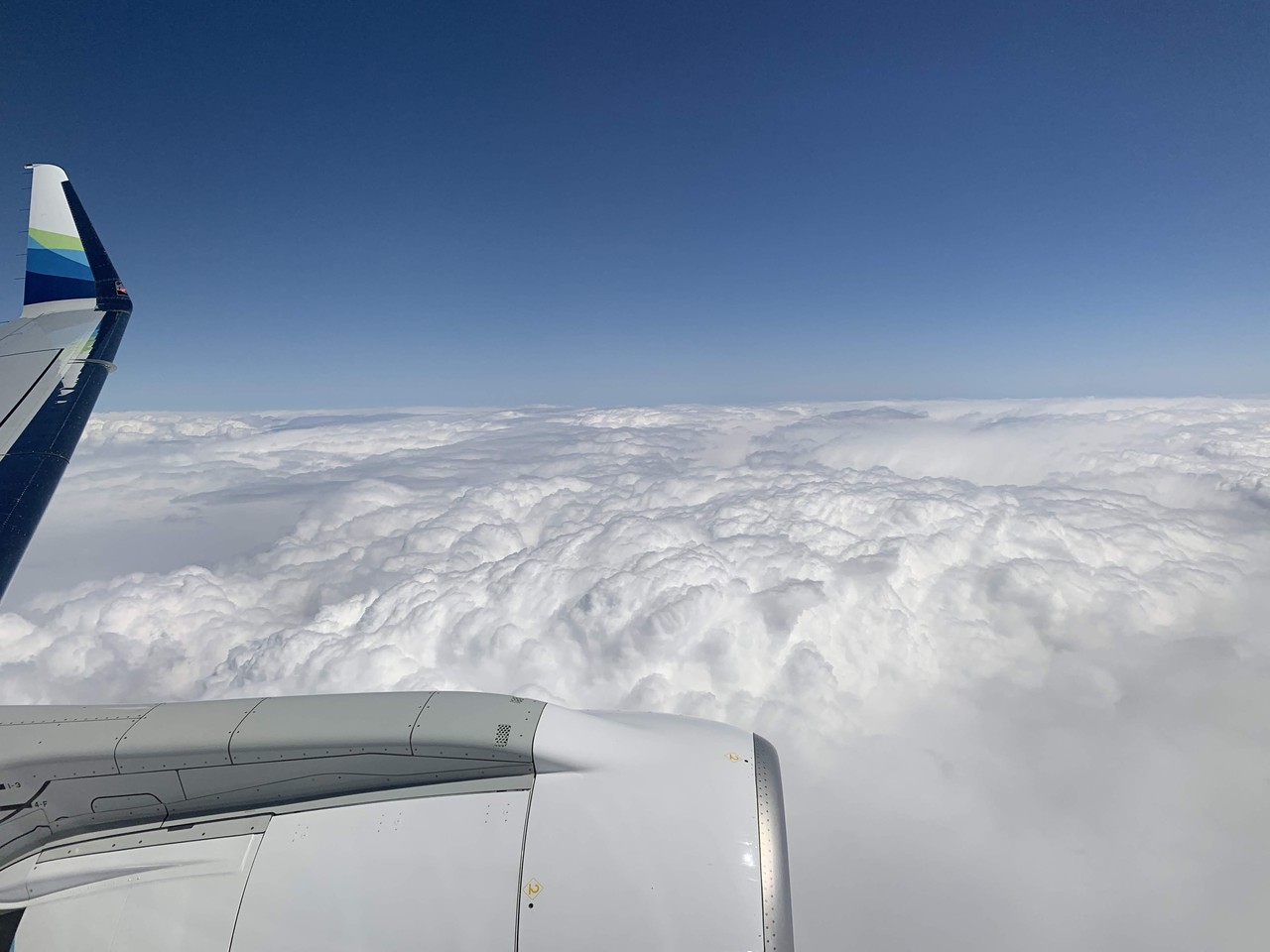 The initial descent into the Portland Area. We were informed by the captain that the descent through the clouds (pictured) would be rather choppy, so the seat belt sign was off for a total of about 10 minutes, and turned on just about as descent started. 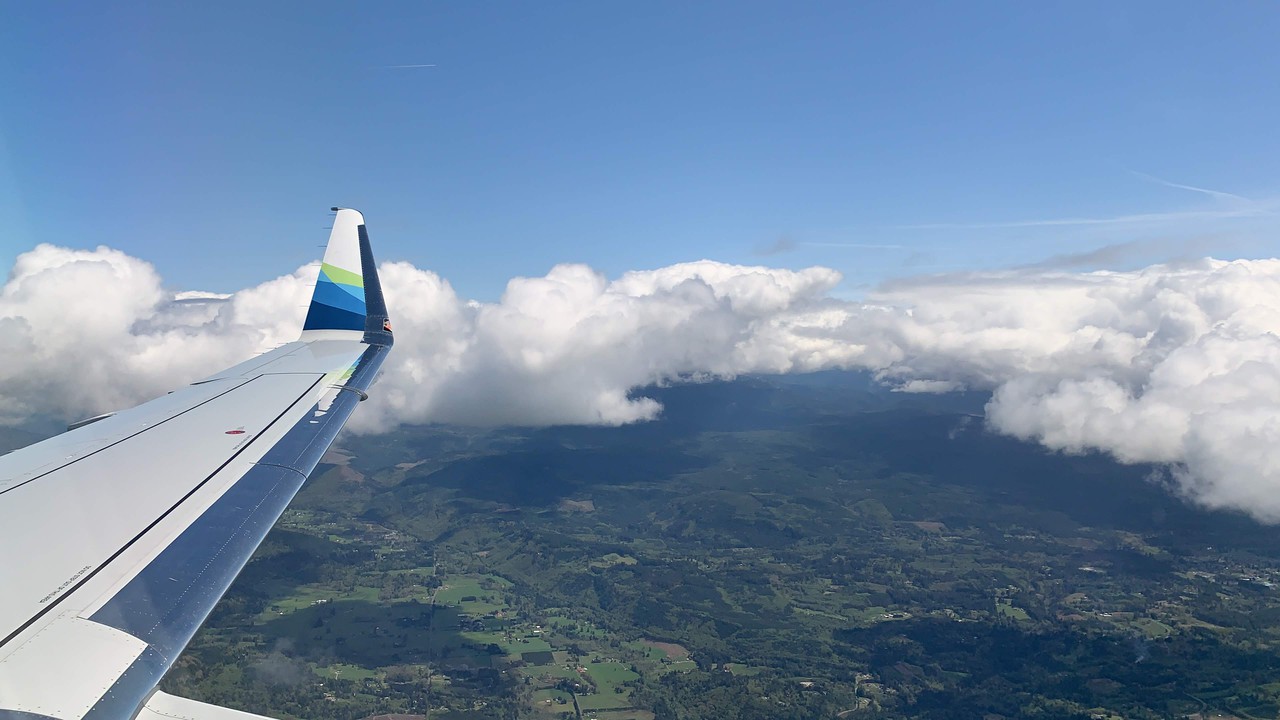 After descending through the majority of the clouds north of Portland, we were treated to a great view of Eastern Portland and the foothills of Mount Hood, with sun shining and shadows from the clouds. At this point, there was no more than ten minutes left in our short flight today. 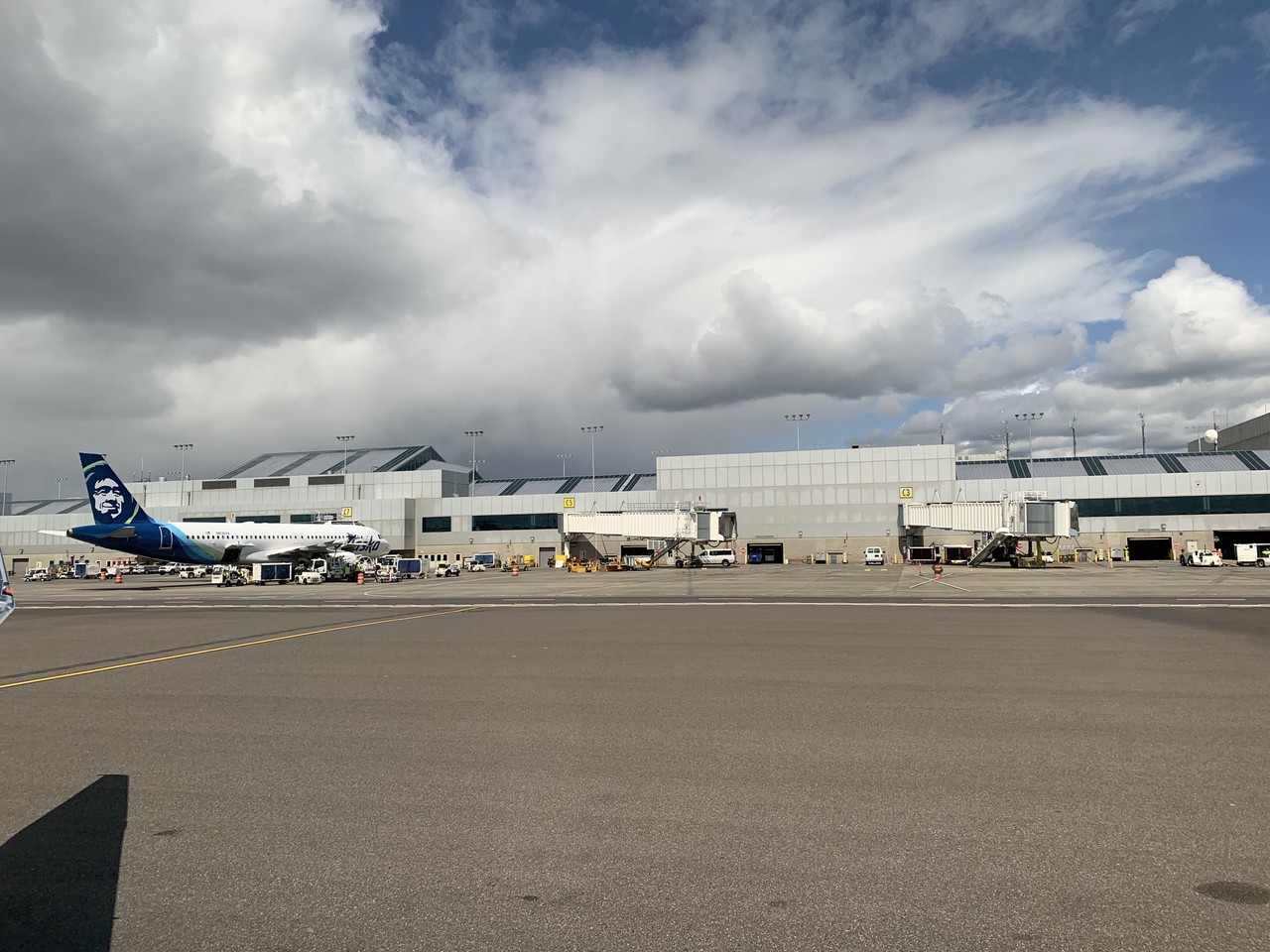 The South Side of Portland Airport is mostly occupied by Alaska (A/B/C gates). Normally, Horizon flights arrive at the A Gates, but we were informed that we would be deplaning using a jet bridge at Gate B1. Another Alaska aircraft loads cargo for Los Angeles, CA (LAX) over at Gate C7. 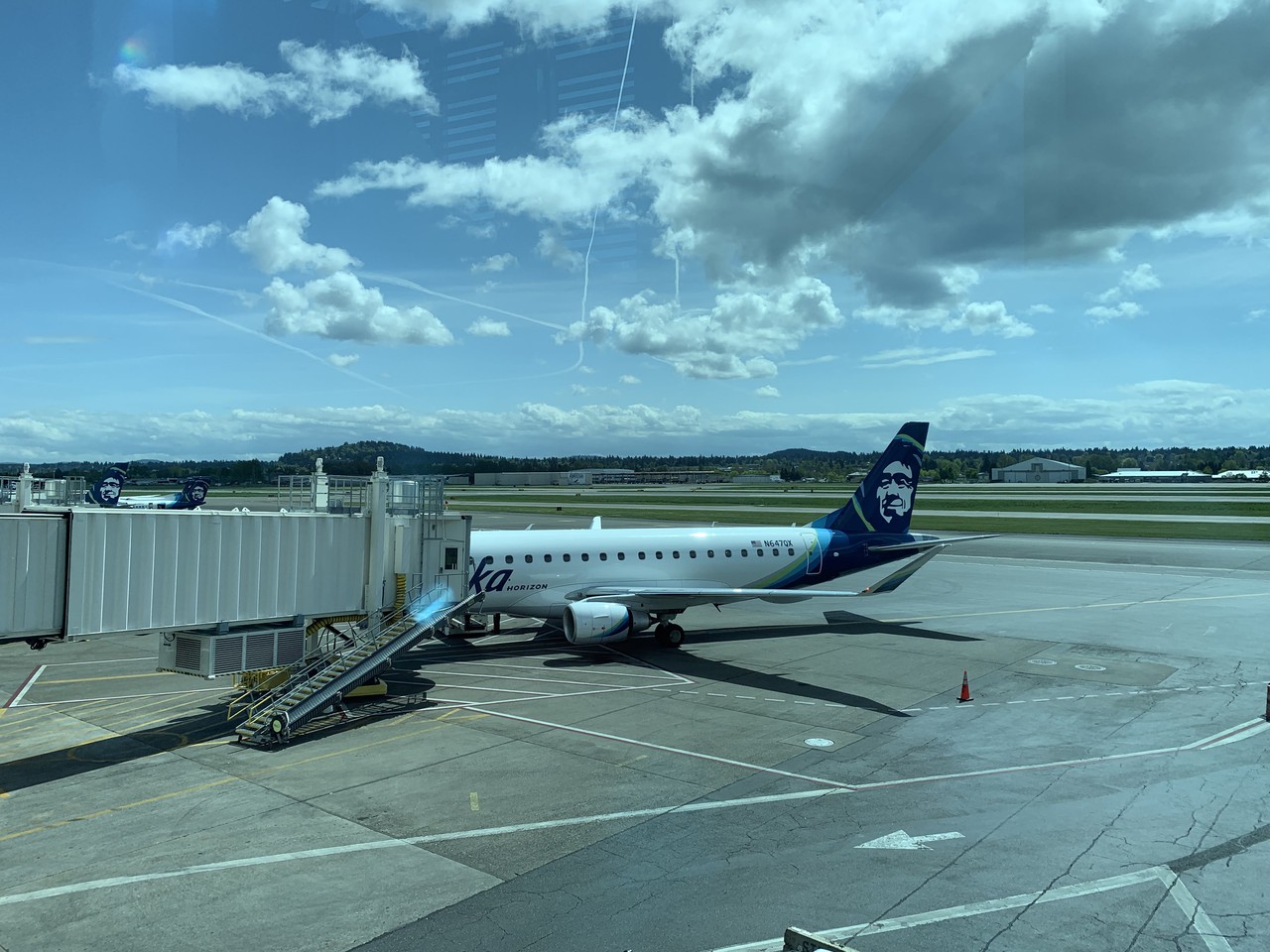 The sun reflecting off the windows made photos notoriously hard on this side of the airport, but after arrival at gate B1, our aircraft is going to get a bit of a rest. This aircraft's next scheduled departure was not until 705PM (so the crew told me). An on-time arrival, and a beautiful approach into Portland, I thought the quick hop down here was very comfortable and the seamless transfer experience at Portland onto my flight back home was also very smooth, but I'll save that for the next write-up!

All in all, Alaska Horizon is a great way to travel regionally from the Seattle area, and their service and cabin onboard the Embraer 175 jets beats out everything you get on the Q400 (minus the free alcohol, for those old enough for it); the cabin is just more spacious and comfortable, and does include Alaska's new "Premium Class" that seems more worth it on a longer flight, I paid for it here solely for the experience and higher chance of having an empty seat next to me, the things I'll pay for, huh.

I would 100% recommend anyone in the Seattle area that is traveling to consider flying to their destination from Paine Field any time. The passenger experience is far more exclusive and is far less chaotic than anything you could experience down at SeaTac, prices often match up with the SeaTac flights so it is definitely worth a consideration in my opinion.

My biggest drawback to the Paine Field terminal at the time was it's lack of amenities post-security. There isn't a Hudson's news or Starbucks (to my sheer horror), and the Beecher's was not open at the time I traveled (it has since opened, see note towards the beginning), but overall this experience is something worth checking out just for aviation enthusiasts and those looking for a faster, more comfortable way to travel from Seattle.

Thanks for reading my first trip report, everyone!
_JC

He wrote 7 reviews about 3 airlines and 8 airports.