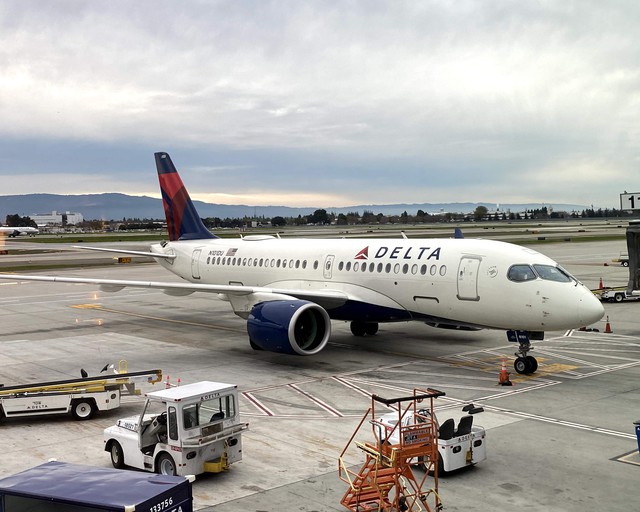 #39 out of 79 Airlines A minimum of 10 flight-reports within the past two years is required to appear in the rankings. 760 reviews

Having just flown into SJC from Seattle, I had checked out the terminal area after landing and it was time to fly home to Seattle. This was the return leg of my mileage trip to fly the Delta A220 for the first time! On the flight down, I flew Comfort+ and was going to be flying First Class back to Seattle, as it was the same mileage cost as Comfort+, at just over 15k SkyMiles round trip for this ticket. After checking out the Baggage Claim after arriving, it was time to head back to the terminal for my flight to Seattle!

The Delta check-in area is located on the lower level of Terminal A at SJC. There were a few agents for general baggage drop and one at the Sky Priority lane. I utilized a check-in kiosk to print my boarding pass, and confirm my First Class seat, 2D. 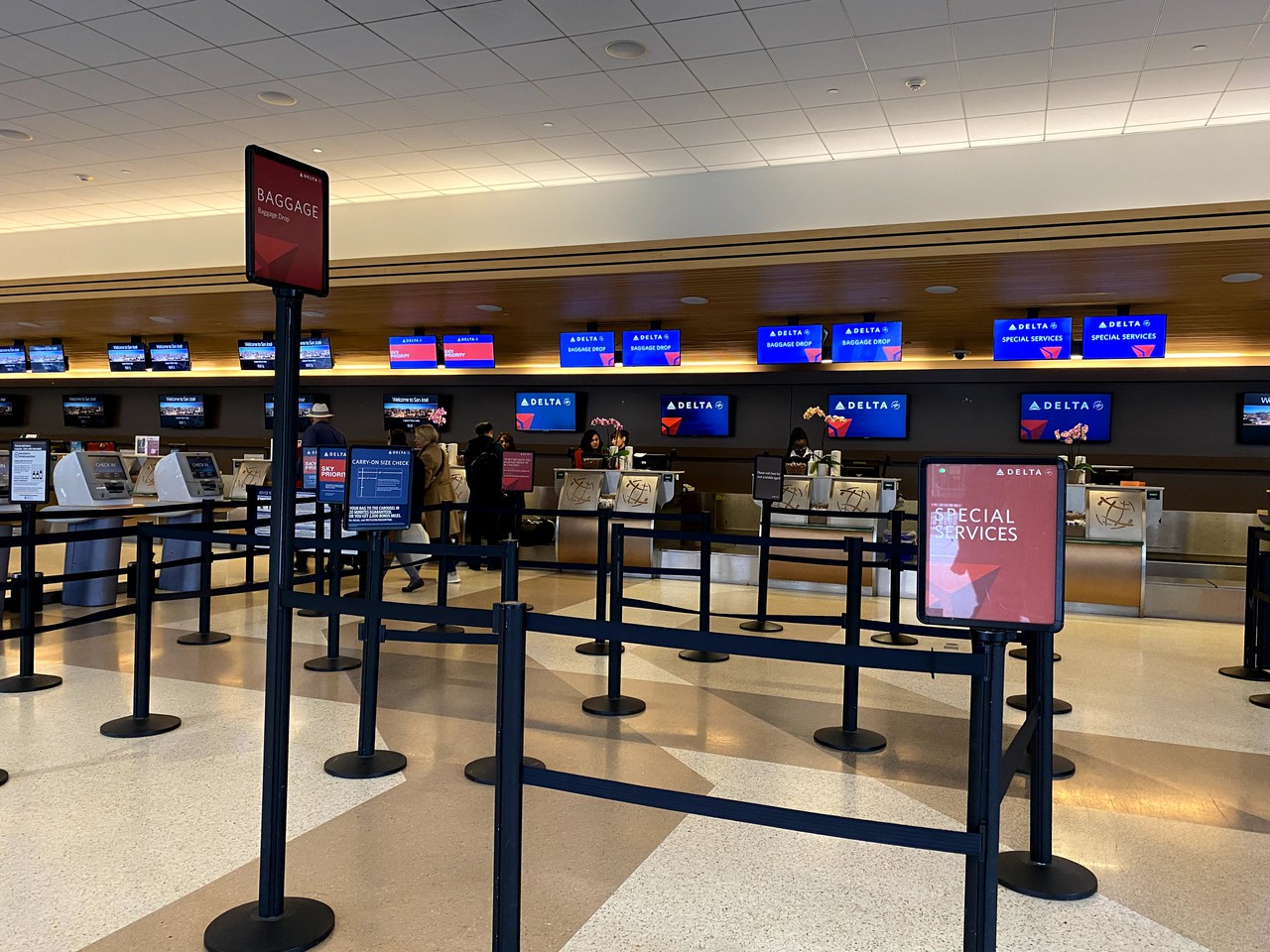 Once I was all checked in, TSA is located just above the Check-in Hall. My first class ticket came with "Priority" line access at SJC, but as there was only ONE person in front of me, I was directed to the general screening line and was through TSA in under five minutes. I did not have PreCheck yet for this trip, but I imagine this terminal could get really busy really quickly, so peak periods here could definitely be challenging. 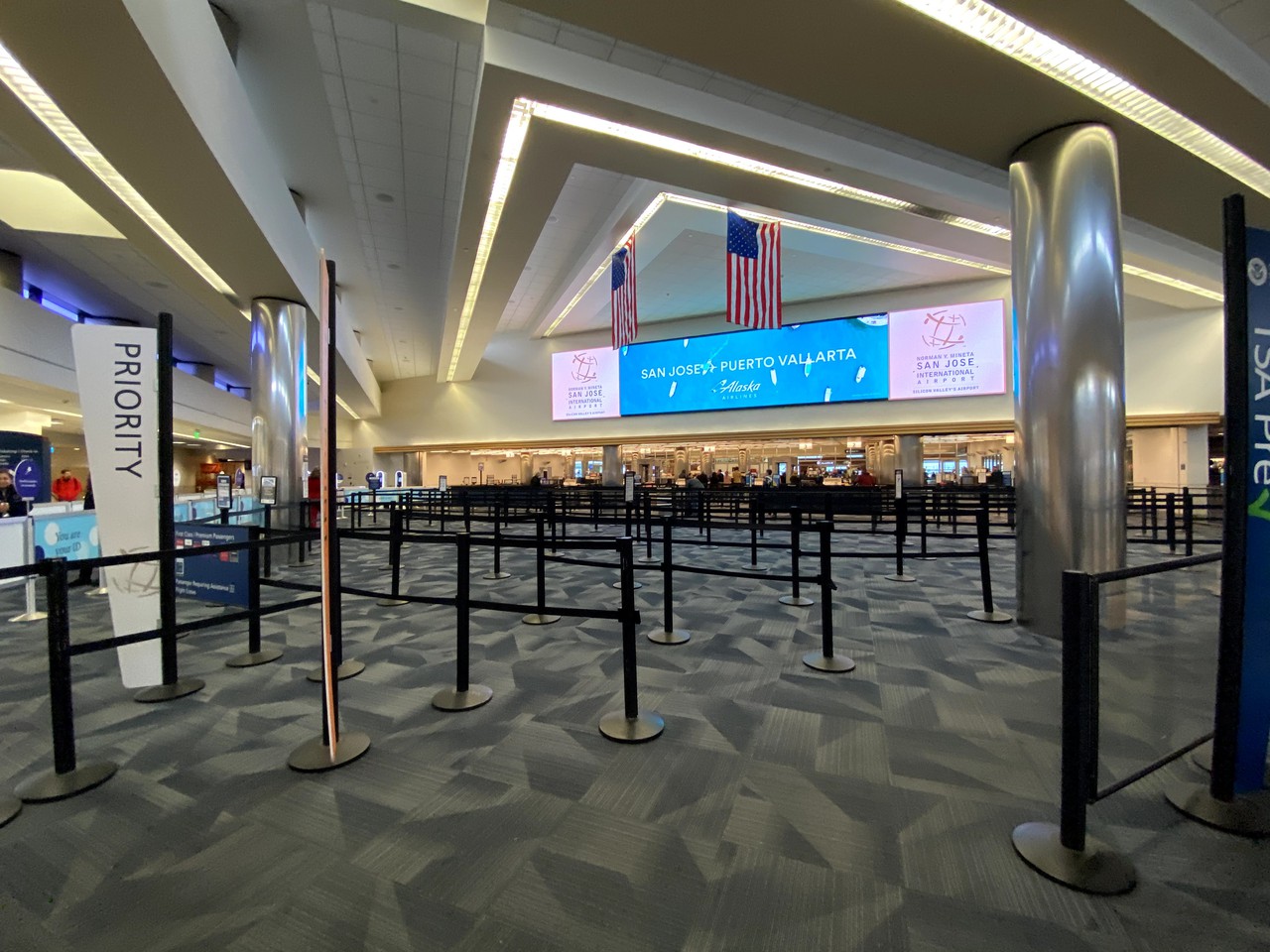 After clearing security around 245PM, I confirmed the status of my flight, as of which was on-time (for now, more on that later) departing from Gate 11, just across from TSA in Terminal A. Almost all airlines depart from Terminal A here at SJC with just Alaska and Southwest departing from Terminal B. 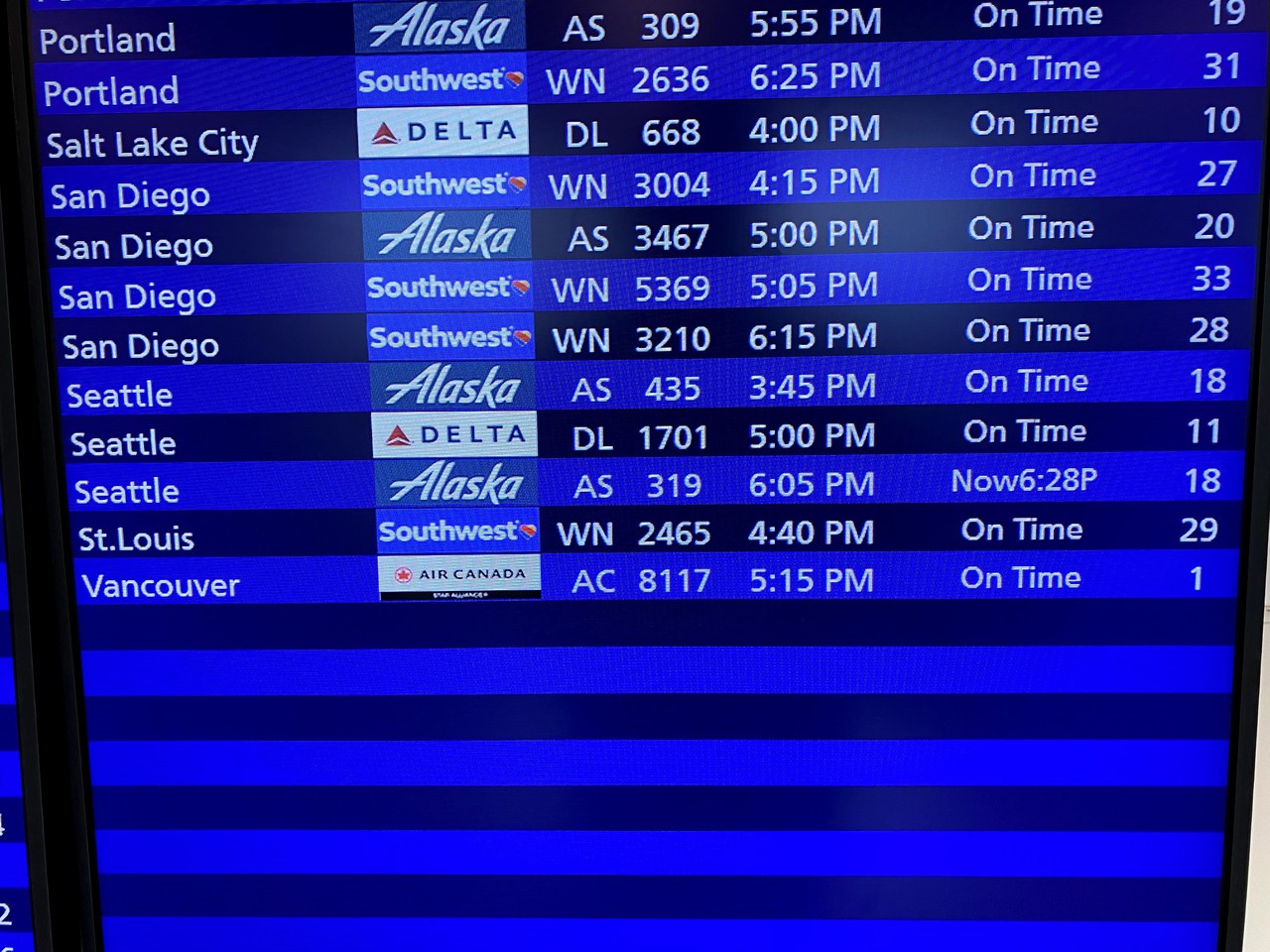 One of Delta's newer A220s, N115DU, pushing back from Gate 10 for Salt Lake City. This was the craft that flew me here from Seattle! :) 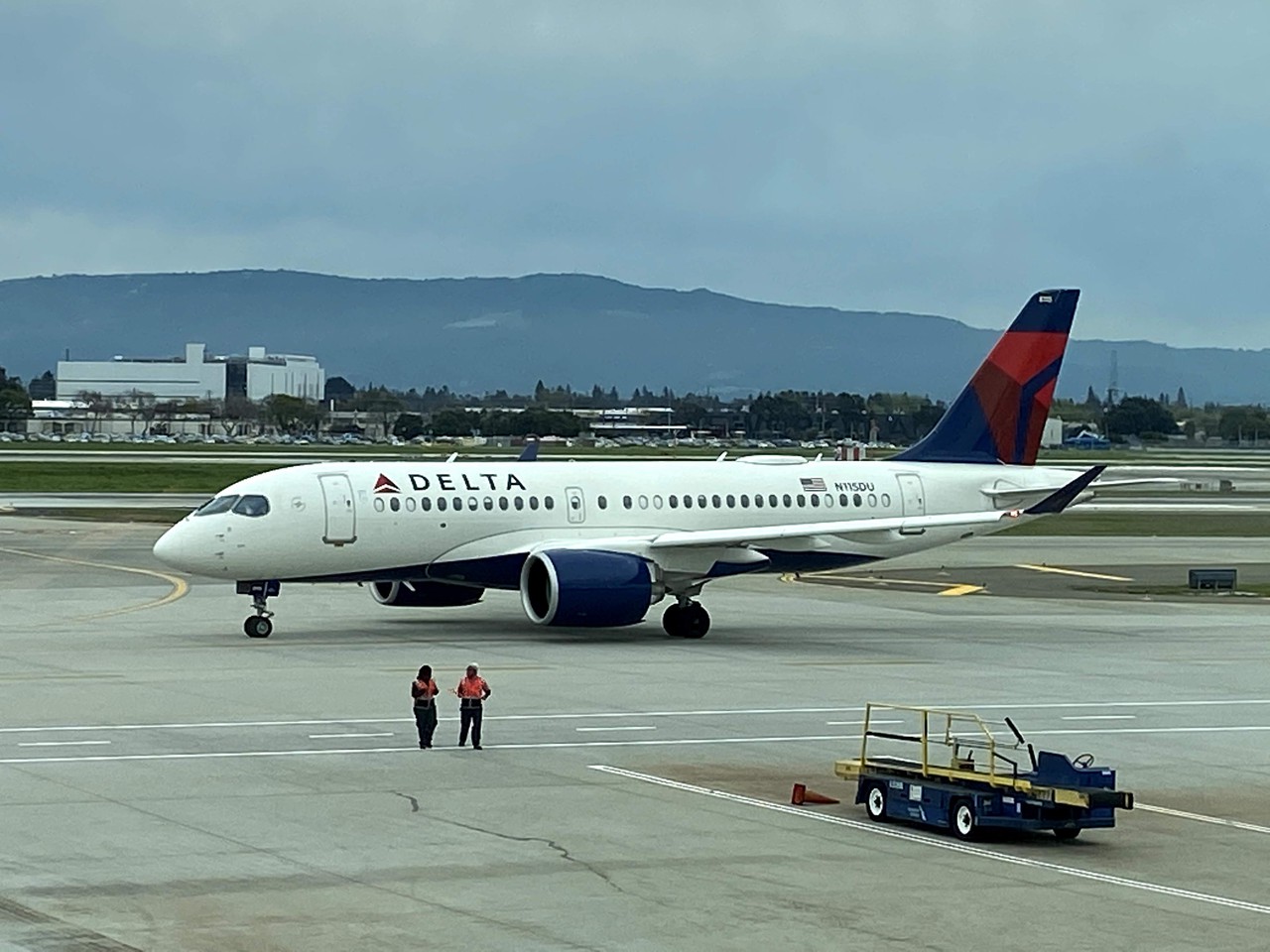 My best catch from SJC! BA's 787-8 arriving at Gate 15 from London-Heathrow with a beacon on top! 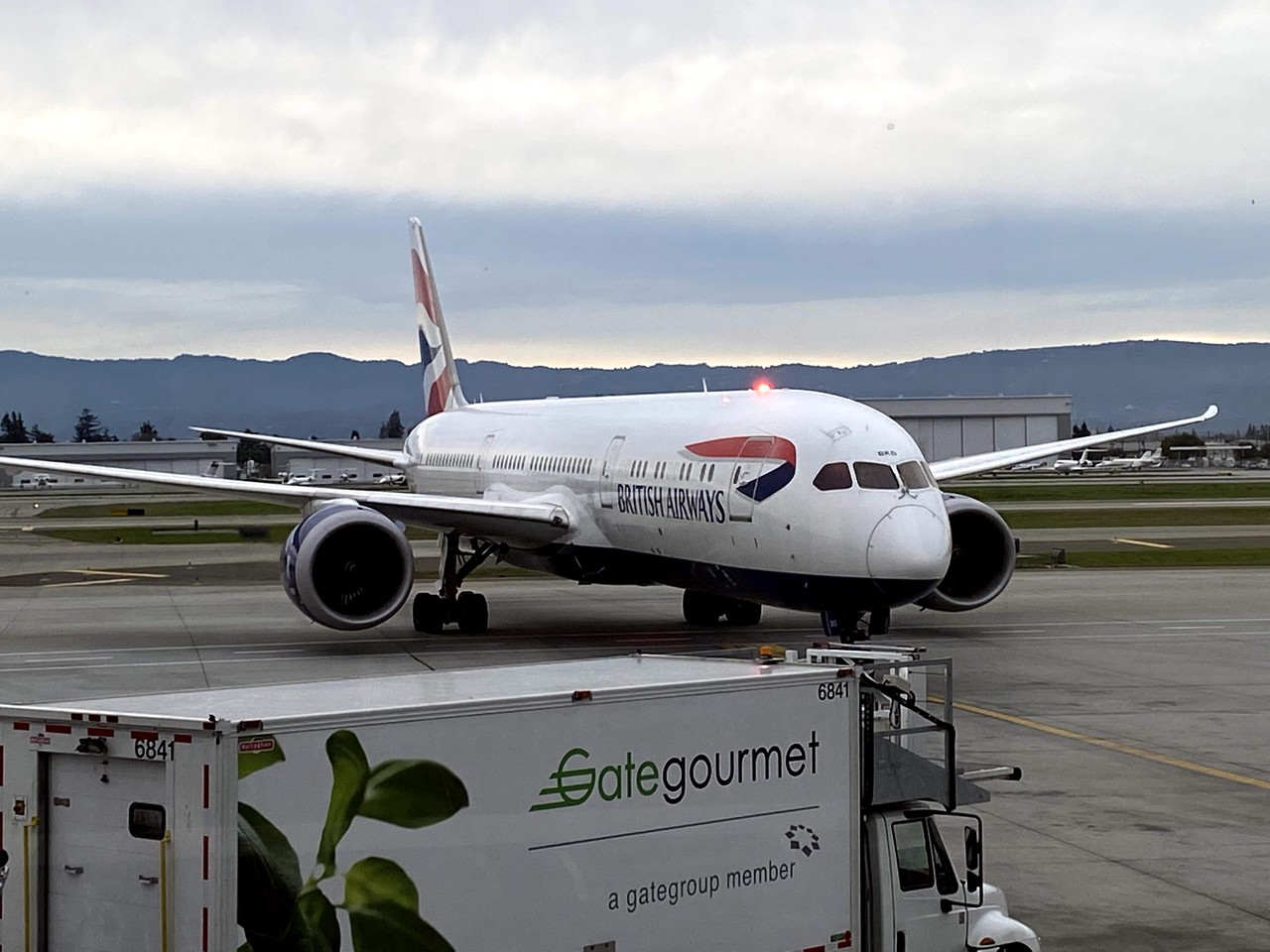 AA A320 at Gate 8 boarding for Phoenix, AZ. Now if we could get just a glimmer of the sun like this in Seattle, I'd be happy! 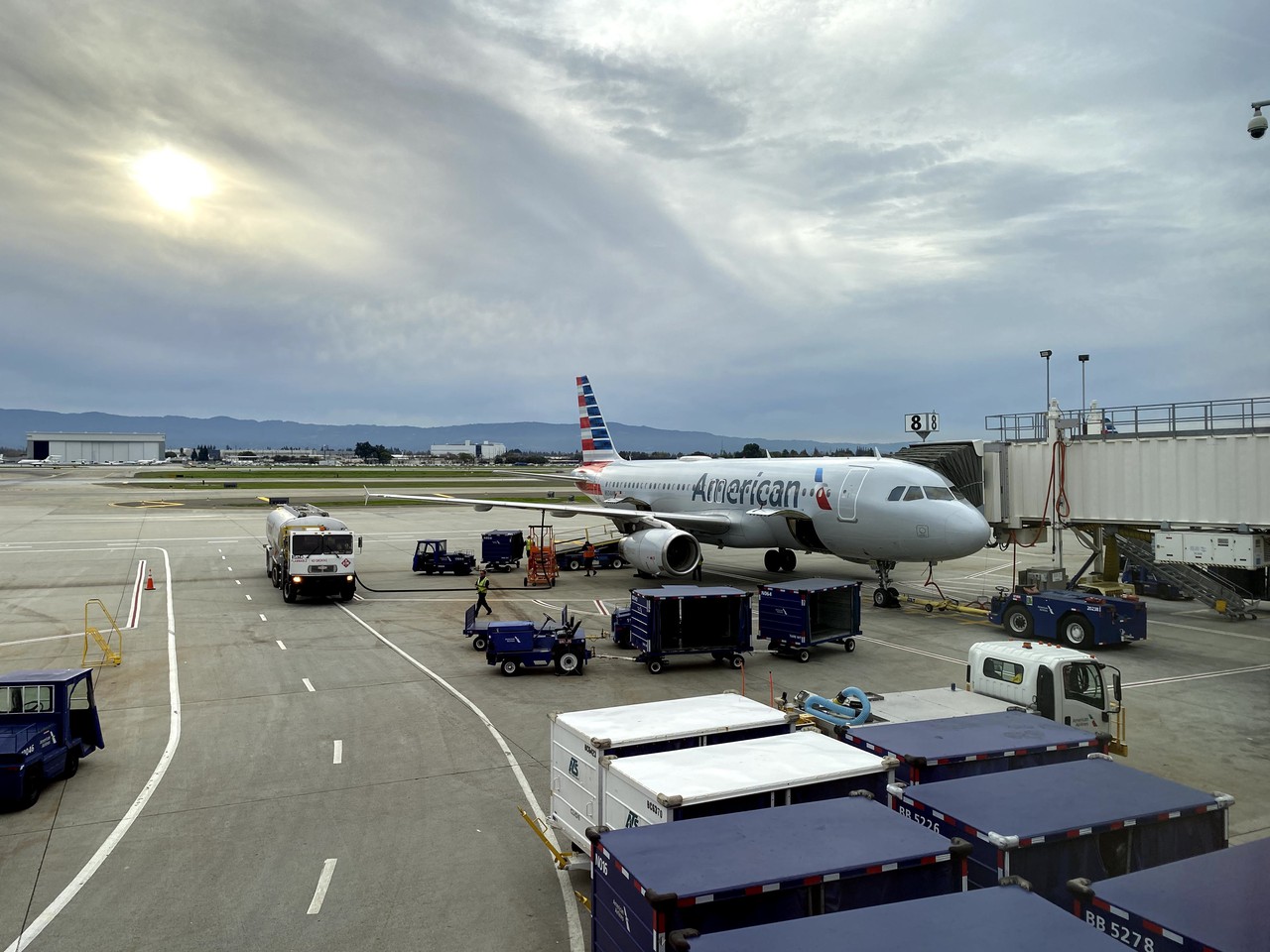 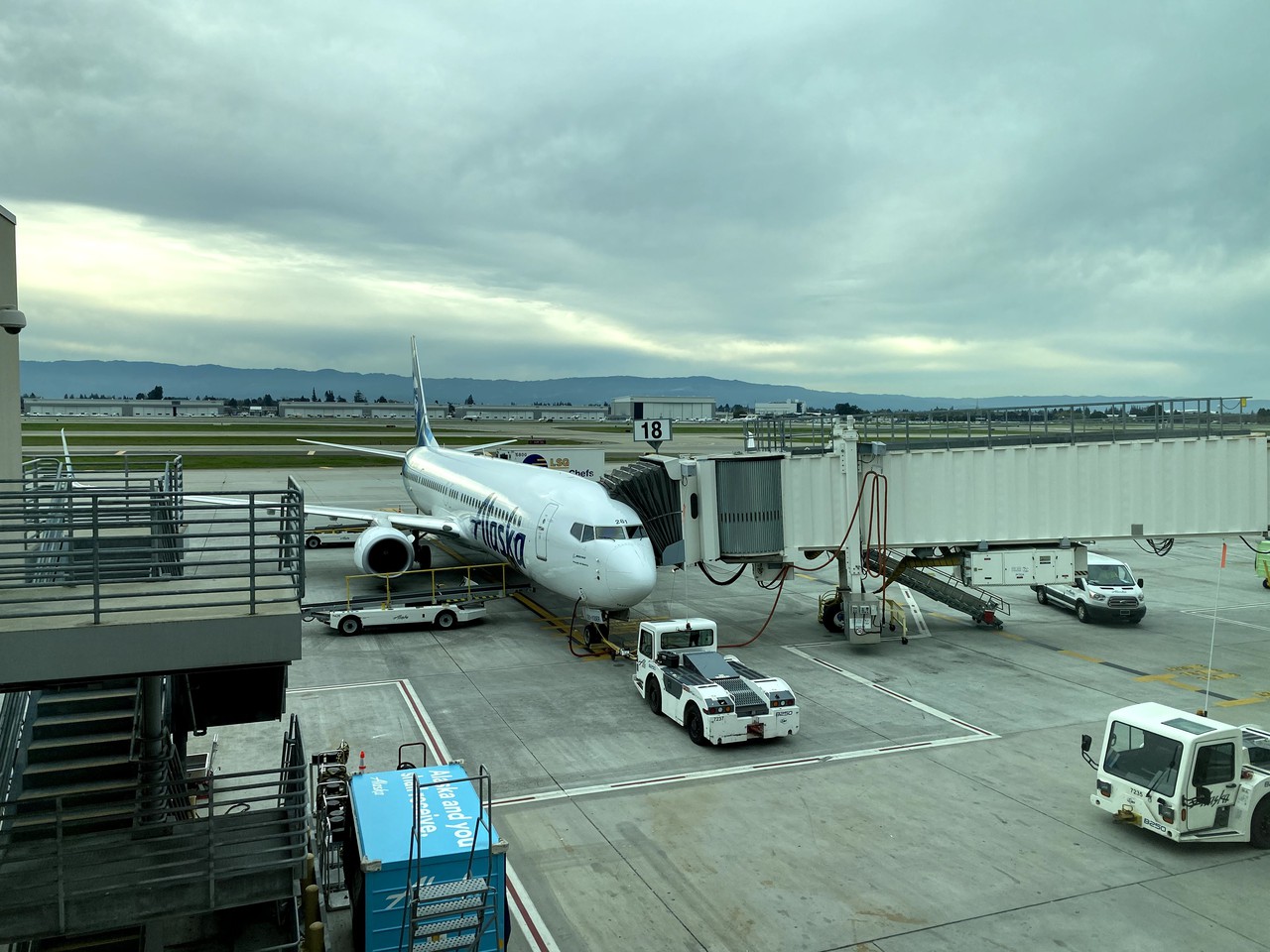 The seating are at Gate 11. Turns out, the inbound aircraft left from Salt Lake City about an hour late, so our boarding process was delayed from 4:20pm to 4:55pm. 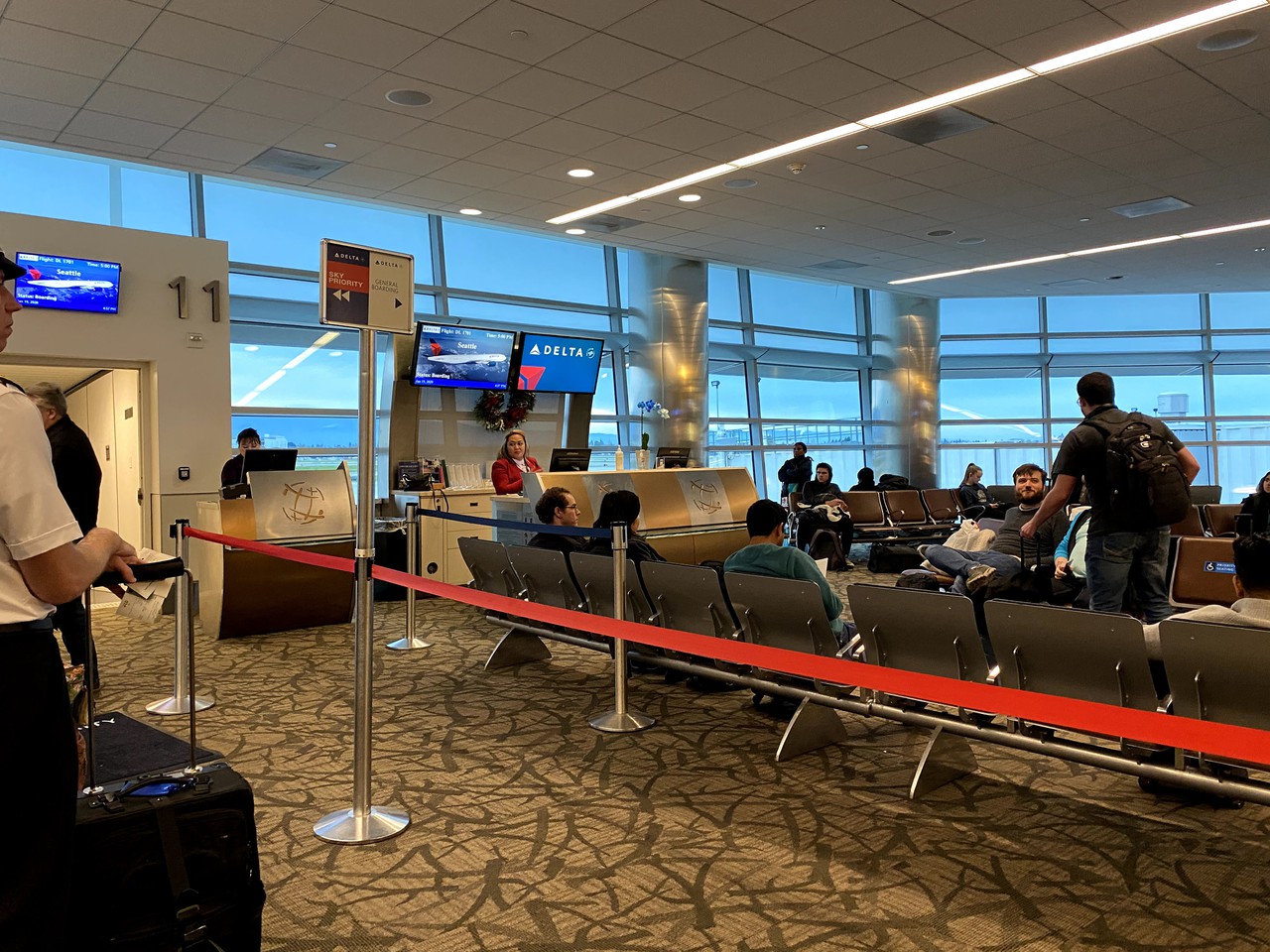 Delta has rebranded their boarding process recently and I definitely have seen improvements on various flights recently. Passengers are grouped by aircraft class (with SkyMiles Medallion Members scattered throughout) and are now color-coded to match the group of cabin. *photo courtesy of The Points Guy*

I was traveling in First Class for this flight, and was in the first group to board with Diamond Medallions boarding with the First Class group as well. The First Class cabin on the A220 is setup in a 2-2 configuration, each seat offering 36" of pitch and 21" of seat width. 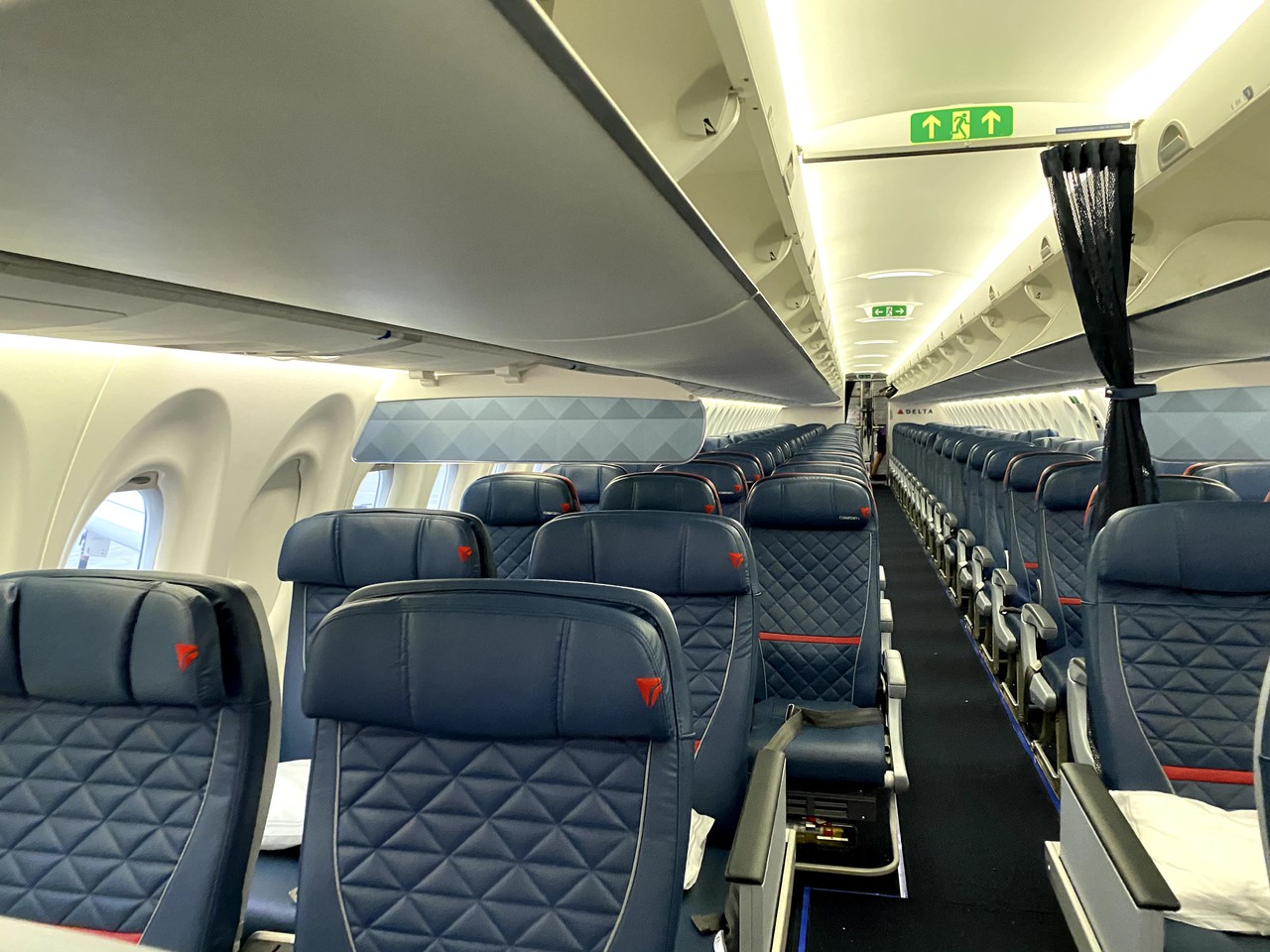 My seat, 2D, was ready with a pillow, blanket and bottle of water located in the seat console. If sitting in First Class on Delta's A220, I would recommend window seats in row 2, 2A or 2D, as you will have access to two windows in the row, as compared to just one in Row 1 and Row 3. 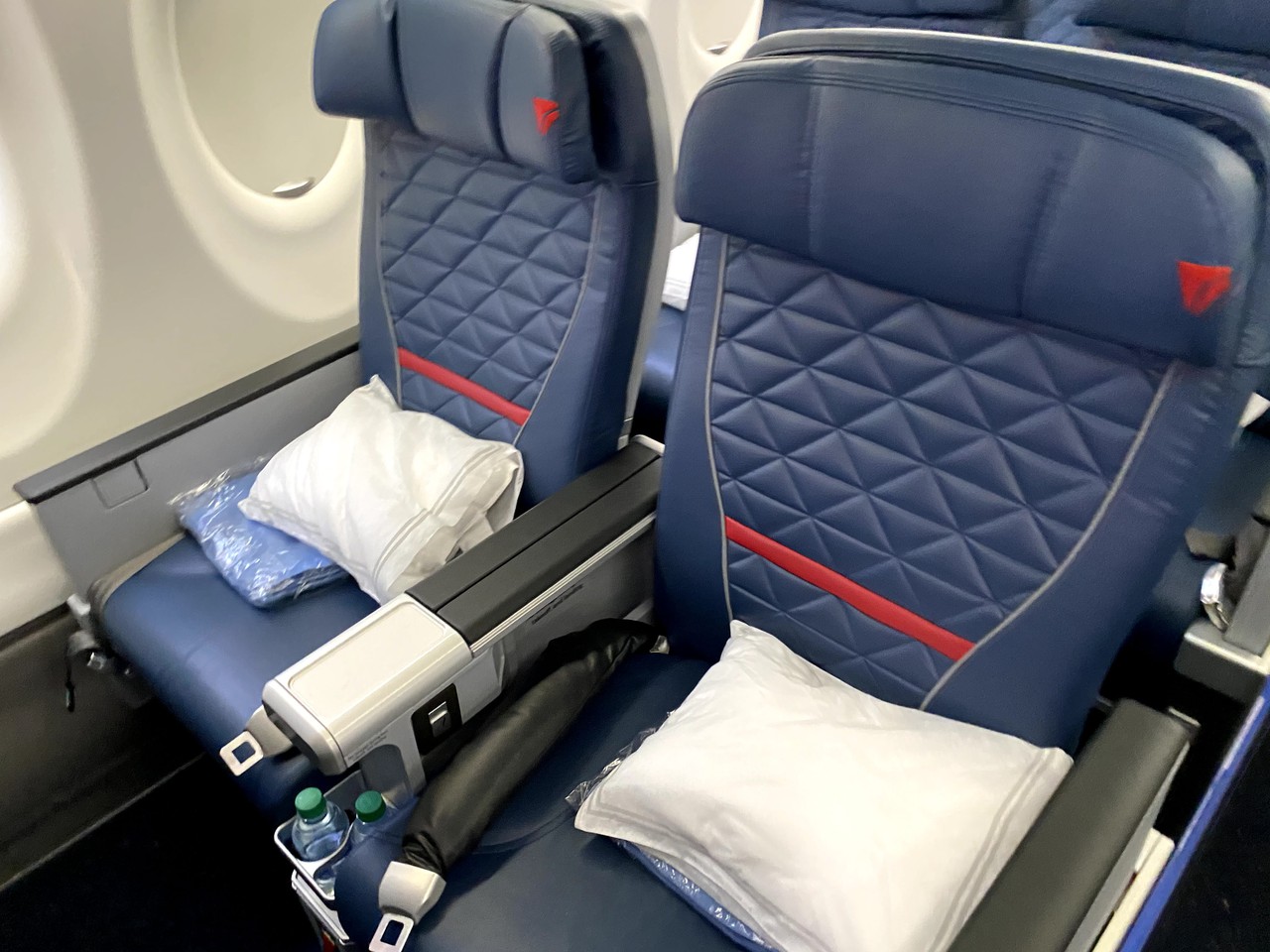 The windows on this plane are absolutely HUGE and the view definitely sold me on flying this plane again. The engines are REALLY big compared to the rest of the plane, and it just put the whole thing in perspective. Its hard to tell, but you can see how much smaller the engine is on the E175 at the next gate over. I think we have the better plane :). 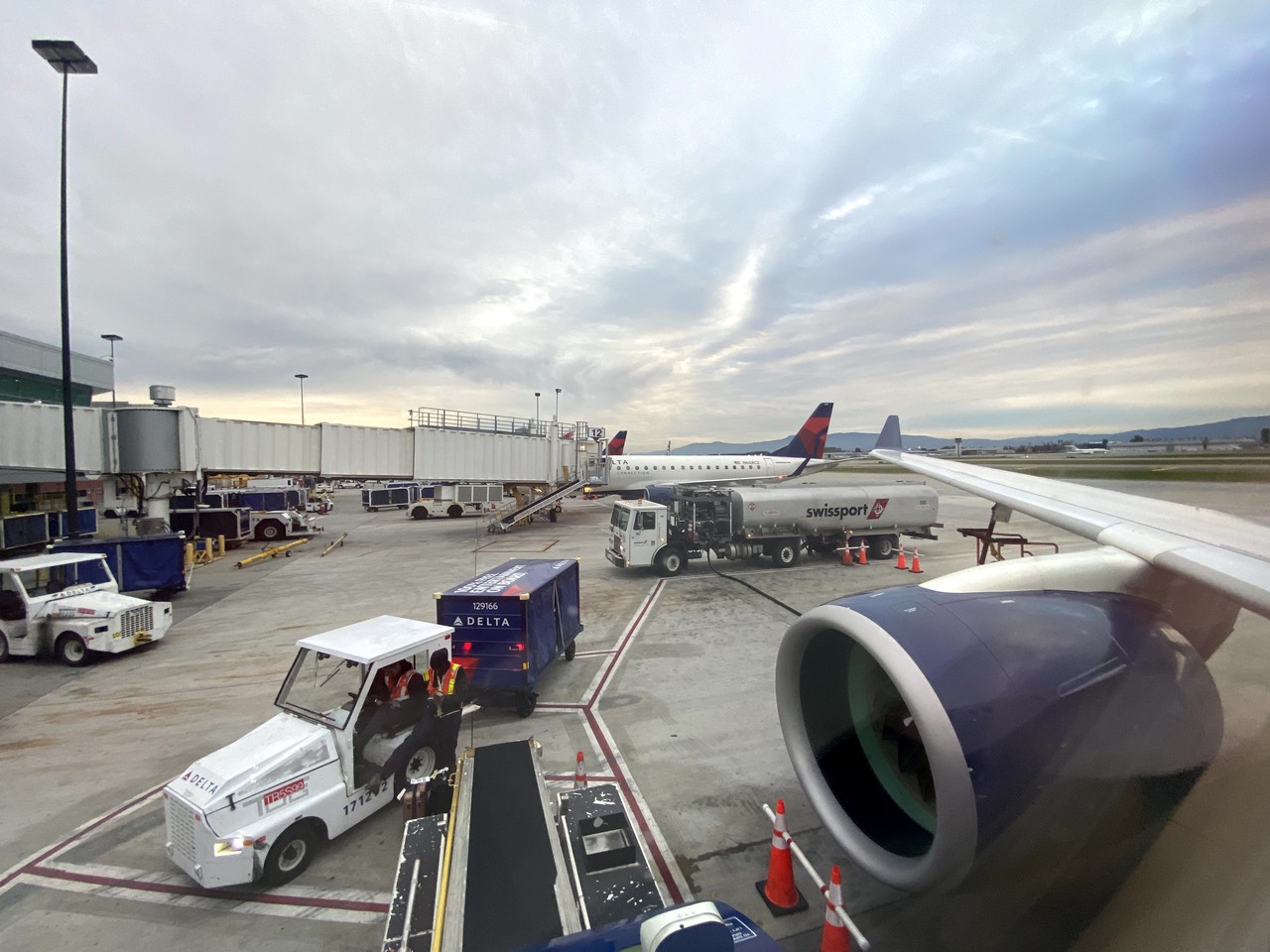 The legroom in this seat was pretty decent, but the TV's in First Class are so large. They feature Delta's new Wireless Entertainment system, so there are no entertainment boxes anywhere throughout the aircraft. USB ports are built into the monitor, while the 120VAC power plugs are located ahead of the seats in the middle. 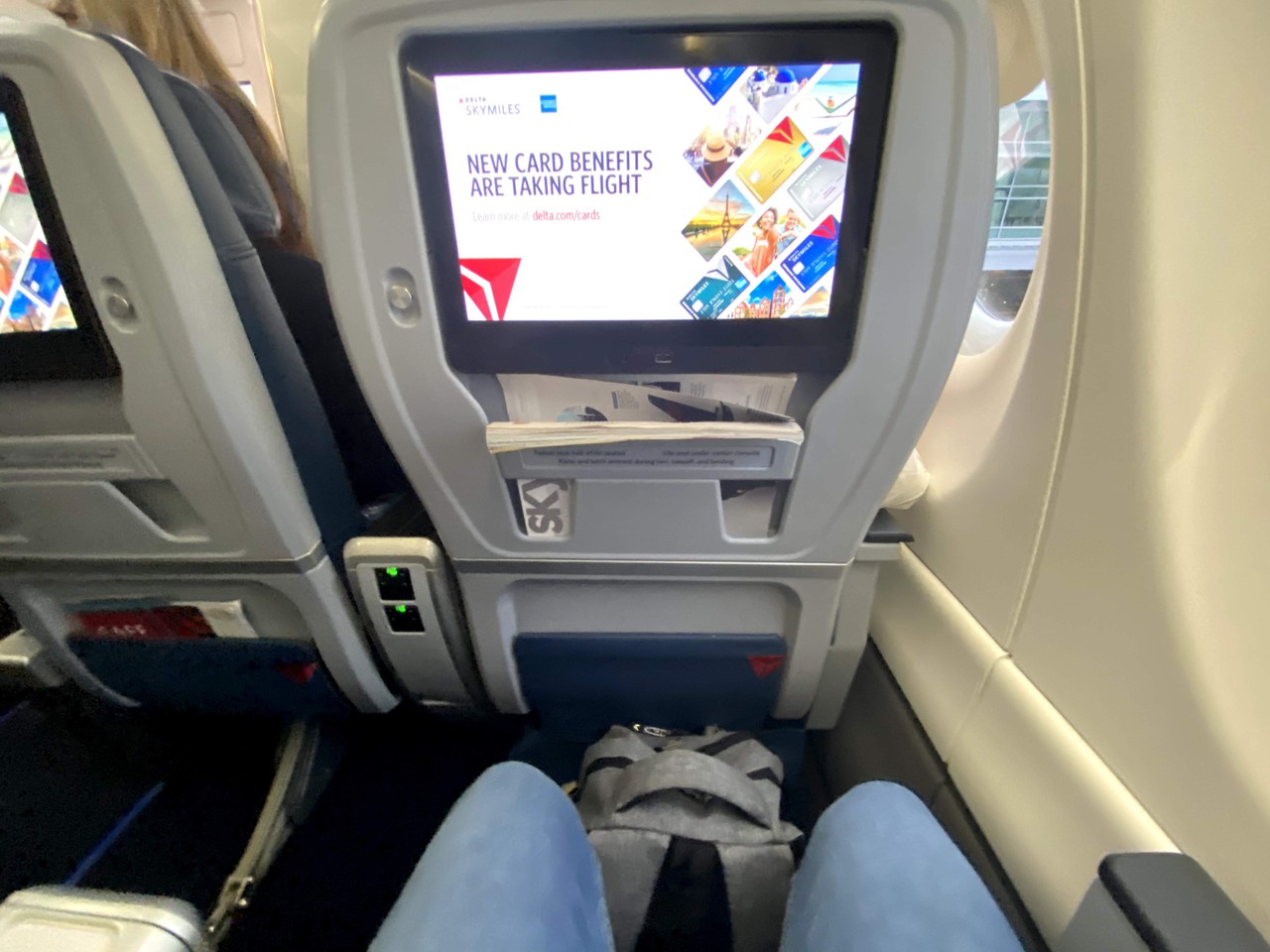 The tray table featured a folded up position, as well as the fully opened position, allowing for half of the space to be used if needed. 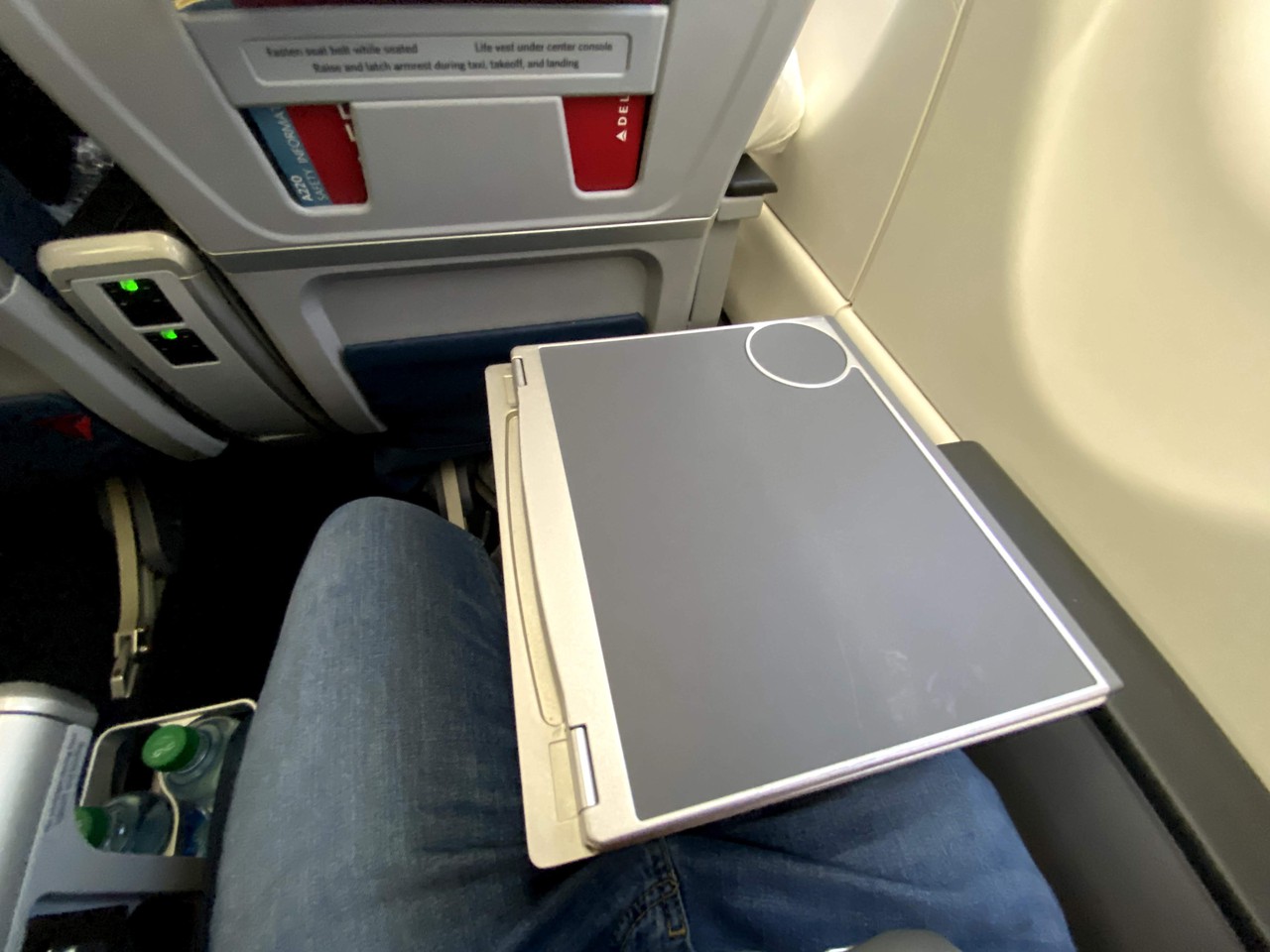 The tray table folded out to be a pretty stable surface (I do not know where the water came from :\) 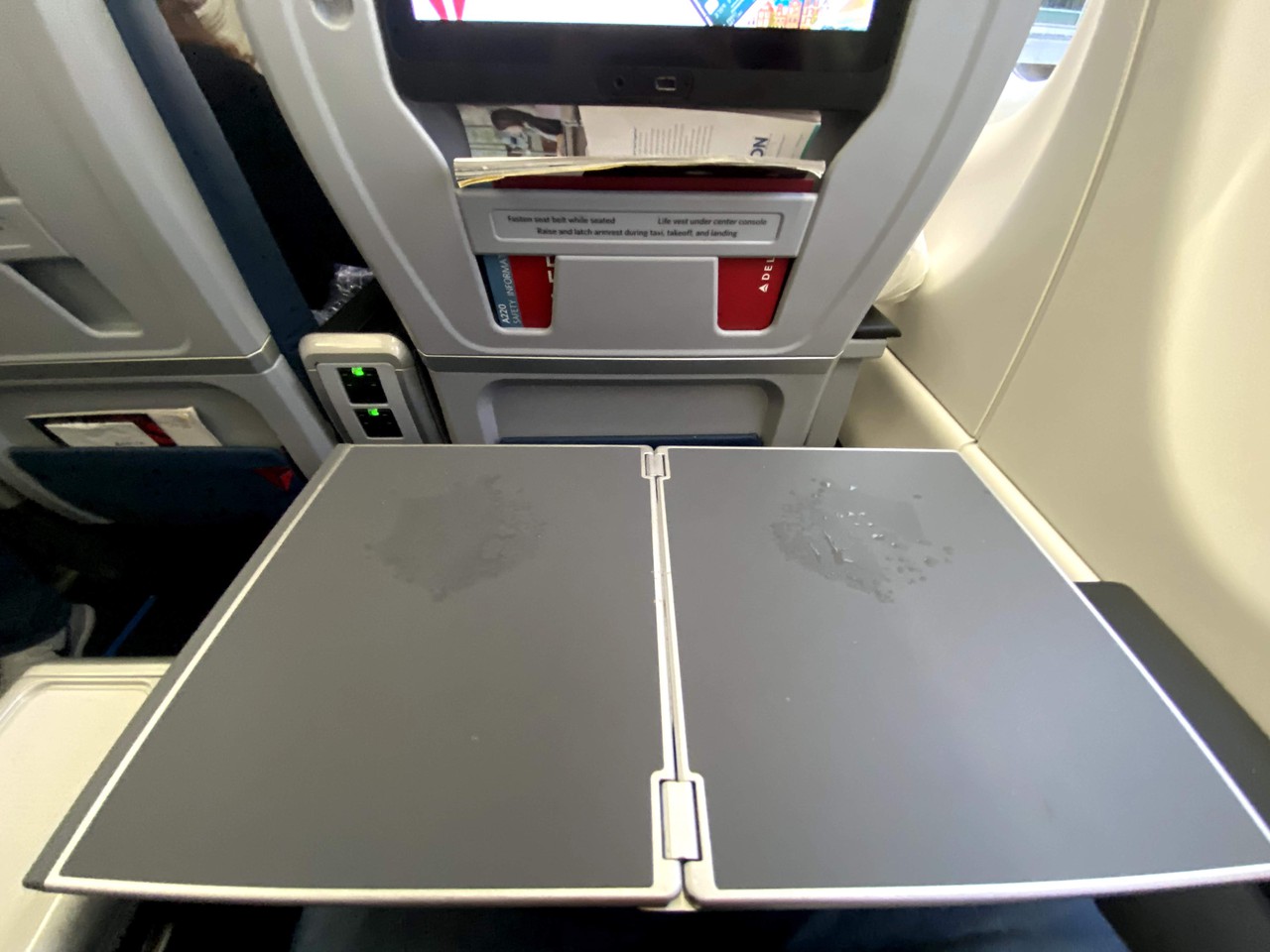 Today, we would be flying on N101DU, Delta's first Airbus A220-100 aircraft, delivered new in October 2018. Everything appeared to still be brand new, despite the one-year age tag. 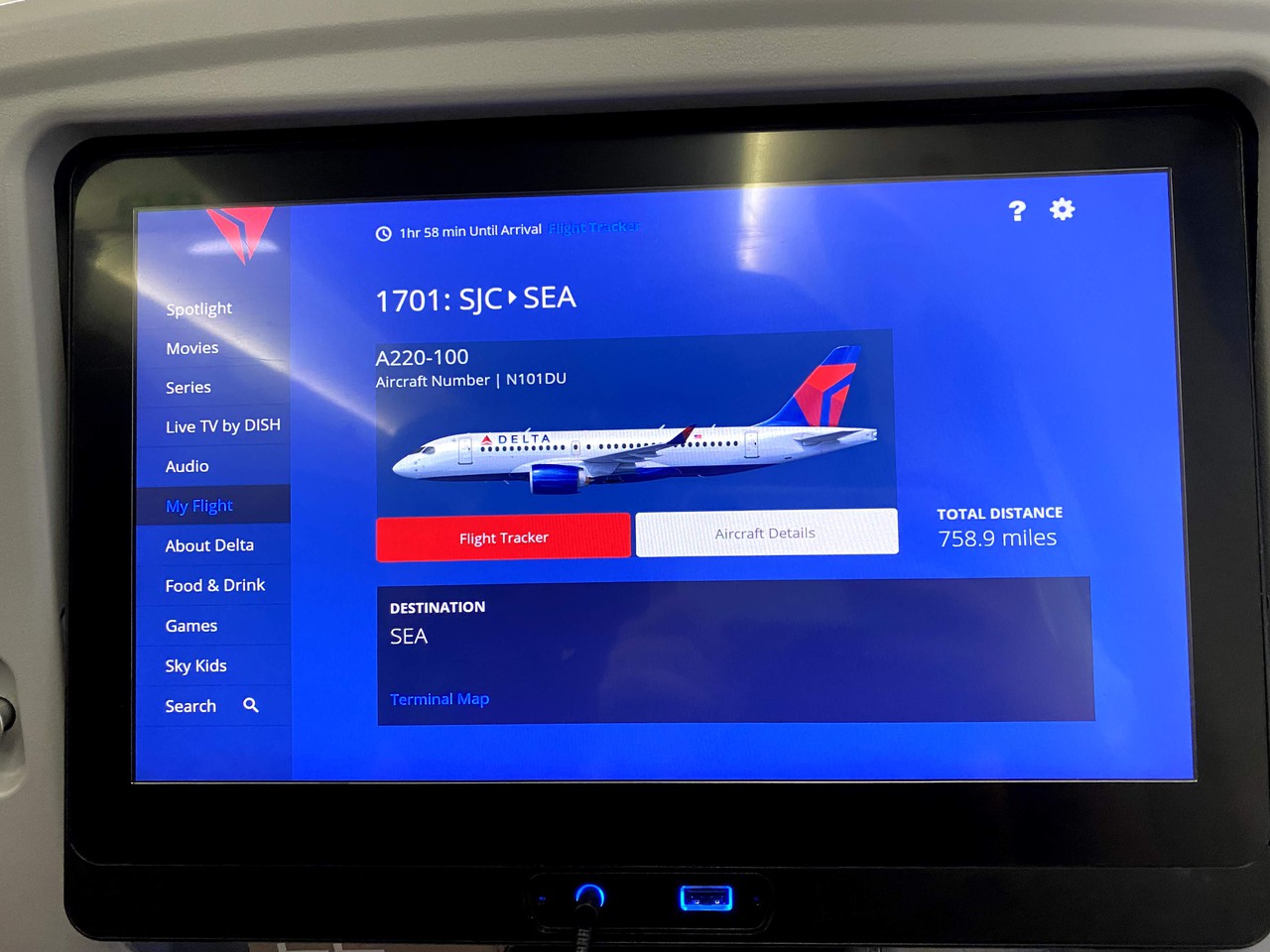 PUSHBACK, TAKEOFF & THE REST OF THE FLIGHT

Getting decent pictures later on in the flight was kind of hard, so pardon the reflections in some of my photos. Boarding was completed about 15 minutes late, pushing back from the gate around 5:10PST and we were first in line for takeoff, so off we went. 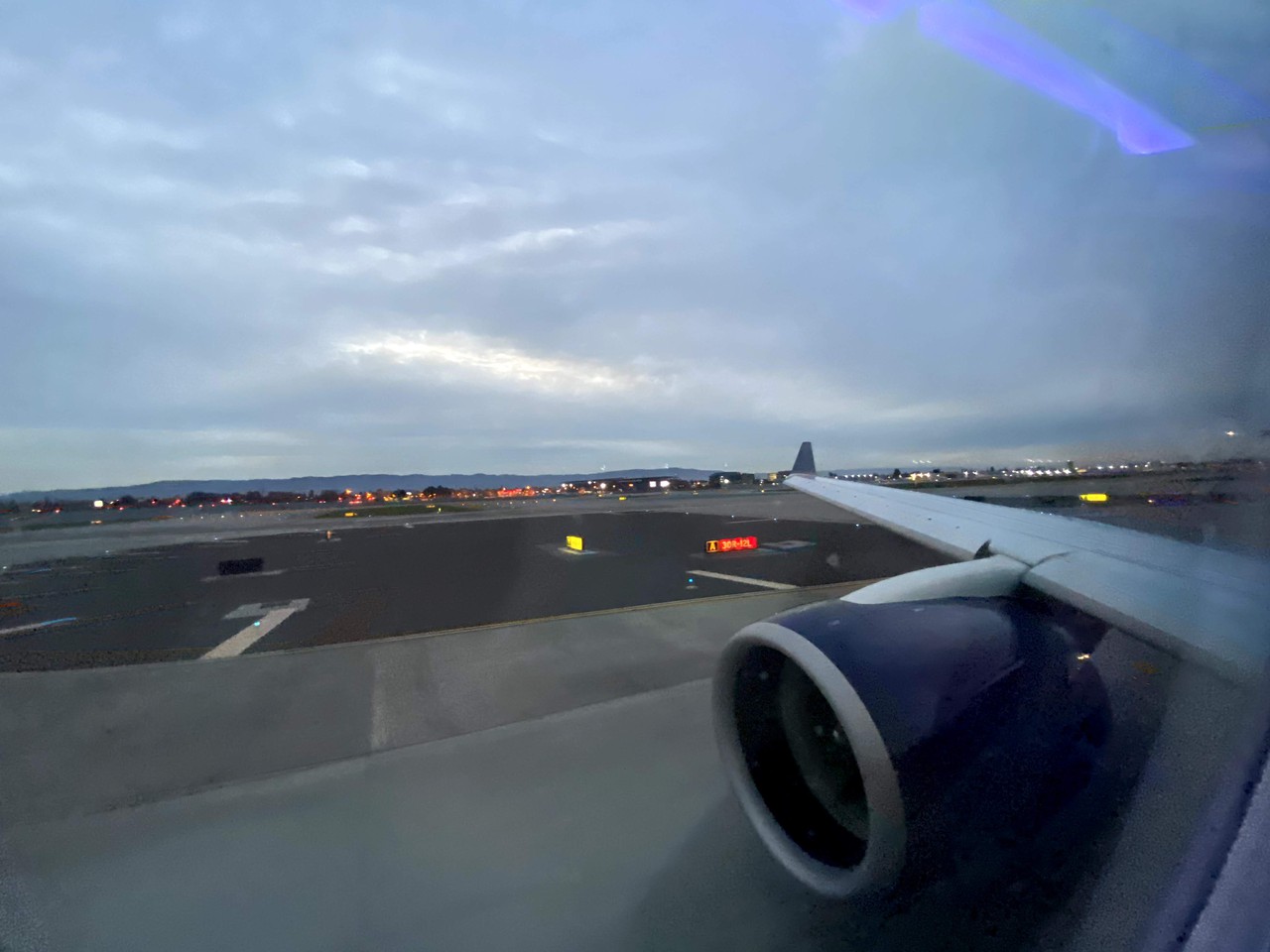 The SJC departure pattern involves flying over the city then the airport as we climb to avoid the SFO arrivals so it offered some really great views of downtown and the suburbs as we flew over. 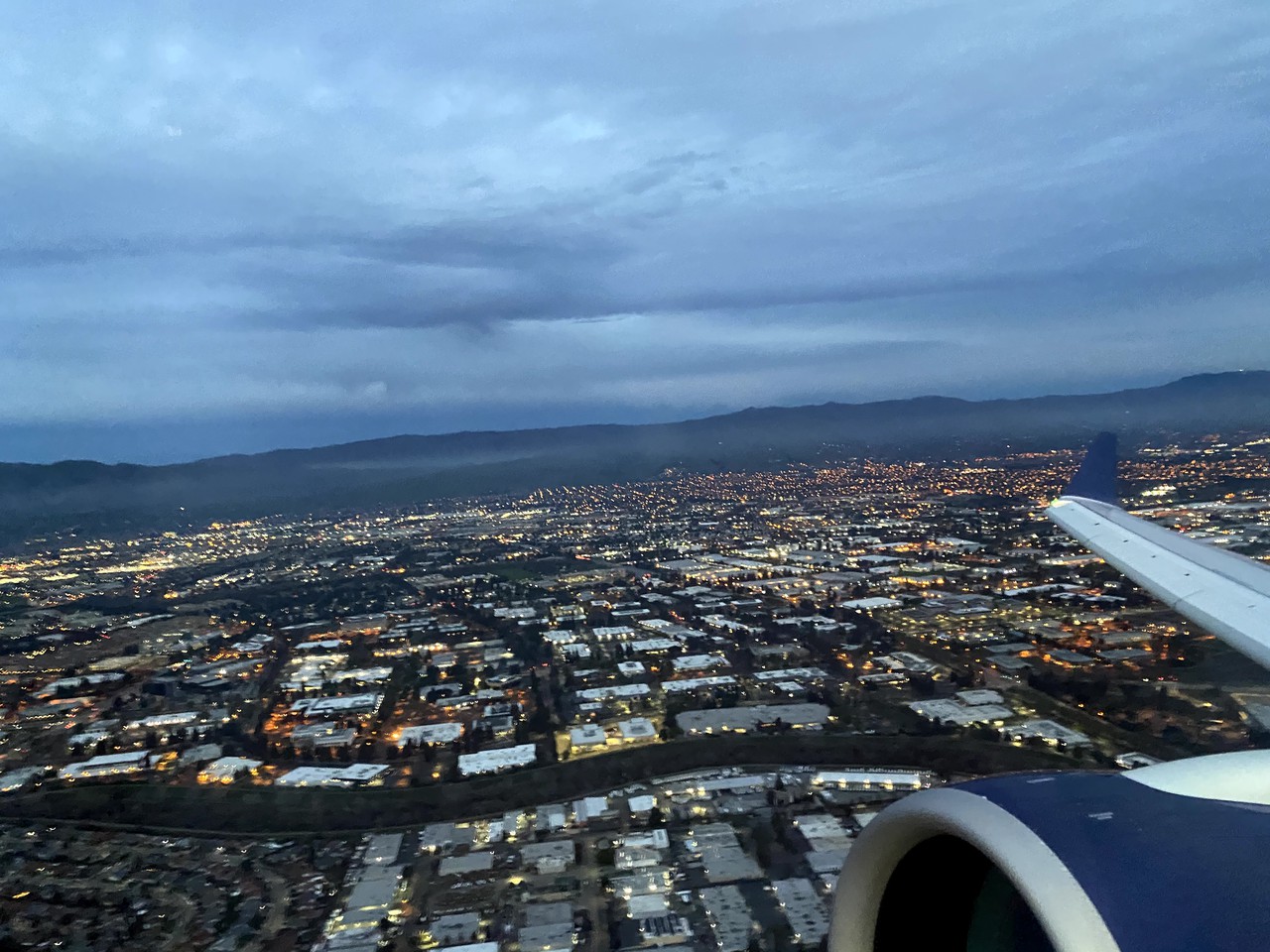 We flew right over the airport (SFO in the background) and it is really apparent how locked into the city this airport is and that the surrounding area is just built up right around the airport. 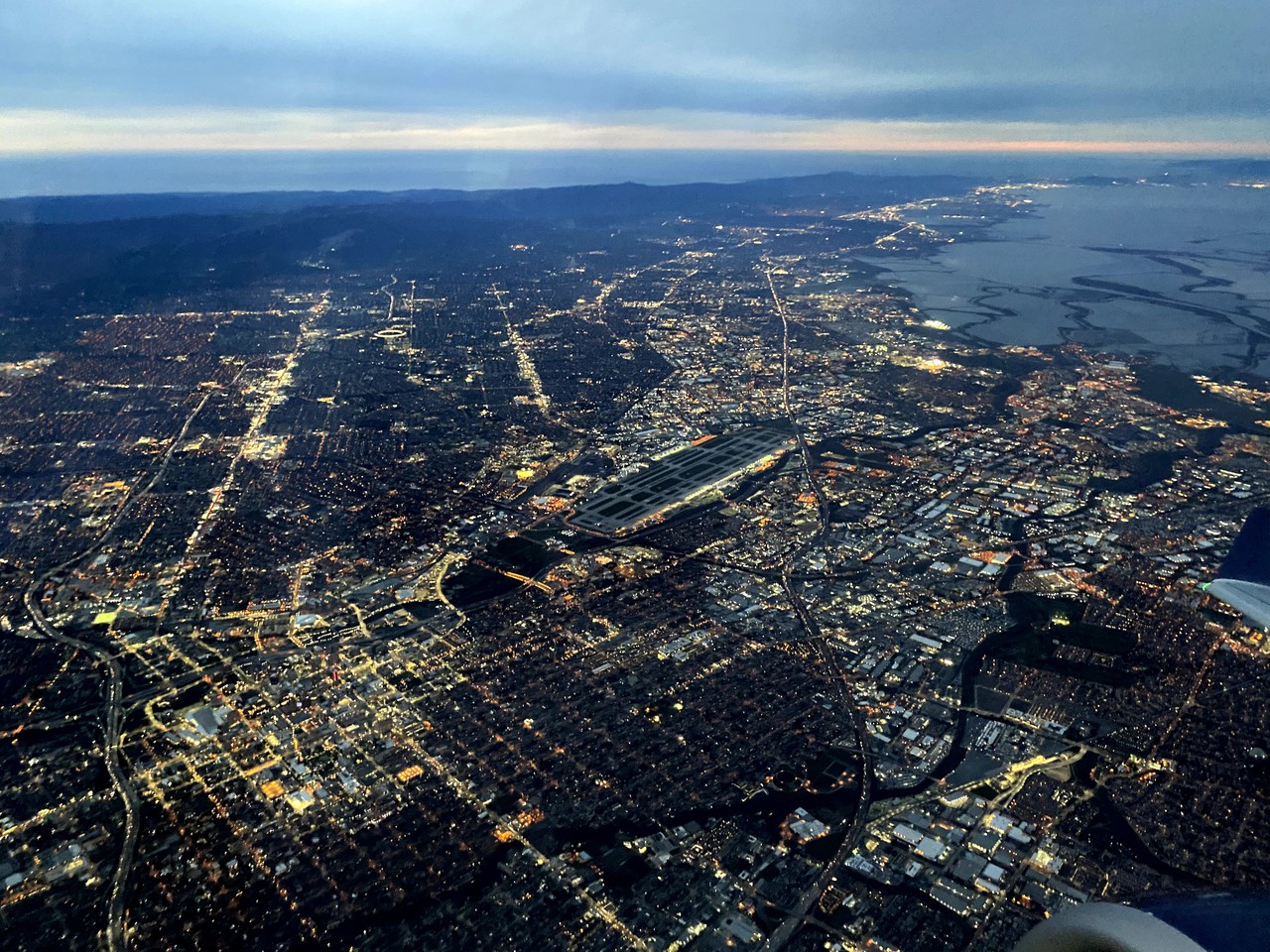 The IFE was definitely the most modern component of this aircraft, and the flight tracker had my attention the entire flight. There were SO many features to explore; I was definitely sad that this flight was only 2 hours long. 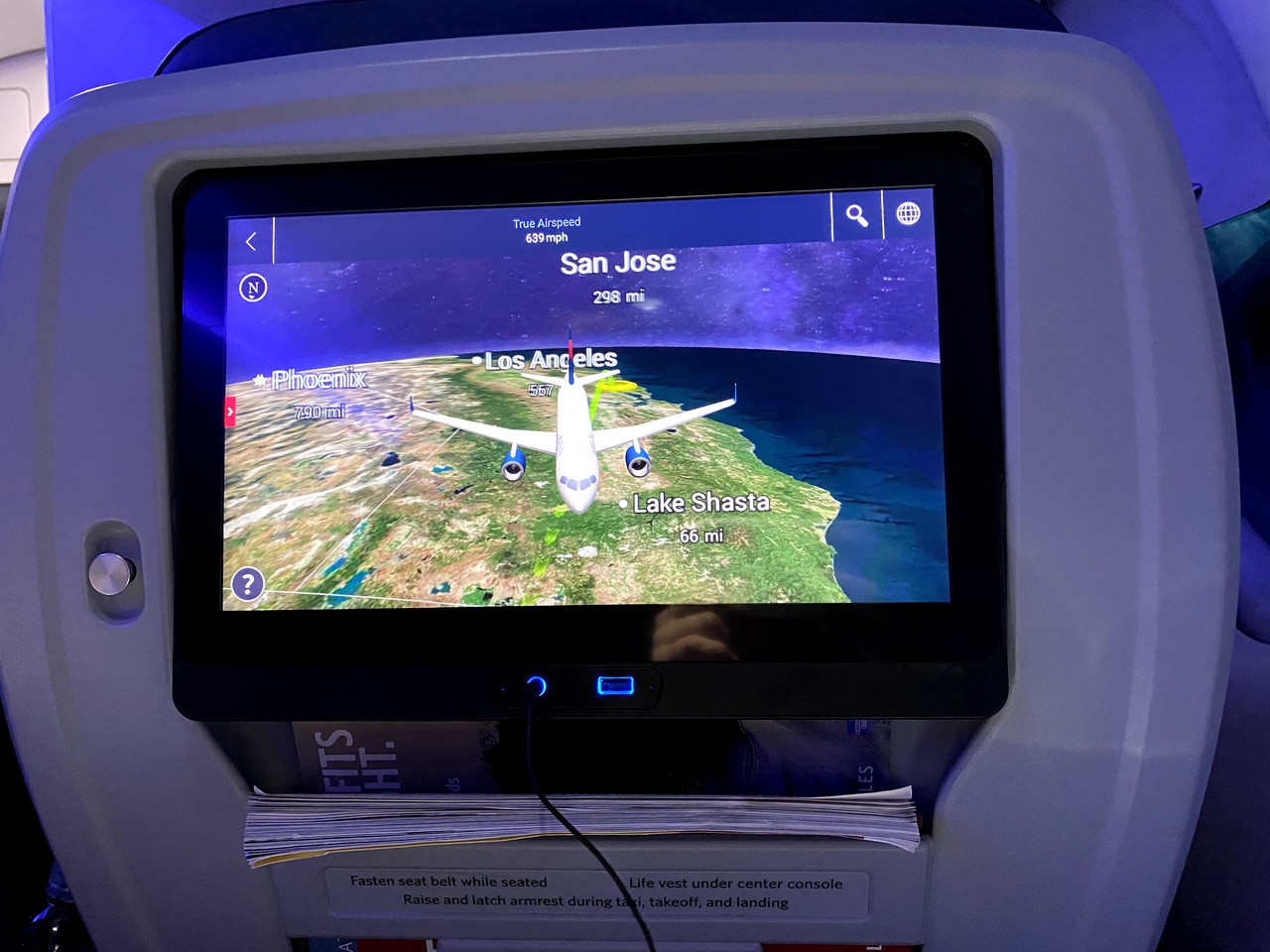 Dinner on this flight back was Italian Pork Meatballs with cheese, kale, spinach and a vodka buffalo sauce. It didn't look very appetizing, and I was expecting pasta with this dish, but there was none and was graciously disappointing. 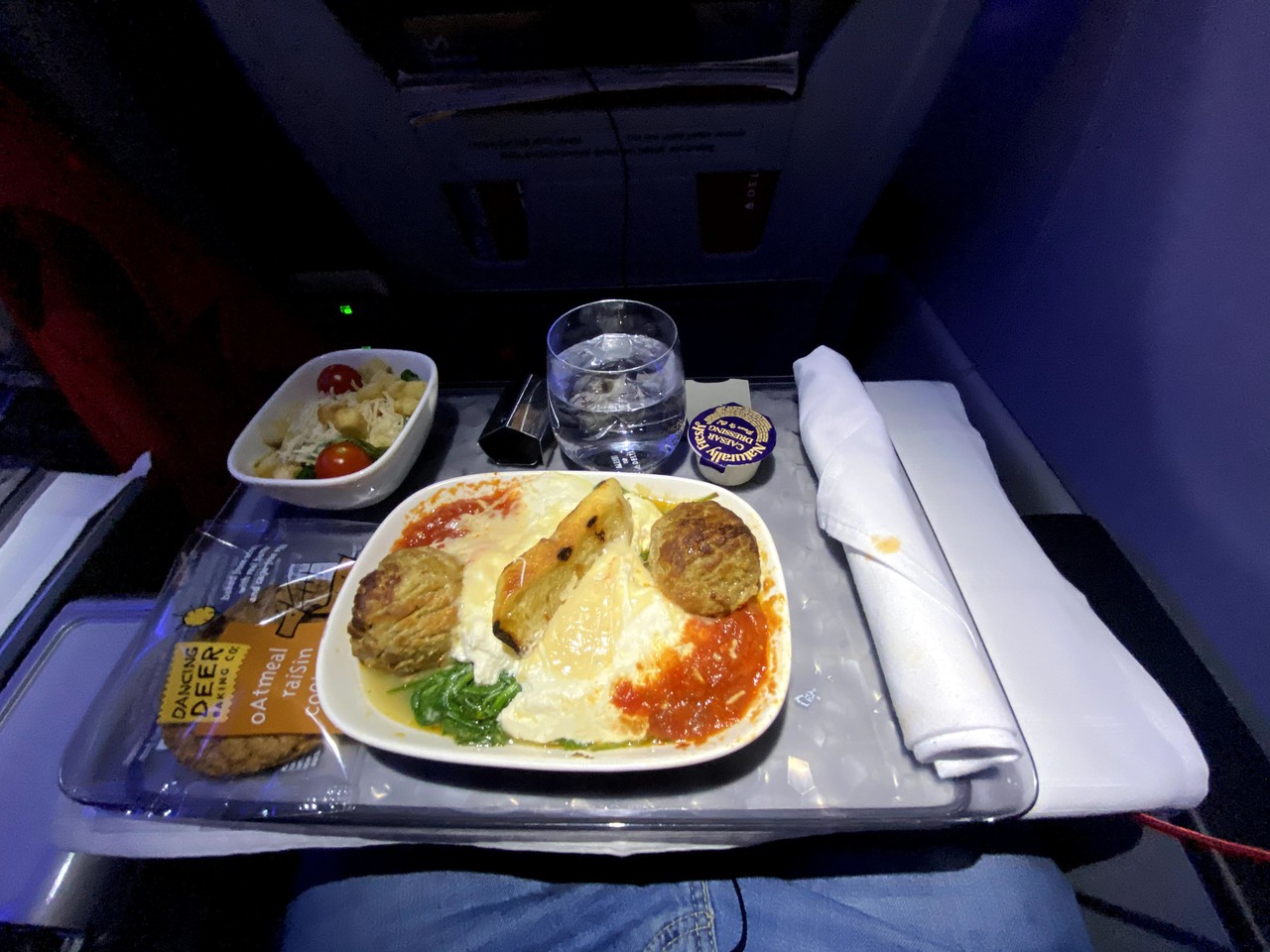 The diner service lasted just over an hour, starting about 20 minutes after takeoff, and ended just about mid-flight. I found it to be rather quick, given that the cabin only offered 12 seats total and there was one lead FA working our cabin. He was very friendly, and was happy to chat with me and my seatmate about the features of our seat, to welcome us onboard for both being SkyMiles members, and to let him know if we had any other questions throughout the flight. Very attentive service, indeed. Props to Delta.

Snacks were distributed from the basket about 30 minutes after meal service was completed and it was at this point we only had about 45 minutes left in the flight. Cookies, crackers, and various fruit were available for snacks. There was no second drink service following dinner. 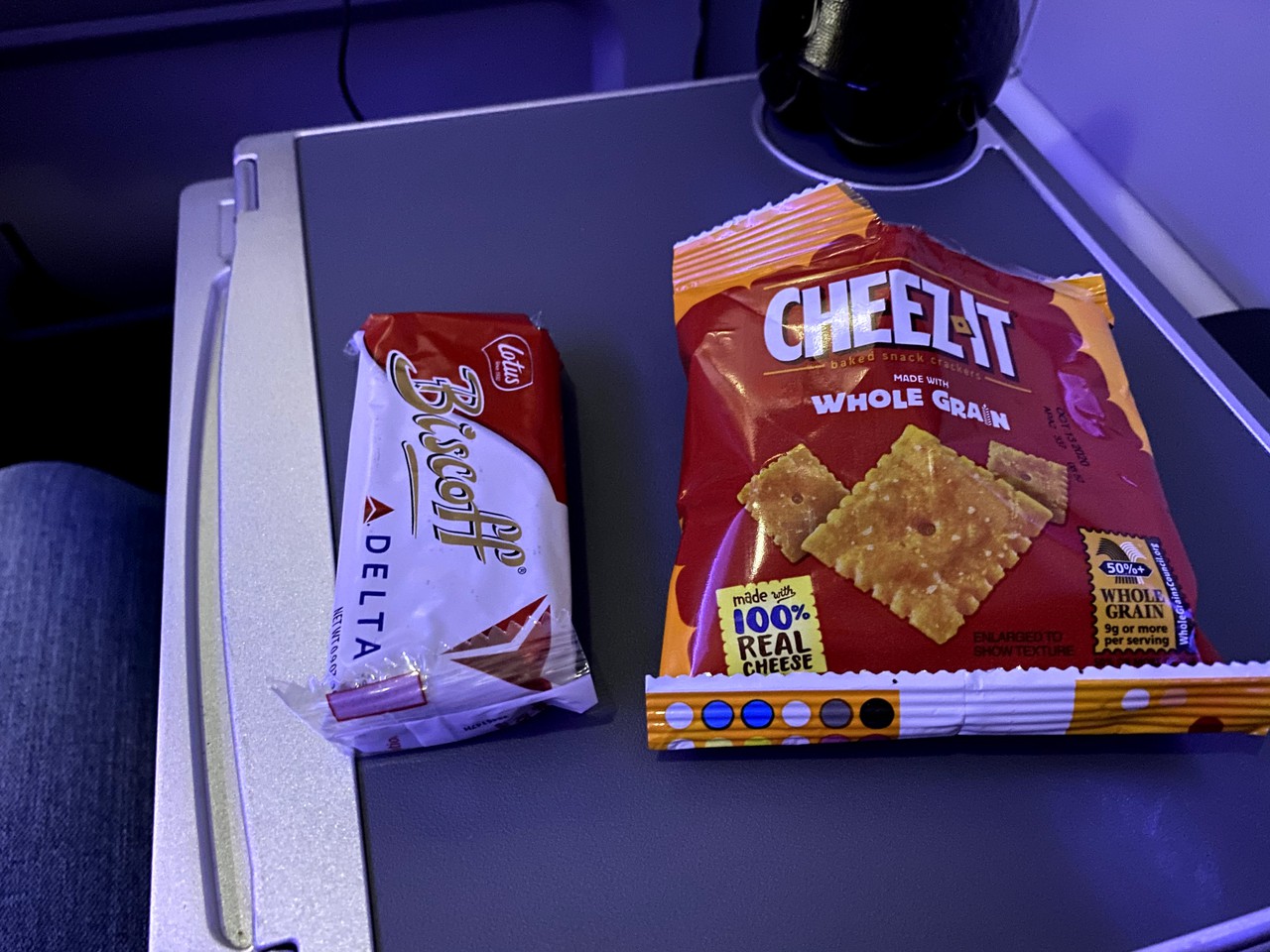 The IFE was probably the best part of the "in-flight services" of this flight and I enjoyed the amazing features in the Airshow program. This module showed a 3D model of the plane with our altitude, heading, speed with cockpit-like indicators in the bottom right. Delta has really stepped up their game with these new Satellite IFEs. 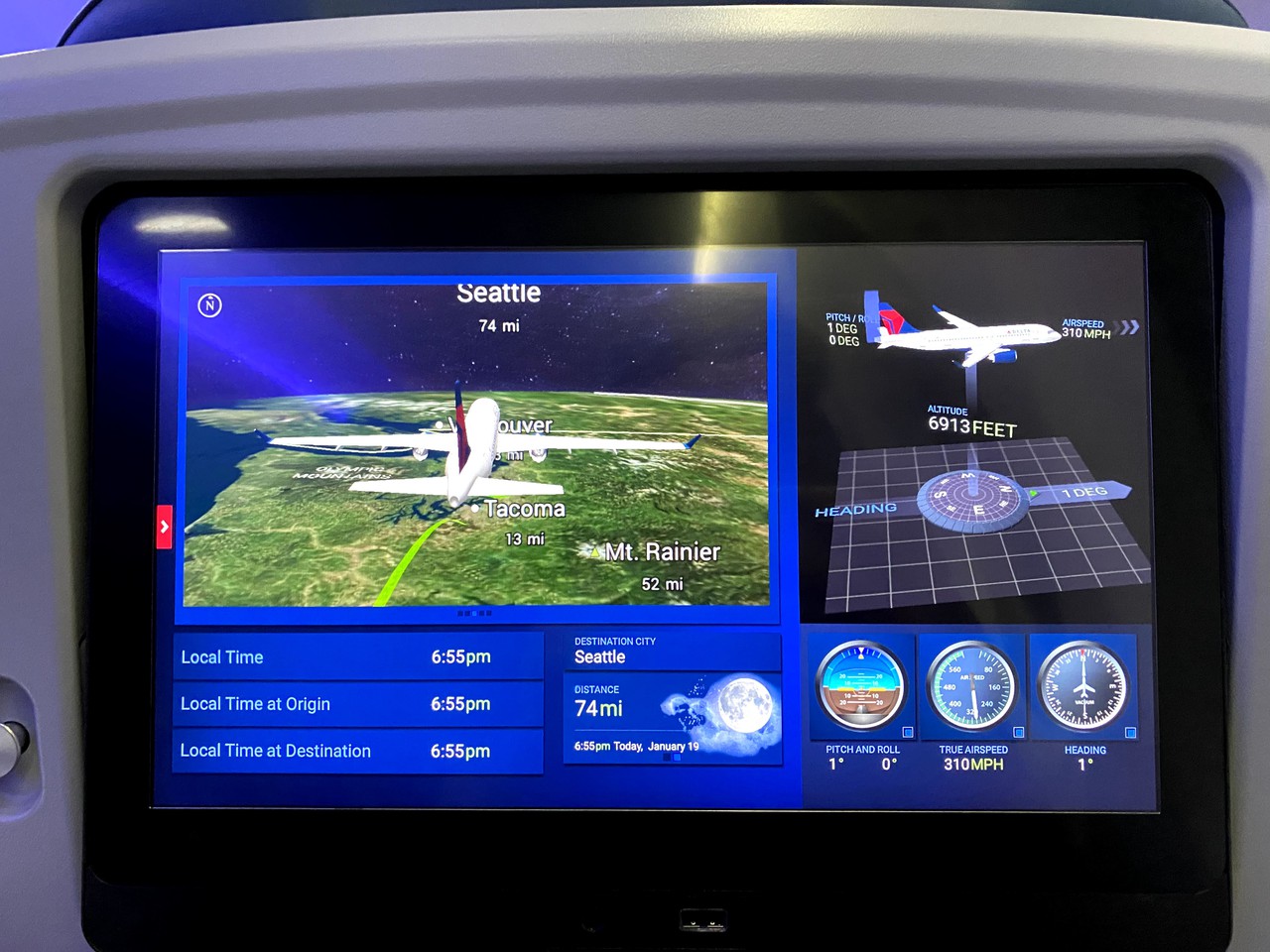 Getting approach photos here were really difficult. Downtown Seattle and the lights glimmer on our approach, we approached SeaTac from the south, flew past the airport on the west side and flew right over downtown. Being from Seattle, it truly is a beauty to see your city all lit up at night. 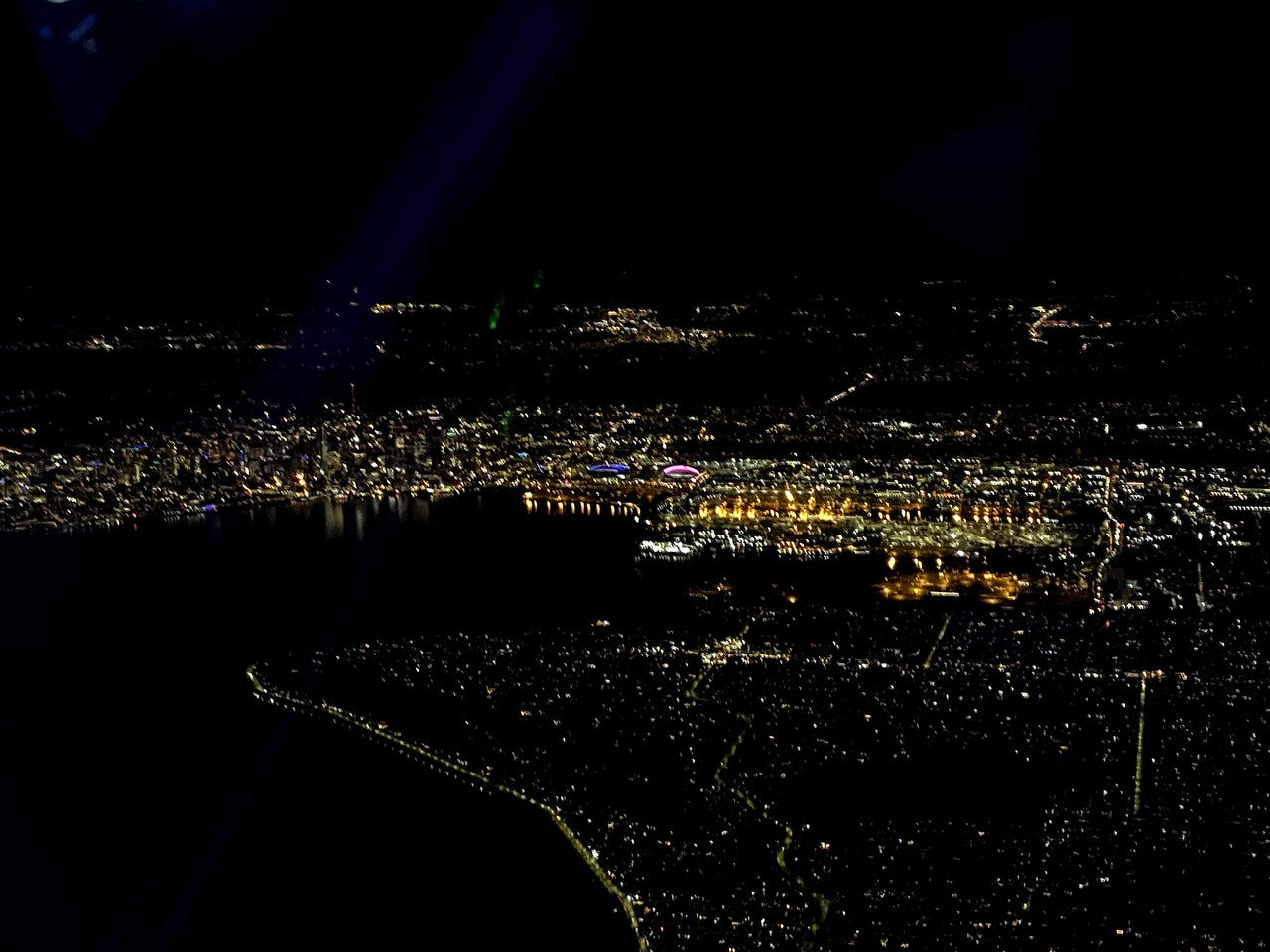 We landed just about on time right at 7PM on runway 16R, our shortest, western-most, newest runway at SeaTac. The approach was really smooth, but man, did our crew put that plane down hard! I heard a bunch of water bottles and phones go flying onto the floor as we kept on down the runway, it was pretty intense!

Arriving at Gate A3 just a few minutes early, we didn't have a gate crew yet, so we had to wait for them to show up from the next gate over and then they'd open up the doors. This flight was 100% full, so I am glad to have been sitting up front, but for those in coach, it definitely doesn't seem as bad as sitting in the back of a full 757-300, so the small mainline jet experience is definitely something to think about when you're on a long, full flight. 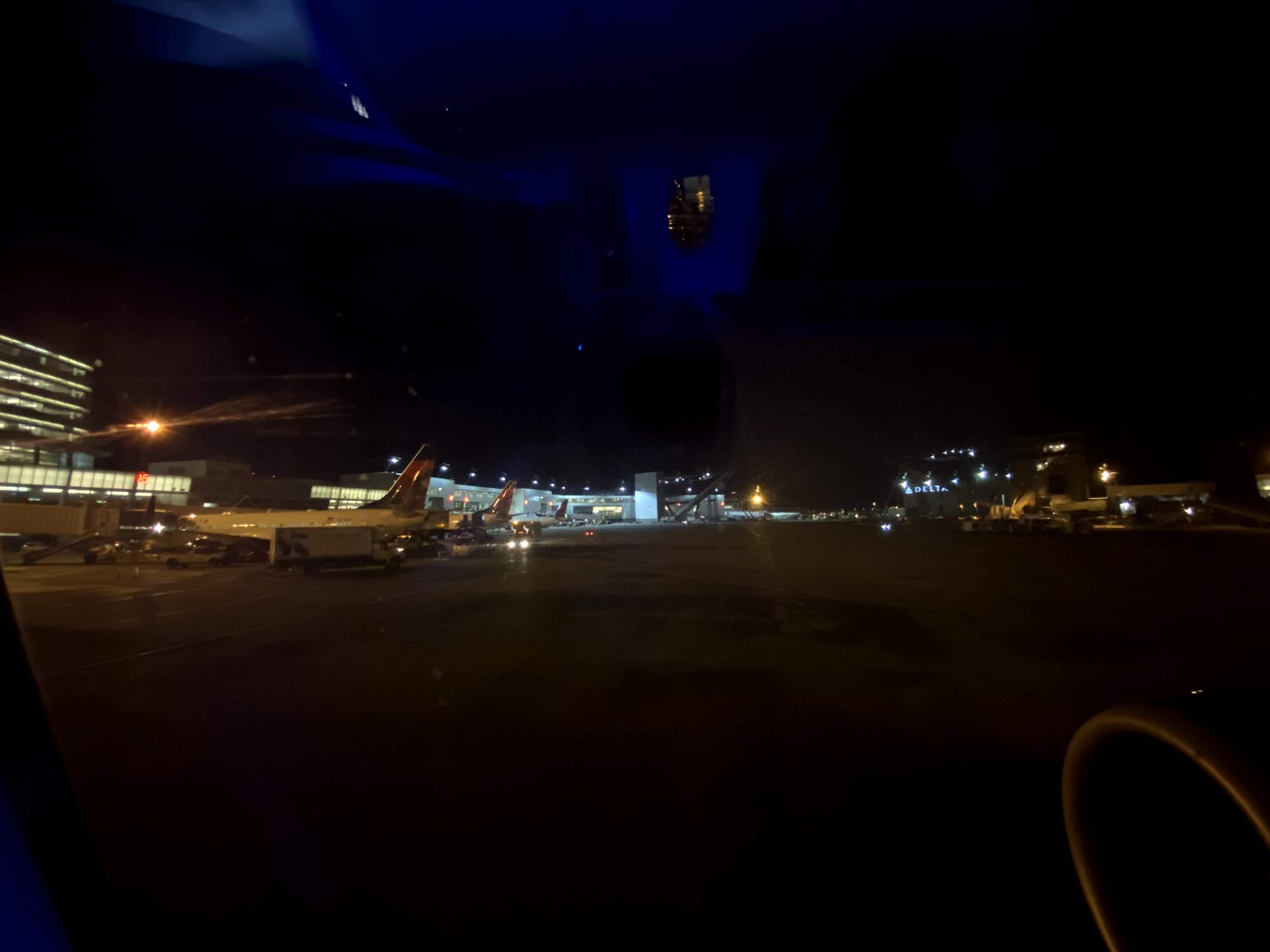 The SeaTac terminal is always admirable and today was no different. A short walk from Gate A3 to baggage claim, I didn't have any bags to claim so it was straight to pickup for me. Baggage claim is located on the lower level, down the escalators in the background and a short walk to Delta. Way to be back home, and extra thanks to Delta for providing such a memorable, welcoming experience onboard their newest jet. 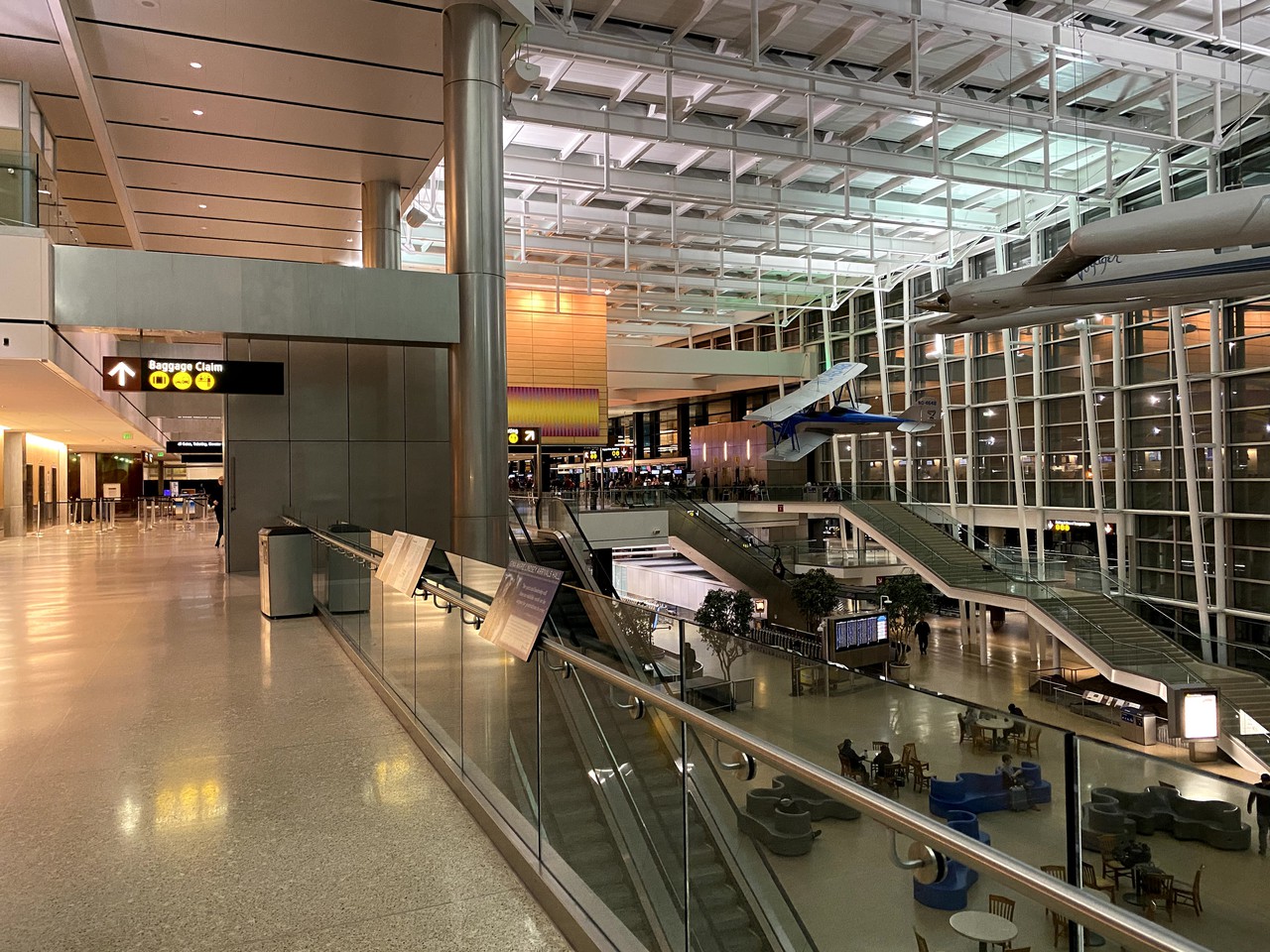 The Delta A220 is truly a modern marvel. The cabin experience throughout the aircraft, the aircraft itself feels modern, open and welcoming. Featuring the signature Delta blue and red cabin colors, its familiar to any frequent flyers and I enjoyed it just as much. One of the best additions to Delta's fleet, the A220 has stepped up to fill a regional role from Seattle to replace many services previously operated by the Boeing 717, from which the A220 is a huge step above. I enjoyed this product way more than I thought I would, the IFE and welcoming crew helped me feel so much more welcome and able to enjoy myself on this quick flight. Offering all the same amenities as most other mainline jets like the 737 and the A320, I would 100% go out of my way to fly the A220 if I could. Once again, I extend an offer to all you aviation enthusiasts out there to try this product, and I can guarantee it will be every bit worth trying! Finally, props to Delta for introducing such a beautiful aircraft to their fleet, and I cannot wait to see expanded A220 service to Seattle in this future; moreover, I cannot wait to fly this aircraft again! Happy flying everyone!

He wrote 7 reviews about 3 airlines and 8 airports.