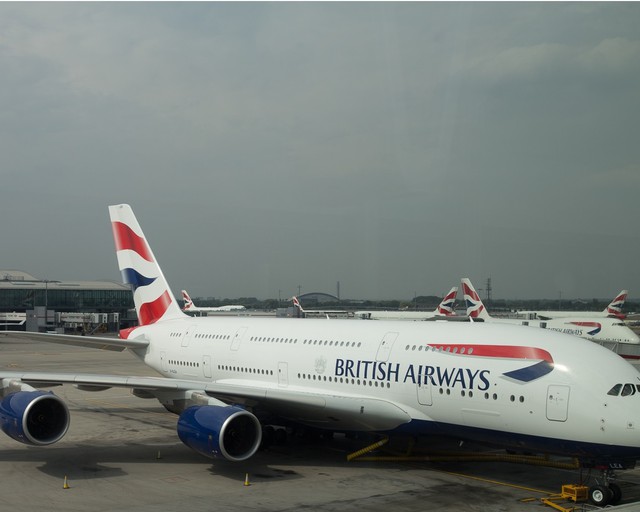 #56 out of 80 Airlines A minimum of 10 flight-reports within the past two years is required to appear in the rankings. 893 reviews

My Partner went to give training to his team in Singapore, his company got him to stay at the Carlton with a lot of nice work events so i took this opportunity to come along and enjoy Singapore! Unfortunately we were travelling on different classes but so here is the flight report! 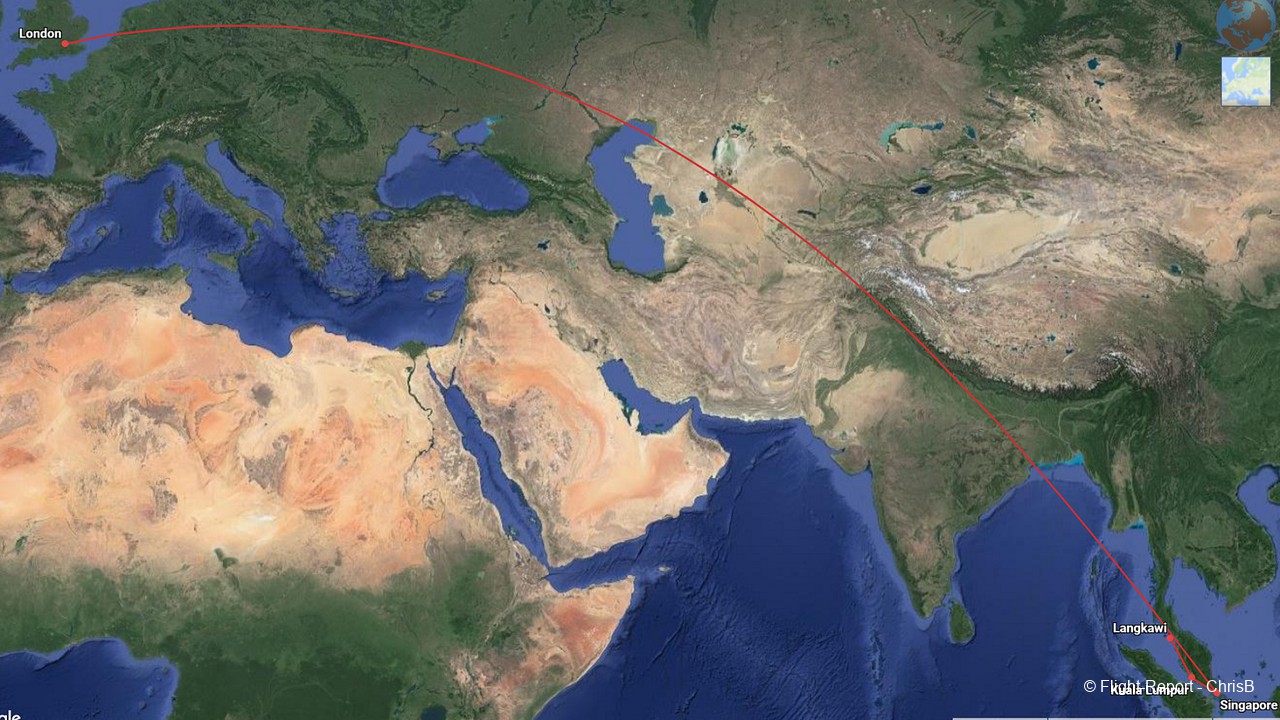 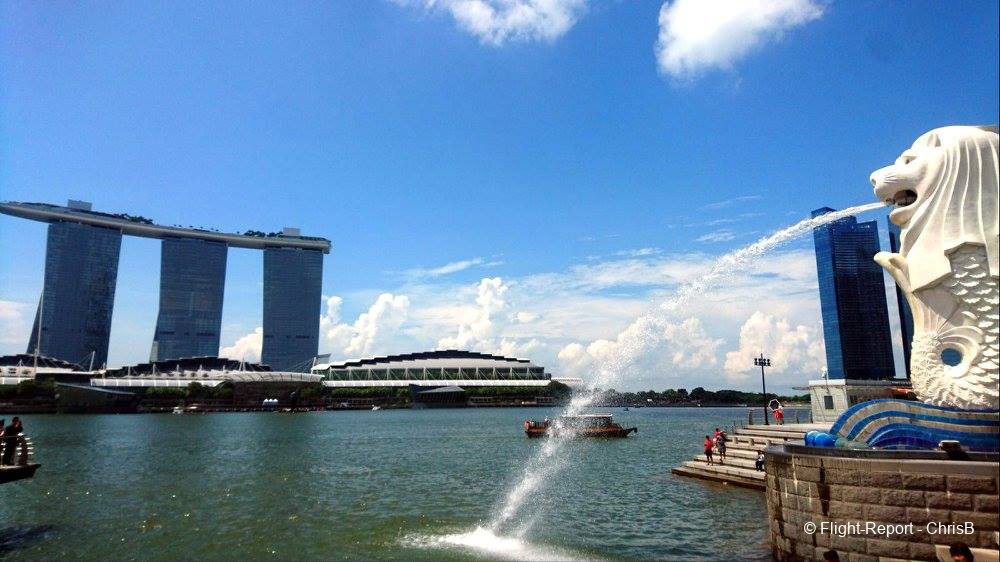 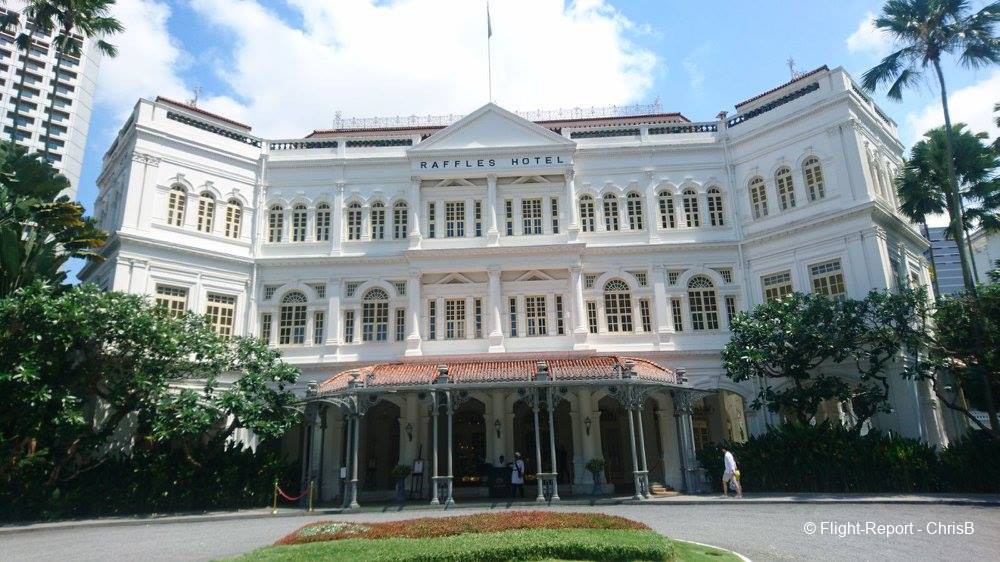 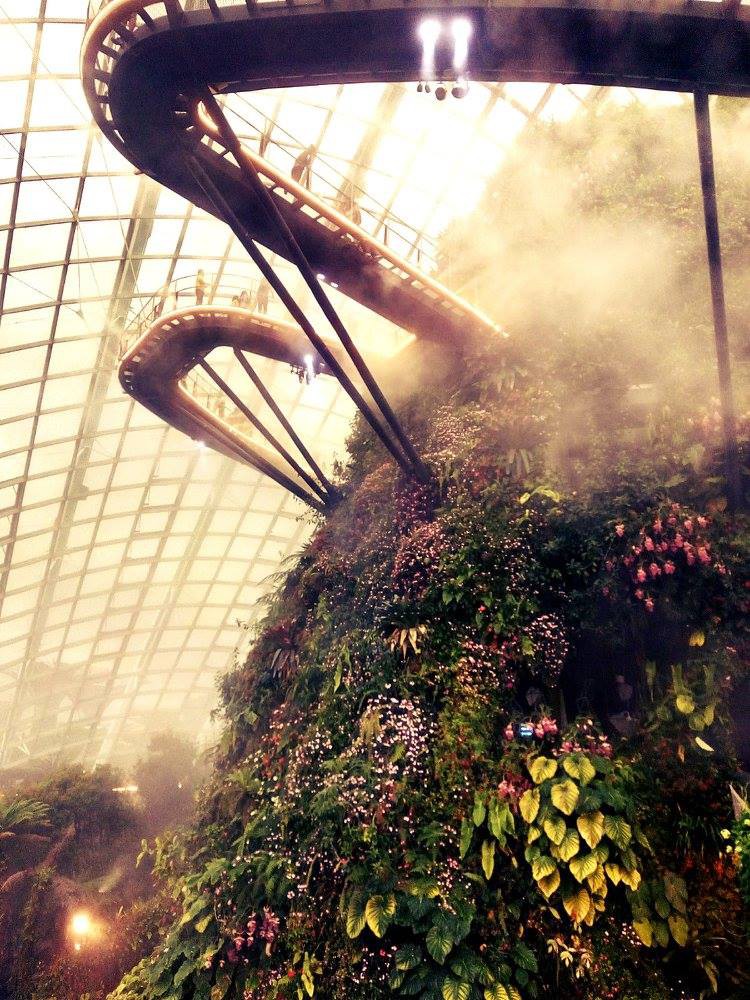 The beautiful gardens by the bay British Airways gives the possibility to their customers to group two avios account under a single household account, which meant that was great news for a potential next holidays!
I chose the basic tarif that still included a 23kg piece of luggage on the hull. I checked the cabin seat mapping on BA website and seat guru to try to get the best economy seat on the upper deck. 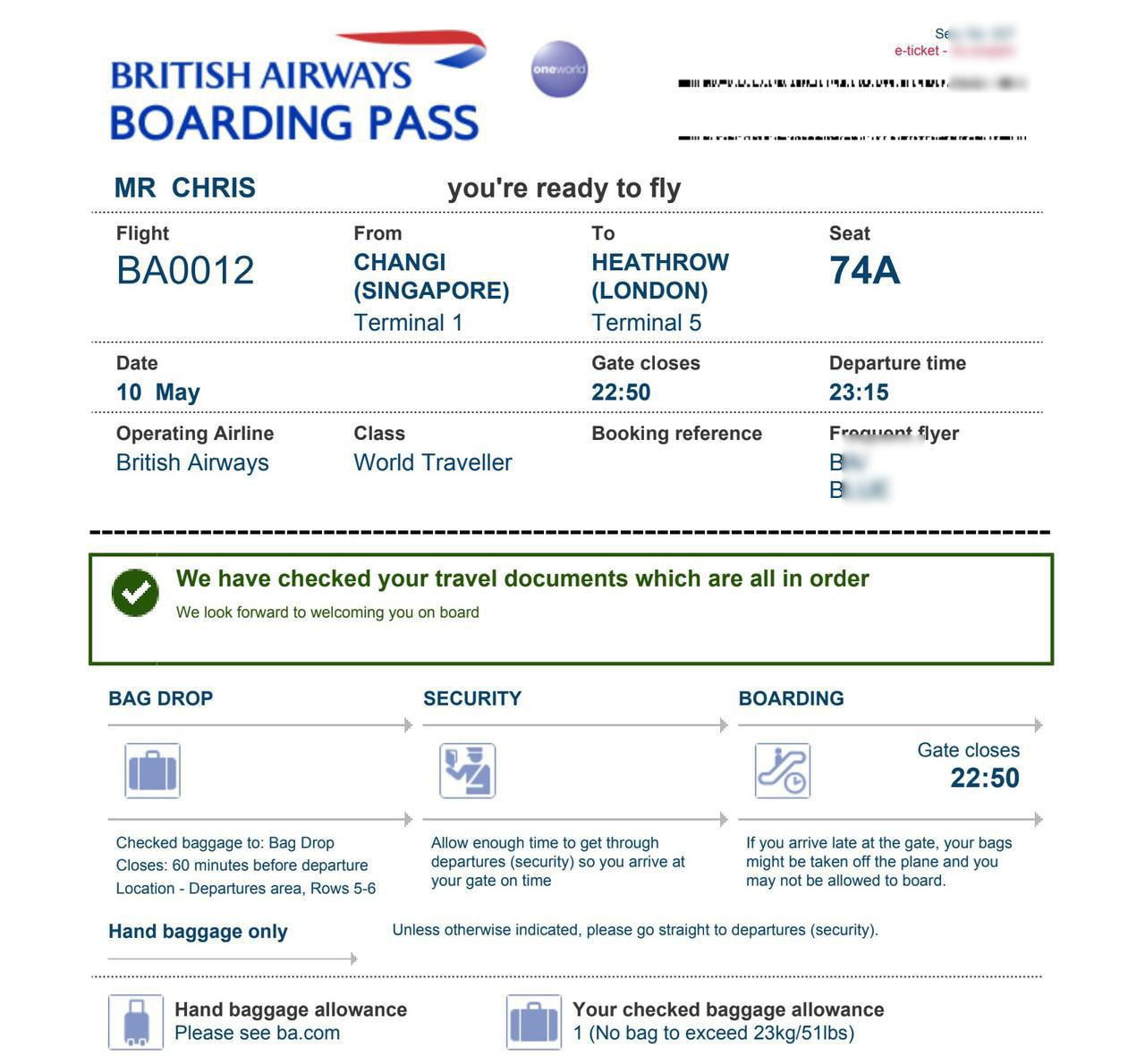 We made our way to Changi airport by Taxi, and it took us less than 40 min. <b style="font-style: italic;">The AvGEEK bit
Changi Airport is the sole international airport of the city state of Singapore. It is well known amongst travellers for its nice and quiet environment, featuring aquariums, waterfalls, trees, relaxing features, a noise absorbing capret and even a swimming pool! It has been rewarded best airport in the world for the 6th consecutive year in 2018, a world record for any airport. The airport is mainly used by long-haul planes and is built to organise quickly turn overs. It is home to the longuest flight of 19hours to New York Newark. The airport is the hub for Singapore airlines.
➡ The airport was opened in 1942.
➡ There are 2 parallel runways and the airport features the following buildings:
➡ Terminal 1, in a H shape, is mainly home to Skyteam and Oneworld members
➡ Terminal 2, in a L shape with two extra "antennas" is mainly used by Singapore airlines and some fellow Star Alliance members.
➡ Terminal 3, in a L shape too, is home to every other airlines.

After going through security, we had our boarding passes stamped at passport control. 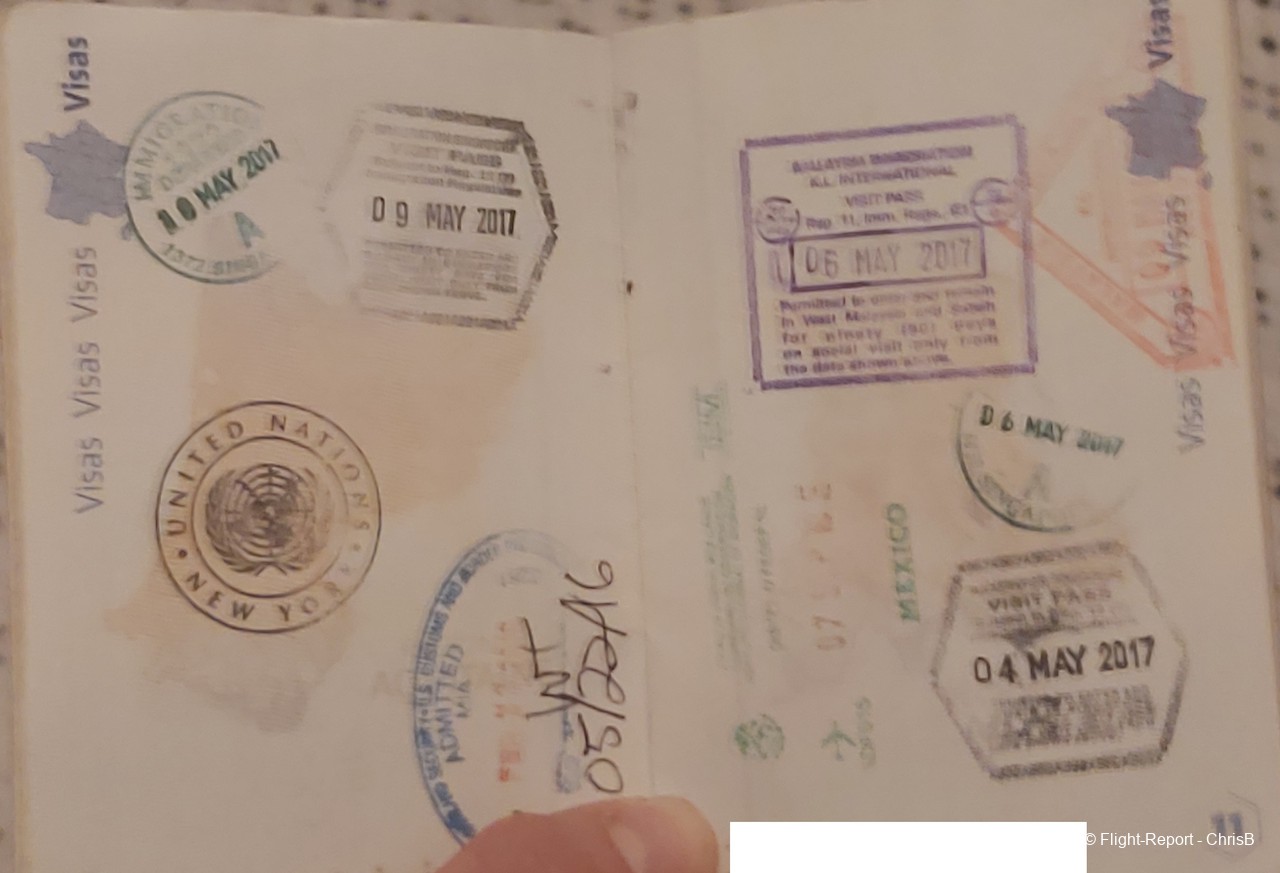 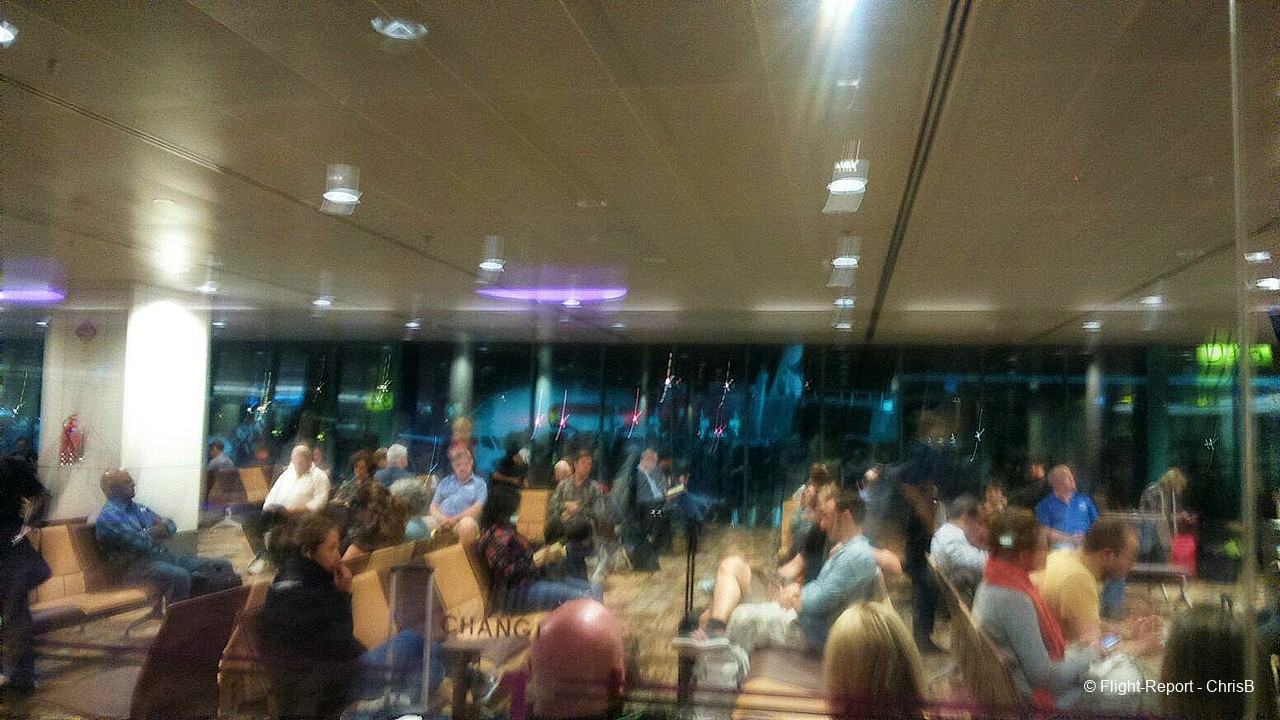 We dropped our bag off at Terminal 1 at the BA counters and as we were early (on purpose) to enjoy the World's best airport (for the 7th consecutive year, as per Skytrax), the food galleries, the large amount of gardens and of course the huge waterfall! 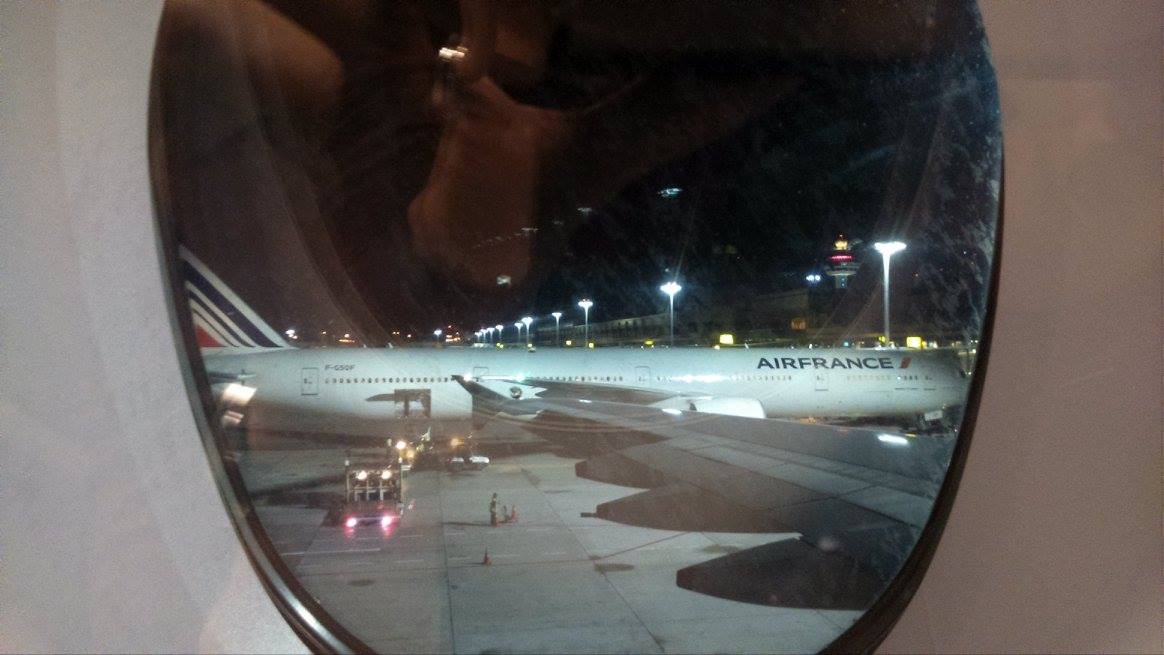 A view on our french neighbour from the upper deck.

As explained before, my partner was seating in World traveller plus (premium eco) and I in world traveller (eco), behind the curtain.

Unlike fight BA15, flight BA12 does not come from Sydney but departs from Singapore, although it felt there were still a lot of people that were connecting on board.

My seat was clean but with a pitch of 31, which is below average, and wasn't particularly confortable however it felt new. The great benefit of the economy class on the upper deck is the smaller configuration 2-4-2, instead of 3-4-3 on the main deck, making it a little bit more 'cosy'. Another good thing, when you have a window seat like I had on the upper deck is that you have the side cabinet under the window, just like on the B747s, that allows you more space to put your personal items away. 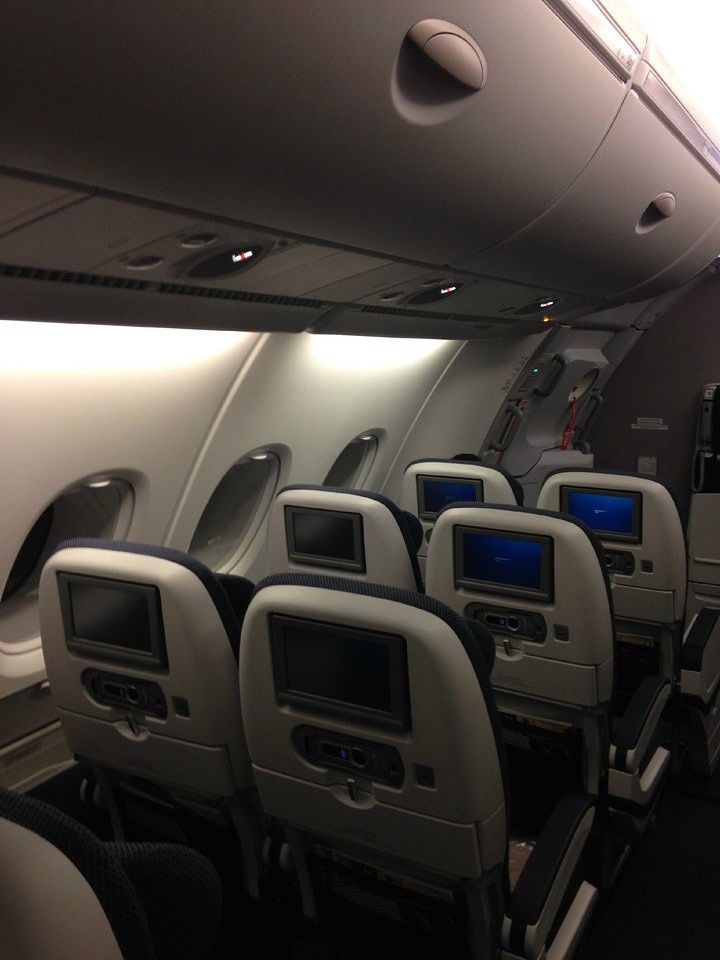 The classic boarding music of BA was played, the Flower duet by Lakme.

Just before departing, I asked my other half if there was any free seats next to him. And so, knowing that there was one, I wore my best smile on, I kindly asked the crew if I would be able to join my partner in premium economy for some time, and to my great surprise she said yes! However she told me I will not be able to sleep there just for the first hours or so..

After push back we had the regular announce by the captain and the IFE displayed the Safety Video of the time, the well know cartoon-ish one.

We left terminal 1, taxiing towards the runway 02L.

After take off and the seat belt switched off passed 10,000 feet, the crew quickly started their on board service offering us champagne (I was allowe to seat on premium economy next to my partner) and snacks. 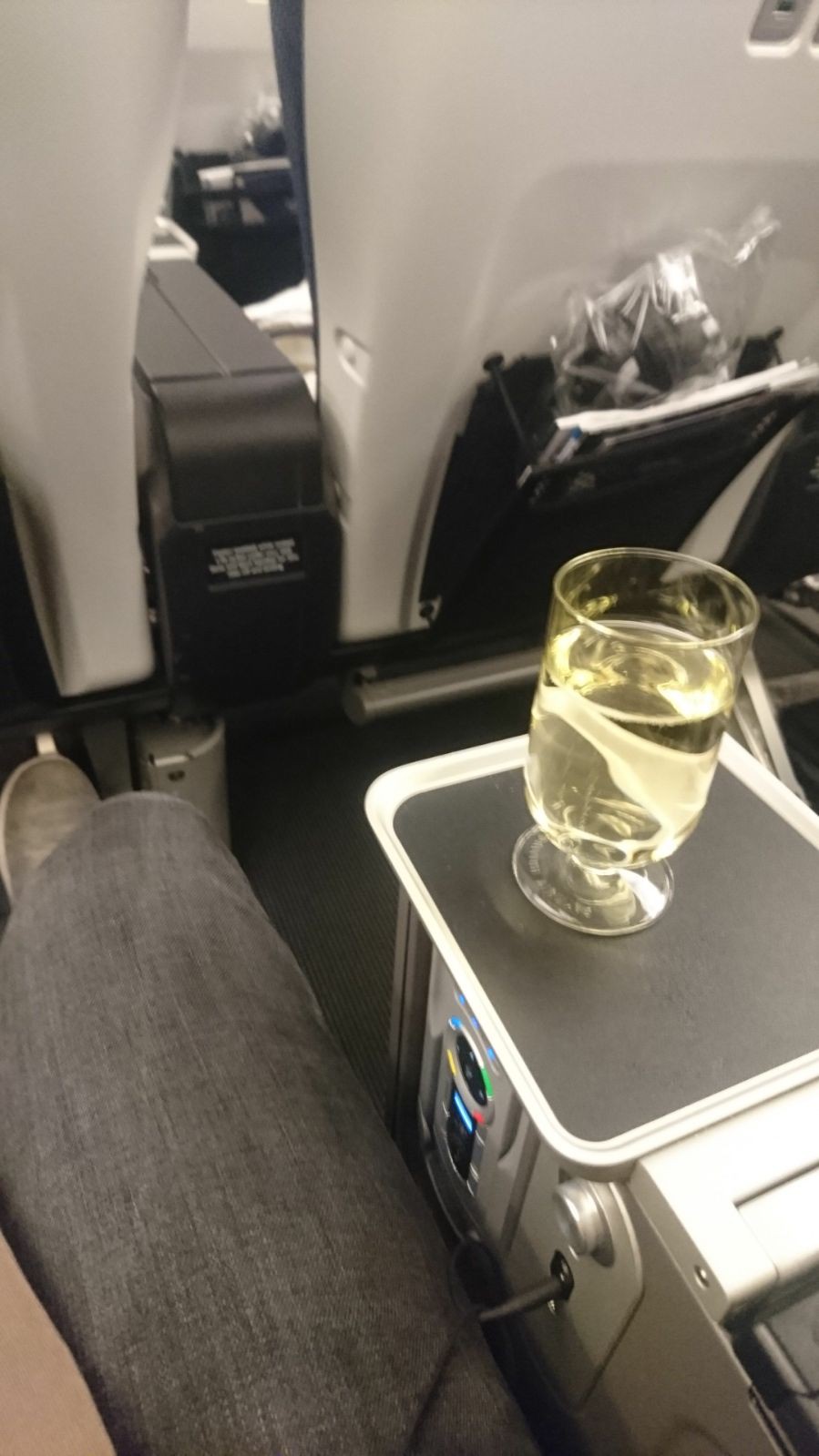 I had the chance to stay for the food service, which was really better than what I had on the world traveller class on the way out. We had some kind of Beef Bourguignon as a main with salad for starter and some sort of yogurt for dessert. After this point, I was asked to go back to my seat 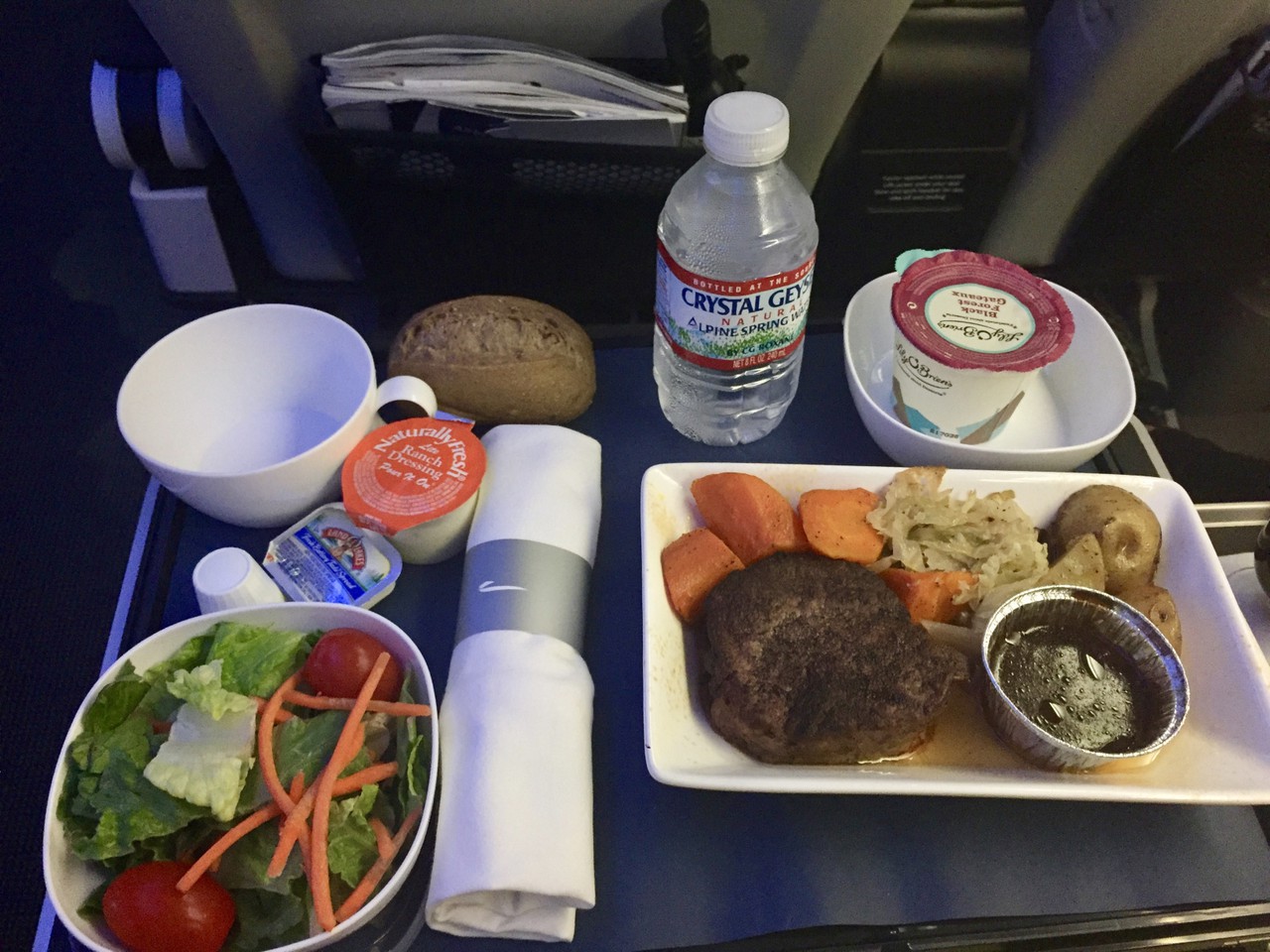 Now that I was back to my seat, we were communicating with the cabin message system 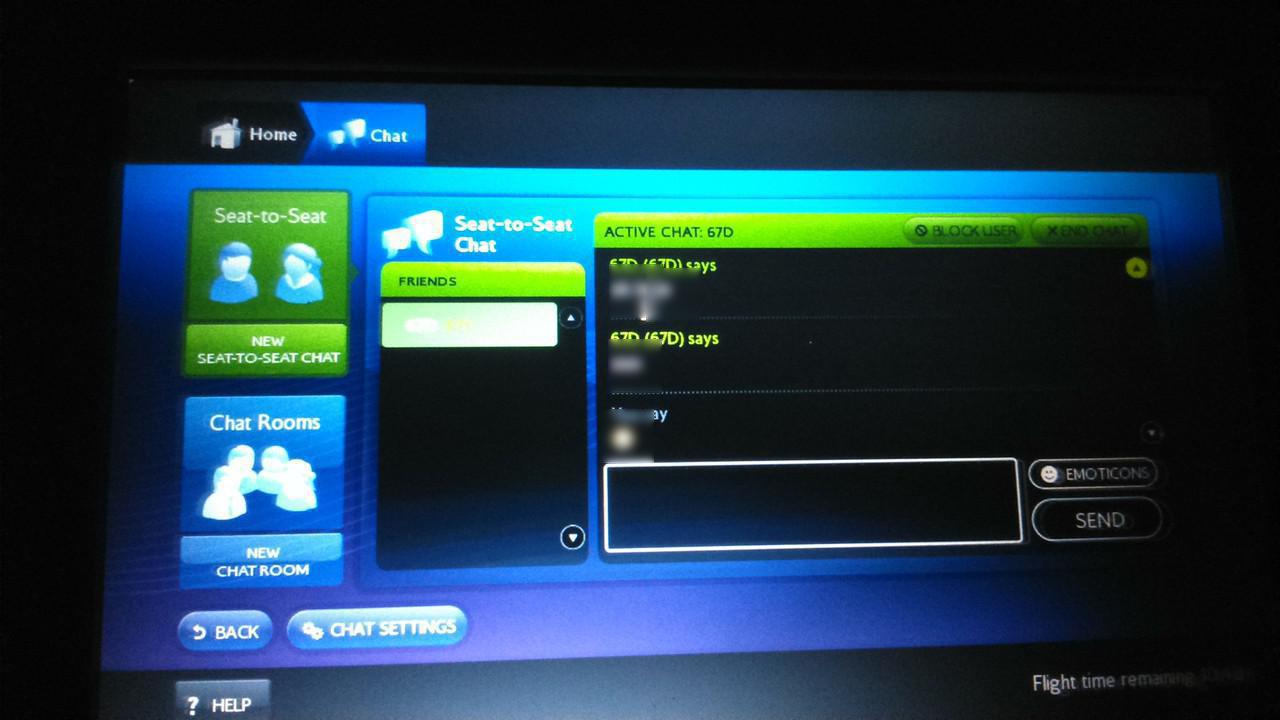 IFE screen was ok, with an USB socket to charge my phone, the size of the screen seemed fair, and the collection of movie was more comprehensive than on the way out.

British Airways offers two magazines: the highlife magazine for destinations, news and airline bits and the business magasine, targeting the entreprenarial clientèle. We can only regret that BA doesn't present its fleet on the magazine. 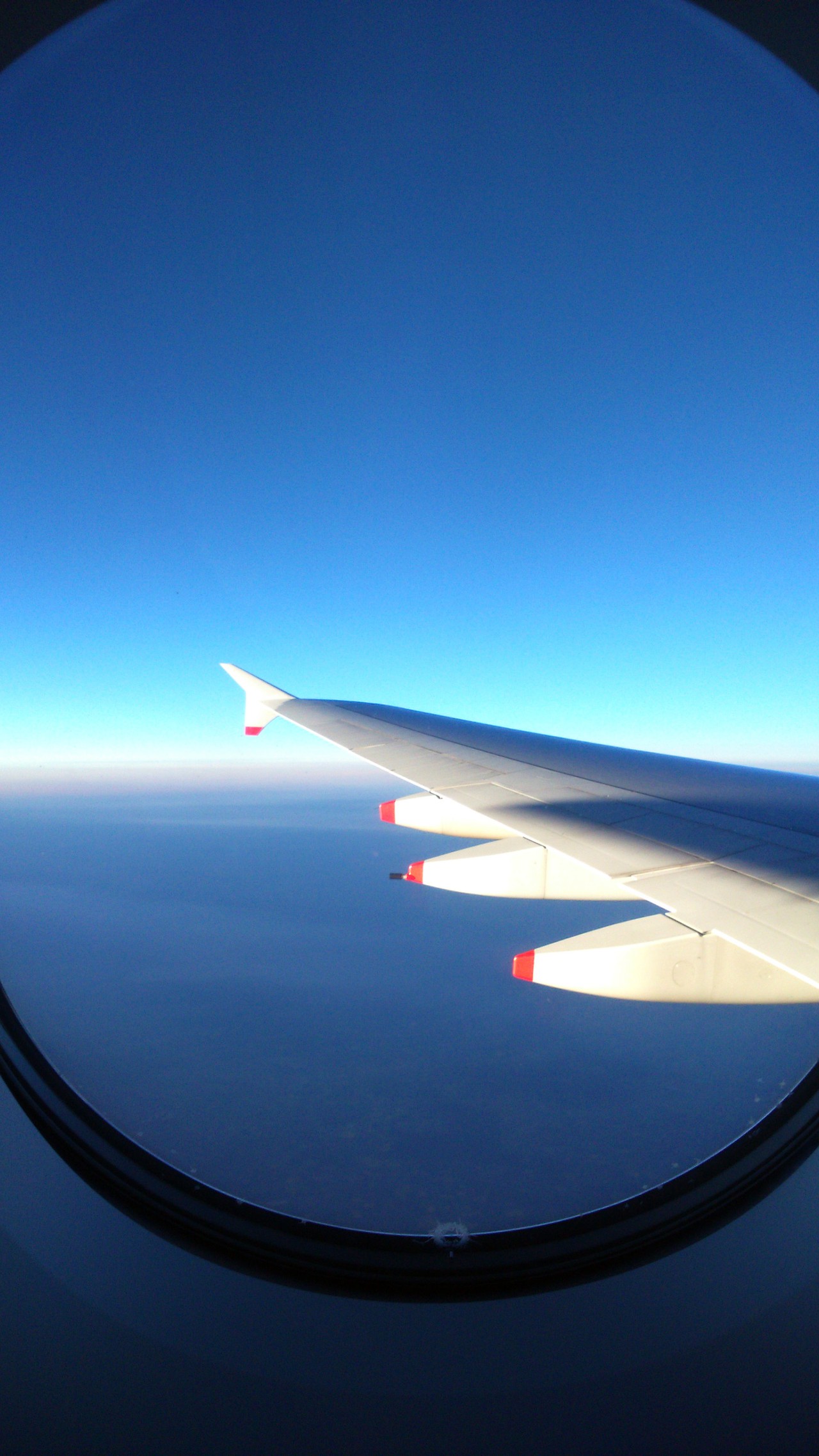 My neighboor went to seat somewhere else which meant that i was practically almost in Business, being able to extend my legs and have a nice quality rest. What also helped I guess is that the A380 is a really quiet plane, even more so than the B787 in MHO.

We were served breakfast a few hours before landing, and just like on the way out, the breakfast was VERY average if not bad.

The descent started about 40 min before landing, and we landed on 27R, with 20 min ahead of Schedule, and taxiing towards terminal 5. 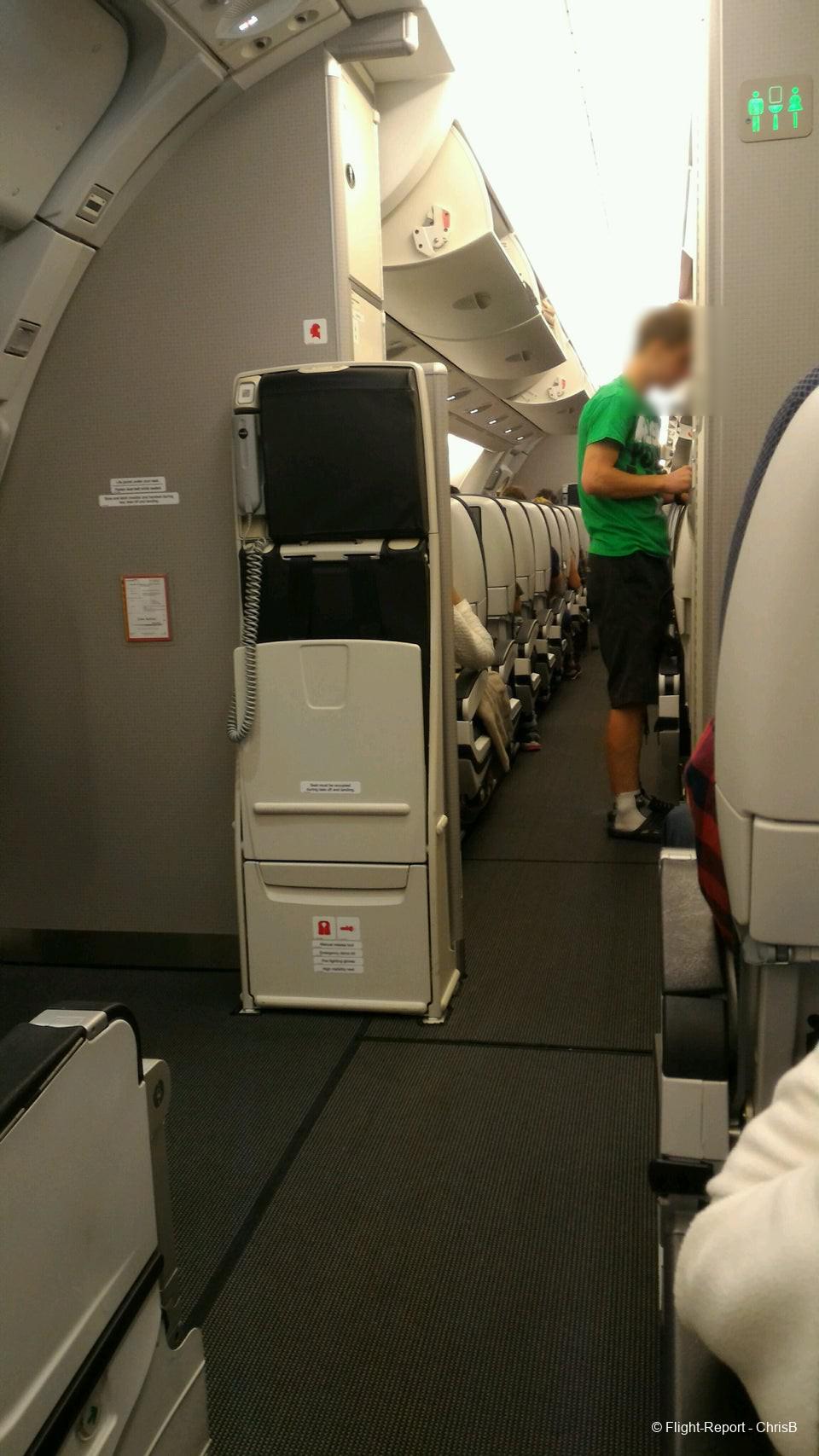 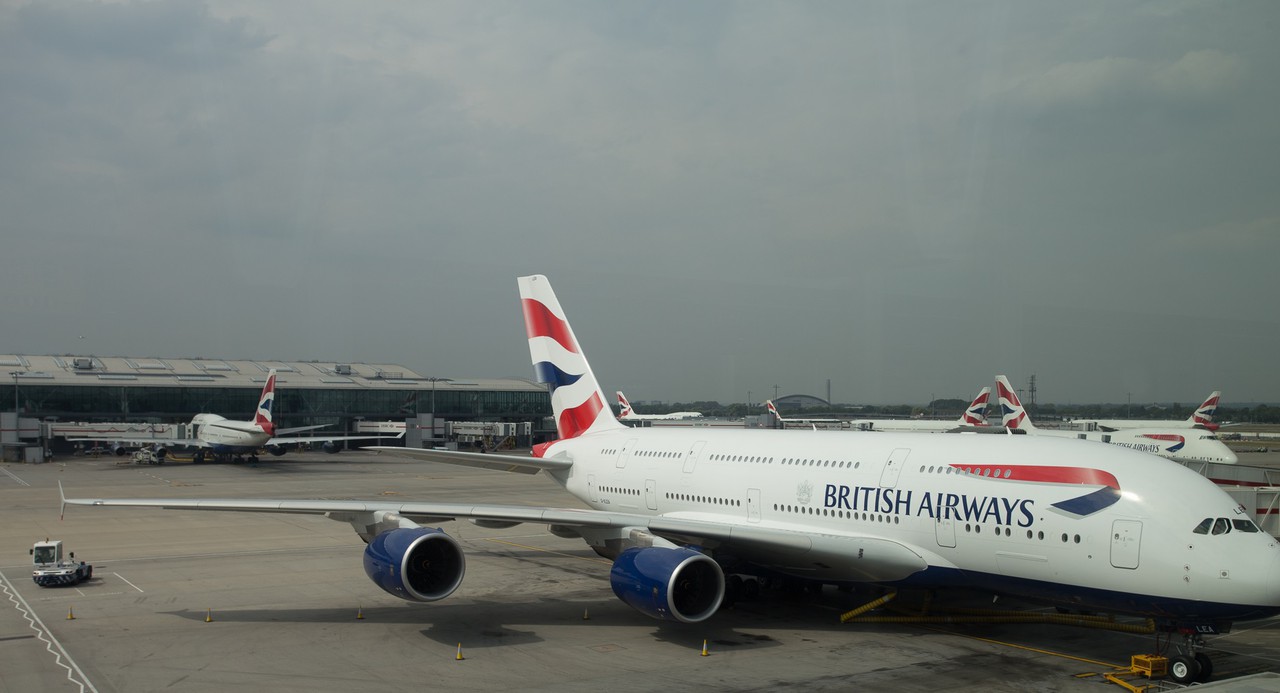 I was expected to arrive in Terminal 5B or 5C like on the way out but to my surprise we arrived at Terminal 5A. Deboarding the plane was fast, and as this part of the Terminal is the most efficient of Heathrow, you very quickly reach the luggage reclaim belt, without going through transfers or long walking through corridors.

In conclusion:
The A380 is a fantastic plane, very stable, and quiet
The crew was very professional and kind, as they offered me to stay for a while in premium eco (they could have rejected my request)
Food in economy was below average
Changi Airport is a fantastic experience.

The contributors of Flight-Report published 15 reviews of 3 airlines on the route Singapore (SIN) → London (LHR).

The average flight time is 13 hours and 22 minutes.