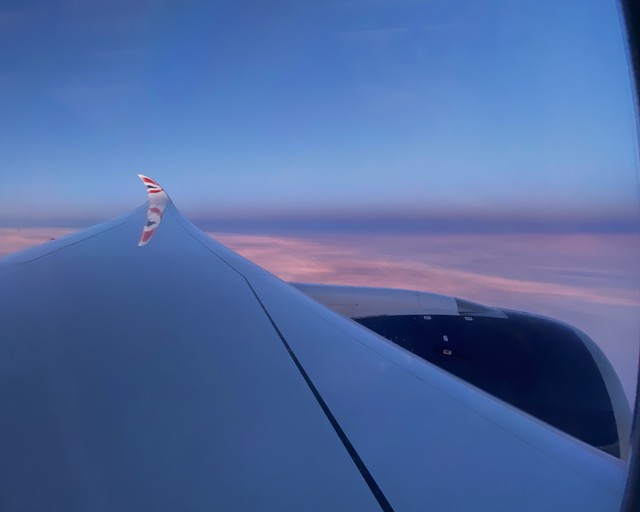 Hello all and welcome to my first trip report and the first BA A350 WT+ review on Flight-Report.com

I have been viewing and reading Trip Reports for a while now and have been long awaiting my next flight to write my first TR.

I booked with British Airways in July this year for travel on December 7th 2019.

However, I was pleased to see when booking that it was planned as the long awaited A350-1000.

Skeptical as ever, I went ahead and booked the flights - aware that their might be a huge chance of aircraft change as the first A350 had not yet been delivered to British Airways at the time of booking.

BA A350 (WORLD TRAVELLER PLUS)

British Airways A350 started operating this year on selected routes being Dubai DXB and Toronto YYZ.

The premium economy seat comes with a generous 38'' Seat Pitch and 18.7'' Width, ample amounts for a medium haul 7-8 hr flight.

Starting from the bulkhead row 20 and ending at row 27, it is a small cabin with more personal service.

The downside, no toilets for WT+ .. you either have to secretly creep up behind the curtain to the Club World toilets or walk down past the mid section of Economy and join the queues.

Sat 7th 2019:
Our trip started from Aberdeen ABZ, this was a short 1hr flight on the BA1303 A321 aircraft, nothing remarkable to report about.

We used the BA Executive Lounge at ABZ on behalf of a friend i'd worked with back in my airport days, it was much appreciated and a nice touch to start our winter break.

Arrival into LHR was smooth, bags were already tagged right through to DXB so we headed straight to T5 Departure lounge.

I find LHR T5 is mostly expensive designer retail (Gucci/ Louis Vuitton/ Chanel/ Prada etc) not exactly what I'm in the mood for first thing in the morning, so we headed up to Gordon Ramsay Plane Food on the first floor, there we had some breakfast and cocktails while awaiting the gate information.

Mostly all long haul flights depart from either the satellite terminals T5B or T5C and accessible via the transit train underground, our gate was up as C56. 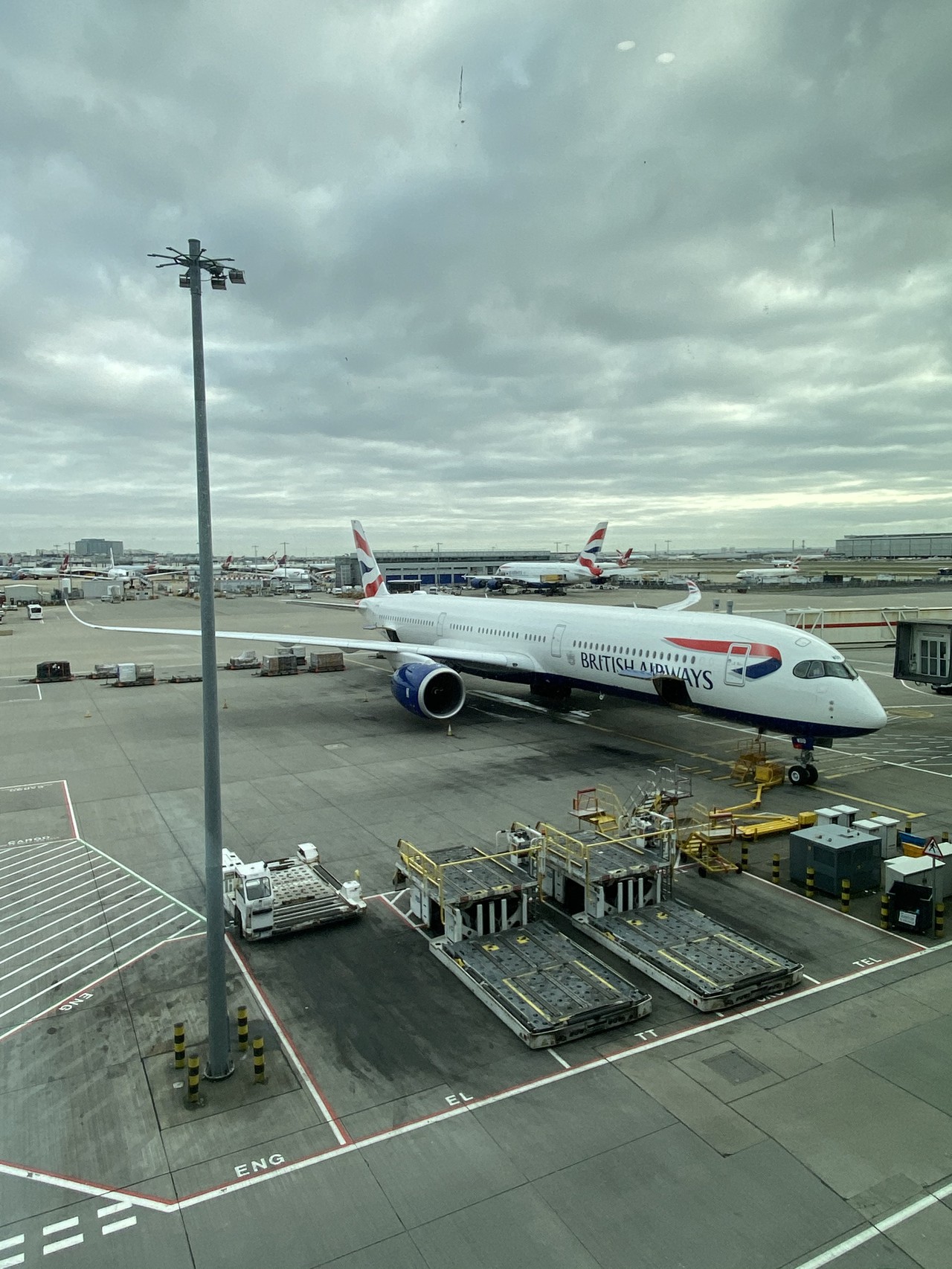 Just a day before, I had searched FlightRadar and BA107 was showing as the newly delivered G-XWBC - 1 week old!

Then on the morning of departure it had changed to BB, not to worry though, still a fresh aircraft in terms of other types in the fleet. 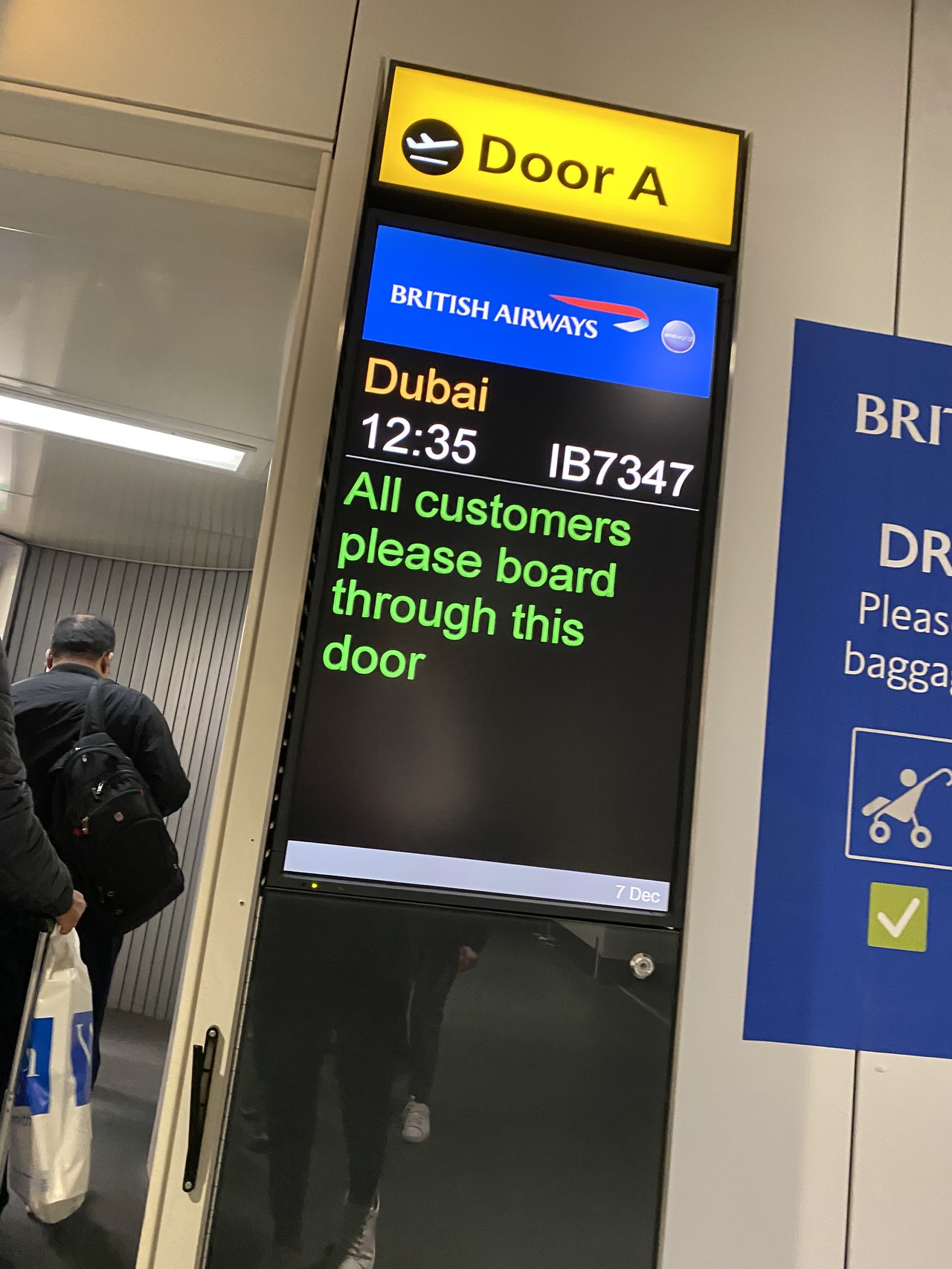 Boarding was all done via one air bridge, passengers were called by group numbers 1-5, WT+ is Group 3.

21A, B awaiting us on this 6hr 35min flight to golden sands of DXB.

Straight away the seat felt spacious with plenty legroom, not sure how I'd feel being in the middle 4 seats however, they look confined. (For me being 6ft/ 183cm)

Amenity kits/ blanket and rather plush pillow provided - not worth the photo spam. The amenity kit contained the usual (socks/ toothbrush/ eye shades etc) I left my kit on-board as they tend to just gather in a wardrobe.

One thing we had missed was the pre-departure champagne/ orange juice, as we had stayed in the terminal to avoid the lengthy queues for boarding, not to worry.

Luckily I had pre-booked the 2 seater A,B on both flights months in advance, £40 per person but worth it in the end. Gone are the days of free seat selection prior to the flight, unless of course, you have British Airways Silver/ Gold status.

Once sat in our seats, I had a look around and noticed some wear and tear already, disappointing as this was just a 3 month old bird, small scuffs on the over head panels or on the side panels etc, I guess it is expected with the volume of pax every day. 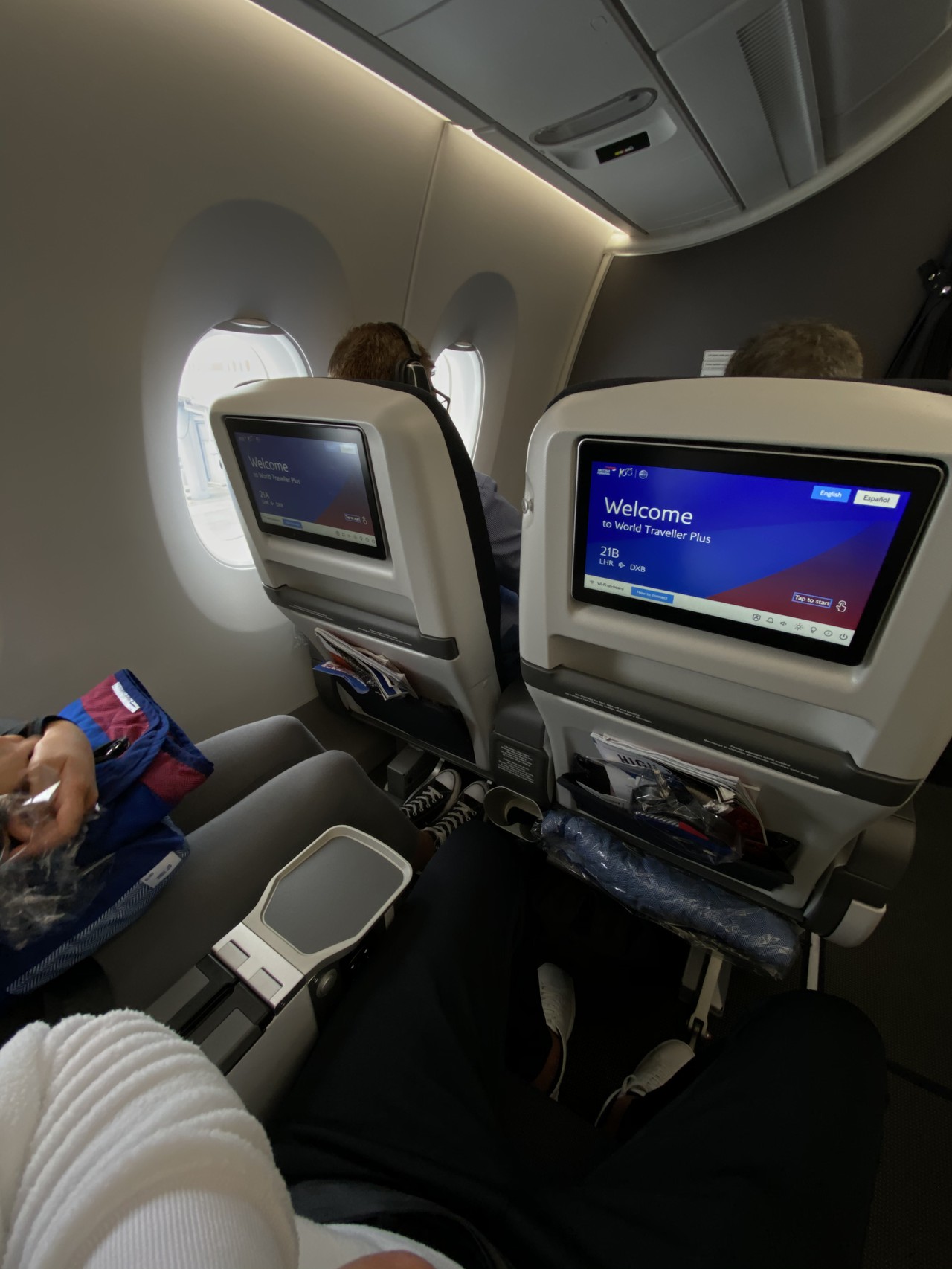 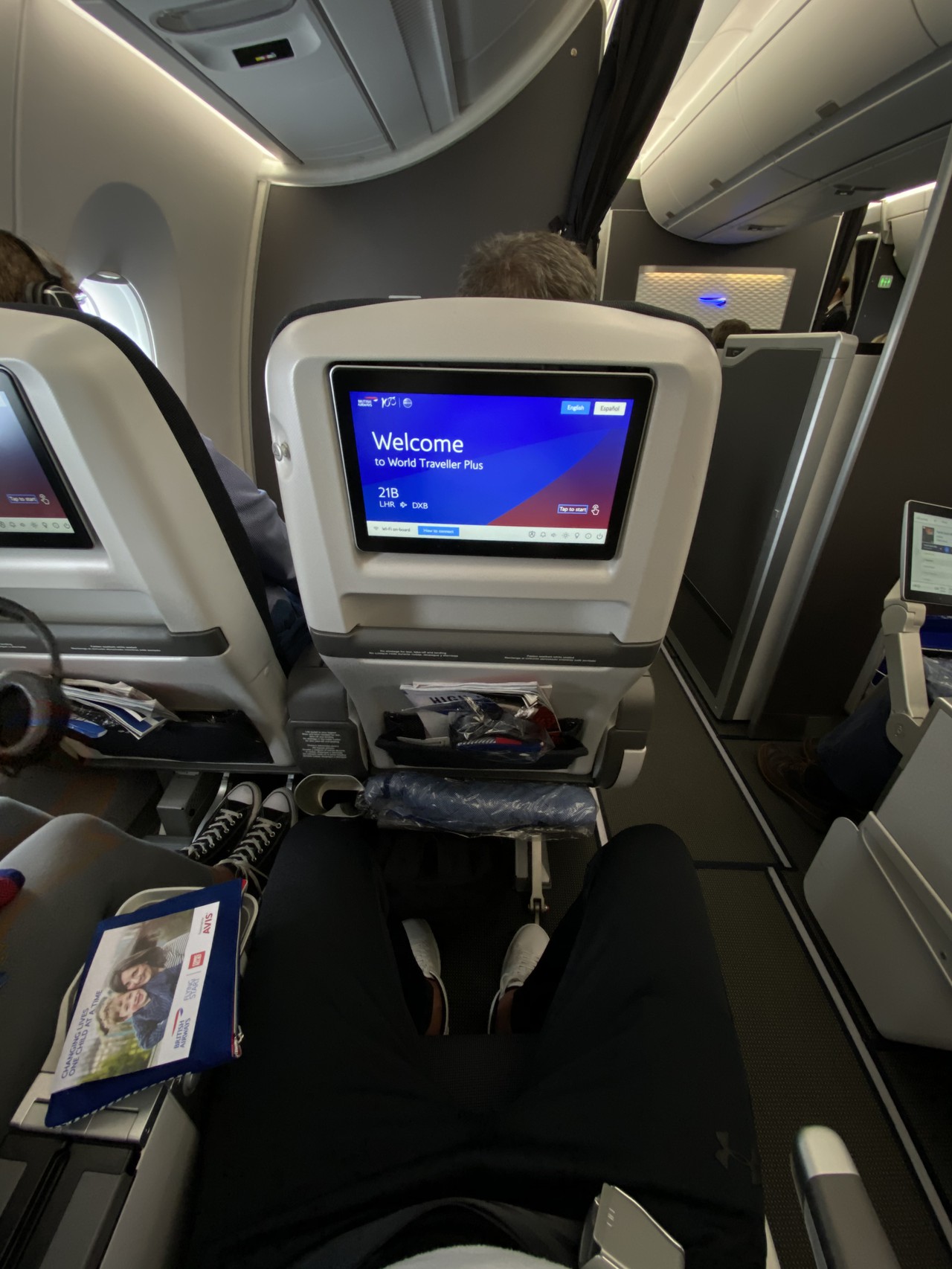 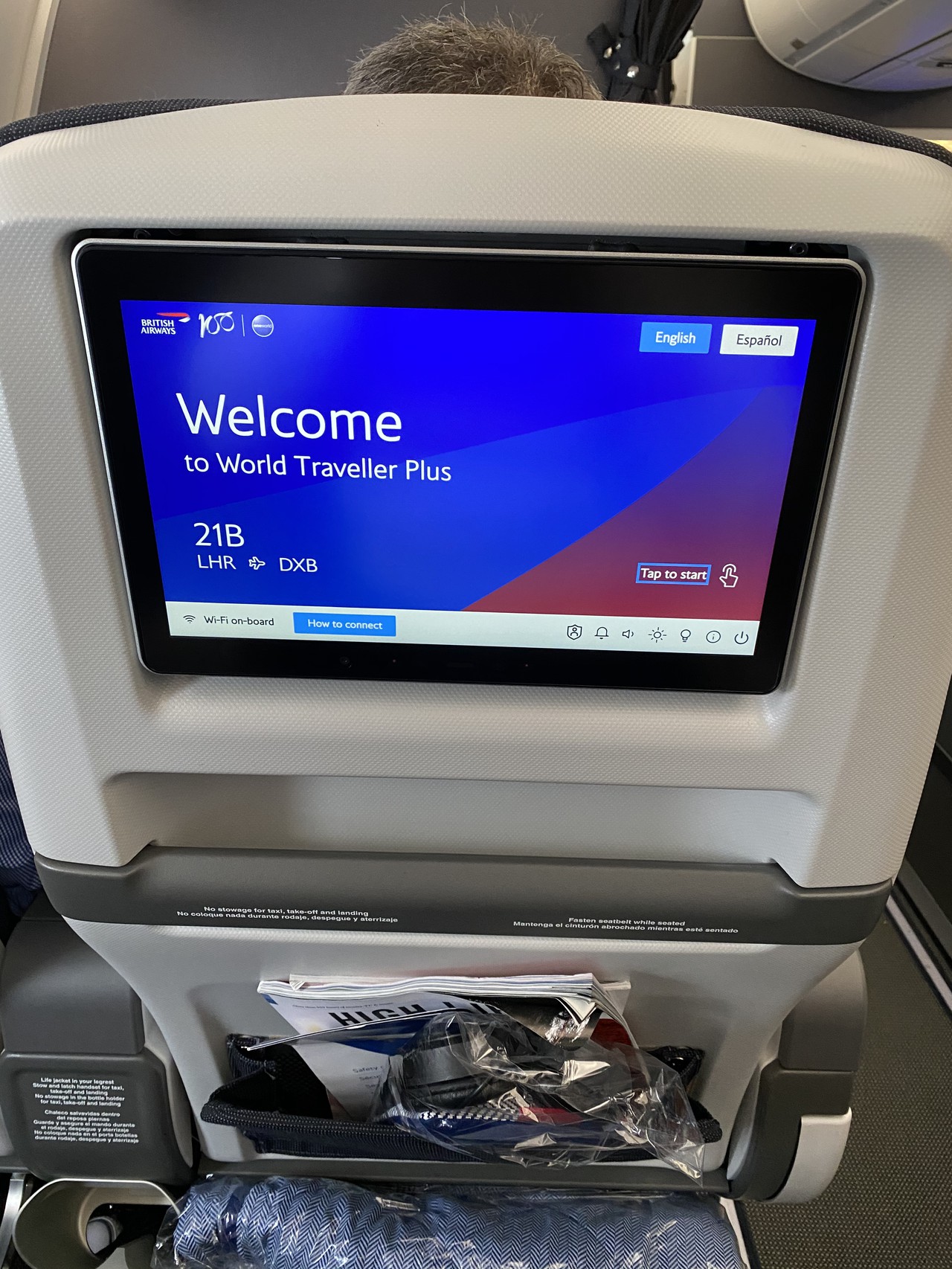 Ready for departure, I'd say the flight was between 90-100% full, very busy with economy pax moving their luggage up to free space in Club World overhead lockers.

A nice modern view out the window of the new wingtips on this A350, also a nice touch to have the tail livery on the sharklets. 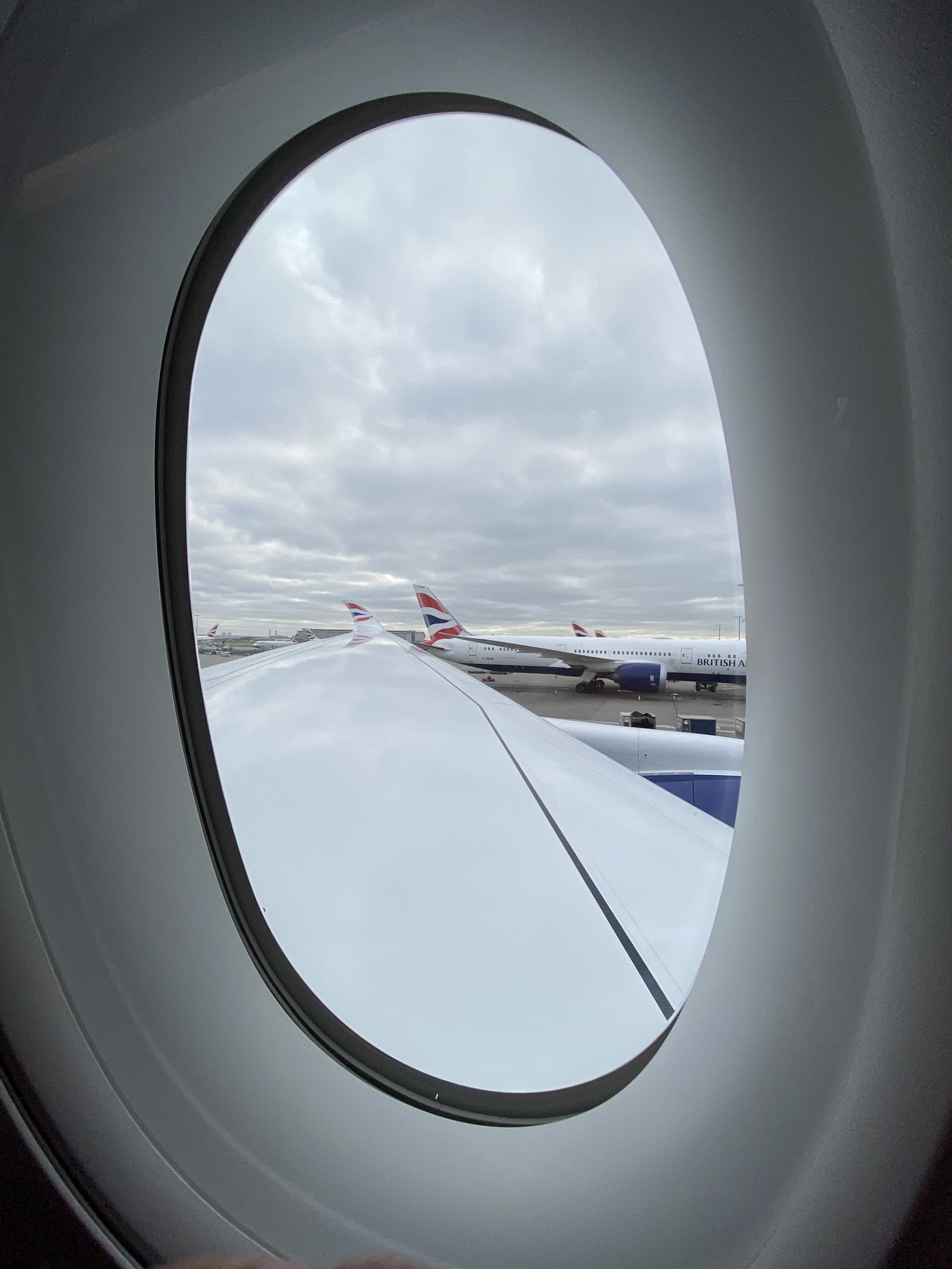 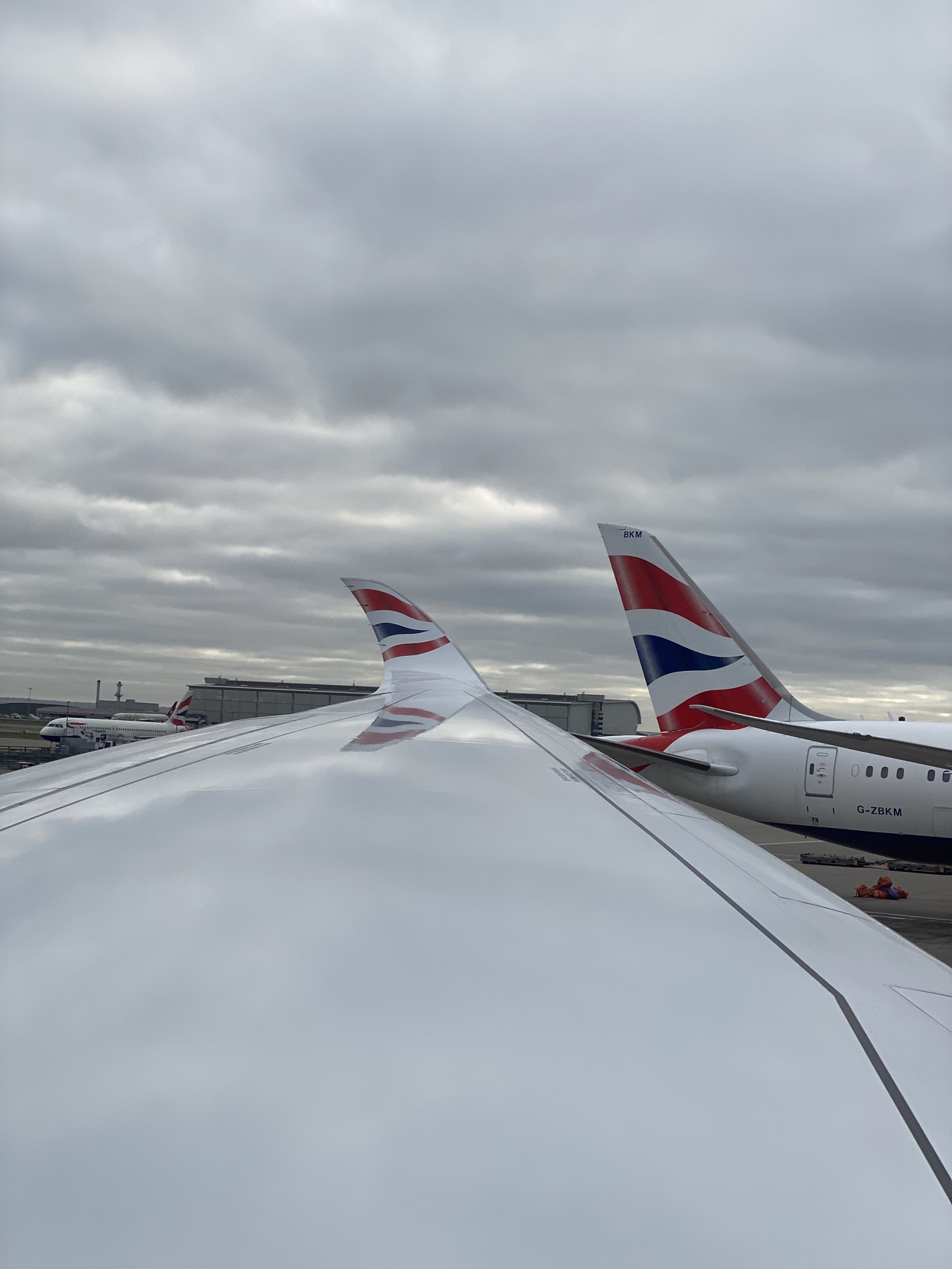 Lined up on 27R, then a very smooth take off for this bird, very swift with minimal effort from the 2 RR Trent XWB engines.

Banking over to the south past LHR and making our ascent to cruising altitude. 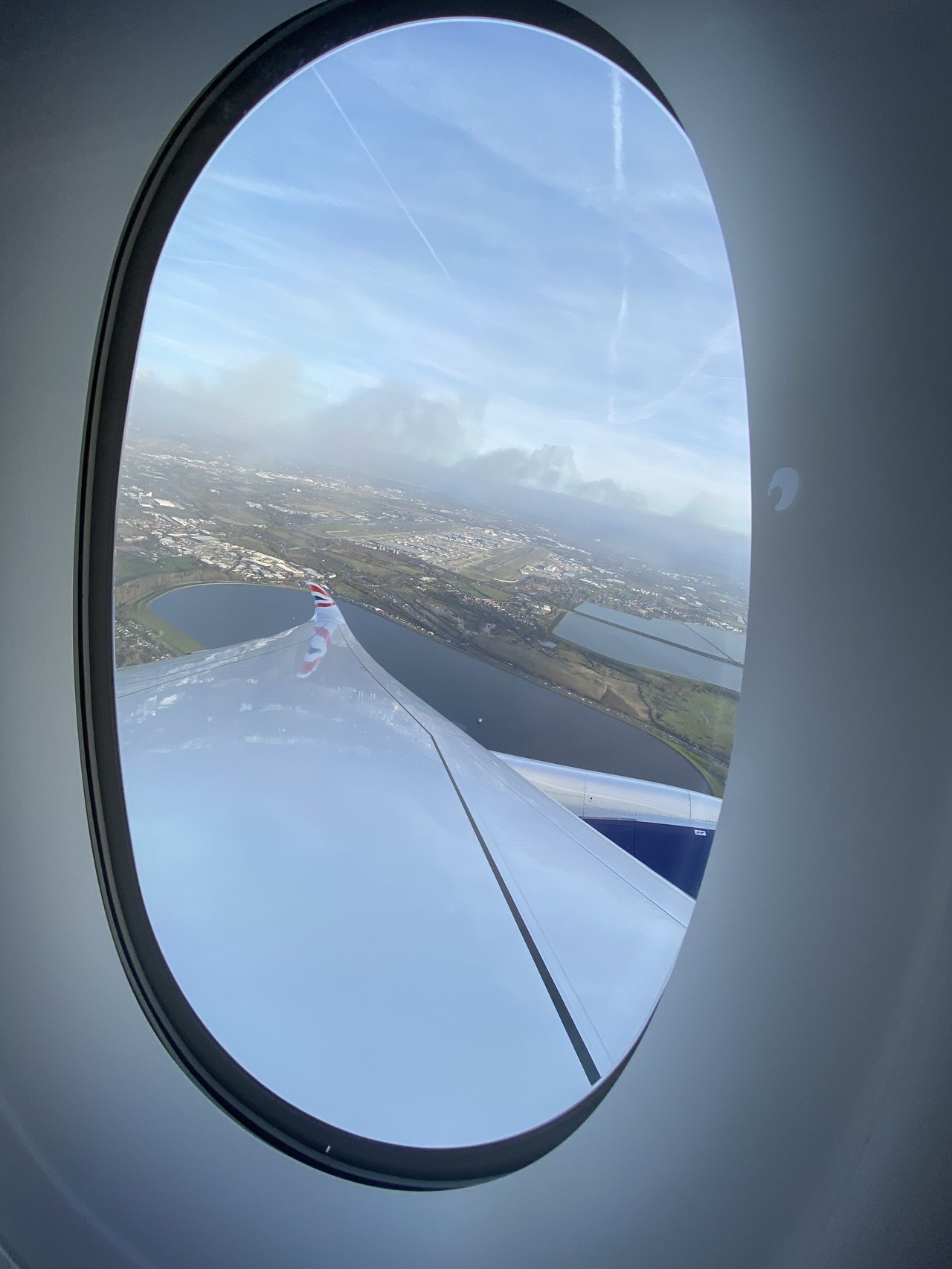 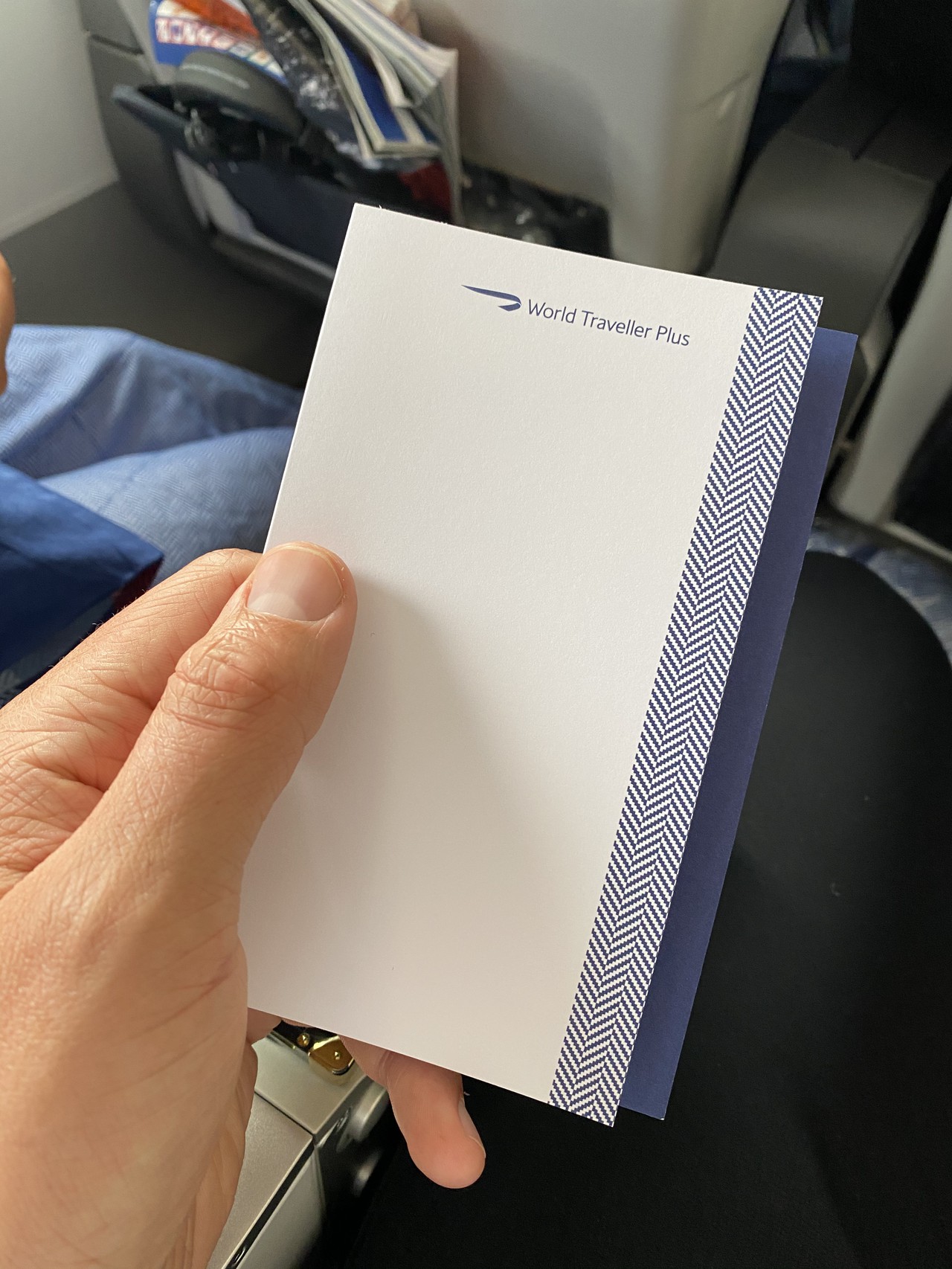 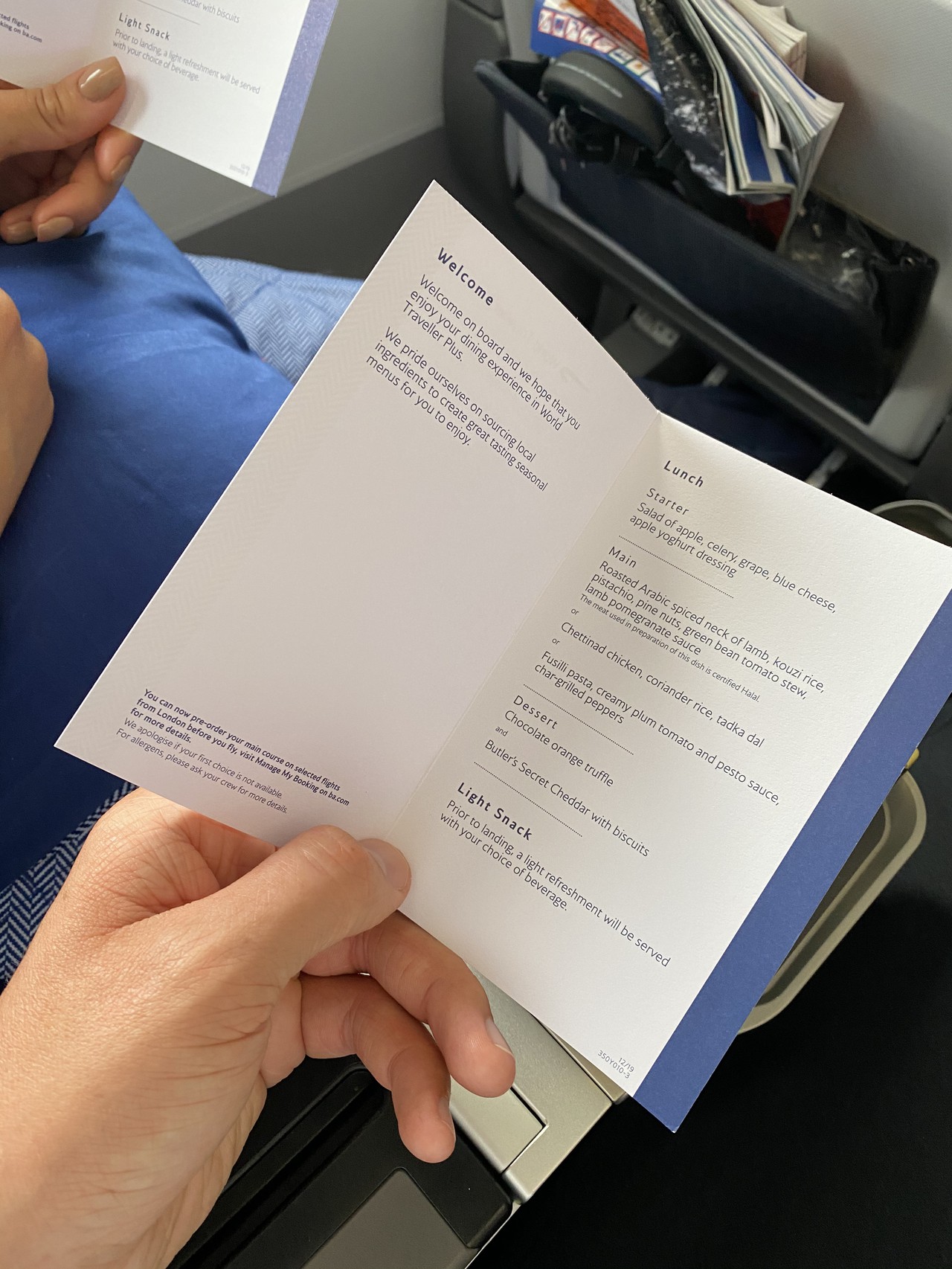 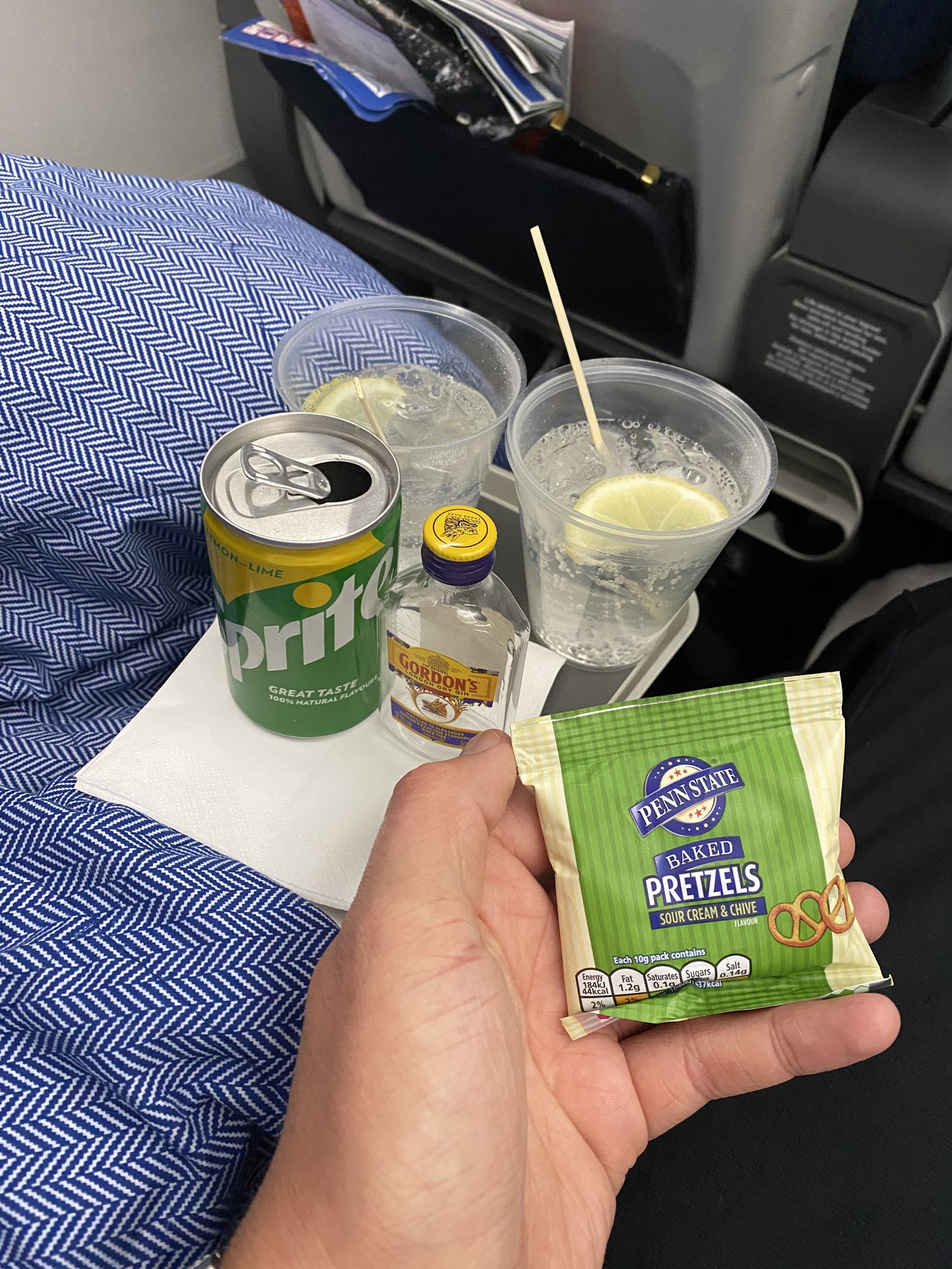 Some photos of the menu and the first drinks service which started around 1hr into the flight, we opted for Gin and Lemonade. These were provided with the usual sour cream and chive pretzels. 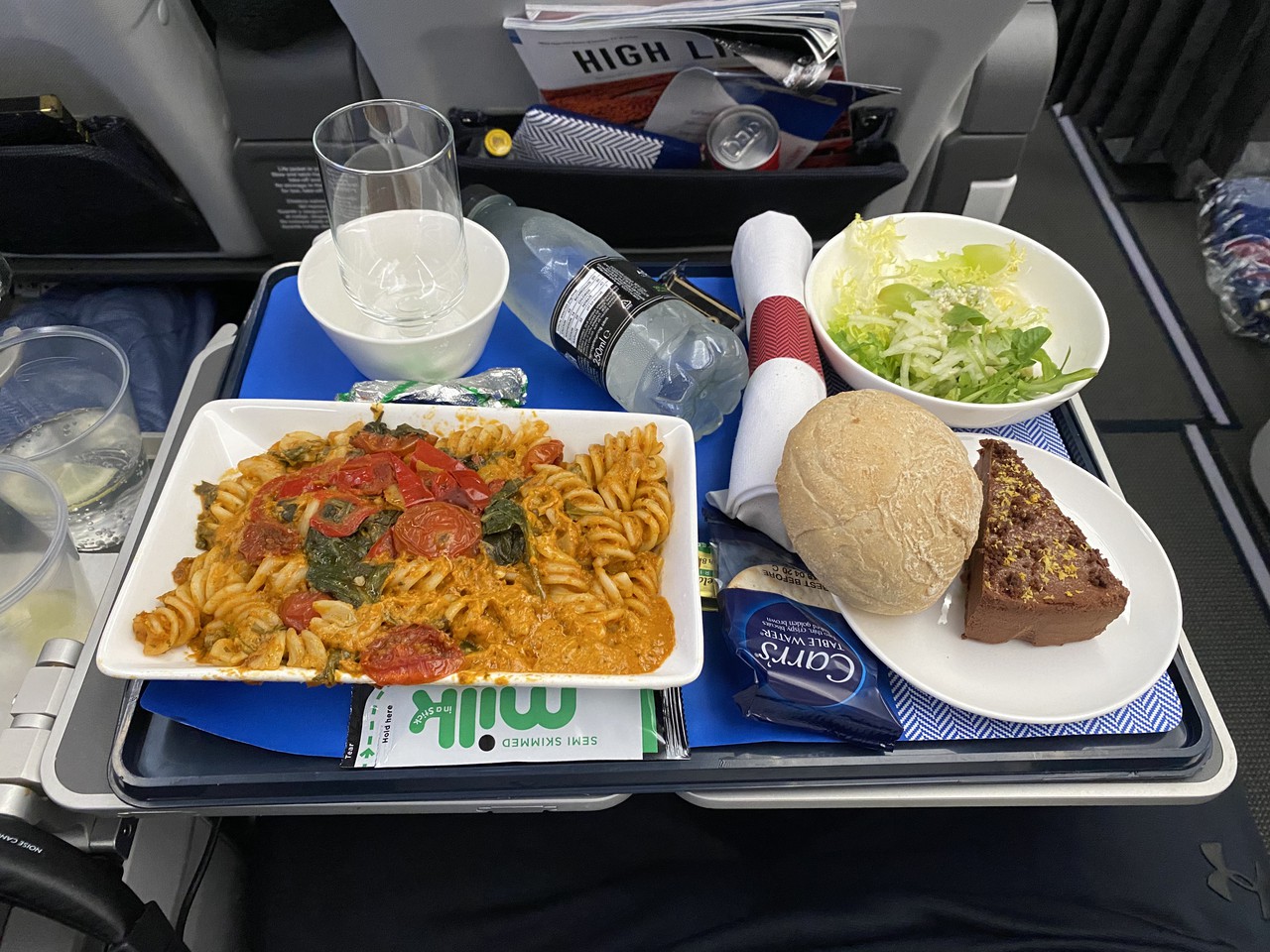 Main meal service - around 2-3hrs into the flight the crew started distributing the meals.

We had pre-booked our meal online a few days before via 'manage my booking' for free.

I went for the Fusilli Pasta and found it to be so much that I could not finish it, a good sign of a proper meal portion. 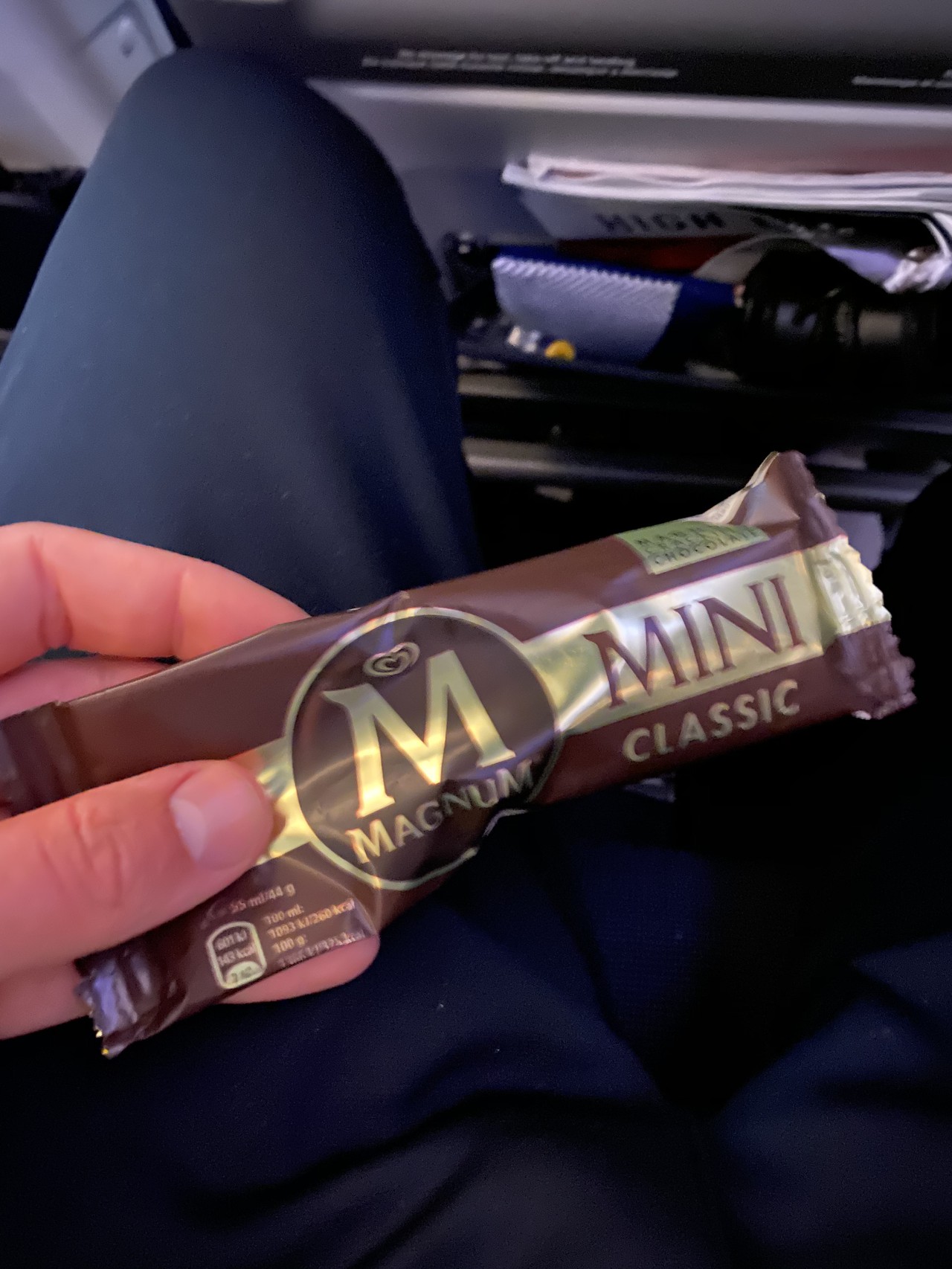 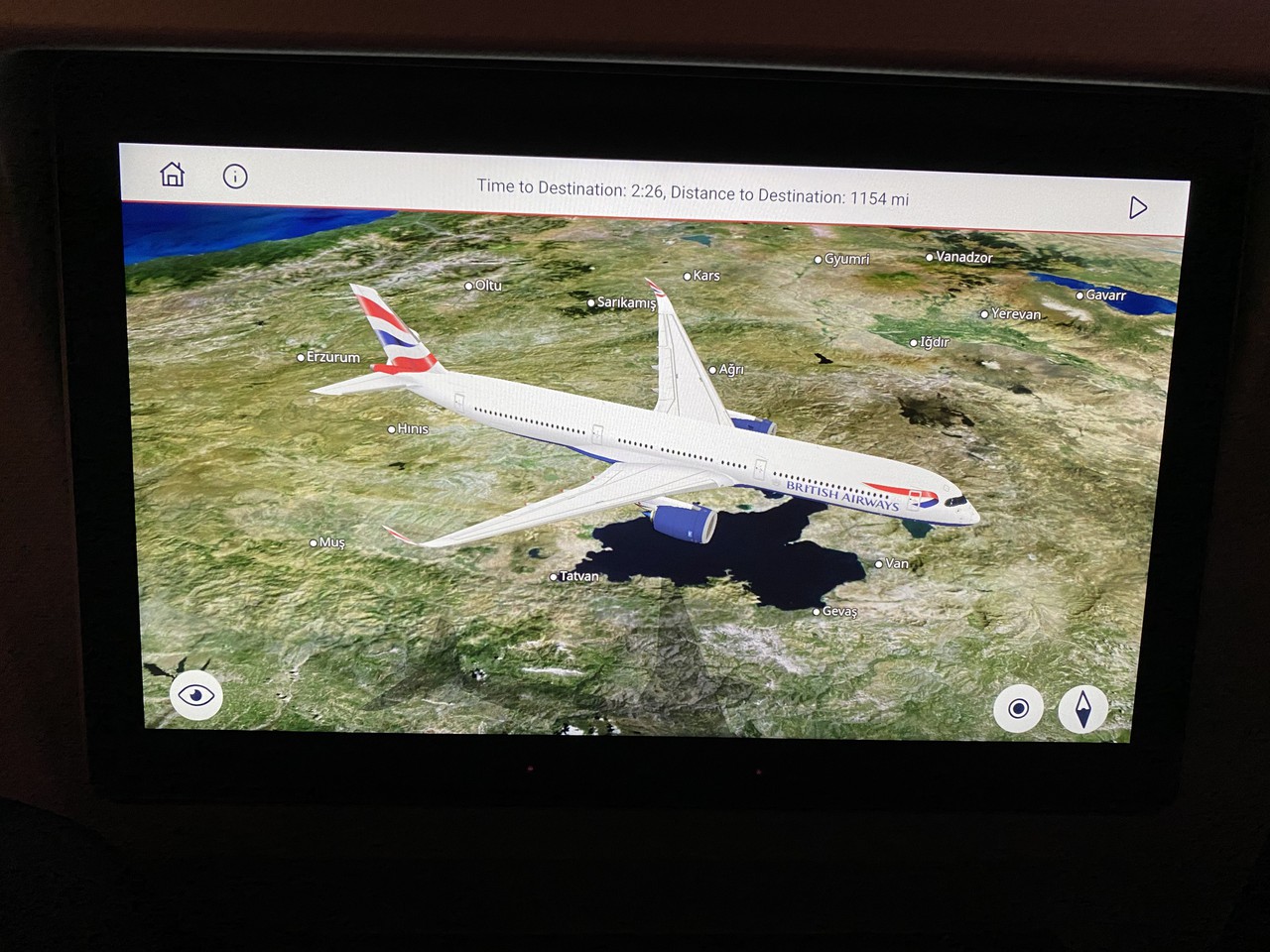 Some nice sunset views and the British Airways 3D Map.

The entertainment system is very responsive and fast, what you would expect for a new aircraft.

Onboard Wi-Fi was available, I chose not to use it but took a screenshot to share with you all. 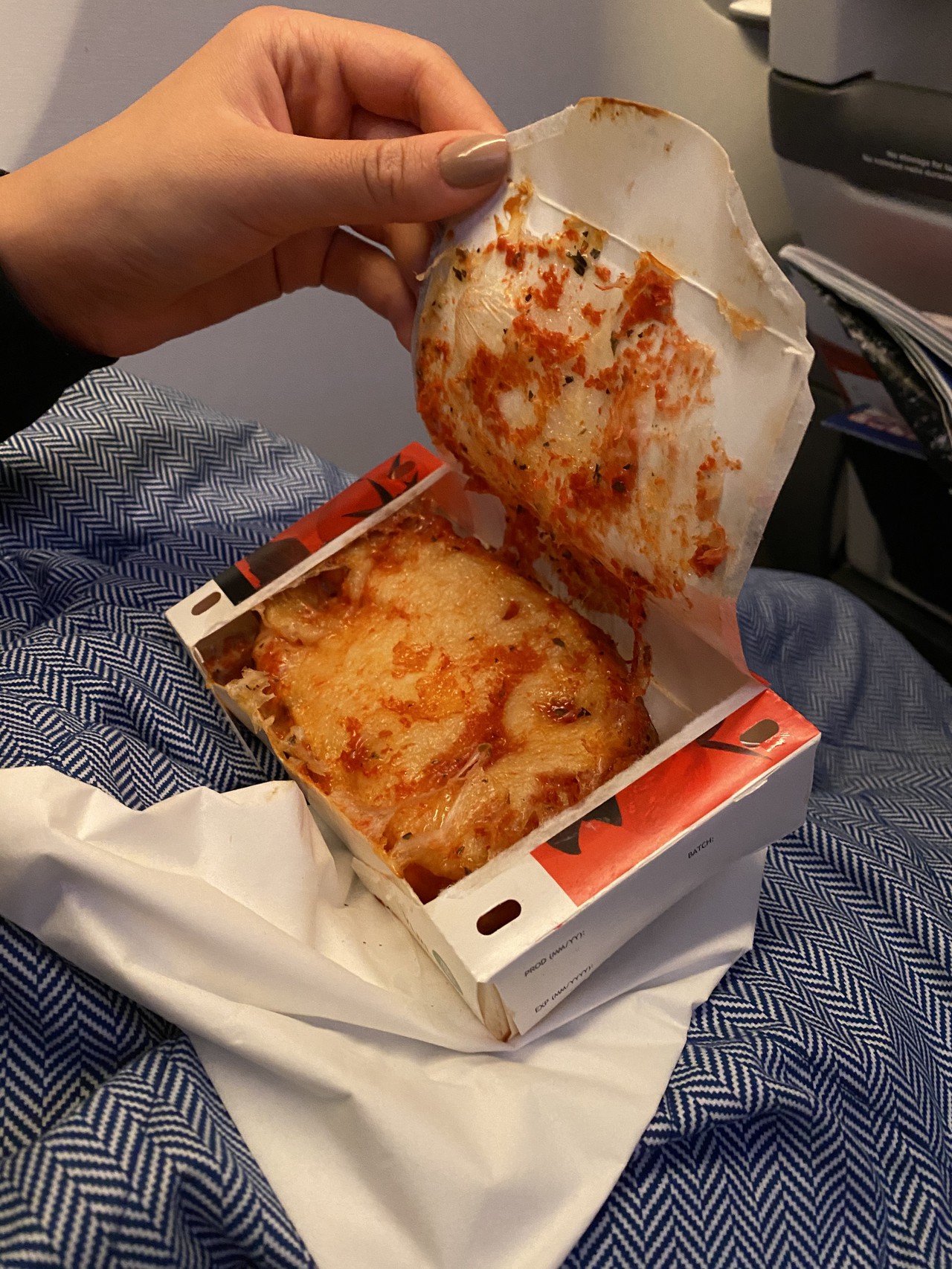 Pre-landing snack - out came this disaster of a pizza.

I'd appreciate if BA was to review this snack, it had no cheese and was mostly a giant piece of hard dough, surely there could be better for WT+ considering the main meal was appetizing..

The remainder of the flight was uneventful, one nit pick for me personally is the lack of mood lighting.

I am used to it travelling the likes of EK these days, but for a 3 month old bird to be set the majority of the flight with white light was strange.

It takes away the warmth of the oozing purple or orange sunset vibes.

The mood lighting did come on around an hour before landing but i'd of thought they could have it set for the whole flight.

I did not take any photos of the arrival as it was around midnight and pitch black, however it was an uneventful landing.

I think there is some quirkiness missing if you were to compare it to Virgin Atlantic's on board service, but its a good hard product.

Many thanks for reading this report, I look forward to posting more in the future!

The contributors of Flight-Report published 10 reviews of 3 airlines on the route London (LHR) → Dubai (DXB).

The average flight time is 6 hours and 46 minutes.