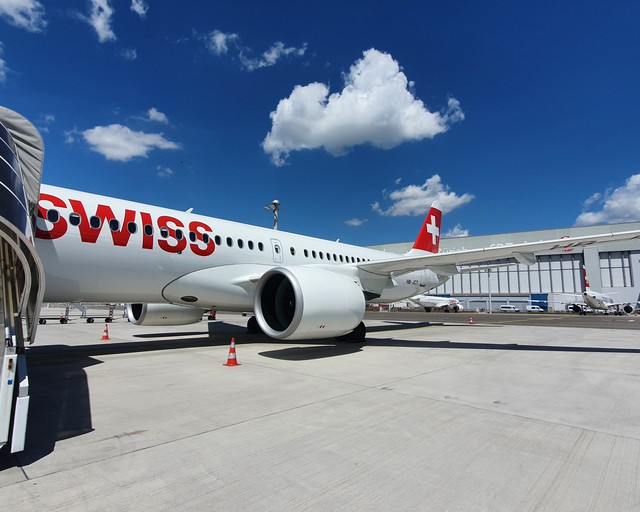 #15 out of 74 Airlines A minimum of 10 flight-reports within the past two years is required to appear in the rankings. 861 reviews

While I'm usually off on weekends, I had to travel to Zurich for a dinner meeting (not the worst to be honest) with one of our clients and decided to book a flight with Lufthansa as they offered good rates on such short notice. It also meant that I'm finally getting to experience a flight on an Airbus A220-300 and a Mitsubishi Canadair CRJ900 of Swiss and Lufthansa Cityline as I took some detour on the way back to Amsterdam the next day.

See the itinerary I booked below.

After being dropped in the terminal after a disappointing flight, I had about two hours to kill for my onwards journey to Zurich and my first ever flight on an Airbus A220-300. Frankfurt's terminal was significantly quieter compared to Amsterdam with many shops still being closed at the moment. 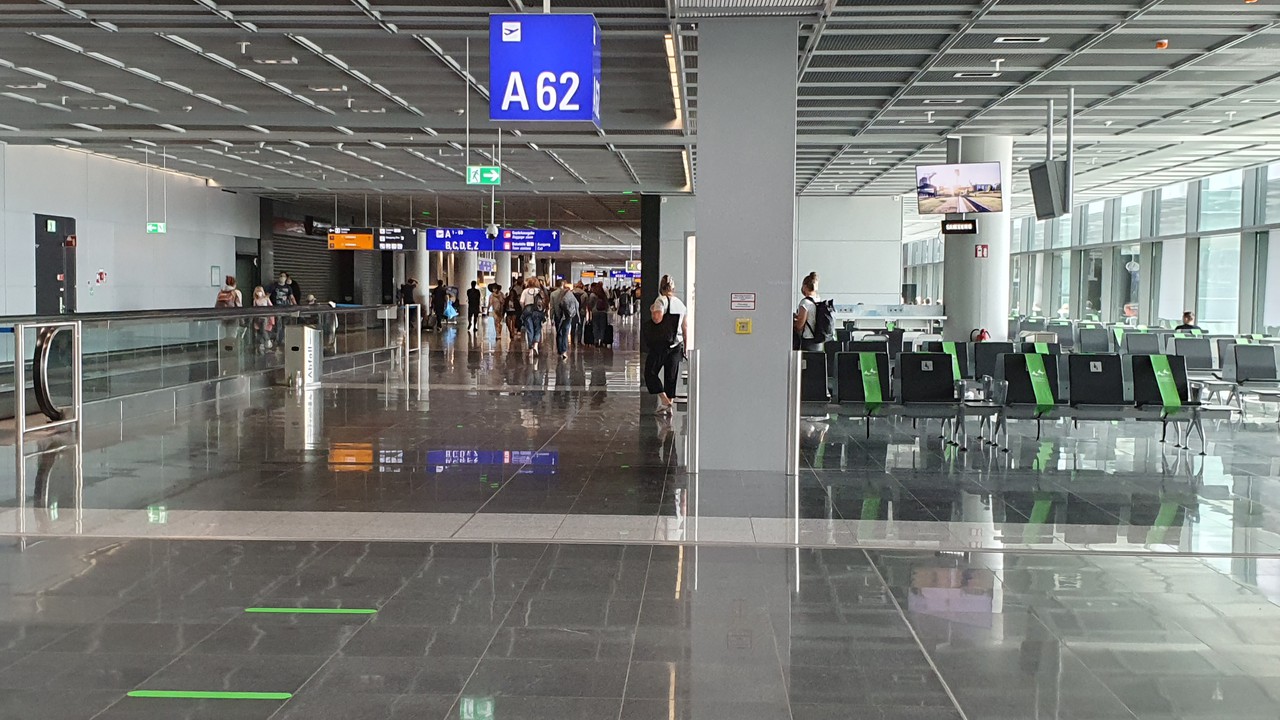 As my previous flight dropped me off at gate A66, it meant that I would need to walk to the other side of the terminal and would take me about 15 minutes to reach. It definitely is quite a run if you have a tight connection, but I slowly moved my way up to there while trying to spot a few aircraft, but movement was minimal and consisted mostly of Lufthansa A320s and a few United 787s. 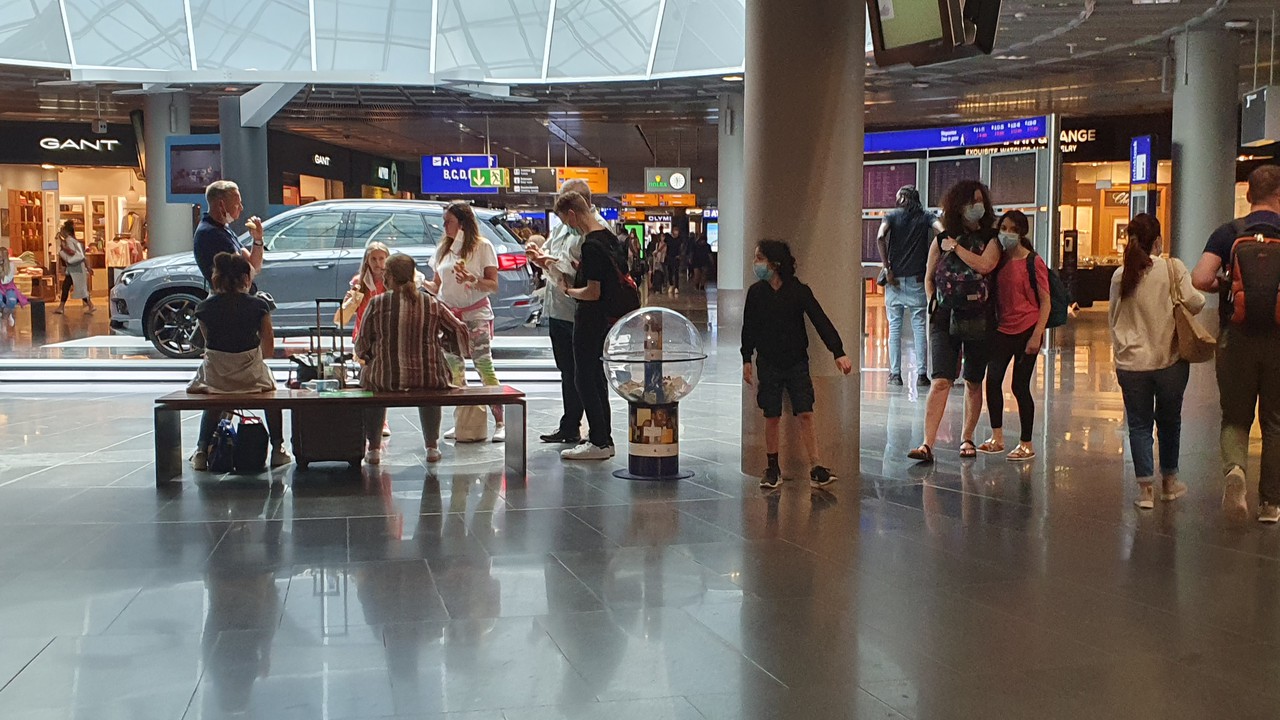 Bought myself some lunch as I didn't really have a proper breakfast either and sat down with a view of this beautiful Airbus A330-300 of Lufthansa. At certain spots in Frankfurt, you really come close to these aircraft. This specific Airbus A330-300 (D-AIKE) was prepping for it's flight to Boston as LH 422 and was named after the German city of Landshut (a nice little cozy town in the vicinity of Munich). 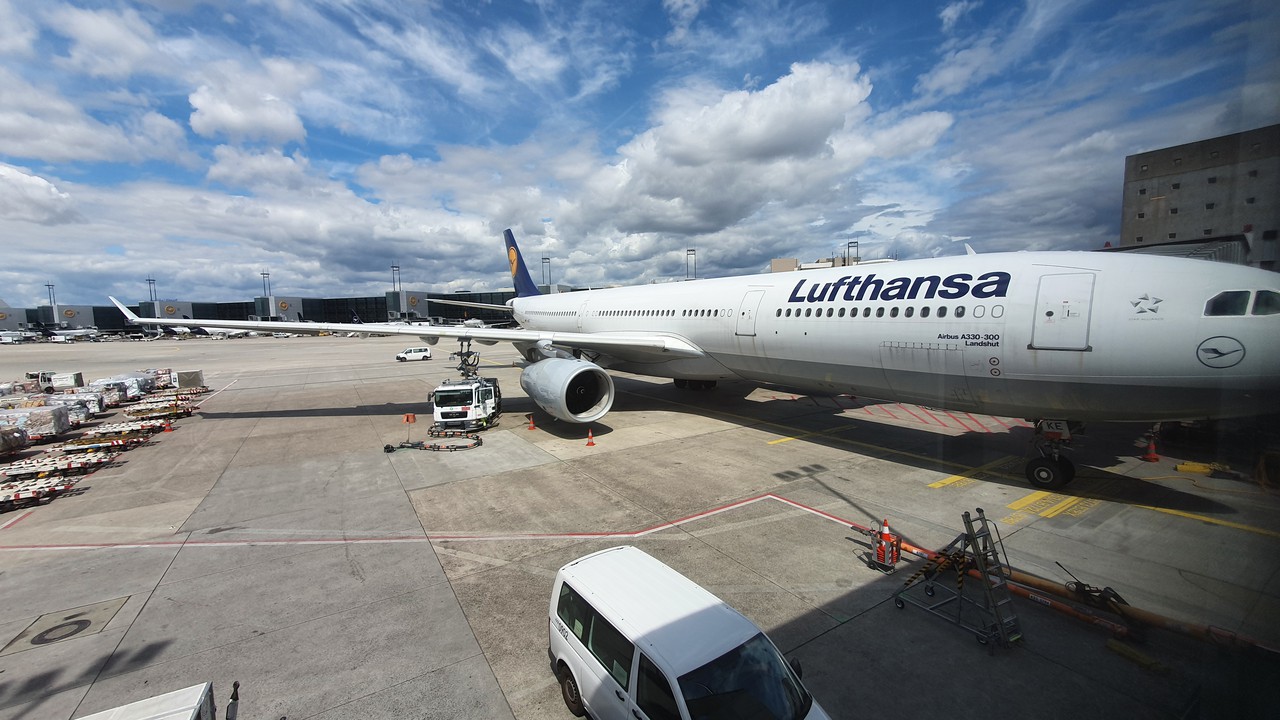 About thirty minutes before departure, I arrived at my gate and the aircraft for today's flight was already parked and fully prepared as it arrived early in the morning. A -100 version was initially scheduled first, but Swiss changed equipment a day before departure to a -300. The flight would be operated by HB-JCT, which is an 0.6 year old Airbus A220-300 and is in fact the newest Airbus A220 in Swiss's their fleet. It can carry up to 145 passengers in a two cabin configuration and is powered by two Pratt & Whitney PW1524G-3s. 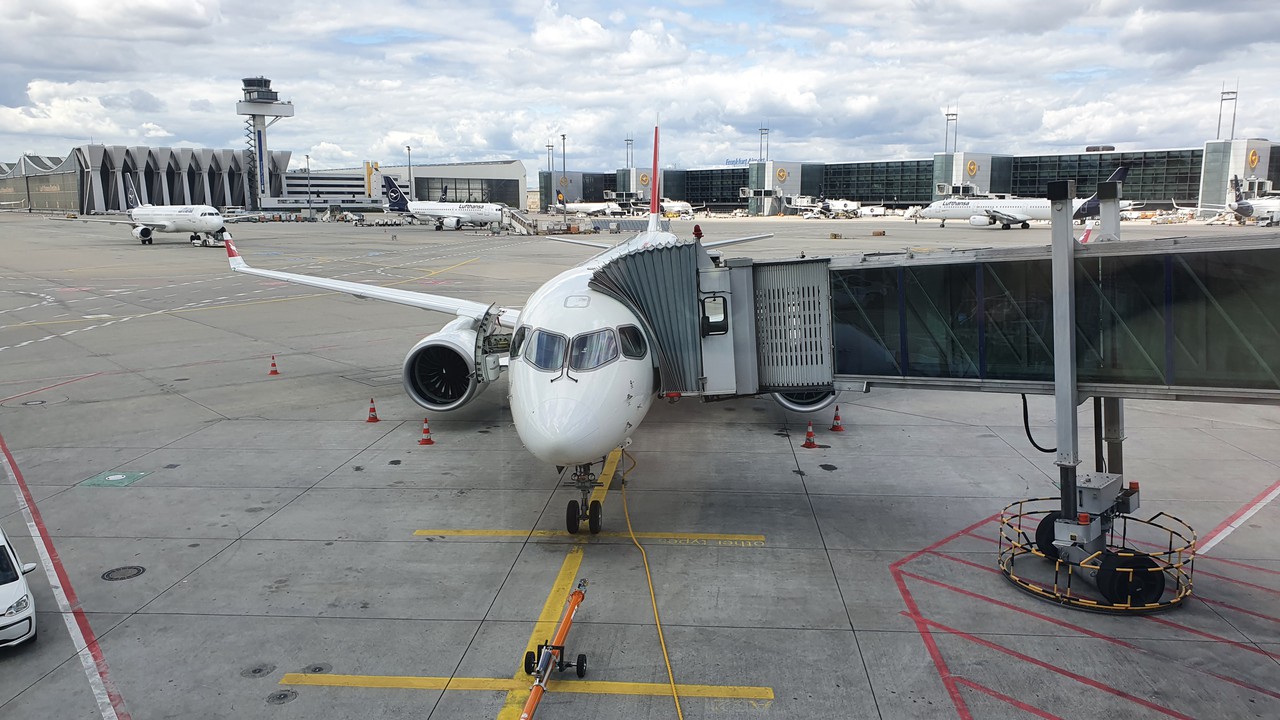 Boarding was called on time and didn't go as planned by ground staff. Disabled, families with children and travellers with status or Y tickets were the first to board. The second announcement was made shortly after saying that everyone seated on the left seats were allowed to board. A choice I couldn't understand as I'm pretty sure that many travellers don't even know whether seats A or F are on the left or right side of the aircraft and a large sum of them probably is unable to differentiate right from left. Eventually the ground attendants opened it up for everyone as they were overpowered by the shear number of people flocking to the gates.

Eventually found my seat and settled down with a generous legroom, though I'm not a massive fan of those two small seatpockets, which can barely hold a phone. 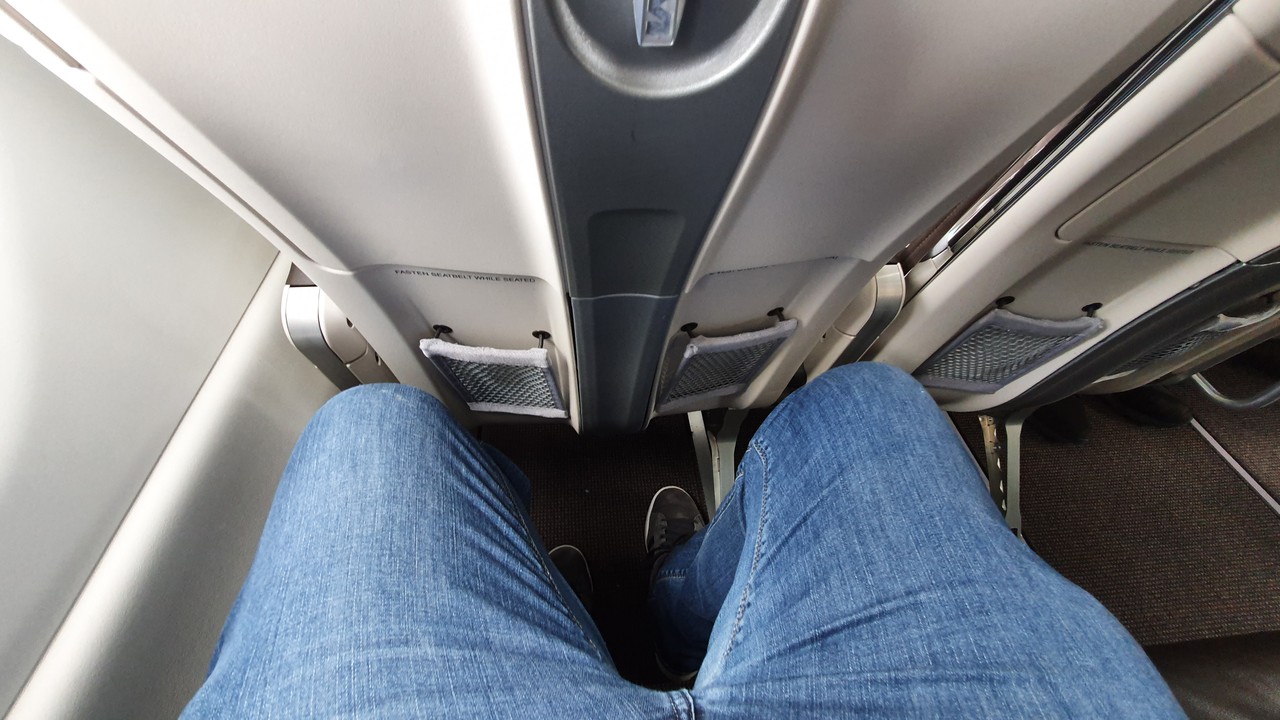 A United Boeing 787-10 parked next to us in their new livery. The new livery definitely looks better on a 787 if you compare it to their 737. The window view from Seat 20A is not too shabby too. 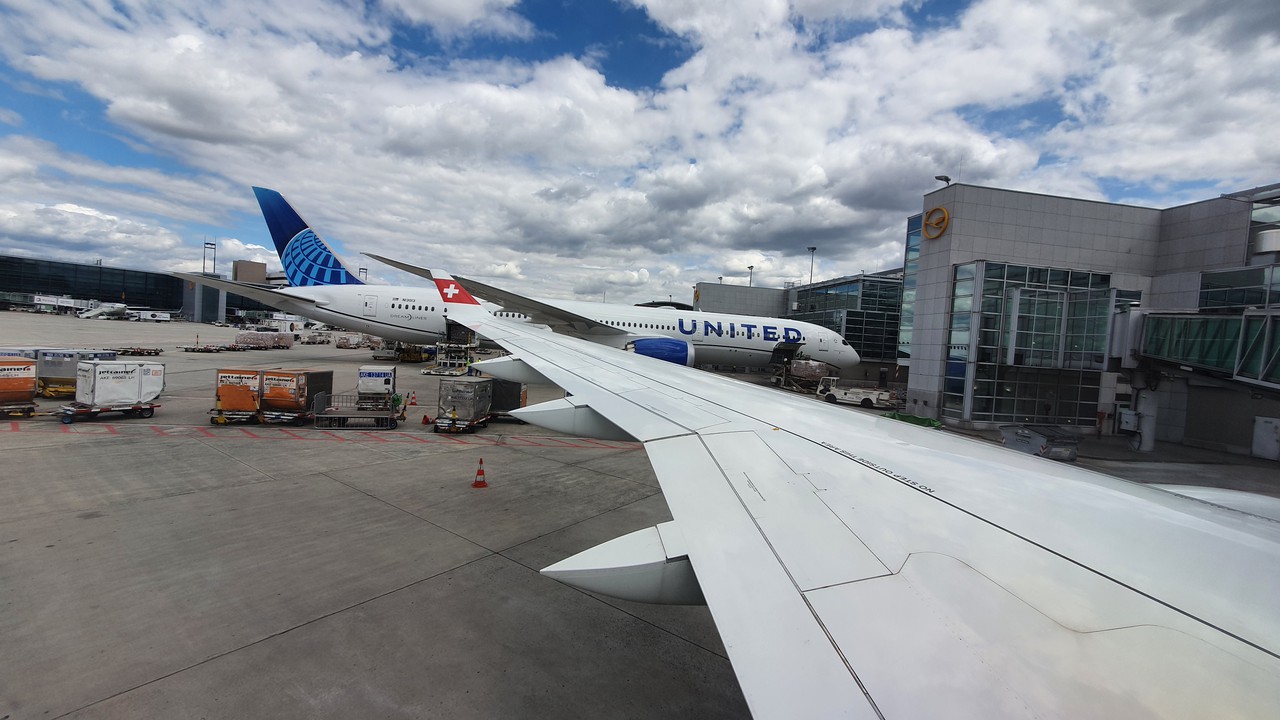 A better look at a row of seats before they were taken by the passengers. The cabin does indeed look pretty neat and so far I'm liking what I see. 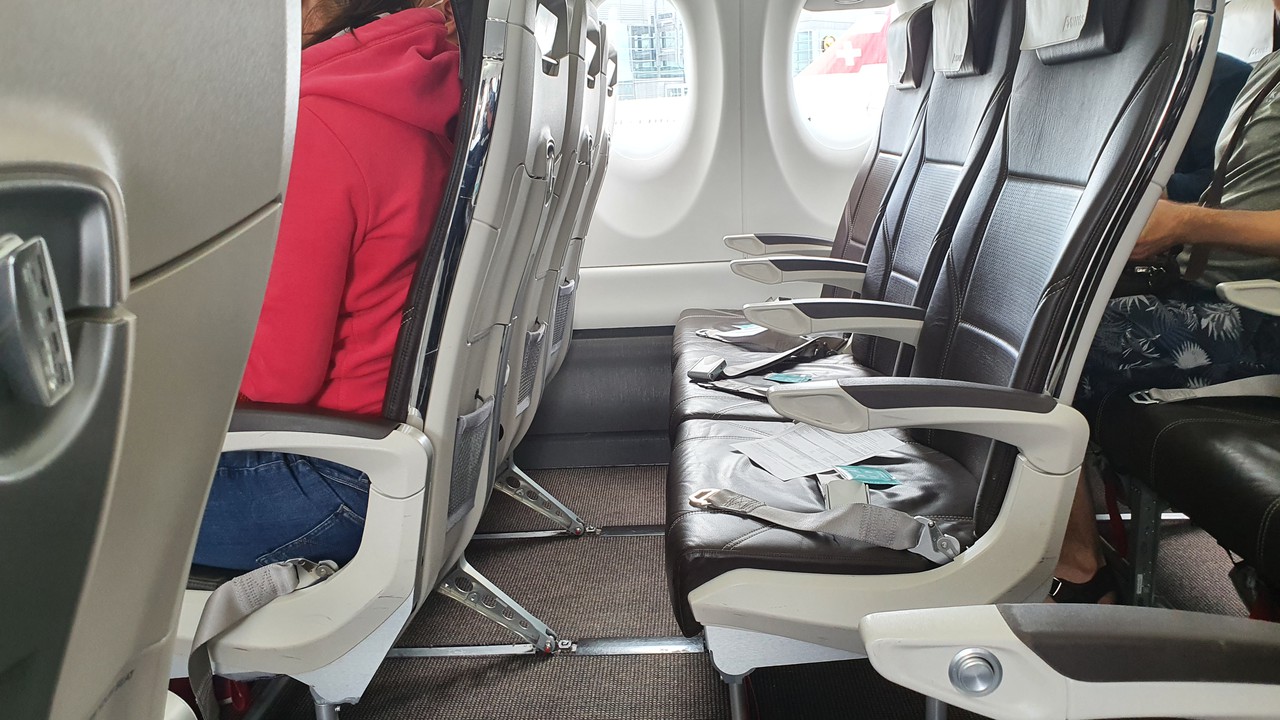 A disinfection tissue with a high percentage of alcohol and a Swiss contact tracing card could be found at your seat while boarding and pens (with Swiss branding) were distributed when boarding was completed by the friendly flight attendants. 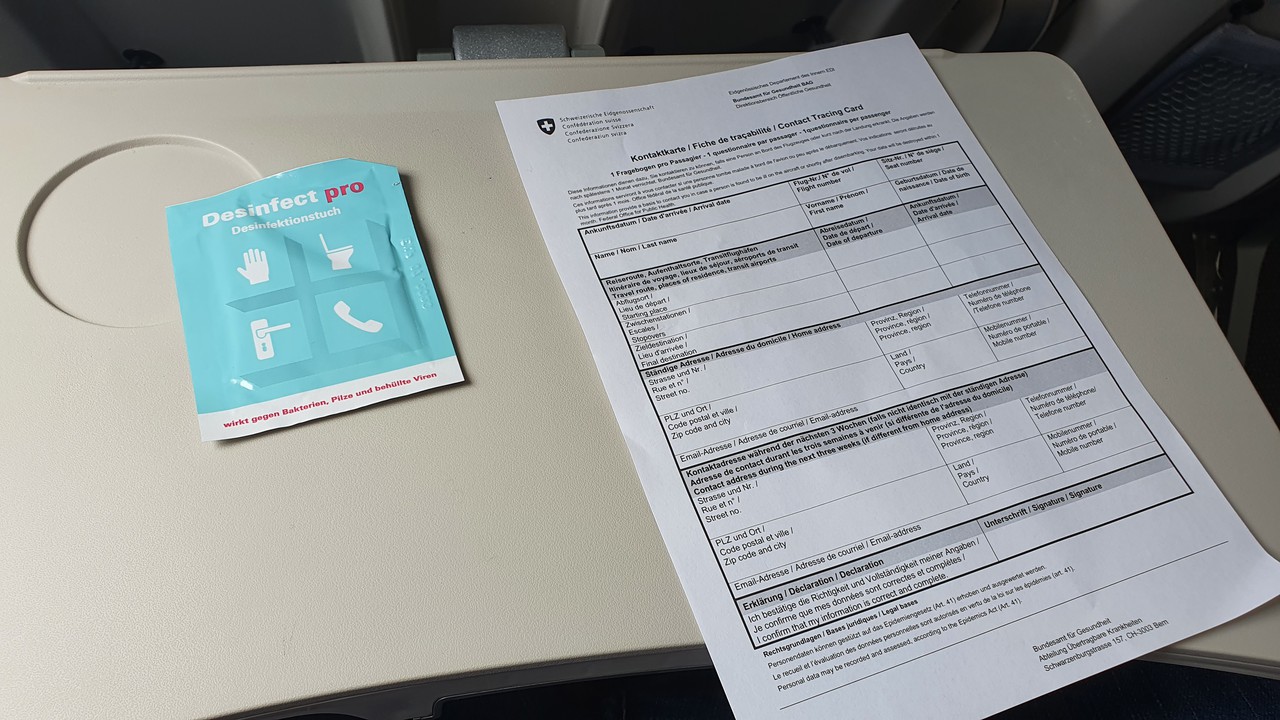 A picture of the cabin and you can clearly see that face masks were mandatory to be worn throughout the entire flight. 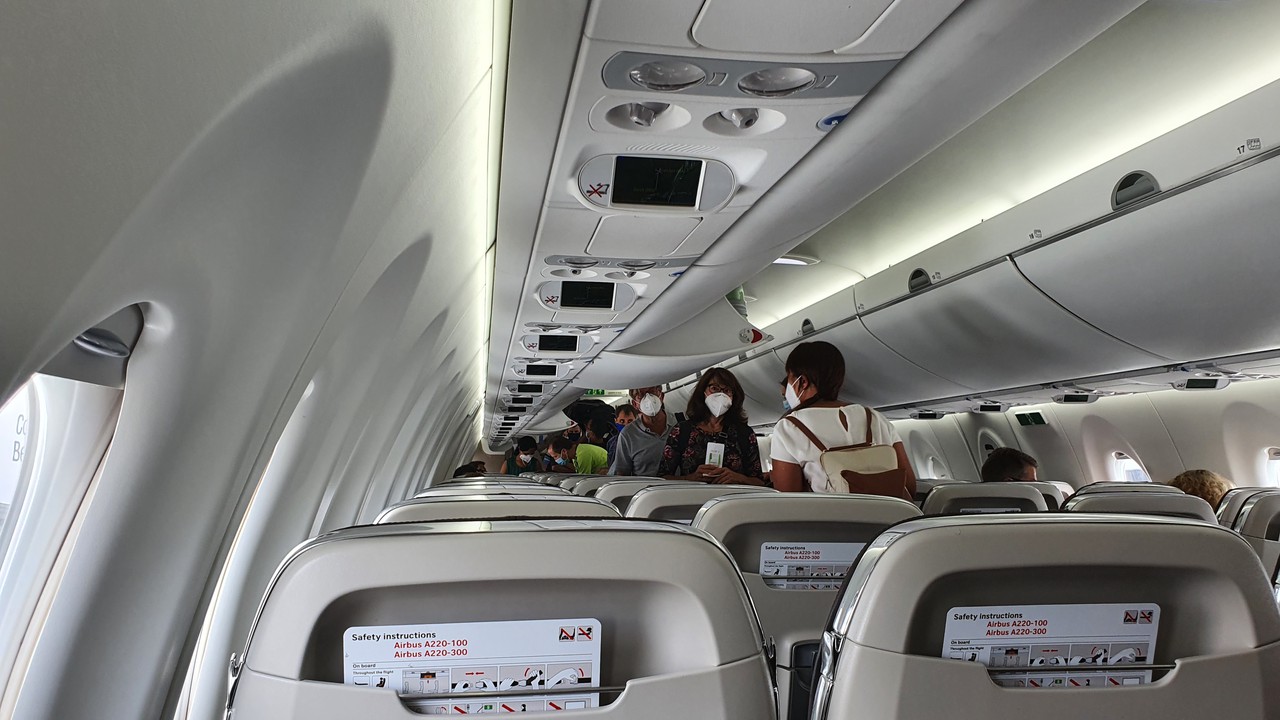 Push back was slightly past our departure time and the safety demonstration was shown on video on the small screens fitted in the overhead panel, which at certain times could be hard to see due to the lighting. Though I absolutely love the addition of it and being able to see the route map throughout our flight. Swiss luckily opted also for individual air vents, which is a good thing. 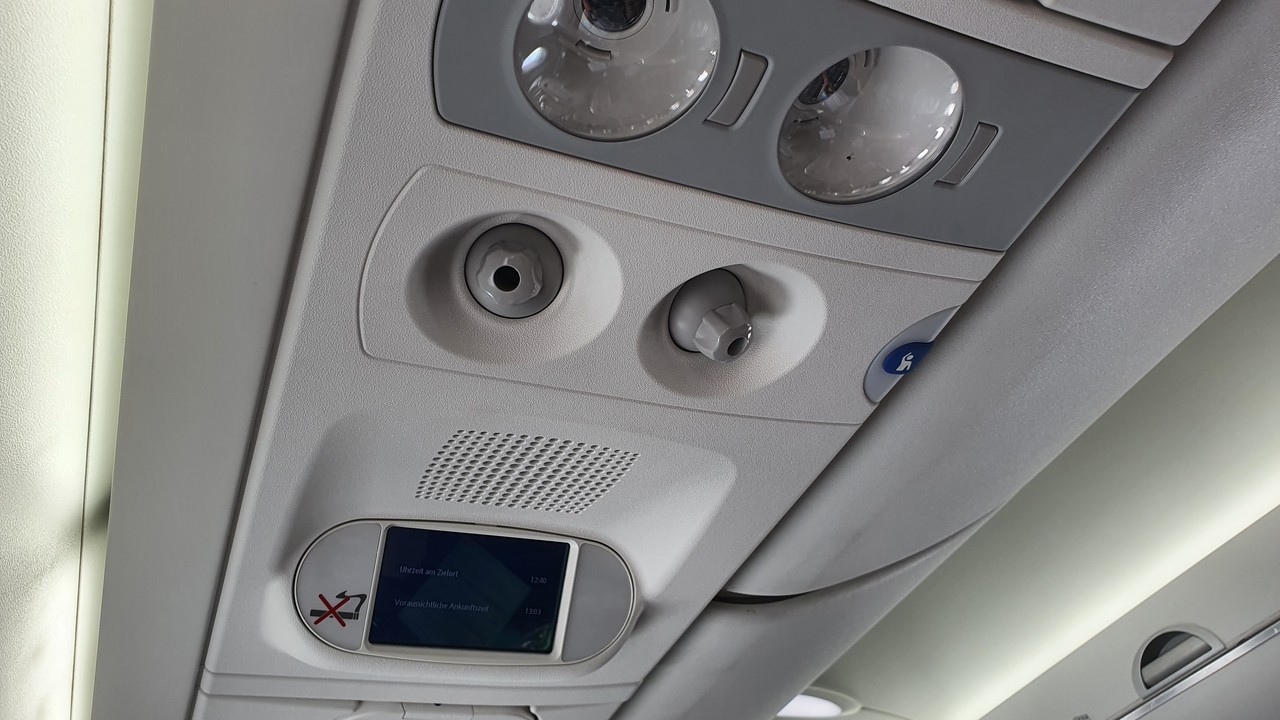 Departure was done from Runway 25C with a minimal delay of approximately 13 minutes and an early left turn towards Zurich, which gave us a good overview of Frankfurt's Airport as we were flying parallel to Runway 18. 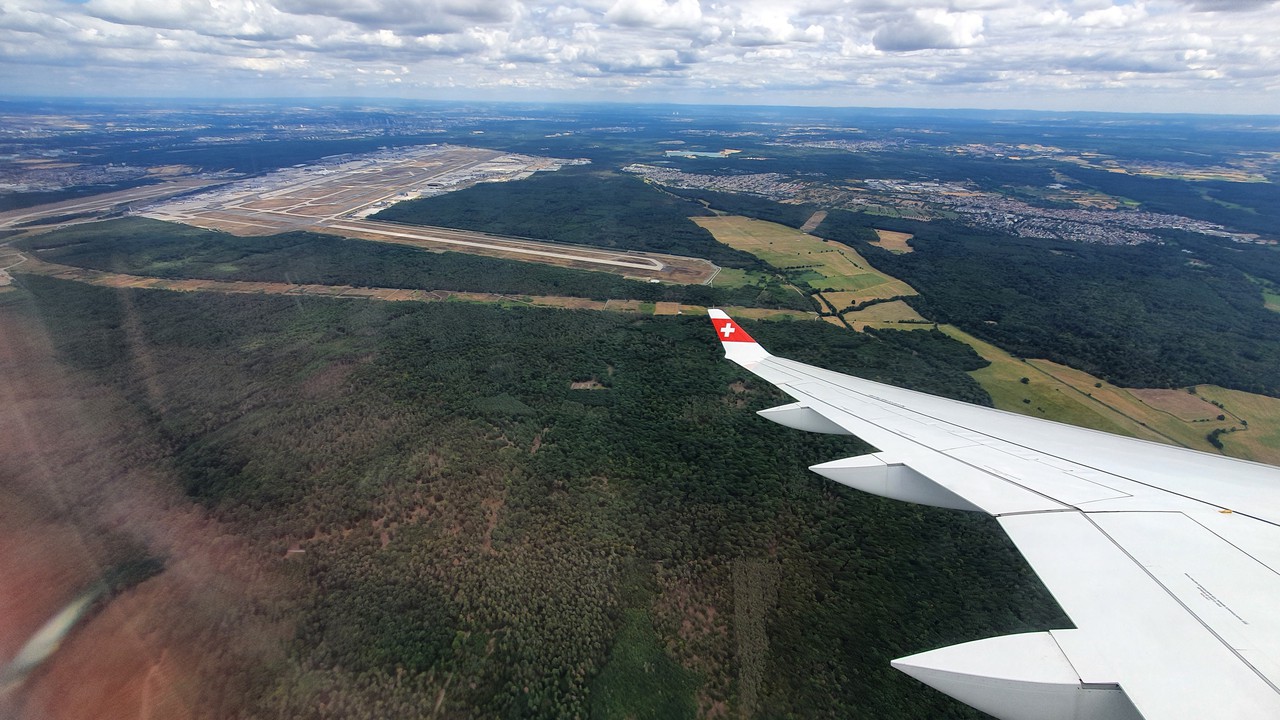 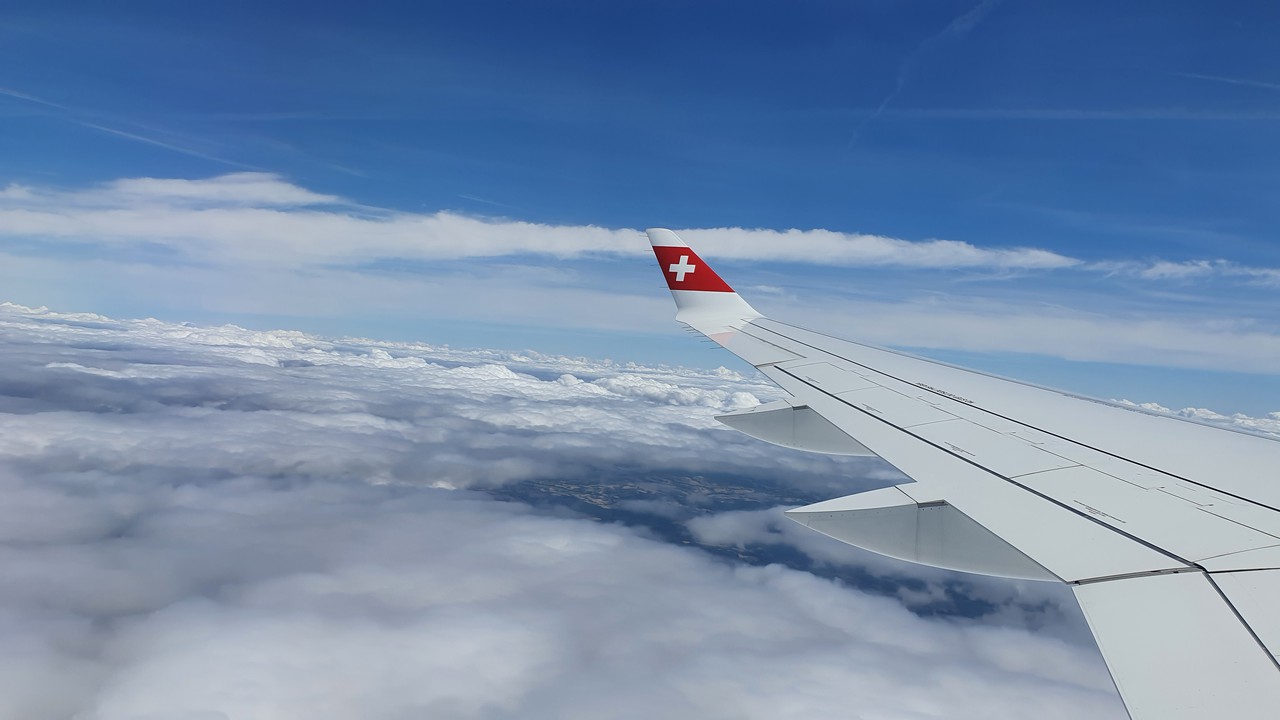 Once we were at a safe altitude, the flight attendants jumped into action for this short hop to Zurich to provide us with service, which was also minimized due to Covid-19, however they did provide us with more options than a mere bottle of water like Lufthansa did. Coffee/Tea, juice or water was served with a Swiss chocolate. The cabin attendants were very attentive and offering some extra water to passengers if they decided for some coffee or tea. I eventually took a coffee myself, but thanked for the water.

The coffee however was freshly brewed and tasted surprisingly good for aircraft coffee. 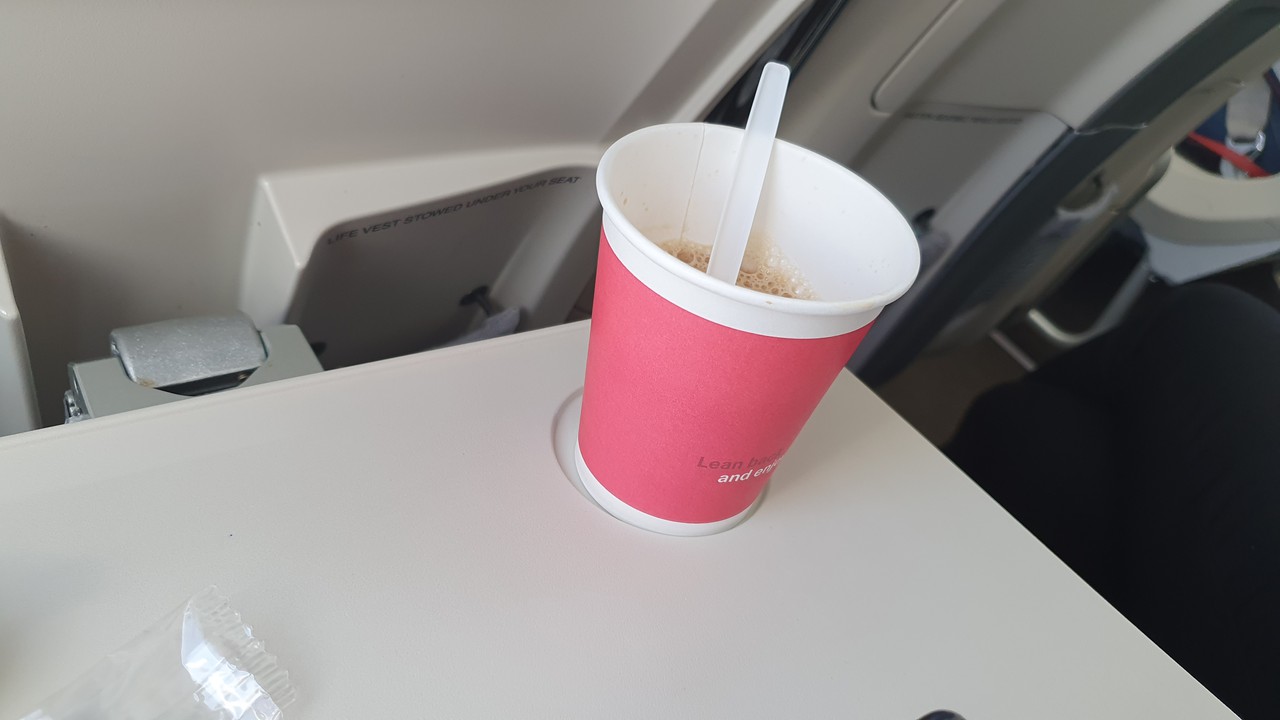 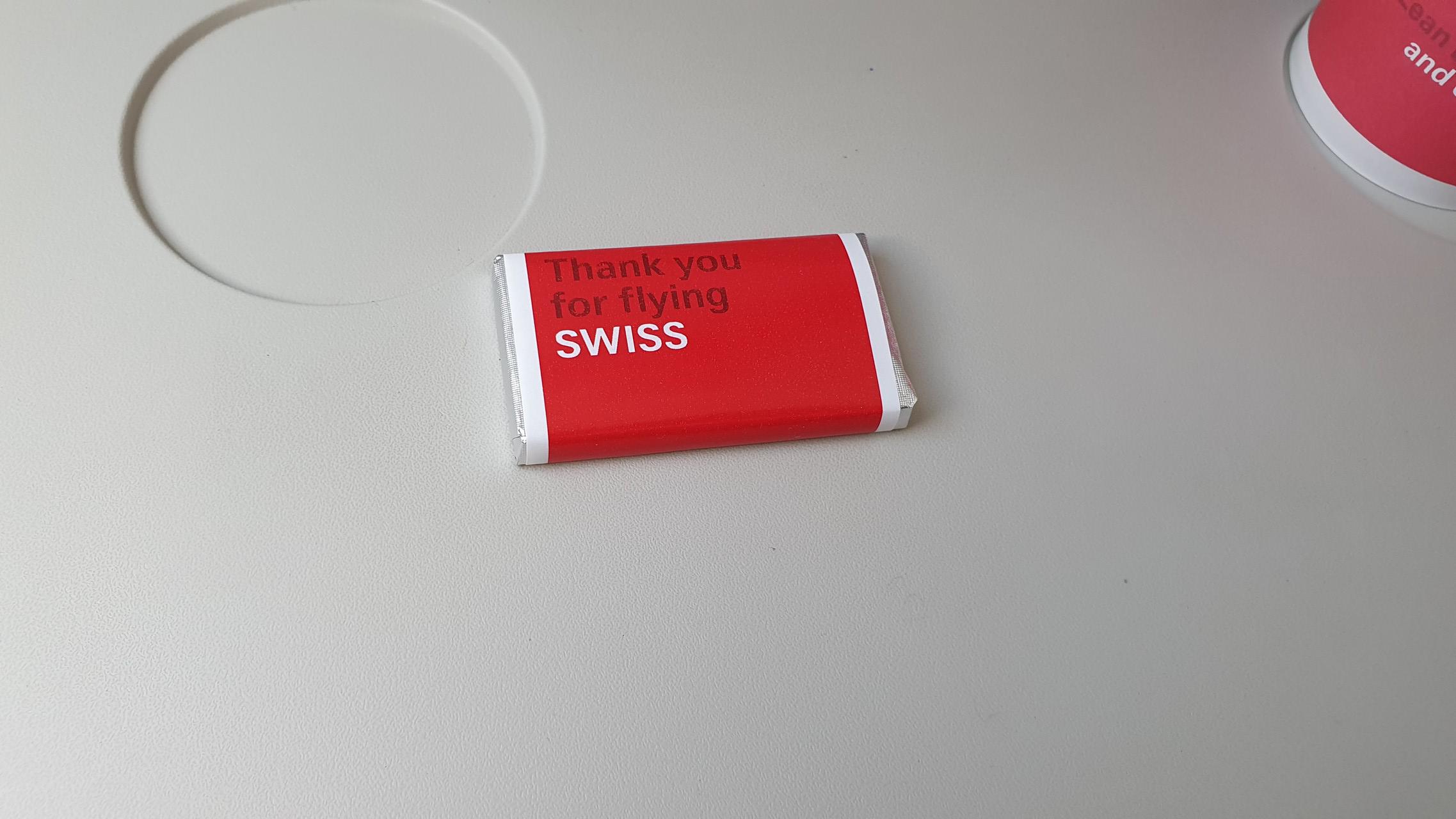 By the time the flight attendants were done with their service, it was already time for approach and cabin crew came around to do a quick clean sweap and to collect the contact tracing cards (so far I haven't received any calls yet, so I guess it's a good thing). 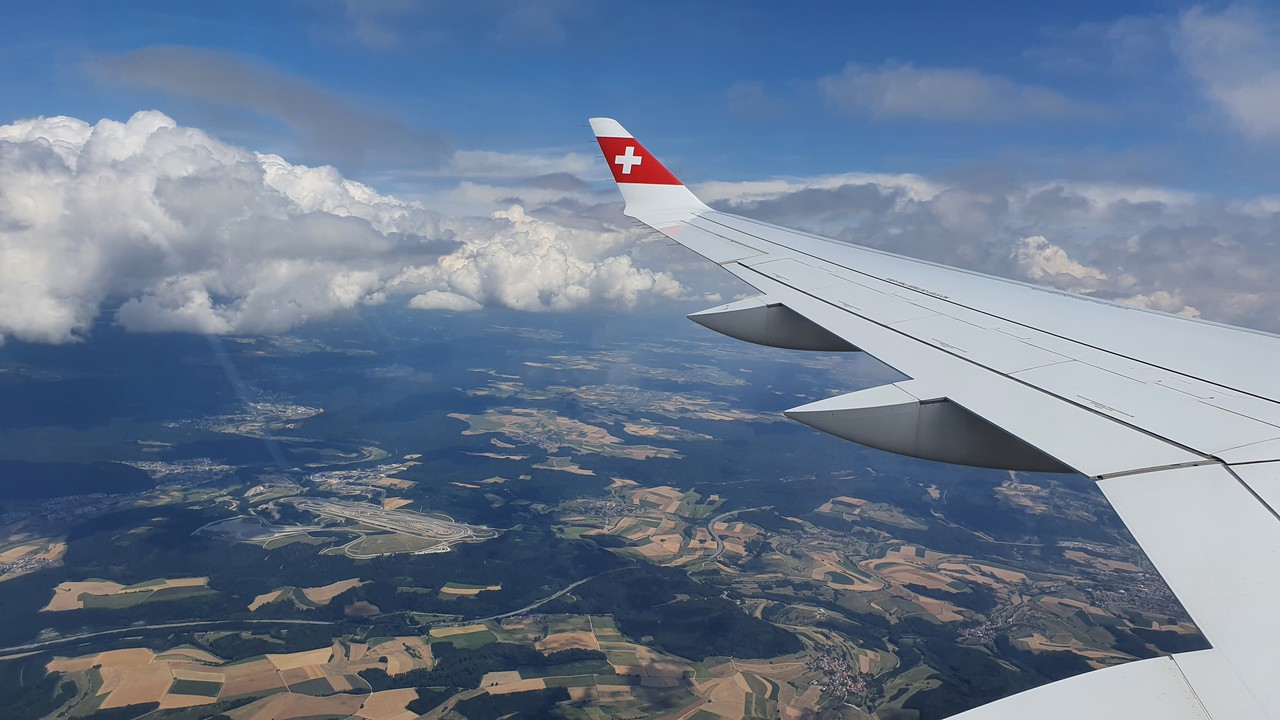 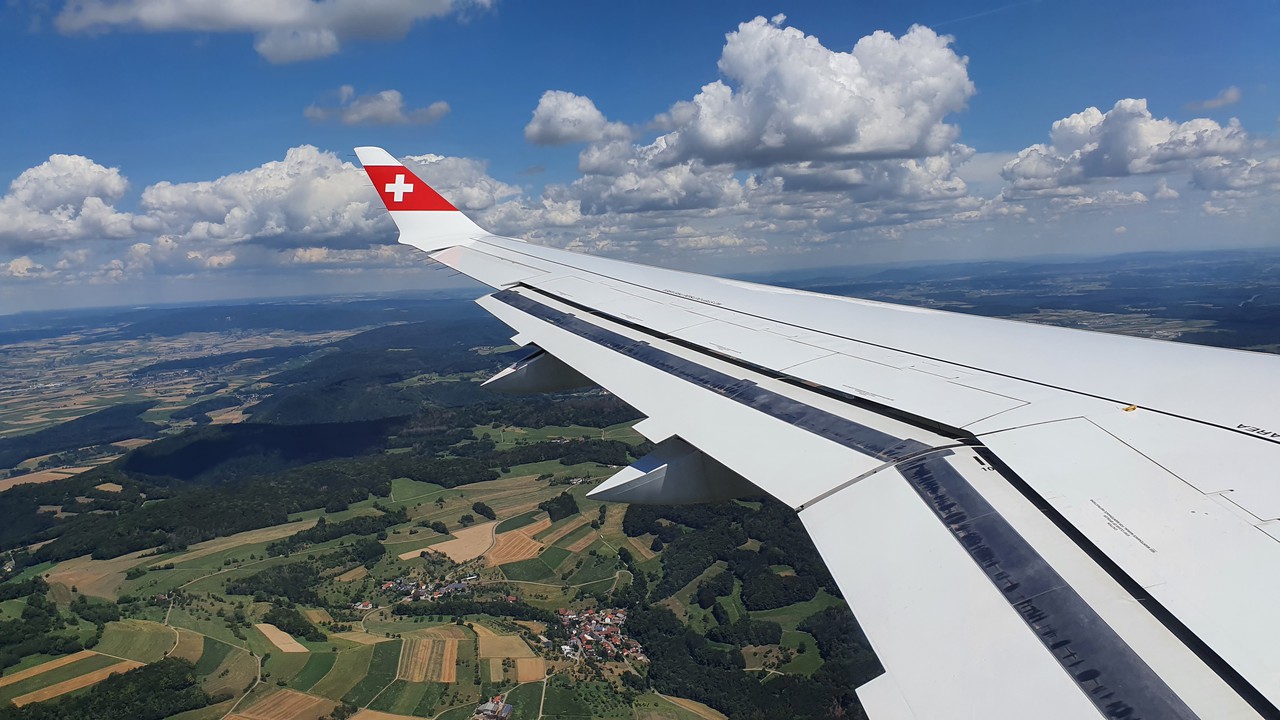 The landing was excellent with a two minute delay in total, but the ride to our parking stand was quite a long one as it was the most distant one they possibly could find for us. 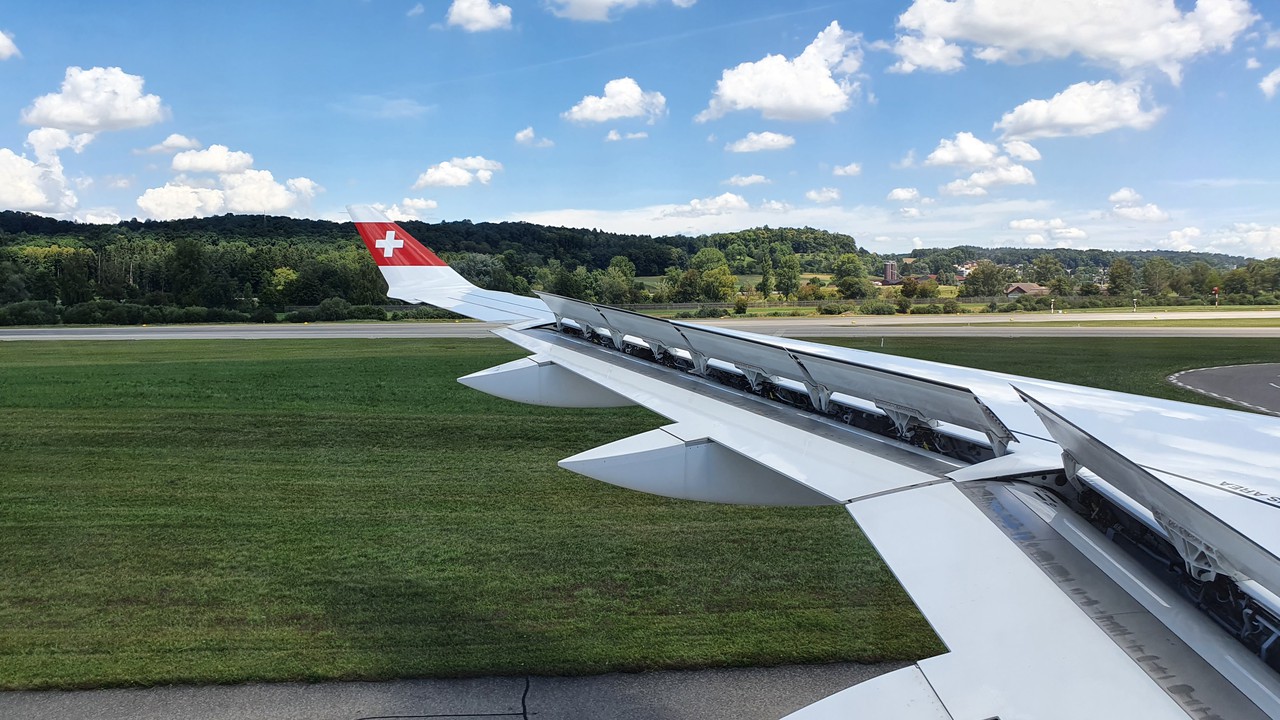 Eventually disembarking was done by stairs and were transferred by bus to the terminal. Despite not being able to comply with social distancing within the bus, Swiss made sure that they didn't get overcrowded too and provided enough buses to ship us safely.

Unfortunately due to an unfavourable gate in Frankfurt and the stairs used on the aircraft in Zurich, I couldn't take a proper photo of the aircraft. 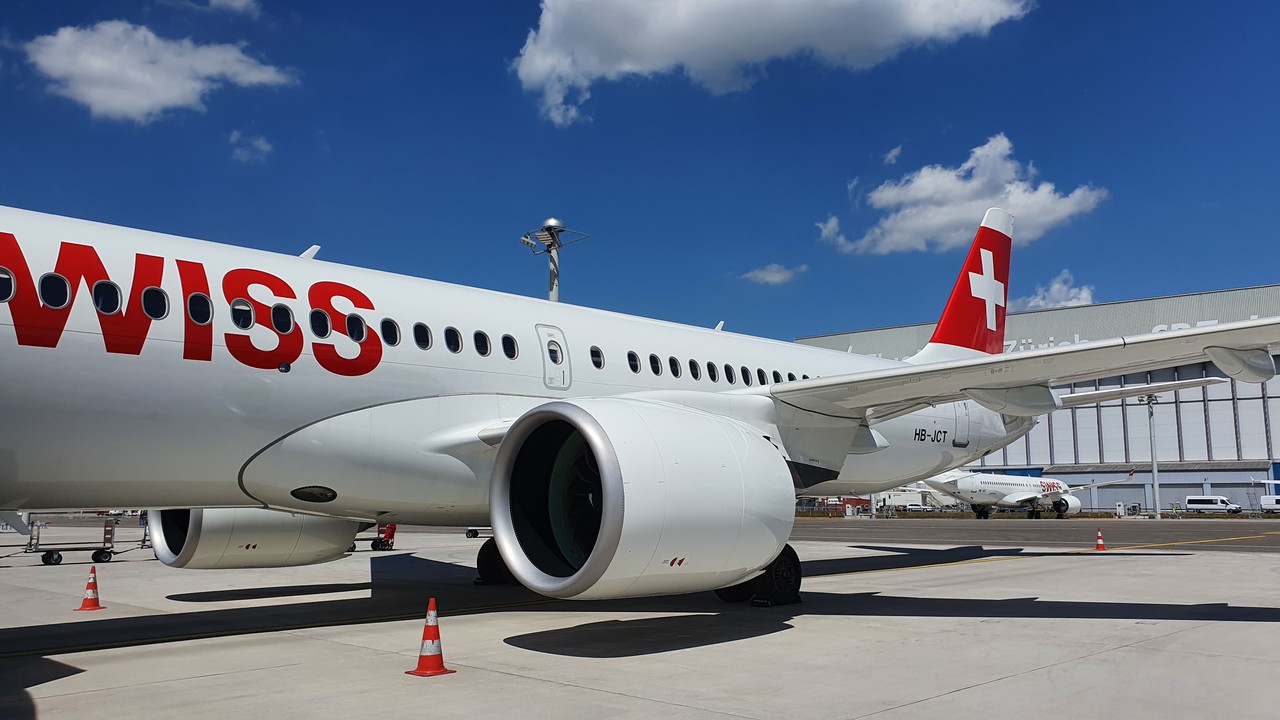 I booked the Radisson Blu Hotel Zurich Airport for a single night which was easily found as signagne was easy and clear. Checked in and eventually made my way to downtown Zurich (15 minute ride for 6.80CHF one way) for the meeting I had to do. Would definitely recommend this hotel. 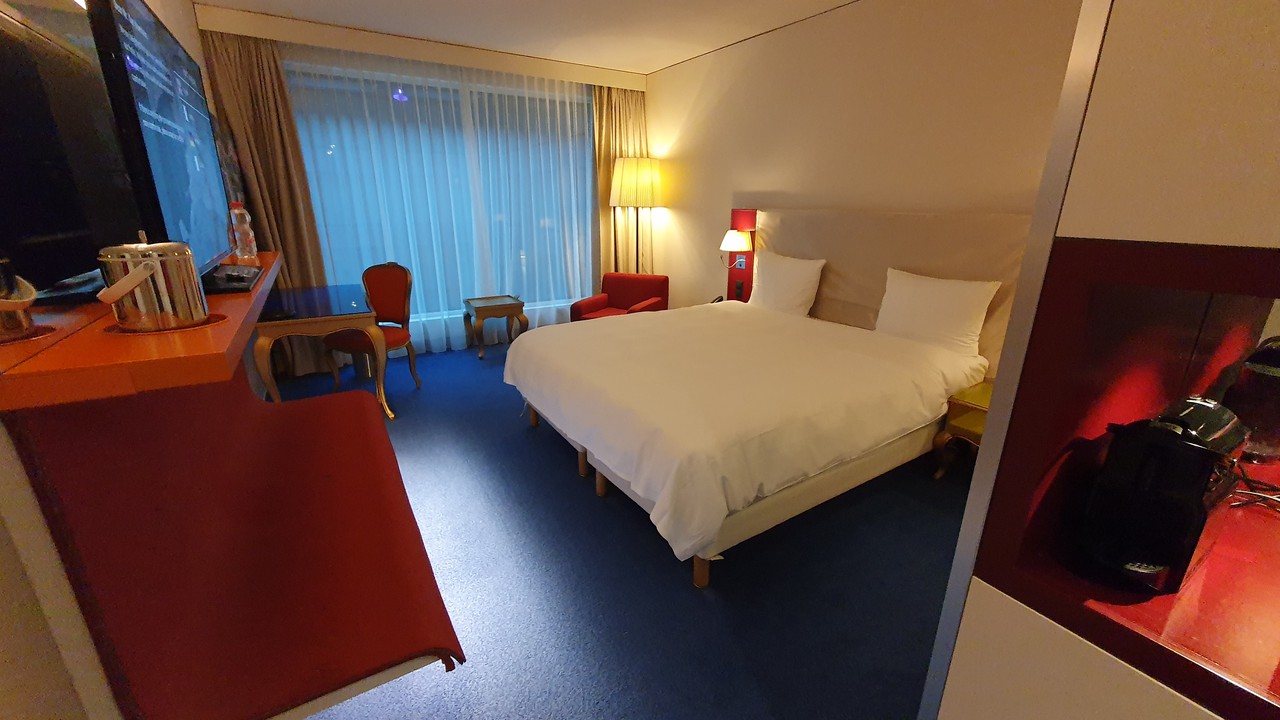 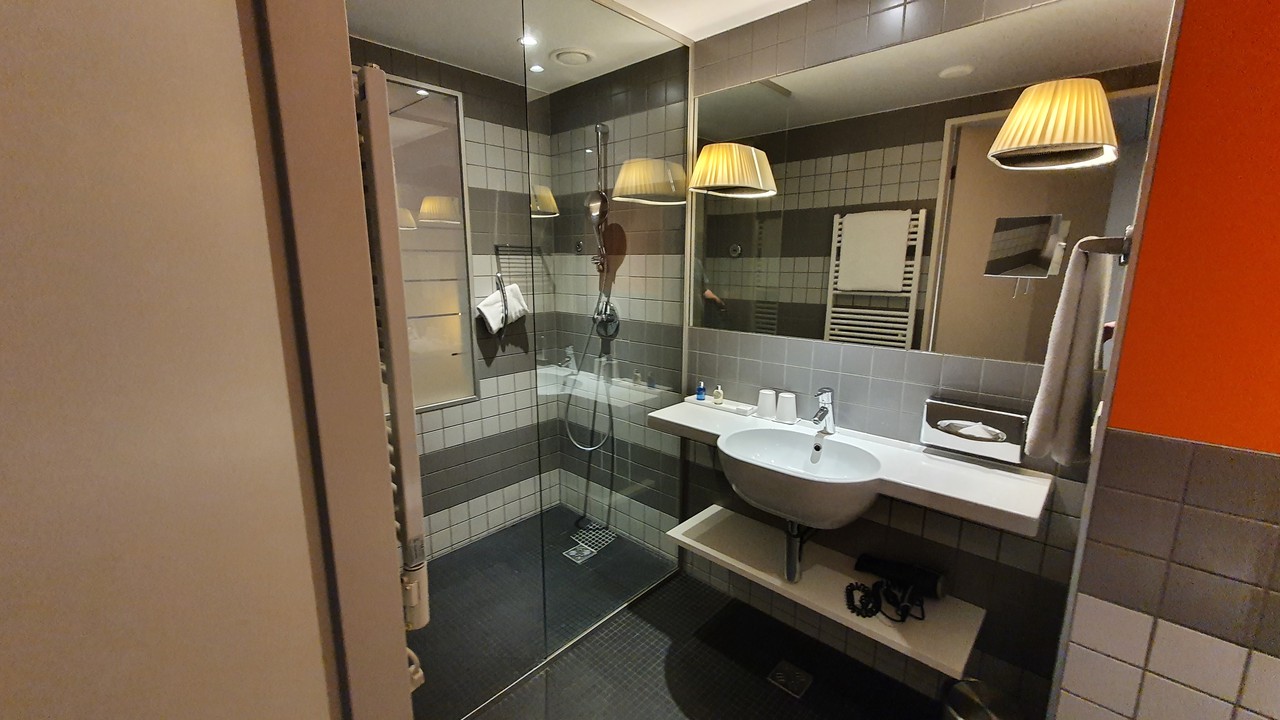 Despite it being a very short hop to Zurich, Swiss in my opinion did an excellent job (in current conditions). Cabin crew was outstanding, service was stripped down, but gave us a few choices and the aircraft is definitely one of the better regional jets out there.

The contributors of Flight-Report published 6 reviews of 2 airlines on the route Frankfurt (FRA) → Zurich (ZRH).