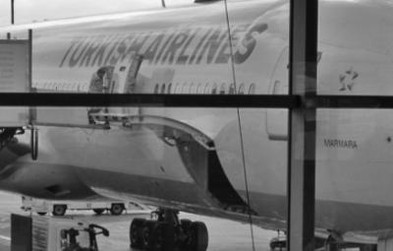 #18 out of 80 Airlines A minimum of 10 flight-reports within the past two years is required to appear in the rankings. 698 reviews

By jetsetpanda 9277
Published on 8th October 2013
After a couple of days in Istanbul and Cappadocia, it was time to return home. I decided to arrive at the airport at least 2 hrs. before dept. to allow plenty of time to go through security and check-in.

Once I arrived, the scene was total chaos. In Turkey, you must go through security before you are allowed to enter into the terminal and it seemed that everybody decided to fly today at the same time. There were 4 lines to go through security, two on each side of the entrance lobby. After I waited patiently for what seemed like an eternity, I was finally inside and proceeded directly to the TK counter to check-in. There was a designated area for all North American flights and when I was in line, a friendly agent approached me and started asking some security questions. He then requested my passport and told me that he will meet me at the end of the line. Once there, he hands the passport to a colleague who in turn asked me more questions. Satisfied with the answers, he placed a sticker on the back of my passport cover and invites me to proceed to the check in counter.

A smiling agent signals me to come over and checks my passport. She hands me my boarding pass and I inquired about an upgrade to Comfort Class. She tells me it is full but Business still had 4 open seats. My ears perked up and I asked her how much for the upgrade to J. She then directs me to the ticketing counter located a few rows behind. I made my way to the counter faster than a roadrunner with the anticipation of snatching a coveted business class seat. Was today my lucky day? No so fast. After a good 5 min. wait in line, I approached the agent and asked if an upgrade to Comfort class or even Business is available at this point. She typed on her computer and said that she cannot process the upgrade because my ticket was issued by AA and not TK. All of a sudden I saw red all around me, bloody red to be precise. The agent kept talking but I was not able to hear anything. I just went from a state of elation to one of disappointment within a few seconds. This did not make sense at all. I was able to upgrade out of LAX and now they are telling me that because my ticket was issued by another party they were unable to process the upgrade, even after I started the trip and was willing to pay extra. It is now a little less than 1 hr. before dept. and I still have not cleared security and immigrations. I thought about requesting to talk to a supervisor right there, but with time ticking away, I decided to let go of this battle.

I was fuming and there was already a line at the immigration counter. My passport was stamped and I went through another x-ray clearance quickly. As luck would have it, my gate was all the way at the end of the terminal. Another round of questions ensued and finally at the last security check point I was allowed inside the gate area. Almost all the seats were occupied in the tiny holding area and today's flight was going to be full. About 10 minutes later an agent made an announcement to board the plane. Earlier I saw a wheelchair pax rolled into the plane first and then it was a free for all. No invitation for Business class pax or those traveling with children to board ahead. Thankfully I was positioned next to the door and boarded quickly.


My plane at the gate


We boarded from 2L and there was a couple of smiling FA's stationed at the door entrance welcoming pax. I made my way to the rear where I was in the last row. There were 2 FA's positioned in the back and one of the welcomed me with a big smile and helped pax find space for their luggage in the overhead bins. I was assigned 53G, an aisle seat in the threesome middle and each seat had a blanket, pillow and earplugs in a sealed bag. I noticed that the bin right above 53 does not open, so you need to find alternate bins if you need to store anything overhead. I was praying for an empty seat next to mine and my prayer was answered. As a matter of fact, the middle section was going to be all mine until a guy moved to the aisle seat on the other side. From what I could see, every seat was occupied except for the one next to me.

When it comes to economy class, TK offers an excellent product. Once the seat belt sign was turned off a few minutes after take off, FA's sprung into action by distributing amenity kits, printed menus and customs/landing forms from a cart. A menu in economy class is a rarity these days, and an amenity kit is even rarer. Another unexpected surprise is the distribution of hot cloth towels before every meal service. These towels are comparable to what U.S. carriers use on domestic flights in F. Then the drink cart makes an appearance followed by the distribution of the meals. There are two selections to choose from and if you are sitting all the way in the back, the FA's start the service from back to front, at least when it comes to the rear cabin. Metal utensils are also provided which somehow elevates the dining experience on this carrier.


Amenity kit and menu. The kit is comparable or better than what other carriers give in J class. This is perhaps the best Y kit out there.


Today's meal selections were Turkish minced beef with ratatouille and tomato bulgur OR chicken cutlet with pureed, fried eggplant and rice. In addition to this you will find a salad with mozzarella and marinated green beans as appetizers. For dessert a chocolate mousse was offered which was every bit as decadent as the name suggests, topped with a dollop of whipped cream and a sour cherry on top, contrasting nicely with the rich sweetness of the mousse. FA's ask if you need water when they offer you the meal and they offer you a warm roll from a basket at the same time. The meal was probably one of the best that I have ever had in the back of a plane, and much more satisfying than other meals I have tasted in premium cabins. At the end of the meal, when trays are picked up, FA's offer tea or coffee. When all the trays are collected, the FA's will then distribute individual bottles of water to each pax signaling the end of the first meal service. I was dozing off when this happened, so the FA left a bottle in my seat pocket which I found handy when I woke up. If you feel peckish, you can always help yourself to as many cheese sandwiches and cherry cakes as you want in the galley. These packaged goodies are what TK gives for meals on domestic flights.


Drinks and hazelnuts before the meal


Meal cart with meal tray. Notice that the dishes are still wrapped when the tray is handed to you


Snacks after the meal service


At about 2 hrs before arrival, mood lighting is turned on signaling the start of the second meal service. Once again, hot towels are distributed but there is no choice of snack this time. What you get on TK as a light meal or snack is comparable to a full meal on its competitors. On the tray there is an herbed chicken fillet with mushrooms raviolis and sauteed spinach as the main course, accompanied by artichoke in olive oil for appetizer and apple strudel with whipped cream for dessert. Let's not forget the freshly baked bread which is individually placed on your tray.


Mood lighting to wake up passengers


Pre-arrival snack. This is considered a meal on other airlines. Pretty generous of TK and look at the level of presentation. Just excellent!


As far as service is concerned, FA's presence is minimal outside of meal service. Drinks and snacks are set in the galley and water runs are not offered at all. The crew can be a mixed bag, ranging from truly outstanding to indifferent and robotic. I have noticed that the English level tends to vary and some staff need more training in this area than others. I will definitely fly them again and hope that they start SFO as a new destination soon.

TK Y is a solid product that provides great value for your money, especially on long haul flights. The fact that they even provide an amenity kit, printed menus and cloth towels is really generous. Their catering continues to be a strong selling point and this was evident on my flight. The quantity and quality of my meals were above and beyond what the competitors serve, especially when compared to U.S. carriers which seem to outdo each other on their race to the bottom.

The only minor setbacks are the seats and the uneven standard of service. The seat pitch on my 777-300ER ranged between 31-32 or 78.74-81.28 cm., which I guess is standard but could be better. If TK increases it to 34 or 86.36 cm, then it would be the perfect Y product for me. Service tends to range widely depending on the individual FA. I have encountered some that were the textbook of what a FA should be (charming, professional and gracious) while others were more reserved and distant. Perhaps it is a cultural thing and a reflection of the extremes that one sees in Turkish society.

The contributors of Flight-Report published 6 reviews of 1 airlines on the route Istanbul (ISL) → Los Angeles (LAX).

The average flight time is 13 hours and 53 minutes.