By marathon GOLD 2177
Published on 2nd November 2013
I lived for slightly more than two years in Mainland China, but since Mainland China only delivers one year resident visas, I have been able to come and go for three years. 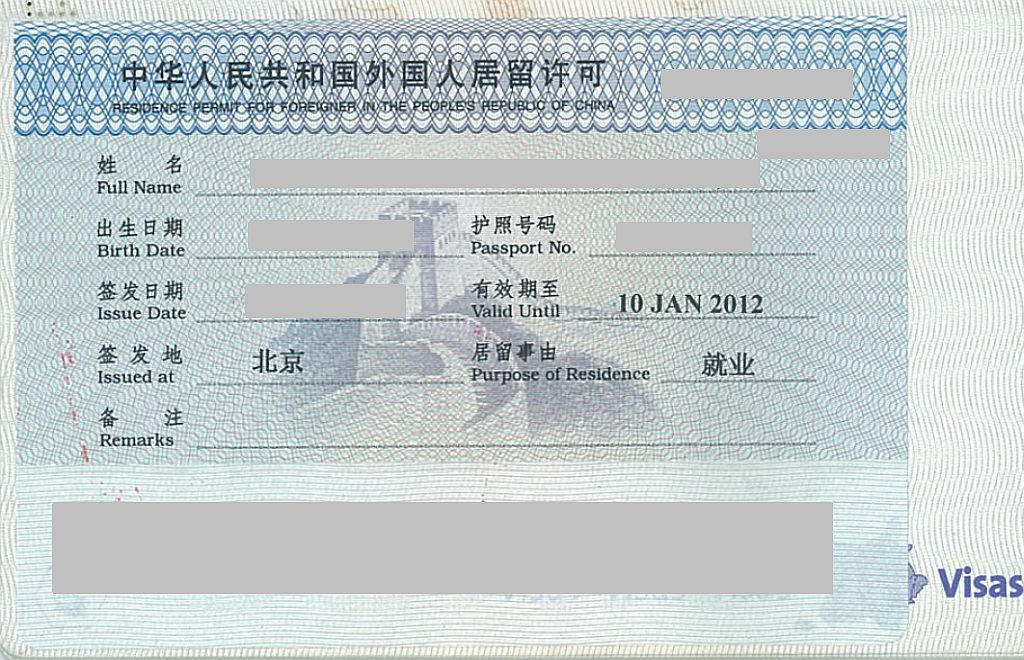 I wondered how to celebrate the expiry of my visa and decided to use a circuitous route to visit friends in Shanghai.

If your knowledge of the local geography is deficient, this is a map of my routing (thanks to gcmap.com). Remember that LZN and KNH are Taiwanese islands, even though this does seem obvious, and even though Mainland China claims that this trip was going to be entirely in China. 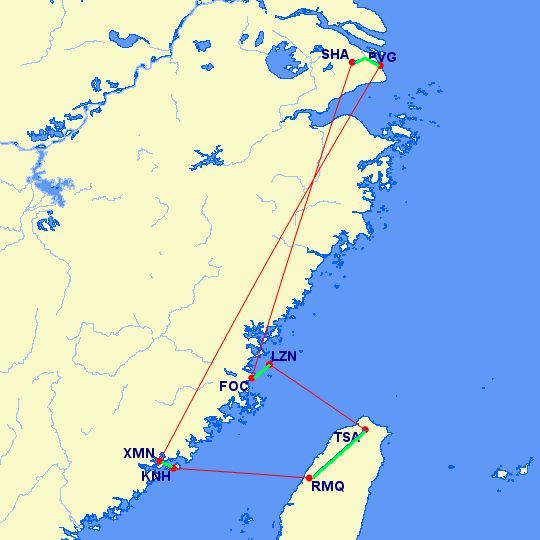 If you knowledge of the local history is deficient, I recall that the opening of direct links between Taiwan and Mainland China (without a connection in Hong Kong) started in 2001 by three ferry links: Kinmen-Xiamen, Kinmen-Quanzhou and Nangan-Fuzhou, in decreasing order of size of traffic. There are only two daily crossings from Nangan (LZN), because the Matsu archipelago is sparsely populated and always fogged out in spring. Another good reason to try and take it.

Few foreigners in Taipei can call a TSA-LZN flight routine, and most have never taken this route at all. Even though I flew half a dozen times to this archipelago, no two flight experience that been the same and this one was not going to be an exception.

There was an interesting feature in this taxi: next to the rear view mirror, there was the tiny screen of a miniature camera heading to the front, whose images are continuously recorded. In case there is an accident, it would help sort out the responsibilities. 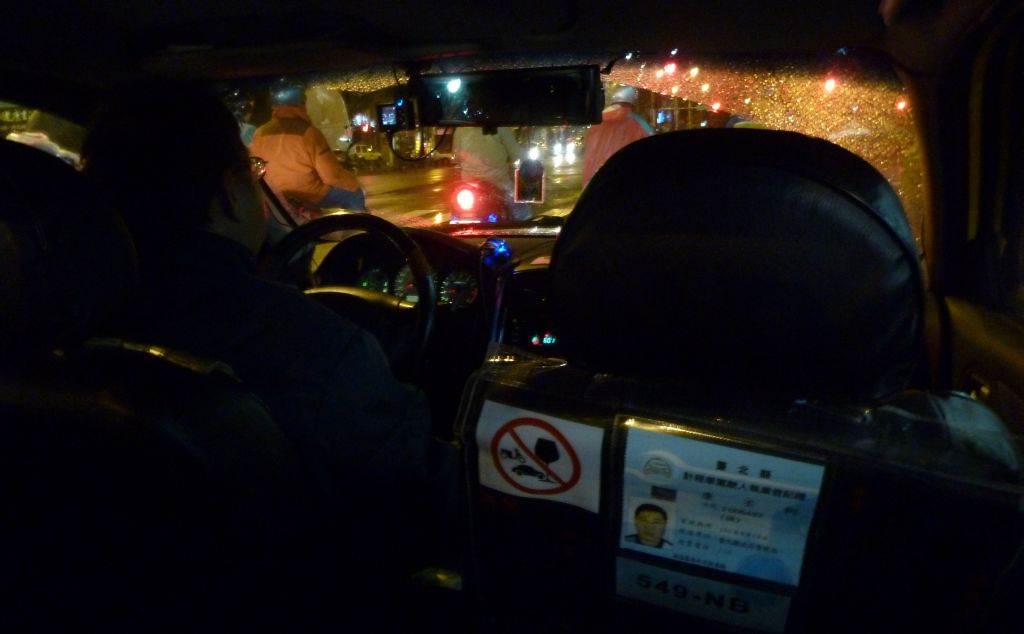 Arrival at TSA's domestic terminal: this was the first Uni-Air flight of the day, which was booked full. 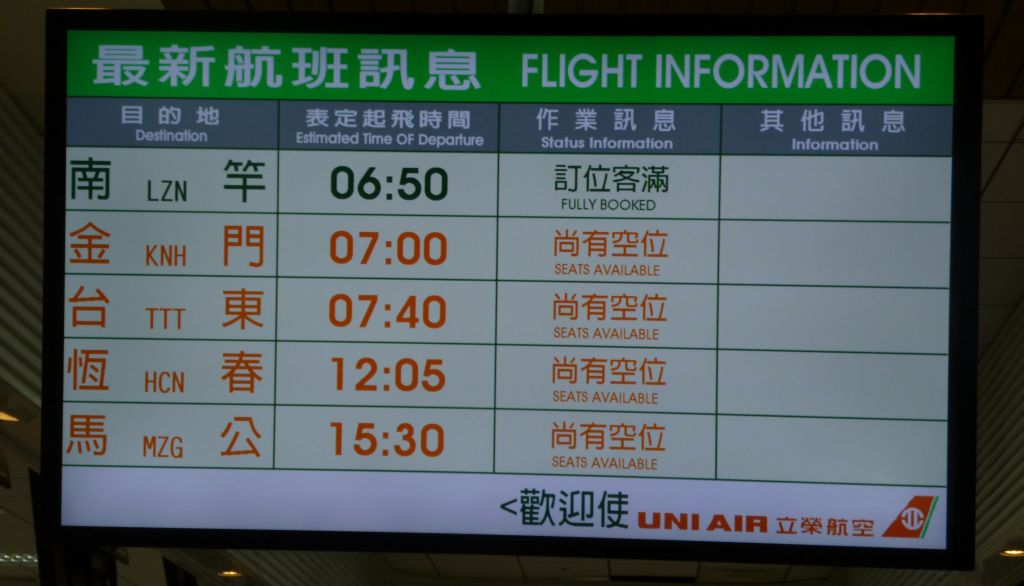 Uni-Air's self check-in machines were brand new then, and there was staff to help the passengers who discovered them – there already were similar ones in TPE. I unfortunately did not test my resident's card, and my passport was not compatible with these machines, so I checked in the old way. 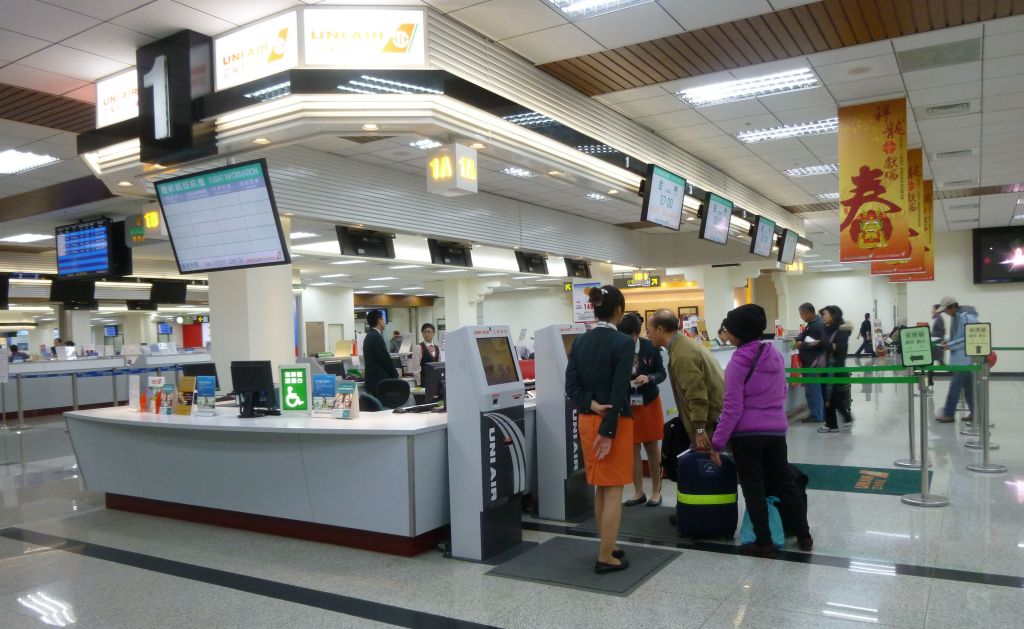 Thanks to FR, you already know every nook and corner of TSA's domestic airside area:

Another unavoidable part of a Flight Report, the inspection of the toilets which were of course spot clean. There are even sinks low enough for young children. 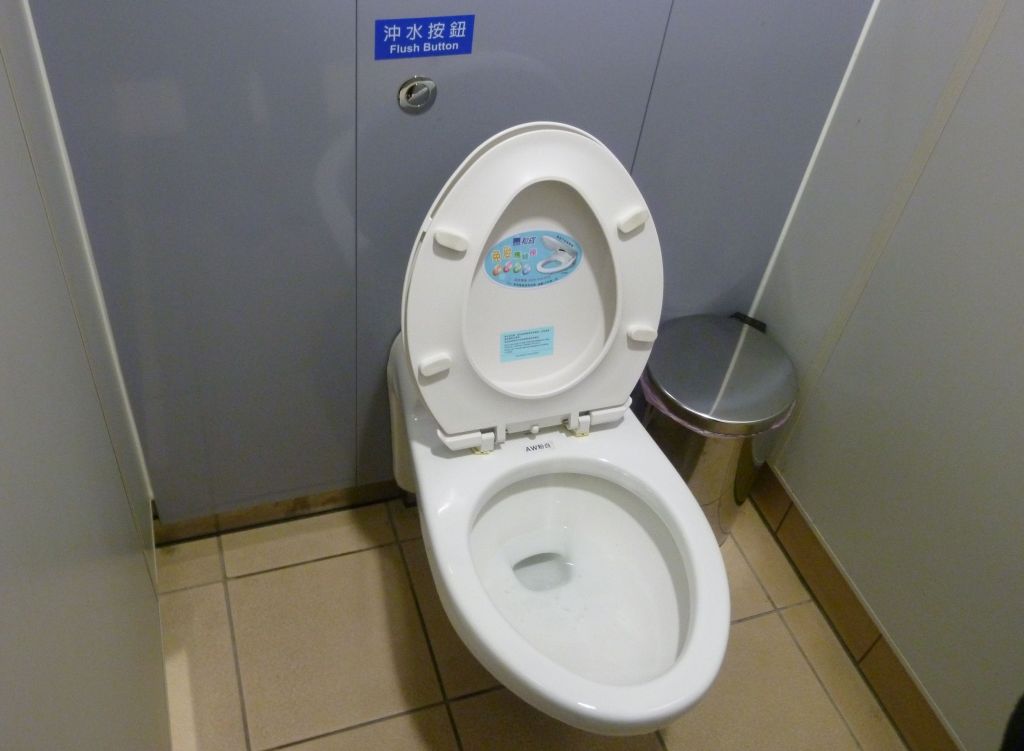 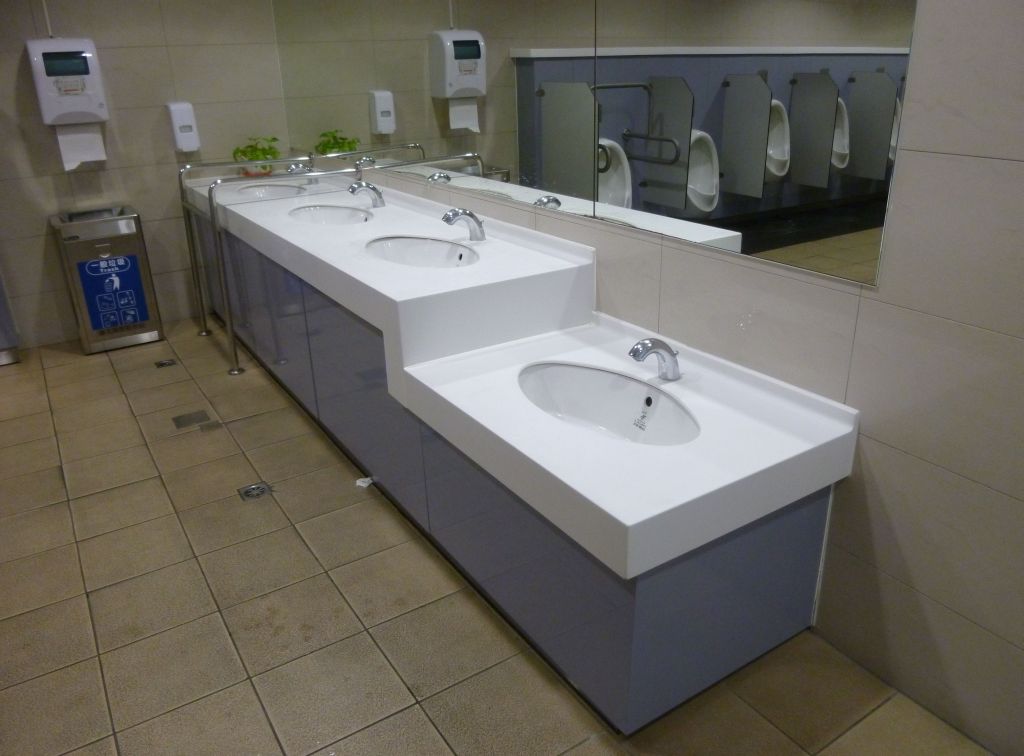 You know that there are two self serve computers for internet access, but I tried to change from the traditional corporate screenshot and introduced the 2012 Flight Report gadget. 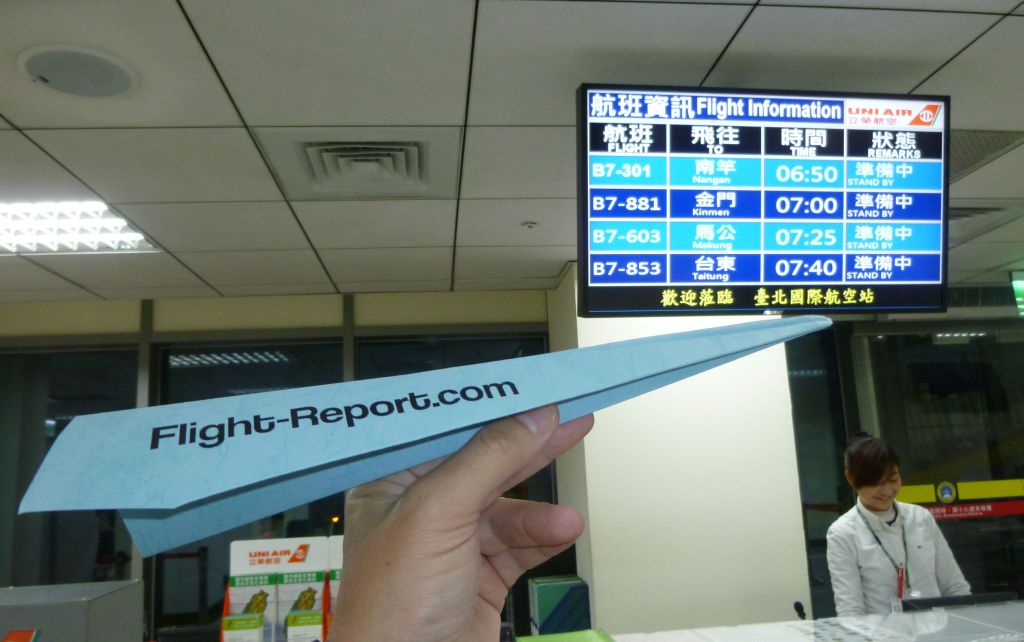 Printed here on 175 g/m² paper of the roughly correct corporate color, this derived product did not meet the success I had hoped.

This is the same landside, with the list of the first flights of the day. 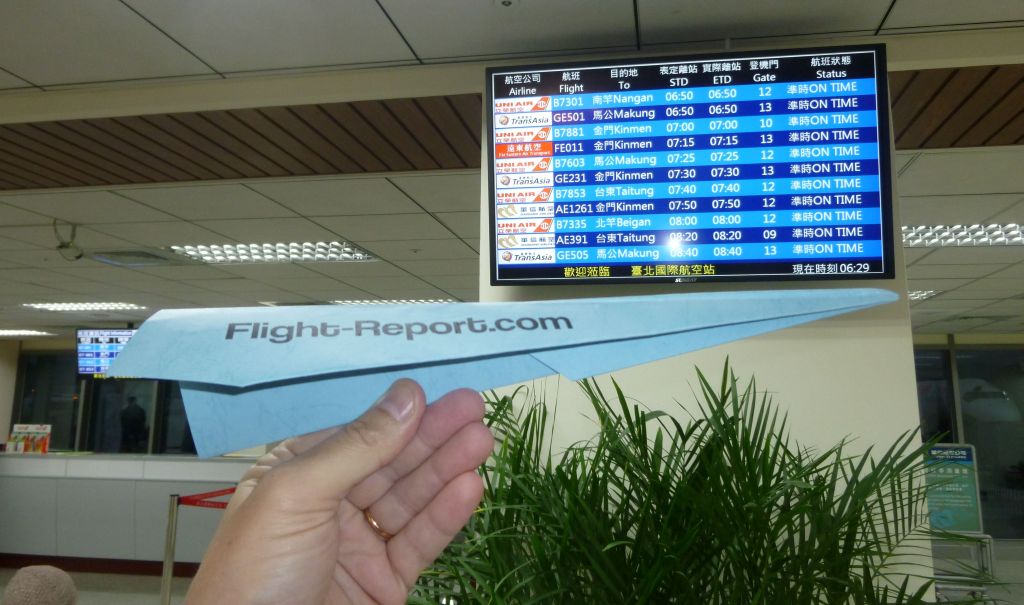 Uni-Air also had installed a brand new hand luggage volume gauge. There are two sets of dimensions, because there is more overhead space in a MD-90 than in a Dash 8. But do not expect sanctions like on European low cost airlines: only when a young female passenger had taken her seat did a FA tell her courteously that her outrageously oversized hand luggage on her lap (it would fit neither in the overhead bins nor under the seat) would had to be put in the hold for the flight's duration. 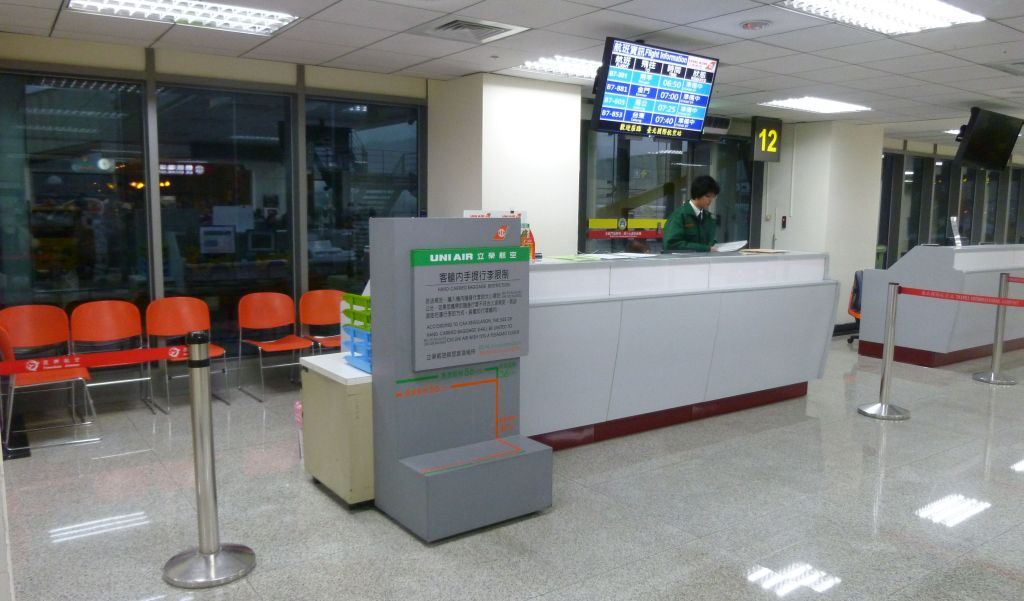 The place was full, and so was the bus to reach it. 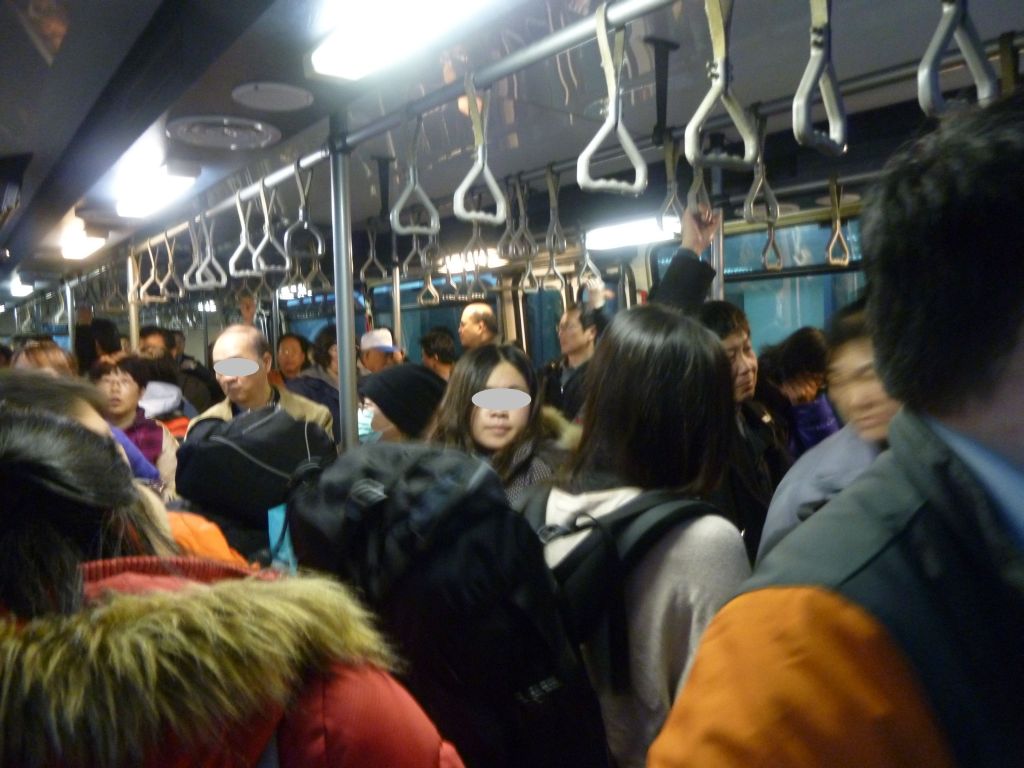 This is the plane – I am not the only one to take picture. We had had a dreadful weather for one week, and it had not improved on Saturday morning, and it was drizzling that morning.

With such a limited visibility on the ground at sunrise (assuming that you could see the sun), plane spotting is limited to this TransAsia Airways ATR-72 parked nearby.

Boarding, with a picture for registration number geeks. 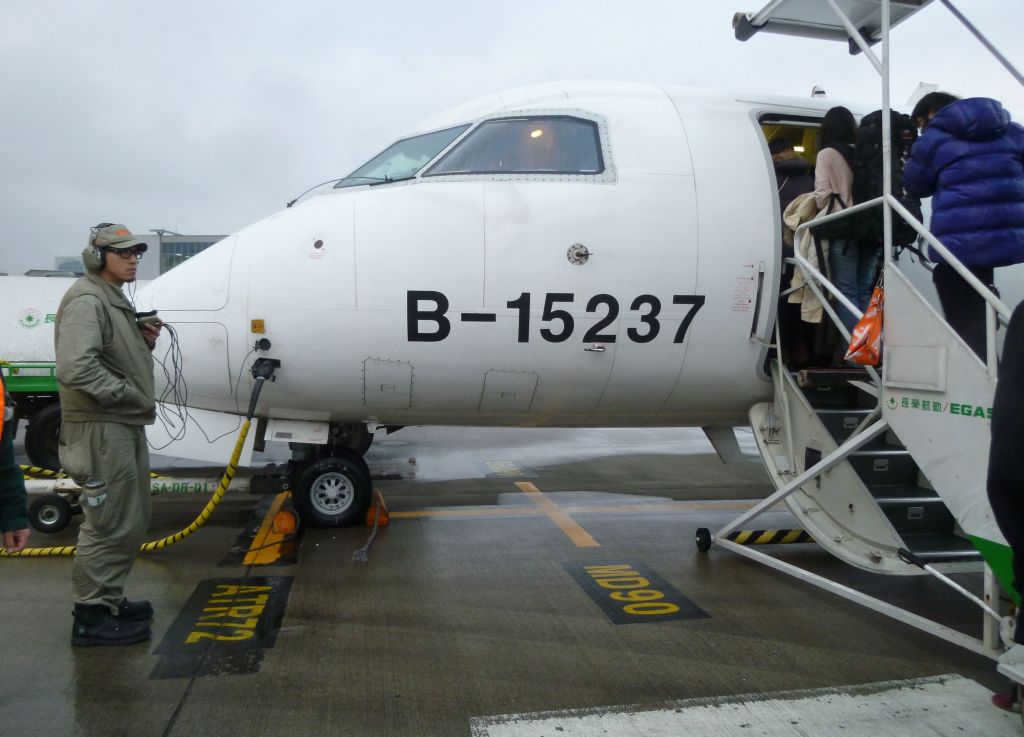 And another picture to make sure of the type of the aircraft. 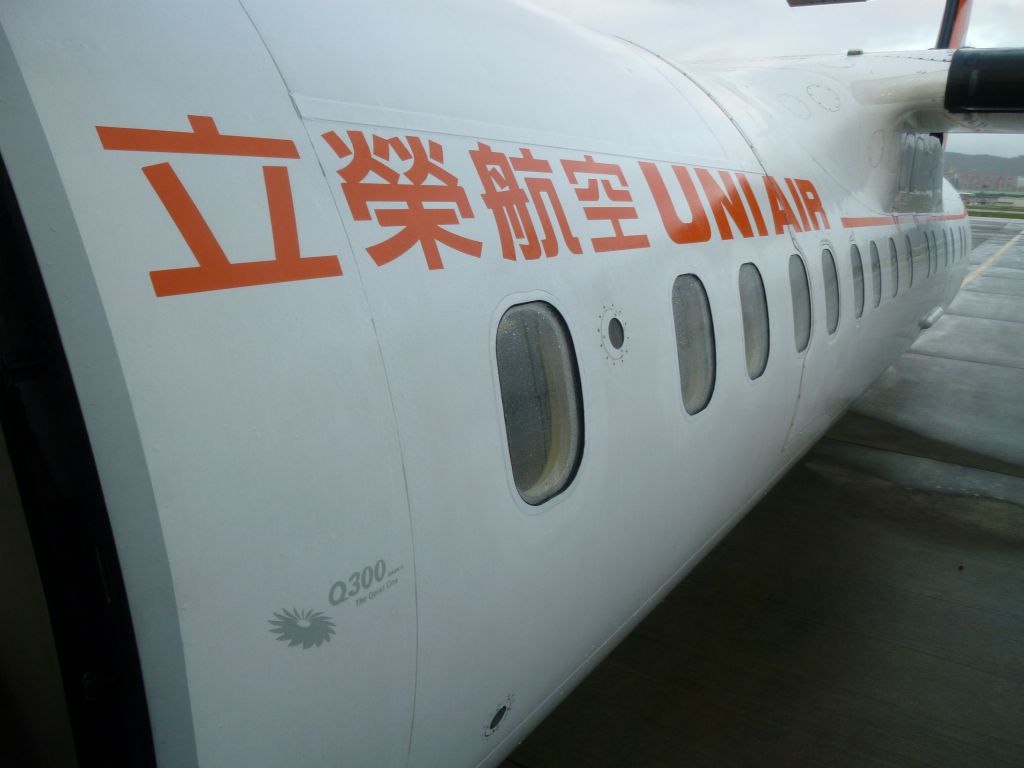 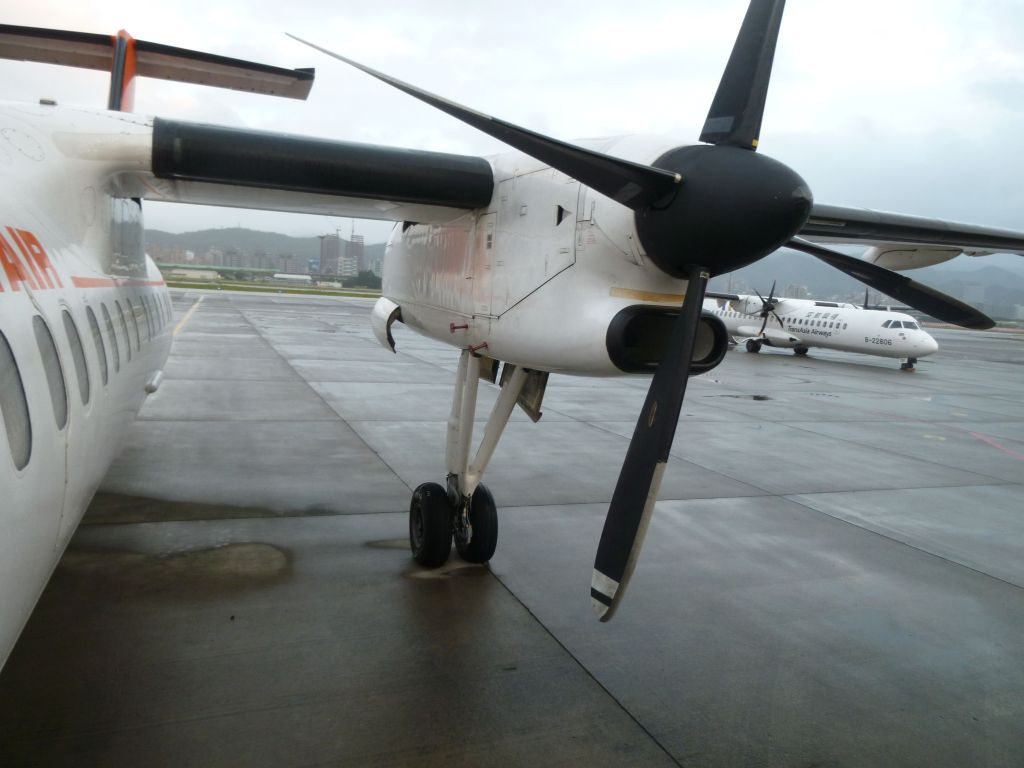 The aircraft was indeed full. 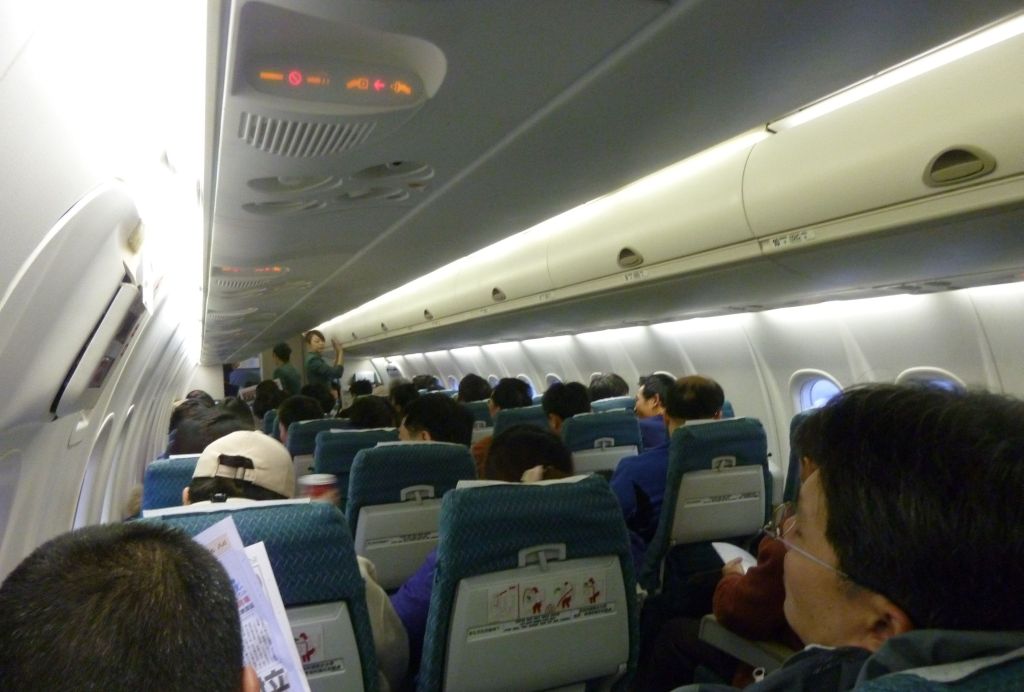 The safety card, the in-flight magazine and the seat pitch. 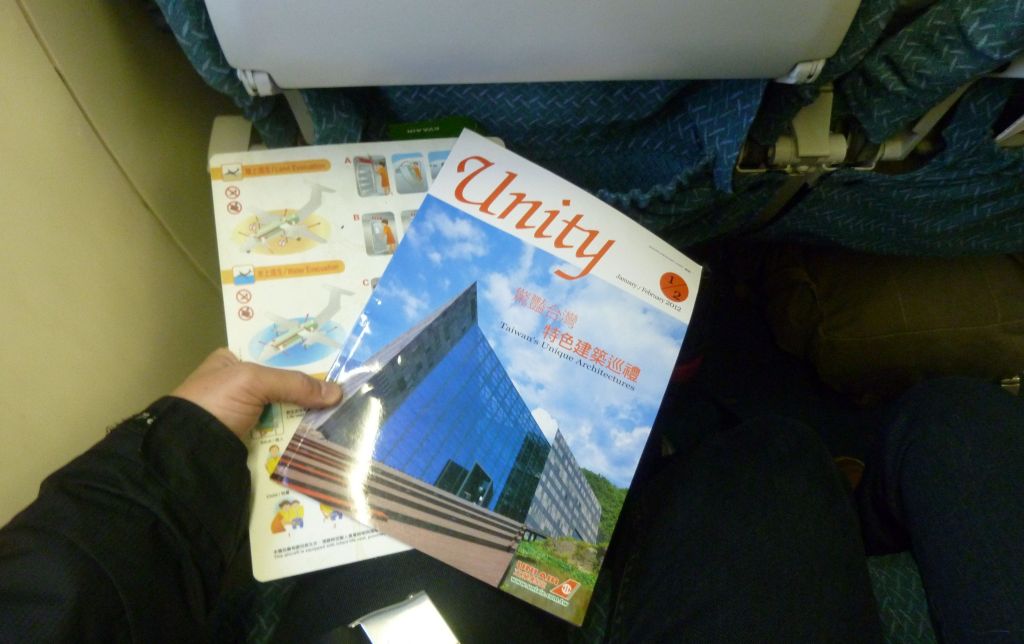 Soon after takeoff, we entered the cloud cover, and were going to take a long time to climb out of it. 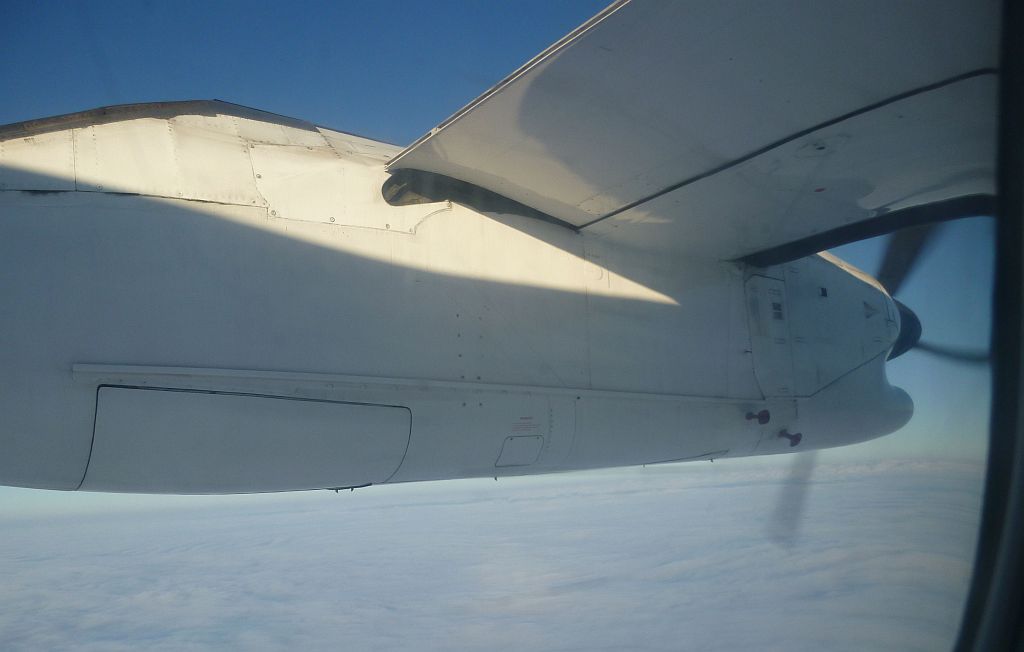 You can't see it well on that picture, but since we were just above the top of the cloud cover, I could see the shadow of the aircraft (my camera had a hard time focusing on the shadow on water droplets).

You know that the catering on board Taiwanese domestic flights is zero food and a single glass of coffee/tea/water of variable and usually disappointing quality. Uni Air's coffee is the best; that of most of its competitors is downright awful (on other routes, of course). Turbulences slow down the service without interrupting it. A bonus for the FAs who managed to serve all the passengers without spilling a single drop of drink.

The aircraft left the cloud cover six minutes before touchdown, when the wheels were already down and the plane low above the sea which was quite agitated. Sorry for the framing, but it was difficult to take pictures while being visible from the FA's rear jumpseat. If you compare with my other flight reports on the same route, you will understand that the weather was much less favorable. 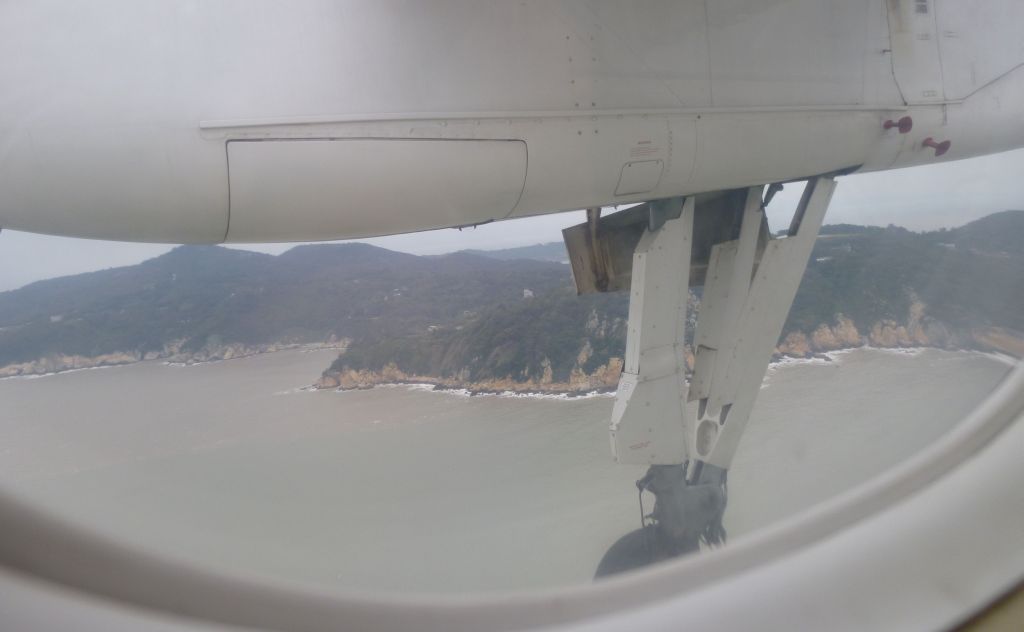 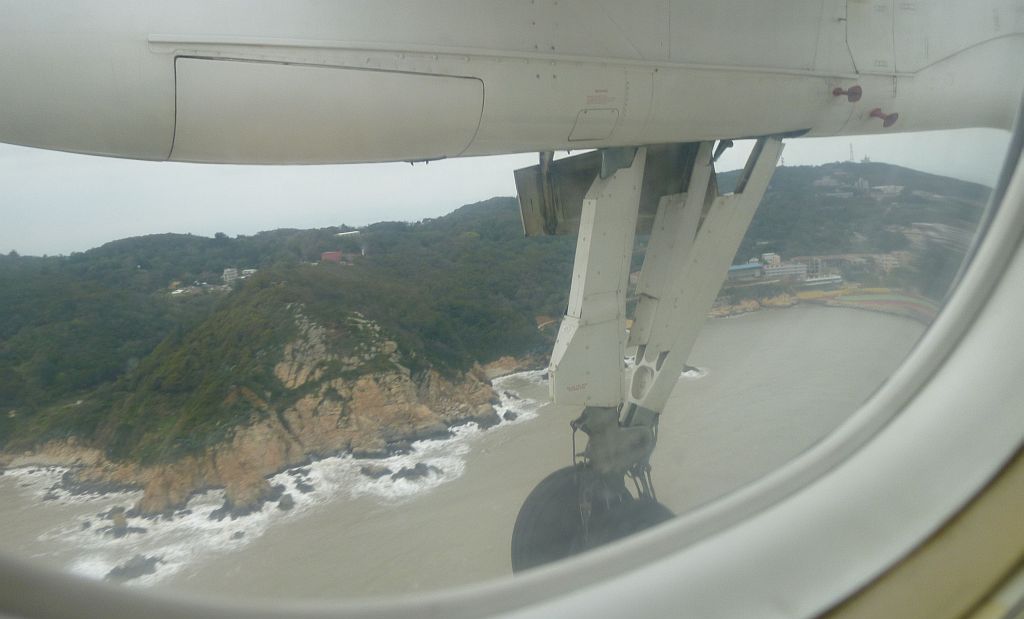 Touchdown sharp on time: the Dash 8 went all the way down the runway which ends with a cliff overlooking the sea.

The tiny galley; there are two seats on Row 15 without a window on the left on the other side. 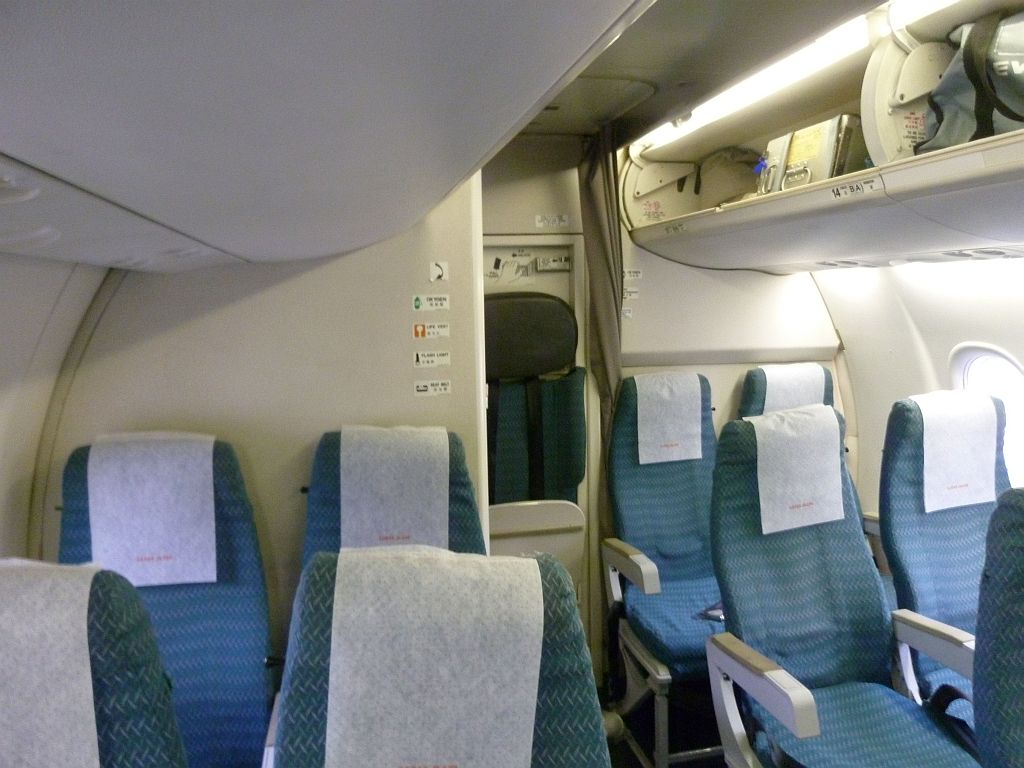 There are four seats fewer than you would expect though, because Uni Air is superstitious and does not have a row 14 on that plane. There are no seats on the left side of row 1 either. 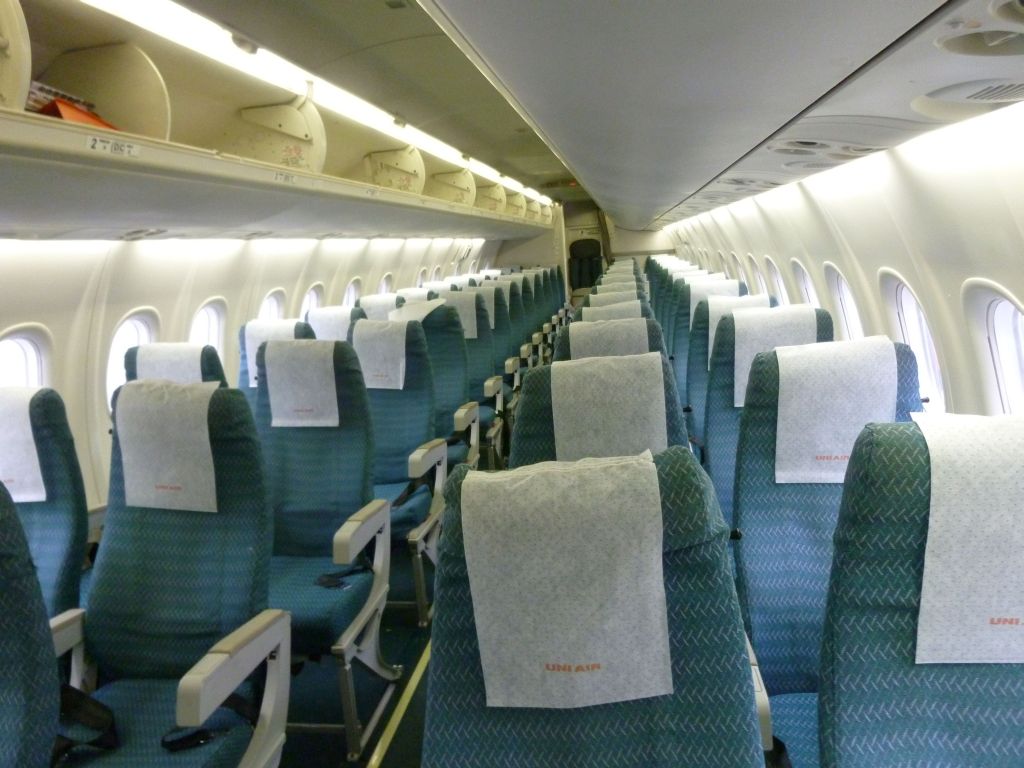 There it was on the tarmac of LZN, which was a lot less crowded than that of TSA.

I took a taxi to Fu'ao harbor, a few kilometers away : I had ample time. Only that…

Only that the driver told me: it's the winter schedule, there is a ferry in the afternoon only, the morning ferry will sail again in March!. I changed my plans: a U-turn to go to Jieshou (the small town that you saw in the final minutes of the flight) to rent a scooter and spend the time I would have to wait. He brought me to a B&B who had a several scooters for its guests. The owner was very friendly; OK for 400 TWD (the standard rate in Taiwan), no, no need for an ID. I explained the situation to her and settled in the lobby to change my plane reservation, since there was no way I could board my early afternoon FAC-SHA flight. Buying, changing, cancelling Chinese domestic flights is actually very easy when you bought them from one of two leading Chinese on-line travel agencies: their English speaking hotline is flawless – I put them to the test in numerous ways. The day they expand their operations in Europe, I do not give much survival chances to their European competitors, if the latter do not improve their quality of service and customer relationship.

It was slightly more complicated this time; I cancelled my Juneyao Airlines flight to Shanghai and booked another flight on Xiamen Airlines that I would need to pay in cash at the airport. Not a big deal, actually.

And when I eventually get out of my computer screen, the B&B's owner who had gone on line too told me: Hey, did you know that there is no ferry to Fuzhou at all today?. 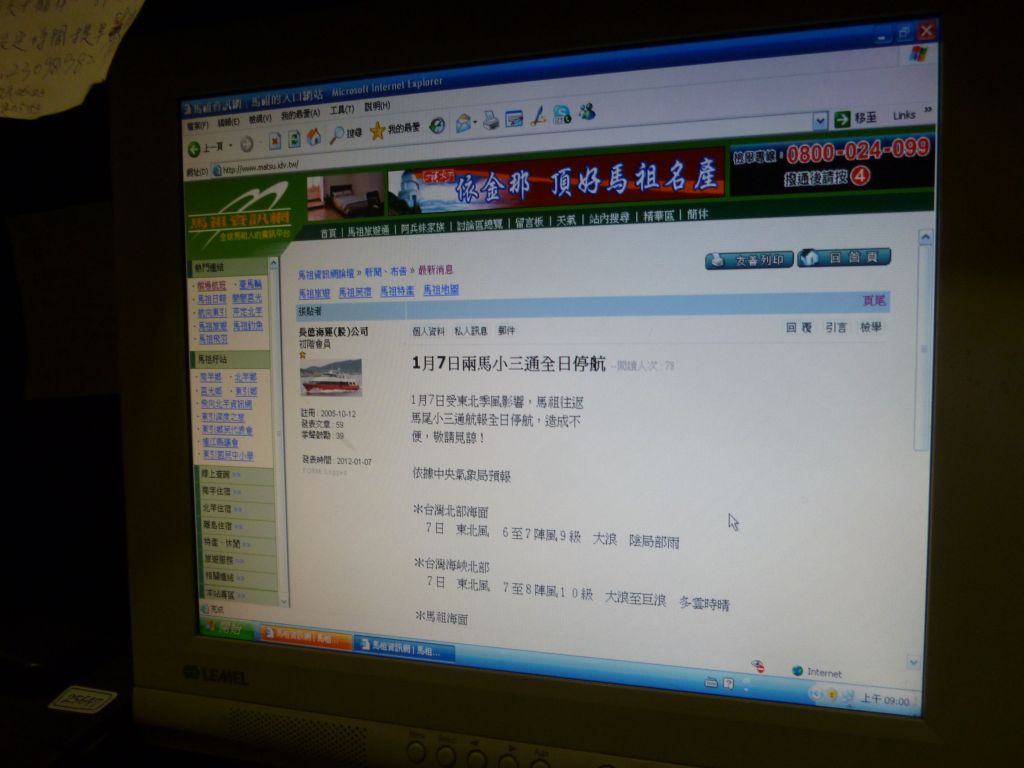 If you can read Chinese, you already knew it, but I discovered it at 8:58: due to the weather, the Taima (Taipei – Matsu) and the Xiaosantong (Matsu – Mainland) services to and from Fu'ao harbor were both cancelled that day. This was Fu'ao harbor, with the giant motto Sleep on spears while waiting for dawn (i.e. Let's be ready against any Chinese attack in the night, let's be ready to attack the Mainland at daybreak).

True enough, the water was choppy even in the harbor. 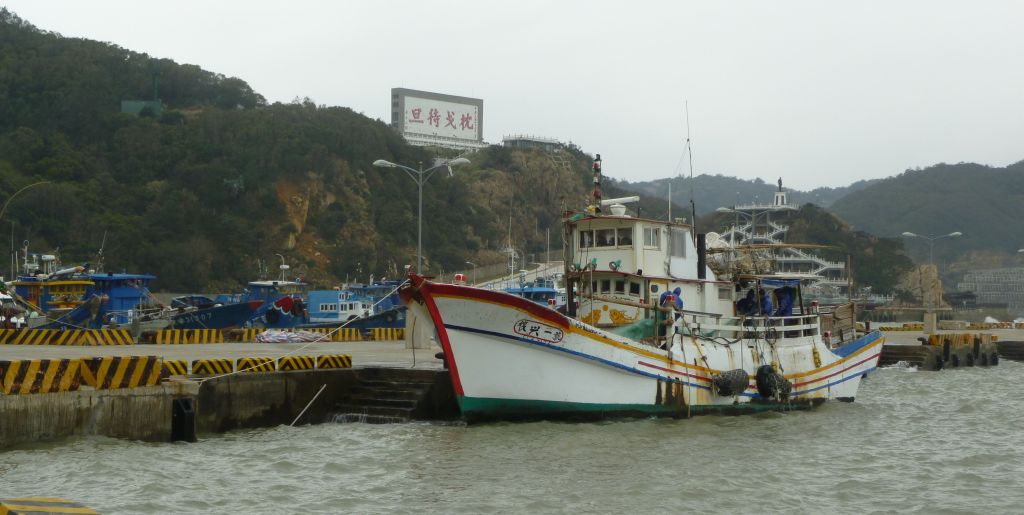 The ferry to China is no small boat, though.

O Sailors of the Matsu archipelago, why didn’t you trust the divine protection of Matsu, Queen of the sky and protector of the seamen? 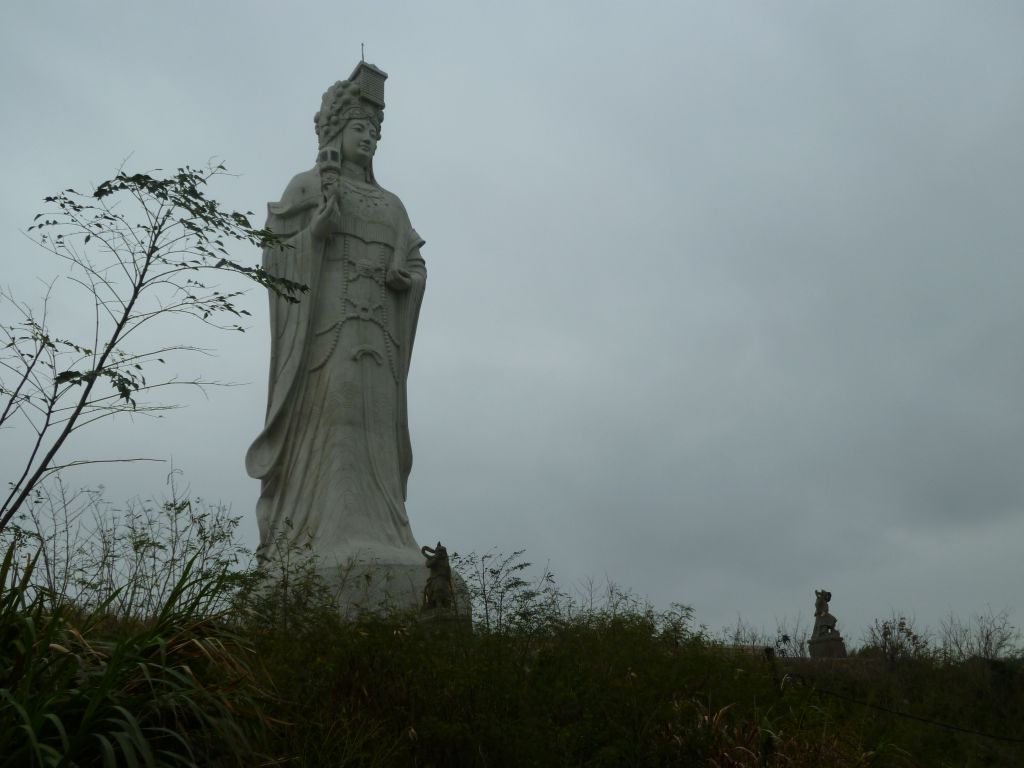 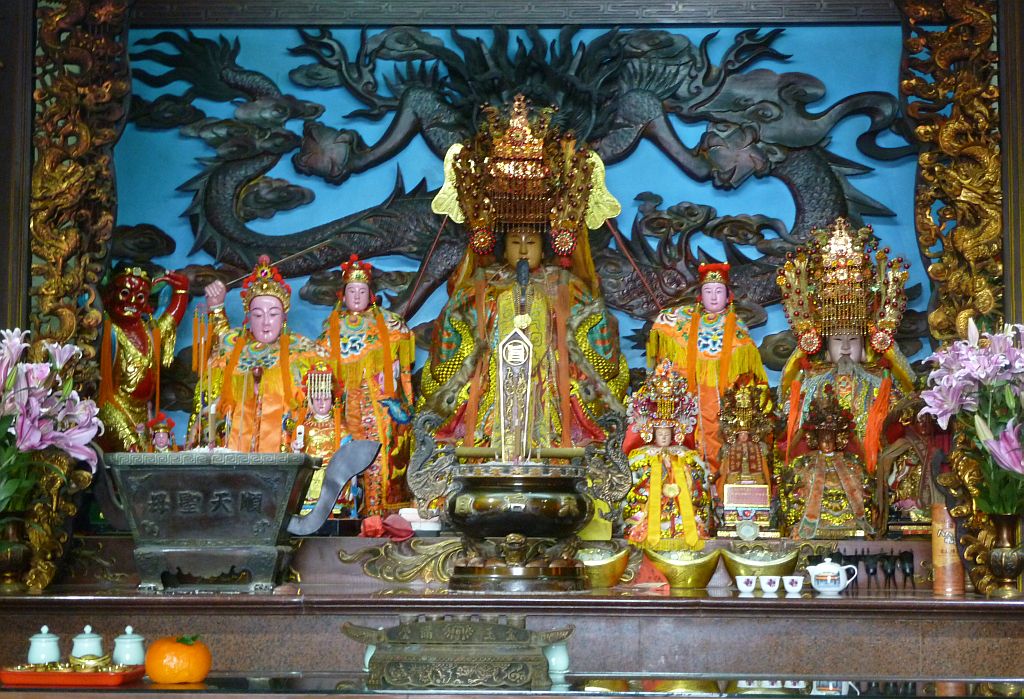 Matsu did not have much merit in protecting the local seamen if they stay ashore, but the truth was that it was very windy that day. (It is very winder even when the weather is good). I really froze on the scooter that I rented for the day, even though I had winter clothes, to go and express my disappointment to Matsu.

Another Skype session to call Ctrip and cancel my FOC-SHA and PVG-XMN plane tickets and tell my friends in Shanghai to cancel my dinner with them.

The Matsu Daily (a four page newspaper made of a single folded sheet – news are few on such a small archipelago) headlines that All sea and air links will be opened for the Chinese New Year, but that did not help me much, since that would be two weeks later. (That is the title on the left, in abridged style, but that does mean that, in no more than seven ideograms. Chinese is the most compact language that I know). They were expecting 160,000 travelers, to and from islands whose total population barely reaches 10,000 people. 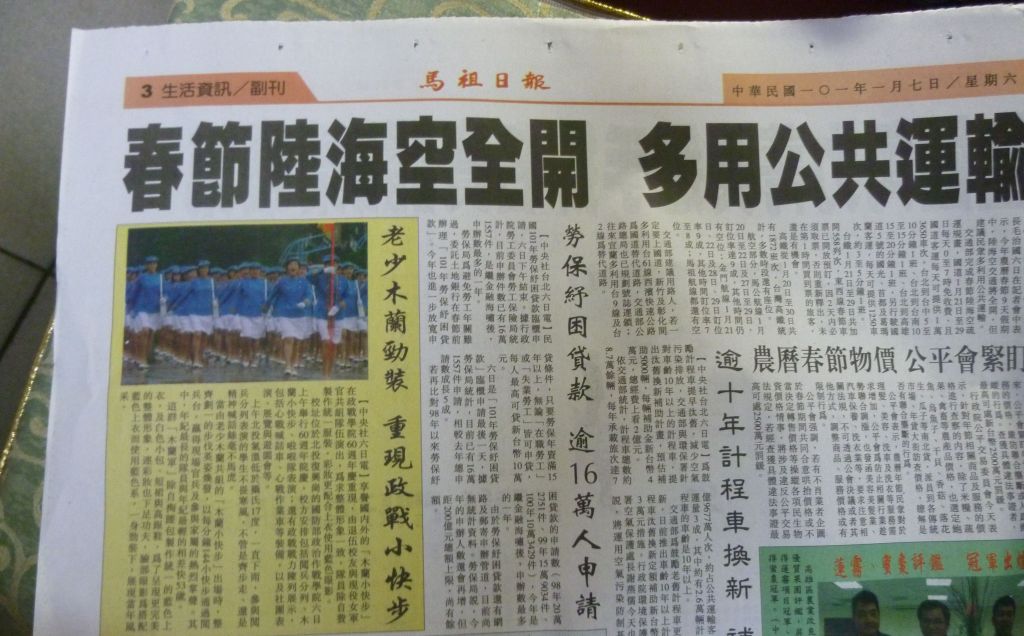 Let us summarize the situation: I was on a ten square kilometer Taiwanese island, twenty kilometers from Mainland China, all ships remained in the harbor and all flights to Taipei were booked full.
What happened next? The end of the story is here.
See more

Uni-Air did its job, which was to fly me on time to this dead end, with the same comfort, smiles and coffee as the previous time. This was the first week-end of 2012, a great year for adventures in that part of the world.

The airline with the best average rating is Uni Air with 7.1/10.