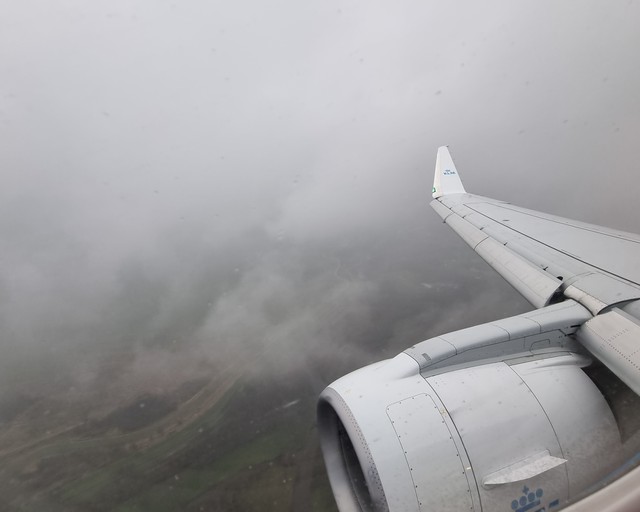 #27 out of 78 Airlines A minimum of 10 flight-reports within the past two years is required to appear in the rankings. 471 reviews

The day prior to my flight I received a phone call from our operation department that I would finish my flying duty in Stuttgart the following day early in the morning and that I would be able to go home. I kindly requested them to book me on the 9.45 AM flight rather than the 11.45 AM even though it would have been a tight connection (which became even tighter when the cargo of our flight was delayed. In the end however I had about 1 hour and 15 minutes to spare to catch my flight, but it was a good decision to do so as KLM canceled all of their flights to and from Stuttgart after the 9.45 AM flight due to Storm Eunice 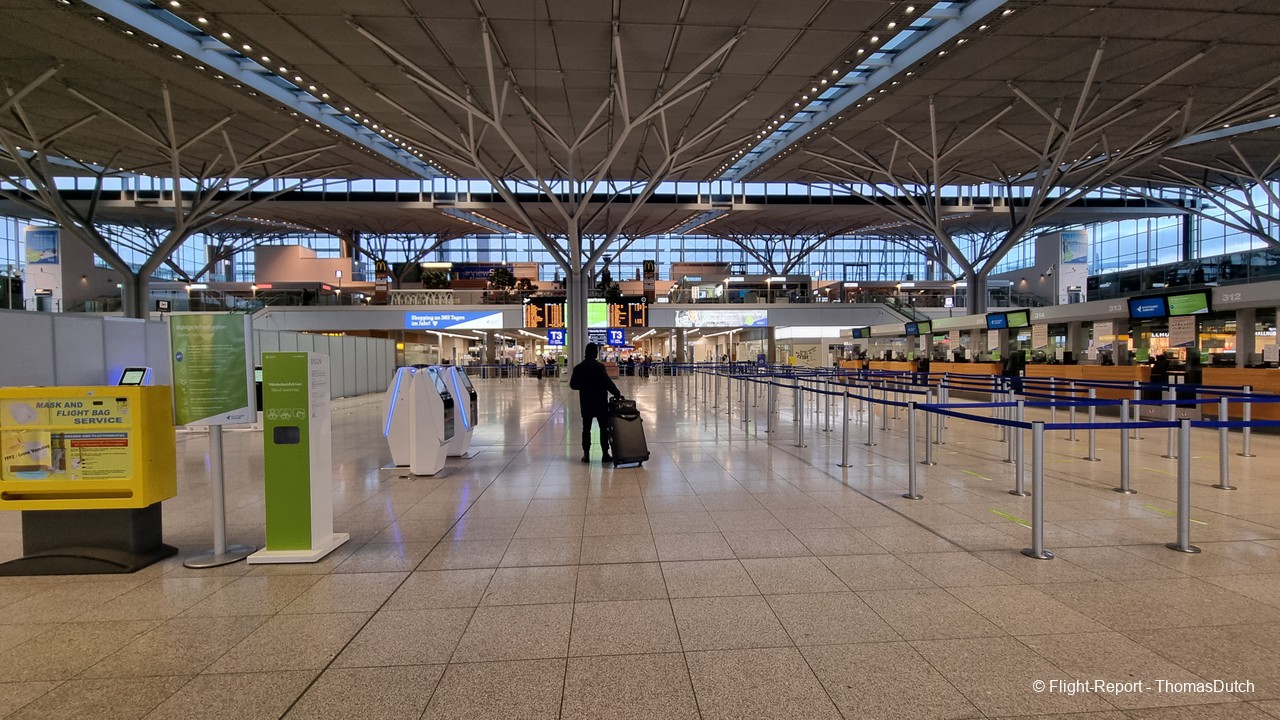 Check-in was in full swing with four counters being open to check us in and to drop off our luggage. Unfortunately check-in is not able to be done online as of yet due to the verification of our vaccination status. Ground staff was distant, cold yet efficient and it took about ten minutes to clear.

Before heading to security, I stopped by an apothecary to buy a mandatory FFP2 mask which is still mandated in Germany as I had none in my possession. Usually it is not enforced by most law enforcement agencies in Germany, yet in Stuttgart it was a hunting ground for those who didn't wear them. 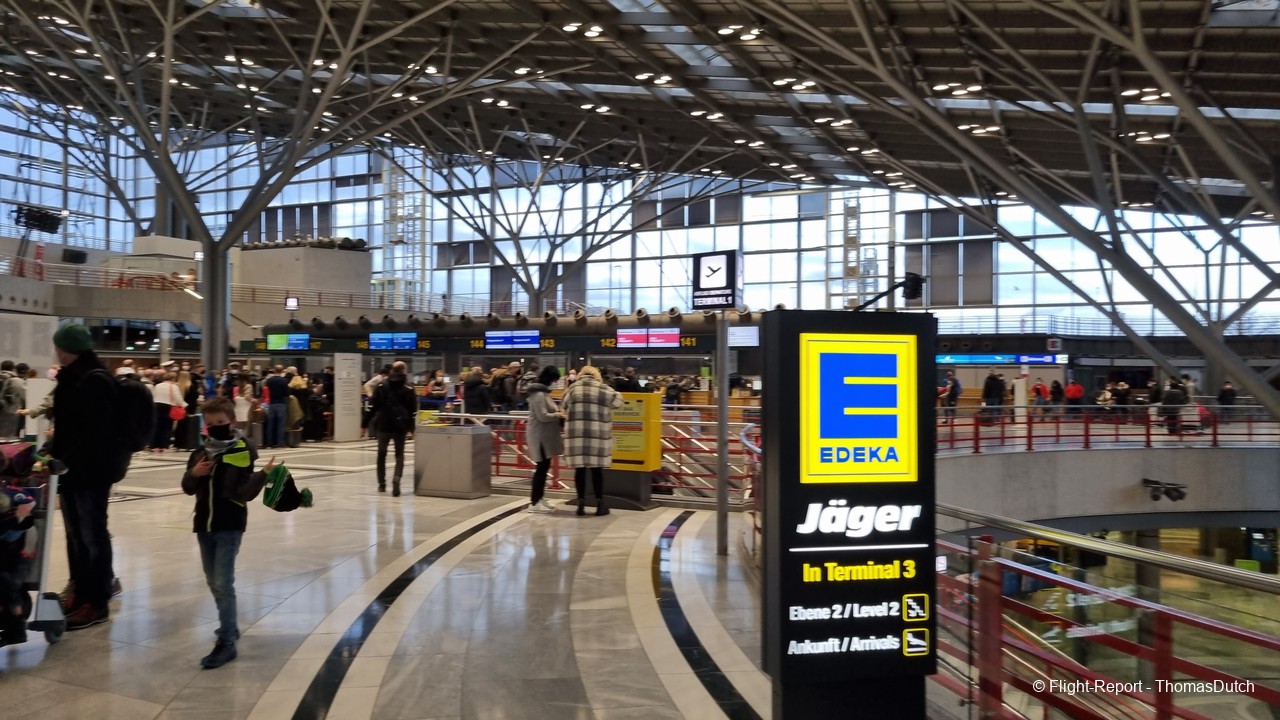 Security was quite busy and it took about 15 minutes to clear the security lane in Terminal 2 as the usual one in Terminal 1 was closed. 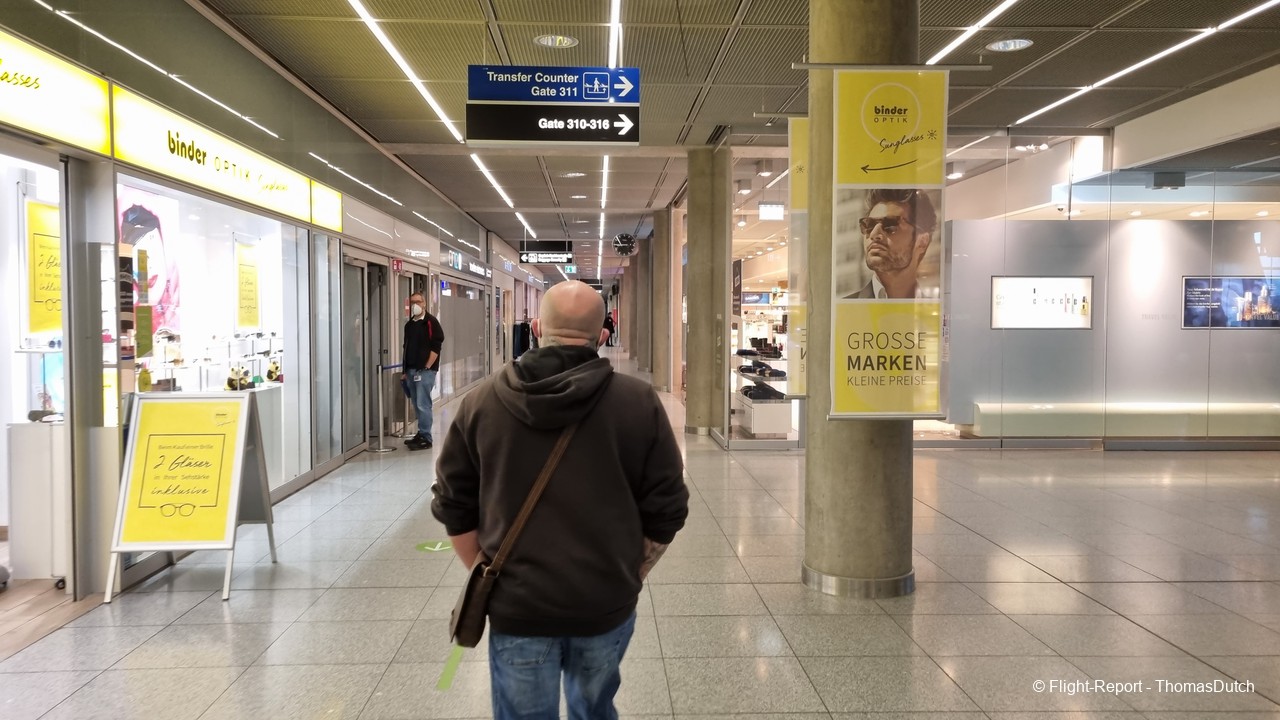 With about 20 minutes to spare to boarding, I decided to head to our gate rather than having a cup of coffee or so as all food stores were incredibly busy. Upon reaching our gate for today's flight, I saw this Eurowings A320 (D-AEWR) being pushed back for a flight to  Arvidsjaur (Sweden). 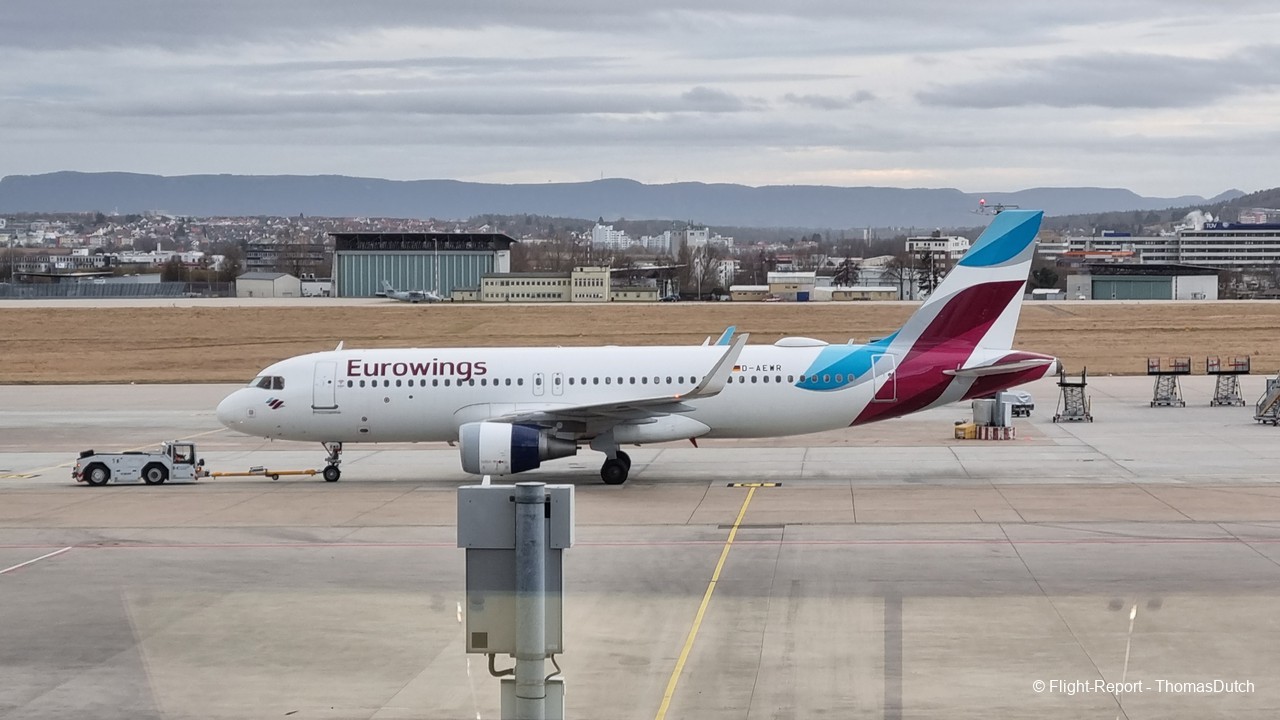 After the departure of the Eurowings A320, our aircraft pulled in to our stand. PH-EXH would do the honour of bringing us to Amsterdam. PH-EXH is a 5,7 year old (date of flying) Embraer 175 who has been solely in service of KLM Cityhopper and is powered by two General Electric CF34 engines with a load capacity of 88 people in a two-class configured cabin. 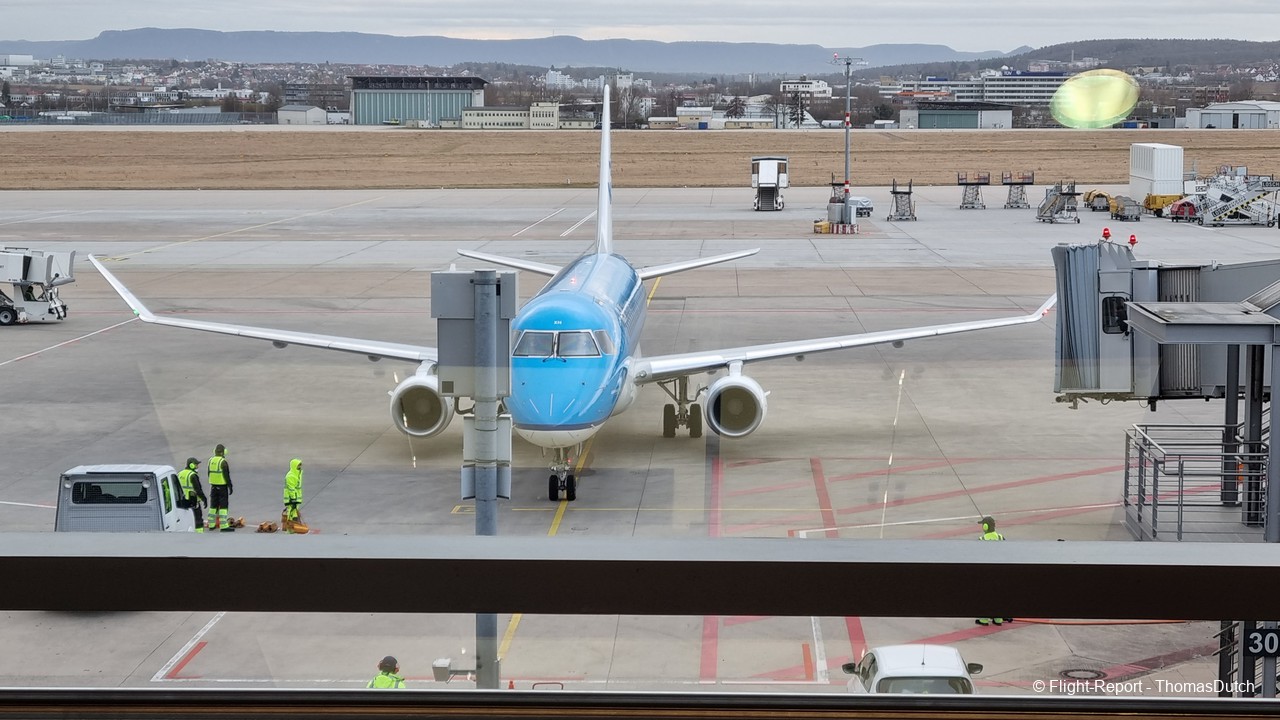 Boarding was called on-time and was done via zones which were strictly followed by ground staff. It also helped them that their boarding system denies those who tried to enter the aircraft while not being part of that zone. Upon embarking of the aircraft, we were kindly greeted by a friendly flight attendant and been given a wet wipe.

My seat for today's flight would be 5F, which is an Economy Comfort seat and comes with an additional legroom. Not too shabby I must say. 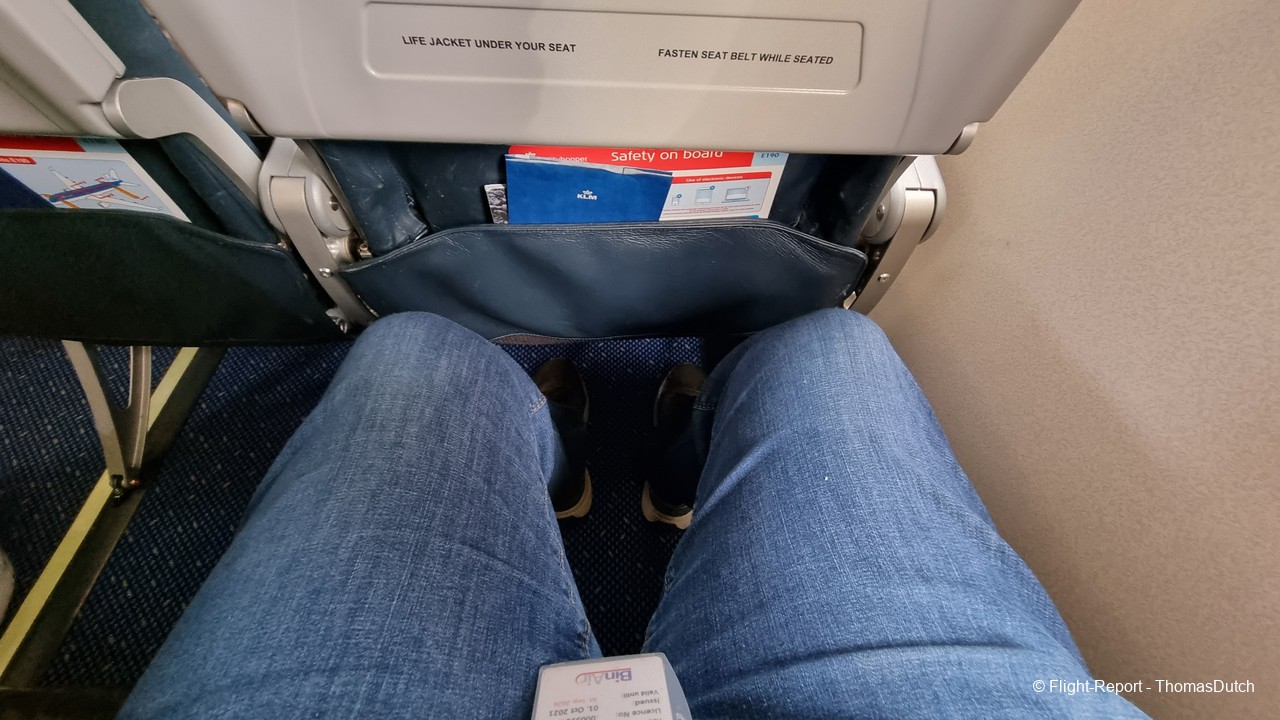 While the windows are not perfectly aligned with the seats, it definitely comes with a terrific view of the engine and the wing. 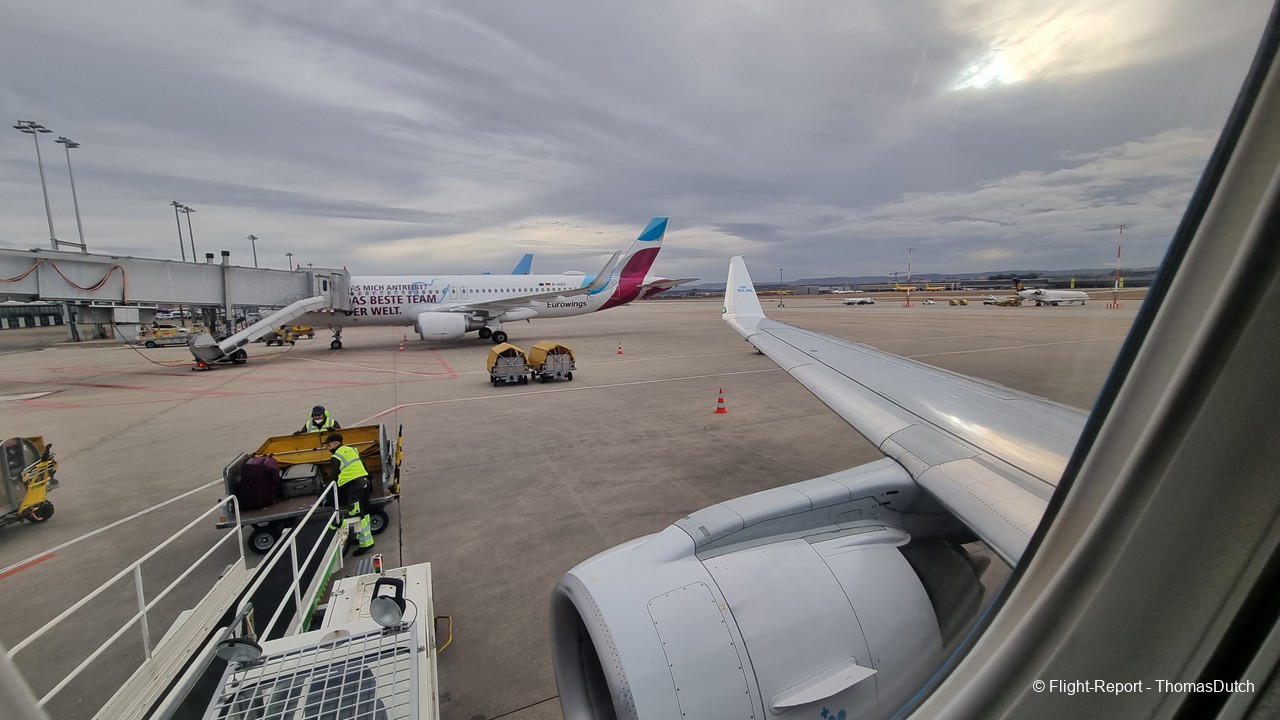 Next to our aircraft was D-AIZS, An Eurowings A320 with a special livery which would depart later in the day to Berlin. The livery is meant as an appreciation and thank you to their employers during the hardships of the lockdown regarding Covid19. A nice gesture of Eurowings. 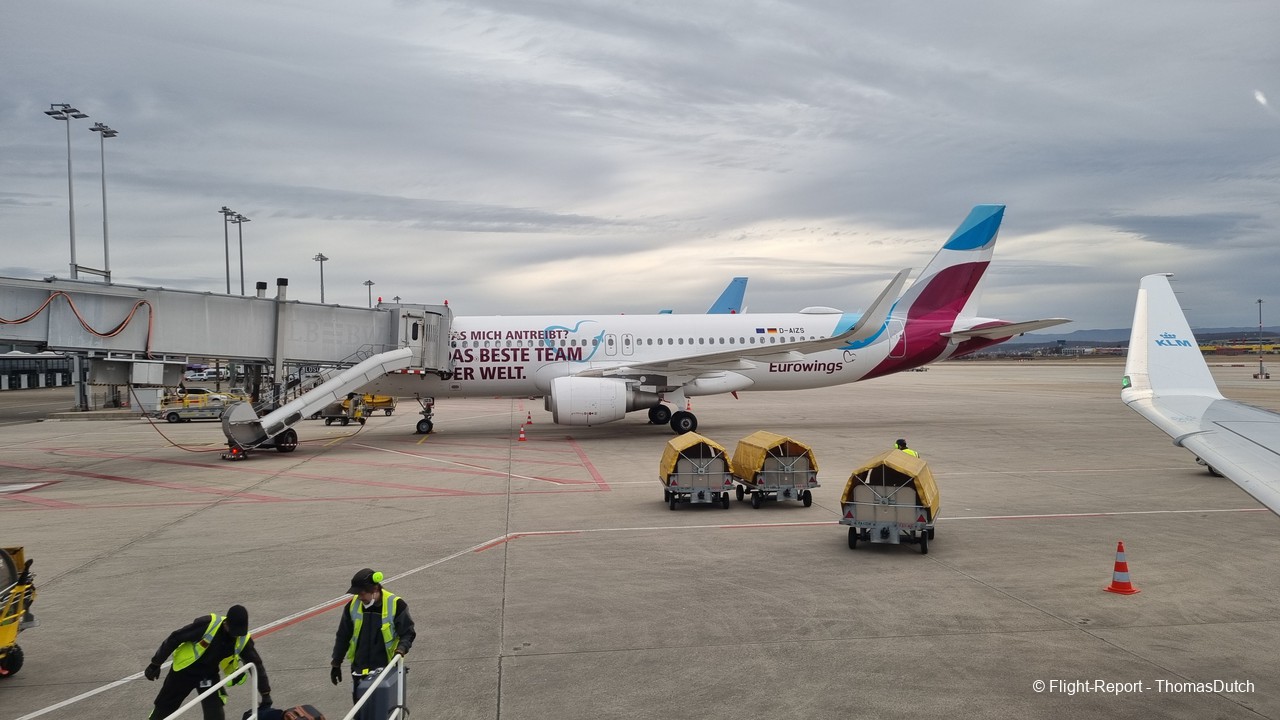 About ten minutes past our scheduled departure, we were airborne and it was apparent during the take off roll that we were very heavy as the aircraft needed a long take off run. Load was 100% in both economy & business class. Flight was already 75% full when I bought my ticket the previous day, but am sure that the cancellations of the other flights may have played an important role in the load either. 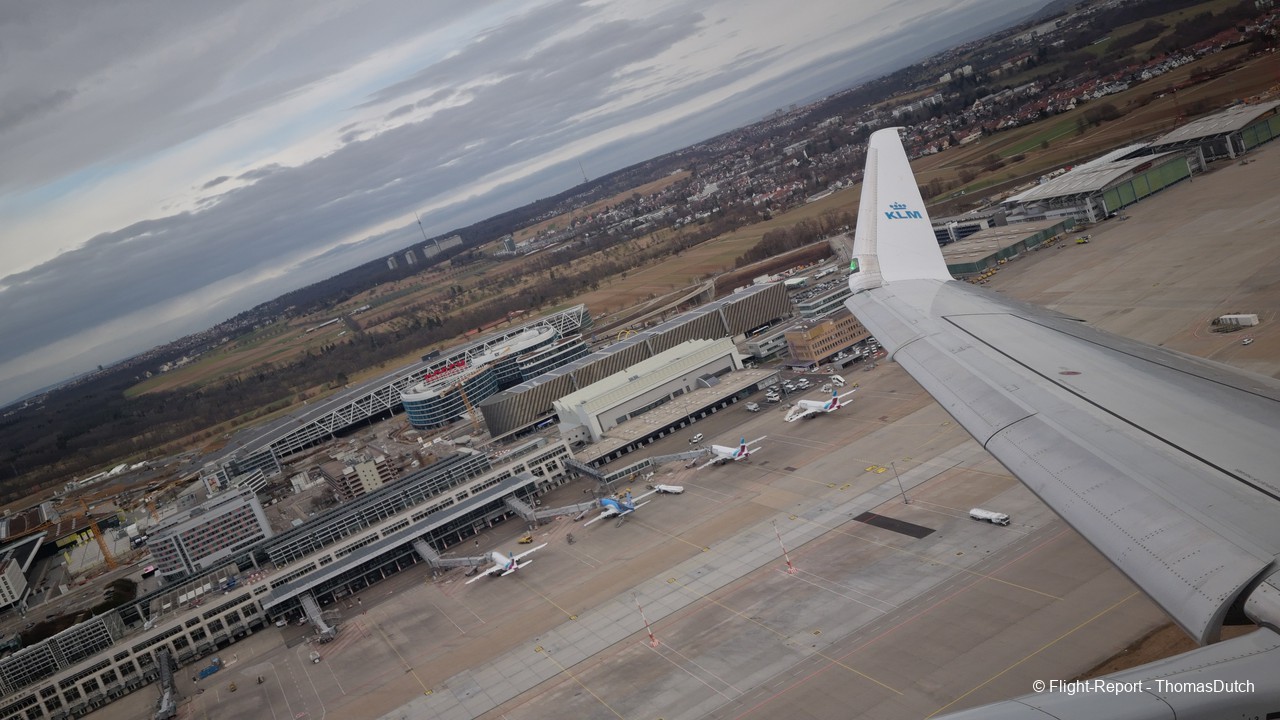 A right hand turn towards Amsterdam gave me a good opportunity to capture the last views of Stuttgart Airport. 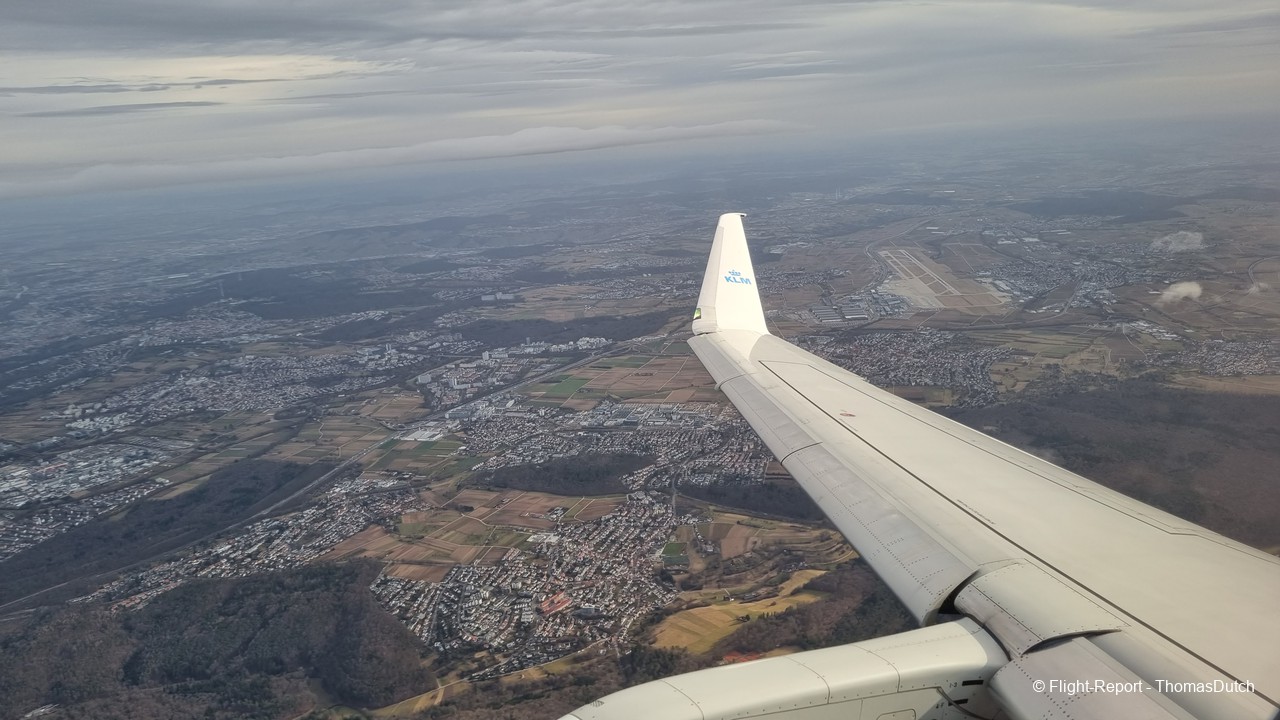 Literature on board contained of a safety card, sickbag and KLM's magazine Holland Herald February edition which had it's main focus on a Dutch painter Vermeer and spend quite a few pages on Athens as destination. 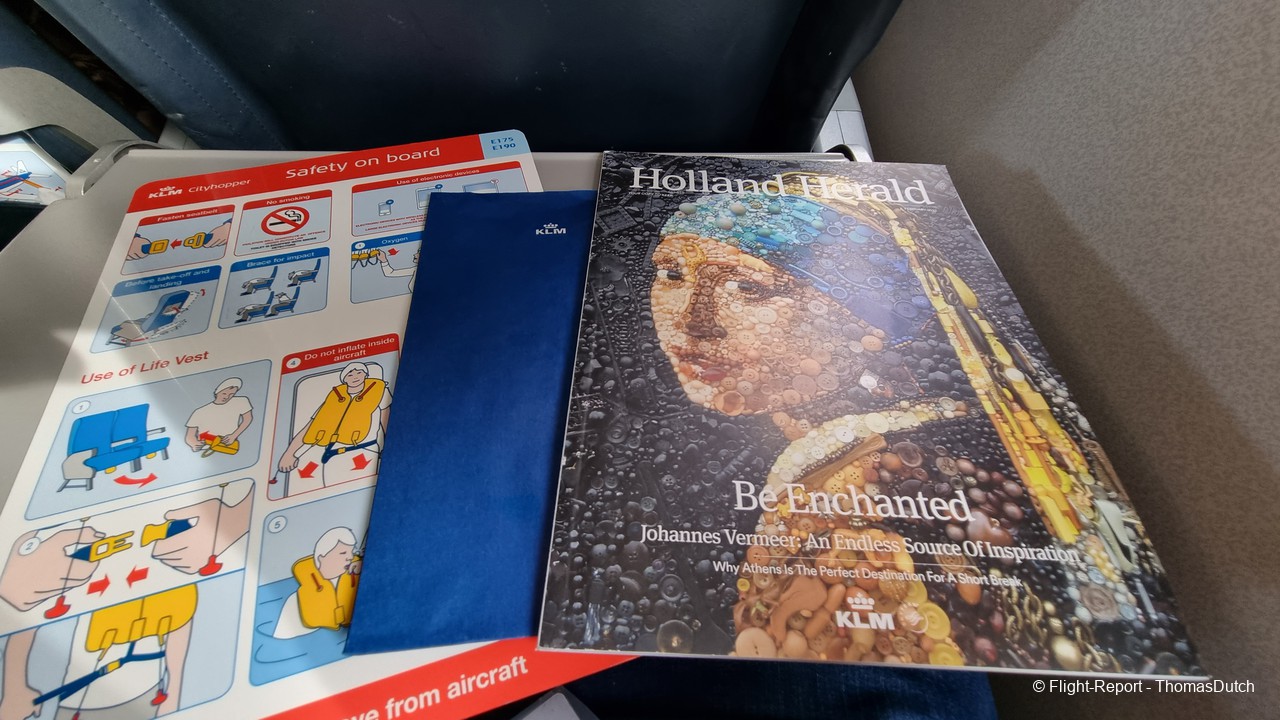 After approaching a safe altitude without turbulence, the flight attendants jumped into action to provide us with a complimentary snack & drinkservice. Can't say that I never get bored of the views you get up there. 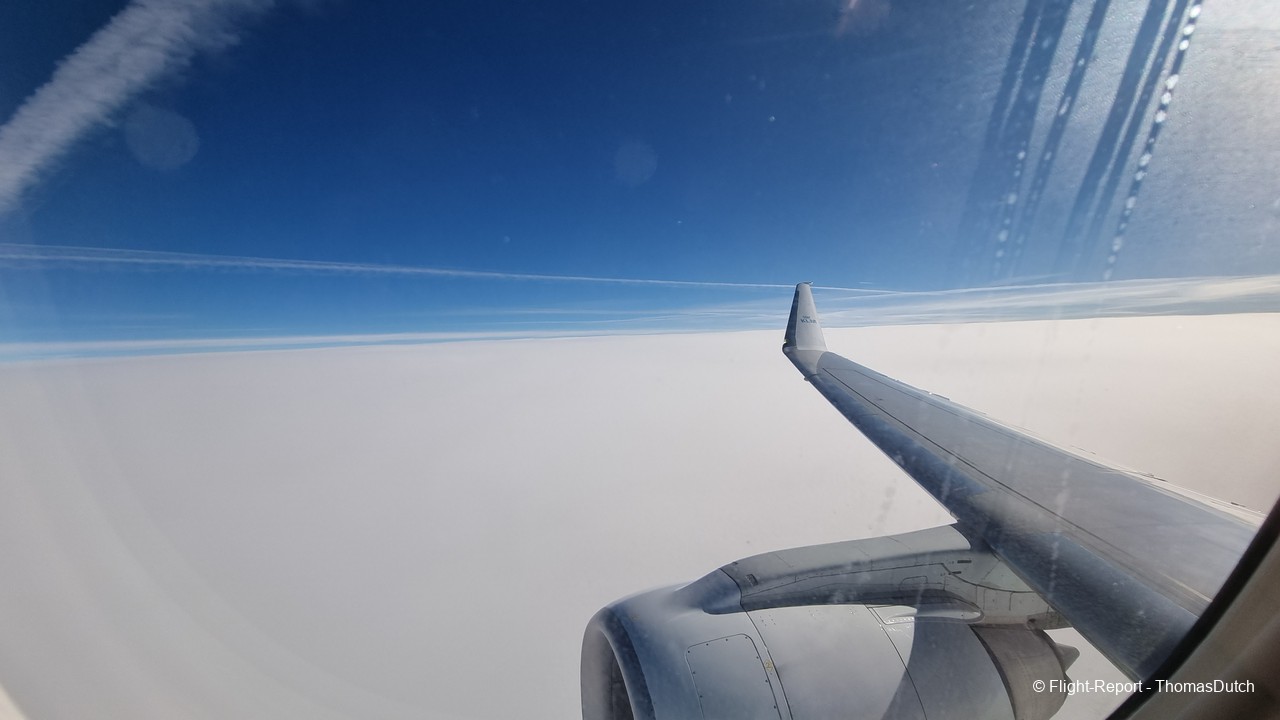 Twenty minutes into the flight, the cabin crew engaged in their service and it took another 5 minutes for her to reach my seat. She handed me an oatmeal cookie and asked what I would like to drink. I asked for a Coffee with creamer and she replied if I'd like to have an extra drink next to it. I kindly asked for a cup of water and was handed both drinks. 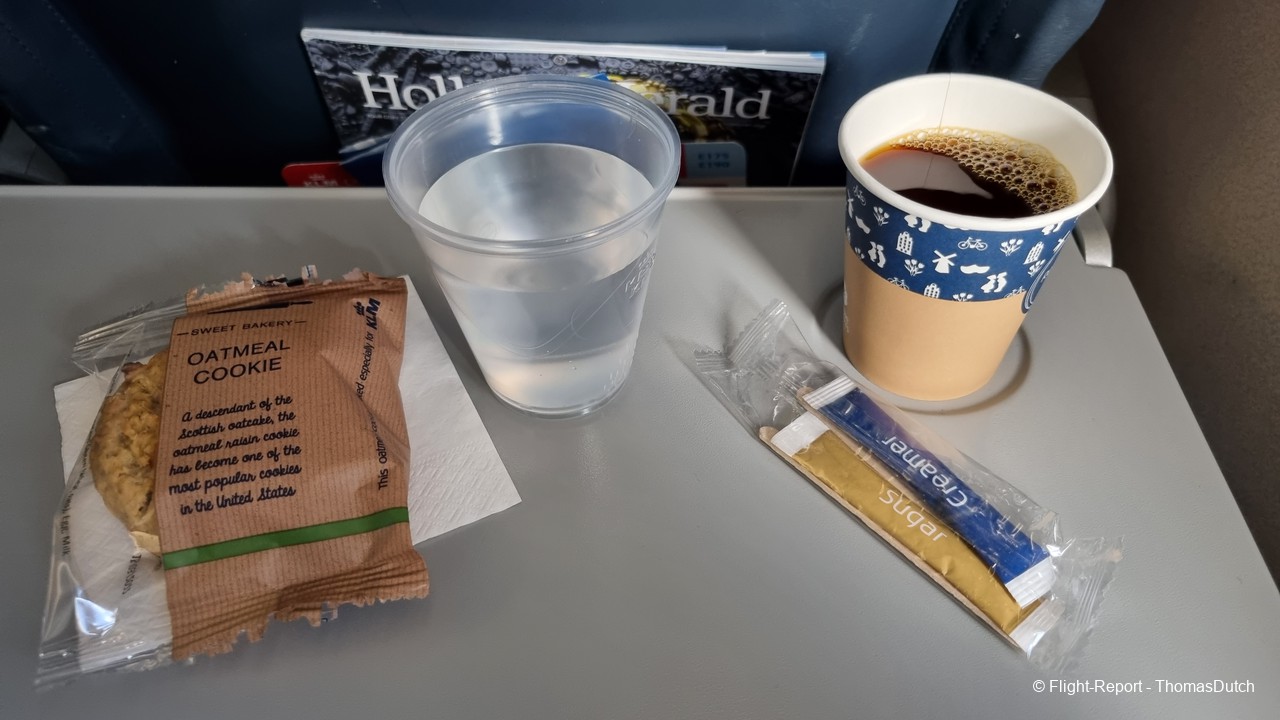 While the photo does not do justice, the oatmeal cookie was quite good and filling. Definitely one of their better snacks I've had in the past year with KLM Cityhopper. 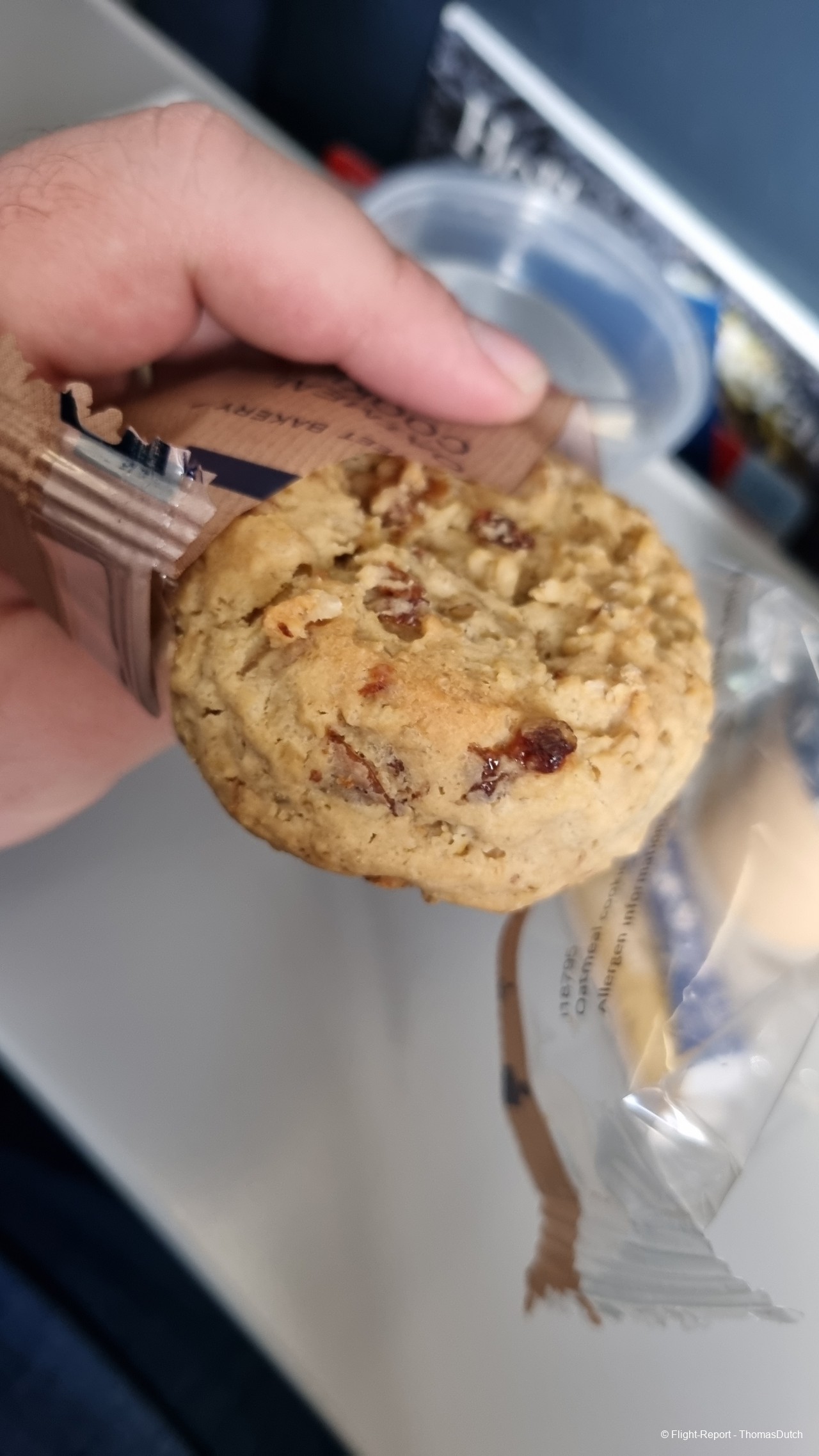 Business class was sealed off by curtain 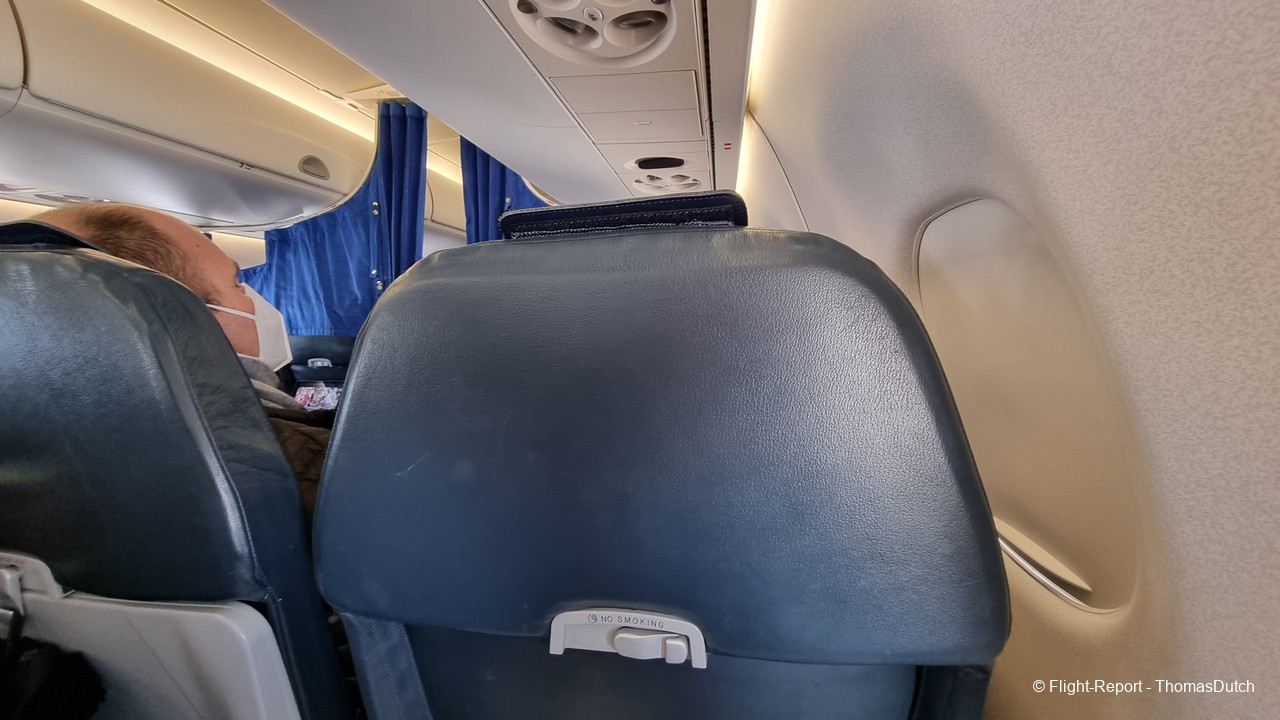 By the time they came back again to clean up, the aircraft was already approaching Amsterdam with the co-pilot checking in with us to provide us with a weather update and to thank us for flying. He ended his announcement with an ironic sentence regarding the ''beautiful'' weather in Amsterdam. 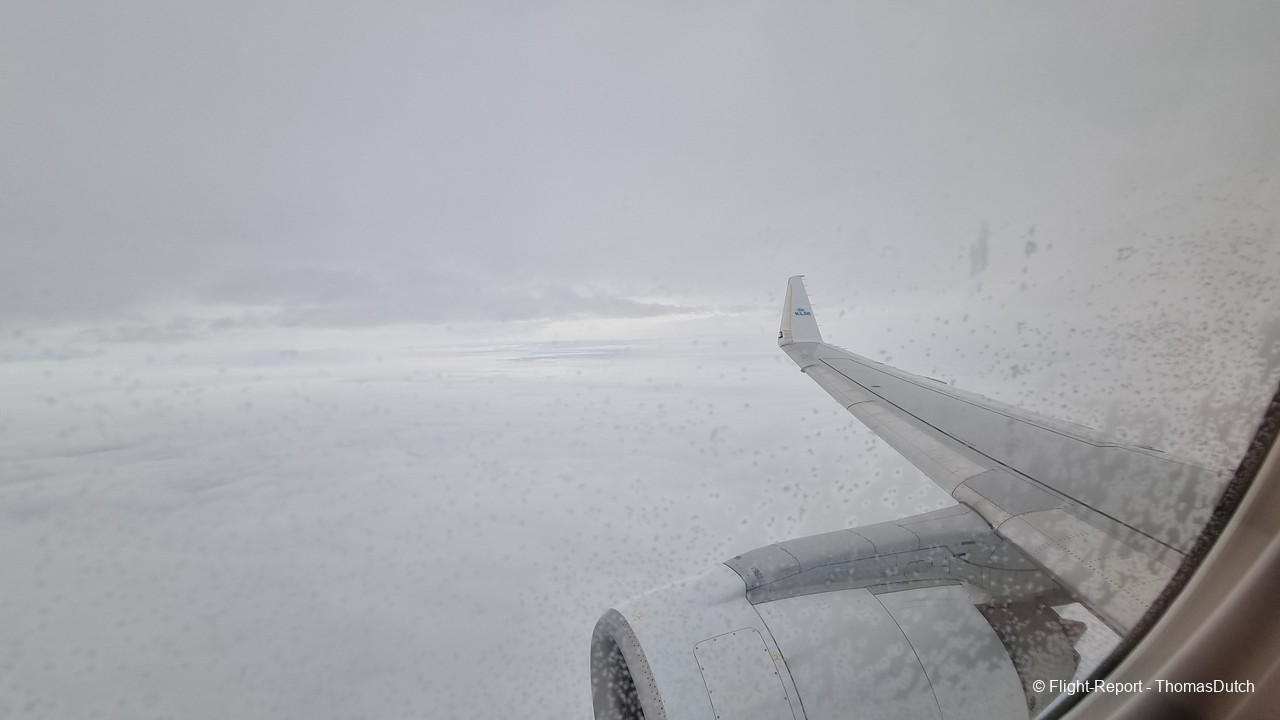 Cabin Crew was told to be seated about 10 minutes prior to landing as it would be quite a bumpy approach with gusts over 45 knots already. Definitely not a day for flying if you have fear of flying as it's been a very bumpy approach all the way to touchdown. 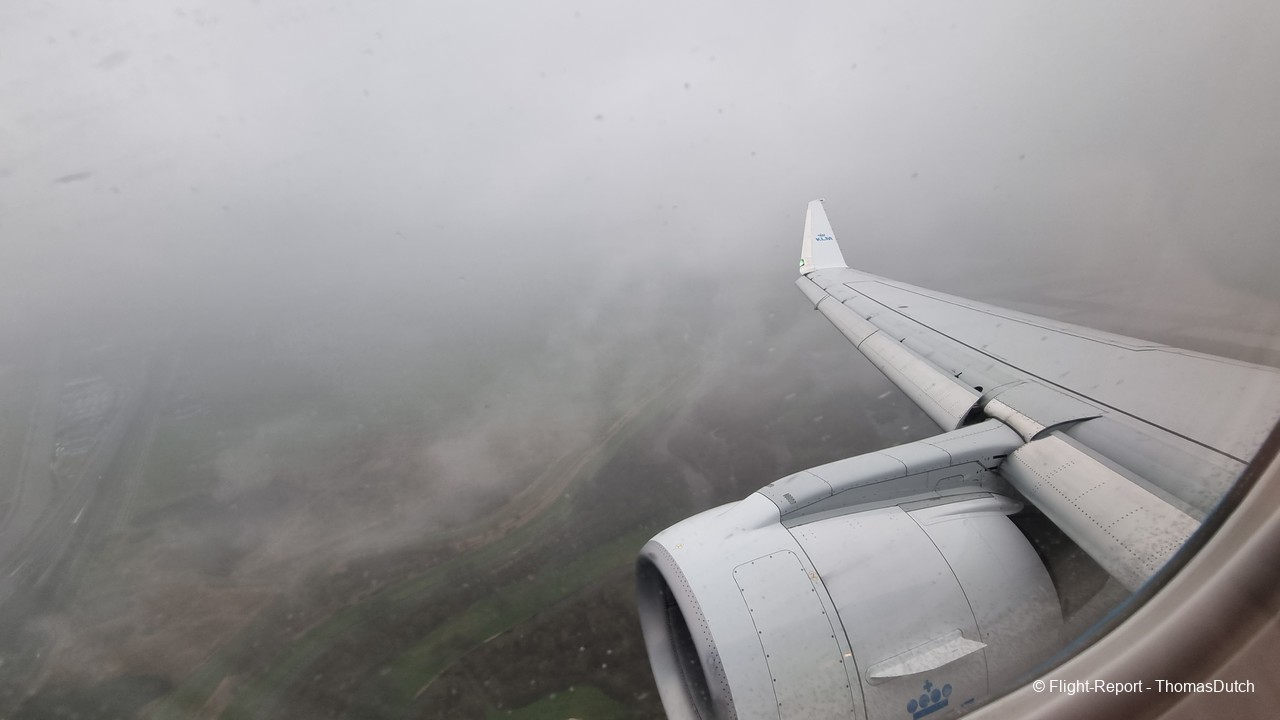 While the approach to Runway 18C has been nothing but smooth, the landing was perfectly done by the pilots and was smooth. 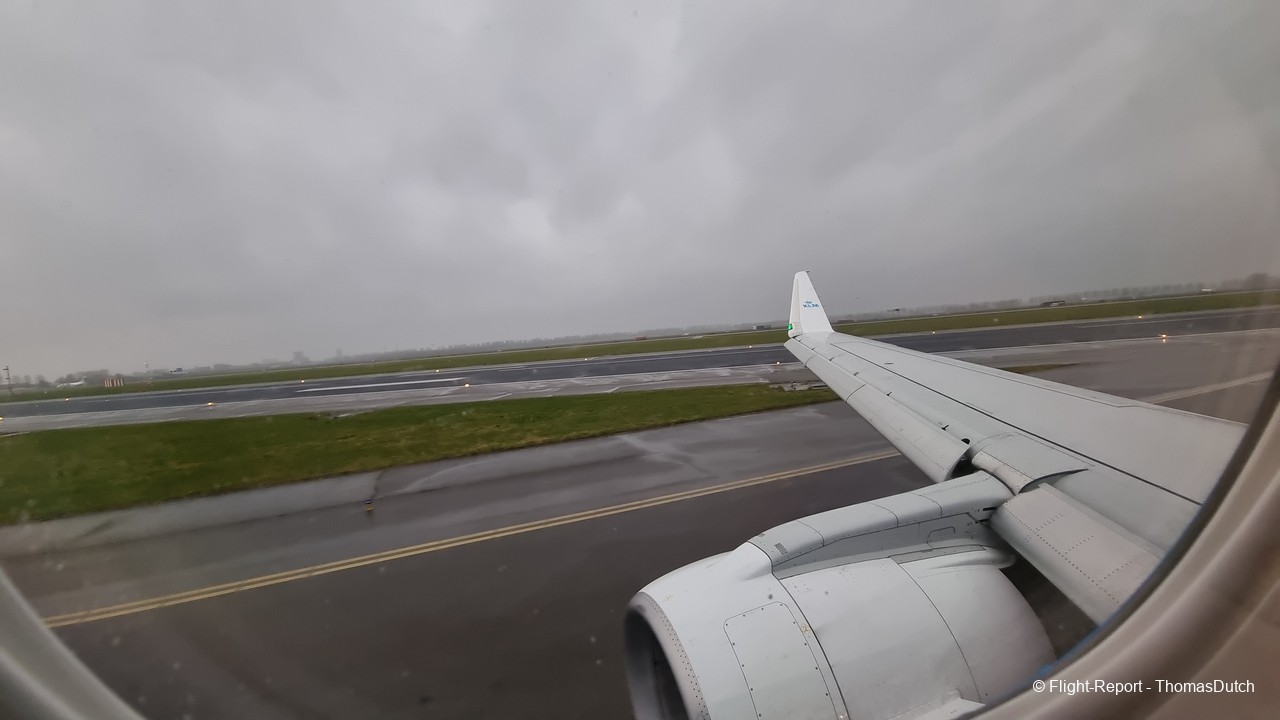 The taxi to our stand took not more than five minutes and luckily our parking stand was at the B-pier given that it would pour down like crazy in the following minute. 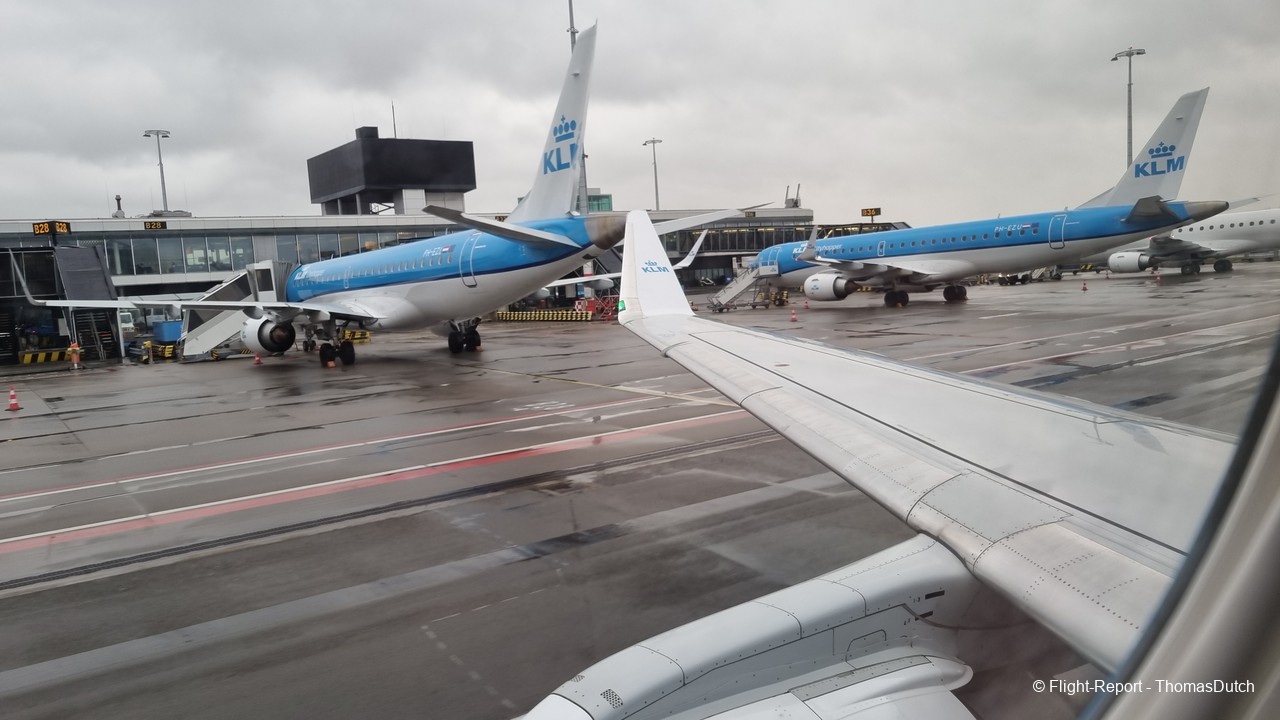 Last view of our aircraft. 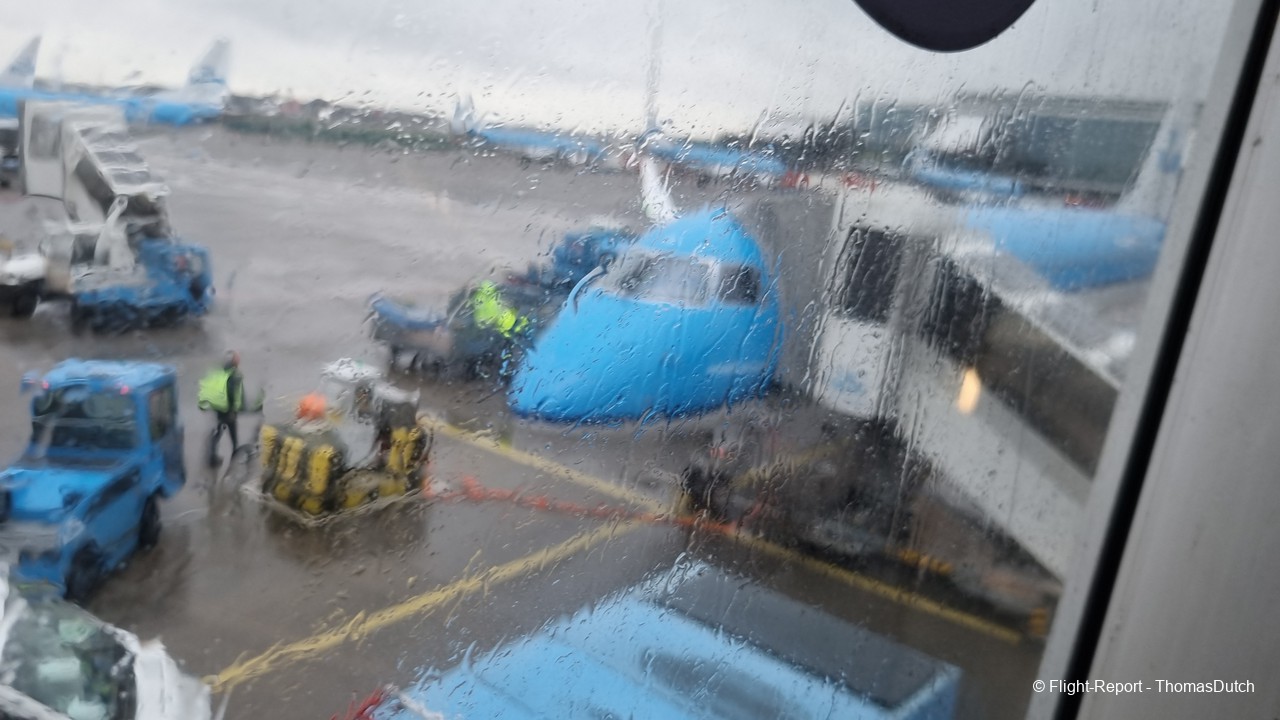 On the way to baggage claim, I spotted this Airbus A320neo (EC-NFZ) of Iberia in an OneWorld livery which just pulled into stand after a flight from Madrid. 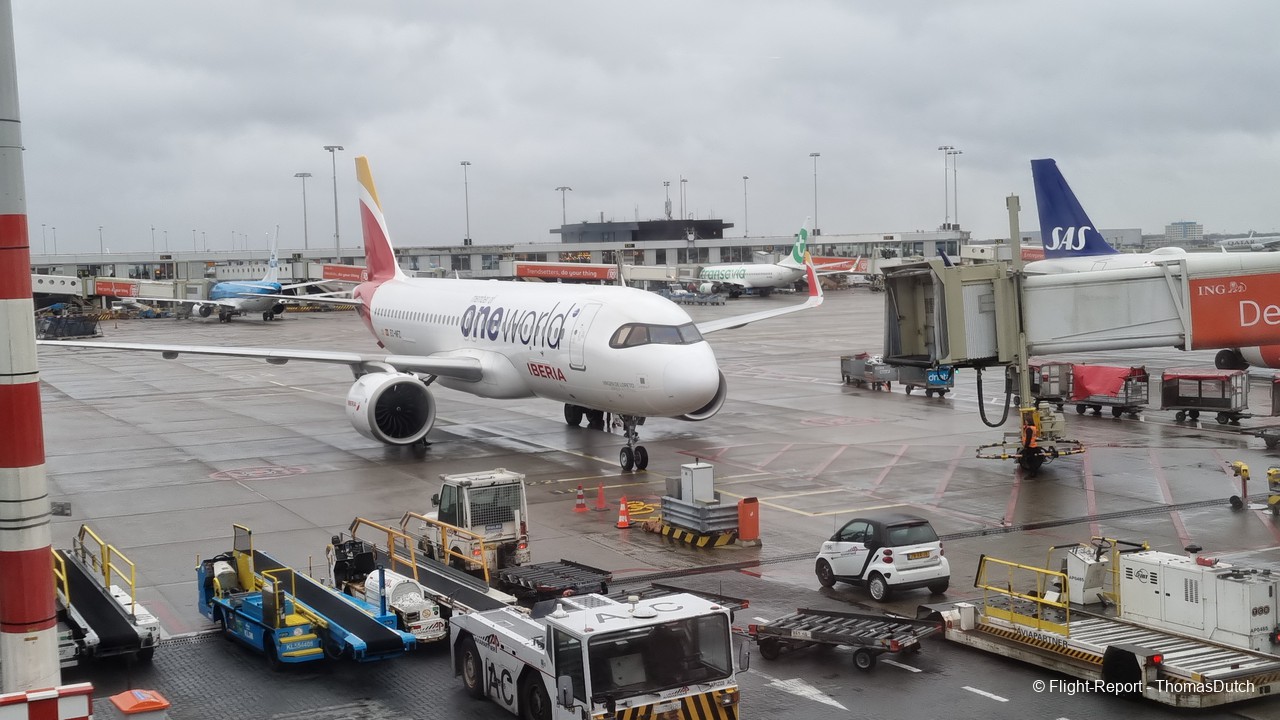 It's quite a distant walk from the B-pier to baggage claim and by the time I arrived to our baggage belt, it took only a few minutes for my bag to arrive. I, however was quite shocked about a very long line for KLM's transfer desk due to their cancellations and that line could take easily hours to be cleared…

Once I got my bag, it was time to rush to home as I needed to be home before 2 pm as most public transport companies in the Netherlands canceled their rides after 2 pm due to Storm Eunice. I literally got on the last bus to home. 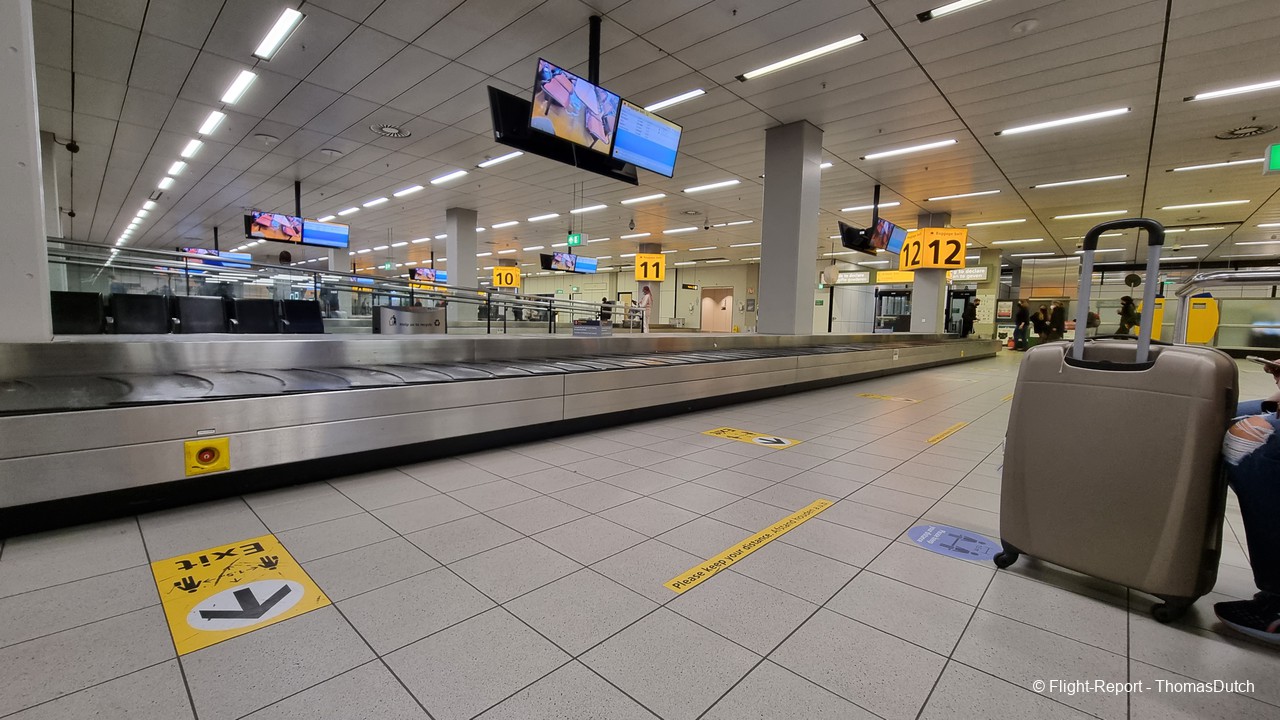 Thanks for stopping by!

A short & standard KLM hop over to Amsterdam prior to Storm Eunice with decent legroom and excellent cabin crew. Meal was better & more filling than my previous experiences with KLM to Munich as well as Berlin in previous year. Stuttgart was efficient and so was Amsterdam, however Amsterdam's cleaning standards are worsening by the day.

The contributors of Flight-Report published 24 reviews of 2 airlines on the route Stuttgart (STR) → Amsterdam (AMS).

The average flight time is 1 hours and 22 minutes.